PRELUDE
We are at it again!
Almost a year after our cycling trip to Japan (... see Cycling Japan 2013), we are having a go at cycling overseas again. This time it's down to the south, to scenic New Zealand. 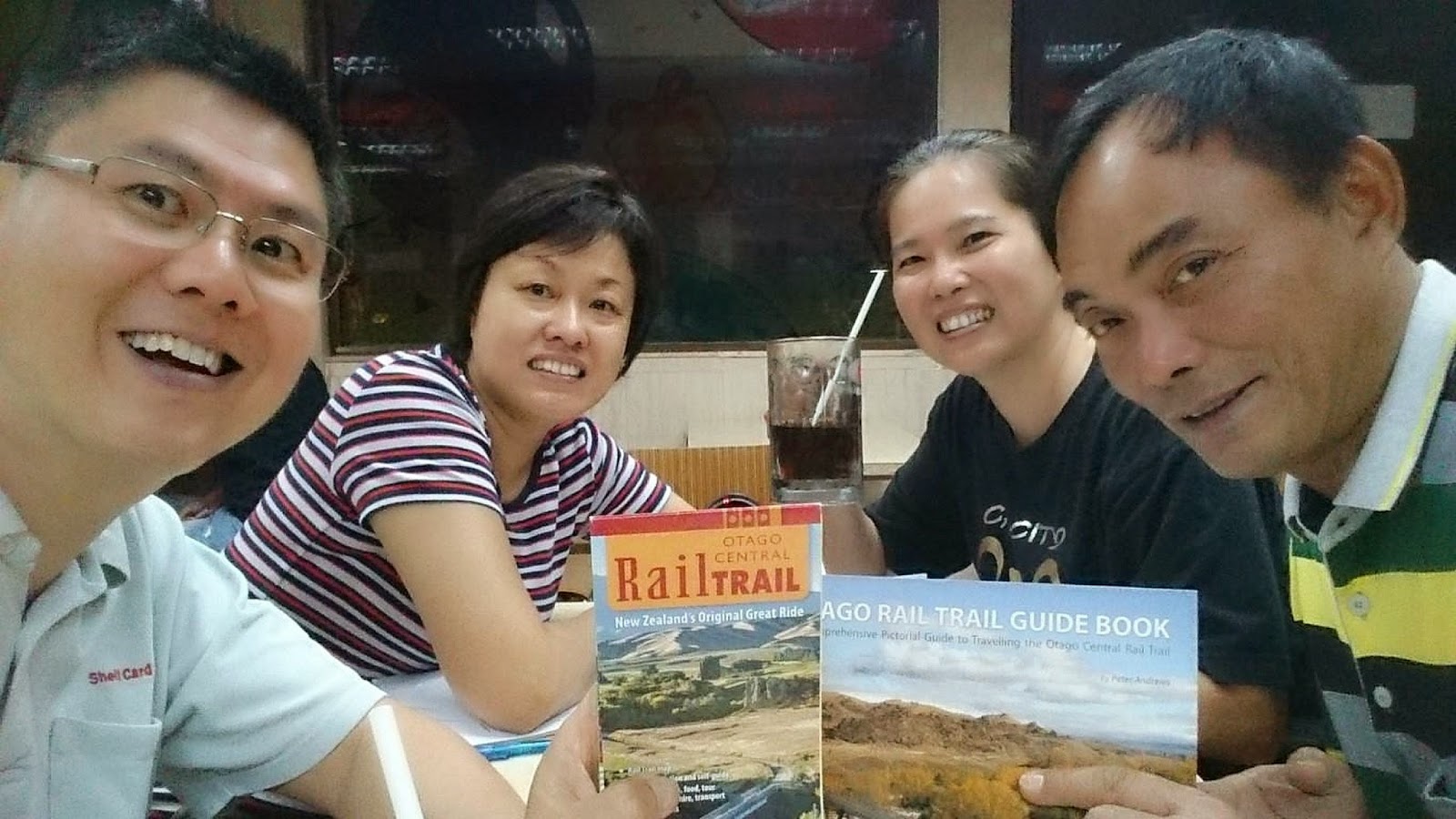 Unlike Japan, our trip in New Zealand will be a longer one (up to sixteen days) and would involve more travelling from town to town; staying a night at most places and a couple of nights at some. The distances between the towns are far and we will travel by a hired van for the main part. For the last week, we did away with the van as we will be cycling more and travelled by rail and buses for the longer distances. Because of this more complex logistics, Andrew (our ride leader) reduced the team to four persons, and am I glad that Andrew invited me to join them.
Preparation for the trip started almost a year earlier. To get better fares, air tickets form AirAsia, Jetstar and Virgin Australia were bought early too. We met regularly at our planning haunt, the A&W drive-in at Petaling Jaya.
We each had a role to play: Andrew will be leading the team and will make final decisions on destinations and cycling routes. Siew Yung was the researcher, researching places to stay, interesting cycling routes & destinations, etc. Hui Min was the chef (we will be doing a fair bit of cooking as eating out in NZ can be expensive). Me? I got the easiest role, I was the "Transport Minister" arranging for hire of the van (and being a blogger, was also the unofficial archivist).
Both Andrew and Siew Yung got the Garmin 800 which will help us get our directions right while we are cycling & driving there. 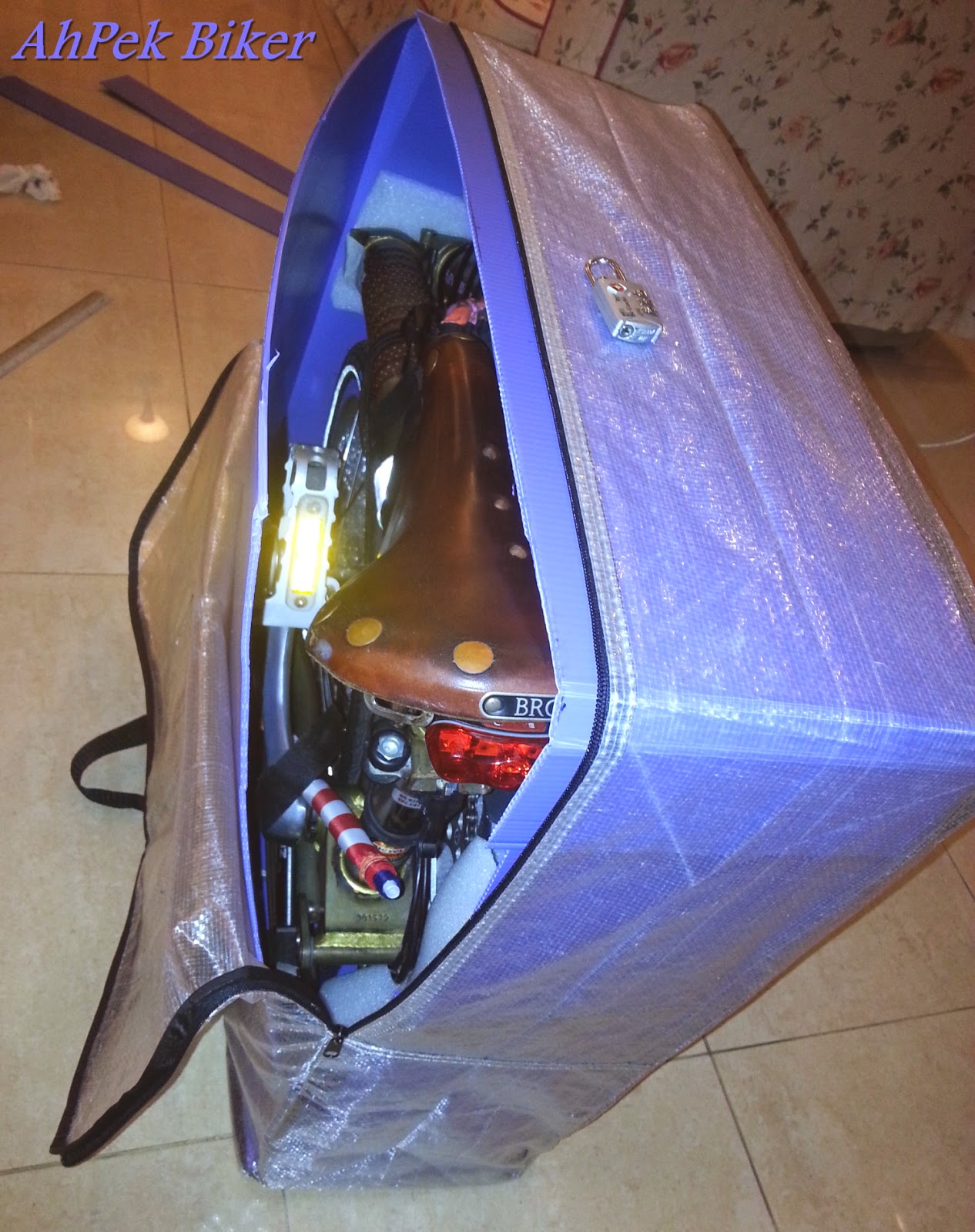 This time round when packing our Brompton bikes into the Ikea Dimpa bags to be checked into the planes, instead of using cardboard for protection, Andrew had the idea of using corrugated plastic sheets called Impra Boards (those used for small advertising light boxes, these can be purchased at most stationeries shop). The plastic sheets were much stronger and unlike cardboard they did not break at the packing pressure points, i.e. near the left pedal and the handle bar on the right. 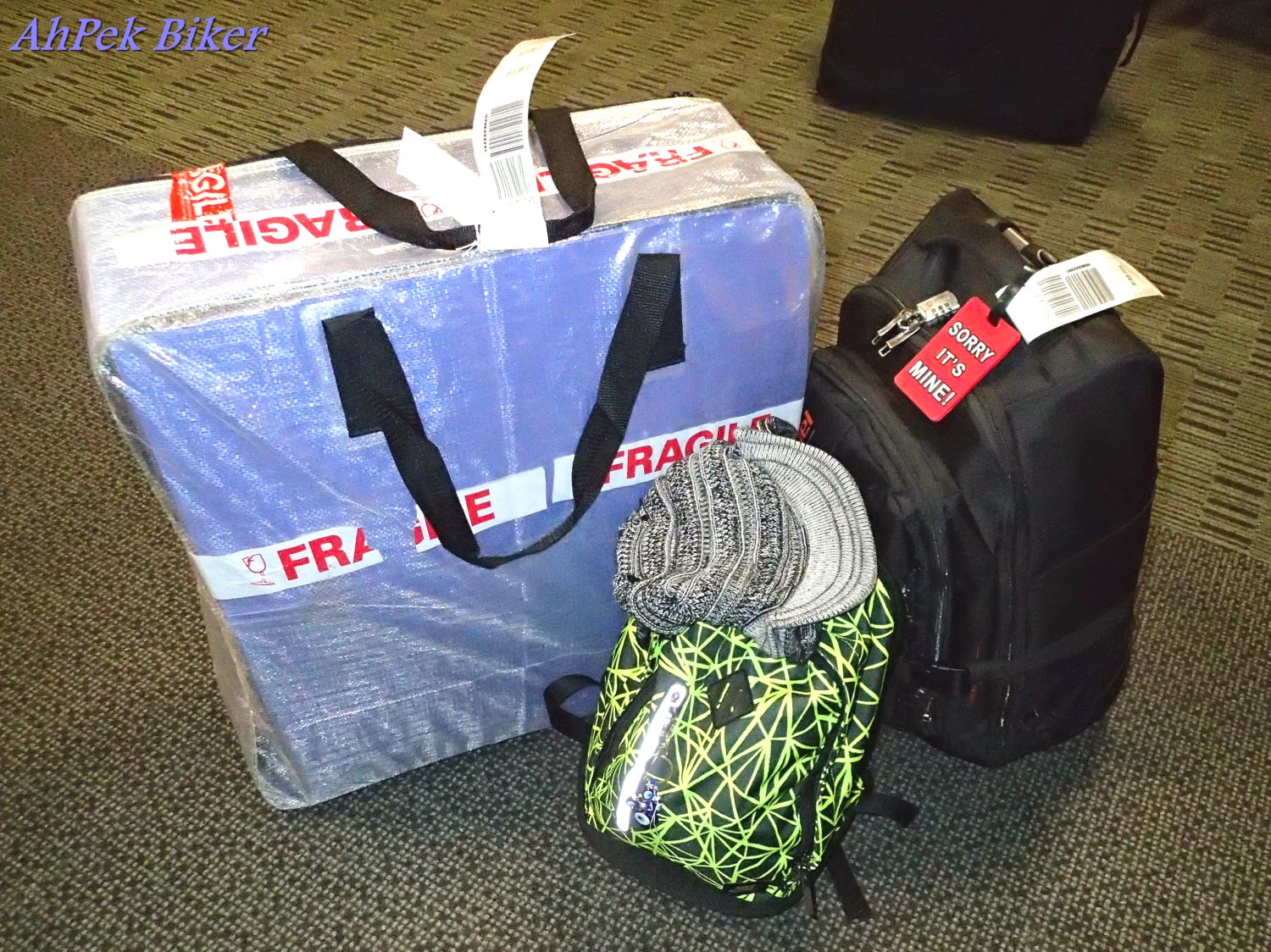 With these sheets, our bikes were packed neatly. Also the Australian & New Zealand Customs were strict on dirt and mud being brought into their countries. The plastic sheets were cleaner and more hygienic than cardboard. And of course we did a thorough cleaning of our bikes before packing. For note, Siew Yung used a Vincita B132B bag to pack her bike & a Vincita B206B Garment Bag for her luggage. The garment bag fits into the spare space of the bike bag for a all in one transport solution.
Unlike Siew Yung, the rest of us packed our luggage separately. Andrew and Hui Min used the Brompton T-Bags, while I opted to use my trusty roller-wheeled back-pack. Packed into this large back-pack was the Mini O bag for day-to-day use. I also brought along a smaller light back-pack as cabin luggage and for day-to-day use, to complement the Mini O bag. 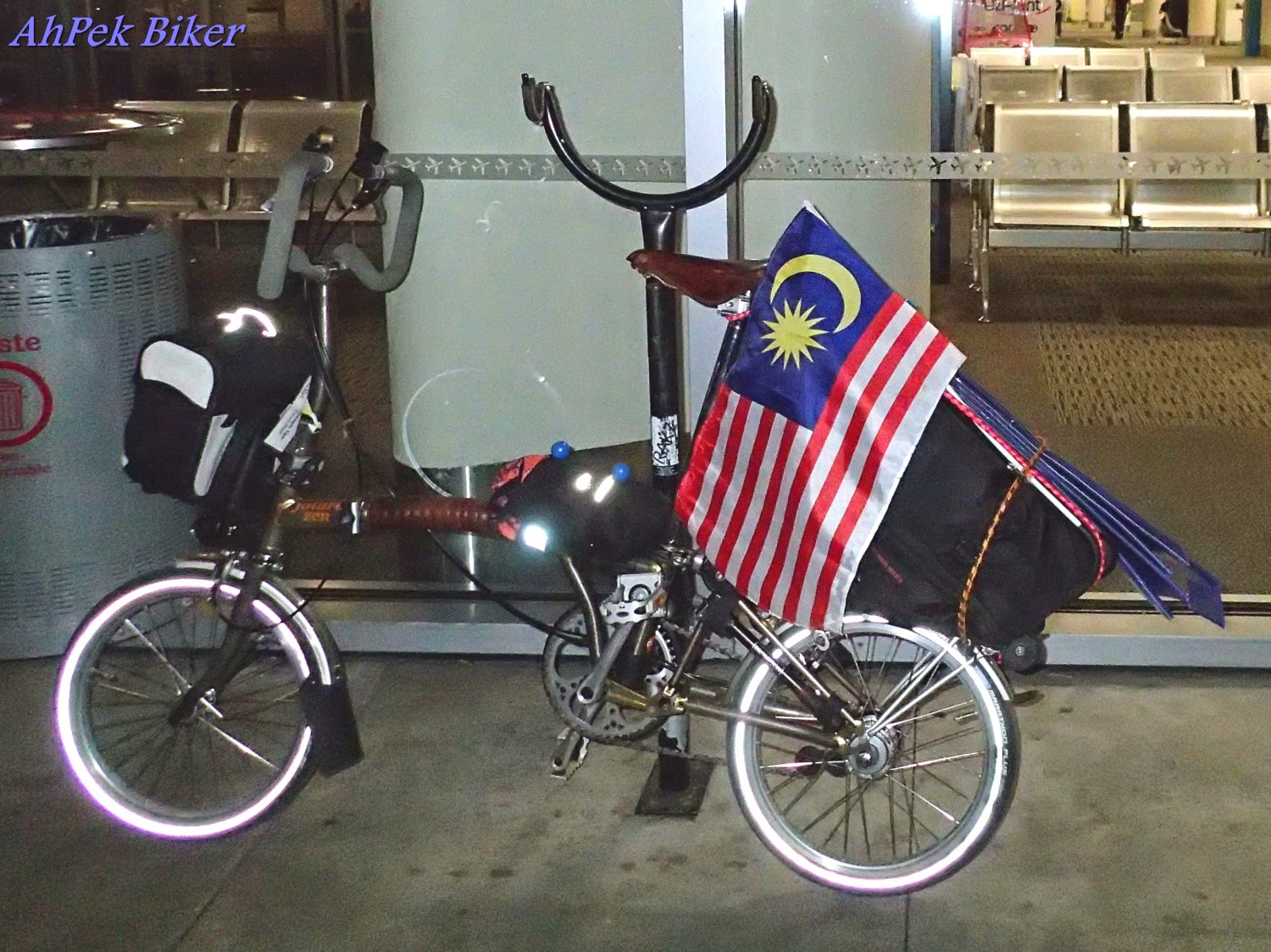 With a part-way slit down their lengths these plastic sheets can be easily folded and carried along as seen in photo above.
My large back-pack was strapped to the rear carrier with three bungee cords. A longer one going around the seat post, running lengthwise and hooked to the carrier. Two shorter ones ran width-wise and hooked to the carrier too. The whole assembly was very secure even though at times the back-pack with its contents weighed up to 15 kg.
Fifteen kg.!! Was I crazy to over-pack and lug along such a heavy load. No, to save cost from eating out often; while in NZ, we later bought stuff such as rice, vermicelli, etc. for cooking. Most of this was stuffed into my back-pack. See.... I was a good Transport Minister. 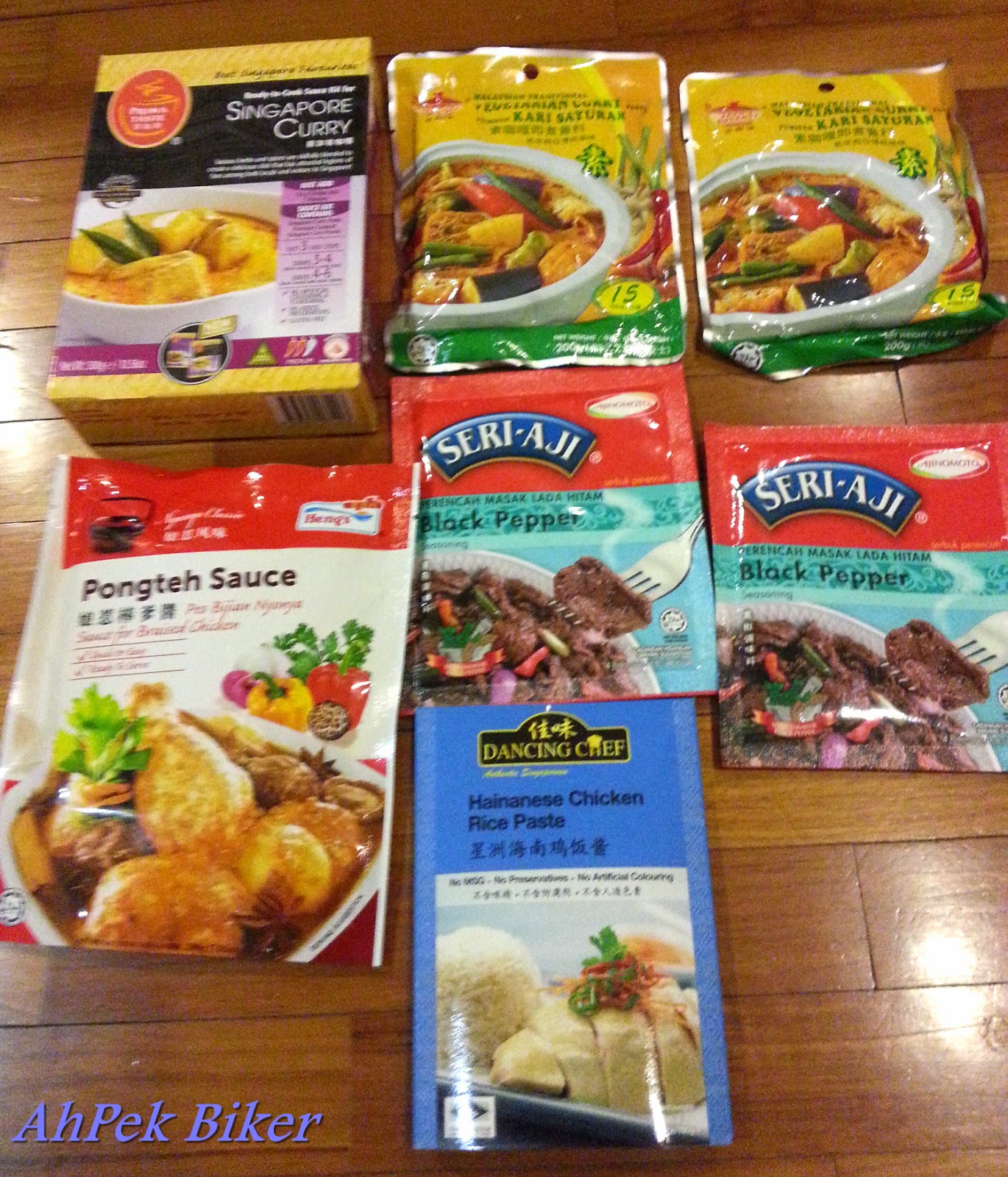 To simplify our cooking, we brought over from Malaysia cooking pastes, instant rice and instant mee.
Guess who carried these - yup, you are right; the trusty ol' AhPek aka the Transport Minister  *smiles*

Below are the blogs on the individual days of our trip. Click on the relevant photo to go to the respective blog. Hope you will enjoy them *smiles*.