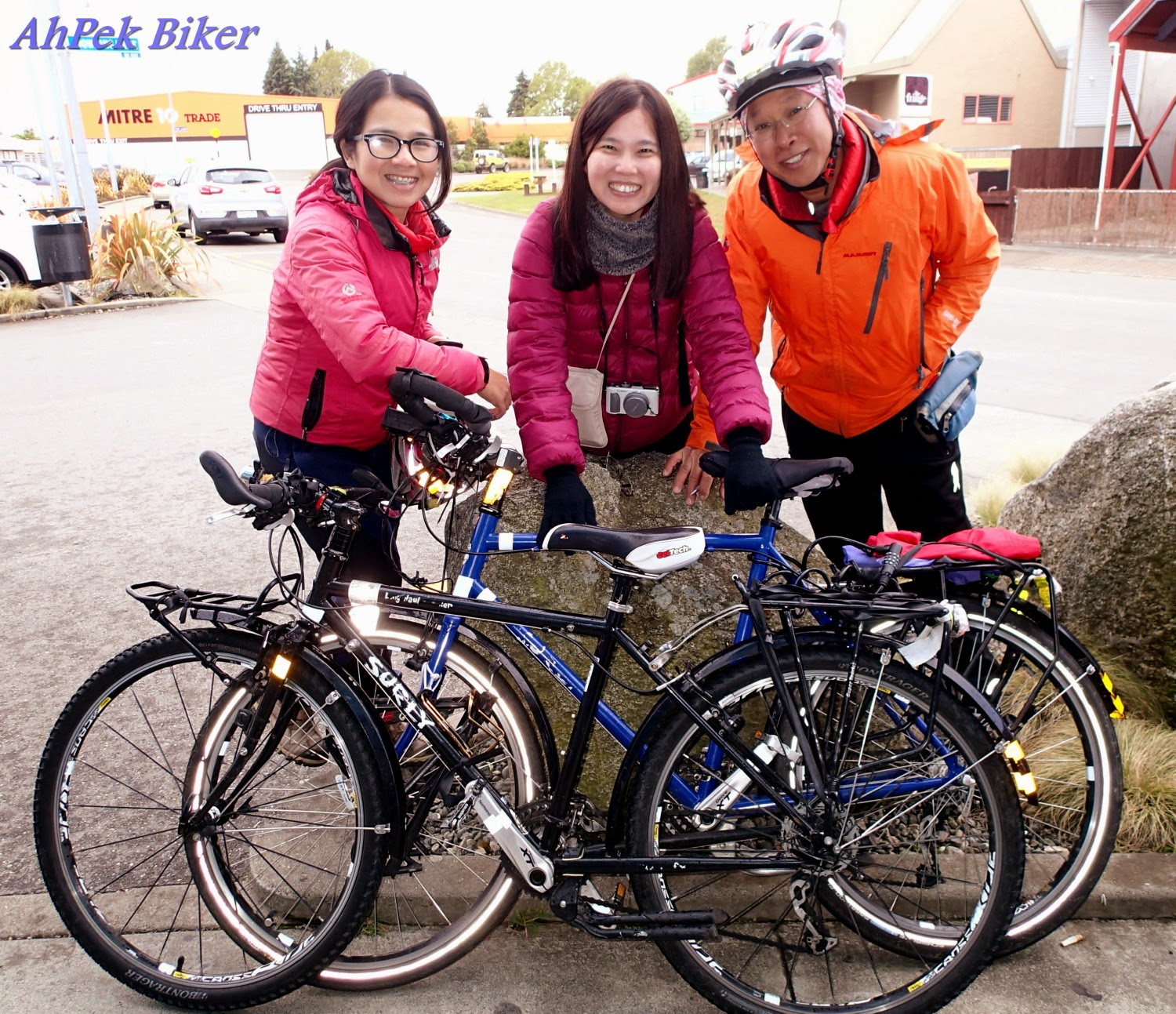 Queenstown & Te Anau, New Zealand : 19th November 2014
Small Group Ride - Road Trip Queenstown>Te Anua.
It's another road trip again today, this time a drive of 170km from Queenstown to Te Anua.
You must be thinking "Huh? Drive again? Aren't you guys suppose to be on a cycling tour?"
South Island is fairly big and this is the first time that we are here, so we would want to see as many places as possible. South Island is also quite mountainous and they are not many roads crossing those tall mountains. Two places may look close, almost next to each other on the map, but to get to between these two place could mean a trip round the mountains! So please excuse us if we did drive around a fair bit as we did not have that much time to do a full cycling tour.
But today we met a couple who did really cycle around NZ. 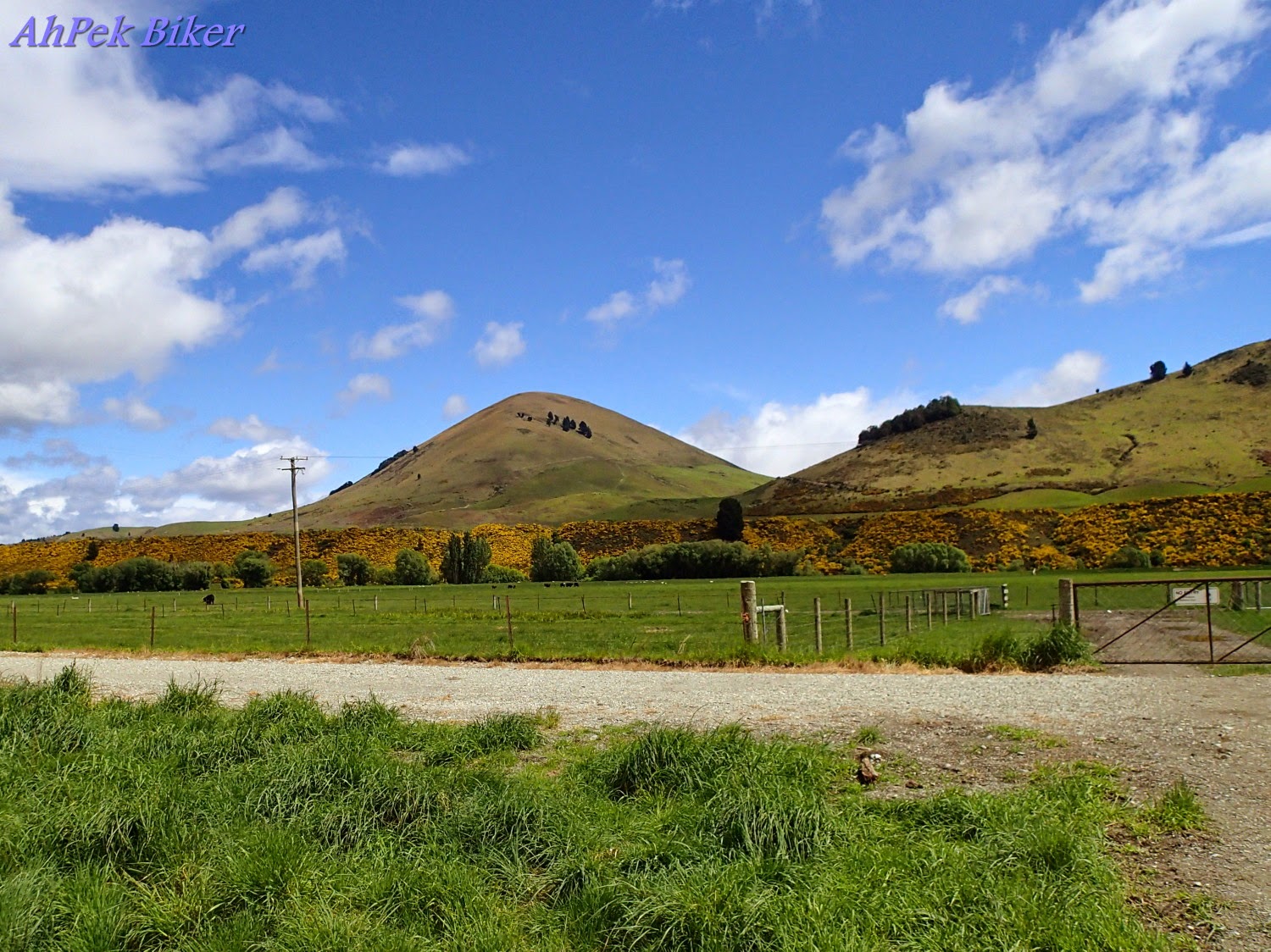 The skies were clear and blue as we left Queenstown. We drove by rolling green hills dotted with yellow flowers and noticed that there was a cycling trail running parallel with the road. This must be part of the Alps 2 Ocean Cycling Trail. 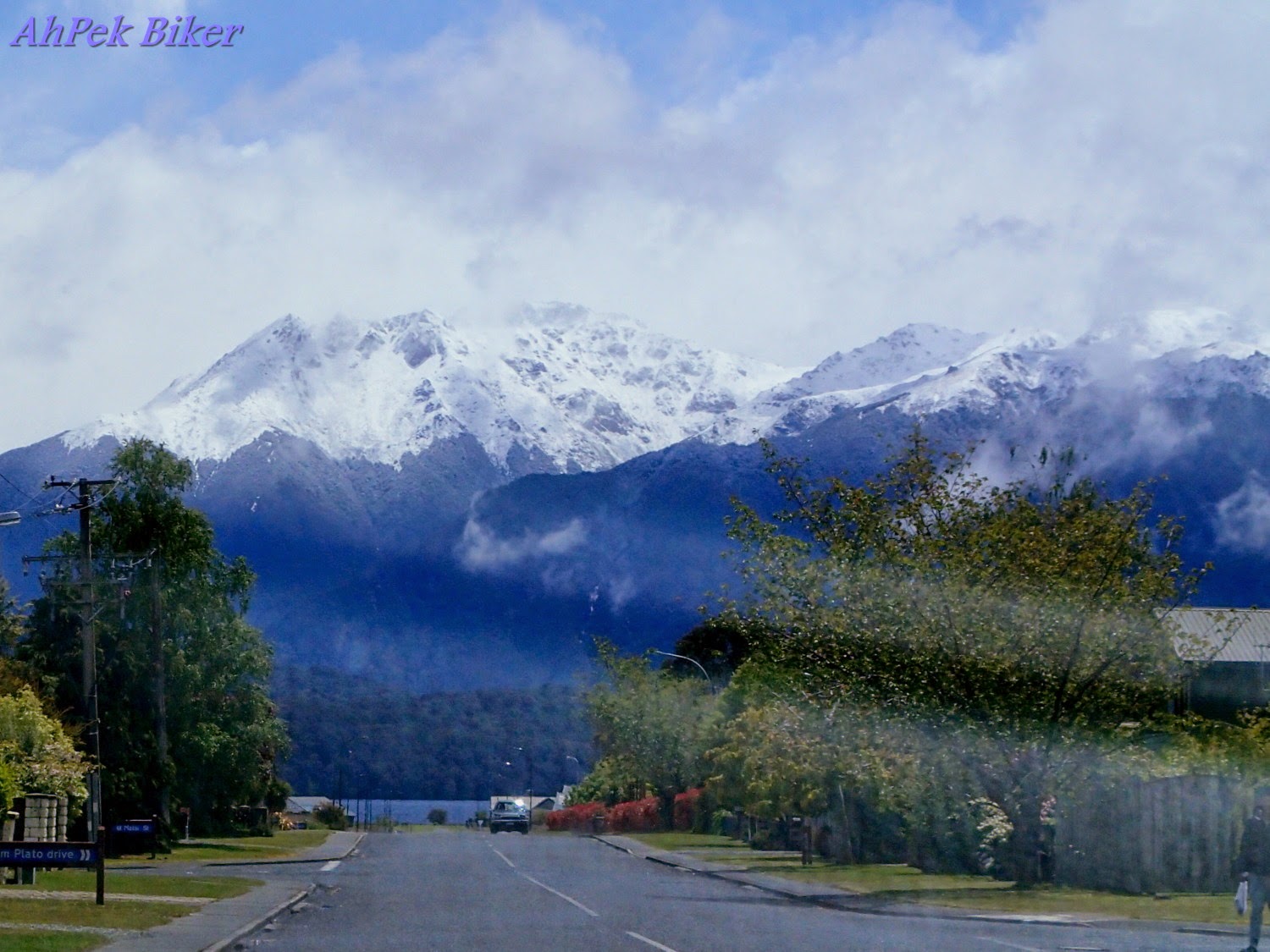 1:30pm - Arriving at Te Anua, we are back at the snowy mountains but the sky has turned grumpy again, rain clouds are forming. 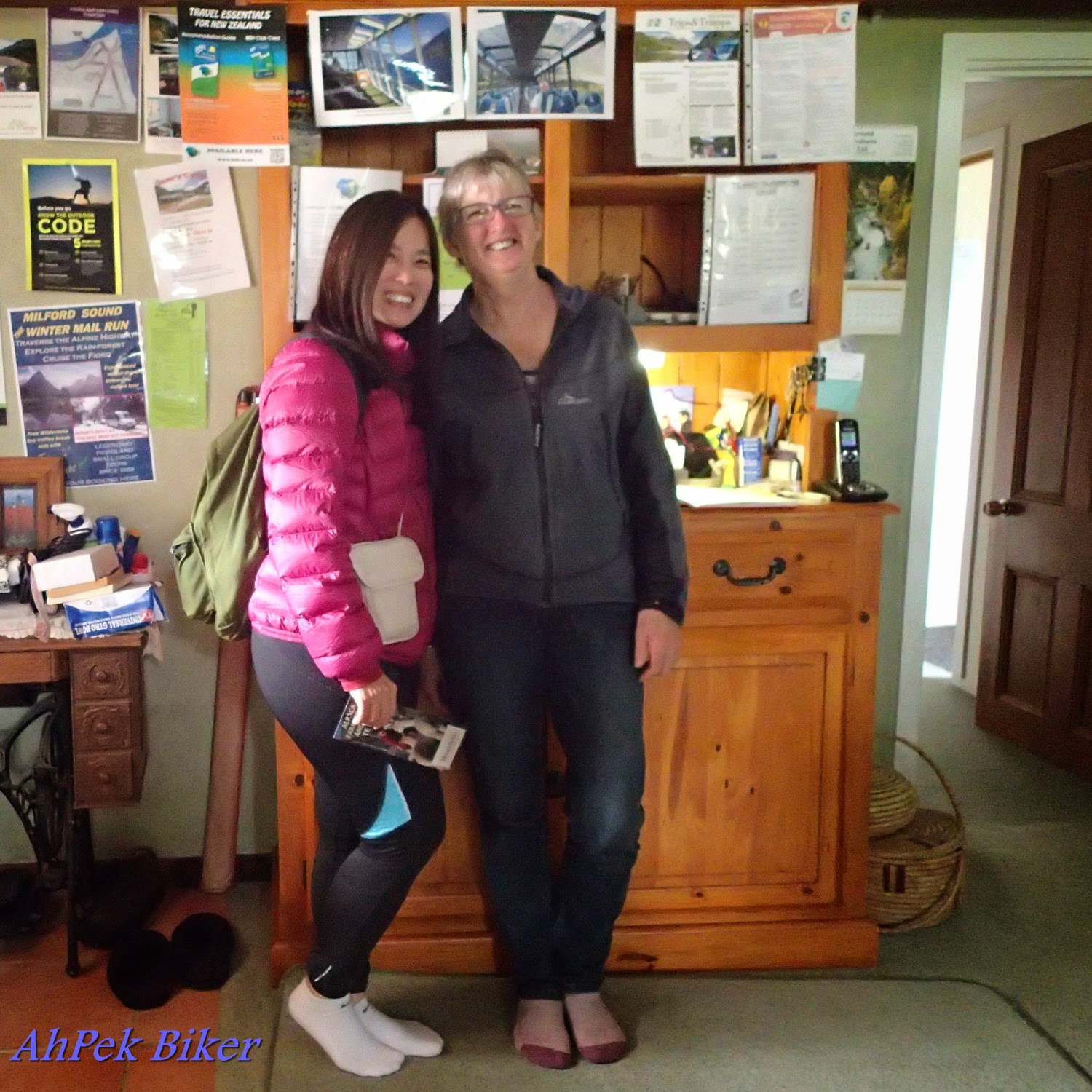 We stayed at Te Anua for two nights at a place called Rosie's Backpackers, situated at the outskirts of town.
Rosie was there to meet us herself, she treats all her guest like family members, welcoming them like relatives coming for a visit. Her warm and cheery nature certainly made us feel at home. Her husband, Alistair was a former ranger and is presently a avalanche forecaster for the this region. His skills came in helpful for us the next day. 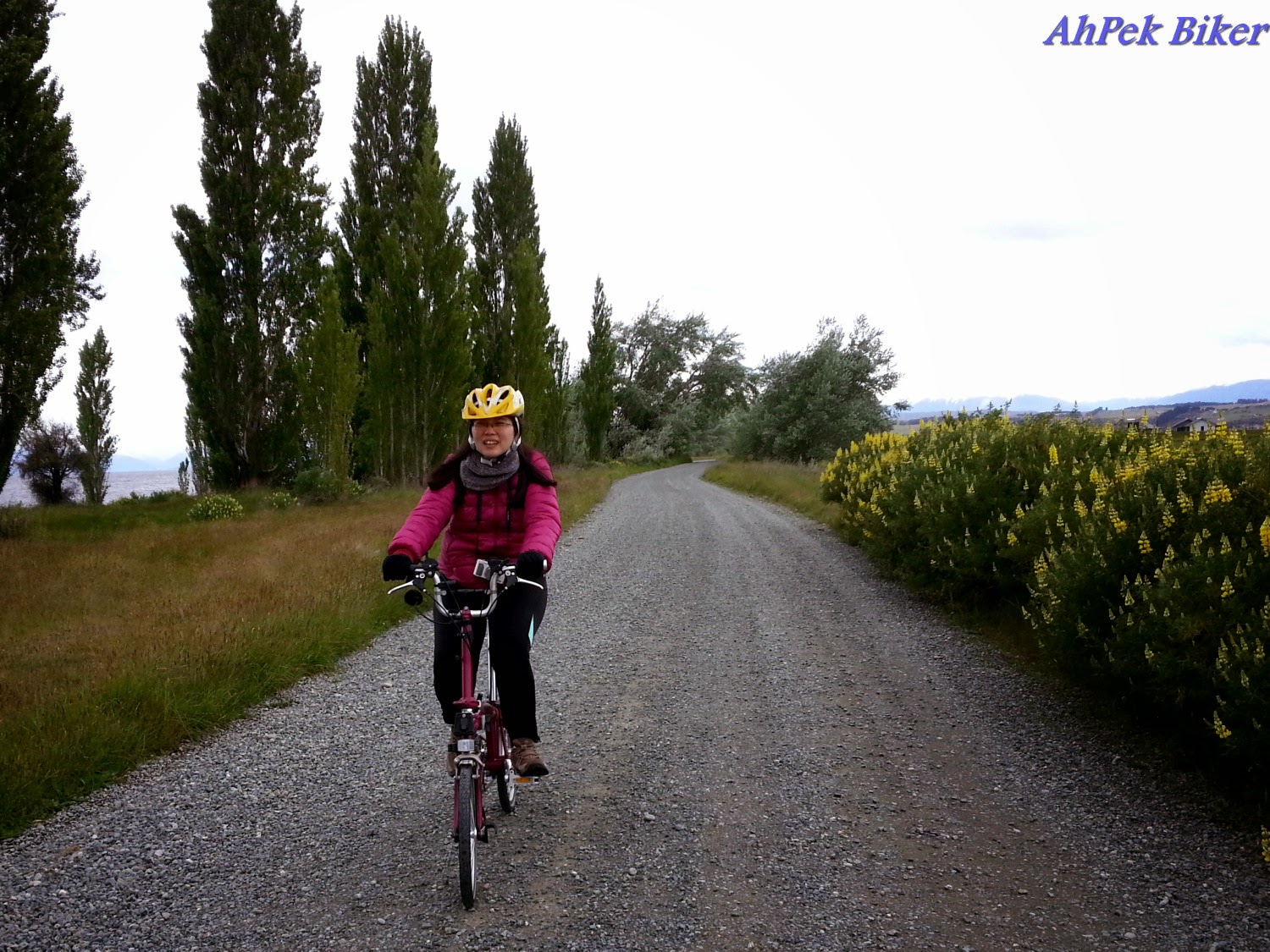 4:00pm - While Hui Min and Andrew went to see the renown Glow Worms Caves; Siew & Yung and me decided to stretch our legs a bit and cycled from Rosie's down to Te Anau town, using the lakeside track.
As we started, so did the rain start, it came drizzling down on us. Too eager to ride, we just donned our raincoat and continued on. 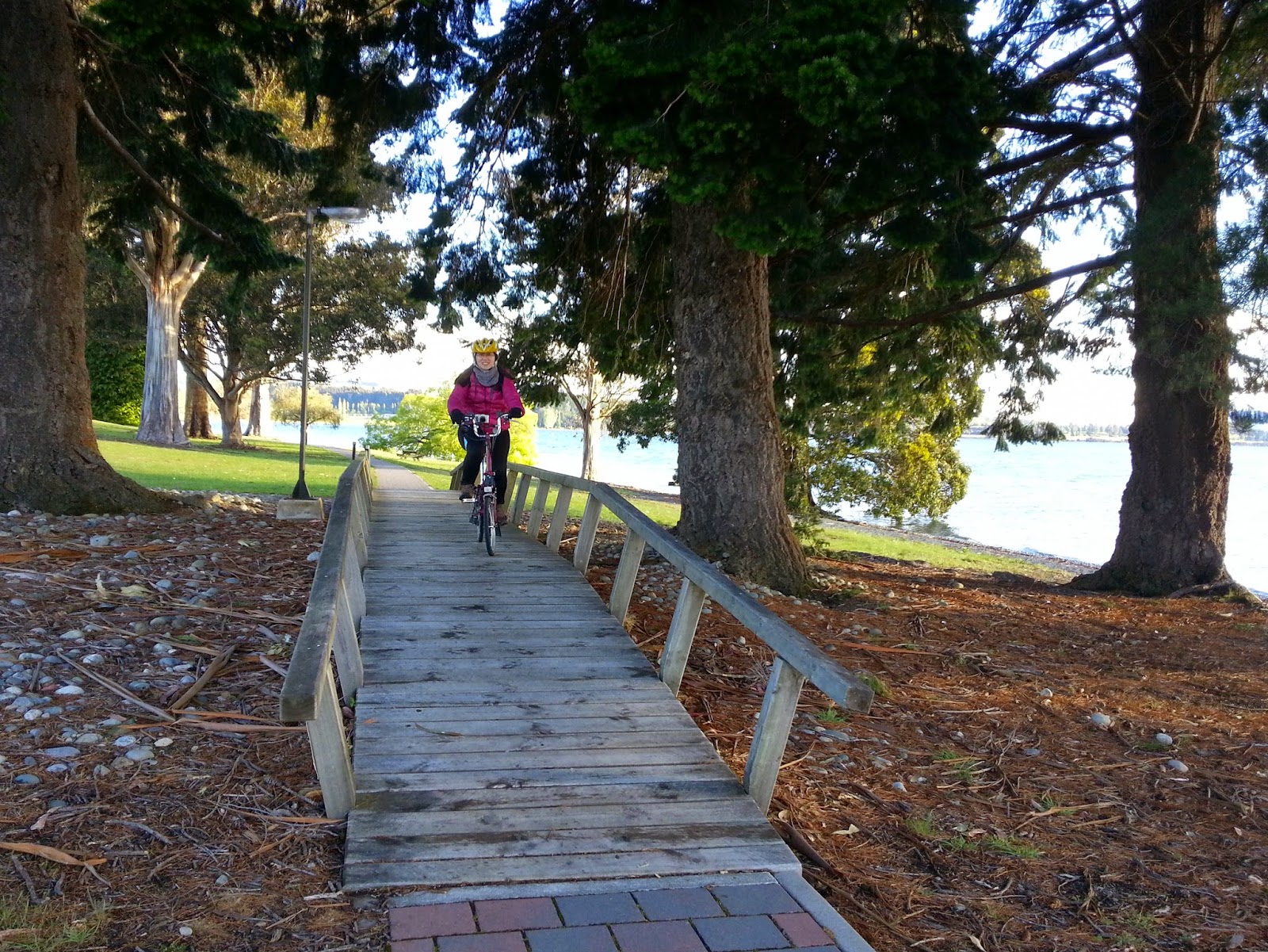 The route took us across wooden bridges through a green, landscaped parks... 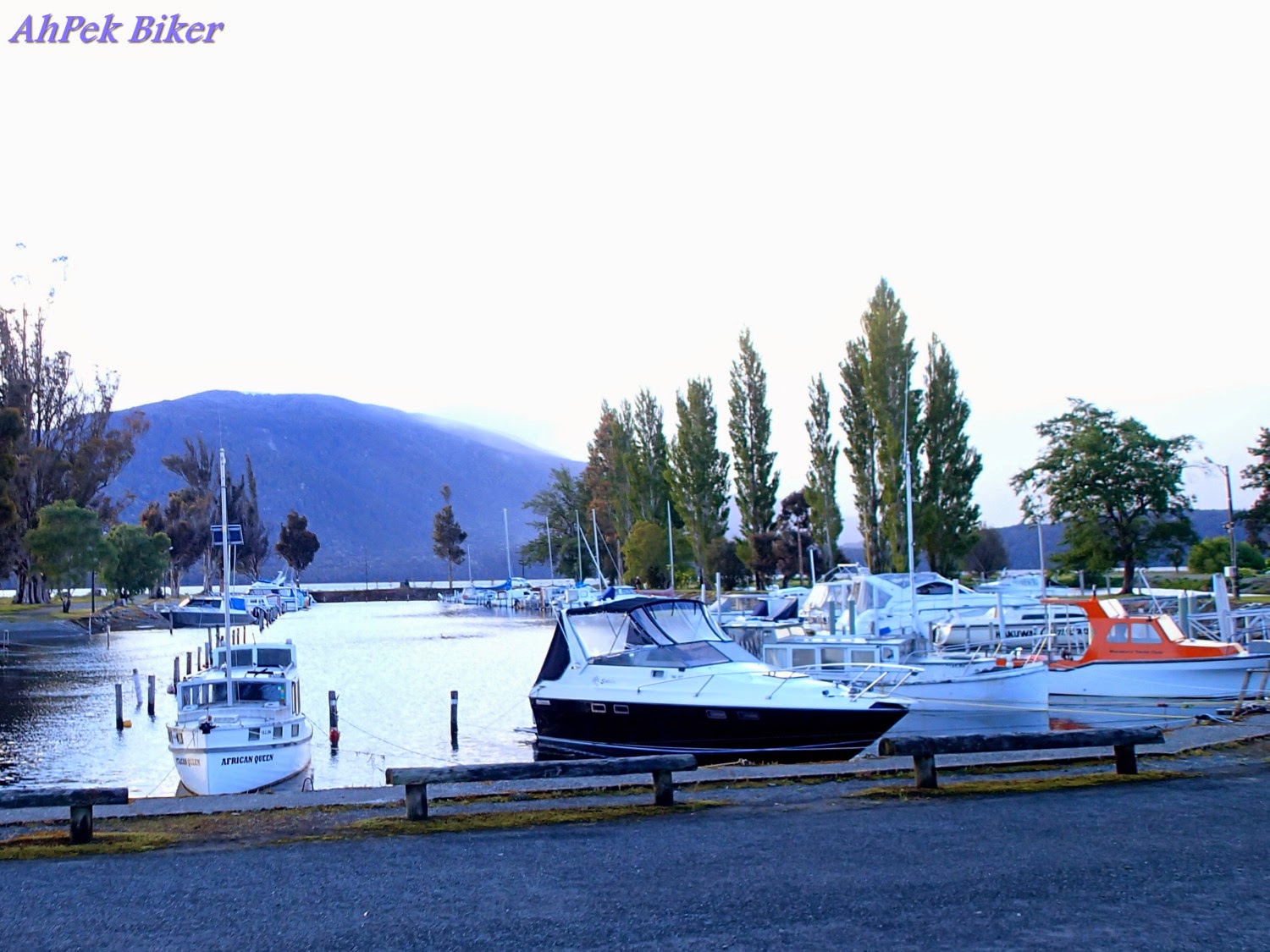 ... and pass boating marinas. The dull, drizzling weather wasn't much help in making the scenery pretty. 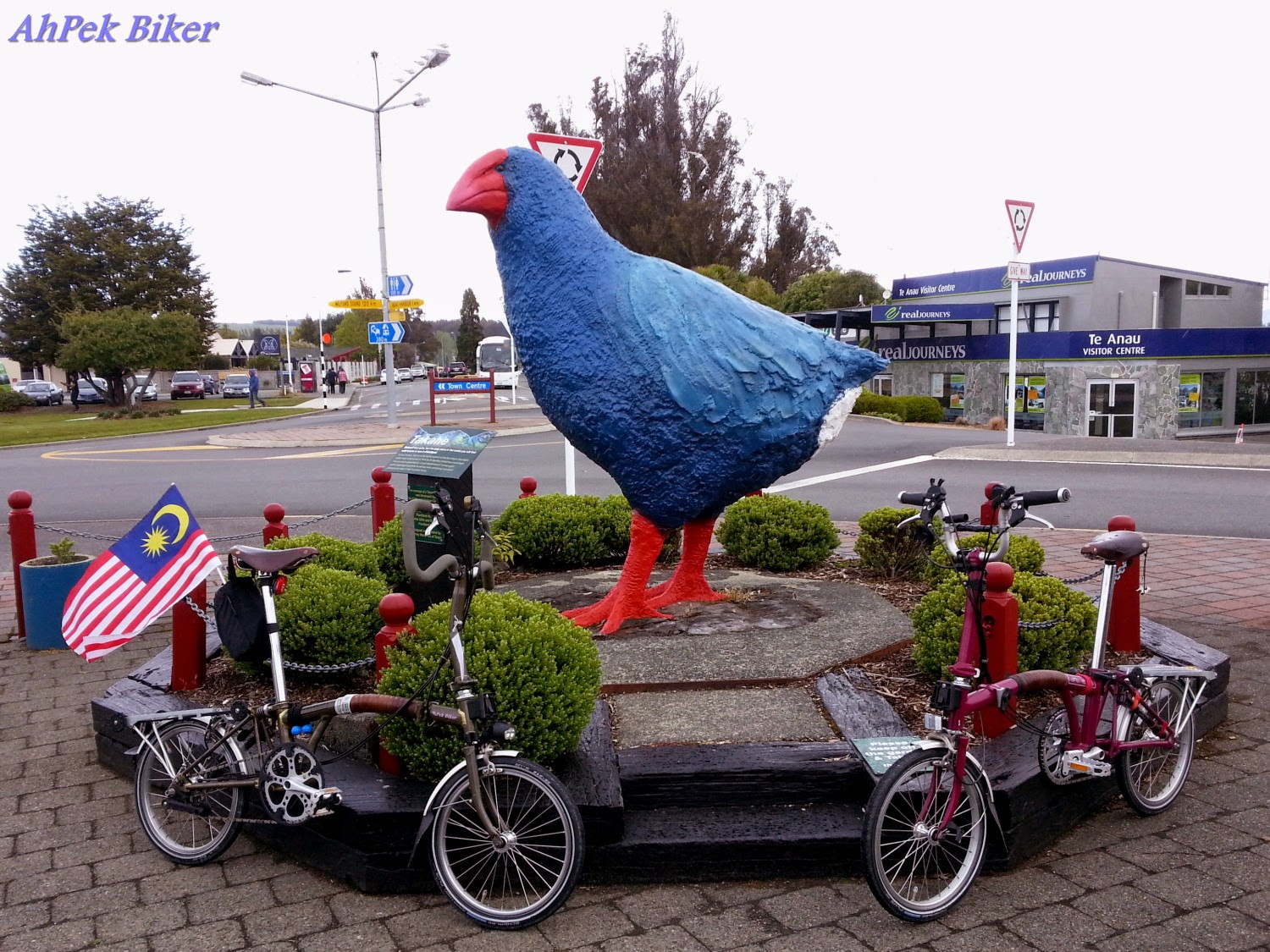 At Te Anau town centre is this blue bird which we thought was a sub-species of the Kiwi bird.
But it was not, it is the rare (and thought to be extinct) Takahē, a blue flightless bird indigenous to the Fiordland of NZ only. 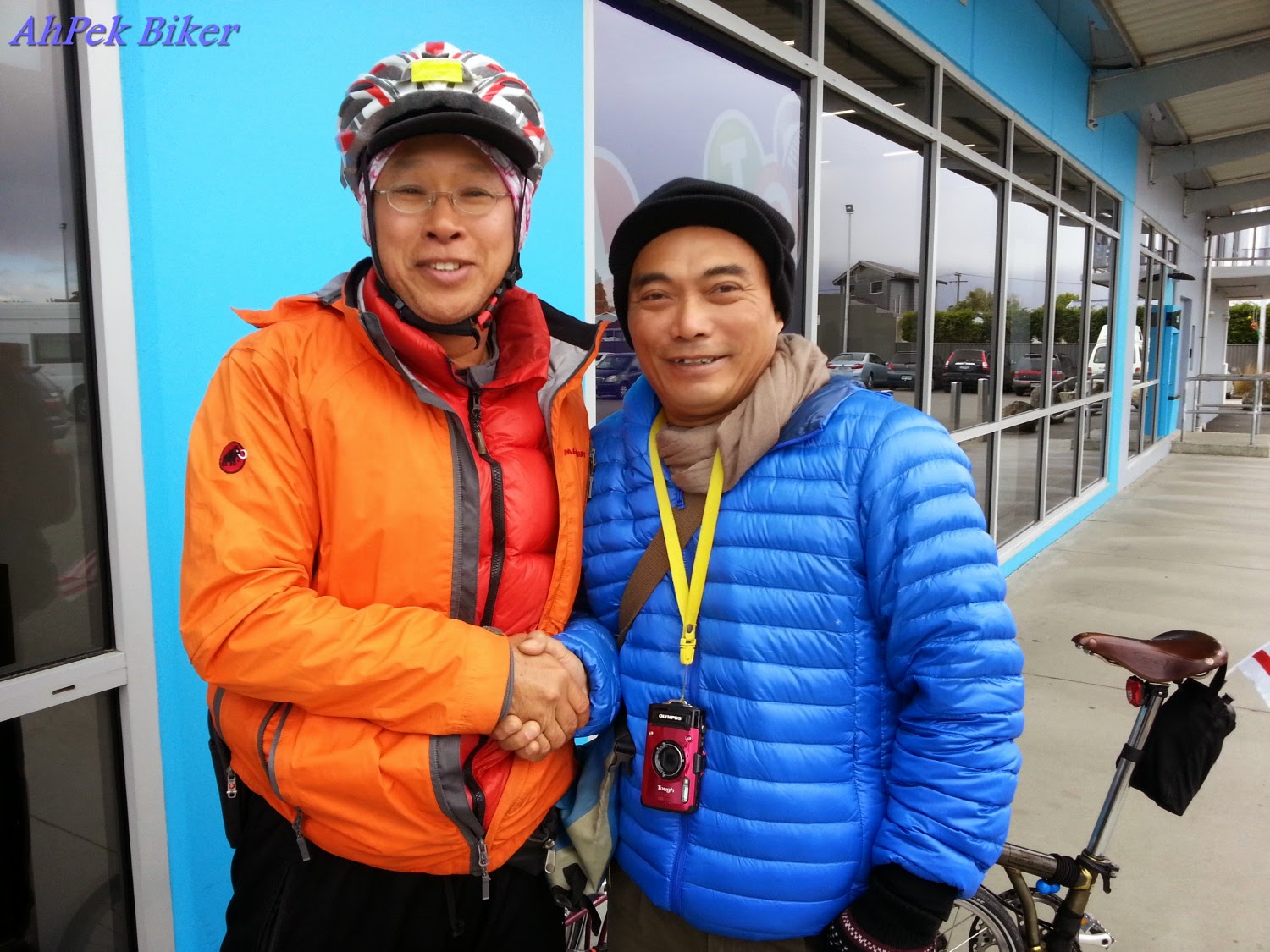 While at the Fresh Choice supermarket to do a bit of grocery shopping; a stranger noticing my Malaysian flag flying from my bike spoke to me, "Er.... you are from Malaysia, would you happen to know Rita?"
I looked up an saw another cyclist, he's Tiansak from Thailand. Together with his wife, Nisakorn, they had been touring New Zealand on their bicycles for almost two months already. Rita was a mutual friend who had hosted Tiansak while he was in Kuala Lumpur (through the Warmshowers site). See topmost photo also.
Wow, the world is a small place indeed. 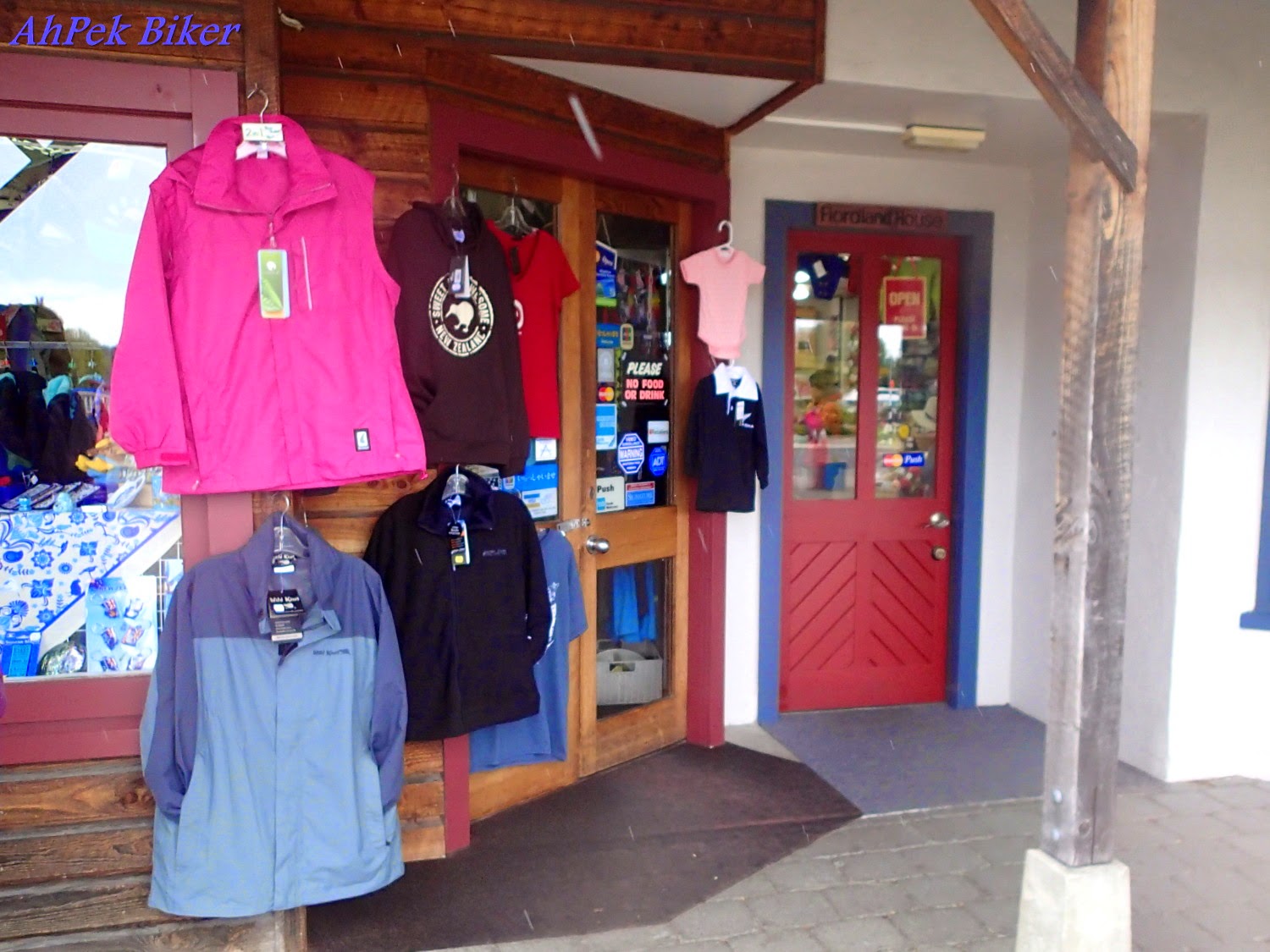 For those interested in shopping, at the town centre is this souvenir shop operated by a friendly old Chinese lady that sells items at reasonable prices. They also sell beauty creams and honey (Manuka, Clover honey). 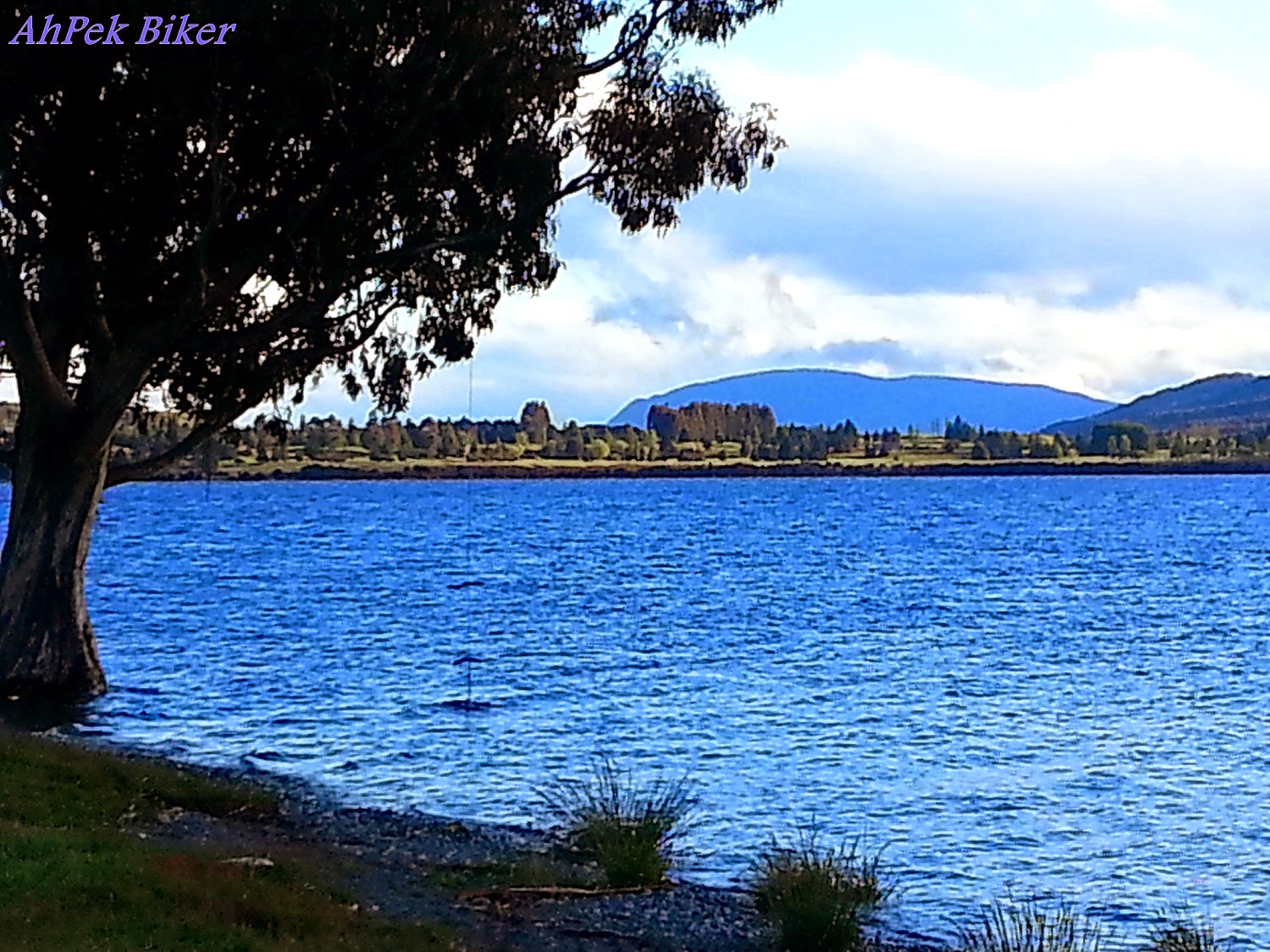 7:30pm - A bit of cheery ending to our ride; the sun decided to peek out and the waters of the lake turned a beautiful blue. We kept our fingers crossed that this better weather will continue onto the following day as we will be visiting Milford Sound then.

But it was not to be, Alistair had consulted the latest weather charts and predicted that there will be a storm in the afternoon of the following day. He advised that we should leave early for Milford Sound and RETURN by noon so as not be stuck there as the roads will be closed after noon.
With this news, we were undecided on whether take a scnenic drive up to Milford Sound or play it safe & follow one of those day tours from from Te Anau. We cooked and had our dinner, then retired early. Let's decide tomorrow then.
(For more photos see FaceBook photo set - Click here)