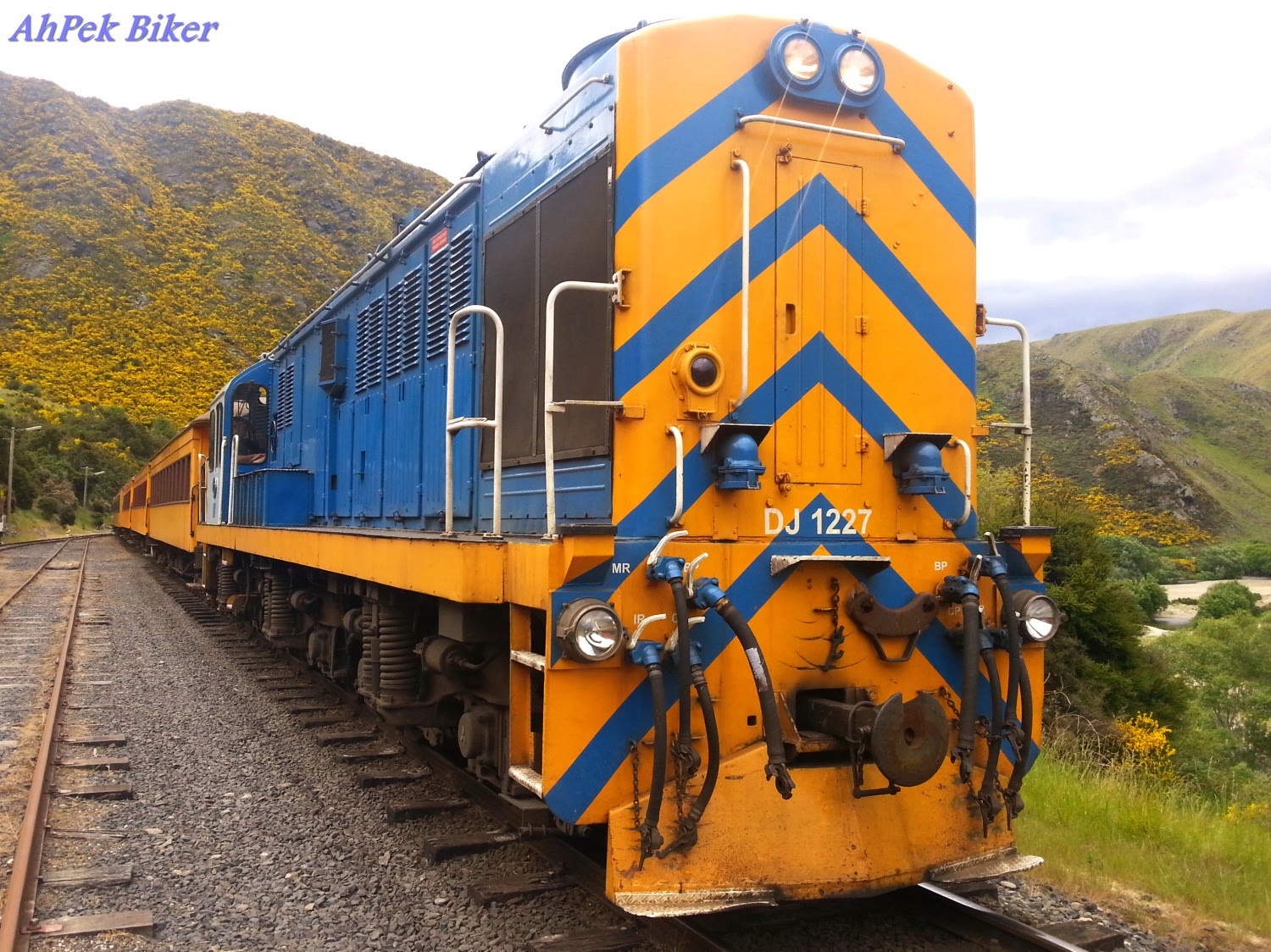 After four days. it's the home stretch for us today on the Otago Central Rail Trail after which we packed our bikes into a train for a scenic train trip to Dunedin.
And....
... we will be staying at a haunted house for a couple of nights.... Oh...OH...

Route Recommendations :
1. The Otago Central Rail Trail is opened for all seasons. It spans a total of 152km. from Hyde to Middlemarch. One can start from either Hyde to Middlemarch or vice-versa. Or if one feels not up to doing the whole trail, do just part of it.
2. Most cyclist use mountain bikes with off road tires. But the Otago Central Rail Trail is doable with the 16" wheel Bromptons or similar bikes. Just bear in mind that the trail was a former railroad with the tracks removed and the gravel supporting the sleepers levelled off. These gravel are loose and many have sharp edges, so it will be a good to use tires like the Shwalbe Marathon Plus tires to reduce risk of punctures.
3. Depending on the time of the year, New Zealand can be rather cold. If you are from the tropics do wear appropriate clothing. For the top four layers consisting of a inner thermal (like Uniglo HEATTECH), a t-shirt, a woollen sweater and finally a wind-breaker. For the bottom; undies, a inner thermal pants, jeans or cycling long pants and woollen socks with a good pair of sneakers. For the hands, woollen gloves would be good.
4. Weather in NZ can be unpredictable, do not make the same mistake as me and forget to bring a good raincoat. Things in NZ can be expensive, so it's best to bring one from your home country.
5. With smaller-wheeled bikes, restrictive thick clothings, loose gravel road, slopes, head-wind, cold temperature, etc., it is harder to cycle along the Trail when compared to cycling on tarred roads. A 50km ride on the trail could be equivalent to cycling 150km on roads. So adjust the daily ride distance to suit one's physical capability accordingly.
6. It would not be realistic to carry one's luggage while cycling along the trail, a couple of companies (click here for tour operators) provide luggage transfer from point to point at a charge of NZ10/= per piece per day. Carry a small back-pack to hold a first-aid kit, food, etc., and to keep sweaters and wind-breakers if the weather takes a turn.
7. The tour operators also provide bike rental and support, and assist in booking accommodations & dinner along the trail. They will also recommend ride distances per day, but it's up to individuals to plan to their own liking.
8. The Otago Central Rail Trail passes through varying sceneries like meadows, rocky ravines, beautiful rivers, former railway bridges and tunnels, etc. Plan not to rush through and leave ample time for taking many photos.
9. Wind and rain can hamper an otherwise good ride, use web-sites like m.metservice.com to pre-check the weather so as to be prepared and adjust the route accordingly.
10. If on a budget, most home-stays allow cooking. Cook your own dinner or even pack extra for lunches. Otherwise buy take-away pies or sandwiches, for pies it's best to spend slightly more for better ones. The cheaper pies tend to be jelly-ish with hardly any chunky meat.

Ride Route: Kokonga>Hyde>Rock & Pillar>Ngapuna>Middlemarch
The final day of our Otago Central Rail Trail ride was a 42km. route, one that was fairly flat and quite straight taking us pass a few towns and also a memorial. 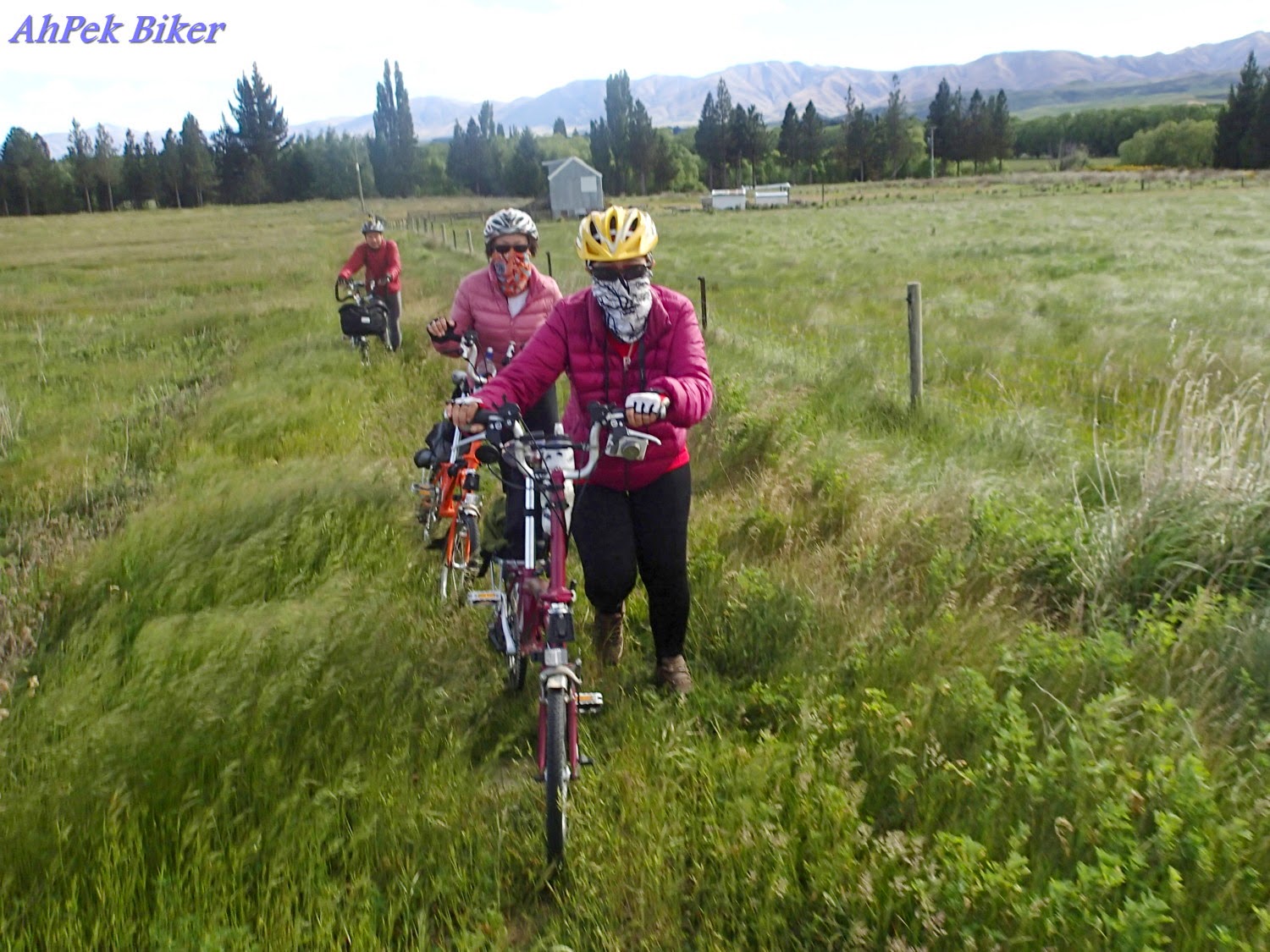 9:10am - With a tinge of sadness, we said our goodbyes to Fred. We will definitely miss his lovely home and his friendly spirit.
As we pushed our bikes up his grass meadow, most of us were deep in thought about how a simple man and his warm home had touch us so easily. 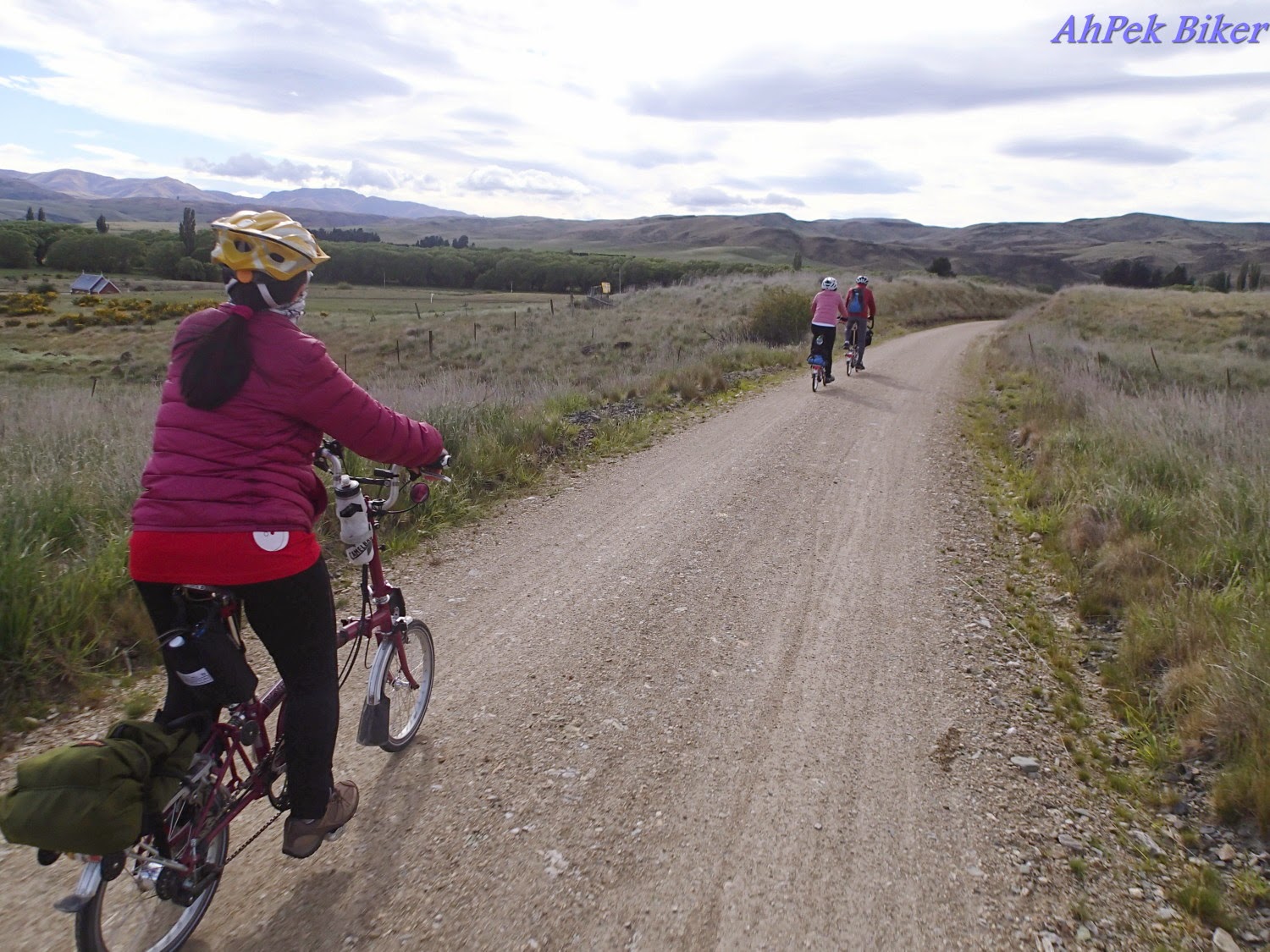 We hit the road... I mean the trail. Today's route is quite easy, fairly straight with some gentle undulating slopes. But there was not much of a tail wind, in fact at certain stretches we did encounter head winds. Fortunately, these were not the strong 70kmh gusts; I can't imagine struggling against those. 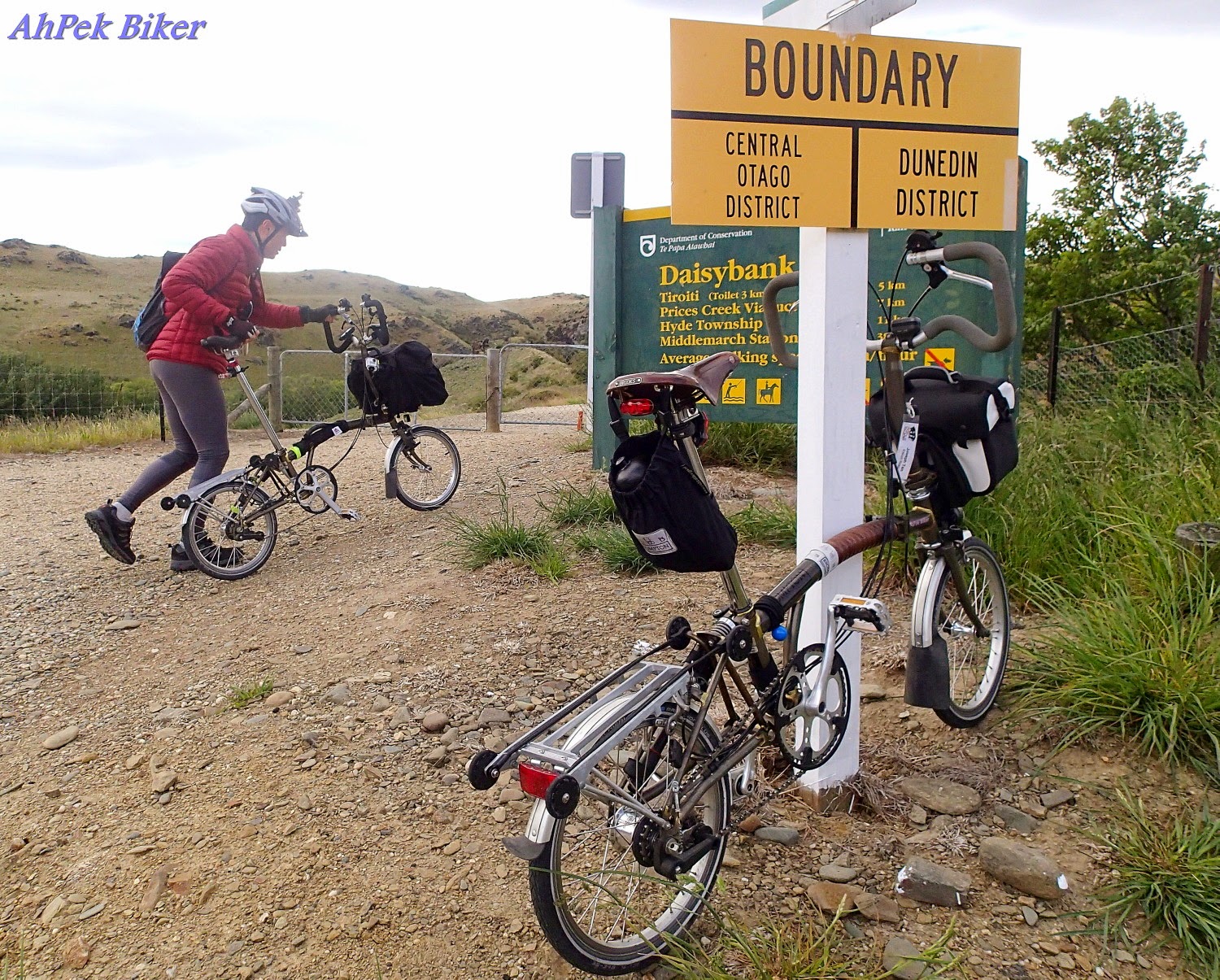 Within twenty minutes we were at Daisybank, this place marks the spot where we officially leave Central Otago and crossed over to the Dunedin District.
The route will also take us across place with interesting names, names that seems to come from different parts of the world. English sounding ones like Daisybank, Hyde; and Tiroiti, an Italian one; Maori ones like Ngapuna and Pukerangi; and even an Irish one like Dunedin.

Photos of some of the places and scenes we passed through: 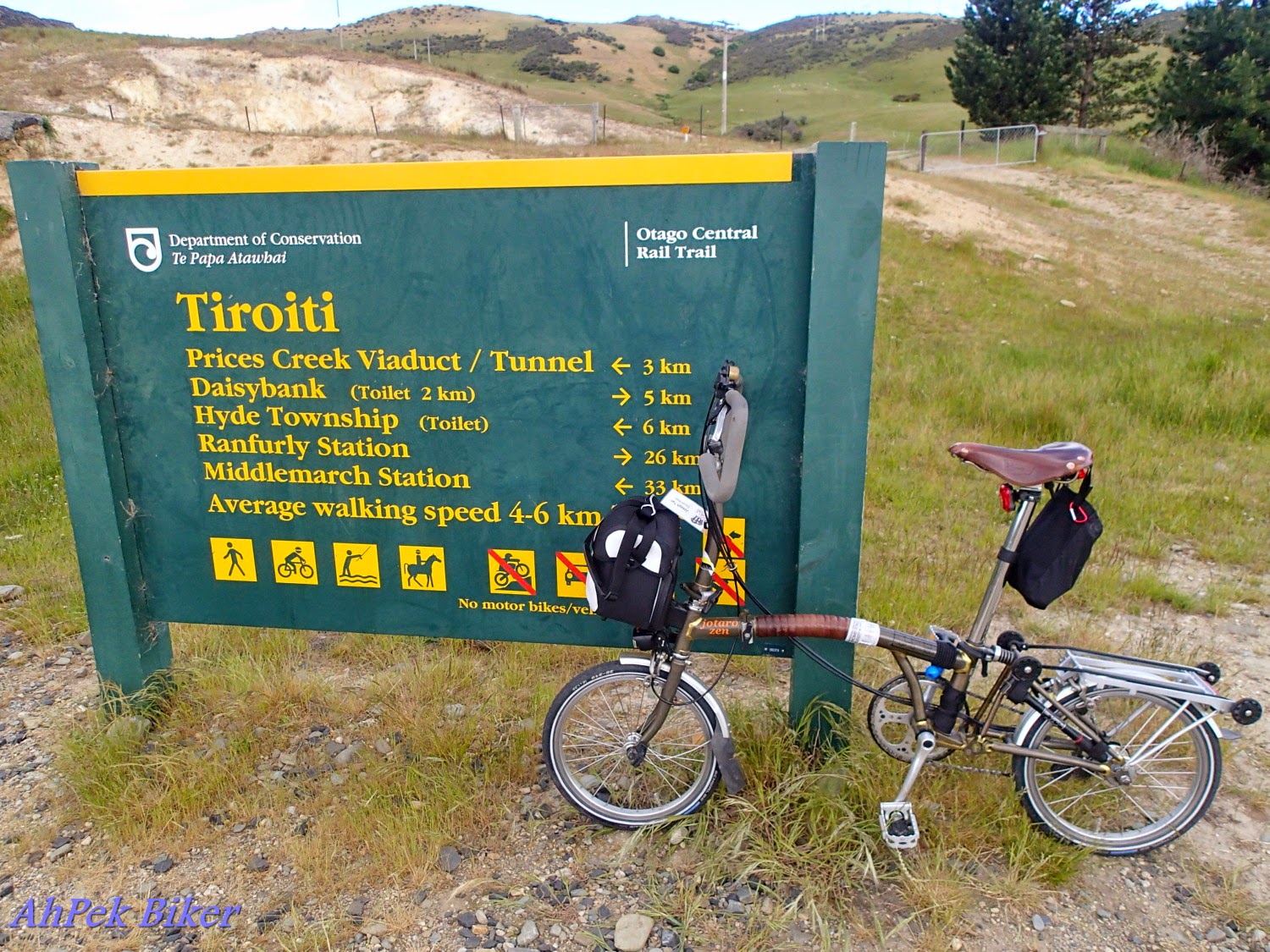 At Tiroiti, that Italian sounding name which probably may not have anything to do with Italians. 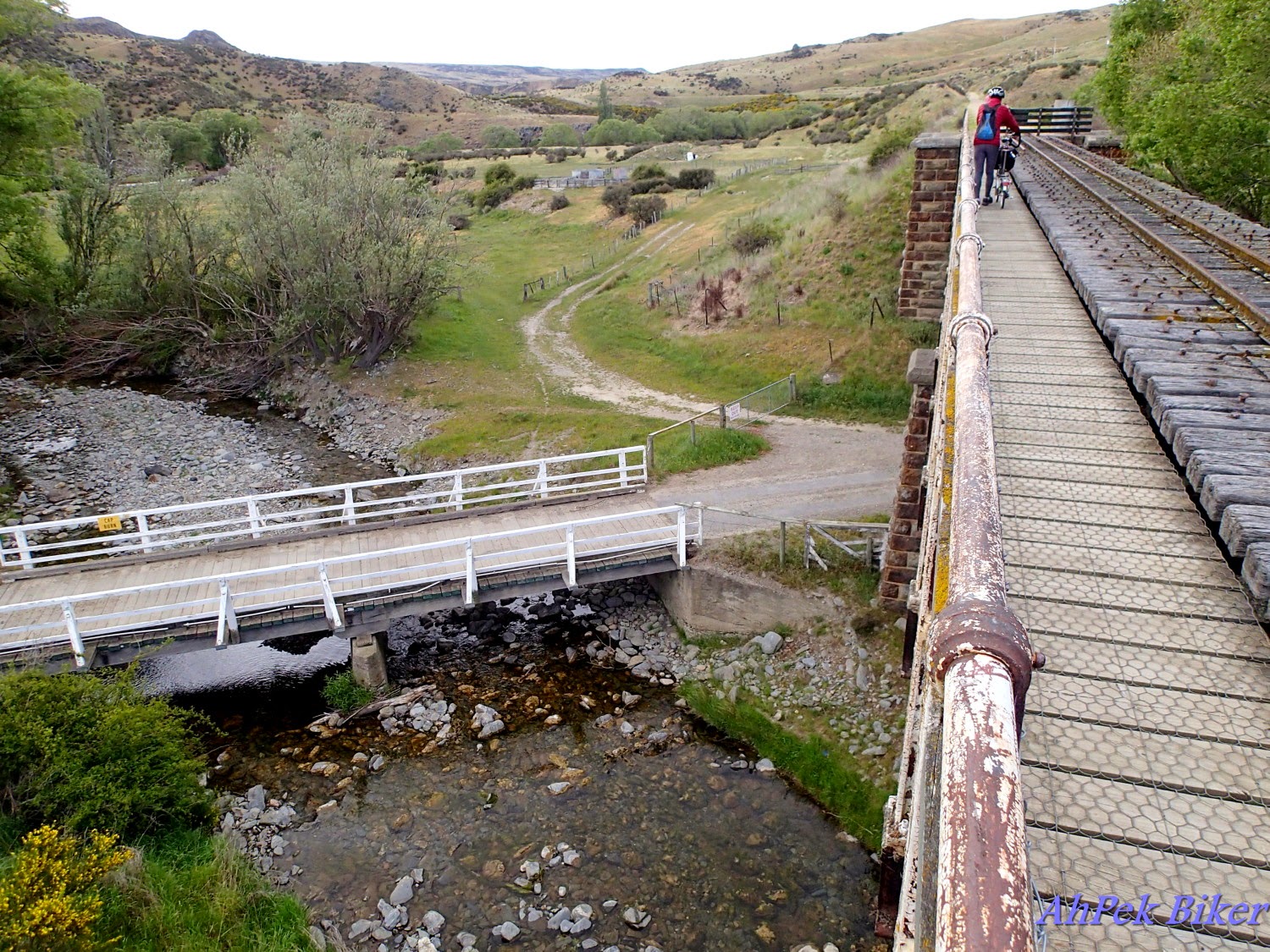 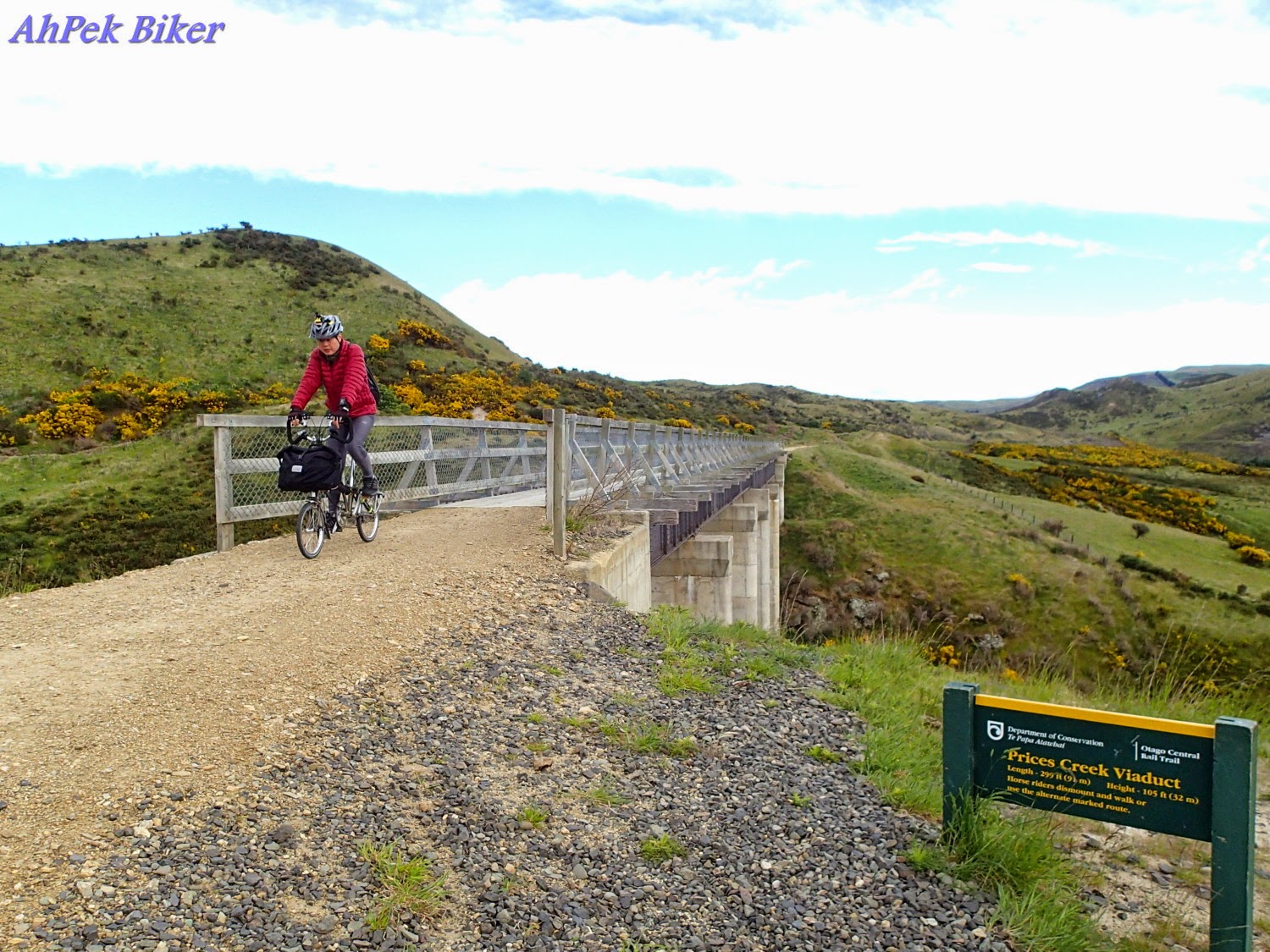 And across the Prices Creek Viaduct. 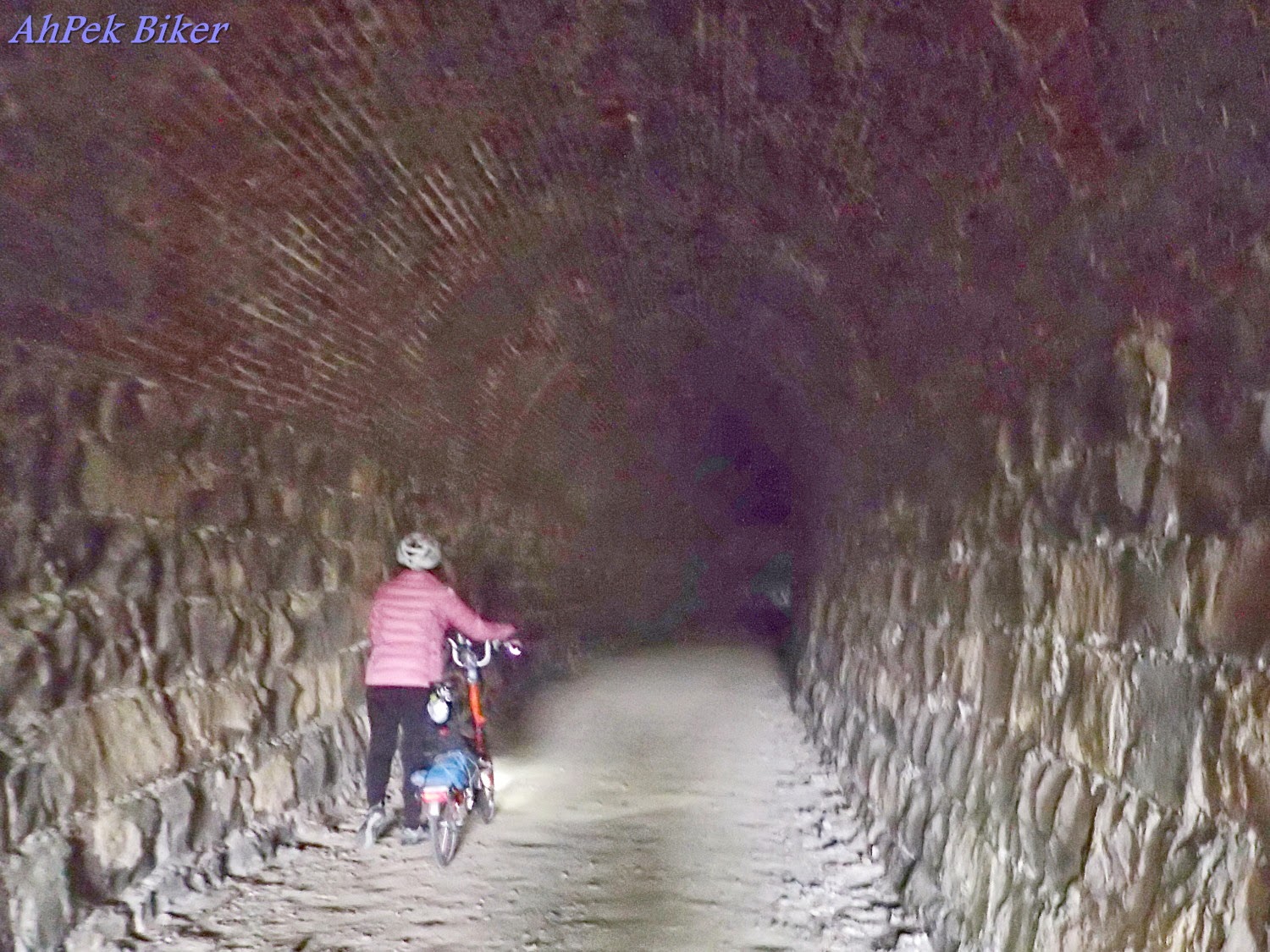 Into the dark unknown of the stone-lined Prices Creek Tunnel. 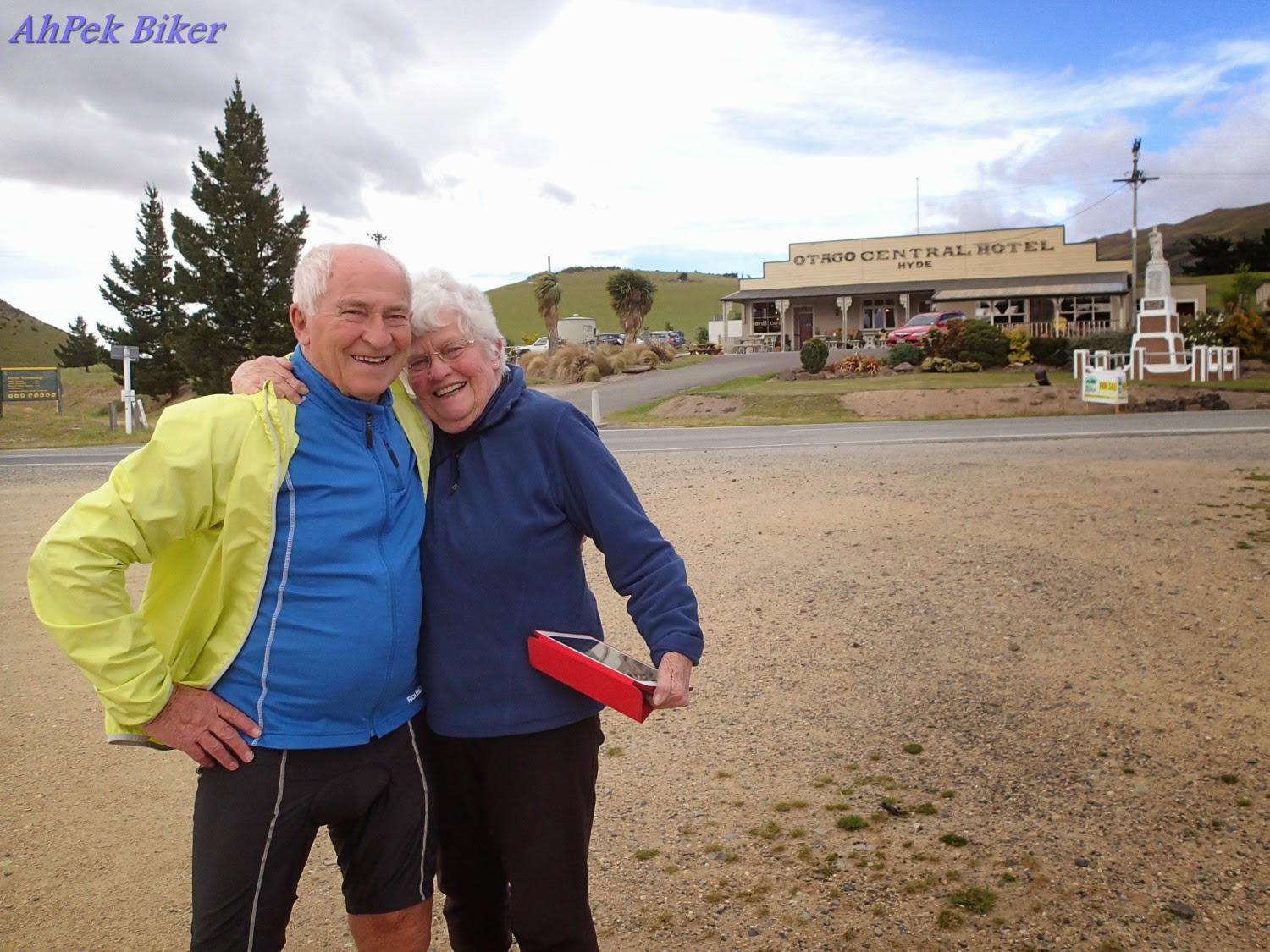 We met this loving couple at Hyde. Almost into their eighties, they and some friends of similar age are doing a short day ride of the Trail. 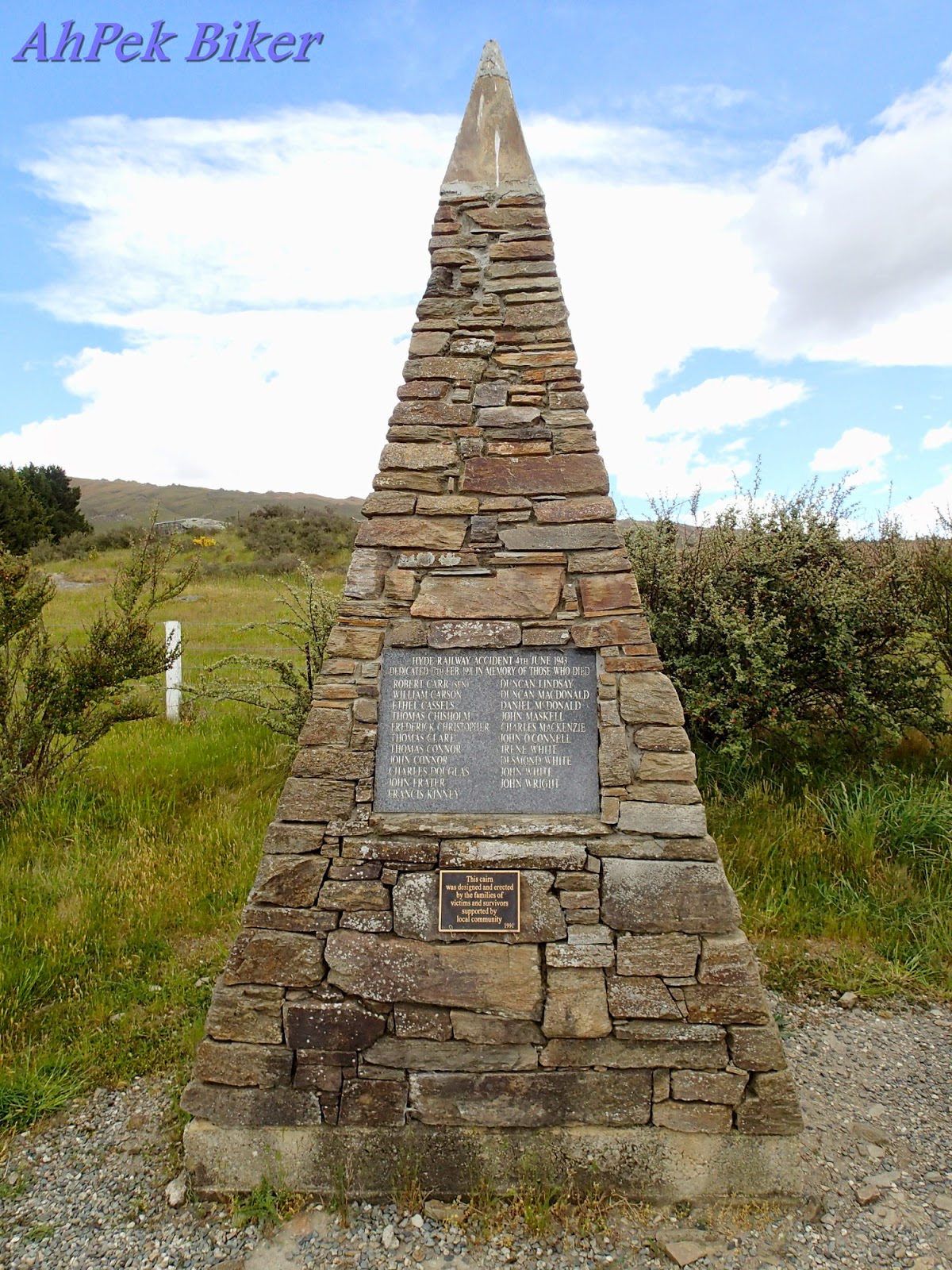 Stopped to offer a short prayer at the Hyde Memorial; a rocky cairn erected in memory of those who perished at the Hyde Railway Disaster of 1943. The accident site is 540 metres north of this spot. 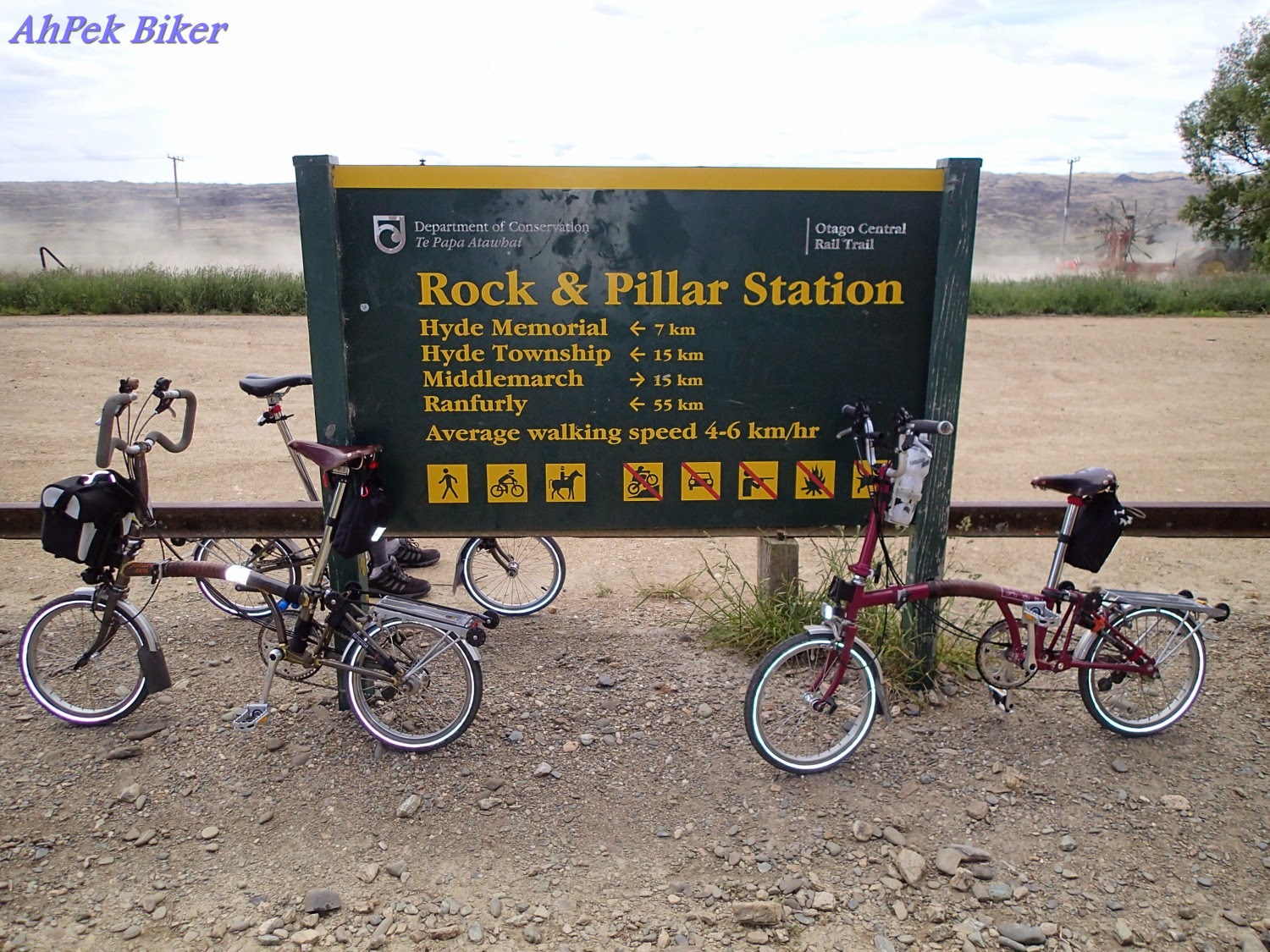 At the Rock & Pillar Station; saw some rocks here but did not see any pillars. *grins* 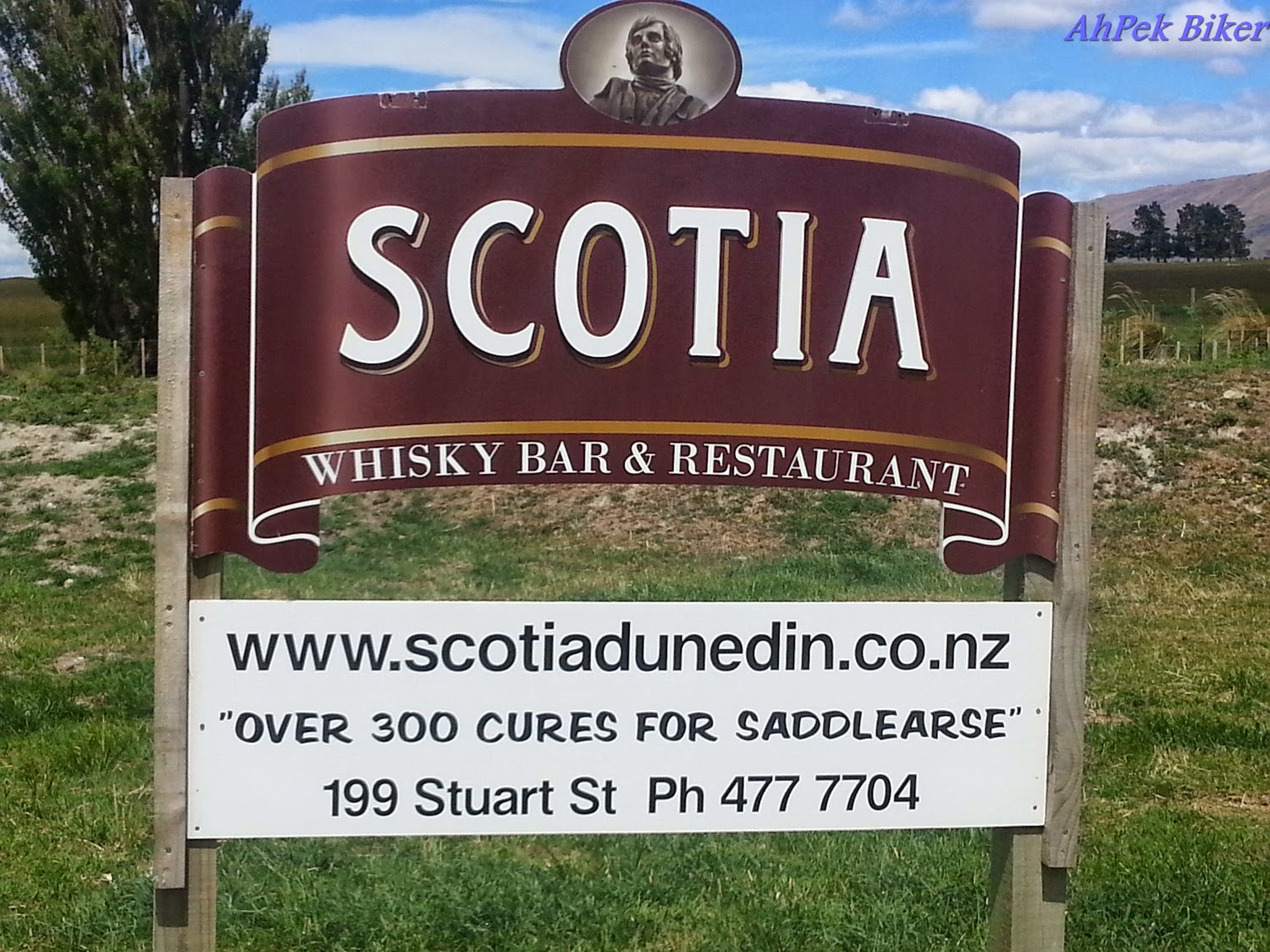 A tempting advert for those who have cycled too much and have butt pain; they have "OVER 300 CURES FOR SADDLEARSE". But seriously, I wonder what this means. 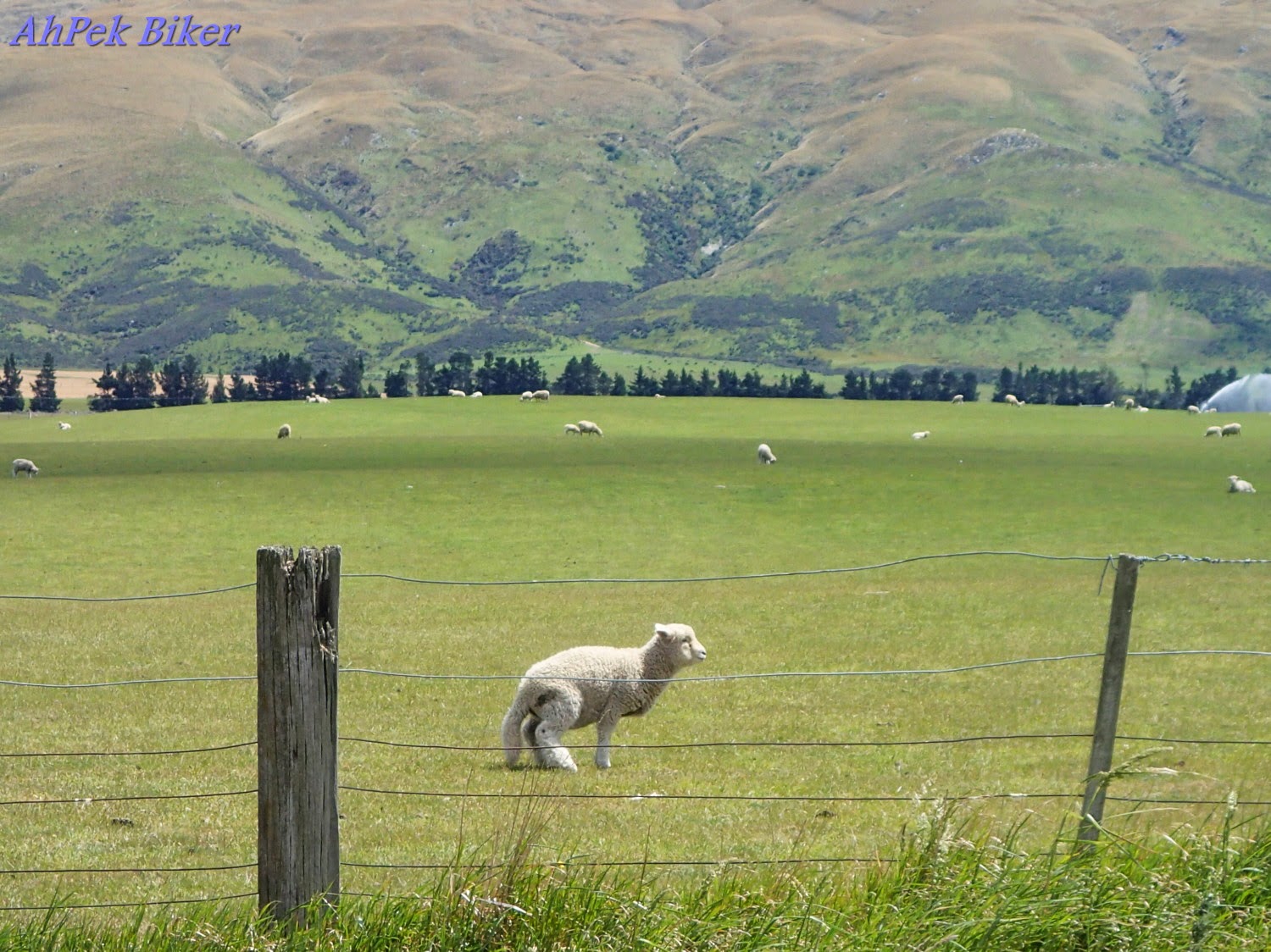 Hah! Saw a sheep pooing! It seems to be grimacing, perhaps after doing it's business it will need the arse cure shown above.
Pardon me if I find this amusing; coming from the tropics this is something we don't get to see. 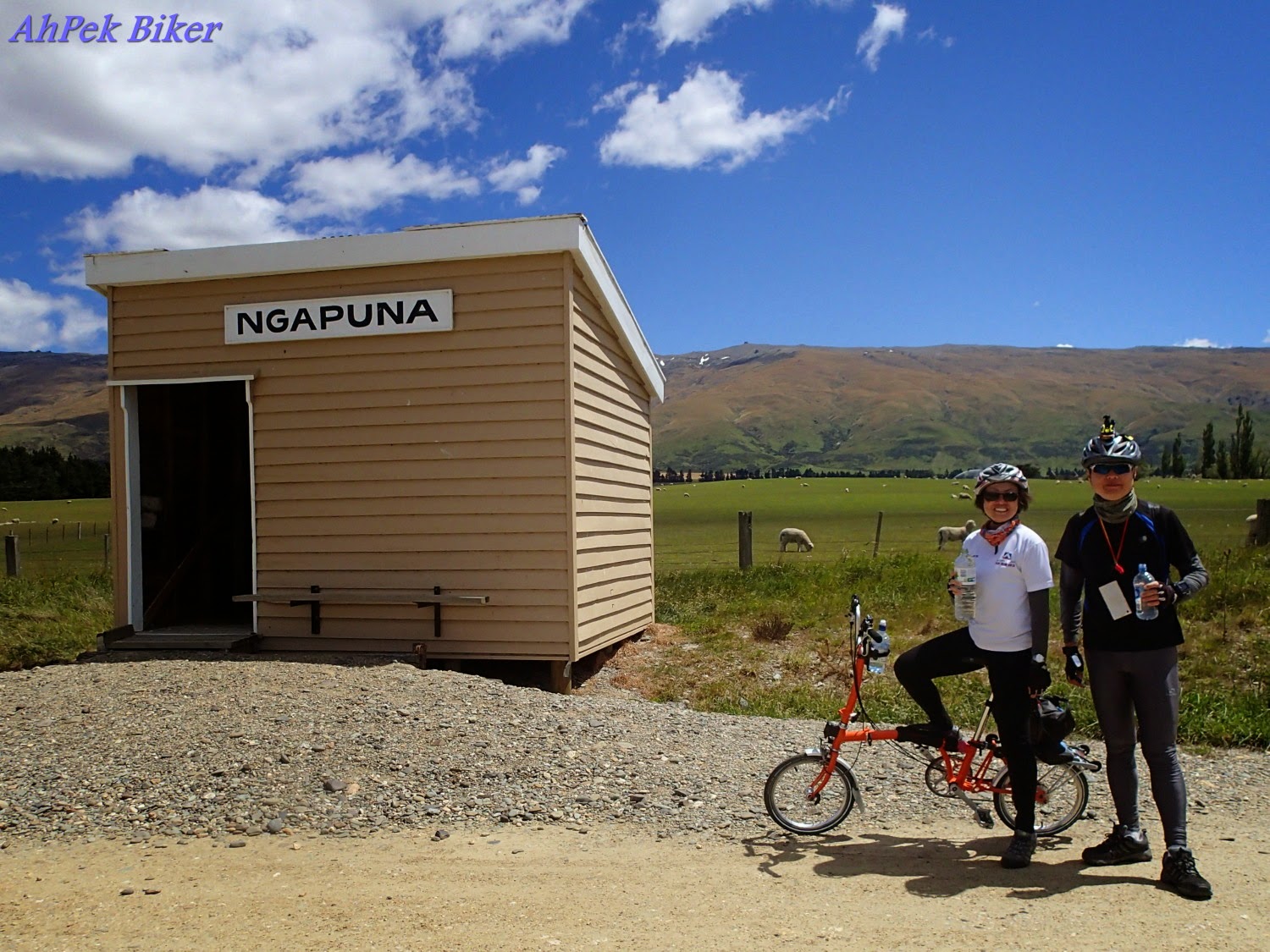 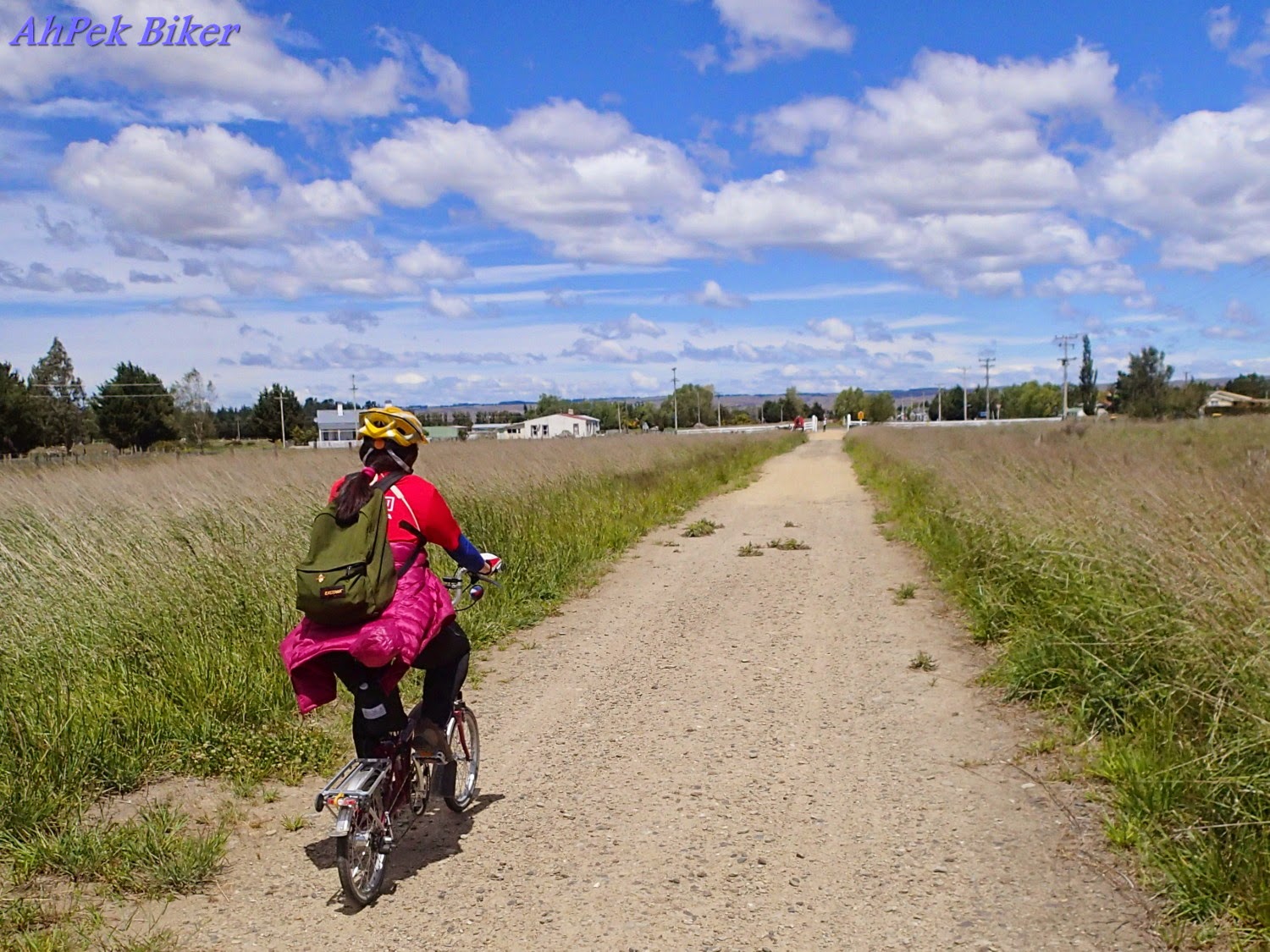 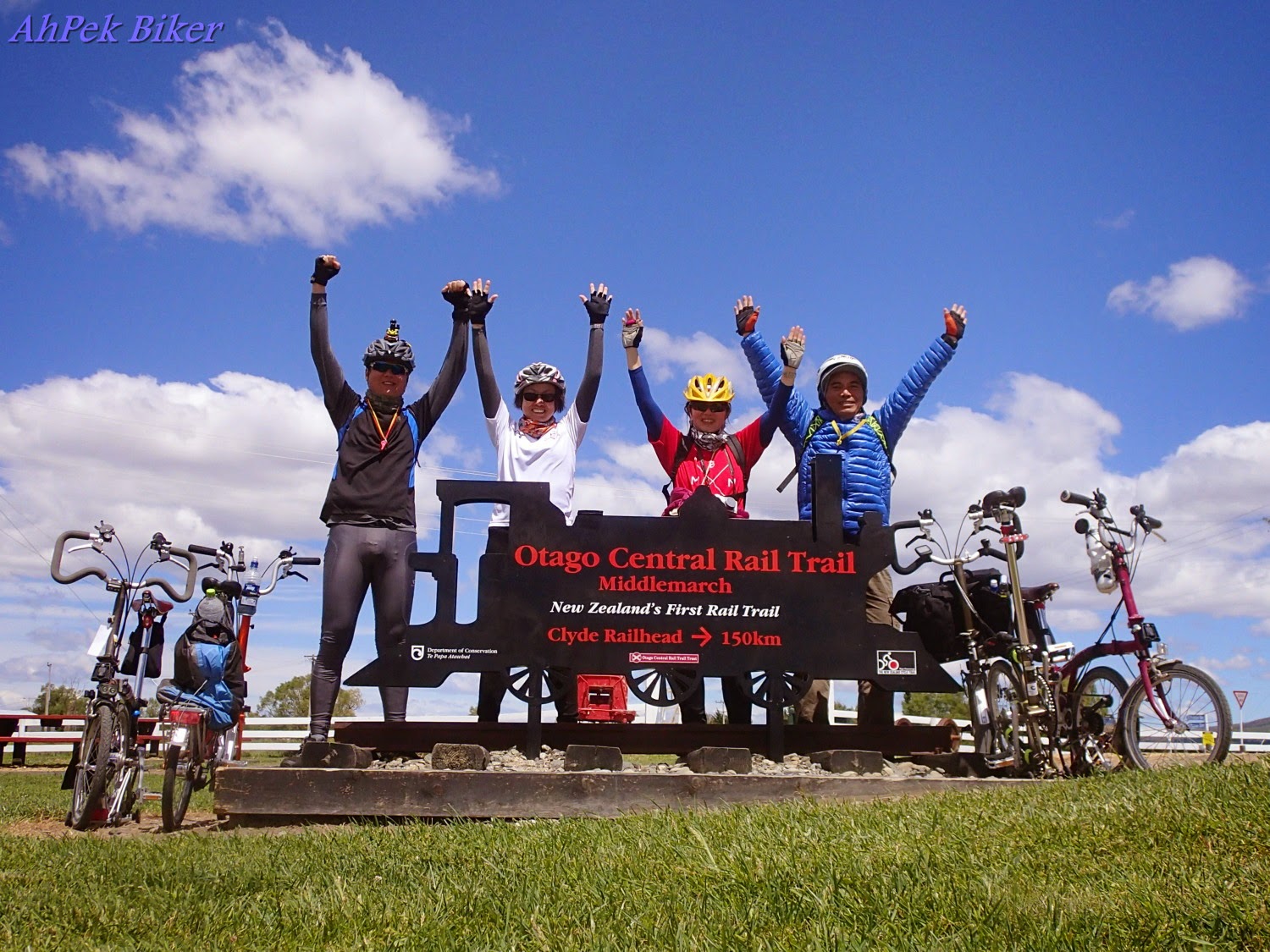 YIPEEE!
We did it! 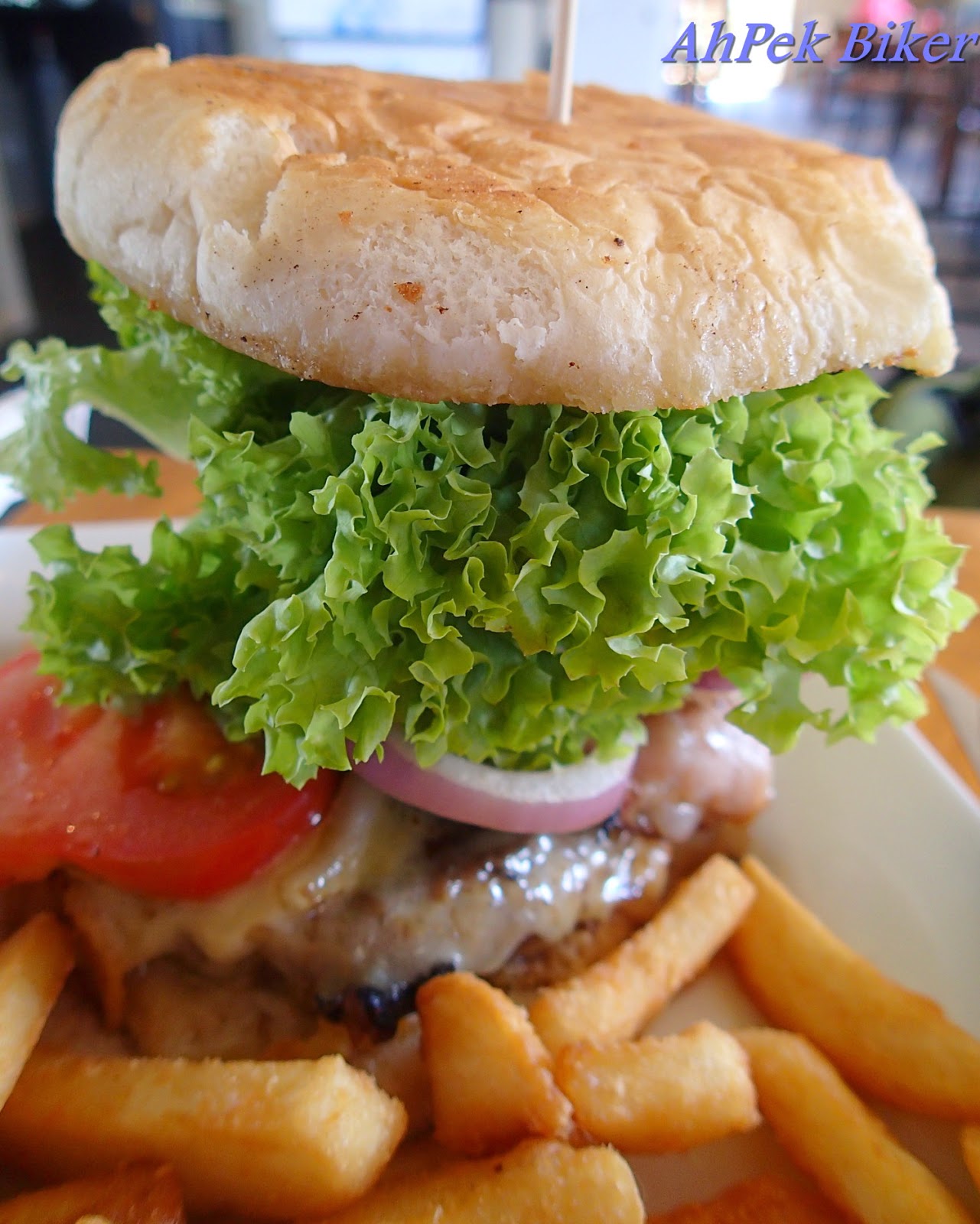 After a well deserved lunch celebration at Quench Cafe-Bar, we loaded our folde Brompton bikes into a truck (part of shebikeshebikes service) and was driven over to Pukerangi. From there we took the scenic Taieri Gorge Train ride to Dunedin. 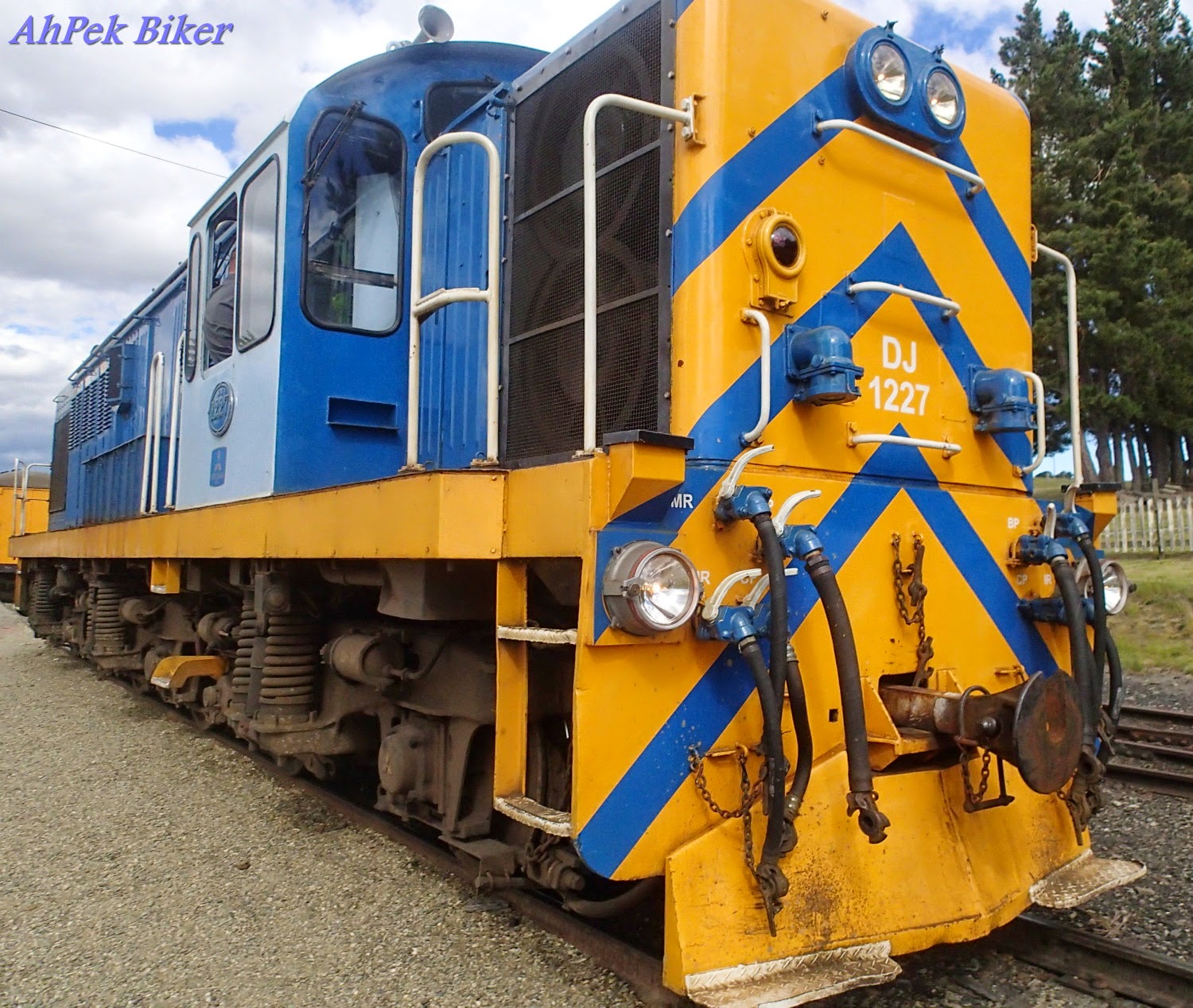 The Taieri Gorge Train ride is one not to be missed, it runs through one of the most scenic spots in New Zealand, if not the world. Breathtaking would be a more appropriate word.
Painted in yellow with blue stripes, the train itself looks grand. Inside the train has been decorated with an antiquarian look and riding in it makes one feel like pioneers in a budding country.
Our folded bikes were not allowed into the passenger cabin and were loaded into a luggage cabin.

The first part of the journey, up to Hindon (where it makes a short stop) is the most scenic. It's a stunning landscape of yellow hills, rocky ravines as the train chug along beside the Taieri River. 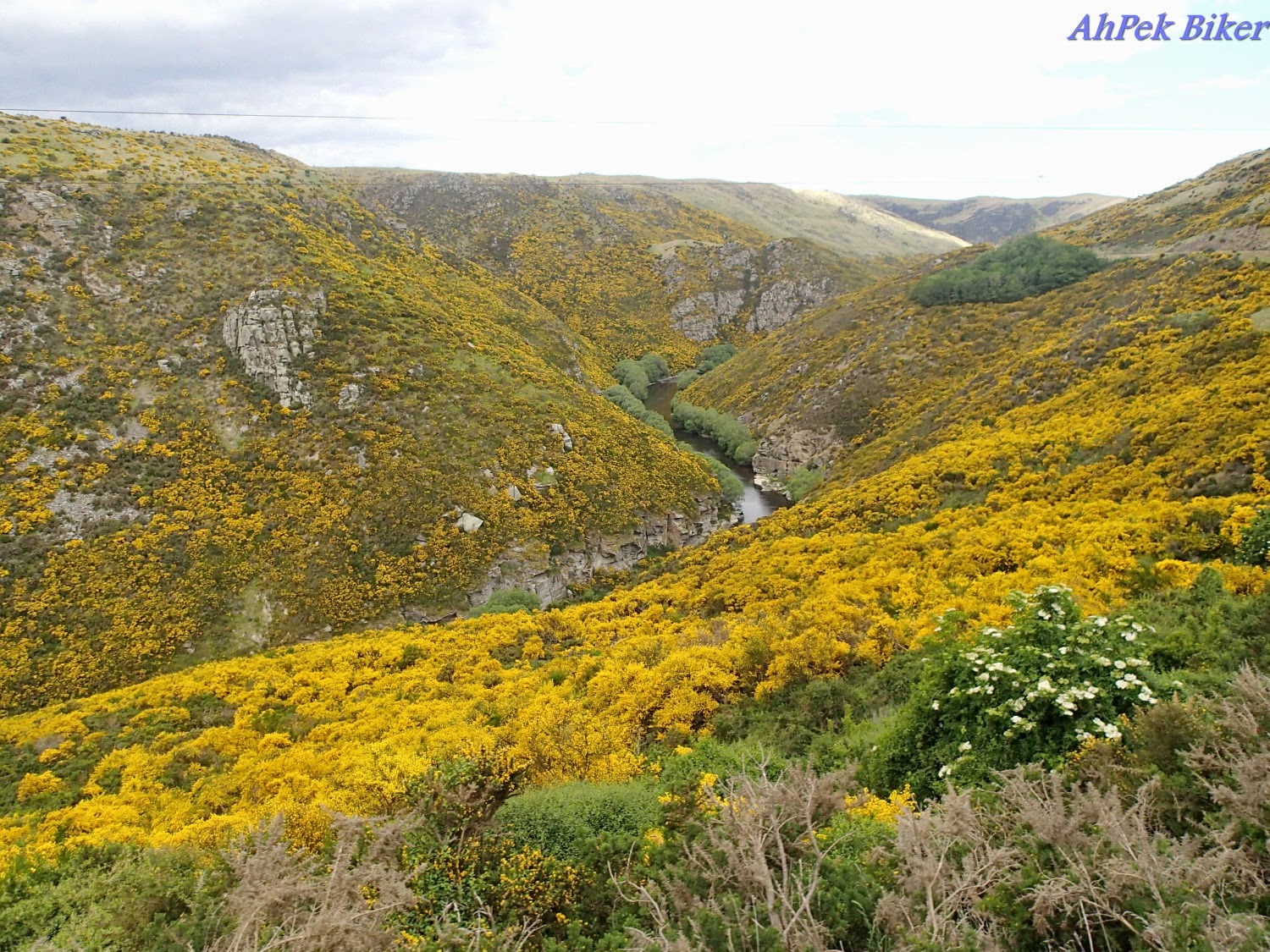 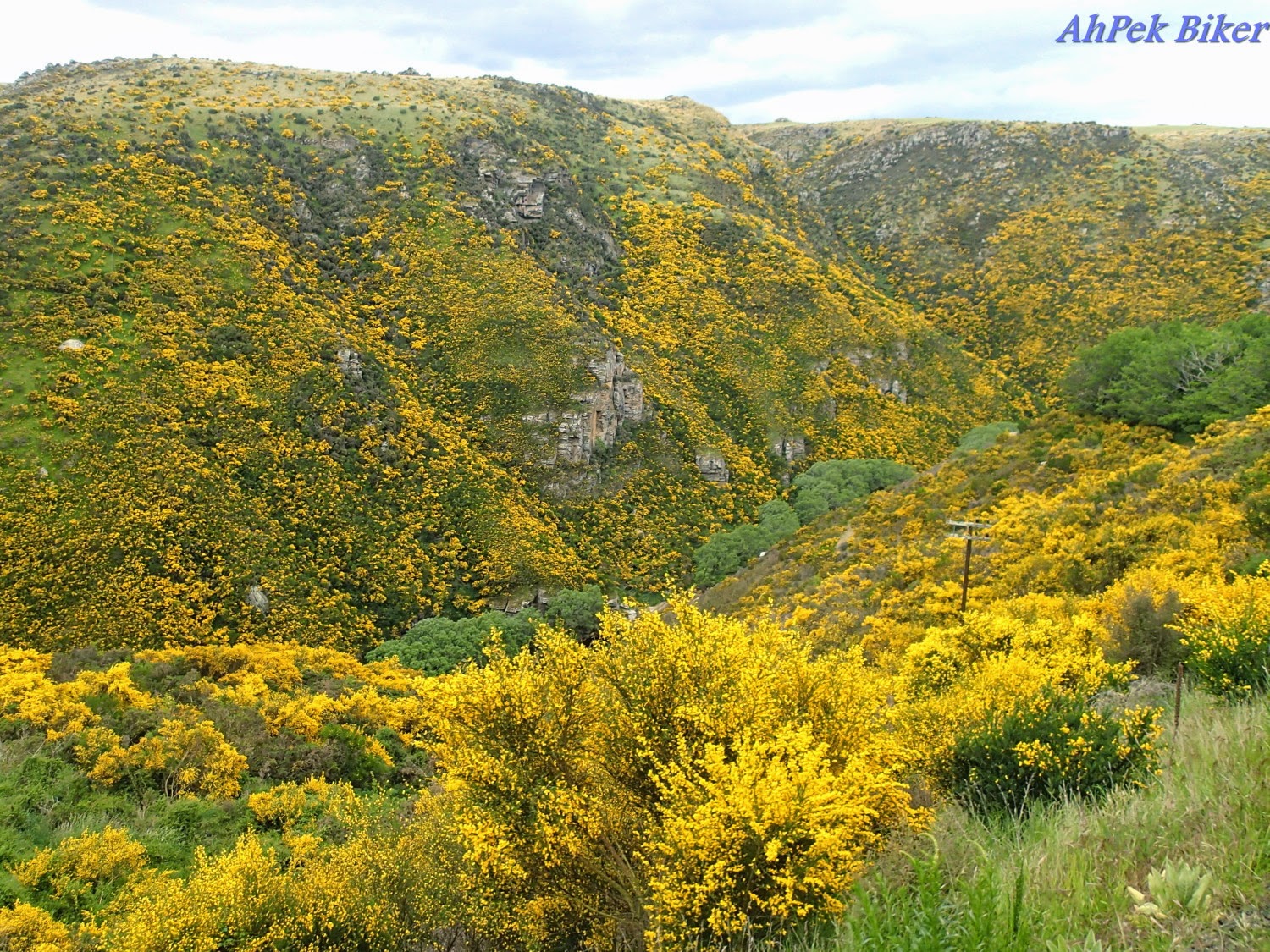 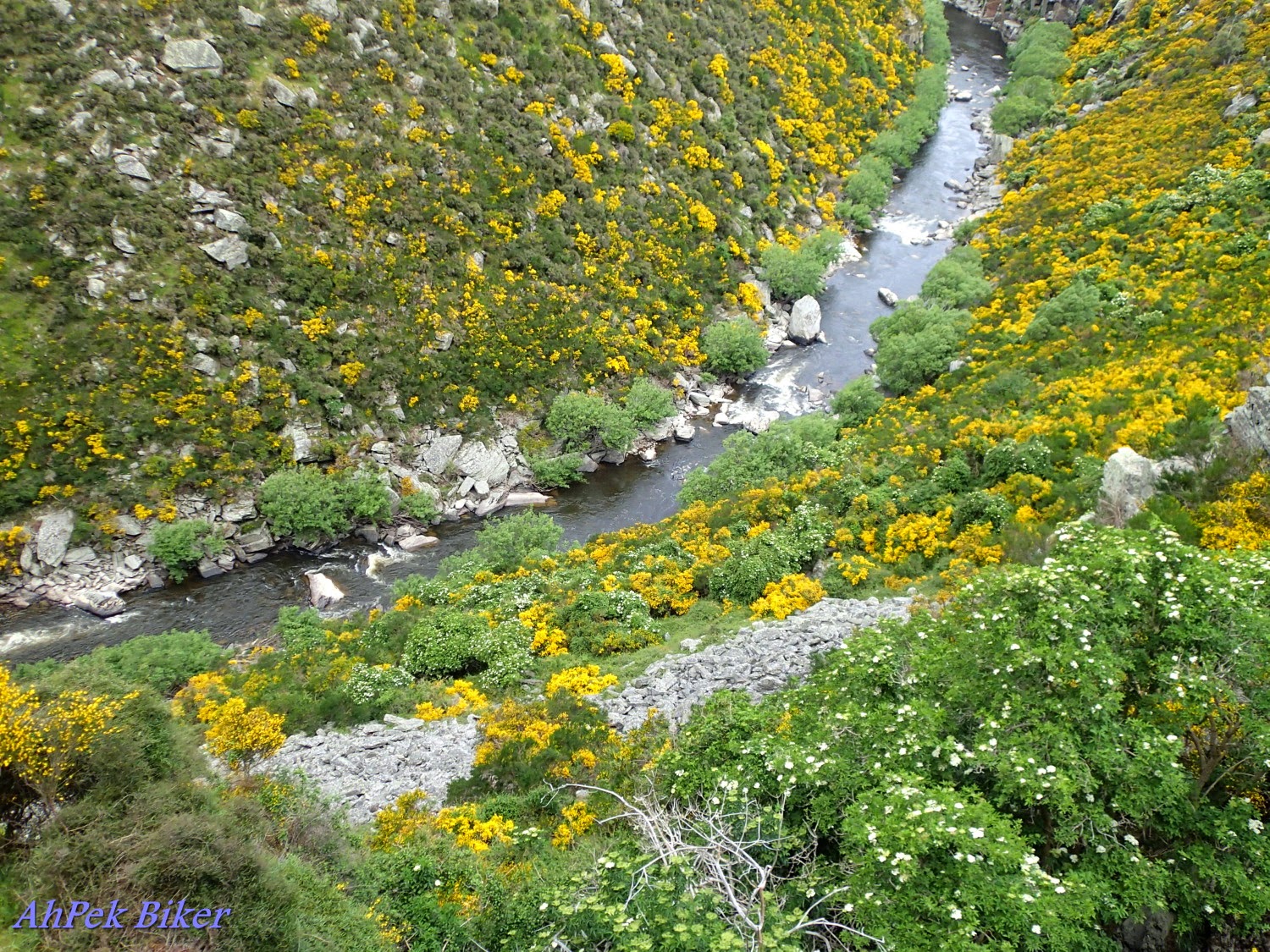 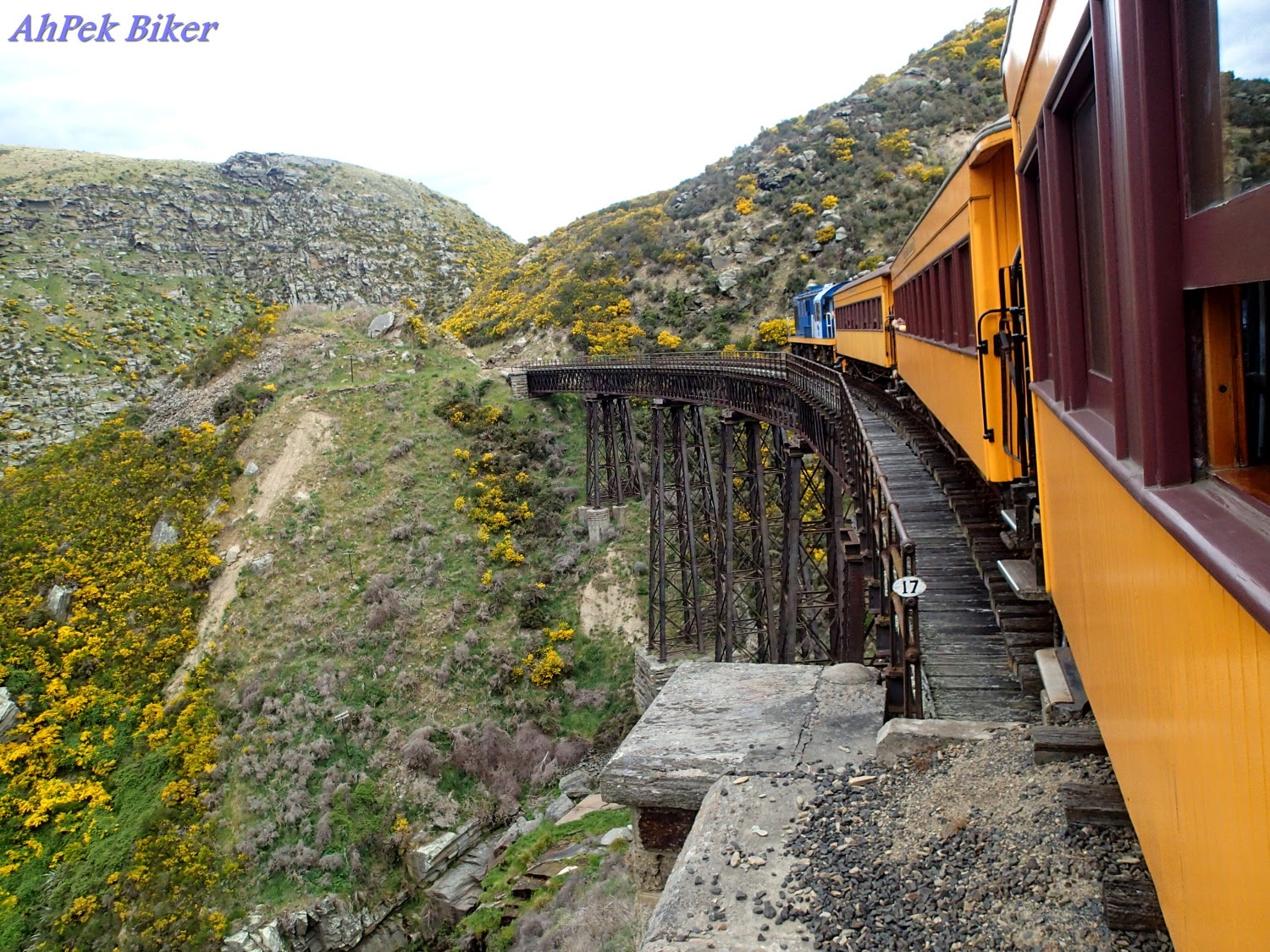 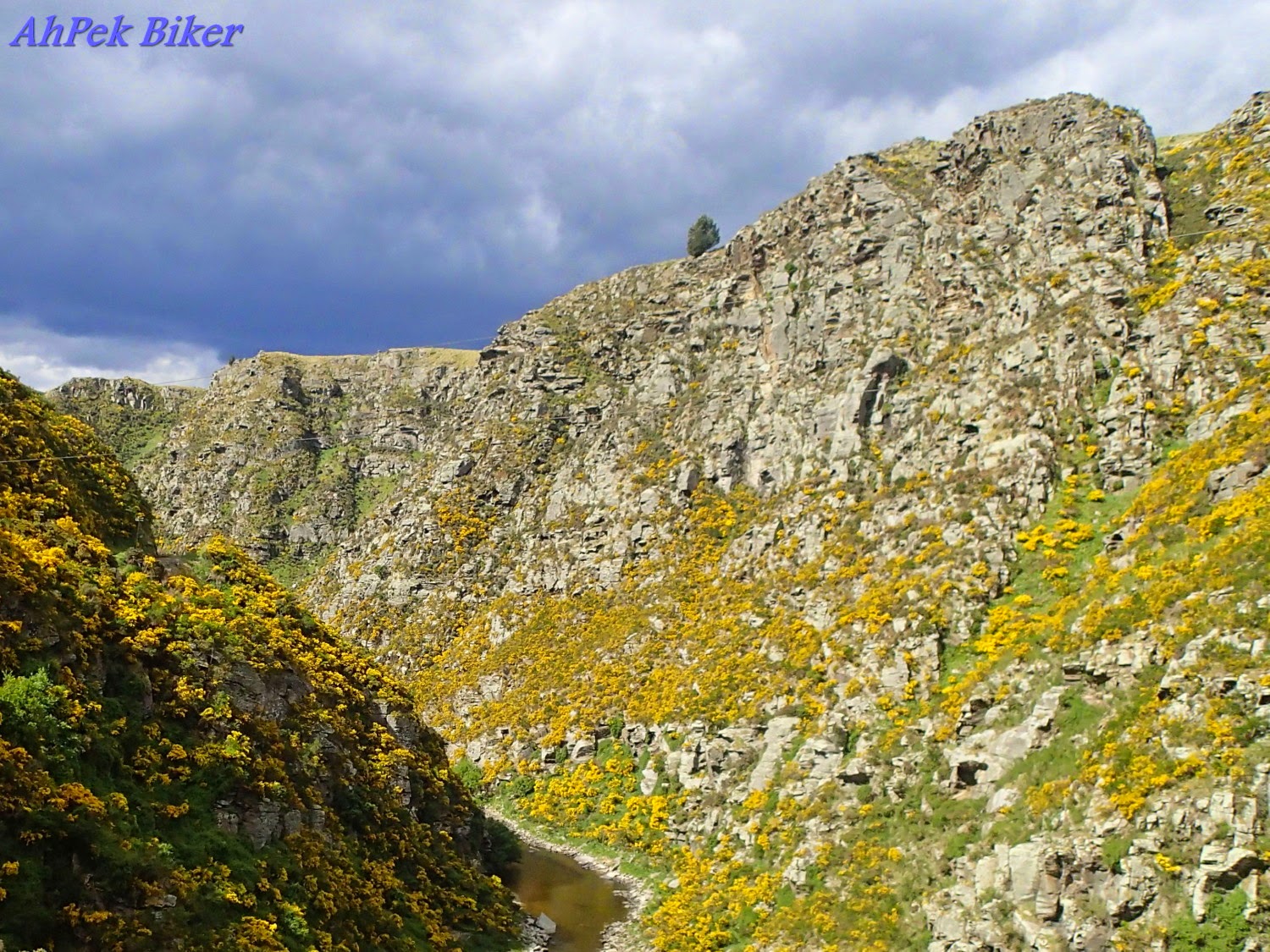 6:45pm - Our train arrive at Dunedin Train Station. Over a hundred years old (it opened in 1906), the station building is an impressive looking building of Flemish Renaissance style architecture. 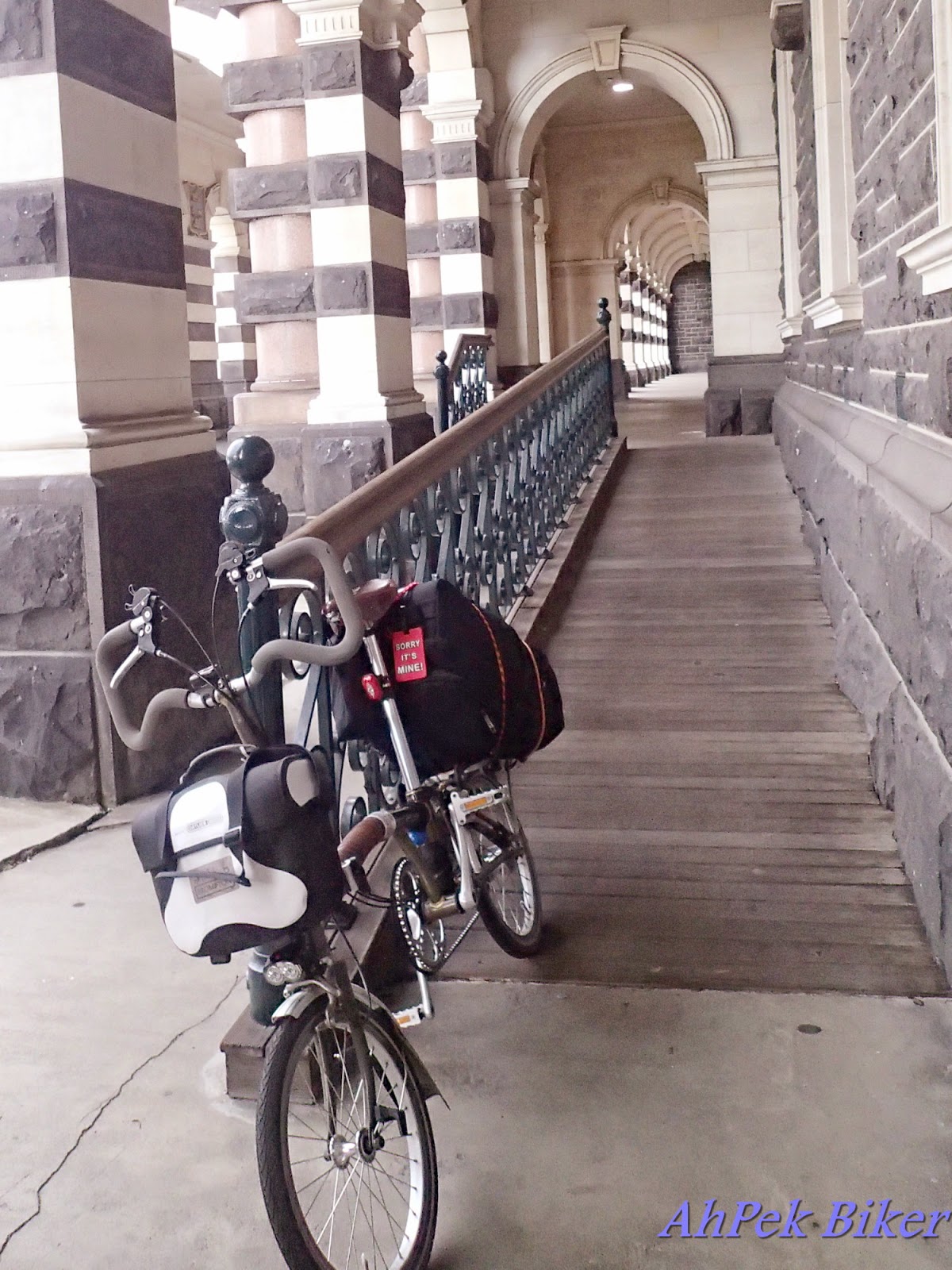 Quickly disembarking, we unfolded our bikes and strap on our luggage. My buddies were using the Brompton T-Bags; I had opted for a travel backpack with roller wheels. Somehow,  using three bungee cords, I managed to strap this large backpack to the bike's rear rack. It was a rather fully packed bag, other than my clothes, the balance of our grocery was in it making it weigh a total of 15kg.... Hah! that's even heavier than the bike. 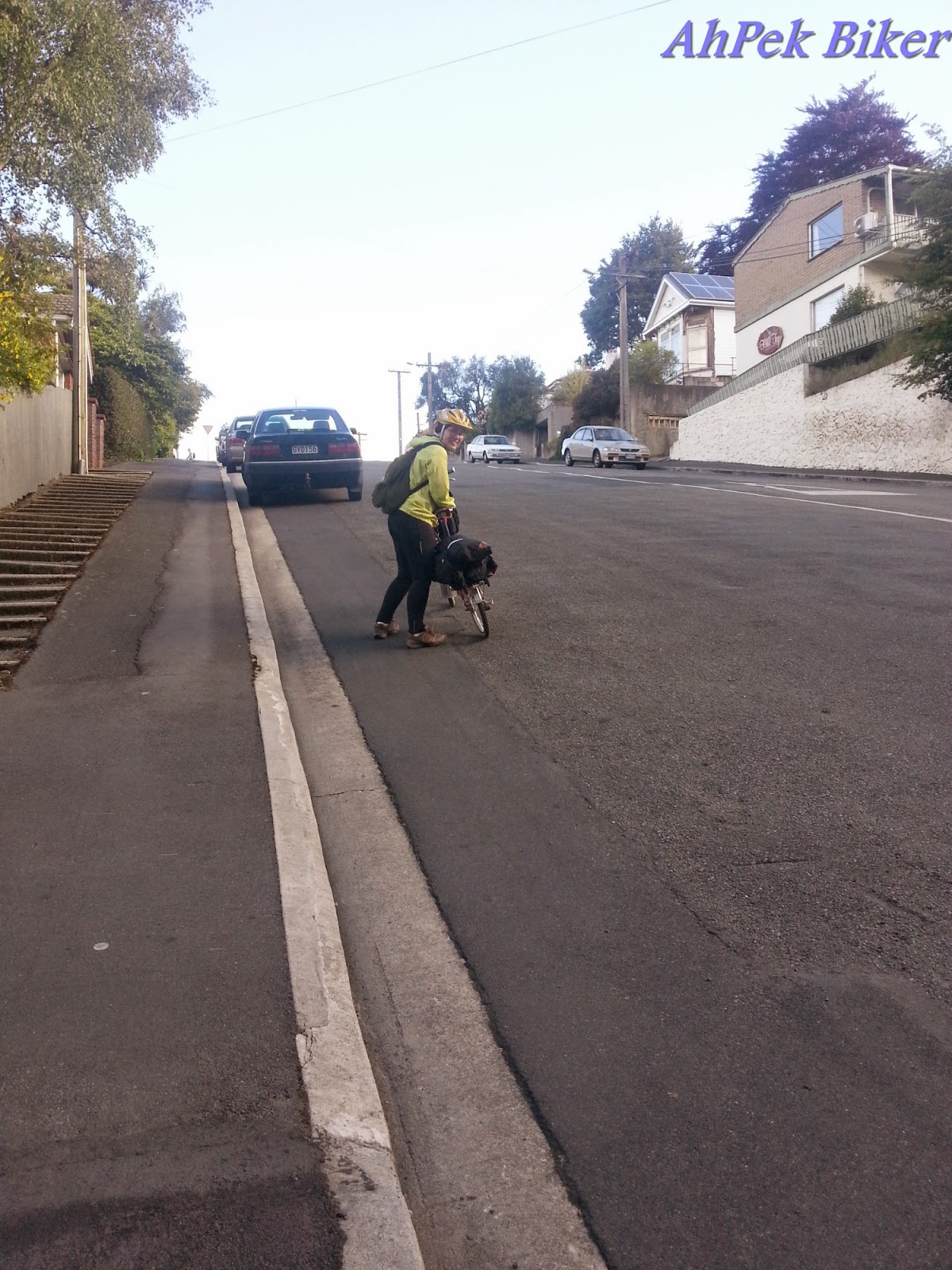 That heavy load was to take its toll on me. Dunedin sit on hills and most of its roads are steep. In fact the world's steepest road is not in San Francisco as many would think, it is Baldwin Street in Dunedin.
Casting our pride aside, we just came down and pushed. 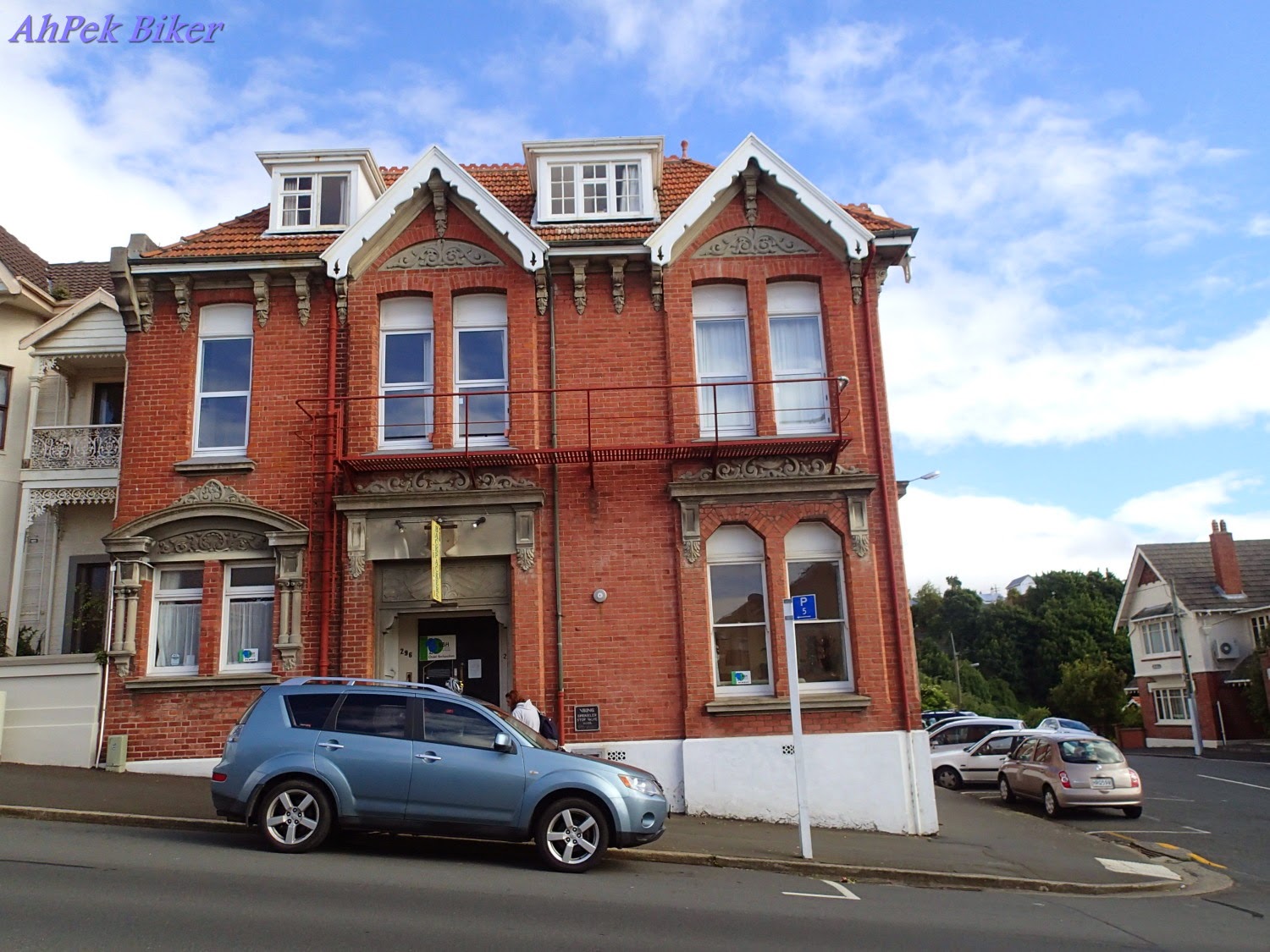 Our home-stay, the Chalet Backpackers at High Street. Looks nice doesn't it, I thought so too until I found out about its past. 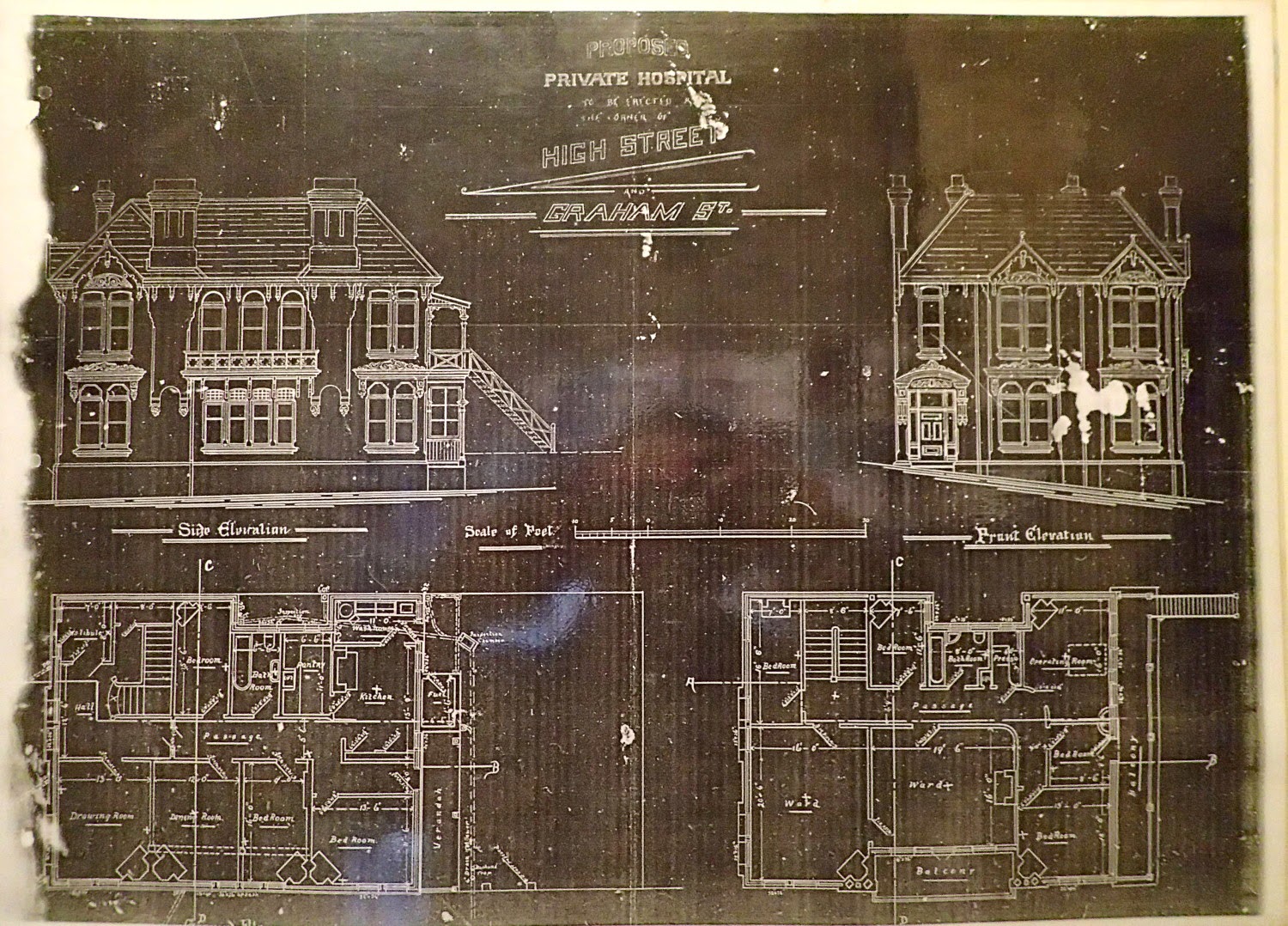 We had just finished dinner and were getting ready to bath and call it a day when I noticed these blueprints of a building on one of the walls.
Hey! This looks like our building!
IT IS OUR BUILDING!
Damn... this place used to be a hospital.... people must have died here before... eerie!
In fact the owners of this home-stay played on the ghost theme, putting up ghostly caricatures at ceiling corners and even mentioned a resident ghost in their brochure.

Double Damn! The rooms don't have attached baths, these are away in a dim room down a dark corridor. I prayed that I won't have a Ju-On moment while taking my bath, that a greenish hand will not reach out and help me shampoo my hair.
Later, I just pulled the blanket over my head and hoped for an undisturbed sleep.
.....shivers.....