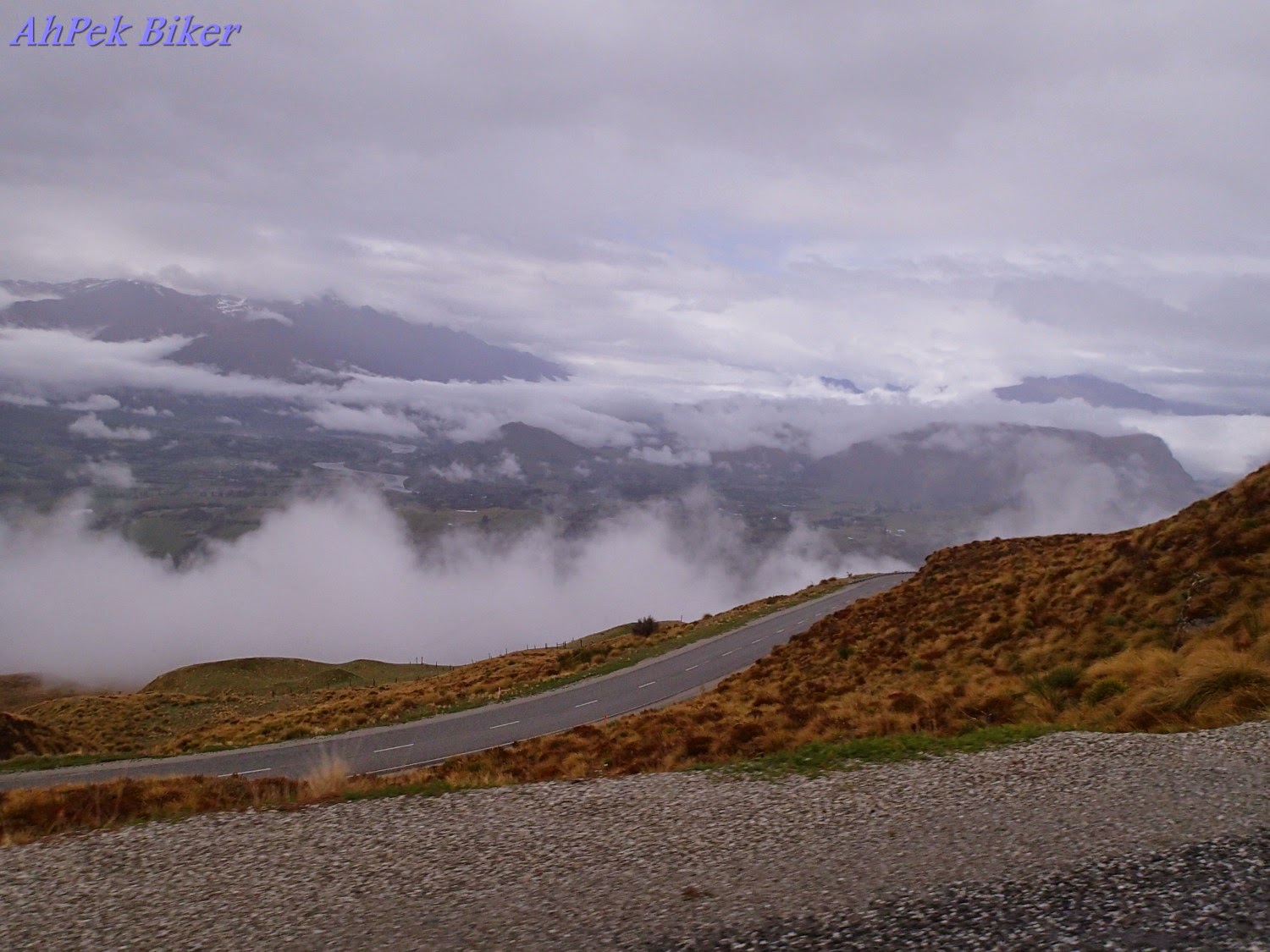 ~~Good Morning!~~
Actually it wasn't such a good morning. It had been raining from since the previous night, and the skies are still gloomy and crying down rain. Rain or no rain, it's no point staying indoors, we took the van out and dropped Siew Yung at Queenstown centre as she wanted to do a cyclo-exploration of the town. Then we headed for Coronet Peak, which is the skiing station for Queenstown.
The road up to Coronet Peak winds up the mountain: at stretches it is quite steep with sharp bends. With the rain and misty roads, we had to drive very carefully. 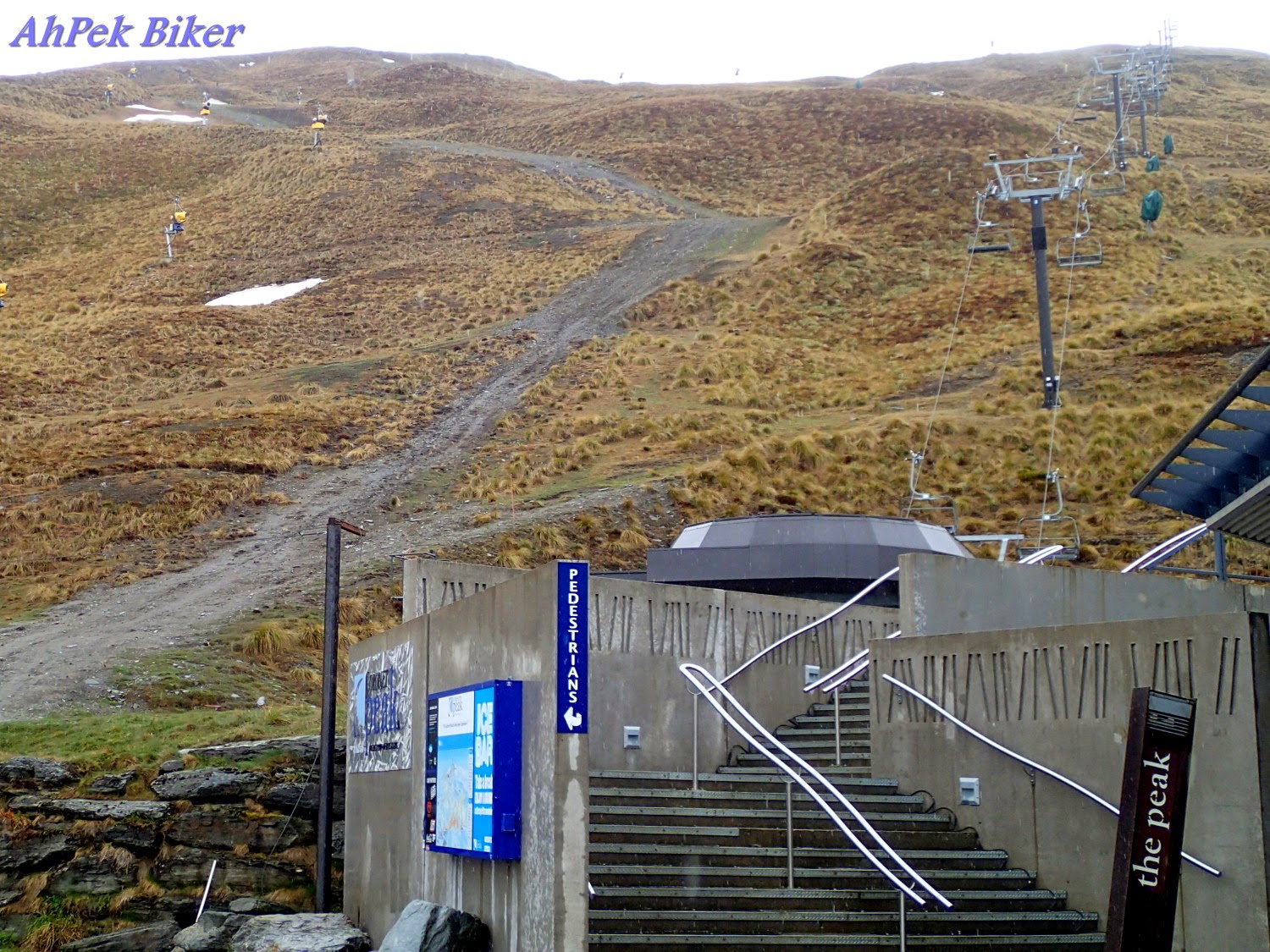 There was nothing much to see at the Peak; see it was spring coming to summer.
So there were the ski-chairs hanging idly over the brownish hill and no snow!
We were just some tropical bumpkins keen to see how a skin resort looks like - snow or no snow, Heh... heh... 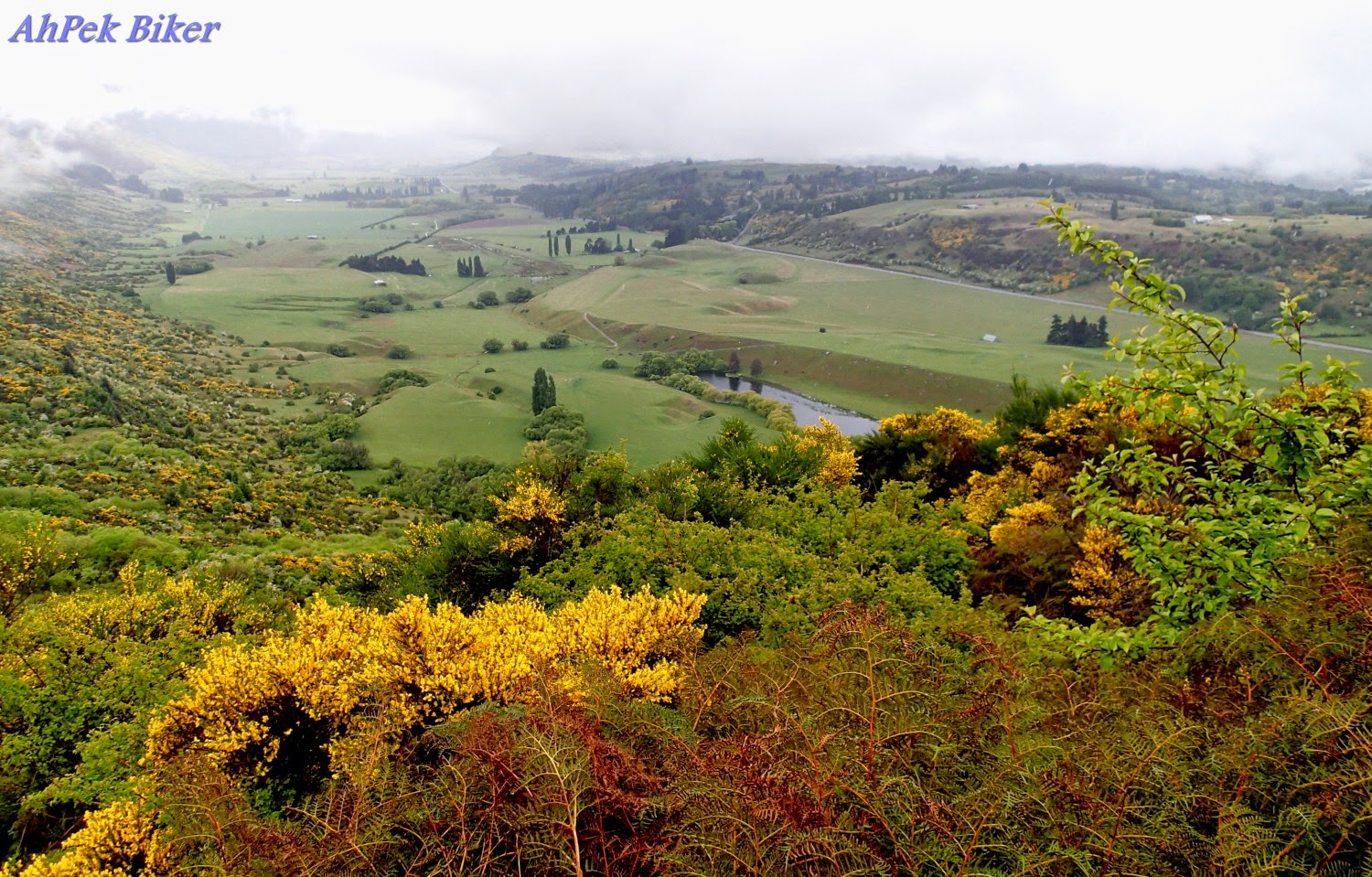 As we drove down, the misty cloud lifted and we had a grand view of the valley below; well at least this made our trip up somewhat worthwhile. 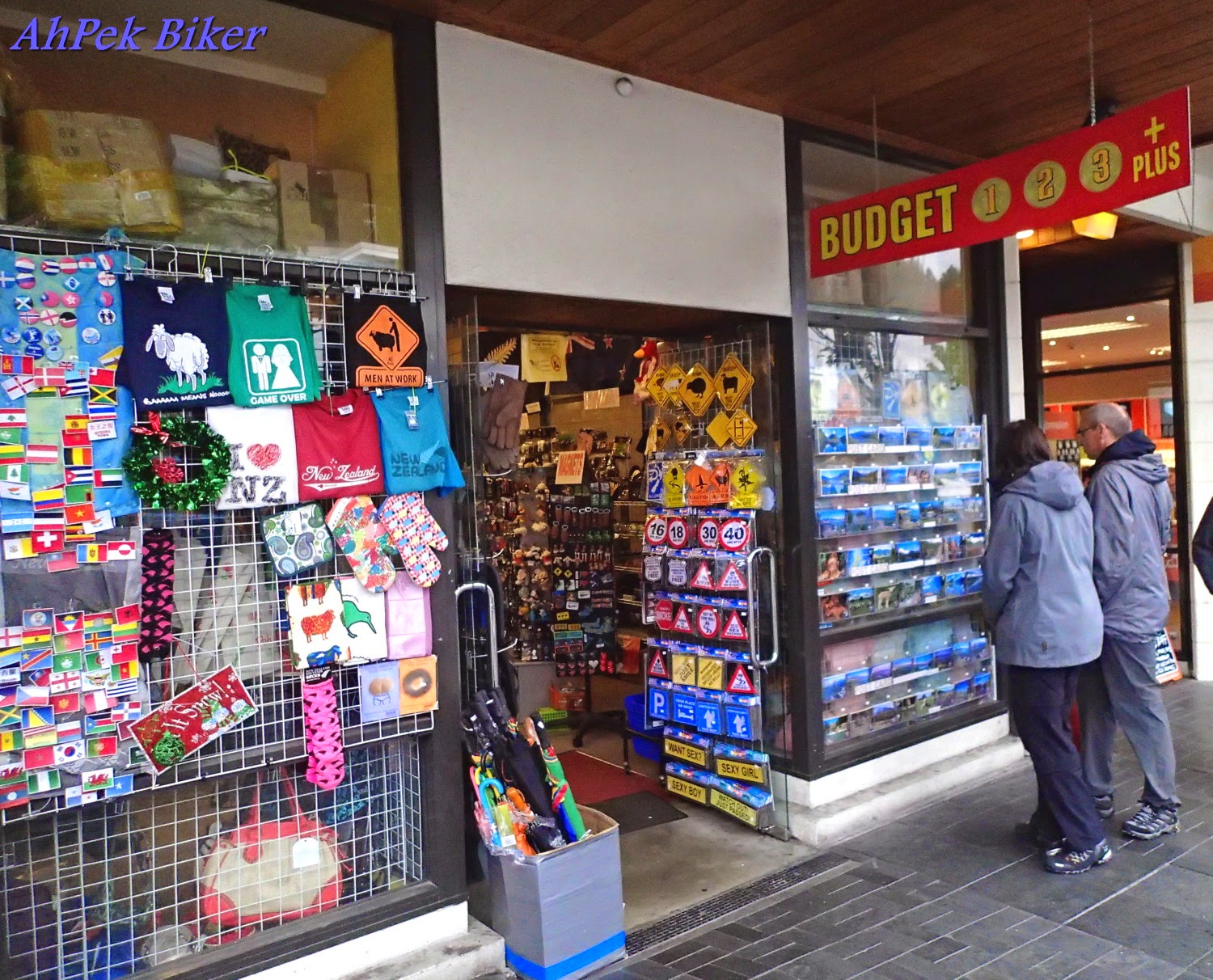 Back in Queenstown it was still raining. We bumped into Siew Yung (the town centre is not that large, so it's easy to "bump" into friends); she had not been able to cycle much on account of the rain. Together we decided to walk around and do a bit of shopping, mostly at this Budget shop at Shotover Street. They sell reasonably priced souvenirs and other useful items.
I had not thought it would be raining in NZ and did not bring over a raincoat; so I got a couple of those cheap pocho-type raincoats for NZD3-00 each. It was either these or spending close to NZD100-00 for raincoats from the nearby sports shop. Later I was to regretfully find out that the poncho raincoats did not work that well in the cold windy weather. So a lesson learnt - DON'T FORGET THE RAINCOAT! 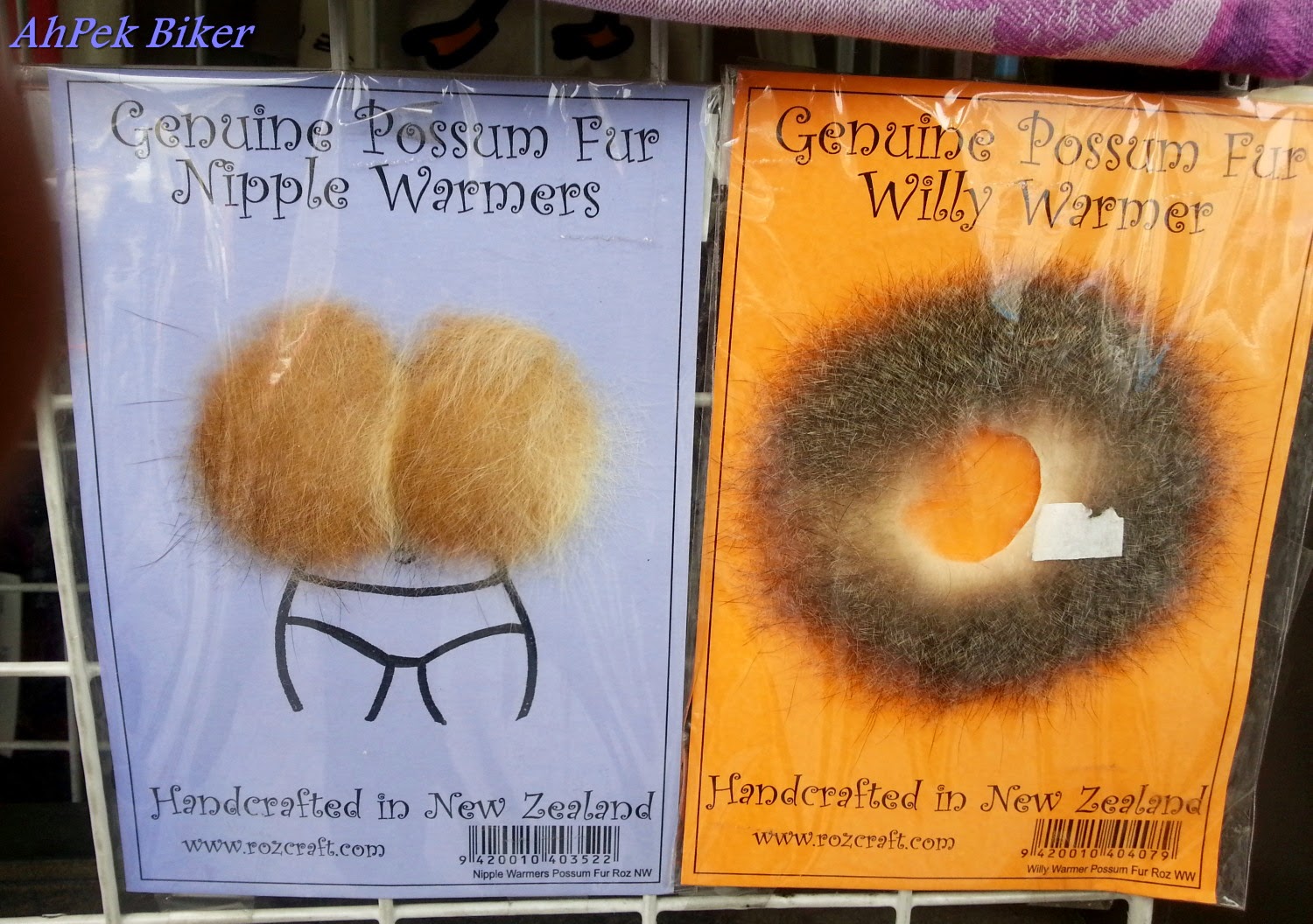 The shop did sell the above two interesting items.
In the cold rainy, windy weather, I was most tempted to buy the Possum Fur Willy Warmer whatchamakit. A friend did advise not to as there could be risks of having an itchy crotch; who knows what those spunky possums had been up too.
Another friend gave a useful tip, the Willy Warmer can be put round the hub gear of my Brompton and act as an auto cleaning brush! 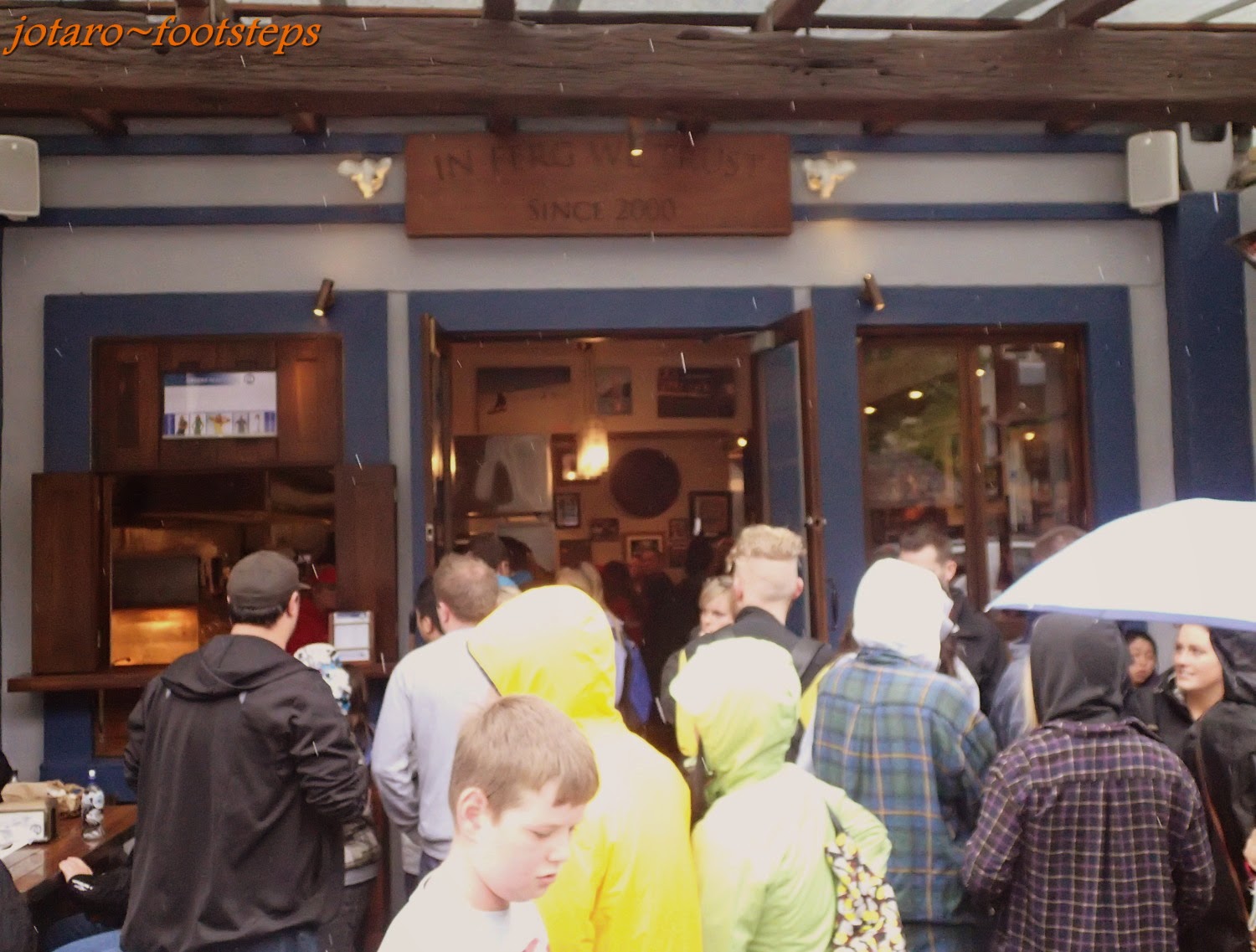 We popped over to Fergburger on the same street. This burger is renown and is a favourite among locals and tourists alike. The long queue stretching from indoors to outdoors attest to this. It easily a fifteen minutes queue to make an order and another fifteen minutes wait for it to be served. The place does not have that many seating so many made orders for take-aways, so did we. 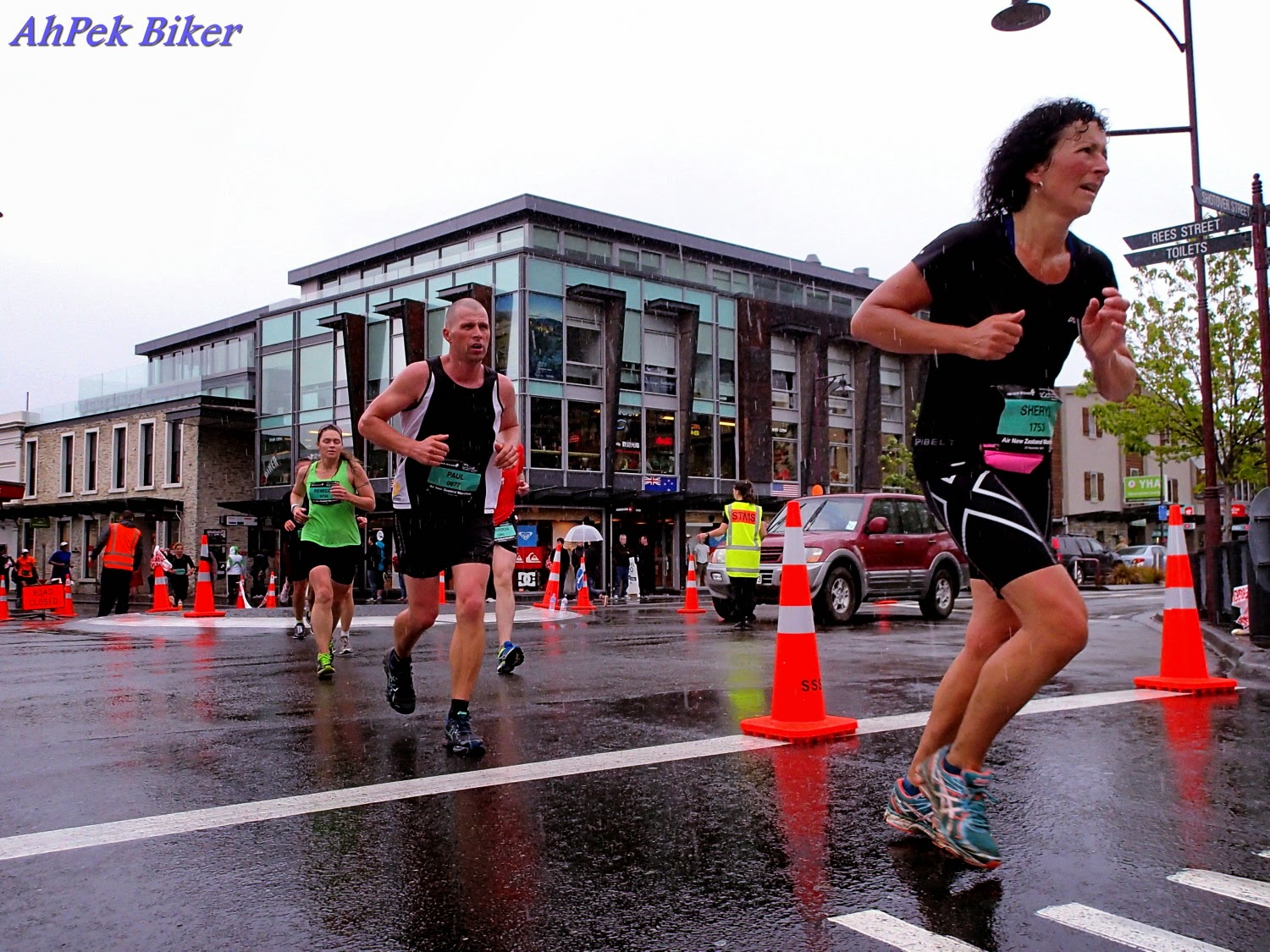 While my buddies were queueing for the burgers, I walked around a bit and witnessed these runners taking part in some Marathon. Eventhough that I was wrapped up in bundles of clothes, I myself was feeling downright cold in the rainy weather; so I can imagine how chilled to the bones these runners must be! Brrrrrrrrr! 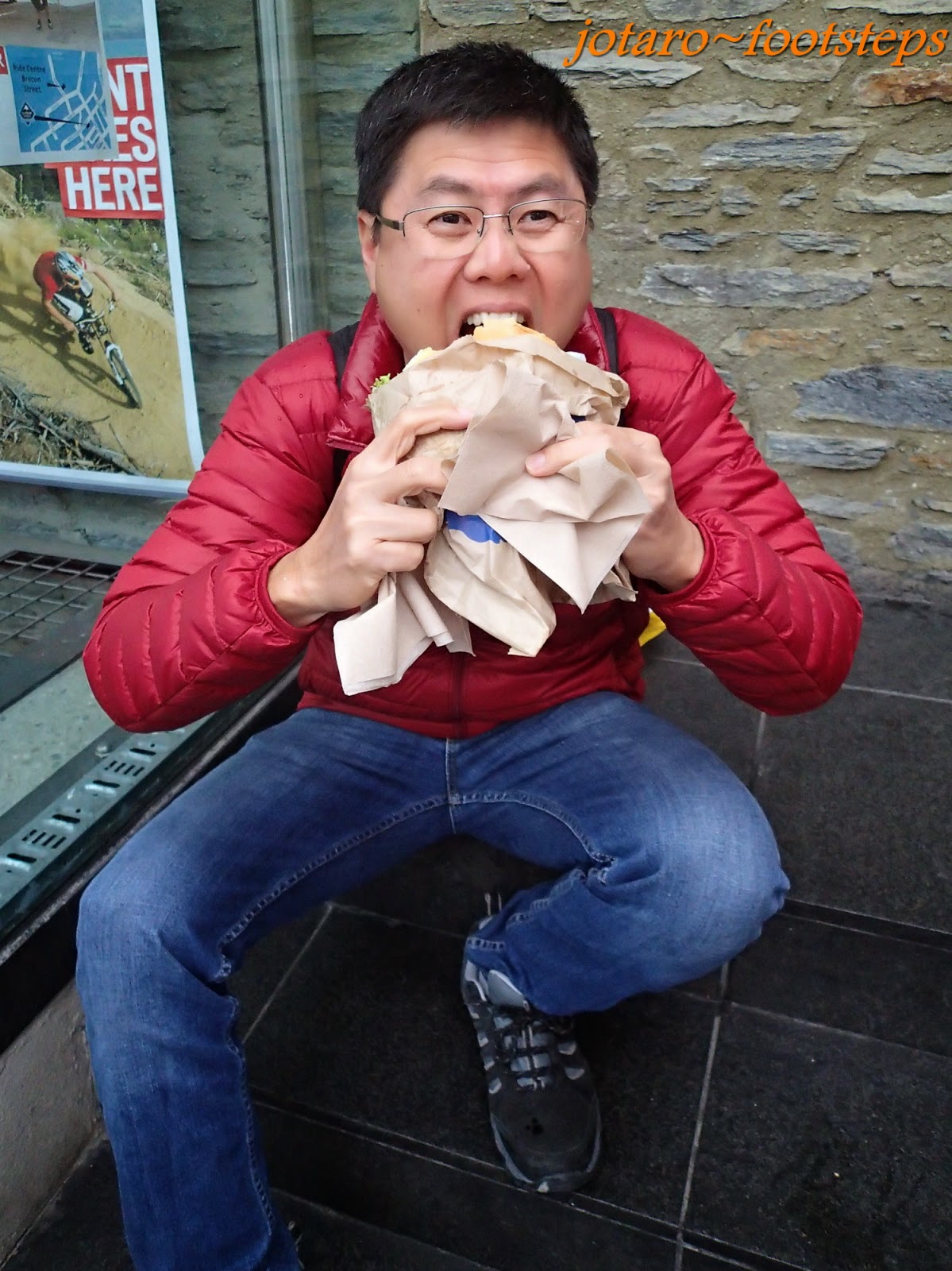 Our Fergburger came, and they were HUGE needing two hands to hold on to and big bites to chomp down onto. The wait for them were worthwhile; with juicy, tender patties and overflowing veggies; for me they are the best burgers in the world!
(... see more of Fergburgers). 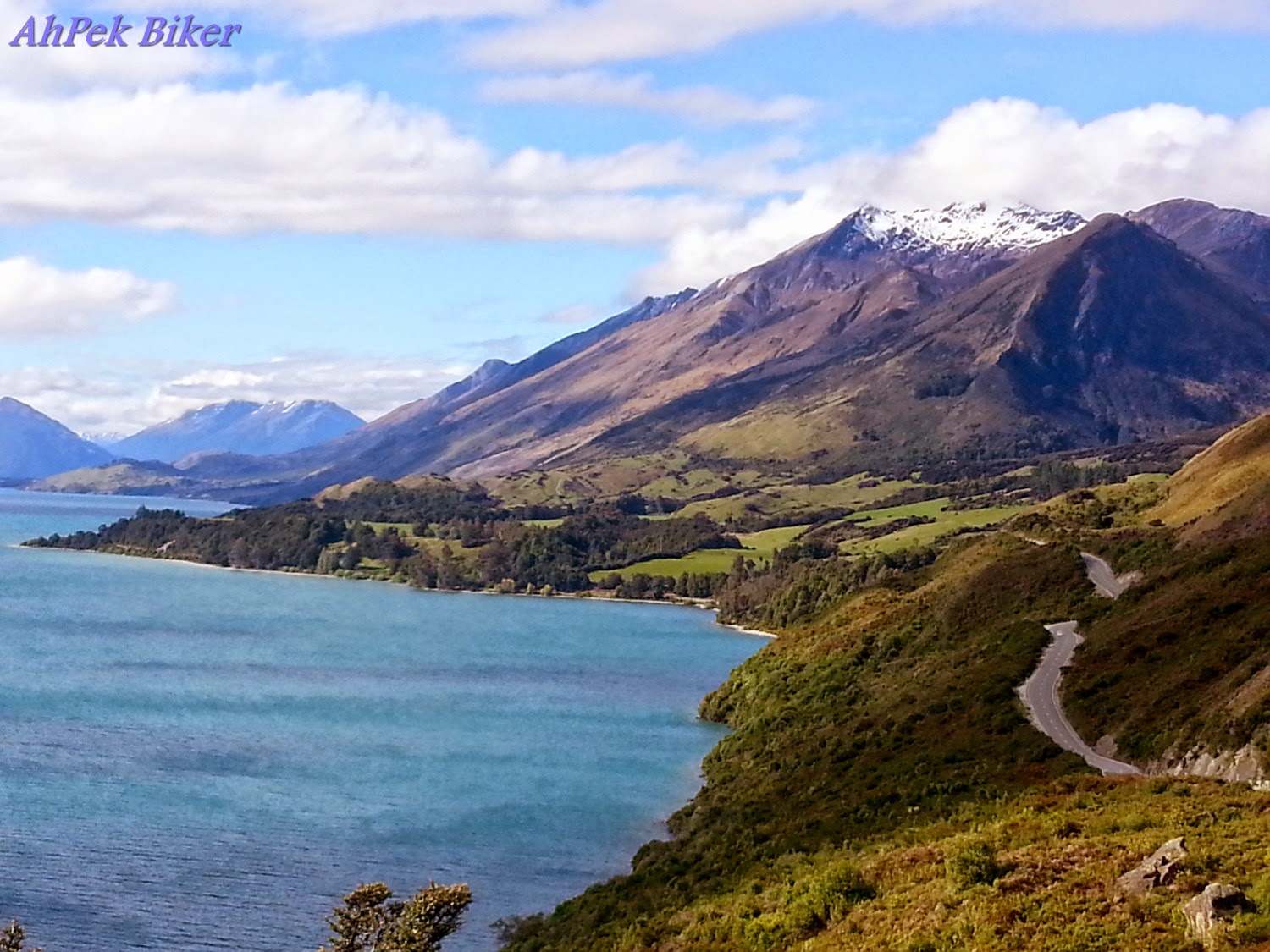 5:00 pm - It's Lord Of The Rings time as we headed down the Glenorchy-Queenstown road to the place where the movie was partly filmed. We were lucky! The sun had decided to be friendly and had come out shining bright.
The road meanders up and down beside Lake Wakatipu and as it got closer to Glenorchy rolling green pastures can be seen. Are these the famed filming sites? I don't think so, beautiful as they are they don't seem large enough for those large battle scenes. Perhaps those are further down the road. 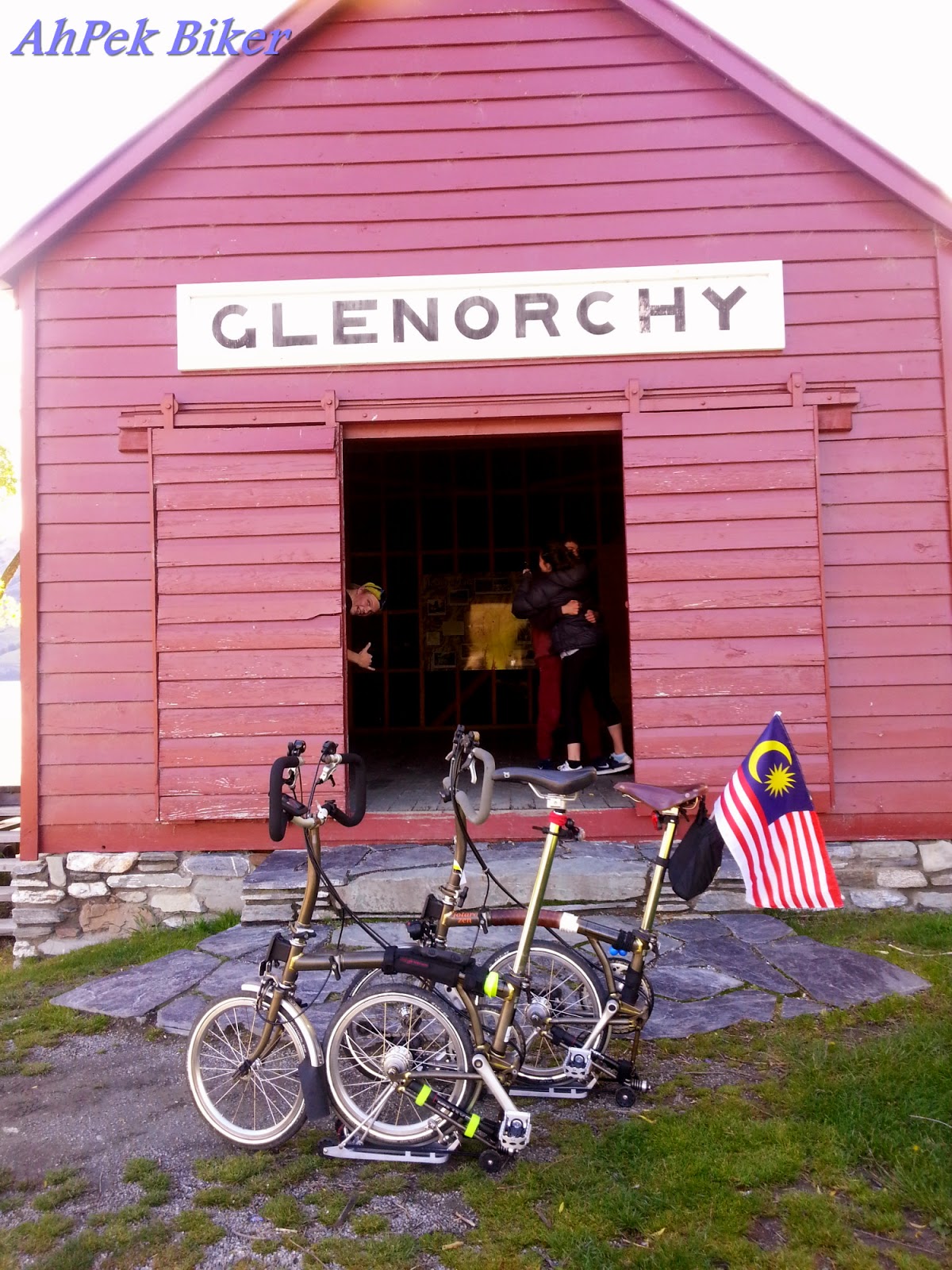 At Glenorchy, we parked near the famed Red Boat House, got our bicycles out to start cycling.
Inside the boat house are photos and charts giving details about the town and its history.
A few local teenagers were hanging around inside, every once in a while dancing to music coming out from their mobile phones. 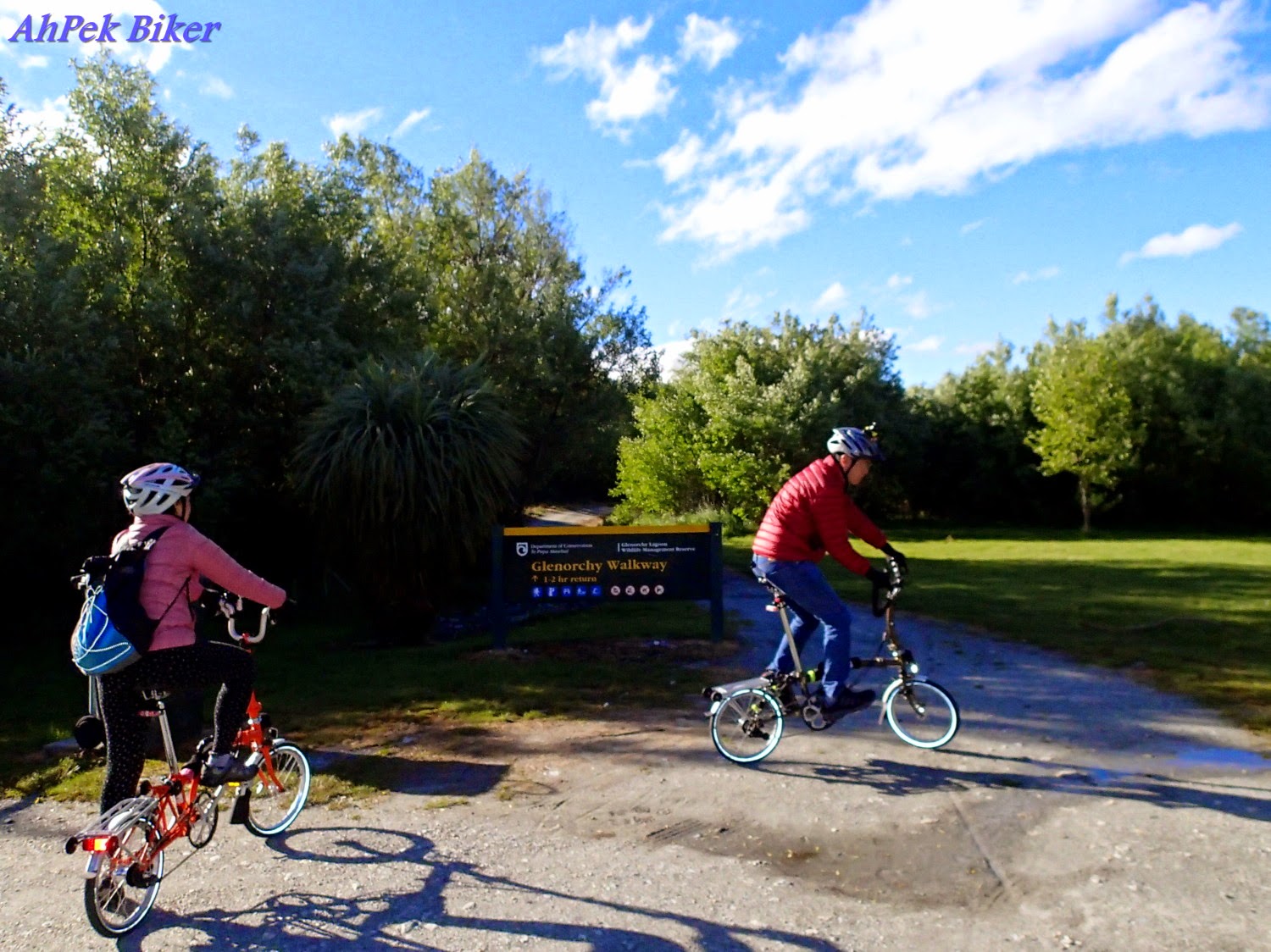 We cycled east towards the Boardwalk at the north-east wanting to try it out; unfortunately no cycling is allowed there. So we made a U-turn to cycle around the town a bit and then into the trails at the south-west.

Below are some photos of the area we cycled through: 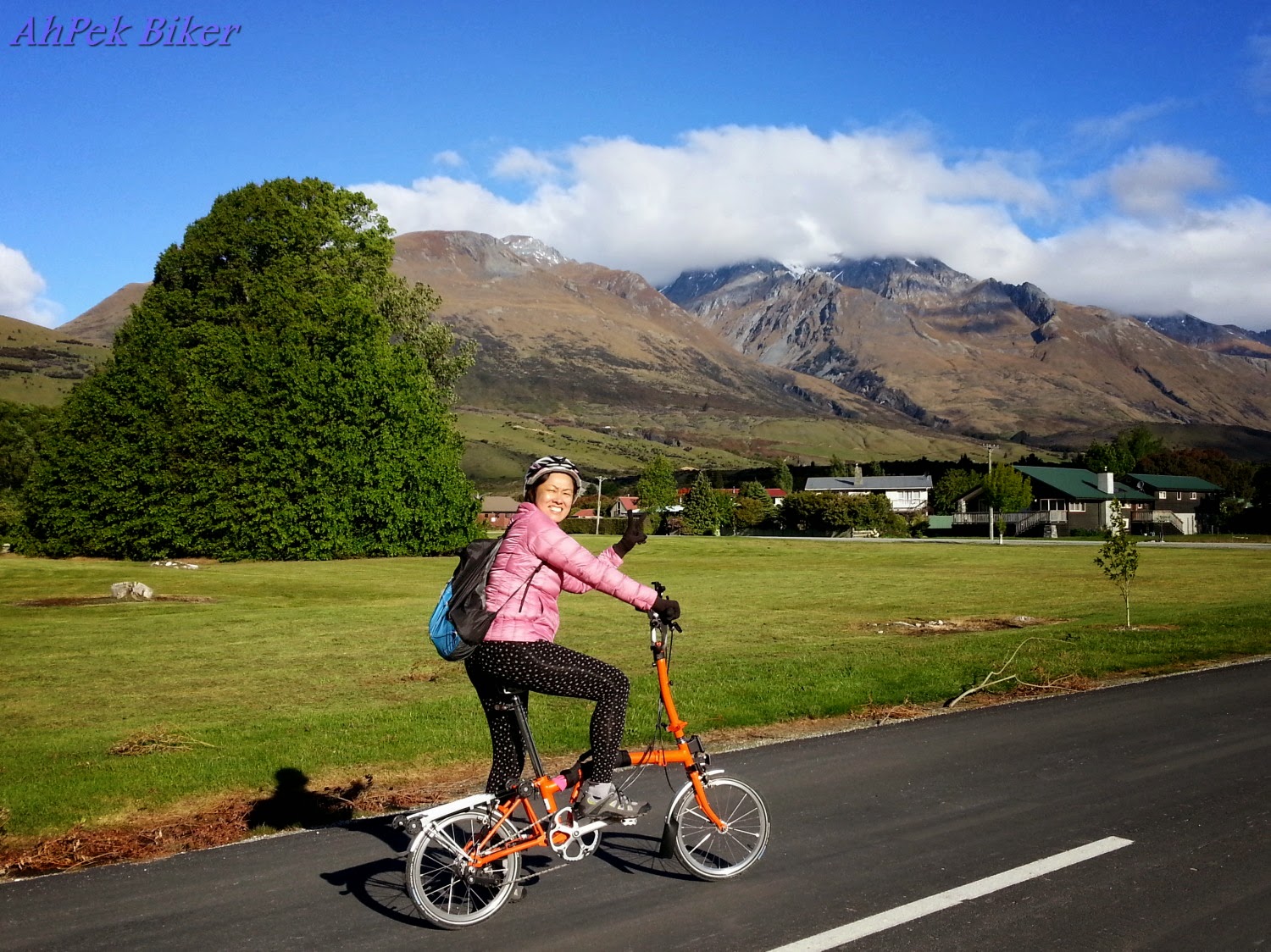 At Glenorchy town with the Mount Larkins range in the background.
We did not find the filming sites of the Lord Of The Rings movie; perhaps we should have taken the town's tag line of "Gateway to Paradise". Perhaps it is at the area off Paradise Road in the north, near to the Mount Alfred and Diamond Lake; perhaps we should have gone further north. Hah! A lot of perhaps... 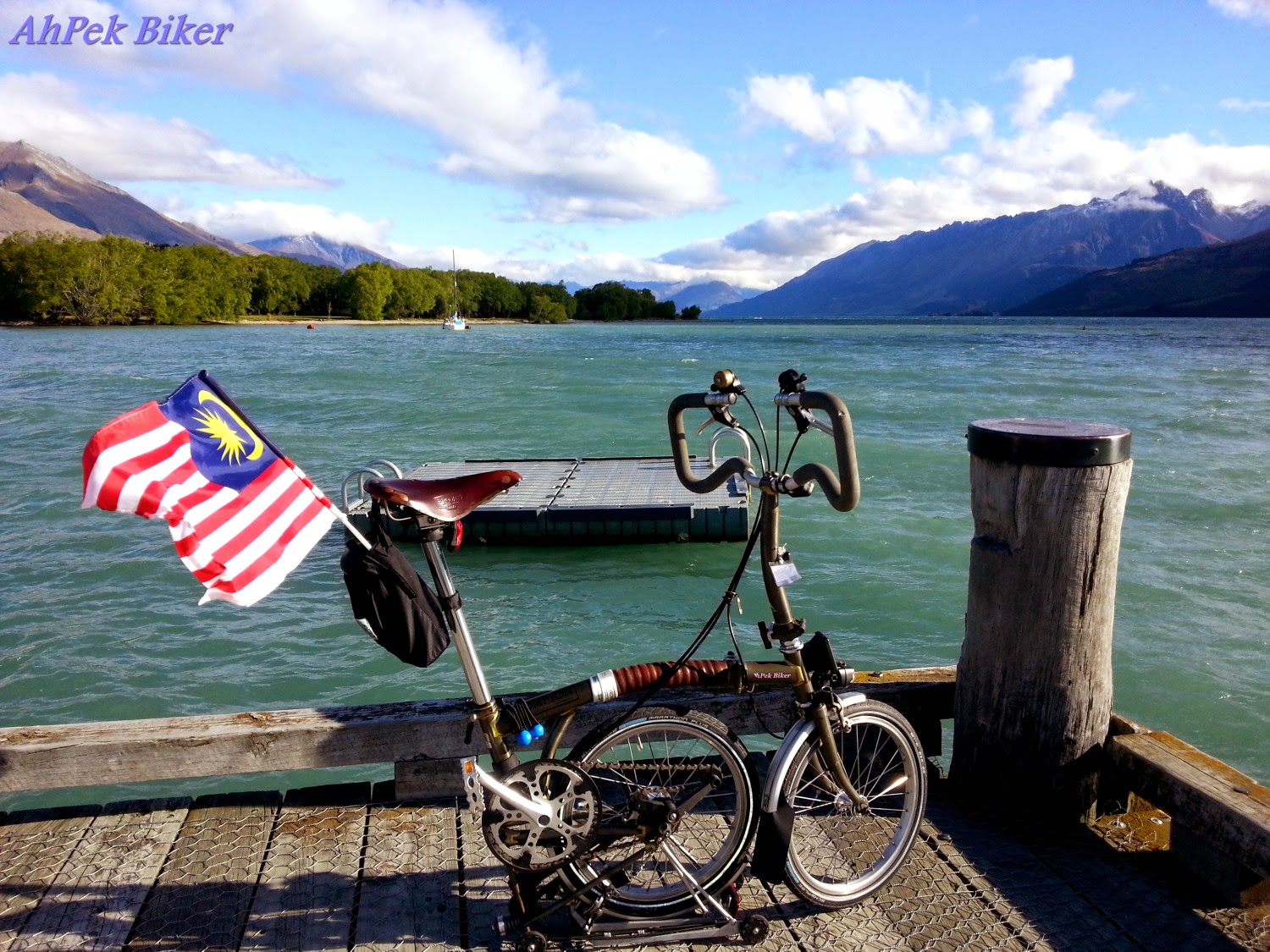 My Brompton parked at the far end of the boat pier. Glenorchy region is also know as the Head Of The Lake, as it lies at the northern most point of Lake Wakatipu; at its head so to say. 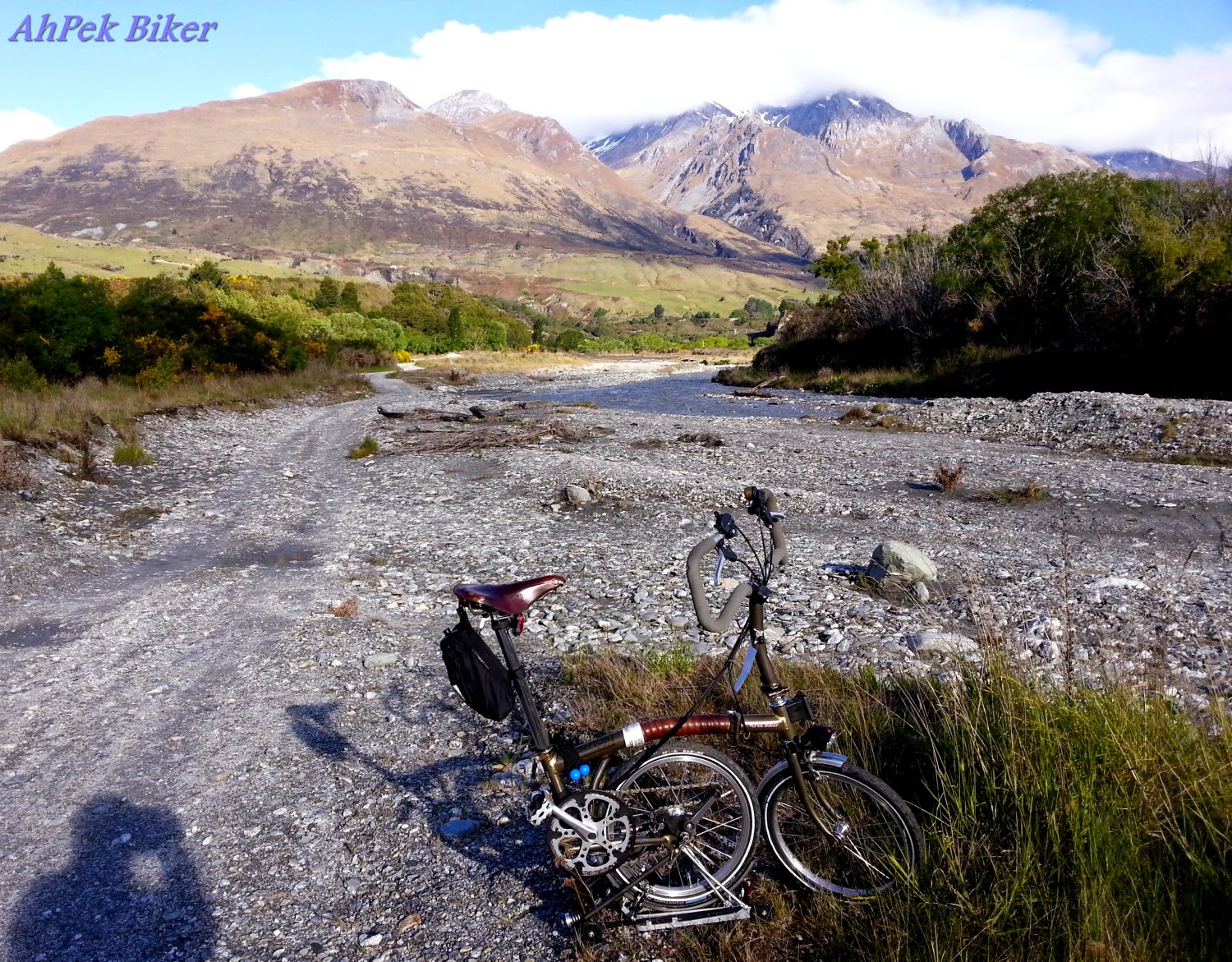 At the gravel trails on the south-western part of town. 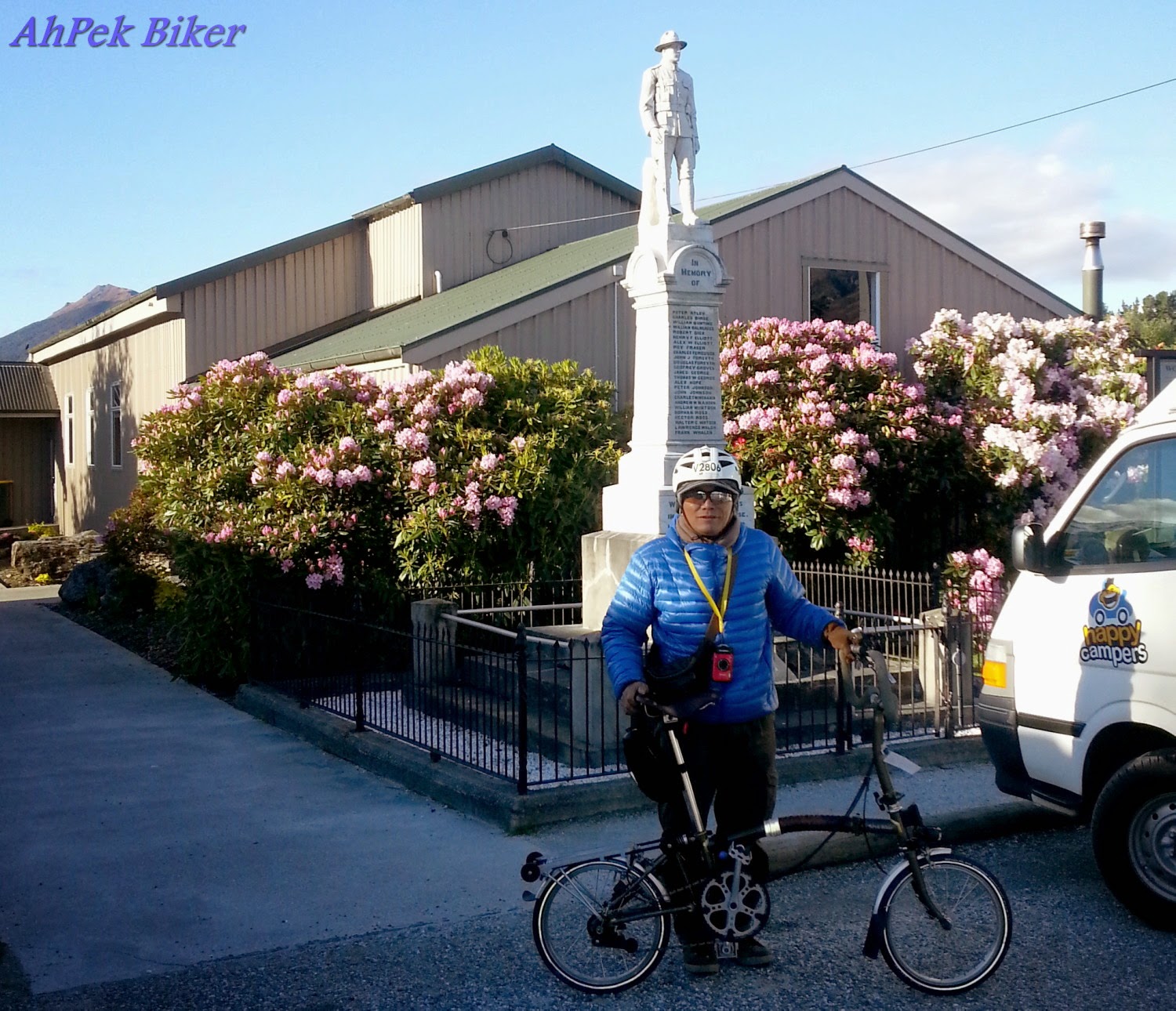 At the Fallen Soldier Memorial; a memorial dedicated to the sons of the Head Of The Lake area who gave their lives during World War 1. 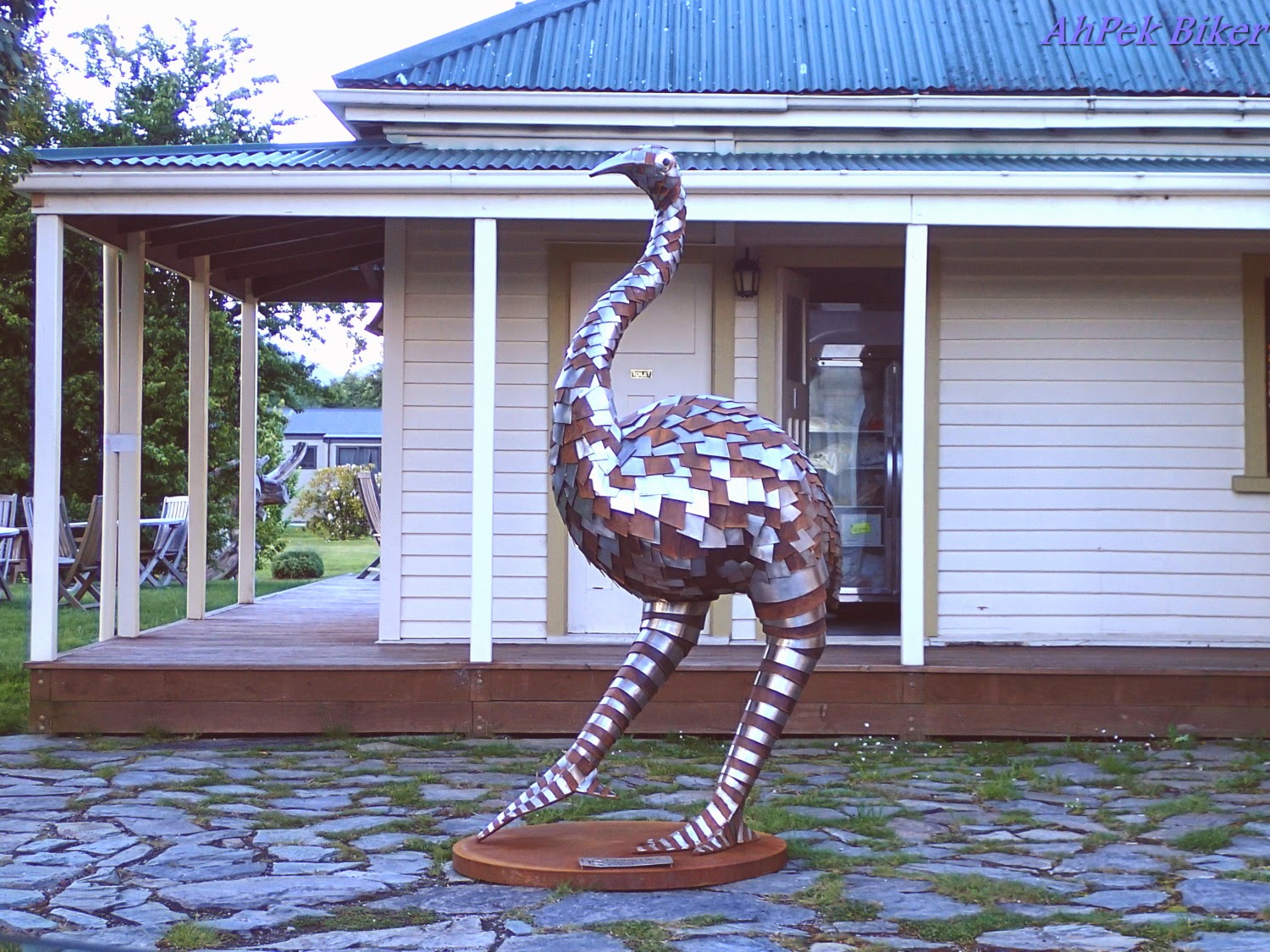 Statue of a moa made from mirror glass.

8:30 pm: Our return approach towards Queenstown was one of a setting sun of Kelvin Heights. 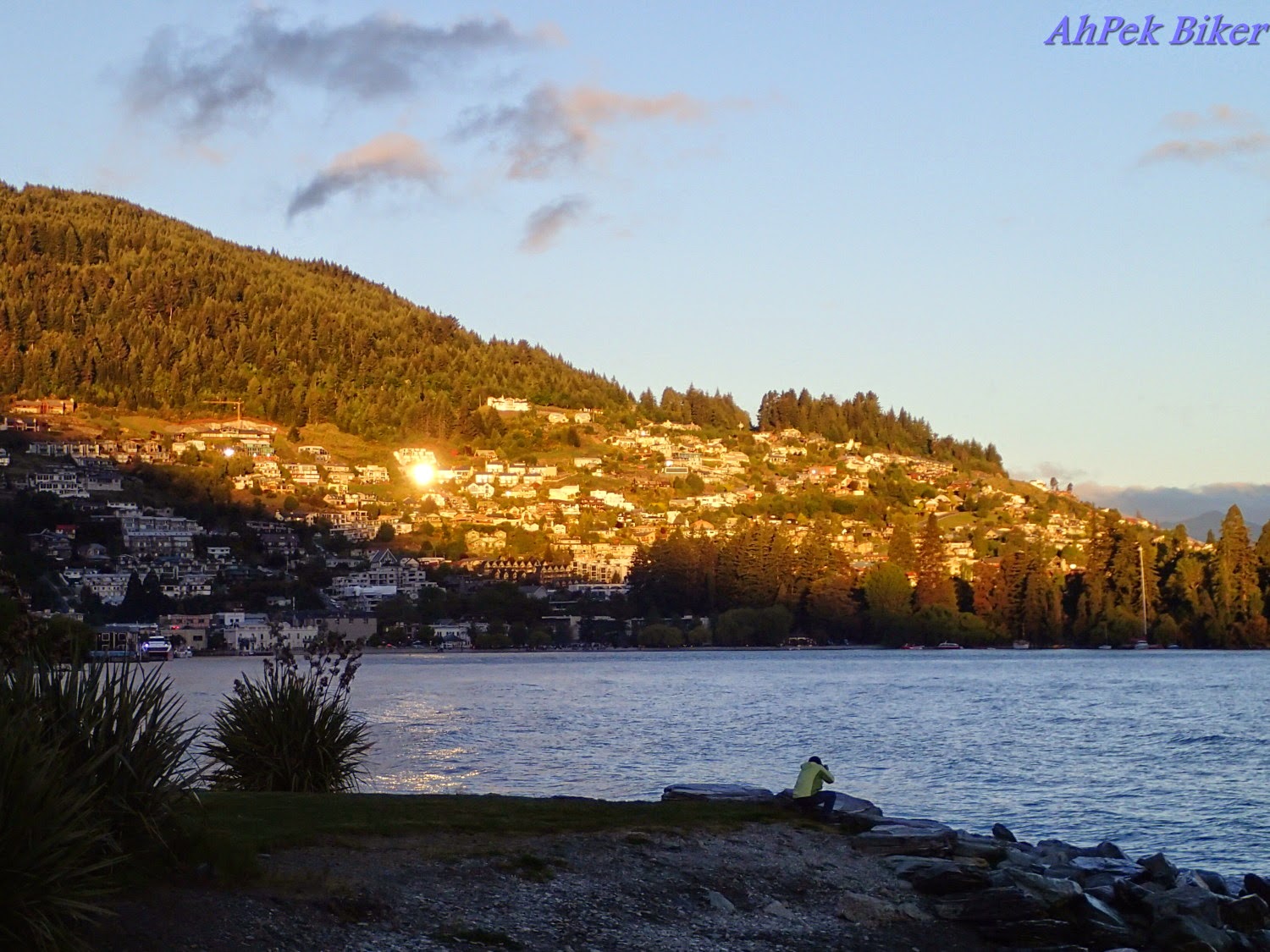 It had not been a spectacular day, but it was a diversified one. It was a day of ski mountains without snow, of wet marathon runners, of a quiet town leading to paradise; AND one of good burgers!