Penang : Bromping Over The Ferry To Guar Petai


A version of this blog appeared in the October 2016 issue of the Penang Monthly.

The MY Brompton Malaysia Group regular holds ride events for its members and every so often it holds major events where Brommie friends from neighbouring countries are invited. Their last such event was the Ipoh Mali Event held in Ipoh and was well attended with friends from Singapore and Thailand coming to join us in the fun of getting to know Ipoh.
This time round, it's up to Penang (also known as the Pearl of the Orient) a UNESCO Heritage city renown for its interesting streets of quaint old houses, its engaging street art and most of all it's world renown street food. But this event called Pearl Of The Orient Ride (POTOR) won't have us riding on the island but instead will take us over to the mainland, to an interesting scenic place called Guar Petai. Invitations were sent out and the attendance of one hundred and fourteen Brompton Riders was most encouraging.
But as usual, many went up earlier than the Saturday event so as to be able to enjoy Penang more. I flew up on a Thursday and cycled down from the airport to the city; en-route I enjoyed the scenery and also visited a unique place, a place that holds the giant footprint of Admiral Zheng He (Cheng Ho or locally called Sam Poh) at a shrine dedicated to him in Batu Maung. 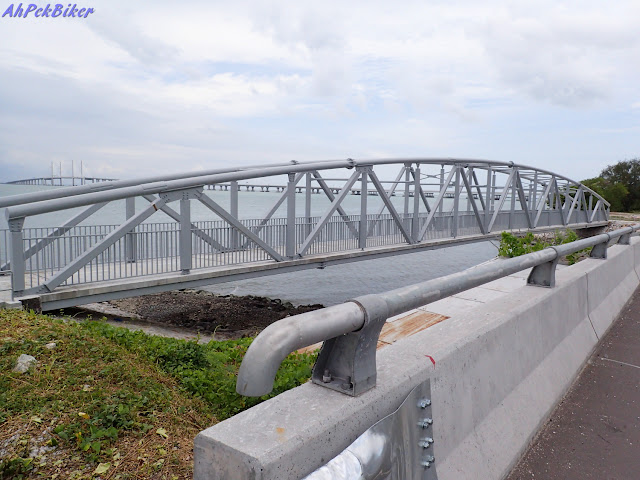 On the way down, I also took the opportunity to check out Phase 2 of Penang Island East Coast Cycling Lanes. I am happy to report that construction has reached to a cyclists bridge adjacent to the 2nd Penang Bridge approach fly-overs ramps. 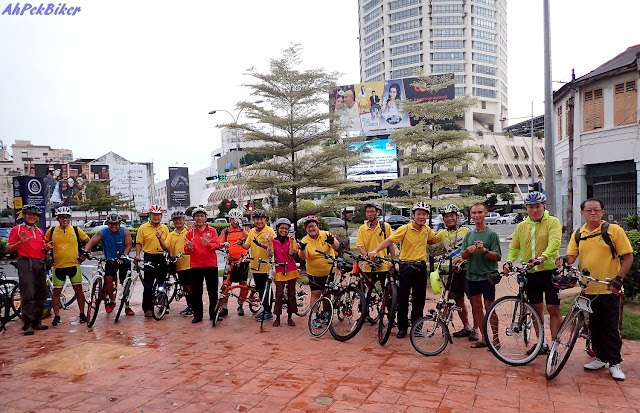 The following day (Friday), I tried to join the Bike To Work On Friday group to ride with them from Tanjung Tokong down to the city (in fact this was the reason I had come up earlier to the island). Unfortunately due to a drizzling rain I missed meeting with the group from Tanjung Tokong, nevertheless I rode down solo to meet them and another group that rode down from Karpal Singh Drive at the Gama Supermarket. It was great meeting with them and also with Dr. Lim Seh Guan, a key person in G-Club (an active cyclists club that organized these rides and also the CFAL round island events). A few of us then adjourned for a good breakfast of Penang Hokkien Mee at Oh Lay Ee's shop in Presgrave Street Ghaut.
Just a note: we had organized POTOR to be held a day before G-Club's CFAL#8 (Campaign For A Lane #8) so that many from out of town could kill two birds with one stone. 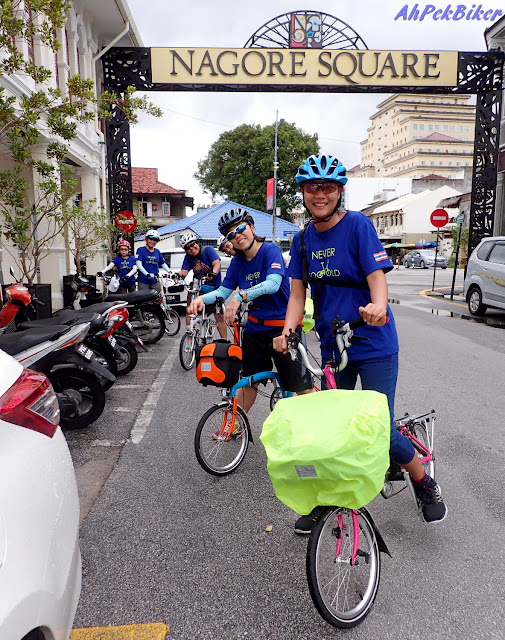 I was one of the co-organizers of the POTOR event, and after breakfast I met up with local cyclist Larry Chelvan to play host to the Thai cyclists who had come for the event. Being a son of Penang (in local Hokkien lingo: Penang Kia), I was most proud to show them the sights, culture and food of my hometown. I think we must had done a good job as they were enjoyed themselves lots and was most impressed with George Town. And I was most impressed with the Thai girls, they were soft-spoken and showed so much enthusiasm! 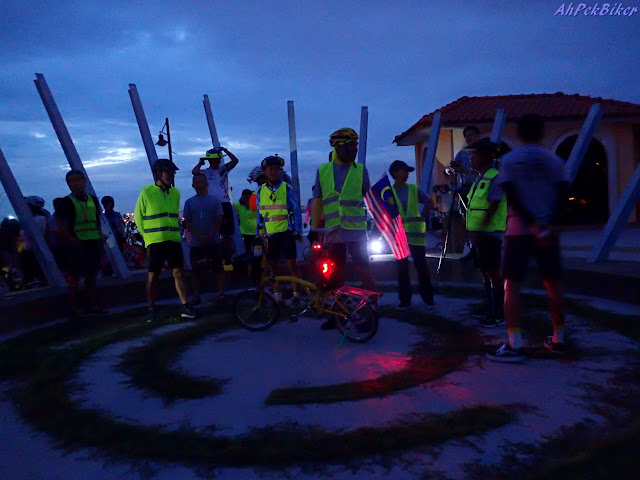 6:45am - In dawn's breaking light all of us gathered at the start point - the Tanjung City Marina - for a quick briefing by ride leader Larry Chelvan and the ride marshals. There was also a quick photo shoot session with a great group photo by fellow Brommie Kelvin Khor (see top most photo). A total of one hundred and fourteen participants came from the Philippines, Singapore, Thailand, Sarawak, Kedah, Penang, Perak, Selangor & Kuala Lumpur.


And here are some photos of participants from our neighbouring countries: 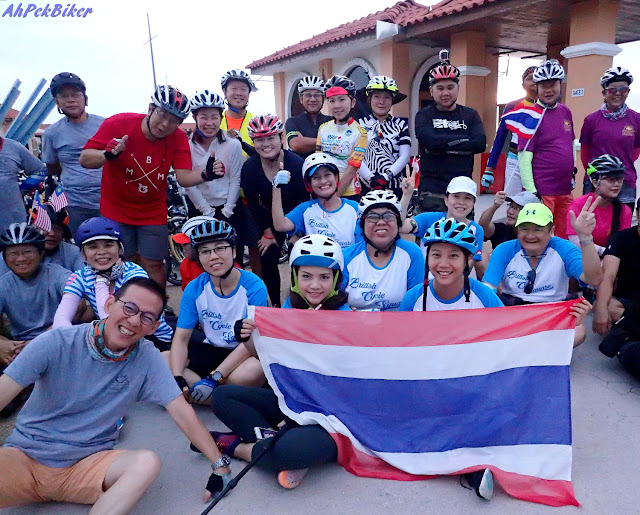 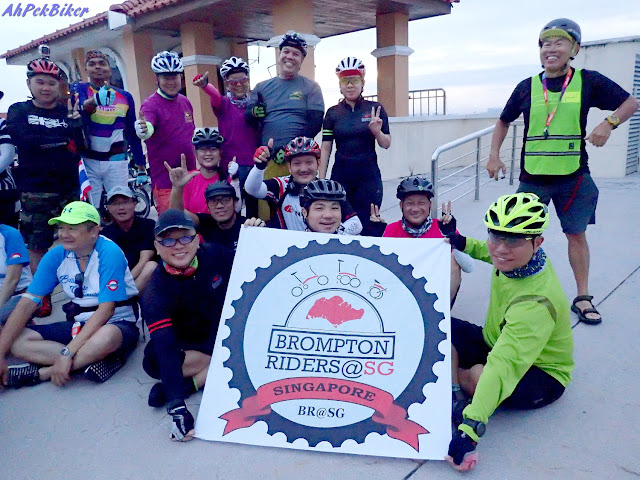 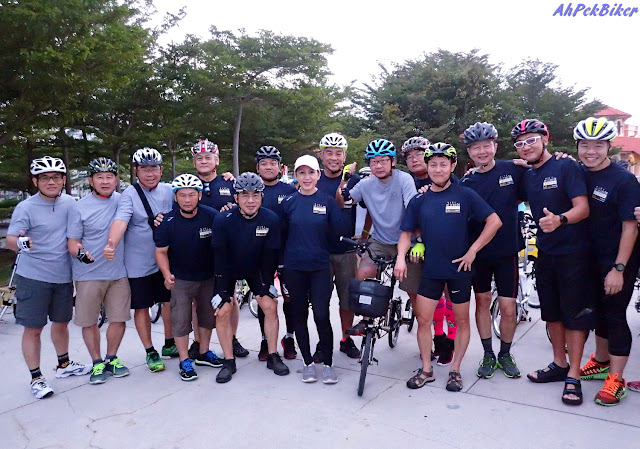 Team Sarawak... okay they are not from another country but they did make a great effort flying in from East Malaysia. 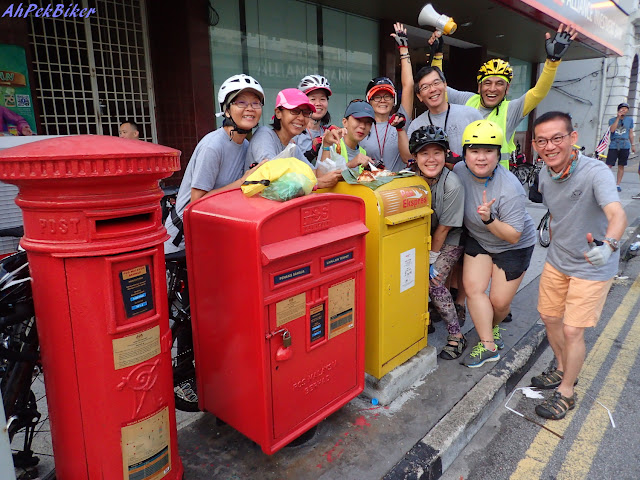 Firstly to feed our fellow riders, it was over to the Sri Weld Food Court for it's famous nasi lemak.... and some of us took-away to eat at these cute post boxes. 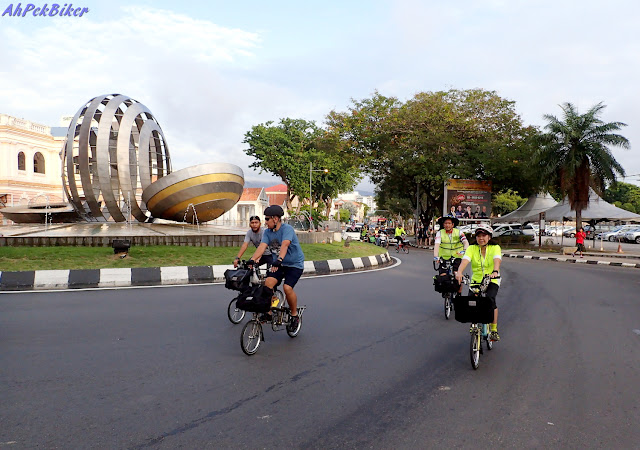 Then it was a quick round at Pengkalan Weld with a loop at the Queen Victoria Memorial Clock Tower... 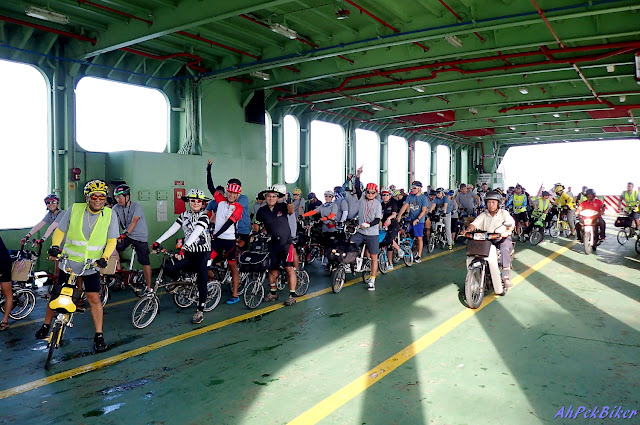 ... and into the Penang Ferry. For many this short 3 km. ferry was one of the highlights of the event as most had not gone onto the ferry riding their bikes. The port authority was most cooperative in making space to accommodate all of us into one ferry; for them it was a record of sorts (as put by one officer), one of having so many cyclists at one time into their ferry.

As we approached the Butterworth Ferry Terminal a shout went out, "Hold on to your bikes and stand firm!" and the ferry berthed with a couple of jarring lurches. Spiritedly we rode out from the ferry, eager to start our ride in Butterworth (another first for many). 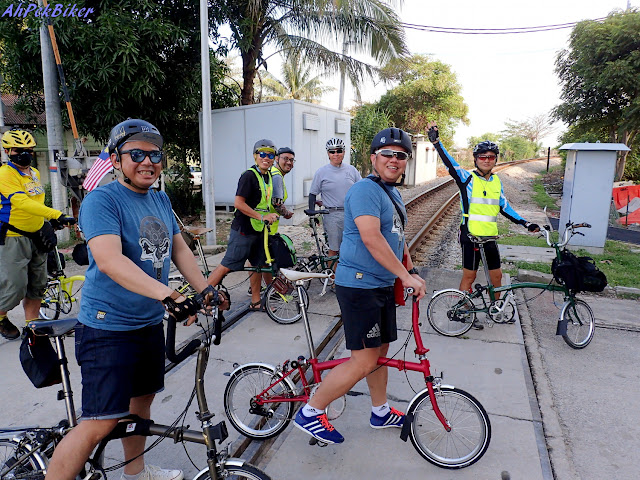 But first, a short cut that took us across some railway tracks; this was a easier way of getting out from the terminal, the normal way would have required us to ride up and down a couple of circular ramps (... see Penang Cross Channel Ride blog to see this sprial ramps). 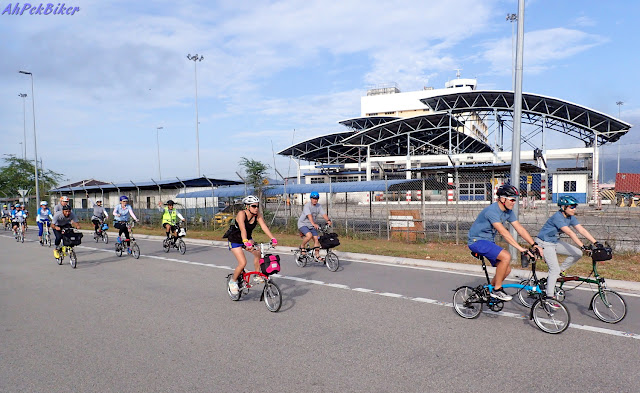 We were fortunate, after a couple of days rain earlier, today the sun was shining brightly; and here we are riding under a beautiful blue sky along the BORR. 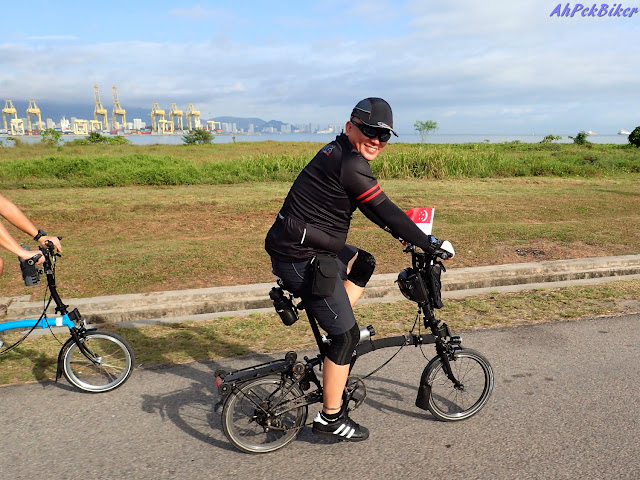 Here's William, group leader of the BR@SG happily riding the BORR. The road here is fairly flat and most important of all it runs mostly next to the sea, affording us great views like this one of the yellow giant cranes of Penang Port. 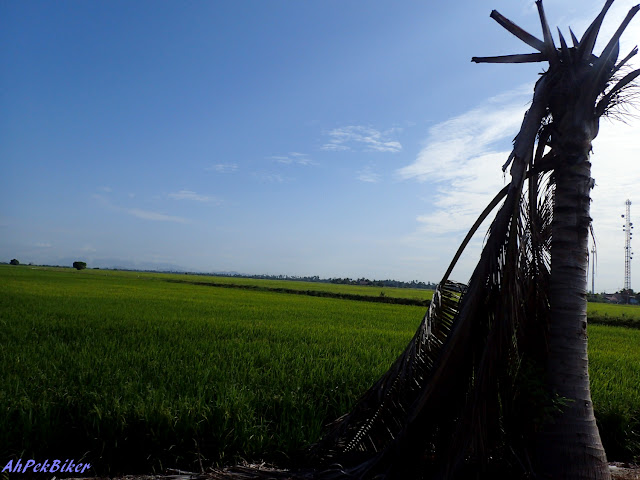 At Sungai Dua, we turned away from the highway and onto rural roads, roads that took us pass acres and acres of beautiful green paddy fields... 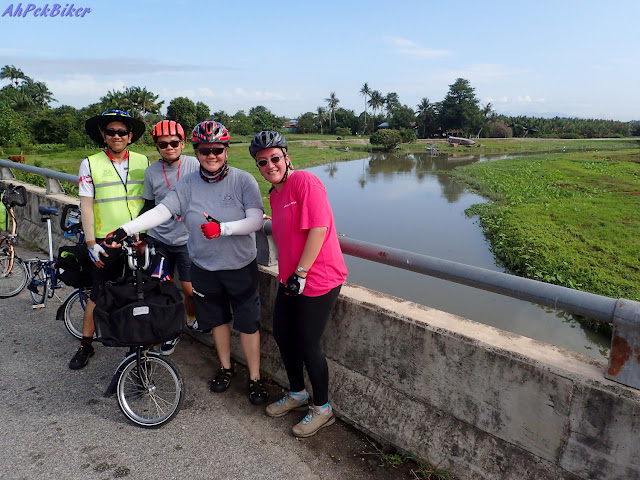 ... and across scenic small rivers with a nice rustic setting. 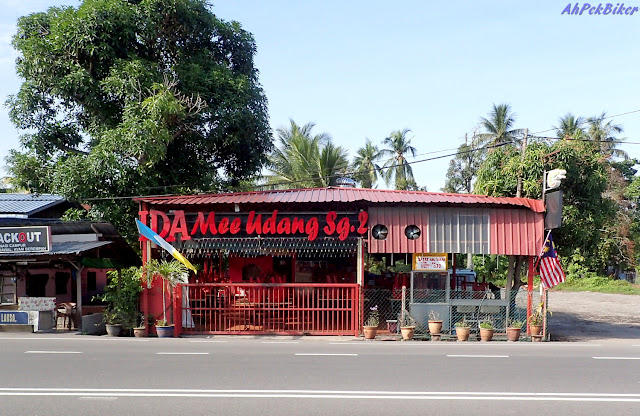 Just for note, although we did not stop to try these, Sungai Dua is famous for its Mee Udang. Okay, a mental note to go eat these delicious prawn noodles when there again. 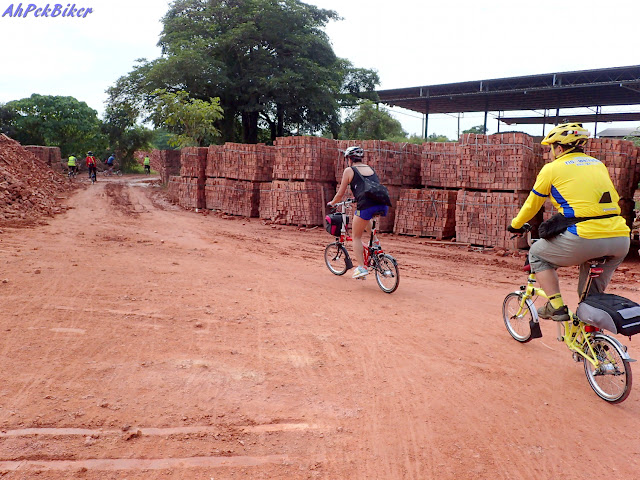 10:10am - Just after Kampung Lahar Yooi, opposite the Masjid Nyior Sebatang we took a turn onto laterite roads riding pass a brick factory. The previous day's rain had soften the laterite, making them somewhat muddy but most were to excited to really be bothered as we are almost there. 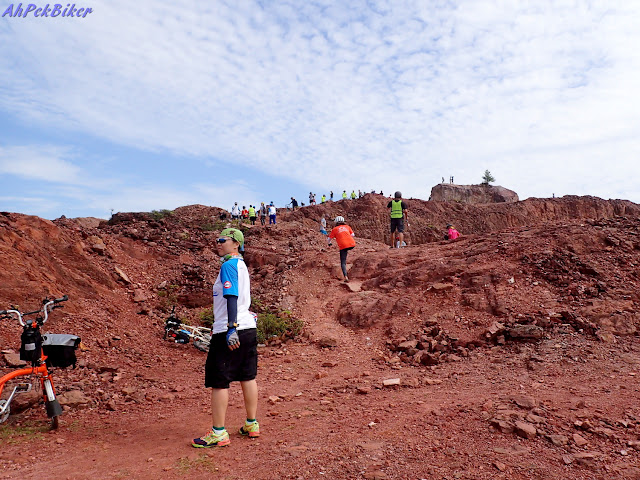 Guar Petai is an abandoned quarry. The excavation had exposed laterite hills; as we climbed these, the reddish scene was unreal, something out of this world. If the sky was red, we would have been on a Martian landscape!

The best view are from the highest hill. Below are pools of clear emerald blue water dotting a green plain almost devoid of trees (the quarry excavation had cleared the trees). It's a beautiful scene, one that's serene, quiet and nicely balanced in colour - bright blue skies, green undergrowth patches, emerald pools and reddish-brown hills.
We took many photos - of the place, selfies, and of each others in memorable poses. 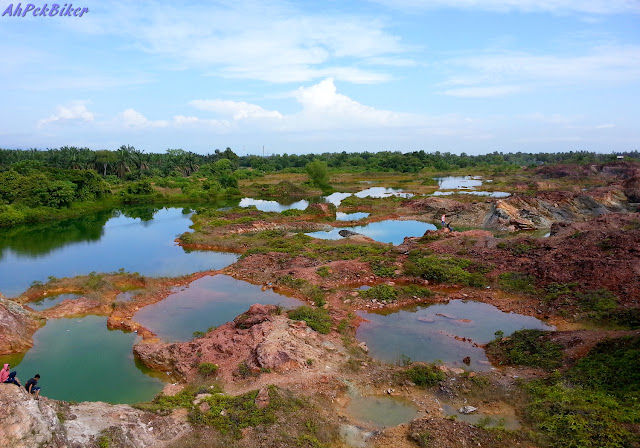 Another view of the place, it's beautiful isn't it. Most can't believe that this is in Malaysia.
A September 2015 Star newspaper article, highlighted this place but at the same time indicated the proposals to develop this haven into a tourist spot. God forbid! When the throngs come, this place will lose it's serenity and beauty! 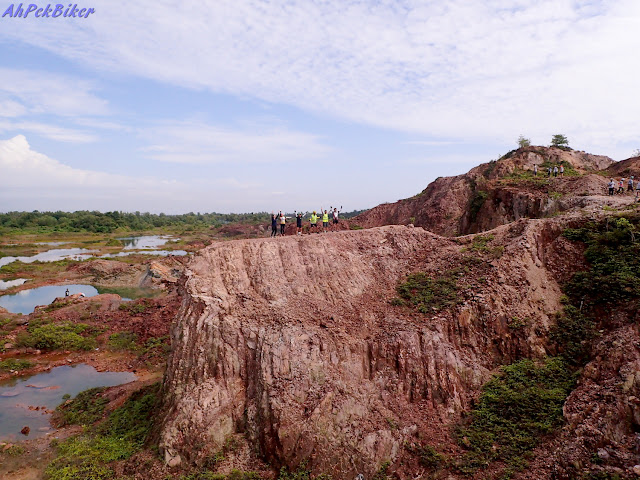 The hills just dwarf us, making us look like little ants on an anthill. Yes, it's like a slice of heaven on earth. 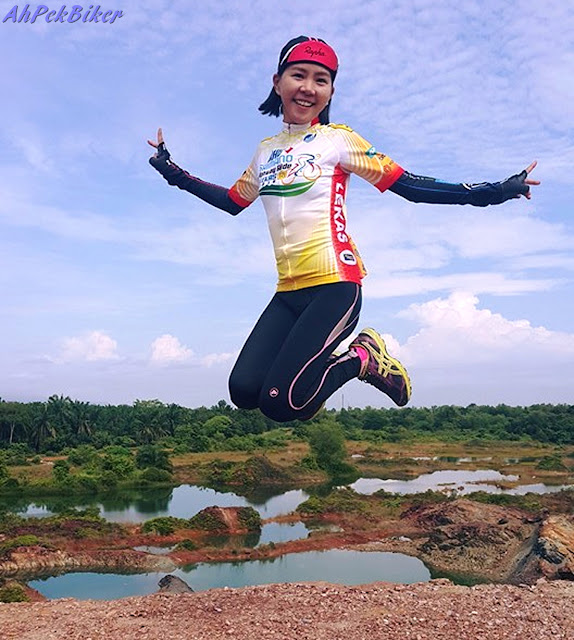 And it brought out the innocent fun in us, jumping for joy.... 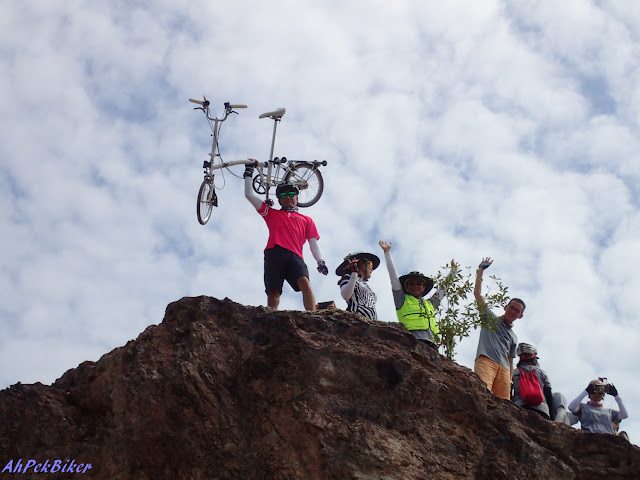 ... proudly holding up our bikes up against a blue sky peppered with puffy cotton clouds ... 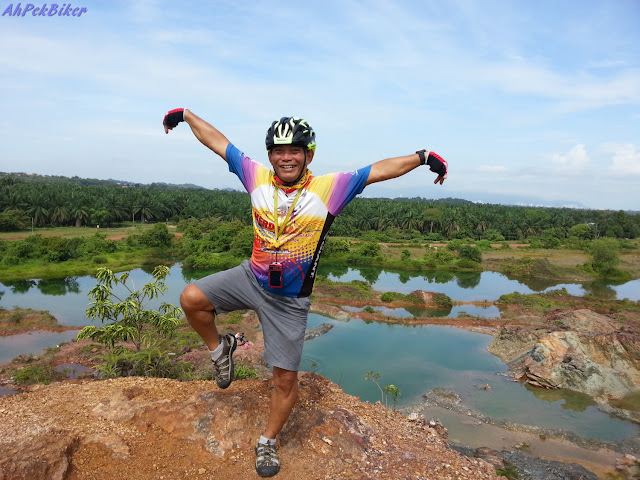 ... or coming up with comical poses! 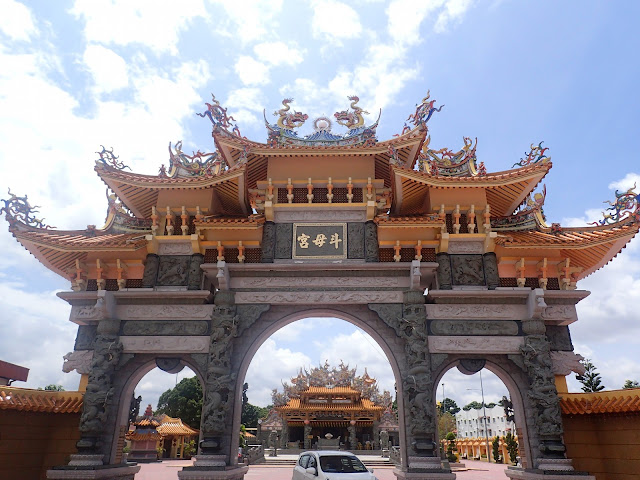 Reluctantly we pulled ourselves away from this paradise. Our return route was through the Raja Uda area which took us pass the elaborate structure of the Tow Boo Kong Temple (北海斗母宫). It's the central temple for the locals to come celebrate the Nine Emperor Gods Festival (Kew Ong Yah 九皇大帝) 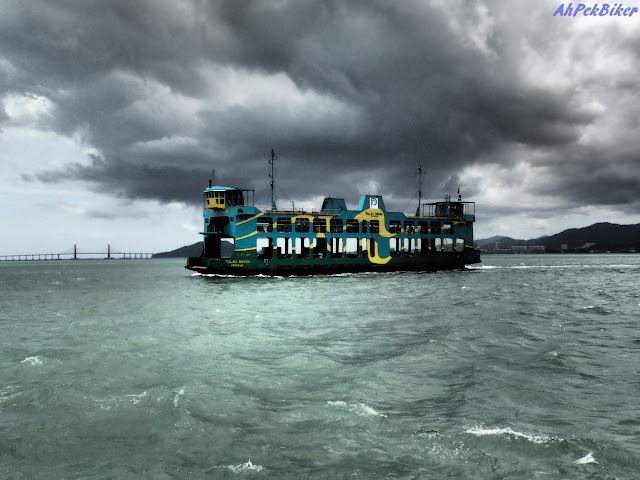 We are back on the Penang Ferry here's a shot of how one look like - this one is called the Pulau Angsa; the ferries are named after the islands of Malaysia. 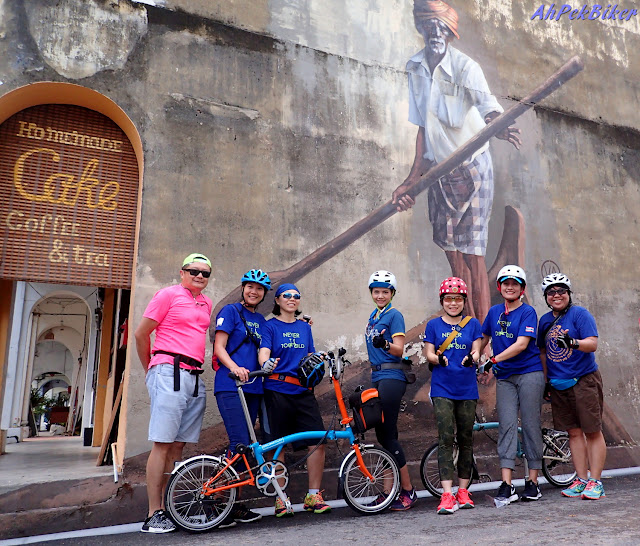 Back on Penang Island, many still had not had enough of George Town; going explore more of it's streets and wall murals... 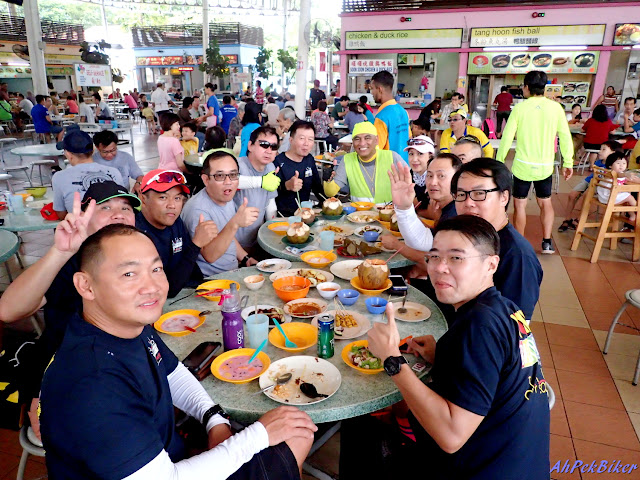 ... and of course to savour it's world renown street food. Penang is one of the top spots in the world to eat!
It had been a wonderful ride, one of comradeship cycling to a beautiful spot.
We will be back!


A nice You Tube video of our ride by my buddy Sin.


You are at - Jotaro's Blog / AhPek Biker / Cycling Malaysia / Penang / Bromping Over The Ferry To Guar Petai
If you like this, view my other blogs at Jotaro's Blog
(comments most welcomed below. if you like this pls share via facebook or twitter)
Posted by Jotaro Zen at 6:52 AM No comments: