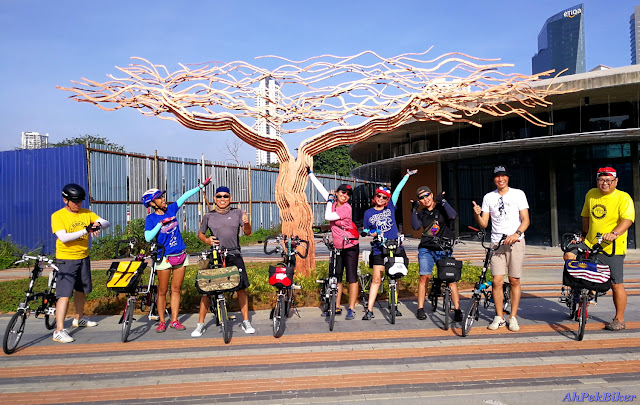 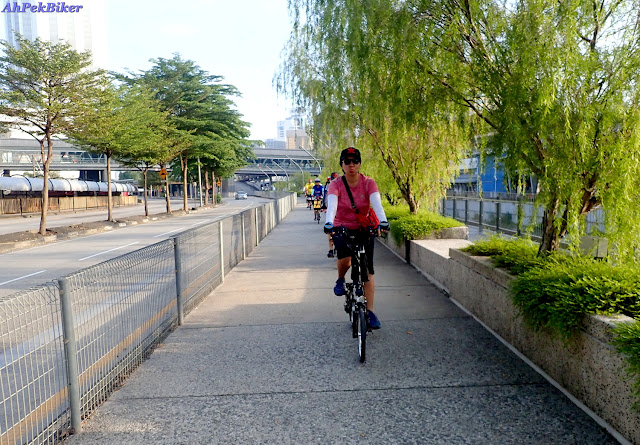 We rolled off from our usual meet up point at Dataran Merdeka, made a quick loop around Chinatown and were soon riding on the dedicated Kuala Lumpur South West Cycling Lanes which starts adjacent to the KL110 Pasar Seni bus station. This section of the lanes were closed for construction for quite a while and were we glad that they are opened again, as this is a beautiful start of the lanes, along wide pebbled-washed paths running below willow trees next to the Klang River. 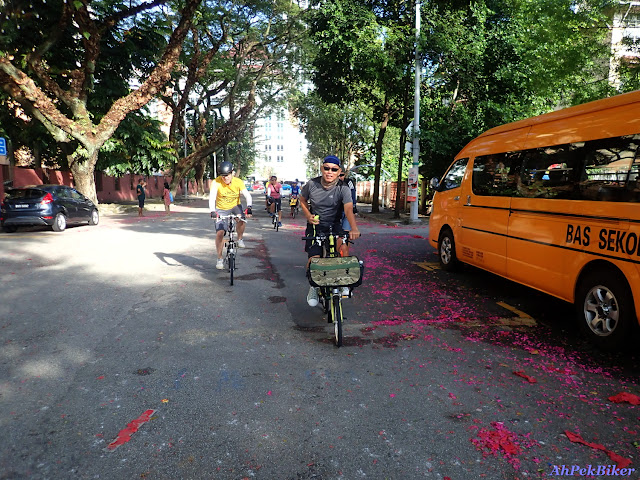 Just after the Tun Sambanthan Monorail Station (GPS: 3.13132, 101.69085), we swung inward into the Brickfields area (for the moment the cycling lanes are disjointed due to construction work at this stretch). It was just a day after Deepavali celebrations and pinkish left-over of firecrackers lined many of the roads. 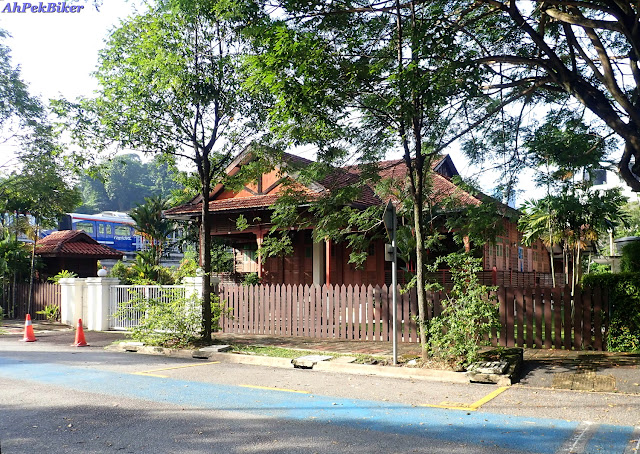 We followed the Blue Cycling lanes and reached this house which is presently occupied by the MCEF (Malaysian Community And Education Foundation) which provides partial loans to needy students taking courses in Bachelor degrees. This house was once the home of one of the richest man in Malaysia - Ananda Krishnan, who himself is a philantrophist.
We looked out for an narrow opening at the left corner of this house, that's where the cycling lanes will continue on. 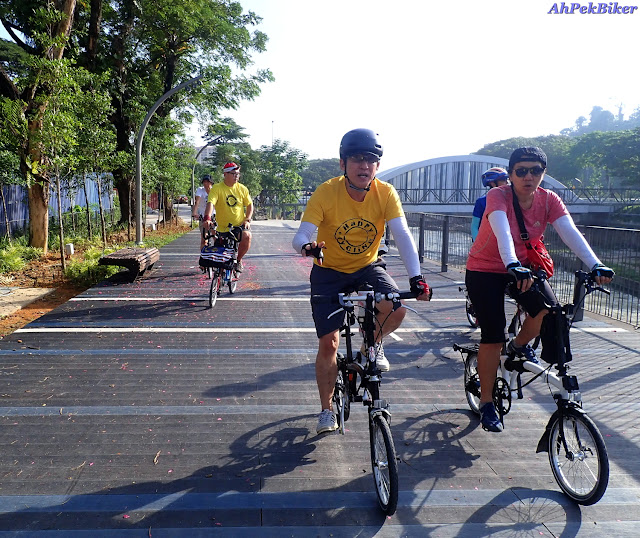 That narrow opening opened up to wide cycling lanes on board-walks, and we are back riding parallel to the Klang River for a short stretch. Further along we stopped by for photos at the orange stylized tree sculpture (see top-most photo). 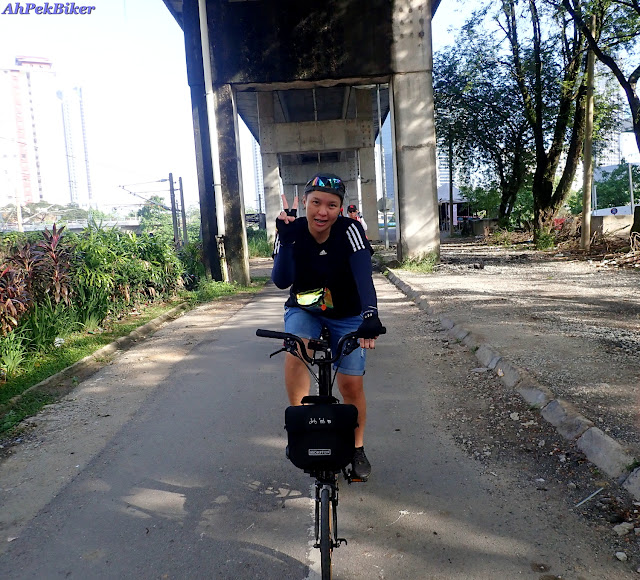 Just after the Sri Aathipuriswarar Temple, the wide dedicated lanes ended and we were on lanes running below the elevated railway tracks; these are lanes shared with motor-cycles. And the railway tracks above made this a shady stretch!
Not far ahead was the Midvalley Motorcycle Roundabout (GPS: 3.11615, 101.67817) where we made a left-turn to head for Old Klang Road. Just slightly ahead was another roundabout where we took another left that led to Lorong Seputeh. Going straight would exit to Old Klang Road, and taking a right would continue on the motor-cycle lane leading to Petaling Jaya and Klang.
Further along, we took another left that led us into tunnels running below Route E37, the SALAK Expressway, which is also known as the East-West Link. 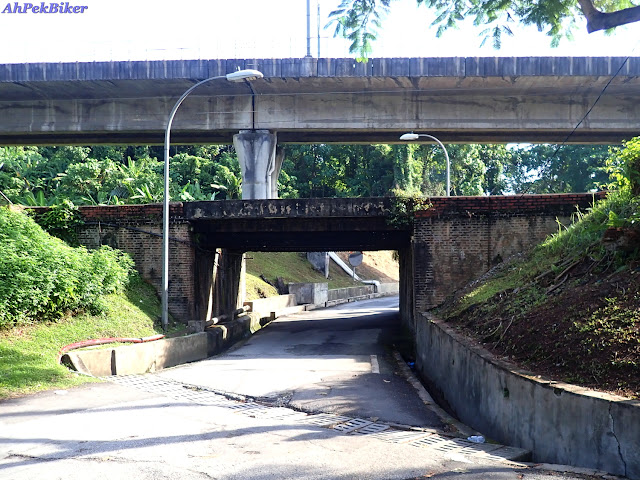 After the tunnel were overhead bridges, the lower one was for the KTM intercity and the ETS (Electric Train Service) trains that heads to Seremban and onwards to Johor Bahru. While the taller on was for the LRT (Light Rail Transit) Sri Petaling Line that serves the South & South-Eastern part of Greater Kuala Lumpur. 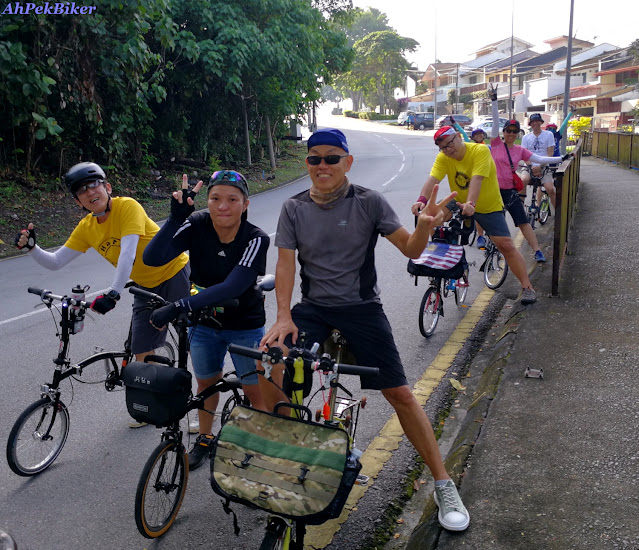 Taking a breather at Taman Seputeh, with Sin at the front waving. This was about the only stretch with some serious climbs.
I was suppose to be leading the ride, but was most glad that Sin helped out most of the way: my directional radar is not so good these days - that's a polite way of saying my sense of direction is kaput 😅. 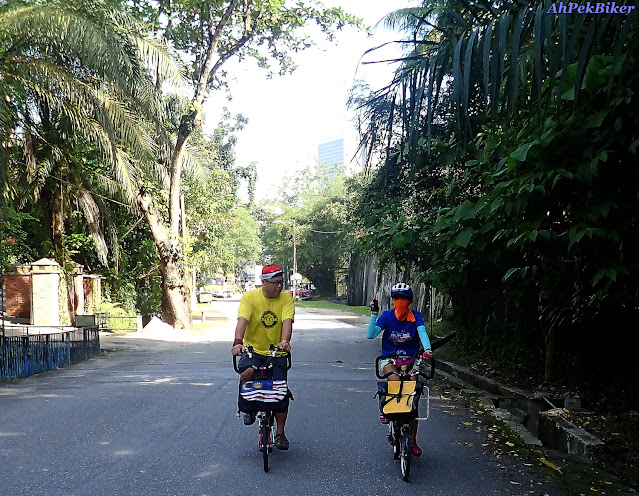 9:30 am - The weather was starting to get hot, at it was most fortunate that it's shady here at Jalan Syed Putra Kiri. Anyway, we're expecting un-shaded roads ahead, so Anne has put on a cooling face mask which Andrew (on the right) helped us buy. This mask is pretty cool.... and I mean it literally. Just wet it and wrap it round the face and it's like riding with a cool wind blowing onto the face. 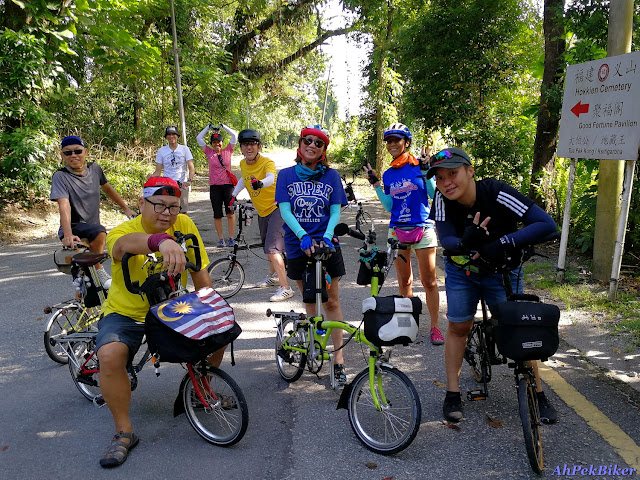 After the stretches of climb we entered Jalan Kerayong., the road that runs through a cemetery. Here we are taking another breather and enjoying a last stretch of shade, this is where we will be entering the Sungei Besi Hokkien Cemetery where it will hardly be shady. 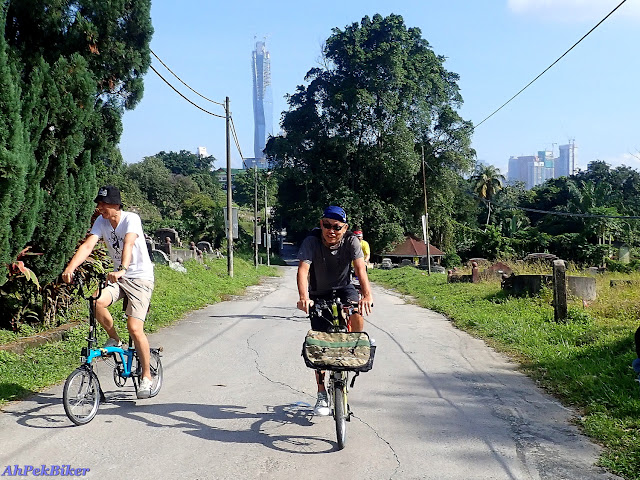 Oddly, riding through the cemetery wasn't that scary - it felt a bit odd but our hair didn't stand on ends. But just to be on the safe side, I said prayers and in them apologized to the denizens if we had disturbed them in some way or other.
This cemetery is rather large, and within it on will be able to find the graves of two renown Kapitan Cina - that of Yap Ah Loy and the other of Yap Kwan Seng. The Kapitan Kapitan Cina (English: Captain of the Chinese; Chinese: 華人甲必丹; Dutch: Kapitein der Chinezen) was a high-ranking government position in the civil administration of colonial Indonesia, Malaysia, Singapore, Borneo and in the Philippines. Office holders exercised varying degrees of power and influence: from near-sovereign political and legal jurisdiction over local Chinese communities, to ceremonial precedence for community leaders.
Here's a nice video by our buddy Sin (of the haPpY HaPpY blogs) which also captures the mood of the our overall ride and also that through the cemetery. 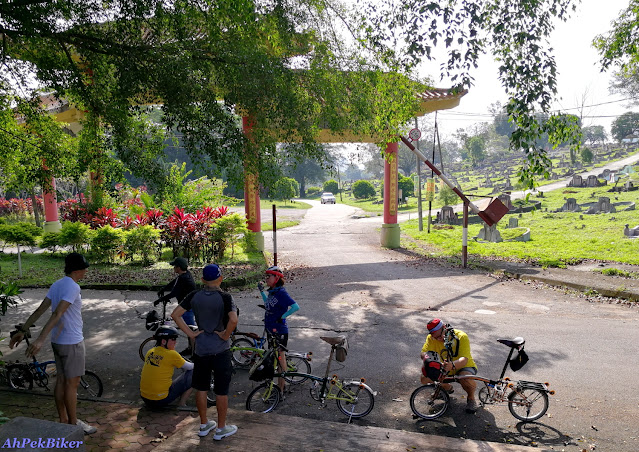 Somewhere ahead, almost at the edge of the cemetery, we made a longer stop as there are a couple of important memorials here. Un-noticed by me, Andrew had taken out his tools and tightened my handle post - many Brompton owners are unaware, but after a while the handle post may loosen causing it to have a forward-backward rocking movement (to check this, when the bike is stationary, apply the front brake and try to rock the handle forwards & backwards. It it's loose, then there is a slight rocking sound).
At a junction before this, a road leads to the Royal Malaysian Air Force Museum. 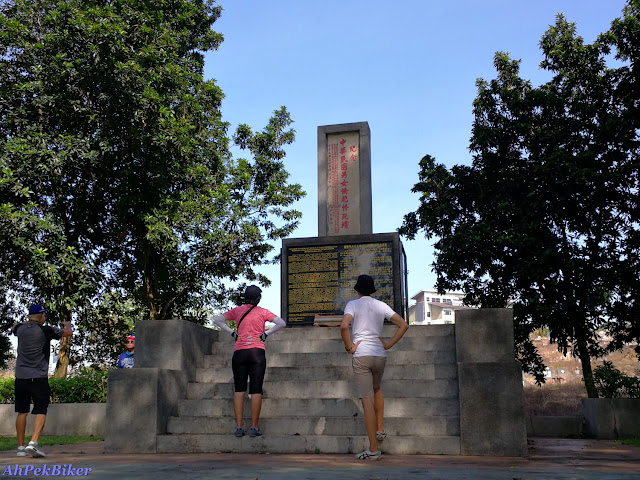 This is an important stop as over here, located next to each other, are a couple of memorials. The first one is a memorial to the victims. The first one is dedicated "In Memory of the Victims of the Japanese Occupation on the Occasion of the Relocation of Their Mass Grave". The occupation refered to was the Japanese Occupation of Malaya during World War II. "After the restoration of peace in 1945, a group of concerned individuals exhumed the remains of thousands of victims who had been massacred or buried alive in the Kuala Lumpur Hokkien Cemetery and re-buried them" and a memorial was erected in their memory. This present memorial was erected around 2009 and each year on August 15th, hundreds of representatives from various Chinese associations gather "to perform a solemn memorial service in remembrance of the innocent victims and those who had stood so gallantly against military aggression, and at the same time, to re-affirm the commitment to lasting peaceful co-existence."
"LET THIS MEMORIAL THAT IS BUILT IN STONE STAND AS AN ETERNAL SYMBOL OF PEACE." 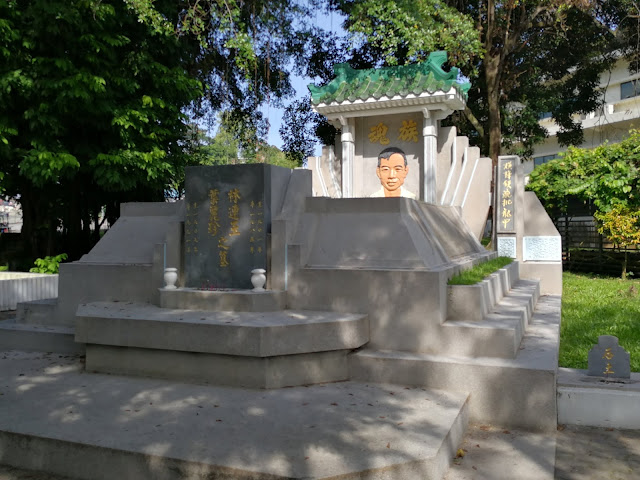 Just next to it is another memorial tomb, this one is dedicated to Lim Lian Giok, an educationist who fought to ensure that Chinese schools were not abolished. 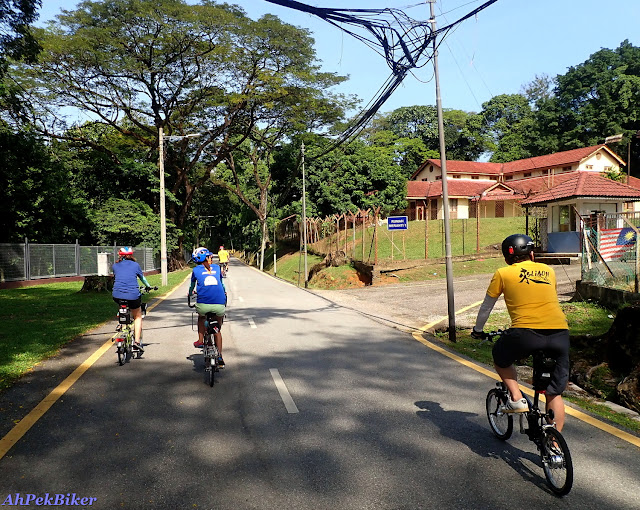 We left the cemetery and the memorials behind and exited onto Jalan Bellamy. Just one turn and we are into a contrasting neighborhood of large colonial bungalows, most of which have been converted into cultural, administrative buildings and even a couple of embassies.
Just for note, and for those who really want a kick - near the end of alan Kerayong just before it joins Jalan Bellamy there is the Bellamy Tody Shop that sells toddy from 11am. 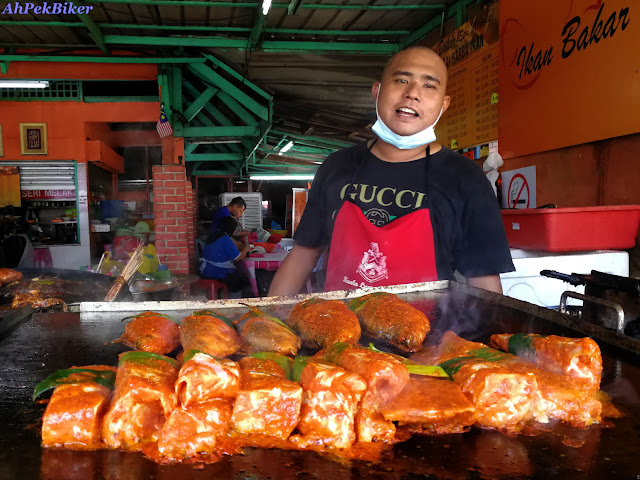 At the far end of the road, we will be going to the Bellamy Urban Orchard Park, but before going there- let's have a breather at the Jalan Bellamy Ikan Bakar. This place sells pretty good ikan bakar - too bad it was still too early for lunch ..... 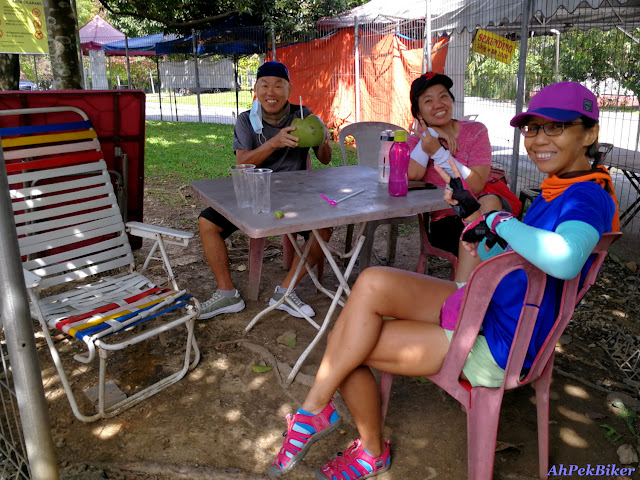 There's a nice, cozy area just opposite the ikan bakar; here my buddies seem very relaxed and at ease while drinking coconut water..... too bad the toddy shop wasn't opened yet 😂!
Apparently nearby is a stall called Ais Krim Durian D24 that sells somewhere here is a durian ice-cream made from the renown D24 durian species! 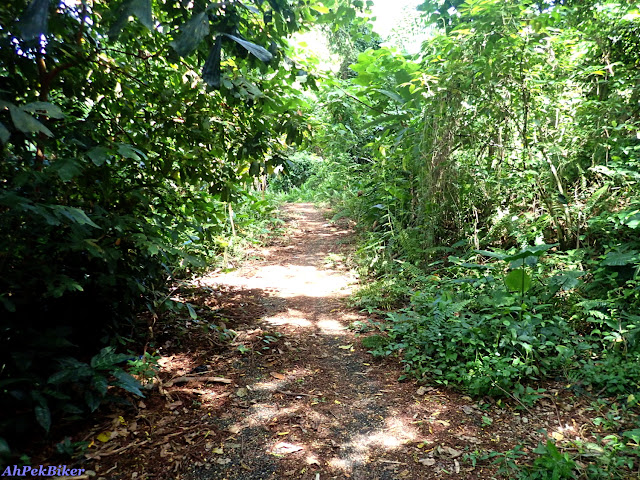 While my buddies where having a fine, relaxing time, I cycled ahead to explore a bit, somewhere here is a shortcut to back to Brickfields. I found it! The entry point is at the far end of Lorong Bellamy where a narrow but tarred path that led to a short flight of steps leading down to the Federal Highway just next to the entrance of Kuen Cheng High School. The path is a bit overgrown as it's hardly used.
From Kuen Cheng High School, a long pedestrian bridge spans across the Federal Highway and the Klang River to connect to Brickfields just before the Tun Sambanthan Monorail Station (GPS: 3.13132, 101.69085). 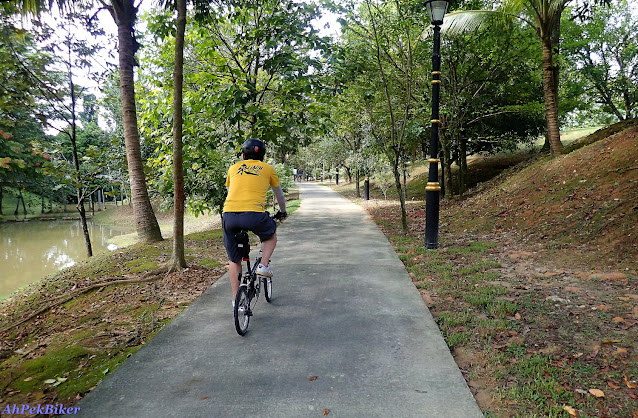 Okay! Break time's over! Time to get back onto the saddle but with a nice warm up cycling around the Bellamy Urban Orchad Park. There are nice, paved and shady paths here making our ride very pleasant and cooling even though it was approaching mid-day.
We have had rode here several times before, but it has been a while and we were glad to find the place still quiet and serene with hardly any visitors. 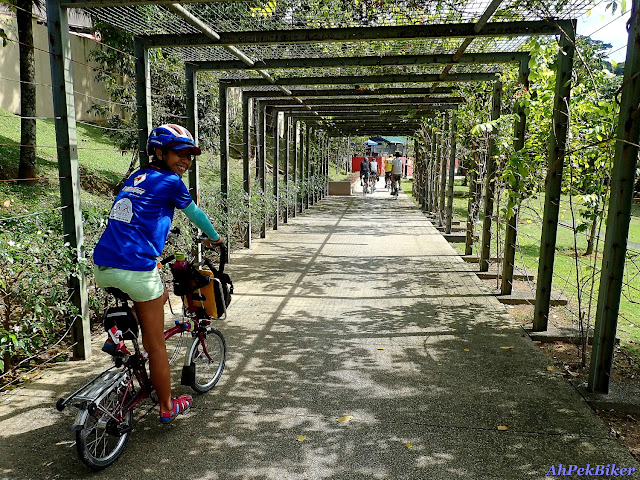 There was even a nice stretch running below pergolas with creeper vines growing up to provide a shade.
The Bellamy Urban Orchard Park is so called because it is literally a orchard planted with many species of tropical fruit trees AND it's located almost at the heart of the city, just about 15 minutes drive from Petaling Street. Not many know of this park, so it's a nice, nearby place to go and have some solitude. 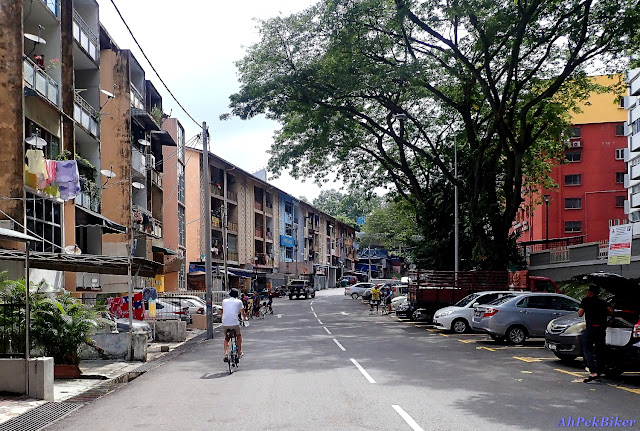 From the park, we rode pass more colonial bungalows at Bukit Petaling did a short contra-traffic crossing to Jalan Belfield to reach Jalan Choo Cheng Kay which runs parallel to Jalan Loke Yew.  The Choo Cheng Kay was a notorious area during the 80's', then mentioning that you are going to Choo Cheng Kay would elicit cheeky, knowing smirks as the Choo Cheng Kay Flats here used to be a red light district.

Using the driveway of the Public Bank Building as a shortcut, we looped through Jalan Tun HS Lee to go KL's Chinatown. For those keen on street art there are a couple of new ones, they are quite nice especially the one with the scarecrow and ghost that celebrated the recent Haloween. 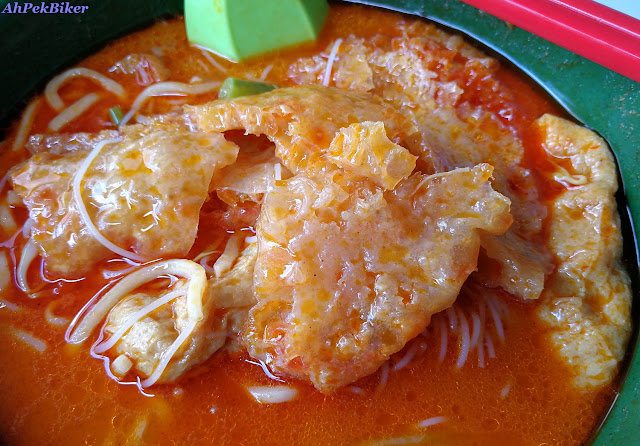 We landed at the Madras Lane Food Court for a Curry Mee lunch. I have eaten here for decades, and the pretty young ladies manning the two stalls are not that young any more but that they Curry Noodles ala Kuala Lumpur is still very good. They have been around for so long that I am tempted to say that the KL style of curry noodles (with brinjals an spongy pork rind) could have originated with them!

Playing with the floor water fountains at Medan Pasar. 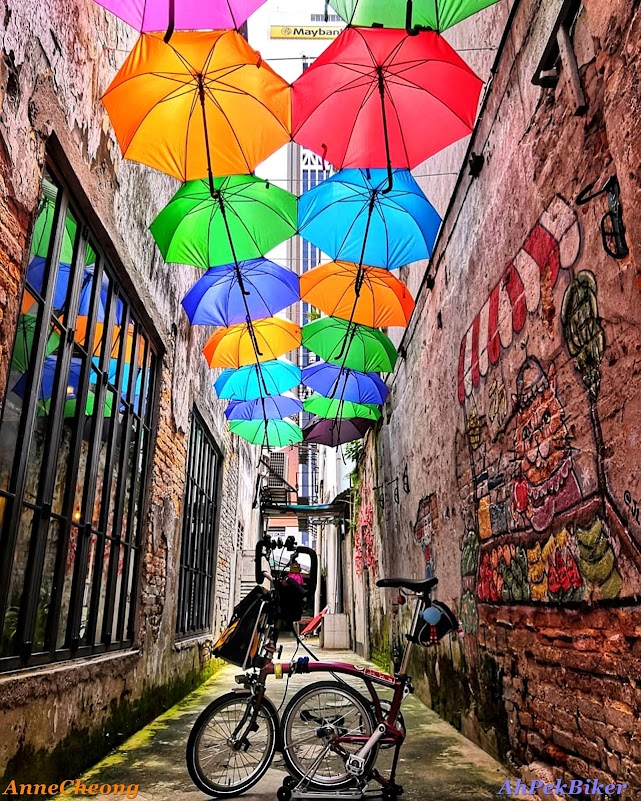 The Umbrellas Lane next to Timothy. 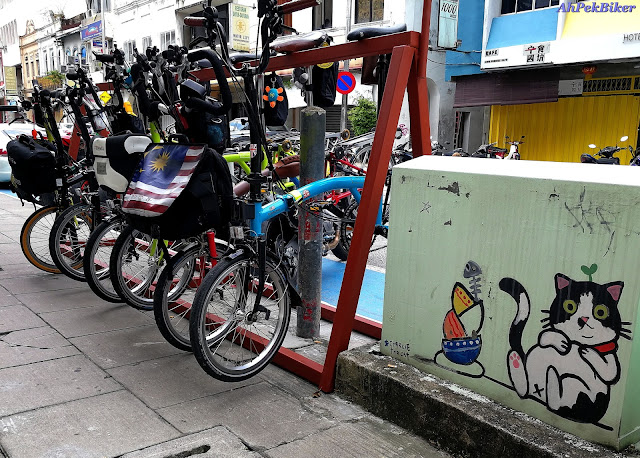 And finally a stop for coffee at Kafe Kleptokrat where our bikes too a long rest hanging from the rack provided ..... 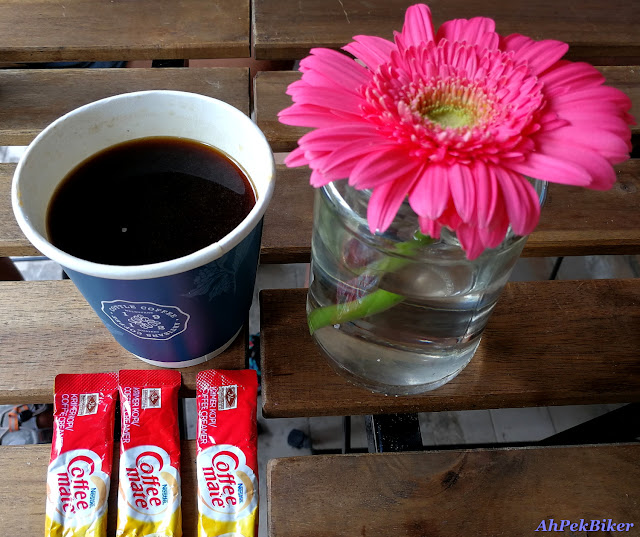 YYou are at - Jotaro's Blog / AhPek Biker / Cycling Malaysia / Kuala Lumpur / Dataran Merdeka To Seputeh -The Graveyard Shift!
If you like this, view my other blogs at Jotaro's Blog
(comments most welcomed below. if you like this pls share via facebook or twitter)
Posted by Jotaro Zen at 8:49 PM No comments: