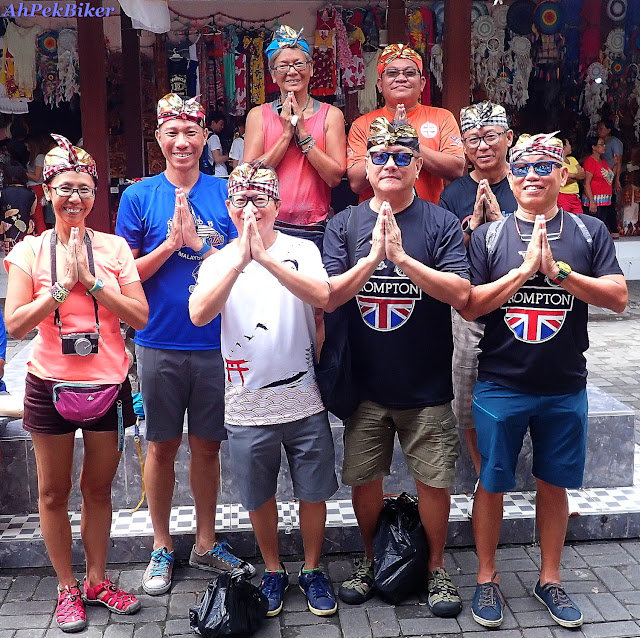 1. Traffic Directions!
Traffic in Indonesia, is right-hand drive, so cycle on the left. Same thing applies when crossing the road, take note of the direction in which traffic is approaching from!
2. Route & Traffic Conditions
This past few years, Kuta, Ubud and the surrounding regions have developed tremendously and traffic along most roads can be quite busy. Cycle with care and do take note that there are many motorcyclists around. Traffic at Karangasem is very much lighter.
There was no cycling today, we visited the art market by coach.

3. Weather
Bali during end November can get quite hot, with temperatures averaging 31°C and 25°C for day and night respectively, so do re-hydrate regularly. Do expect some rain during this time too.
Useful weather forecast sites for the Indonesia is AccuWeather. For more detailed weather, including cloud cover and wind speed, use Weatherspark and Ventusky.

7. Communicating with Each Other
When travelling in a group it's important to be able to communicate with each other, especially if one got lost from the rest. There are booths selling these just after exiting the arrival hall of Bali (Ngurah Rai) Airport. We opted for Telkomsel's at it provides the best coverage even at many of the remote areas of Nusa Penida, and got their Simpati prepaid sim cards with 10GB of data valid of 30 days at 250k rupiahs. 3G internet is available in the more populated areas but can drop to the slower GPRS or even Edge in remote areas.
Most hotels, motels, home-stays, restaurants, and airports have free Wifi; do note that these free wifi may not be secure and registration could be required. But one can safe on one's mobile data by using these especially for uploading or downloading videos. 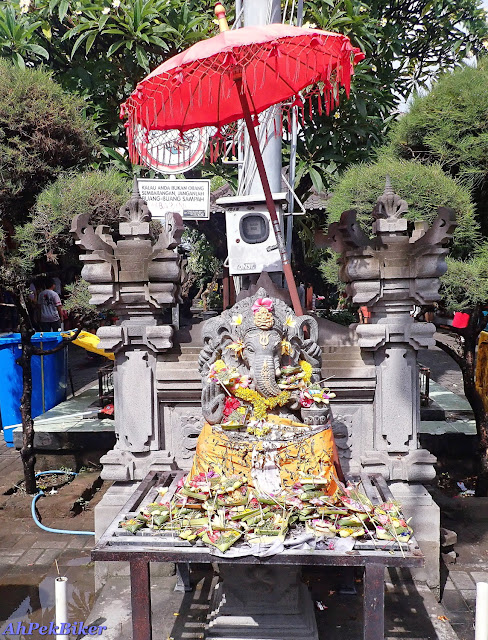 After a hearty hotel breakfast, the buses took us over to the Guwang Sukawati Art Market. It's one of the largest art markets in Bali; but before entering we notice several shrines at the entrance. This one is dedicated to Ganesh. The traders here and other locals will pray at these shrines several times a day, and at the same time make offering with canang saris. These are floral prayer offerings put into small trays woven from young palm leaves. 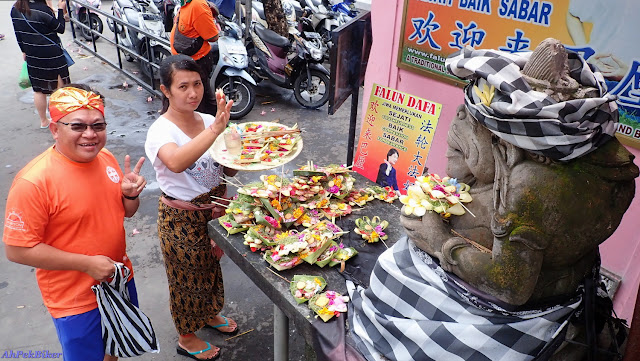 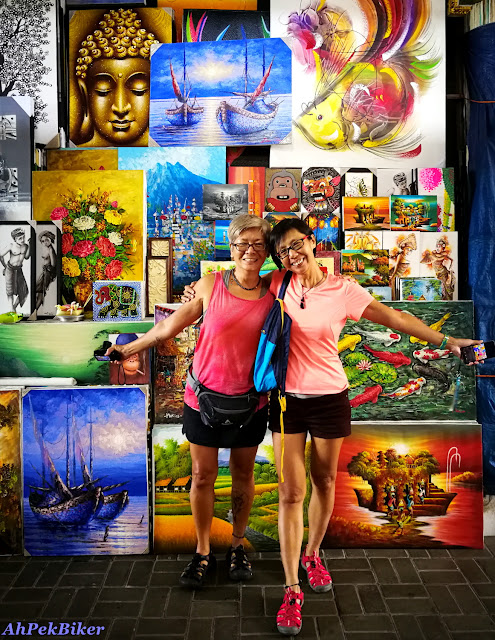 The Guwang Art Market is a different art market from the more renown Sukawati Art Market located about a kilometre away. Visitors will easily find more space here than at Sukawati. For example, ample parking space is just after a large banyan tree with a small shrine filled with daily flower offerings and burning incense. The market itself comprises three main blocks or ‘blok’ in the local tongue. ‘Blok A’ is at the left of the entrance, where kiosks mostly sell wooden carving items and other souvenirs. ‘Blok B’ is at the right, and sells textiles, such as clothes in various motifs and colourful sarongs. ‘Blok C’ resides between A and B, connecting the two blocks with some foliage adding to a more shady souvenir shopping experience. A sitting area here also provides shoppers the chance to relax. 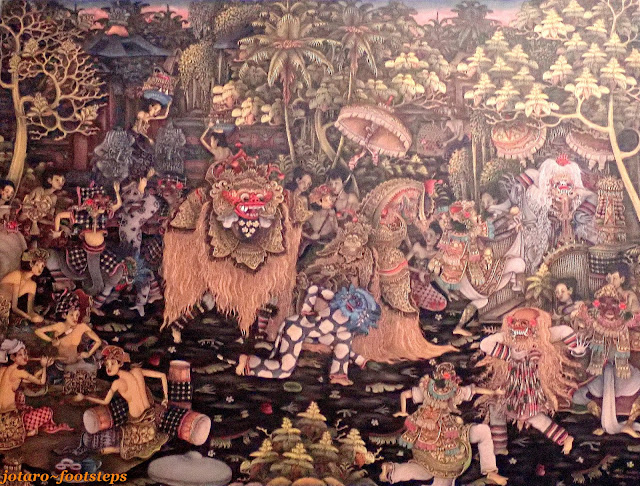 There are many traders and artists here vending art work of different Balinese art styles and on different themes. There are the traditional/classical Kamasan (Wayan), Klungkung, Batuan & Ubud styles, and lately a surge of newer styles, more colourful psychedelic ones. Many of the artwork are of the lovely Balinese culture & ceremonies, markets, fishing boats, farm and country scenery; and there are those of Hindu deities, animals and beautiful flowers. And these comes in paintings, carvings, sculptures, handicraft souvenirs, colourful Balinese fabrics, clothing, and fashion accessories etc.
The above is a Kamasan style painting of a Balinese festival complete a Balinese mythological dance illustrating the good Barong fighting the evil demon queen Rangda. The dance to represent the eternal battle between good and evil.

We went around appreciating the artwork. There were also newer styles paintings like the above showing Balinese dressed in traditional costume attending a religious festival. 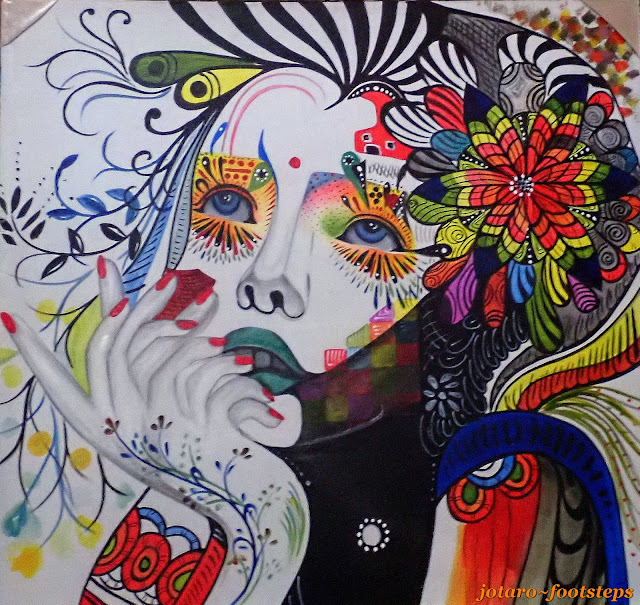 The there were the modern ones like this painting of flowery girl in a colourful psychedlic style. 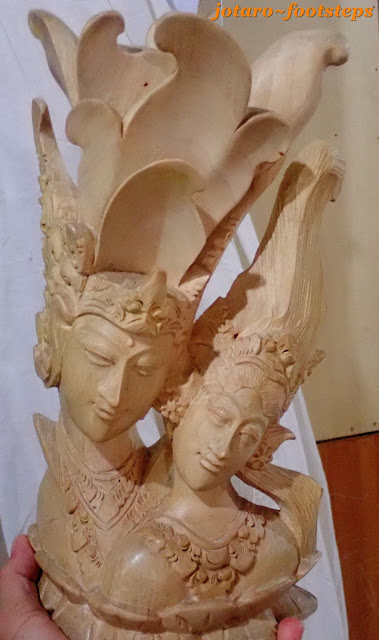 Wood carvings abounded too, this one was a bust of a Balinese dance couple. 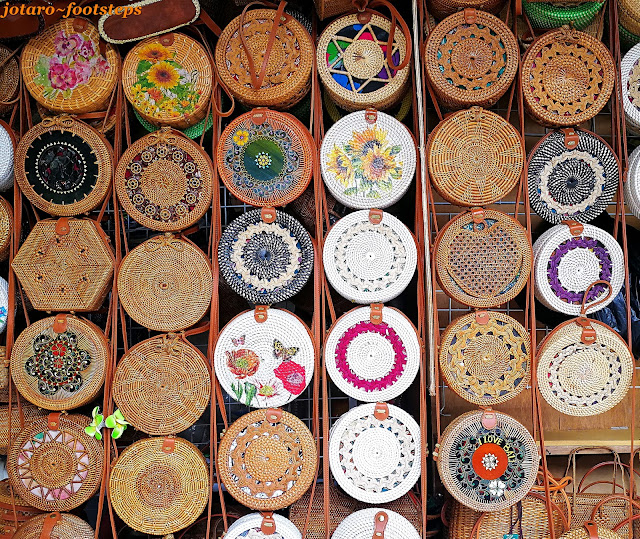 For the souvenir hunters, there were rattan handbags. 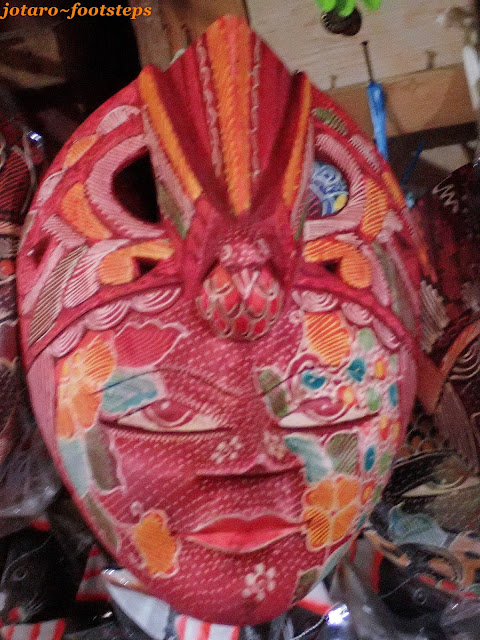 Various Balinese masks; this one in batik motifs. 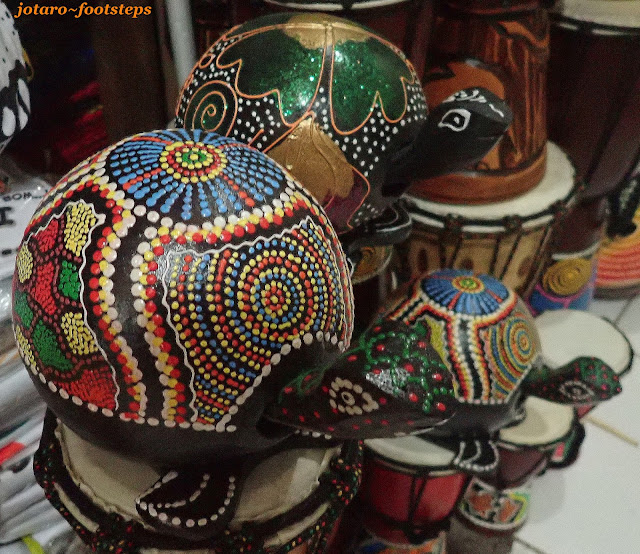 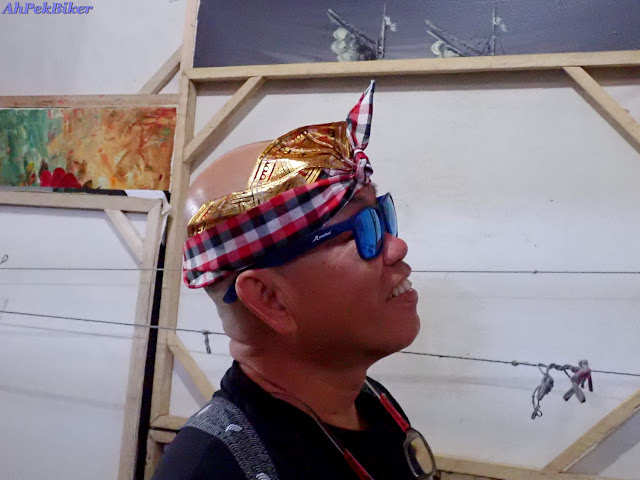 Some of us bought paintings and carvings, many of the girls bought the rattan handbags. And almost all of us bought the traditional Udeng headgear. Here's my buddy Sin (of the hApPy HaPpY blogs) displaying the Udeng he bought.
(..... see more of Sukawati artwork) 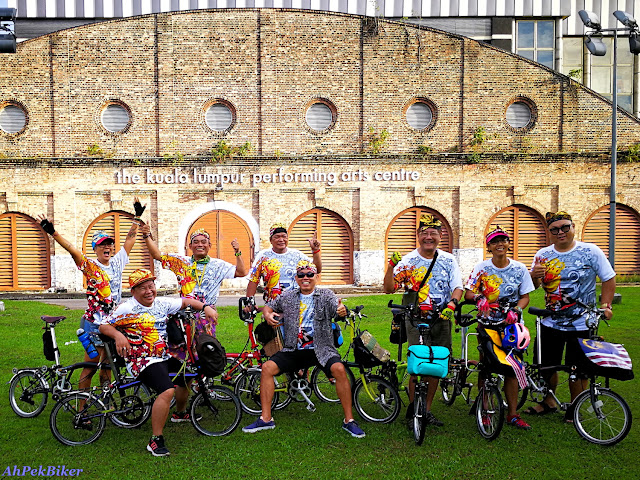 The reason we got the udengs were to wear for our Brompton Malaysia Batik Run Event held a few weeks later. Here's a photo of us proudly wearing our udengs and the BOB event T-shirt during the event held in Kuala Lumpur. 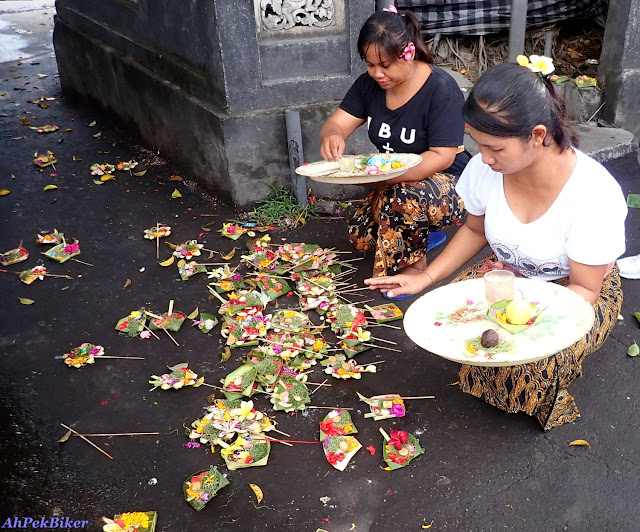 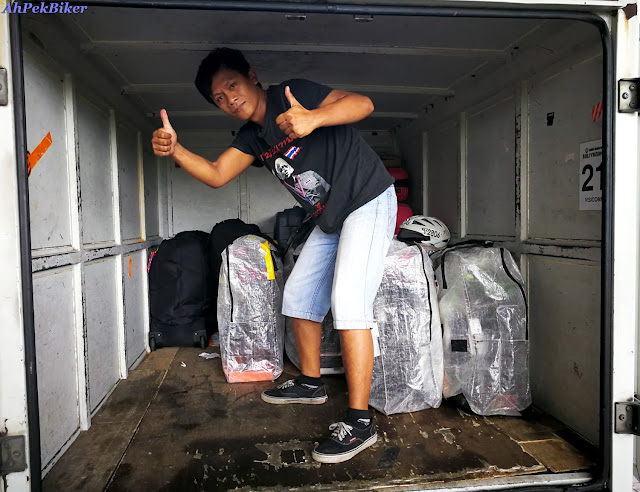 12:00 noon - We are back at our hotel, our packed Bromptons were put into a waiting truck. And we boarded buses that would take us to the airport or to our respective hotels in Kuta.
And..... 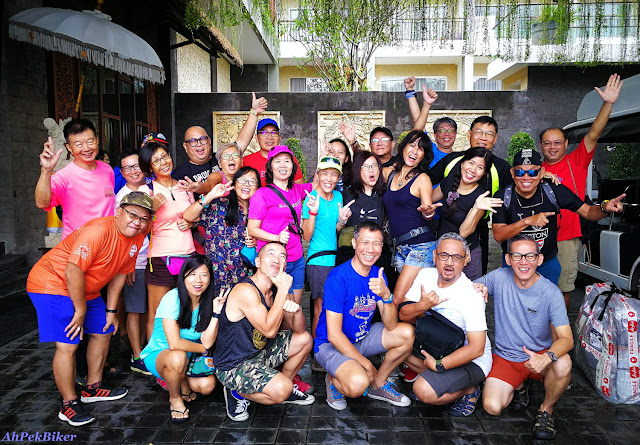 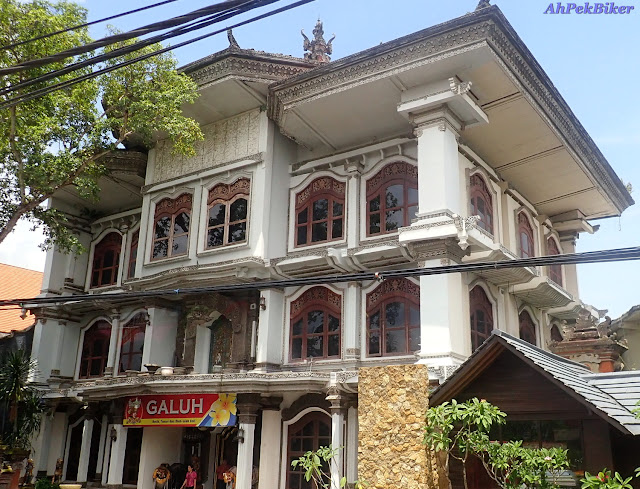 Enroute we passed by several building that had a mixed of local and colonial architecture; these buildings give a link to Indonesia's Dutch colonial past. 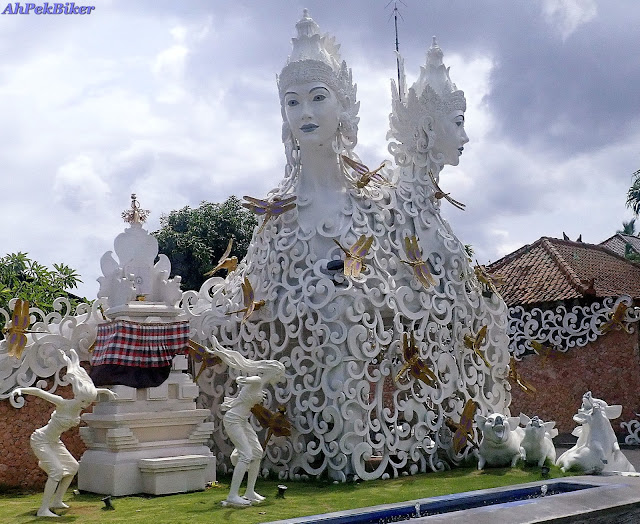 And somehow my eyes were drawn to the beautiful sculptures along the way; they were so many of them dotted all over the island. 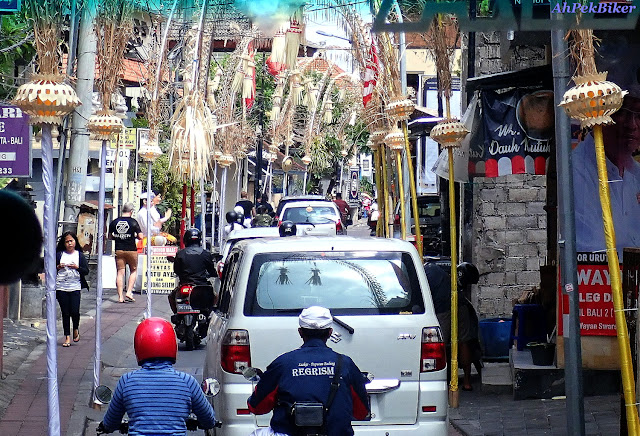 Back at Kuta, the streets leading to our hotel were lined with penjor decorations, their leaves dropping over the road. Penjors are tall tapered poles made from bamboo and placed outside Balinese Hindu homes during certain religious holidays. Due to their length, often up to 10m, the poles droop or hang over the road, creating a very charming effect. Roughly halfway down the pole a structure also made from bamboo is attached, this is called sanggah cucuk. This may be triangular in shape or it may be a simple "cage" and is used to place offerings in. 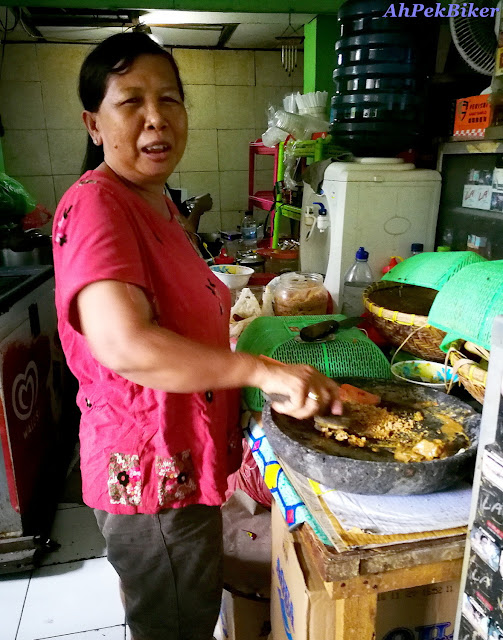 After checking into our hotels it was out to lunch; having eaten here previously we had warmed up to her and treated here like our Balinese godmother. She was busy preparing the spiced sauces for gado-gado, slowly pounding the nut with her lesung batu which consisted of a cobek mortar and ulekan pestle. On seeing us she was all smiles! 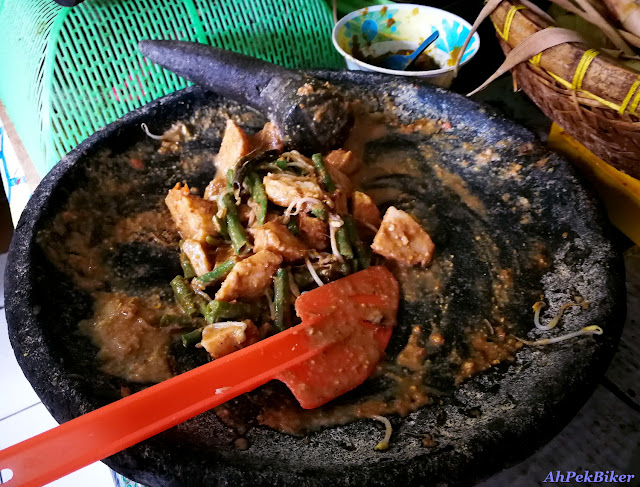 A closer look at the cobek mortar and ulekan pestle. The cobek is a type of bowl used as a base for pounding or kneading activities, while a ulekan refers to a blunt elongated object such as a club that can be held by the hand to pound or knead a material. Her cobek was a flat one made from stone, while her ulekan was made from a hard tree root. 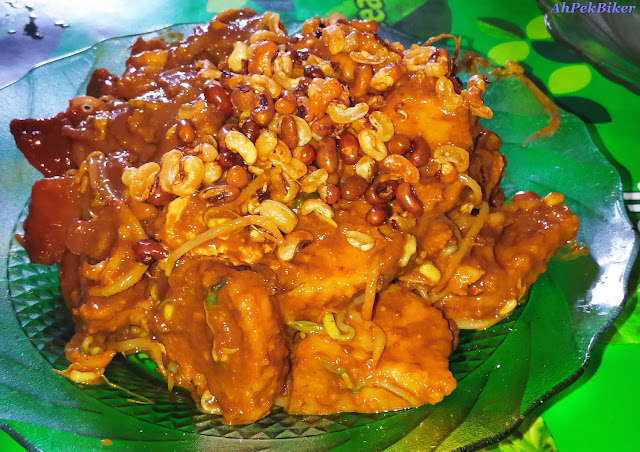 Made with love from her gado-gado was very good - tasty and nicely spiced without being too chili hot. 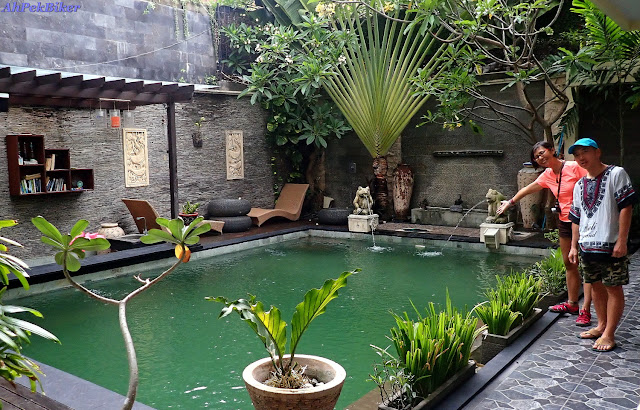 We would be staying in two hotels, it was Ah-Neh's idea. The next few days we will be going off island to Nusa Penida and would not be bringing our bicycles along. Us guys will be staying at Swandewi Homestay as they had a store to keep our bicycles; whereas at Dedy Beach Inn, where the girls stayed, there was no store but instead had a pool for a cool dip during this hot season. We guys could visit them and cool down; it was the best of both worlds. 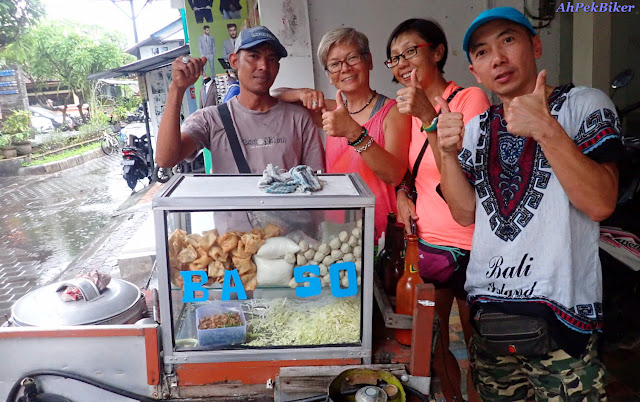 Haha... a good idea but it rained soon after and there was no need for that cool dip. Instead we went window shopping to compare prices, things here although cheaper than the upmarket hotel areas of Kuta was slightly more expensive than prices at Ubud. A push-cart stall tempted us to stop have tea time snacks of bakso.
Bakso is an Indonesian meatball, or a meat paste made from beef surimi. Its texture is similar to the Chinese beef ball, fish ball, or pork ball. The word bakso may refer to a single meatball or the complete dish of meatball soup. Mie bakso refers to bakso served with yellow noodles and rice vermicelli, while bakso kuah refers to bakso soup served without noodles. Bakso can be found all across Indonesia, from street vendors to high-class restaurants. Along with soto, satay, and siomay, bakso is one of the most popular street foods in Indonesia. Interestingly, the name bakso originated from bak-so (肉酥, Pe̍h-ōe-jī: bah-so·), the Hokkien pronunciation for "fluffy meat" or "minced meat". This suggests that bakso has Indonesian Chinese cuisine origin. 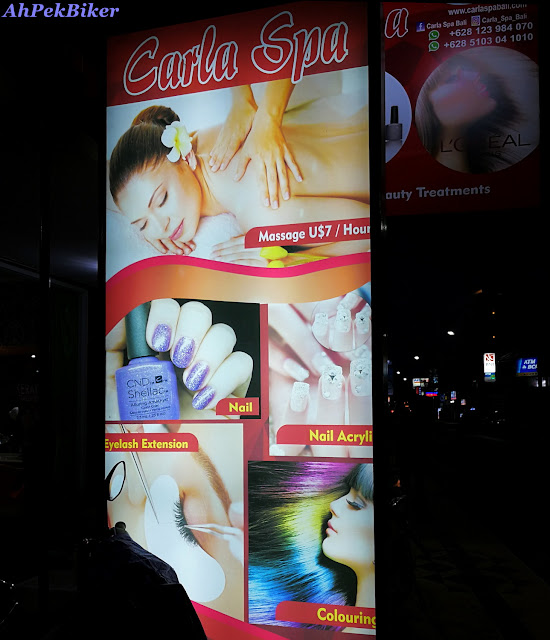 6:30pm - Okay.... it's dinner time but we will not be having dinner yet but will be going for some Balinese Massage, see it's not good to have a massage on a full stomach - those bakso will have to sustain us for the time being. But guys don't be expecting the soft hands of lady masseurs, this part of Kuta is predominantly Muslim - it's male masseurs for guys and lady masseurs for gals 😊. But I had no complains, Jaggus, my male masseur had tender hands but could give a good hard massage. He was adept too, he knew that particular spot on my head to massage so as to temporarily relieve my sinus problems.
Sorry, no photos here of the massages.... it's something private 😆. 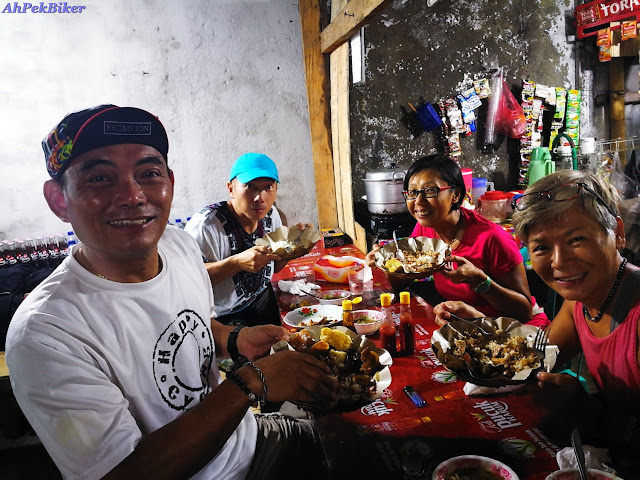 Our busy schedule at Ubud had deprived us of a chance to try the renown Babi Guling Ibu Oka.(not that we are complaining). Fortunately round the corner we found, Warung Sari a side-lane stall that sells fairly good Babi Guling, theirs may not be as good as Ibu Oka's, but being a small stall we got to have a nice, warm chat with the operator and her two daughters. 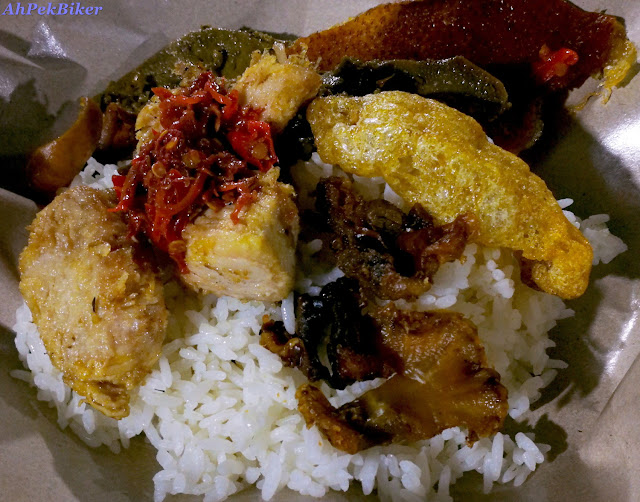 Babi Guling is a type of roast pork made from piglets stomachs are filled with herbs and vegetables such as cassava leaves and then roasted on a spit and cooked the skin becomes brownish and crunchy. Guling pigs were originally used for both traditional ceremonies and religious ceremonies, but now guling pigs is sold publicly in Bali.
Here's my plate of Sari's babi guling, we had asked for the fatter cuts as these were tastier and more tender, the skin was crisply roasted but we did add on extras of pork cracklings (those yellow spongy stuff on the right). 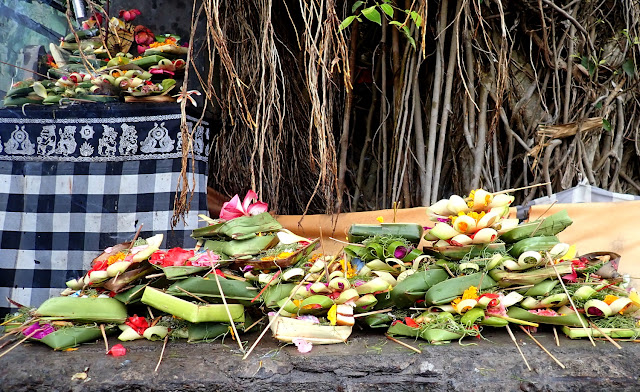 Although it was not a cycling day, we did have a good day of eating and shopping. Our prayers with the canang saris were answered.