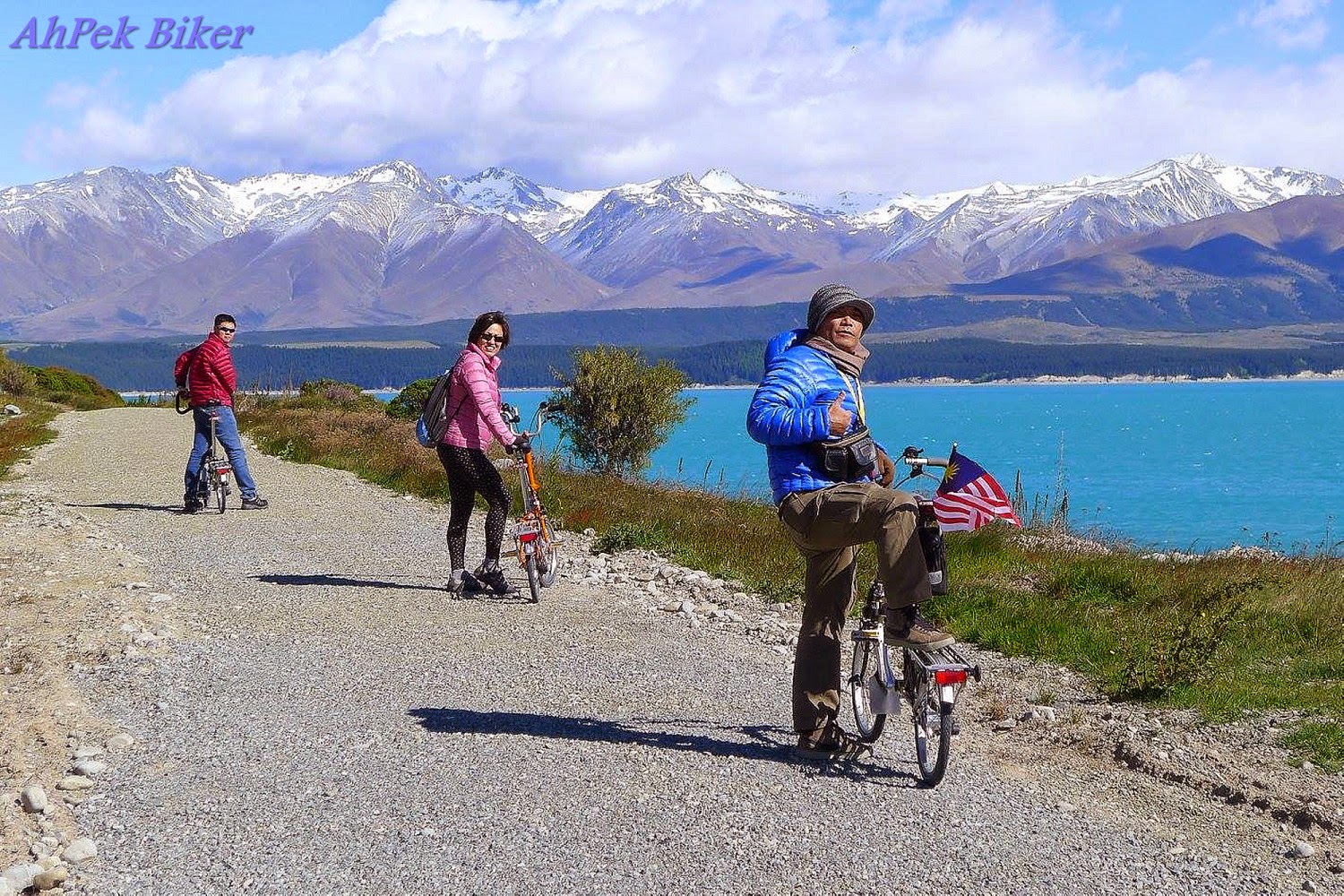 Tekapo, Wanaka & Queenstown, New Zealand : 18th November 2014
Small Group Ride - Road Trip Tekapo>Wanaka>Queenstown with detour cycling at Lake Pukaki
Today was one of the more memorable days of our trip.
We hit Lake Pukaki, for me it's one of the most beautiful spots on earth!
Later we were caught in a bit of a puzzle at Wanaka. How did that happened? We will see... 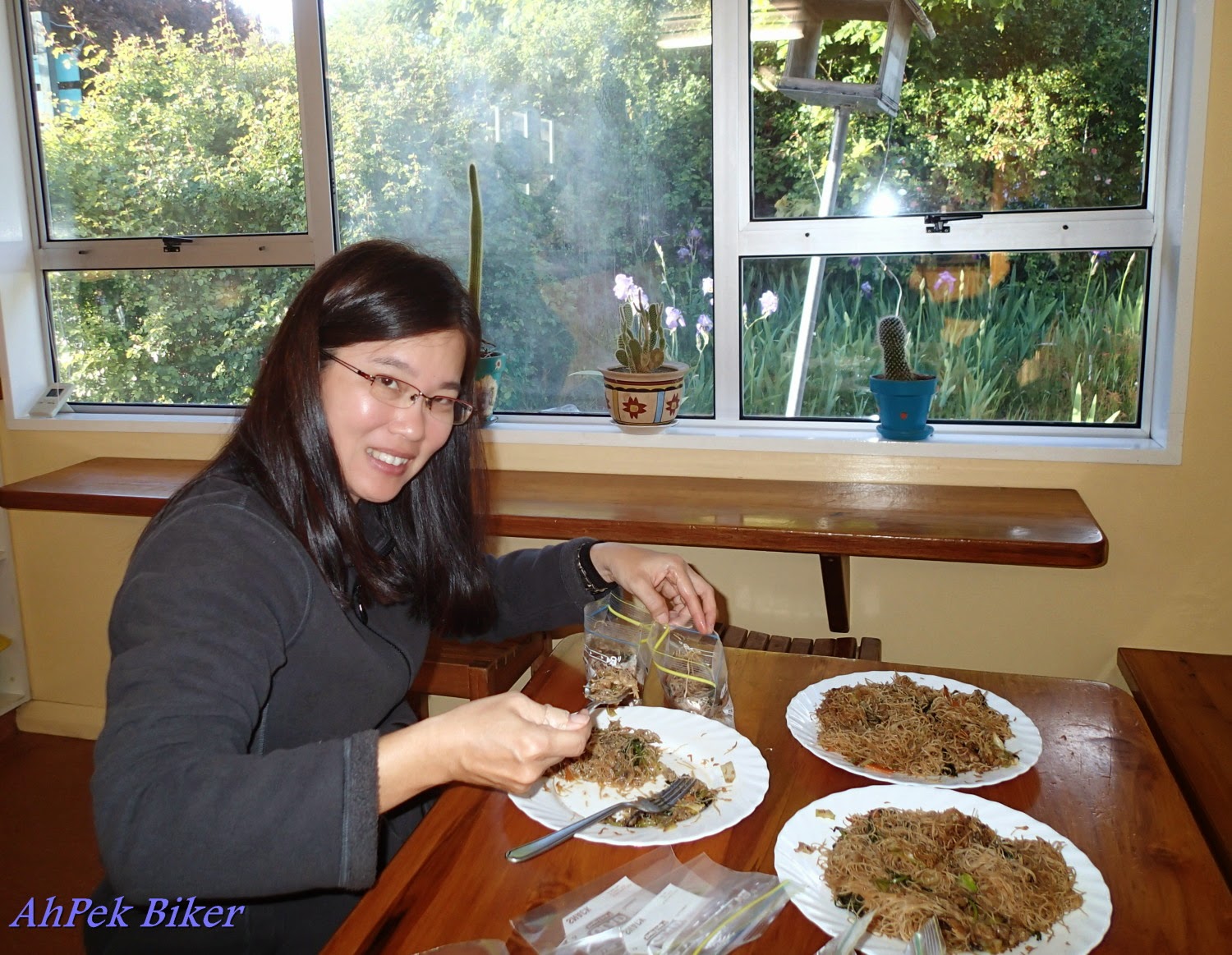 We took advantage of Tailor Made Tekapo Backpackers kitchen and fried some meehoon (vermicelli) to pack away for lunch later.
For lack of a wok, it was not easy frying this vermicelli. Even with their largest and deeper pan, we had to fry two rounds for enough food for just the four of us. When will these Westerners know the versatility of the wok? Even frying an egg is easier using the wok! 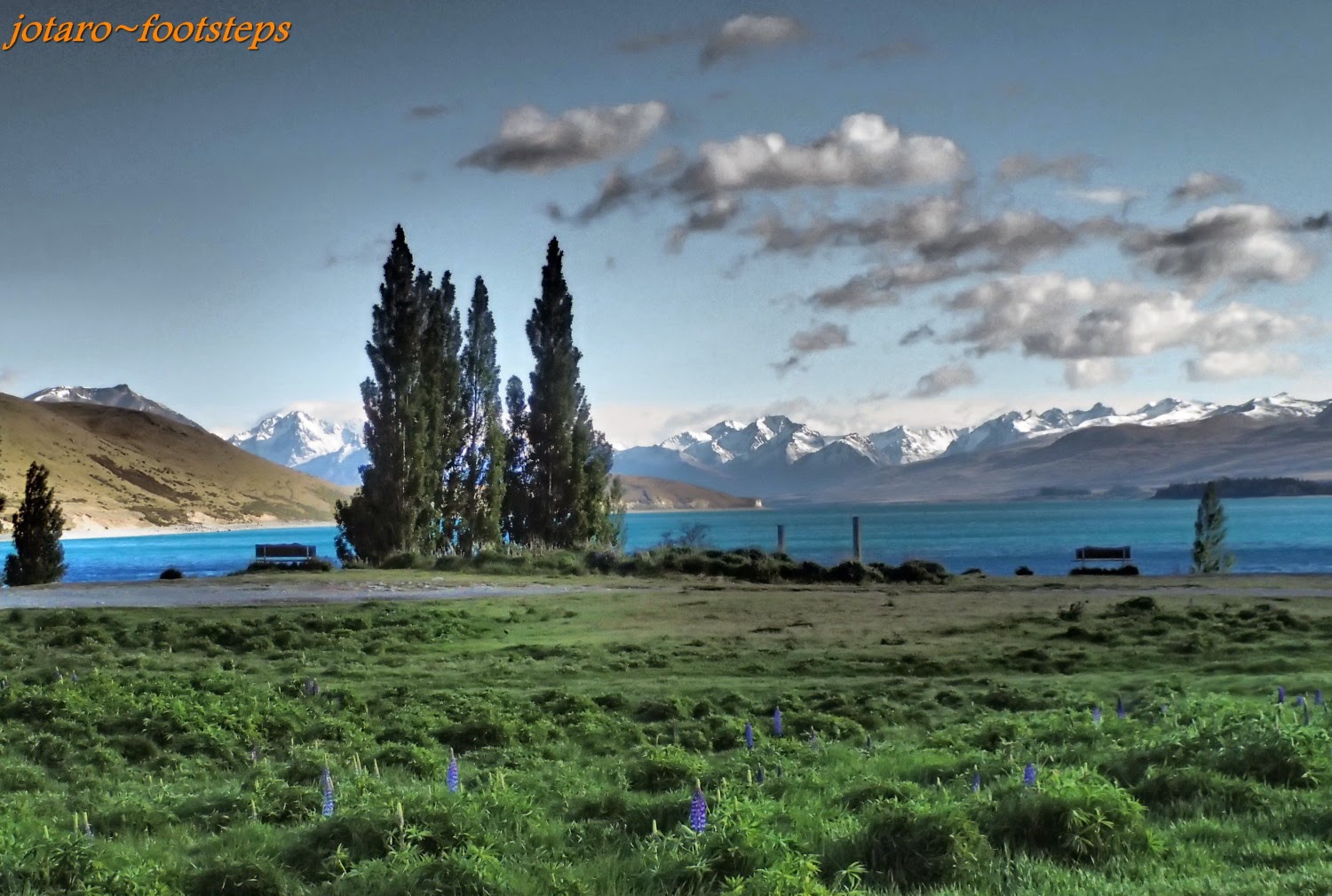 8:00am - Leaving the B&B we drove down to the Tekapo lakeside for a view before leaving town.
The skies were still moody with dark clouds; is this to be our fate while down in NZ, facing bad weather? Even in this weather, switching my camera to Drama mode, I managed to capture this shot of the lake dramatically. 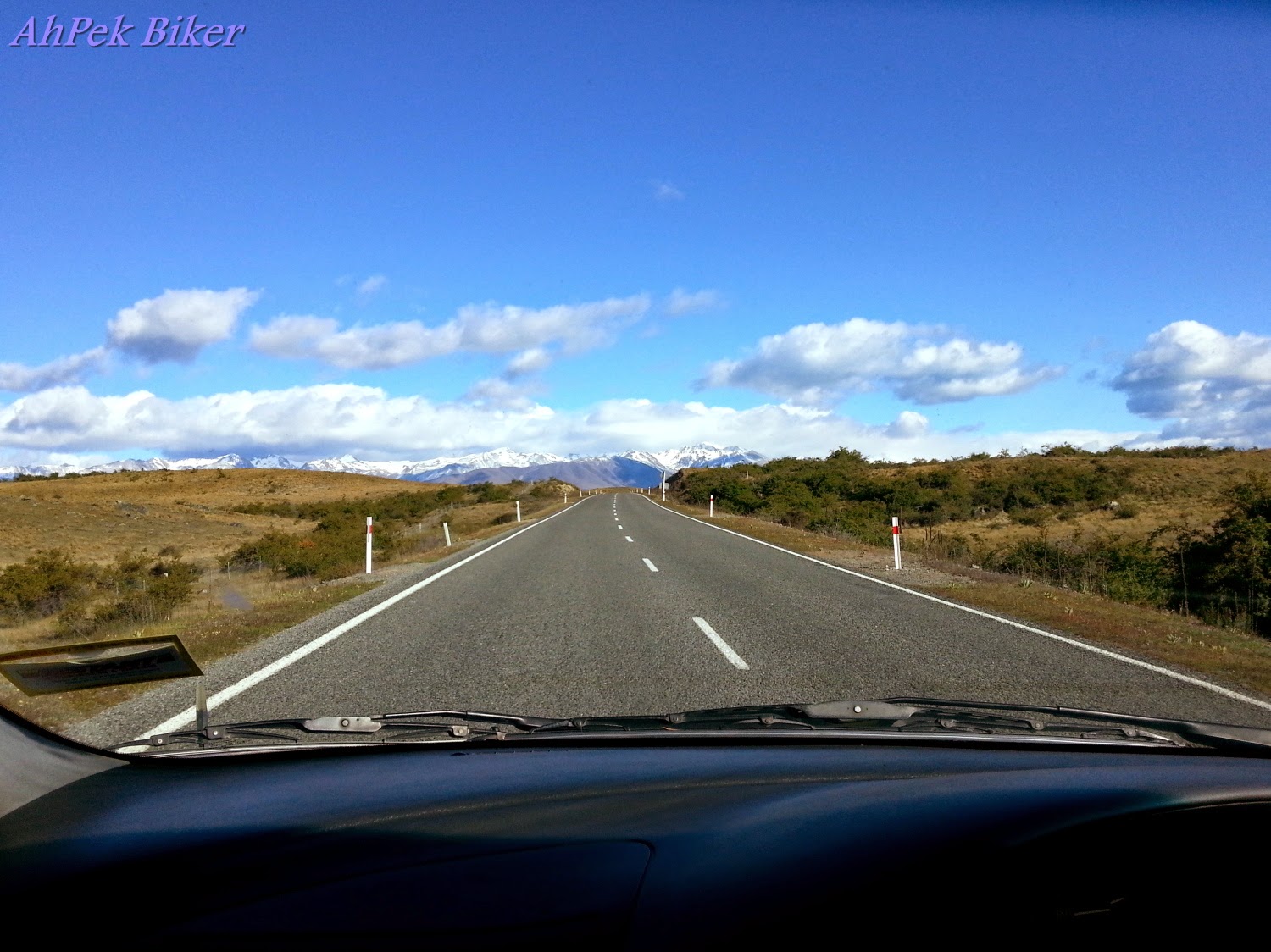 As we left the town, the weather seems to get better. It'll be a good day to drive the 275 km. to Lake Pukaki our next destination. Yong Sin was driving and I was getting ready to snooze so that I will be fresh for my driving turn.
As I dozed off, I heard Yong Sin pointing to a sign and exclaiming, "Huh? Pukaki 20km?" Looks like we got the GPS coordinates wrong or a decimal point at the wrong position. Perhaps it's only 27.5km from Tekapo to Lake Pukaki. Well, let's just follow the road...

... and it led us to one of the most beautiful spots on earth - the Lake Pukaki lakeside. It's one of rocky shores, bright blue waters with snowy mountains afar, all below a blue sky. 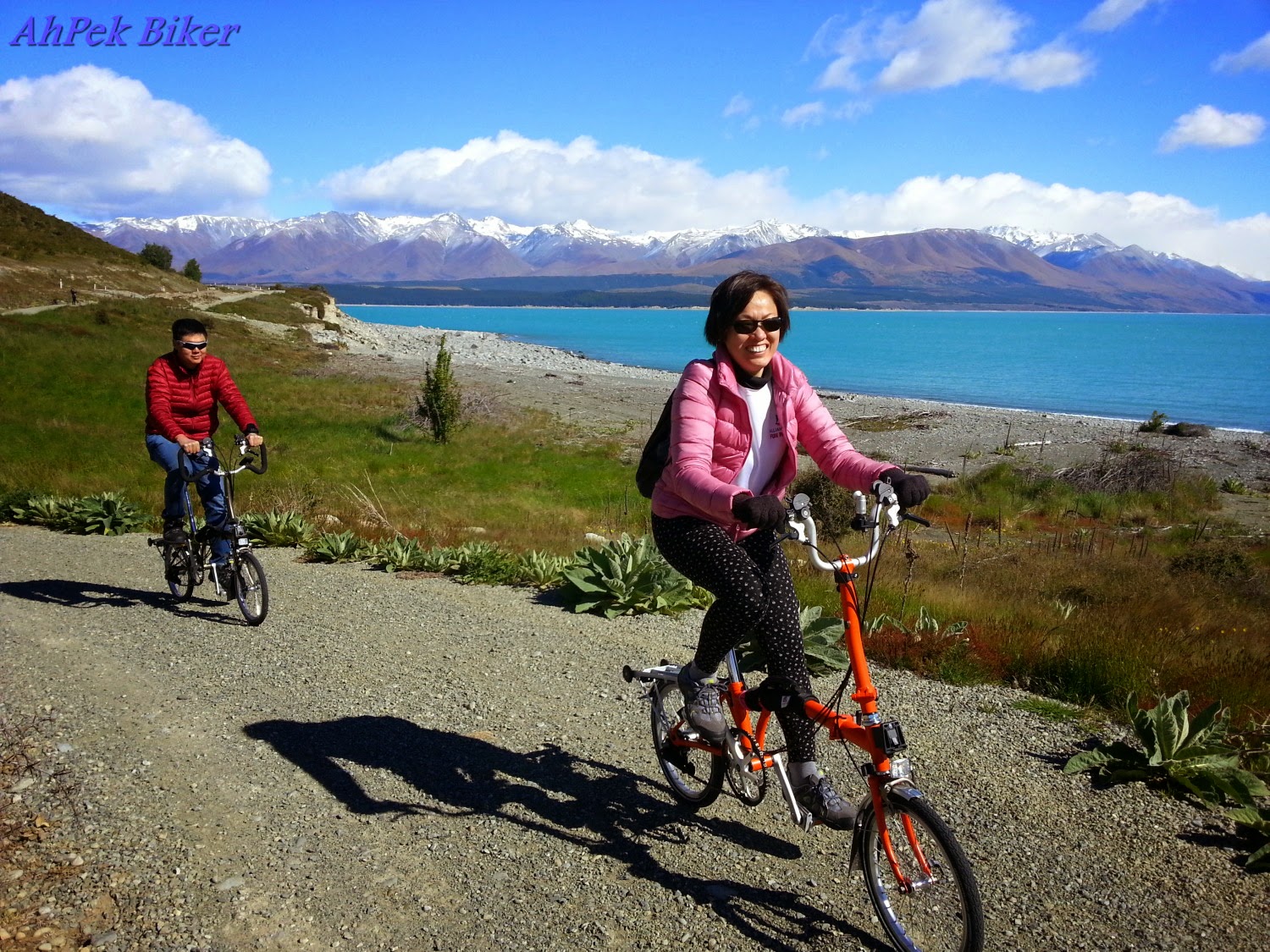 The place was just too tempting. "Let's get our bikes down, we MUST cycle here!" chirped Yong Sin. As expected there was a gravel trail running along the lakeside and happily we were soon cycling on it. 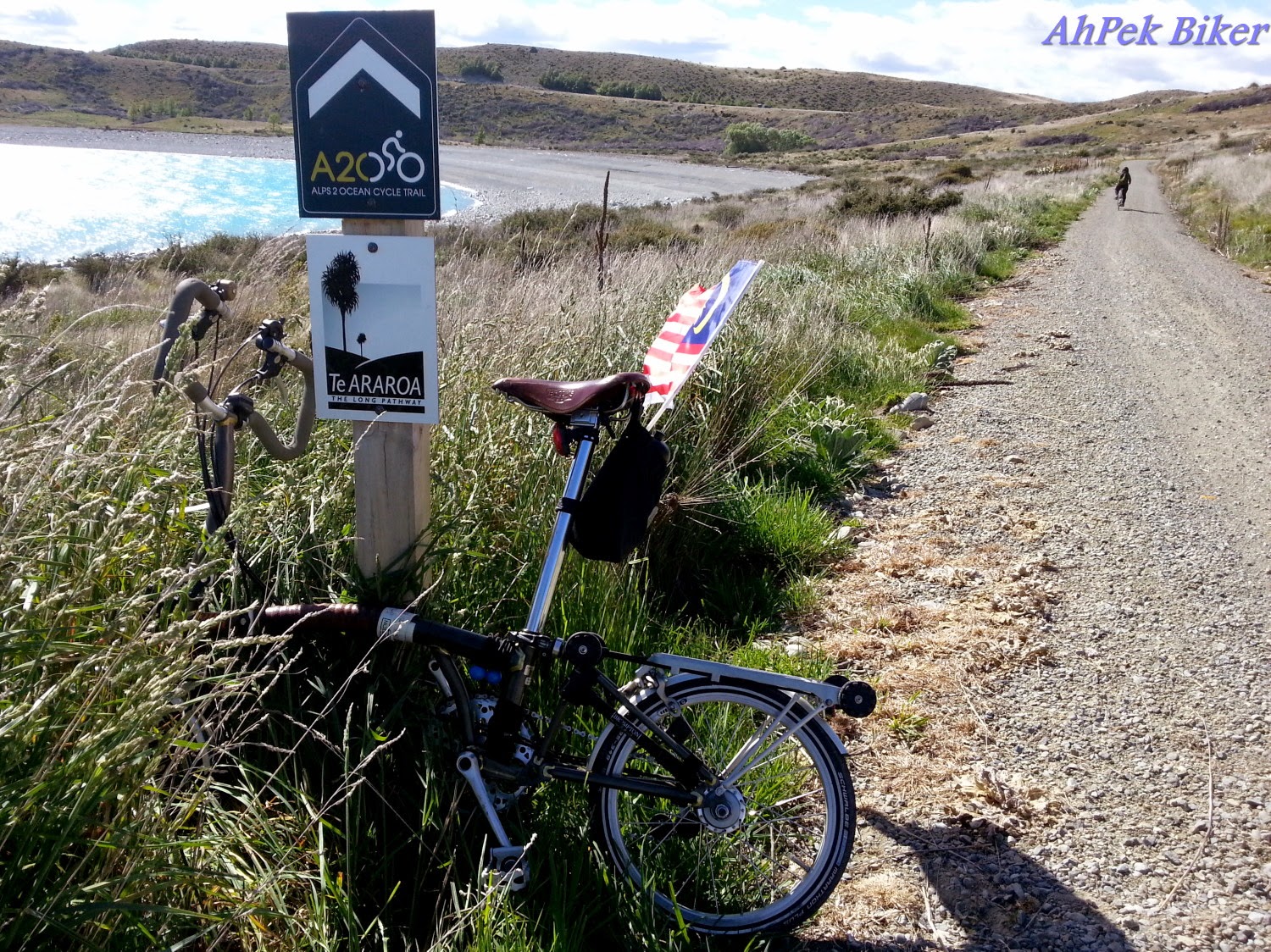 This is the Alps 2 Ocean Cycle Trail that runs from Mount Cook in the Southern Alps down to Oamarua at the edge of the Pacific Ocean. At 301 km., it is NZ's longest cycling trail that runs through lakesides, limestone & clay cliffs, Maori art, etc. Unfortunately we did not have the time to cycle the whole trail, having to be contented to ride just along the this lakeside.
With our 16"-wheel Bromptons, cycling on these loose gravel trails were not easy, especially when going downhill and round bends. A couple of times I nearly skidded and fell as my tires "ate" into the loose gravel. After a while we got the hang of it and also it was good training for our later riding on the Central Otago Rail Trail which is of similar construction. 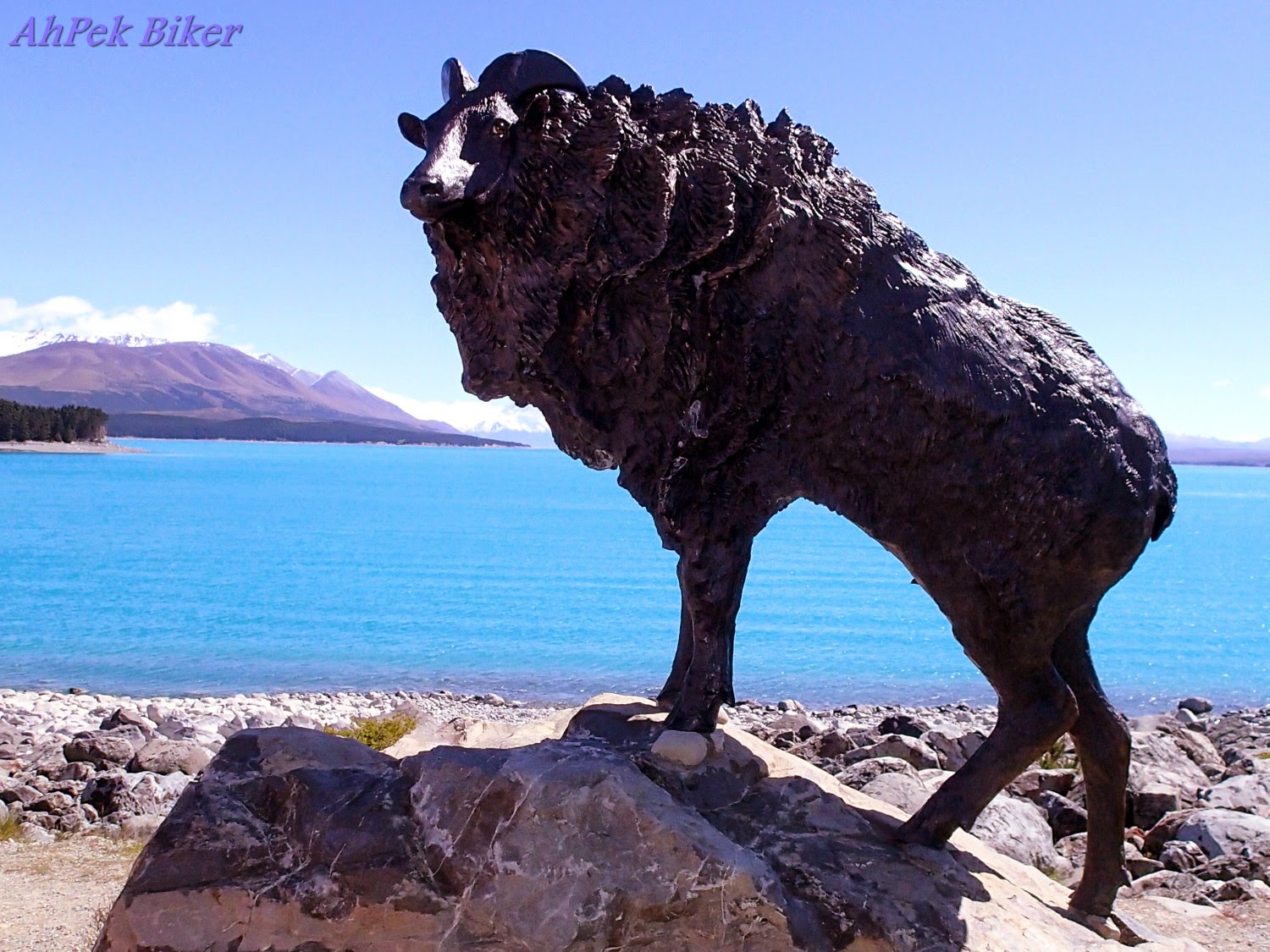 11:00 am - Further on, we made another stop at the Lake Pukaki Visitor Centre where we had lunch of our packed fried meehoon near this statue of a Himalayan Tahr mountain goat.
These goats, native to the Himalayas adapted quick to the Southern Alps and were soon overgrowing the native species. Their numbers is now "managed" by controlled hunting to limit their population to 10,000 within their range of 50,000 sq. km. of the Alps.
At the Information Centre is also the Mt. Cook Alpine Salmon Shop which sells fresh and smoked salmon harvested from the lakes.
Underneath the watchful eyes of this Tahr, we had our brunch of the packed meehoon. The wind did make our eating harder as it kept blowing our packets awry; the wind in NZ can get pretty strong as we were to find out much later. 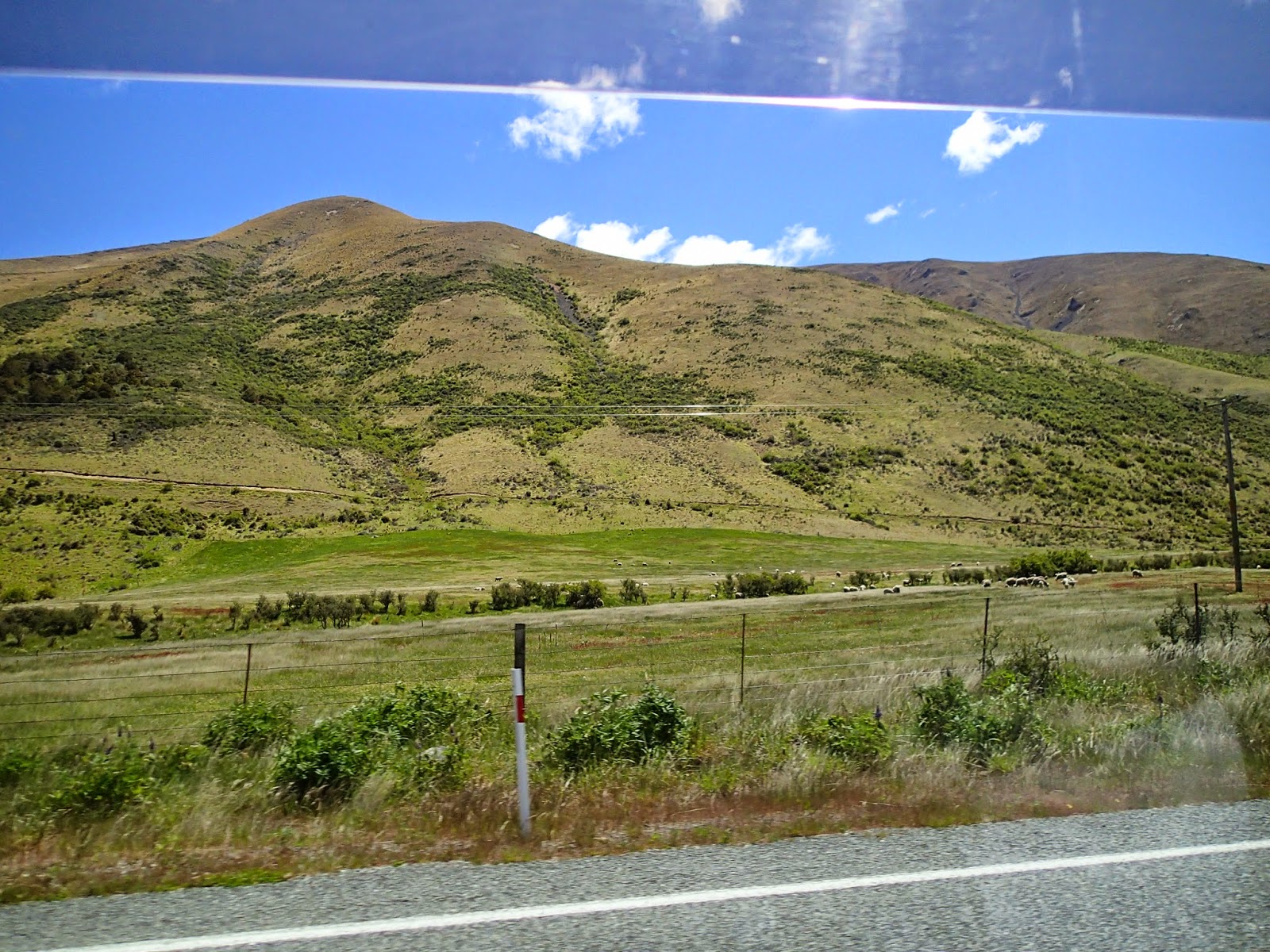 Continuing our road trip towards Wanaka, as we left the alps, the scenery slowly gave way from jagged snowy mountains to that of rounded rolling hills with green pastures. 2:00 pm - We arrive at our next destination, the Wanaka Puzzling World. Although it did not involve any cycling, this odd looking place turned out to be one of the fascinating places that we visited.

We were quite taken in, befuddled, bemused, bewildered by the inter-active exhibits here; exhibits that such as: 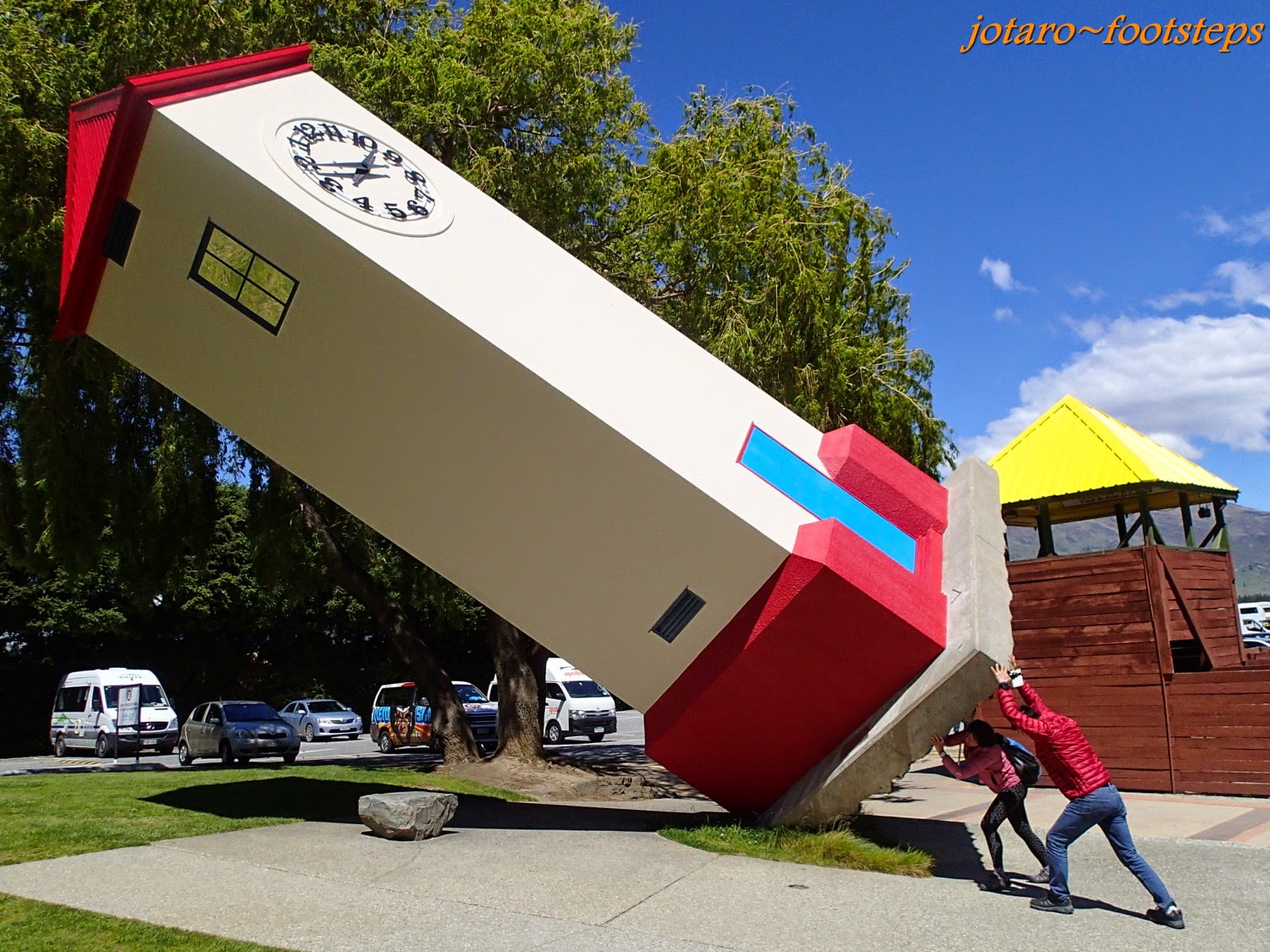 A leaning clock tower that seems impossibly perched on one corner! 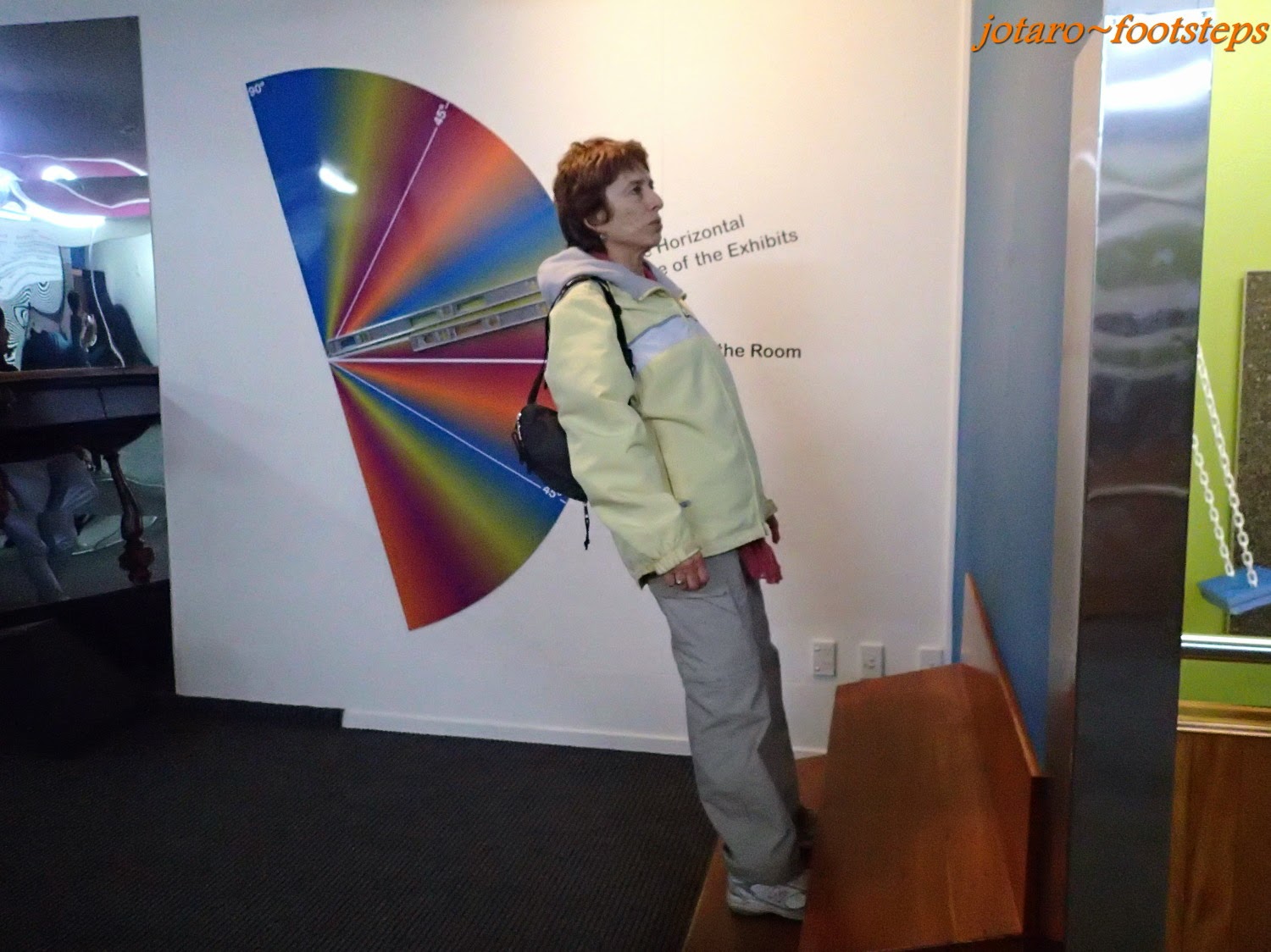 The Tilting House where we defied gravity by standing atilt without any aid. 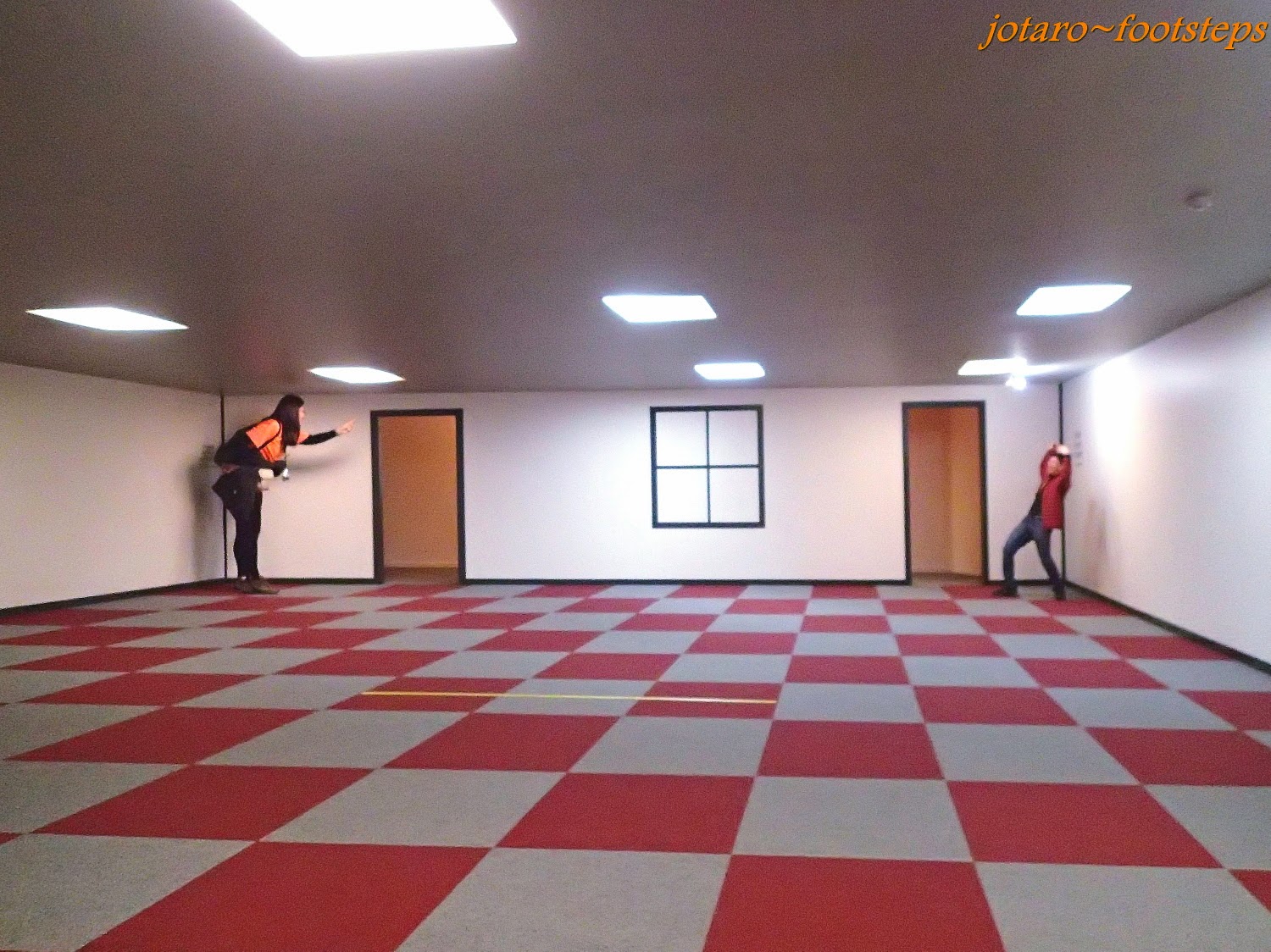 Became giants and dwarves in the Ames Room. 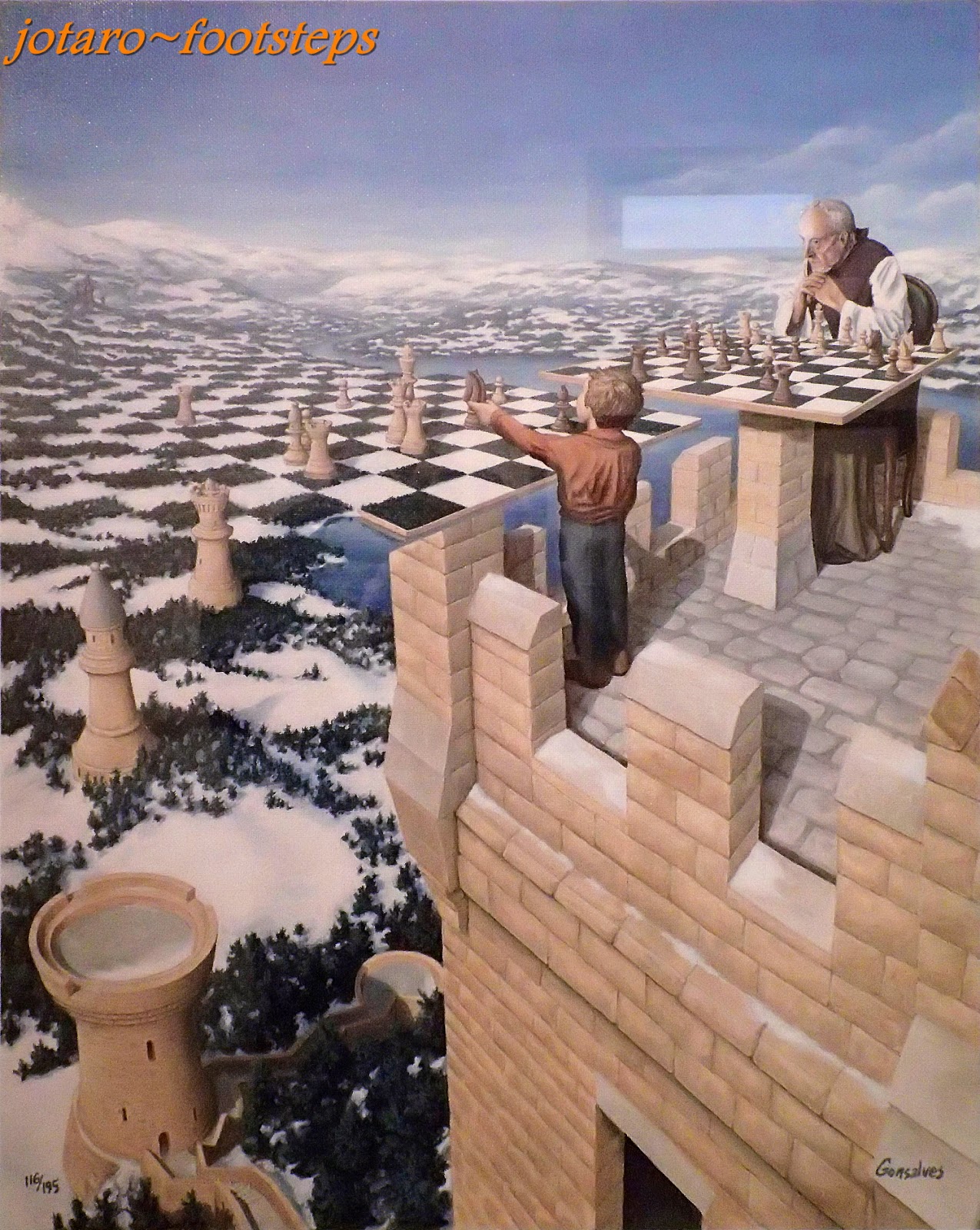 Got stumped by illusionary paintings. 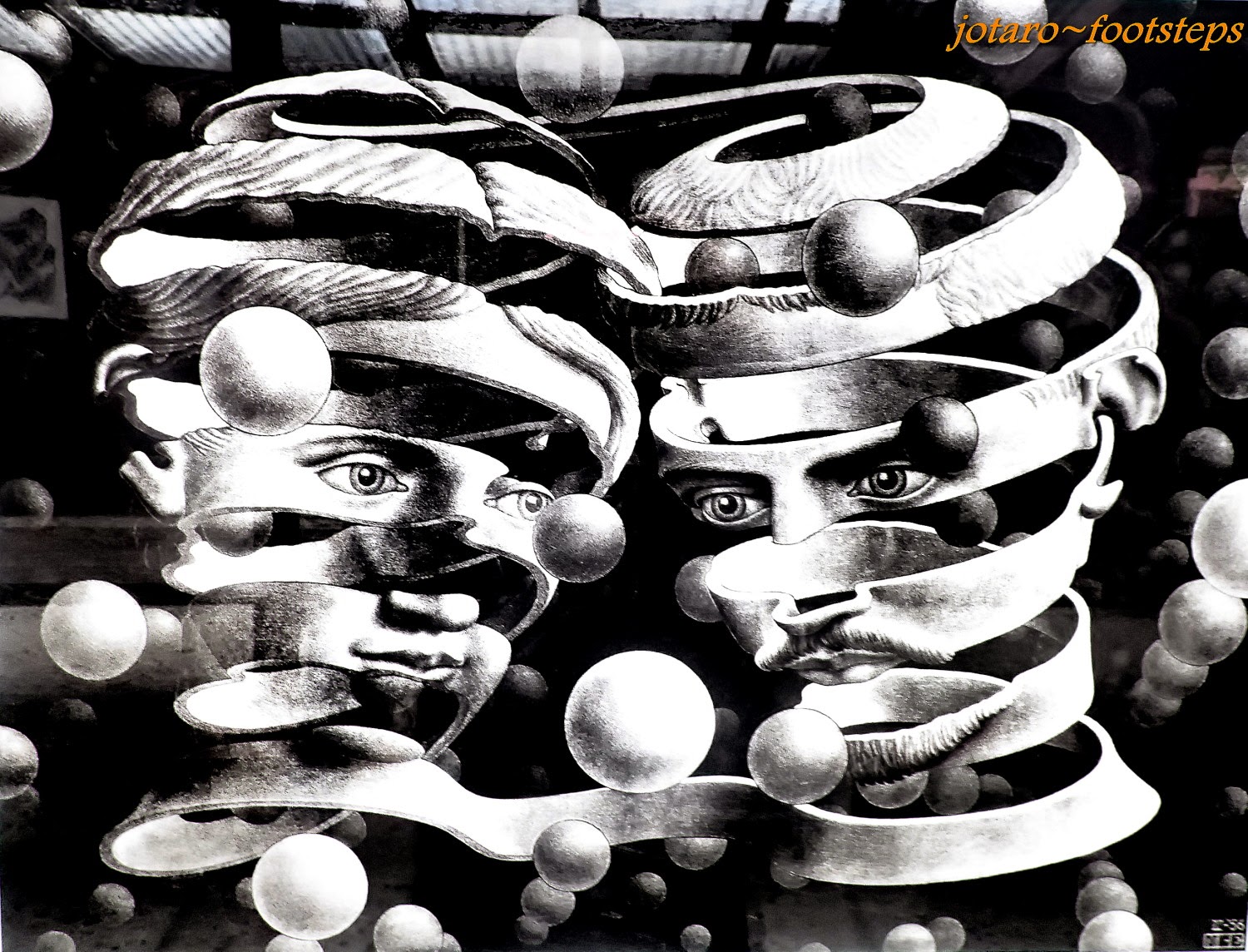 And sat staring at painting MC Escher that juggled our minds.... 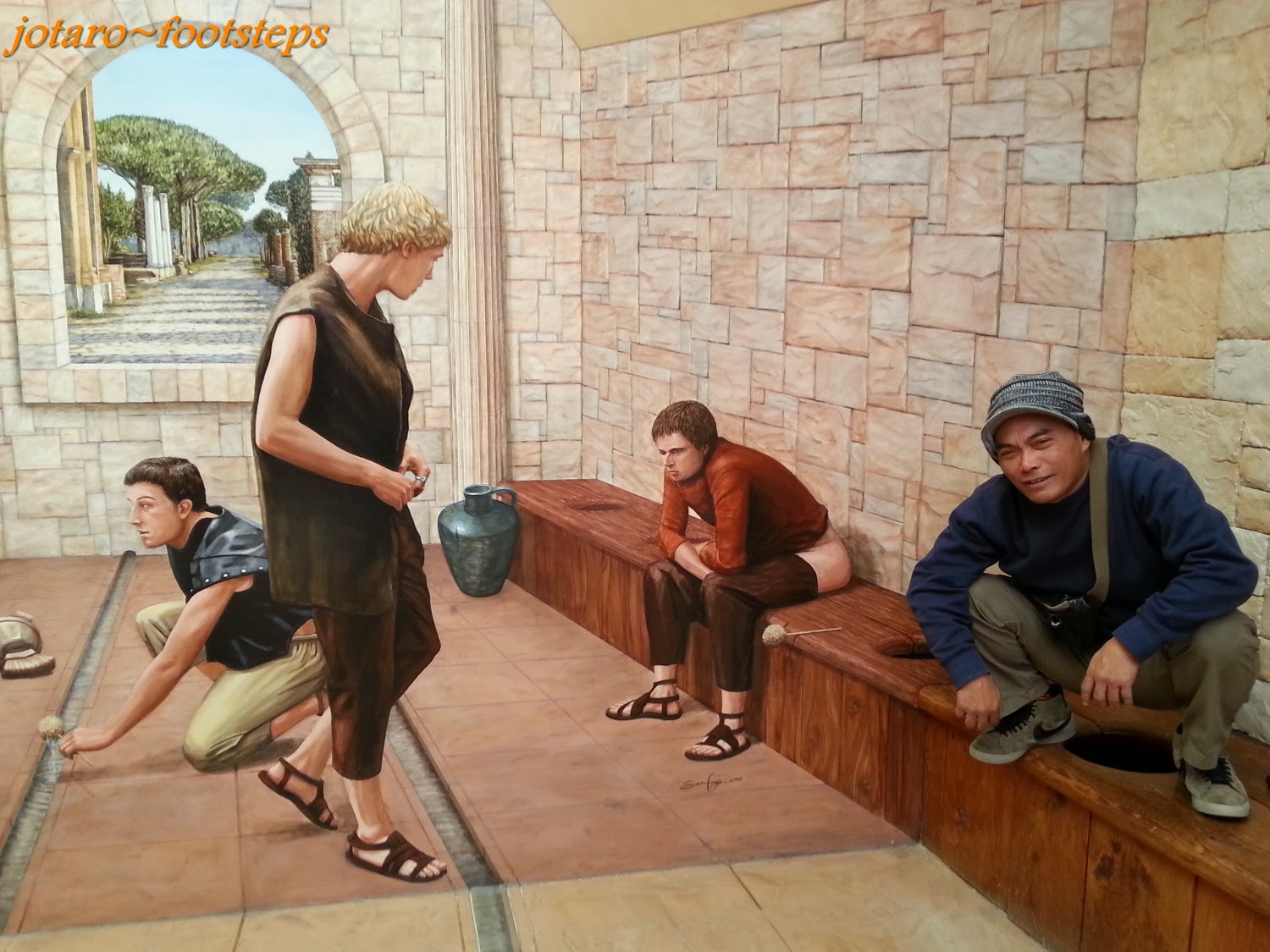 ... and did crazy crapping stunts at a painting that blended with real life items.
(Click here to read more of the Puzzling World). 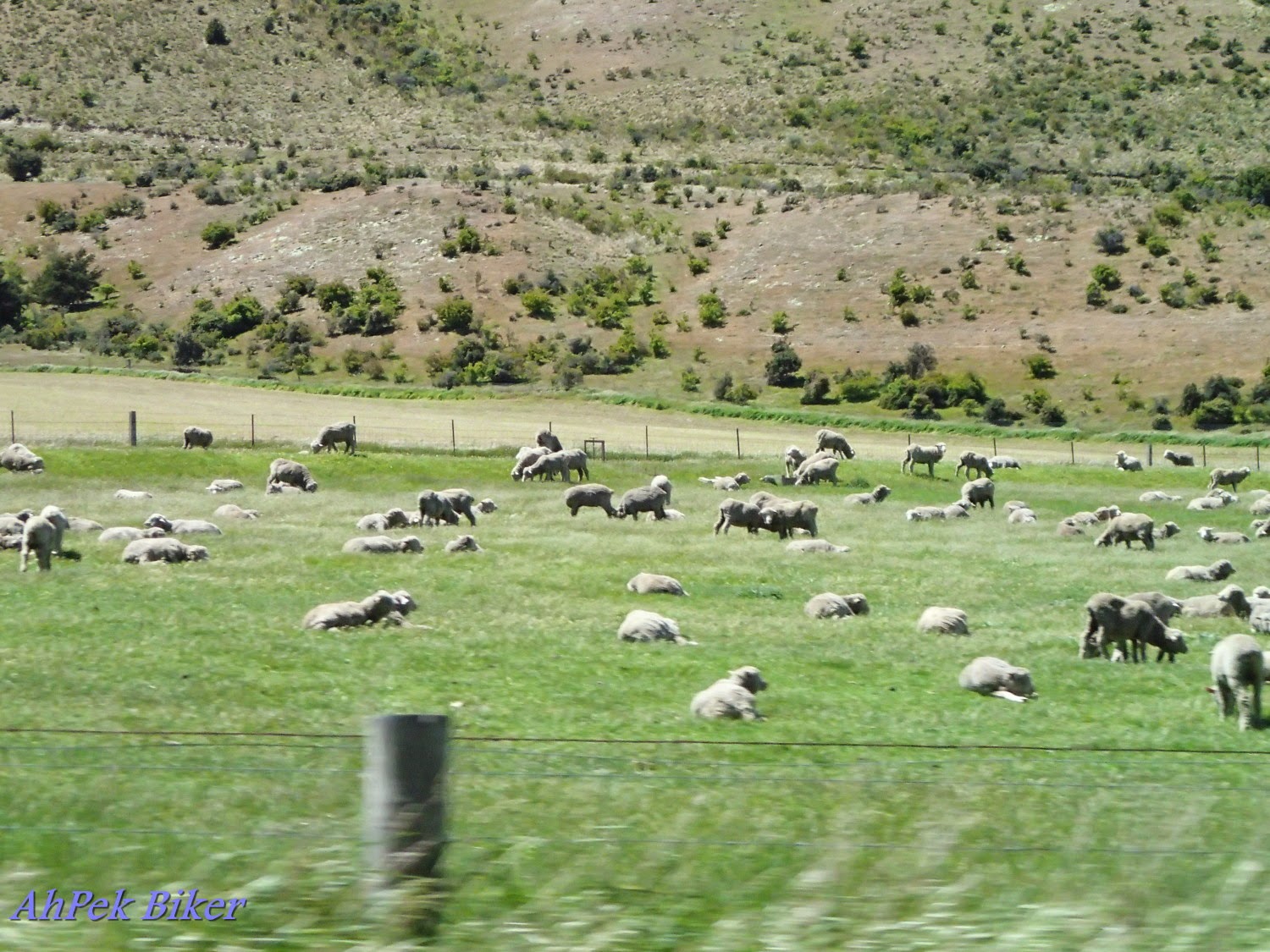 4:15 pm - Leaving Wanaka, instead of using the State Highway 6 running through Cromwell, we decided to drive via the Cardrona road to get over to Queenstown. This Cardrona road led us through green pastures of grazing sheep and cattle, through farmland and even vineyards as we got closer to Queenstown. 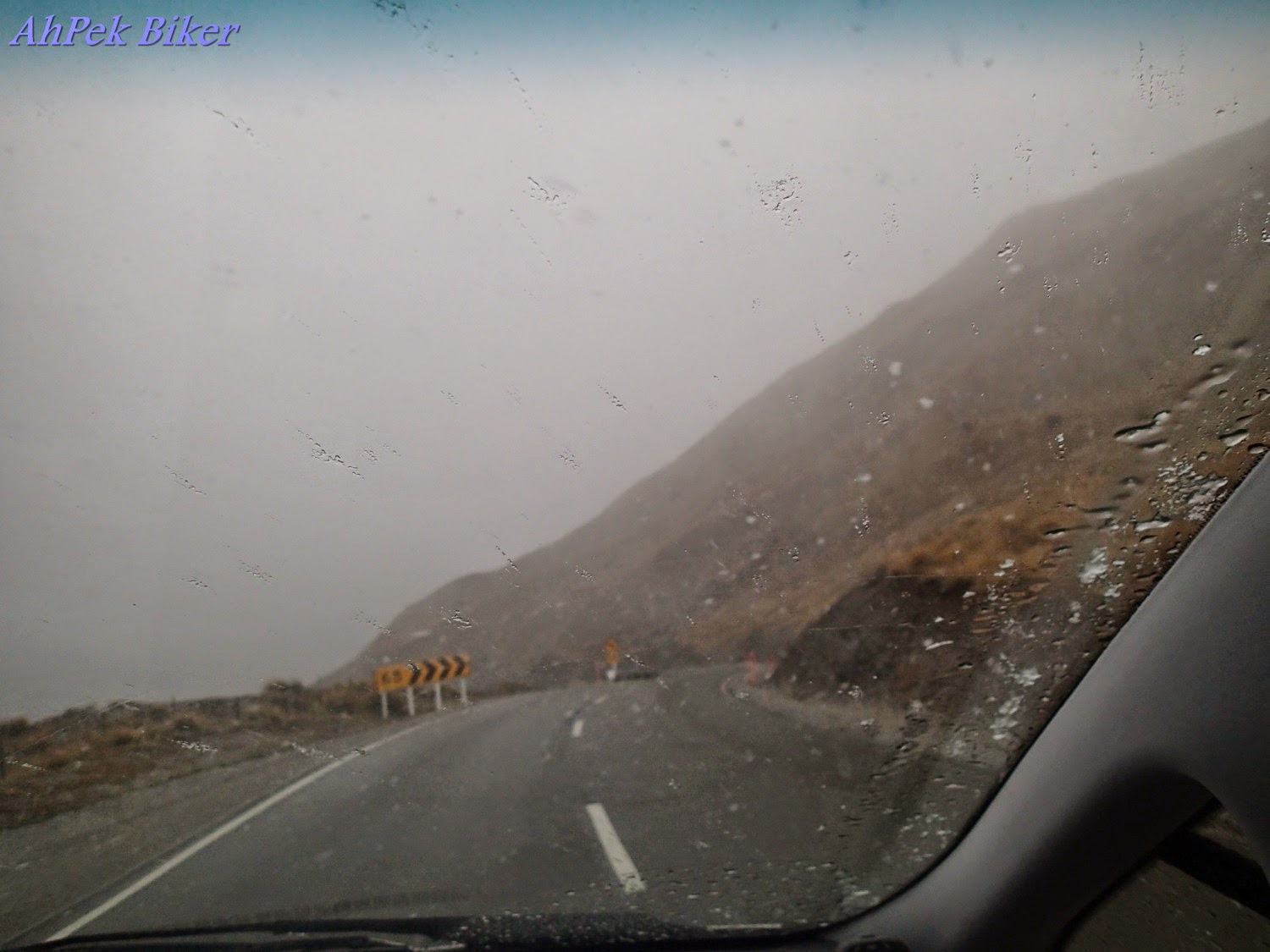 And then it led us up some hilly roads of the Crown Range! Hilly roads with lots of sharp bends.
To make matters worse it started raining... and then the rain turned to hail!
It was my turn to drive then. Being unfamiliar with driving in haily conditions; I drove more cautiously and said a couple of Hail Mary, praying that the big Hail will counter the icy hail. 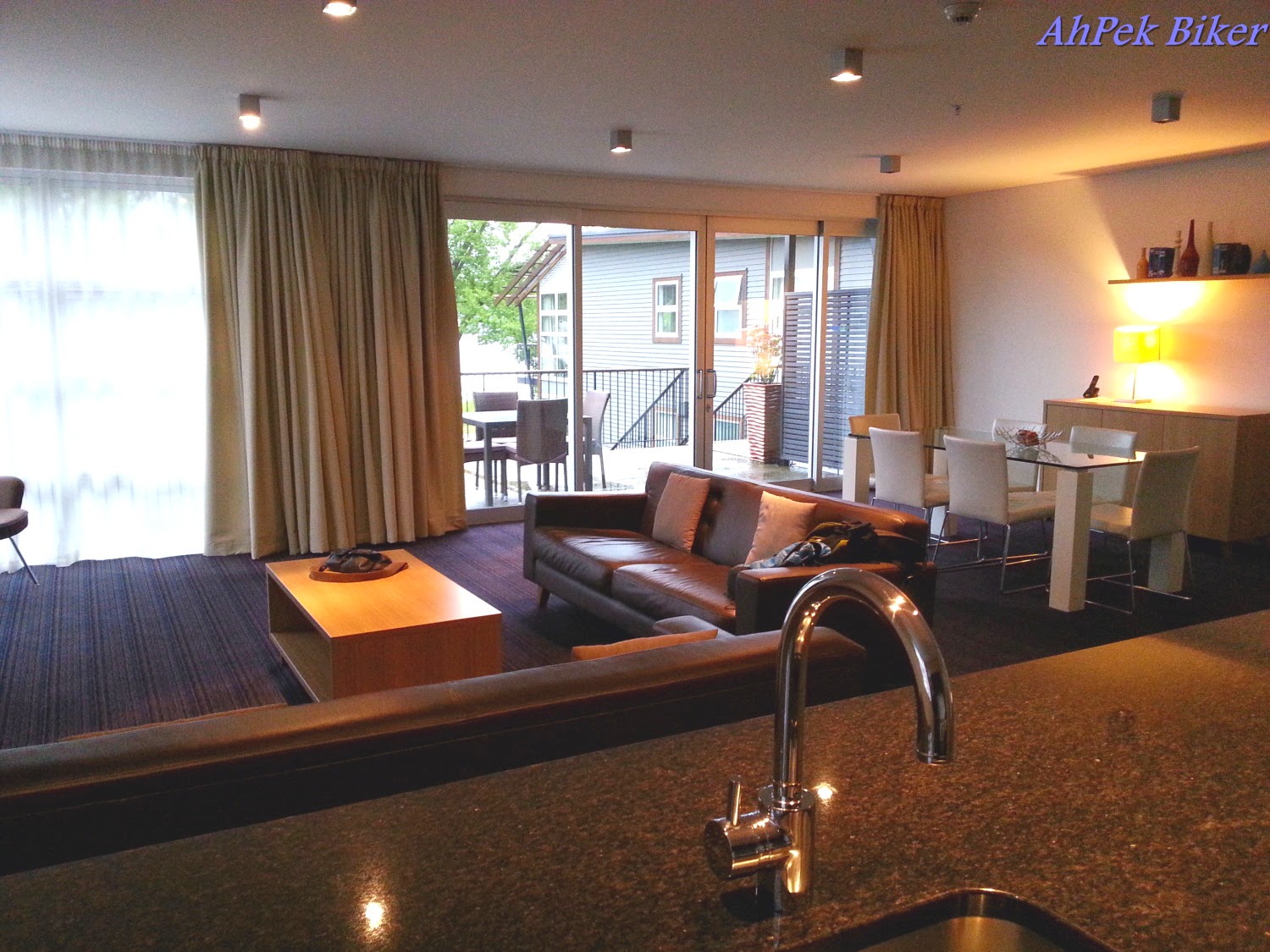 5:45 pm - Queenstown, we have arrived!
We had made reservations at a hillside apartment but it was not ready. Instead we were put into another apartment, the Mantra Marina, which turned out to be even much better than the one we booked. The Mantra Marina was a superb 4-star apartment, finely and cosily furnished with three large bedrooms just for the four of us! 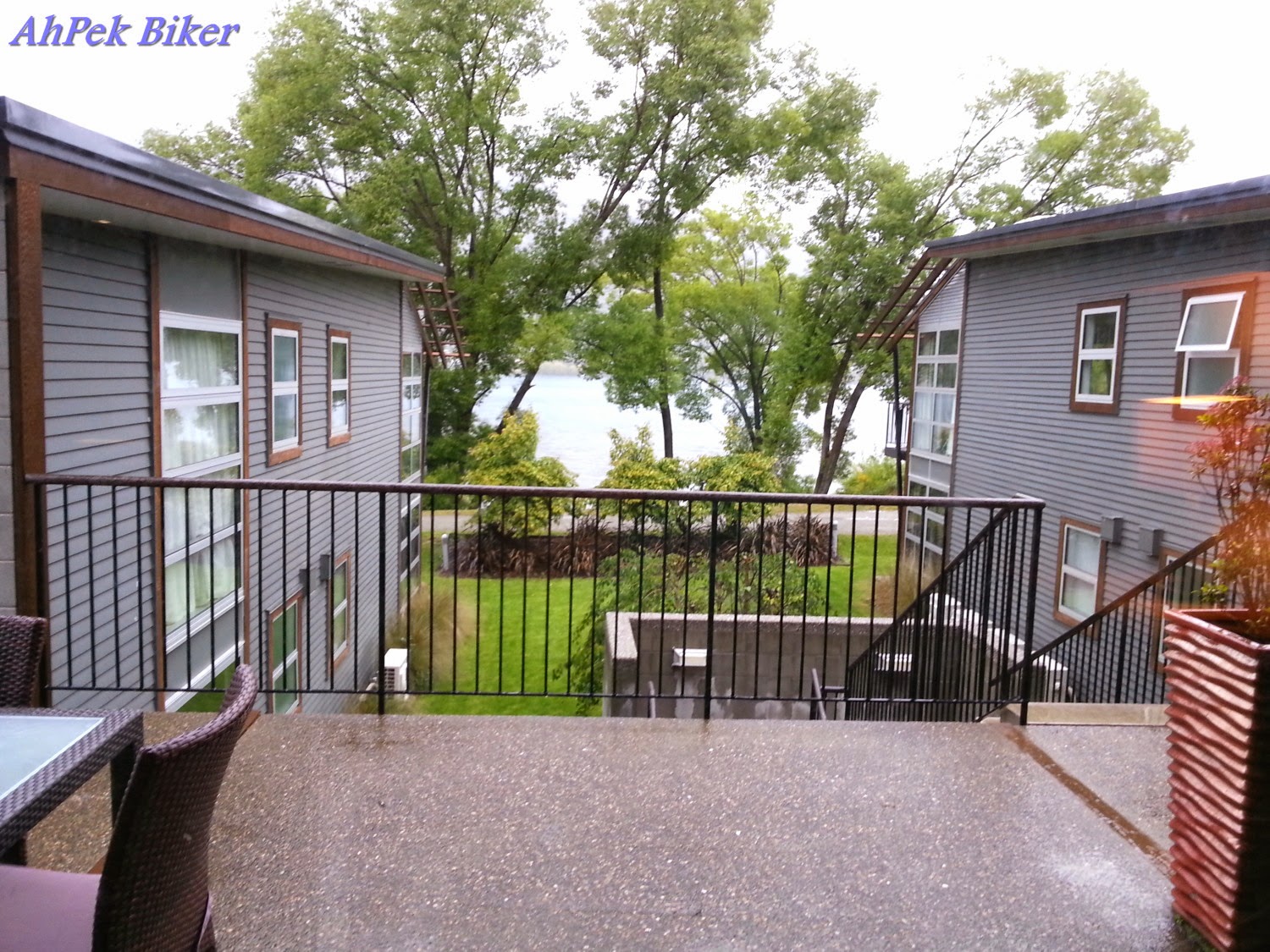 It sits on the lakeside of Lake Wakatipu, with a nice peek view of the lake. Aren't we lucky?
Anyway, our stay here will be for just one night, too short for us to fully enjoy the comforts of this luxurious dwelling. It was as important night though as it provided a restful break on our journey to Te Anau. But we will be back again to Queenstown soon and hopefully back to this apartment too.
We cooked and ate our dinner, retired to our respective rooms early, and whiled the evening away chatting on the net with our friends and loved ones back home.

TILL TOMORROW THEN,
GOOD NIGHT!