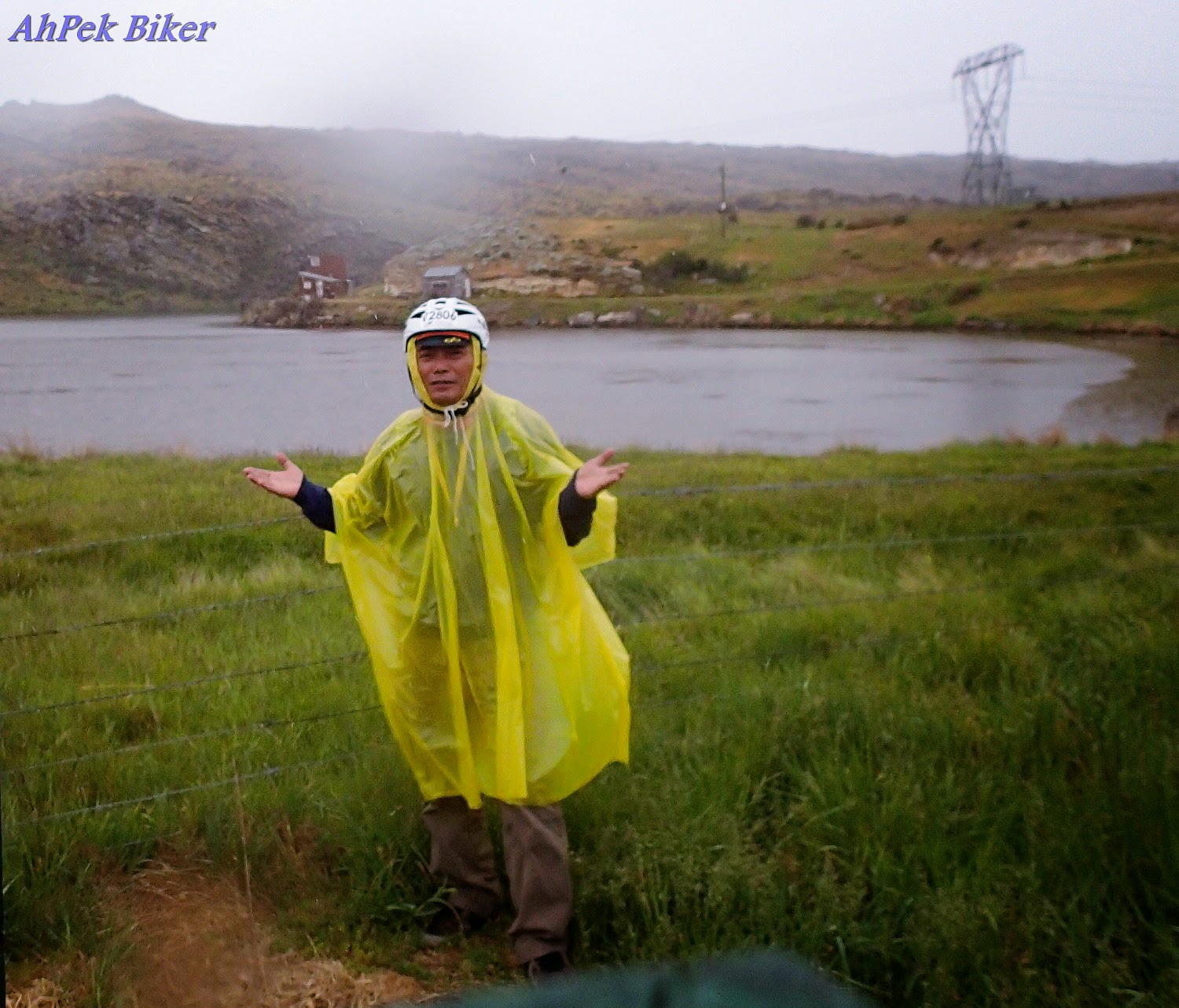 After a good first day, our second day riding on the Otago Central Rail Trail was somewhat different... along the way I was asking myself:
"What AM I doing here?"

What has brought this about, well read on to find out!

Route Recommendations :
1. The Otago Central Rail Trail is opened for all seasons. It spans a total of 152km. from Hyde to Middlemarch. One can start from either Hyde to Middlemarch or vice-versa. Or if one feels not up to doing the whole trail, do just part of it.
2. Most cyclist use mountain bikes with off road tires. But the Otago Central Rail Trail is doable with the 16" wheel Bromptons or similar bikes. Just bear in mind that the trail was a former railroad with the tracks removed and the gravel supporting the sleepers levelled off. These gravel are loose and many have sharp edges, so it will be a good to use tires like the Shwalbe Marathon Plus tires to reduce risk of punctures.
3. Depending on the time of the year, New Zealand can be rather cold. If you are from the tropics do wear appropriate clothing. For the top four layers consisting of a inner thermal (like Uniglo HEATTECH), a t-shirt, a woollen sweater and finally a wind-breaker. For the bottom; undies, a inner thermal pants, jeans or cycling long pants and woollen socks with a good pair of sneakers. For the hands, woollen gloves would be good.
4. Weather in NZ can be unpredictable, do not make the same mistake as me and forget to bring a good raincoat. Things in NZ can be expensive, so it's best to bring one from your home country.
5. With smaller-wheeled bikes, restrictive thick clothings, loose gravel road, slopes, head-wind, cold temperature, etc., it is harder to cycle along the Trail when compared to cycling on tarred roads. A 50km ride on the trail could be equivalent to cycling 150km on roads. So adjust the daily ride distance to suit one's physical capability accordingly.
6. It would not be realistic to carry one's luggage while cycling along the trail, a couple of companies (click here for tour operators) provide luggage transfer from point to point at a charge of NZ10/= per piece per day. Carry a small back-pack to hold a first-aid kit, food, etc., and to keep sweaters and wind-breakers if the weather takes a turn.
7. The tour operators also provide bike rental and support, and assist in booking accommodations & dinner along the trail. They will also recommend ride distances per day, but it's up to individuals to plan to their own liking.
8. The Otago Central Rail Trail passes through varying sceneries like meadows, rocky ravines, beautiful rivers, former railway bridges and tunnels, etc. Plan not to rush through and leave ample time for taking many photos.
9. Wind and rain can hamper an otherwise good ride, use web-sites like m.metservice.com to pre-check the weather so as to be prepared and adjust the route accordingly.
10. If on a budget, most home-stays allow cooking. Cook your own dinner or even pack extra for lunches. Otherwise buy take-away pies or sandwiches, for pies it's best to spend slightly more for better ones. The cheaper pies tend to be jelly-ish with hardly any chunky meat.

Ride Route: Omakau>Lauder>Ida Valley>Oturehua>Wedderburn
The route will take us from Omakau (Oh! My Cow) to Wedderburn (Weather Burn); please pardon us for the play on the places' names, it helped us remember the places more easily.
I did a slight detour at Oturehua...

Today's ride will also be along the steepest section of the trail. From Omakau to the highest point of the trail just before Wedderburn, there was a climb of more than a thousand feet. This should be alright as we are used to climbing.... or so I thought. 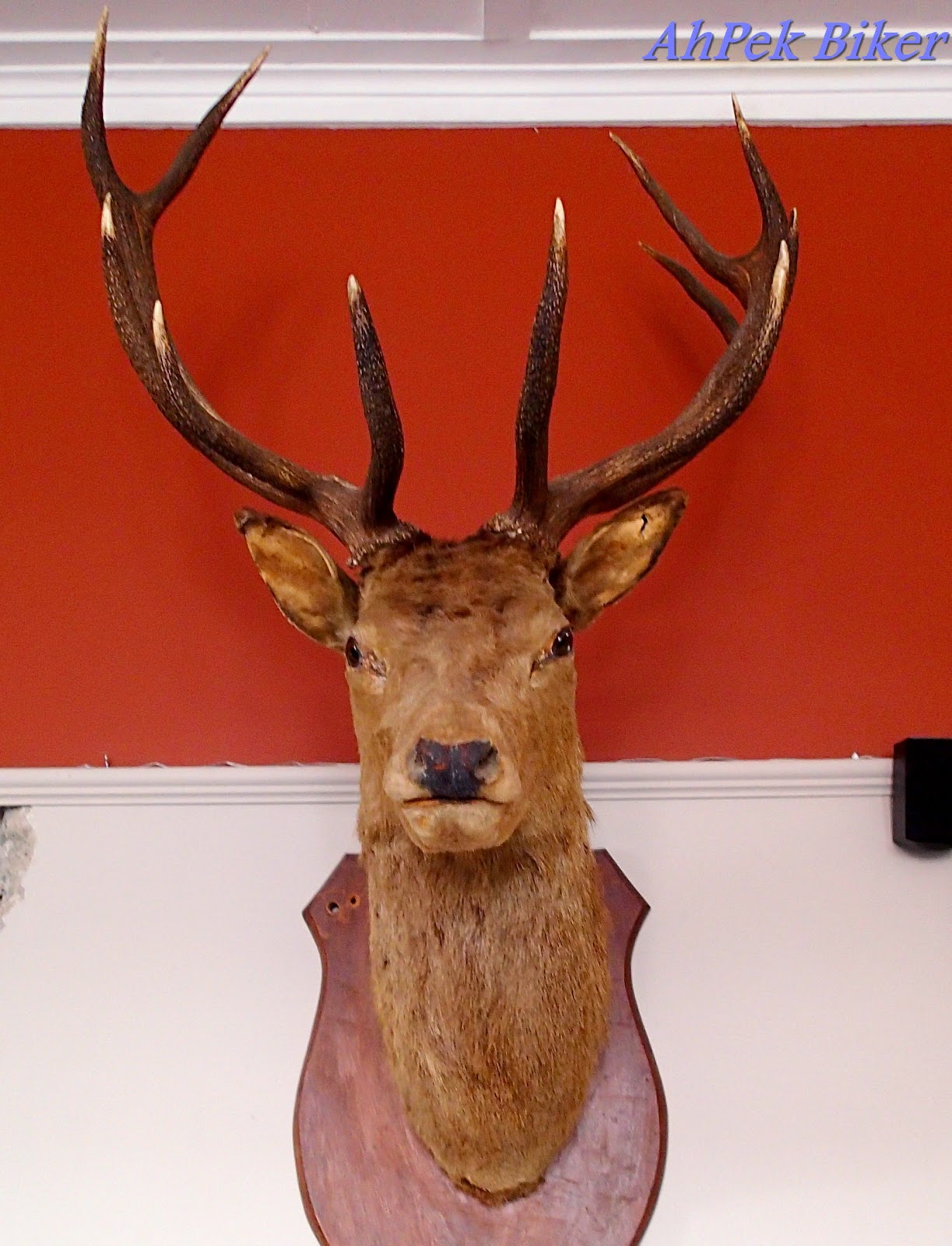 "Good Morning from Omakau!", this deer seems to greet us.
Our homestay at the Omakau Bedpost (a former post office) provided us with a good breakfast - toast, butter, jam, cookies and even muffins. We enjoyed them thoroughly. 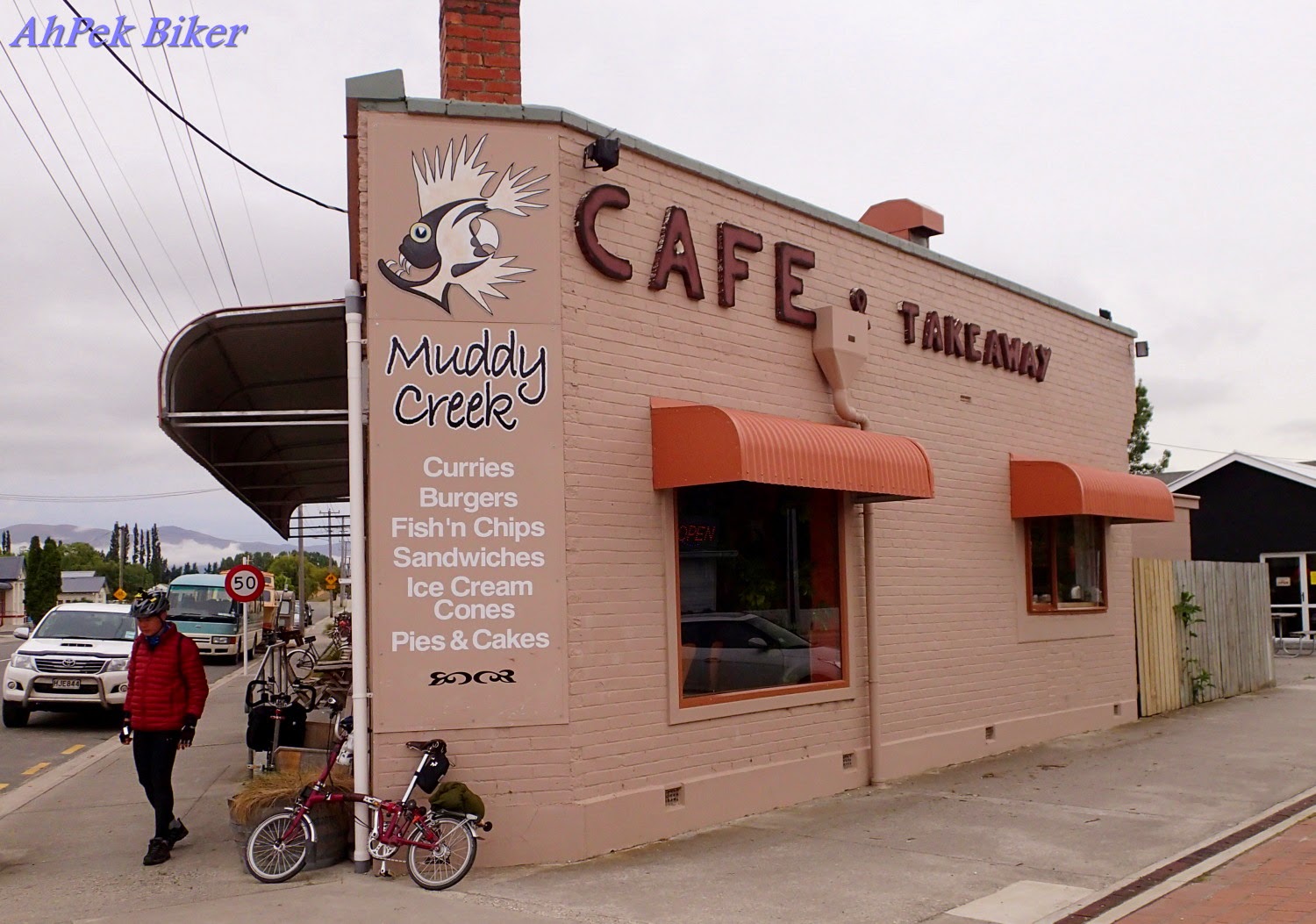 The first thing we did was to go over to the Muddy Creek Cafe; this cafe is renown for it's pies, so we ordered take-aways for lunch later. 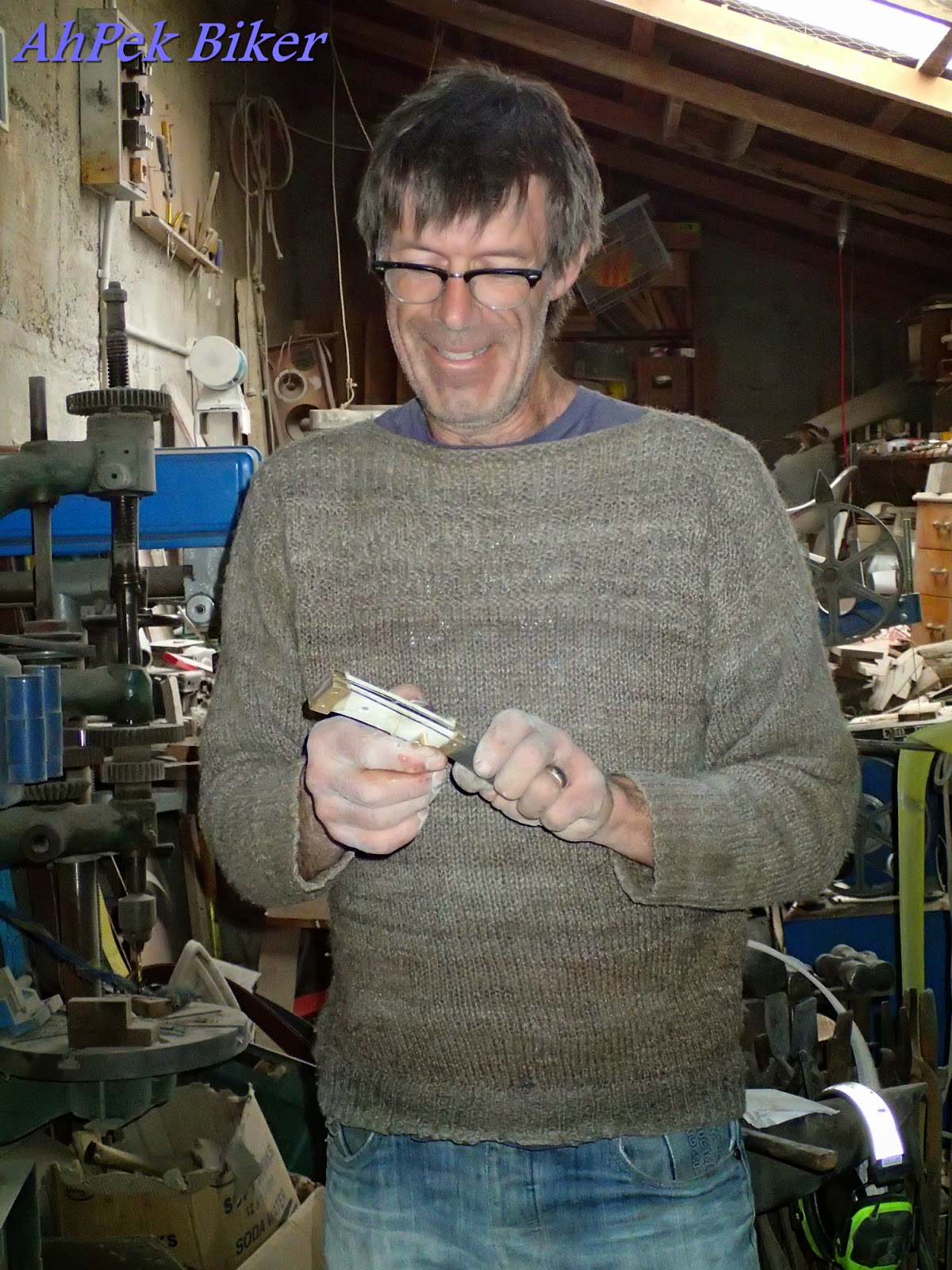 We rode around town exploring it a bit; popped into shebikeshebikes shop/office there to say hello to them. And then we visited Peter. He's a knife maker, a friendly character who showed us how he made his knives and more interestingly how he made the handles from bone ivory.... and there I was wondering why there were bones being dried in front of his shop as we entered. 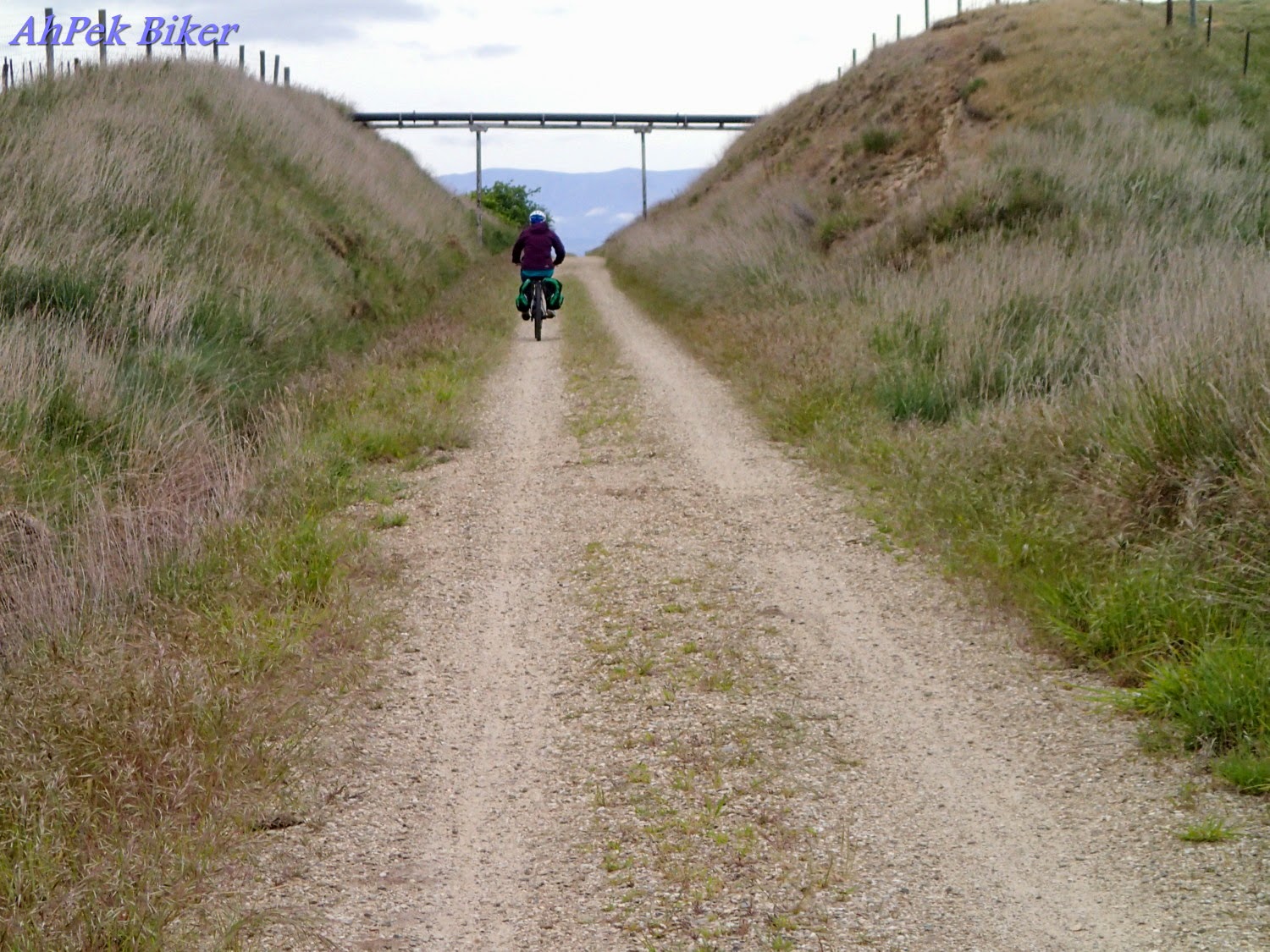 From Harvey Street we approached and started our cycling at the Otago Central Rail Trail for the day; straight away we could feel the difference, the tracks were sloping. But it's ok, it's just a gradual slope, nothing too difficult to handle. 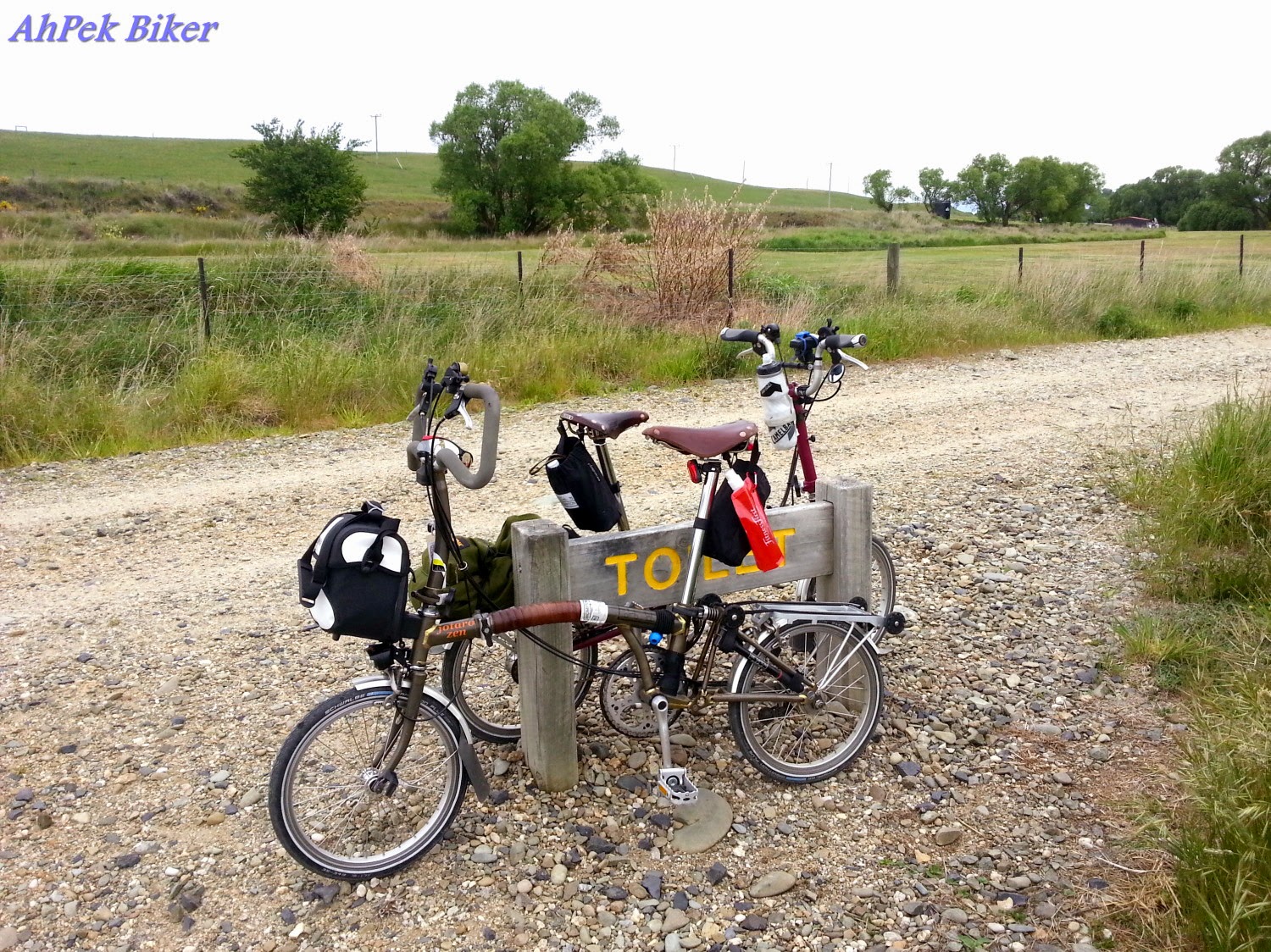 At Lauder - No... these Bromptons are not up for rental, we made a TO-I-LET stop here! 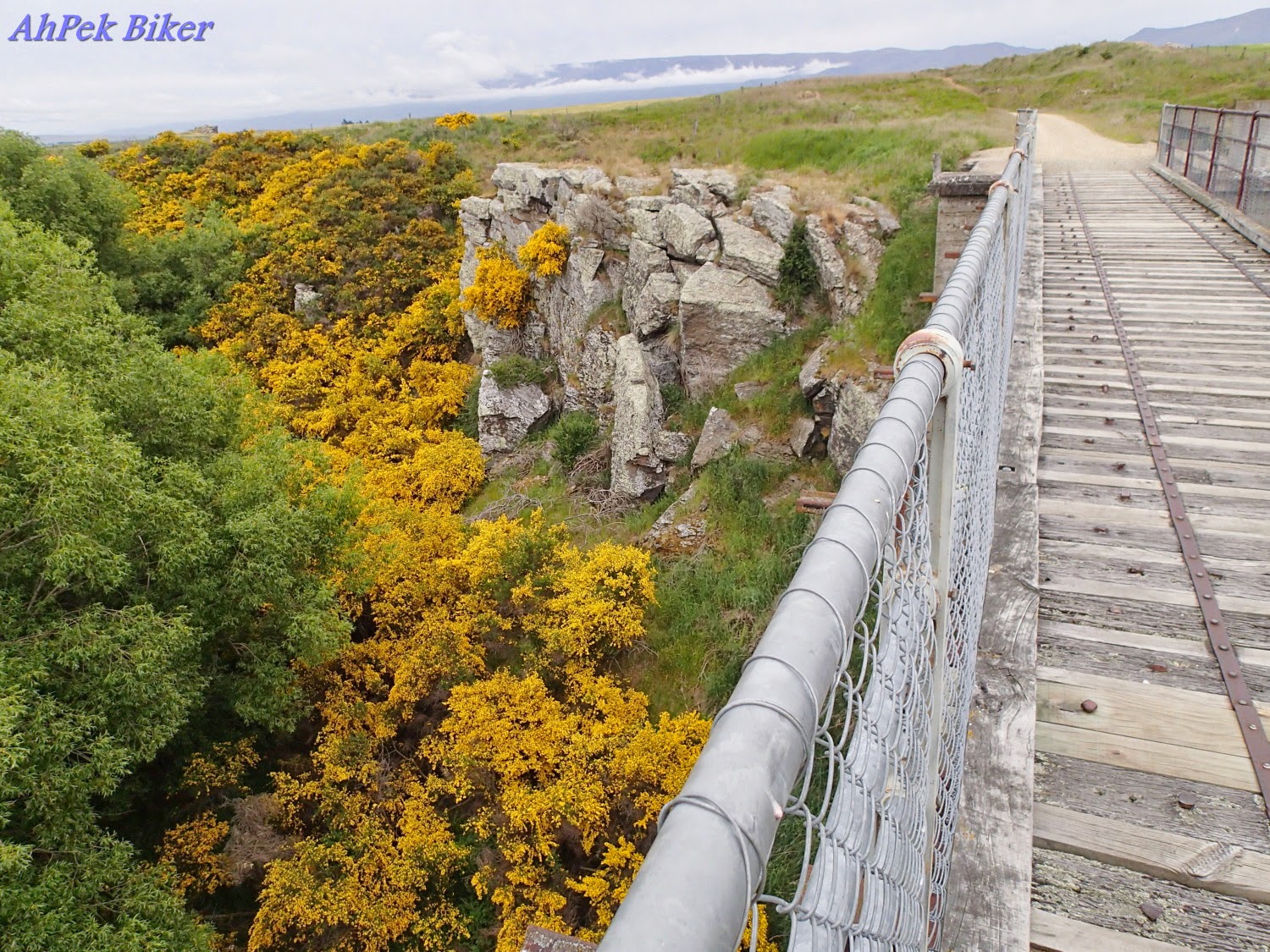 Riding across Bridge No. 1 over the Manuherikia River we stopped to admire these yellow flowers rolling down a gorge. 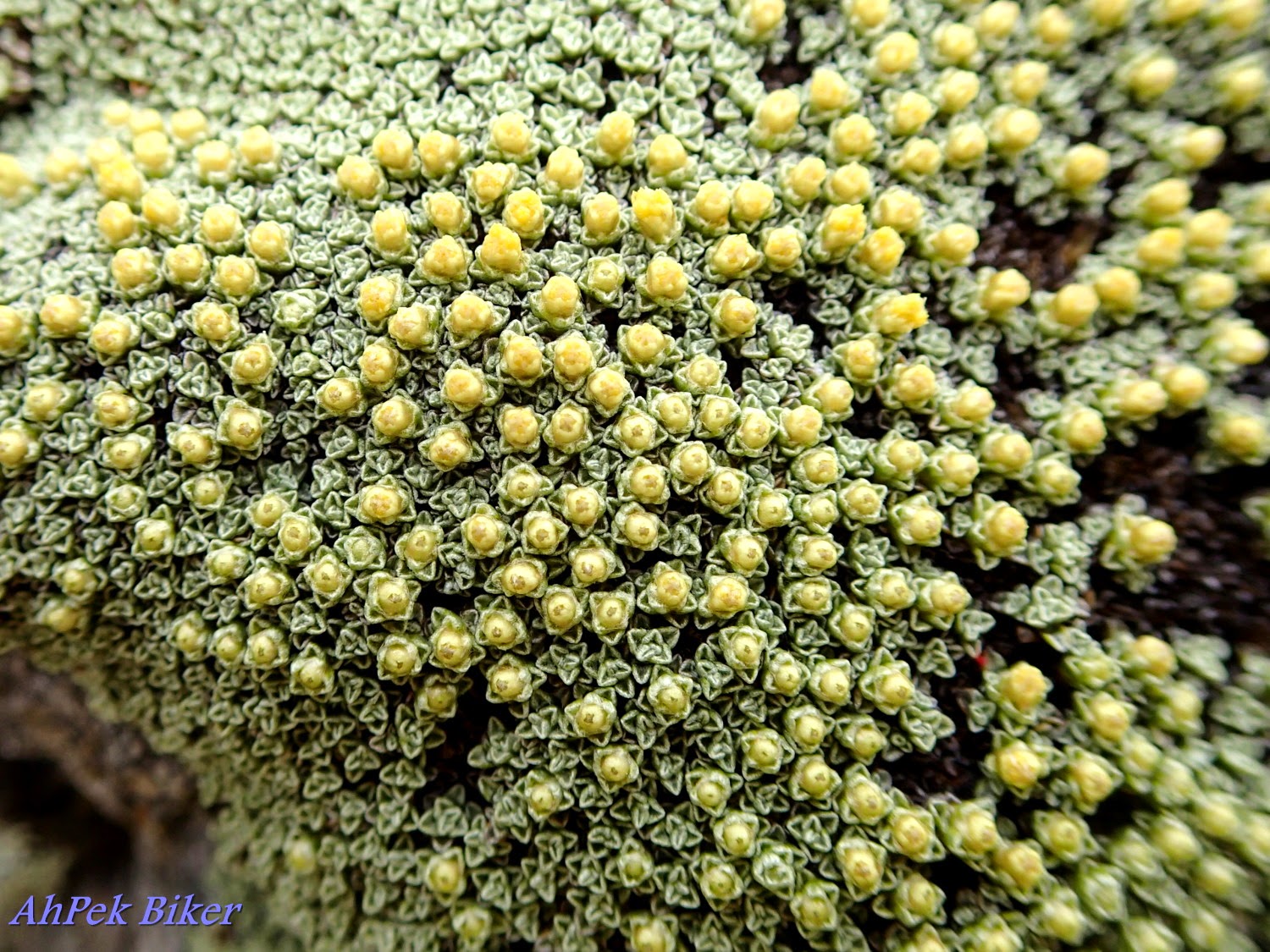 While my camera did a macro-close up admiration of these yellow lichen flowers. 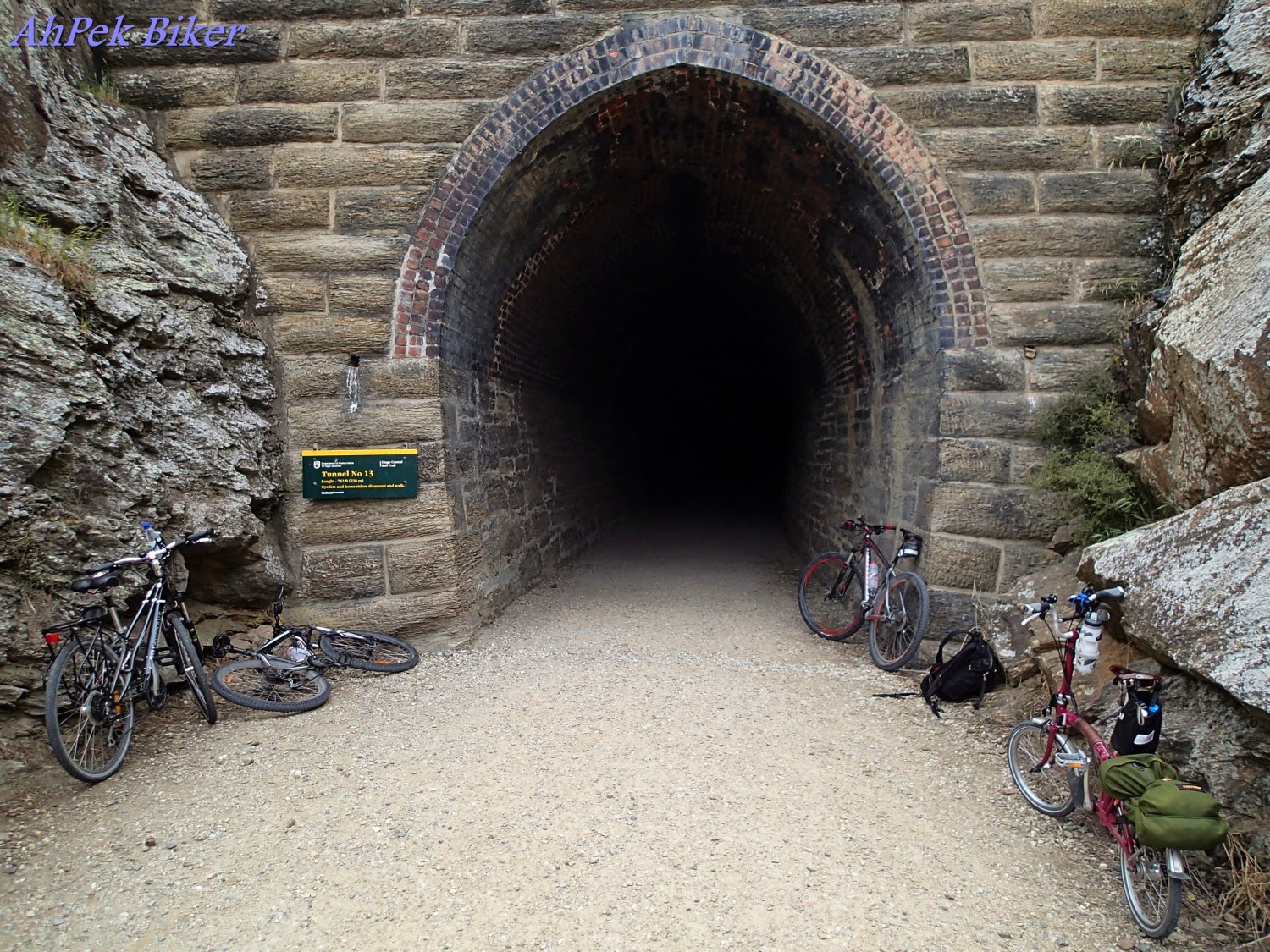 Further ahead was the entrance to Tunnel No.13. The tunnel at 752 feet it is one of the longest along the trail.
We made a stop before entering the tunnel not because we were superstitious or because we were scared of the dark .....

... but because we climbed up the knoll next to it to have a nice view of Ida Valley. 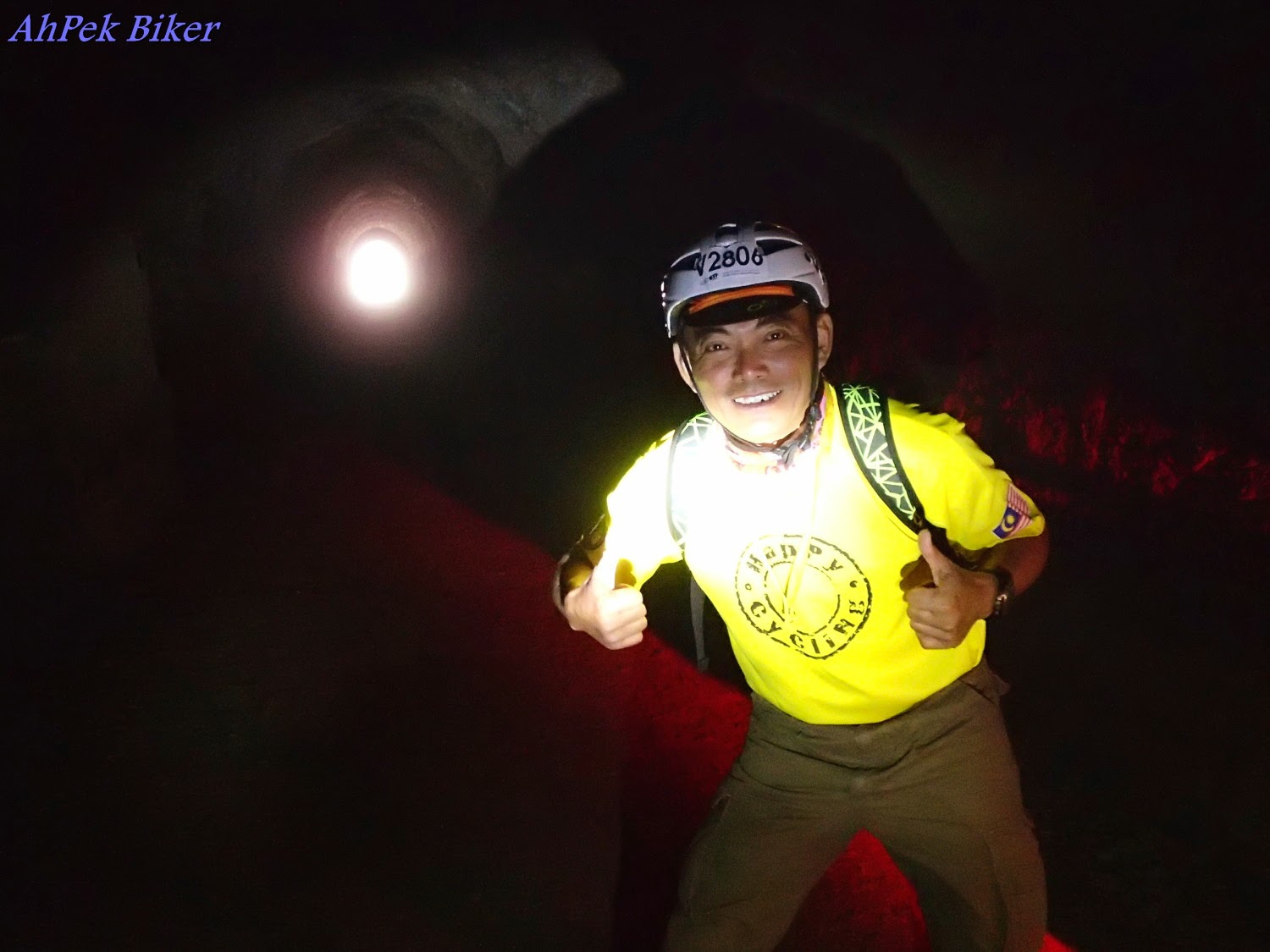 Pushing our bikes through the tunnel (no cycling is allowed in the tunnels for safety purposes), we started shouting "Wooooohoooooo!" And the tunnel echoed back in reply.
Hey! This is fun! 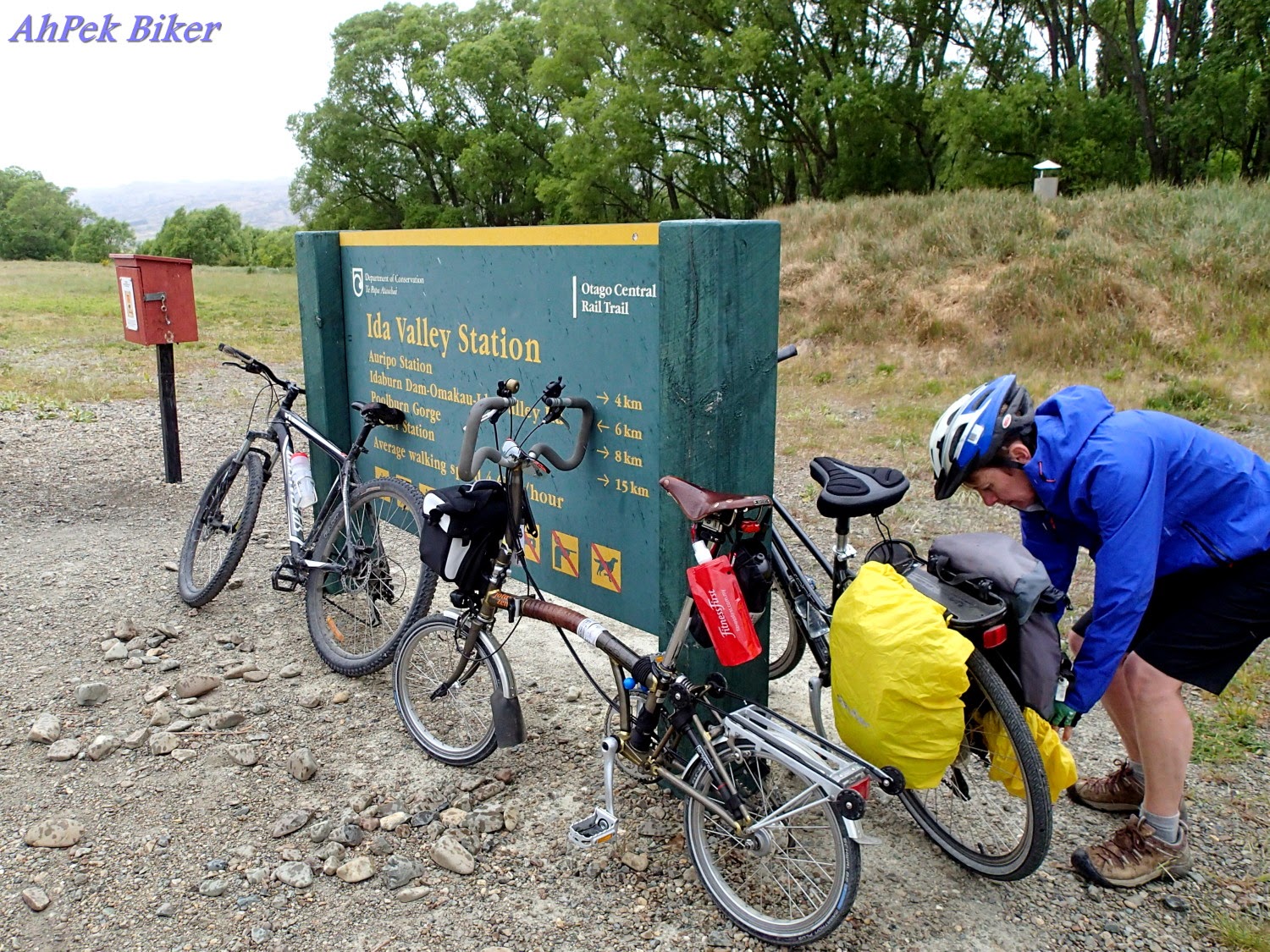 Just before Ida Valley Station it began to drizzle, now this is where things got "interesting".  Other cyclists stopped to put on their raincoats and water-proof covered their pannier bags. I wore the light poncho rain-coat (which I bought at the Queenstown antique shop a few days back). Putting it on over myself and my back-pack, it did not cover me all that well and kept on fluttering as light wind came together with the rain. 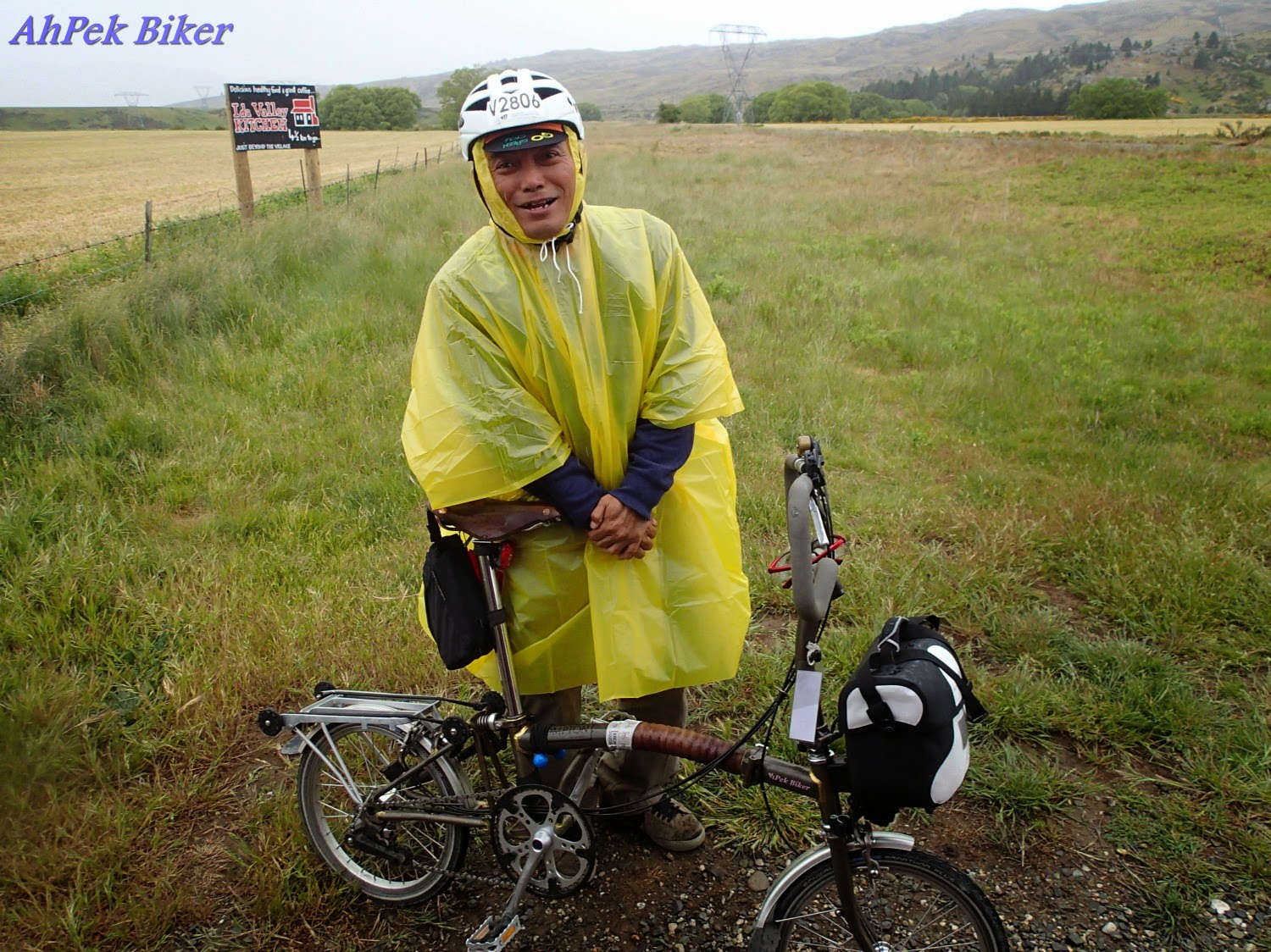 The poncho rain-coat offered some protection but as the wind blew, it's fluttering impeded my cycling and at the same time it graciously allowed some rain in too. My sweater started getting wet. In tropical weather that would be a small matter; but with the cold NZ wind blowing I was soon shivering.
Lonely, cold and wet, I asked myself, "What am I doing here?"
Dang, I should not have forgotten to bring my raincoat over from Malaysia. 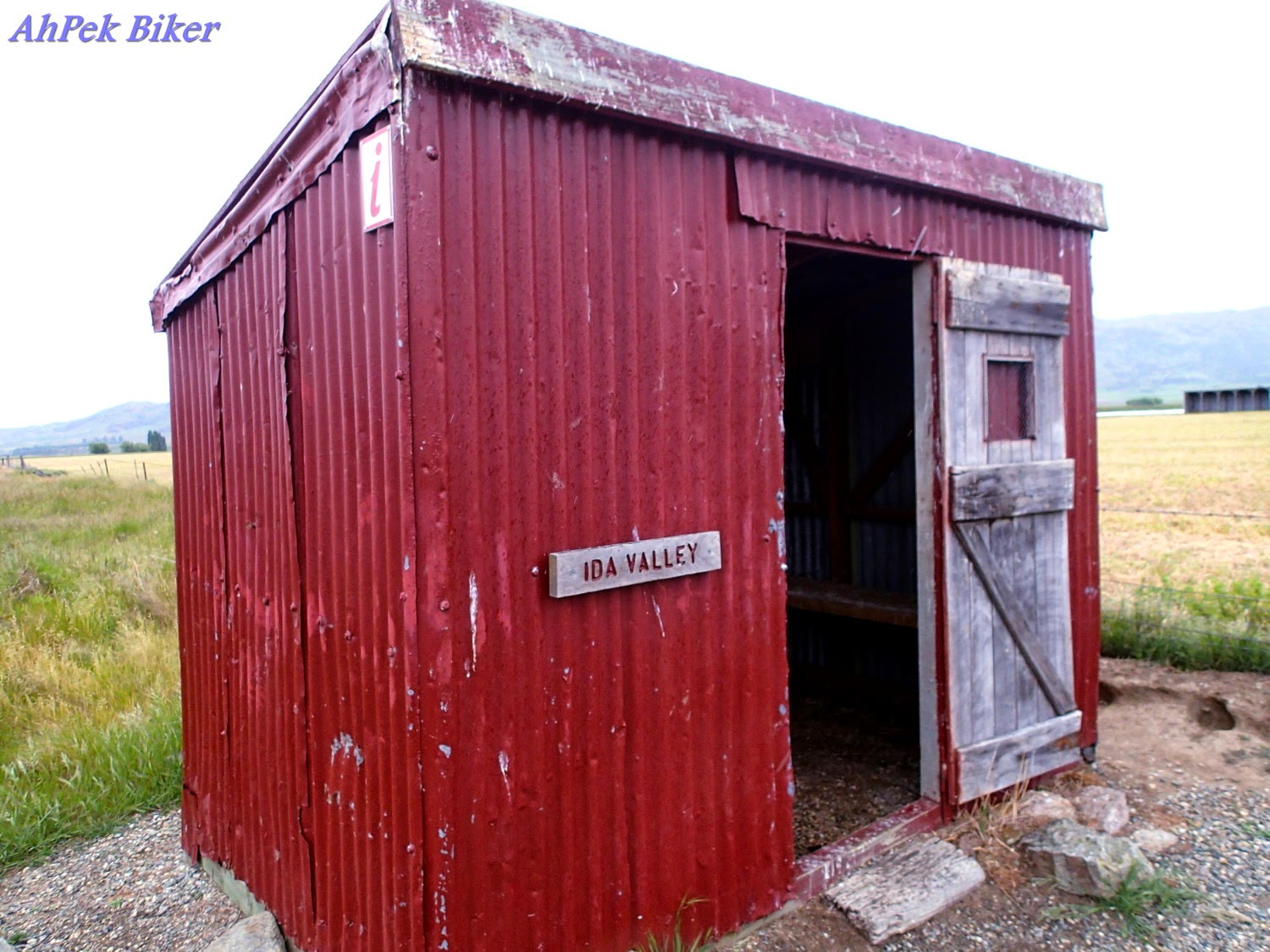 The drizzle got heavier, I got wetter and started shivering more. The slopes were become steeper; this with me shivering in the fluttering raincoat, and wet gravel track made cycling hard. My progress slowed down.
My buddies with their better raincoats continued on but I decided take shelter and wait out the rain in this small hut. Inside I found a hiker, Sebastian, who was also wet. 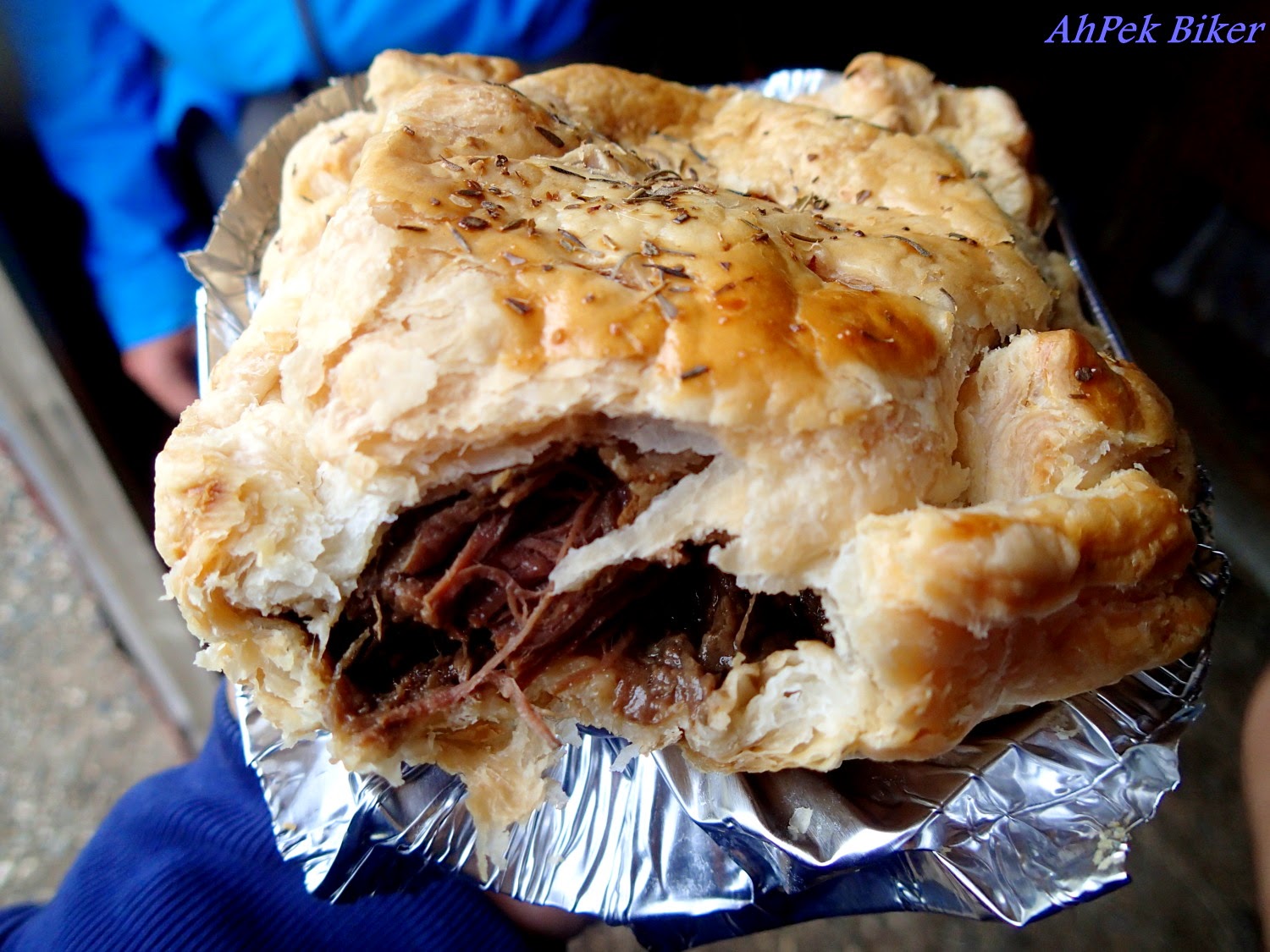 Inside the two of us struck up a conversation and I found out that Sebastian was from Germany, hiking his way around NZ.
It's 1:00pm now, so I might as well have my Muddy Creek pie lunch. I offered to share with Sebastian but he had his own lunch. After almost an hour the rain did not abate, so I might as well continue on. Sebastian likewise decided to continue on but instead decided to head out to the main roads to walk on; he had enough of the wet tracks. 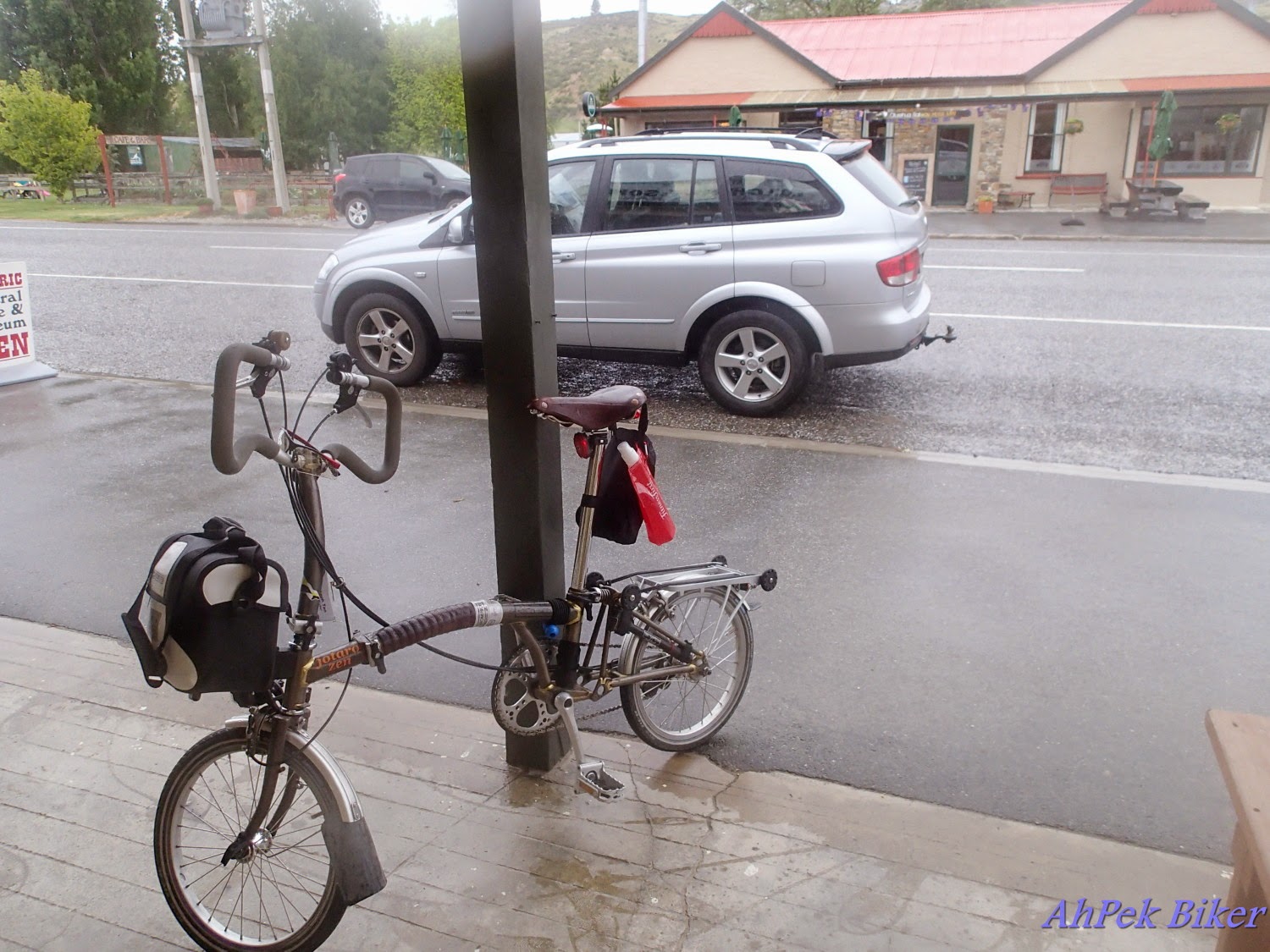 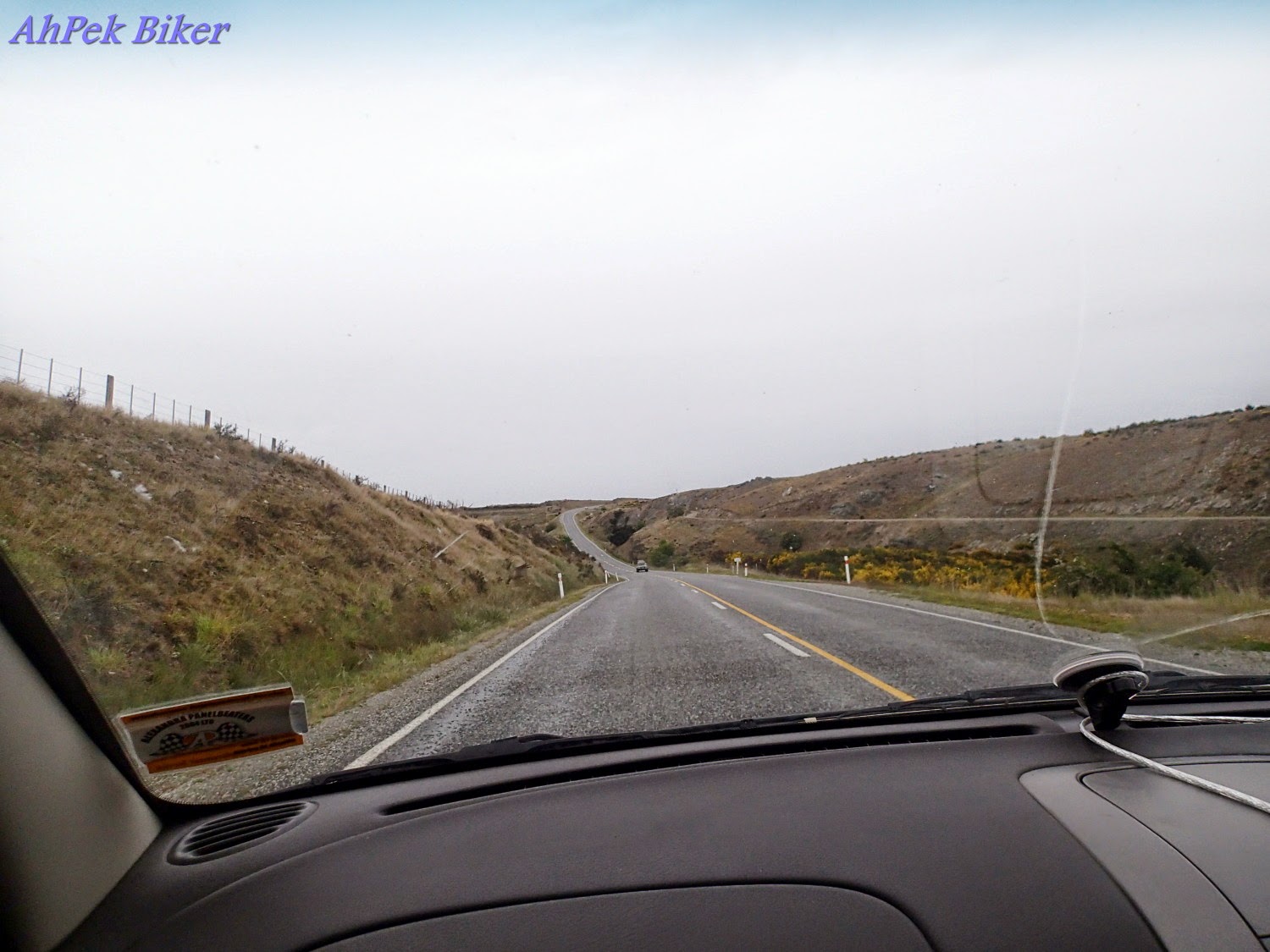 After cycling for half an hour along the Ida Valley Road and then making a right into Wedderburn Road I found it odd that I had not reached Wedderburn yet. I decided to make a stop and wait for a passing car to re-confirm my directions. Not many cars travel along these roads and it was another five minutes before I managed to stop a car.
The driver, Mack, was an angler from Dunedin who was on the way back from Milford Sound after a fishing trip. He mentioned that I was on the right road to Wedderburn, but somehow, probably because of the cloudy skies, his GPS could not tell how far away it was. I was running late and not wanting to keep my buddies waiting, I folded my Brompton bike loaded it into his pick-up and took a lift from him. 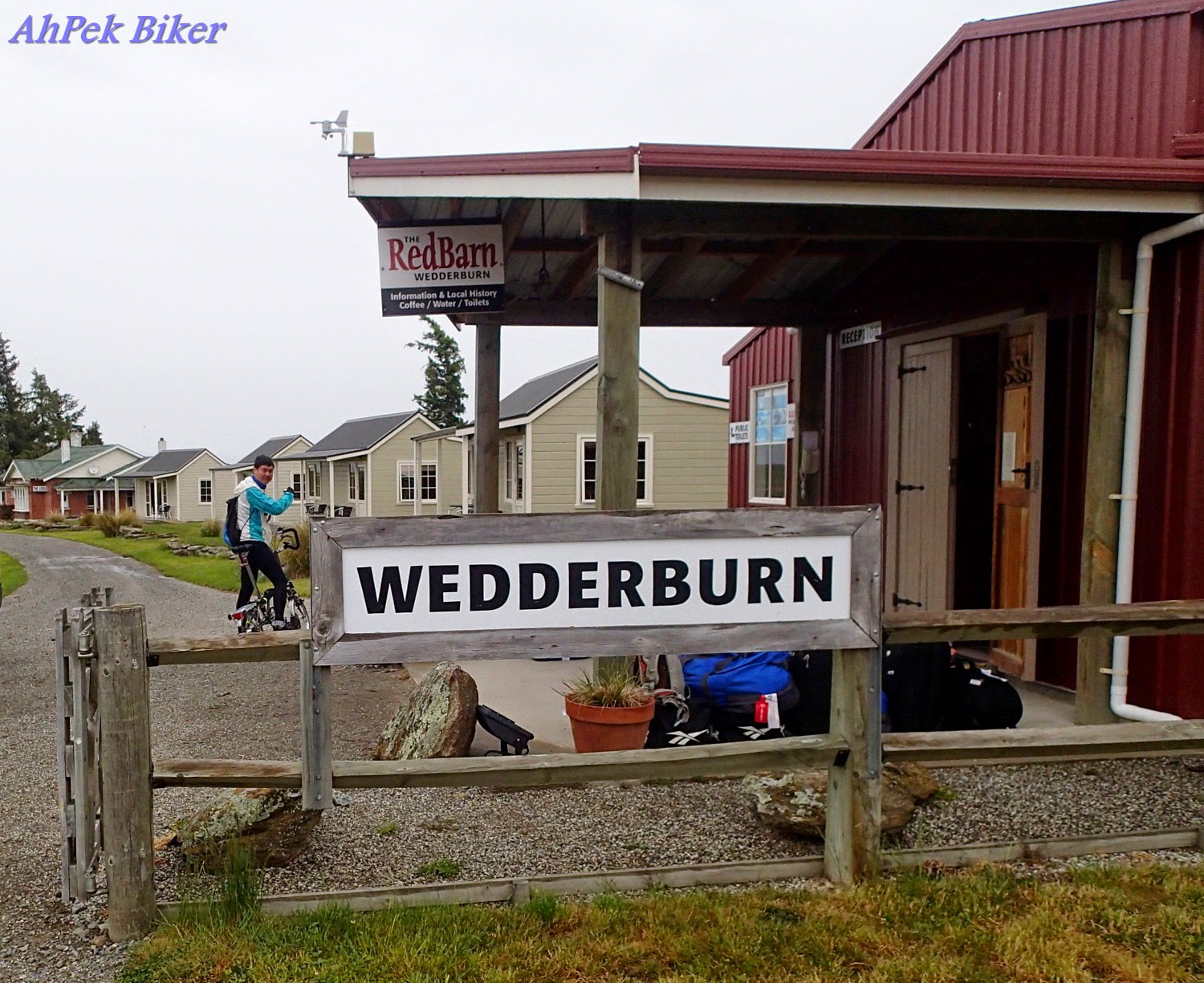 After only a ten minutes drive we reached Wedderburn and Mack dropped me at the roadside from where I cycled in to the Wedderburn Lodge and Cottages, our home-stay for the night. Hah! It was only a five mile drive; I should have continued cycling all the way!
As I cycled in, my buddies were a bit puzzled as they saw me coming but from an opposite direction. I was hesitant about what to tell them but in the end blurted out my story about cycling on the road and thumbing a lift.
"Oi! You cheated!" What could I say, back at Oturehua I was feeling desolate, miserable and wet.

We ended our ride early as Siew Yung had arranged a side-tour to St. Bathans; when we arrived John, the tour guide, was waiting for us with his van.
He drove us over to quaint St. Bathans town and then down to the Blue Lake nearby. The Blue Lake is not blue anymore, erosion had turned it greyish and it was not the scenic sight that it used to be.
Noting our disappointment with the lake, John took us to see Bob who runs a farm nearby and does a lot of planting at his "Cambrian Common Forests". Visitors are welcomed to wander around his farm. 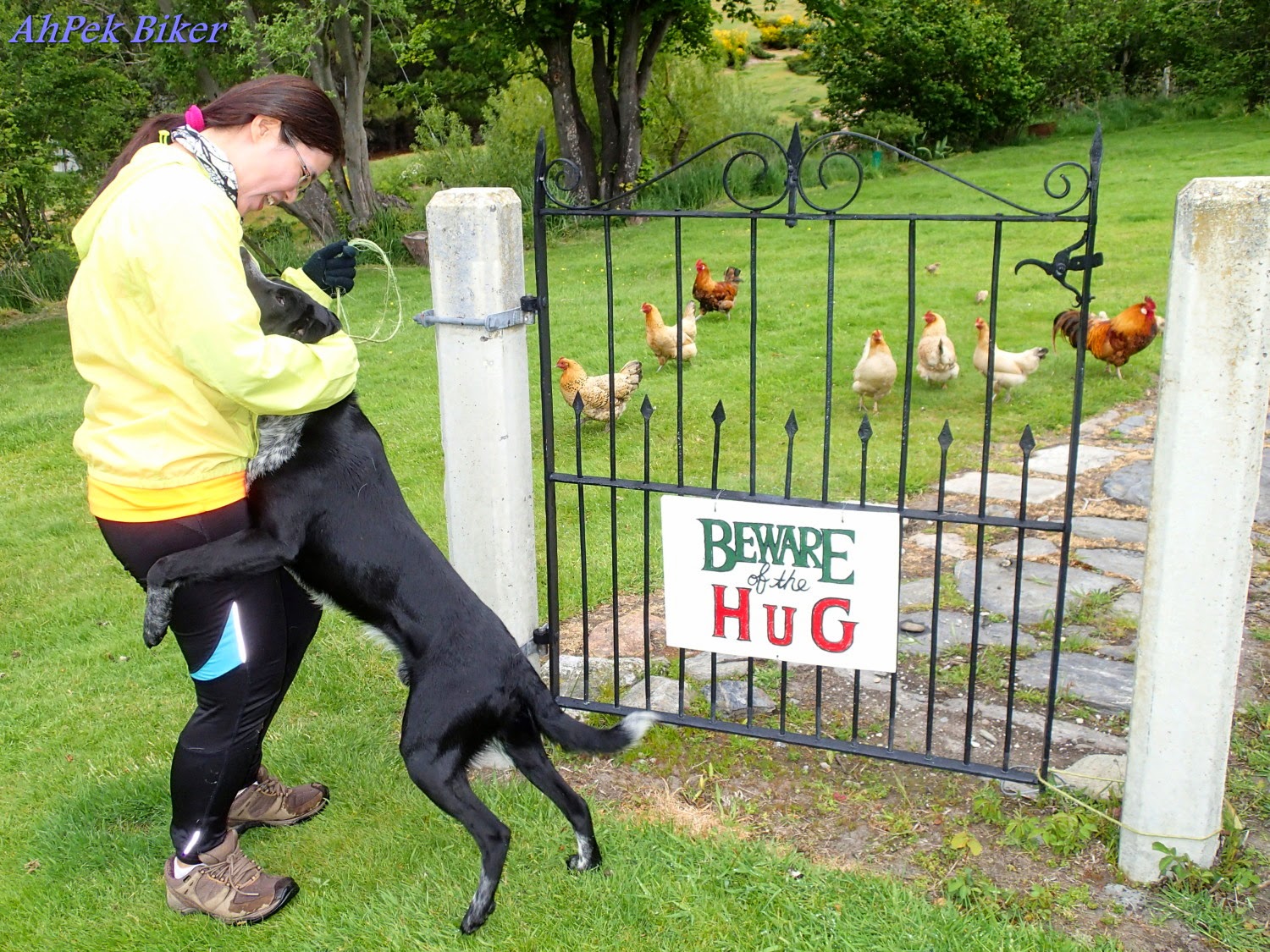 Bob was a hugger, he likes to hug people; so did his dog.
All this hugging lifted my spirit and shooed away my earlier despondent mood. 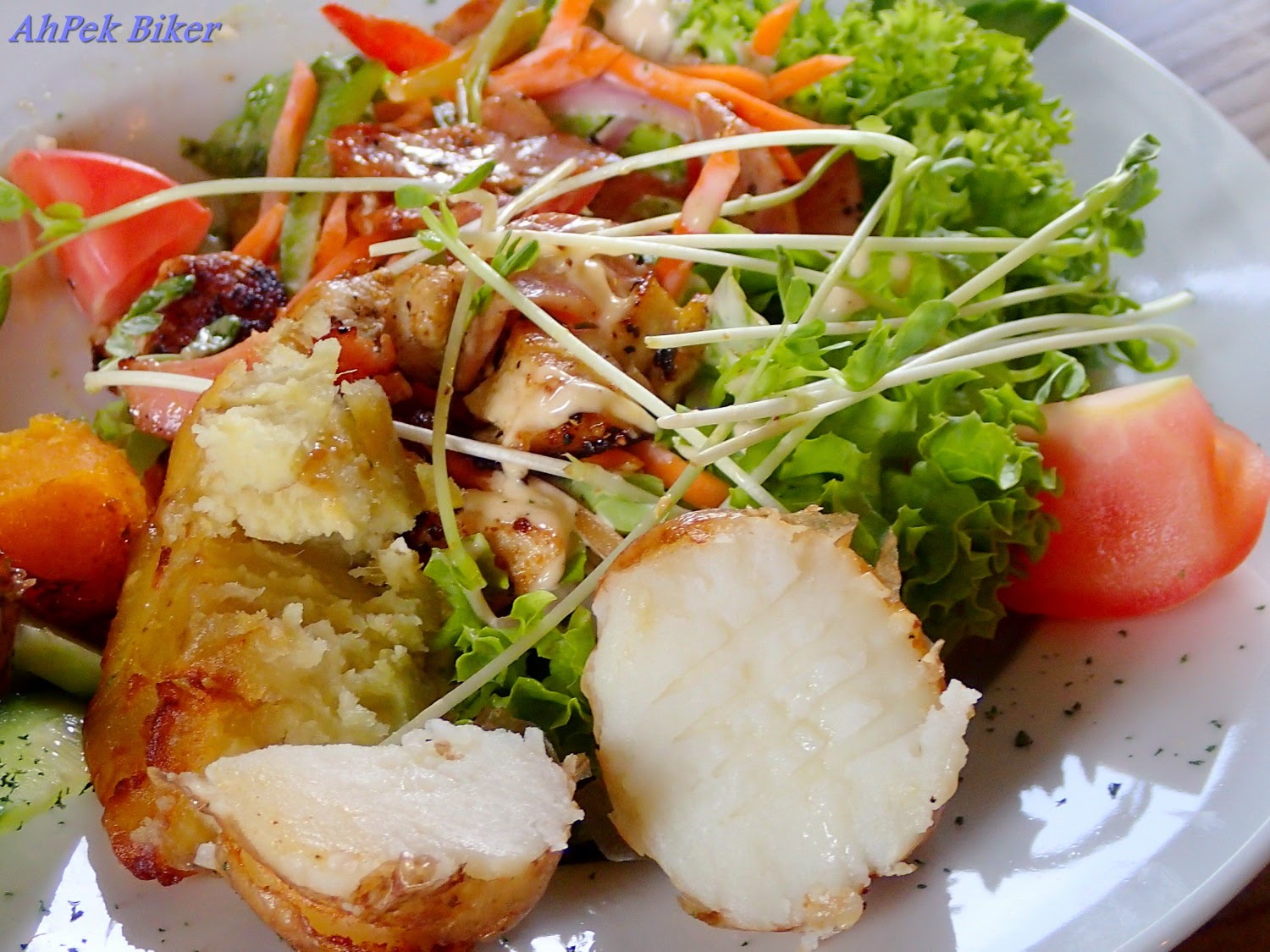 It had been a long, wet day, so we decided to take it easy and skip cooking ourselves.
Instead we walked to the nearby Wedderburn Tavern to have a nice dinner before calling it a day. Let's hope it won't be raining tomorrow! Keeping fingers crossed!