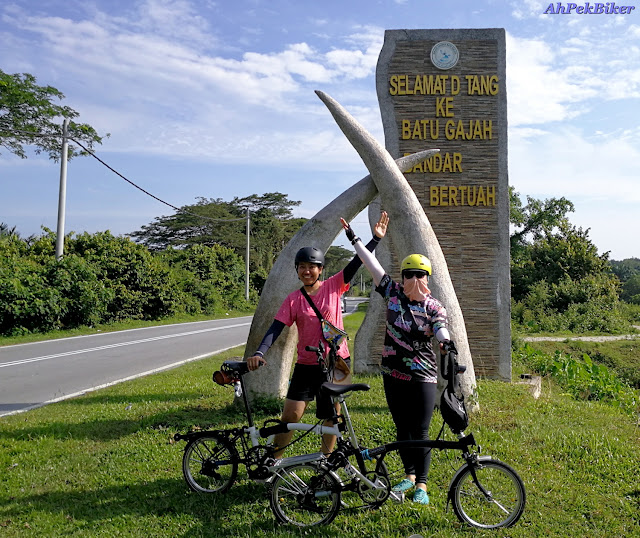 5. Accommodations
Two nights for a double/twin room at RM70 per night at a rented homestay in Taman Bandar Baru, Kampar.
PRELUDE 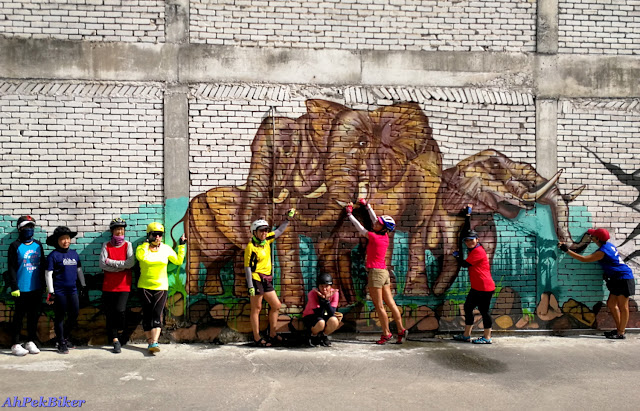 A day earlier we had done a loop from Gopeng to Batu Gajah & Pusing, and then had pusing (made a U-turn) back to Gopeng. Although I have rode in Batu Gajah before, but this ride was an eye-opener as we "discovered" Batu Gajah's colonial past, and later had a good Hakka lunch in Pusing.
Today we will have a shorter half-day ride to Tanjung Tualang before driving back to Kuala Lumpur. And they reason for going to Tanjung Tualang are there renown udang galah (giant fresh water prawns)!

Distance: 40.14 km.          |          Level: Medium
This is a loop that starts from Kampar and heads towards Tanjung Tualang using the rural roads, and then back to Kampar along wider main roads. The rural roads towards Tanjung Tualang are fairly shady but the return route did not have much shade. It's a very flat route as this is around former tin mining land (as evident by the many mining pools seen in the map above). 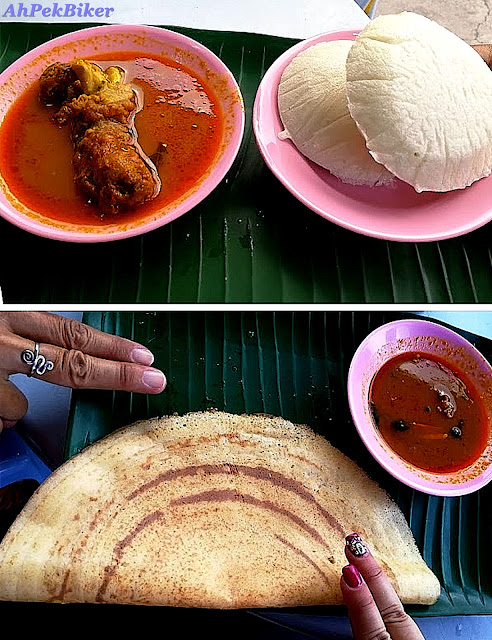 The day didn't start with a bang but with wet rain. Not wanting to waste time waiting for the rain to stop, instead of cycling out, we drove to the 18 Kopitiam for breakfast. While the rest of us had noodles, Larry & Winnie had delicious Idli (top photo) and Tosei that came with yummy curries. Idli is not often sold at stalls, so I can understand his excitement in eating this simple dish.They are a type of savory rice cake that are made by steaming a batter consisting of fermented black lentils (de-husked) and rice. The fermentation process breaks down the starches so that they are more readily metabolized by the body. 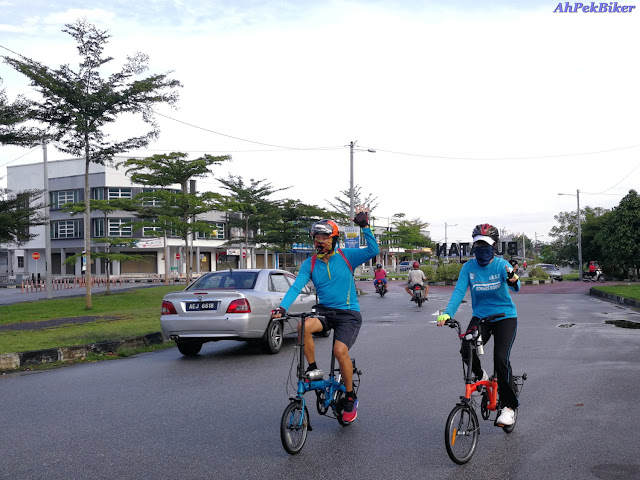 Fortunately, by the time we finished breakfast, the rain had stopped. We quickly drove back and hopped onto our bicycles to start the day's ride.
With our local buddy, Winston, leading the way, we rolled off. Here's PC and his daughter happily cycling together, somewhere ahead is the missus/mum - cycling as a family is good fun and knits the family even closer together. 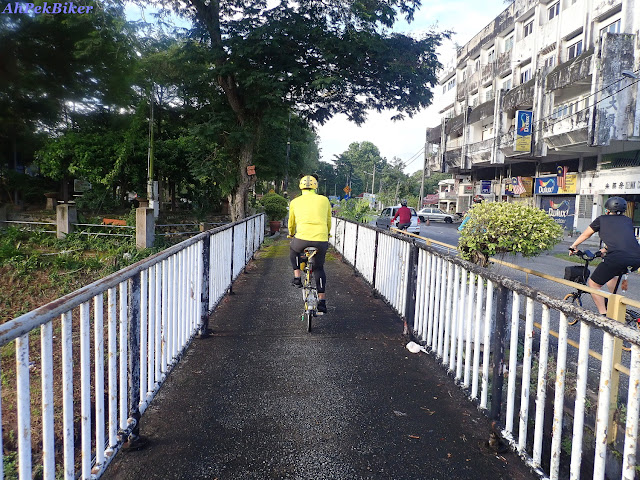 Winston took us on a route leading out of town that avoided the main road and went along the inner roads. One section went onto a cycling bridge just before the Japanese Garden (GPS: 4.30864, 101.15295). 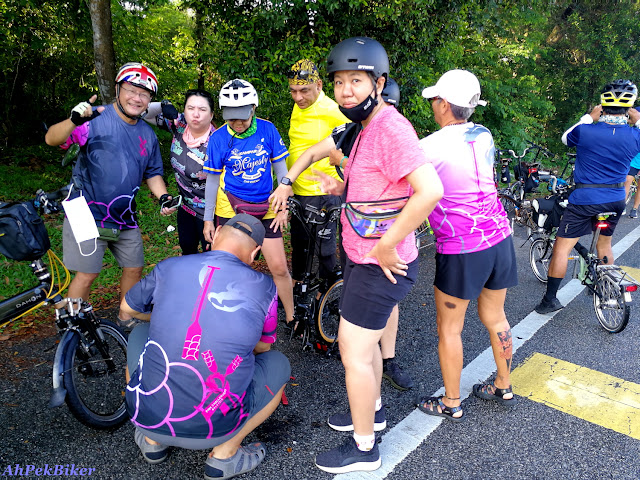 8:50am @ Kg Baharin Pinji - Riding pass the Kampar Railway Station, we exited onto Federal Route 1 but did not ride on the busy road itself as we would be turning right into Federal Route 70, the Kampar to Changkat Jong road, just slightly further down. Instead we rode on the wide five-foot way.
Just after we turned into Route 70, the first of Joel's puncture occurred. While Andrew was repairing the puncture, the rest of us just lolled around and chit-chatted. It was a good breather stop. Later Joel & her bike would keep us entertained a few more times🤣. 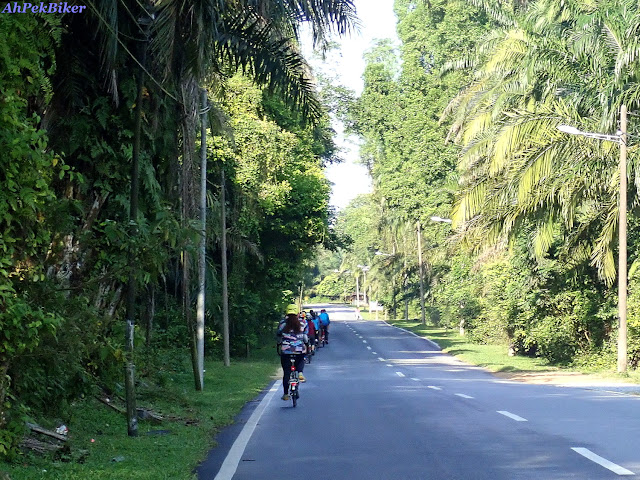 Further along, at Taman Indah, we made another right into Perak State Route A180 that would take us pass many small villages. It's interesting to note that state roads start with an alphabet similar to the state's motor registration alpahbet. For Perak it's "A", Selangor it's "B", Kedah it's "K", etc.
Anyway Route A180, with tall trees that made it shady was a pleasure to cycle along. AND we were not the only one enjoying riding here. Suddenly a peloton of 50 or so road bikes went zooming passed us; not sure whether they are from Kampar or from Ipoh (which was more likely). 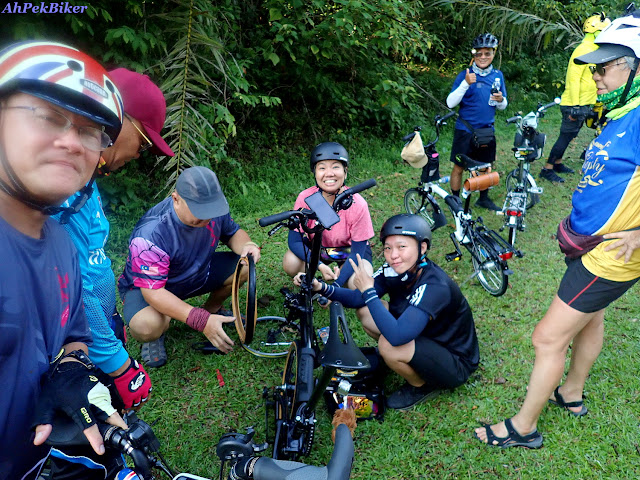 9:10am @ Bukit Pekan - Aiks! Not even half-an-hour later, another puncture for Joel! It's another round of chit-chat. Even with this second puncture we were all smiling and happy, that's the good thing about cycling, the camaraderie that keeps us together and looking out for each other. 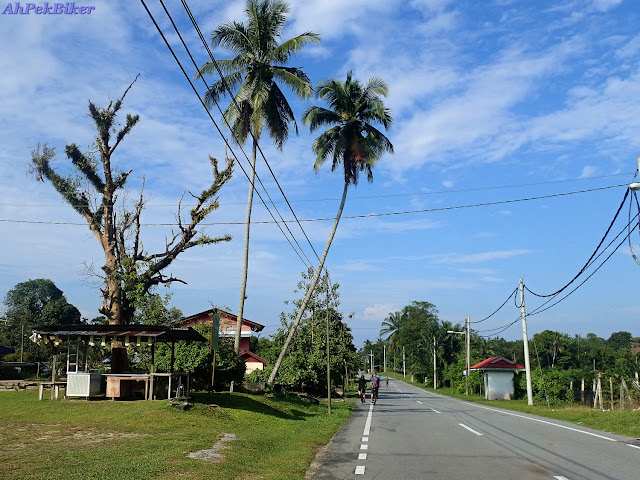 The shady roads slowly gave way open roads, it's slightly hotter now but the the picturesque route more than made up for it. 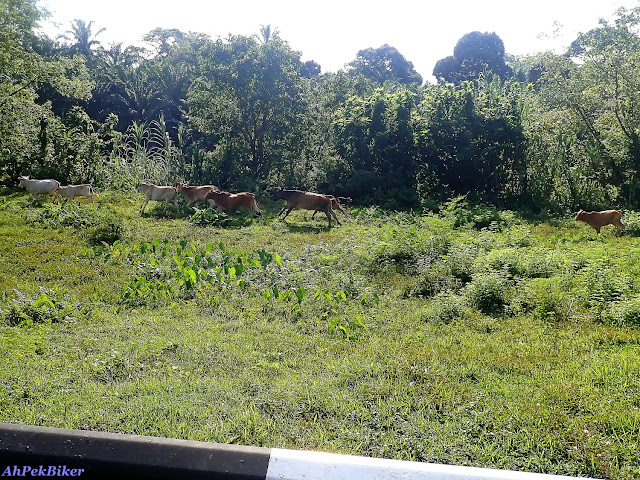 Somewhere after Tronoh Mines and just before the bridge over the Kinta River - suddenly, a herd of cows started stampeding at the brush-land on our right. Something must have frightened them, hopefully it's not a tiger. It was fortunate that they were not "stampeding" on the road we were riding on!
Their furious running reminded me of another time while cycling along rural roads from Phnom Penh to Oudong we ran headlong into a herd of rushing cows. 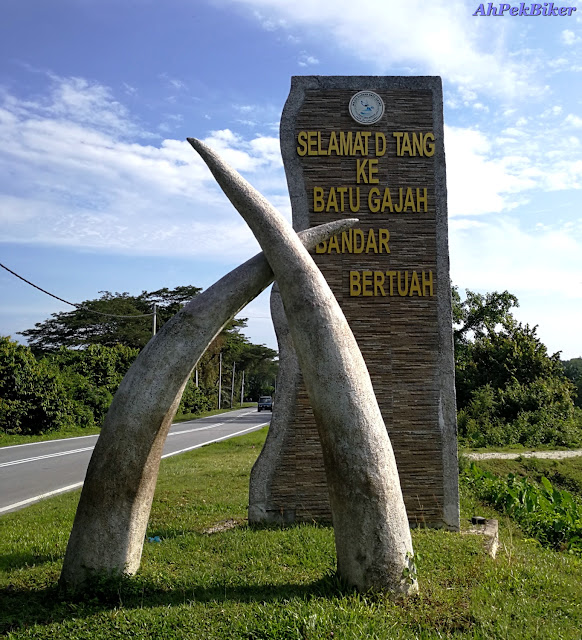 A little ahead was this sculpture of two en-crossed giant elephant tusks welcoming visitors to Batu Gajah (the town's name means Elephant Stone in Bahasa Malaysia). The rest had cycled further ahead, and only a few of us were bringing up the rear; despite this a couple of the girls decided to stop for photos (see top-most photo), it was too meaningful a place not to stop. 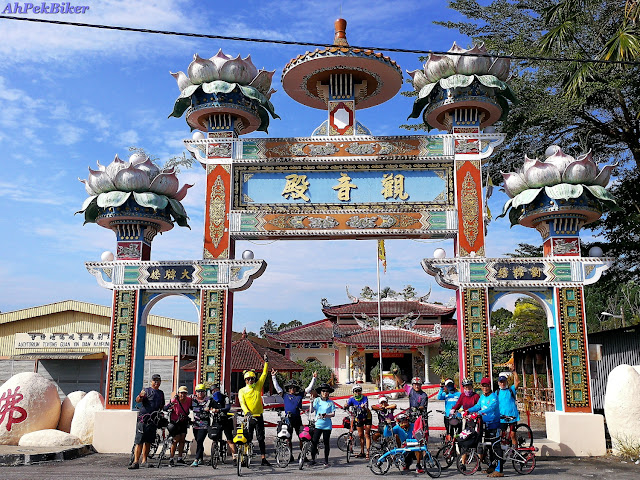 10:00am - Reaching Kg. Baharu Timah, we made a quick stop for photos in front of the Guanyin Temple there. I am intrigued by its entrance archway with four giant lotus atop, and would never fail to stop here for photos. 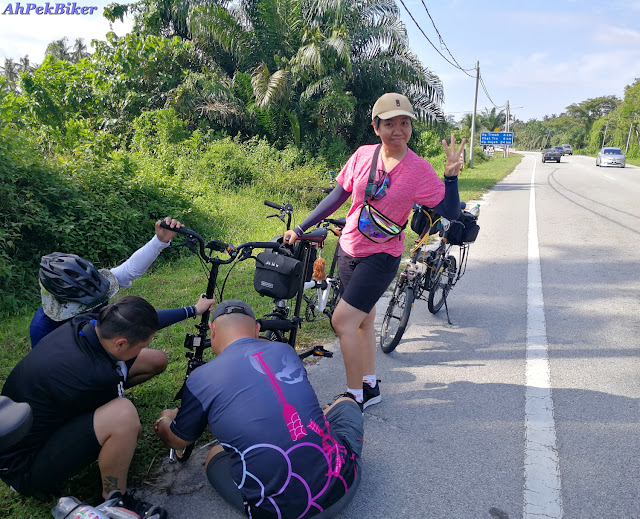 10:25am @ Kg Ayer Papan - Ouch! Another puncture for Joel's bicycle. It's a record three puncture within 1-1/2 hours! And Lamb holding up three fingers signifying three times lucky.
This time Andrew finally managed to locate the cause: a small hole in the tire had let fine sand into the tire, and some of these sharp and hard fine sand were the cause! His simple solution to prevent further punctures was to insert a dollar note over the hole.
Anyway, many thanks to Joel. Her three punctures will make this ride memorable!


10:50am - We arrived at My Prawn Village where were supposed to have lunch, but the restaurant here is still closed since the Covid-19 lock down. But withing its large compound there were many other things to admire (Note: the place re-opened for business two weeks after our visit).
One of which was a working scaled model of a tin dredge, the boss, Alex Wong, kindly turned it on for us to see. (video credits: Jeremy Phun)

There were also scaled replicas of famous buildings such as Kellie's Castle and the Ipoh Railway Station (above).

And also old antique cars from the early twentieth century. 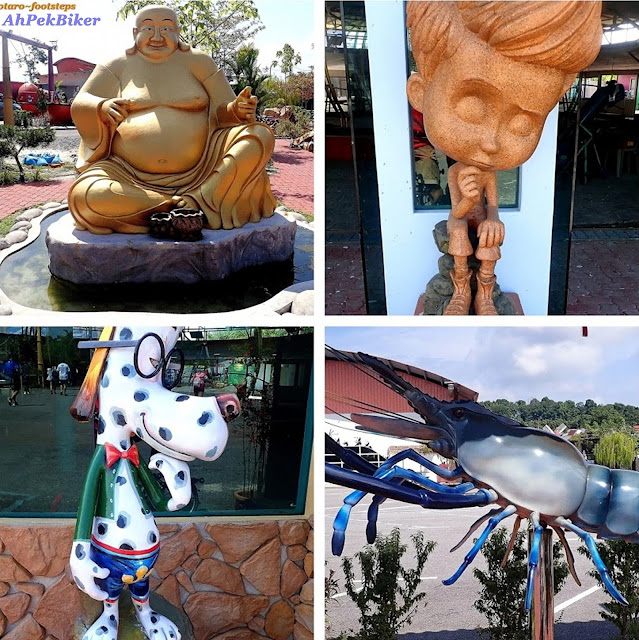 Dotting the grounds were statues such as Budai, the Laughing Buddha, and a giant statue of a Giant Fresh Water Prawns (Udang Galah).. 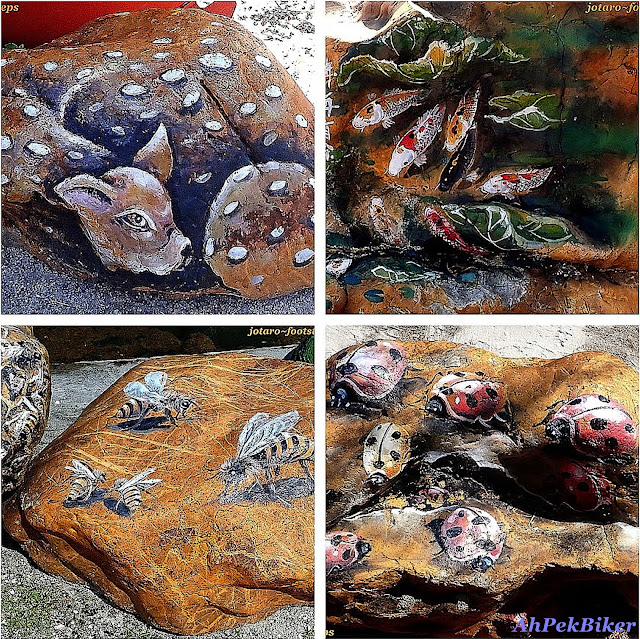 Interesting were paintings of animals drawn onto brown, rounded river stones, seen above, clockwise from top-left: a spotted deer, Koi fishes in a pond, lady bugs and honey bees. 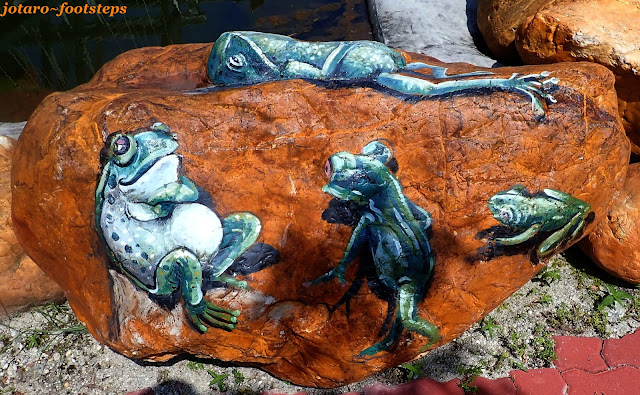 The most well-done was a family of frogs, with the reclining frog fitting into the profile of the rock very well.

Snow White & the Seven Dwarfs, and Donald Duck and friends were having fun on a couple of restored orange life-boats. 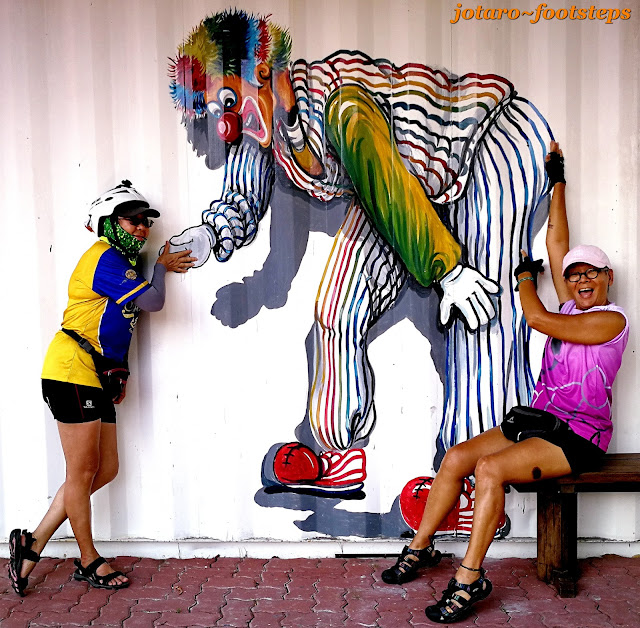 And the girls having fun with a wall mural of a colourful clown! 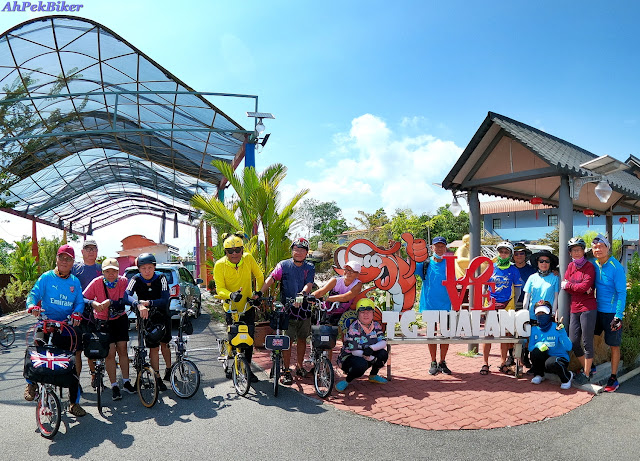 One group photo for the album before we reluctant pull away from this interesting place to head for lunch .....
(..... read more of My Prawn Village) 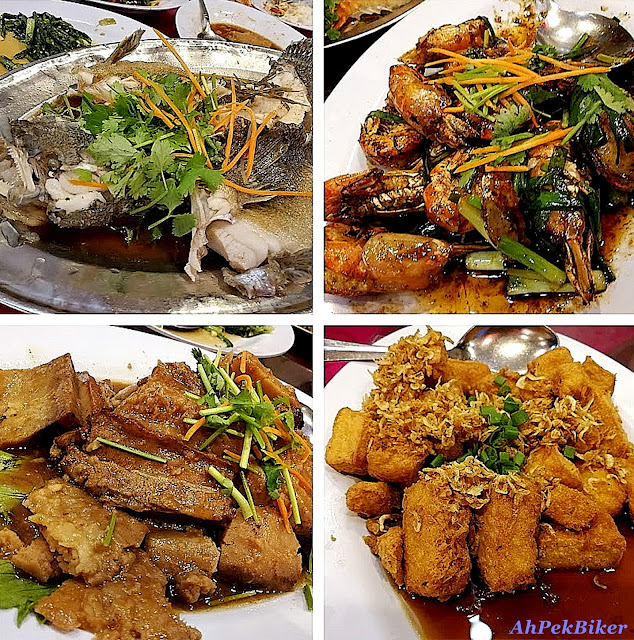 .... which was at Restoran Makanan Laut Thong Lok. This place serves wonderful dishes of the ones we had included (clockwise from top-left above):
1. Very fresh steamed fish served with light soy sauce,
2. Udang Galah seasoned with Lea & Perrins Worcestershire sauce sauce and stir-fried in a hot wok till the shells were crispy and caramelised, and yet the flesh were still succulent,
3. Deep-fried soft tofu, served with crispy mini prawns,
4. Hokkien-style Kow Yoke served with yam. 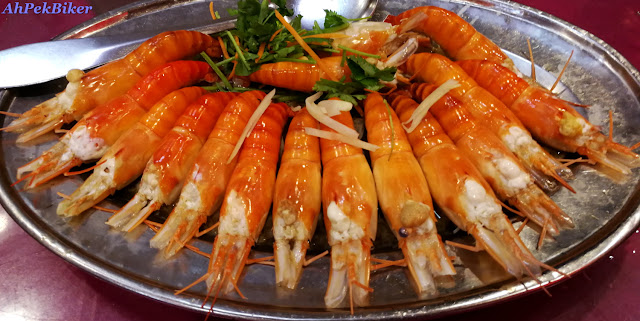 .... and their creme de la creme, these medium-sized Udang Galah steamed with a dash of Chinese white wine. 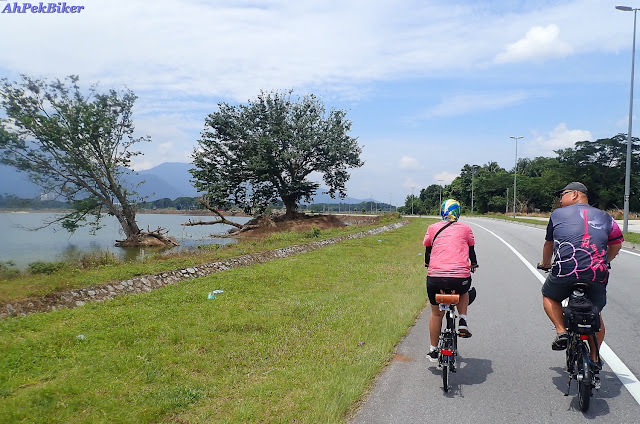 Appetite more than sated, we rode back to Kampar on hotter un-shaded roads; but I didn't mind as it was a shorter 12 km. route suited my very full tummy very well 😂. 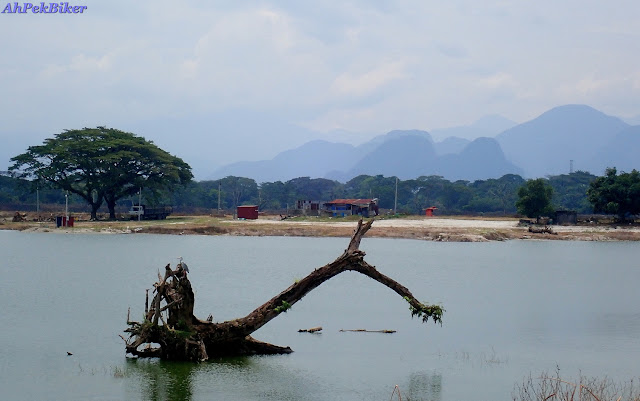 The route may be hot, but it held scenic views like the one above, one of a lonely tree trunk in a mining pool with misty hills in the background. 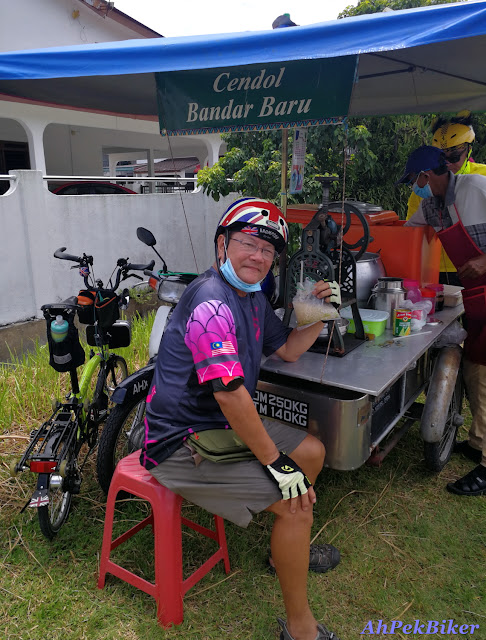 One last eats before finishing the ride; cendol for desserts..... yes, seems like we did not have desserts during lunch 😋. 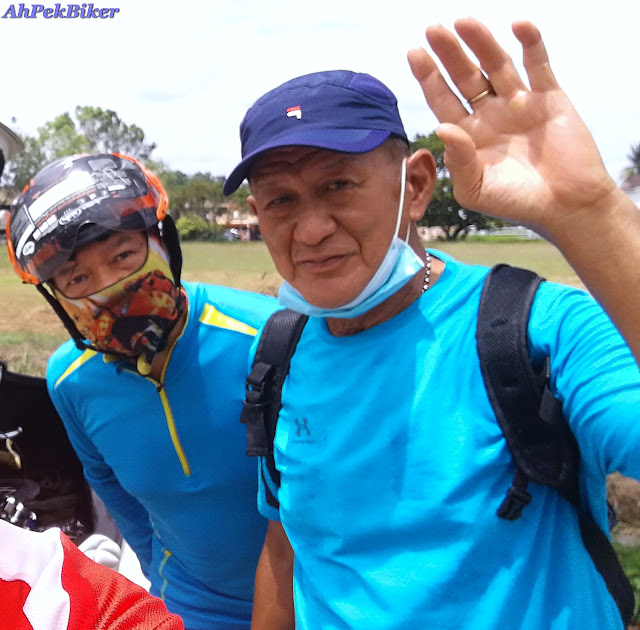 Many thanks, Winston, for taking us on a interesting half-day ride. 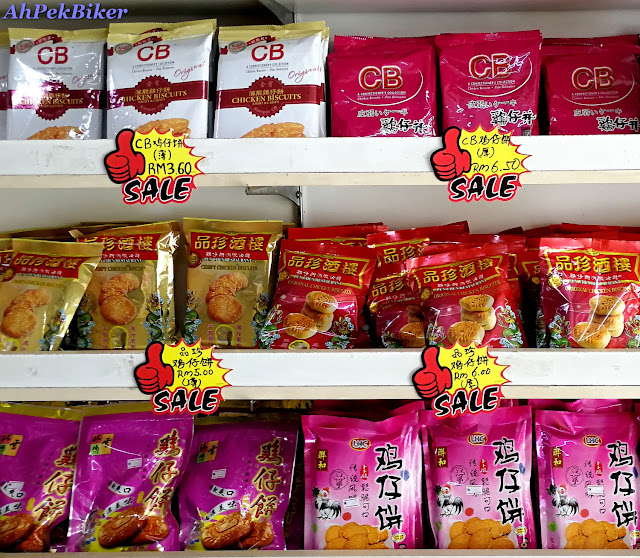 One can't leave Kampar without buying some of their local specialties for love ones back home; on our drive back, we swung over to the nearby Kampar Old Town Local Products shop and got these renown Kampar Chicken Biscuits. 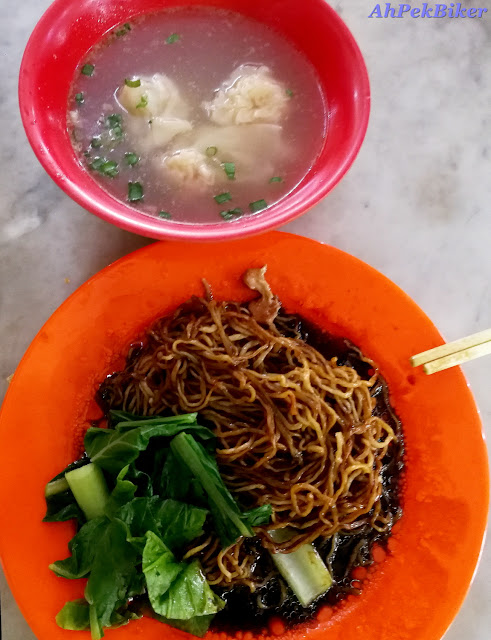 Enroute we stopped Pun Chun Restaurant in Bidor, for a late lunch of their renown Wantan noodles and Wu Kok (Crispy Yam Puff). 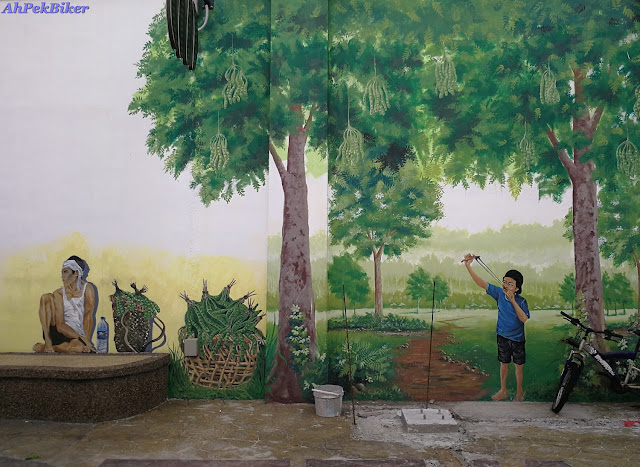 Bidor now has a new tourist attraction called Petai Lane, it's a lane next to Pun Chun where open stalls have been put up for vendors to sell petai (stink beans). Over these past decades, more and more vendors have been selling these beans at the roadside five-foot way. Now they have proper stalls to sell from.
Petai has long been used in folk medicine to treat diabetes, hypertension, and kidney problems. It has earned its nickname 'stink bean' because its strong smell is very pervasive and lingers in the mouth and body. It contains certain amino acids that give a strong smell to one's urine, an effect that can be noticed up to two days after consumption. They can also cause strong-smelling rectal gas. We used to say that if one's urine not have the petai odor after consumption, then there could something wrong with the kidneys; don't think that's true anyway.

Click here for a Relive bird's eye view of the ride from Kampar to Tanjung Tualang..
(For more photos of the Day 2 Ride, click here)

You are at - Jotaro's Blog / AhPek Biker / Cycling Malaysia / Perak / Kampar 2020 / Day 2 - Cycling Kampar To Tanjung Tualang     |     Go to Day 1
If you like this, view my other blogs at Jotaro's Blog
(comments most welcomed below. if you like this pls share via facebook or twitter)
Posted by Jotaro Zen at 3:37 AM No comments: