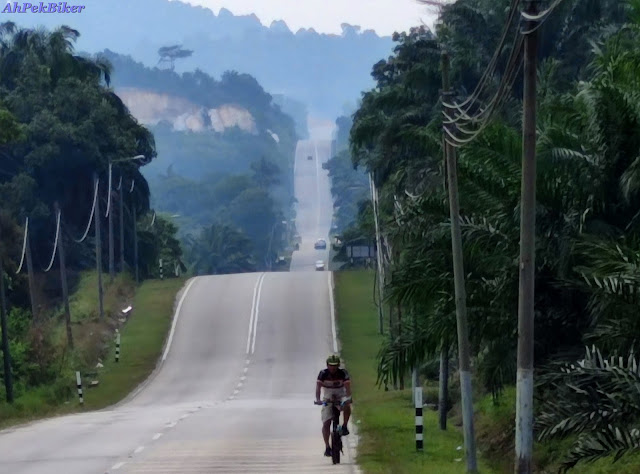 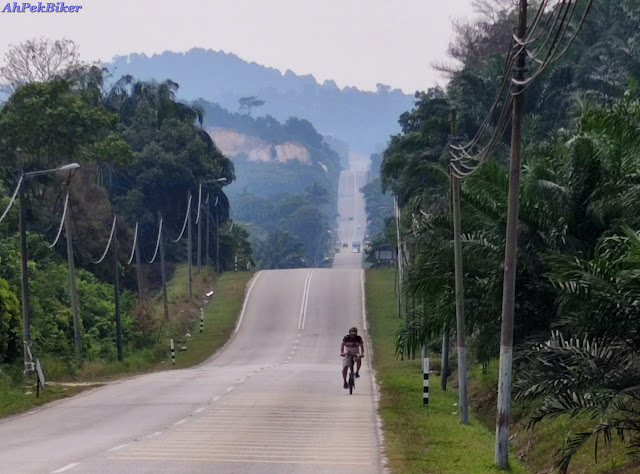 DRAGON SLAYERS!!
That's part of the fun in cycling, taking on undulating rolling hills known as dragon-backs as they resembles the hump spine of a dragon. Conquering them gives a sense of self-satisfaction and often exhilaration too!
Some could be long ones like those we faced during a ride to Taman Negara, or those from Cameron Highlands to Raub. Others are just short but steep ones like the one en-route to the Tip of Borneo (we will come to these later).
But the most daunting ones I faced are the short but scary ones at Bukit Cherakah in Selangor! 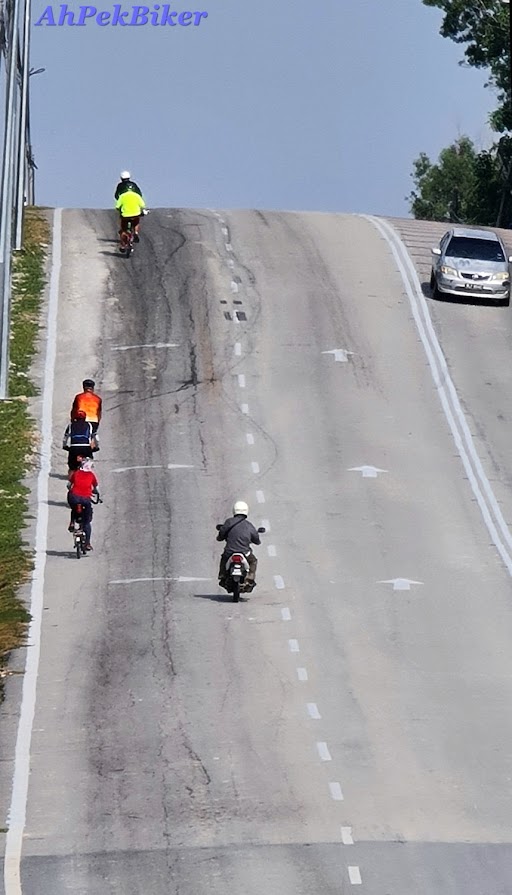 The Bukit Cherakah Dragonbacks are so notorious that one can actually geo-tag them in both Google Maps & Facebook. They span only six kilometres; but right from the start the view of the first climb was already daunting!
The first climb is as steep as most of the rest; but it's the scariest. It starts from a flat road just after the Jalan Paip junciton. There is no down-slope ride to gain momentum for the up-slope ride. One look at it would have most veterans "shitting in their pants" and it took some effort to surmount it! 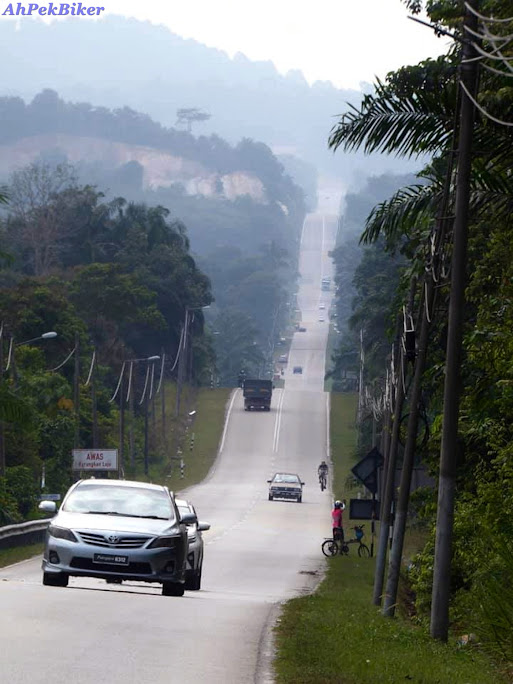 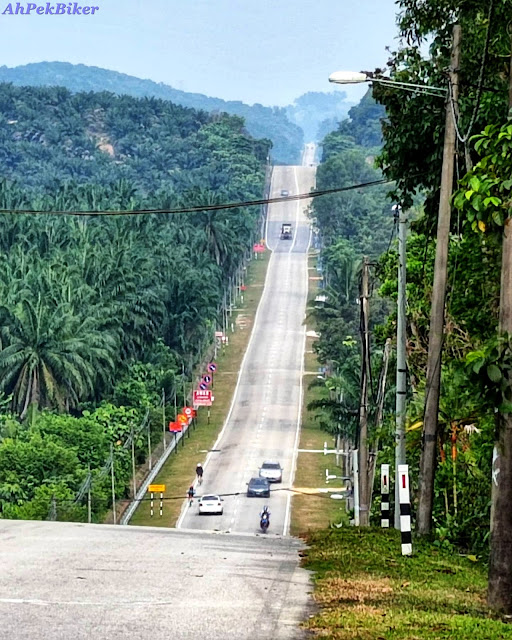 Don't be fooled though, the rest of the dragon-backs are as steep as the first, the only saving grace is that one can go whooshing down the slope to gain momentum and get up the next slope more easily. Did I say more easily? Hah! The momentum helped, but it was still an effort to climb all the way to the top! 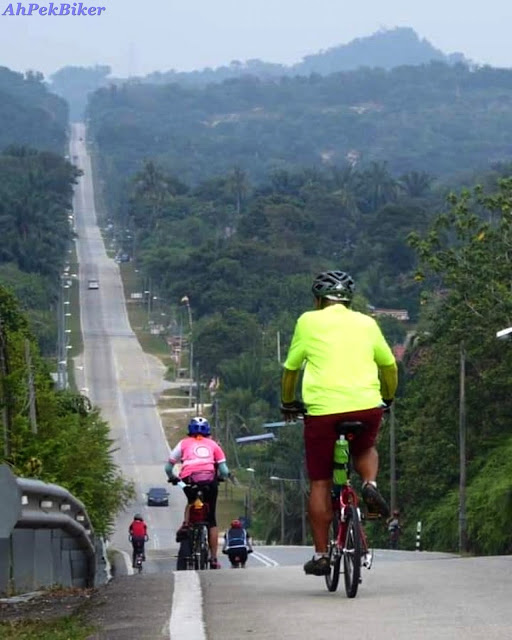 Do whoosh down with care though, the down slopes are as steep as the up-slopes .....
..... and does look as SCARY! 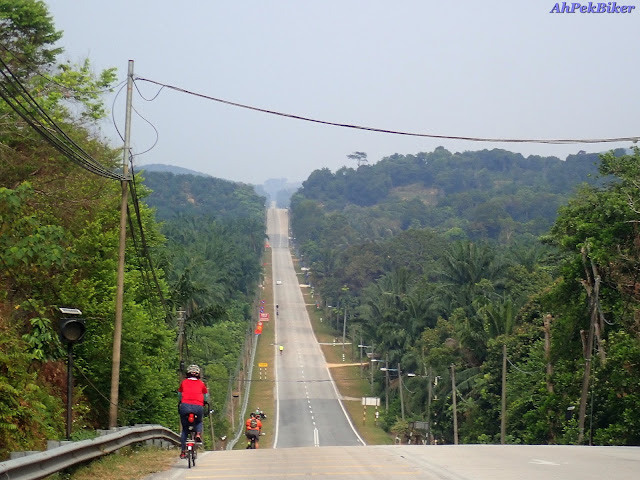 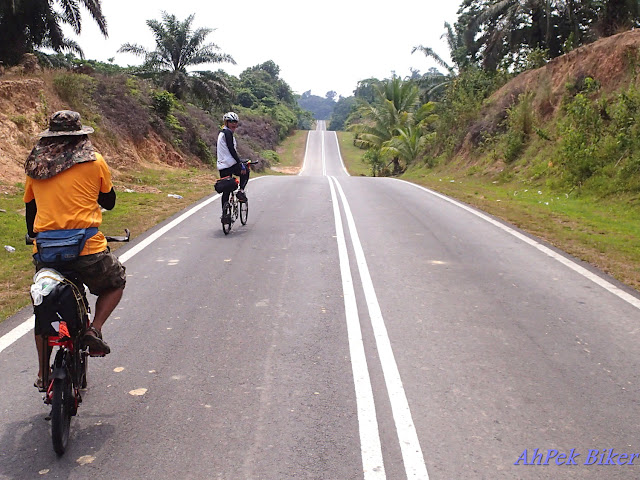 One of the earliest dragons-backs we challenged, or rather that challenged us was the route during a ride to Taman Negara in 2014. The 60km ride from Kuala Tembeling to Kuala Tahan was a challenge to many of us who were then cycling newbies. It turned out quite torturous as then the road along Route C163 was fairly new with hardly an habitation, yup no villages big or small! AND hardly any shade too, as it ran up and down and up & down over dragon-backs for two thirds of the route, passing by plantation after plantation of oil palms. Somehow we endured and added a pip to our cycling achievements.
We were to do the same route again in 2017, now with houses and villages along the way, the route was more shady and seem much easier.
(Click here for the ride blog)
(Click here for this ride route map) 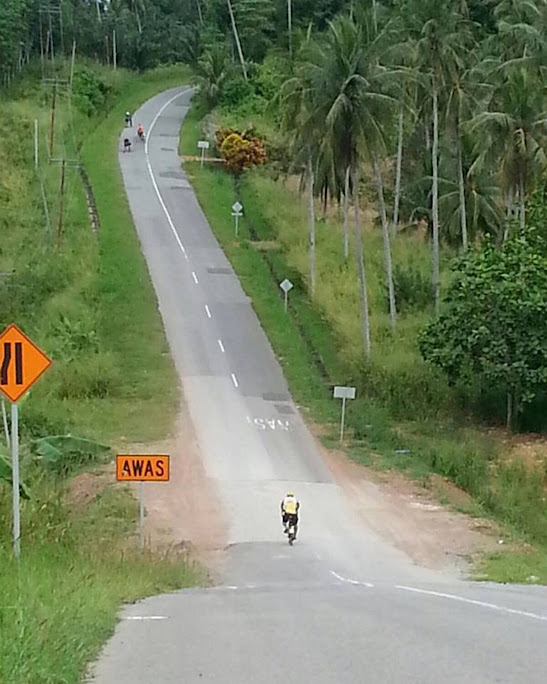 Fast forward to end-2015 and across the South China Sea to Sabah, the Land Below the Wind. On a ride to the Tip of Borneo, just before reaching the Tip, a short series of dragon-backs starting with this scary super steep slope as seen in the above photo. Yes there was a down-slope before, but a gravely patch at the bottom prevented us from zooming up from the bottom.
(Click here for the ride blog)
(Click here for this ride route map) 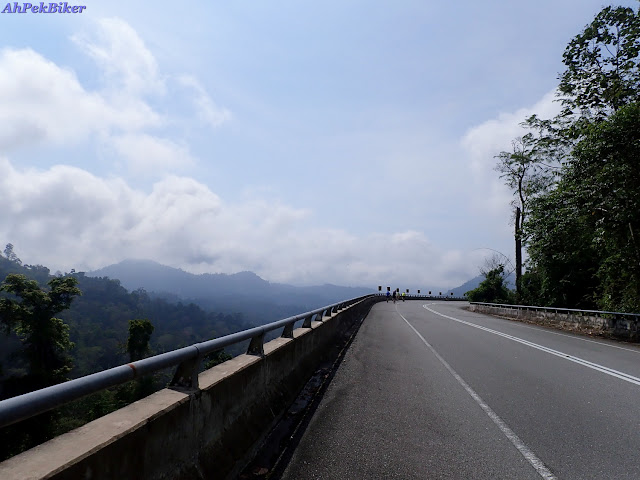 Another fierce dragon we took on was from Cameron Highlands to Cheroh (near Raub). This was a hidden dragon as one would have logically thought that this 130 km. route with an elevation drop of 1,700 metres, would be down hill all the way.
But we were sadly wrong and fooled into complacency by the pleasant down hill coasting from Tanah Rata to Ringlet, with scenic views of the tea plantations. It's after the Cameron Dam that the fun begins!
Yes, it's a "downhill" ride but one that's with a total of 90 km. of continuous dragon-backs up till Sungai Koyan (before continuing another 30 km. to Cheroh). This route along  Federal Route 102 ran along oil-palm plantations with hardly any shade. There was no where to hide from the unmerciful hot sun even when stopping for rest - I would suggest bringing an umbrella along 😂. To add salt to the pain, the road here is un-inhabited AND the only place for water topping up is at a small rest stop called Pos Betau, so bring along more water!
(Click here for the ride blog)
(Click here for this ride route map)
___________________________________________________________________________________
ROUTE BONUSES
Cycling Route: Elmina Kilometre Zero>Elmina Valley - Central Park>Elmina Orange Bridge>Elmina Central Park>Elmina Rainbow Bridge>Saujana Utama>Bukit Cherakah Dragon-backs>Nirvana Hill>Eco Grandeur>Elmina Kilometre Zero.
Cycling Distance: 50 km.     Level: Hard
This is a 50km route that starts for KM 0 at Elmina East to head for the challenging Bukit Cherakah Dragonbacks. Along the ways are several places of interest before the dragon-backs, after which it heads to Nirvana Hill and Eco Grandeur before looping back. It's a route with several climbs but with rewarding views of the places of interest.
(Click here for Google Route Map Link)
(Click here for Google Streetview of the Dragonbacks) 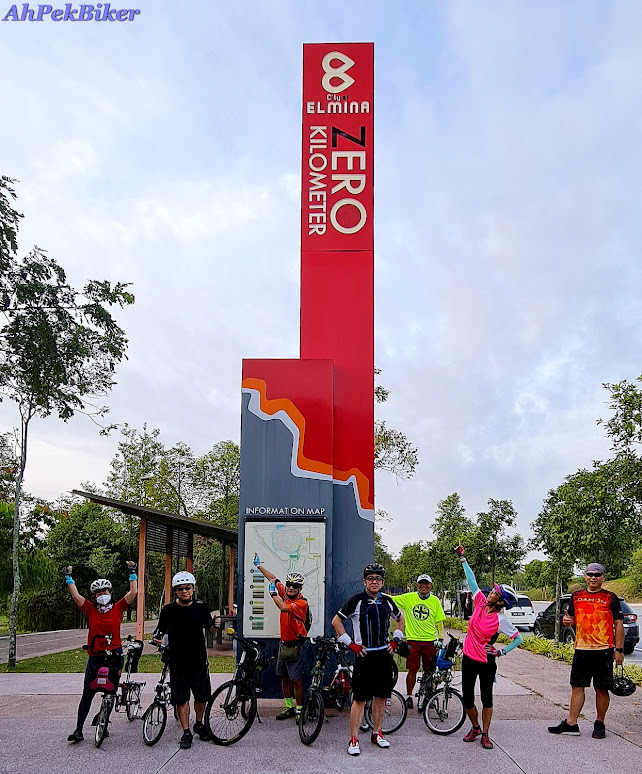 The dragon-backs were challenging and exhilarating. But to add extras to the route, ride leader Mindy took us on a route beyond the dragon-backs and onwards to Eco Grandeur. Along the way were several bonus places, that are both beautiful and memorable.
A good place to meet and kick-off the ride is at Elmina Kilometre Zero (GPS: 3.18816, 101.52219), with it's tall and noticeable sign-board, it's sure not to be missed. Also nearby are several shops that are opened for breakfast.
The following places are shown in sequential order along the route, refer to the ride map for orientation: 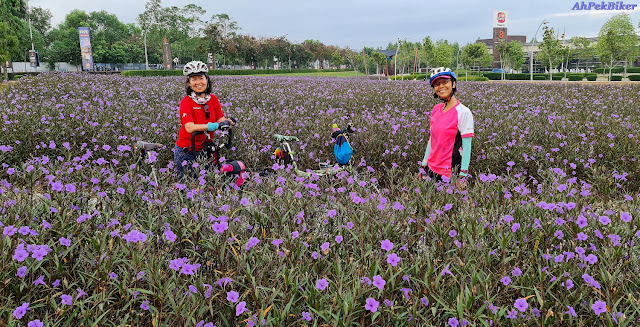 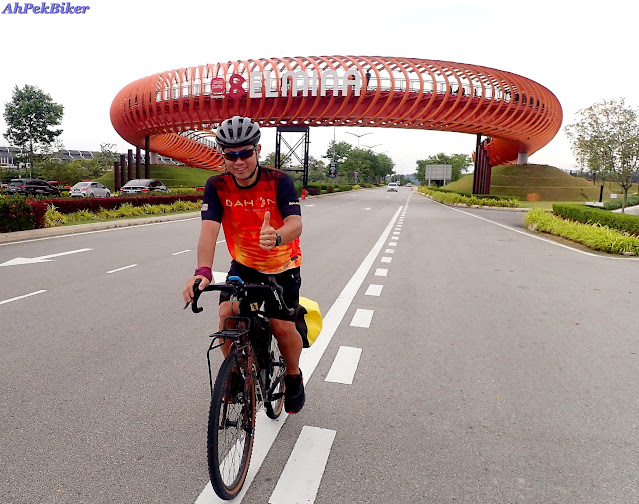 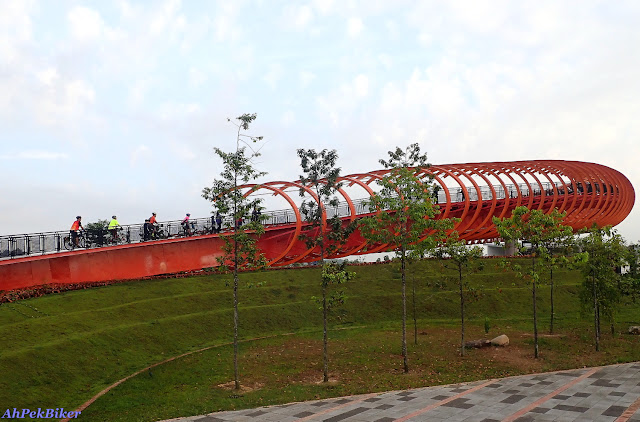 This striking structure is actually a bridge that connects the Elmina Valley - Central Park (GPS: 3.17922, 101.51581) to upcoming developments on the other side of the highway.

And panoramic views from the bridge itself. 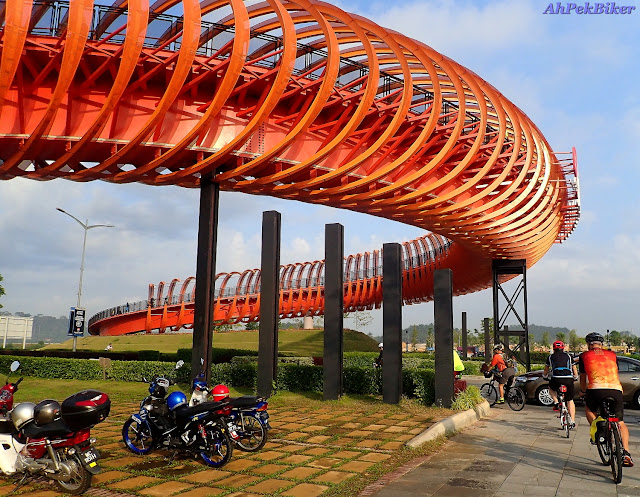 Striking as it is; time to say goodbye to the Iconic Elmina Bridge City of Elmina. 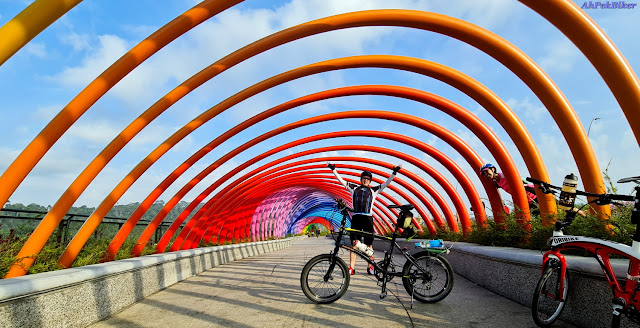 ..... as not to far away is the Elmina Valley Rainbow Bridge (GPS: 3.17571, 101.50497).
These structure that runs on both side of the highway span over a river, and are very noticeable with rainbow colored roof structures. 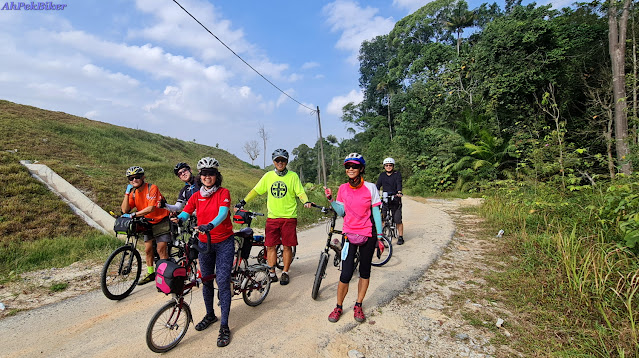 Just before the Bukit Cherakah Dragonbacks, off Jalan Paip, a road leads to the Tasik Subang Dam (GPS: 3.16671, 101.47963). Being a water collection area, the dam is a restricted area and we could only cycle up to the entrance gate/guardhouse. But the interesting thing is that Google Maps shows a place called Altantuya Park (GPS: 3.16475, 101.47893), which makes one wonder whether it has anything to do with the Altantuya affair.
Earthworks is ongoing for future development in this area and soon the road leading in will be covered up and replaced by new ones. 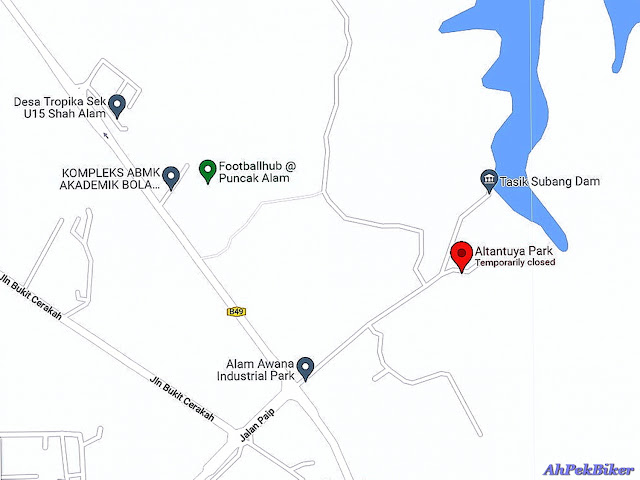 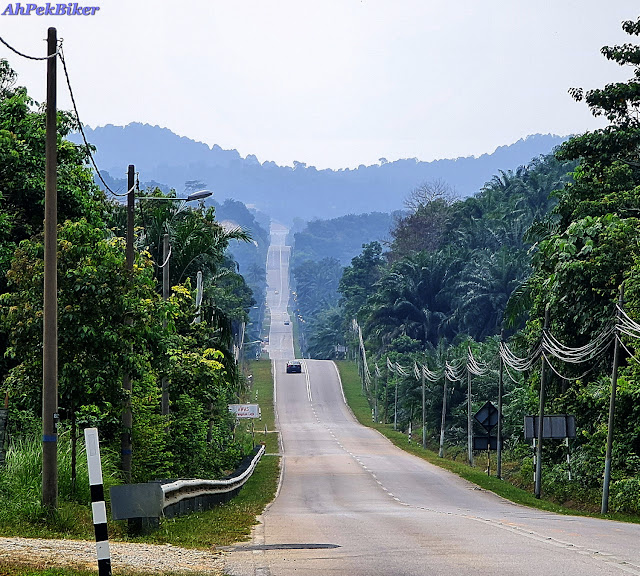 Opposite the park, the Dragonbacks of Bukit Cherakah starts just after the junction of Jalan Bukit Cerakah and Jalan Paip, and continues on for a grueling six kilometres. 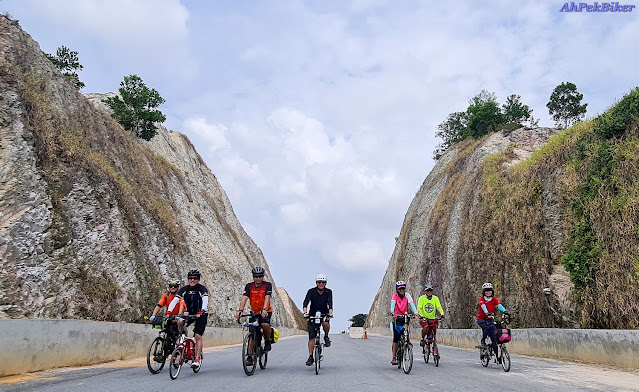 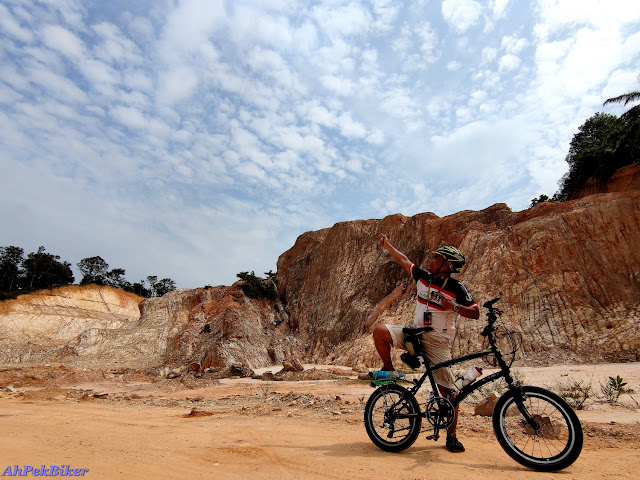 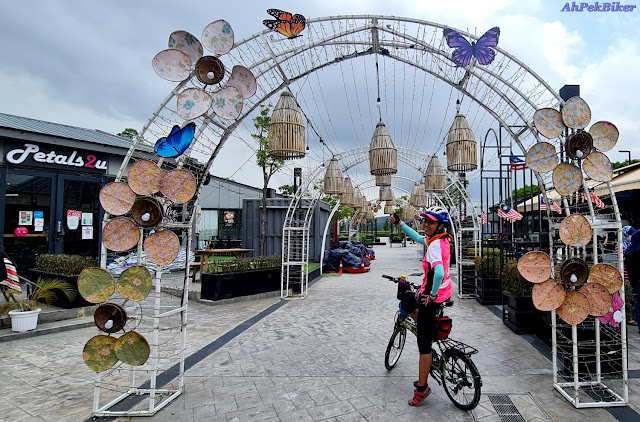 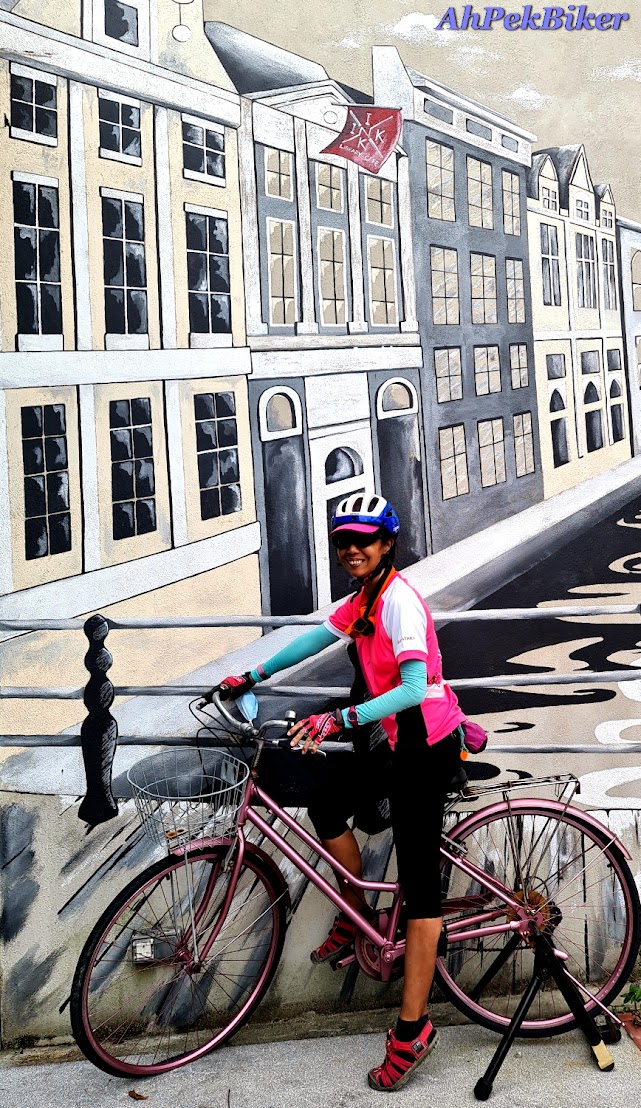 Near the INK Library Cafe, murals of a canal like those in Amsterdam. 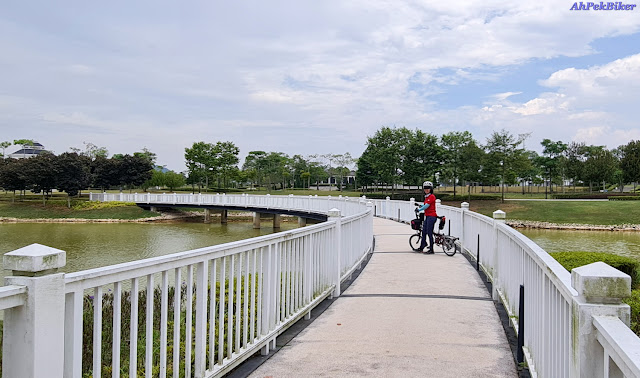 That grand entrance lures one into interesting walkways/bike-ways, that meanders through a green Dragonfly Park along the Eco Grandeur Lakeside Path and onto a curved bridge spanning over a small lake ....

.... and into tunnels running under the Bridge of Dreams!
Hah! From dragon-backs to dragonfly parks; how appropriate!
This is a relatively "young" park and is already quite green; give it a couple of more years and the greenery will be even more lush and attractive!


You are at - Jotaro's Blog / AhPek Biker / Cycling Malaysia / Selangor / The Dragonbacks of Bukit Cherakah
If you like this, view my other blogs at Jotaro's Blog
(comments most welcomed below. if you like this pls share via facebook or twitter)
Posted by Jotaro Zen at 9:15 AM No comments: