Route Recommendations :
1. For those from right-hand drive countries, take note that the Prague is left-hand drive. Do keep right when you ride otherwise you will be cycling on the wrong side.
2. The route covers both the Old Town & Lesser Quarter of Prague and slightly beyond; as such gives a good varied view of the city.
3. This is, to some aspect, an off-the-beaten track route, some of the destinations are not those that tourists frequent.
4. Don't miss the view point up at a hill in Letna Park.

PRELUDE
Whenever I go somewhere new, I try to do some cycling there. This time round we were on a holiday with friends. But my friends were not avid cyclists... and my legs were itching for a ride. We were three days into Prague when I finally found some time to do a little bit of cycling there. Finally, a chance to scratch that itch; but I had only a few hours to spare before getting back to the gang, and thus I had to weigh my options. 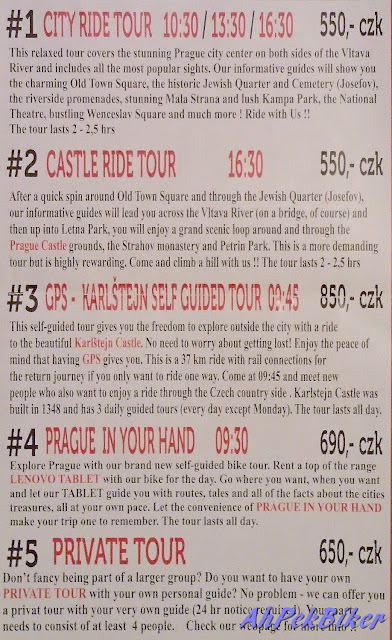 I could rent a bike and wander around on my own... OR I could join a cycling tour. So what shall I do? Having had a walking tour that explored much of Prague 1 and the Castle District (i.e. the Old Town & Lesser Quarter) the previous day; why not go further to the other Pragues, i.e. 2 to 5? So that morning I popped over to City Bike who operated bike tours and ran through the programmes that they offered.
Hmmm..... program #2 - the Castle Ride Tour, going to some parks, etc. seems okay; and I made an appointment for that afternoon!
But then again, as usual, something cropped up and the bike tour was not as expected... it turned out to be better!

Ride route - Old Town Square>Letna Park>Pissing Fountain>Narrowest Street>John Lennon Wall>Yellow Penguins>Dancing House>Yacht Club CERE>Kafka Rotating Head>Old Town Square.
The original route was suppose to cover part of Old Town and then cross over to the grounds around Prague Castle and continue on to the Strahov Monastery & Petrin Park. But we did not do that route... read on and see why. 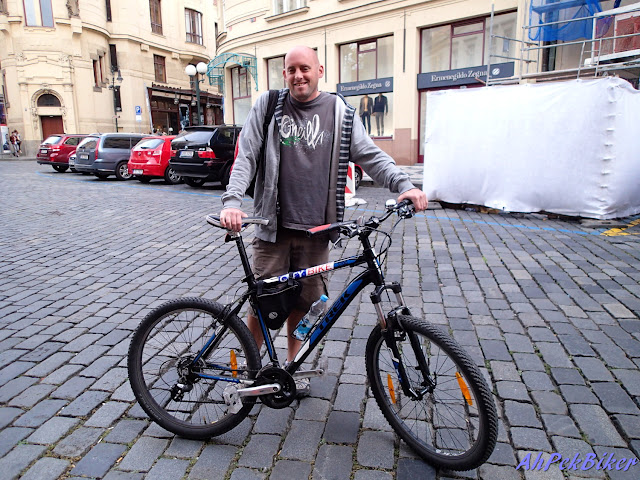 4:15pm - When I arrived at City Bike, two other tourist who were supposed to turn up did not. But the management were sporting about it and even though I was the only rider they would still proceed. So lucky me, I ended going on a private tour.
Alex was my guide; hailing from Britain, he had come to Prague two over years ago, liked it and decided to stay on. As we rode out, I mentioned to Alex that since it's going to be a one-to-one tour, I wouldn't mind detracting from their normal route. He asked me where I wanted to cycle, and I answered anywhere off the beaten track. All smiles, that was what he did, took me on a route that made me happy, and him happy too... see Alex loves to cycle too! 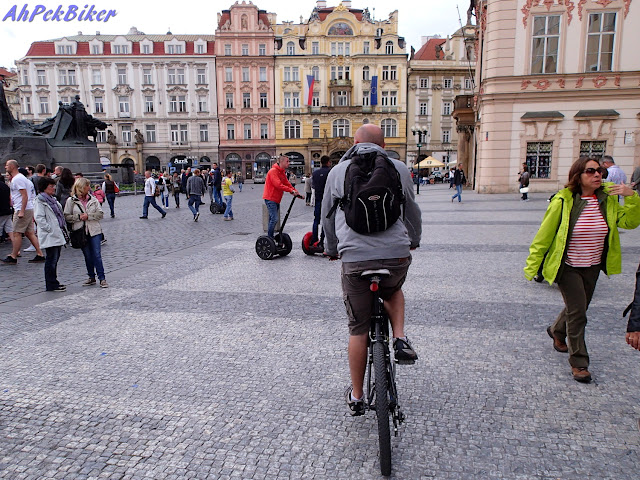 With that he took off, leading me to the nearby Old Town Square, where there were beautiful Bohemian style buildings and the renown Church of Our Lady Before Tyn (see the top most photo). Right at the centre is the Old Town Hall (shown in the second photo). 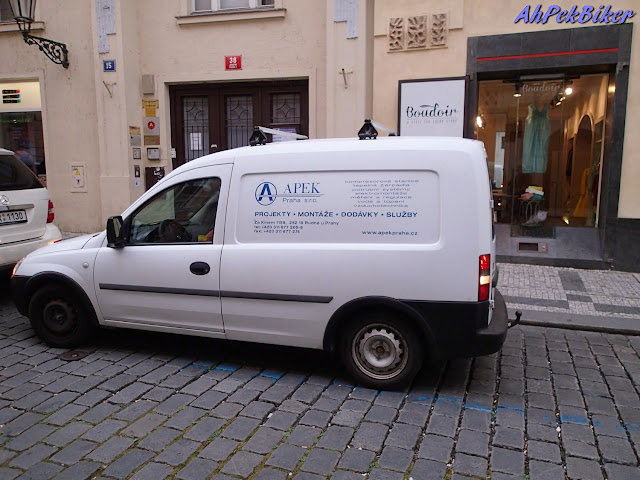 Could not resist making a quick U-turn to take a photo of this. Hah! Did not realized that I owned a company in the Czech Republic! 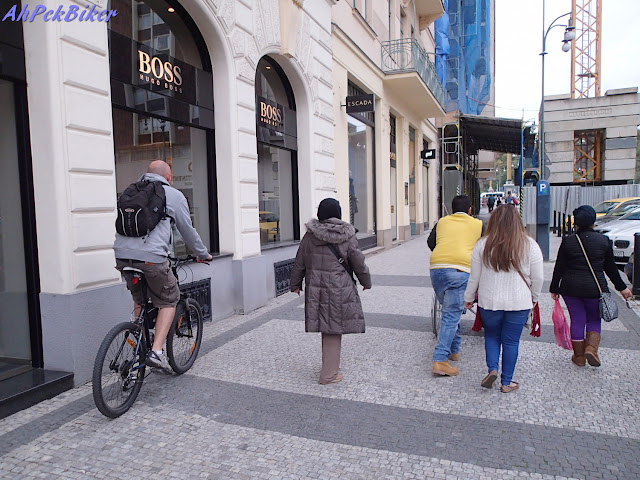 At the Old Town area, when there were cycling lanes we cycled there. When there were none and we had to ride against traffic, we went up the wide pavements. 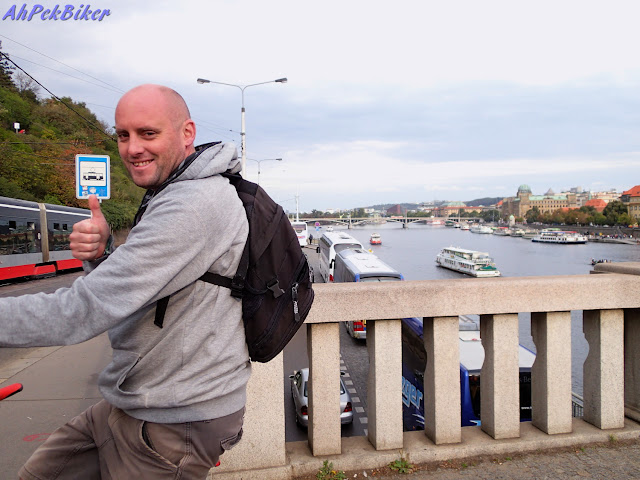 Crossing the Chekov Bridge over the Vltava River, we crossed from the old town over to the Lesser Quarter ..... 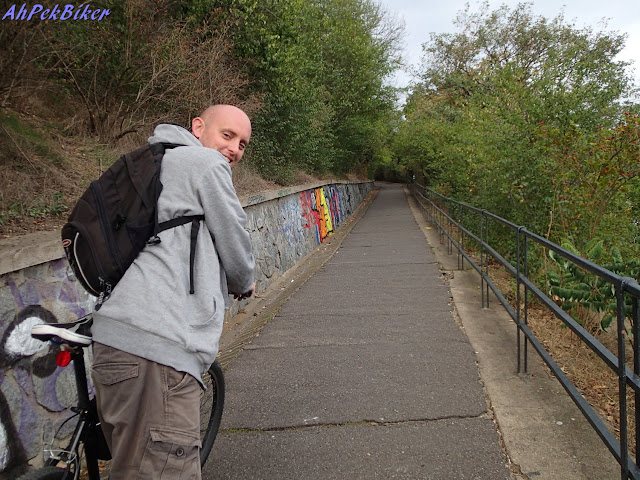 ... and then it was up some slopes to get to Letna Park. The initial part was a bit steep and we had to come down to push our bikes. 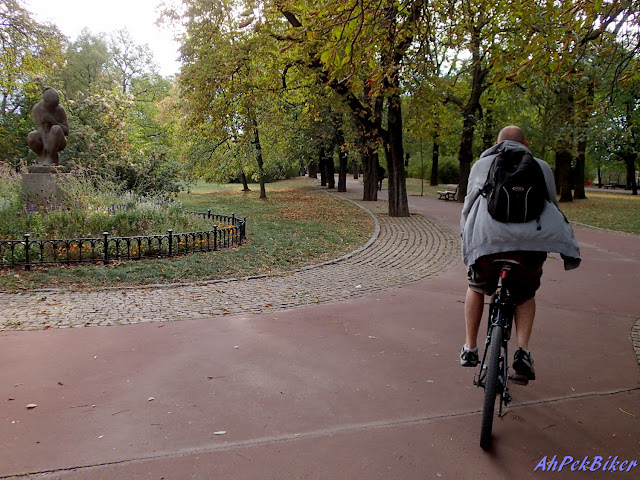 The park with its well planted trees, and nooks & corners with sculptures and fountains was great to ride in; it was quite large with lots of pathways to cycle on. Somewhere there were water taps to top up water bottles, we did that as mineral water is not cheap in the city (about RM18 for a 1.5l bottle). 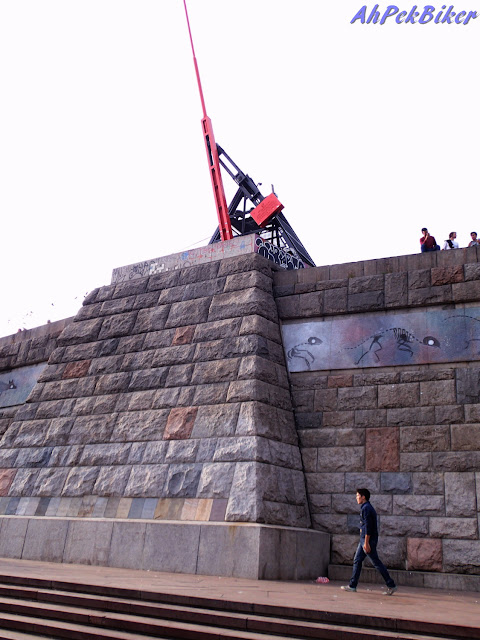 We rode pass the Metronome, it's a red upright pendulum. It's left to right swinging reminds the residents that there are good times and there are bad times. Enjoy the good times but be prepared for bad. This was formerly where a giant statue of Stalin was once located. After the Cold War, the statue was blown up and replaced with the Metronome. 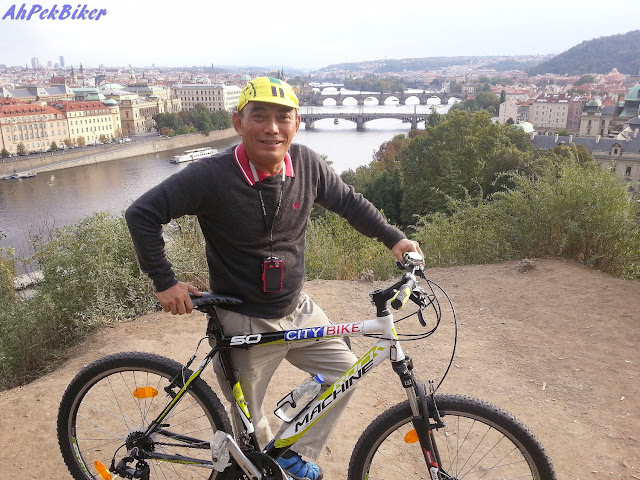 At on point, towards the east of the park, Alex suddenly swerved to a spot. "We have to stop here... and look". From here was a good view of the Vltava and three bridges to the right. The renown historical Charles Bridge is the one at the centre.

Here too, is one of the best panoramic view of the city... if only we had brought a picnic basket along, we would be relaxing and sipping wine in the quietness of the park while enjoying a good view. 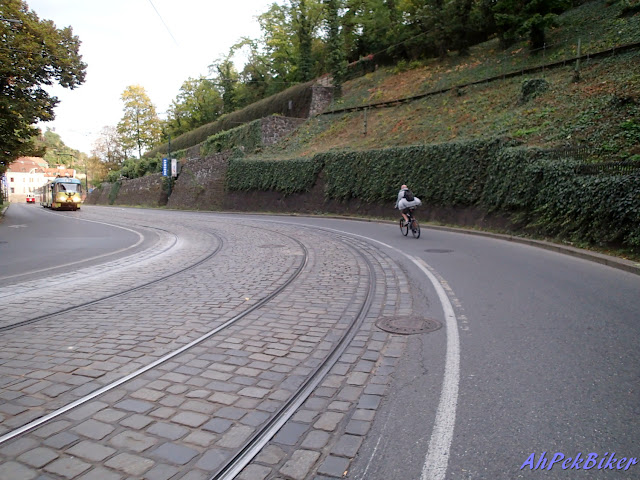 Out of the park, Alex took us whooshing down the slopes and curves of Chotkova Street, where the historical trams still operate. He was half-expecting me to take it slow, but there I was tailing him closely. Little did he realise that, having cycled down the slopes from Gohtong Jaya, I was fine with this. 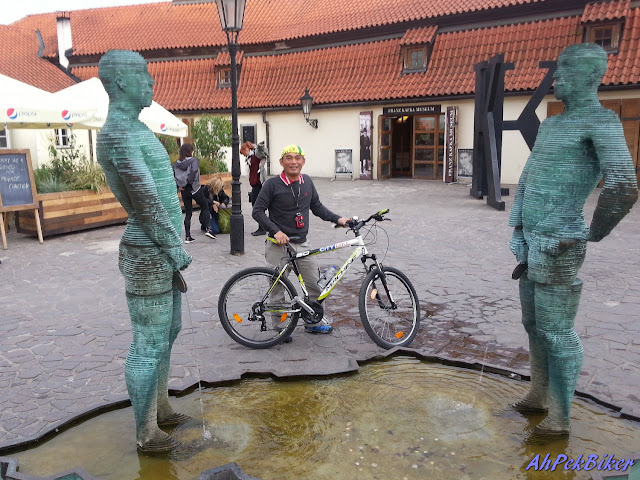 Down at level ground, it was time to be a tourist again as Alex took me to view some of the odd sights of the city. First were these pair of pissing men called the "Pissing Fountain" done by David Černý at the Kafka Museum compound.
If seeing two men peeing is not strange enough, one can send a SMS to the fountain and the men will write it out with their "pee". 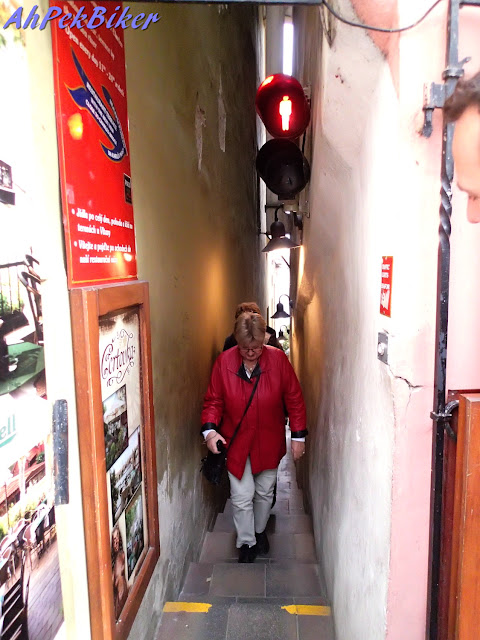 At the "Narrowest Street" I just had to trying walking through. This street is so narrow that it's one person wide. There is a nice cafe at the top and traffic lights control the direction of traffic. The light turned green and I walked through; now I can claim having walked through the narrowest street. At 30cm at the widest point, perhaps it's the narrowest in the world. 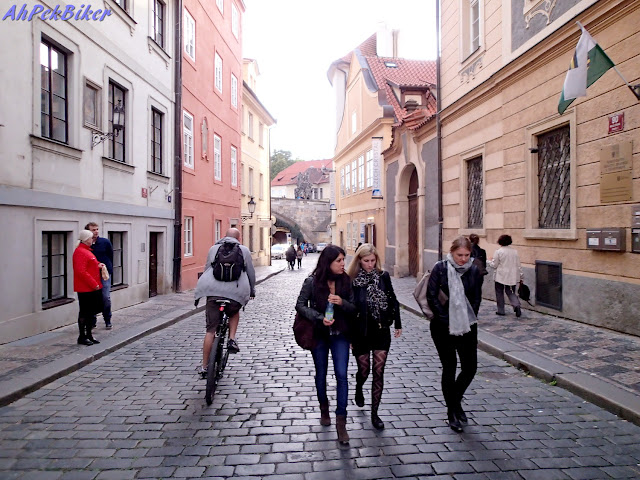 It's back to cycling, this time along cobble-stone streets as we rode under the Charles Bridge (that's the arch structure in front on the photo above). The bike went bumpity-bump onto my rear; fortunately it was only a short stretch and I did not get any ass burn. 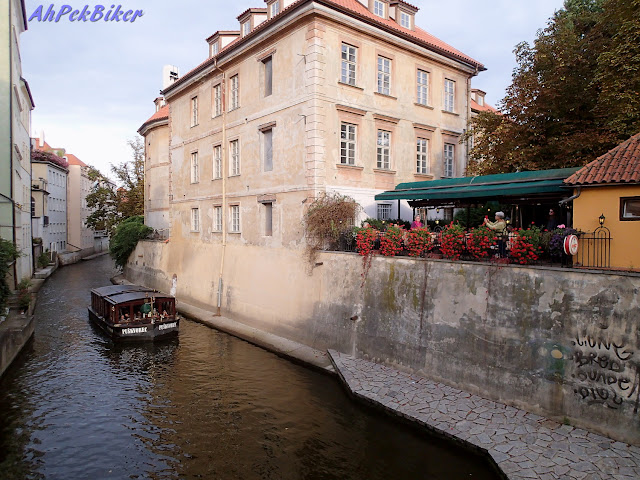 Rode pass the canals on which I had a cruise the previous day..... 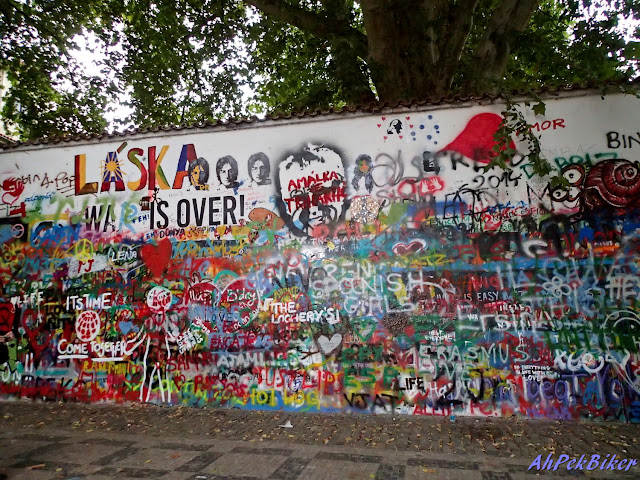 .... and onwards to a vividly coloured wall mural. The wall even has a name, the "Lennon Wall". Graffiti artists drew this mural with Lenon's face there, probably as a play on the word Lenin. The city authorities had it white-washed but the following day it was back! Initially it was a place for locals to write their dissatisfaction using lyrics from the Beatles' song, now it's more graffiti by tourist leaving their names there. 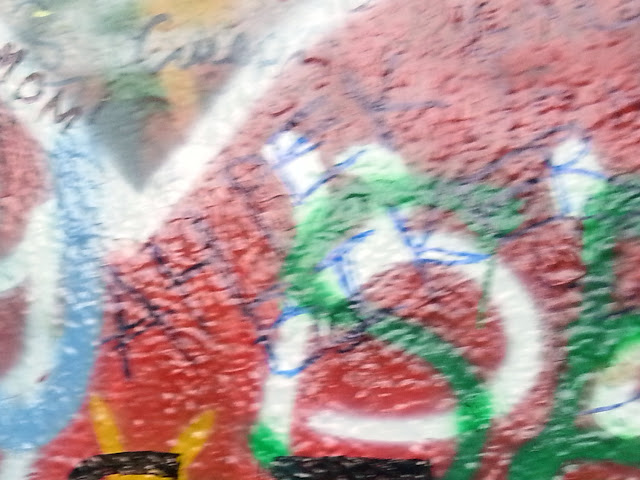 Alex was ready for some graffiti by me. He handed me a couple of marker pens and there on "Lenon's Wall" I left my little mark "AhPek Biker" in Prague! 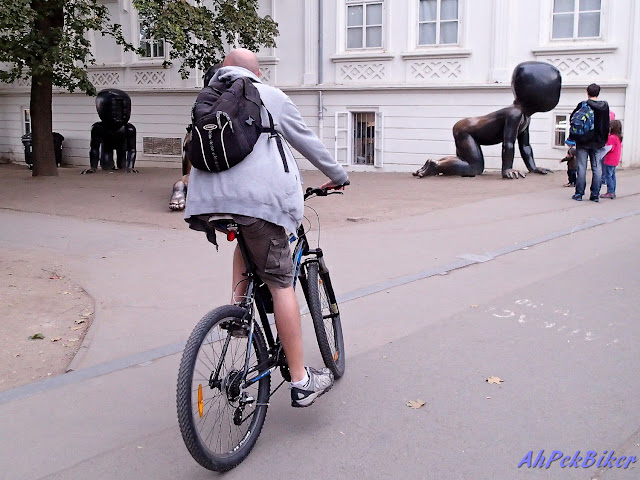 Next was the "Tower Babies" at Museum Kampa. These babies were those seen crawling up the Zizkov TV tower (which many considered to be an ugly tower) to beautify it, at night the babies lit up in the colours of the Czech flag. The ones here seemed a bit lost in finding the tower, so Alex called them the "Lost Tower Babies". 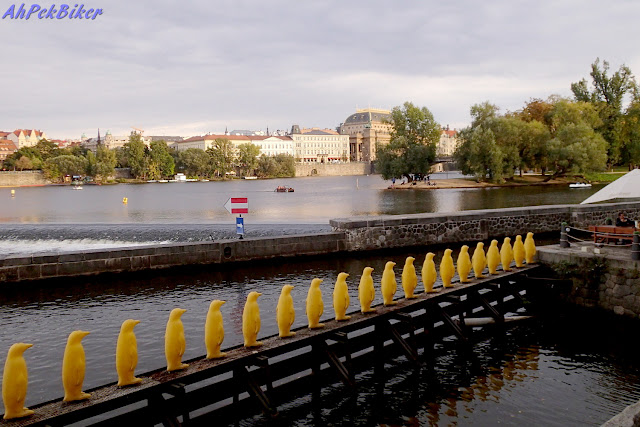 We were at the river side when I suddenly saw this line of "Yellow Penguins" lining up on a long board-walk, supposedly queueing up to board a boat for the Antarctic. At night they light up in a bright yellow. Since they also seemed to be heading for the pub in front, Alex called them "The Drunken Penguins". He does have a sense of humour! 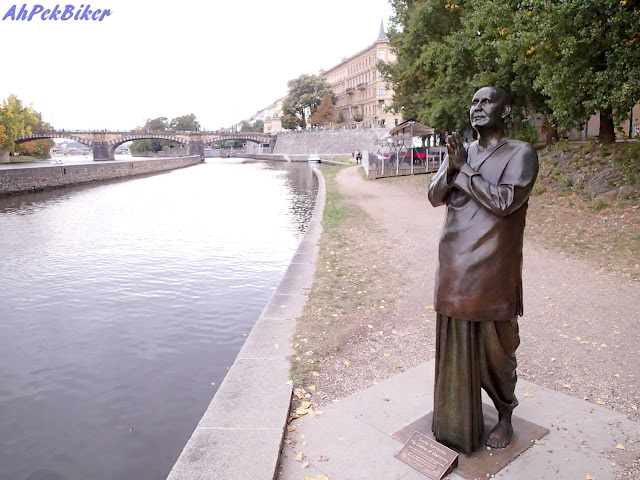 Next was something more sober, a bronze statue of a Buddhist monk, Sri Chinmoy, praying beside the Vltava River. It's called the "Statue of Harmony". At the foot of the statue a plaque had this saying by Sri Chinmoy "If you can create harmony in your own life, this harmony will enter into the vast world'. Bearing this in mind, I said a short prayer of thanks for a safe ride. 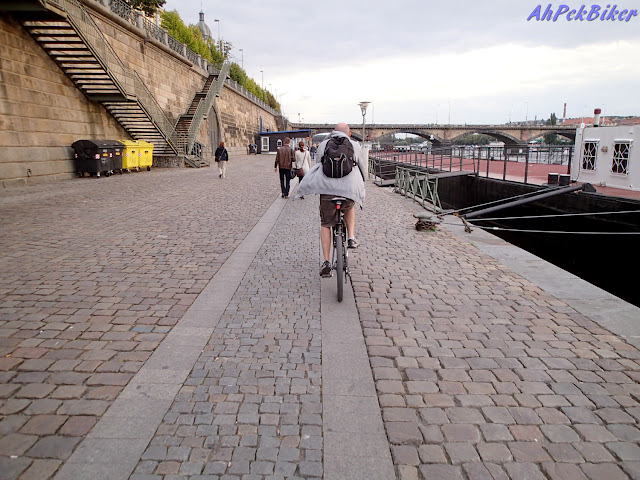 It was across the Vltava again, this time at the Legii Bridge to get back to the other side, where we cycled down by the riverside at Naplavka. In the morning, there is a farmers' market here. What was interesting was that among the cobble stones were two narrow paths of smooth slab for the convenience of cyclist; how considerate of them! No bumpity-bump here! 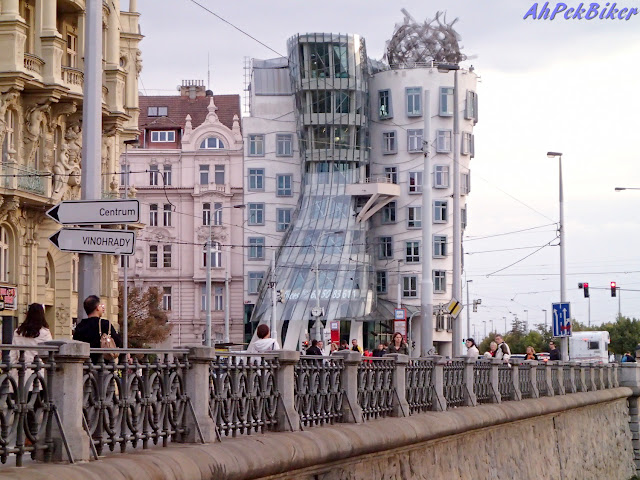 Above, at street level, was this building called the "Dancing House". It's suppose to be Ginger Rogers (with a spread out skirt) and Fred Astaire (with the spiny head) dancing together. 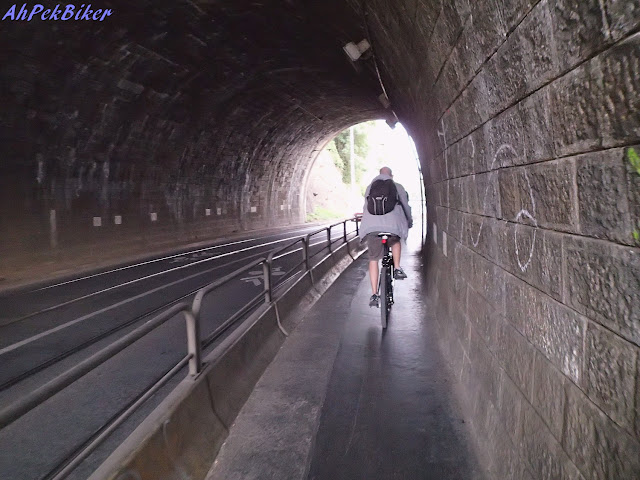 Riding up back to the street level, it was through the Vysehradsky Tunnel where we cycled on lanes provided for pedestrians and cyclists. 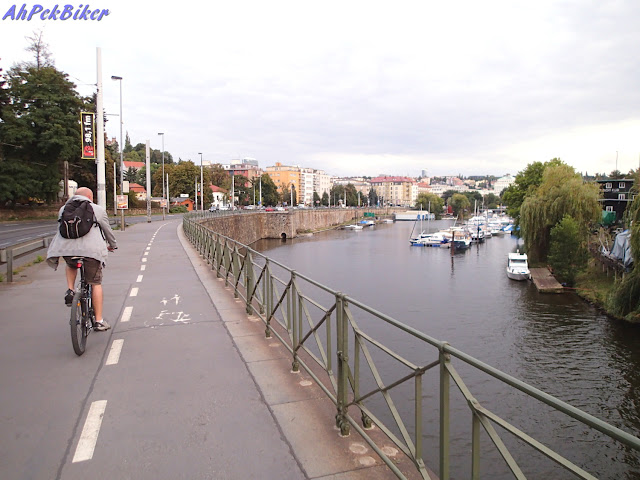 Another one kilometre ahead we reached the CERE Yacht Club and it was time to turn back; the next bridge crossing was four kilometres ahead. Would have been great to proceed there, but we had a schedule to meet. 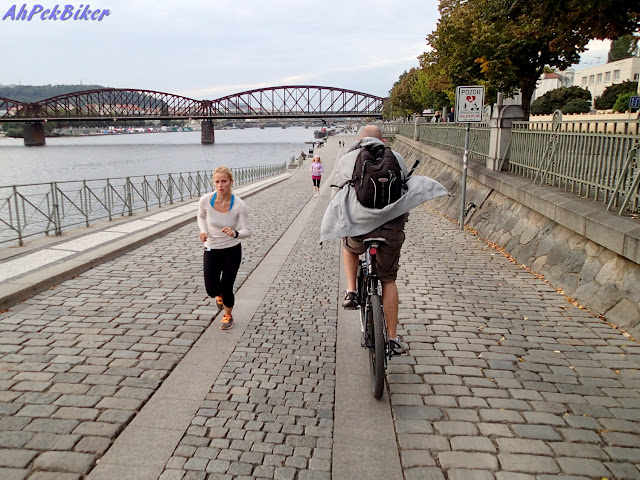 We made a U-turn and went down to the river side again as it was a nicer, quieter place to ride. 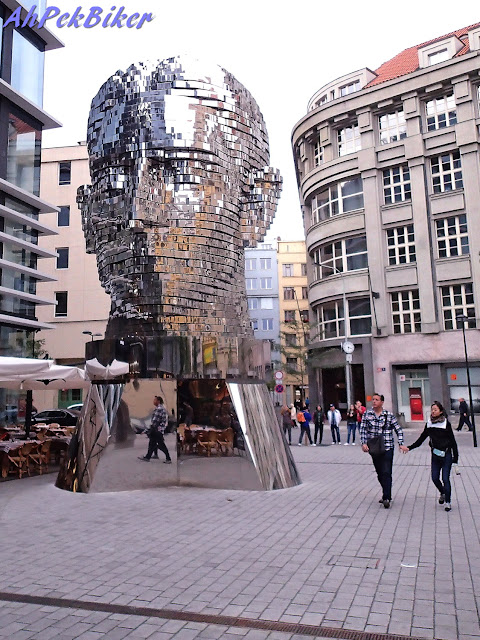 On the way back, we made a short detour to Hlavni mesto to view another kinetic sculpture by David Černý  - a rotating head of Franz Kafka. The head is made up of slices which rotates at different speed and directions, every once a while they will align to form a proper head. The photo above shows the head almost at proper alignment. For a video of the head click here. 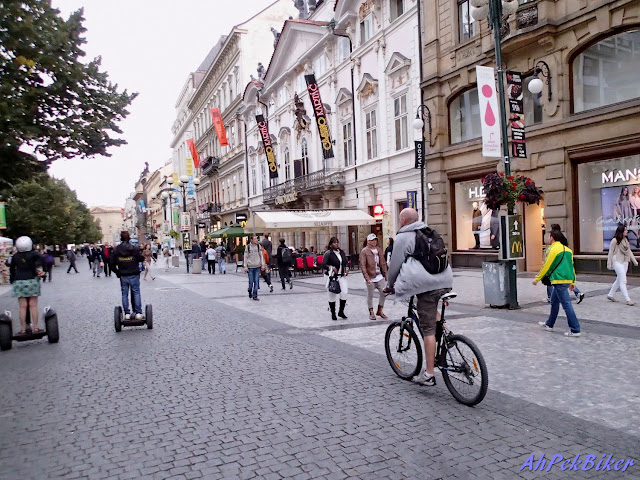 A short stretch through a shopping street and we finished our ride. We passed by some people on Segways and I pitied them on the limitations. Sure the Sedgways did not need leg muscles but it would not have gone as far and as high as we did.

Well, my itchy cycling legs have been soothed.... but I wonder for how long?

You are at - Jotaro's Blog / AhPek Biker -Europe 2015 / Cycling Europe / Prague Old Town & Lesser Quarter Cycling
If you like this, view my other blogs at Jotaro's Blog
(comments most welcomed below. if you like this pls share via facebook or twitter)
Posted by Jotaro Zen at 6:01 AM No comments: