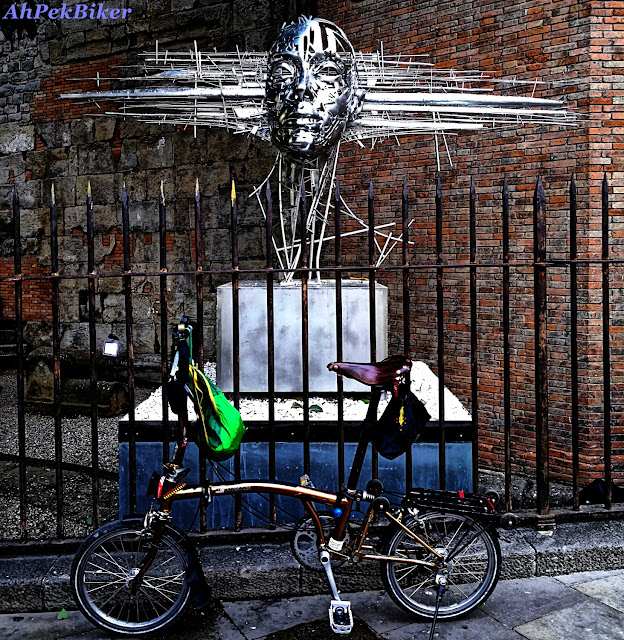 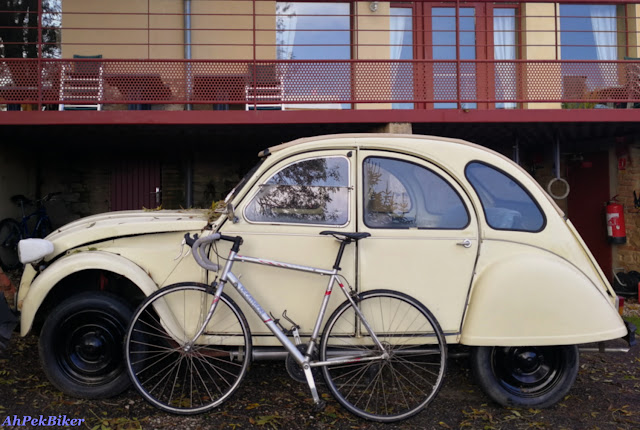 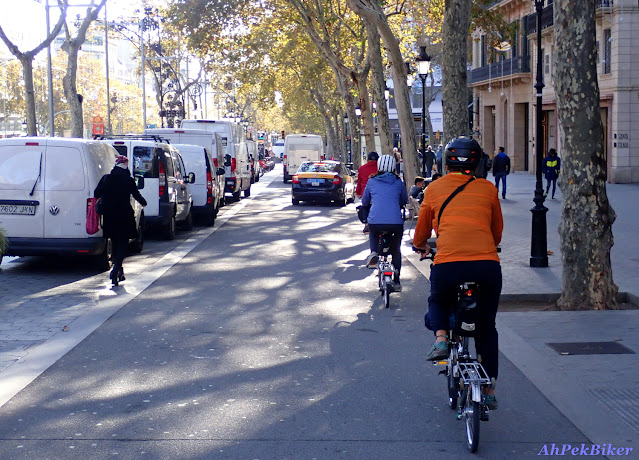 After a simple in-hostel breakfast, the four of us (Fenn, Jo, Sin & me) rode out for a short half-day adventure around Barcelona. A few days earlier I had rode around together with new friends from the Brompton Barcelona group. Today I am just glad to cycle with my friends and just follow them wherever they go.
We rode out from our hostel and were soon riding on the main through-way, Avingunda Diagonal. is the name of one of Barcelona's broadest and most important avenues. It cuts the city in two, diagonally with respect to the grid pattern of the surrounding streets, hence the name. There are nice, shady cycling lanes in the here, but do note that these are sort of shared lanes and sometimes during peak hours taxis & delivery vans also use these lanes.

Soon we were away from the broad main roads and onto narrower, quieter side lanes and back alleys. Often these were devoid of motorized traffic and were a pleasure to cycle along. Although quiet, the front of these houses were often shops facing the main roads while most residents who stay on the upper floors will have their entrance from the back lanes that's why one will notice that these back alleys are very cleaned and relatively bright at night.
Barcelona is a city full of artwork, and here's some of what we saw: 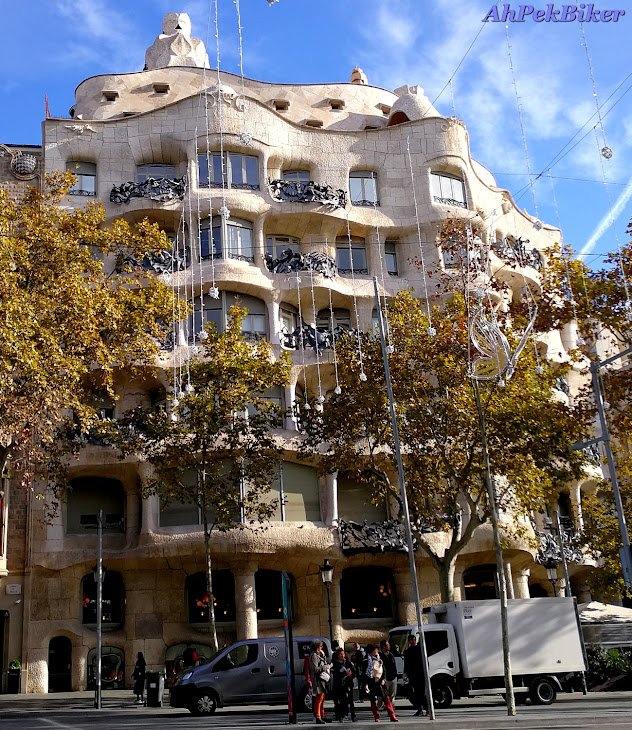 Cycling around Barcelona, one should never miss visiting some of the unique buildings designed by Gaudí; we stopped by at the La Pedrera-Casa Milà, which is the last private residence designed by architect Antoni Gaudí and was built between 1906 and 1912. At the time, it was controversial because of its undulating stone facade, twisting wrought iron balconies and designed by Josep Maria Jujol.

Gaudí influence were not on buildings only, it extended even to the lamp-posts, street furniture AND tiles on the pavements. 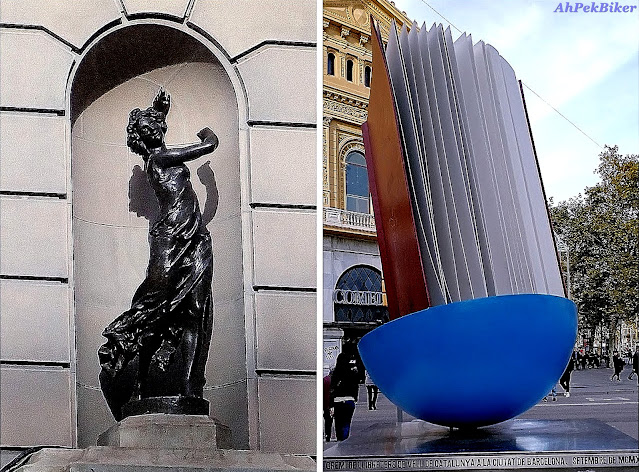 Around the city, were also artwork by many other artists, some contemporary and others modern such as a statue of a Flamenco dancer, and a giant sculpture of a book in front of the Guild of Booksellers of Catalonia (Gremi de Llibreters de Catalunya).

And some funky colorful street art; the one painted onto the roller shutter of a shop lot reminded me of those street art we saw at the Taipei Cinema Park (臺北市電影主題公園) during a 2017 cycling tour of Taiwan. 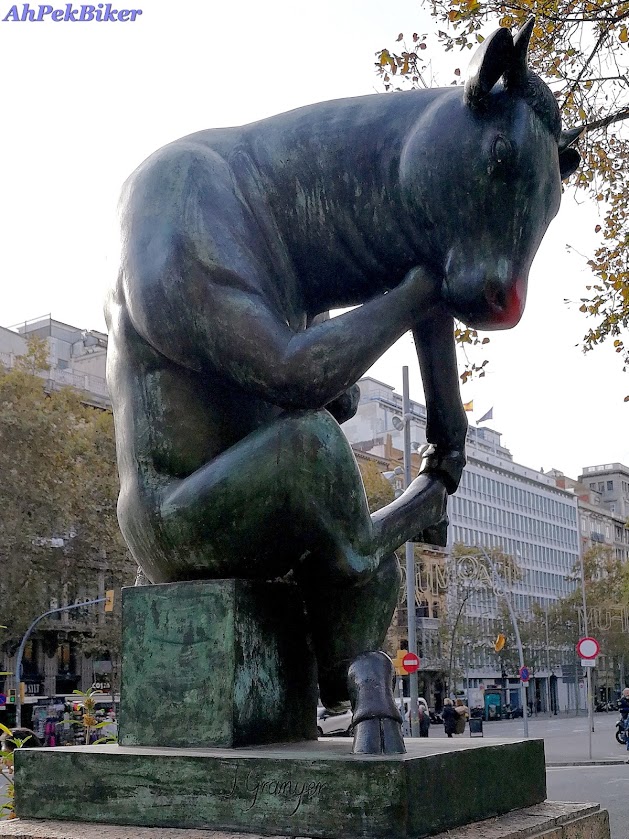 At Rambla de Catalunya, the Thinking Cow Statue (Brau Pensador) statue had us in a thoughtful mood. At the other end of the Rambla is the Flirting Giraffe Statue (Girafa Coqueta). These quirky statues were created by Josep Granayer I Giralt and inspired by The Thinker by Rodin; and Venus Victrix by Antonio Canova.

At the compound of the Villa del Arte gallery, were more modern artwork - mirror shiny, stainless steel sculptures by Liechennay. Despite his European sounding name, Liechennay originated from Indonesia.

One shop that should not be missed is 2Bis Artesania, its an artistic gift shop which sells beautiful souvenir items. It's located at Carrer del Bisbe (Bishop Street). 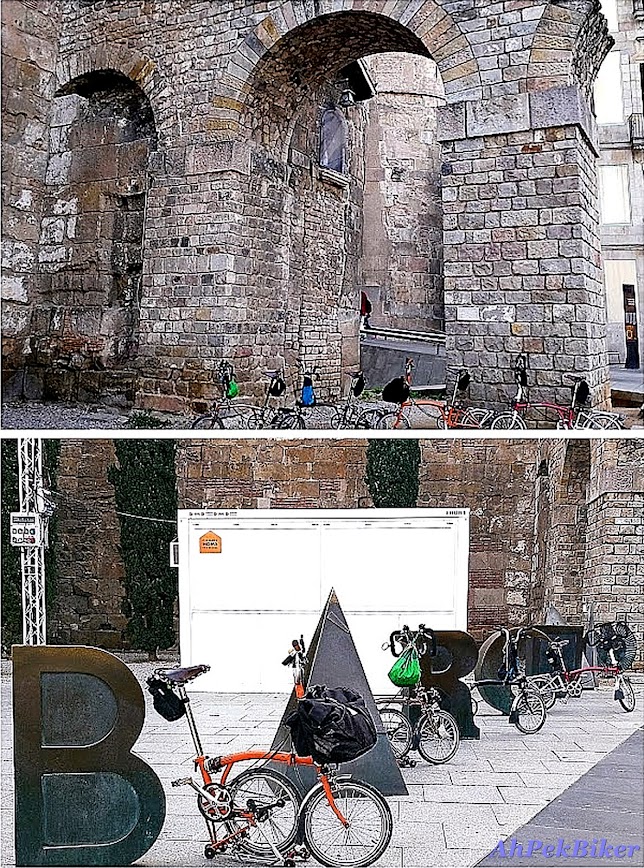 And our Brompton bicycles joined in the art scene with some creative parking near the Temple D'August, and at the BARCINO sign, (the old name of Barcelona - refers more to Barcelona Old Quarters / Gothic Quarter) .

Aside from the art, we also admired the many beautiful, unique and stately buildings scattered around the city, please note that the buildings shown below are not in sequential order of our ride.

Casa de les Punxes is one of the most easily recognisable buildings because of it's fairy-tale castle look. One of the most famous works by Josep Puig i Cadafalch, its official name is Casa Terradas as it was commissioned in 1905 by Bartomeu Terradas i Brutau for his three siters: Àngela, Josefa and Rosa. Its most representative elements are its six pointed towers, topped by conical-shaped needles, which give the house its nickname (Casa de les Punxes means House of Needles in Catalan).s 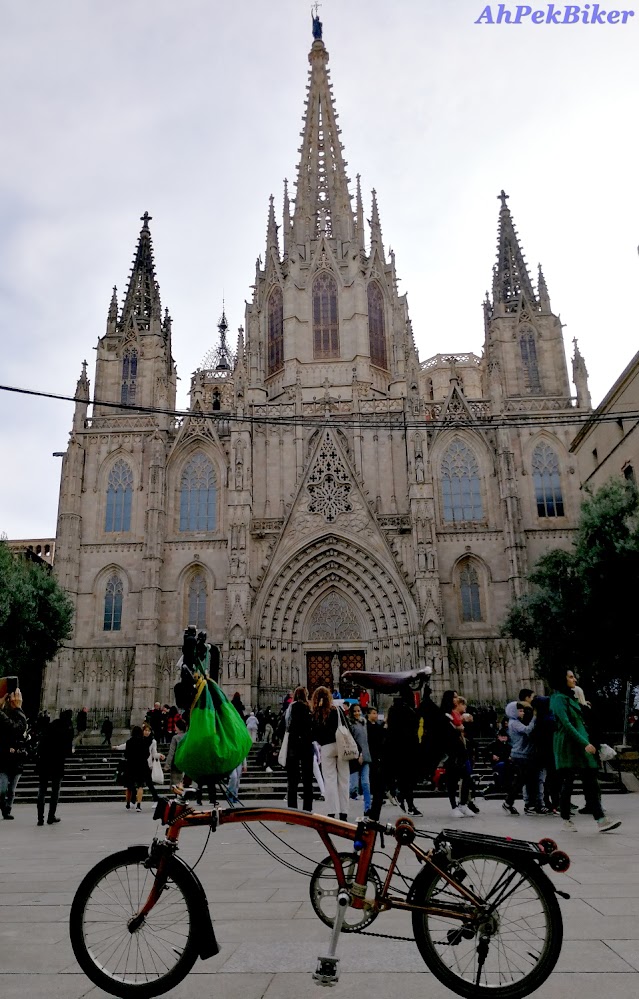 Goofy, my bike, sharing the limelight with the Barcelona Cathedral. This Gothic cathedral was constructed from the thirteenth to fifteenth centuries, with the principal work done in the fourteenth century. The cathedral is officially known as the Catedral de la Santa Creu i Santa Eulàlia, (Cathedral of the Holy Cross and Saint Eulalia) as it is dedicated to Eulalia of Barcelona, co-patron saint of Barcelona, a young virgin who, according to Catholic tradition, suffered martyrdom during Roman times in the city. One story says that she was exposed naked in the public square and a miraculous snowfall in mid-spring covered her nudity. The enraged Romans put her into a barrel with knives stuck into it and rolled it down a street (according to tradition, the one now called Baixada de Santa Eulàlia). The body of Saint Eulalia is entombed in the cathedral's crypt.

..... to stately buildings with grand frontage. 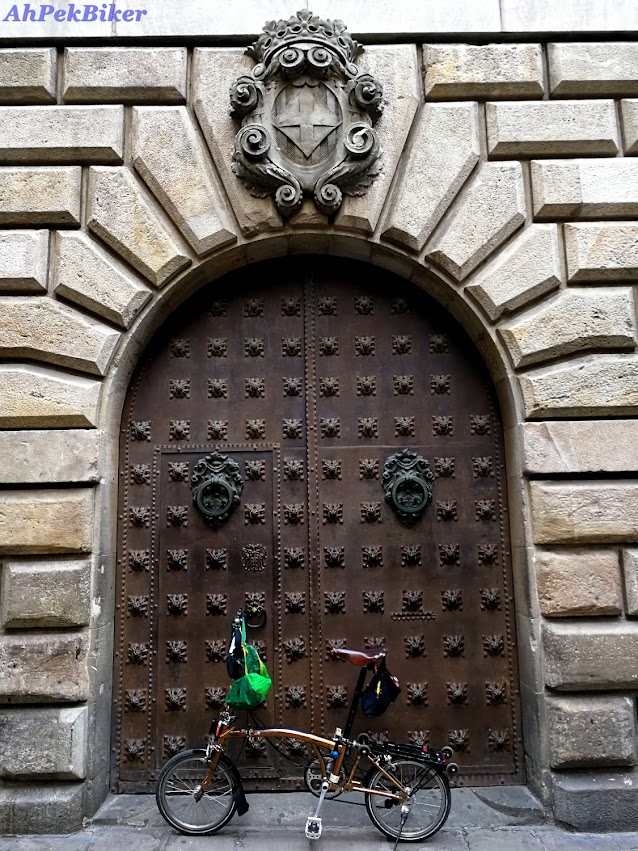 And Goofy is caught in the act again, admiring a solid doorway framed within an even more solid looking arch.

Even the markets are beautifully designed with colourful jigsaw-patterned roofs with ceramic tiles, and elegantly wavy-curved eaves.
This is the Mercat de Santa Caterina; to check out their shops & services, click here. 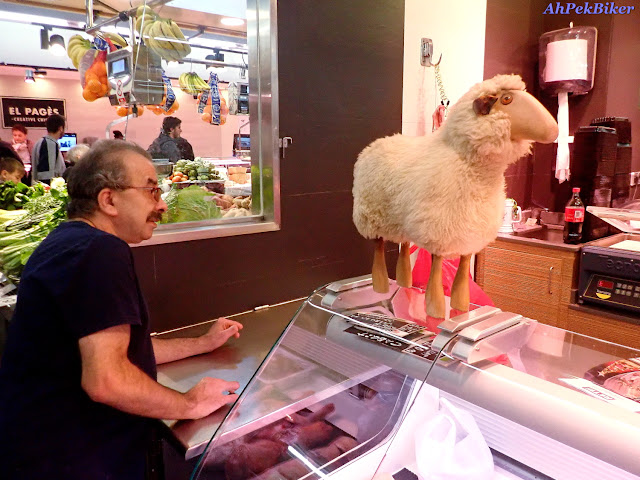 This is where we will have our lunch, but let's check out some of the food stall first: no prizes for guessing what this stall sell. The woolly sheep statue caught my eye, but on closer look it's eyes seem to have a dazed, shocked look; probably it knows what fate lies ahead. 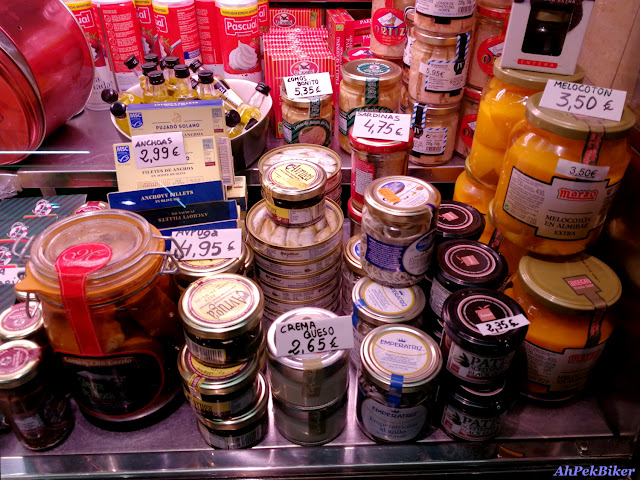 This shop sells breakfast spread and pickled fruits including: Crama Queso (Cream Cheese), Anchoa (Anchovies), Sardinas (Sardines), Melocontos (Peaches)
It also sells Avruga Caviar, (a caviar substitute. made from herring and other products. Unlike actual caviar, it does not contain fish roe). 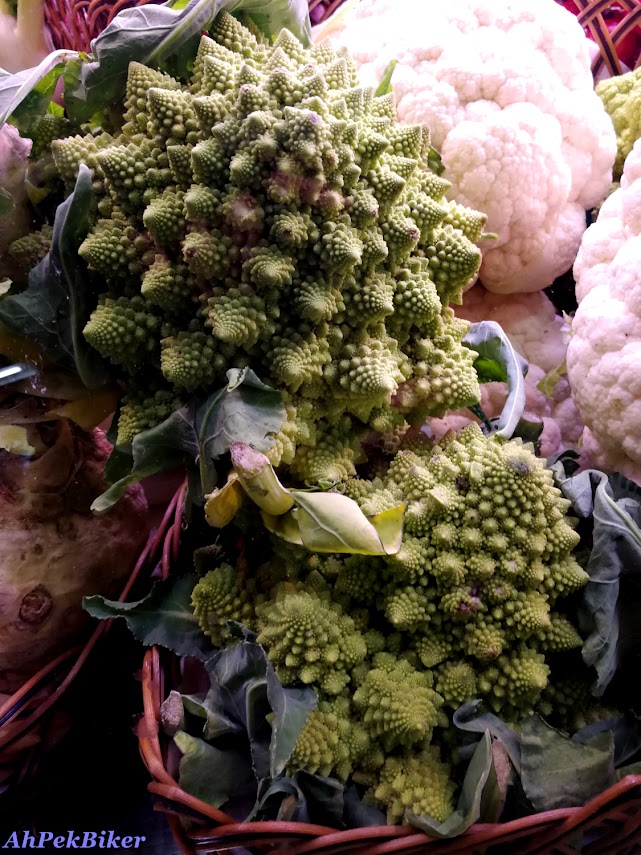 Ignoramus me from the tropics thought that this greenish thing was a flower; actually its Romanesco Broccoli. Uniquely beautiful, it is a smart vegetable with it's sharp buds making up a logarithmic spiral, giving a form approximating a natural fractal; each bud is composed of a series of smaller buds, all arranged in yet another logarithmic spiral. Nutritionally, Romanesco is rich in vitamin C, vitamin K, dietary fiber, and carotenoids. 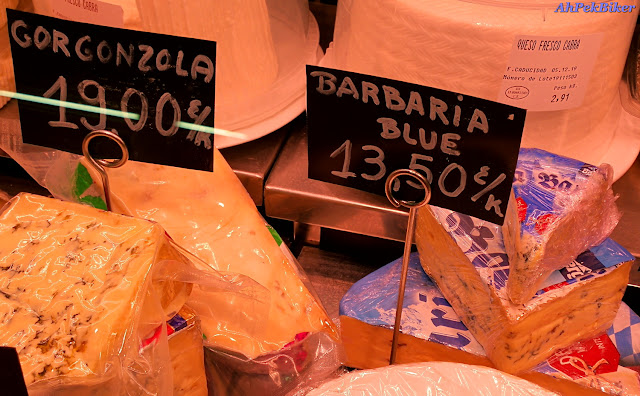 At the cheese shop, we noticed that the cheese here were very cheap ..... especially their Gorgonzola and Barbaria Blue Cheese.
But do not make the same mistake as us, we had thought these were for spread. But apparently they should be used for cooking. Back home I used the Blue Cheese as a spread and ended up with a tummy ache 🙄. 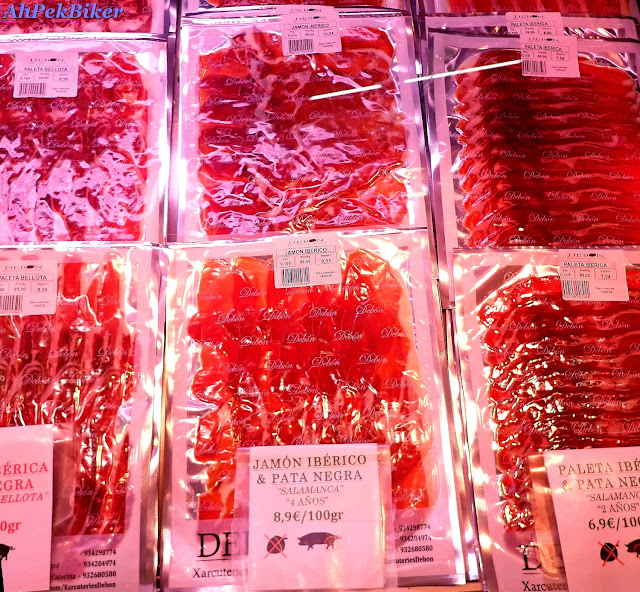 And one must not miss buying the renown Jamón ibérico - there were several grades, the normal and the premium. My advise is - get more of the premium as they are very good and "cheaper" here.

Lunch was at La Torna where we had these meatballs mushrooms, and a beautifully done sirloin steak ..... followed by ..... 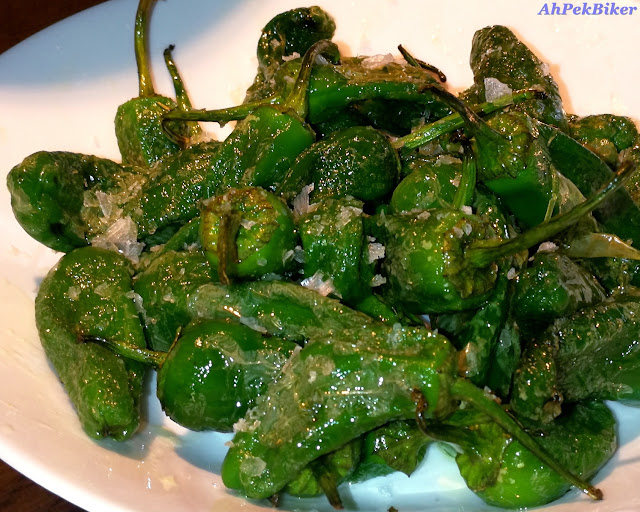 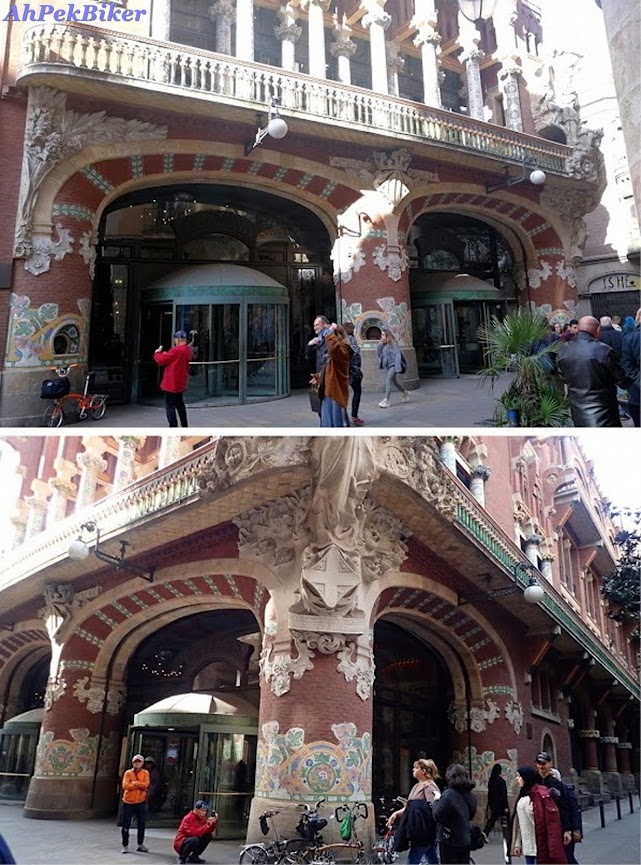 Time to head back, but before that on last place to visit - the Palau de la Música Catalina (Palace of Catalan Music). But we are not here to attend a musical recital or a concert, although it would be nice to as we are short on time. 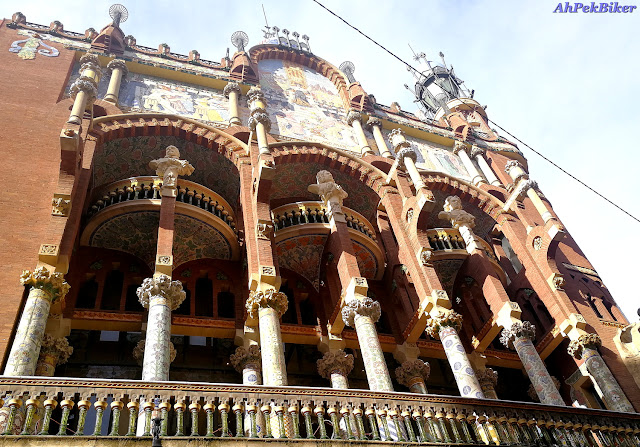 Instead we are here to admire the building design especially their colorful embellishment on the walls, arches and columns.
"Designed in the Catalan modernista style by the architect Lluís Domènech i Montaner, it was built between 1905 and 1908 for the Orfeó Català, a choral society founded in 1891 that was a leading force in the Catalan cultural movement that came to be known as the Renaixença (Catalan Rebirth). It was inaugurated February 9, 1908". 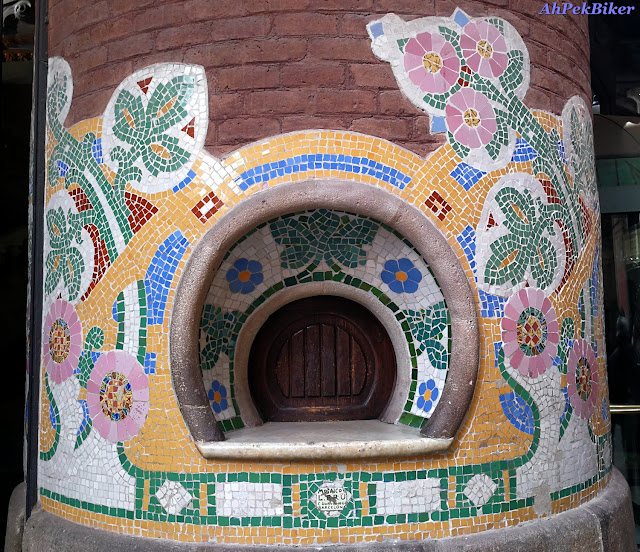 Many parts of the building were lined with colorful designs made up with mosaic tile inlays; even this ticketing booth was nicely done up. 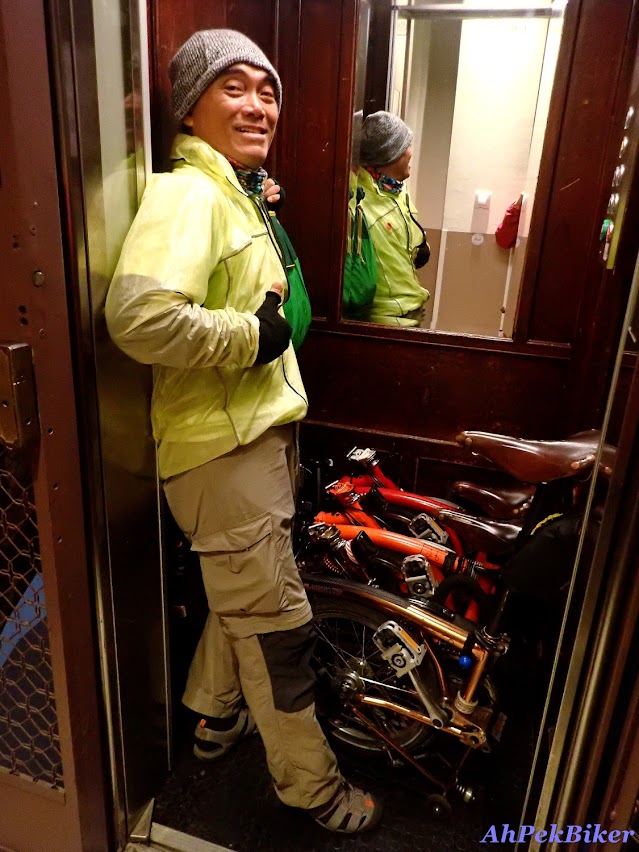 One last photo at the ornate lift of the Primavera Hostel (it's a small lift so one of us rode with our bikes while the rest took the stairs up). 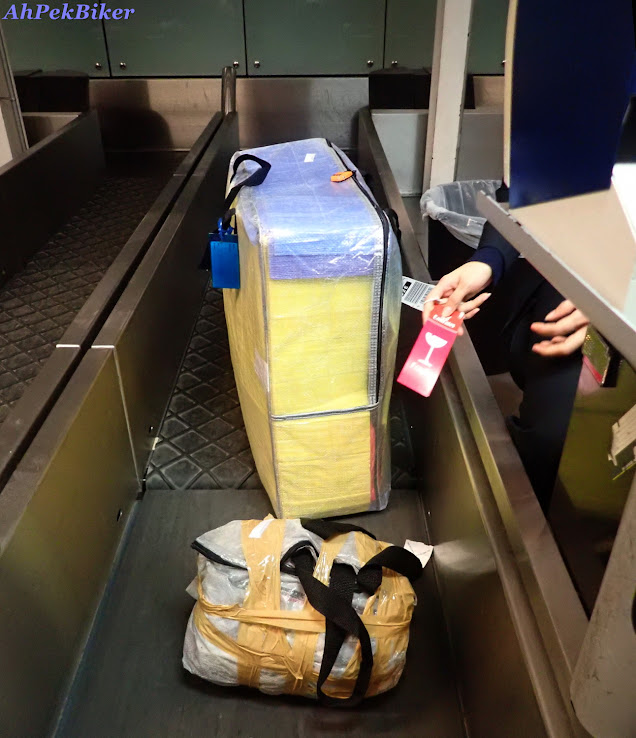 After a short rest, it was up to the Barcelona El Prat Airport by a Barcelona Taxi. I was pleasantly surprised to find that it was not necessary to lug my packed bikes over to the over-sized luggage section. There goes my bike packed in a Dimpa bag, with another Ikea Dimpa bag holding my helmets, Lourdes holy water and shopping items. 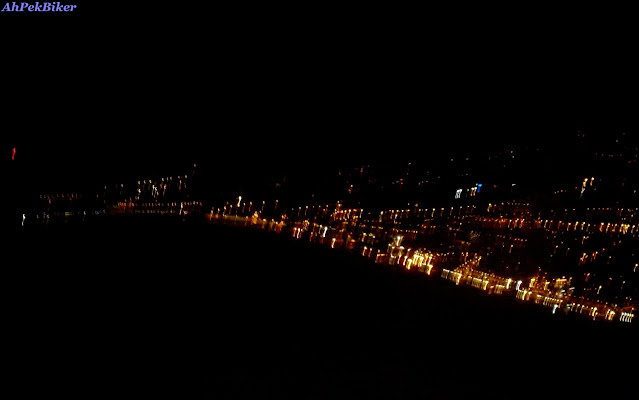 10:00 pm - As the plane took off, with a sad heart I had a last look of the night lights of Barcelona - we had had a great cycling trip.
Goodbye Barcelona, goodbye Spain, goodbye Portugal, goodbye France, and goodbye to all our new friends we made along the way.
Tchau!
Adiós!
Adéu!
Au revoir!