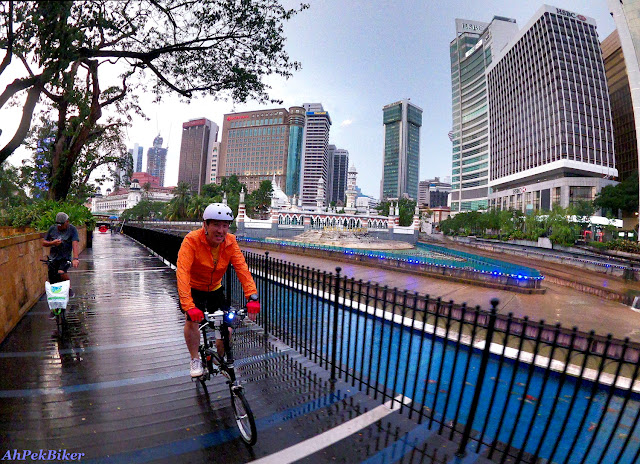 Dataran Merdeka to Chow Kit & Dataran Merdeka to Brickfields Cycling Lanes 2021
Cycling in Kuala Lumpur is getting more exciting with the authorities making more earnest efforts in providing cycling lanes for that are interesting and safe to ride along. Sure, some of these lanes are shared lanes, but one can't really complain and these shared sections go through some of the most beautiful parts of the city - one that runs along some of the city's major rivers and is aptly called Kuala Lumpur River of Life Cycling Paths.
The River of Life (RoL). initiated in 2012, is a seven-year project to transform the Klang River (and it's feeder rivers) into a vibrant and live-able waterfront with high economic value. Covering eight (8) rivers with total length of 110km, this project is divided into three (3) major components i.e. River Cleaning (led by Department of Irrigation & Drainage (DID) Malaysia), River Beautification (led Kuala Lumpur City Hall (DBKL)) and Commercialisation and Tourism (led Ministry of Federal Territory (KWP)). The project seems to have faltered, but of late (these past two years), it seemed to have kicked started again with newly built stretches at Chow Kit & Brickfields. Let's hope that, the construction & development will continue on and hit the targeted 110 km.! Nevertheless, even at this completion stage it has been listed as one of the Top 10 Best Waterfront by UK's the Independent.
The cycling scene started getting better when in 2015 the local authority, Kuala Lumpur City Hall, started getting looking into the improvement and encouraging of cycling by the implementation of Phase 1 of the Kuala Lumpur Cycling Lanes, leading from Dataran Merdeka and goes along the Klang River up till Mid-Valley City via what is known as the South-West Corridor Cycling Lanes, partly through the Brickfields locality. Unfortunately, after a couple of years portions of the lanes fell into disrepair (but all is good again with the latest effort of the RoL).
The in 2018, in conjunction with the 9th World Urban Forum (WUF9), the Phase 2 of the Kuala Lumpur Cycling Lanes were launched. This is a 6.80 kilometer loop that starts from Medan Pasar and leads to the Petronas Twin Towers via Jalan Raja Chulan and Jalan P. Ramlee, with a return leg via Jalan Ampang, Jalan Sultan Ismail and Jalan Raja Laut.
The latest upgrade are an extension of these lanes via the RoL project, has seen much improvement with better construction and routing, do note that at certain stretches these lanes are shared lanes with pedestrians. 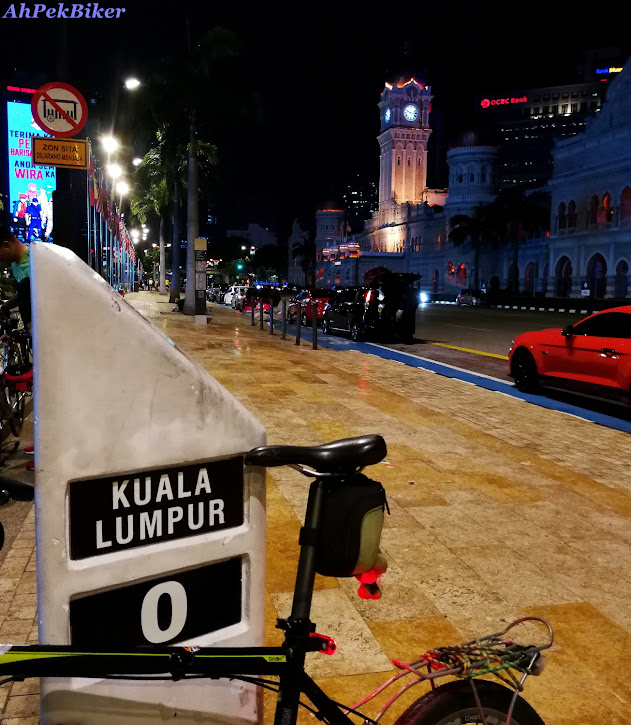 Presently, the RoL cycling trails consists of two loops; both of which conveniently start at Dataran Merdeka. The southern trail heads towards Brickfields and the northern trail heads towards Chow Kit (or more accurately its Tiong Nam locality); other than these two, there are further extensions which many do not know of - we will come to that later on.
A good place to meet up is a the KM 0 milestone marker at one corner of Dataran Merdeka. 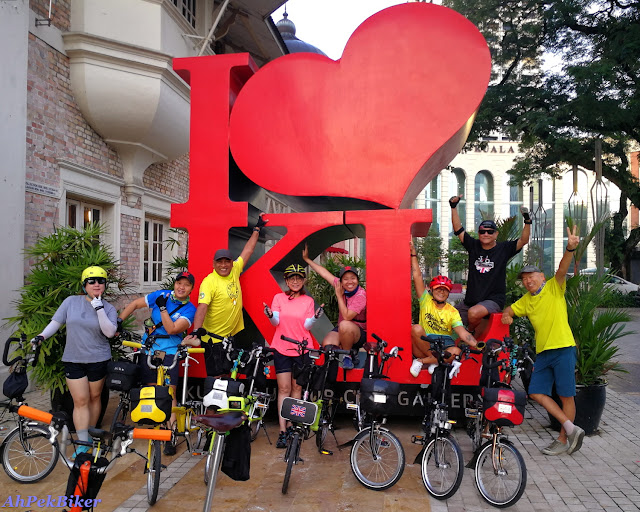 For ease of presentation, we will treat this two loops separately (with route maps), with both starting from Dataran Merdeka (of course, one can start anywhere along the loops to one's convenience). But just before riding off, do stop at a few spots for some memorable kick-off photos such as the "I LOVE KL Monument", seen above. 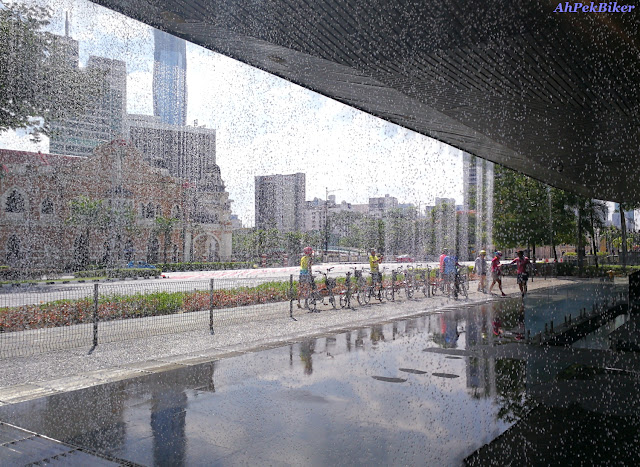 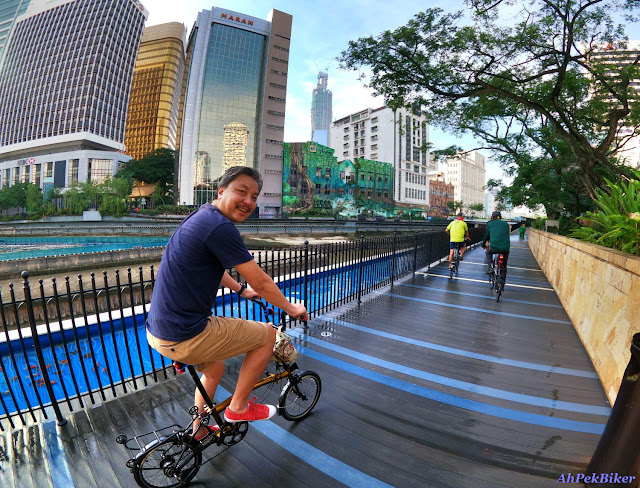 This will lead to the back of the building onto a board walk trail running next to the Masjid Jamek sitting on the confluence of the Klang River and Gombak River. 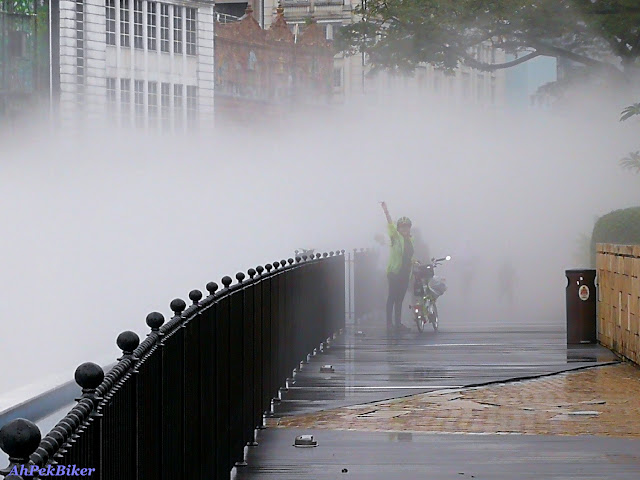 If your timing is right (usually at mid-morning and dusk), pipes along the river wall will spray aerosol water droplets and the whole area will be shrouded in a mist.
(Warning: do take note of the diagonal joint of the timber boardwalk and the paver bricks seen above. The acute slant joint and the uneven surface have cause many a cyclists to slip and fall). 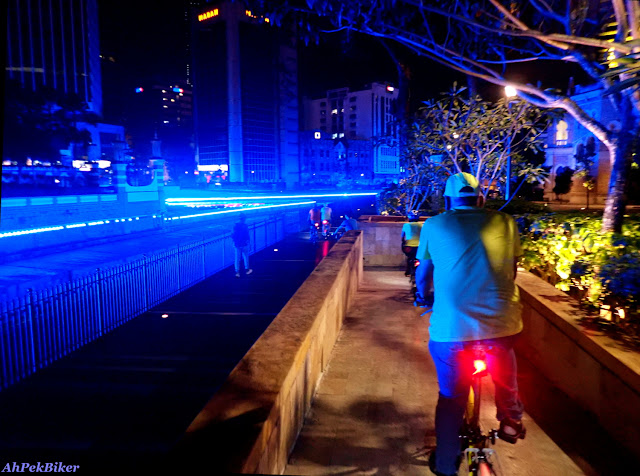 At night, usually after dusk, this whole area is illuminated in glowing blue light that adds a mysterious aura to the place.
Take a pause here to admire the Bangunan Sultan Abdul Samad Gardens and view the reflecting pool leading to the clock tower, as can be seen in the Google Street View seen above. 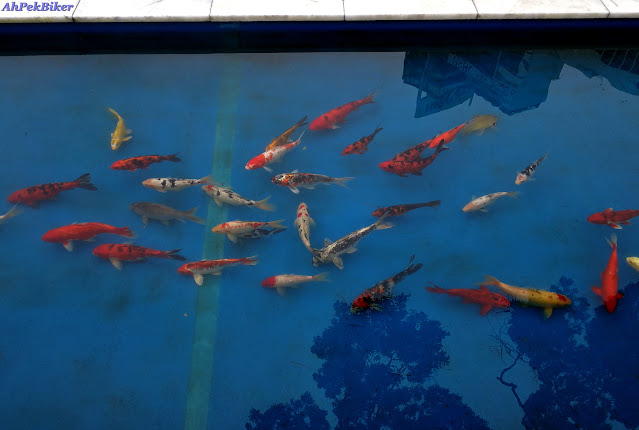 The River of Life (RoL) aims at rejuvenating life in the rivers, although the river at this section is now much cleaner and almost cleared of debris, it is still muddy despite de-silting by several retention point silt traps up-river. For the meantime, to simulated this life, an artificial "Blue River" filled with Japanese Koi runs for a short stretch along the trail here. 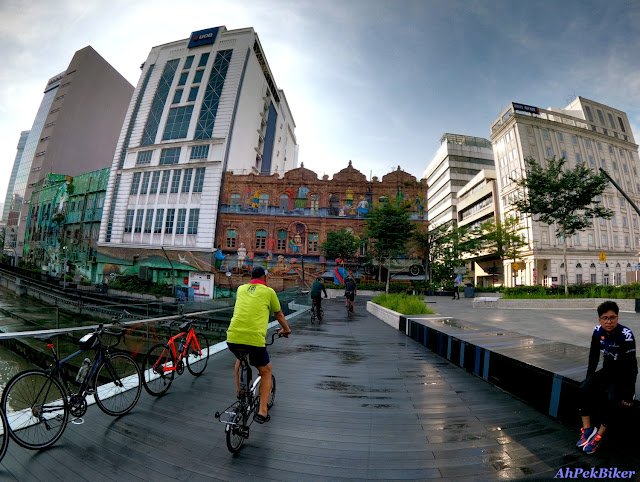 From this trail, take a slight left detour at the top to reach the "Masjid Jamek Lookout Point" platform. Ahead are two murals, the right one depicts urban life during colonial Malaya; while the left one depicts rural kampung life at the jungle fringes. 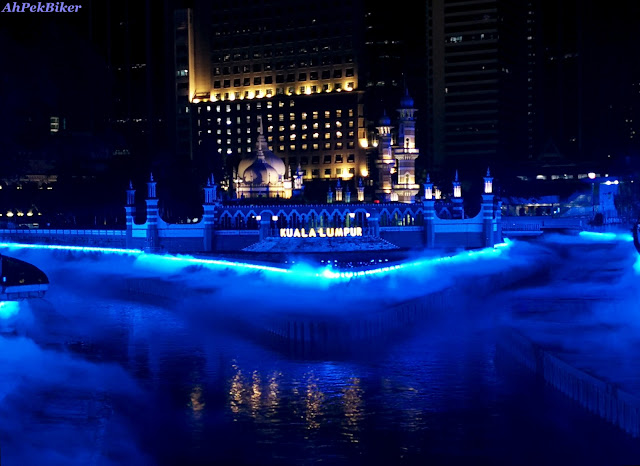 From here will be the best view of the Masjid Jamek of Kuala Lumpur, especially at night when the blue lights are out and the misty aura makes this like a scene from the Arabian Nights.
This mosque is where Kuala Lumpur has it's roots and also how it got it's name. Explorers looking for tin would come up river from Port Klang to get to the tin mines further up river; but when they reached this confluence of the Klang and Gombak rivers, their boats could not proceed any further as it was to muddy, and they had to continue on foot. Soon a settlement started here and grew to become the present day city which was named after this muddy confluence, i.e. Kuala Lumpur which means "muddy confluence" in Malay.
Click here for a Google Street View Masjid Jamek. 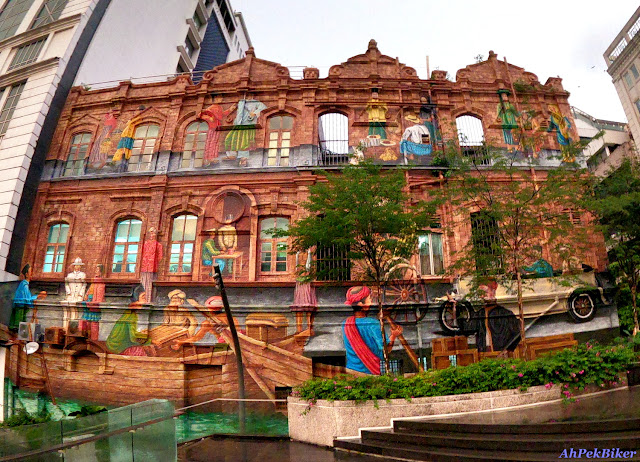 A close up view of the "Colonial Era: wall mural. 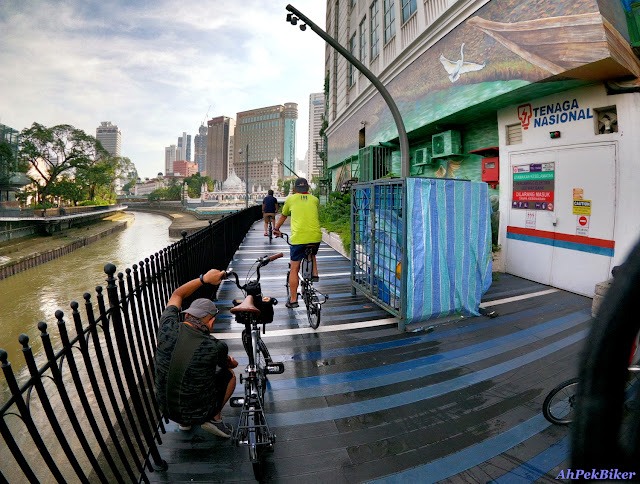 And then loop down to the boardwalk on the other side of the river ..... 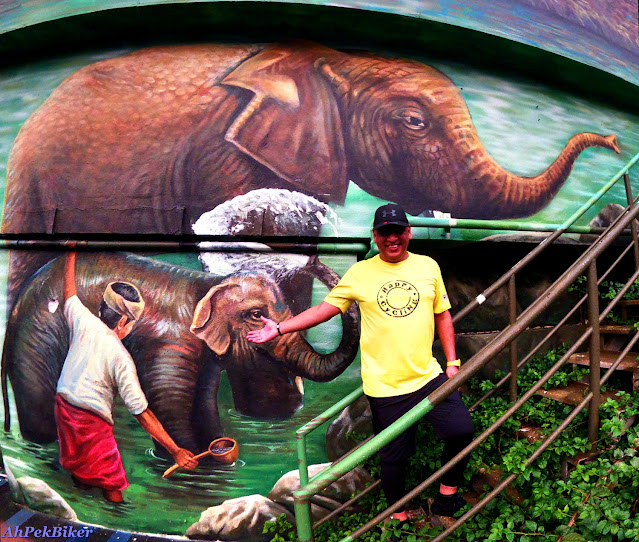 ..... for a closer look at the "Jungle" mural and have some fun with the elephants there! 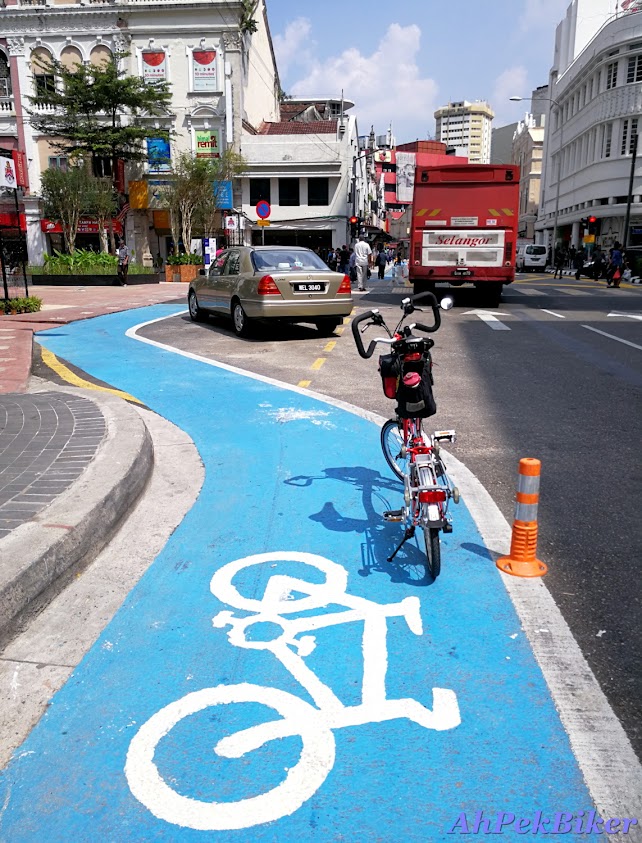 From here it exits the dedicated paths and go onto shared lanes along Lebuh Pasar Besar. 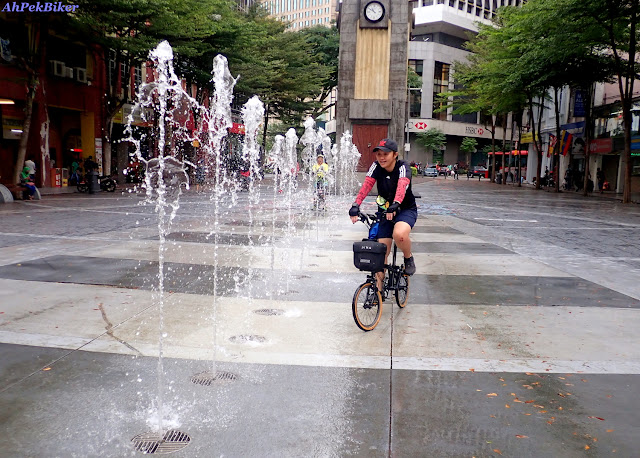 Here one can make a quick detour into Medan Pasar to enjoy the Dancing Fountains there.
Although it's called Medan Pasar (Market Square in English), there is no market; but back during the founding days THERE WAS a market here, one that was just next to the confluence of the rivers. 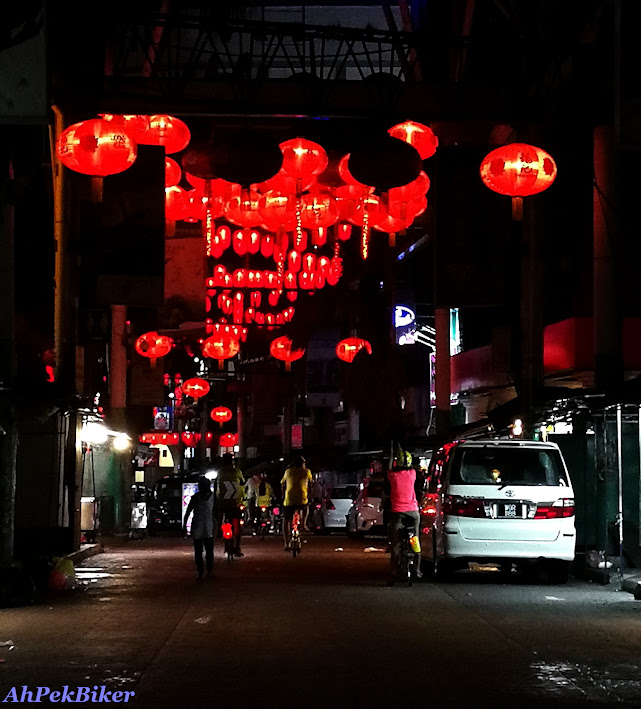 Slightly further ahead, the shared cycling lane is discontinuous, and goes onto the roads with several left and right turns, - into along Jalan Hang Kasturi, Lebuh Pudu, Jalan Tun H.S. Lee and finally onto Jalan Tun Tan Cheng Lok where it meets and continue as Jalan Tun Sambanthan, just in front of Pasar Seni (KL Central Market). The dedicated lanes will then continue ftom here.
But while we are looping and loofing around here, it could be interesting to detour to the nearby Chinatown precinct of Petaling Street where street vendors occupy the whole road. It is seen in the above photo, sans the street during the later hours of the night. 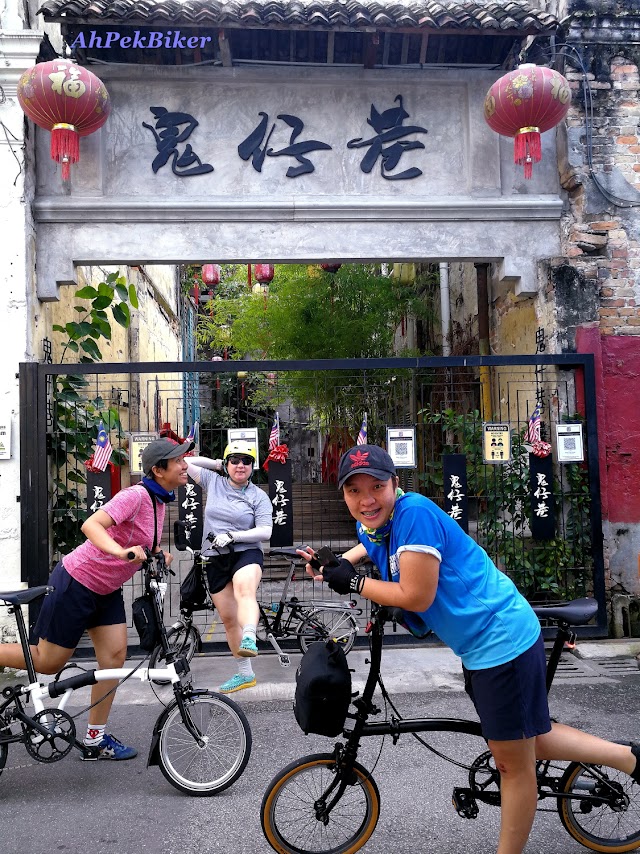 A further detour will take one to Kwai Chai Hong Art Alley (鬼仔巷), a short street that has been mocked up with artwork showcasing Chinatown's past.
Okay, time to stop being tourists and get back to cycling; time to pull ourselves from the old core of the city and continue on the cycling trail.
Passing by Pasar Seni (KL Central Market), just after the Jalan Tun Tan Cheng Lock/Jalan Hang Kasturi traffic lights, we start onto Jalan Tun Sambanthan. And it is here that we have to be on the look out for the gap that leads back to the dedicated cycling lanes along the Klang River, as seen at the above Google Street View. It's that section on the left of the trees next to the river.

A combo photo showing entry point opposite Pasar Seni, crossing the Klang River and then beside the ramp coming down from the KL General Post Office. 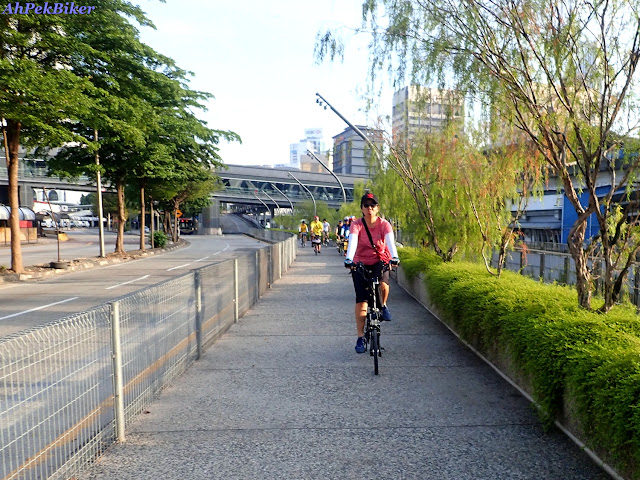 The short stretch in front is one of the nicest, it goes along pebble washed pavement with overhanging willow trees.
Ahead is a signalized crossing over Jalan Sultan Sulaiman; it has traffic light with bicycle icons specially for cyclists. The above Google Street View shows this crossing with the bright blue cycling lanes that leads back down to pathways along the river. 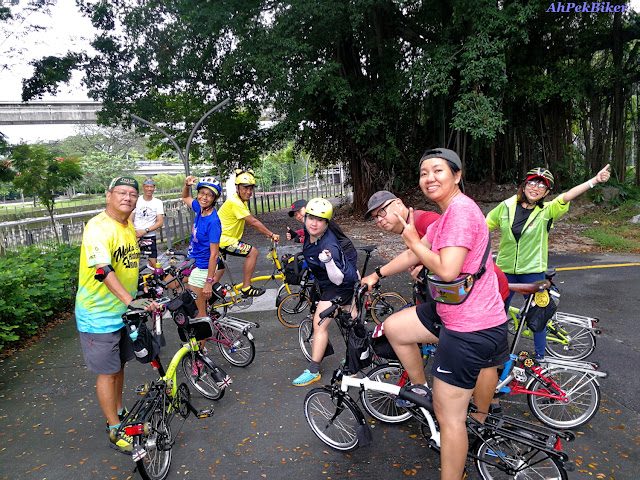 This is a good place to regroup, as there is a wide section before the slope down.

From here it slopes back down to lanes running along the Klang River one one side, and at certain stretches, the KL Monorail tracks on the other side. 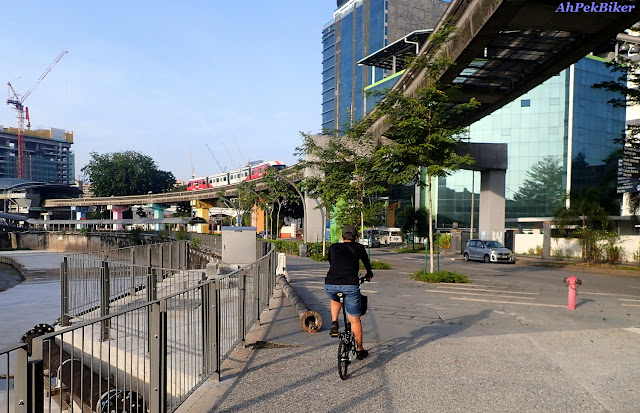