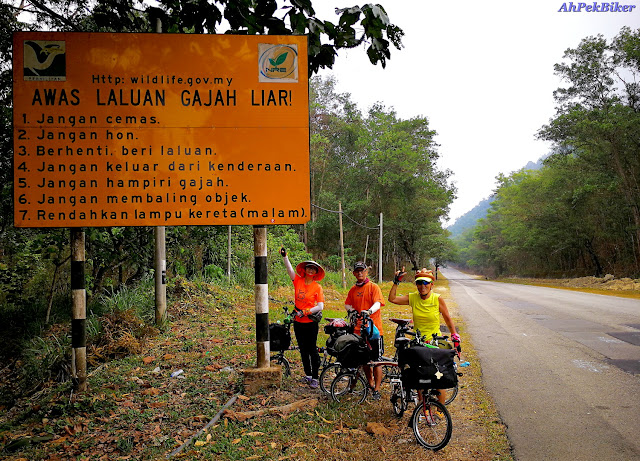 West Coast Peninsular Malaysia : 7th - 16th March 2019
Small Group Cycling Tour on a north-western central route of West Malaysia :
Kuala Lumpur>by ETS train>Kuala Kangsar>Lenggong>Gerik>Temenggor Dam>Gerik>Pulau Banding>by car>Kupang (Baling)>Kulim>Butterworth>by Penang Ferry>Penang Island>by Billion Star Bus>Kuala Lumpur.
(See day-to-day blogs for more detailed routes)
About six months ago we had cycled a route on the north-western coast of Peninsular Malaysia to be part of the CFAL 10 round Penang Island event.
Now a few of us will be going to attend another public event - the Gerik Temenggor Dam Fun Ride; and since many of us had not cycled around that locality, I thought why not gather a few friends and cycle to Gerik for the event! But we won't be cycling from Kuala Lumpur but instead will take a ETS train up to Kuala Kangsar to start cycling from there. It would be a ten-days tour that would cover three states along a route near to the central mountain range, and have us expose to the risk of meeting wild elephants!
Here is the tale of our adventure which we thoroughly enjoyed. (Note: further below are cycling tips, and write-ups on food and places along the route)

RIDE BLOGS
Below are the blogs of our cycling tour, click on the respective photos to read. It was a hot but interesting cycling tour, so come see our rides:

(Next... Perth, Australia? OR may I first stretch my legs a bit in Russia)

CYCLING TIPS / TRAVEL TIPS FOR THIS TOUR IN WEST MALAYSIA

Here's, some general tips on cycling in Malaysia, more detailed tips will be included in the day to day blogs:

1. Traffic Directions!
Malaysia's traffic is right-hand drive, so cycle on the left. Same thing applies when crossing the road, be careful and take note of the direction in which traffic is approaching from!

2. Route & Traffic Conditions
The route generally goes along quieter rural and plantation roads where traffic is light. It is only near or at the towns and cities that there is more traffic. Only some of the main roads do have emergency lanes to cycle on.
Generally the route is of medium toughness except for the one leading to the dam, and a tough stretch along the East-West Highway leading to Pulau Banding. The route from Kupang to Kulim, goes along the Baling-Gerik Highway; it's recommended not to cycle on this steep undulating highway as it is very tough and there is a likely hood of meeting elephants. The route from Baling to Butterworth was mostly on rural kampung and plantation roads.
Along the highways and the oil palm plantations, there were not much shade. The kampung rural roads do have some shade.

3. Bringing Bikes Onto Trains, Ferries & Buses
- KTM (Keretapi Tanah Malaysia) Peninsular Malaysia's rail service provider runs an electric train service called the ETS train from Kuala Lumpur to Padang Besar. Tickets can be bought on line via KTM website or Easybook.
Folded bicycles are NOT allowed on board even if bagged. So how did we get our bikes on board? Read the blogs to find out 😏.
- The Rapid Ferry runs a regular ferry service between Butterworth on the mainland to George Town on the Penang Island. One can ride straight into the ferry, just follow the motorcycle lane in. The fare is RM1-40 for each bicycle and it's rider, and tickets can be bought at the ticketing counter; fare is chargeable one-way fromt the Butterworth end.
- Intercity express bus between Penang and Kuala Lumpur can be bought on line via Easybook., but there is a need to change the online ticket to the respective bus company ticket at their ticketing counter at George Town (Komtar) or the Sungei Nibong express bus terminal. Boarding can be at George Town (Komtar) or the Sungei Nibong express bus terminal. We got our tickets for RM38 per pax and boarded at Komtar where a shuttle van sent us up to the main bus terminal. Bagged bicycles are allowed into the bus hold.

4. Communicating with Locals
For the uninitiated cycling in foreign lands can be a daunting experience, especially when one can only speak a smattering of the local language or if there is no common language to speak to each other (like English). Most Malaysians can speak fairly good English; but in the rural areas the locals speak only some rudimentary English, so learning some basic phrases in Bahasa Malaysia will be helpful.
This could be partly overcome by using translation apps like Google Translate. Do install this app into your phone and before you leave on your tour do some basic translation as it will be saved onto a list of recent translations.
And do install memory-resident translation apps into your mobile phone.

5. Staying in Touch
When travelling in a group it's important to be able to communicate with each other, especially if one got lost or just to share photos and moments. Pre-paid phone sim-cards are easily available from most phone shops in the main towns.

6. Places of Interest
Along the route were many places of interest, but the following should not be missed:
- a boat ride along the Temenggor Lake. We rented a boat with a guide at RM180 for a two hour boat ride. The ideal time to visit this lake is the bird migrating season in September.
- Tasik Raban, in between Kuala Kangsar and Lenggong.
- The coloufully lit parks at MBI Desa Ku in Kulim.
(See individual daily blogs for more places of interest).


Malaysia is a multi-racial country and a range of reasonably priced delicious food is easily available from most shops that usually open up till 10pm. For late night eats, many Mamak coffeeshops are opened 24 hours.


Except for the East-West Highway and the Baling-Gerik Highway, along most of the route food can often be found at road-side stalls or coffee shops. Also this hinterland is renown for good river fishes such as Tengalan, Sebarau, Tapah Fish, Jelawat, Patin, and even the rare Kelah Merah. (sometimes called the Emperau) Prices for the river fishes are much cheaper than at the main towns and cities; in fact some of these fishes may not be found at the main town and cities.
Penang has been rated as the best place in the world to eat by food writer James Oseland of the Saveur food and travel magazine; so do not miss out on Penang's renown street food.


(See individual daily blogs for what and where we ate daily).

8. Accomodations
Except for Lenggong & Pulau Banding, in most of the towns accommodations are easy to find, there are several hotels and home-stays around; use Google maps to search for these. We pre-booked accommodations via phone and there was no deposits required upon booking. Our accommodations cost averaged about RM90 per room per night.
(See individual daily blogs for our accommodations and pricing at that specific localities).

9. Weather
March is within the tropical dry season, which is a hot period. This year it was exceptionally hot and dry and we saw several bush fires along the way. And the worst part is this region is reputedly the hottest region of the Malay Peninsula.
Average daily temperature was 34°C and often it peaks up to 39°- 40°C. Fortunately it rained during the night for the first three days, making riding in the morning cooler. Other than that it was hot... very hot. To offset this we started early in the morning, around 6:30am and tried to end the day's ride by 2:00pm.
A useful weather forecast site is AccuWeather. For more detailed weather, including cloud cover and wind speed, use Weatherspark and Ventusky.

10. Navigation
Where data signal is available and strong, one can use Google Maps to navigate around. If the cycling options may not be available, just use the walking options.
In cases where data signal is weak or unavailable (like in remote rural areas), install MAP.ME into your phone. It's an off-line map app.
Alternatively, use a dedicated GPS unit like those from Garmin. However ensure that one install the Malaysia maps into the unit.
We plotted routes both on Google Maps and Garmin: Google maps are more up to date and some roads are not shown on the Garmin maps; on the other hand the Garmin GPS units becomes handy when data signal is weak or not available especially in the rural and plantation areas.

11. Service Your Bicycles & Carry Tools and Spares
Before leaving on your tour, it will be good to service your bike and bring along some spares like tubes, puncture patches, brake pads with the relevant tools.


You are at - Jotaro's Blog / AhPek Biker / Cycling Malaysia / Perak-Kedah-Penang / Cycling Kuala Kangsar To Gerik To Penang - The Temenggor Dam Tour
If you like this, view my other blogs at Jotaro's Blog
(comments most welcomed below. if you like this pls share via facebook or twitter)
Posted by Jotaro Zen at 2:24 AM