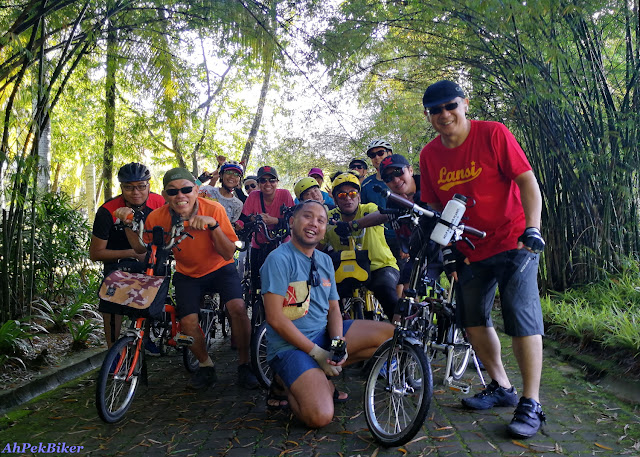 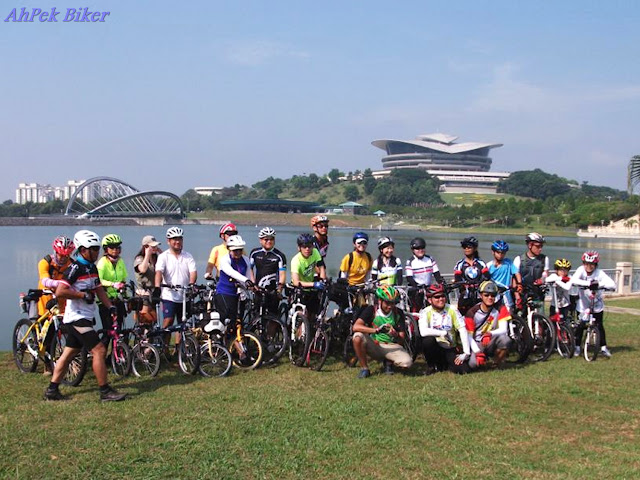 Putrajaya, the federal administrative capital of Malaysia, is a lovely place to cycle in. It offers many interesting and beautiful places to ride in, with nature bonding at its Wetlands, picturesque scenes along it's Lakeside and all mostly along dedicated cycling/walking paths.
One of my earliest ride was a 2013 Putrajaya Lakeside group ride (see above photo) where the safe dedicated paths were impressive, and the beautiful scenery enraptured us. 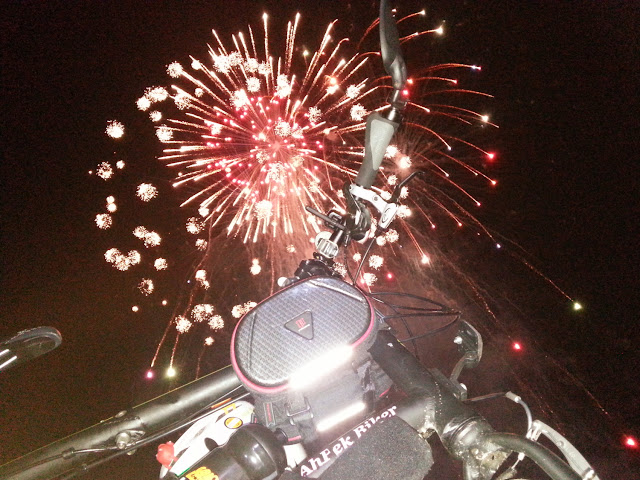 We even had a ride to admire the beautiful bridges of the city and a picnic ride in 2016. Many public cycling events were held there including one in 2012 ride that culminated with spectacular fireworks to usher in the new year!
This time round we will not be just riding at its lovely Lakeside, but will also cycle along its Wetlands. It's a place I have heard of many times but have not been to before, so it will be any eye-opener for me!
THE RIDE
Cycling Route: Ayer@8>Seri Perdana Bridge>Putrajaya Lake Club>Putrajaya Wetlands>Putrajaya Lake Recreational Centre>Putrajaya Botanical Gardens>Dataran Putra>Seri Gemilang Bridge>China-Malaysia Friendship Garden>Seri Wawasan Bridge>Ayer@8.
This is an interesting route that goes through the scenic Wetlands and Lakeside of Putrajaya. It's a relatively flat route that explore nature, also goes along the scenic Lakeside, and pass several beautiful bridges and buildings.
Cycling Distance Covered : 31.91 km.     |     Level: Medium 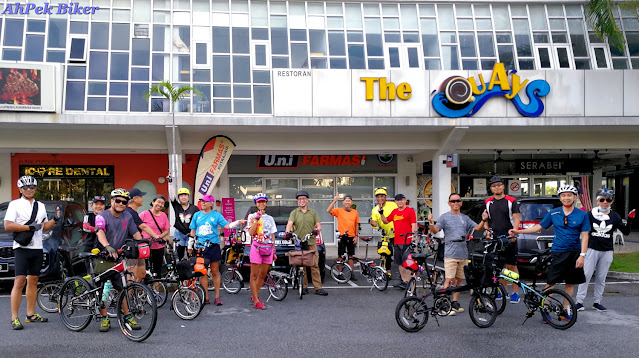 A good place to kick-off the ride is at Ayer@8; here there are several good eateries for breakfast before the ride, and perhaps also for lunch afterwards.
From here, we took a short path down to the Putrajaya Lakeside cycling/walking lanes that will lead us to the Wetlands. But before we proceed below are maps of the Wetlands to give a clearer picture and a better understanding of the place the we will be heading too.
Putrajaya, the new administrative capital of Malaysia (established in 1999), is a well planned city that brings the country into the 21st Century, Covering 49 km2 (19 sq mi). Planned as a garden city and intelligent city, 38% (18.62 km2) of the area is reserved for green spaces in which the natural landscape is enhanced. This incorporated a network of open spaces and wide boulevards. And one of the best green and largest areas here is the Putrajaya Wetlands (Malay: Taman Wetland) which includes a Wetland Park (138 hectares) and the wetland areas (1977 hectares) totaling 2155 hectares.
With many species of fauna and flora, the place looks very green and natural, but the odd thing is IT IS not natural and relatively new!
In the early 1990s, when the designers of Putrajaya decided that they wanted to build the city around a man-made network of lakes, they realized that they would need an efficient filtering system to prevent the lakes from becoming polluted and stagnant. Rather than opt for an artificial filter they instead created a freshwater wetlands, said to be the largest one in the tropics. With this, Putrajaya Wetlands are considered Putrajaya's kidneys that play an important role in ensuring the ecosystems in Putrajaya are balanced through natural water filtration of two major rivers flowing into Putrajaya, the Sungai Chua and Sungai Bisa along with three other rivers. The Wetlands is now also a wildlife sanctuary which attracts a huge variety of animals to the combined terrestrial-aquatic wetland environment and have become a popular eco-tourism destination. 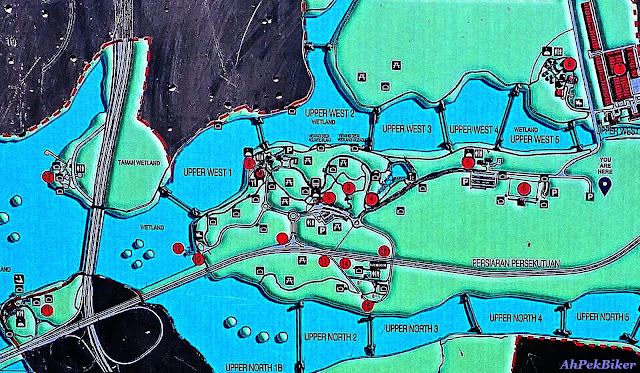 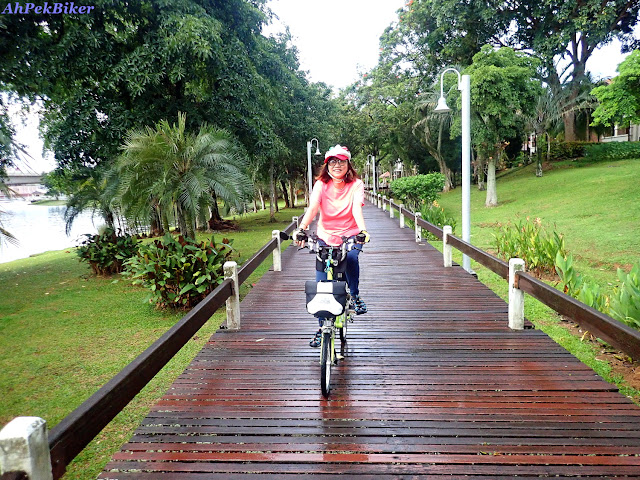 After a short distance along the Lakeside, we were soon riding on timber boardwalks running along the lake. The timber slats here are nailed down, but it's best to avoid cycling along the center where the will be a row of embedded nails..... just in case any does stick out over time. Here, it's like cycling along a green corridor as there are buffer zones to the lake on one side and another buffer to the houses on the other side. 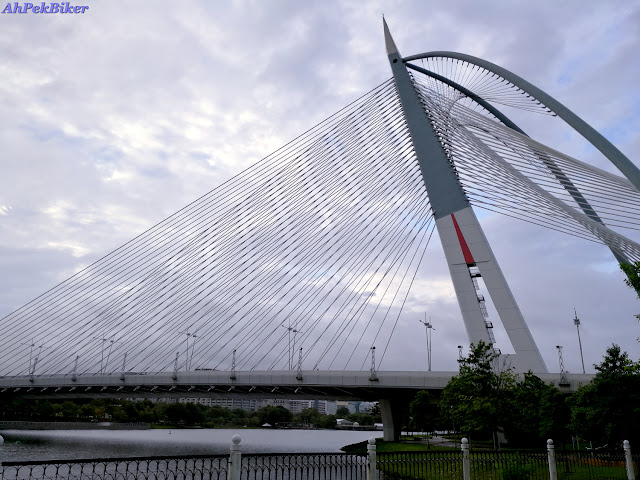 The board-walk led us onwards to concrete-paved pathways, along the way we rode below the Seri Wawasan Bridge with the rising sun in the background, it is aptly named as "wawasan" is Bahasa Malaysia for "vision". This is a beautiful bridge, emulating a Kris pointing skyward, leading the nation ahead. No worries, we will later ride on the bridge itself during our return loop. 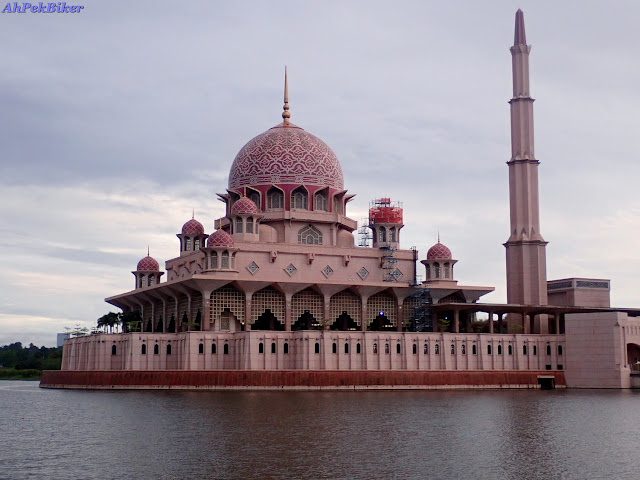 Here too was a good view of the Putrajaya Mosque looking like it's floating on the lake! 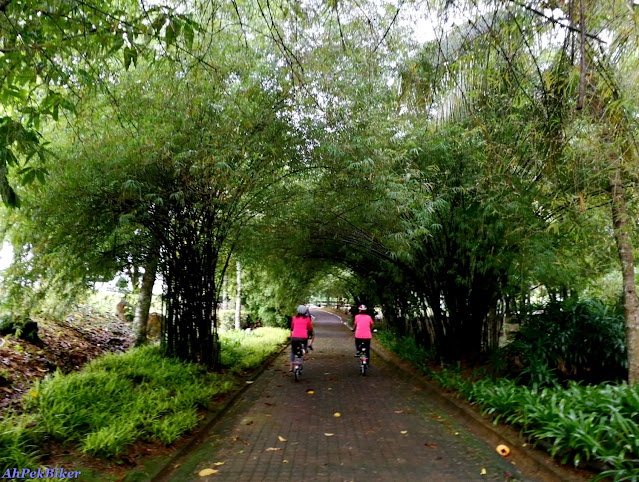 The lake-side path led us pass the Putrajaya Lake Club and then through the nice residential area of Precint 10.
About 1-1/2 km. ahead, near Seri Perdana (the Prime Minister's Residence), the lakeside path ends as it does not go around the residence, and we had to head out to the main roads to loop back to the lakeside further ahead. But it's a blessing in disguise, for the path leading out is lined with bamboo groves and are shady. This is a lovely place for nice photos, and here we met another group of friends; quickly took a group photo before each going our own way (see top-most photo too). 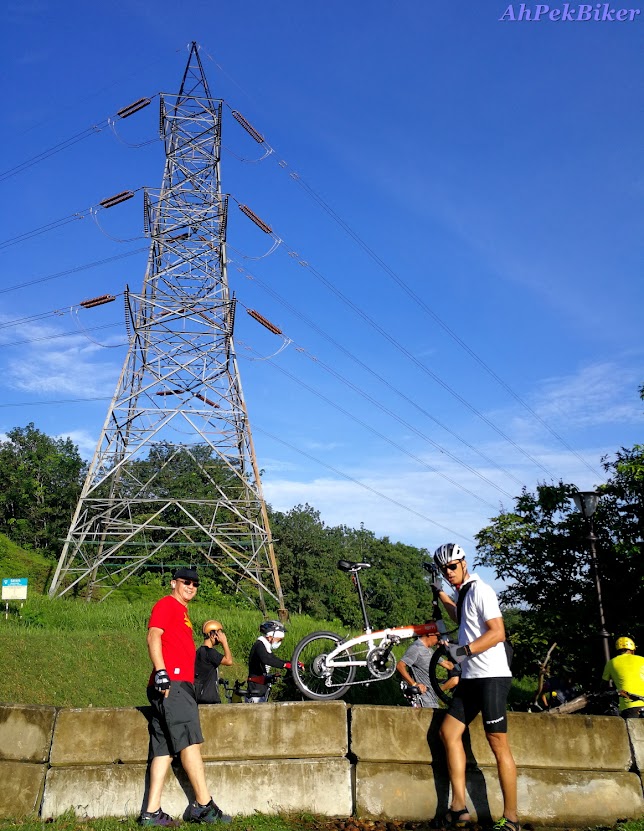 It's onto the main roads, going along Persiaran Seri Perdana (on parallel cycling paths) and going towards Precint 11 to head for the Wetlands. At Jalan P11 A 6/1, there's a pathway (entry location is at GPS: 2.95926, 101.68952) that leads down to the Wetlands, presently it's blocked with concrete blocks (probably to prevent motorcyclists from entering), so some lifting of bicycles is required.
Wonder what lies ahead? 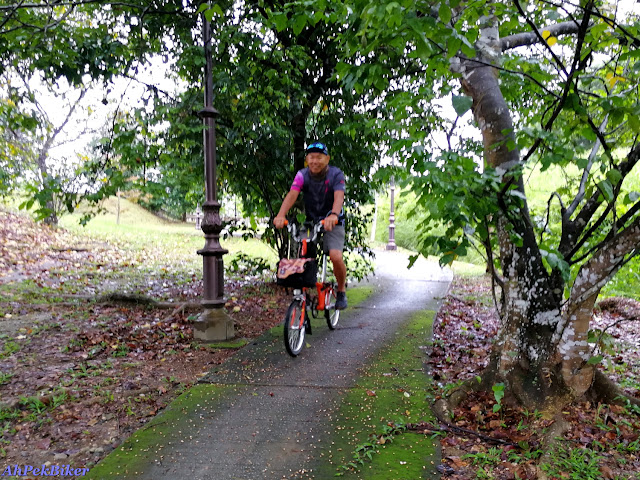 Ahead was a narrow paved-pathway that slope downwards.
With nice lamp-posts, this must have been a properly planned access, too bad access is not easy because of the barricade.

Below were paths that led us through the first part of the Wetlands; some were sandy tracks others were tarred, but all went through very green landscaped surroundings. There are even sandy tracks that goes along the bunds that cross the wetland lakes. 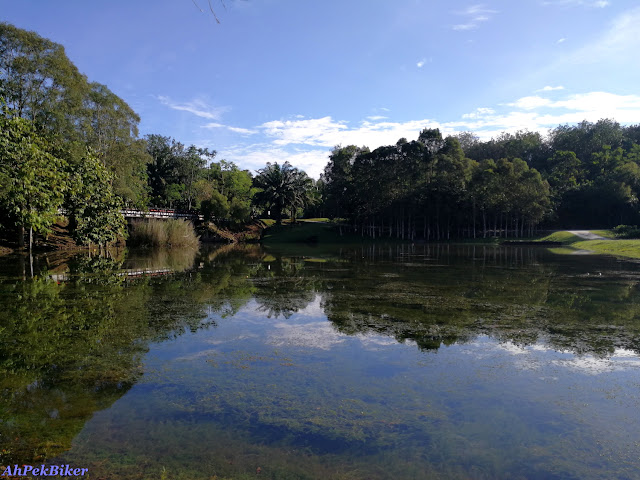 The place is so serene, and the wetlands have done their natural filtration well; the water is clear and reflects the sky beautifully. 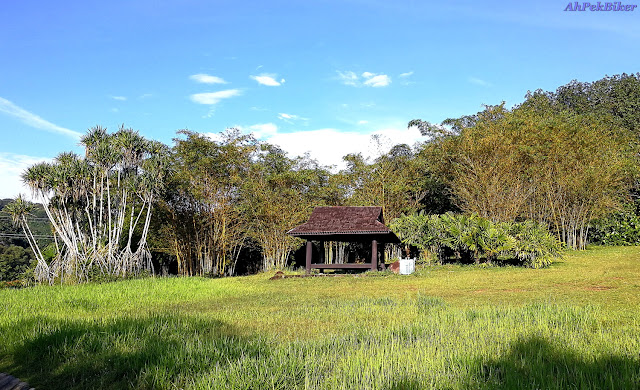 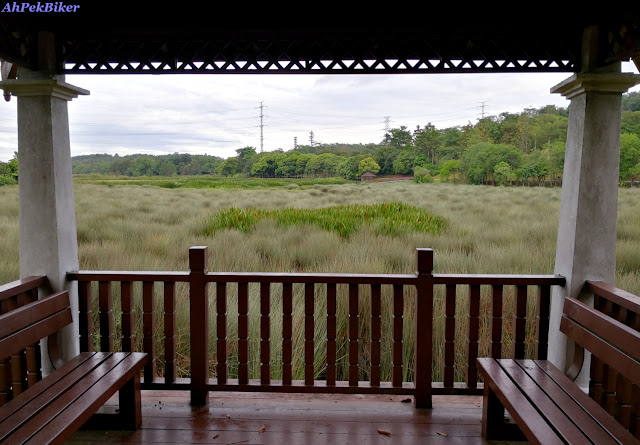 ..... to marshes with swaying reed grass.
Resting shades are strategically positioned to take advantage of the scenic environment. 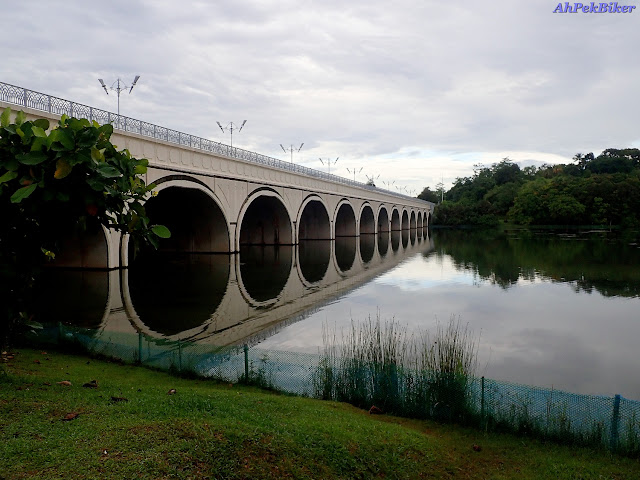 Crossing one of those sandy bunds and taking a left, led us to this awesome sight. This unnamed bridge with multi-arches is a favorite with photographers as the calm water of the lake reflected it beautifully. On top is Persiaran Persekutuan, one of the main roads linking Putrajaya to the SKVE (South Klang Valley Expressway). Many driving above on this road link are oblivious to this beauty below. 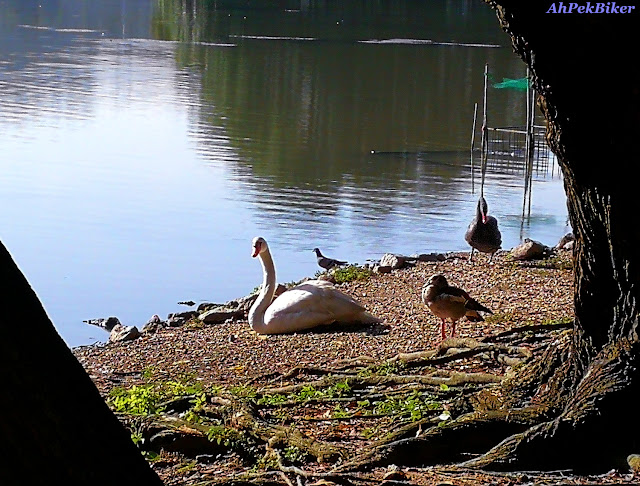 At the left-bottom corner of this bridge was one of the best part of the Wetlands: it's the Swan Lake, it has nothing to do with the ballet of similar title, but its beauty is very admirable all the same. A swan could be seen sitting serenely at one corner.

This place is a must stop, other than the white swans, there were also white geese, egrets, colorful eider ducks .....
..... and the rare black swan!
These black swans stood out conspicuously and reminded me of the iconic Black Swans of Perth that we saw while cycling around Lake Monger in Perth. 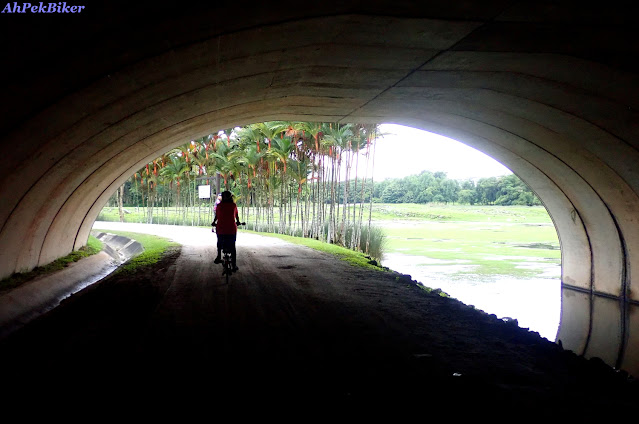 Not all the arches of the bridge is over water, the left-most arch has a wide trail that led us to the other side, and going through it gave us a peek of more wet greenery ahead.

Swinging right we went across a sandy bund; on one side was seen these Yellow-billed Storks wading in the waters and while others patiently roosted on some railing. 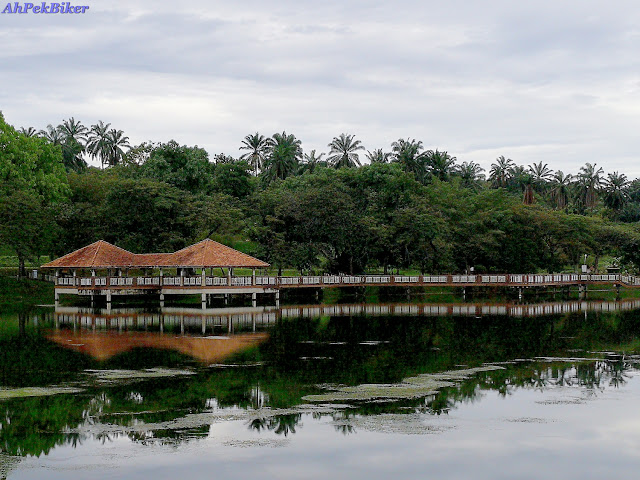 Crossing that sandy bund takes us out of the Wetlands and onto Precincts 1 and 2, the Core Island lake district of Putrajaya.
We cycled by the Putrajaya Lake Recreational Centre (Pusat Rekreasi Air Putrajaya), there visitors can rent bicycles, rent canoes/kayaks, or even book a PUtrajaya lake cruise. Further along was the Lakeside Rest Place, a nice and scenic place to stop for views and photos of the Putrajaya Lakeside. 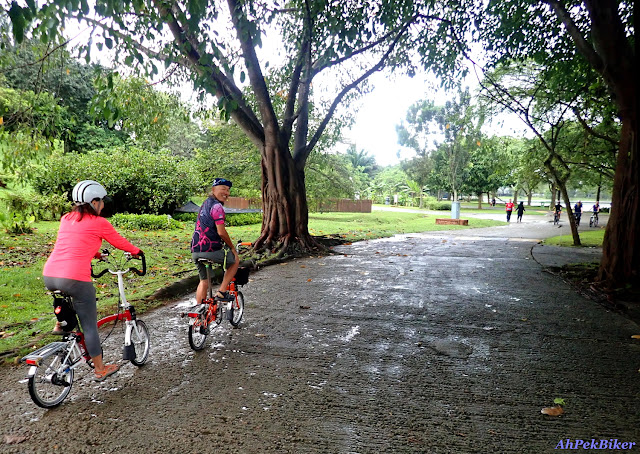 No more sandy trails here, it's onto tarred and concrete pathways, starting with a ride on rough broom-swept paths slightly away from the Lakeside. Although we were out from the Wetlands, it was still very green here, with shady trees and much other flora around. 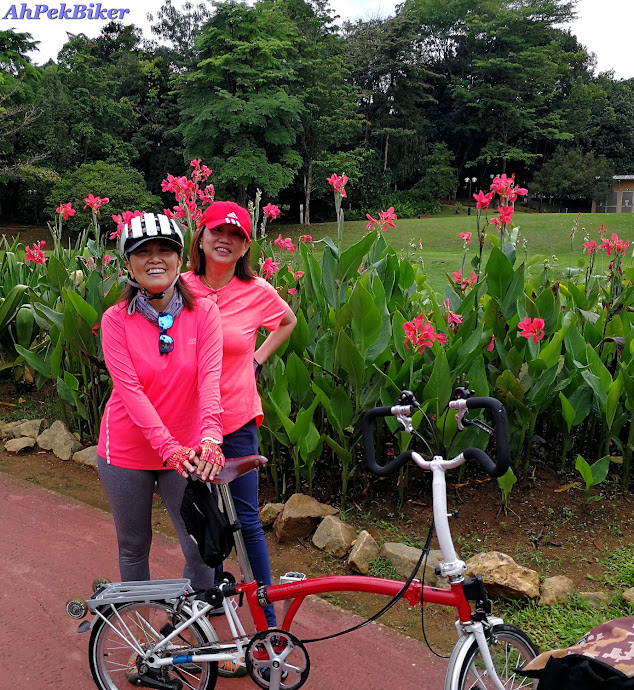 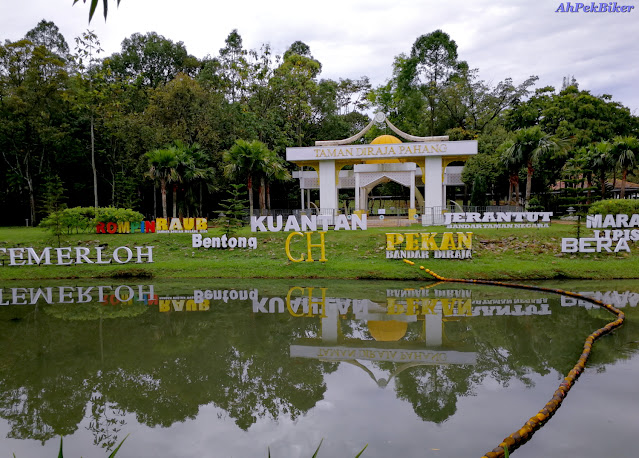 Just outside the botanical gardens was the Taman DiRaja Pahang (Pahang State Garden), with different sections dedicated to respective towns of Pahang, the largest state in Peninsular Malaysia.
Not to be missed too is the nearby Moroccan Pavilion - its Moorish architecture reminded us of the Alhambra which we visited during a 2019 Cycling Tour of Portugal & Spain. Unfortunately, it was closed for upgrading, so no photos to show here. 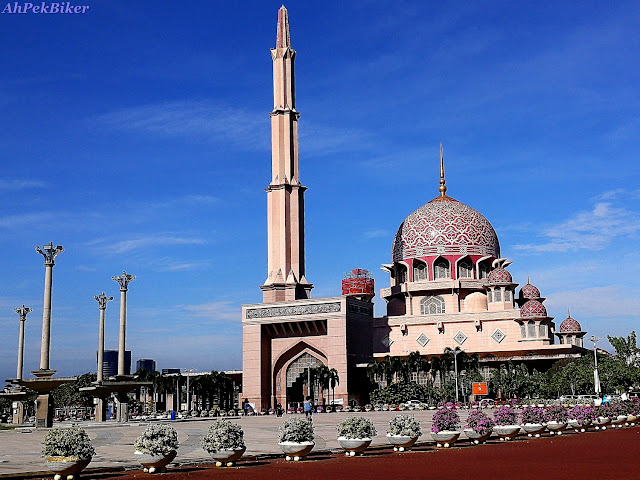 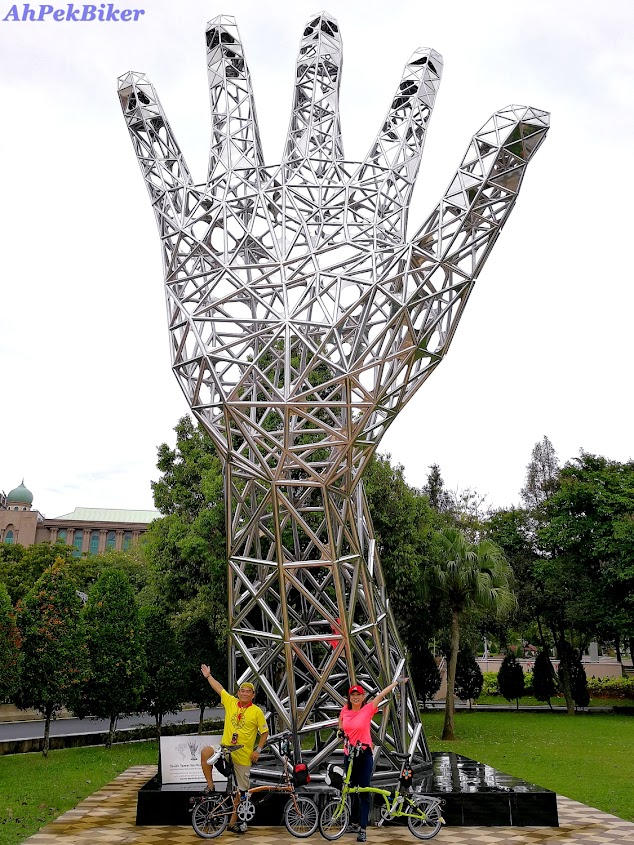 A quick stop at the nearby "Open Hand Sculpture", this is an International Anti-Corruption Excellence award presented by His Excellency Sheikh Tamim Bin Hamad Al Thani, the Emir of Qatar. 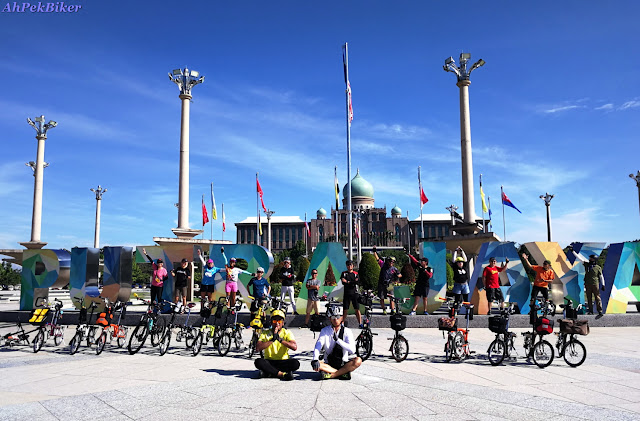 With giant letters spelling out "PUTRAJAYA", Dataran Putra is a memorable place for photos, taken either with the Putrajaya Mosque in the background. Alternatively, like us, take a group photo with the Perdana Putra, the Malaysian Prime Minister's Office, in the background.

Continuing onto the wide Central Boulevard  of the Core Island, we admired the  many impressive office and government buildings here, such as:
1. The Suasana PjH Putrajaya; a new business and retail hub.
2. Ministry of Finance Complex; a distinct curve building housing housing the Malaysian Ministry of Finance,
3. Perbadanan Putrajaya Complex,
4. The Palace of Justice, which houses the Federal Courts of Malaysia & The Justice Museum.

We reached the far end where the Seri Gemilang Bridge, an impressive ceremonial bridge which was designed to have a stately look, even the lamp-post bases have crafted motifs
From here, we decided not cross the bridge to climb up to the Putrajaya International Convention Centre (PICC) ..... 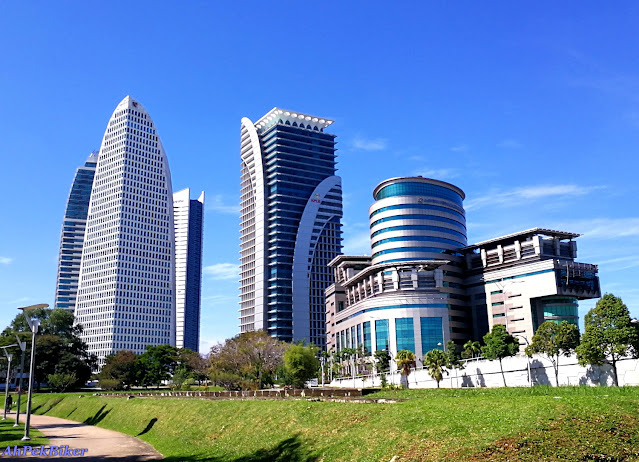 ..... but instead looped back at Dataran Gemilang, where there were tall attractive office blocks housing more government departments.

Looping back from there along the lake-side, in one of the photos above, the PICC can be seen across the lake, to the left,

Enroute back, another stop - the China-Malaysia Friendship Garden;.This garden is a joint effort between the Dongguan People's Association for Friendship with Foreign Countries (DGPAFFC), Perbadanan Putrjaya (PPJ) and Malaysia-China Friendship Association (PPMC).
To reflect the building's Chinese architecture, almost all the building finishing material were brought in from China, tiles, roof tiles, etc. Even the elaborate roof timber structure were brought in in dismantled pieces. 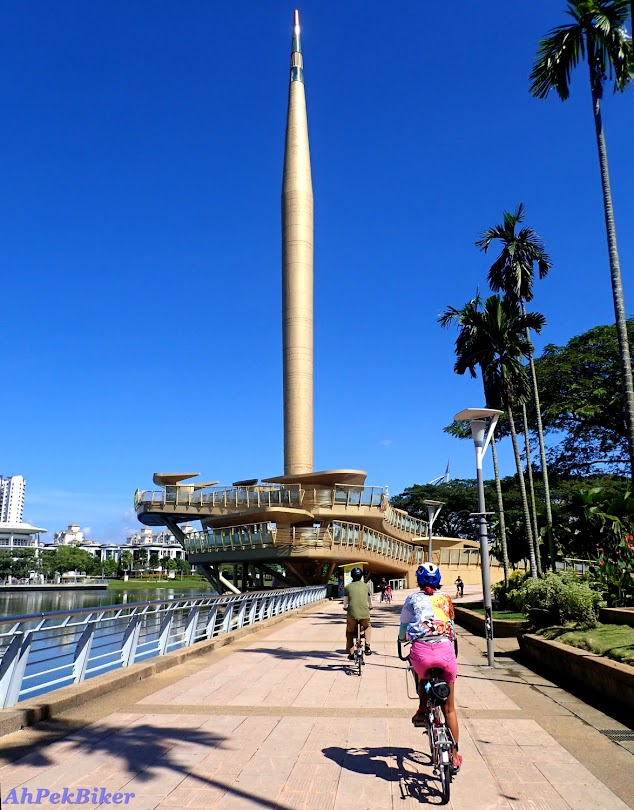 Over a couple of weekends, we rode at this area on more or less the same route. For our first time, the return leg was via the Taman Wawasan Putrajaya with slight detour to the Seri Bistari Bridge (see map above).
The second time's return leg was a shorter one that took us pass the Millennium Monument (seen in above photo). "This is a 68m high column which from a distance it looks like a giant pencil standing on end but it was designed to be in the shape of the hibiscus flower when viewed from above. A ramp leads upwards along which are a series of engraved glass panels which trace important milestones in Malaysia's history.  There is also a time capsule concealed in the base of the monument containing a message from former Malaysian Prime Minister, Tun Dr. Mahathir bin Mohammad which was supposed to be be unearthed in the year 2020." But probably because of the world-wide Covid-19 pandemic, this has not happened. 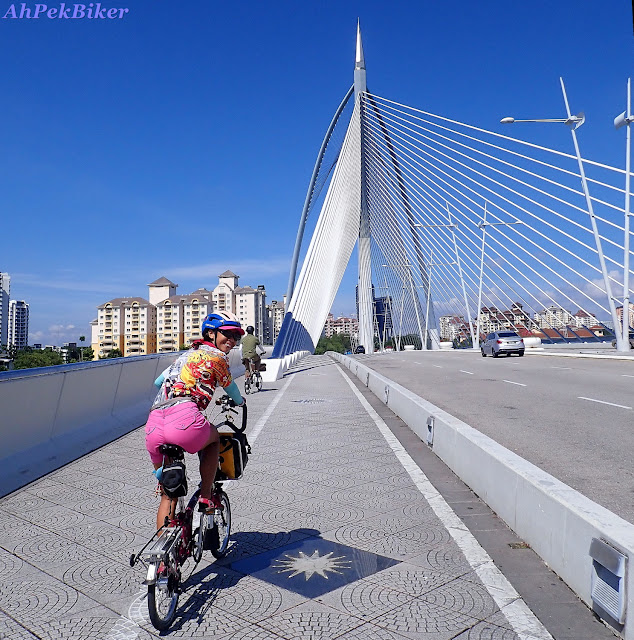