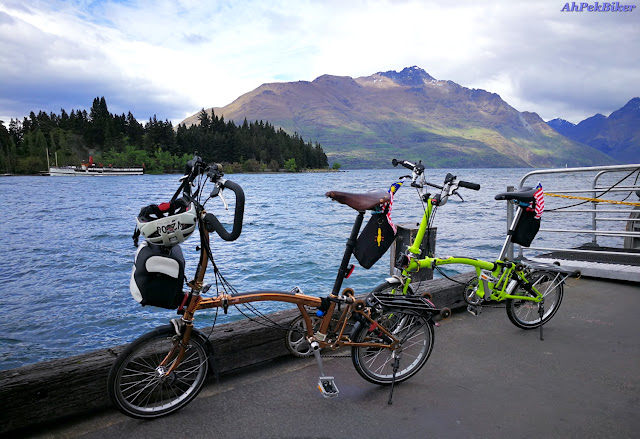 Close to four years ago, together with some buddies, I went on a cycling tour to South Island of New Zealand; (called Aotearoa, the Land of the Long White Cloud by the Māoris) and really enjoyed the beautiful place with it's scenic bright blue lakes and snow-capped mountains. This year I am making a trip with my better half to visit relatives in North Island (Te Ika-a-Māui), and took the opportunity to do a bit of cycling. It turned out to be more than a just bit of cycling as we cycled in several places; although some of the trails were not easy, we thoroughly had good fun there amidst the beautiful scenery. It was a multi-mode cycling tour, as we did road trips & bus tours to further away places, and even on a short flight hop over to Queenstown in the South Island (Te Waipounamu).

Here is the tale of the adventure which we had. (Note: further below are cycling tips, and write-ups on food and places along the route)

RIDE BLOGS
Below are the blogs of our cycling tour, click on the respective photos to read. It was a great cycling tour, so come see our rides:

Here's, some general tips on cycling in New Zealand (Aotearoa), more detailed tips will be included in the day to day blogs:

1. Traffic Directions!
Traffic in New Zealand is right-hand drive, so cycle on the left. Same thing applies when crossing the road, take note of the direction in which traffic is approaching from!
Some New Zealanders can get quite impatient when it comes to driving. So do not hog the road, stay within your lane and put on your indicators when turning or changing lanes so as not to irate them.

2. Route & Traffic Conditions
New Zealand has fairly well developed cycling routes that run in the cities, town, villages, and country side. Some of the cycling trails are on dedicated cycling lanes, some on shared lanes with pedestrians or other traffic. Some are on paved tracks while others are on gravel or earth trails, and they go through fairly busy towns, green forests and bright blue lakeside.
The New Zealand Cycle Trail site provides an interactive map of exciting journeys on 2,500km of trails suited to everyone from sightseeing easy-going riders, to hardcore mountain bikers up for a challenge.  New Zealand law requires cyclists to wear helmets while cycling.

3. Weather
The best time to cycle in New Zealand is during late spring our early autumn when the weather is very amicably cool without being freezing or too hot. Daytime temperatures averages from 16°C to 19°C. And as always, the further North you go the higher the average temperature will be. Spring in New Zealand is full of surprises. The weather is a mixture of crisp sunny days and cooler temperatures with occasional spring showers.
Wind speed does get pretty high, especially nearer the coastal areas, and can reach up to 50 kmh-70 kmh.
Useful weather forecast sites for the New Zealand are the New Zealand Met Service and AccuWeather. For more detailed weather, including cloud cover and wind speed, use Weatherspark and Ventusky.

4. Travelling By Plane And Bringing Bikes Onto Planes In New Zealand
From Kuala Lumpur, we flew into Auckland by Air Asia via the Gold Coast in Australia. The odd thing is that the airline charges for checked in luggage and sports equipment twice - once for the Kuala Lumpur to Gold Coast leg, and another time for the Gold Coast to Auckland leg and then vice versa for the return flight. Click here for AirAsia guideline and fee on sports equipment. The fee differs for short-haul and long-haul flights.
We booked 20kg sports equipment each for the outgoing and return flight. Our Brompton bicycles were packed into Dimpa bags, and our cycling gear (jerseys, zippable pants, etc) with shopping purchases were put into a spare Dimpa Bag.  Air Asia allows cabin luggage of two pieces (a normal cabin sized bag with another smaller bag); both must not weigh more than a total of 7kg. They are very strict on this policy and will charge for any weight beyond this. A tip, simple but important. Ensure that you DO NOT carry your tool kits or any long/sharp metal objects in your hand luggage. Put your tool kit into your checked-in bike bags. I often seen friends forgetting about this, only to have their tools confiscated at the security checkpoints.
From Auckland we flew to Queenstown by Jetstar. For best prices register for their Price Watch stating indicative time of travel and destinations. Depends on the class booked, no checked-in luggage or limited checked in luggage are included. Sports equipment measuring no more than one metre on the longest side and not heavier than 32kg. are treated as part of checked in luggage, and as such there is no necessity to purchase a separate sports equipment luggage as long as one's bicycle is bagged and within their dimension and weight guideline.

5. Bringing Bikes Onto Ferries
Ferries in New Zealand allow full size and folding bikes (without being folded) on board without additional charges. Some ferries do have bicycle racks for securing the bikes; otherwise secure your bicycles at locations indicated by the crew.

6. Bringing Bikes Onto Buses
We found that our folded bikes could be brought onto the intercity buses, but should be bagged and put into the passenger hold.
The local ORbus serving Queenstown and the Otago Region allows folded bikes on board without being bagged. Click here to see a forum discussion on bringing bikes onto buses. If one travels frequently by bus at the Queenstown locality it would be good to get their GO Cards; the card cost NZ$10 and can be used simultaneously by two persons. They can be purchased from the driver and credit can be bought together and topped up then. With the card fare per pax within the region covered is NZ$2/- per pax, otherwise it's NZ$5/- if paid by cash.
In Auckland, folded bicycles can be brought on board without additional charges. Fares can be paid by cash.
Certain buses allow full sized bikes to be strapped to the front of the bus, checked with the locals or bus company.

7. Communicating with Each Other
When travelling in a group it's important to be able to communicate with each other, especially if one got lost from the rest. Vodafone prepaid phone cards can be bought at the Vodafone stall located just outside the Arrival Hall. We got ours from a promoter at the shopping arcade within the arrival hall, with each of us getting the prepaid mobile cards at NZ$25 (inclusive of GST) which came with 1.5Gb of data lasting 30 days. Also included were 200 minutes for local calls and calls to selected countries, including Malaysia. This also includes text messages to the selected countries. There's also free chat data when using FaceBook Messenger and WhatsApp chat.
Most hotels, motels, home-stays, restaurants, and airports have free Wifi; do note that these free wifi may not be secure and registration could be required. But one can save on one's mobile data by using these especially for uploading or downloading videos.

9. Accommodations
Accommodations in New Zealand can be somewhat pricey, but they are some budget motels/hostels around. Most of the accommodations allowed us to bring our bagged foldies into the room.

10. Food
There is no lack of good food in the country. Asian and Malaysian food can also be found in most large cities.
One should not miss the following:
- fresh beef and lamb,
- Green-lipped mussels, and
- Fergburger, one of the best burgers in the world.