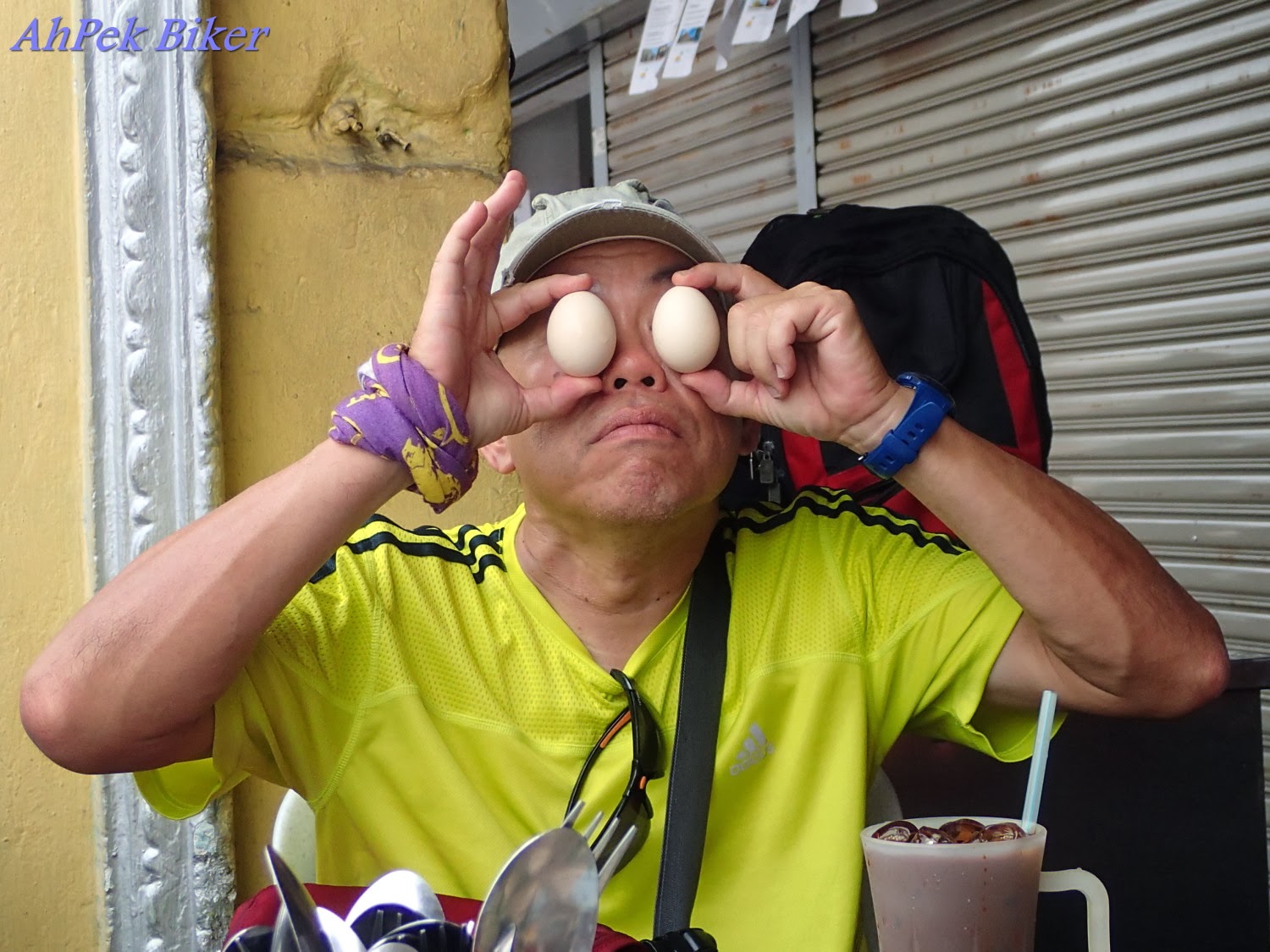 Route Recommendations :
1. Do try to keep left as much as possible when cycling at the motorcycle lanes of the Federal Highway; motorcycles goes zooming by fast.
2. Some of the tunnels at the motorcycle lanes are dark and have pot-holes, do be careful.
2. The pedestrian bridge adjacent to the Jalan Jambatan Kota gives cyclists a safe passage to cross the Klang River. It also offers a place to stop to admire the surrounding scenery.
3. Do forget to bring the bag for your bike in order to ride the train. Sometimes they allow bikes in without bagging, but don't take the risk. 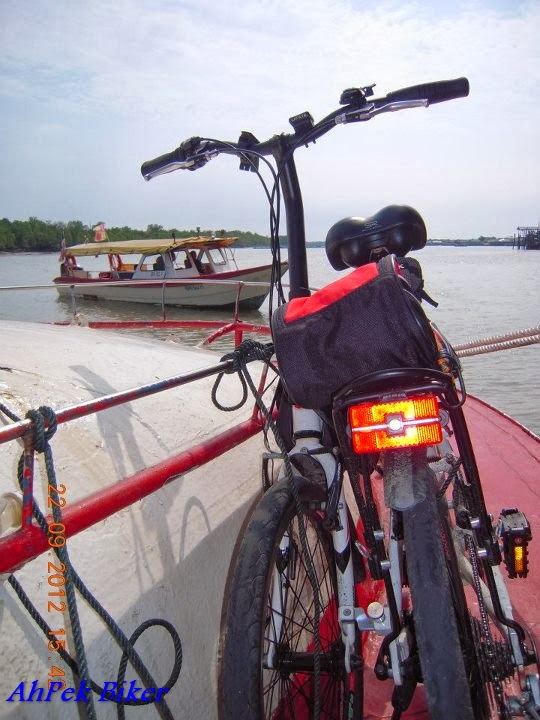 IT'S ANOTHER RIDE TO HUNT FOR FOOD!
This time round it's for Bak Kut Teh, and where else to go to but Klang, the place most famous for Bak Kut Teh. Many of us have cycled from Kuala Kuala Lumpur to Klang. In fact one of my earliest ride was on this route (... see World Car Free Day blog). Since then, some friends and I have rode down to Klang several times and had had the Bak Kut Teh at Kee Heong in Taman Eng Ann, Klang. But this ride (organized by Tailim of the hApPy HaPpY blogs) will be one of the most memorable for most of us as we did have loads of fun along our journey.

Ride Route: Sultan Abdul Samad Bldg>Brickfields>Federal Highway Motorcycle Lane>Klang>Jalan Templer Station (by train)>Old Klang Road>Brickfields>Sultan Abdul Samad Bldg
The physical route was a straight forward one, not much twists or turns for this AhPek to lose his direction. The section along the Klang River side was interesting. A simple bridge in Klang Town turned out quite fascinating. 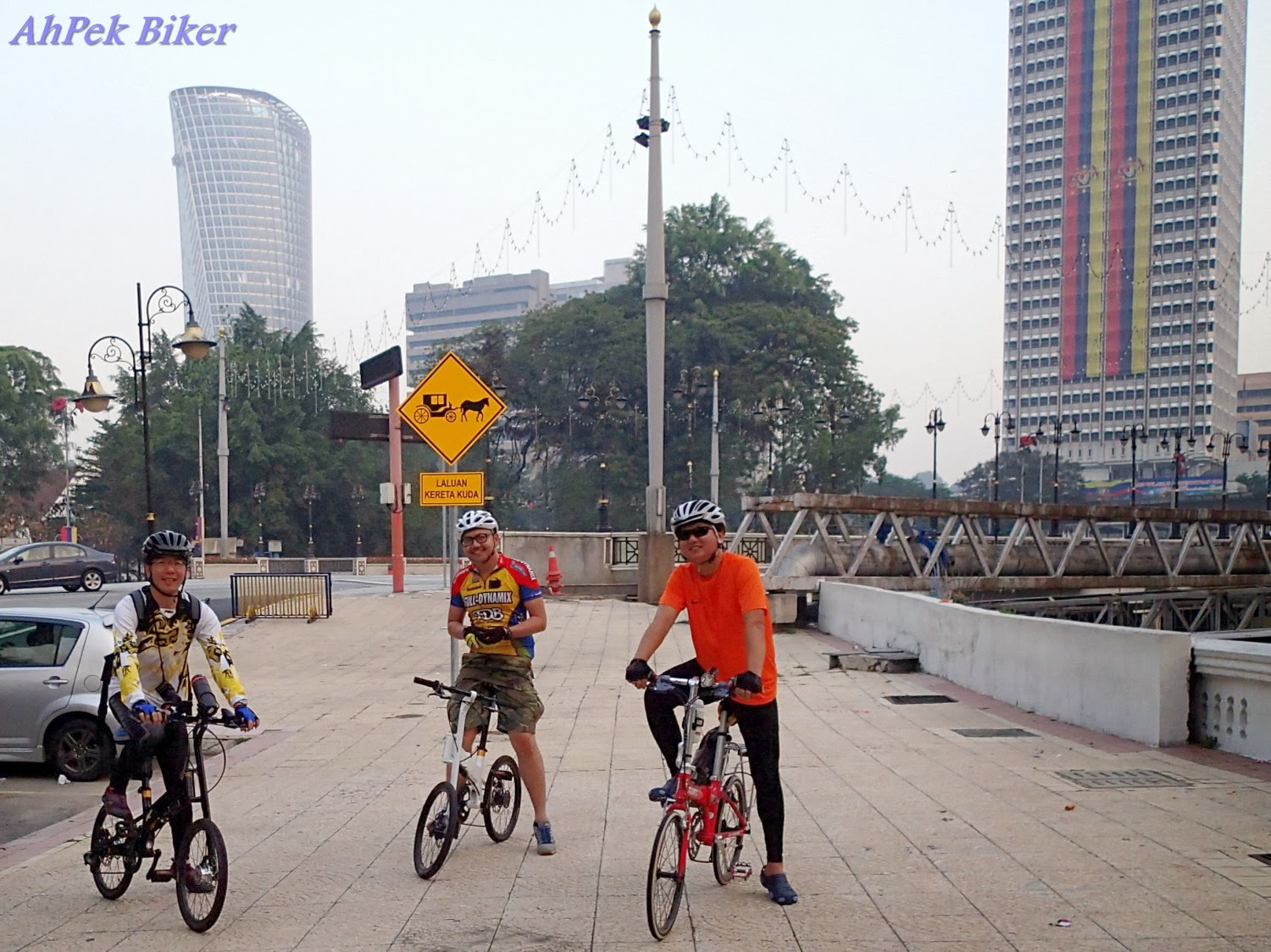 This time round we started from the Sultan Abdul Samad Building; they are some car parks at Jalan Mahkamah Persekutuan behind the building. We were joined by Michael, who had returned to his biking hobby after a lapse of a couple of years. Welcome Michael, great to have you riding with us. 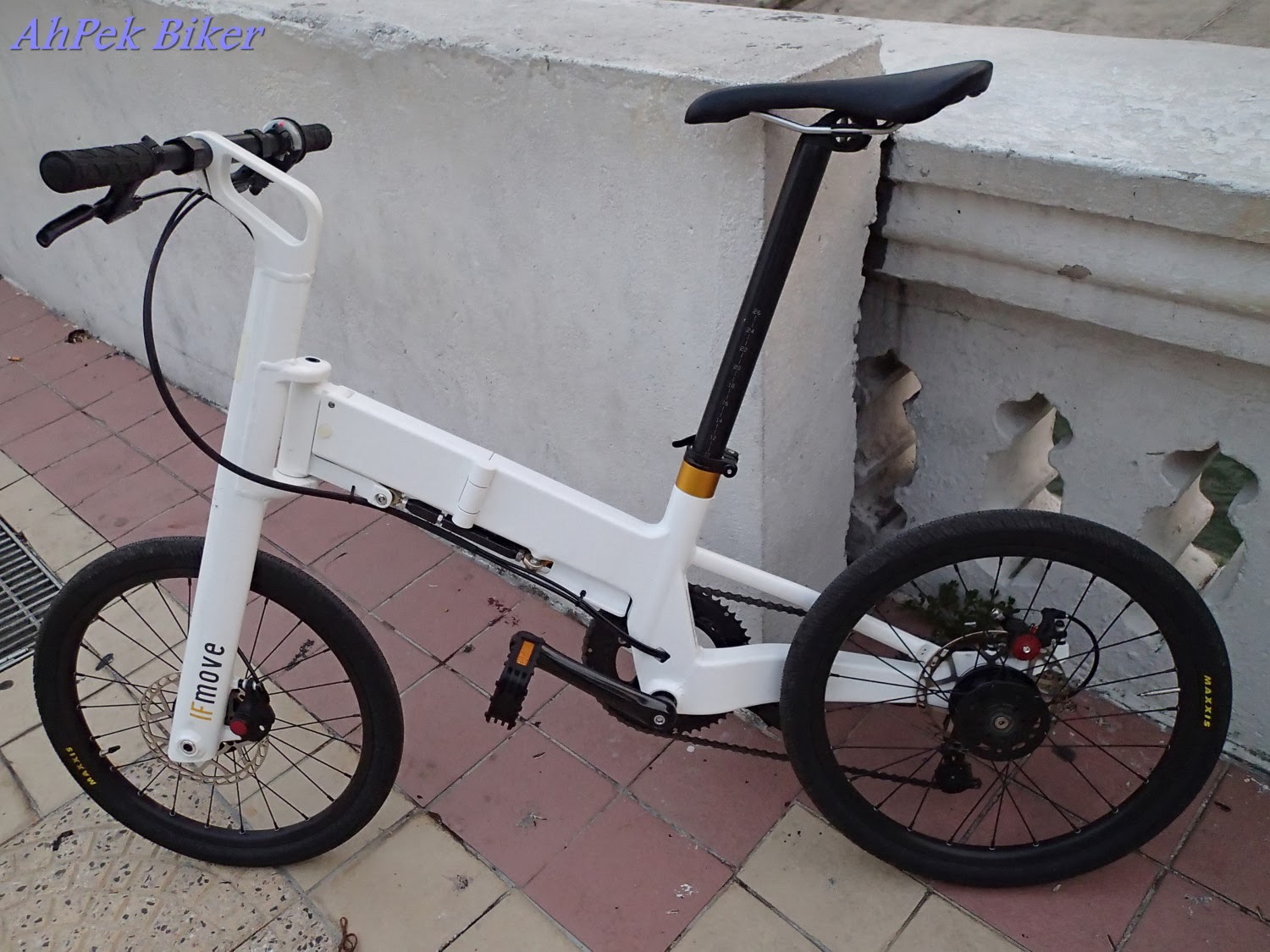 He was riding a IF Move; this is a cool looking bicycle that have mono-shaft forks at the front and rear. 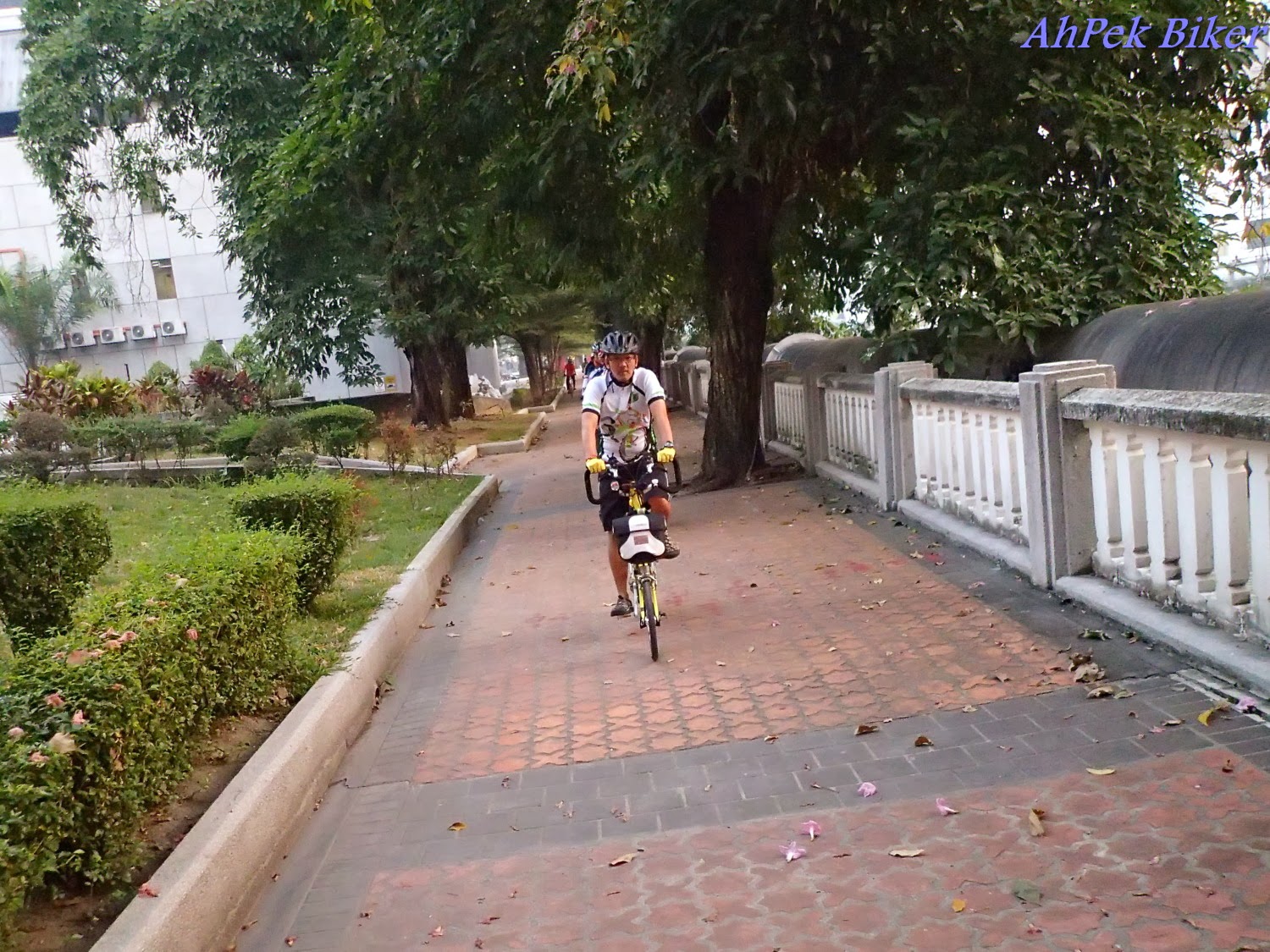 From the start point, we used the shady pedestrian walk-way adjacent to the Dayabumi Complex to head for Brickfields via Jalan Tun Sambanthan. This walkway also run parallel to the Klang River. Perhaps we should just jump into the river and take a boat ride down to Klang; but then where will be the fun there? - i.e. no cycling. 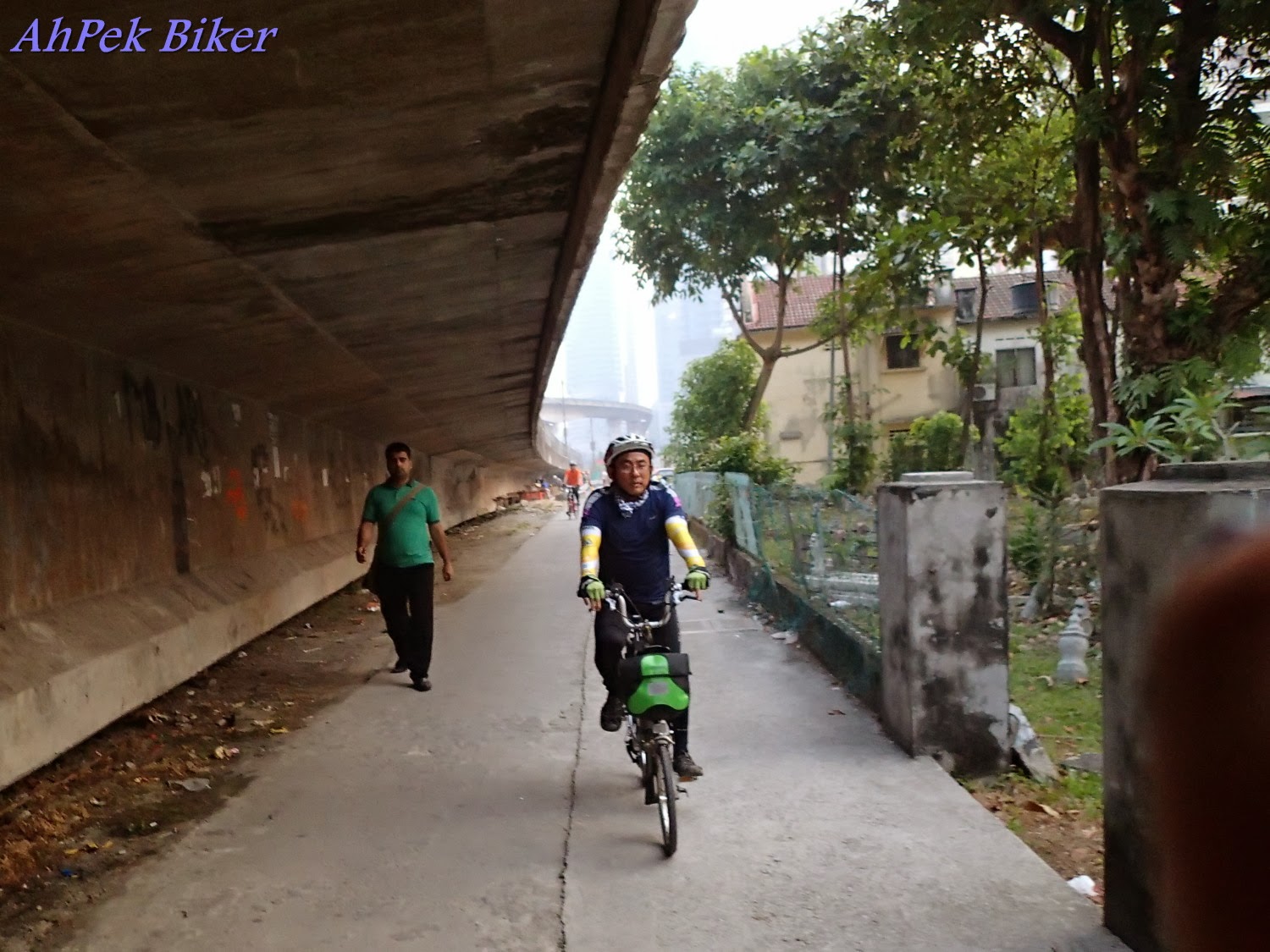 At the Ang Seng area of Brickfields we used our favourite and interesting short-cut (that runs partway below and adjacent to train track beams) to reach the motorcycle lanes of the Federal Highway. 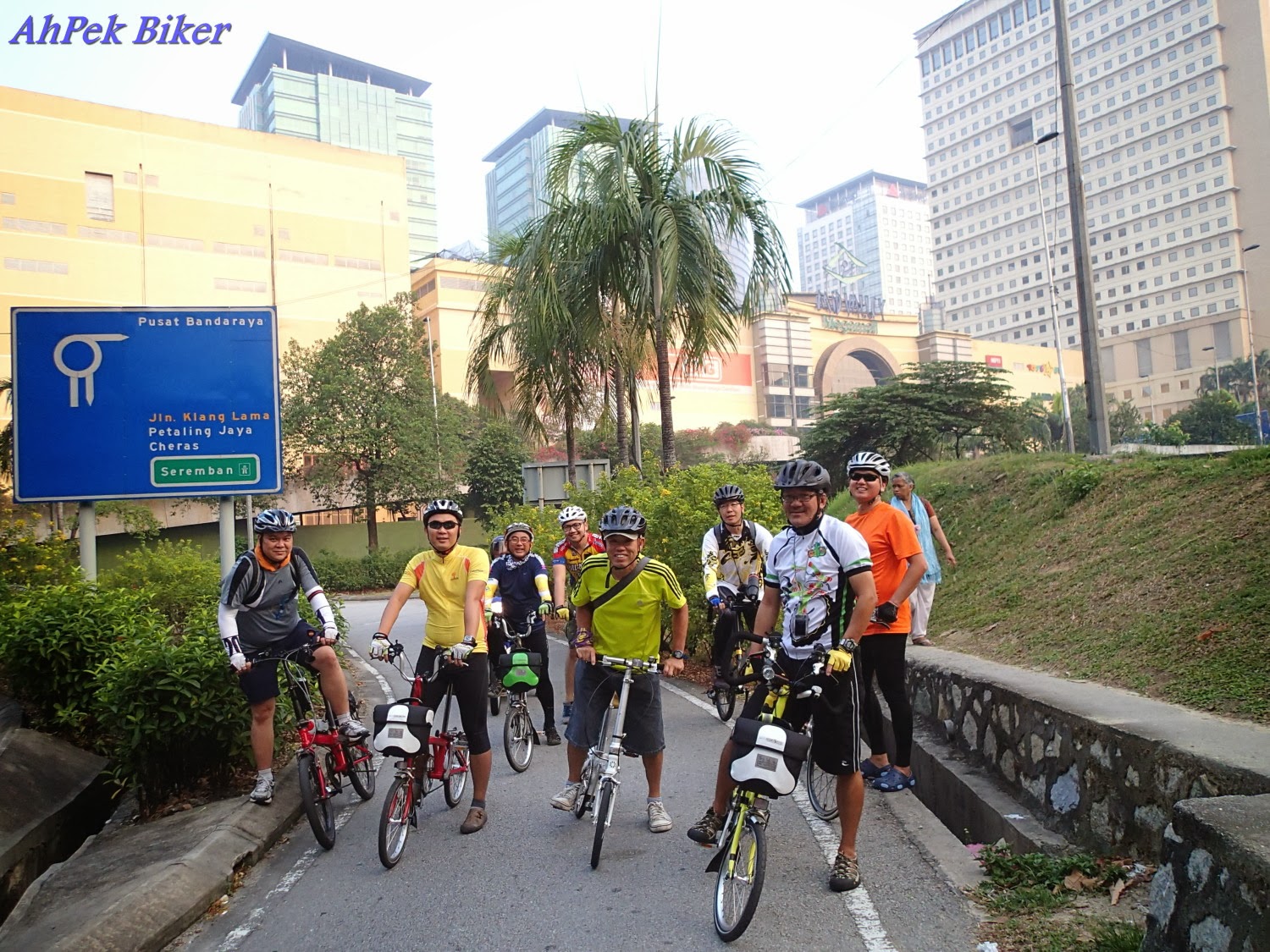 At the motorcycle lane near the Mid-Valley mall, Kenny joined us.
The skies were hazy from pollution of burning forest smoke blown over from Sumatra. Were we brave or crazy to cycle in this haze. Fortunately, the haze was not that thick. 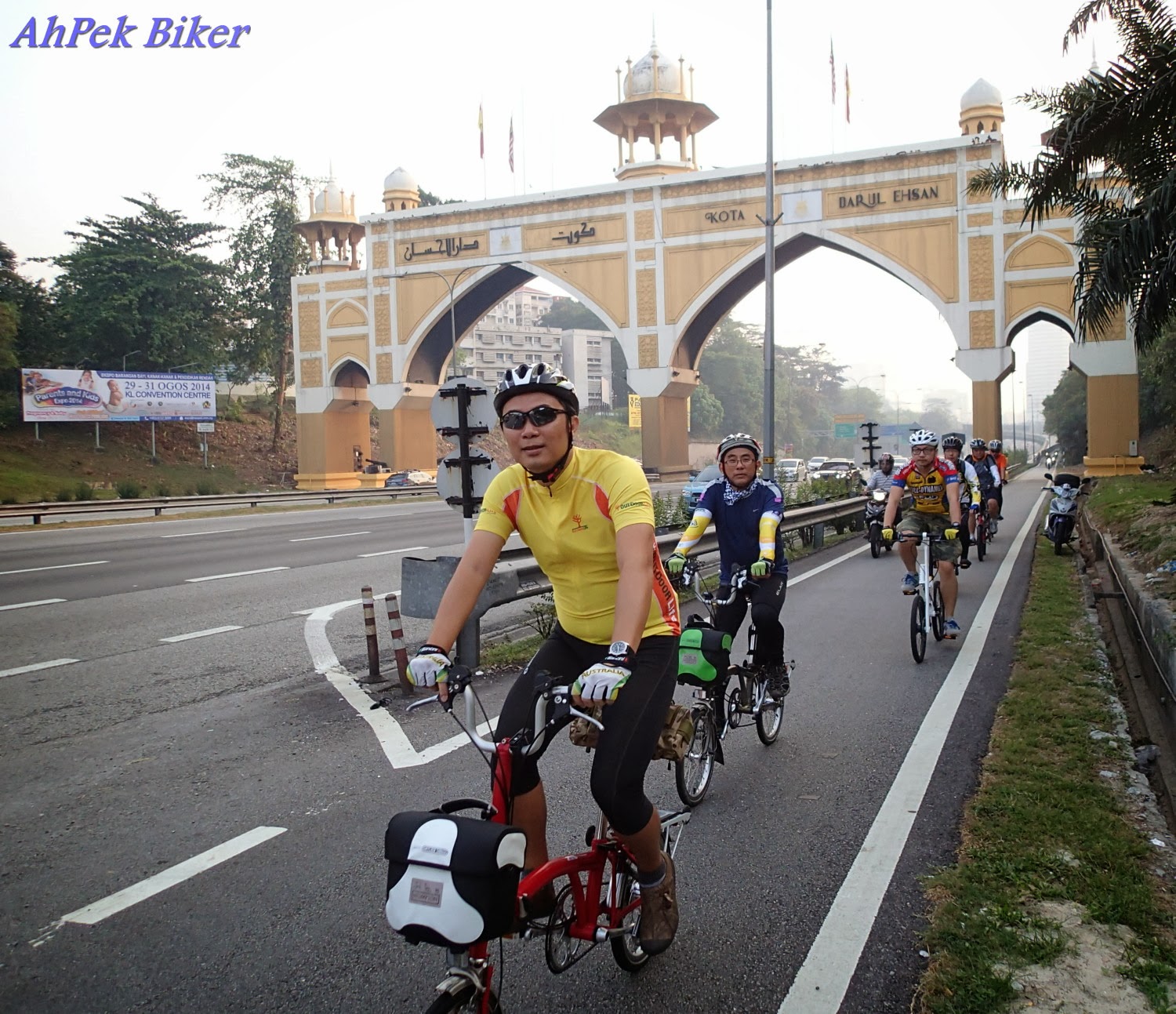 8:10 am - Riding pass the Kota Darul Ehsan Arch, we are into Selangor! The arch marks the boundary between the Federal Territory of Kuala Lumpur and Selangor. 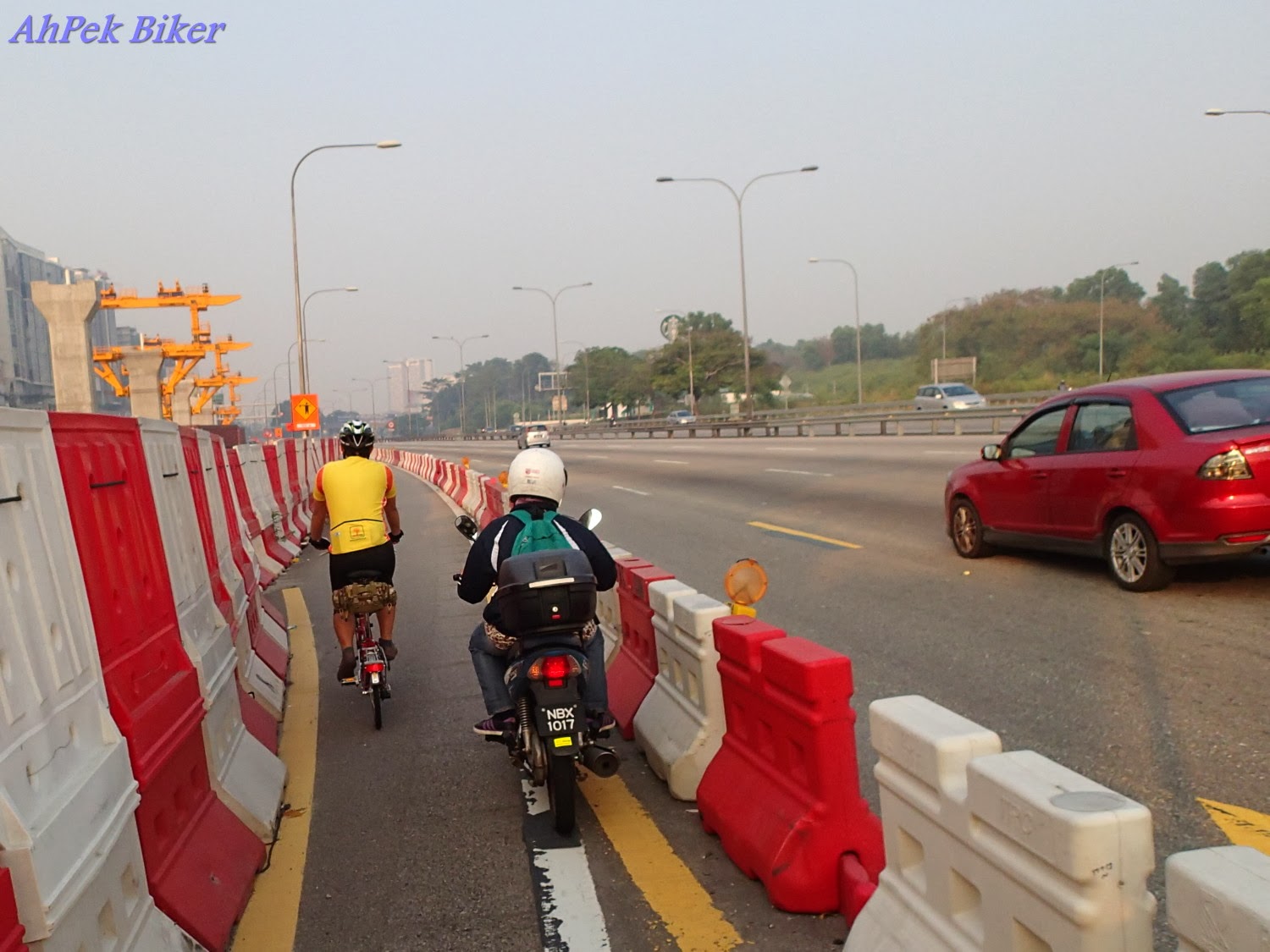 Somewhere after Subang Jaya and before the Batu Tiga toll plazas, construction work for the new LRT tracks have encroached onto the motorcycle lanes. Temporary lanes have been demarcated on the highway itself; these are however quite narrow - extra care should be taken here. 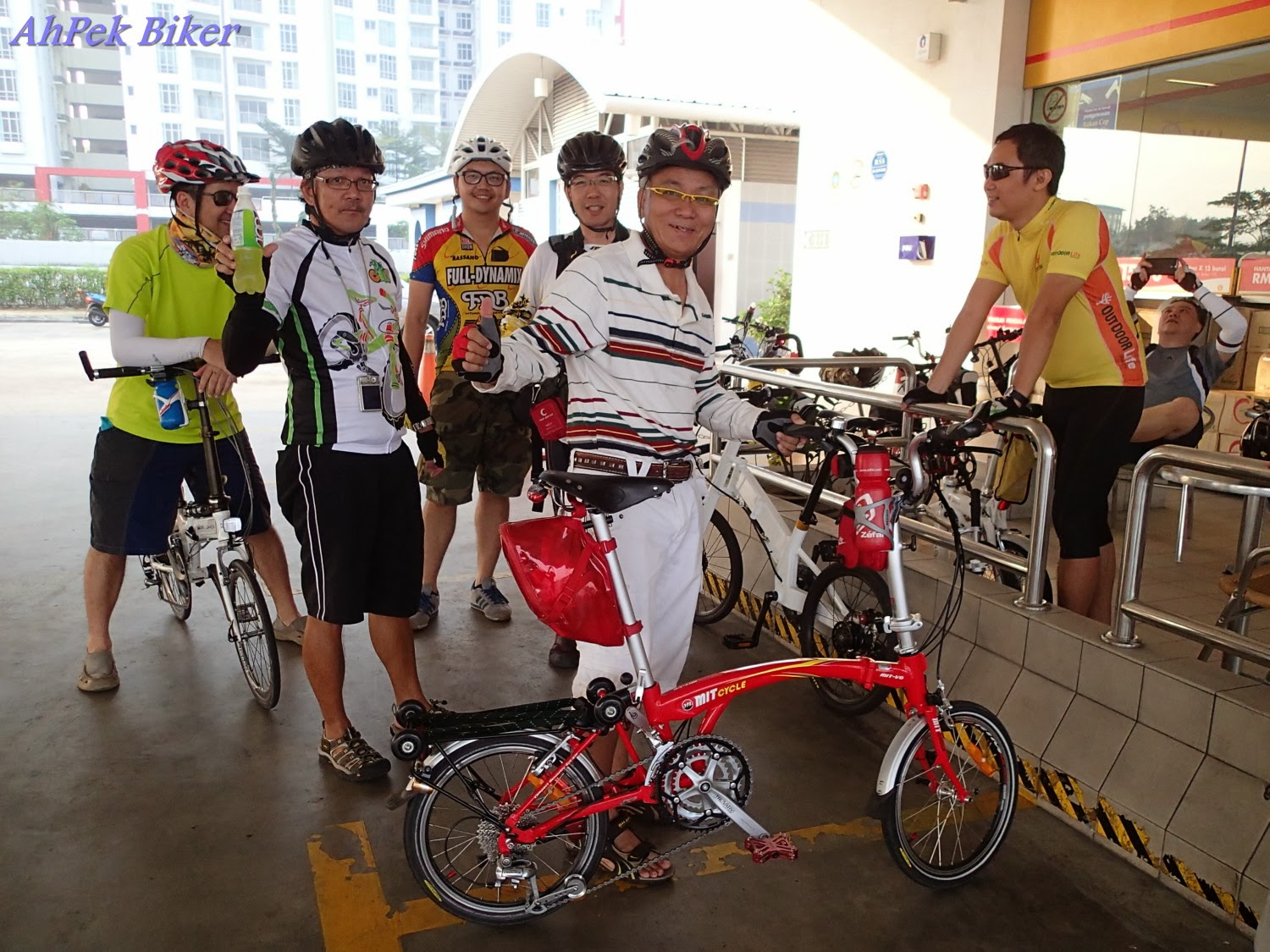 At the Shell Station near the Batu Tiga toll Yew Ming and Rivern joined us. Rivern was riding his new striking red MIT-V8 (also known as the MIT Pro-BP01). He has modified the bike from the basic 7-speed to an impressive 24-speed by changing to a 3-gear crank at the front. Since then he has re-modified the bike to a 16-gear with two crank at the front, with a larger front 55-crank gear. Those keen on do similar modifications to the bikes can send a private message to Rivern. 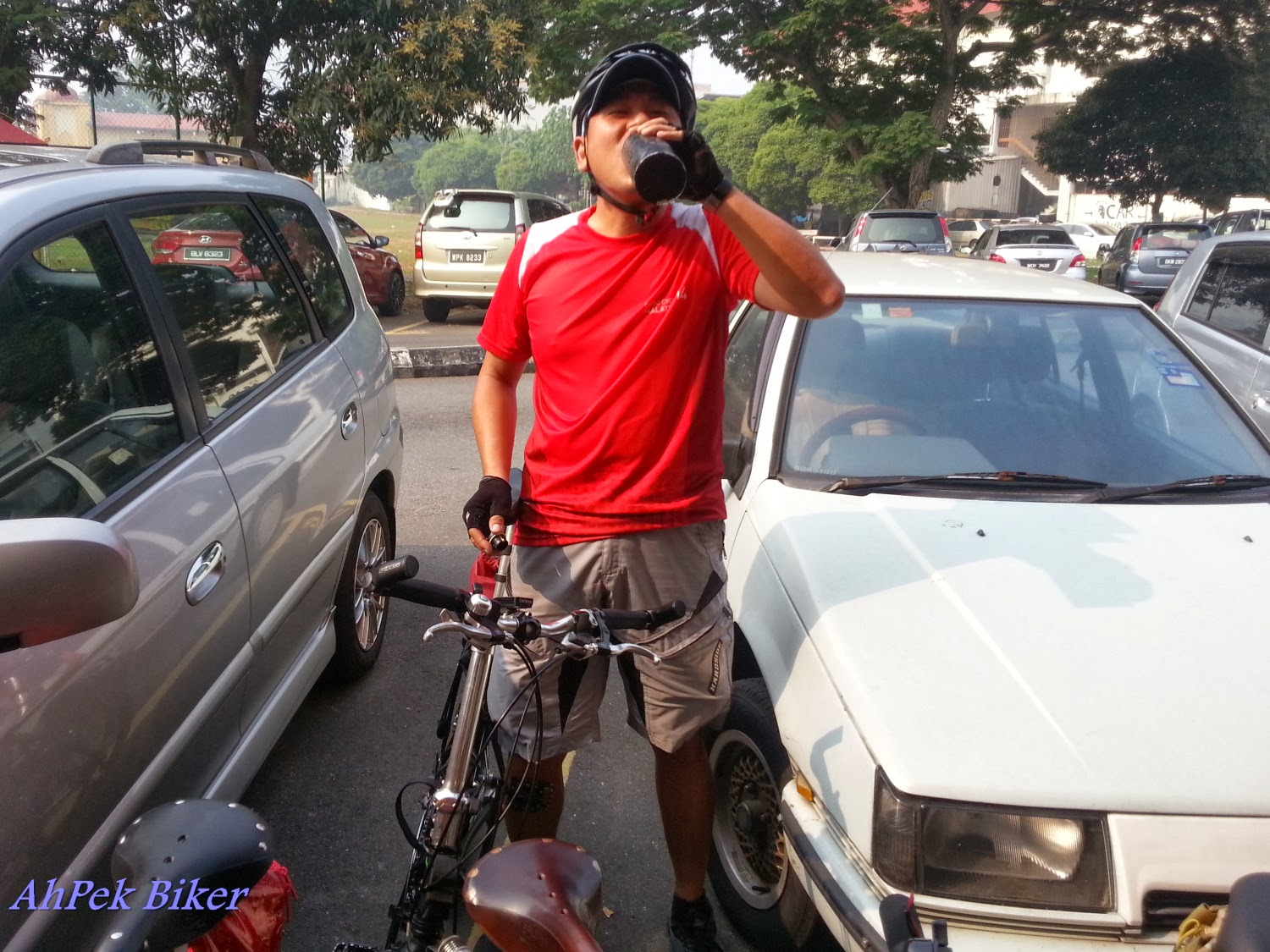 Yahoooo! Bak Kut Teh Time!!
10:00 am - At Taman Berkeley, we stopped to have the famous Bak Kut Teh at Mo Sang Kor.
Just as the food was being served, we were surprised to see Christopher arriving. Cycling from his home, he had missed us at the start point and had pedalled furiously to catch up with us! Good job, Christopher. 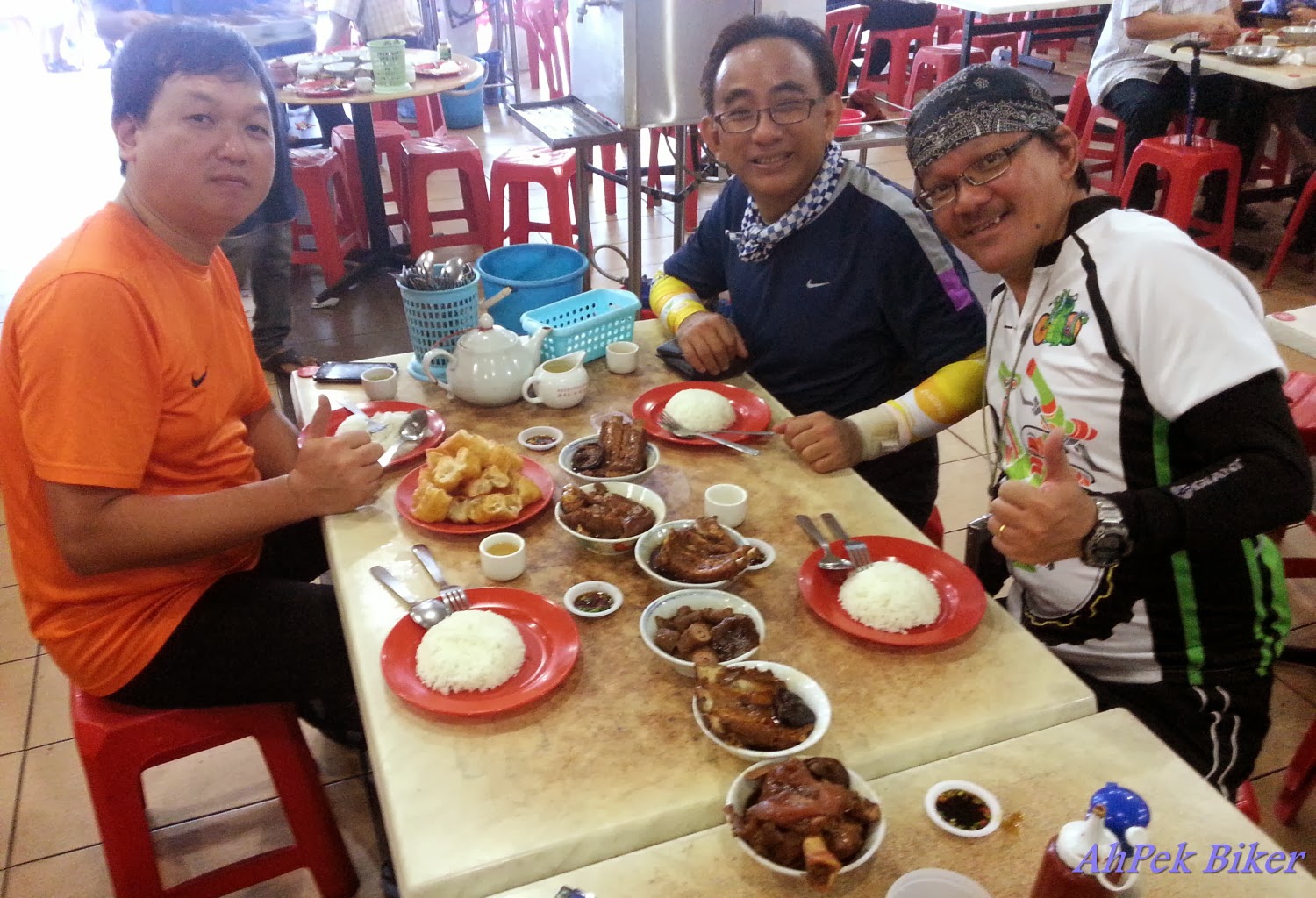 The food came in individual bowls for each of us, but we decided to share nonetheless. They were rather stingy in the amount of soup given and the Yew Char Kway we got from a neighbouring shop as it was not sold here.
I can understand why they are stingy with their soup, it was thick and very sweet with the flavour of the meat and herb. Personally, I prefer the one from Kee Heong; their soup may not be as good but their meat is more tender and juicier. 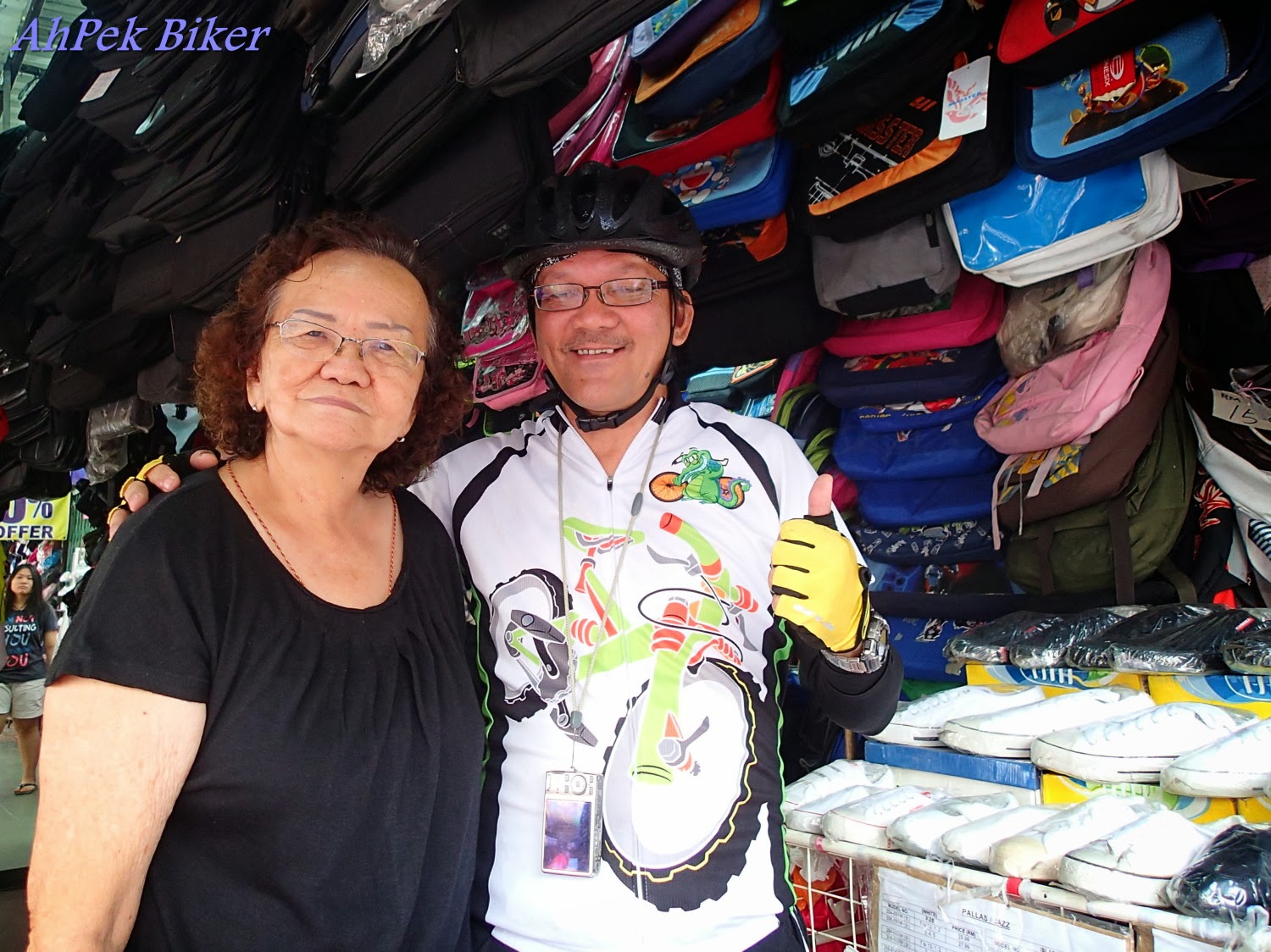 We cycled into old Klang town, where at a bag shop operated by Kookkeong's sister, he met his mother there too. Weren't his mother most glad to see this filial son! 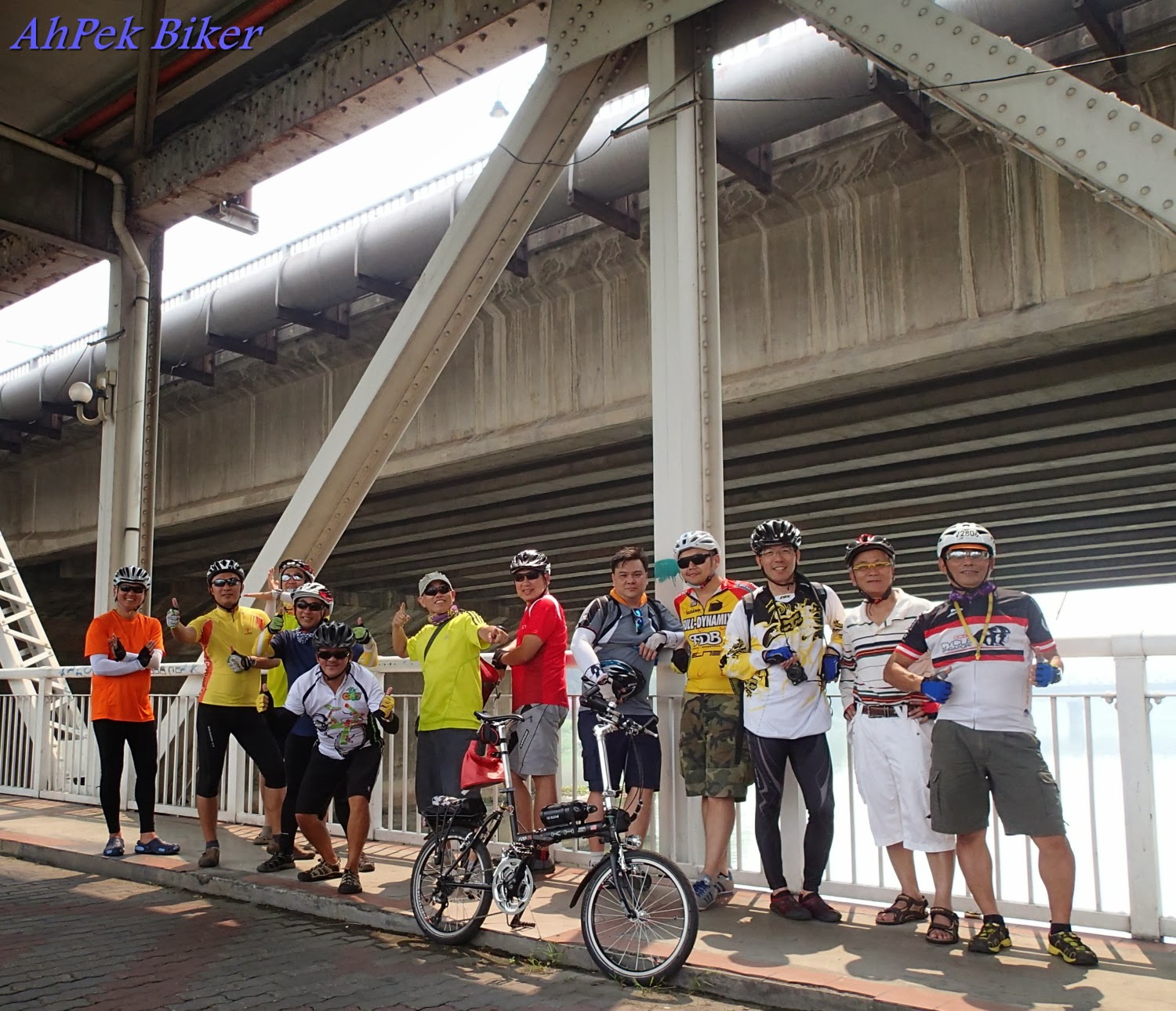 Next destination - the pedestrian bridge over the Klang River at Jalan Jambatan Kota, where we stopped to observe the locals passing by and also for some good photo opportunities. 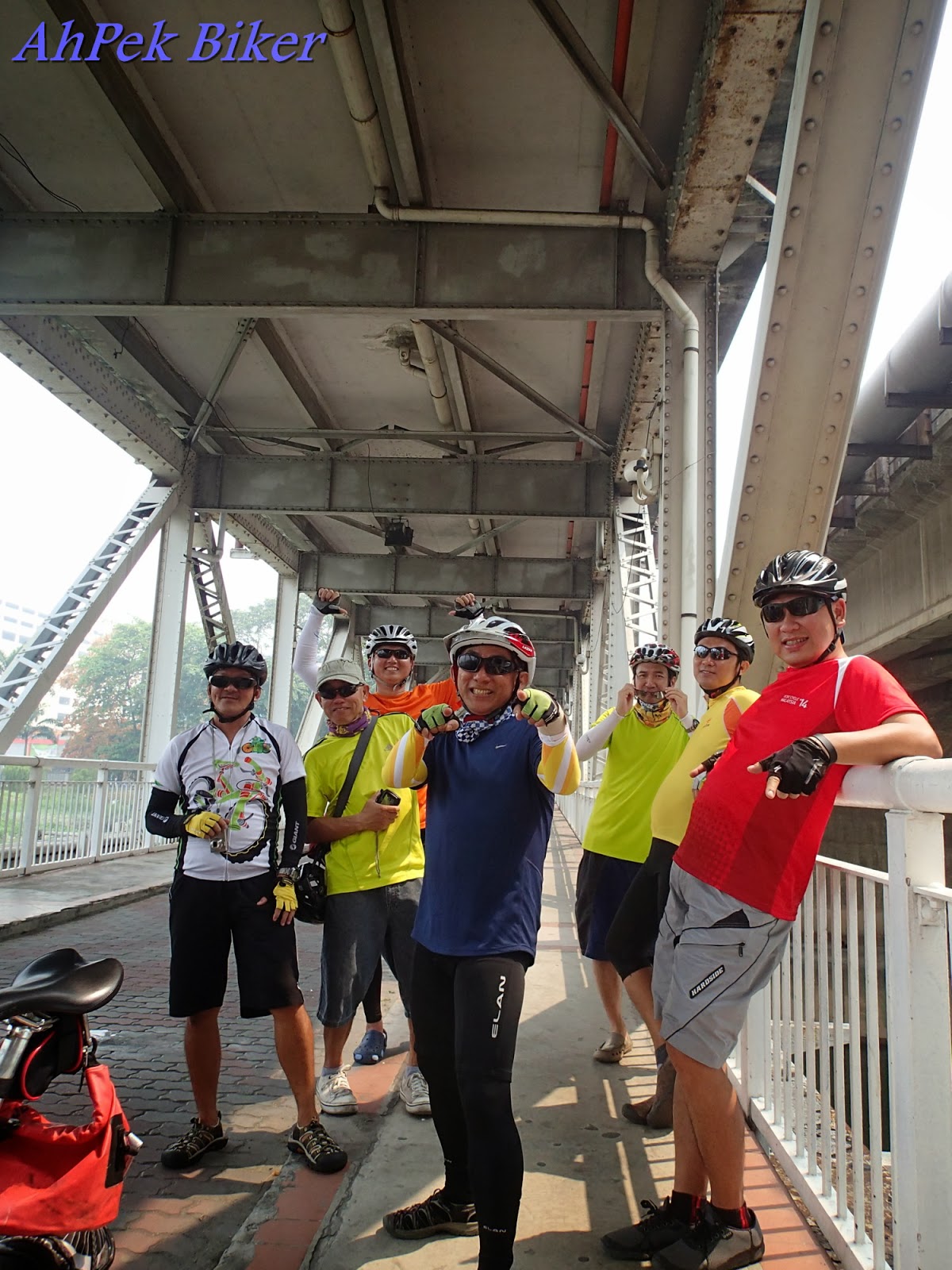 The steel structure of this bridge makes it a good back-drop for our photos. 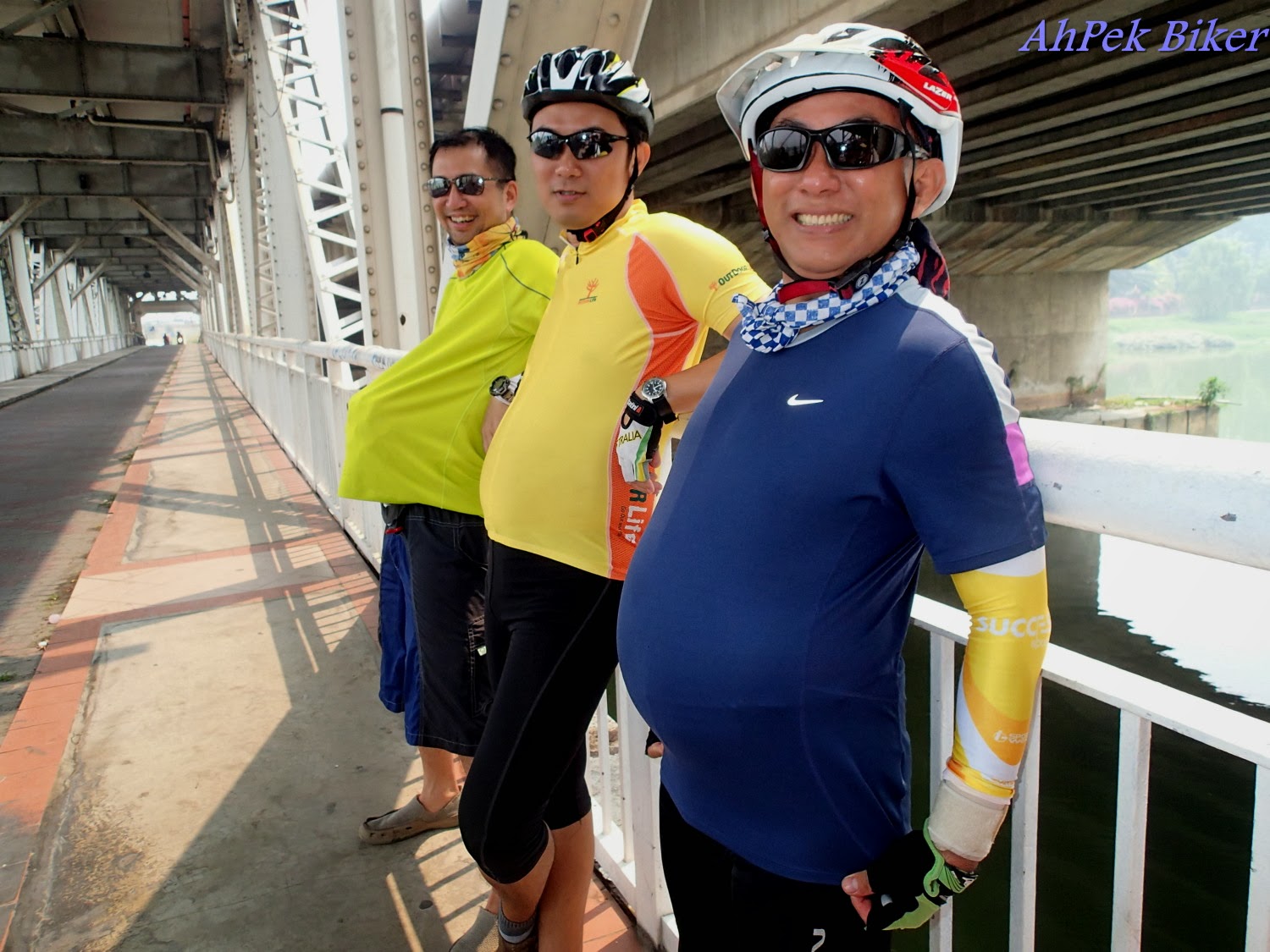 Pregnant male cyclists? Nope, they just had a loads of good Bak Kut Teh. 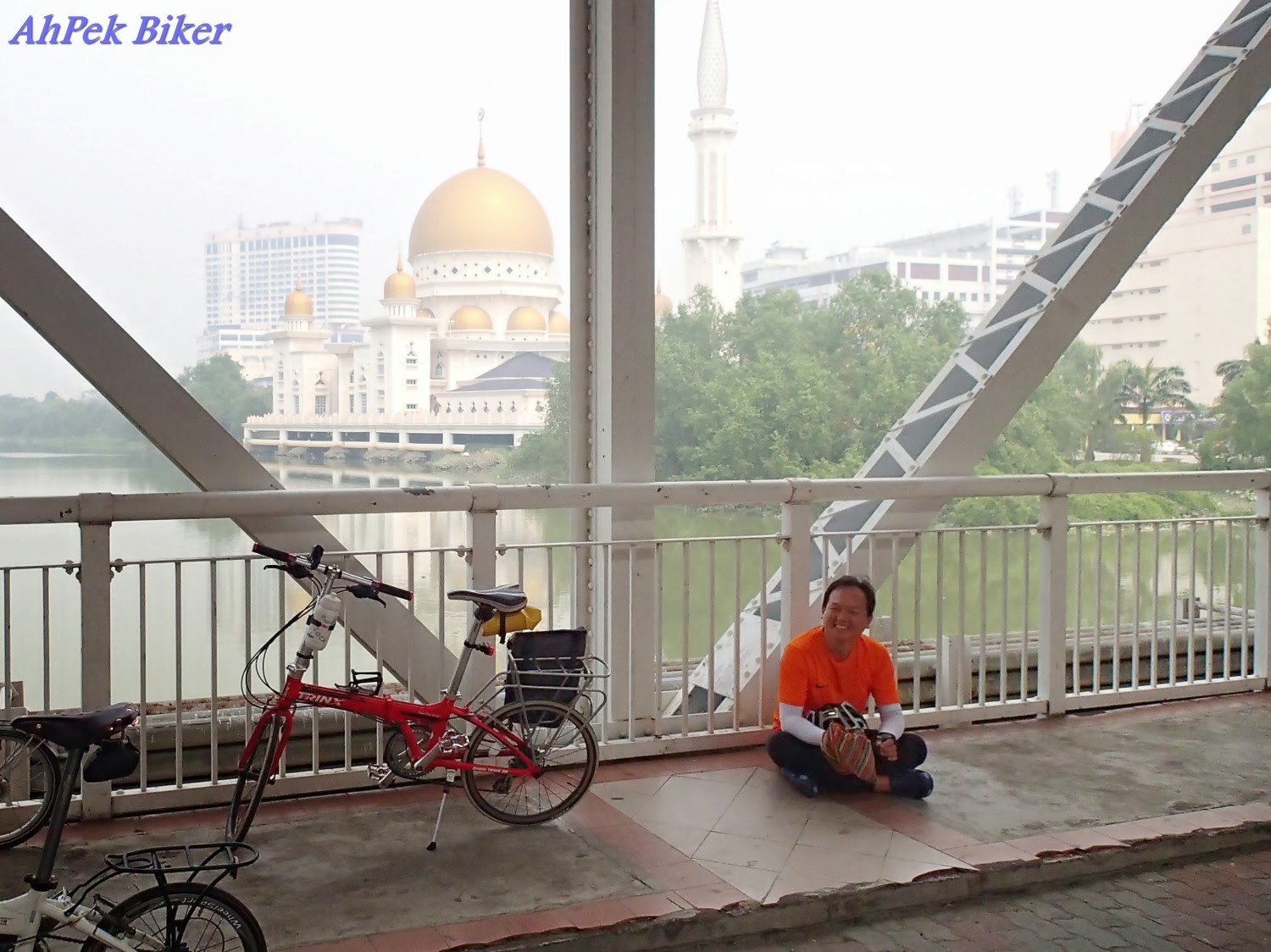 Jason's unintentional pose made him look like a street beggar, put a bowl in front of him and it will be perfect. 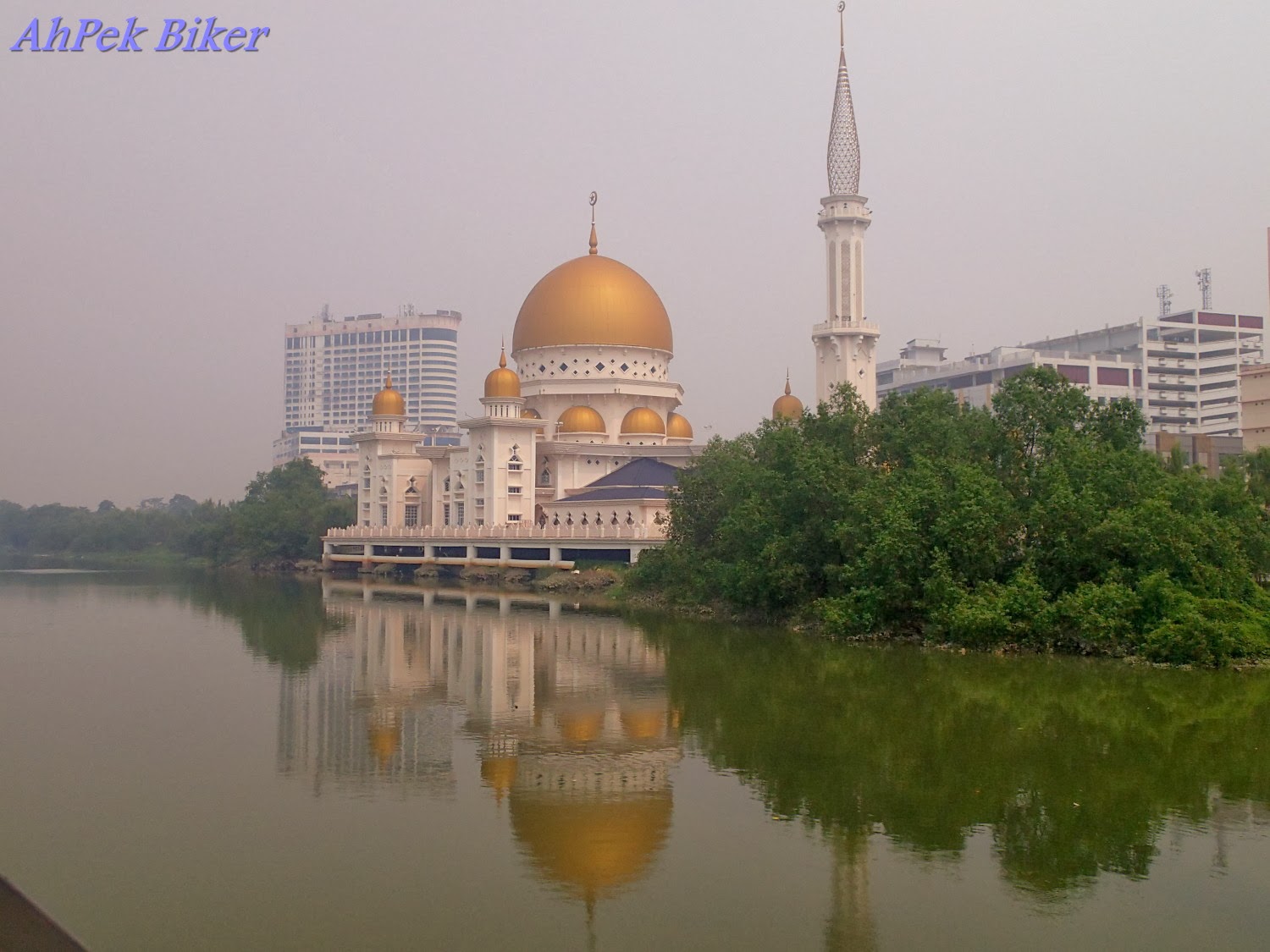 A nice view of the Royal Klang Mosque from the bridge. It was hazy, but the beauty of this mosque and it's reflection on the Klang River still shined through. 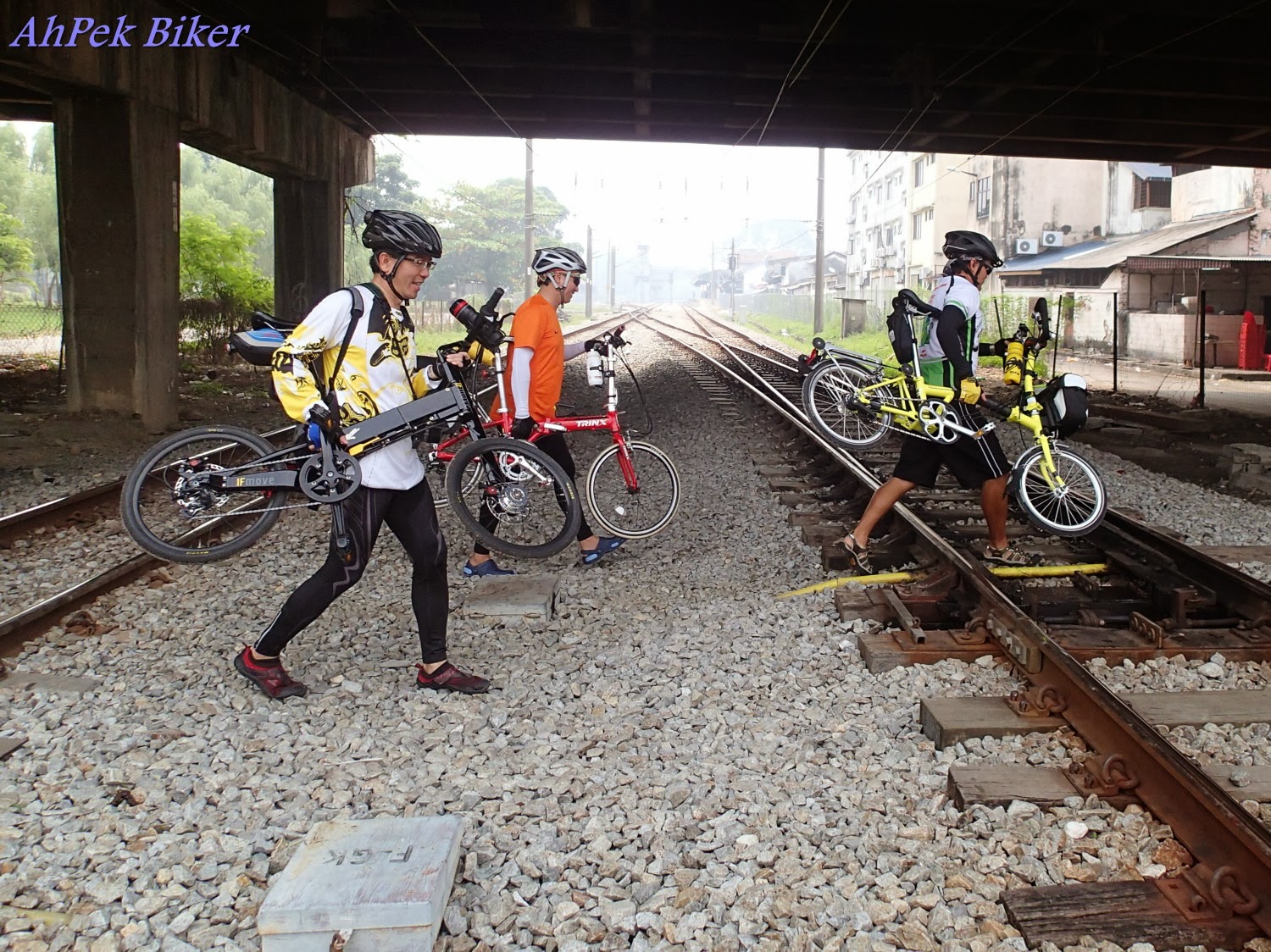 Further down, below the Jalan Tengku Kelana Bridge, we took a risk crossing over the railway tracks to get to the other side of town. Please do not try this, trains pass by here quite often. 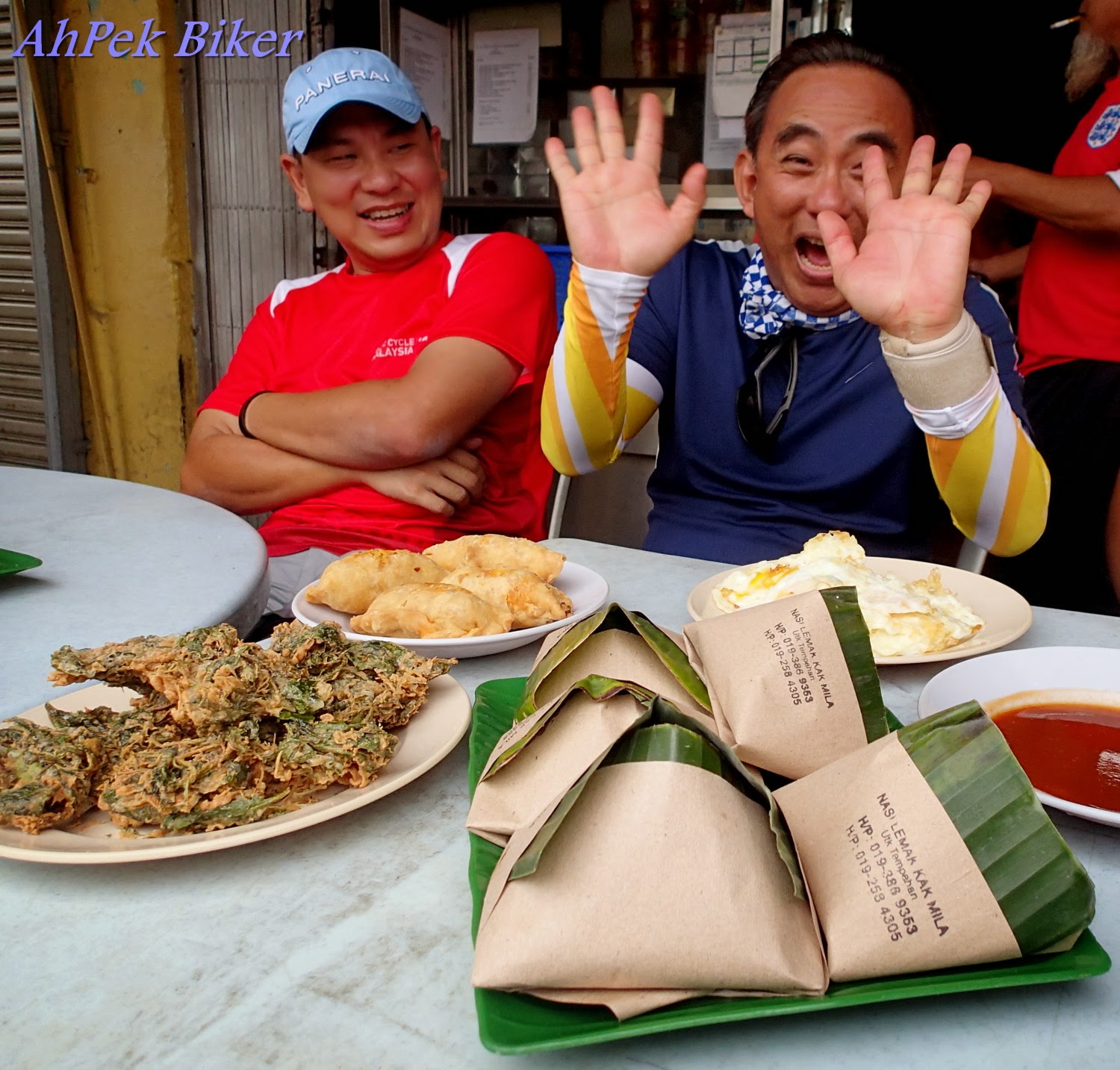 Coffee break at Chong Kok Coffeeshop - Chris provided us some comic relief. With food stacked in front of him he was unconvincingly saying "Not me! Not me!" 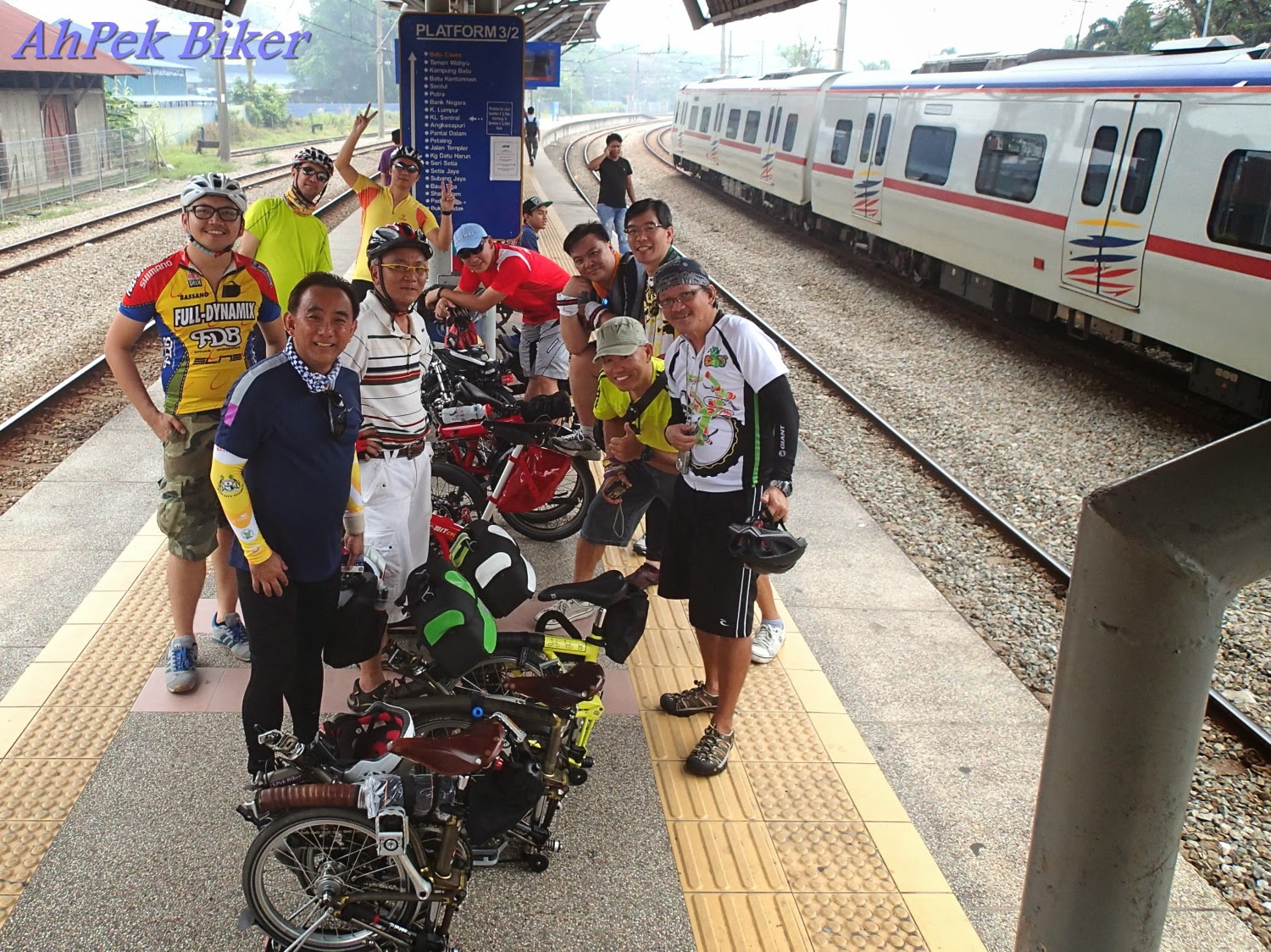 At the Klang Station, bikes folded and all ready to board the KTM Commuter train. 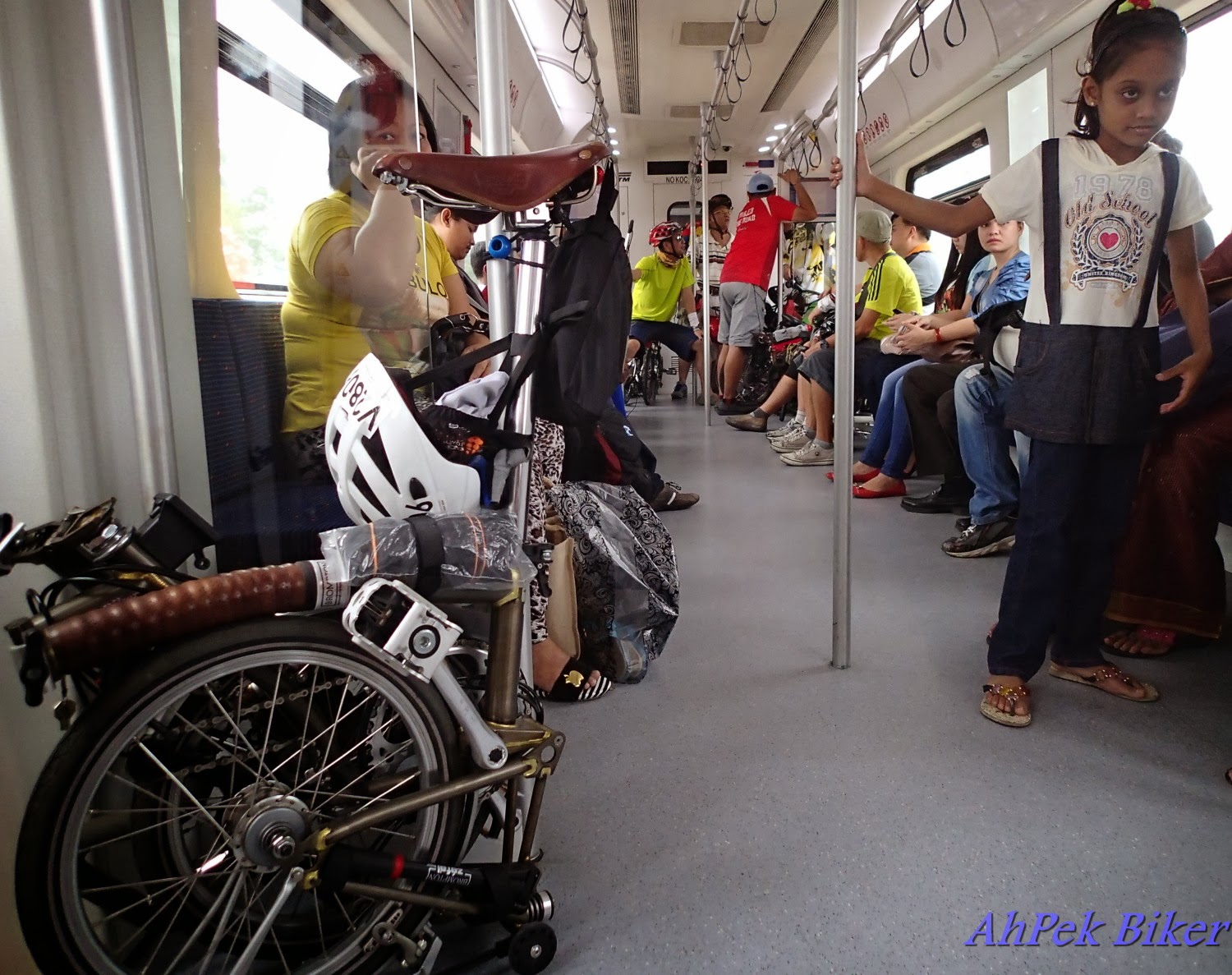 The air-condtioned coach of the train was a welcomed relief from hot weather outside. These couple of months, the hot spell in Kuala Lumpur has been hotter than normal. 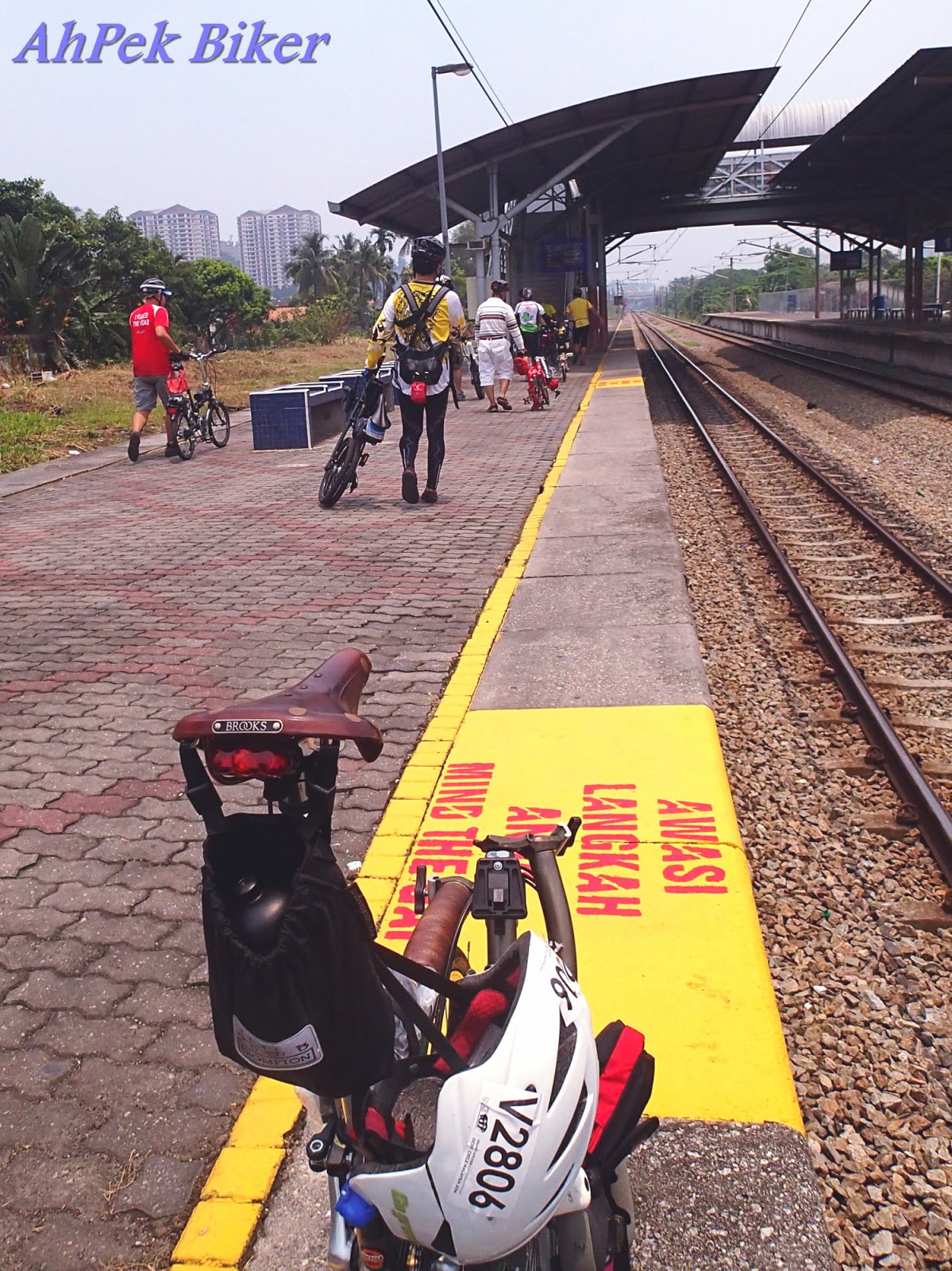 We disembarked at the Jalan Templer Station and carried our bikes across that bridge ahead. Our plan was to cycle to Petaling Jaya Old Town for some ice-kacang treat.

Oops! A wrong turn led to us riding down Old Klang Road instead of heading to PJ Old Town. There goes the ice-kacang.
No worries, ice-kacang are aplenty in Malaysia. Tailim had a recovery plan that saw us heading for Brickfields for the one there instead. 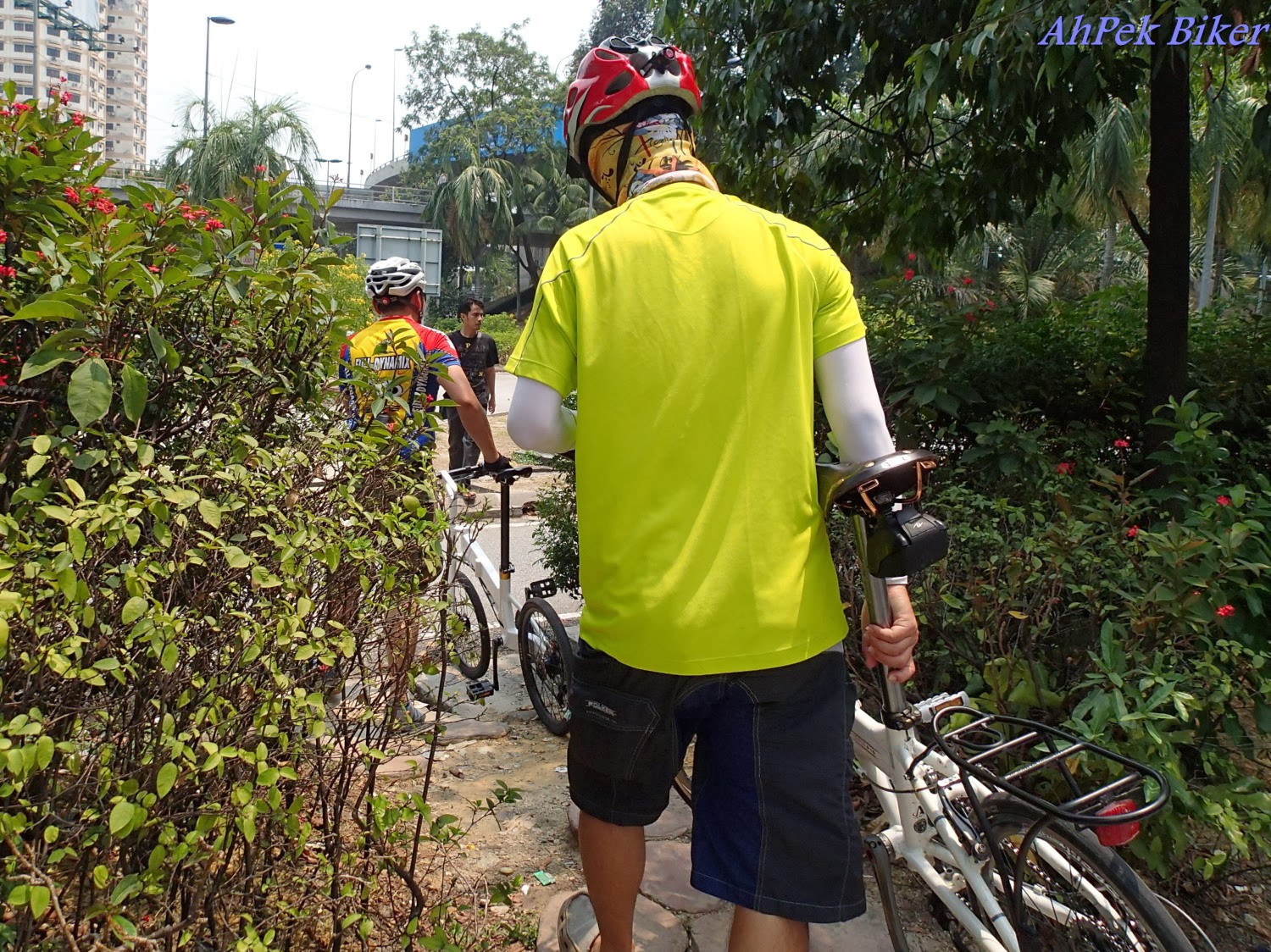 Some bush-whacking to get to the Federal Highway motor-cycle lanes, and from there to the Ang Seng area of Brickfields. 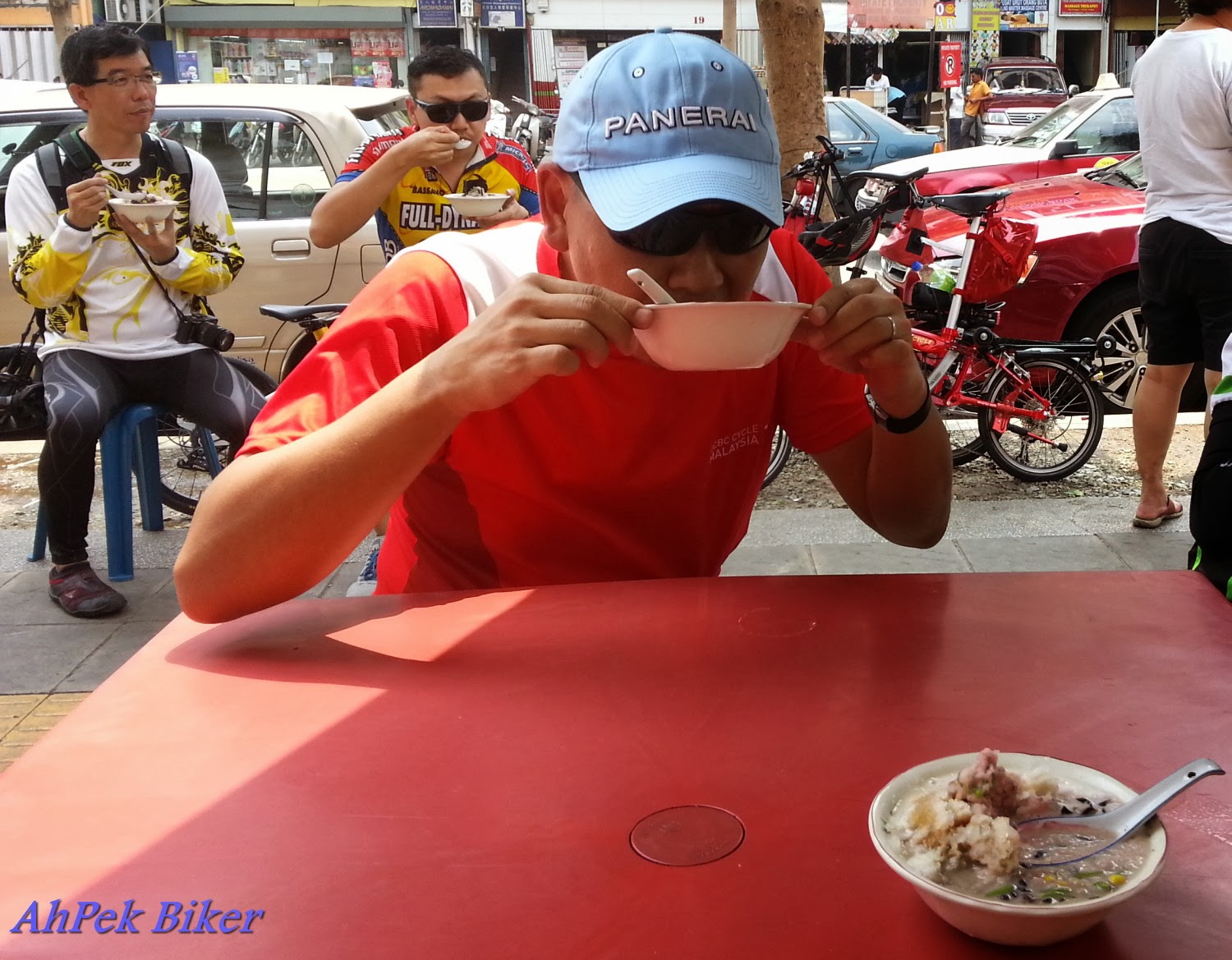 Chris, wolfing down the cold, refreshing ice-kacang, this helps a lot during the present hot spell. The stall is at the five-foot way of the 7-11 outlet next to the Brickfields YMCA. 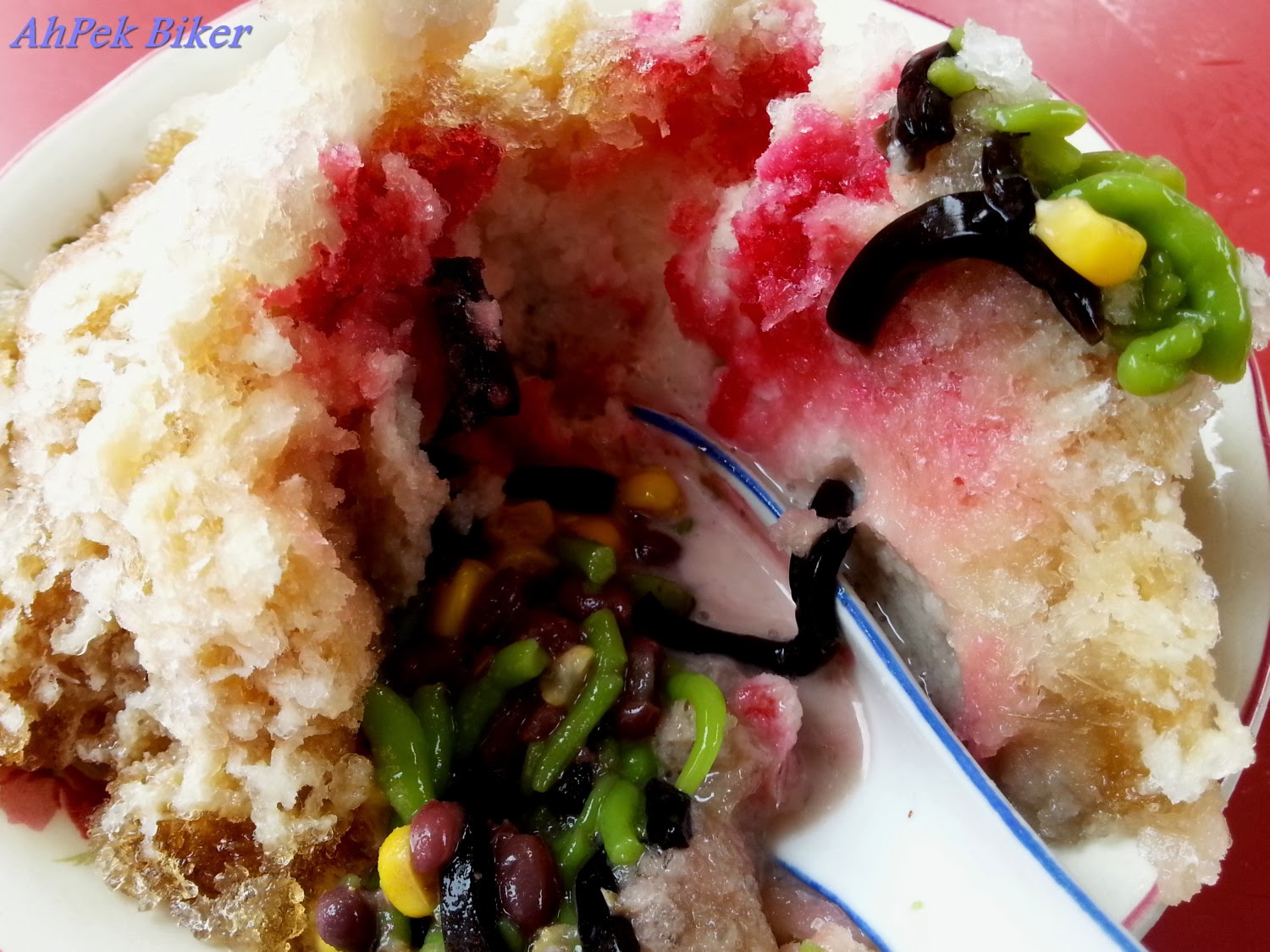 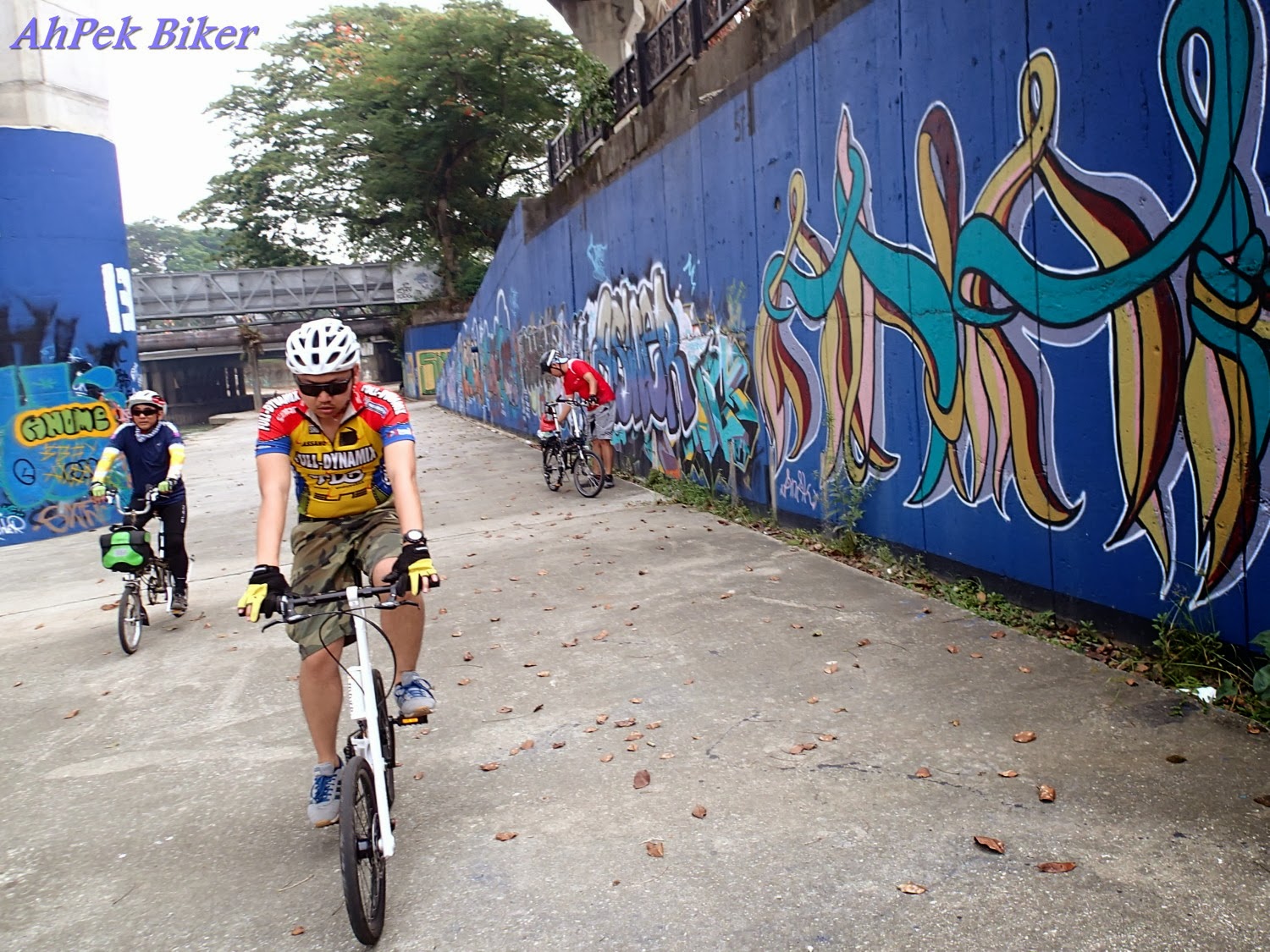 Another surprise for Michael. We took him on another of our secret route - the storm water drains of the Klang River. There are many large murals painted on the walls of these drains (... see Street Art @ Klang River Storm Drains). This is a nice short-cut route that led us from back to our start point; convenient yah? 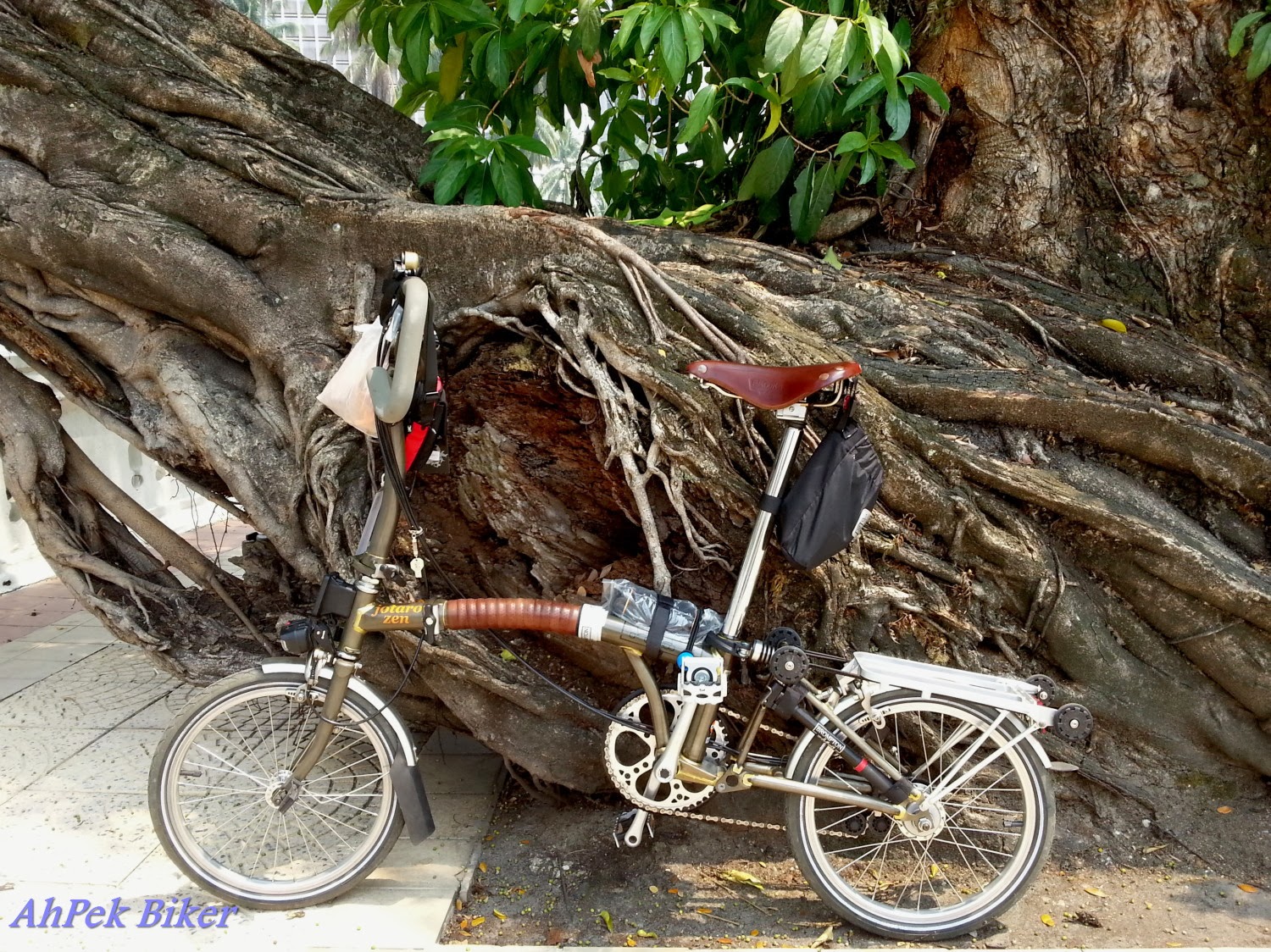 It has been a ride of good food, loads of fun and more importantly, great company.

TILL WE RIDE AGAIN.
ADIOS!

P.S. - The next couple of weeks is going to be great for cycling! One will be a ride across the new Penang 2nd Bridge, and after that a Fun Ride at the Taiping Heritage Ride. Both will be a first for many of us.

You are at - Jotaro's Blog / AhPek Biker / Cycling Malaysia / Kuala Lumpur-Selangor / Klang Bak Kut Teh Ride
(comments most welcomed below. if you like this pls share via facebook or twitter)
Posted by Jotaro Zen at 2:07 AM