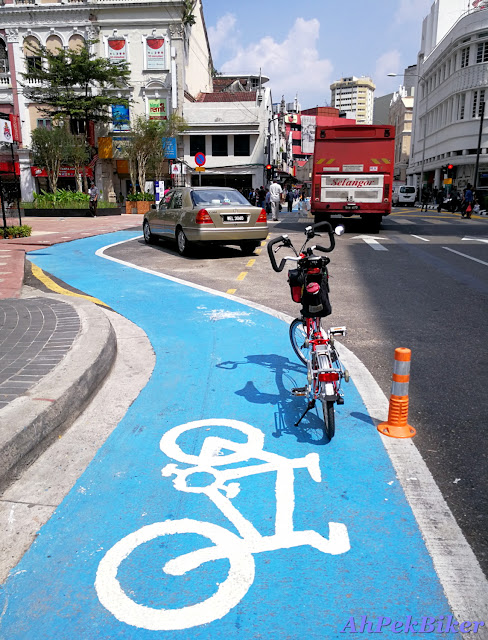 Kuala Lumpur has a new set of cycling lanes. These new lanes runs through the old and new commercial districts of the city and was built in conjunction with the 9th World Urban Forum (WUF9) being held in the city. It was officially launched on 9th February 2018.
These new lanes should complement the first set of lanes opened by the city mayor on 14th April 2015.

Let's have a look at the lanes, starting with the map below, please note that although I have plotted the lanes as running on roads, there are times that they run along the pavements:

The new lanes is a 6.80 kilometer loop that starts from Medan Pasar and leads to the Petronas Twin Towers via Jalan Raja Chulan and Jalan P. Ramlee. The return leg is via Jalan Ampang, Jalan Sultan Ismail and Jalan Raja Laut.
Note: The total length of lanes built is about 11km., which includes certain stretches with lanes on both sides, and also road crossings. Although I rode an anti-clockwise loop, it should be done clock-wise.


Actually one can start anywhere along the loop to one's convenience especially if one is commuting via these new lanes. I was checking out the full loop and opted to start from Medan Pasar, right at the old heart of Kuala Lumpur. It's nearby here at the confluence of the Klang and Gombak rivers (where the Masjid Jamek is) that Kuala Lumpur started in the 1800s as a small hamlet of a few houses and shops. It has grown leaps and bounds and now covers 243 square kilometers. It's status as a world renown city was given a boost when it hosted the 9th World Urban Forum (WUF9) in February 2018 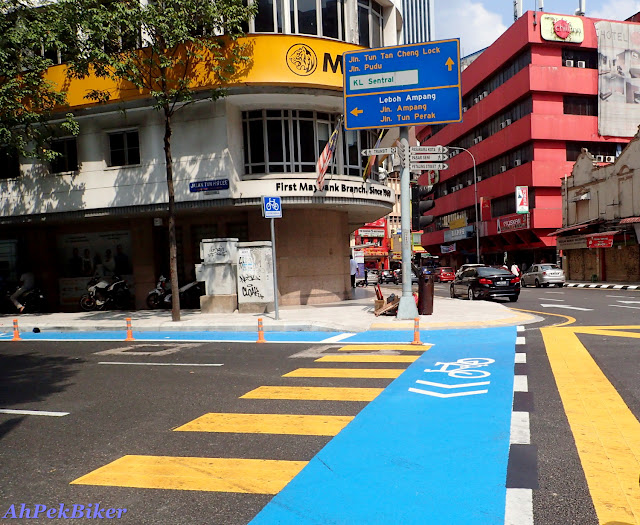 The lanes then run along Jalan Pasar Besar to Jalan Yap Ah Loy and then Jalan Hang Lekiu; all very old roads with interesting histories. 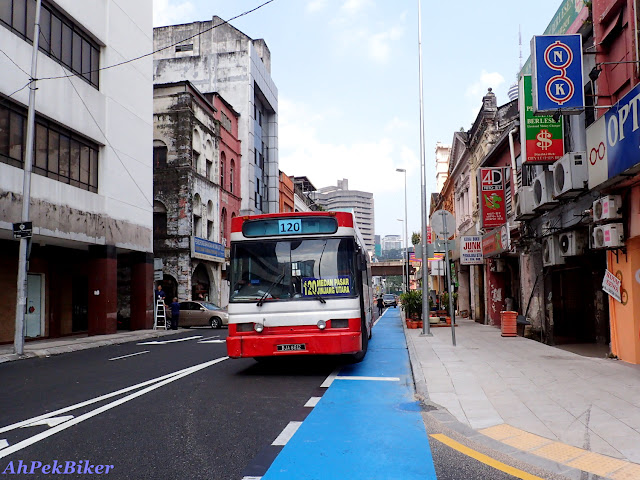 It's here that many of the old shops can still be seen plying a trade that they have been doing for centuries. The lanes are still new, the paintwork still a bright blue with hardly any damage or tire marks. Even though spanking new, most traffic here have recognize the lanes and generally avoid travelling on them. 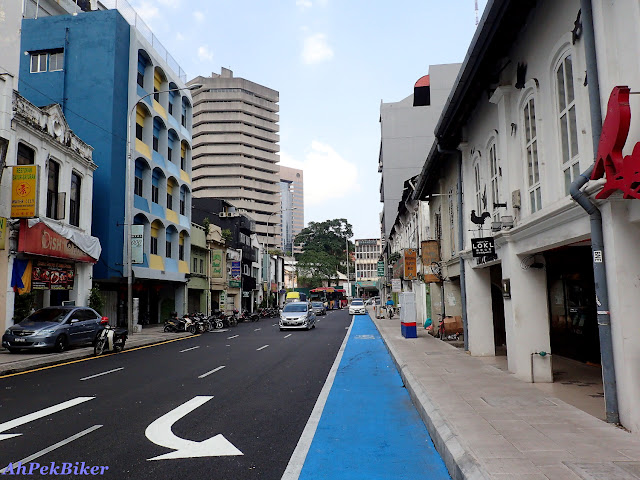 But the public still needs to be educated, as cars and motorcycles can still be seen parked on them. 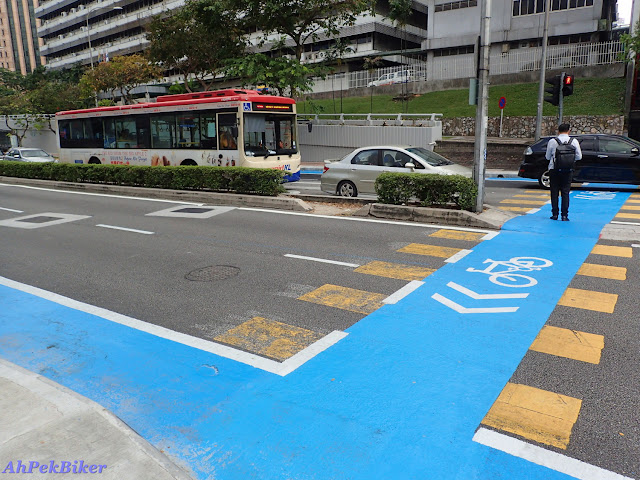 From there I cut into Jalan Raja Chulan. Here the lanes run on both sides of the road, with a crossing right in front of the Telecoms Museum. The odd thing is the bike crossing runs right on the center of the pedestrian crossing instead of beside it, no wonder pedestrians can be seen walking on the lanes. I do hope that this will be corrected. 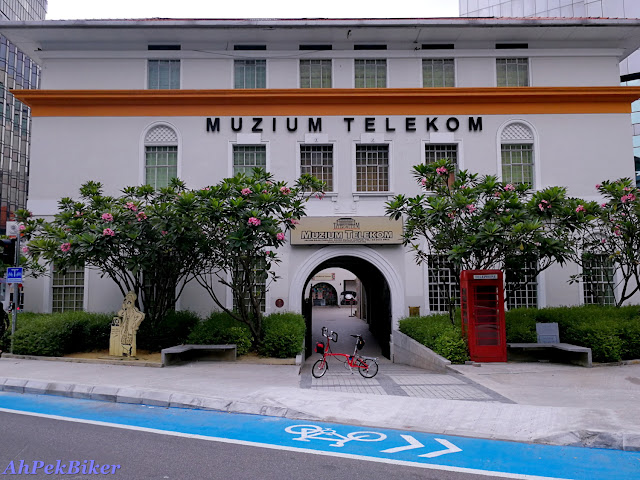 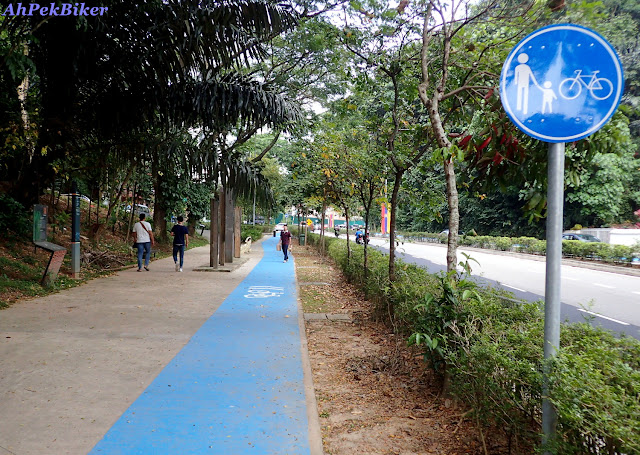 Further along, the lanes goes onto wide, shady pavements that are also shared with pedestrians. The lanes are marked in blue with white bicycles icons, the pedestrians side however are not marked. 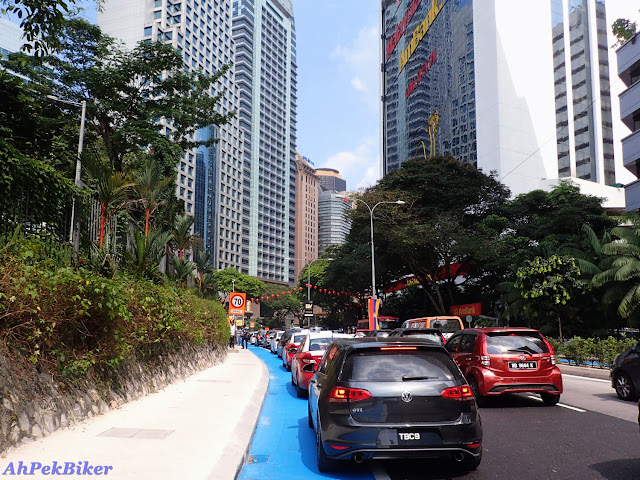 The pavement section runs for about five hundred meters and then the lanes are back onto the roads. Here at Jalan Raja Chulan, despite a light traffic jam, the cars were quite well behaved with most sticking to their lanes. 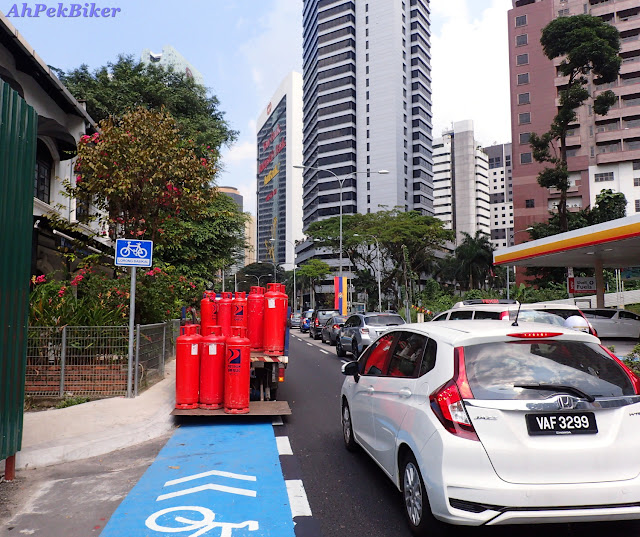 Then right smack at the center was a truck unloading some gas tanks. Unloading of goods happens quite often, especially at the inner core commercial area, it's something that has to be addressed. The cycling lanes should not cause hardship for those houses or shop-houses they front, a balance has to be found. 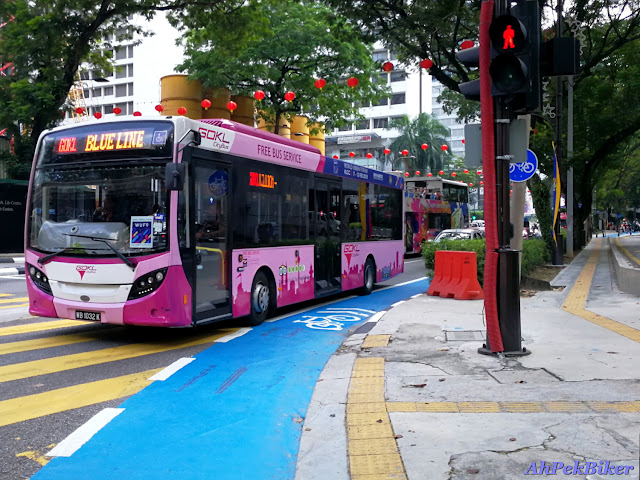 At an intersection of Jalan P. Ramlee, most vehicles would avoid the lanes EXCEPT for motorcyclists who would quite often encroach onto the lanes. I did an experiment here, left my bicycle parked on the lanes and most motorcyclists would acknowledge it and swerve away. It's going to be a gradual learning process for the motorcyclist, that cycling lanes are meant for cyclists. 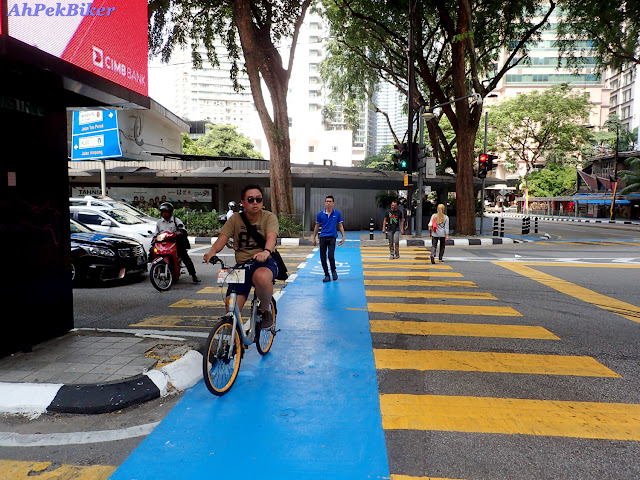 This crossing was properly done, different lanes for cyclists and pedestrians. But still pedestrians and cyclists have to keep to their respective lanes to avoid any mishaps. 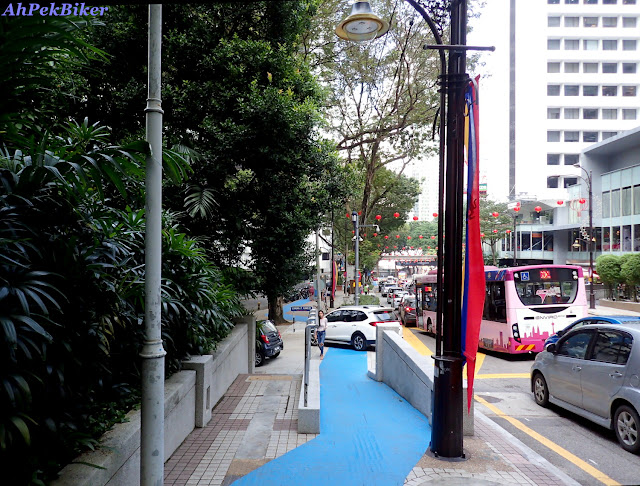 A nice downward ramp at Jalan P. Ramlee. The lane cuts across the pedestrian pavement, who has right of way? Short of a zebra crossing on situations like these, I trust cyclist will discipline themselves and give way to pedestrians.
OR perhaps it's time to introduce some shark's teeth here. Shark's teeth? What's that? We will come to that later. 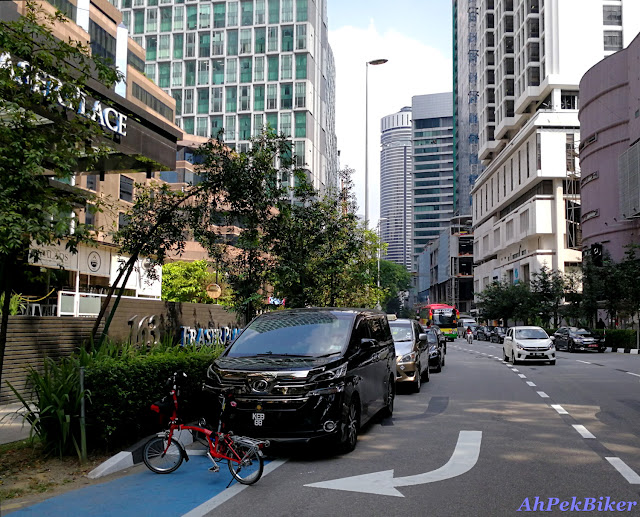 We are now at the Golden Triangle, the heart of the up-market Central Business District area of Kuala Lumpur. Unlike the inaugural KL cycling lanes which ran along the Klang River through some nice riverine sections, these newer lanes runs through the commercial areas of the city where traffic is much, much heavier.
Here at the CBD one would have thought that the white collars would be more sensitive to the cycling lanes, but sadly that was not the case many cars were parked onto the lanes. 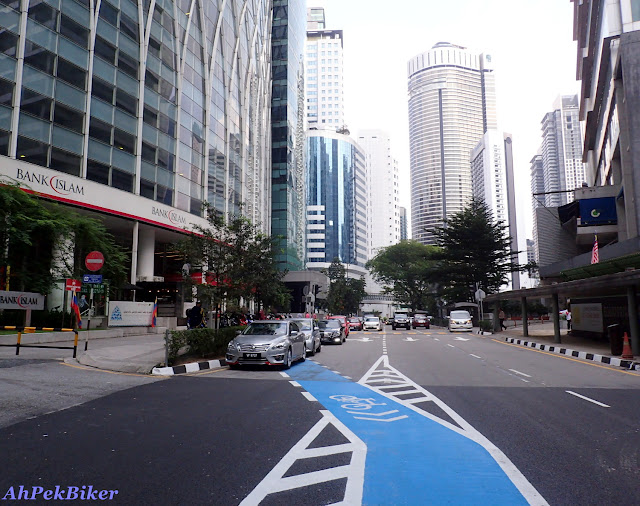 At Jalan Perak, the lanes swerves onto the center of the three-lane road cutting across one of the lanes. A risky situation for cyclists if an oncoming driver was not alert.
Time for the SHARK'S TEETH! 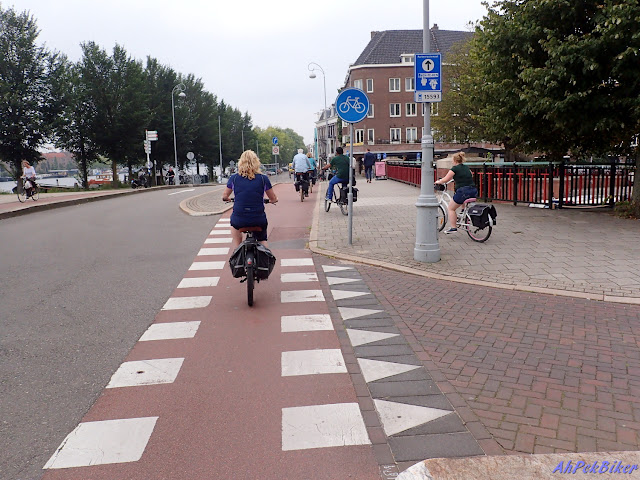 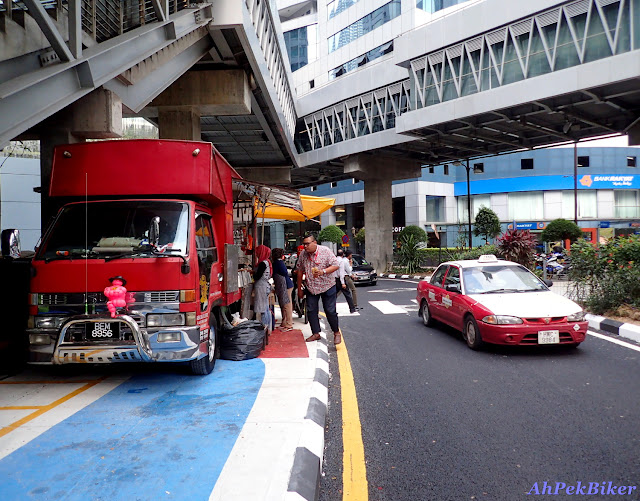 A food truck on the pavement, blocking the cycling lane. Perhaps the truck, which provides affordable food for the office workers, had been operating here all the while - again a balance has to be found. 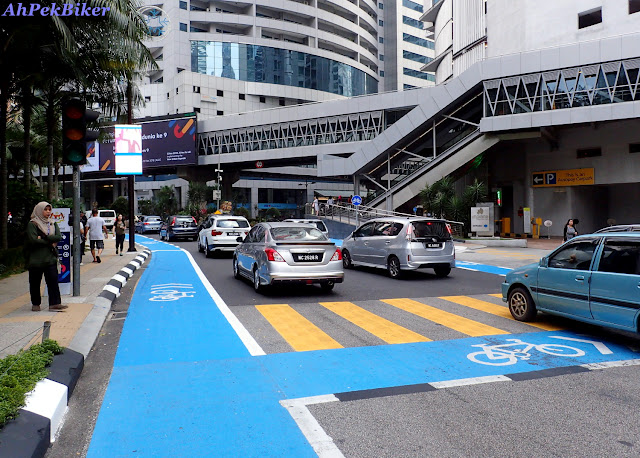 At certain stretches here, the lanes run on both sides of the road. 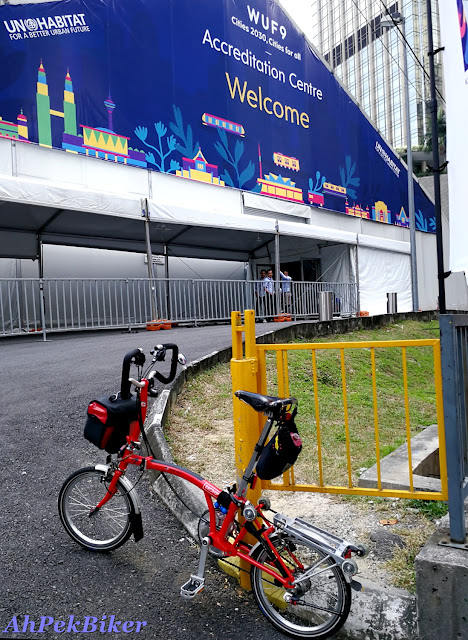 At the KL Convention Centre, where the most of the activities of WUF9 were being held. 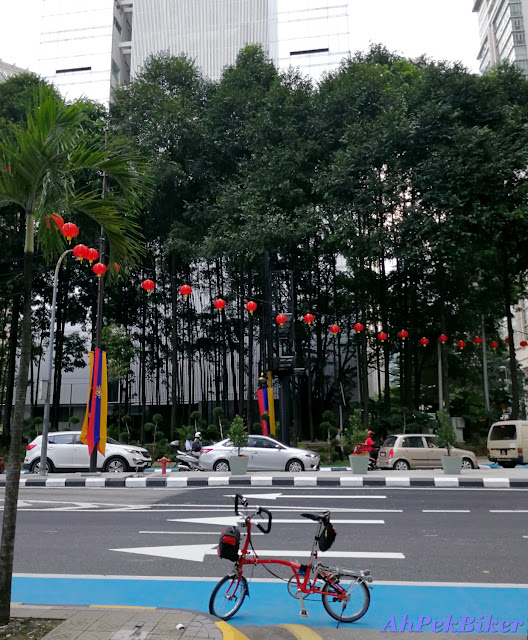 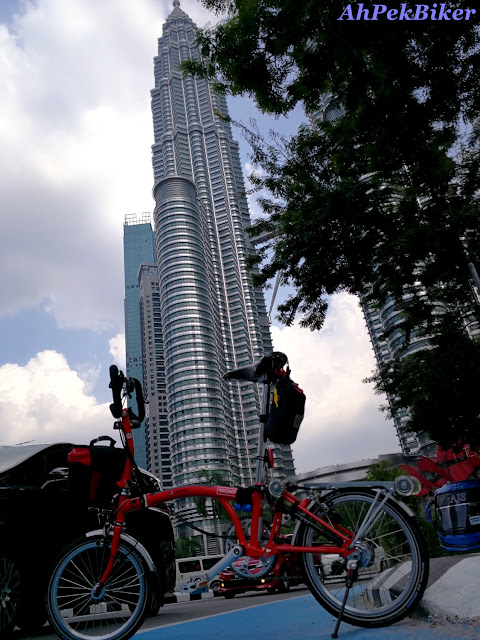 Finally at the iconic Petronas Twin Towers. I can never resist stopping here for a photo. 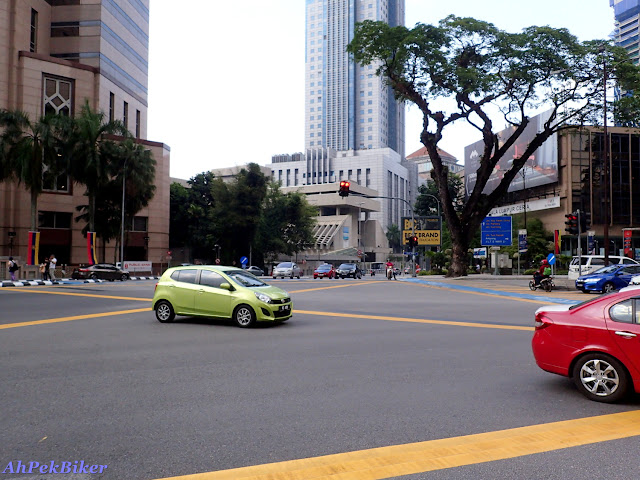 Here at the Jalan Ampang-Jalan P. Ramlee junction, the lanes also crossed over to the other side. I had thought that the would have continued onto Jalan Yap Kwan Seng, but they don't. They just cross over to parallel lanes on the other side of Jalan Ampang. 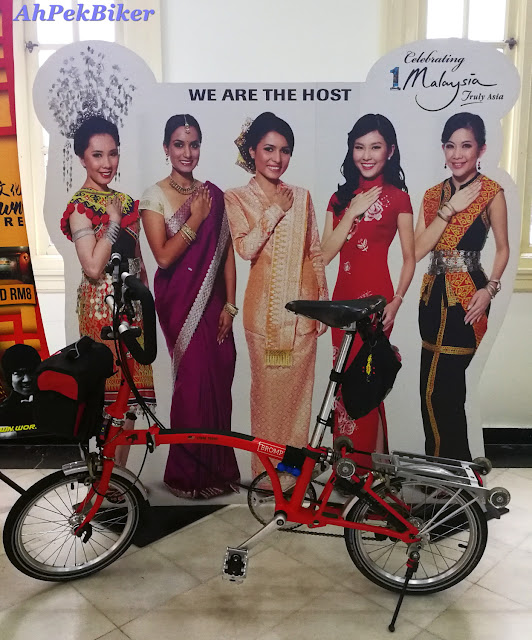 I did a quick stop at MaTiC (Malaysian Tourism Centre), it's a nice place to stop as there is a cozy cafe at the back.
And my bike love these ladies (a Sabahan, an Indian, a Malay, a Chinese and a Sarawakian) who represents the multi-culture of Malaysia; a melting pot of different races, religion and culture that have given rise to the vibrant, colorful diversity of the country. Yes, Malaysia is Truly Asia. 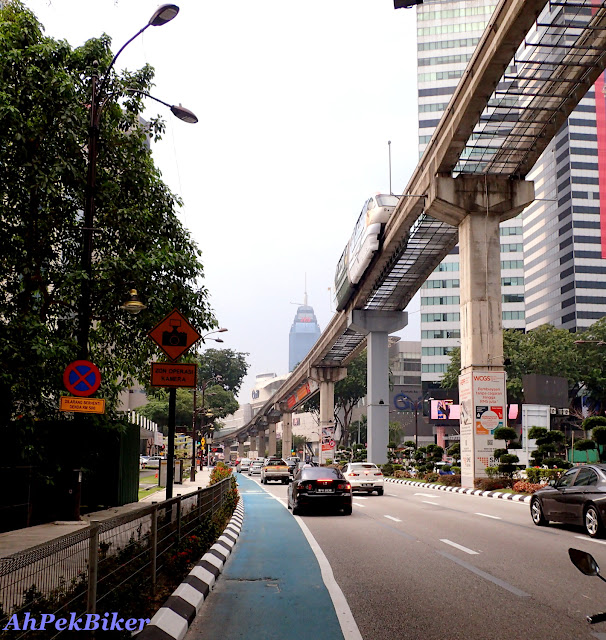 Back on the road at Jalan Sultan Ismail, a train of the KL Monorail runs overhead. 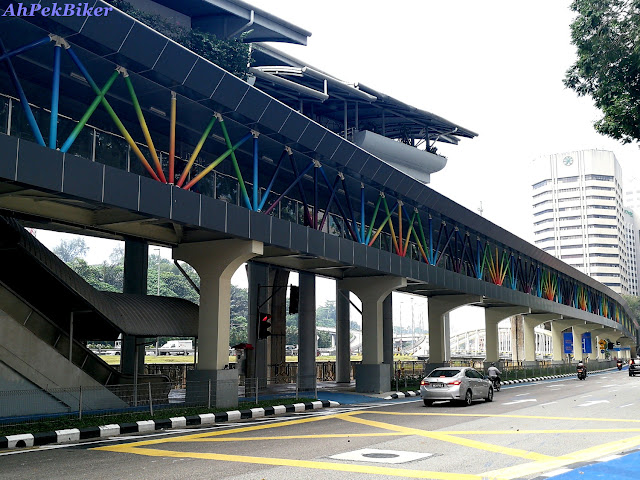 At the Bandaray LRT Station, Malaysia's own version of rainbow bridges, a reference to the many colorful bridges I saw during our cycling tour of Taiwan. We should have more colorful structures like this to brighten up our city. 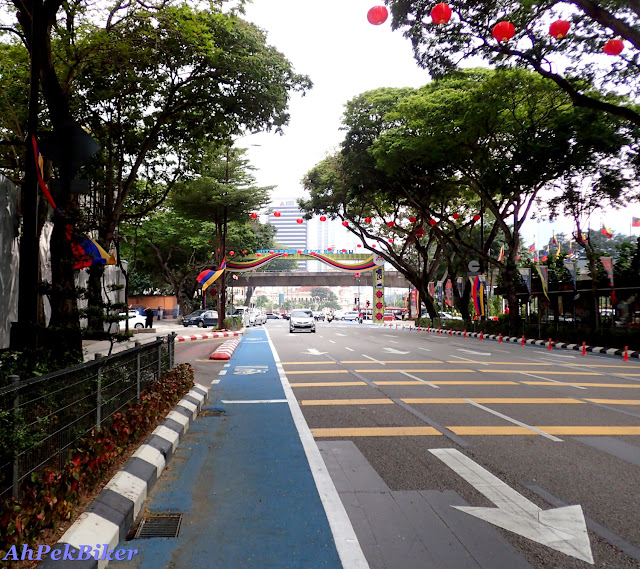 At Jalan Raja Laut there are lanes on both sides, with one running contra-flow. The roads here are shady, conducive for cycling..... I was riding on the contra-flow side when suddenly a city enforcement officer riding a motorcycle on the blue lane came speeding head on, I had to swerve aside quickly. She shouted at me "Salah Jalan!" (meaning I was going the wrong way,against traffic), guess she did not realize that the lane was contra-flow. I forgive her... haha... we are all on a learning curve. 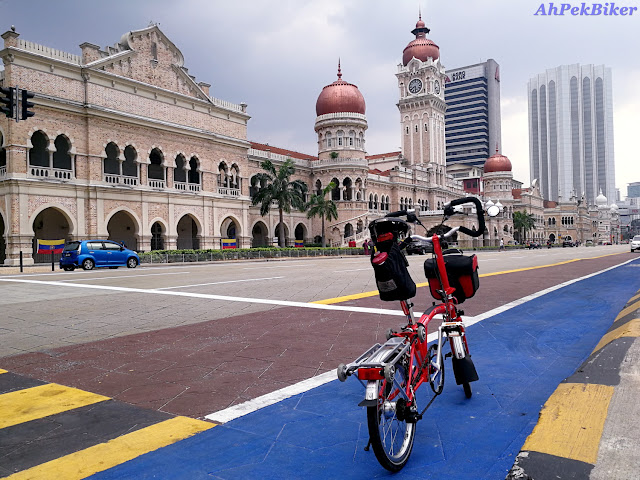 At Jalan Raja, another place I can't help stopping to take photos - the Sultan Abdul Samad Building, a late nineteenth century building of Neo-Mughal/Moorish design topped up with copper domes. Opposite this building is Dataran Merdeka (Independence Square), it was there that the Union Flag was lowered and the Jalur Gemilang (the Malayan flag) hoisted for the first time at midnight (time: 12:00 AM) on 31 August 1957, marking the Independence of Malaya. 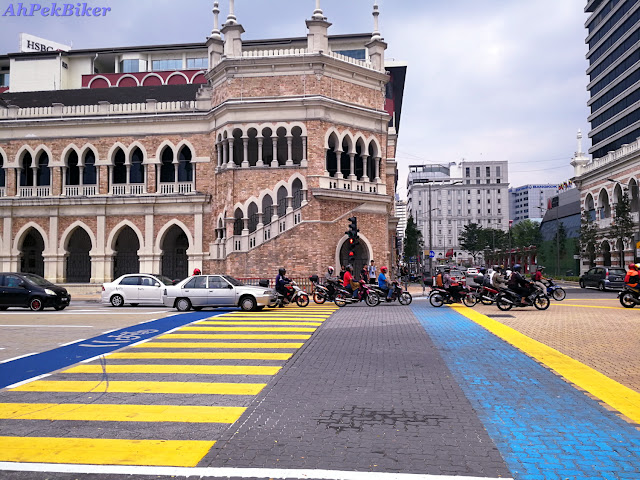 At the far end, the lane crosses back to Lebuh Pasar Besar. Here the newer dark blue lanes runs parallel to the lighter blue one of the Kuala Lumpur's first cycling lane. 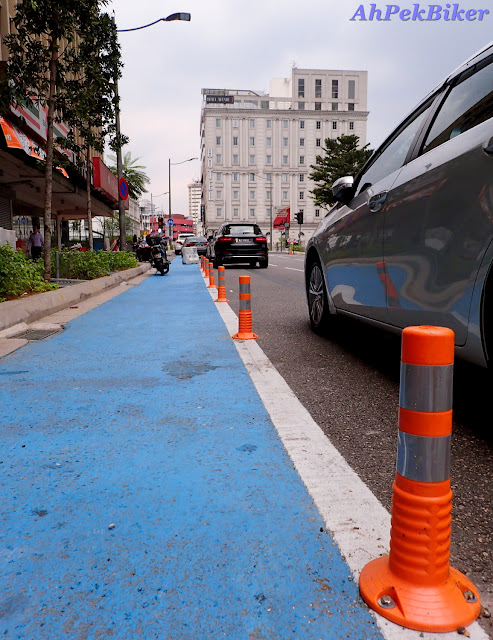 Back on Lebuh Pasar Besar the traffic is heavy and bright orange cones had been put up to demarcate the cycling lanes more clearly. Just a hundred meters ahead is our start point, Medan Pasar.

1. Although these new lanes were built in conjunction with WUF9, we cyclists should be grateful that we have another set of lanes, and bear in mind that these lanes are not a right but a privilege. We should not go around thumping our chests and telling other road users to get off our lanes. We are all on a learning curve and should try to educate other road users on the purpose of these lanes whilst at the same time discipline ourselves not to inconvenience others while using these lanes
2. Trust that these lanes will be well maintained after WUF9, and work towards more cycling lanes in the future so that Kuala Lumpur can become a good cycle-friendly city.