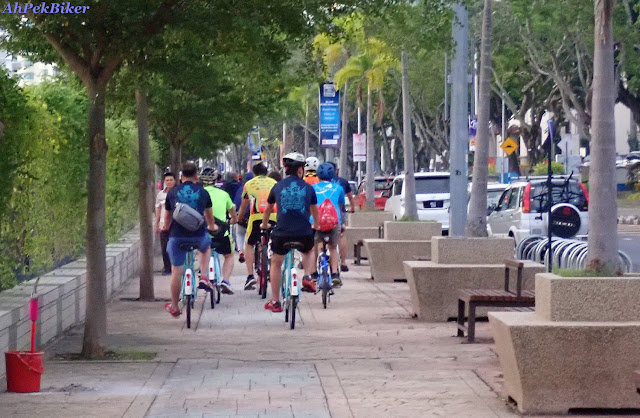 Of late, Penang has two new things: a new Chief Minister in YB Chow Kon Yeow, and new cycling lanes at it's North Coast. The lanes starts from Straits Quay and runs all the way down to the Padang Kota Lama (the Esplanade). It was not that long ago, in August 2013, that the then Chief Minister YB Lim Guan Eng, launched an initiative to provide shared green cycling lanes. Since then, together with this latest addition, we have dedicated cycling lanes on the East Coast that has a new ingenious spiral Bridge of Hope that links the two phases..


Okay, I better correct myself - there were shared cycling lanes here for quite a while, but now these new lanes, that were launched by the Chief Minister, are dedicated cycling lanes. They run partly on newly cast lanes, partly along older pavements, but most of the time they won't be running along the roads. 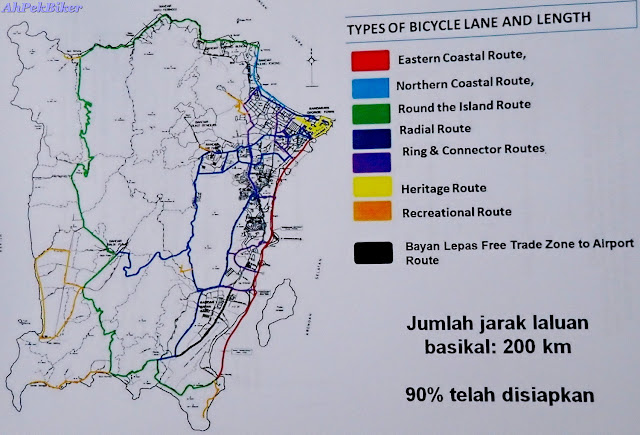 This is the Penang Cycling Master Plan for the development and implementation of cycling lanes on Penang Island. Presently, only the East Coast Route and Northern Coastal Route are dedicated cycling lanes, the rest are shared lanes (although there are short dedicated lanes at Balik Pulau). A total of 200km of cycling lanes are planed and 90% have been completed. That's quite a feat considering that all of this started when the former Chief Minister YB Lim Guan Eng officiated the first launch of the Penang Cycling Lanes just five years ago in August 2013! 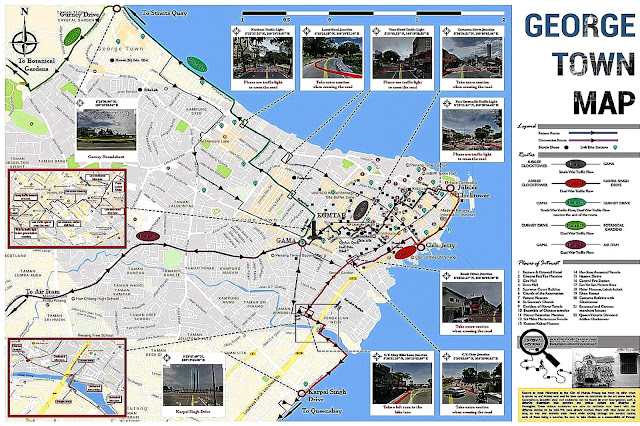 Above is a cycling map of George Town graciously prepared by our buddy Chin Huat, click on it for an enlarged view. It also shows some of the radial lanes that cut inwards into the island. 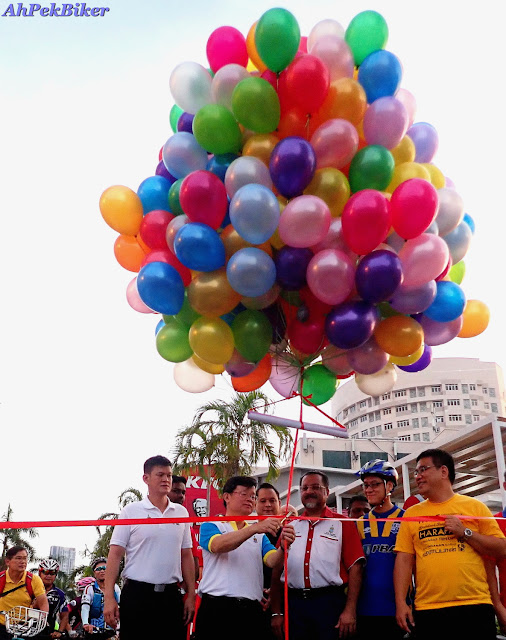 After a informative speech, the Chief Minister cut a red ribbon strung across the new lane. We were all queued behind, eager to try out the new lanes. 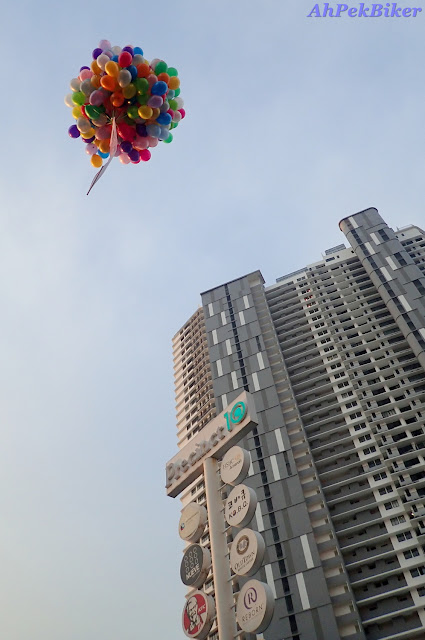 This automatically released a colourful bunch of balloons, ushering in the new lanes with claps all round.
Before we go riding off, here's a map showing the routing of the lanes. It will be a ride on new cycling lanes, yet it will also be a ride through history as the lanes will pass by some of the older colonial part of George Town. 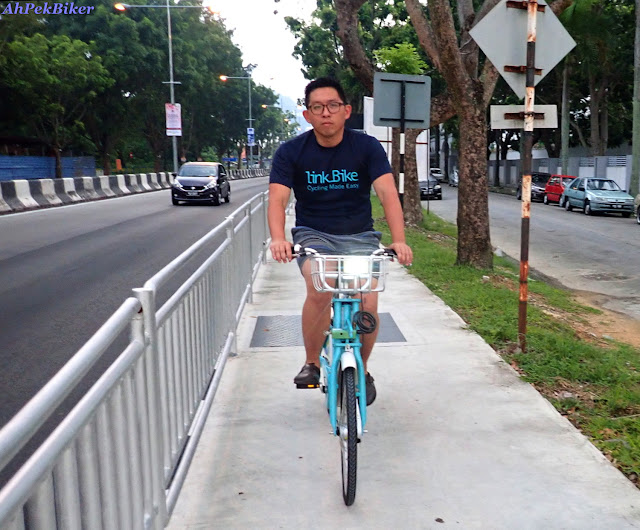 We started off riding on lanes running on concrete pavements along Jalan Tanjoung Tokong, some were newly cast ones. The more important things were the newly erected railings erected at the outer edges, ensuring the safety of all using these pavements. The rider here is from LinkBike, a public bicycle sharing system which serves George Town. 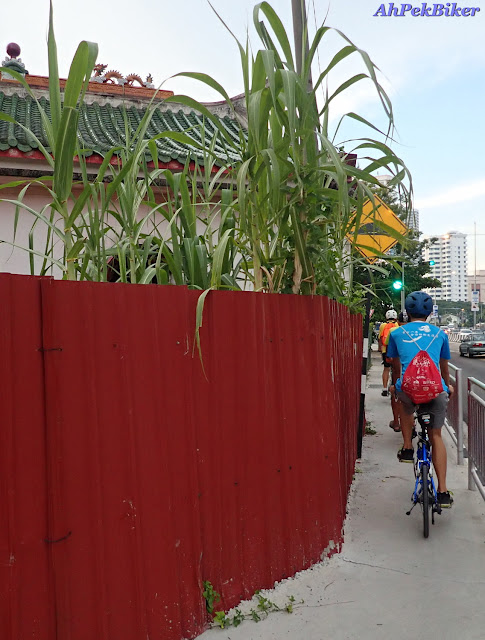 At the Shui Bee Keong Temple (槟城水美宫), the lanes narrowed to a single-cycle width. "Built in the late 19th century, the temple appears new due to the renovations done on it over the years. The original wooden pillars have now been replaced by masonry." It has been here for ages, even before Jalan Tanjoung Tokong was widened to a four lane carriage-way. The road widening took up some of the temple grounds, hence the narrowness of the lanes here; on the temple side red hoarding had been put up. 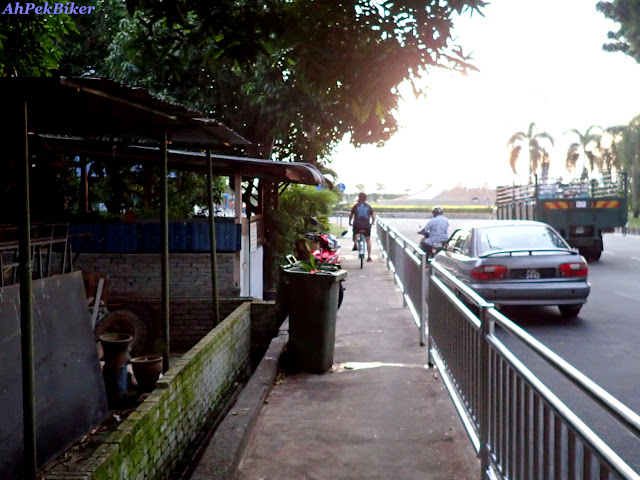 At the next major intersection we made left into Persiaran Gurney (Gurney Drive). This short stretch runs along the rear of some houses of Kampung Masjid Bagan and the residents have been using this as their rear entrance. So do give way to them as actually we have "encroached" onto their egress. 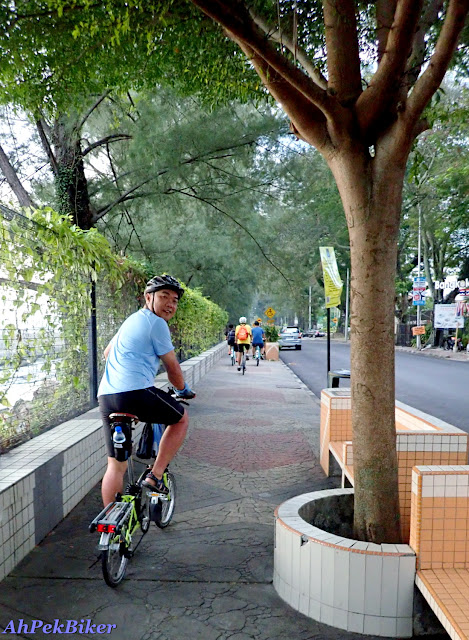 At Gurney Drive, the route goes onto the older pavements running along the seaward side of the road. This is a shared lane, and this area could be pretty busy with many pedestrians especially at night, cycle here with care and consideration of other users.
On the seaward side, green fencing planted with creepers had been put up; these masked the massive 900 acres land reclamation project that stretches from Tanjung Tokong to Gurney Drive. A 24.28 hectare (60 acres) section fronting this present  promenade is expected to be completed by 2020, then there will be no more views of the sea from the old coffee-shops lining Gurney Drive. This 60-acre section will be called the Gurney Wharf - a seafront park which will comprise of four distinct recreational areas - a beach, a coastal grove, a water garden, and a seaside retail food and beverages (F&B) area. Also created will be a 760 acres new island for private housing and commercial development.
Gone will be the present public promenade lined with mobile hawker stalls; to many just sitting at the low walls here and enjoying the sea-breeze were just simple enough entertainment. With the modern park coming up, will these simple socializing be just memories of the past OR will the state government create a similar environment up at the new seafront? For a feel of  Gurney Drive presently or in the past, click here. Read more of this reclamation project here. For a map of the project click here.
By then, hopefully there should be newer and more proper cycling lanes running along the future Gurney Wharf. 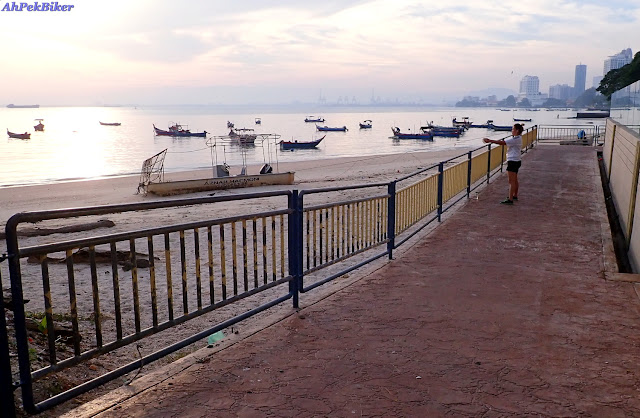 Beyond the far end, just as the road turns right to join Jalan Sultan Ahmad Shah (Northam Road), sampan fishing boats are moored at the seaside. This is my favourite spot of Gurney Drive, it seems like an oasis of calm amid the now more busy and touristy promenade.
Let see whether this little beach will retained together with the sampan, as they will add to the diversity of Gurney Wharf and at the same time provide us a link to Penang's rich cultural past. 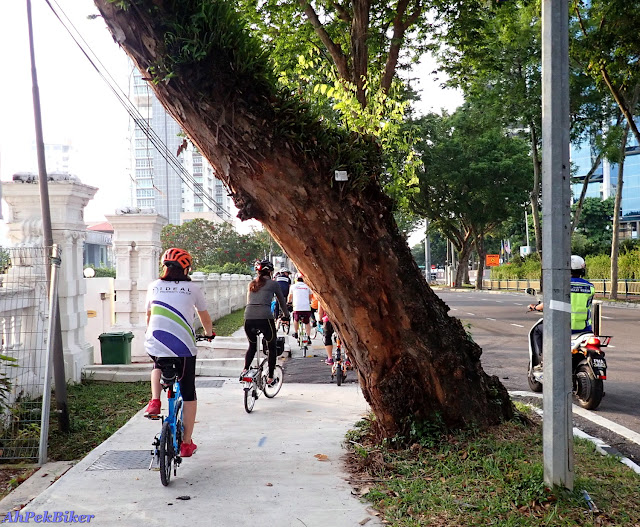 Most of the tall, shady trees of Northam Road were still there and the lanes meandered along below them. At times a tilting giant trunk leans over low and we swerved to avoid them. But we don't mind - the lanes should make way for the trees instead of the trees being cut down to give way to the lanes. These trees have been around for more than a century and have been part of this road scenery for a long, long time. Many of them are as old as, or even older than the large colonial mansions lining the road. 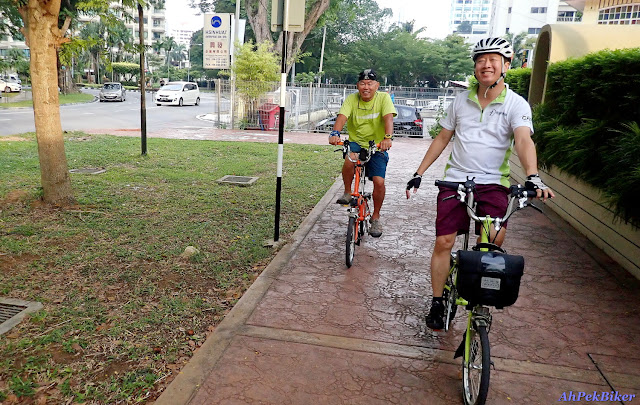 Just opposite Larut Road, the lanes swung away from the road for a short stretch, and then .... 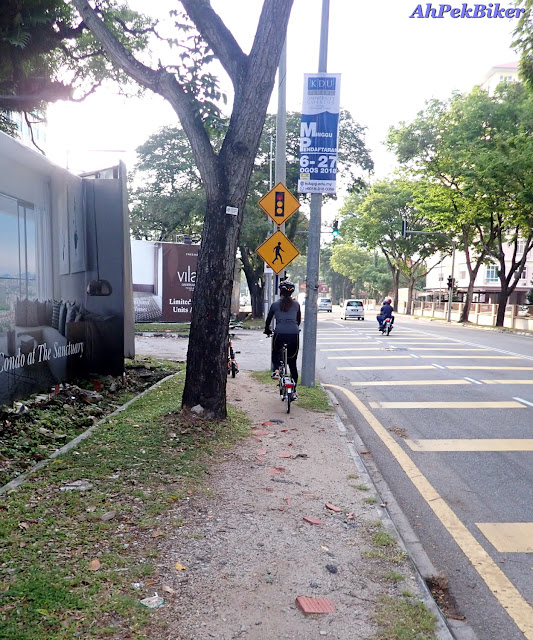 ... the nice lanes disappeared to be replaced by some dirt track. This is a short stretch fronting Runnymede which used to be an army camp. "Runnymede is famous because Sir Stamford Raffles, who later founded Singapore, used to reside there when he was living in Penang." There used to be nice stately colonial buildings here. "These became part of a British naval and military base during the Second World War. Later it came under the jurisdiction of the Ministry of Defence (Mindef) and the Malaysian Second Army Infantry Division was based there from 1986 until 2000". Click here to read more of Runnymede.
Today, the place is just a site of rubble, the stately colonial buildings are no more. They have been unwittingly demolished under the orders of those from Mindef or higher up, those who did not appreciate the heritage value of those buildings. 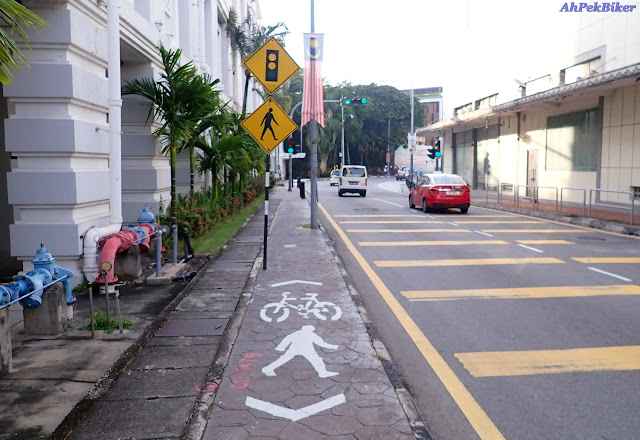 The lane enters stretch at Lebuh Farquhar (Farquhar Street) fronting the E&O Hotel and runs along a pavement with unaligned lamp-posts and street signs. Some of my buddies found it difficult to ride here and went onto the road instead. 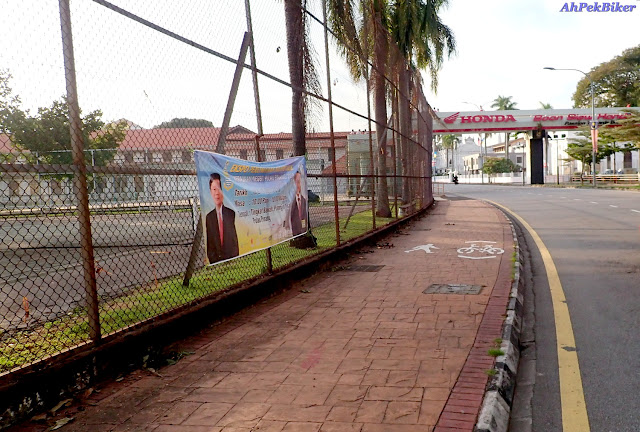 A wider stretch fronts the St. Xavier's Institution school field. It's a unique location for a field as the school is on the opposite side of the road. But it was not so odd decades back as the road was much narrower then, and a traffic warden can easily stop traffic for the kids to cross. Now there is a private pedestrian bridge specially for the school children to cross this busy stretch.
Just before this field was the former Penang branch of the Jabatan Kerja Awam (Malaysian Public Works Department) offices, these buildings too have been demolished. But a more interesting fact was that between the field and the PWD was a road known as Lebuh Leith Gat (Leith Street Ghuat) which gave access for the public to access the beach to do some fishing. Google Maps still show this road, but a hoarding has been put across it barring the public from entering - the poor anglers will have to find another way to get to the sea!
On the other side of the field is Convent Light Street where Farquhar Street merges into Light Street; and at this point the lanes become shared lanes. 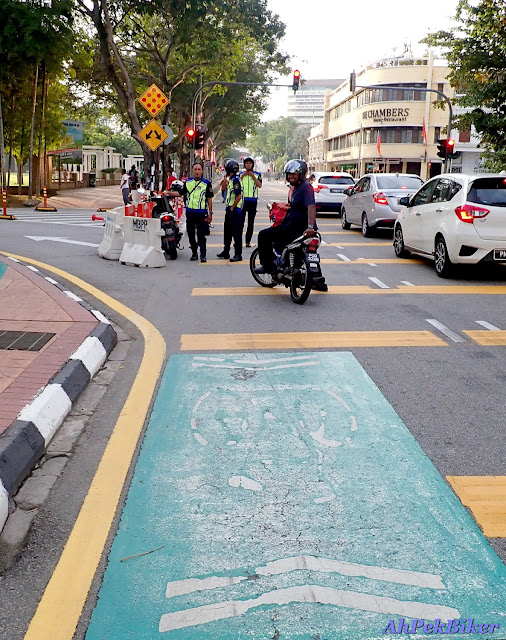 The lanes are shared ones before turns into Padang Kota Lama (the Esplanade). Here the North Coast Lanes ends and merges with the East Coast Lanes.
These shared lanes continue on to join the Penang East Coast Cycling Lanes starting from Pengkalan Weld (Weld Quay). The dedicated cycling lanes of the East Coast starts at the "Crooked Bridge" at the far-end of Weld Quay.

Psssst..... these lanes are a good way to shorten the route between the Jalan Larut junction to Jalan Kelawai as they allow cyling contra traffic on the lanes and thus shorten the ride by avoiding looping up to Jalan Burman and down.


You are at - Jotaro's Blog / AhPek Biker / Cycling Malaysia / Penang / Penang North Coast Cycling Lanes
If you like this, view my other blogs at Jotaro's Blog
(comments most welcomed below. if you like this pls share via facebook or twitter)
Posted by Jotaro Zen at 5:34 AM