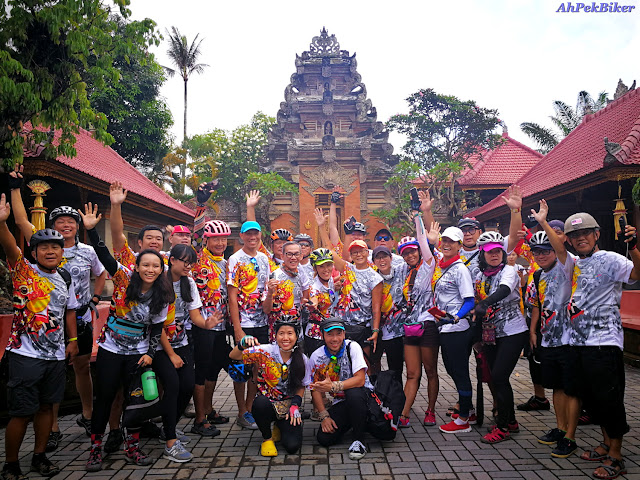 Indonesia is one country that is so near, yet so far. I had always wanted to cycle there, and was supposed to join some friends for a multi-mode tour from Lake Toba to Tanjung Balai in Sumatra earlier this year. But due to personal reasons that tour did not pan out for me while my friends went ahead. We were suppose to fly in from Kuala Lumpur to Medan, take a van up to Lake Toba and from there cycle (over several days) to Tanjung Balai. And then it would then be a ferry trip back to Port Klang and onwards back to Kuala Lumpur.
AND THEN OUT OF THE BLUES came an oppurtunity to ride there. The Brompton Owners Bali (BOB) group together with the Ministry of Tourism Indonesia had organised an event to cycle in Bali and had invited Brompton owners from the region to their event. Bali is one of my favourite spots to visit and I had been on non-cycling tours there several times before.... but to cycle there..... it's an opportunity not to be missed! Many of us promptly registered to join. It won't be a hard-core cycling tour but the organisers did show us a face of Bali which I had not seen before.
A few of us extended our stay to visit the neighbouring Nusa Penida island; so here's our tale (Note: further below are cycling tips, and write-ups on food and places along the route):

RIDE BLOGS
Below are the blogs of our cycling tour, click on the respective photos to read. It was a great cycling tour, so come see our rides:

Here's, some general tips on cycling in Bali, Indonesia, more detailed tips will be included in the day to day blogs:

1. Traffic Directions!
Traffic in Indonesia, is right-hand drive, so cycle on the left. Same thing applies when crossing the road, take note of the direction in which traffic is approaching from!
2. Route & Traffic Conditions
This past few years, Kuta, Ubud and the surrounding regions have developed tremendously and traffic along most roads can be quite busy. Cycle with care and do take note that there are many motorcyclists around. Nusa Penida is a hilly island and many of the roads to scenic spots (such as Kelingking Beach, Angel's Billabong, Broken Beach, Atuh Beach and Diamond Beach) are un-tarred and made up of rough gravel; even the tarred roads have many pot-holes, it is not advisable to cycle to these spots. Even cars don't travel well on these rough roads; as such we rented motorcycles to go there.

3. Weather
The best time to visit Bali is April-June and September, just before and just after high season. It's still dry season, it's slightly less humid, and room prices and villa rentals can be 30-50% cheaper than during high season.
It's also the cooler season with day temperatures averaging around 28°C and night temperatures around 24°C.
We were there during end November, it can get quite hot during this period with temperatures averaging 31°C and 25°C for day and night respectively, so do re-hydrate regularly. Do expect some rain during this time too.
Useful weather forecast sites for the Indonesia is AccuWeather. For more detailed weather, including cloud cover and wind speed, use Weatherspark and Ventusky.

4. Bringing Bikes Onto Planes
We flew Malindo Air from Kuala Lumpur to Kuta, the fare included 25 kg checked-in luggage (inclusive of sports equipment) which was more than adequate for our bicycles. On the outgoing flight our Brompton bicycles were packed into Dimpa bags; while on the return leg we had a second spare Dimpa to pack our cycling gear (jerseys, zippable pants, etc) and also for shopping purchases. Seven kg. of allowable cabin luggage were also included in the fare. Malindo's fare also include free light meals, drinks and on-board video/music entertainment on demand on individual screens.
For Warganegara Mas (senior citizens above sixty) can skip the long queue at immigration by using the Senior Citizens Priority Lanes at both Kuala Lumpur international Airport and Bali (Ngurah Rai) Airport.
A tip, simple but important. Ensure that you DO NOT carry your tool kits or any long/sharp metal objects in your hand luggage. Put your tool kit into your checked-in bike bags. I often seen friends forgetting about this, only to have their tools confiscated at the security checkpoints. Also note that power banks are not allowed to be checked-in.

5. Communicating with Each Other
When travelling in a group it's important to be able to communicate with each other, especially if one got lost from the rest. There are booth selling these just after exiting the arrival hall of Bali (Ngurah Rai) Airport. We opted for Telkomsel's at it provides the best coverage even at many of the remote areas of Nusa Penida, and got their Simpati prepaid sim cards with 10GB of data valid of 30 days at 250k rupiahs. 3G internet is available in the more populated areas but can drop to the slower GPRS or even Edge in remote areas.
Most hotels, motels, home-stays, restaurants, and airports have free Wifi; do note that these free wifi may not be secure and registration could be required. But one can safe on one's mobile data by using these especially for uploading or downloading videos.

6. Communicating with Locals
As Bali, is a favorite tourist destinations, many locals speak fairly good English. At the smaller towns, locals speak some rudimentary English. The older generation speak very little English, so knowing some basic Bahasa Indonesia (or even better - Balinese language) will come in handy and also warm one up to the locals.

7. Accommodations
Bali has a wide range of accommodations, ranging from six-stars hotels, to homestays and even back-packers hostels. If one is not fussy, cheap accommodations can be found on Bali, we got our lowest at 170k Rupiahs per twin-sharing room per night. At Nusa Penida, room pricing is slightly higher. There is no shortage of accommodations and for off-peak season there is no necessity to pre-book rooms.
We were guests of BOB for two nights and were provided first class accommodations at Sthala Ubud Hotel, inclusive of breakfast and dinners. Buses and vans were also provided to transport us and our bikes between several destinations (and airport transfers too!).