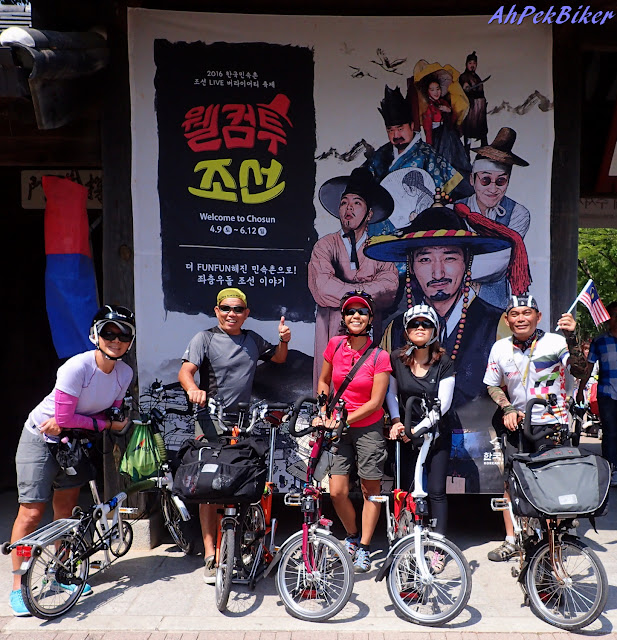 2. Bringing Bikes Onto Korean Trains
Full-sized bicycles are allowed onto the first and last coach of Korean trains on weekends or public holidays. Folding bikes are allowed onto the trains at any time.
Today's journey was more on trains, we did just some cycling and some walking at the folk village. The cycle route from the folk village to the fortress although only 12.5km was not easy as most of the time we had to ride on the pavements which was not that smooth and also had to avoid pedestrians; the was a couple of major climbs at this stretch.
The weather was cool at 24°C to 27°C day time and dipping down to about 21°C in the evening.

5. Food
Lunch was a very delicious stewed pork trotters at the Mapo Restaurant in Sanggal (address: 8 Minsokchon-ro Giheung-gu, Yongin-si, Gyeonggi-do, South Kores; GPS: 37.25498, 127.10578), oddly this was operated by a Chinese. We skipped dinner due to lack of time (see blog for details).

6. Accommodations
Our accommodations in Seoul was at the Seoul 53 Hotel Insadung (GPS: 37.57502, 126.98956), conveniently located at the old part of the city near to the city's many points of interest. Cost per night per room was 49,000KRW and came with a breakfast pack of sandwiches and gimbab rolls. All rooms have Wifi, but the signal was poor for those rooms on the upper floors.
The owner Mr. Park and his son Sean, speaks very good English and were most helpful. He had just taken over the hotel for a week and had done a good job getting very comfortable.
The following are their contacts:
Address: 53 Iksun-dong, Jongno-gu, Seoul, South Korea.
Tel: +82-2-763-3833     Fax: +82-2-7633832
Email address: 53hotelseoul@gmail.com
Web Page: http://seoul53hotel.com/en_index.html.

Our first day in South Korea was a great one of riding along the Ara Waterway, it was a beautiful place to ride, easy as it was fairly flat. With that we looked ahead to greater cycling days ahead.
But for today there will be less cycling as we head out by trains to the south to visit a couple of tourist destinations, but we will still be taking our bicycles along. There was a hitch though, a sort of comedy of errors; read on to see what happened!


Ride Route - Seoul 53 Hotel>Anguk Station>by train>Sanggal Station>Mapo Restaurant>Yongin Korean Folk Village>Hwaseong Fortress>Paldal Buddhist Temple>Suwon Station>by train>Anguk Station>Seoul 53 Hotel.
It was a day of train rides, from one station to the next to change to different lines. We started off by making a mistake and ended up north-east instead of to the south. From the Anguk Station we were suppose to head for the Dogok Station to change to the Bundang Line. We misread and ended up north at the Daegok Station, wasting a couple of hours of precious time! 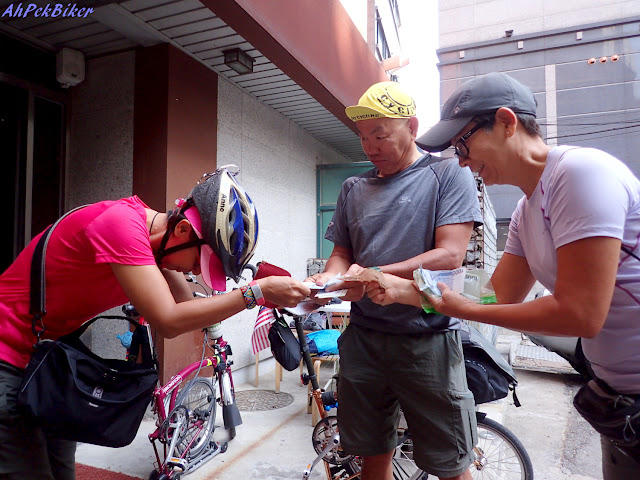 We started the day with a sort of mock ceremony; payment of debts. One of us will settle all major bills for the day, i.e. train fare, food, entrance fee. At the end of the day or the beginning of the following day, we pay back our portion to the "banker".
Here Anne is play acting a mock-up ceremony of payment of protection money to the local triad chief, Sin. Bow Anne.... bow lower! 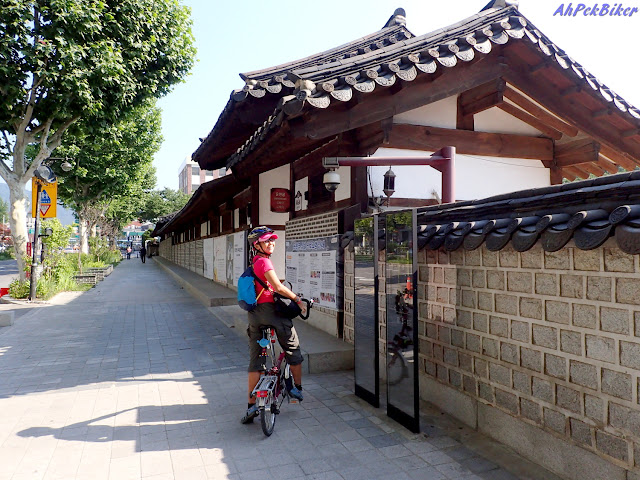 We rode out to the Anguk Station, our route took us pass a stately building which we later found out is the Unhyeonghung, a historic complex with homes for royal & political leaders, now holding events, tours & weddings. 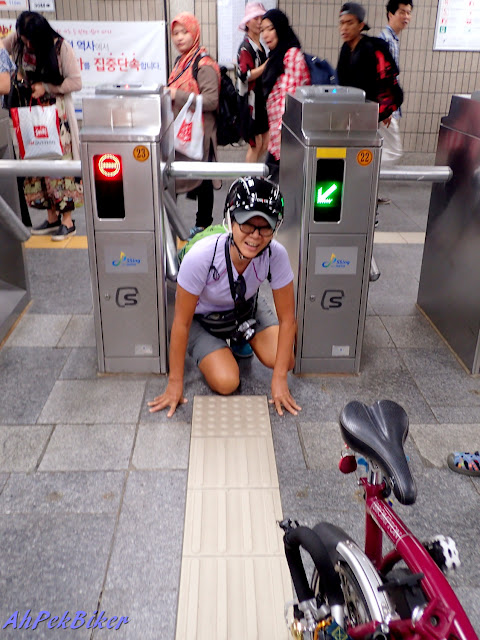 New to the Korean subway system, we had difficulty getting our bikes through the turnstile. Fen after letting her bike through, found the turnstile locked and had to crawl through. We later found out that there is a larger swing gate at all stations for people with large luggage (like bikes... heh.. heh). Some stations also have a separate wider entry for disabled, one without turnstile but with slide-in wing gates.
Today also was a comedy of errors; first error was that we paid the wrong fare of 1,300KRW for a single section travel. Seoul subway system have three main lines (Line 1 to Line 3); if one travel a route that cover two lines it's called a two section route, for which the fare is 1.500KRW. But the vending machine calls it a "2-section travel", they should just call it a "2-line travel" and clear the confusion. When we tried to exit, a buzzer sounded and the turnstile would not move. Unclear of what had happened, we just exited through the manual gate. No, we were not trying to cheat the system, we were innocently unclear. 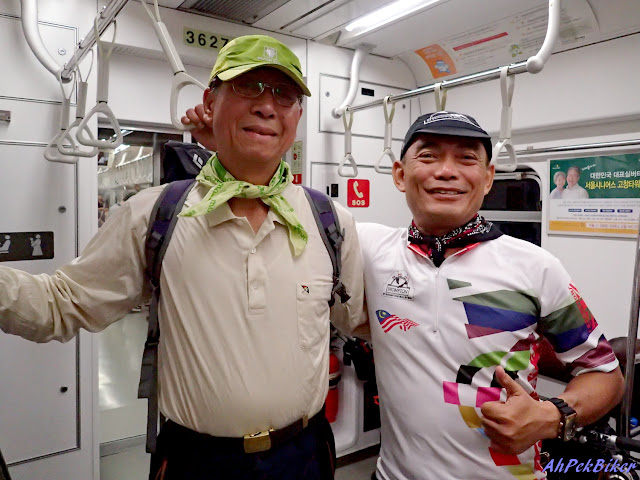 The 2nd of the comedy error, as explained above, was to head in the wrong direction and wasting some time. Looking at the brighter side, we got to enjoy the Korean trains more, and also got to know some locals; like this man with me. He is Mr. Kim, who had worked in Malaysia before and speak English quite well and also know a smattering of Bahasa Malaysia. He is in is late sixties, yet still look healthfully spritely and was on his way to the countryside to do some hill hiking. 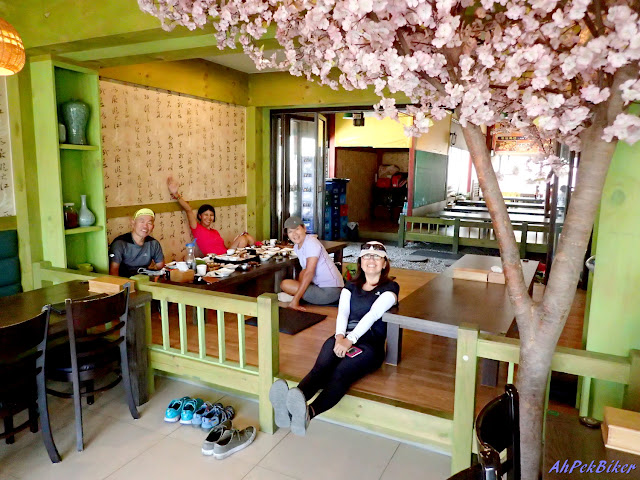 We exited at the Sanggal Station which is the station nearest to the Yongin Korean Folk Village, just slightly more than two kilometres away. Many tourist make the mistake of getting off at the Suwon Station, which is about 12 km. away, and end up having to take a bus to the village.
Our train run around had really wasted our time, it was not 1:00pm.... lunch time! Time to go food hunting. We were lucky, and found Mapo Restaurant which served one of the best food of our tour - stewed pork trotters! 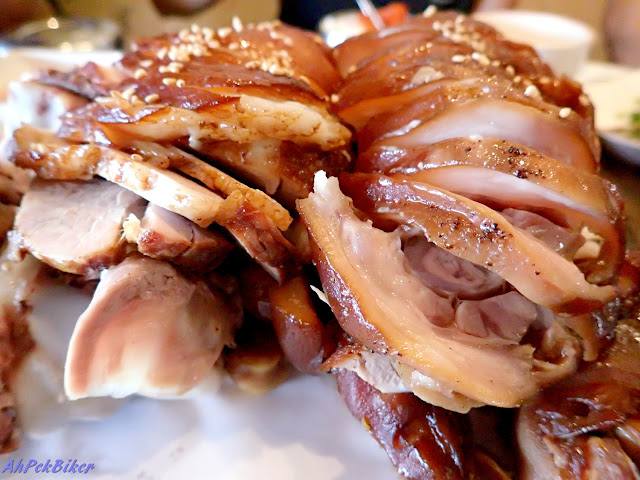 And.... here's the delicious looking pork trotters which was very tasty and surprisingly tender & juicy. I loved it!
Of course, like most Korean meals, it was served with Kimchi and one eats it with white rice or noodles. And the pricing was fantastically reasonable - at only 36,000KRW for the whole meal!
(... read more of the stewed pork trotters) 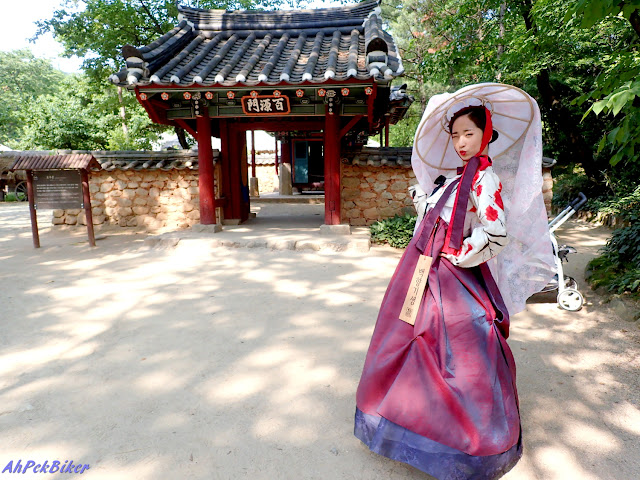 Stepping into the folk village was a step into the past; it was a place of un-paved roads leading to ancient looking houses, pavilions, etc. We were greeted by a lady dressed in a colourful traditional Hanbok, complete with a silky hat... er... she wasn't actually greeting us; she was one of the staff who took part in the several shows that the village put up. She looked so pretty that I just had to go greet her "Annyeong-haseyo! Can I have a photo taken with you?" Sure! and she posed with me with a cheeky wink! Yahoooooo! 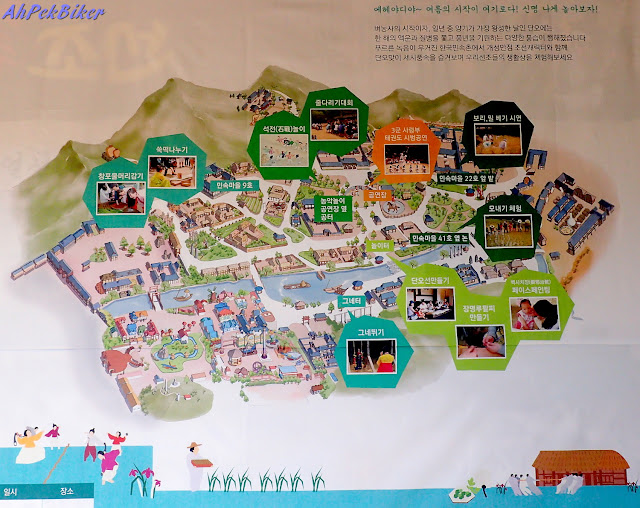 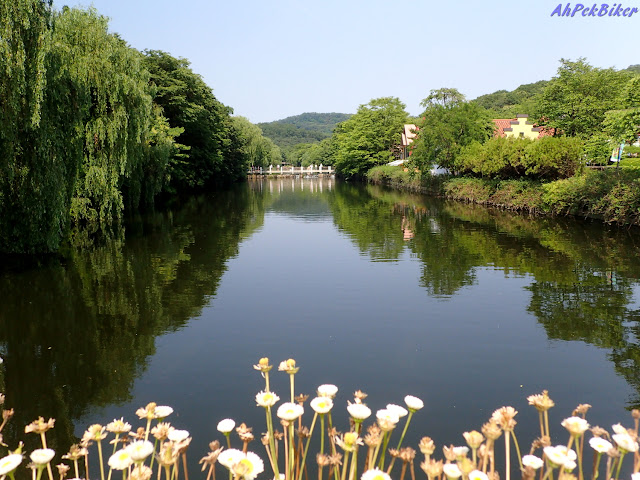 We crossed the stream and it was picturesque, with flowers on the bridge and serene reflections on it's surface. 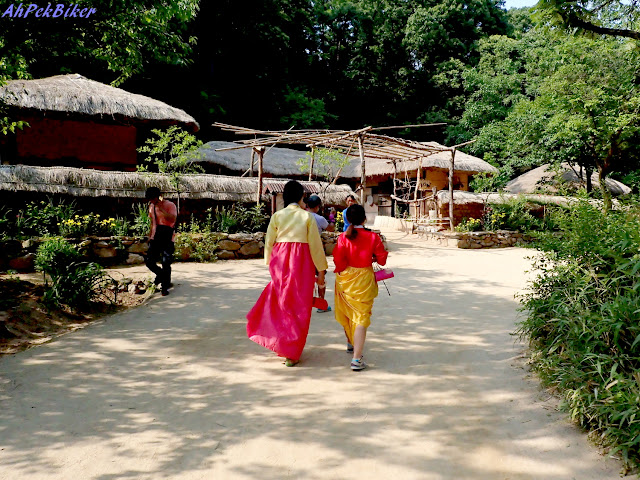 The sandy roads lead to thatched roof wooden houses; these are the houses of the commoners. 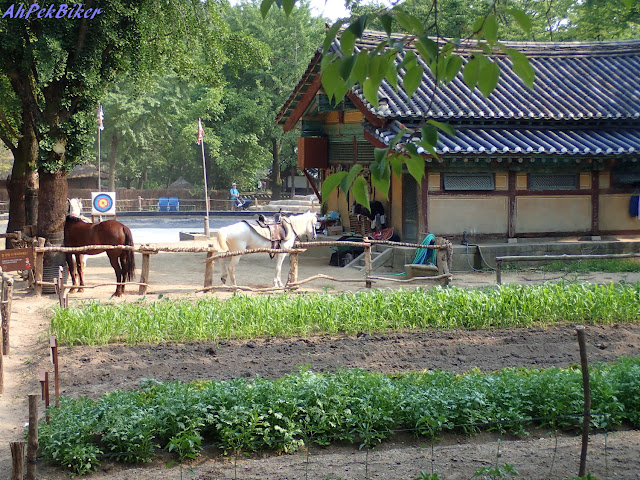 There are also brick building for the elite, officials. This one is a stable where horses are presently kept, these horses are used for one of the daily shows where riders shoot arrows onto targets. In the foreground is a vegetable patch. 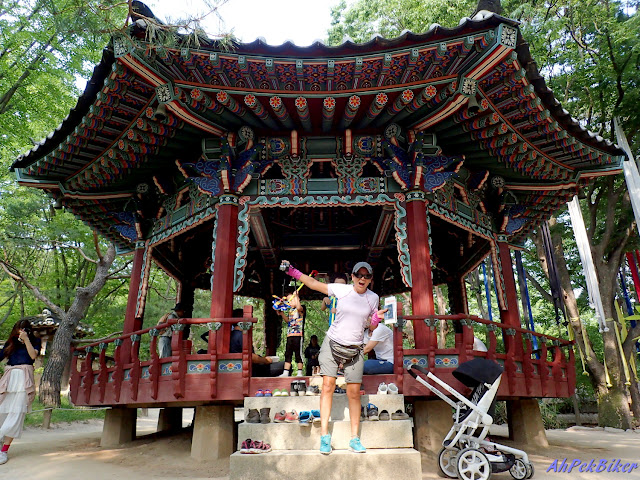 There are also some small pavilions where visitors can take a rest or even have a small picnic. 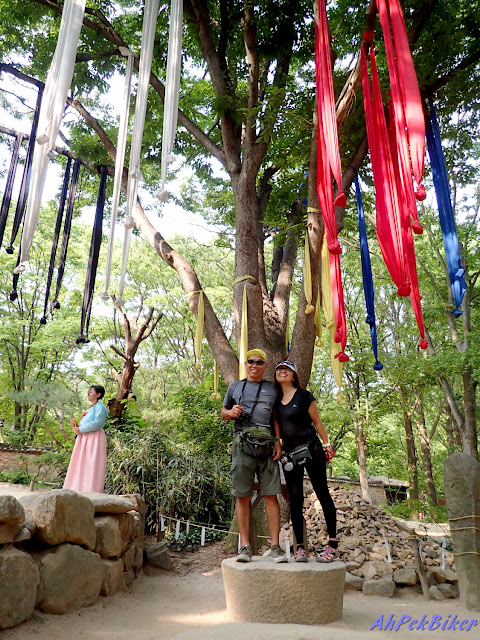 Nearby is the tree with a significance; a Seonang-dang, a pile of stones or tree where people stack tree stones on it as they pass by and make a wish. The cloth on the tree is the five-colour fabric to ward of misfortune. 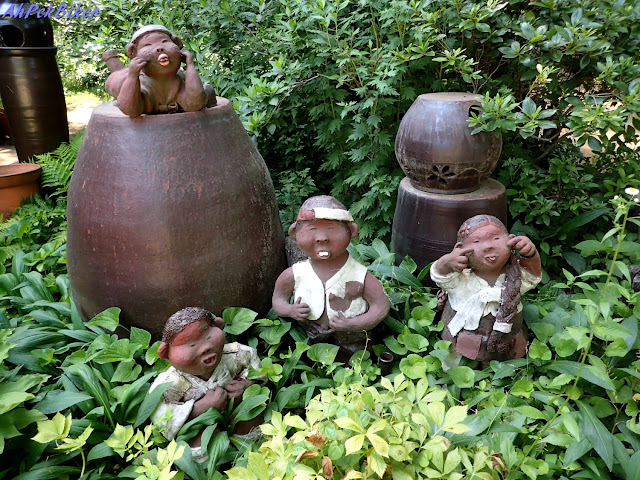 Other than the houses, there are also tradesmen's huts, each a craftsmen excelling in his respective skill. This here is a are pots in front of the potter's hut. Do are see the boy on the right squatting for a crap? Visitors can have hand's on experience making pots, vases guided by the tradesman, for a small fee. 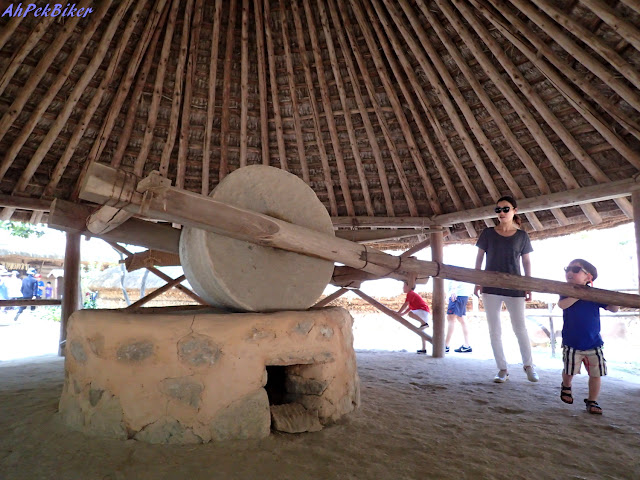 Some hands-on participation are free, like this one of turning a large mill stone. The old crafts must be pretty good, even this small boy could turn the mill stone without too much effort. 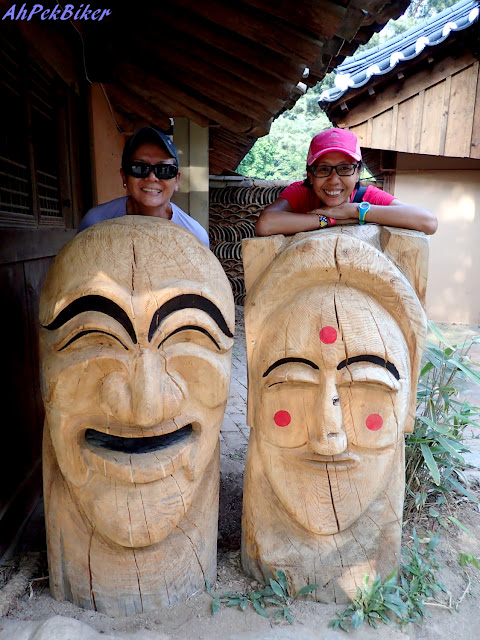 Fenn & Anne having fun at the mask maker's hut. 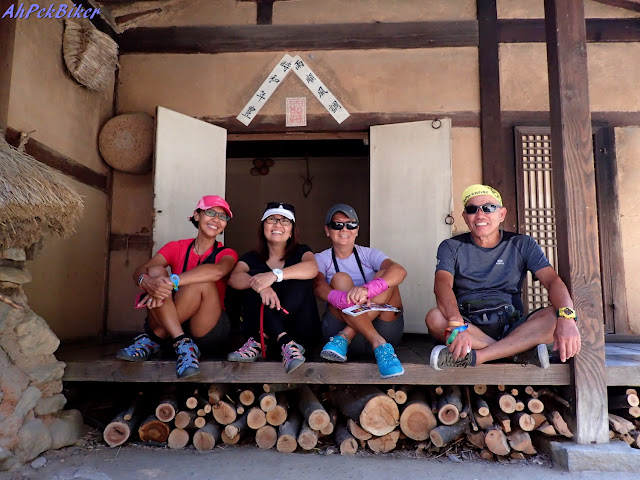 Here's us taking a rest at the blacksmith's hut. with fire wood stacked under the floor boards. 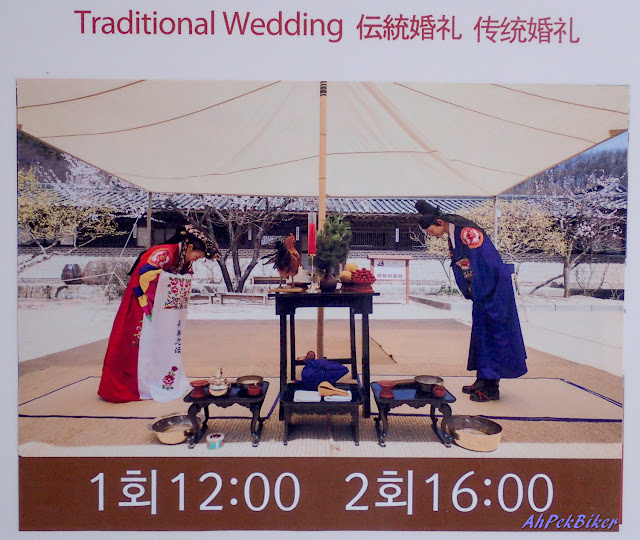 Other than the trade huts, the village also put on regular shows of old practices. We missed the traditional wedding, so I can only show you a poster. 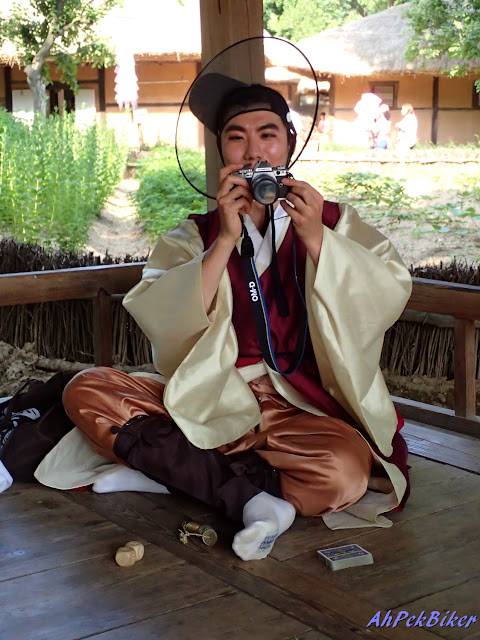 Staff dress up in traditional wear for the various plays and show, this man acting inquisitively about a modern camera... 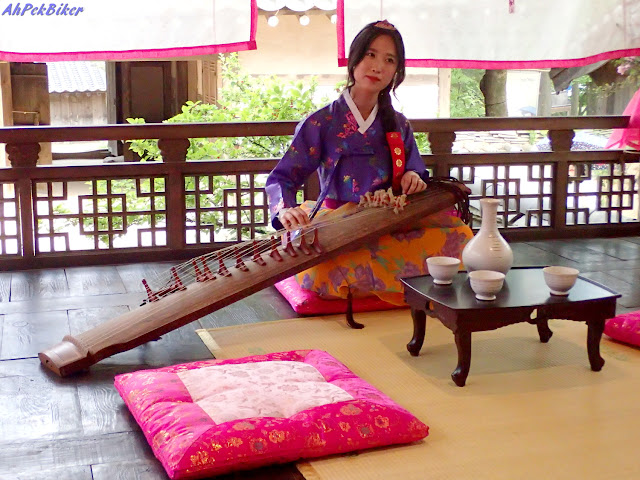 ... and this lady calmly playing a Gayageum to entertain the lord's tea time or perhaps it's Soju time! 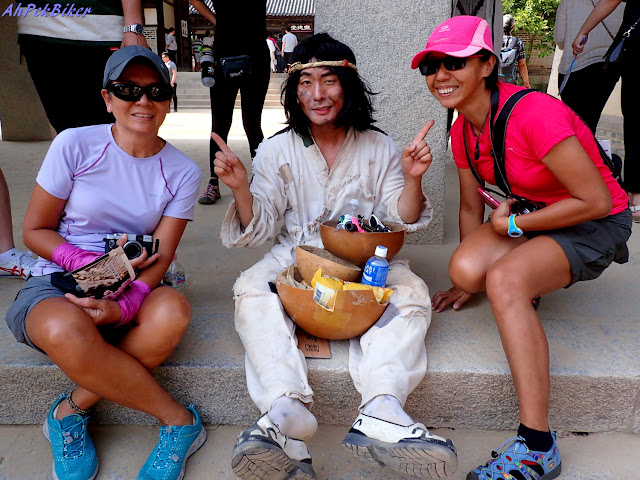 And there's even the village beggar hobbling around and actually asking for money! 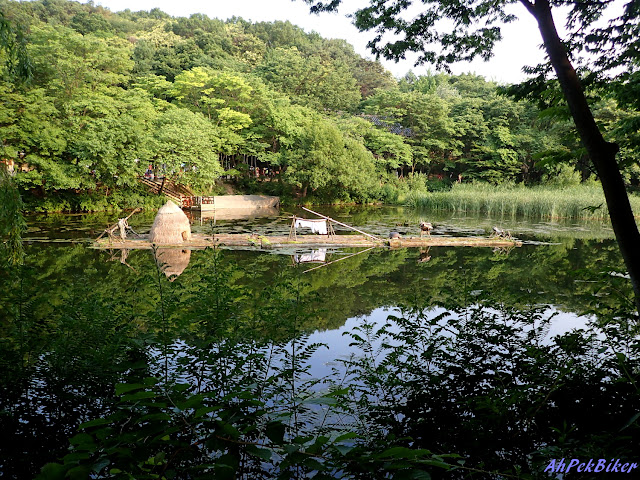 We took a short walk down the riverside; at a spot is this fisherman's raft, complete with a small hut for a long fishing trip. 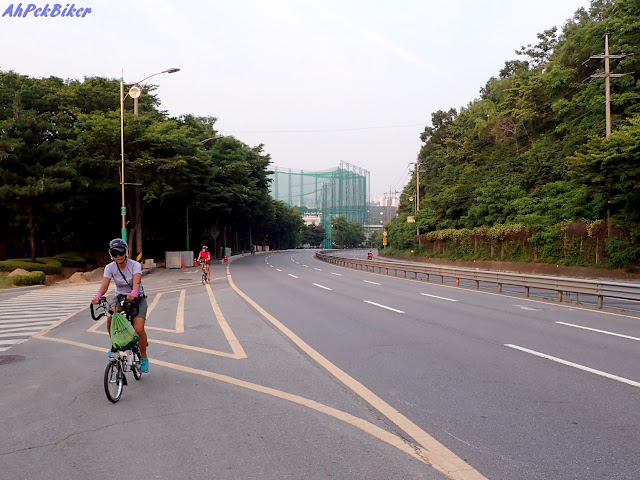 6:15pm - We left the village and headed for Suwon. It's only a 12 km. ride but it would take us more than an hour to reach as most of the time we had to cycle slowly on the pavement, along the uneven paver stones. No wonder we often saw some local cyclists risking it riding on the road. 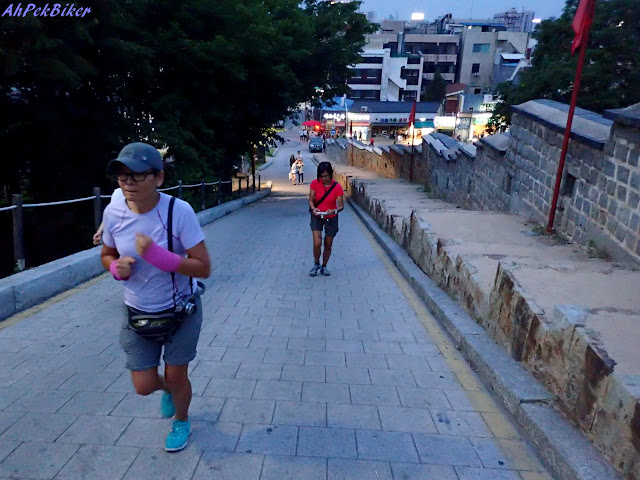 7:30pm - We arrived at the Hwaseong Fortress. The information centre by then had closed (they close at seven) and we missed our chance to have our Heritage Pamphlet stamped.
It was getting dark and the steep steps up was discouraging, so we just climbed some distance up and took some photos. 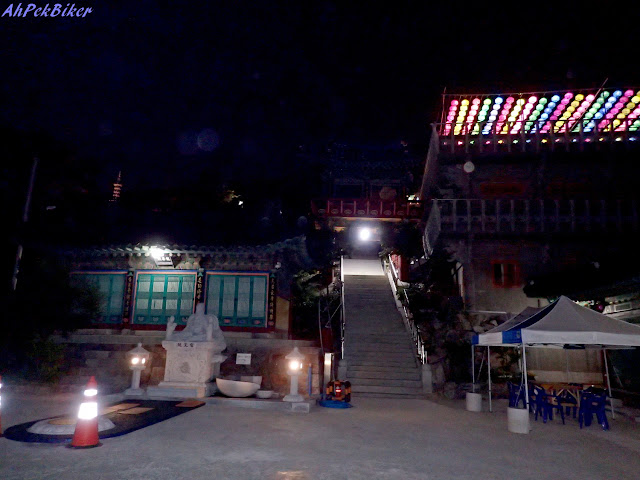 Luckily there was the nearby Paldal Buddhist Temple for us to admire, even at night it was worthwhile visiting. 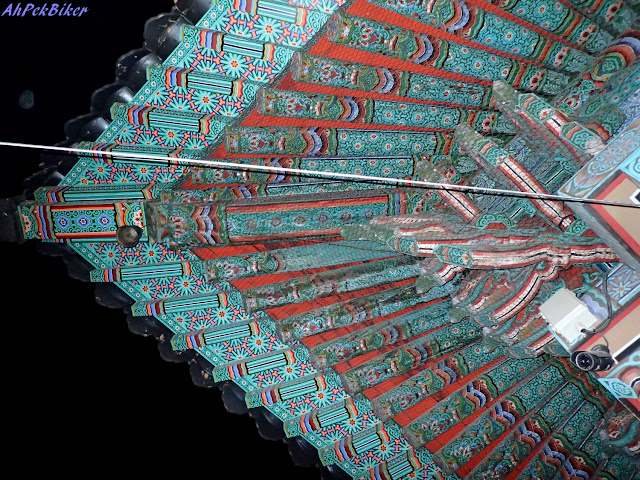 An asymmetrical roof eave of the temple. 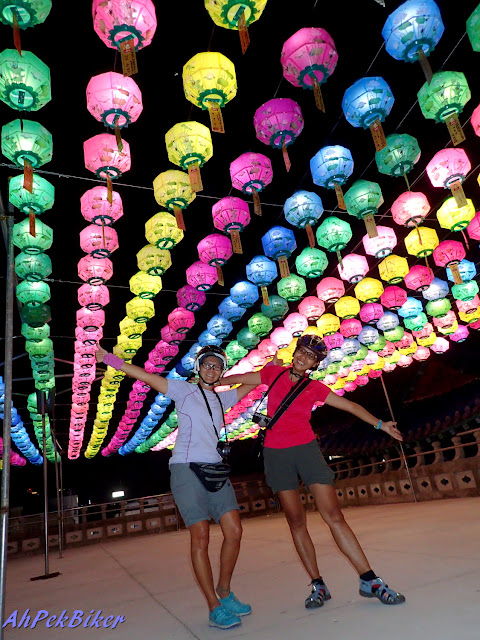 Up at the main temple platform were rows of colourful lanterns, as usual the girls' colours blended in very well. 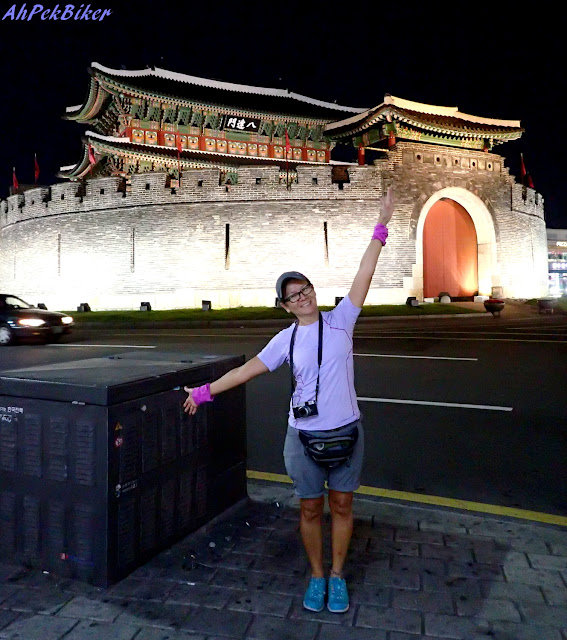 Also nearby, a traffic round-a-bout with a garrison wall and watch tower.
We left and rode to the Suwon Station for our trip back to Seoul.


But the town still had one last thing to show us - it's red light street (at DeogYeong Boulevard 895th Street) where call girls display themselves at shop windows and some at leaning sexily on their doors, sultrily beckoning customers to come sample their wares. I dared not take any photos for fear of repercussions from the local triads, but click here for a video of the street. 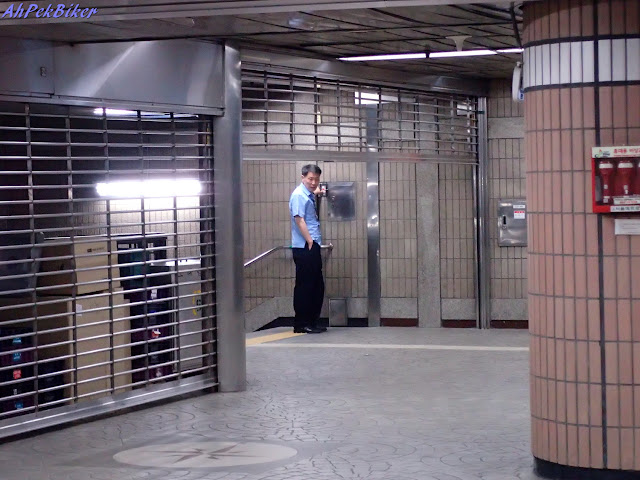 As it was a long train ride back to Seoul with a couple of station changes, we decided to skip dinner. It was a right call, as by the time we left the Anguk Station it was passed midnight and the guard was impatiently waiting for us so that he could lock up the place. Phew!