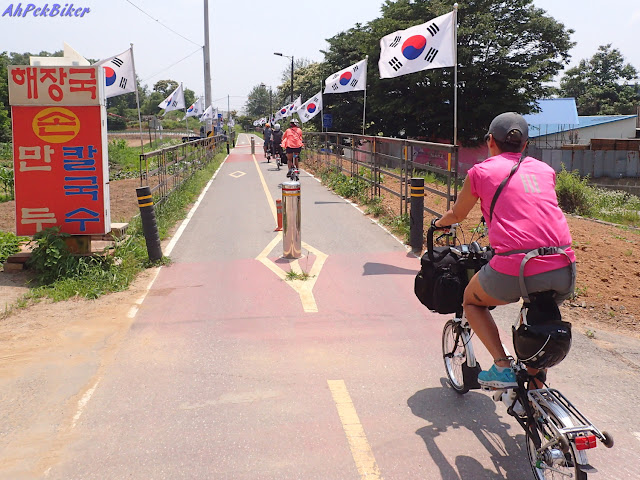 Five of us went on a short cycling tour in South Korea. Our tour took us through the scenic cycling trails of the Namhangang River, and also the trails of the Nakdong River; through the bustling cities of Seoul, Daegu and Busan; it took us by rustic towns and villages, and also a few UNESCO Heritage Sites. Most of the routes were relatively flat but there was some pushing too as some sections were across steep hills. We got to enjoy the good Korean food, met some interesting people, and some quirky personalities too.
Anne and Sin were the tour planners, researching of routes, places to go to, bus & train schedules etc. Sin was the main navigator, marking out the GPS coordinates and using a Garmin Oregon 650 GPS unit to lead us along. Jo & Fenn added colour to the group with their lively laughs and their unique way of taking on the hard slopes. On seeing steep climbs ahead, Jo would be like going "I can't, I can't!" but she still did! I was the assistant navigator with a similar Garmin Oregon 600 GPS unit, and also the biggest eater, walloping to finish the meals we had! Overall we were a good team, clicking well with each other, helping each other and enjoying each other's comradeship.
For all our planning, nothing beats being actually there; feeling the vibrancy of the cities, the soothing calmness of the countryside, and discovering interesting nooks and crannies beyond our planned routes and destinations.
(Much further below are the points of interest that we intended to visit, related blogs, and also tips on cycling in South Korea)

RIDE BLOGS
Below are the blogs of our cycling tour of South Korea together with some other related blogs, click on the respective photos to read. It was one of our best cycling tours, so come ride with us:

Above is the map of our intended routes and destinations which we hope we would be able to cover as much as possible. As in any cycling tour, along the way some interesting detours and detraction came about, and some destinations were missed due to time constraints: read on what we actually did in the daily blogs.

Here's, some general tips on cycling in South Korea, more detailed tips will be included in the day to day blogs:

1. Right is Right!
Korea traffic is left-hand drive. For those coming from right-hand drive countries always do remember to ride on the right-hand side... i.e. Right is right! Same thing applies when crossing the road, take note that traffic is approaching from left! Sounds confusing, it actually isn't, just take while to get use to it.

3. Communicating with Locals
For the uninitiated cycling in foreign lands can be a daunting experience, especially when one can only speak a smattering of the local language or if there is no common language to speak to each other (like English). Most Koreans can hardly speak English, and learning some basic phrases will be helpful. When speaking to Koreans in English, they may initially seem stand-offish but after a while they did warm up to us.
This could be partly overcome by using translation apps like Google Translate. Do install this app into your phone and before you leave on your tour do some basic translation as it will be saved onto a list of recent translations.
Memory-resident translation apps like Learn Korean by Wingsapp & Korean Flashcards by Bravolol were useful apps we used from Google Play Store.are also useful; they give translations of basic terms.
Look out for the tourist information booths at airports, railway stations or bus stations, the guides manning the booths speak very good English and do give good tips on where to visit, directions, train and bus schedule. It's good too to have these guides write the intended destinations in Korean so that one can show to other locals in order to get our bearings right.

4. Communicating with Each Other
When travelling in a group it's important to be able to communicate with each other, especially if one got lost. At the Incheon International Airport pre-paid sim card can be surprisingly obtained from a convenience store at the first floor for 29,000 KRW with a 1 gig data, 100 minutes of call time. A lady working for the phone company waits outside at the benches to help set up and activate the line, and presto! within minutes it's done.
Or one can pre-order online through mobile providers such as Evergreen EGsim and collect at their outlet at the airport. They have several plans to select from.
Save up each others local phone numbers once that is done. Create a chat group so that general communications can be broadcast, eg. where and when to meet to start the day.

5. Service Your Bicycles & Carry Tools and Spares
Before leaving on your tour, it will be good to service your bike and bring along some spares like tubes, puncture patches, brake pads with the relevant tools.

6. Navigation
Unless he or she is very familiar with the locals routes, the tour leader should carry a GPS units. It will also be good if another member of the team carry another GPS unit should the leader's one go faulty. We had pre-loaded the South Korean Map together with GPS coordinates of our destinations. These units are useful, but do study the proposed route made by the unit as sometimes these are longer loop around; OR sometimes there are parallel narrow lanes that can be used and these lanes can sometimes turn out to be more interesting.
Surprisingly, in most part of the country, Google Maps don't seem to work well for cycling or even walking - it seem to propose a route that goes onto buses or trains!

7. South Korea Road & Traffic Conditions
Generally, the road conditions of the highways and main roads in South Korea are in excellent conditions with few pot-holes. Most towns have well planned dedicated cycling lanes or shared lanes. But cycling on highways is a no-no.
Local motorists, especially the taxi-drivers, are an impatient lot and unless a zebra-crossing is signalised, most don't bother to stop to let pedestrians or cyclist pass. In fact at un-signalised crossings we had to slowly edge our way out to stop oncoming traffic in order to cross.
Do watch out for the delivery motorcycles in the larger towns, most of these are huge bikes and they ride across zebra-crossing and onto pavements, disregarding the safety of pedestrians!

8. Accommodations
Accommodations are relatively easy to come by in most towns, but just to play it safe we did pre-book ours for the larger Seoul, Daegu and Busan. Wanting to experience Hanok style living we also pre-booked the Hanok Sodamjeong in Gyeongju through Booking.com.
In the other towns we went hunting for accommodations at motels when we arrived. We just looked out for the Motel sign or the sign that has a television in the Korean characters 모텔  (that's Anne's tip). Most of these are Korean love motels charges between 30,000 to 40,000 KRW per room per night. The rooms are big, comes with wifi, good facilities such as fridges, complimentary drinks, etc., a couple also had Jacuzzi in the bathrooms. Generally, these motels are love-nests for couples and came with a happy packs that had condoms, and other accessories for the couples happy night (hahahaha.. but it's true!)
If one can speak Korean, it could be possible to pre-book these motel rooms, otherwise accommodation is not a major worry.

9. Food
Food is easily available, there are eateries offering various Korean food. A moderate meal is affordable, costing between 5.000 to 10,000 KRW per head. Good meals such as good Han-u beef or pork ribs cost more but are not that expensive.
All towns have 24-hour convenience outlets such as 7-Eleven, CU or GS-25 which offers a good range of pre-packed food. We especially like the Bulgogi beef burgers.

10. Booking Air Tickets
We flew into Seoul Incheon Airport and left via Busan Gimhae Airport. When booking through AirAsia we noticed that it was better to book via a single booking their multi-city (i.e. Kuala Lumpur to Seoul & Busan>Kuala Lumpur) option than two separate bookings. Under the multi-city option, the purchase of sports equipment luggage was 50% cheaper for the return flight.
Also we purchased a higher sports equipment weight of 25 kg. (which cost just RM15/= more than the 20 kg.) This allowed us to check in another bag with our clothes; but make sure you pack in your helmet, cycling jerseys, shorts, etc. so that it IS also sports equipment.

POINTS OF INTERESTS
Below are the points of interest that we had planned to visit (together with their GPS coords), we did manage to see most of them, others we had to miss due to lack of time:


do allocate a day there. All the above is in or around