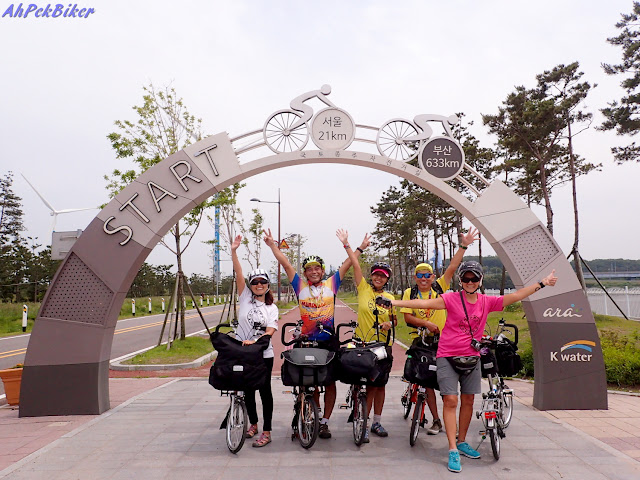 2. The route is fairly flat with a climb up to the Mapo Bridge which leads through a tunnel to reach the other side of the road. After that, there was a couple short steep climbs at a apartment residential area. At busy roads where there is no dedicated cycling lanes, cycle on the pavements, but do watch out for pedestrians. Often these pavements are bumpy, so ride with care.
It was summer, and the day time temperature ranged from 24°C to 27°C with a light breeze it just nice for cycling in shorts and T-shirts. The evening temperature dropped down to 21°C with a stronger breeze made it chilly, but this was still manageable without having to wear thick clothing.

4. Points of Interest
- The Ara Waterway with it's beautiful foliage and colourful flower growing on the banks of the canal.
- The many parks along the waterway, where camping is a boon during summer weekends.
- the Ara Maru Observation Deck with floor of glass to peer through & the artificial waterfall next to it.
- the Duri Eco Park, a larg park very suitable for camping.

6. Food
Lunch was at a Bibimbap eatery at the airport, it was not too bad.
Dinner was at a traditional eatery serving seafood. We had octopus (Sannakji) but did not take them alive; although these were alive just before there were boiled.... ughs!

7. Accommodations
Our accommodations in Seoul was at the Seoul 53 Hotel Insadung (GPS: 37.57502, 126.98956), conveniently located at the old part of the city near to the city's many points of interest. Cost per night per room was 49,000KRW and came with a breakfast pack of sandwiches and gimbab rolls. All rooms have Wifi, but the signal was poor for those rooms on the upper floors.
The owner Mr. Park and his son Sean, speaks very good English and were most helpful. He had just taken over the hotel for a week and had done a good job getting very comfortable.
The following are their contacts:
Address: 53 Iksun-dong, Jongno-gu, Seoul, South Korea.
Tel: +82-2-763-3833     Fax: +82-2-7633832
Email address: 53hotelseoul@gmail.com
Web Page: http://seoul53hotel.com/en_index.html.

8. Phone Sim Cards
For staying in touch with each other, it will be good to get local sim-cards. At the Incheon International Airport pre-paid sim card can be surprisingly obtained from a convenience store at the first floor for 29,000 KRW with a 1 gig data, 100 minutes of call time. A lady working for the phone company waits outside at the benches to help set up and activate the line, and presto! within minutes it's done.
Or one can pre-order online through mobile providers such as Evergreen EGsim and collect at their outlet at the airport. They have several plans to select from. 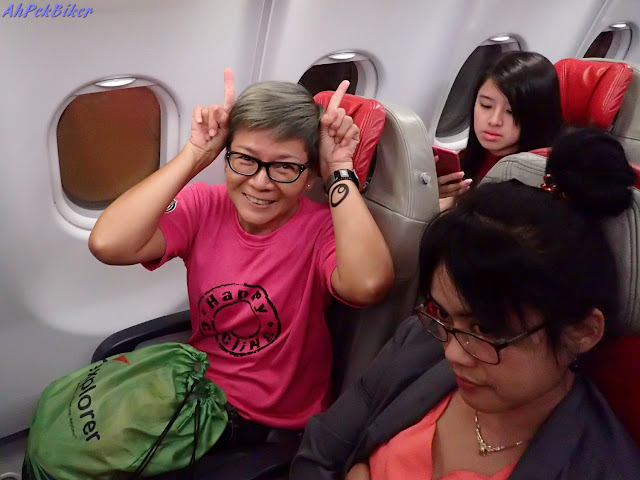 9:00pm (the previous night): We were up at KLIA2 for our 1:00am Air Asia X flight to Seoul; going early was good as it gave us ample time to check in our bicycles, and if any problems arises, then there is time to spare. In fact, Jo & Sin had some difficulty getting to the airport. They usually take the ERL from the KL Sentral Station, but unfortunately the ERL had broke down (and no prior announcement were made). There was a made rush for the few taxis that were available; and on finding one, it was a slow crawl to get out of the city's evening jam. They just made it on time to check in.... Phew.....
We were in high spirits, for most of us it will be our first trip to South Korea, and having heard much of the good cycling infrastructure there we were all looking forward to stretching our cycling legs there. 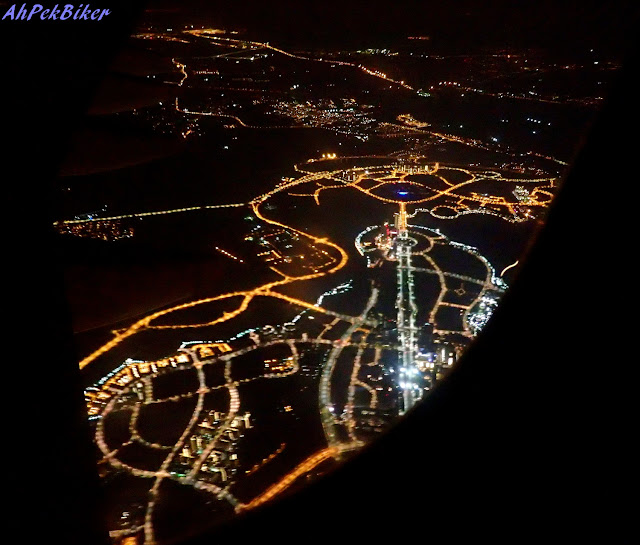 The flight took off, peering down I could see the beautiful night lights of Putrajaya's Core Island Boulevard. Goodbye Malaysia; we are going to miss you. 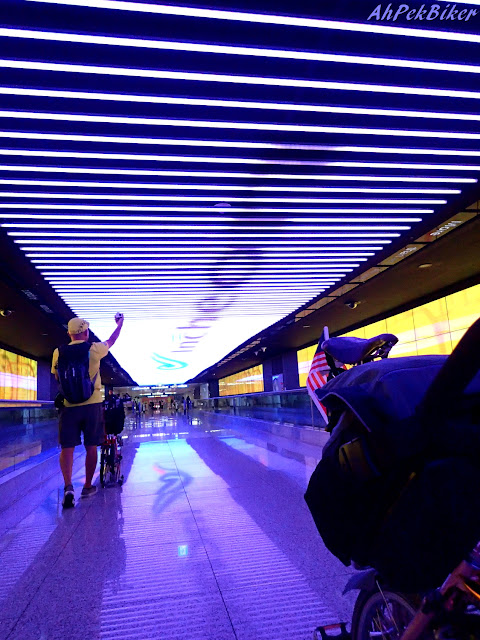 11:00am: Arrived at the Incheon International Airport, our walk down a brightly neon-lit corridor gave us a glimpse of what is to come... our hearts were thumping in excitement. 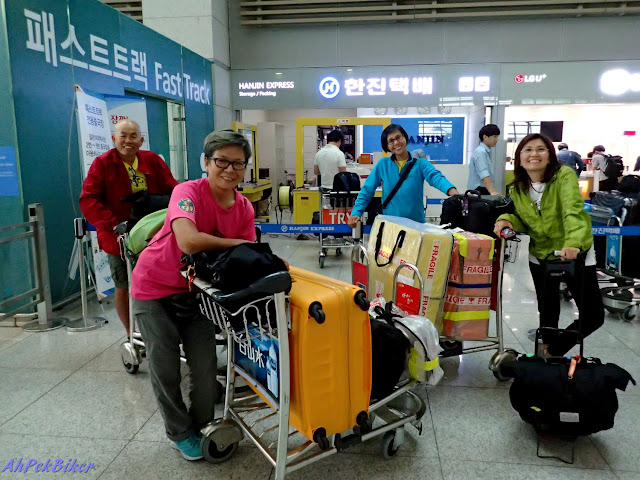 After clearing Immigration and collecting our bikes; the first thing to do was to go to a courier service office; YES, you heard right, a courier office. There was one operated by Hanjin Express at the far end of the first floor of the terminal building. We all unpacked our bikes, kept the bike bags and protection boards (... see packing the Brompton for air travel blog)  into Fenn's yellow hard-case bike bag, and then had it fowarded to our Busan home-stay (we would be flying back from Busan). Beats having to carry those bags around, ya?
Next was to get local sim cards for our phones and then have a Bibimbap lunch at an airport outlet.


Cycling Route - Kuala Lumpur>(by flight)>Incheon International Airport>(by train)>Cheongna International City Station>Ara Waterway>Mapo Bridge>Seoul 53 Hotel.
The route actually starts from the Cheongna Station, crossing over to the scenic Ara Waterway cycling trail and the across the Mapo Bridge. After which it was cycling on pavements of the city's roads.

Our riding legs were really getting itchy... perhaps even twitching! From the airport we took the AREX airport train (... click here for guidelines), and at the first opportunity, i.e. the Cheongna International City Statitionn (train fare was 2,400KRW per pax), disembarked to start cycling..... Yahoooooooo! 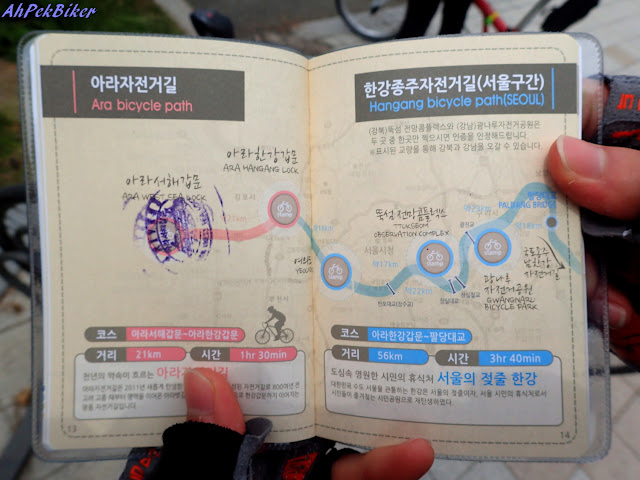 Our first destination: the Ara Tower Observatory to get our Korea Cycling Passport (at 4,500KRW). Although we won't be completing the whole of the 4-Rivers Cycling Trail, it would be fun to have the optional passport as it gave some target destinations to head for by leading to the stamping certification booths or centres. The passport also indicates distances between booths and some points of interest along the way.
Our first two stations were the Ara West Sea Lock (GPS: 37.55836, 126.60753) and the Ara Hangang Lock (GPS: 37.59921, 126.80019). The second one was harder to locate as to reach it one had to cycle through some industrial area. 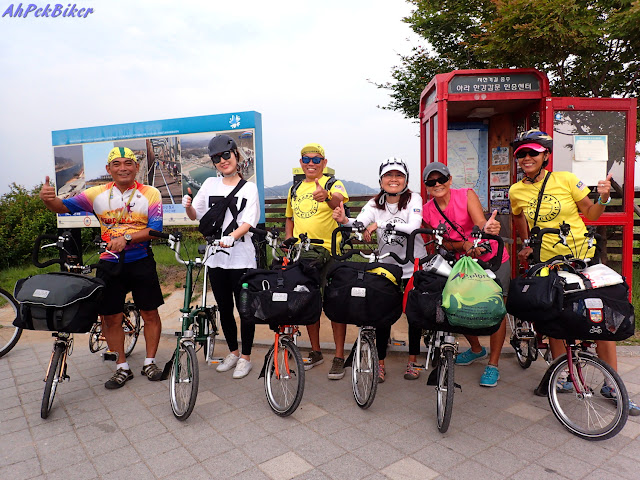 The certification boots are easy to identify (although at times not that easy to find); they are bright red phone booths inside which are no phones but rubber stamps for stamping the passport at the relevant positions. One may have to stamp hard as often the ink-pads at these booths run dry.
Here we are at the Ara Hangang Lock booth, posing with a pretty Korean Brompton cyclist... photo taken by her boyfriend (heh.. heh... we got her all to ourselves then).

The Ara Waterway Cycling Trial was a good introduction for cycling along the 4-Rivers Cycling Trail. It was a relatively flat route with many scenic and picturesque locations, we stopped ever so often to snap photos after photos! 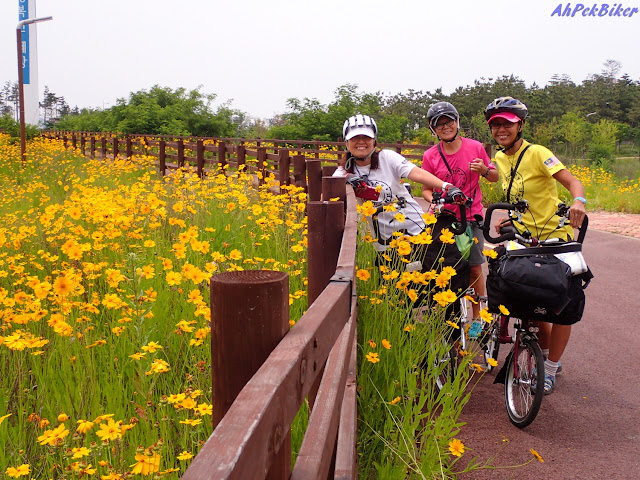 Yellow blooms next to a timber railing. The temptations to pick these flowers are strong, but it's best to leave them there for others to enjoy too. 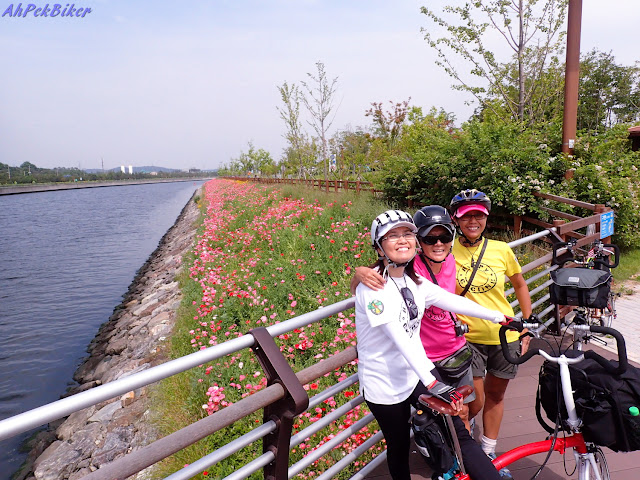 Pink flowers along the banks of the canal. 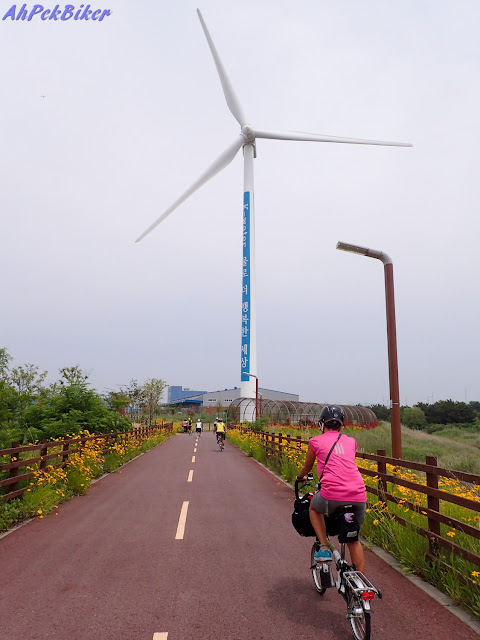 A couple of giant windmills slowly spinning near the start of the route. 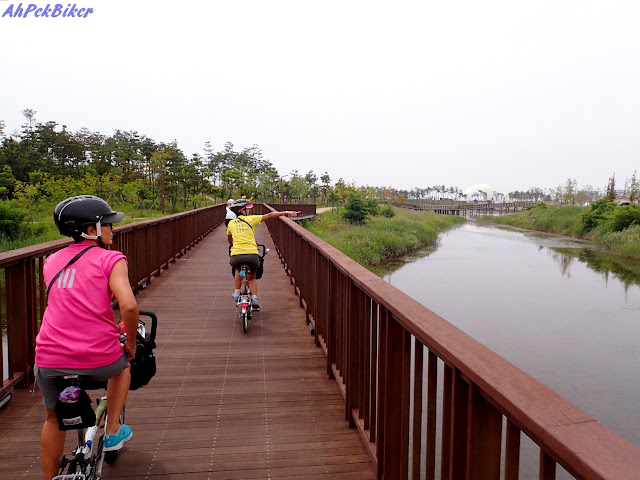 Boardwalks to cycle on... and what was Anne pointing at? 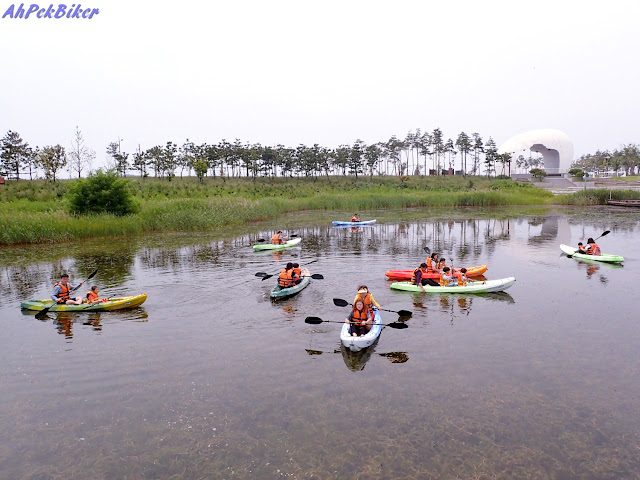 This! People paddling colourful canoes at a pond of clear water. 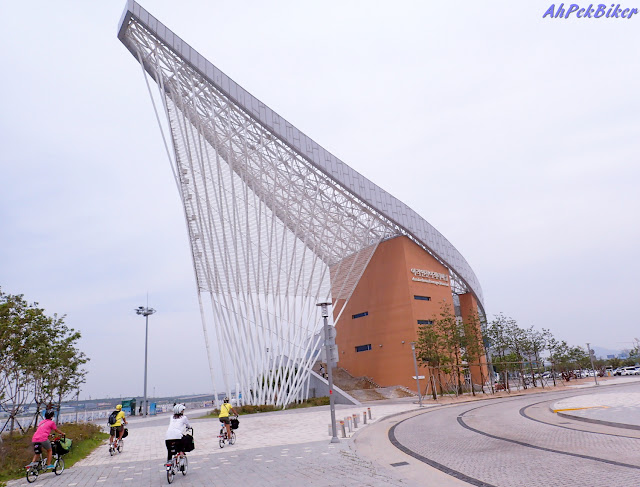 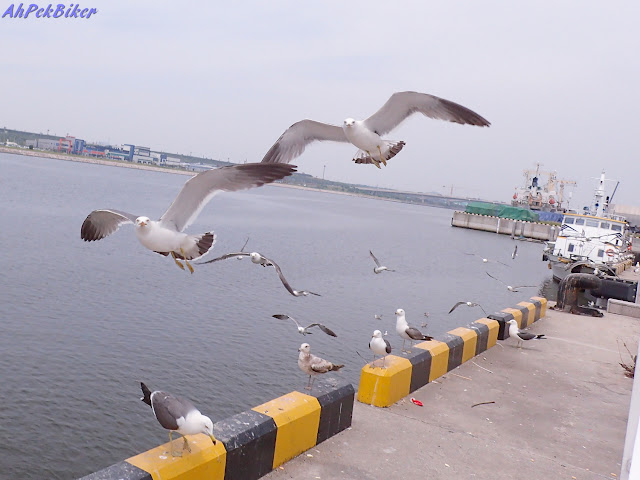 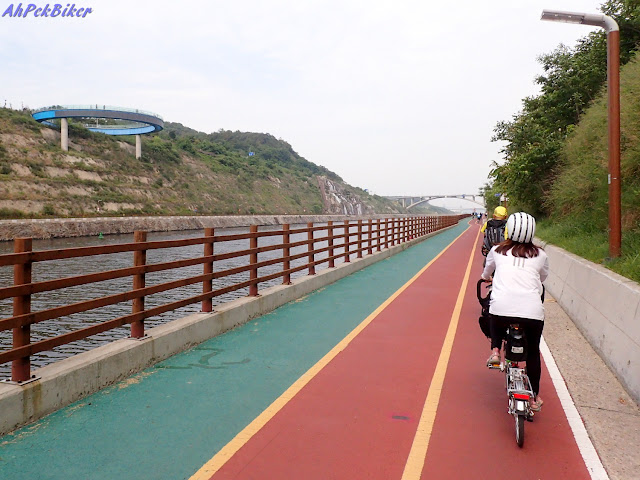 Cycling pass the Ara Maru Glass Observation Deck. We had thought of going over, to peer down through it's glass floors; but this would had meant a 10-20km loop over to the other side of the canal. Let's just be happy to cycle on this side.
Note: the red path is for cyclists and the green one for pedestrian. 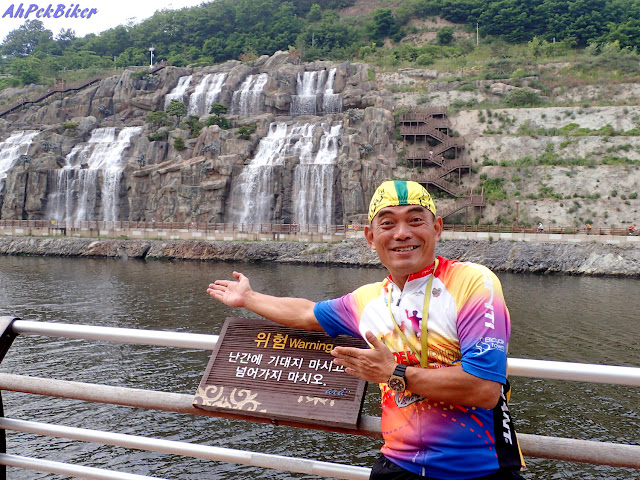 Next to the Ara Maru, an artificial waterfall. Just happy to view it from this side too... had to forget about hearing the roar of the water from nearby below. 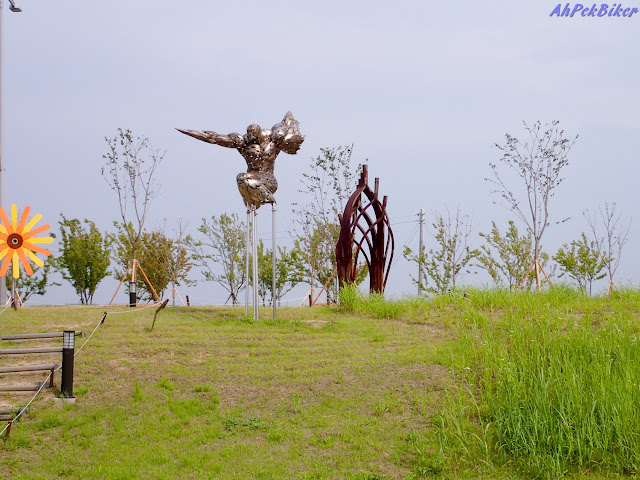 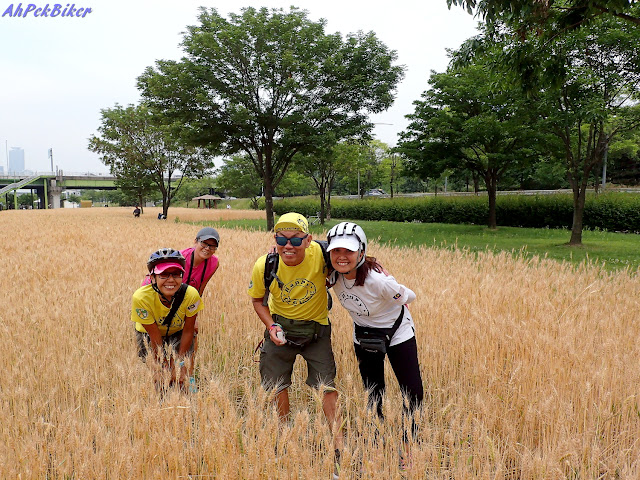 A small wheat field made a picturesque spot for brown against green. 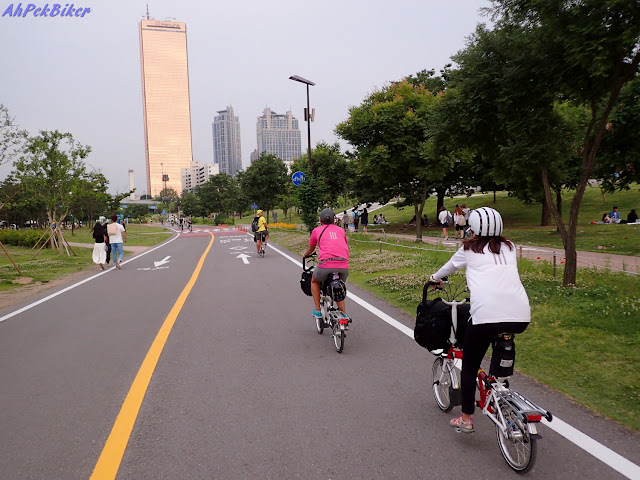 As we got nearer to Seoul, towering skyscrapers could be seen. One shone brightly golden in the setting evening sun. 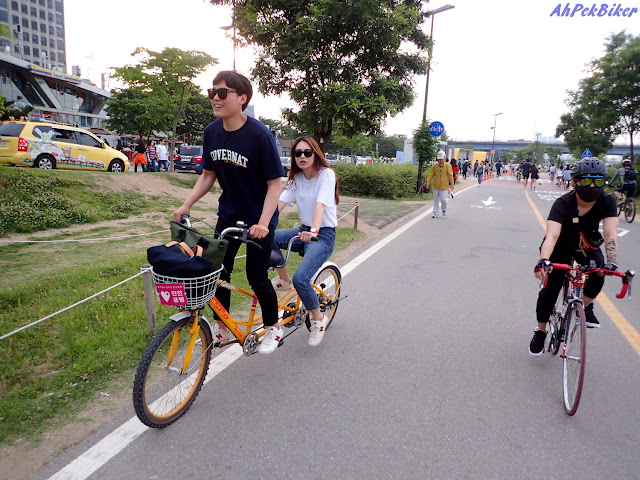 Nearer the city, the path got very busy with many cycling, many joggers, stroller and even people on skates, roller blades, etc. 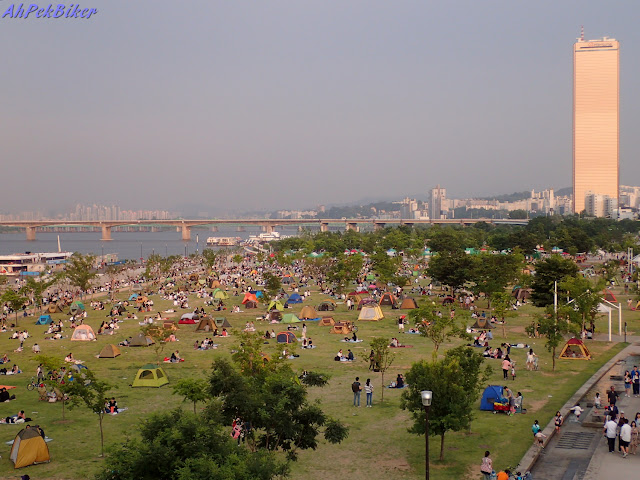 Multitudes of tents at the Duri Eco Park; it was a summer weekend and the crowds were out!

The route has ample facilities for cyclists: 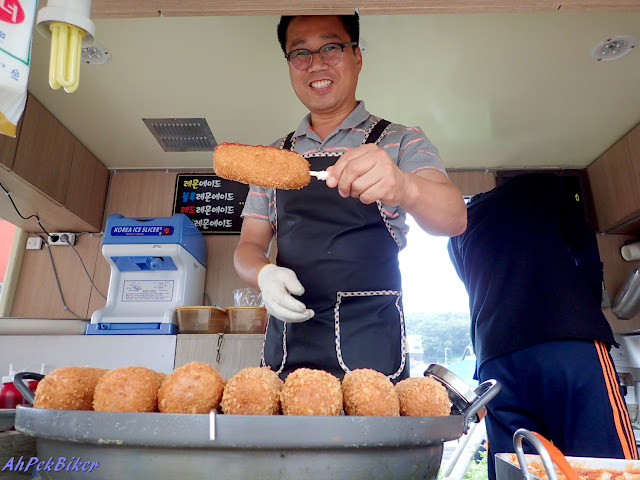 Food stall dot the route at the both the small and large parks. My favourite - these breaded sausage on a stick. This vendor also sells deep fried bugs... ughs! 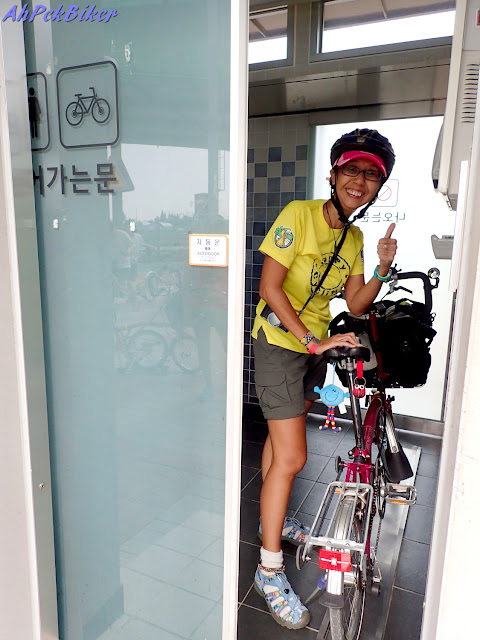 Some of the toilets along the way are fairly large. Whole bicycles can be pushed in and there is a groovy slot for washing of the bicycle before taking it onto a train.
Note: Korean trains allow clean bicycles (including full-sized ones) to be board the first and last coaches during weekends and public holiday. 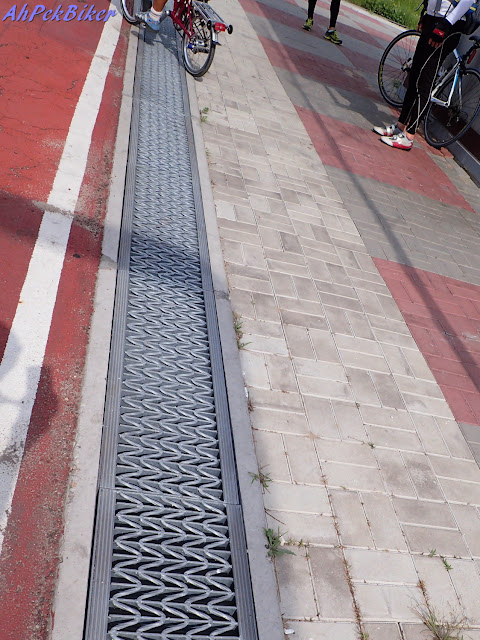 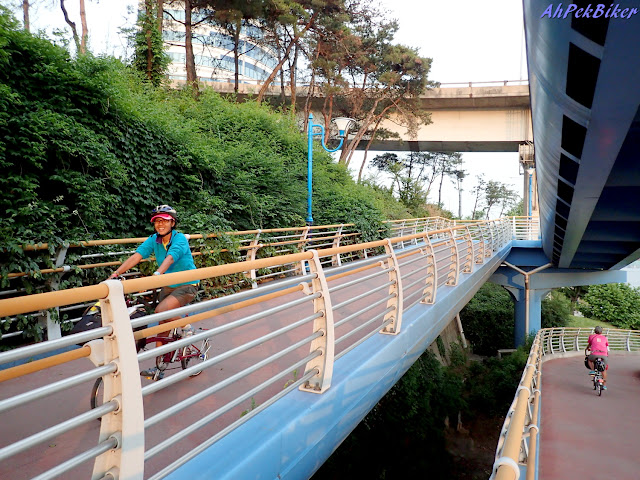 The Ara Waterway meets the Han River at the north-east end. To cross over to the other side, we used the Mapo Bridge which had a double-curved ramps to get to the top. Crossing the bridge... and Presto! we were in the city centre of Seoul. 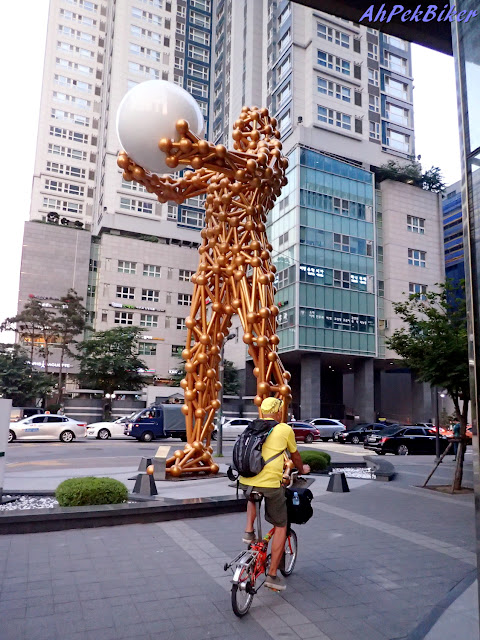 Trust our lucky stars to have this golden, giant molecule man to meet us as we entered the city. 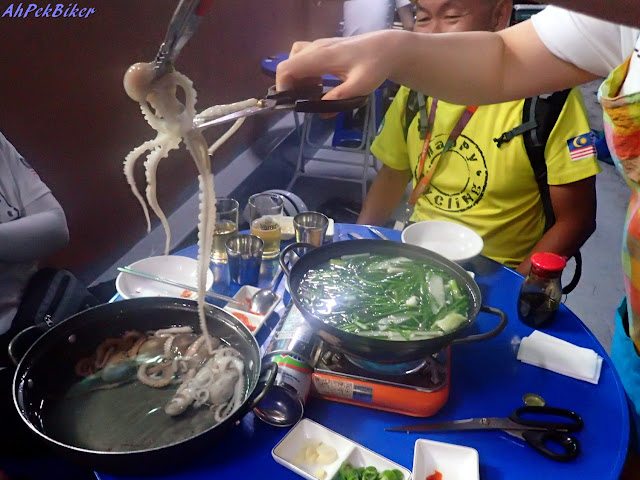 Then our GPS went a bit cuckoo and took us on a loop that took us onto steep roads (steep meaning come-down-and-push-the-bike steep). This worked up our appetite and we went a food hunting... at a place that sells seafood and specialised in life octopus (Sannakji). We did not take the wriggly raw one but the boiled ones. Still these came life and were immediately put in to a wok of boiling water... oh my.... that sure made us lose our appetites and after which we did feel very guilty... NEVER AGAIN! 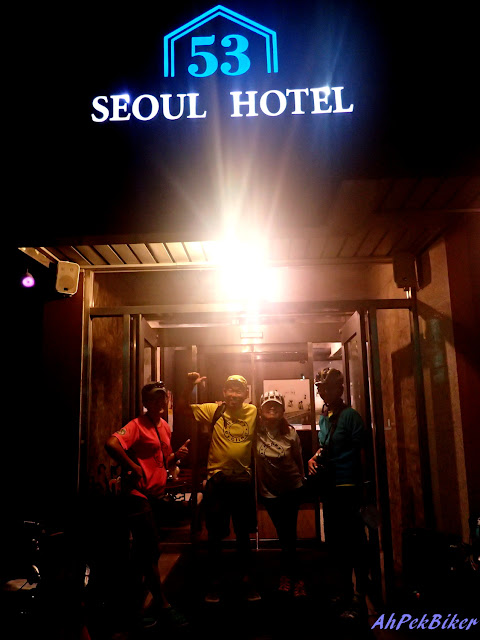 10:00pm - We reached our hotel, the Seoul Seoul 53 Hotel Insadung.
It had been a long day, a long but rewarding day of a beautiful enjoyable ride; a good introduction to Korea and we slept soundly dreaming of the next day's ride.

A superb video by Sin of our first day's ride along the Ara Waterway with great music! 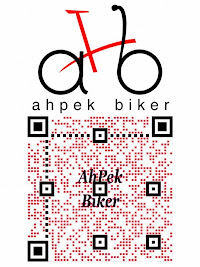