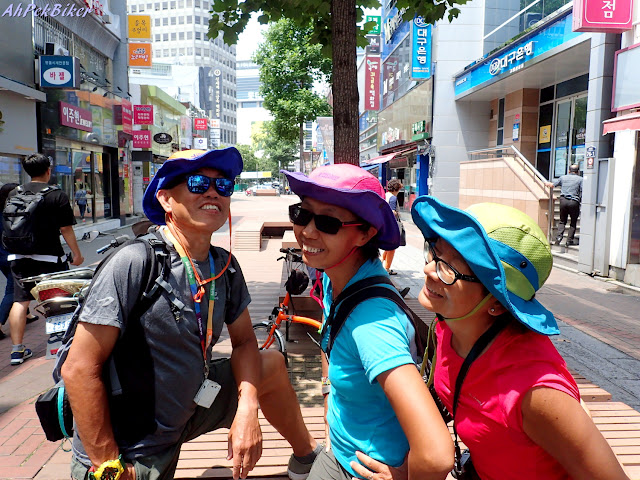 Route Recommendations :
1. Right is Right!
- Korea traffic is left-hand drive. For those coming from right-hand drive countries always do remember to ride on the right-hand side... i.e. Right is right! Same thing applies when crossing the rode, take note that traffic is approaching from left! Sounds confusing, it actually isn't, just take while to get use to it.
- Do be careful at un-signalised zebra-crossing, drivers often do not stop for pedestrians to cross.
- Watch out for the delivery motor-bikes. These are huge bikes that go onto pavements and across zebra crossings too. They ride without consideration of pedestrians and cyclists.

2. Ride Conditions
- The cycling route was fairly flat except for the first stretch from the motel to the Pyeonghwa Chicken Alley where there were some steep slopes.
- The weather was cool at 24°C to 27°C day time and dipping down to about 21°C in the evening. 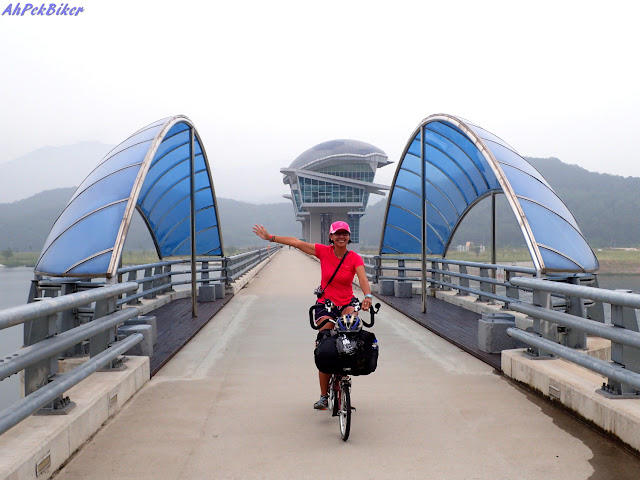 The previous day, we ended our adventures on the Korean cycling trails with a last leg from from Nakdong to Daegu. We did skip the last part by taking a train from Waegwan to Daegu though, by doing that we had also skipped spending the night in Waegwan but gain a full day for exploring Daegu today! So how interesting was the city (it being the third largest in South Korea), let's see to start with there was a Chicken Alley (er... don't get the wrong idea here..."smirks") and then more...

Our full day discovery of Daegu will take us to some foodie places, a couple of street market, a culture street and even a herb market! 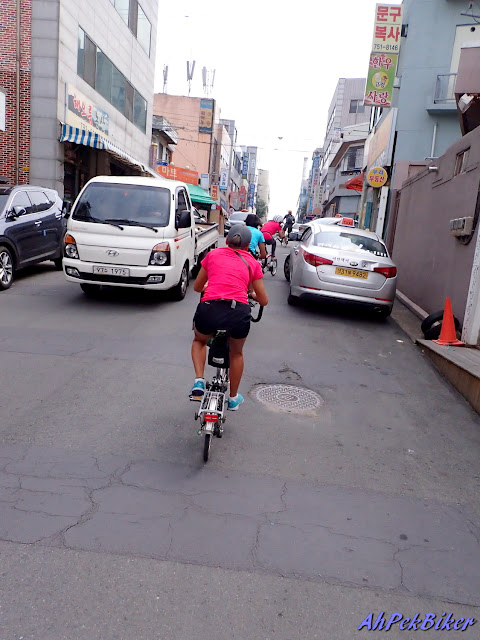 9:30am - We kicked off the day with a ride to find chickens, fried chicken that is. This is at the Daegu's renown Chicken Alley at Pyeonghwa, which according to the map was just across from our motel, on the other side of the Dongdaegu railway station. The station is a large one, and yes there is a road fly-over that goes over the station, but that is a busy main road which we would rather avoid. So we went on a longer loop that avoided the station using less busy roads, but it was one that took us on some sweaty steep climbs that really worked up our appetites. 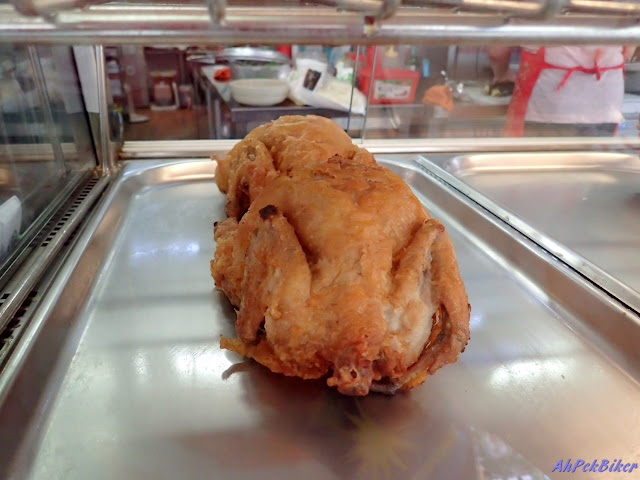 We took our time as it was still early and by 11:00am we were at Chicken Alley
.... and then disappointment!
Most of the famed chicken shops were only opened for dinner. For want of better choices (plus we were Bae-go-peu-da, that's means hungry in Korean) we ended up at the 2-3-5 shop there. Look at this chicken, doesn't look that appetising; but beggars can't be choosers so we ordered one just to try. It was okay but not that fantastic and sure did not live up to it's name; and wasn't really worth the sweaty climb there. Well can't blame the chicken, just got to blame ourselves for getting the time wrong. 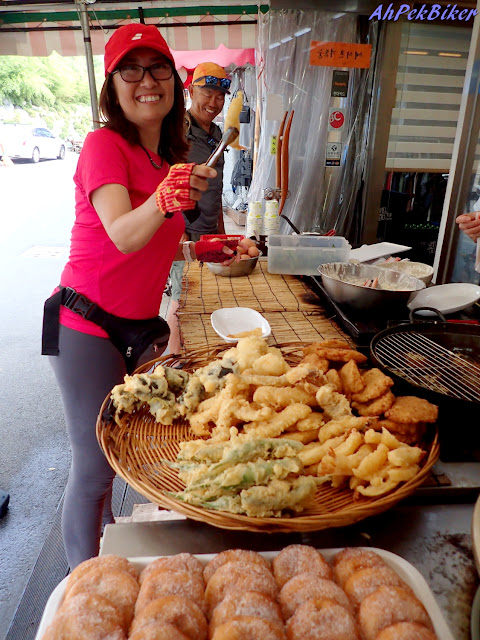 Fortunately there were other choices of food, like deep fried snacks called twigim (튀김) which was something like tempura. 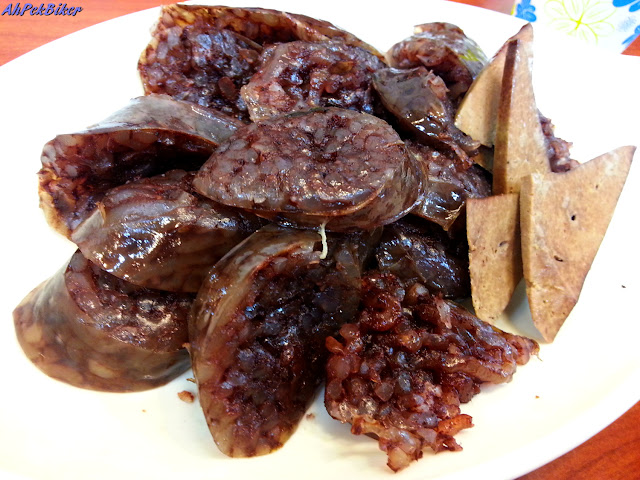 And they have the famed blood sausages called Sundae (순대 - and pronounced Soondae). It's made from a mixture of pig's blood with glass noodles or barley. Looks like an interesting dish and out of curiosity I ordered a plate which also came with some pig's liver. It had a bitey texture... and the taste.. well for me it tasted yuckish, and needless to say I could not finish them. 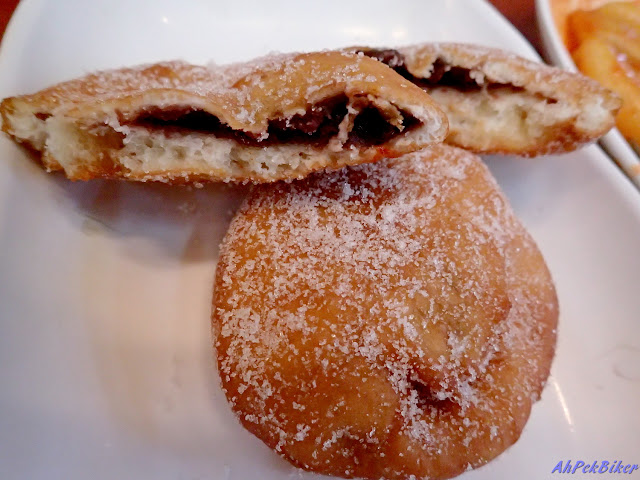 Luckily, this fried buns which were like Chinese Ham Chim Peng came to the rescue to fill up our tummies. We also had steam minced pork pau dumplings which were pretty good. 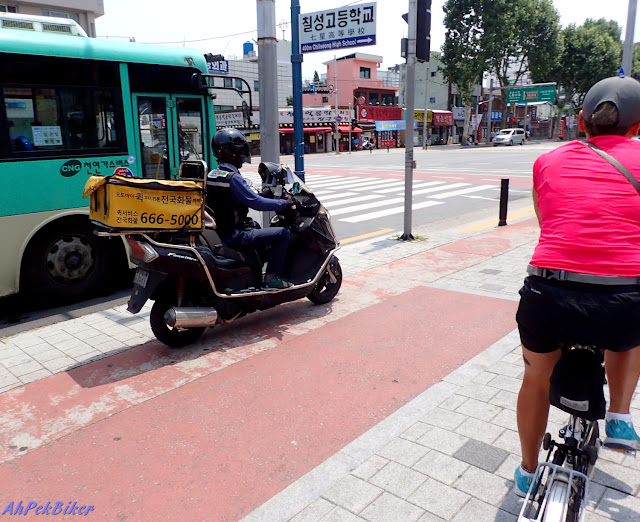 As we headed for our next destination, these huge motorcycles came zooming by on the pavement we rode on. These are courier riders and they ride quite recklessly on the pavement and across zebra crossings without much regard to pedestrians or cyclists; so do watch out  or listen out for them. 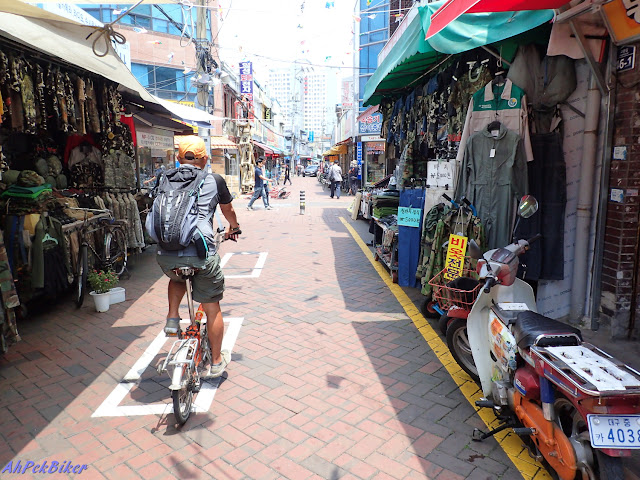 1:00pm - Exploring the Donga Shopping Area. For those looking for bargains, this is the place to be! It has many shops in different sections, each trading in specific items like clothing, hardware, bags, cooked food, dry foodstuffs - the whole works. It is quite a large area covering several streets and narrow alleys; fortunately we were on our bikes and could cover much, even the narrowest of alleys. 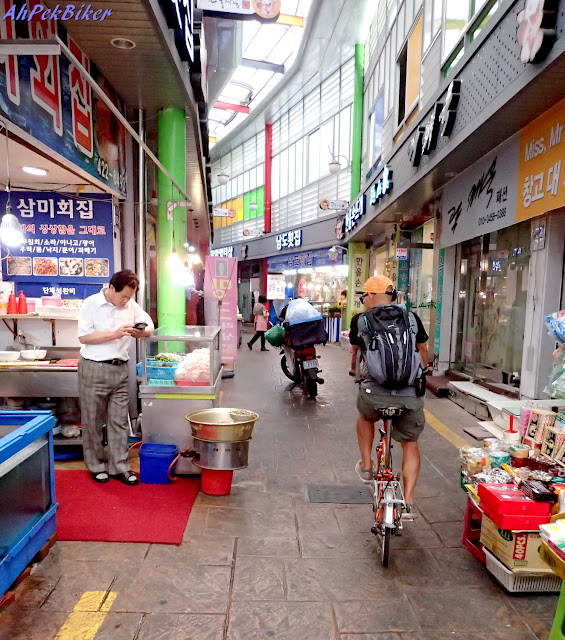 There is even some sections that are roofed. 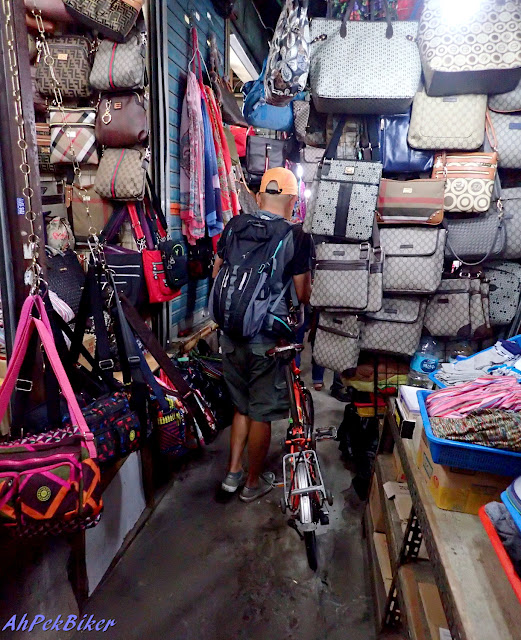 The narrow side lanes got so narrow that it was difficult to ride through, we just had to get got and pushed. 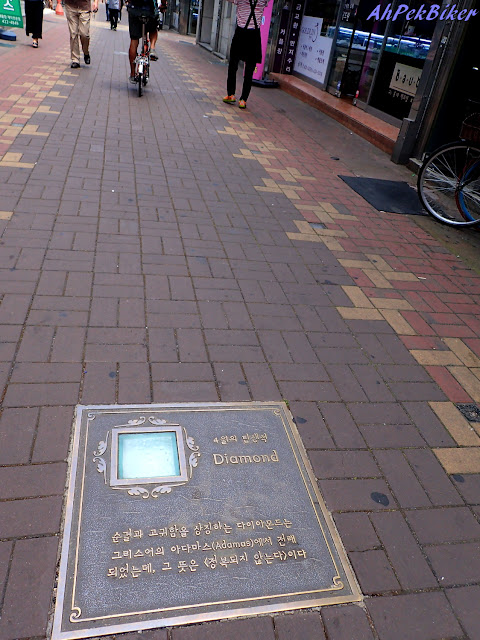 There is even one section that deals in precious metals and gems; but the road here were not a golden yellow brick road, although on the laid intermittently into the paved roads were were plaques each displaying different types of precious stones like emeralds, rubies and diamonds. At a corner of these plaques was a glass casing containing the respective gem. Cant' believe it, but did I just ride over some diamonds? 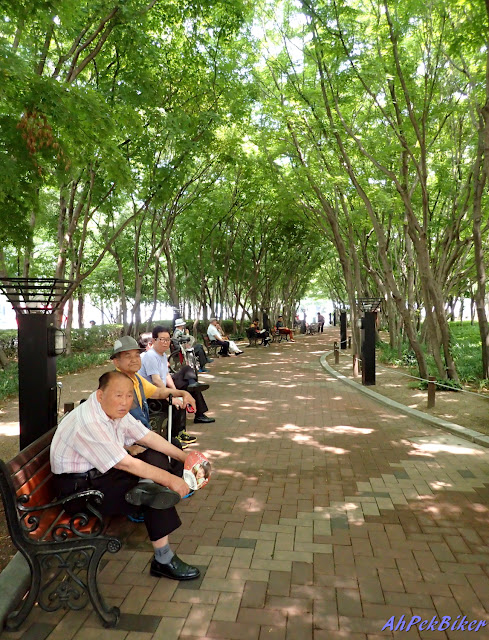 Over at the Gukchaebosang Memorial Park (formerly Dongin Park), old retirees were resting in a nice shady boulevard... 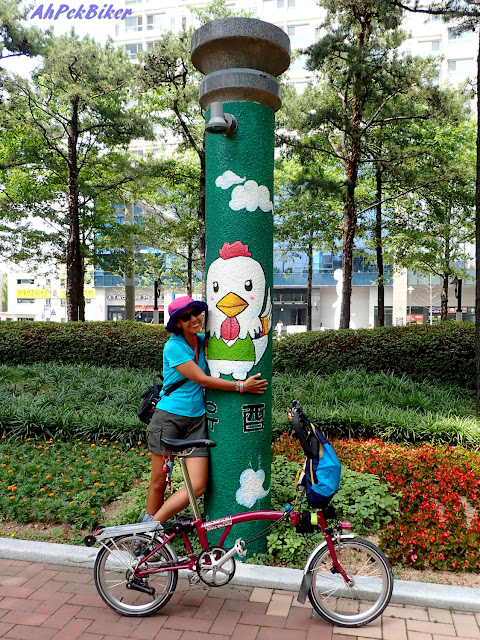 ... while at another section Anne was hugging a chicken her Chinese astrological sign; this section was the Astrology Garden. 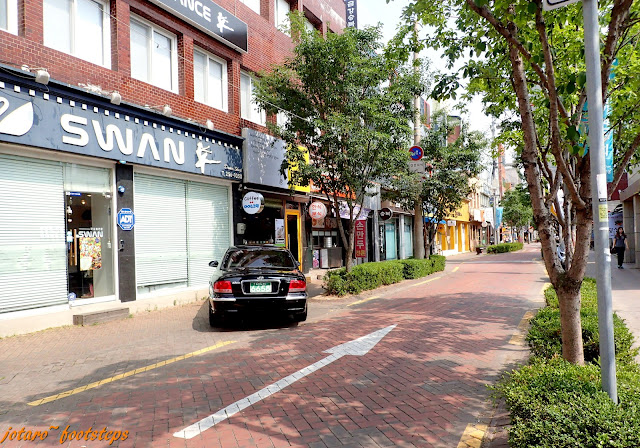 Knowing my love for art, Sin was most considerate to include the Bongsan Culture Street into today's itinerary. This is the place where the local art community come to meet, there are art supply shops here, art galleries, chic artsy cafes and even dance studios.


I went into a couple of galleries where the owners graciously allowed me to take photos of the artwork on display: 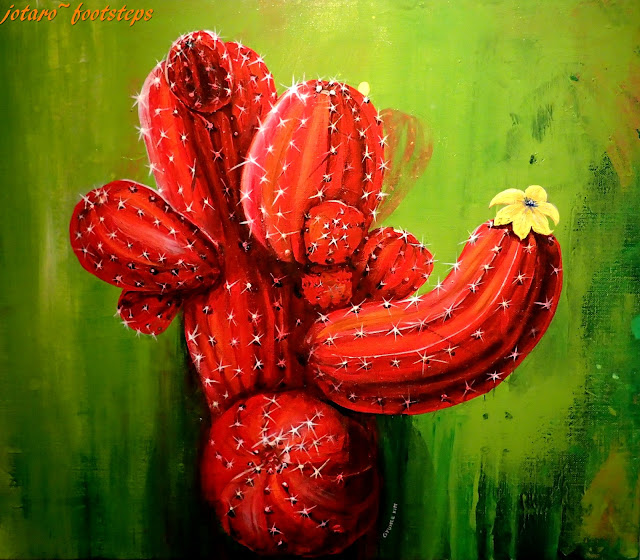 ... while another displayed traditional artwork. 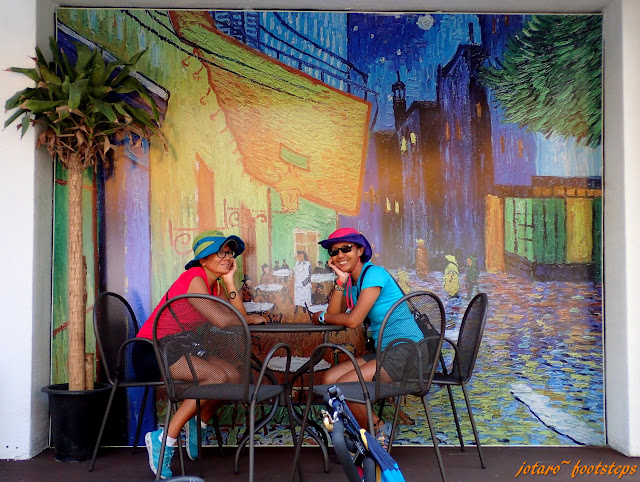 Along the walls of the building were street art murals, here's Fenn & Anne sitting on a interactive mural of Van Gogh's "Cafe Terrace At Night". 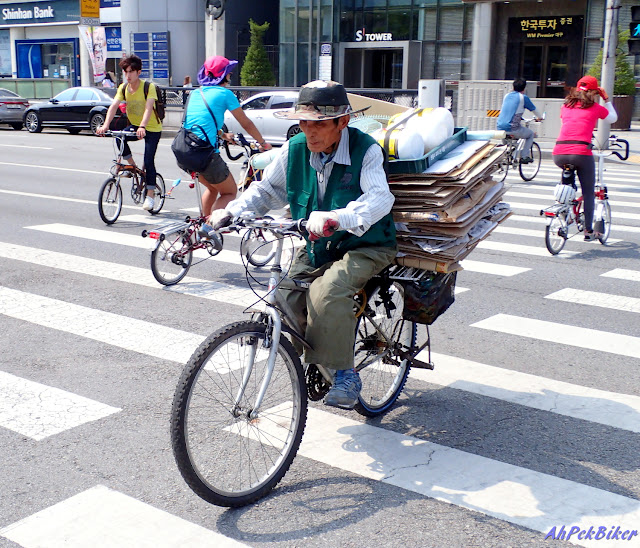 As we cycled along the streets of South Korea, we noticed that although the country has a high population of cyclists, most were sports cyclist cycling to keep fit. There were not that many cycling commuters, and those who did cycle to work were mostly the elderly like this old man. 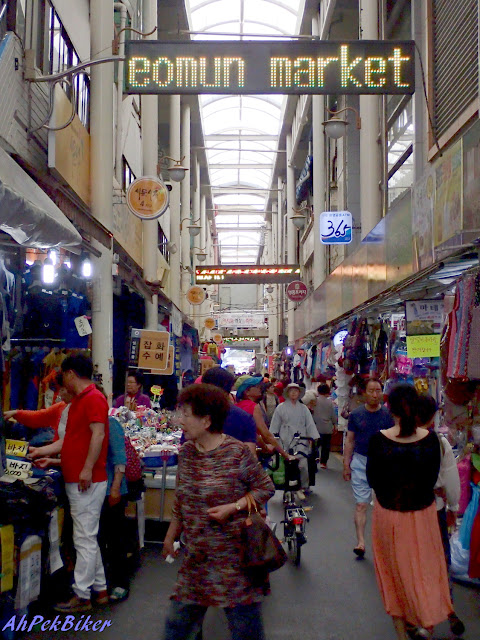 We are back at the Seomun Market, the day time scene here was much different from the mocked up night market. Unlike the night market which looked rather mocked up; this is the real deal, a real living market, with the area having myriads of shops selling all sort of goods. 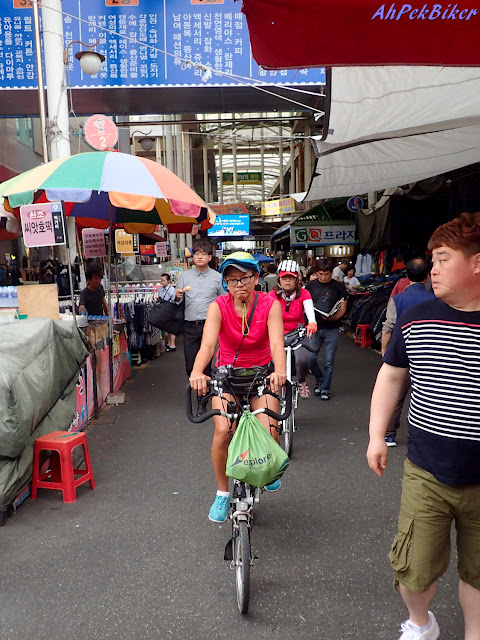 And it is a large precinct covering several long streets with many branch side streets. It was possible to cycle along these streets, but at busy crowded sections it was better to come down and push. 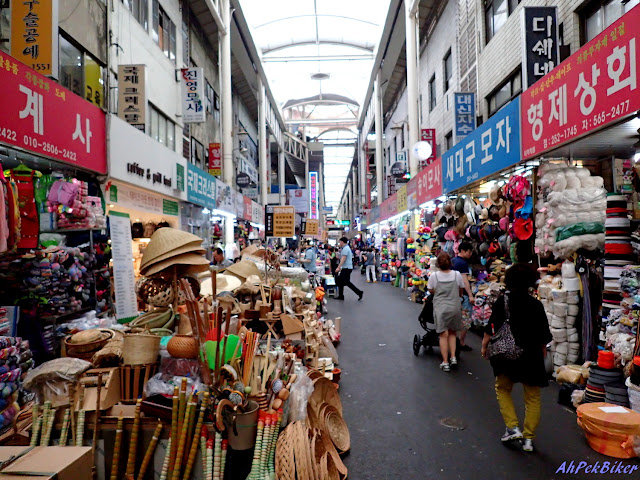 Another view of the market showing the different wares on sale. 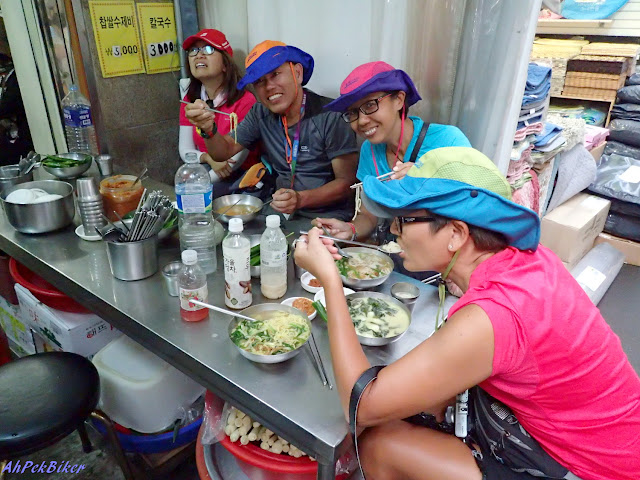 At one corner of the market - it's Makan Time Again! This time it was cold and hot noodles with some kimchi. Notice the colourful hats, somewhere along the way my buddies got them. They are very suitable for cycle touring, the brims folds up and button to the sides. And they did make my buddies look cute and adventurous too. 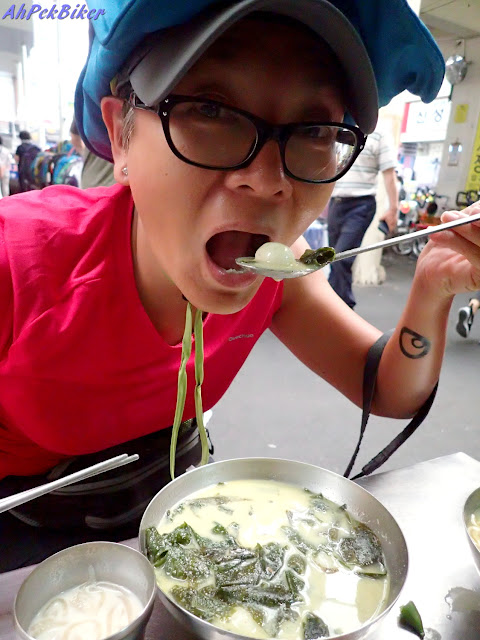 Fenn enjoying rice dumplings, something that's similar with Chinese tang yuan (汤圆) but here it's served as a staple in hot soup and not as a dessert. 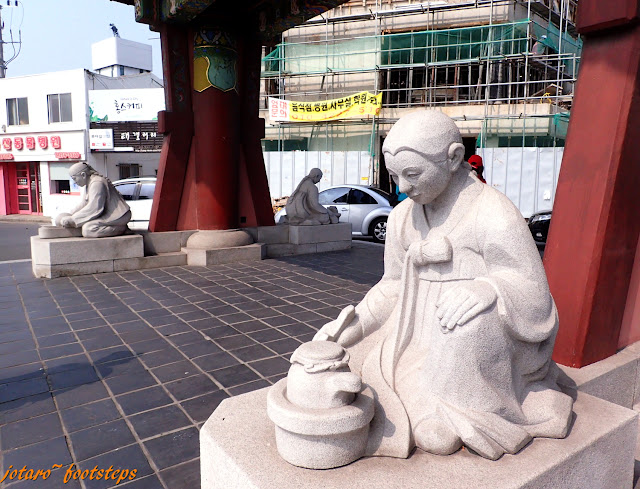 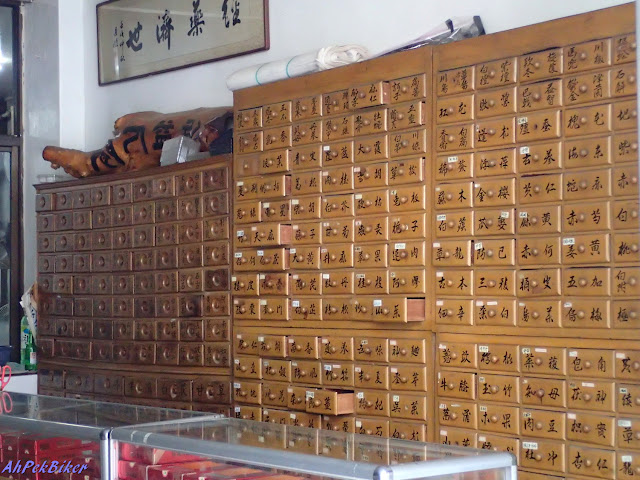 This herb market is located on Gyo-dong 4-gil. Along the street were shops with these cute wall cabinets with small drawers containing herbs and other traditional oriental medicine. 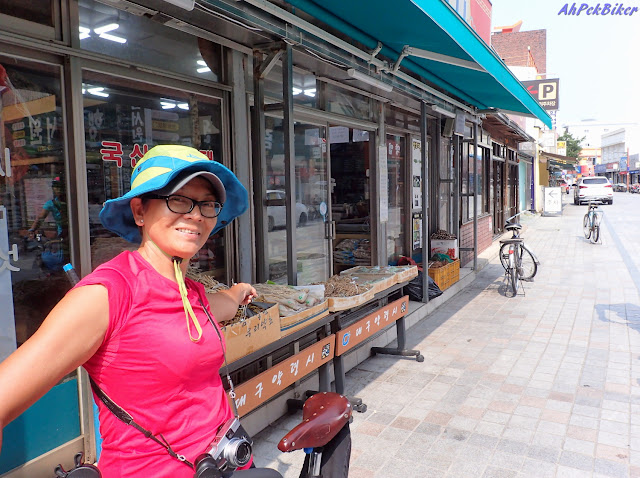 Other shops had trays of herbs left on open displays at the road side. 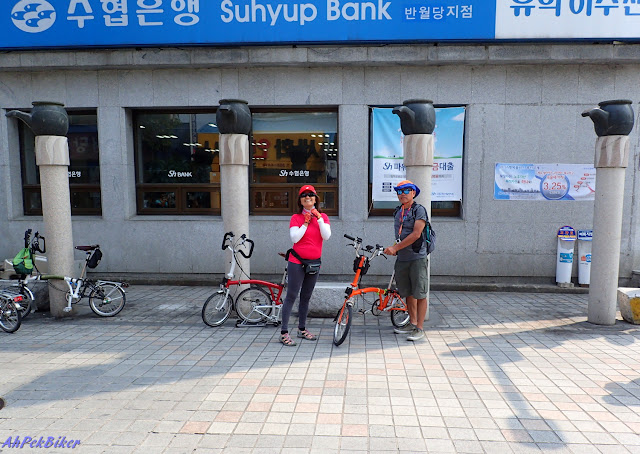 And some street art along the road with traditional clay herb brewing pots standing on tall columns. 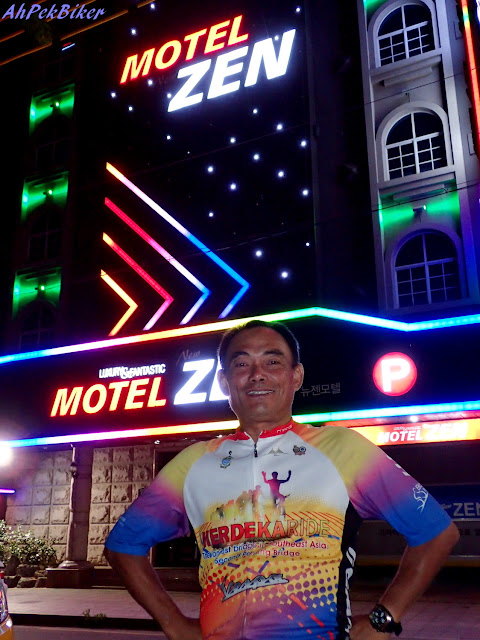 Yup, that's me Jotaro Zen aka the AhPek Biker standing in front of my hotel, the Zen Motel; it's glitzy neon facade making it look more like a night club. You believe it's mine?... haha perhaps in my dreams! 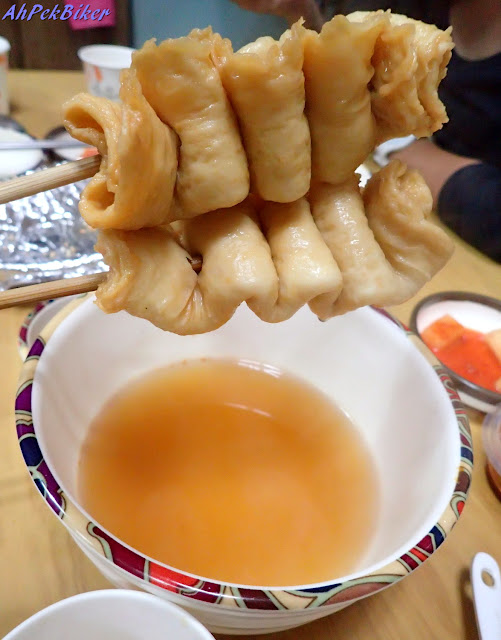 Dinner was at the Sunshine Toast Restaurant around the corner from the motel. Part of our meal was this Odeng fish cake (오뎅) which I liked very much, especially the soup with it's fishy flavour. The odeng is a street food and are usually sold at the front of shops slowly boiling in their soup; customer can just stand there and freely serve themselves (freely but not free of charge!).  I went a few rounds of the soup which had a strong fishy flavour, it's warmness just right for a cool night. 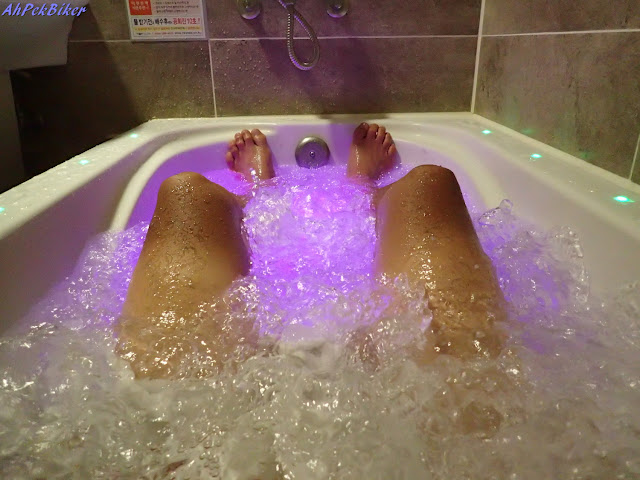 Back at the Zen motel, it was a soothing bath at the en-suite Jacuzzi long bath. With it slowly changing lights and strong jets it soothed my tired muscles while clearing my mind, a truly zen experience. It was so relaxing I almost fell asleep.
(Pssst.... now, now, don't be naughty and try to peer into the water to look for the treasures between my legs, I had a towel tied around myself sumo-style... heh heh!)


A video by Sin of Day 10 of our South Korea tour, riding around and exploring Daegu.