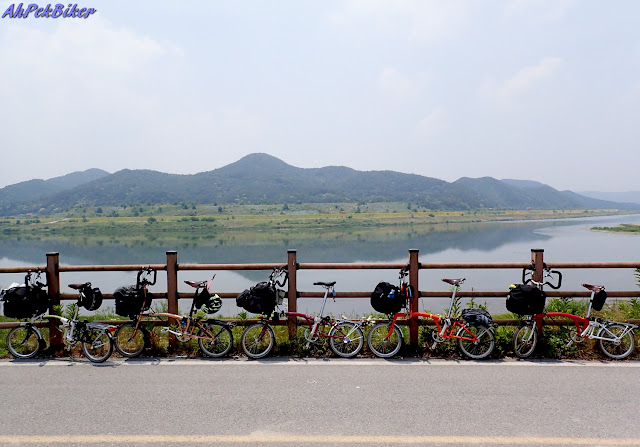 Route Recommendations :
1. Right is Right!
Korea traffic is left-hand drive. For those coming from right-hand drive countries always do remember to ride on the right-hand side... i.e. Right is right! Same thing applies when crossing the rode, take note that traffic is approaching from left! Sounds confusing, it actually isn't, just take while to get use to it.
Do be careful at un-signalised zebra-crossing, drivers often do not stop for pedestrians to cross.

2. Ride Conditions
Most stretches along the river trail were not shaded, so do cover up or apply sun block. The route was fairly flat except for several steep stretches that veered of the river trail to avoid cliffs. Also, around Binaesum are several hills. Some of the slopes were as steep as 10 gradient; on the cycling route map below, click on the top left square, scroll down to the bottom and select satellite view to see where these slopes are.
At Gangchun Island, there is a stretch with deep soft sand, best to push there.
The weather was cool at 24°C to 27°C day time and dipping down to about 21°C in the evening. 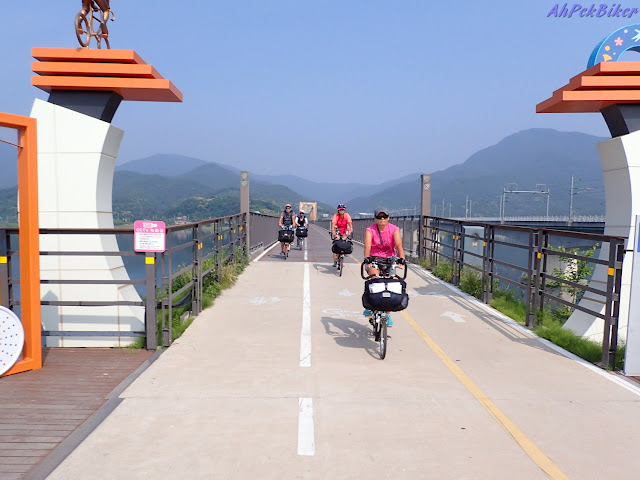 The previous day we did a bit of riding round in circles, trying to locate the continuation point of the Namhangang River Cycling Trail at Yangsu. Fortunately a Mr. Park saw our dilema an guided us to the right continuation point and we rode on happily to Yeoju. The route had been a nice one hugging Han River part of Korea's Four River Cycling Trails, with some sections veering away from the river to avoid steep cliffs. Skirting those cliffs did not meant no climbs, in fact these are the areas with some steep climbs.
Today's ride will take us through the beautiful Seom valley and also mark the end of our South Han River cycling experience when we end in Chungju.

Cycling Route - Yeoju>Han River Culture Pavilion>Gangcheonbo Dam>Gangchun Island>Seom River Valley>Binaesum>Jojeongji Dam>Chungju.
We continue or ride on the Han River Cycling Trail to head from Yeoju to Chungju. This is one of the more interesting routes we ride on, taking us to a dam with a super steep access/exit, a beautiful island and a very scenic river valley. Nearer to Chungju, there are several steep slopes. 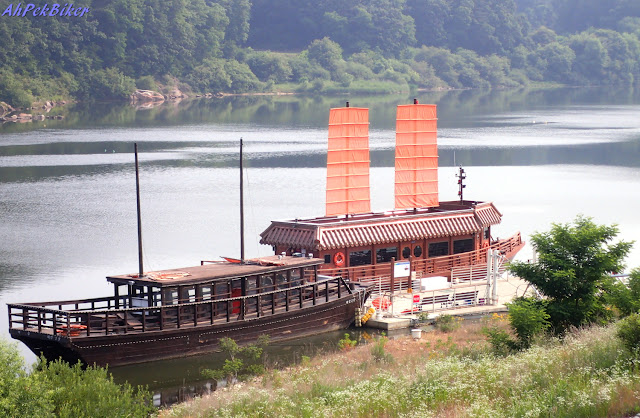 Our day starts easy, no hard-looking for where the Namhangang River Trail continues (unlike the day before). It continues from a lane just opposite our hotel, the Seven Motel of Yeoju. We quickly rode over and head for our first destination, a certification booth. The four kilometre ride there hugged the riverbanks with pretty scenes like this one above. These are Turtle ships Korean junk boats, or at least replicas of them used for river tours. 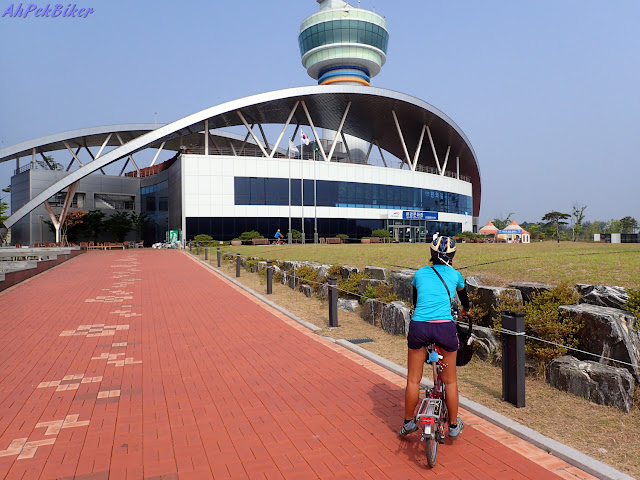 The first certification stamp for the day in the River Tour Passport was stated as the "Gangcheonbo Dam". The red booth was not located at the bridge but at the adjacent Han River Culture Pavilion ((한강문화관), an impressive modern looking building with arched roofs and a viewing watch tower. Stamping can be done at the booth located at one corner of the compound or at the reception counter in the building. We did it in the building, where one can also sign a visitors' book - I did that and left one of my "Ah Pek Biker" stickers too.
This pavilion is a commemorative cultural space where visitors can learn about the background and potential benefits of the Four Major Rivers Restoration Project. Under the theme “Enjoying 5,000 Years of the Arts”, the pavilion sheds light on the history and cultural assets of the Hangang River and provides opportunities to engage in various cultural activities. It would have been great to slowly browse through their presentation, but we have hours of riding ahead, so I reluctantly pulled myself away and rode on... 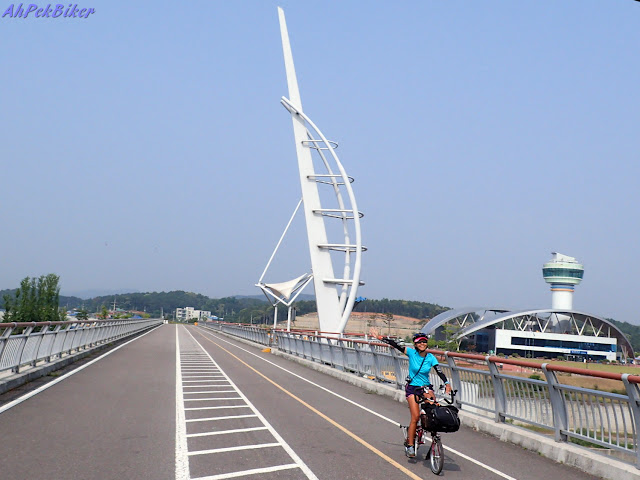 ... across the Gangcheonbo Dam, an easy ride over it's flat top. That is until we reached the other side.... 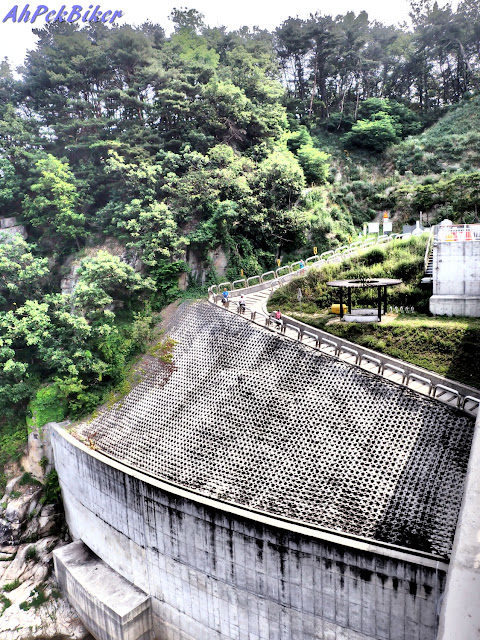 ... where there is a steep ramp (very steep indeed at 27° gradient) down to the dam's base at least a hundred metres below. No riding here, it was safer to come down and push; even that was not easy as we had to apply our brakes all the way down. Fortunately there are raised restricting timber strips across the ramps to help slow us down. 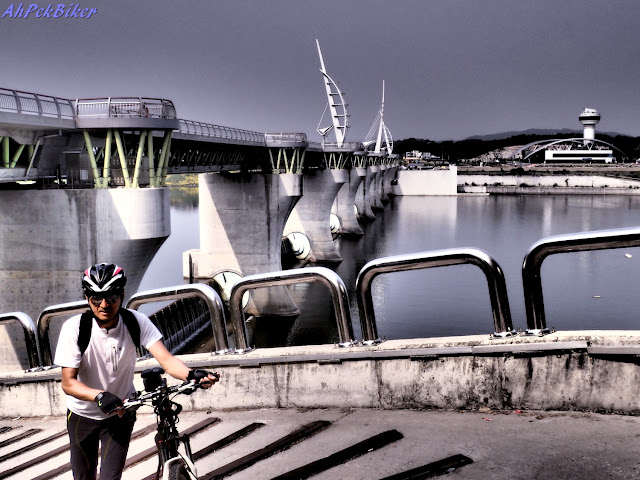 If going down was difficult, coming up would have been even harder; sorry there are no lifts here! 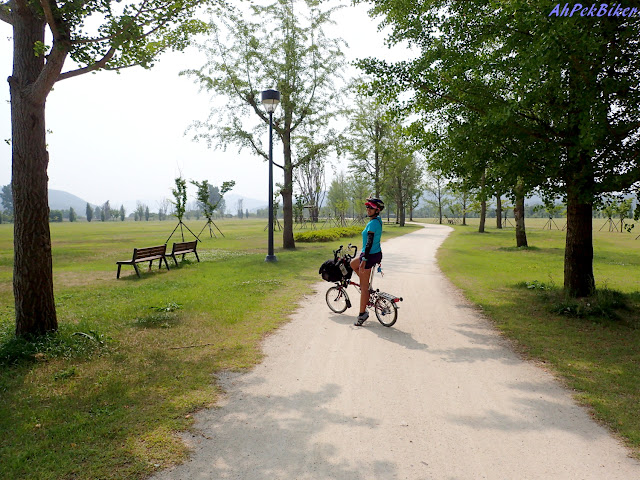 Going down the treacherous ramp was worth it as four kilometres away was Gangchun Island, a nice, well planted place very suitable for recreational activities. 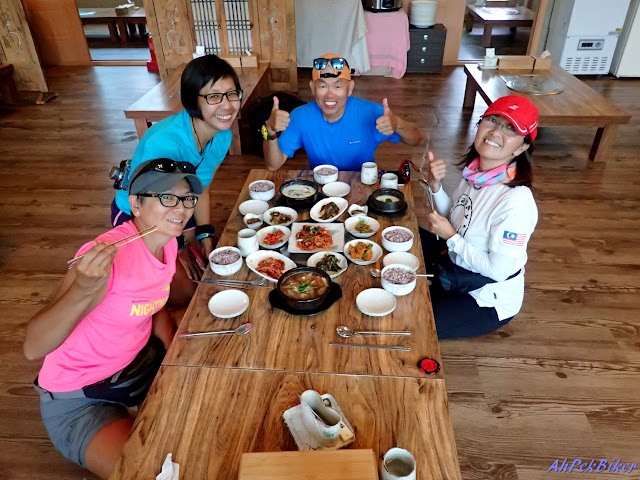 10:45am - Concerned that the further away we are from Seoul, the harder it would be to find eateries; Sin was on the look out. We found one very comfortable place at Seomgang. It was a restaurant that served very good food with a traditional setting of low tables on timber flooring; and was also patronised by locals as it had a proper road access from town.


After Gangchun Island the trail veered inland a fair bit, away from river to avoid steep cliffs, and went onto shared roads. This veering away did not totally avert the hills, in fact there were several stiff climbs. After one of these climbs we took a rest at a covered bus stop, there we met local Jay Young who was taking his friend Roger (who had returned from abroad for a visit) for a ride on the trail. They were most helpful. We mentioned that we were heading for Chungju and the following day would be taking a bus to Jeomchon to continue our journey; and that we were concerned about the regularity of the buses between the two towns. Our earlier checks on the web indicated that there were only two buses per day. Jay quickly checked his phone Naver app and even called up the Chungju Bus Terminal. His queries reassured us - there are buses running every hour between the two towns. Thank you Jay! 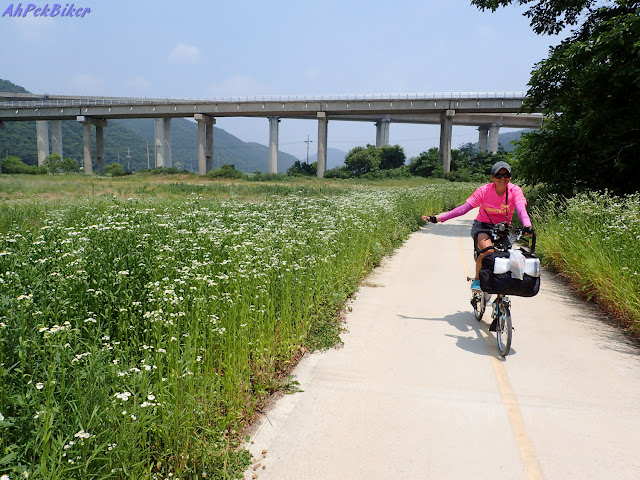 After going through several tough hills, we ended at what would be the most beautiful stretch of our ride along the Han River - the Seom River Valley. As we entered, fields of beautiful flowers lined both sides of the trail greeted us, and went on as far as our eyes could see. 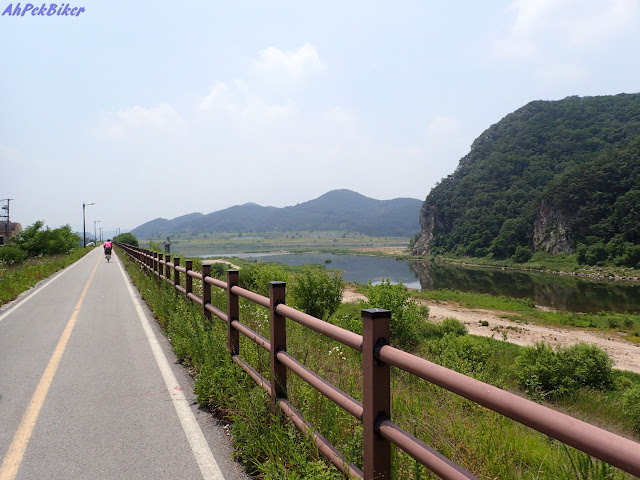 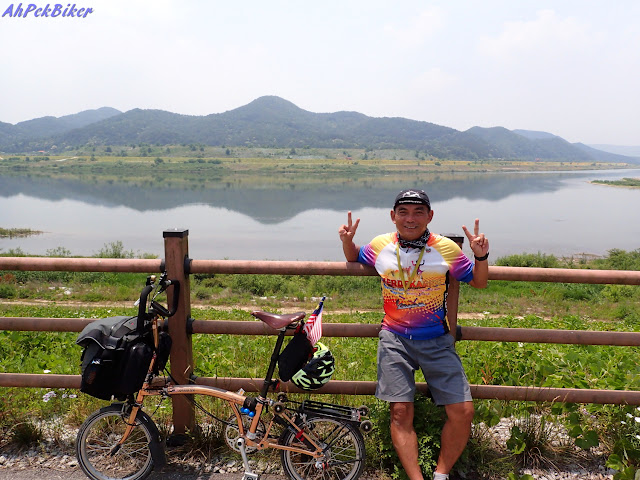 ... the still waters of the river beautifully reflects the hills. 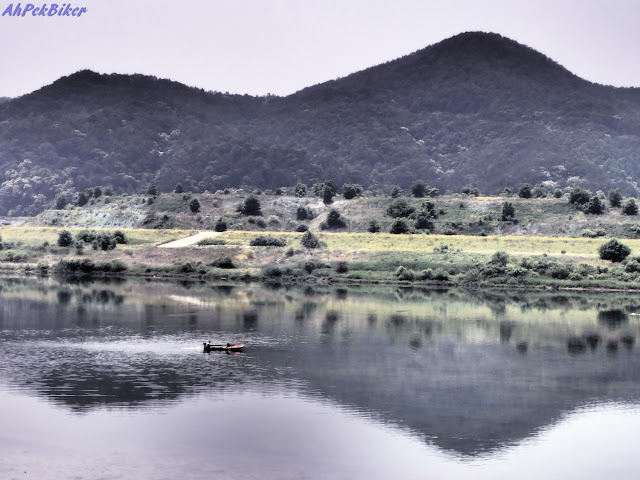 Down at the river, fishing boats dot the scenery... 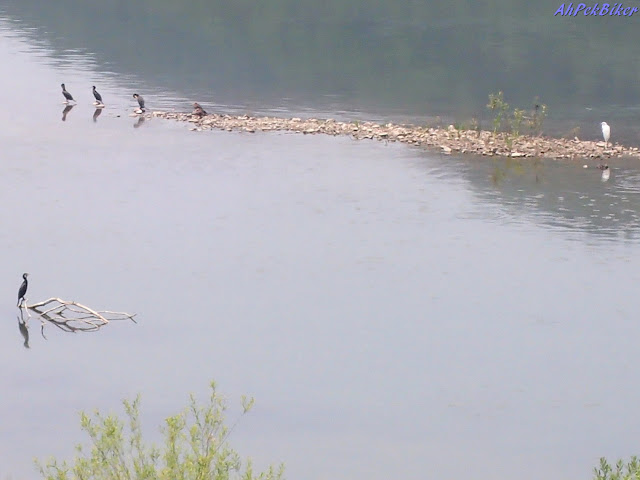 ... and water fowls happily lazed along it's banks. 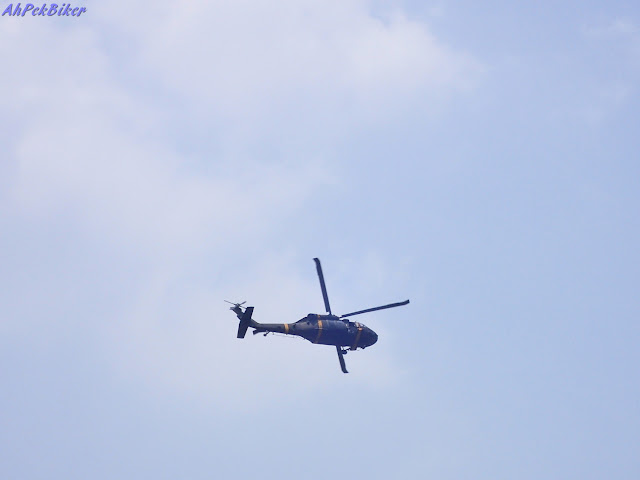 While up above, a birds of a different kind flew by. This helicopter slowly puttering in the sky and every once in a while jet planes went loudly whooshing away, their smoke trails painting white lines in the blue sky. Today, there was some kind of aerial exercise going on. 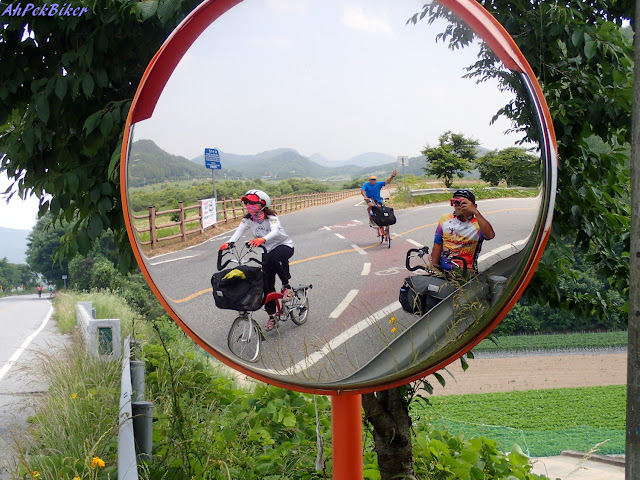 This combo reflection photo shows us leaving the beautiful misty valley and onwards to an area of contrasting scenery. These are shared roads lined with vegetable farms and fruit orchards. 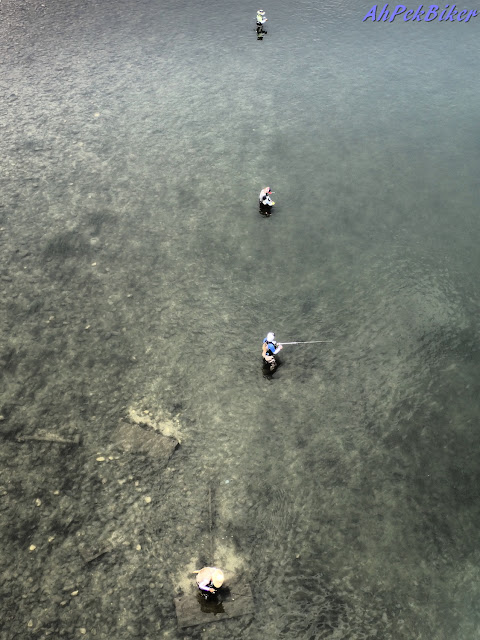 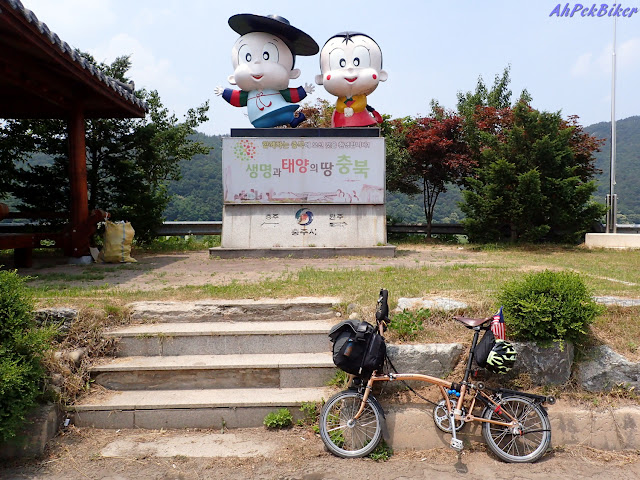 12:45pm - We reach a spot, a small park. The city's mascots, two cute cartoon couple in traditional Korean costumes, stands atop a sign that announced "Welcome to Chungju".
This is the city's extreme boundary, we are still about 25 km. away from the city centre. 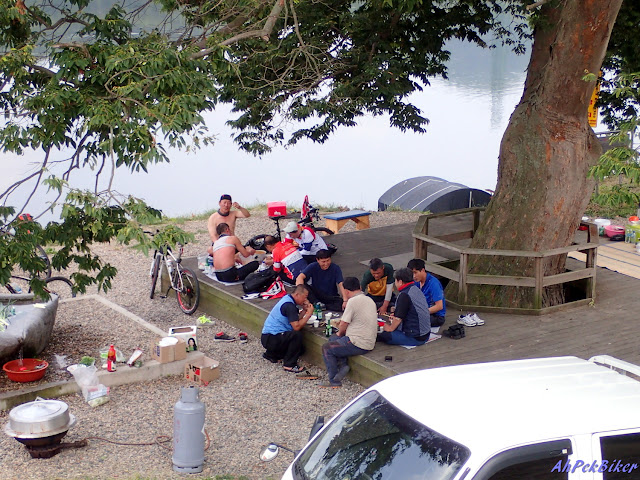 We are still on shared paths and a passed a spot where some local cyclists was sharing a wooden platform spot with another group of workers. It must be a lovely place to have lunch, under a shady tree and next to the scenic river. On of the cyclists hailed me over to joined them; I was tempted but my buddies were already far ahead. I waved a "Thank you" in acknowledgement and rode on to catch up. 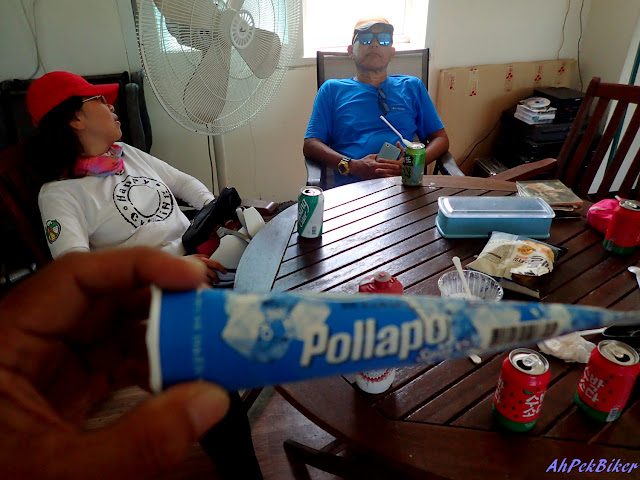 At the Binaesum (Binaeseom) certification centre it was time for some rest and perhaps a short snooze. This centre is not some grand building, but an small restaurant with red front walls. Unlike most other restaurant there is no dispenser here for free water, bottled mineral water has to be purchased. 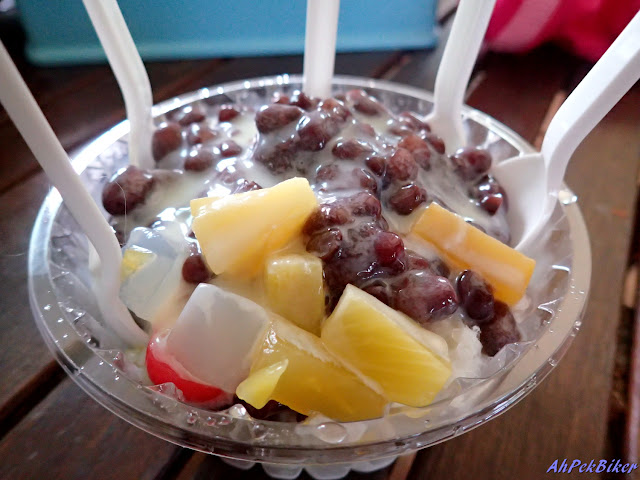 It's Bingsu time!
The food served here is not that great but it was okay as our early brunch was still sustaining us and the five of us shared this iced dessert, just to try it out. 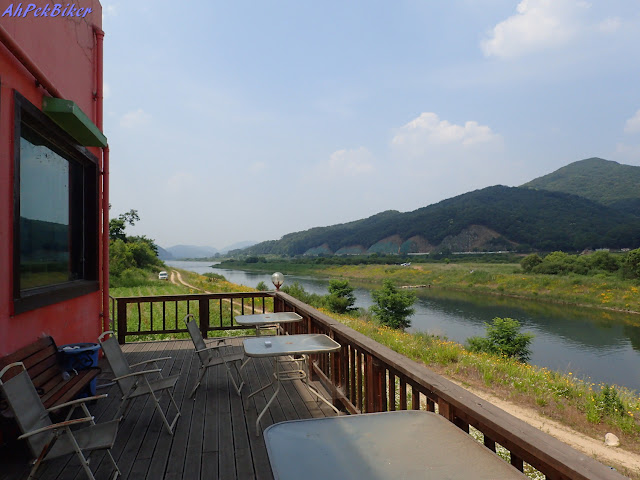 While here, don't forget to pop out to the rear balcony, it has a lovely scenery. 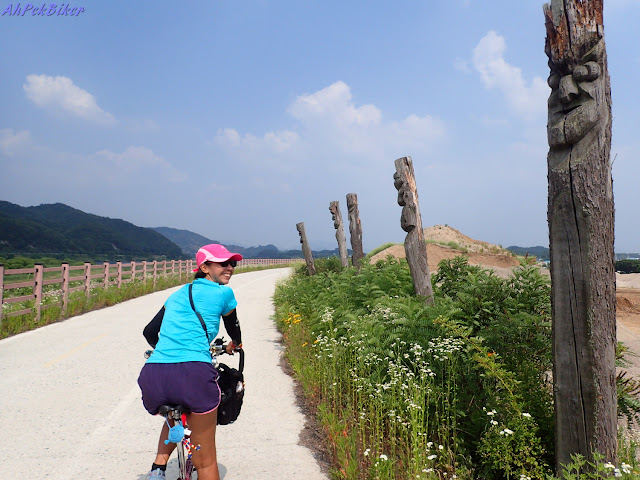 We were back onto dedicated paths, one that's quiet flat and runs through the farm belt of Chungju. Every once in a while small tractors pulling small carts filled with farm goodies would roll by, sharing our lanes with us. 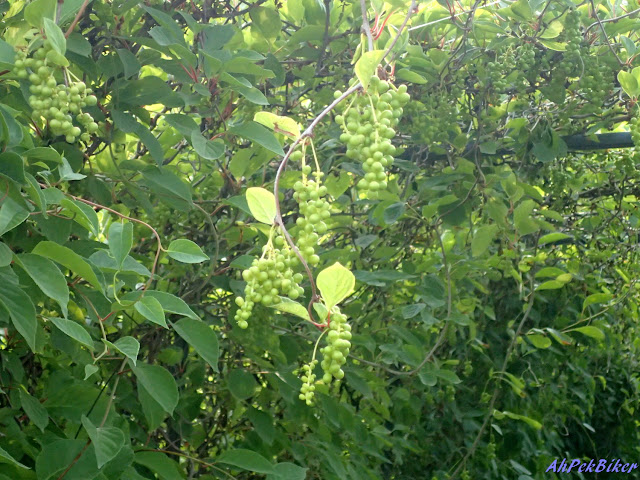 A surprise find - a small vineyard with ripening green grapes. South Korea has a small wine industry with vineyards further south around Yeongdong which produce the Chateau Mani brand. 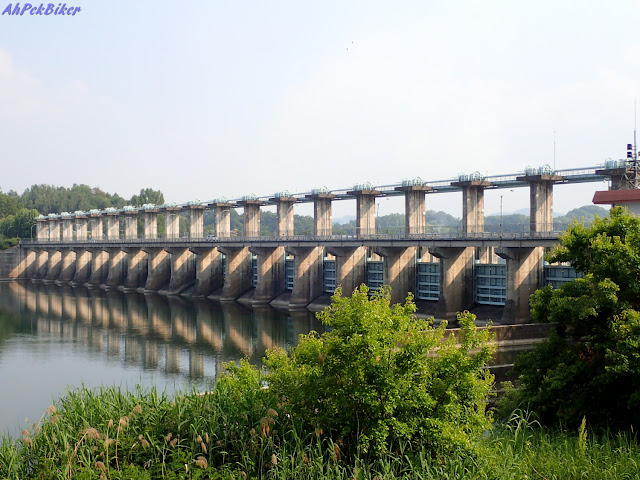 4:35pm - We exit the bike paths onto shared lanes again, this time near the Jojeongji Dam. To head for the next certification centre, the Chungju Dam, one would have to cross this dam to get the bike paths on the other side. It would have meant adding another 15 km or so to our journey; we decided to skip it as we wanted to arrive earlier in Chungju to book our bus tickets for the next day and also to look for a suitable motel. 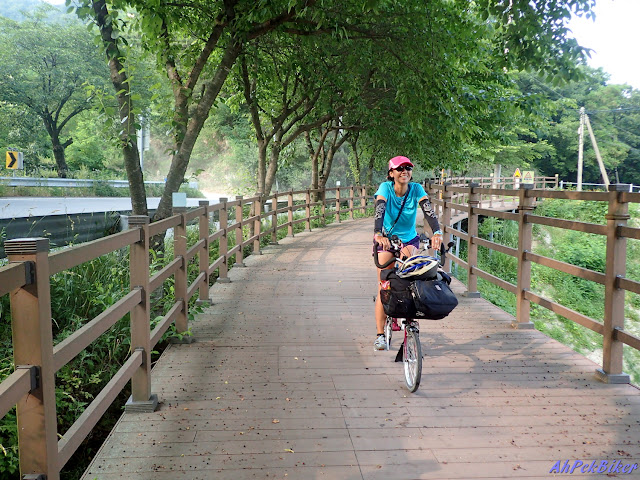 Our detour here did not just save us time, it also took us on a nice route of wide shady boardwalks going a few kilometres up and down gentle undulating slopes. 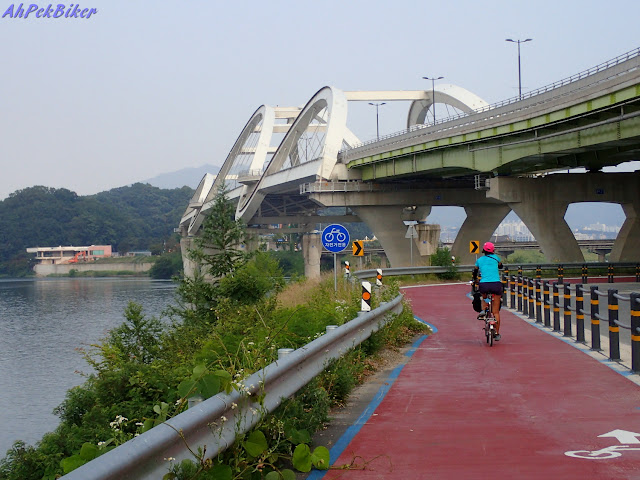 The final crossing over to Chungju city centre was an area of combo bridges of varying designs; this one above with arches that rolled like an rhythmic gymnast flowing ribbons. We crossed on of these bridges. 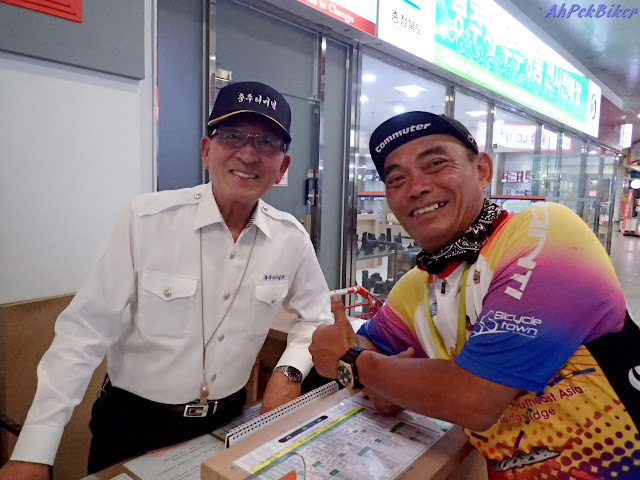 5:45pm - At the Chungju Bus Terminal we were fortunate to meet Mr. Kim at the information counter. He speaks good English which was helpful as the bus timetables were in Korean. He pointed out the correct schedules for us (see the timetables on the counter top); the bus to Jeomchon leave every hour (even more often during peak periods); so there was no worries for us. Unfortunately, tickets can only be purchased on the date of travel; so we will have to get our tickets the following morning when we head for Jeomchon. 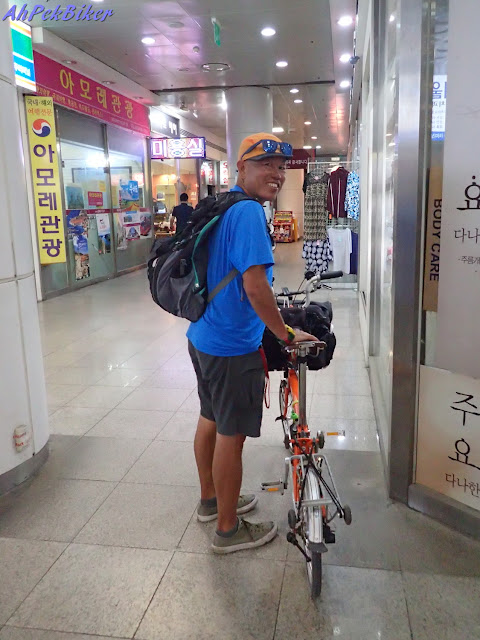 The bus terminal is conveniently located at one end of a shopping complex, and we are allowed to push our bikes around without having to fold them! We just rolled our bikes over to a Young Woo Dong outlet, parked our bike and had a lovely dinner of rice, noodles and soup.  Their beef soup (that comes with a bowl of rice) is very good and should not be missed. 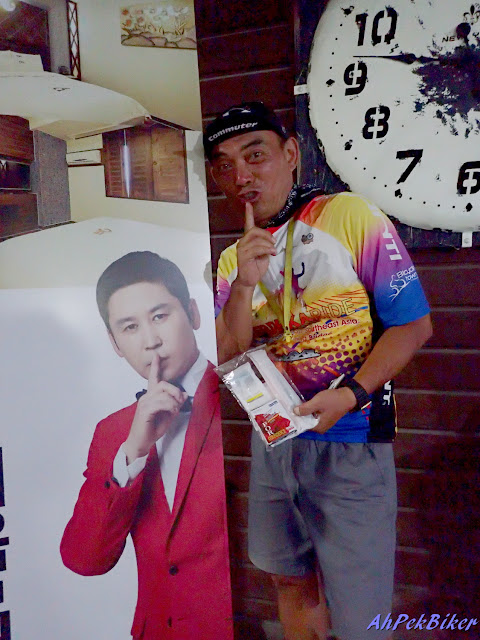 Our stay for the night was at the nearby Ora Motel. Korean motels value the privacy of their patrons, a poster at the hotel's reception showed a smartly dressed concierge shushing with a finger to his lips. Looks a bit secretive, doesn't it? "You don't tell and I won't tell."