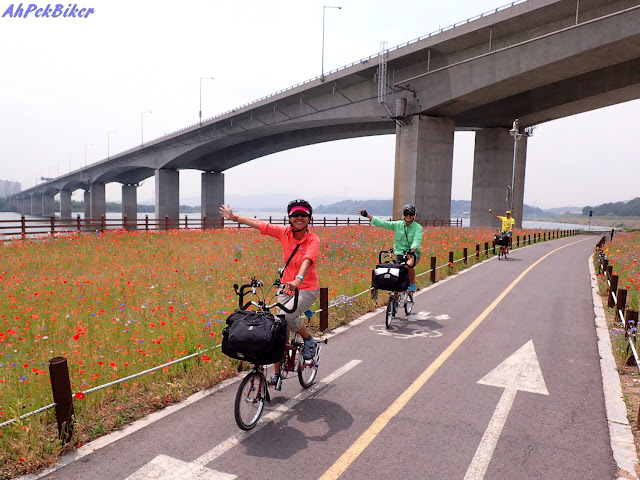 2. Ride Conditions
Most stretches along the river trail were not shaded, so do cover up or apply sun block. The route was fairly flat except for some steep stretches that veered of the river trail to avoid cliffs.  Some of the slopes were as steep as 10 gradient; on the cycling route map below, click on the top left square, scroll down to the bottom and select satellite view to see where these slopes are.
The weather was cool at 24°C to 27°C day time and dipping down to about 21°C in the evening. 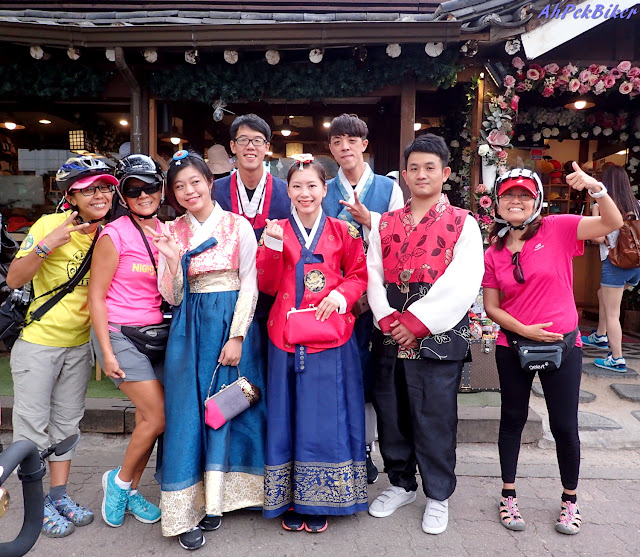 The previous day was a good one of exploring the heart of Seoul, finding many interesting places like parks, palaces, an street market, etc. and ending a good dinner too.  Our first day at the Ara Waterway was a good introduction of on the Han River Cycling Trail, one of the trails of Korea's Four River Trails. Today we continue on the trail to head for Yangpyeong whilst enjoying the charms of the Han River sceneries.

Ride Route - Seoul 53 Hotel>Anguk Station>by train>Oksu Station>Ttukseom Observatory>Gwangnaru>Paldangdaegyo Bridge>Paldang Dam>Yangsu.
Our debut ride along the Hangang River Trail starts with a short train ride to Oksu Station from where we started cycling. The trail would take us pass river jetties, an observatory, beautiful bridges, an imposing dam and through an old railway tunnel too.

We say our goodbyes to Park and his son Sean and took a short ride to the Anguk Station from where we headed to the Oksu Station via Line 1 of the subway. 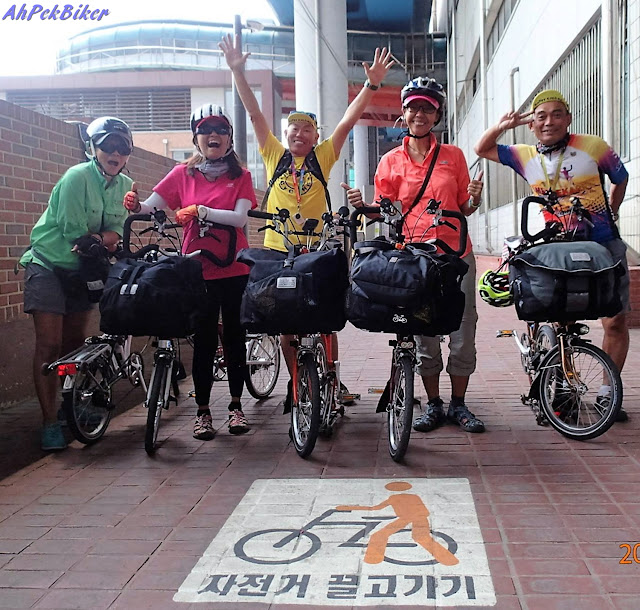 10:10am - And it's time to kick off our Han River Cycling Trail riding; this memorable photo by Sin shows our eager and happy faces. The trail for us starts just opposite the Oksu Station where a prominent floor sign indicates this. 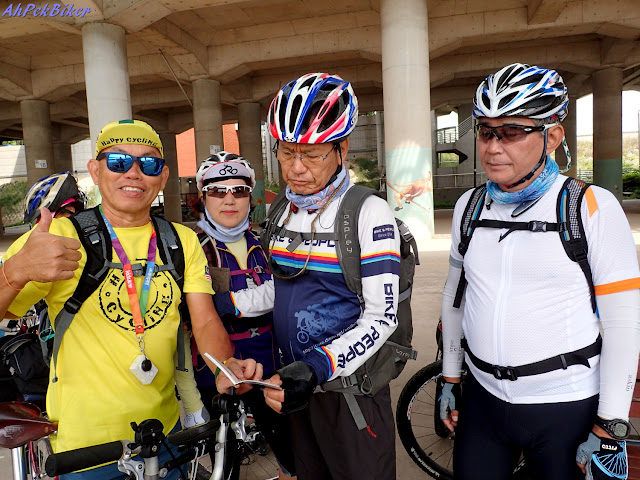 This led us down to a wide rest area below the Dongho Bridge where it intersects the Ganbyeonbuk-ro highway. A moment pause here, do we head left or right; best we ask for directions from the local bikers; don't want to end up in Timbuktu do we?
Showing them our Korea Cycling Road Tour Passport and repeating our destination "Ttukseom... Ttukseom". We must have pronounce it wrongly as they shook they head; that is until we pointed at the map in the passport...."Aah...." and they pointed us in the right direction, to the left it is!
Right would have taken us back towards the Mapo Bridge and the Ara Waterway, which we did during our first day. 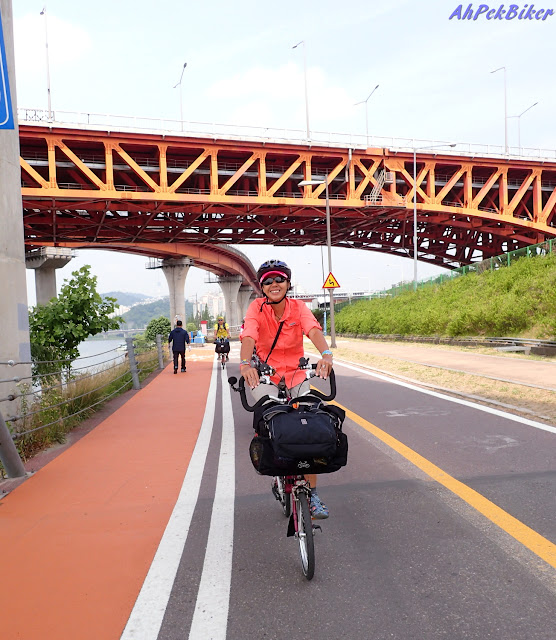 We rode out from the dimness of the underpass and out to the bright sunshine, Anne's shirt matching the orange Dongho Bridge that we passed! This is going to be a colourful ride! 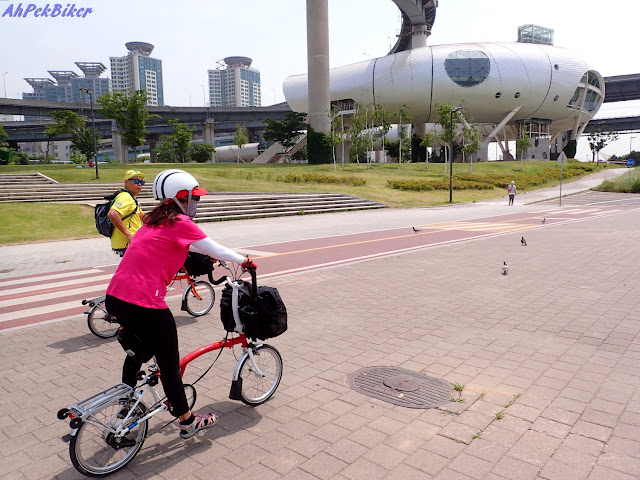 The weather was cooling, and with our brisk riding we soon reach the first certification centre - the Ttukseom Observatory. Just for note, certification is by stamping a chop onto the relevant place in the passbook. This can be done at manned centres (usually in the receptively named building nearby), manned booths OR at those red English looking phone-booths. Most of the time we did it at the phone booths. 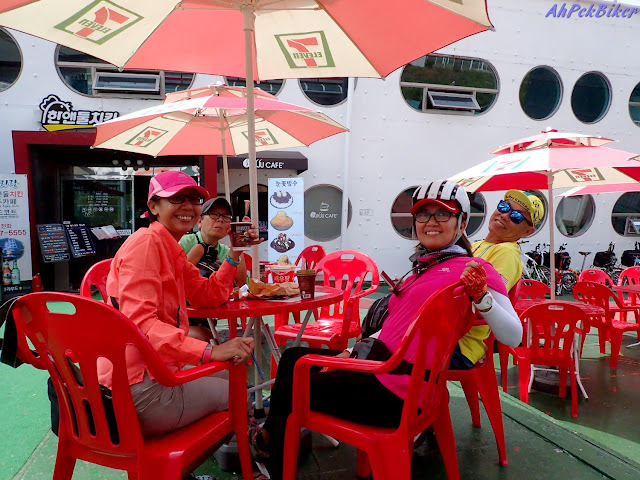 11:30am - Riding along the banks of the Han River, we passed by many jetties. Some are private while others are opened for water sports recreation. We stopped at one where there was a 7-Eleven. Time to chill out a bit, to sit down have some drinks and enjoy the scenery while a cool breeze blew by. 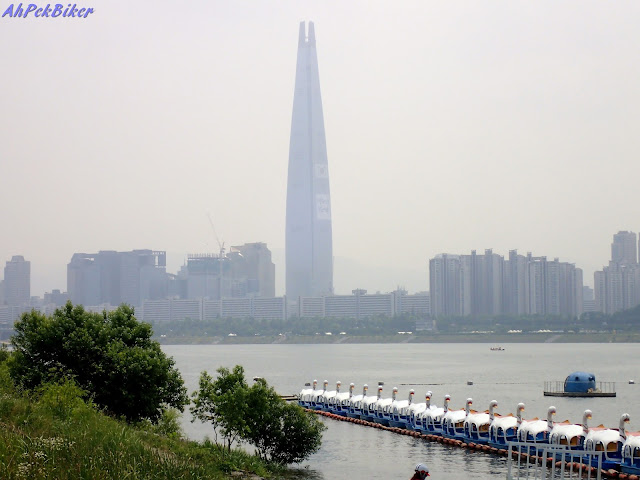 The jetty sticks out into the river and gives us a good view; this view has swan pedal-boats with the Lotte World Tower (롯데월드 타워), shaped like a bamboo shoot, shooting up skywards in the background. 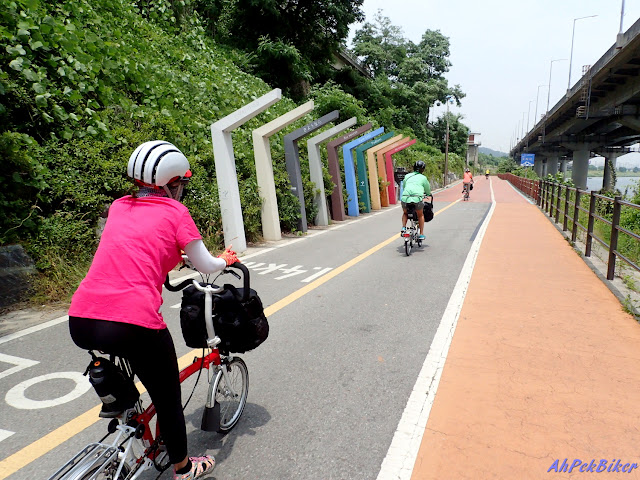 It was great cycling here, the cycling trails near Seoul were wide and well maintained. It was a fairly level trail, easy to ride on. 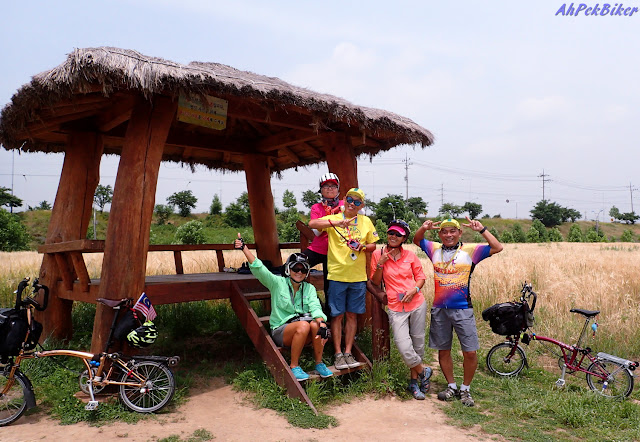 Rest at a hut after a traditional Korean thatched roof farmers hut, and really set in a small wheat field. 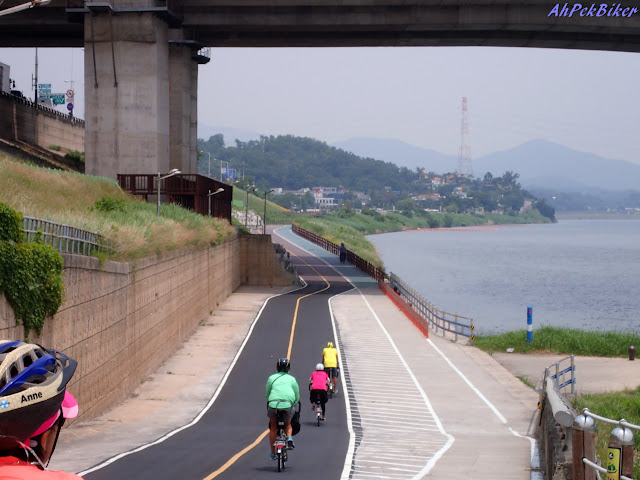 There were some small slope, manageable to ride up and fun to go whooshing down...
But what's up ahead? Doesn't look good... 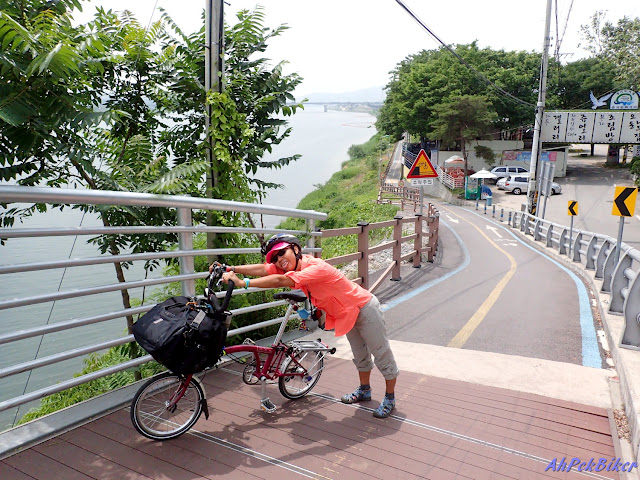 Ahead was one of several points where cliffs come right up to the edge of the river and the trail had to skew inland, climbing up the slopes up the hill. Well, the trail climb up the slopes; we had to come down to push as it got rather steep. 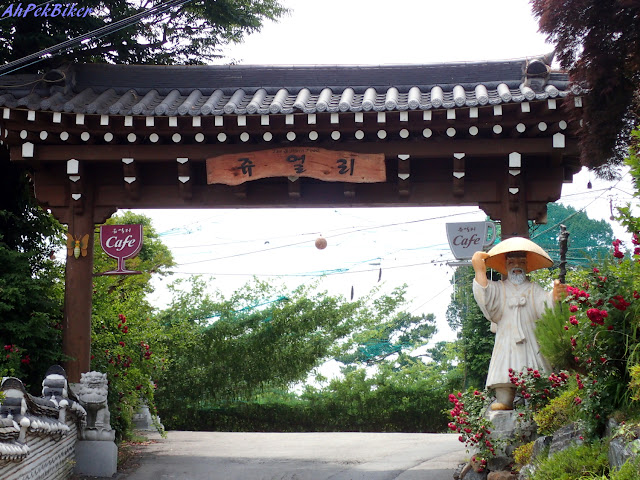 Heading up the hill had its perks, we were onto shared lanes and up here was a cafe with a nice entrance and beautiful carvings... 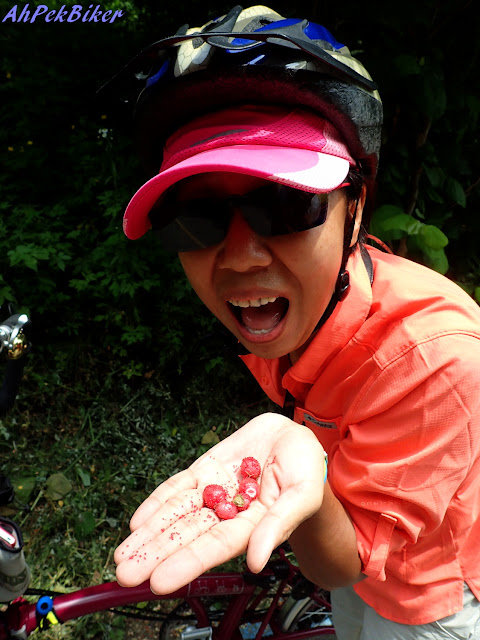 ... and further down the narrow road - wild strawberries to be picked! 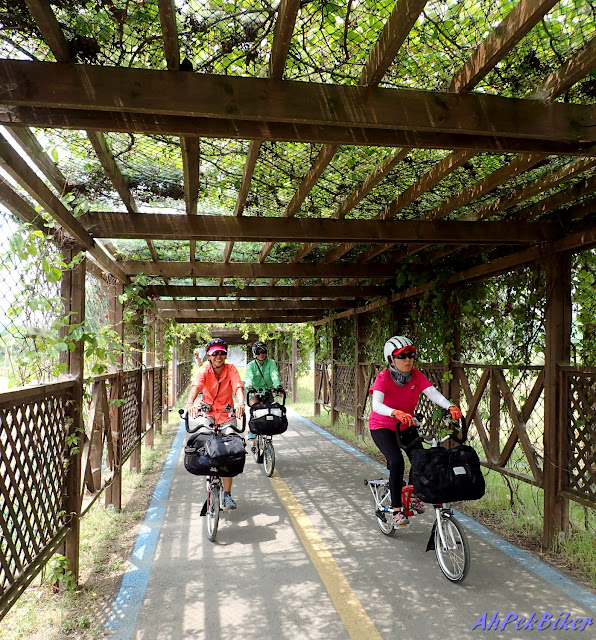 Back down the cliffs, it was through shaded vine-creeper pergolas that led to... 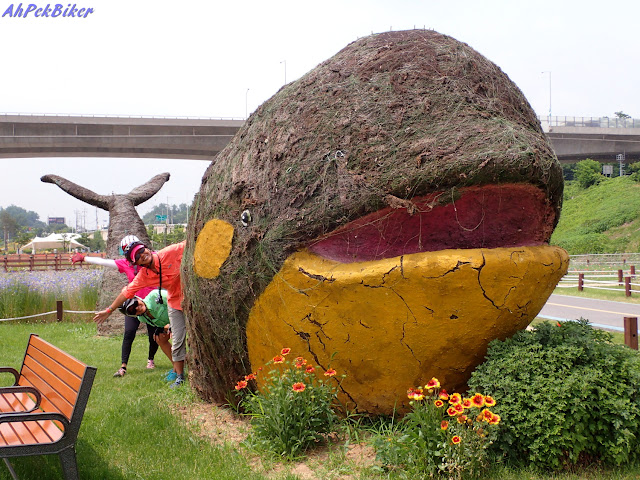 ... a large park. For want of a name (or more like we could not read the Korean name) we called it the Whale Park as there was a statue of a moss-grown smiling whale there. 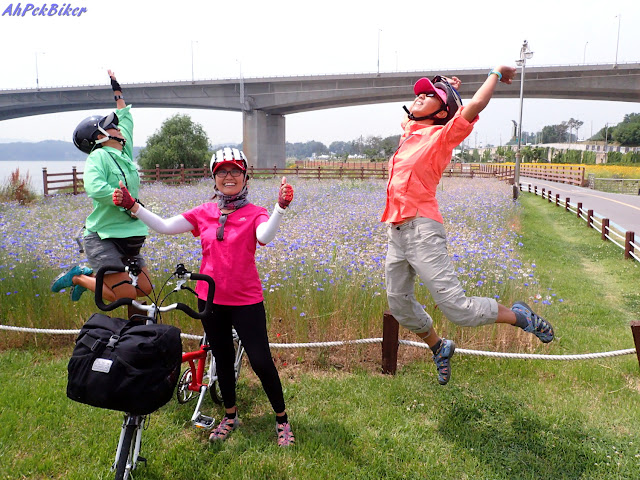 It was a beautiful park with yellow, violet, red flowers; each growing in the different patches painting the park a multi-coloured hue. The girls were most happy here, jumping for joy! 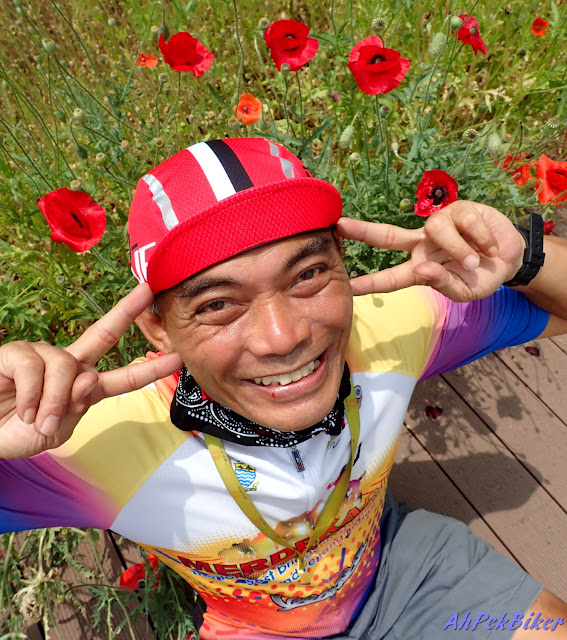 Their exuberance was infective; here I am in one of my silly Japanese anime pose; with a red cap (which I bought along the trail here) matching the red poppies. 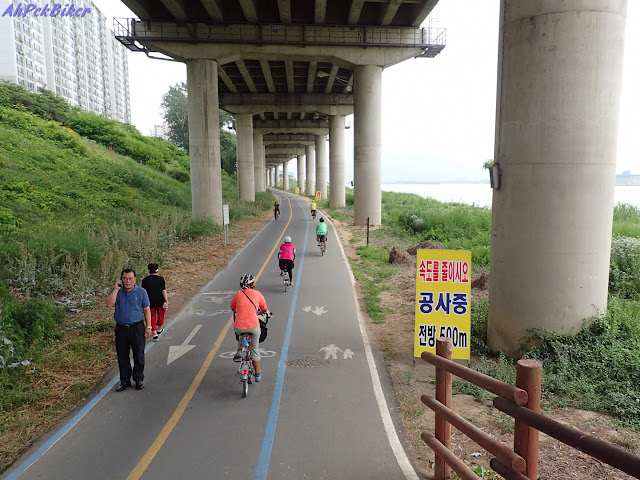 We rode under bridges (the Jamsil Railway Bridge, the Olympic Bridge, the Suseok Bridge, to name a few - just to many to recall all). This stretch here was under the elevated section of the Ganbyeonbuk highway. 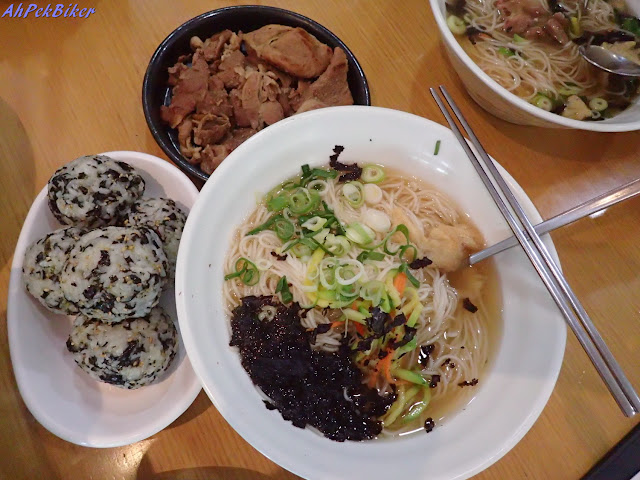 3:00pm -  the nice ride and interesting scenery made us forget about our hunger until mid-afternoon.... then our tummies were calling out "Bae Go-pa-yo"! Fortunately along this part of the trail there were many foodie outlets to choose from, we turned slightly off the trail to an eater and had a nice meal of noodles, soup and rice. The meal was average but it was our first meal along the trail, so somewhat of a celebration. What got to us were the rice balls (called jumeokbap, shown on the left of the above picture); they were made with seawee (gim) and sesame seeds sprinkled within them. 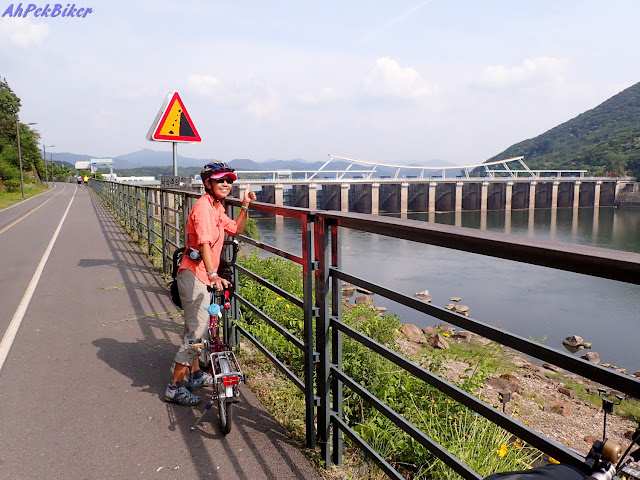 At the Paldang Dam and another certification centre. 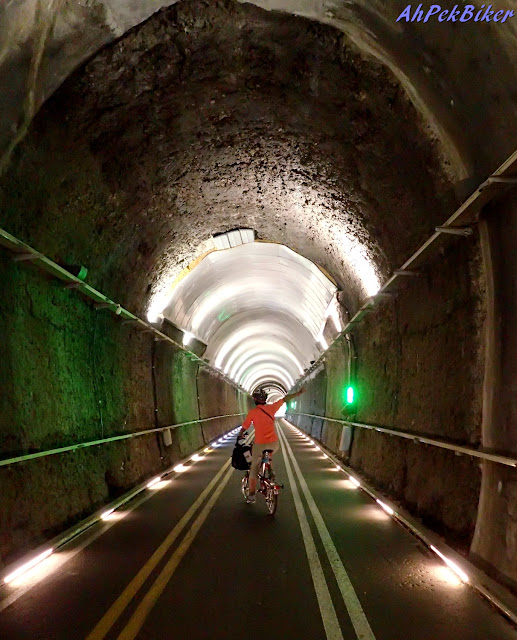 And right after the dam... through the old Bongan railway tunnel... fortunately, otherwise it would have meant a seriously steep climb to get across the hill ... Phew! 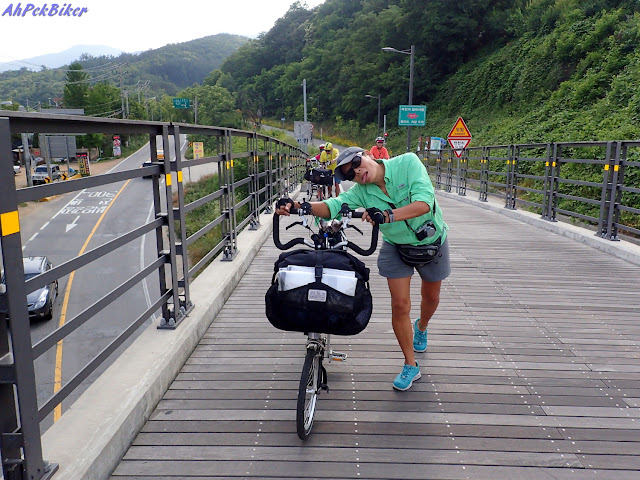 4:30pm - time to get out from the trial and start looking for accommodations. We had thought we were getting out at Yangpyeong; but it was not, we were at Yangsu, a small town within the Yangpyeong county. 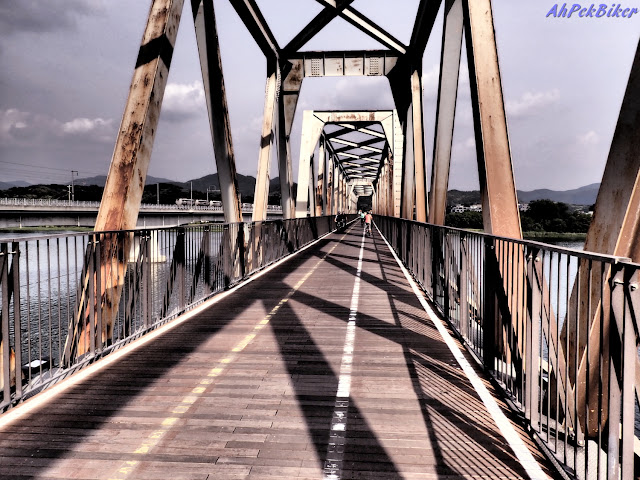 Our exit led us across a old railway bridge, made all the more quaint with its rusty girders and wooden planked flooring. 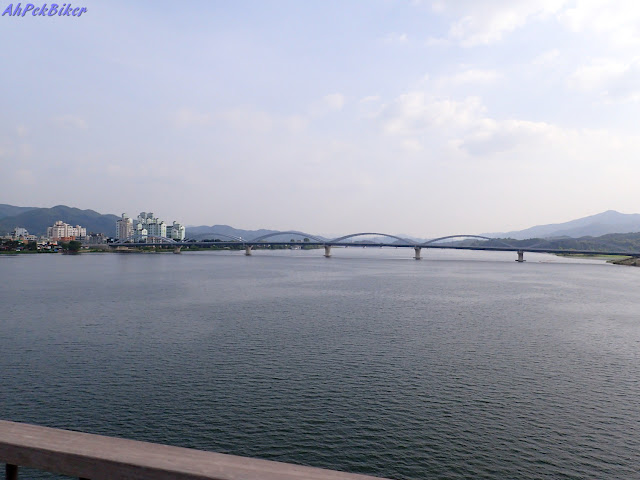 From here - a view of Yangsu town and the arches of the road bridge spanning over the Bukhangang River, a tributary to the Han River. 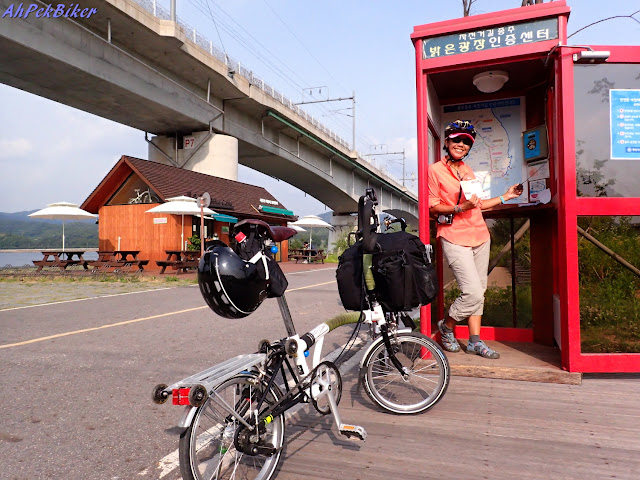 Just below another certification centre. I think it's the Neunghae Bridge. I am not sure as there was no signs in English.


We went looking for a suitable motel; we had not pre-booked any along the trail but accommodations was not a problems as even in smaller towns there were several motels around. We stayed at the IF motel; it was our first exposure to Korean motels and we were surprised to each receive a "Happy Pack" which consisted of toothbrushes, shavers AND condoms and other sex-aid lubricants!
Hah! The Koreans must be good lovers; no wonder there are so many Korean love story dramas around. 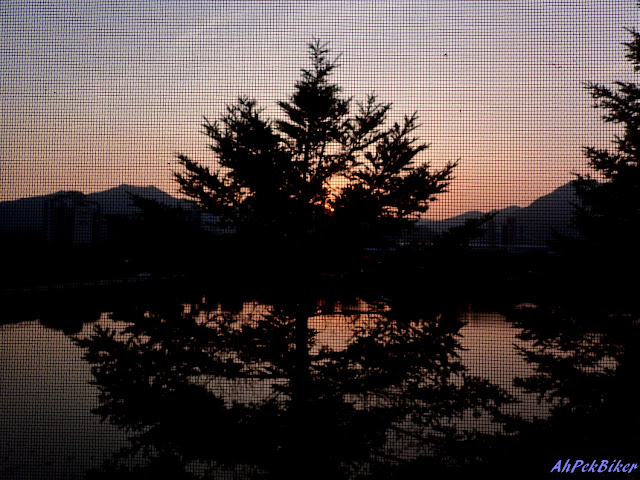 Staying at these motels was very affordable; at 30,000KRW per room per night. The girls shared a room, I took one by myself while Jo & Sin took one for themselves. The rooms were big, came with wifi, fridges with three complimentary canned drinks, 3-in-1 coffee packs, green tea packs, etc. No complains here, even though we were not here for romantic rendezvous ...
For couples, with a beautiful view of a sunset reflecting romantically onto the river, the Happy Pack could come in handy ... Heh heh! 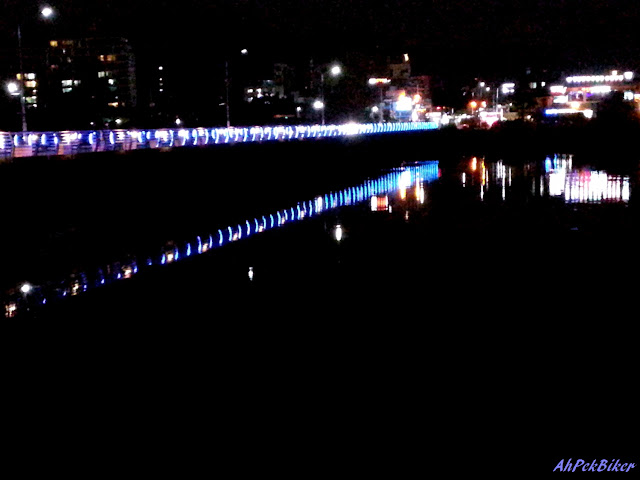 After freshening up and doing whatever we had to do, we took a walk to town via the bridge. At night it was a spectacular view, with changing coloured light on it's walls. We would have stayed longer but there were lots of insects buzzing around. 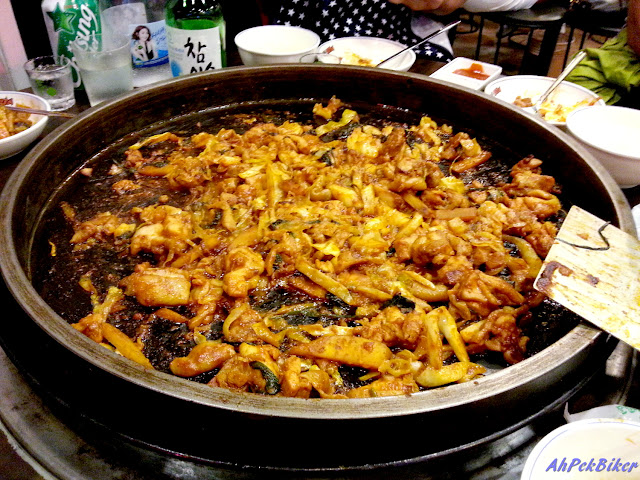 Dinner was dakgalbi at a Myung Mule outlet in town, but it was a total different experience from the on we had in Gapyeong, a few days earlier where we had to do our own cooking. Here a master chef attended to the us; when we wanted to do the frying ourselves, he said "No Touch!". When we thought the food was ready, he said "No Eat!"; it wasn't ready yet.
Sticky old fella... sort of a martinet! Finally he said "Eat! EAT!" with a charming smile. His dakgalbi was fantastically good, he was a master chef and was right to do the cooking all by himself. I called him Heong (Korean for big brother) and thanked him. Cheekily, he asked for my age, found out I was older and called me "Heong" instead; with the cooking done he turned out to be a friendly person.
We had the meals with bottles of Soju, our first while in Korea....


건배 (Geonbae)!
(that's Cheers in Korean; a toast to a good day and more to come)

A nice video by Sin of Day 5 of our South Korea tour, i.e our start on the Hangang River Trail, from Seoul to Yangsu