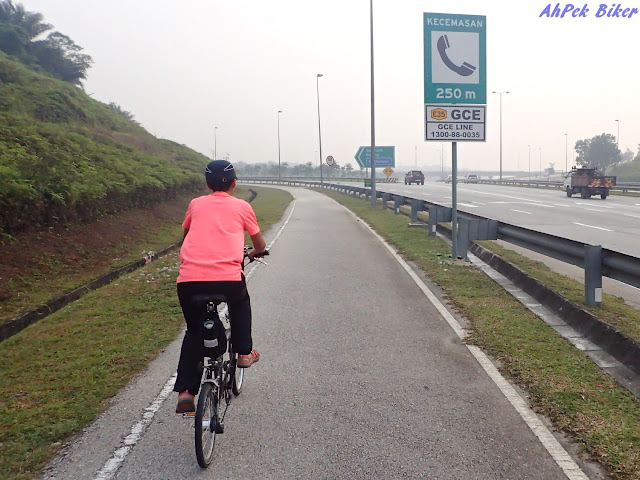 Route Recommendations :
1. The Guthrie Corridor Expressway (GCE) is an expressway that connects Bukit Jelutong to Rawang. It has an excellent motorcycle lane which is in good condition and with light traffic, so many cyclists are attracted to cycle there. Also there are several mini-dragon backs to push oneself even more.
2. Do start early as the GCE does not have well shade and it does get hot in the later part of the morning.
3. This is a pure cadence ride for those who want to build up their 3 S's - Strength, Stamina & Speed. There is not much to see along the way unless one gets out of the expressway; for example to Tasik Biru.
4. There are several rest areas to stop at to top up water, regroup, rest, etc. A good place would be the Elmina Rest Areas (both North-bound & South-bond) as these are roughly at the mid-points of the route.
5. As many cyclists ride this route, it's a good place to make new friends. 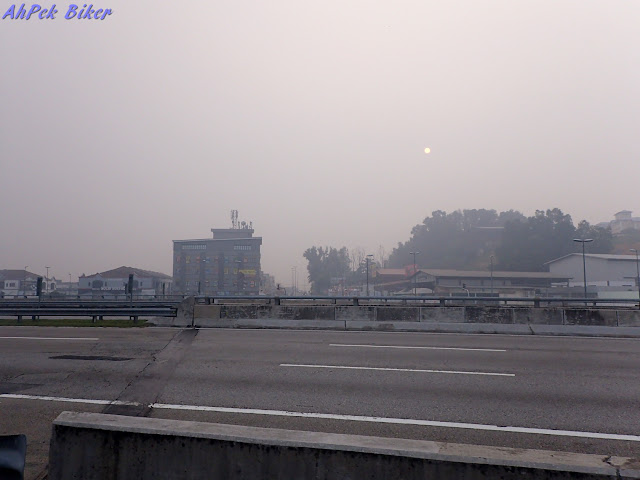 It's that time of the year in Malaysia, the HOT season. The weather was hot and this year it was compounded by the haze caused by open burning in Sumatra. The haze got so thick that even the sun was shrouded and it's glaring rays were subdued; one can even look at it without squinting or hurting one's eyes. Never-the-less, after a lull in cycling haze-wise, our legs were getting itchy. A couple of friends would be taking part in the Port Dickson Triathlon and were starting their training. A good place to do this would be at the Guthrie Corridor Expressway with its good motor-cycle lanes that have only light traffic. As an added bonus, there are several mini-dragon backs along the way.
THE RIDE

A look at the above elevation of the route shows why the GCE is a favourite for cyclists. Other than the good condition of the motorcycle lanes on which to ride on, the route has a series of mini dragon-backs to taxed cyclists more. 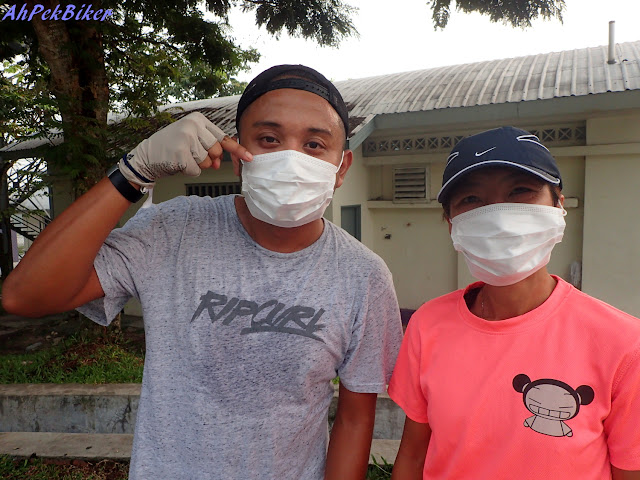 First things first though - how to handle the haze. Well, one way was to wear face mask to filthy out the smoky air. It's a good way but then breathing through the bask was not easy, and it does heat up one's breathe and mist up sun-glassed.
Kim and Baki here looking like a doctor and a nurse. 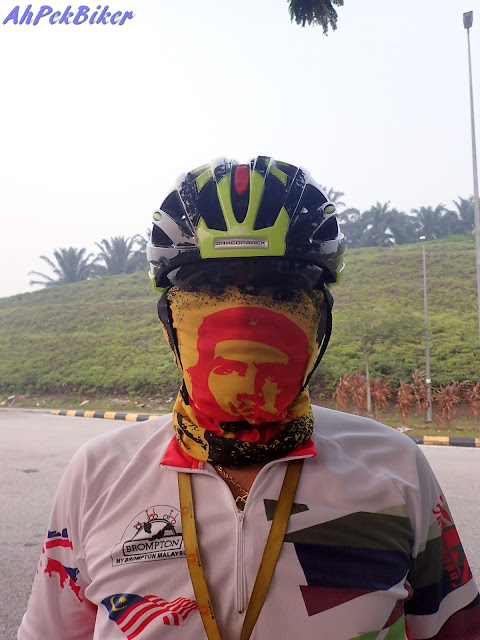 Another way was to wear balaclavas; it's better than the face masks but these do not hamper breathing that much. That's me here, looking like one of those Ninja Turtles! 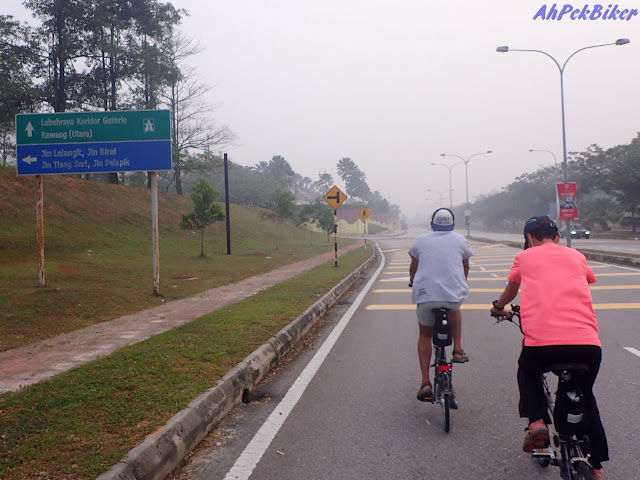 8:00am - After a breakfast of roti canai at Restoran Asam Pedas at D'Bayu neighbourhood commerical centre we rode off, cycling along the residential streets of Bukit Jelutong to head for the GCE.
Asam Pedas does serve some good nasi lemak and Nasi Melayu, but we had some serious cycling ahead and kept our meals light - the only bonus was my usual couple of half-boiled eggs. 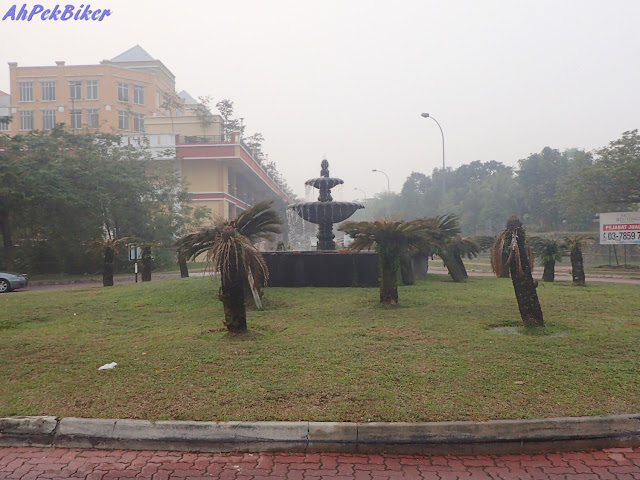 Rode passed this fountain that was not looking so grand on account of the haze. The gloomy weather did put a damper on things; yes, we were here to to some cadence cycling but some nice views would have been encouraging. 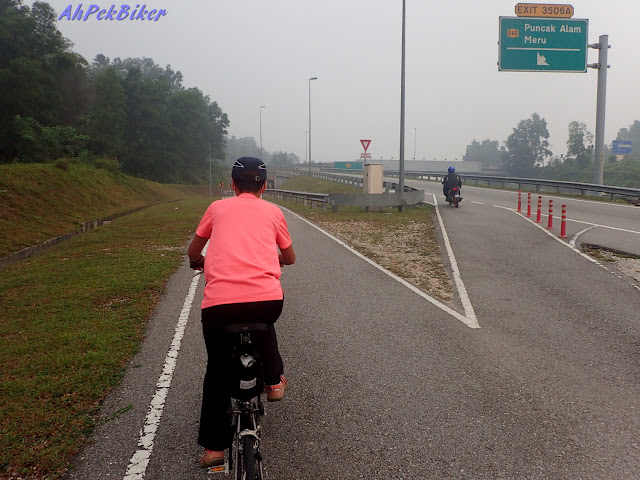 We were riding at a good pace, within six minutes we were entering the GCE at Exit 3506A. Clear of heavy traffic, it was time to step up the pace. 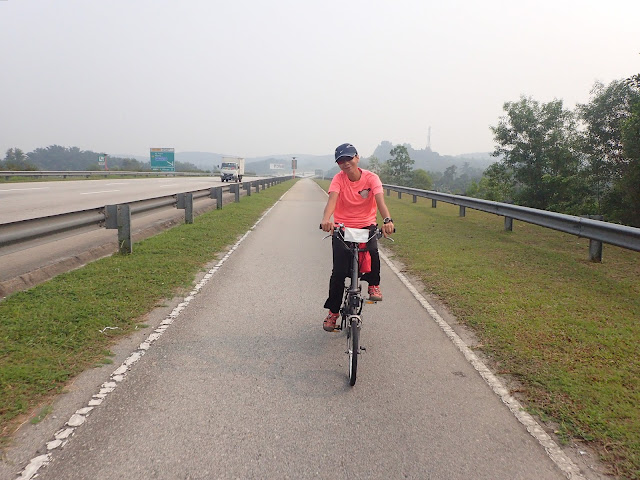 The slopes along the GCE are gradual and not overly steep, so it does not hamper the smooth pace of cycling too much - there is no need to come down and push. 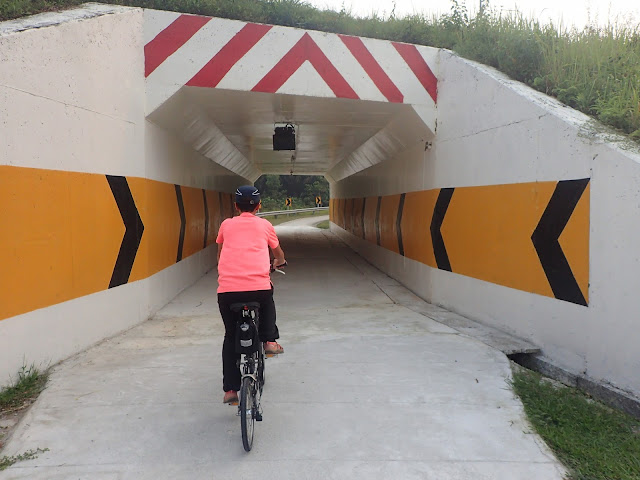 There were several under-pass tunnels, these are brightly lit and no surprising dangerous pot-holes too. 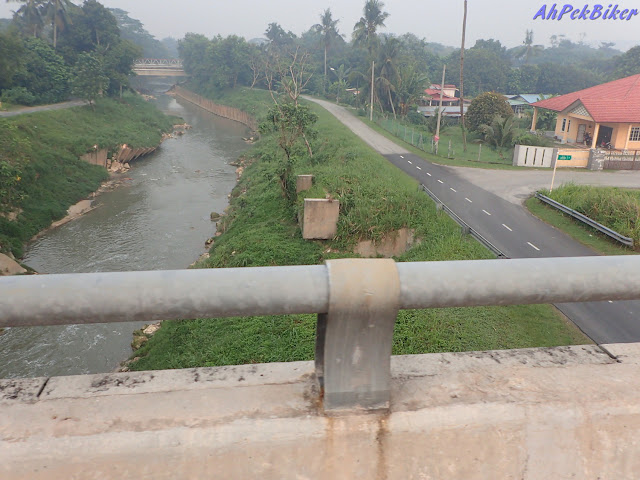 Passed by some streams, nothing much about those unless one wants to go down and explore the villages nearby. We did pass by the nearby Tasik Biru; apologies in my concentration, I missed out taking photos of that. 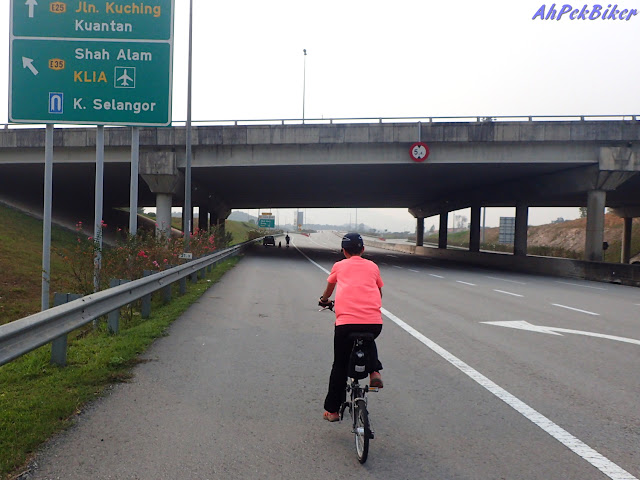 9:30am - We reached the Kundang Interchange averaging about 16km/h. Not too bad, considering that we were doing the GCE on 16" Bromptons, and that included a couple of stops. This is the turn back point, and some cycling onto the road to loop back to the motorcycle lane on the other side of the GCE is required. 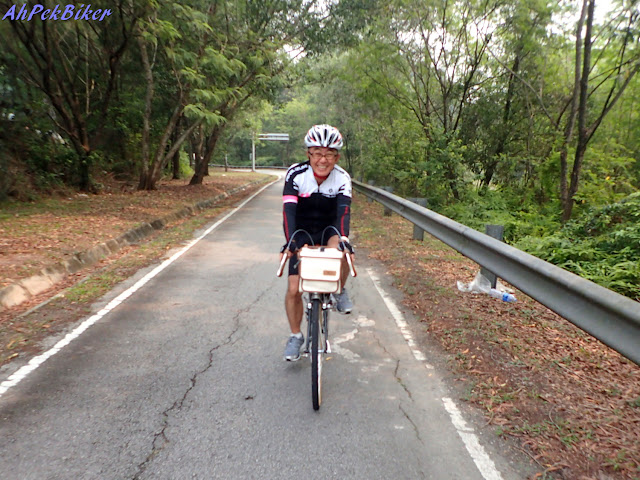 Surprisingly, we did not meet many cyclists along the way, perhaps the haze had kept them away. One that we did meet was this Japanese man based in Malaysia, he was riding a new road bike and was training himself for a cycling tour in the near future. Despite the haze, he was ever-smiling. 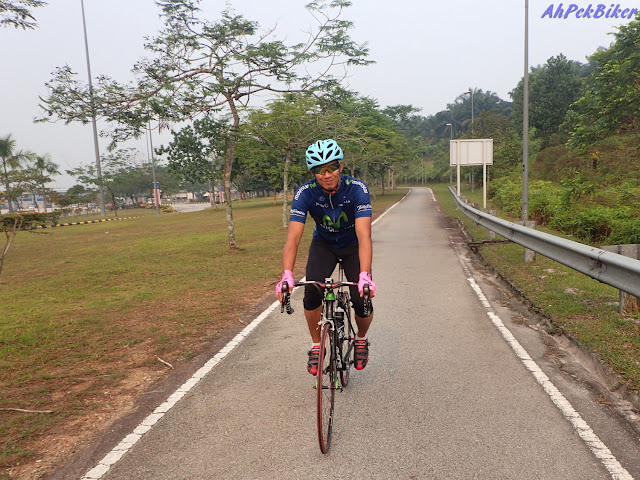 Met this other local on a racer bike. Although he was on a race we did manage to pace him for a while; perhaps wanting some company, he was just taking it slow. 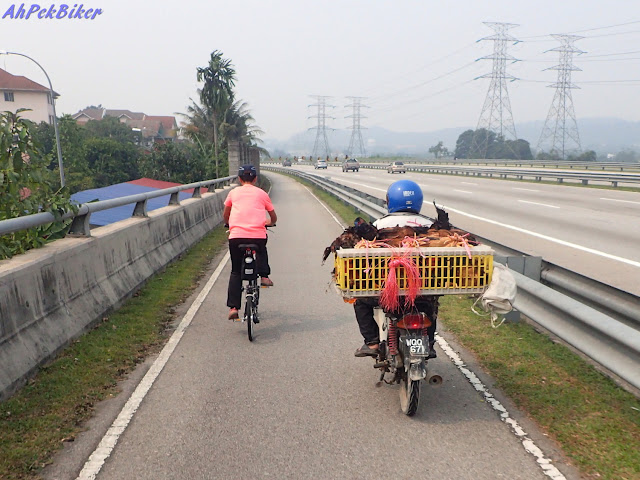 There were also only a few motorcyclists using the road. This fellow on the way to market with his chicken, beeped at us to encourage us on. 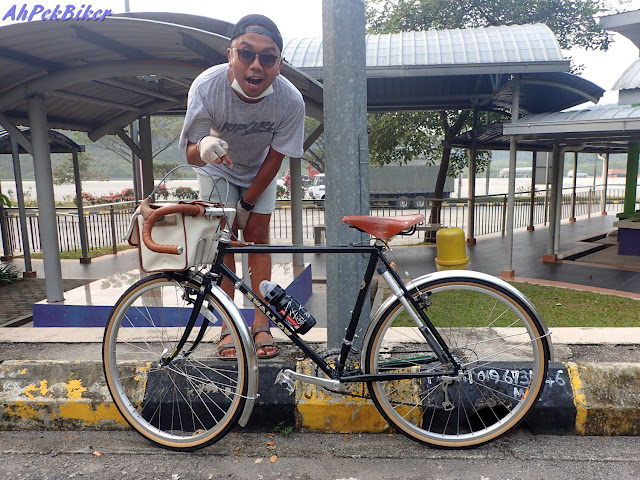 At the Elmina R&R Area, we stopped for a rest and also to chat with the Japanese man and admire his bicycle. It is a Taiwan-made "Swallow" touring bike...
NOTE: Nearby is the Elmina Interchange that would lead to another 30km Elminay Loop around the beautiful Elmina Valley. 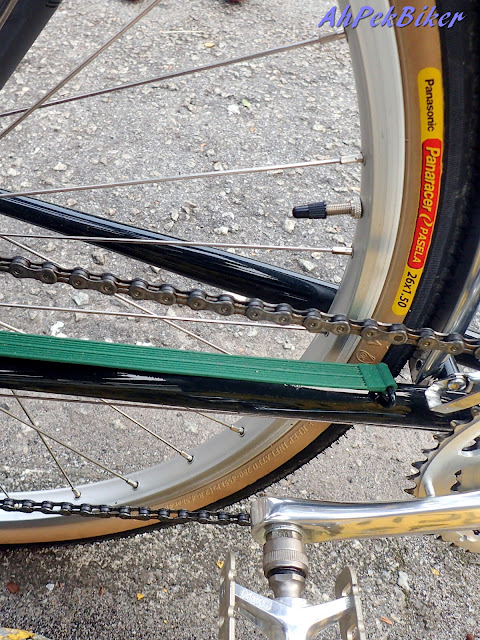 ... with Panasonic 26" "Panaracer" tires; these are hard to come by in Malaysia. 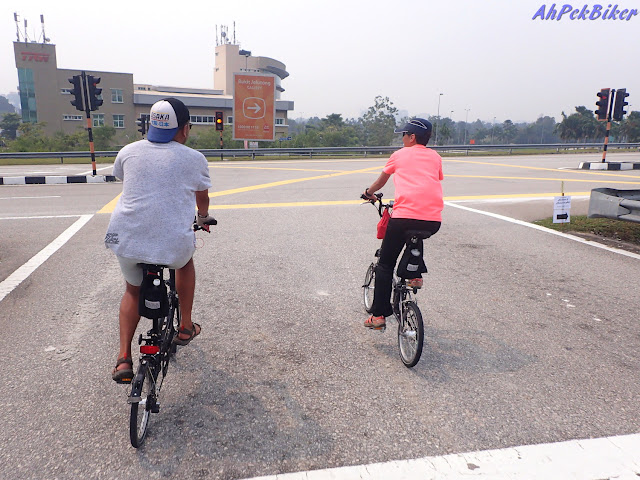 Baki who's familiar with the roads here advised against using Exit 3506 to get back into Bukit Jelutong as the traffic there was rather dangerous for cyclists to cross over. Instead he took us further down to the TUDM exit to get out of the GCE. 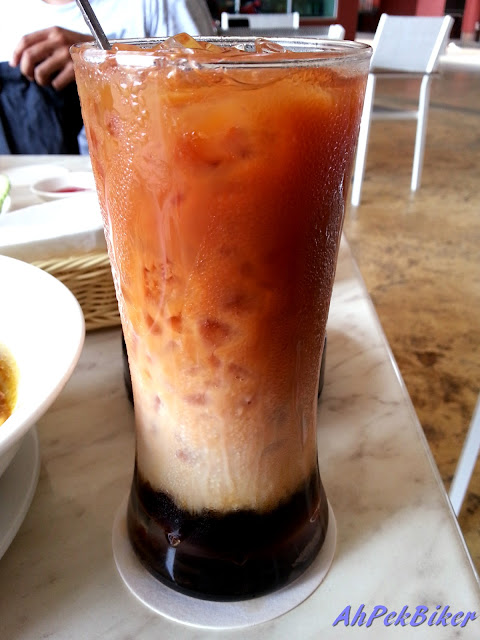 11:15am - We are back at D'Bayu and rewarded ourselves with some drinks at the Papparich outlet, like this three-layered honey-milk tea.
We took 3-1/2 hours to cover the close to 50 kilometre route. Take away a half-hour for rests and we averaged closed to 20 km/h; not to bad considering we did in hazy conditions.
Yup, we shall do it again and hopefully improve our time.

UPDATE 2020: The Elmina locality along the GCE has now been developed with nice areas to ride in, check out the extended Elmina Loop! 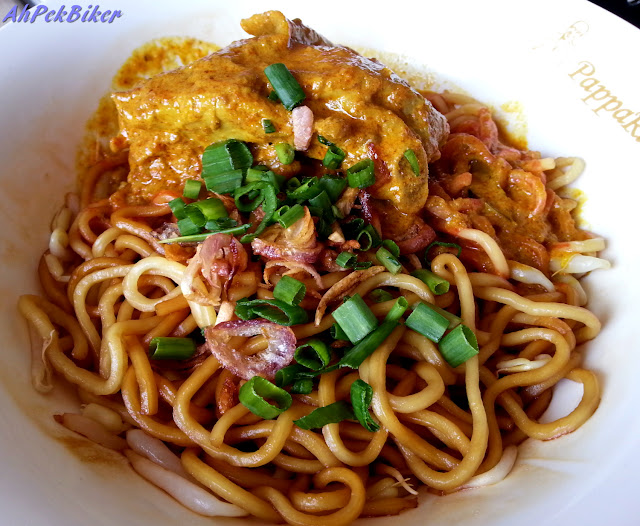 Since it was almost lunch time, might as well have eats. Tried this dried curry chicken noodles. Not too bad with that thick curry stirred into the dry noodles. 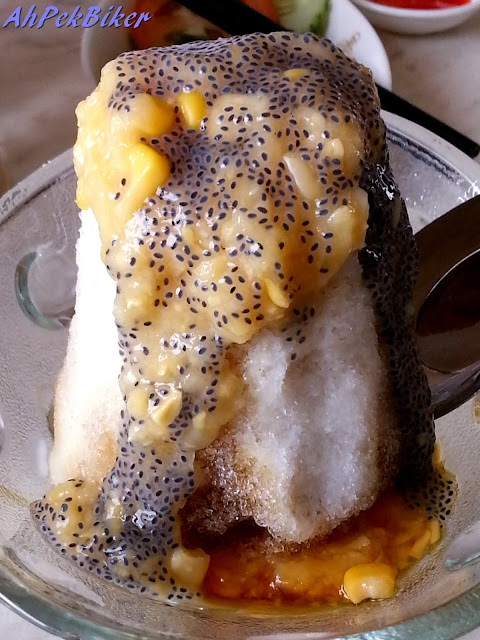 
You are at - Jotaro's Blog / AhPek Biker / Cycling Malaysia / Selangor / Guthrie Corridor Cycling
If you like this, view my other blogs at Jotaro's Blog
(comments most welcomed below. if you like this pls share via facebook or twitter)
Posted by Jotaro Zen at 1:54 AM