Route Recommendations :
1. Malacca City is a good place to cycle, in fact cycling is the best way to get around within the city area during peak holidays seasons when many tourists throng to the place resulting in traffic jams.
2. Interesting places to visit includes:
- The Malacca Riverside with it's casual atmosphere, many wall murals and a musical fountain.
- Various historical sites such as the Stadhuys (a Dutch fort) and A'Famosa (ruins of a Portuguese fort), etc.
- The rocky beach adjacent to the Masjid Selat Melaka to view one of the most scenic sunsets in the world.
3.  Malacca also has a good Baba-Nyonya food, there are many outlets selling these, such as:
- Donald & Lily's which serves good authentic (we had brunch there).
- Bayonya where we had dinner. The food here is average only.
- Another good place to try is Aunty Lee at Ujong Pasir.
- Also don't miss the chicken-ball rice. 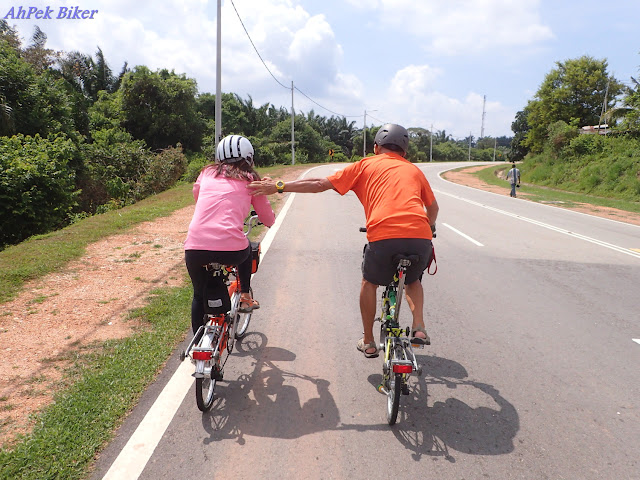 The day before we had rode a hot and long ninety kilometre route from Seremban to Malacca City. Although it was a tough ride, most of us were able to make it and were rewarded with a good sense of achievement. 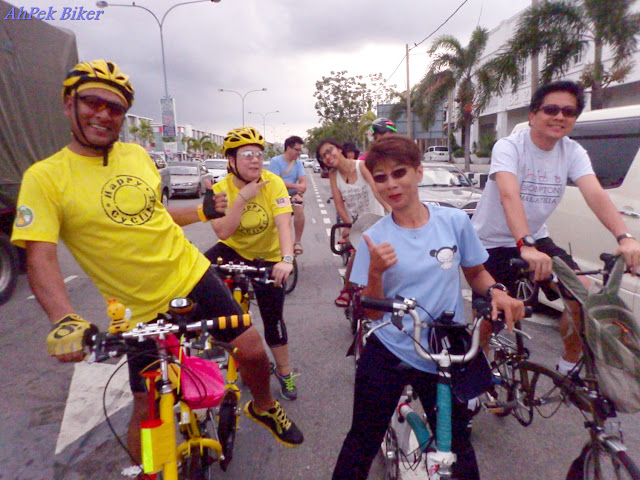 11:00am- After a good-night's sleep, we are ready to set of for a full day riding around the city. Actually most of my buddies woke up much earlier and had done breakfast followed by a bit of exploring of the nearby streets. This old AhPek needing more rest, woke up later, and breakfast was some Nyonya kuehs being sold by a friendly lady running a road side stall just next to Cheng Ho Sayang Guest House, where we were staying. 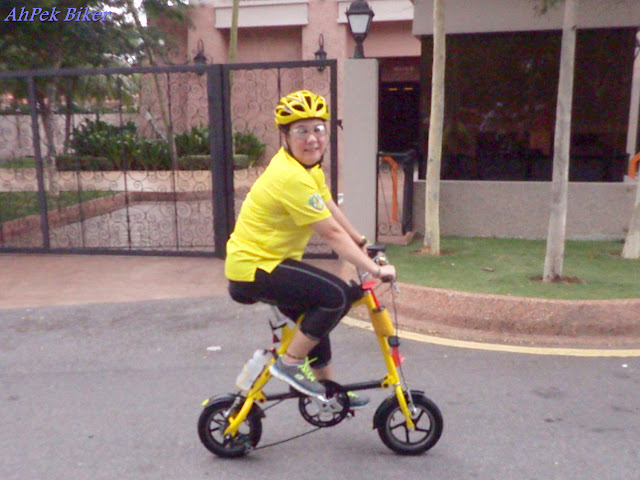 Larry and Winnie had brought along their compact Jab Nanoo 12-inch bicycles. These bike may look small, but they are compact when folded, and are handy for cycling around the city. For those who don't feel like using their leg power, there is even an electric pedal-assist version. 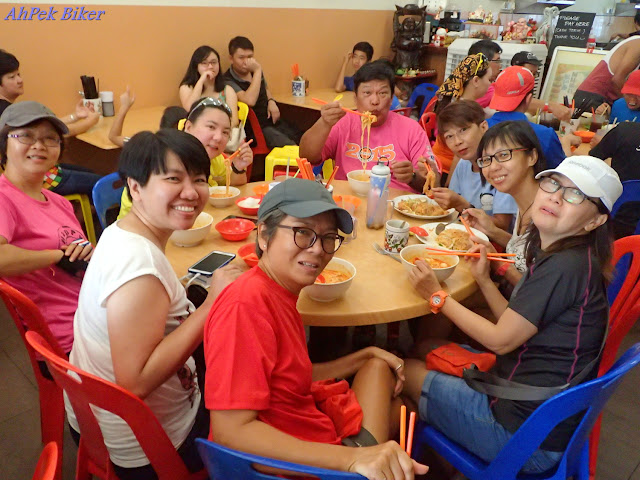 Within twenty minutes we were at Donald & Lily's Nyonya Food restaurant for a brunch. Even at this hour business was brisk and a long queue were waiting to be seated. Fortunately for us Baki was a sort of god-son to the old couple. Family connections helped and we did not had to wait long to be seated. 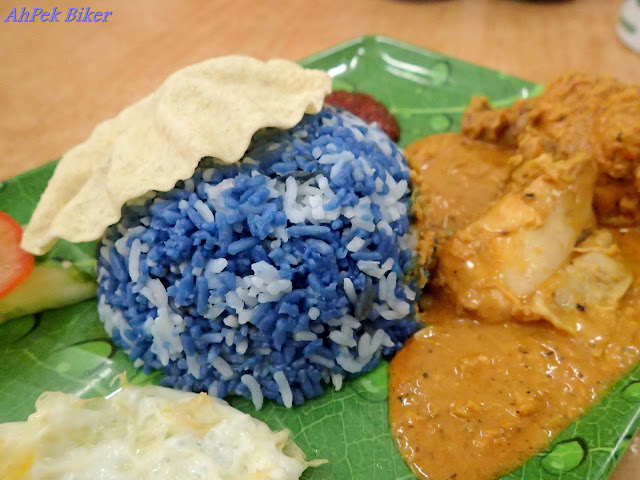 This is a restaurant run by a Nyonya family so the food here are authentic and also well presented. Their Nasi Lemak has a unique dark blue (with natural dye from the morning glory flower) and white combo. At first I made the mistake that this was the Pulut-Inti rice which has a similar combo colouring.
Anyway I detract. The rice had a good savoury creamy flavour of santan while the chicken curry was thick and good, it could do with a bit more oil though. 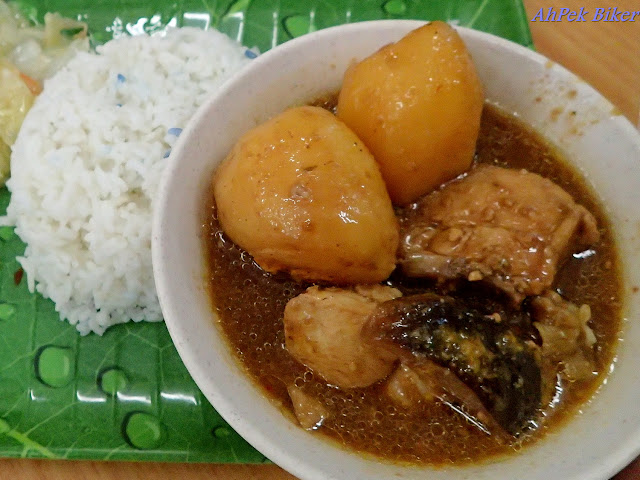 Some of my friends had this Ayam Pongteh that came with white rice. I was fairly good but the flavour was not as strong as the one from Auntie Lee's (another Malacca Nyona restaurant); somehow I felt something was missing, perhaps the aroma of the kayu manis?
The cendol should not be missed; it came with very fresh creamy santan and one of the best Gula Melaka. I had the Mee Rebus which was okay too; for those from the north do not expect something similar with a strong tomato base gravy, the southern ones don't use tomato gravy but instead have a santan based gravy. 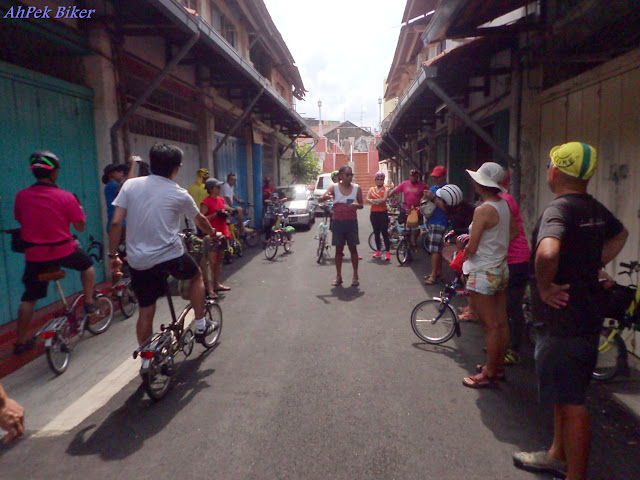 Baki, having done some filming in Malacca, acted as our Dǎoyóu (导游 - tour guide in Mandarin). After brunch he took us to Jalan Jawa.
This short alley has two distinctions; firstly on the left is the longest shop house in Malacca. At close to two hundred feet length (I measured on Google map *smiles*) , the side of the house has been subdivided into several shops making it look like individually disticnt shops when actually it is all under one property.
This place is also called the "Wailing Lane" once as it use to have houses where men used to keep their mistresses. Estranged wives would bring their children here and together they would wail away their woes, that must have been a sorry sight then. 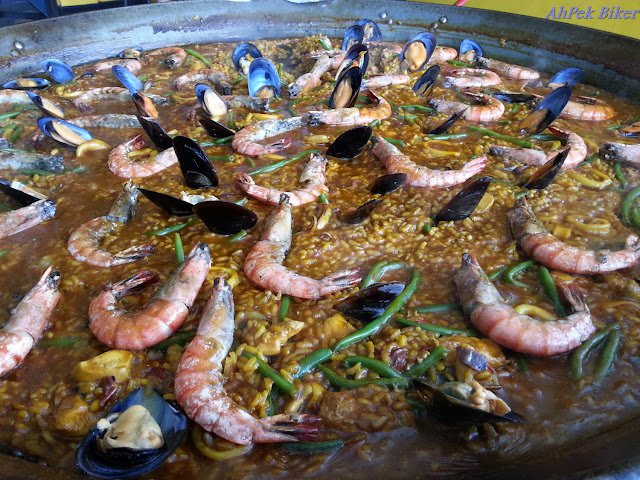 With time to spare, we went over to the La Bodega at the Shores Shopping Gallery to hang out and have some drinks/snacks while some even went shopping. Nearby, a kitchen staff was cooking this Paella Rice at an open cooking area; it did look deliciously tempting but we refrained from taking it as we would be attending a Hari Raya open house soon.

We did achieve an important task at the Shores Gallery; getting a "buah tangan" for the open house visit. In Malaysia, it is customary and good practice to bring along a small gift for the host when visiting. 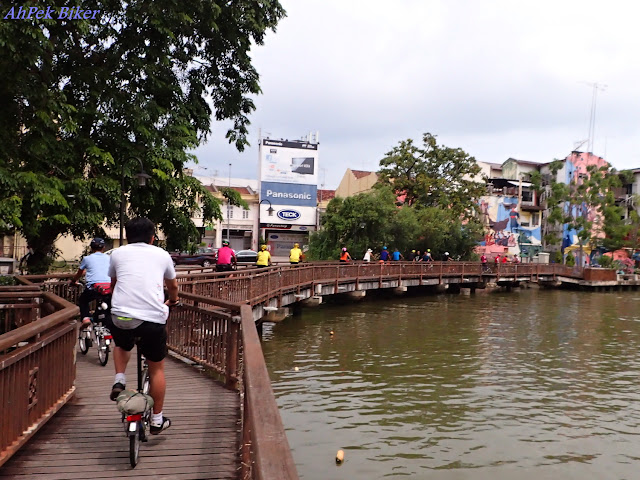 3:20pm - And we are off, cycling on the board-walk along the Malacca Riverside before heading for the roads. The river may not have crystal clear water but it is relatively clean. Much have improved here since my visit in 2012. 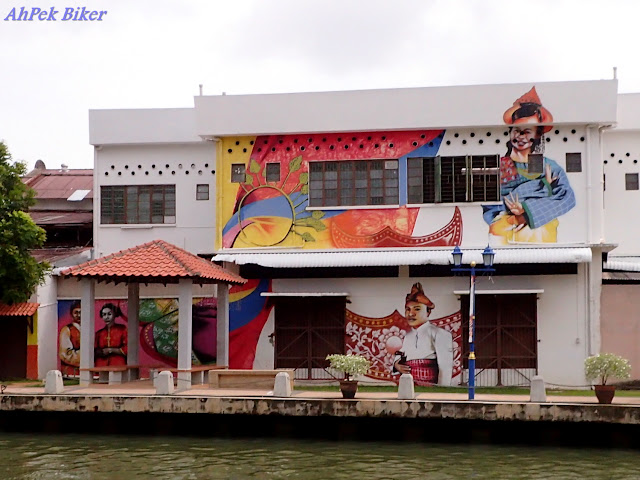 More wall murals have cropped up..... 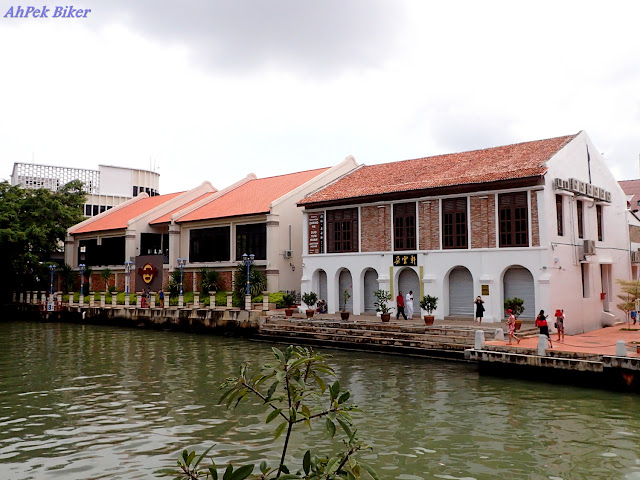 ..... most of the old, dilapidated houses have been restored. Unfortunately they are not for residence and instead house eateries and coffee joints, I guess the riverside properties are just too expensive to stay in.

4:30pm - We arrive at Bukit Pulau for the Hari Raya open house. Anuar, a childhood friend of Albert one of our cycling buddies, had graciously invited us over. He and his family were very warm and welcoming hosts. 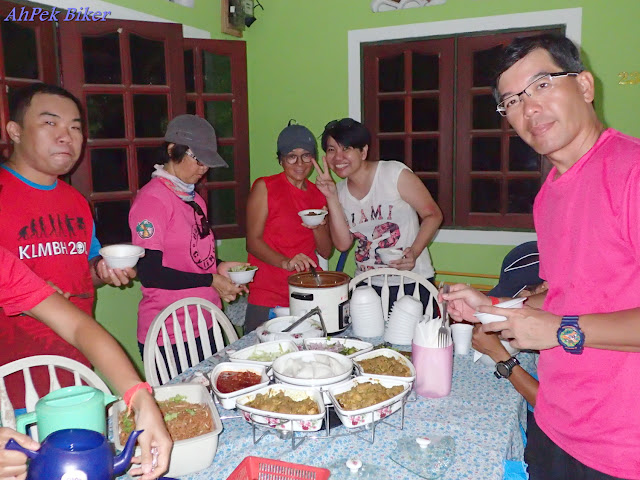 In the usual tradition, Anuar had prepared food, drinks and cakes for us; we are in for a feast! 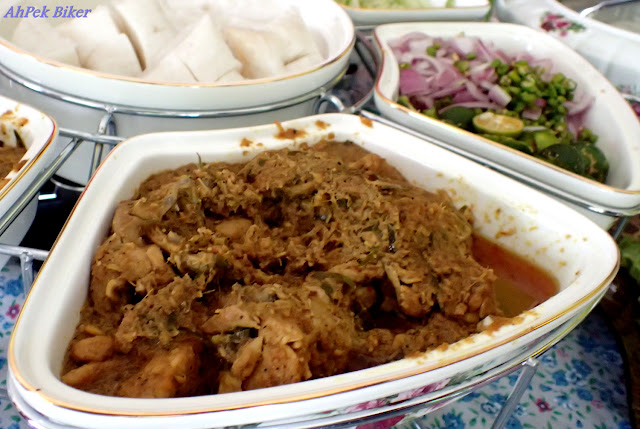 Especially good was his Beef Rendang that went very well with the ketupats. It was done the Malaccan way, i.e. not so dark a curry and had more lemongrass. 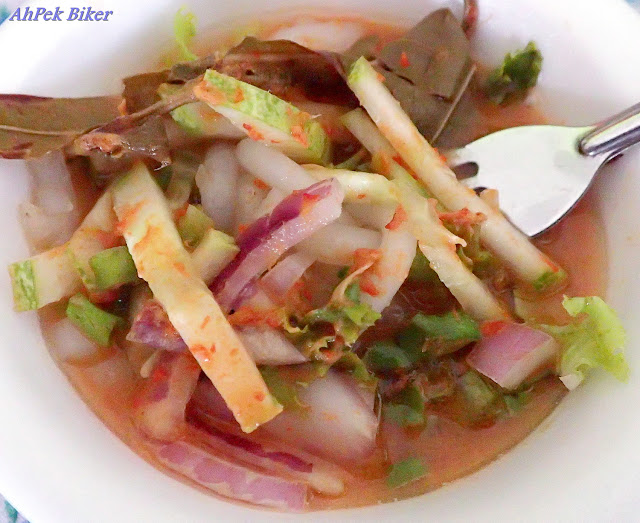 Also very memorable was this laksa prepared the Penang Malay Laksa style. It was so good that one of our buddies whacked four bowls.
I do hope that we did not give a poor impression that we were greedy fellows. Hungry from cycling, we did really eat a lot of his tasty food. Anuar in his graciousness did not show any hint of noticing our odd behaviour. Before leaving we took a group photo with Anuar and his family (see top-most photo). 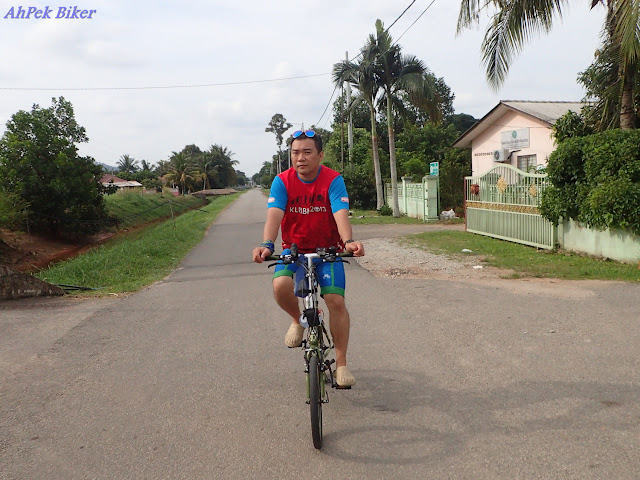 We cycled out along the quiet roads of Bukit Pulau, happy that we did get a chance to celeberate Hari Raya in Malacca.
Many thanks to you Anuar for this opportunity, we had a good time at your place. 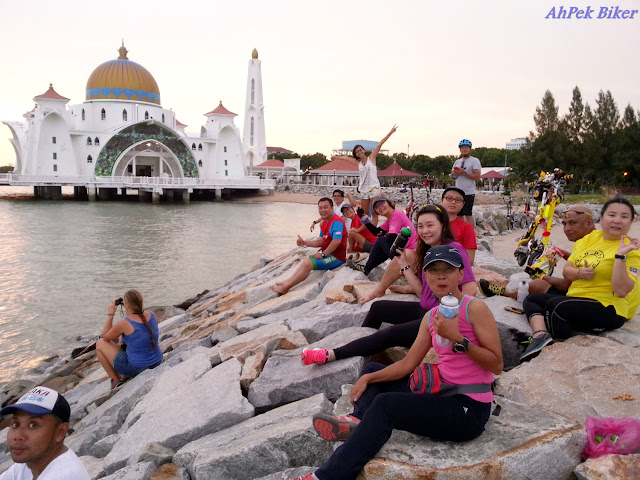 7:00pm - We had cycled the fifteen kilometres back to the city and were now at a rocky shore near the Masjid Selat Melaka. Many other tourists (both local & foreign) were there too; all of us waiting in anticipation. Why?

We were all waiting to view one of the most beautiful sunsets in the world! 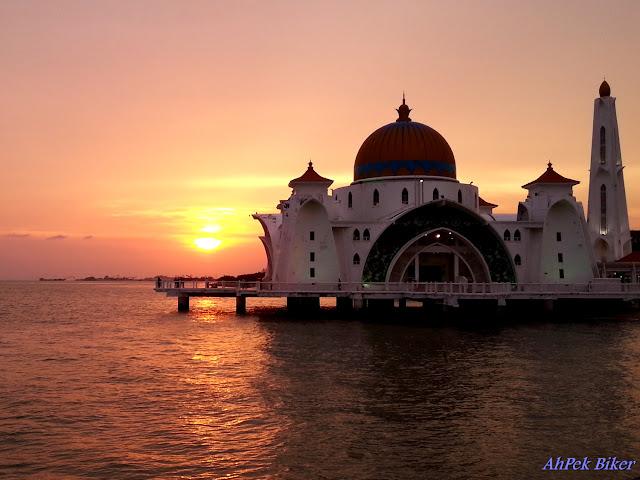 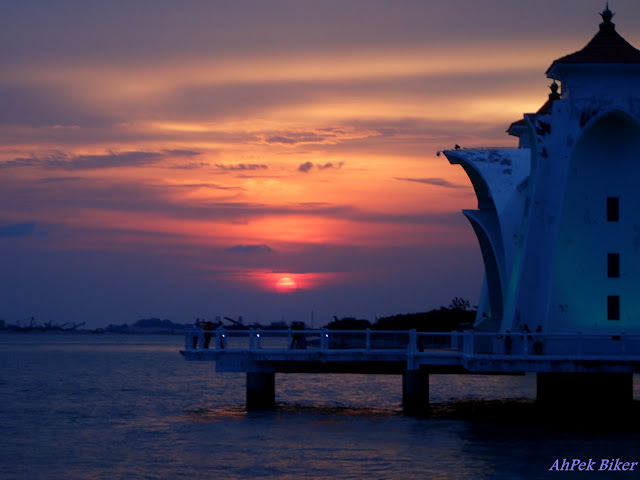 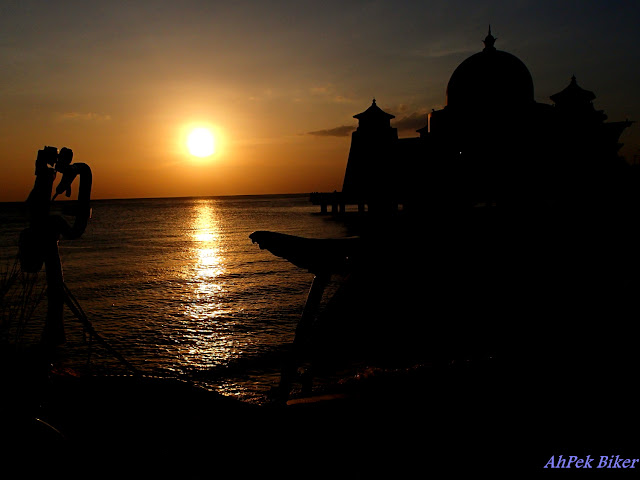 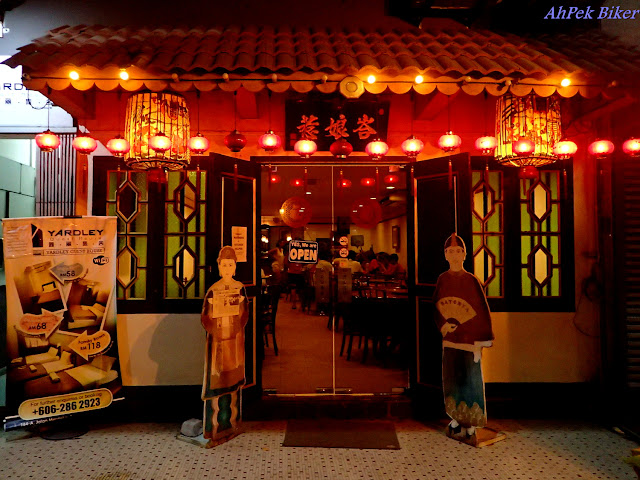 On our way back we were looking for a dinner place and ended up at Bayonya. We were attracted by it's mysteriously red shop front. The food although okay was generally not up to par; we had cincaluk omelet, Ayam Pongteh and steamed assam fish, etc. The omelet did not have enough cincaluk and thus lacked that cincaluk biting flavour. The assam fish was quite good, with the fish being very fresh. 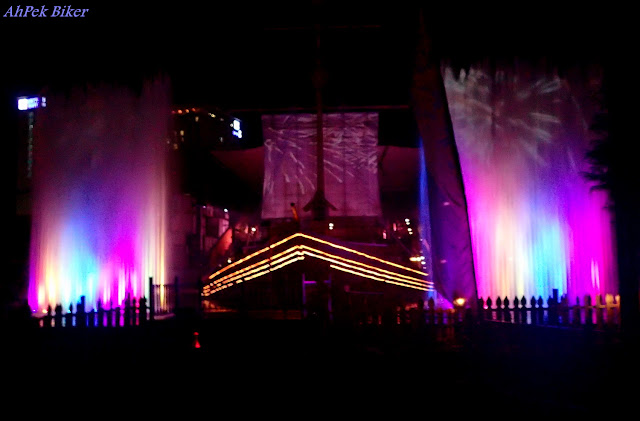 It had been a wonderful day that included a warm Raya celebration, a beautiful sunset and lots of eating
Tomorrow we will return to Sungai Gadut on A Road Less Travelled!
Goodnight.

(To see more photos for the day, Click here)