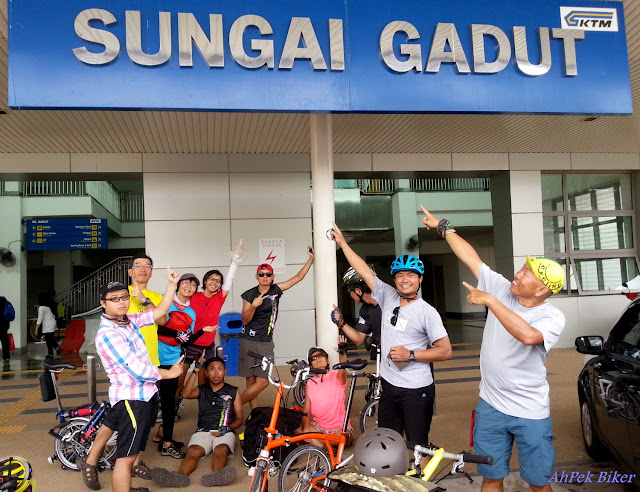 Route Recommendations :
1. The route uses some main roads, although at stretches there may be emergency lanes to cycle on, still do ride with care. It is generally flat.
2. These roads do not over much shade so do cover up and re-hydrate often.
3. We did have a detour passing by some rural roads at Lendu, this turned out to be an interesting detraction as the road were shady. These rural roads had some slopes.
4. As we were on a tight schedule and did not get to visit Interesting places. One place of note that we passed by is Pedas Wet World Hot Spring Resort.

We had cycled down from Seremban to Malacca City a couple of days earlier, and the previous day had some good cycling around Malacca which included  a Hari Raya open house and ended with viewing a beautiful sunset at Masjid Selat Melaka.

THE RIDE
Ride route: Malacca City>Batu Berendam>Krubong>Lendu>Simpang Ampat>Kota>Rembau>Pedas>Sungai Gadut.
Our route today would be one that traverse the interior of Malacca and Negeri Sembilan nearer to the Main Range hills. Running through valleys, it was surprisingly not that hilly. This route is one that is seldom used by cyclists, hence I call it a road less travelled; perhaps it should be a road less cycled as there were definitely much other traffic. 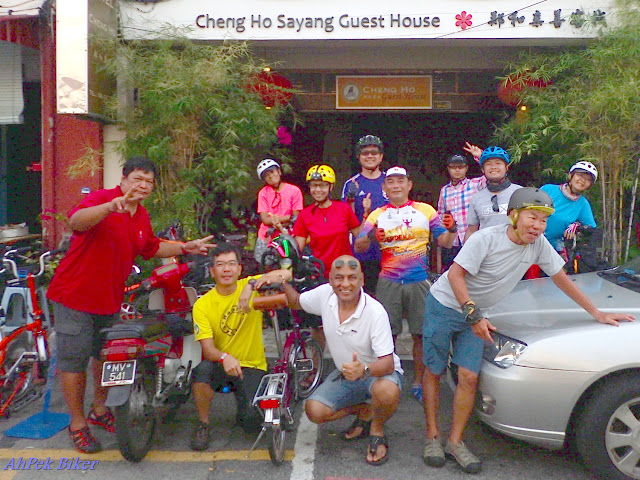 9:30am - With a group photo at the Cheng Ho Sayang Guest House, we are all set to leave, all set to say goodbye to Malacca which had given us some wonderful time these past couple of days. 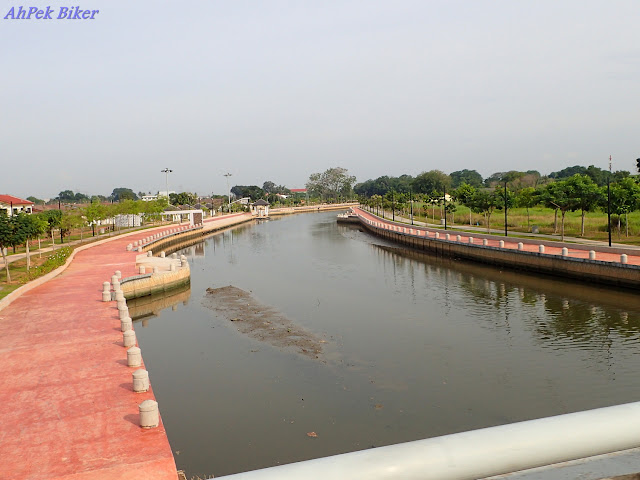 Soon we were at the outskirts of the city, crossing the Malacca River at Jalan Panglima Awang. We noticed that the walkways on the banks of the Malacca River has been extended all the way up here, perhaps the next time we are down here we will try cycling along those walkway and see how far up they have extended. 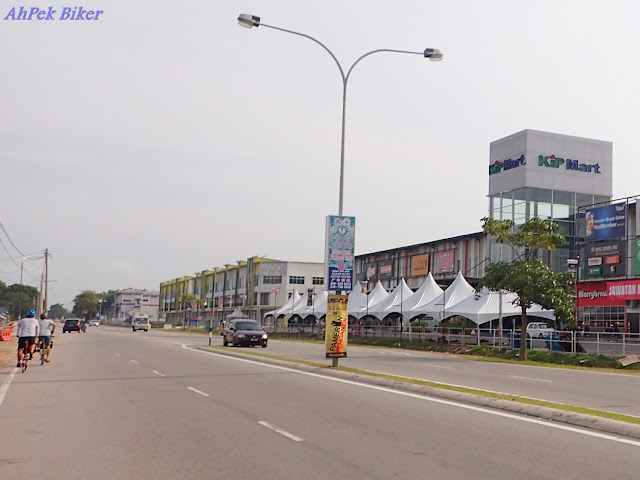 Passing by the KiP Mart hypermarket at Batu Berendam brought back memories. Just about a year back they had sponsored a big group of us cyclist to participate in their opening (... see KiP Mart blog). 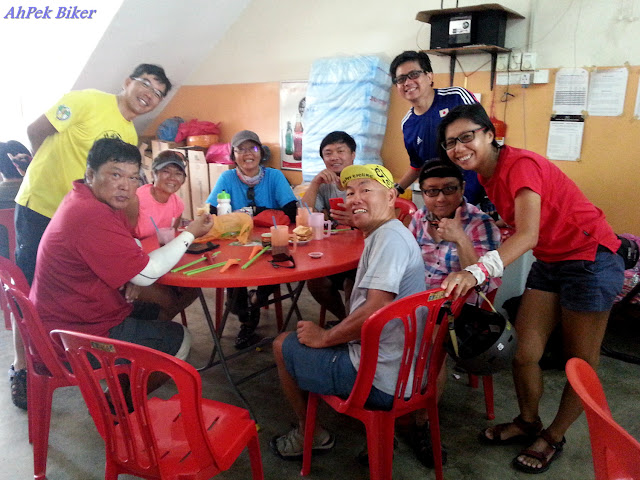 10:30am - Stopped at Kian Huat Coffe-shop at Taman Krubong for drinks. I also had my favourite - toasted bread and two half-boiled eggs. 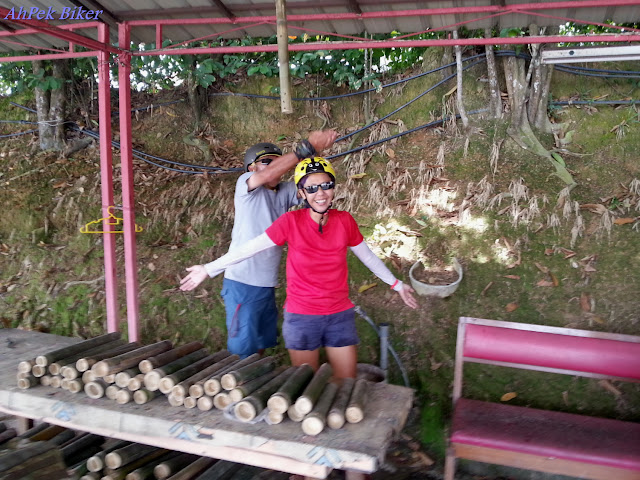 No, Sin was not baptising Anne here; it was getting hot and at one of the regroup points (a lemang road-side stall) there was a convenient tap. We drenched ourselves a much as we could to cool down, sad to say the hot sun dried us out within half an hour later. 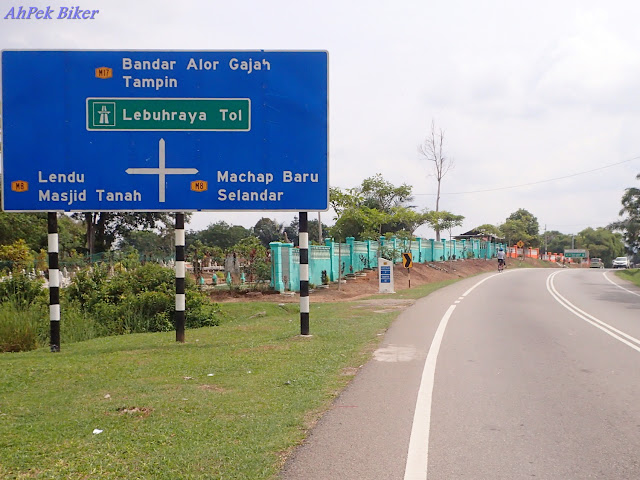 11:15pm - Ahead is the Alor Gajah-Lendu crossroad, an important crossroad for our ride as from there we took an unexpected detour. Sin's GPS unit had given directions for us to make a left turn there. 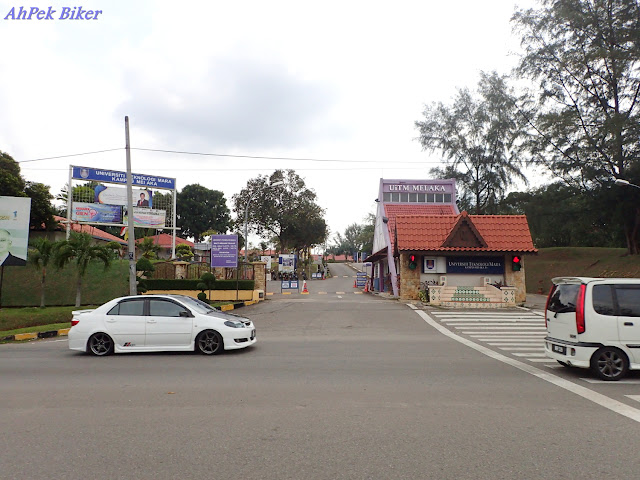 We rode past University Technology Malacca along the Alor Gajah-Masjid Tanah road before we realised we were on the wrong track; instead of making a U-turn back, we decided to make a right turn at Lendu to Route M58. 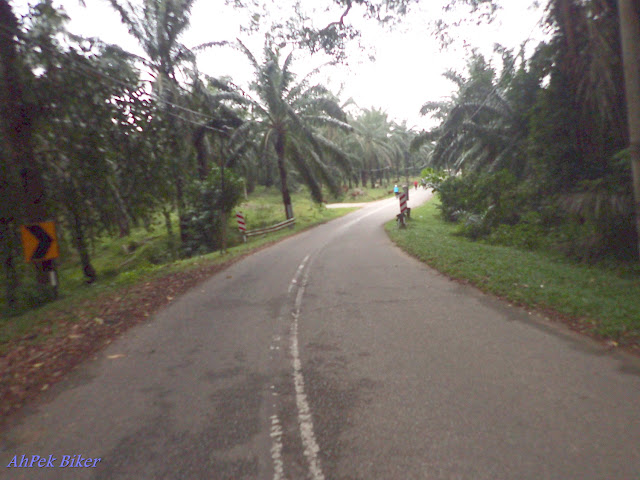 The Lendu road (M58) was a pleasure to cycle on; although narrow it had very light traffic and more importantly it was shady. It took us pass small villages, the names of which we had never heard before. Sometimes, getting lost is a good thing. 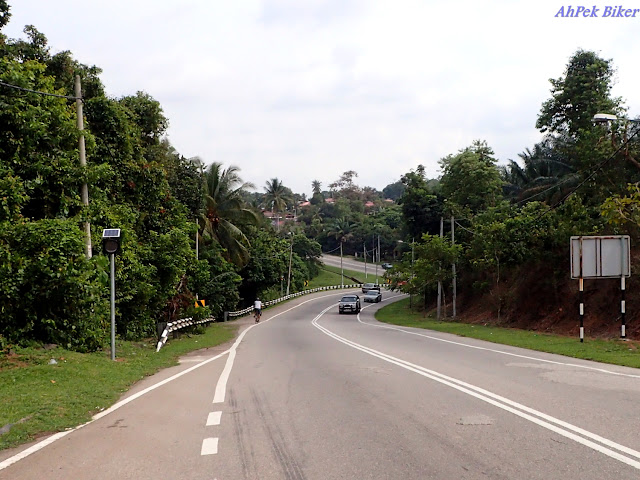 The road also has undulating slope, not steep but enough to give some variation in our cycling pattern. Well, this will be another route we will try out in future.

No, these cyclists are not smelling each others' rears. Rather they were drafting behind each other. This a good method when cycling at areas with strong headwinds, the cyclists at the rear follow closely behind the leader, trailing and fitting into the pocket of the leader's tailwind to avoid the headwind and cycle with more ease. 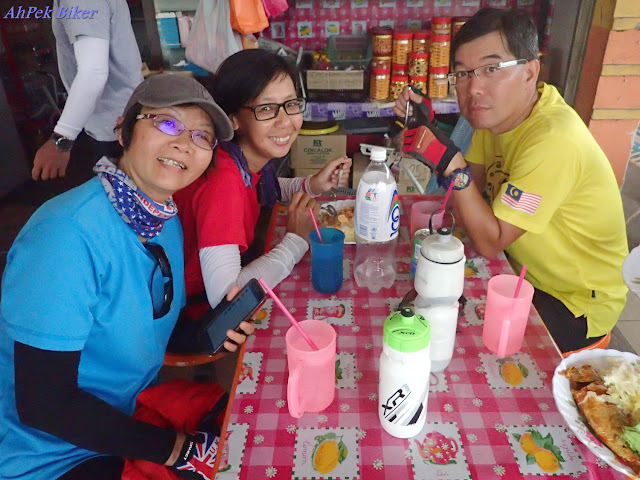 1:15pm - A long stop at the Simpang Ampat Rest & Recreational area for lunch. It was the fourth day of Hari Raya and most of the stalls were opened by then. 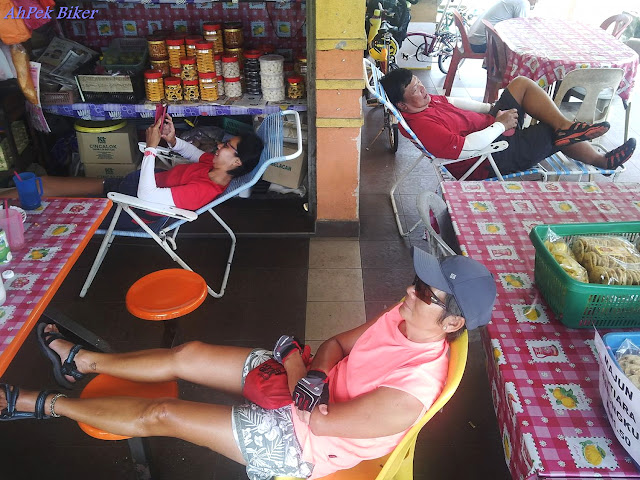 This was a good place to take a short nap. Some of us took advantage of the deck chairs available at this stall, Panda Chew was glad to be able to take five; this was his first bike-packing trip and the first day's tough cycling had taken a toll on him. 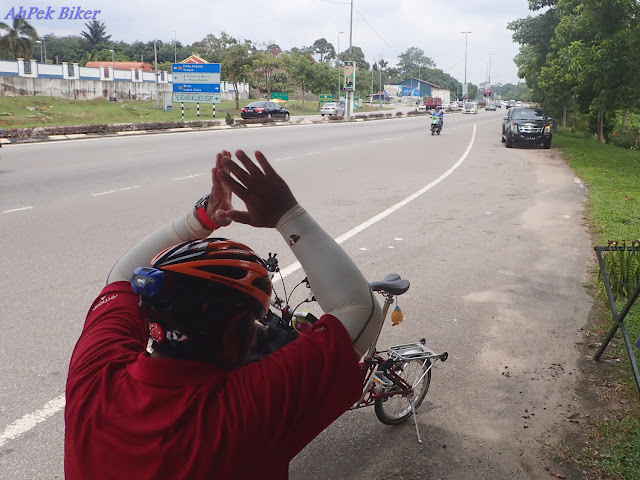 Somewhere after the rest stop, our support truck arrived. Panda Chew was most glad to see it and went down on his knees to bow in thanks; but he decided to stick it out and continue to the finish. In fact none went up the support truck and instead most of us just loaded our luggage into it to lighten our cycling load.
Baki arrived with the truck too, he had went back the previous evening to attend to work this morning. Legs itchy, he rushed down to join us eventhough he did not get much sleep. 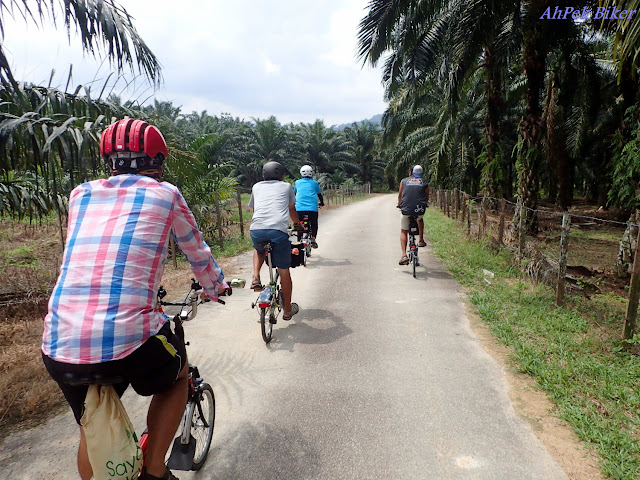 Near Kampung Cerana Putih Brian took us on another detour, one using plantation roads with hardly any traffic. 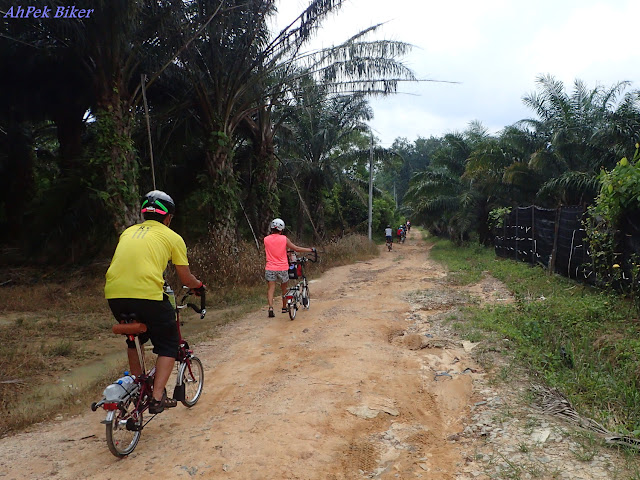 Something unexpected though, a stretch of this plantation road was not tarred and some of us did a bit of off-road cycling while others came down to push.
Somewhere along this stretch, unnoticed we had crossed over the border into Negeri Sembilan.

2:45pm - We are back on the main road, riding along the Seremban-Tampin stretch of  Federal Route 1. Baki is back to his role as our Dǎoyóu (导游 - tour guide in Mandarin); at Kota he took us over the Sin Hiap Chang coffee-shop where they sell bao kampung, one of the unique pau they sell is the petai bao. Most of us had never tried this before but unfortunately missed trying it today, the shop was closed! 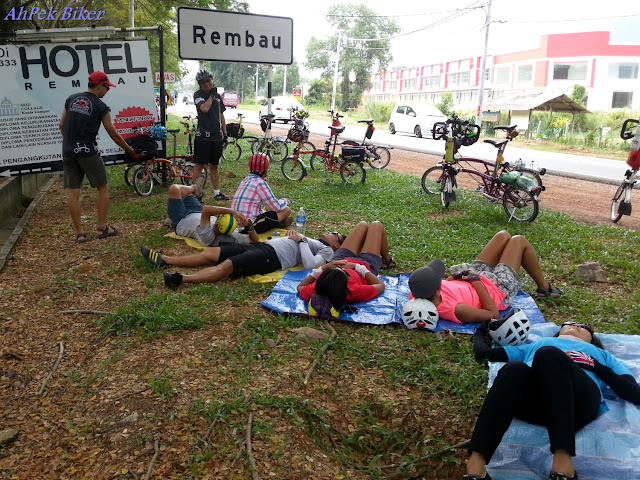 SIESTA AT REMBAU!
The heat has taken its toll on us; at a road-side shady spot near Rembau, we just stopped laid out our raincoats, fly-sheets and took a nap. 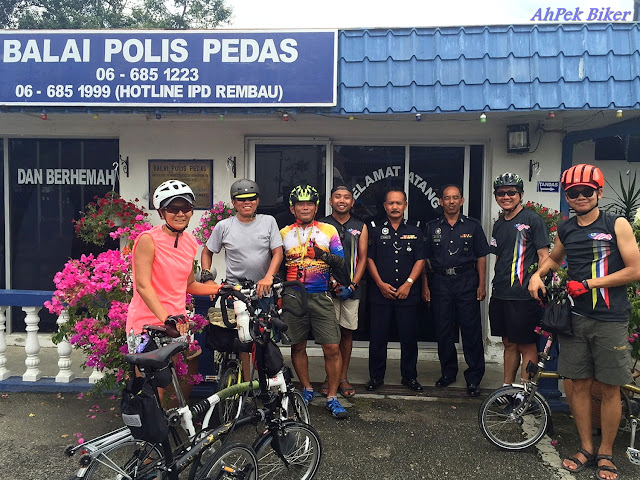 At Pedas, we dropped in to the police station there and the police-men were sporting to take a photo with us. 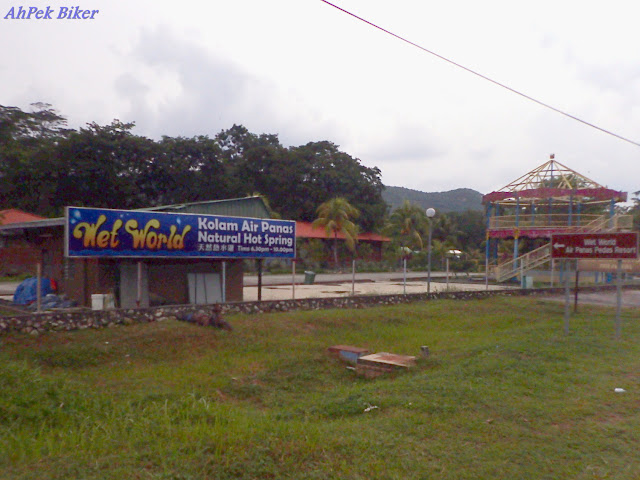 Not to far ahead is the Pedas Wet World Hot Spring Resort. It was under refurbishment/upgrading; another point of interest for future rides. 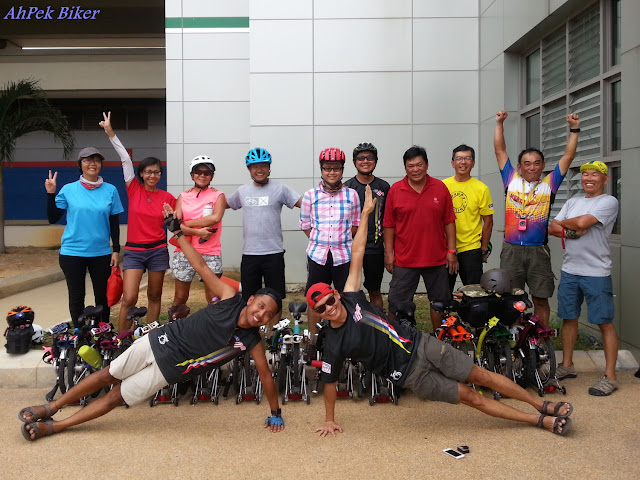 4:45pm- YAHOO! WE MADE IT!
And we did it in seven hours and fifteen minutes, not too bad a time for some of us oldies.
Baki and Jason could even do some acrobatics in celebration! 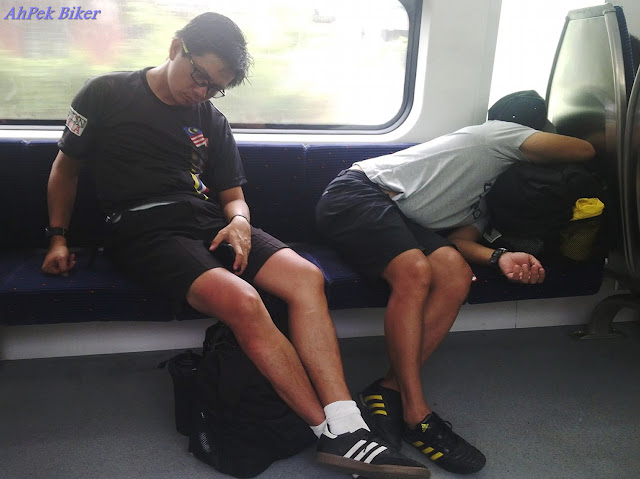 From there it was taking the Commuter Train back to Kuala Lumpur.
The seats may not be comfortable for sleeping, but the air-conditioning made it perfect and most of us snoozed all the way back!

TILL THE NEXT RIDE THEN...

(The next ride will be an interestingly rare one of riding up to Genting Highlands.
Why rare? ... Stay tuned and find out soon)

(To see more photos for the day, Click here)