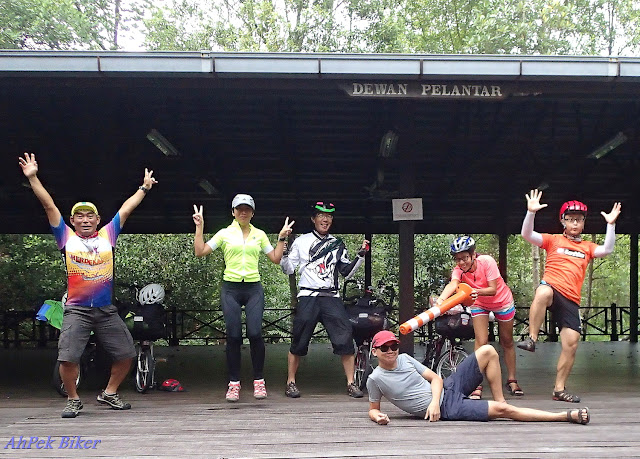 Let's Cycle is Malaysia's 8TV program about two cyclists (Baki & Rickman) taking on Peninsular Malaysia in 2014, cycling around the peninsular within a month. They not just cycled but went on to meet the people at the places that they stopped at, learnt and participated in the distinct local culture. Wherever they went there was always a warm welcome for them, with the locals proud to show them the local culture.
This year, in 2015 8TV is doing another TV program but this time with a unique twist. They have invited three other cyclist to join them in their cycling adventures. These will be senior people whom many may think old but who are young at heart (and perhaps physically they are too). The objective is to demonstrate that older people can take on tough physical tasks like cycling and at the same time enjoy life even in their later years. The three who will join them are Uncle Lim (a septuagenarian); and my friends Sin (of the hApPy HaPpY blogs) and Fenn, both of whom are in their late fifties.
Together they will cycle from Kuala Lumpur to Penang Island in a week. Along the way they will pass the night at Kuala Kubu Baru, Bidor, Ipoh, Sauk, Kuala Sepetang, Bukit Mertajam. Their route will take them pass towns and villages where there will get to see and experience the distinctiveness of each place and their people. What an adventure it will be for them!

PRELUDE
Some of us had thought of joining our TV friends (to give them some moral support) along part of their journey. The previous day we had by train & bus gone up to Taiping and then cycled to intercept them at Simpang. We spent the night at Kuala Sepetang and today were looking forward to more cycling, a serious route from Kuala Sepetang to Butterworth.
It was suppose to be a manageable ninety kilometres ride, but in the end we took a detour to Kuala Kurau to savour their renown Cucur Udang (prawn fritters) that added thirty kilometres to our ride distance. We must have been crazy to cycle thirty kilometres for those prawn fritters..... but then they were exceptionally good!
Yup! We are crazy! Cycling crazy & food crazy!

THE RIDE
Ride route: Kuala Sepetang>Selinsing>Kuala Kurau>Tanjong Piandang>Sungai Udang>Nibong Tebal>Valdor>Butterworth
For the most part we would be cycling along quite rural roads (from Selinsing to Nibong Tebal). Other than that we used the old trunk road (Federal Route 1).

Route Recommendations :
1. The route is relatively flat.
2. Except for certain stretches along the rural roads, the route has hardly any shade, so do cover up or apply sun-block.
3. Federal Route 1 is a main trunk road with heavy traffic, do cycle with more care there.
4. Kuala Sepetang is a fishing village with many interesting things to view and food to eat:
- Don't miss the bridge of Sungai Reba, from its mid-span there is the best of trawler boats parked at the riverside.
- The Mangrove Swamp Forest Reserve is one that preserves the pristine nature of the swamp. There are even chalets there to stay in but do look out for mosquitoes; they could also improve on security.
- The are several charcoal factories nearby, do pop in and see how they make the charcoal the traditional way.
5. The are nice spots and foodie places along the route, some of which are:
- The prawn fritters and coffee at Bagan Seberang, Kuala Kurau.
- Nice prawn curry at Nibong Tebal, it goes well with bread.
- Nibong Tebal has some dedicated cycling lanes, if time permits, do visit it.
- In the Butterworth Raja Uda area are many food courts serving good Penang Hawker food. 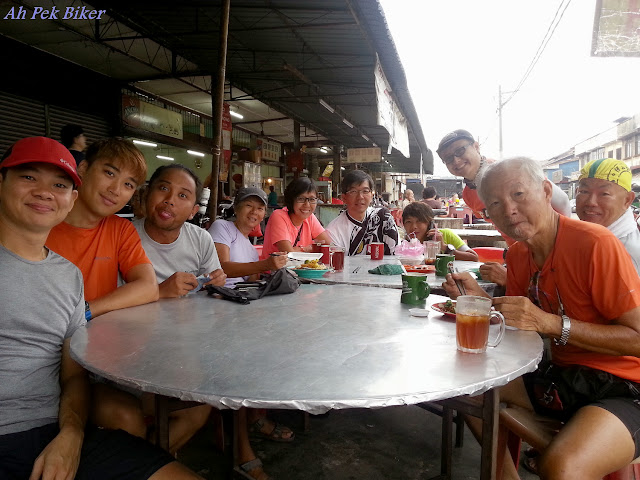 It's a good morning at Kuala Sepetang, we met up with our TV friends at Seah Yuan coffee-shop and had a quick breakfast. They and the shooting crew had to to some filming at the area, so the rest of us decided to ride on ahead first. 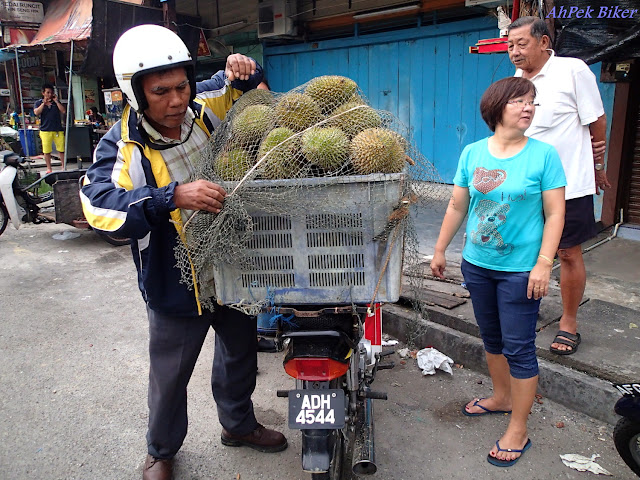 On the other side of the road, a durian seller on a motorcycle just arrived. Even before he had time to unpack people were coming to queue for this King of Fruits. Such is the Malaysian passion for this fruit. 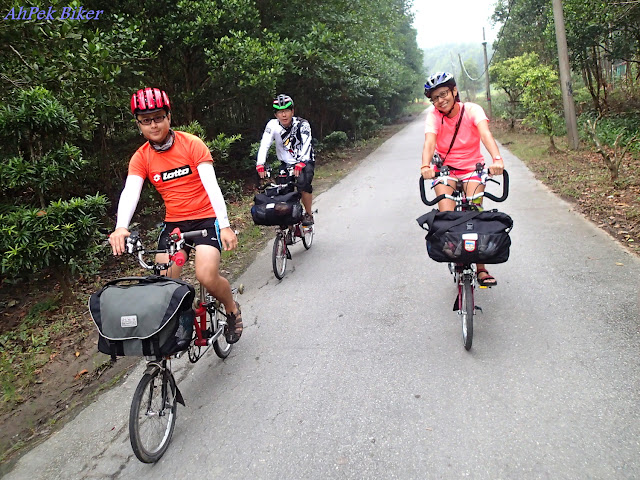 We rode over to the chalets at the Mangrove Swamp Forest Reserve to collect some of the things we left there (helmets, etc) praying that they were still there on account of the theft there the previous evening.
In the early morning, this place is a pleasure to cycle along, cool and surrounded by lush greenery. 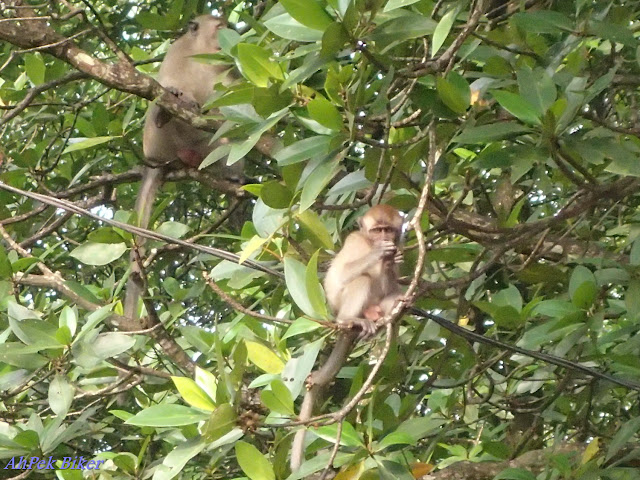 While we were busy enjoying the greenery and the animals here; they too were observing us. This little monkey must be thinking to itself, "What's those humans doing, with those odd contraptions with tiny wheels.... Hmmm..... just let them be.... Hey! There's a nice juicy fruit at the other branch... now that's something more interesting!"

Done with getting our stuff from the chalets (Yup, lucky us... they were still there) we rode over to the charcoal kilns on the opposite side of the road. Most of us had visited the kilns before, but Kong had not, we left him to wander around a bit , to view the dome kilns where charcoal is still manufactured the old traditional way. Meanwhile there rest of us went back to the main road and waited at a nearby bus stop shelter for our TV friends to come by. 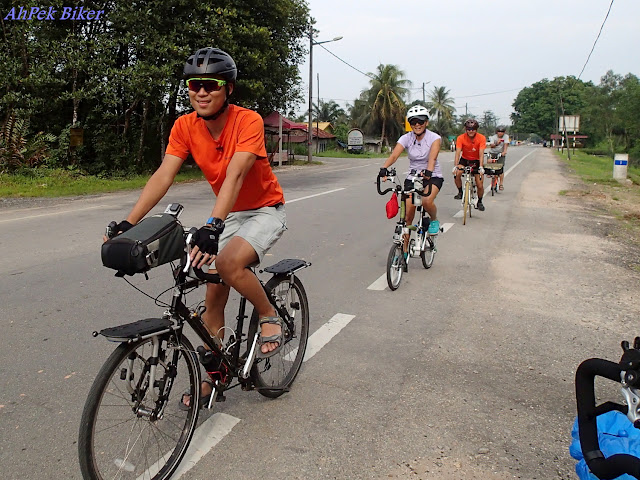 9:55am - Soon they came riding by, still looking fresh and smart even after days of cycling in the hot sun. I wonder what's their secret for this? Did they use better after-shave cologne, or were they eating better and having first class accommodations? No, they ate what we ate, and they just stayed in home-stay accommodations just like us; nothing fanciful. I guess it must be because they were enjoying themselves, viewing the country at a cycling pace. Yes, having fun does make one looks brighter and more cheerful. 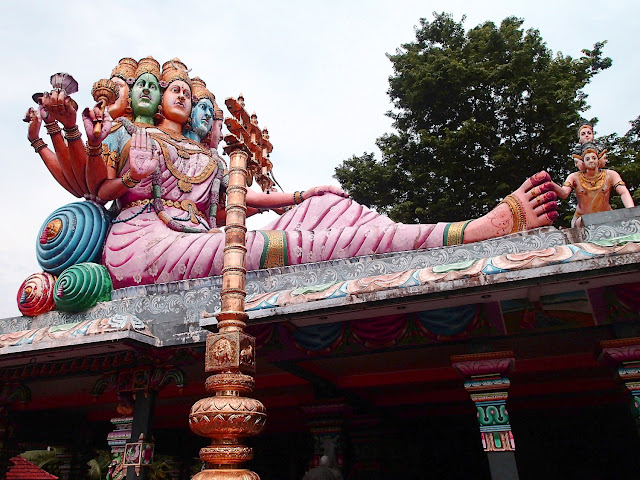 At Om Sakthi Sivanantha Arulantha Muneeswarar Temple, under the watchful eyes of the temple gods, we made a left turn onto the main trunk road, Federal Route 1, to head towards Butterworth. 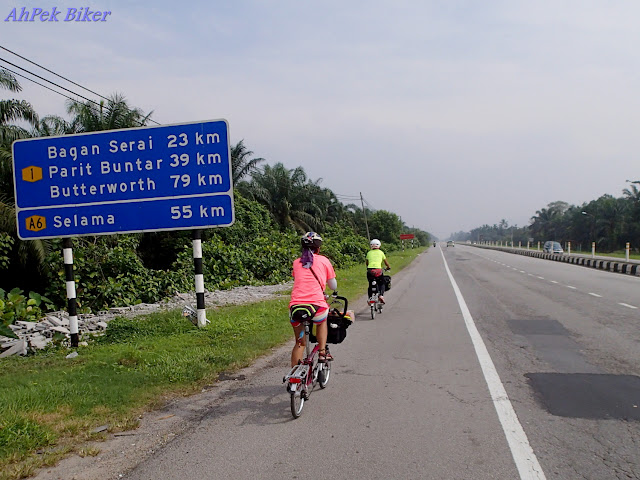 The trunk road was busy with traffic and there were not much shade to protect us; let's hope the Indian gods will look over us and keep us safe from the heavy traffic. On some stretches of the trunk road, there were wide shoulder lanes for us to cycle on, on others there were hardly any. Whichever the case is we did cycle with care, left our rear blinkers on and listening out for traffic that came whooshing up behind us.
Kuala Sepetang is about ten kilometres behind us, and the signboard is telling us that Butterworth is another eighty kilometres away, making it a total of ninety kilometres; well that's manageable even under the hot sun.... that is until... we got word that the filming crew will be granting Fenn's wishes and would taking a detour to Kuala Kurau to savour the famous Cucur Udang (prawn fritters) there. Previously during a Parit Buntar cycling trip we had had eaten those prawn fritters, and most of us were looking forward to trying them again - so it was not only Fenn's wish that was granted, it was also ours.
This detour would add another thirty kilometres to our route, but the thought of those fritters and also the bonus nice frothy coffee that comes with them were just too tempting to be missed. 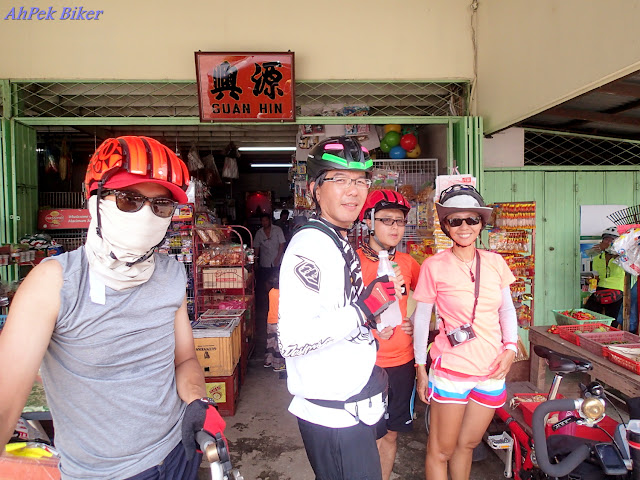 11:00am - Our TV friends were behind us, so which route should we take to head for Kuala Kurau?
Fortunately, Kim's GPS laid out a route for us that would turn off from the trunk road at Selinsing. But first thing first, it was getting hot and my friends had started covering up. We stopped at sundry shop at the Selinsing junction to rehydrate with bottles of badly needed cold 100+ isotonic drinks in preparation of the hot ride ahead. 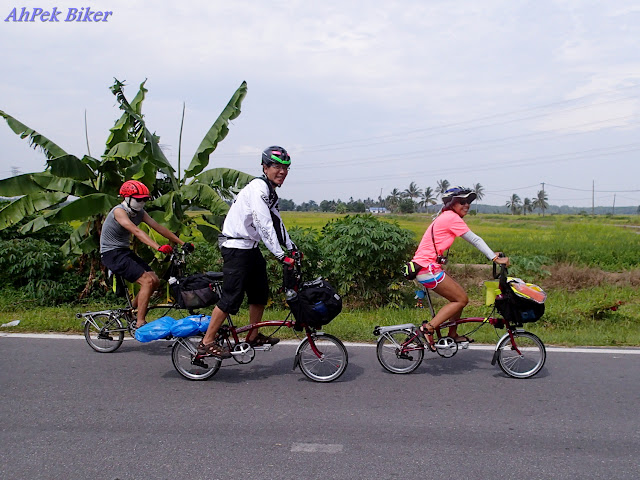 The detour was a blessing, instead of the heavily trafficked trunk road we are now riding through the rustic roads passing through the paddy belt of the Kerian region. It was a welcomed change of scenery, with so much green all around us. 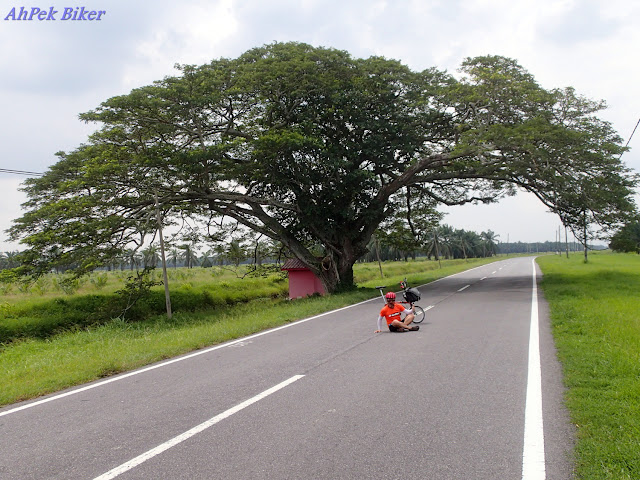 The road was without much traffic, in fact it was so quiet that Kong could afford to sit on the middle of the road to pose for a nice photo below a picturesque rain tree. 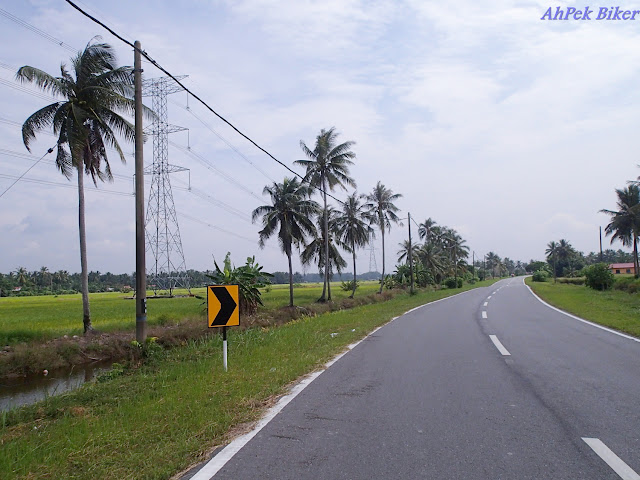 Ahead we reached Jalan Gula and made a left turn for Kuala Kurau, left would have led us back to the main trunk road at Simpang Ampat Semmangol. Though it was a hot day, the roads here are definitely a pleasure ride on with coconut trees swaying above the light green paddy fields. This road also led to the Kuala Gula Bird Sanctuary, but we were on a roll and had to give that place a miss again.

1:00pm - We reached Bagan Seberang, Kuala Kurau; just timely for lunch.
It was a good timing, as our TV friends had also reached this place; they had taken a different route coming in via Bagan Serai and cutting through Kuala Kurau town. Although we had been here before (... see Parit Buntar Fishing Villages Ride Day 2 blog), finding the prawn fritter shop was not easy. We had to ask around. A kind local led us on a motorcycle through the Bagan Seberang village and took a right turn in between some non-descript houses that led to the Chinese temple where the Lee Kean Seng coffee shop is.
By coincidence, cyclists from the BM Night Rider Group had rode from Bukit Mertajam to Kuala Kurau and had arrived at about the same time. It was a splendid meeting of cyclists, with them excited to meet Baki and Rickman.

Okay..... I better show you some photos of the food, or else you all would be wondering what the fuss was all about: 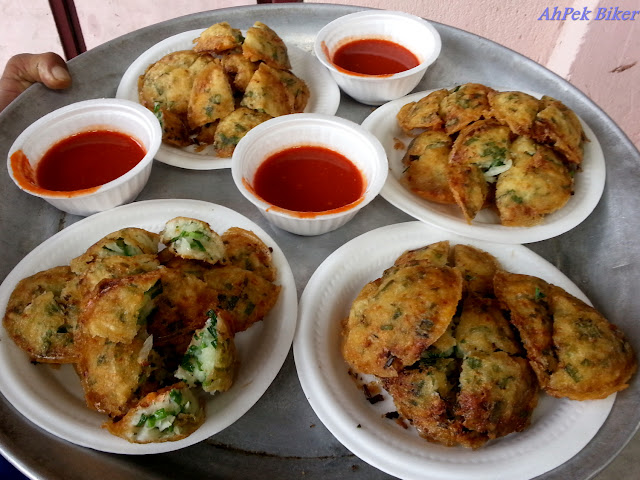 These are the Cucur Udang (prawn fritters). It's a tart made by deep frying a batter mix of grated turnip, chives and shrimps. The secret here is that they freshly grate the turnips and chives and immediately fry the batter mix together with the fresh shrimps. The fritters are served hot from the wok. The result is a bitey tart with a layer of crispy skin, and with crunchy fresh vegetables and shrimps inside. 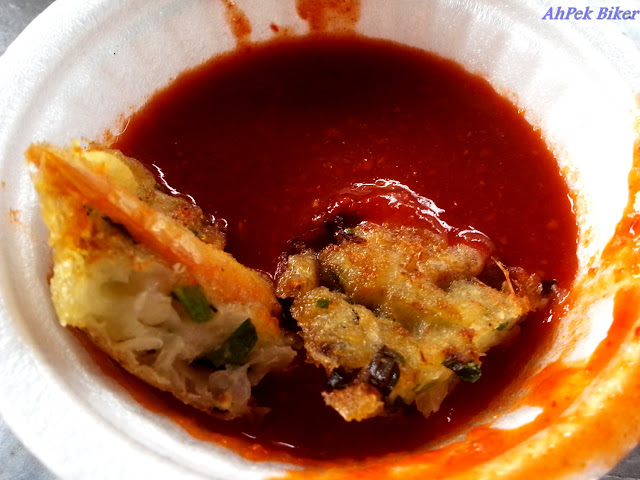 It is eaten dipped into the slightly sweet locally prepared chilli sauce.
YummY! 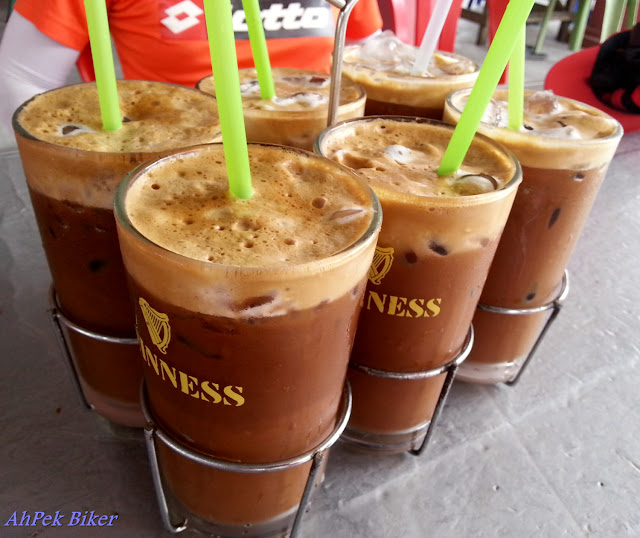 The iced coffee served here is special too, thick Arabica topped up with a nice froth. It had a strong earthy taste that is complemented by creaminess of evaporated milk.
YummY too! 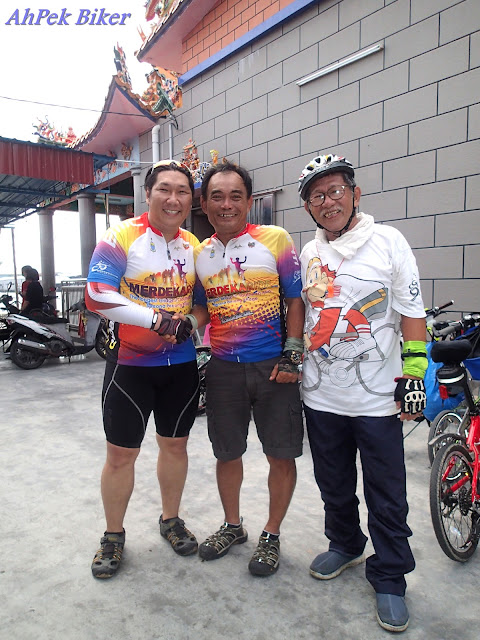 It was a time for some reunion too, time to meet up again with another Ah Pek. Here's Gary & Tim with me at the temple nearby. I had first met them while riding up to the Hakka Village in Balik Pulau, Penang. On and off we had managed to ride together, but it had been a while.
Gary is a jovial and determined man, despite his age he had cycled 55 km. all the way from Bukit Mertajam to Kuala Kurau.
Here too, I met up with a couple of people for the first time. First was, Jackson the leader of the BM Night Riders. Second was Chris Lee, an avid cyclist who had kept in touch with me in Facebook. 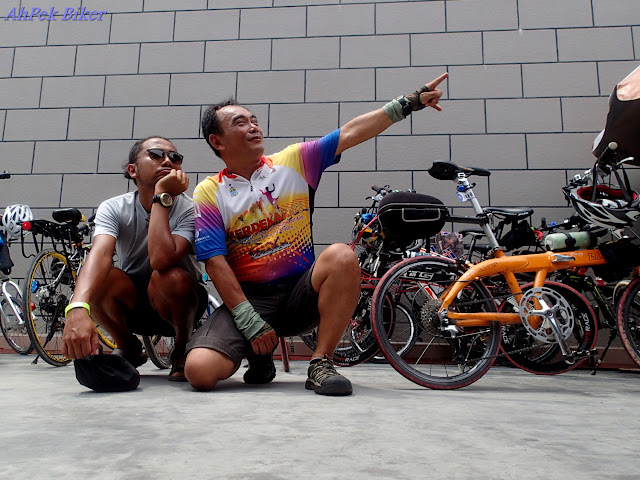 Took an opportunity to pose with Baki...
Hmm.... he seemed a bit bored by what I had to show him. No, he's just play-acting. He's actually a very humble person, courteous to all he meet especially older people like me.

Well... time to leave this place and head for more adventures up north.

This blog comes in a several parts. To go to other parts click on the following link to return to the summary page:
- Let's Cycle 2015.