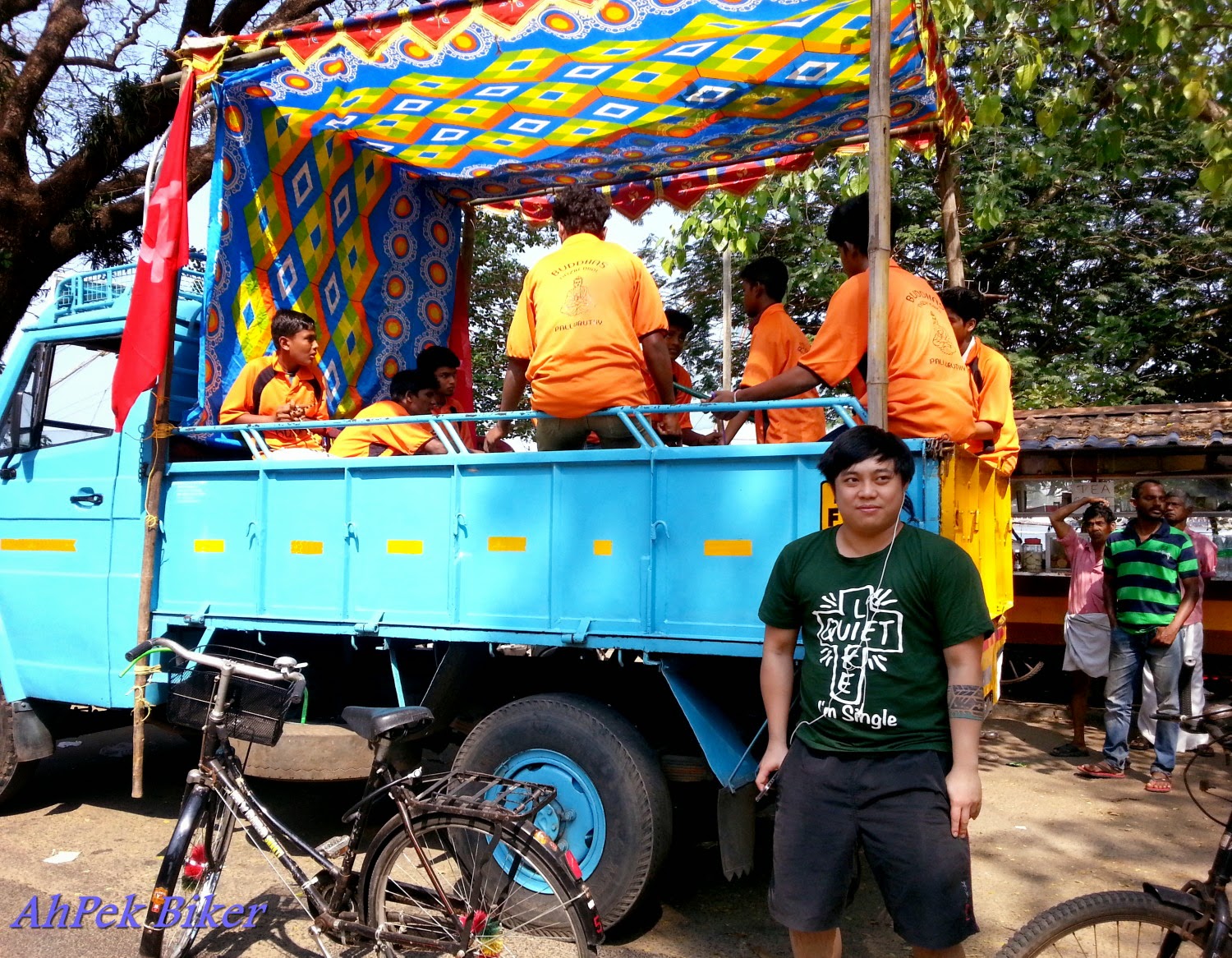 Route Recommendations :
1. Traffic is heavy along the some narrow stretches especially near the docks godown area. The main roads are also busy with traffic. Use the quieter secondary roads when possible and above all do ride with care.
2. Within the heritage area of Fort Kochi are many sites worth visiting such as:
- The Chinese Finishing Nets,
- The St.Francis Church,
- The Santa Cruz Cathedral Basilica,
- The Mattancherry Palace, etc.
Entry fee may be required for some of these places.
4. There are good eats in Fort Kochi, don't miss the seafood which are very fresh here. The food court at Tower Road has many stalls offering good Kerala Food. If not up for spicy food, many shops serve non-Indian European food (generally referred to as Continental Food); amongst them are Kerala Cafe, Oceanos Restaurant & Dal Roti.
5. It will be good to track cycling routes using apps such as Map My Ride. If overseas and without any mobile data line, start tracking from the hotel where there is WiFi. The WiFi will allow maps to be downloaded onto the tracking apps. Without the maps one will only see a red tracking line. If lost, the maps will be useful to get one's direction right again. 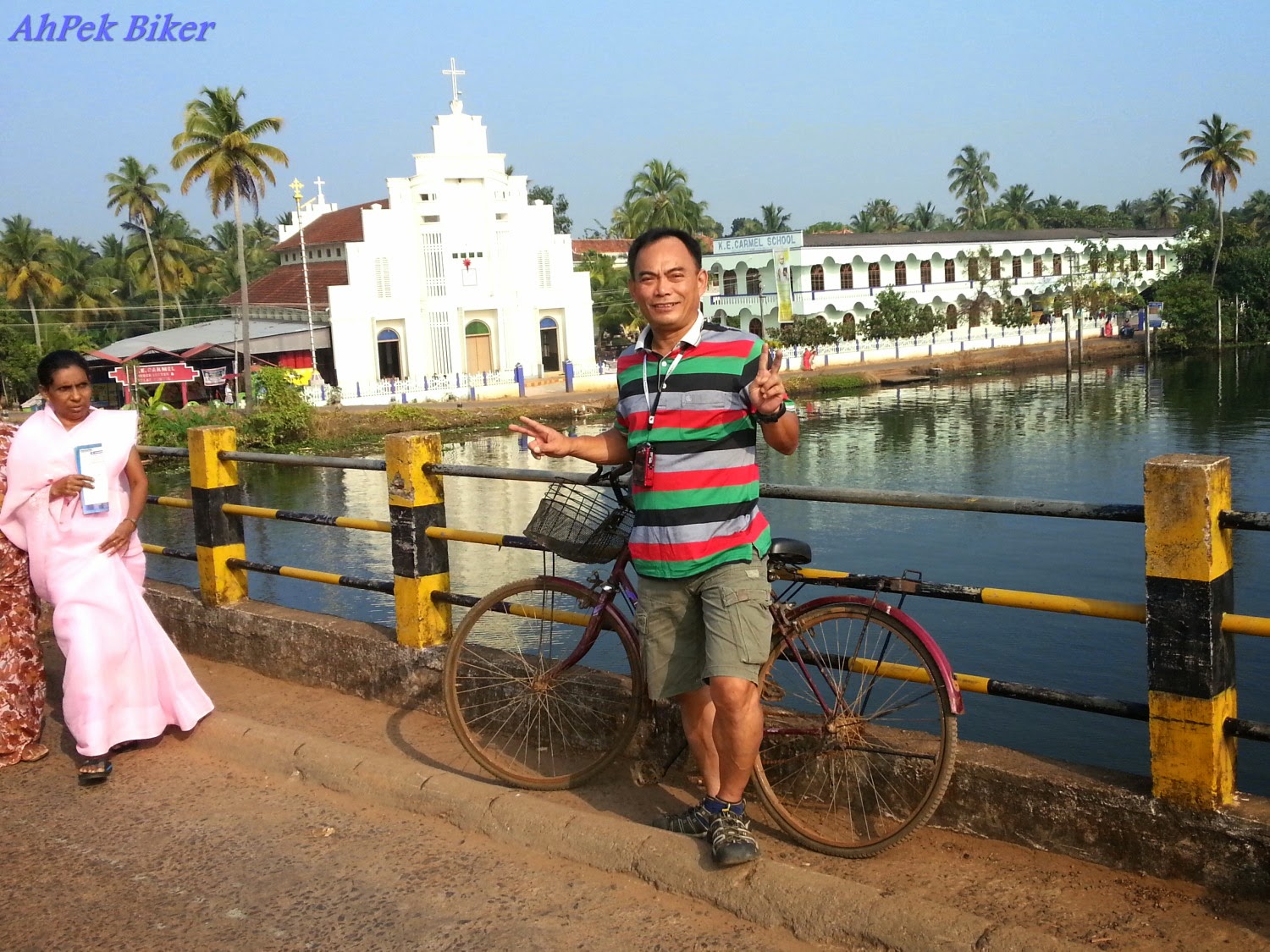 We were on a holiday in Kerala, India. The previous day I was desperate to cycle and had borrowed a poor young boy's rusty bicycle to cycle around the backwaters of the Allepey riverside. It was a short cycling stint that gave me an opportunity to view rural life in Kerala and should have soothed my cycling itch for a while.
But it was not to be, one day later the itch came back when we reached Fort Kochi. Unlike the rural backwaqers, Fort Kochi is a vibrant heritage centre and old port busy with acitivities.
My itch came back! I have to ride again, to experience the difference of cycling in a busy metropolitan area.

Ride route : Chiramel Homestay>Chinese Finishing Nets>Fort Kochi Ferry Station>Jewish Cemetery>Masjid Ansar Rd>Chiramel Homestay.
Distance: 11.67km.     |     Level: Easy
So my son and me rented a couple of bicycles from a nearby bike rental. The rental rate per bicycle per day is 100 rupees. We were going to ride only for a couple of hours and negotiated the rate down to 50 rupees. I must add that if renting bicycles here, check the bicycles first as some of the brakes don't work well.
With only a destination in mind, we will be riding lost, i.e. without any particular route in mind and let the road lead us along. Our destination was the colourful fishing boat boats at the harbour near the old Thoppumpady Bridge. 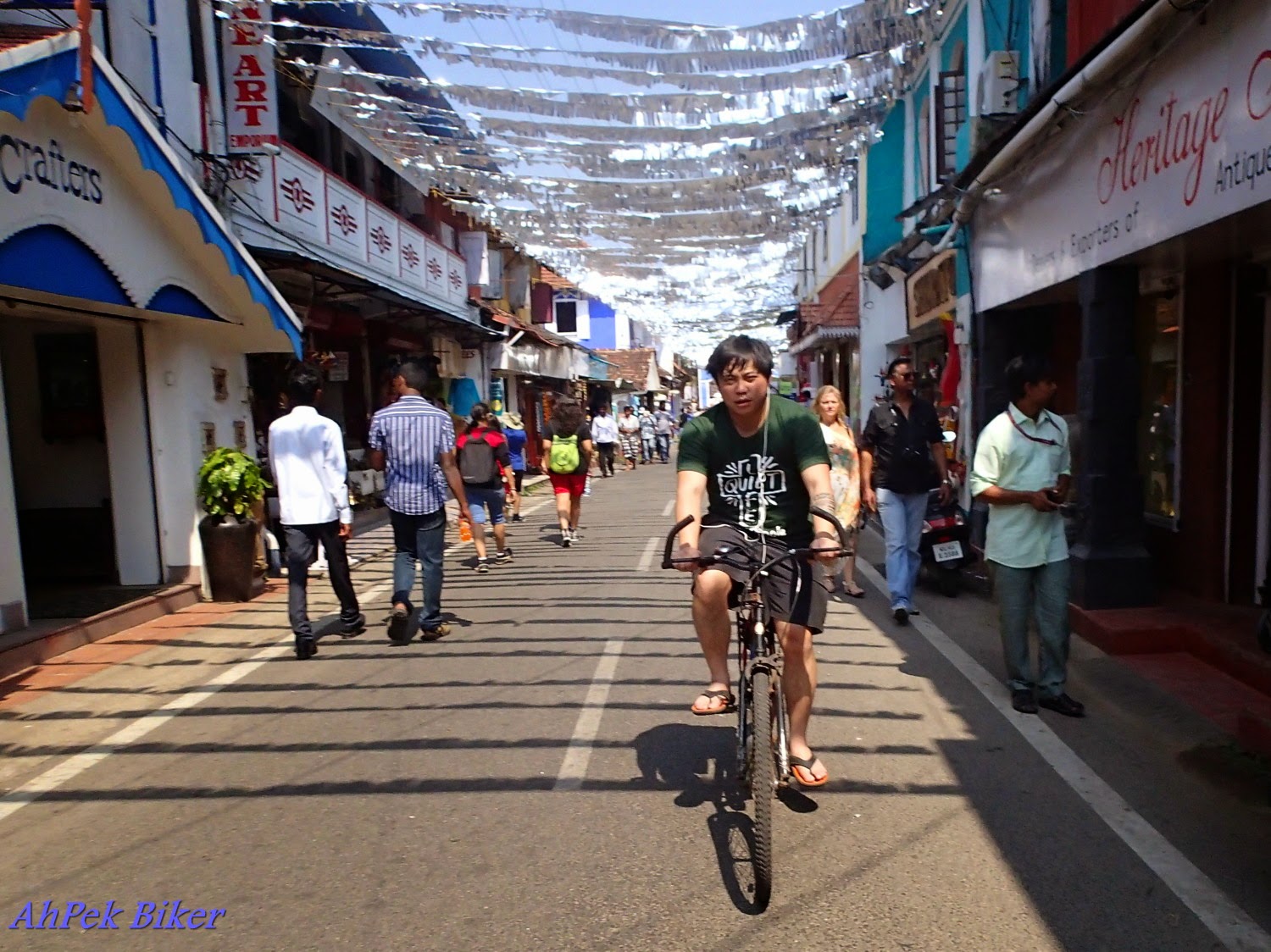 We took hold of the bikes and bearing in mind that their conditions were not tip-top, cycled slowly in a northwards direction and then hopefully loop down along the eastern coast.
Photo above shows Keve riding by the Princess Street area, where there are may shops selling Indian antiques and souvenirs. Hanging from above silver strip banners were fluttering with the wind, making some natural music tempo, putting us into a festive mood as we cycled along. 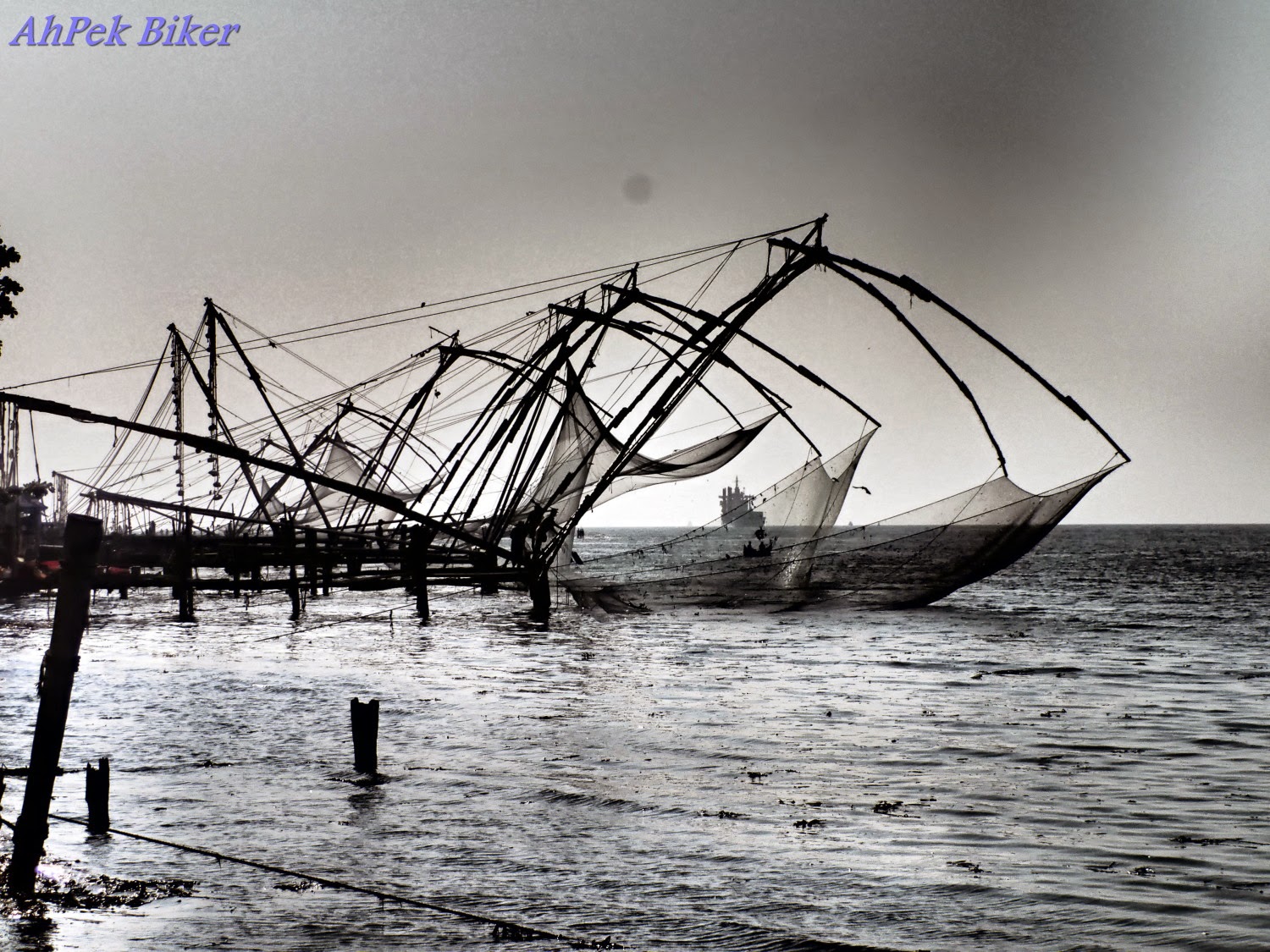 Near Vasco Da Gama Square are these huge Chinese Finishing Nets. Each of them were about ten metres wide by twenty metres wide and needing at least ten fishermen to operate one. This net design is reputed to be of Chinese origin, possibly handed down from the time when Admiral Zheng He passed by here during his travels from China.
The fishermen lower the nets into the sea for half an hour before raising them up again, hoping to net as many fish as possible. But these days the catch seems to be paltry, drawing in only a few fishes which are quickly stolen by the sea gulls as the nets come out of the water.
The nets did not draw much fish but did draw these two cyclists to stop for a while to admire their lithe structure and talk to the fishermen. 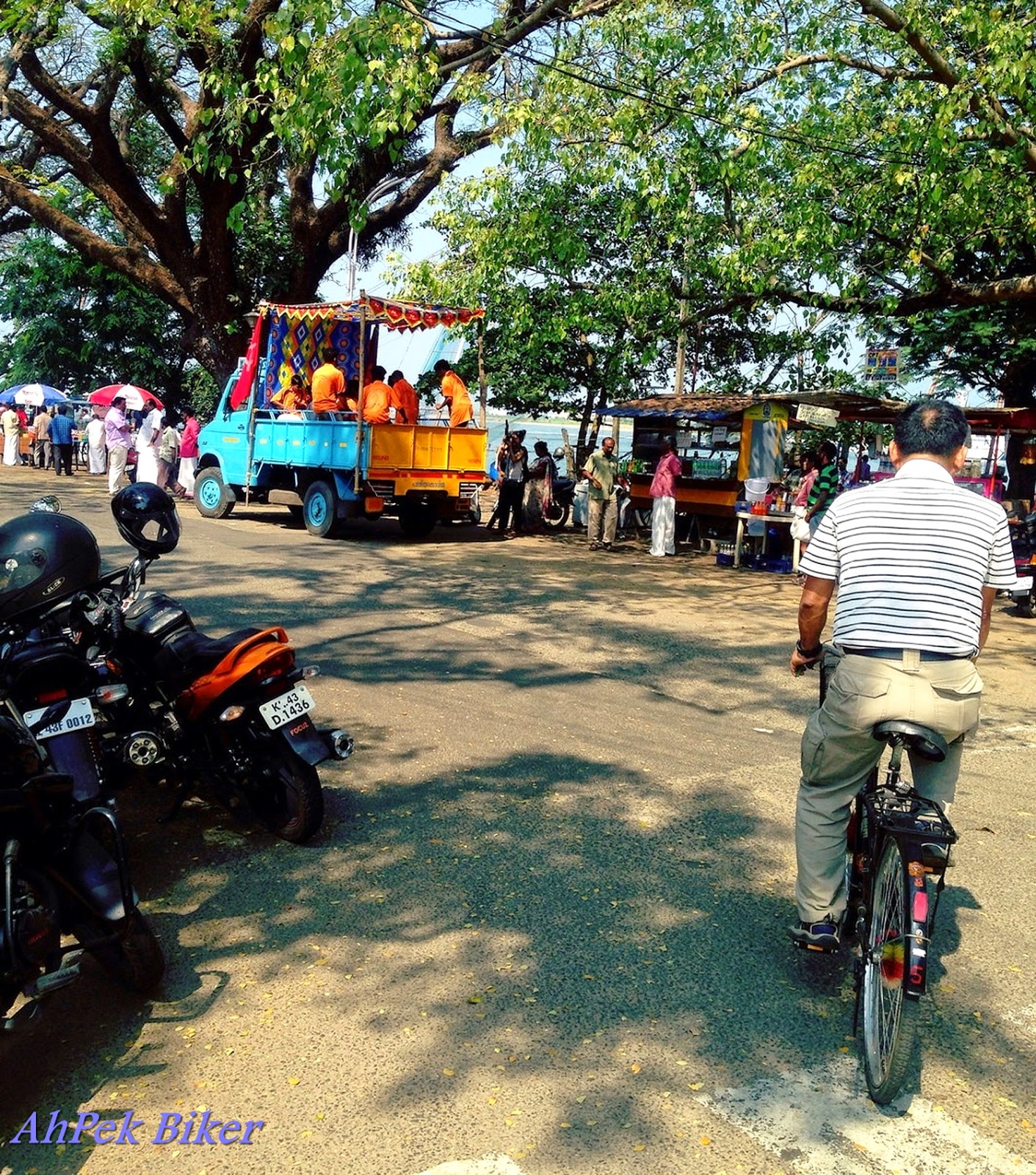 Happy with the view of the nets, we continued on along KB Jacob Road when suddenly the sound of music and singing attracted us back to River Road. 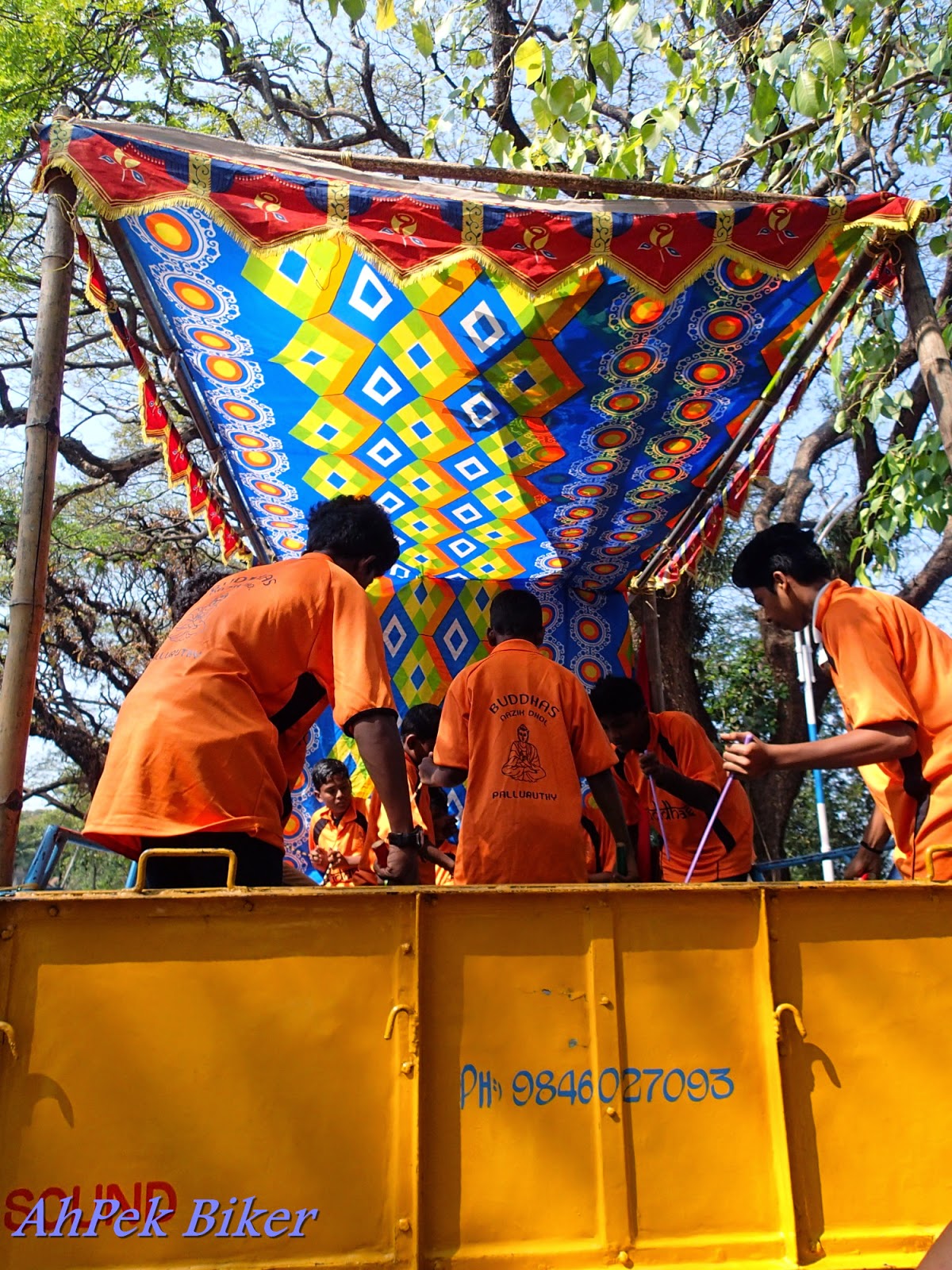 The music was coming from a yellow truck carrying some locals (perhaps some association members); in tempo to their drum beats they were also singing.
I love India; the people and places are so colourful, some may find the colours loud but I find that it gives India its distinct identity, like these singers above ... 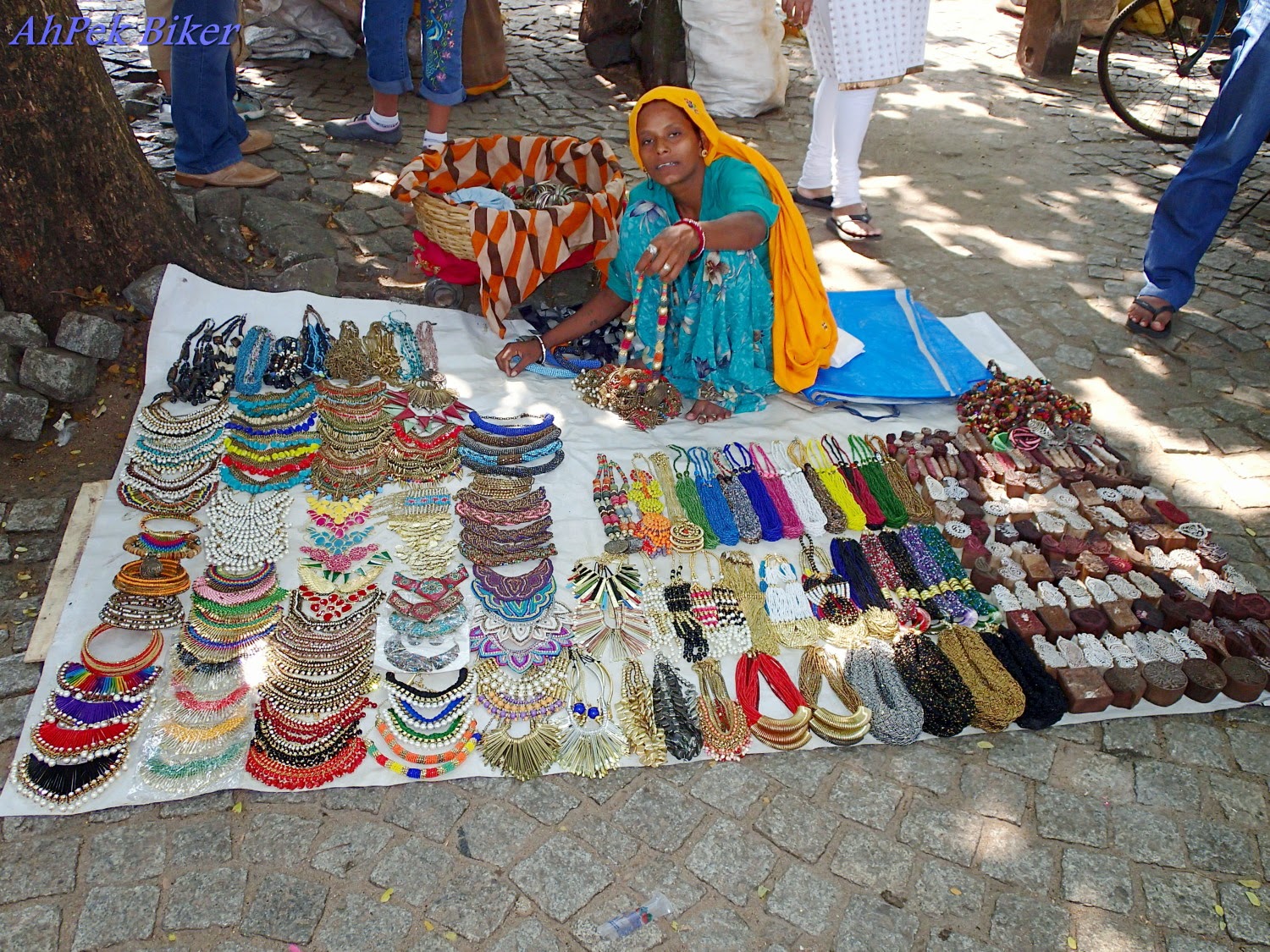 ... and this Indian lady in a blue gown and a bright orange shawl selling very colourful necklaces... 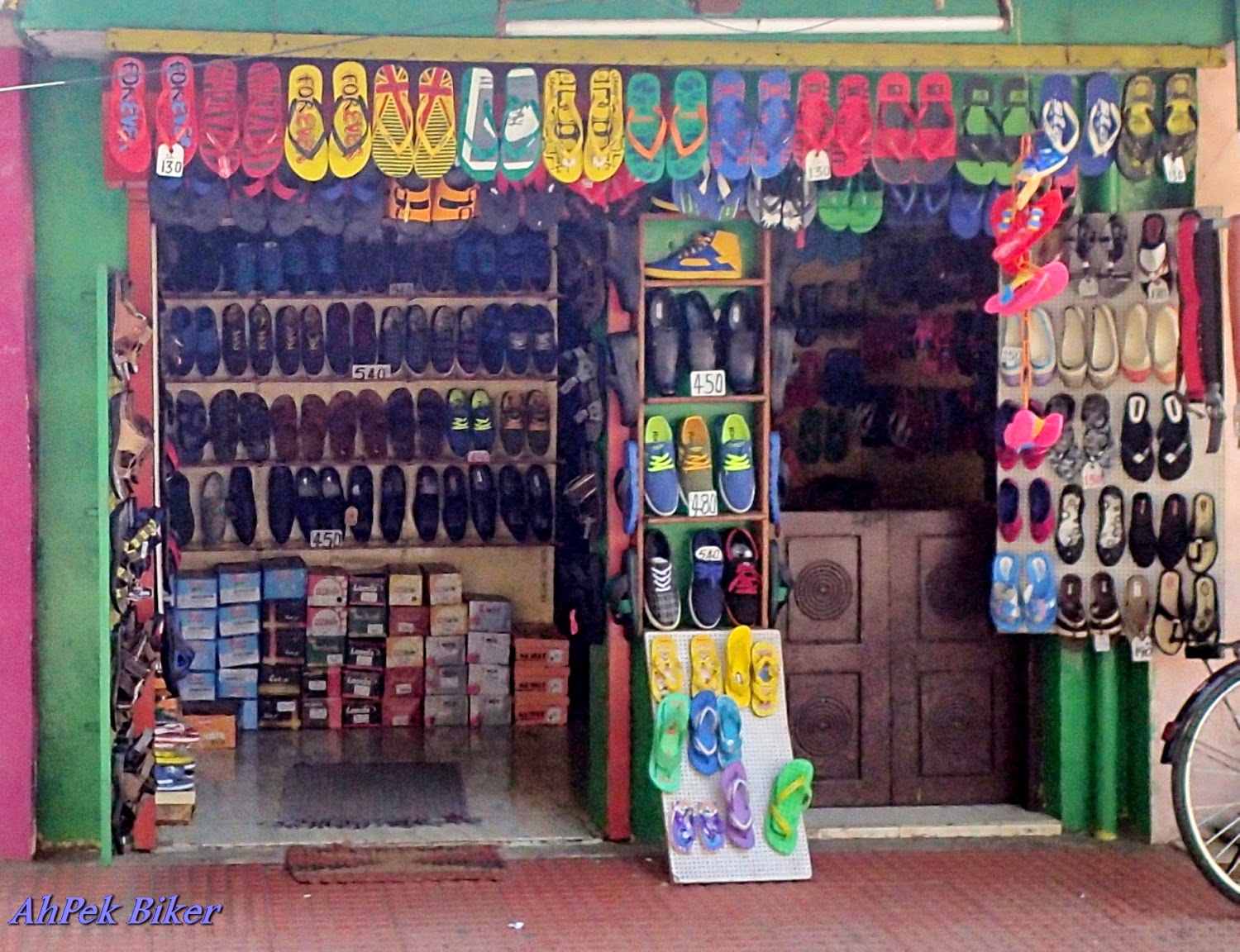 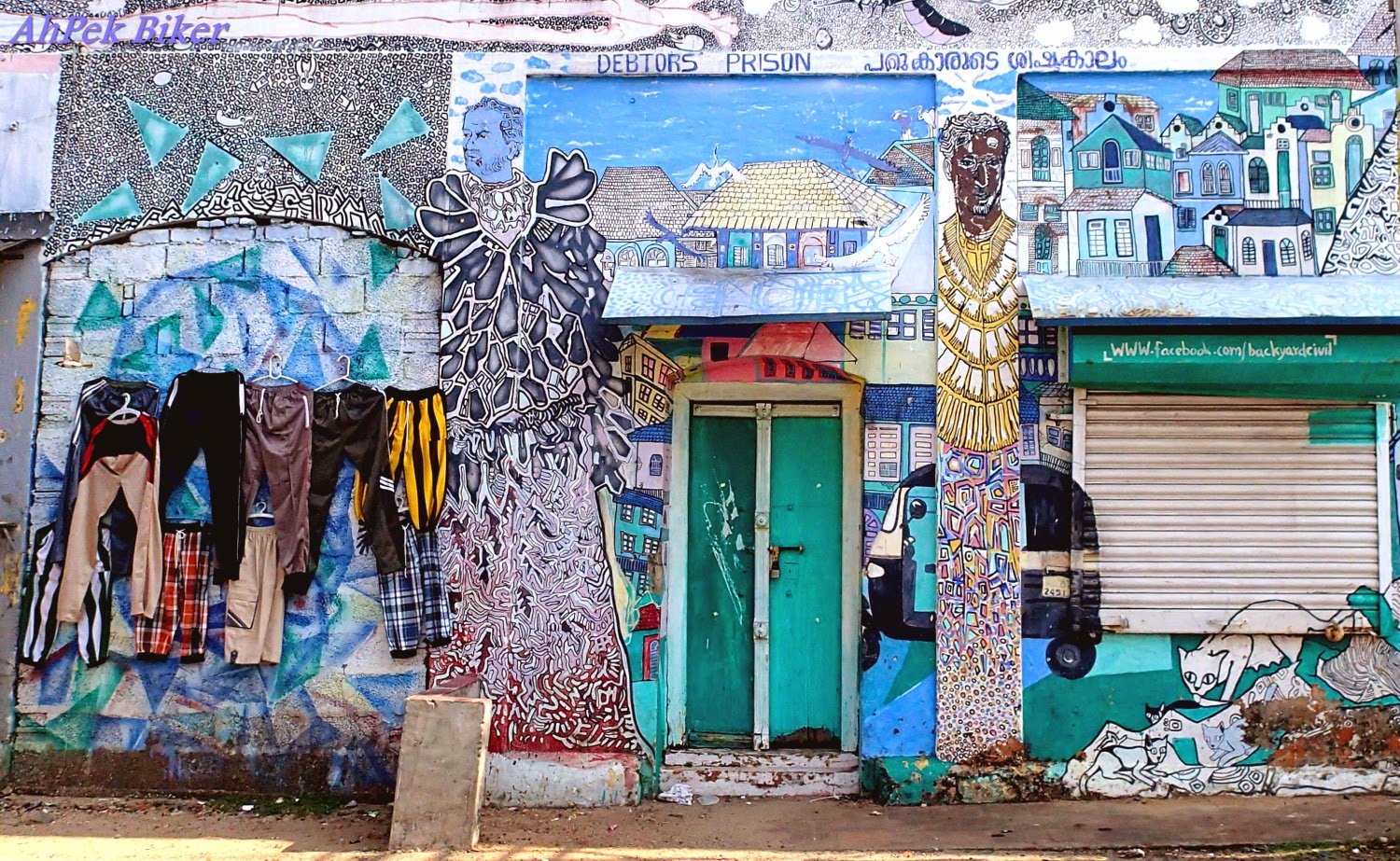 ... and this wall mural with colourful pants hung out to dry. 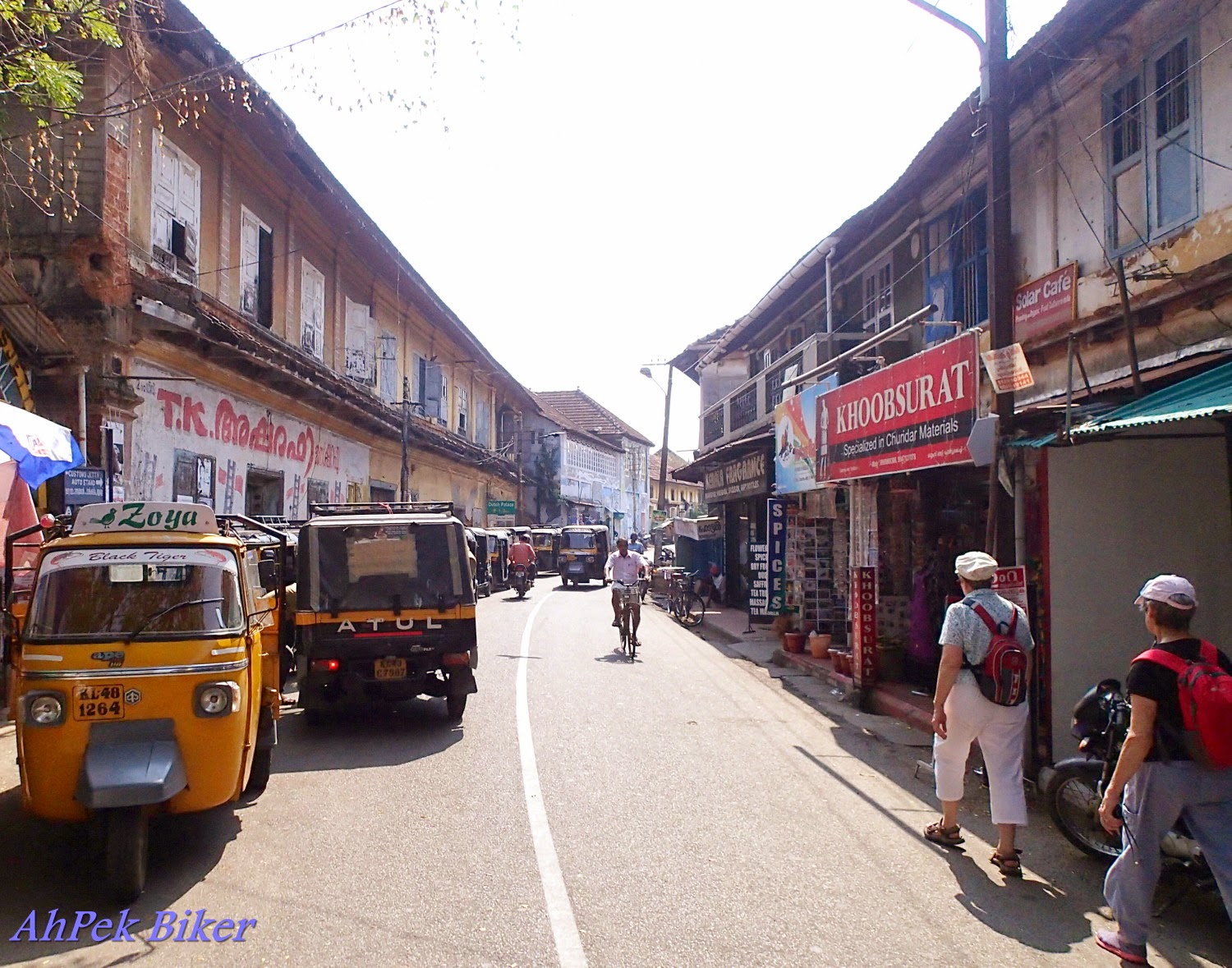 We made our way eastwards, away from the touristy area into the old port area. The streets are now much narrower but lively with local life. 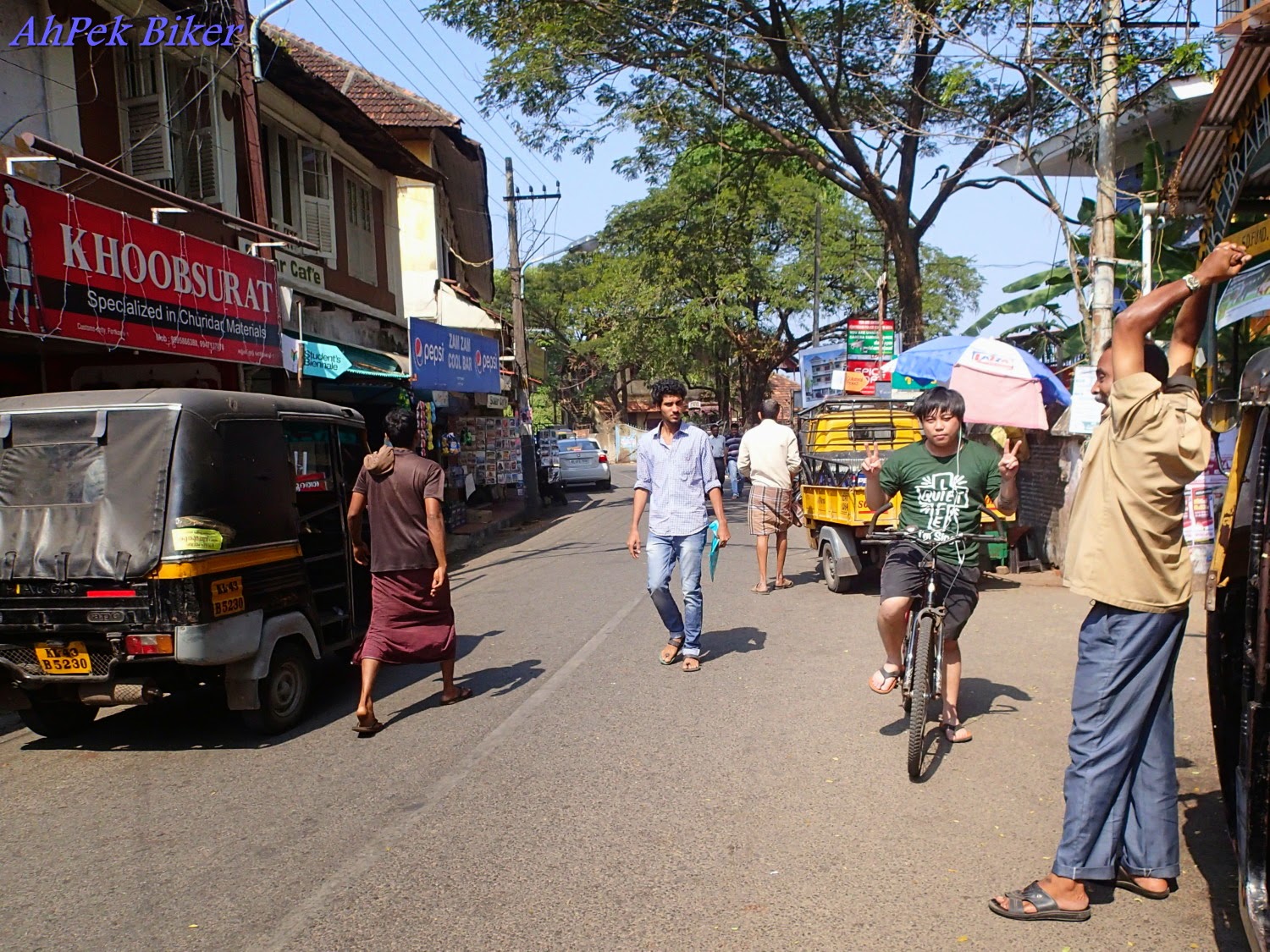 Although we could not cycle fast in this busy area, Kev seems to be enjoying himself witnessing the day-today life here. 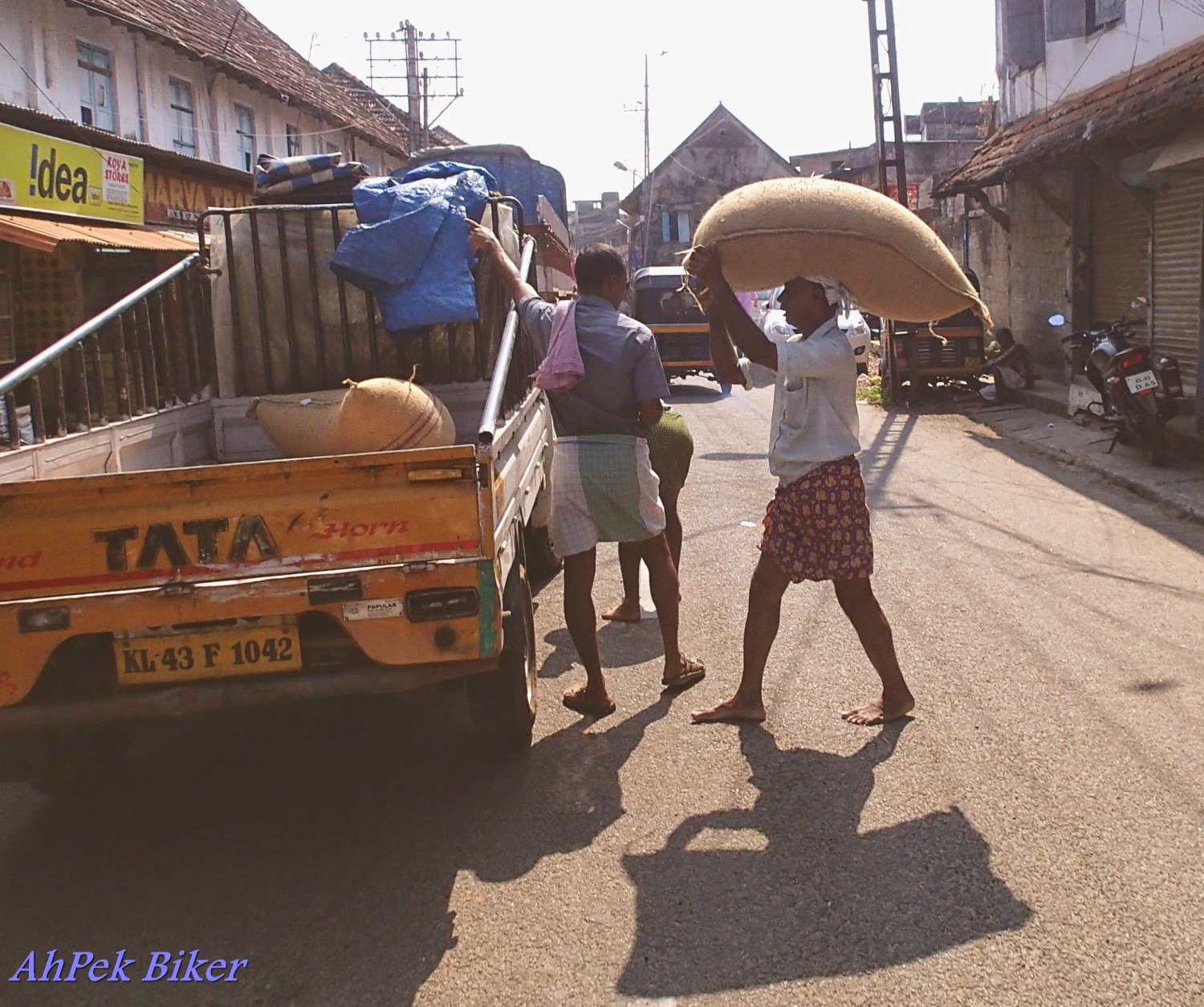 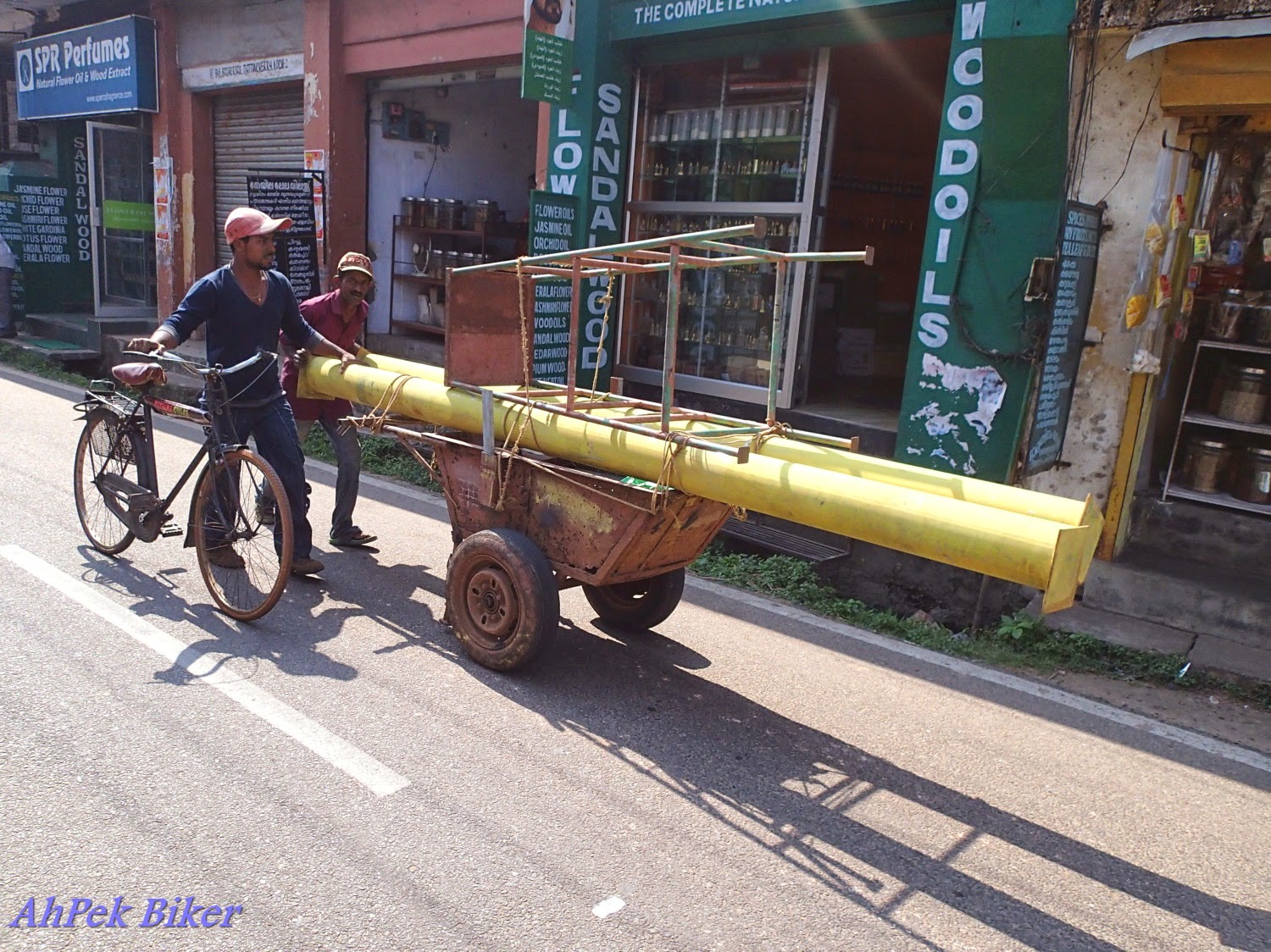 Of people delivering goods by their unique means. 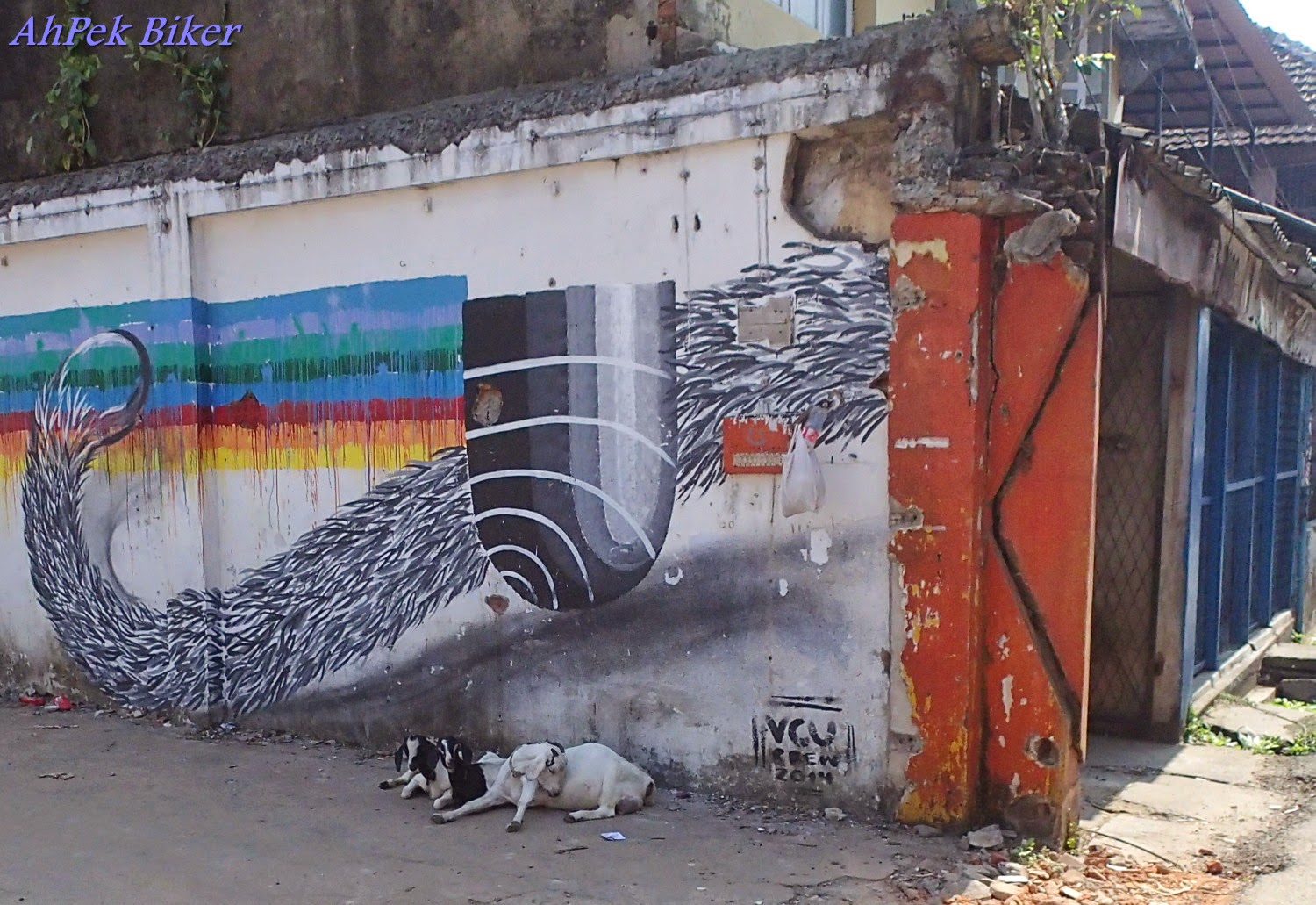 And of goats resting in the shade. Stopped by at the Jewish Cemetery for a quick look and said some prayers. 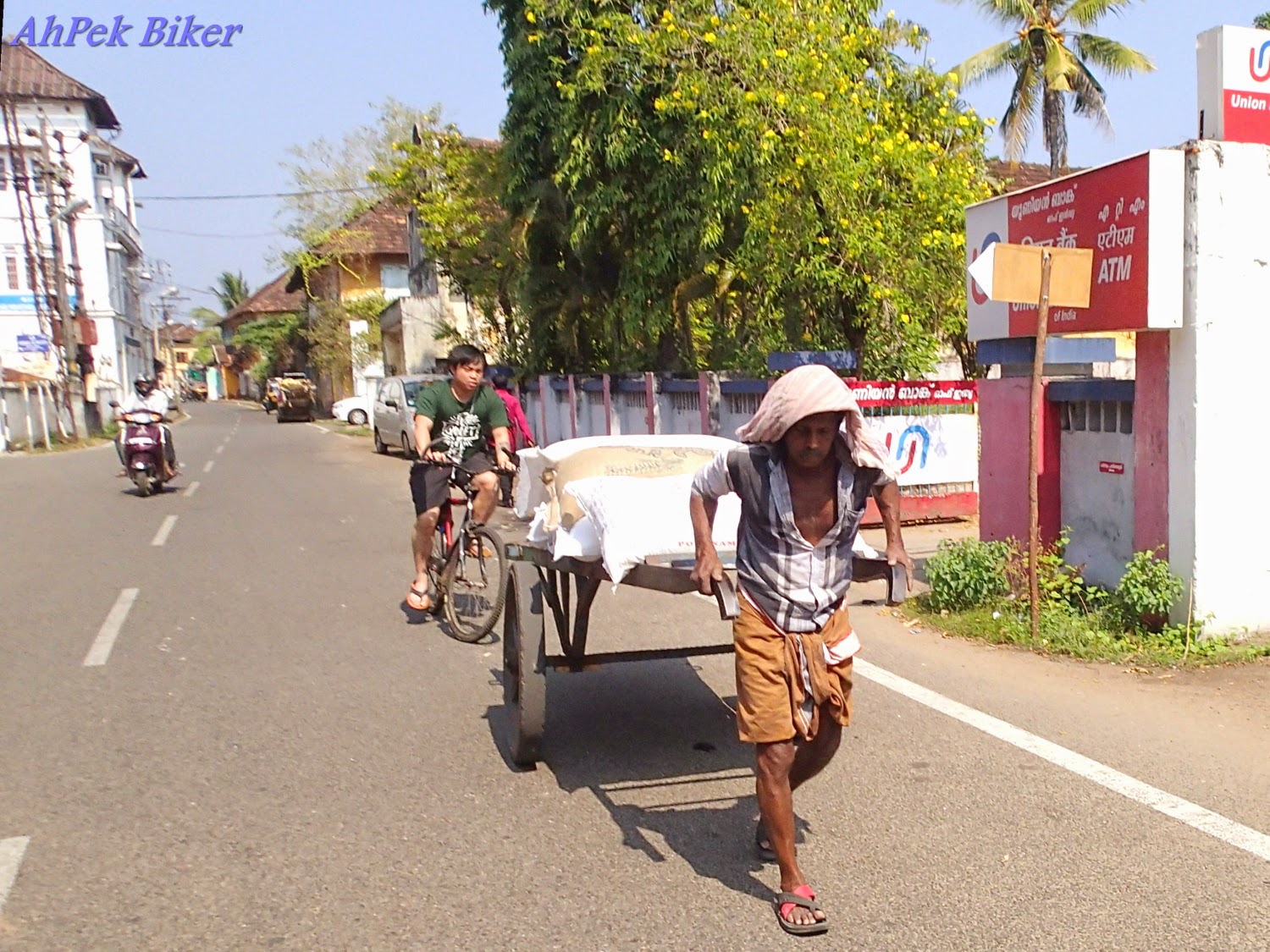 Away from the busy port and warehousing area, the roads are now wider but we had to slow down for the occasional slow traffic... 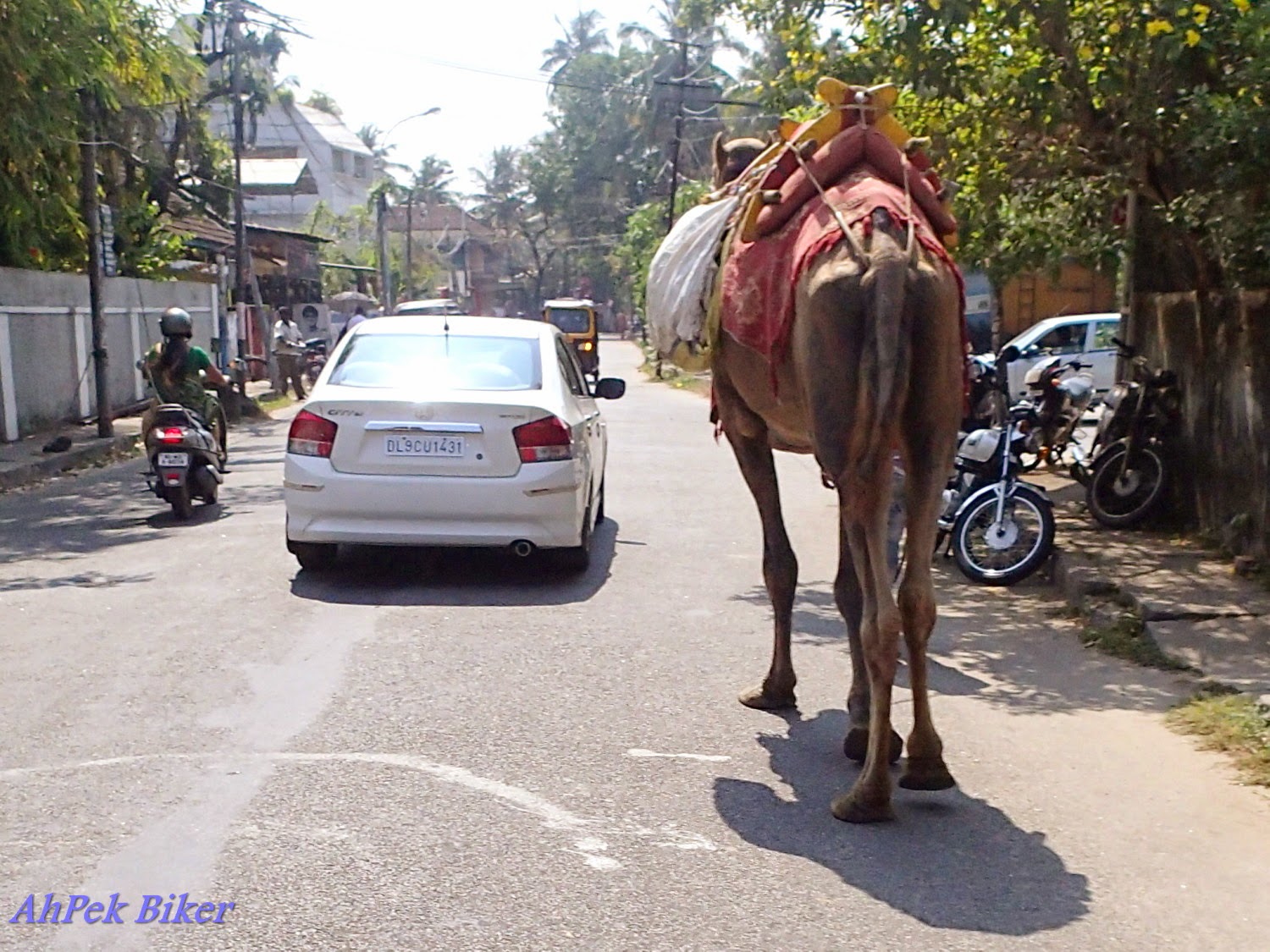 ... and that odd camel that comes along once in a while. 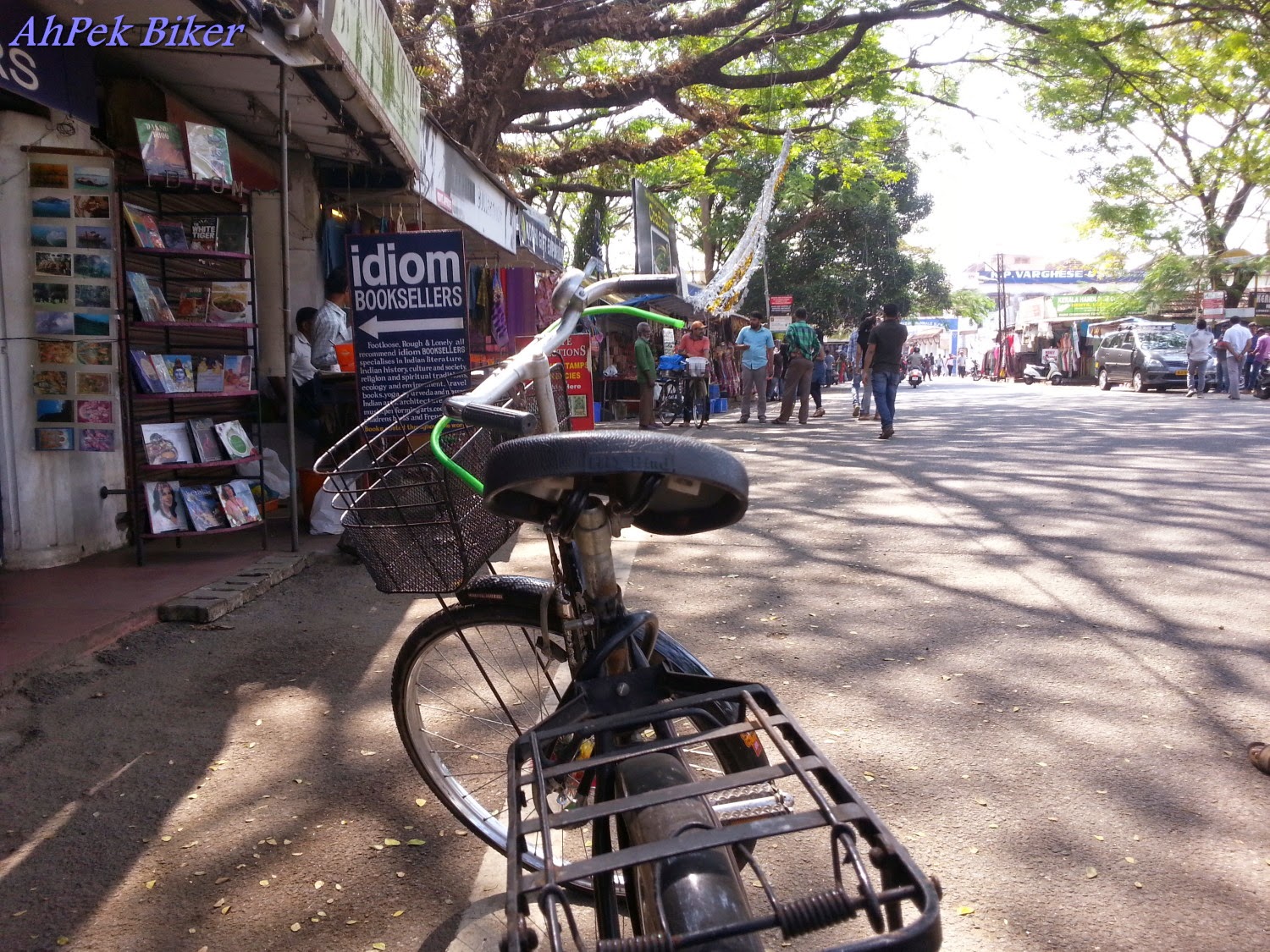 Oops! We were so engrossed and taken in by the sights and sounds of the place that I was disorientated and really got lost. A quick stop to ask for directions should sort out matters.
But the directions given were not very clear, luckily I had switched on the Map My Ride app when we started off at the hotel. We were without any mobile data now but the wifi at the hotel had downloaded the map of the area otherwise I would be just seeing a tracking red line on a screen bare of any map. 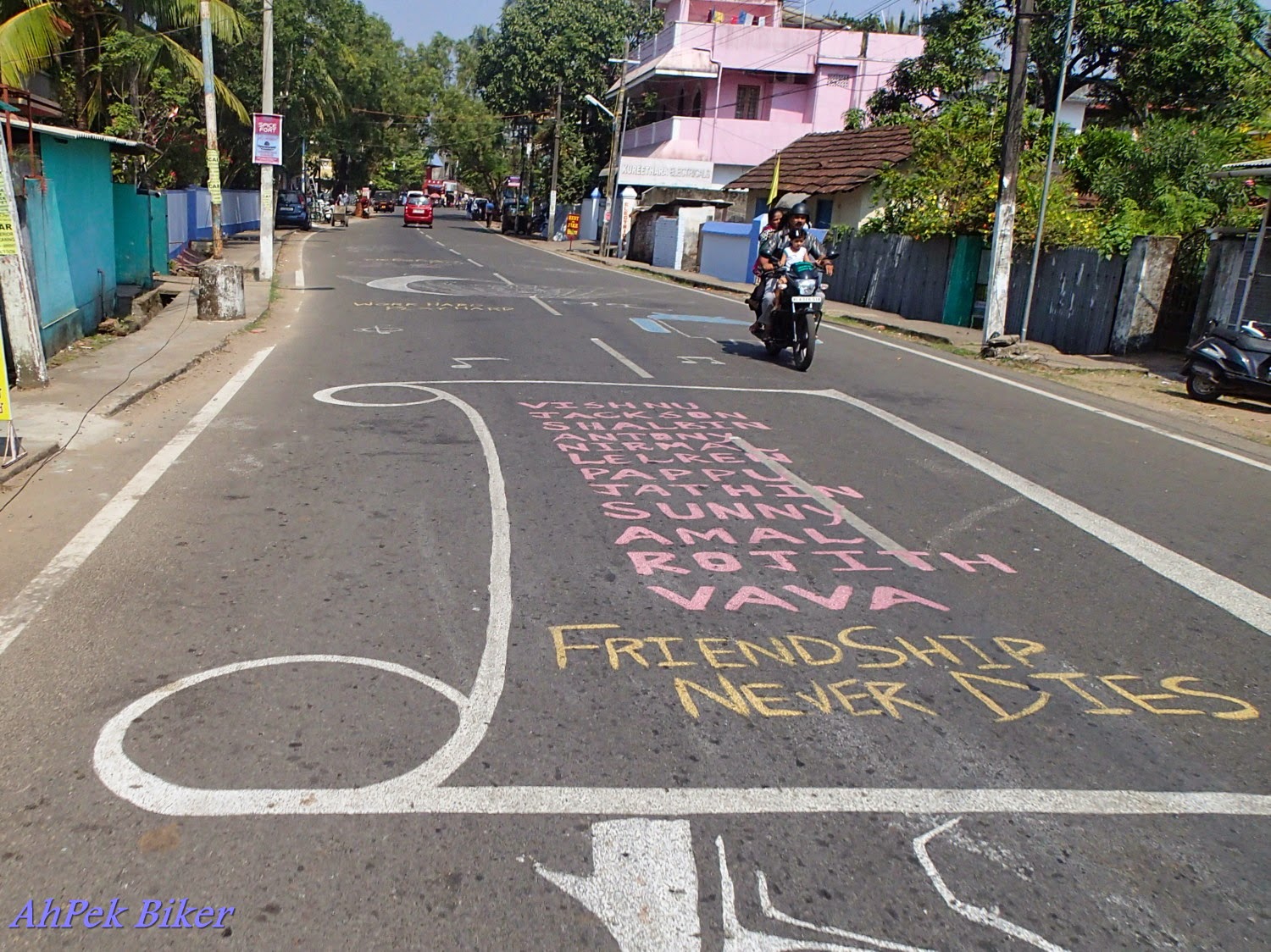 With apprehension, we rode back. I was a bit worried but my spirit was lifted by this Friendship mural on the road.
On an off, we stopped to check directions on my phone tracking app and we were fortunate to make it back to the hotel slightly pass noon - just in the nick of time to check out from the hotel.
PHEW!