Route Recommendations :
1. The Putrajaya Lakeside (... see blog) is a scenic place, ride there at a leisurely pace and stop wherever you feel like it.
2. Don't miss riding at the boardwalk at Precint 8.
3. After the boardwalk there is an interesting bamboo grove section.
4. Saujana Hijau offers a fantastic view of pine tree forests, and also gives a good climb; and best of all it's motor vehicle free. 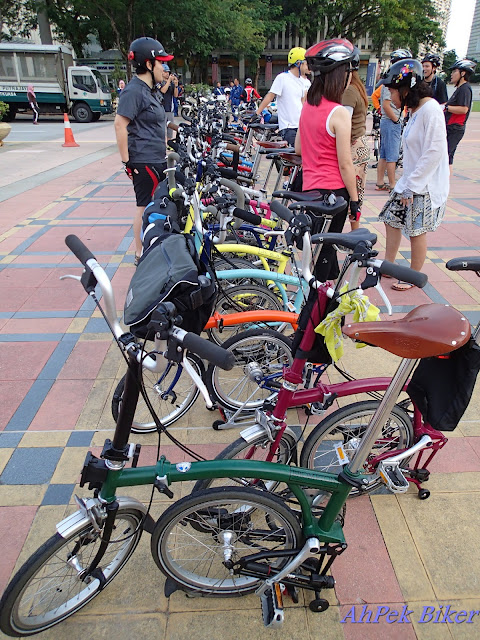 When Finty, the leader of MY Brompton Malaysia FaceBook group posted a ride for Brompton riders to take part in a ride at Putrajaya, I was most keen to join in. Since getting my Brompton (... see Buying My 3rd Foldie), I had never rode with the group; so this will be the opportunity to ride with them and more importantly to get to meet old and new friends. 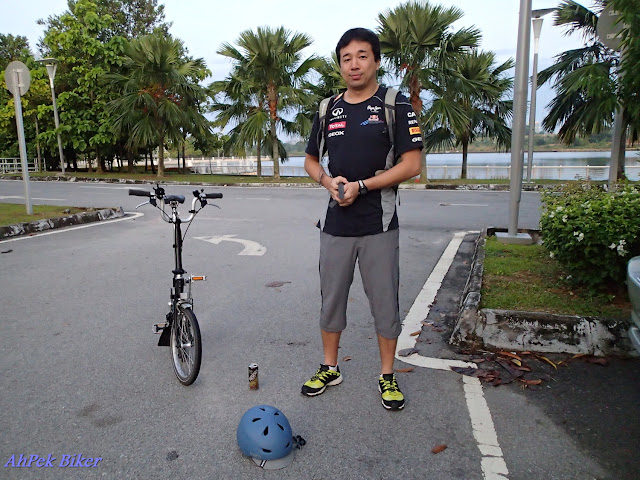 En route on my drive up to Putrajaya  I picked up Takeshi from the Kelana Jaya LRT station. He's a Japanese based in Malaysia, I have met him casually before, this will be a good chance to get to know him better. 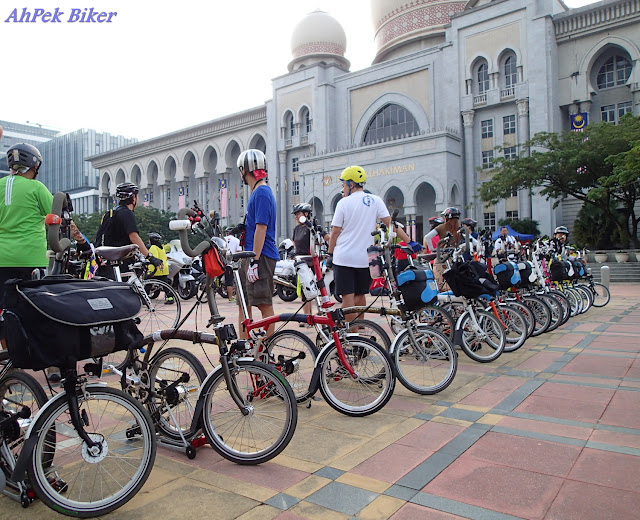 From the Millenium Monument we rode off to the Putrajaya Boulevard and parked our bikes at the front of the Palace Of Justice; our bikes there gathered many curious stares. Many has not seen such folding bikes with funny rear wheels that turn upon itself... "Er... how to ride if the wheel is like that?" some asked. 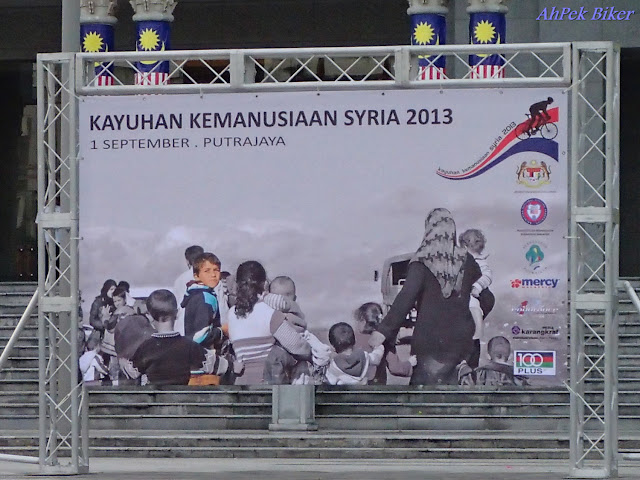 Here we waited for the start of the "Mercy Syria" public ride event, it's an event held to raise funds and awareness for those suffering during the present turmoil in Syria. 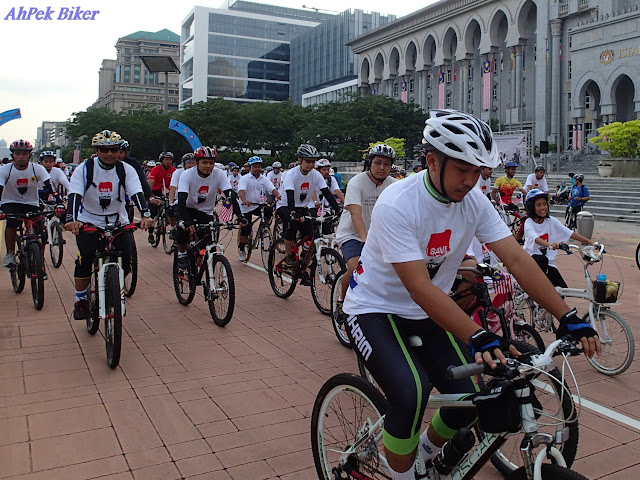 The Mercy Syria ride kicked off, we let the main mass of many cyclists ride by first before we joined the tail end. 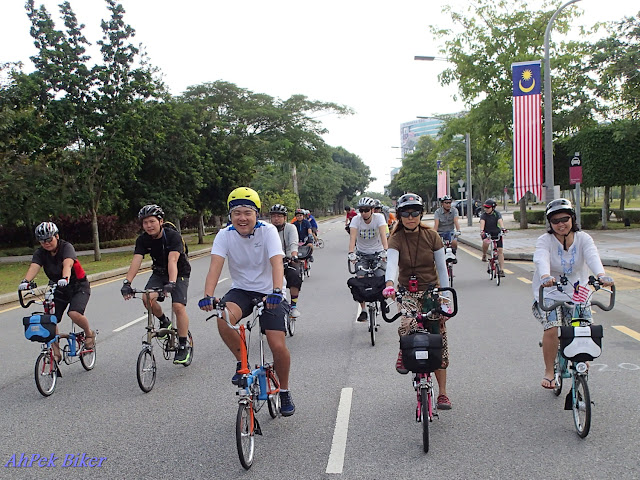 And here we are, happily cycling down the Putrajaya Boulevard   It's great to be able to ride, and such a cool looking gang we were. 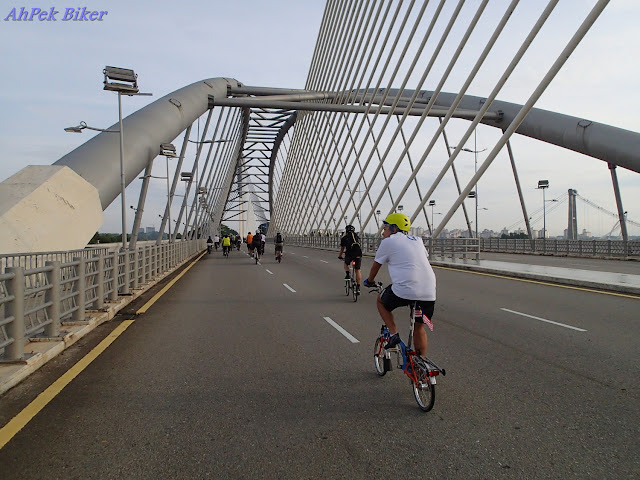 Riding across the Sri Saujana Bridge - I have always liked this bridge with it symmetrical curves and two sharp pointing main masts. 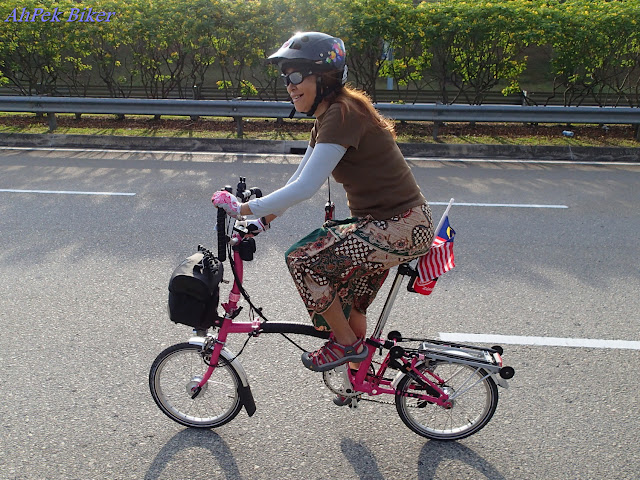 A couple of the riders came wearing sarongs; here's Rita in a nice batik one. We call her the Pink Lady, she rides a Hot Pink Brompton and often with matching pink attire - pink helmet, shoes, jersey, etc. 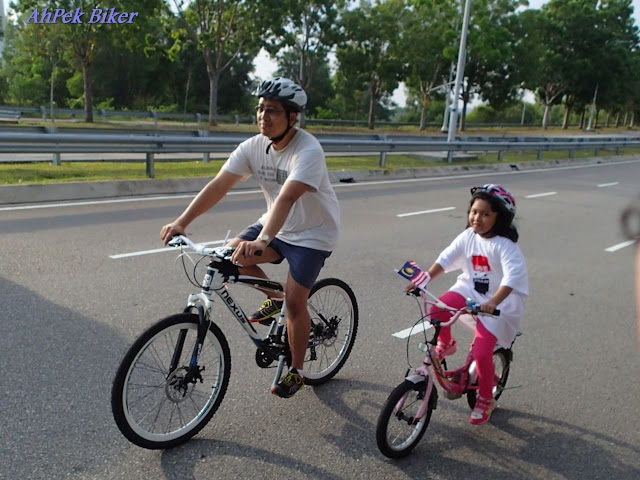 Slightly ahead, I saw this little girl riding a cute little pink bicycle with her father, they were part of the Mercy Syria ride; it's good to start them young to be aware of the way of the world out there.
Hey Rita! Watch out, here's a future Pink Lady wannabe!

At Persiaran Barat, we waved our goodbyes to the little girl & her father and headed off on our own. From here on, Pak Adib, the man in orange will be leading us on a more interesting route. He's just into his sixties and jokingly call himself a "Six Series", a word play on the BMW car series. 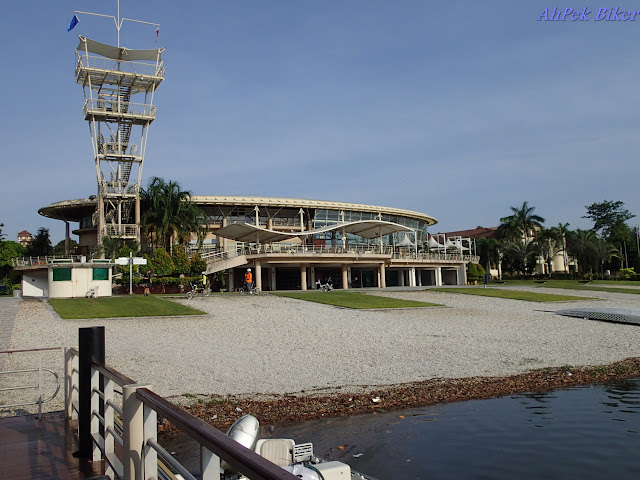 We stopped at the Putrajaya Lake Club with its stony "beach". It was a good place to stop, as from here, the view across the lake is rather scenic ..... 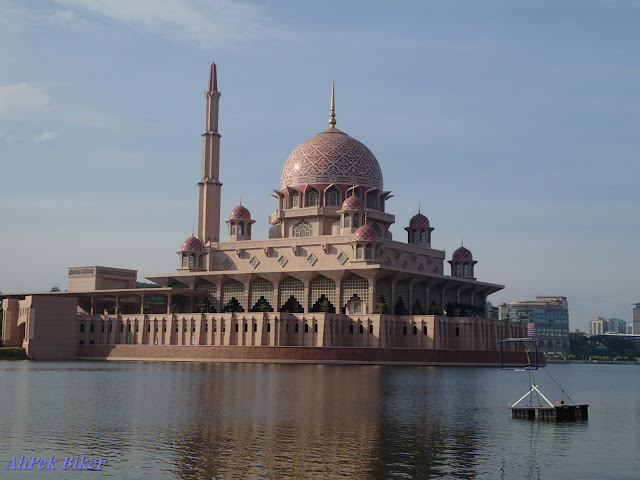 ..... a lakeside view of the Putra Mosque - taken at the right time of the day from this spot, it is quite picturesque. 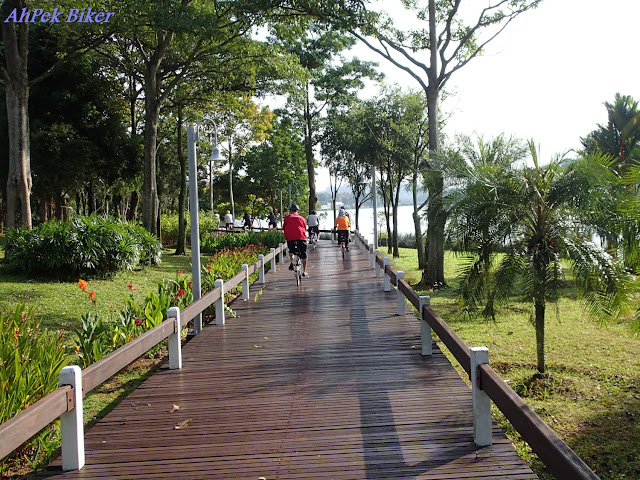 Beyond this, the ride got even more interesting with us riding onto boardwalks along the lakeside.
Pak Adib was a conscientious ride leader, briefing us on the area we are riding through and what pitfalls to watch out for along the route; eg. on the boardwalk - not to cycle along the center as some nails could be sticking up above the planks.
Nails! That's a real no-no for our tires. 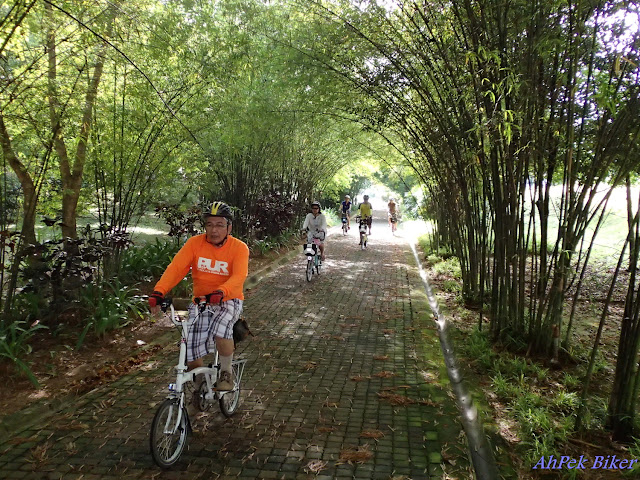 A short ride into bamboo groves, where the bamboo formed a nice archway. 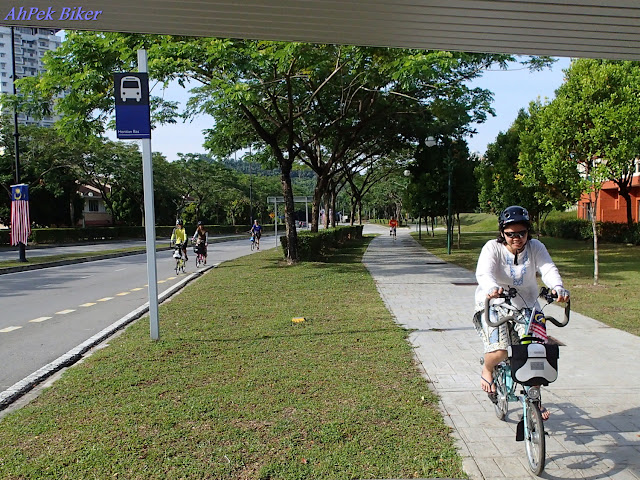 We are back onto the roads again, heading for our next destination Saujana Hijau. Some of us took to riding on the pedestrian/cycling lanes, others rode on the road. The trouble with the cycling lanes here is that they are finished with either paver bricks or textured concrete, making riding on them rather bumpy; I do hope the authorities will take note of this. 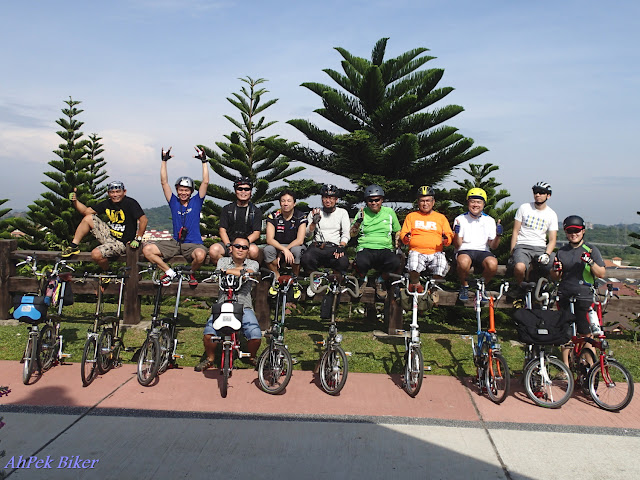 Saujana Hijau is a park on a small hill overlooking Putrajaya. The hill is dotted with pines trees in many areas. Partway up the hill, at a flatter area with a rest pavilion, we took another group photo. For flower lovers, this place has flower beds with lovely, brightly colored flowers. 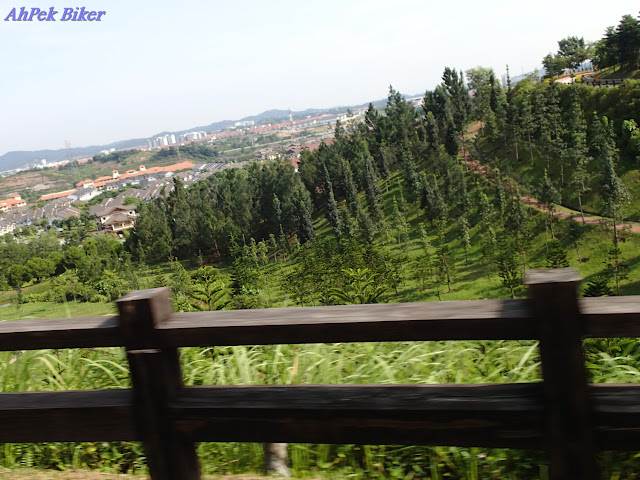 For cyclists who love to climb, this place offers a good climb amid a nice mini pine forest. 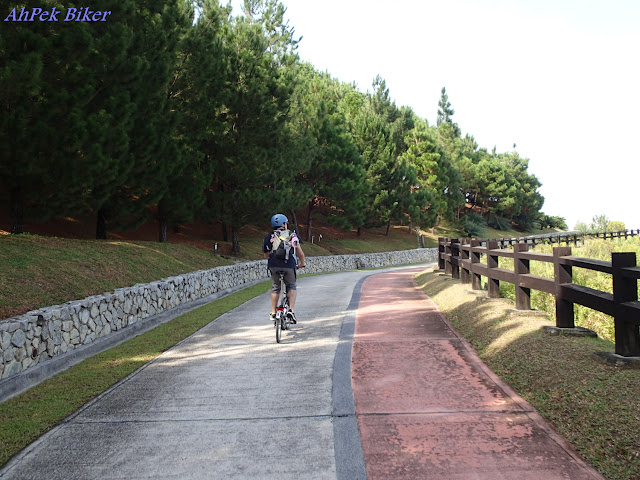 Takeshi was full of joy, whooshing up and down the cycling lanes - this place must remind him off home. 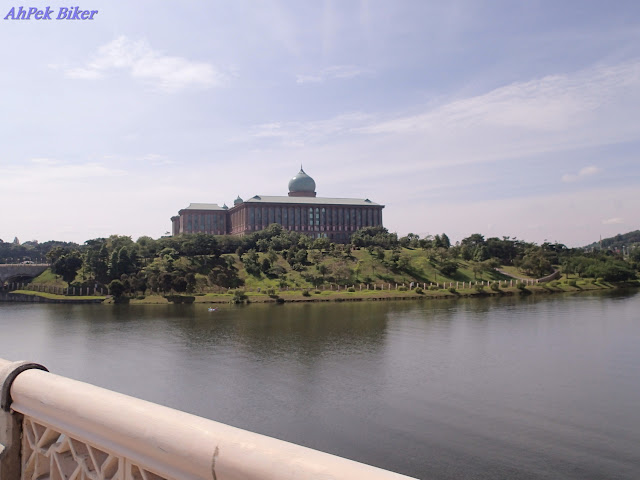 Back on the flats again, we are riding on the Seri Perdana Bridge. Across the lake, the Perdana Putra (Prime Minister's Office) can be seen sitting grandly on a hillock. 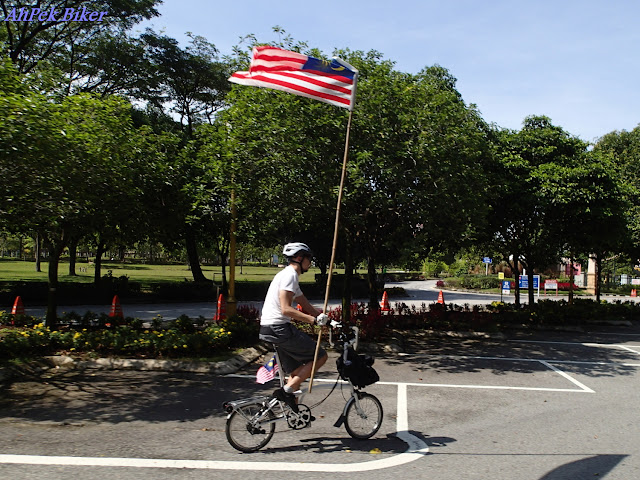 The previous day was National Day, our Malaysian Independence Day. That was why many of the streets were lined with the Jalur Gemilang, our national flag. Many of us were riding with small Jalur Gemilangs attached to our bicycles; Ronnie took it a step further and rode for a short while carrying a Jalur Gemilang fluttering at the end of a bamboo pole.
Perhaps next year, we should join the National Day parade, all carrying flags Ronnie-style. 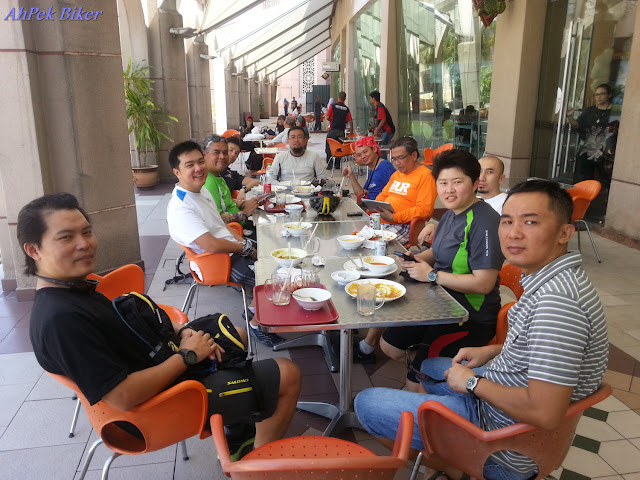 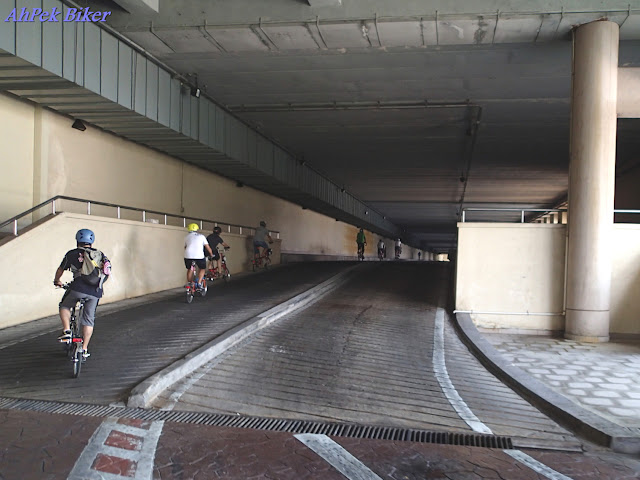 But Pak Adib was not finished with surprising us; after lunch, instead of the normal route back to our end point, he took us on a route through a tunnel below the Putra Bridge - it's access is from the Medan Selera lakeside level.
Hey! There is a tunnel here?


It was a warm ride of meeting up with new friends and catching up with old ones.
It was a ride of surprising areas that many does not know exist in Putrajaya - boardwalks, bamboo groves, pine hillocks, secret tunnels, etc.
Many thanks to all for making this such an interesting ride. 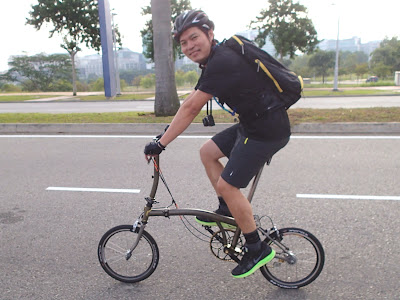 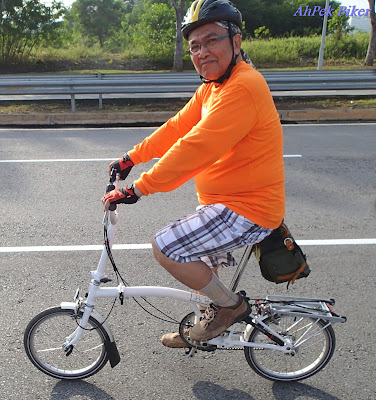 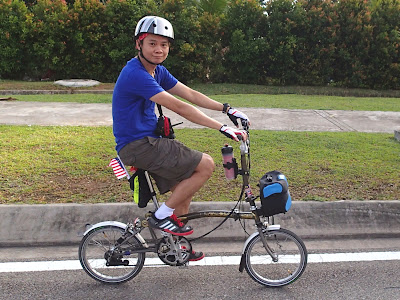 You are at - Jotaro's Blog / AhPek Biker / Cycling Malaysia / Putrajaya / Brompton Malaysia Ride Sept. 2013
If you like this, view my other blogs at Jotaro's Blog
(comments most welcomed below. if you like this pls share via facebook or twitter)
Posted by Jotaro Zen at 11:38 PM