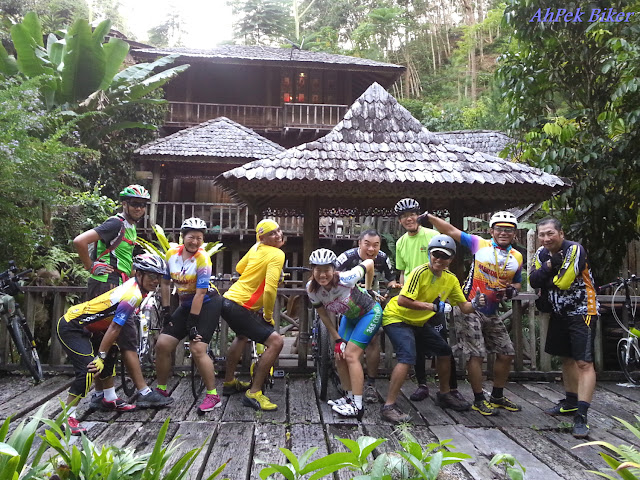 Route Recommendations :
1. With a rural setting and light traffic Kampong Sungai Ara is surprisingly a nice place to ride on.
2. The route through the secondary jungle leading up to The Carpet should not be missed.

Ok, Ok... there's no such thing as a carpet like those magical ones found in the Tales of The Arabian Nights. But we did go to a place that Penang cyclists call the Carpet; though not magical, it came close - enchanting us with what it has to offer, touching us in different ways, and bringing out the fun and laughter in all of us.
Another interesting thing is how my blogging has made me new friends. People who read about my cycling adventure contact me through my blogs; some wanting to ride with me. I am surprised that my simple cyclo-adventures has touched many; and that they want to have the fun that I have, the pain that I endured and perhaps even something more.
One of those who has expressed that kind of interest was Winson. Keen to ride with me he has requested that we get together for a ride when I was in Penang again. We did just that in my previous trip back to Penang (... see A Night Ride With New Friends), and our friendship was sealed from then on. Winson blogs too, see his blogs at Turn The Wheels.

This time round, I will be going up to Penang with a few friends for the CFAL (Cycle For A Lane) event, and also to collect the goodies for the postponed 56th Merdeka Penang 2nd Bridge Ride. Many of us will be there a day or two earlier, and are keen to scratch our riding itch prior to the actual event. So I organized a short group ride for my Kuala Lumpur friends. But then where shall we ride? For this I turned to Winson for help to plan out a  route - and he did a good job, for we had a magical time on the route he took us. 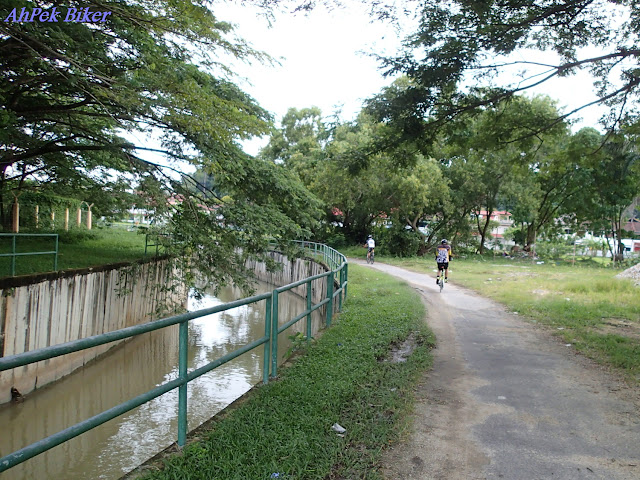 The ride was quite uneventful until we hit the kampong "village" trails at Sungai Ara , the entry point being the Fire Station at Jalan Tengah.
I must say that this place is a joy to ride on, partly shaded and some stretches running parallel to a storm drain. The trail is shared with other motorist but traffic is light here but still do ride with care. It would be great if the State Government could maintain or upgrade these paths, perhaps have more of them linking the villages - then Penang would have a Park Connector Network that would even rival Singapore's. It should even be better as there is so much natural beauty in Penang. 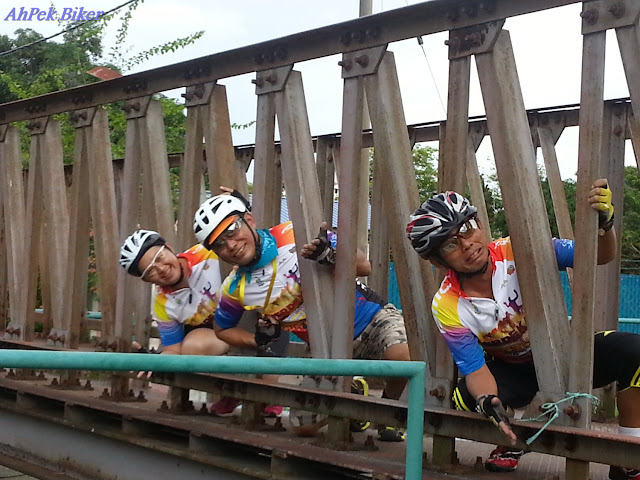 Some tom-foolery at a bridge here; we were riding off our frustrations over the postponed 2nd Penang Bridge Ride. Still in a way it was good as the bridge ride was clashing with the CFAL event on the same day. But then how many of us will be able to make it on the new date? 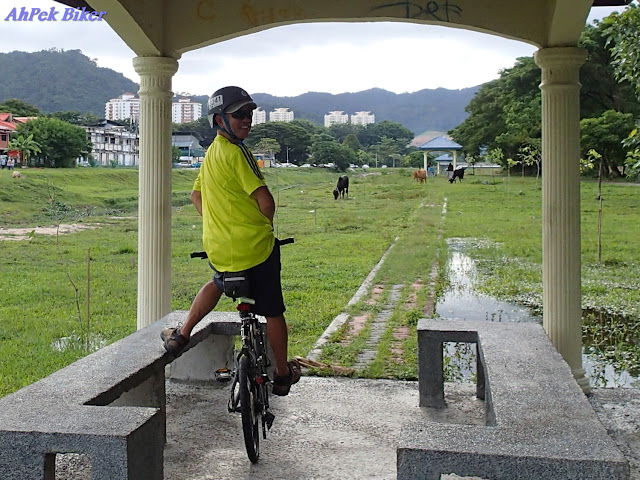 In an adjacent field, some cows were peacefully grazing, slowly munching grass for their dinner. Hmm.... could we cycle here until the cows go home? 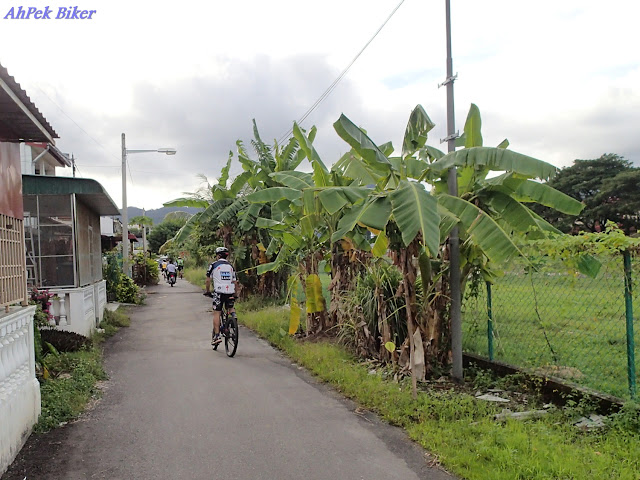 The cows will have to wait, we have other interesting destinations to visit.
We rode off, down a back lane - next to the green fields and it was very clean indeed! 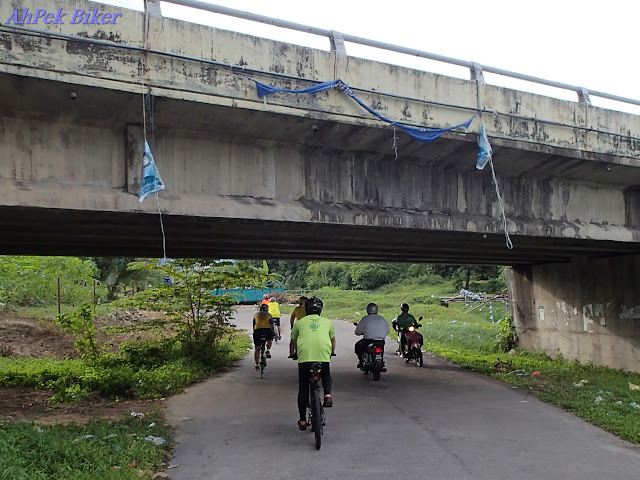 The route led to us riding below Jalan Tun Dr Awang... 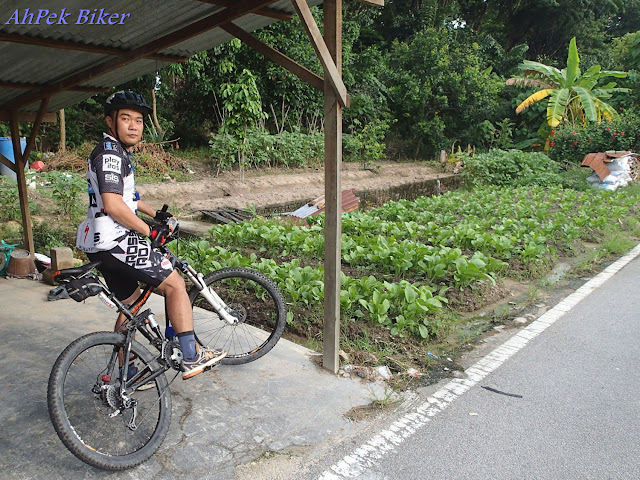 ... and pass some vegetable plots. 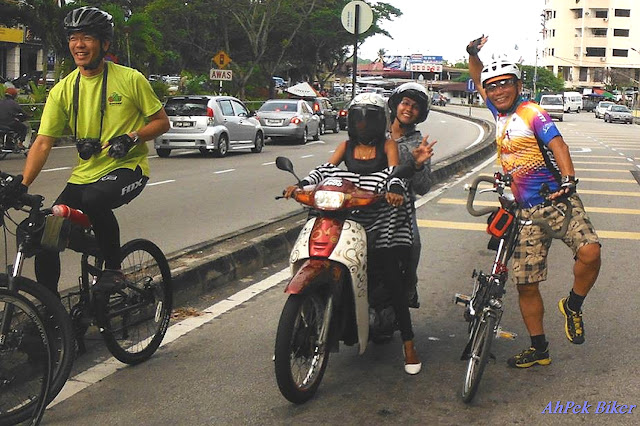 Back on the main roads again; and a bit of Indian dancing with passing Indian girls while waiting at a traffic light. 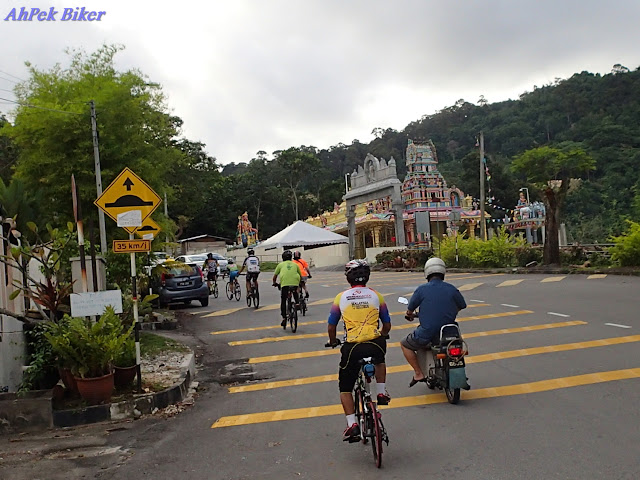 The road leading to the Carpet is Jalan Kenari with the Indian temple here being a distinct landmark. 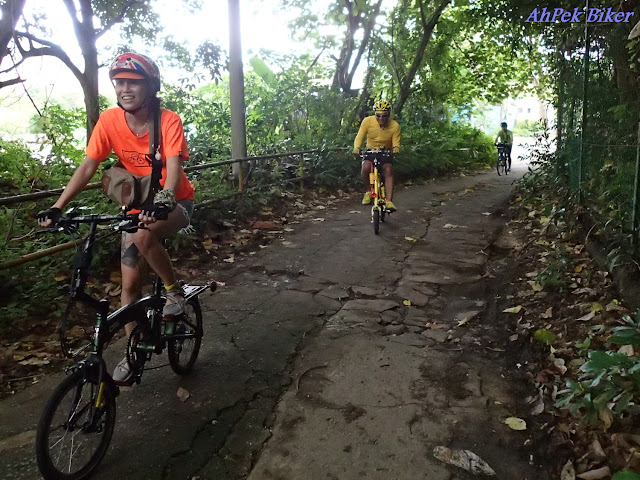 We are into the tracks leading up to The Carpet, time to be enchanted ... 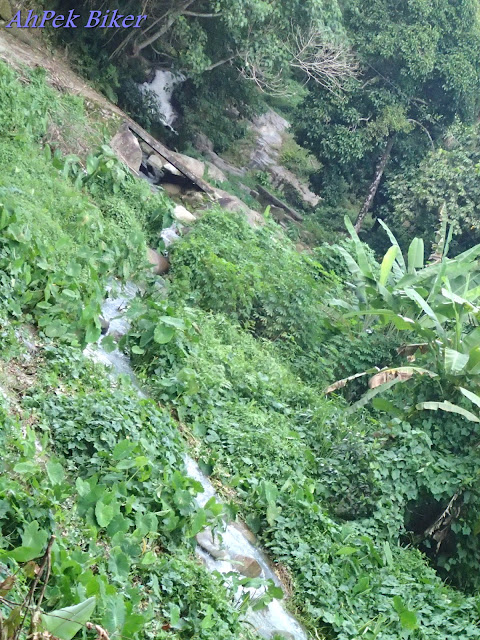 ... by brooks meandering through the low greenery, 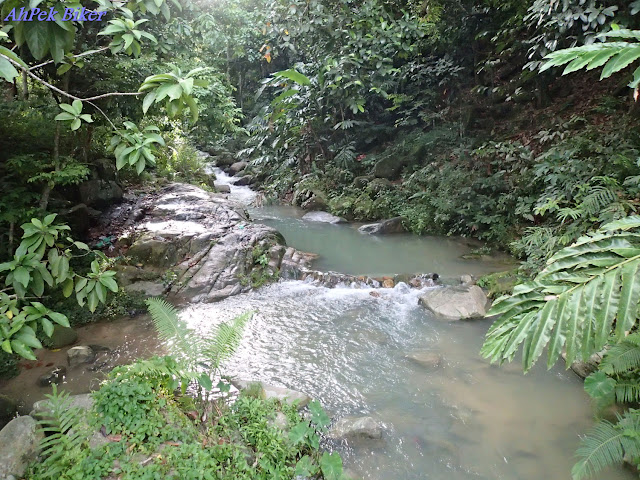 ... by streams cascading down mini waterfalls in the secondary forest, 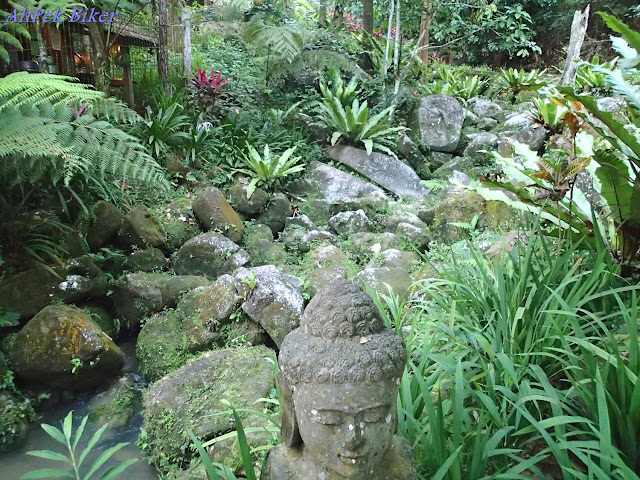 ... by mossy rocks overgrown with fern, 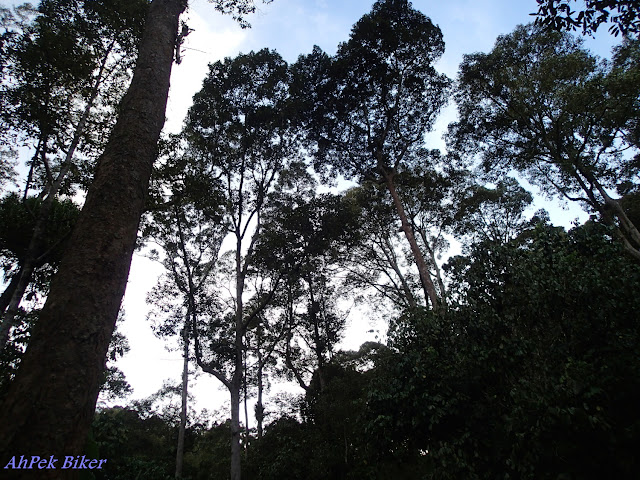 ... and by the cool, shady tall trees, slowly swaying above.
Yes, this place is magical in its own way; tugging on us to stop frequently, to look around, and to take in Mother Nature's beauty. 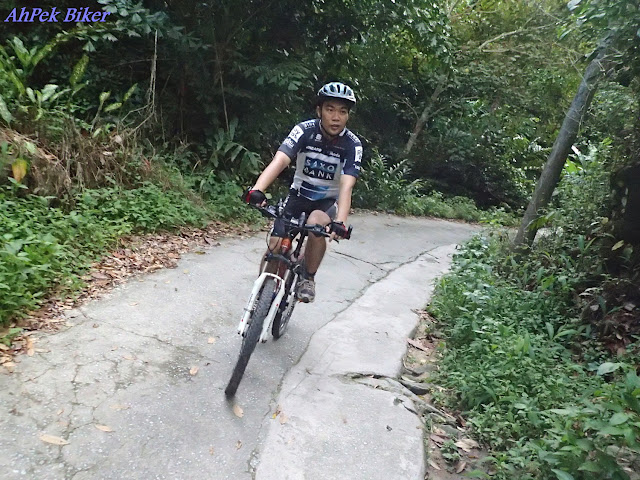 The tracks here aren't the best or smoothest to ride on. At many places there were pot-holes to be avoided; but nobody was complaining as we were just enjoying ourselves too much!
We rode in for about three kilometers, most of the way up slopes, before we turned back. 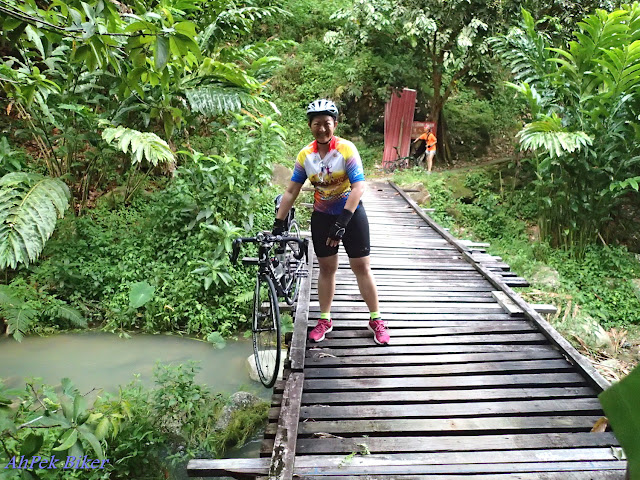 Hah! Another bridge for us to emulate the 2nd Bridge Ride  this time a rickety wooden one that looks just right among the greenery of the place. Crystal was a bit despondent after that, is she throwing her bike down the stream in frustration of the postponed ride? Hey, steady girl! 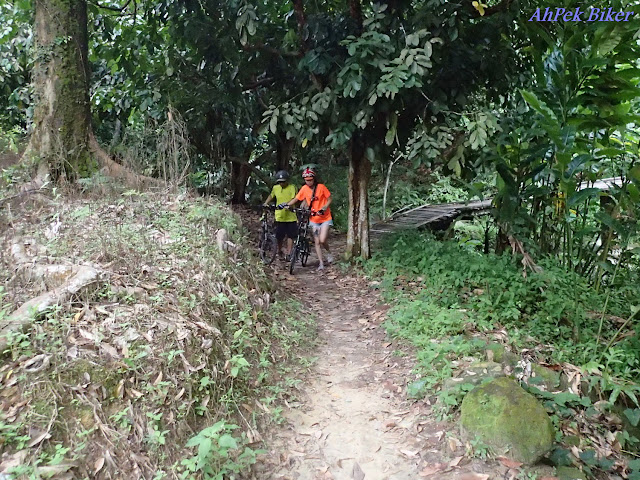 It's time to move on, it's time to cross that rickety bridge and leave the troubled waters of our frustrations behind.
The track did become narrower after that, fortunately it widen up after a short distance. Thank goodness, our foldies can't really take much of this off-road cycling. 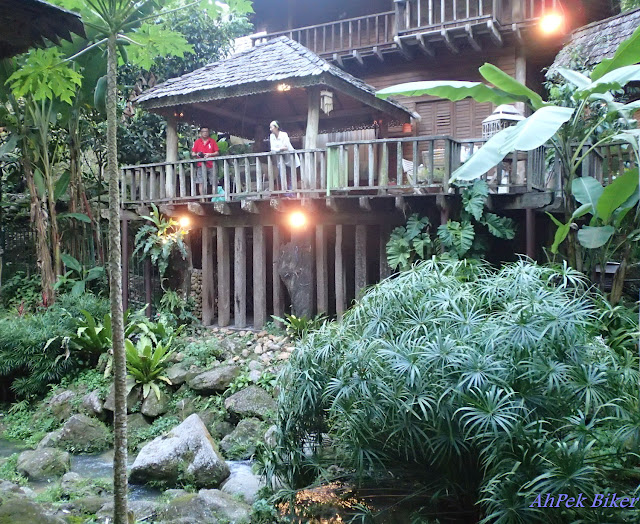 About another kilometer ahead is this Buddhist retreat. The calming green and quiet serenity together with the repeated trickling of the brook makes meditating easier, calming the senses to reach for one inner self. 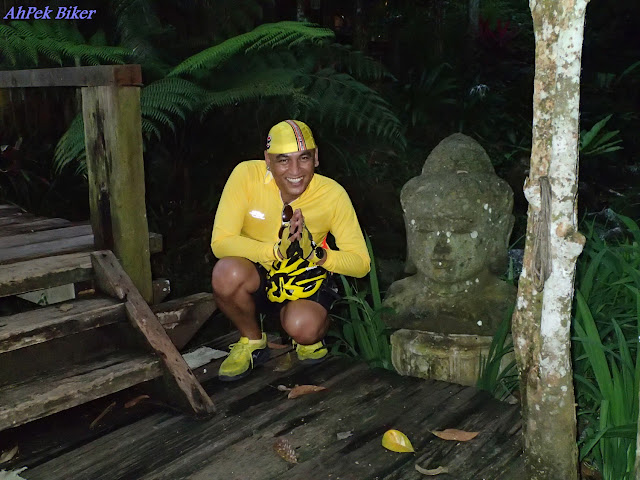 Larry, a true blue vegetarian, did some prayers too. 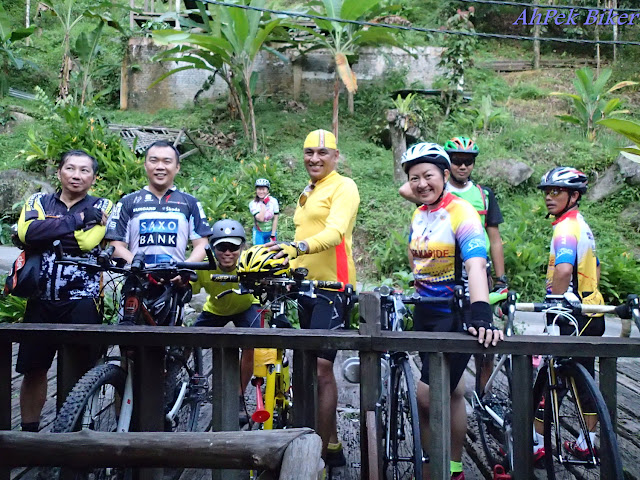 Taking a short break here, we let our fellow bikers hang around to take whatever photos that interests them. Some took photos of the rustic looking retreat building (but only from the outside, as it's no entry for outsiders), other took photos of each other in funny poses and the rest took photos of the flora - nice ferns, beautiful wild flowers, etc. 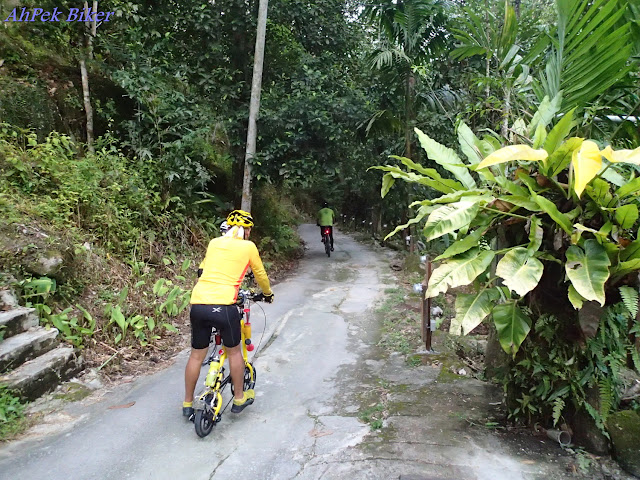 Truth to tell, we did not reach The Carpet. It was still a distant up, we had to turn back for dinner and also to conserve our strength for the following day's 85km round island CFALevent.
But then you must be wondering what is The Carpet. I wonder too - I hear whispers of it being a nice flat place right at the top, planted with green grass; hence the name. From there, I hear that one can view almost three quarters of the coast line of Penang Island, that must be a wonderful sight indeed!
For more photos see the set at Face Book AhPek Biker Magic Carpet Ride Album. 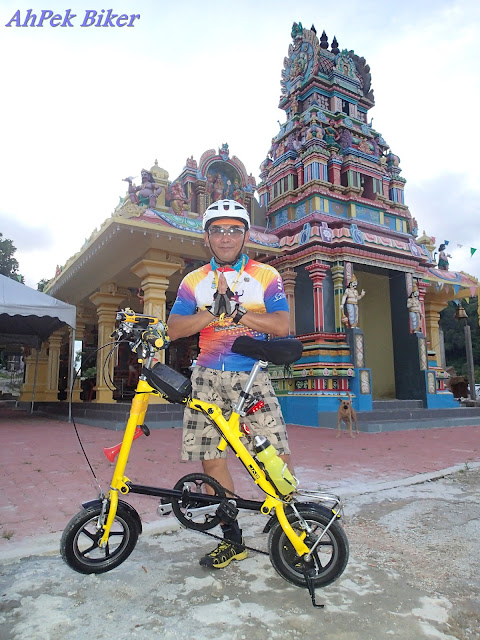 Out from the forest, we popped into the Indian temple (remember that one just before the entrance) - a nice colorful place, the jersey colors matches the place too. 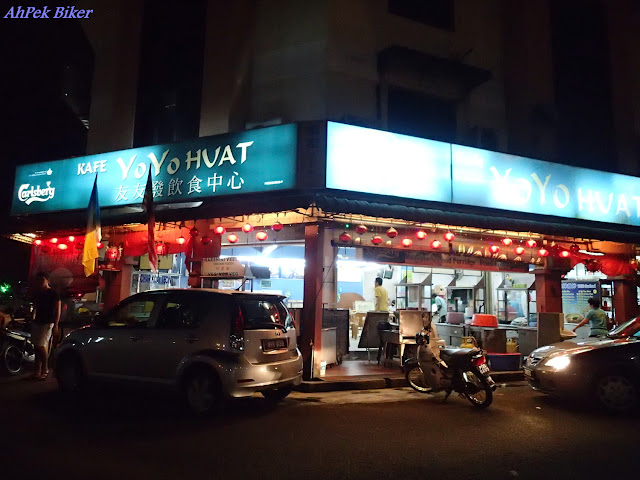 Dinner was at the YoYo Huat Cafe, a coffee-shop nearby. The food was nothing much to shout about, but then we were not here for the food - our other senses have been well sated by our ride.
After dinner, we rode back via a short climb at Bukit Jambul and just reached the The Palazzia in the nick of time as it started pouring five minutes later. 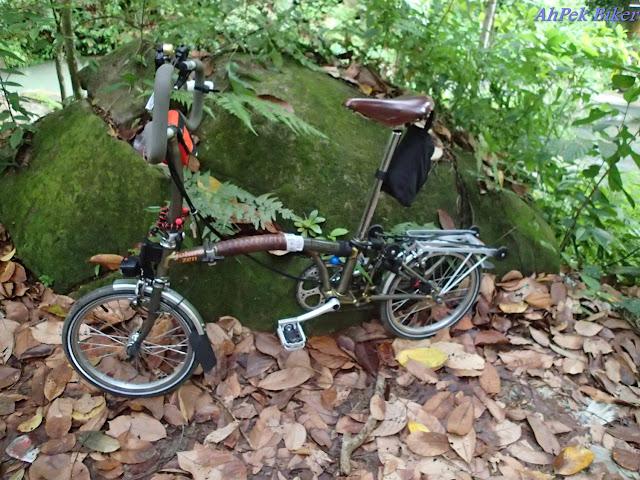 It was quite an experience, an enchanting ride in a wonderful place to a calm, rustic  Buddhist retreat. After this exhilarating and yet soothing experience, most of us will have a peaceful night's sleep and be prepared for the following day's gruelling CFAL 85 km. round Penang Island ride.

ABRACADABRA!
Our minds are prepared, let's take it on.


You are at - Jotaro's Blog / AhPek Biker / Cycling Malaysia / Penang / Magic Carpet Ride
If you like this, view my other blogs at Jotaro's Blog
(comments most welcomed below. if you like this pls share via facebook or twitter)
Posted by Jotaro Zen at 9:02 AM