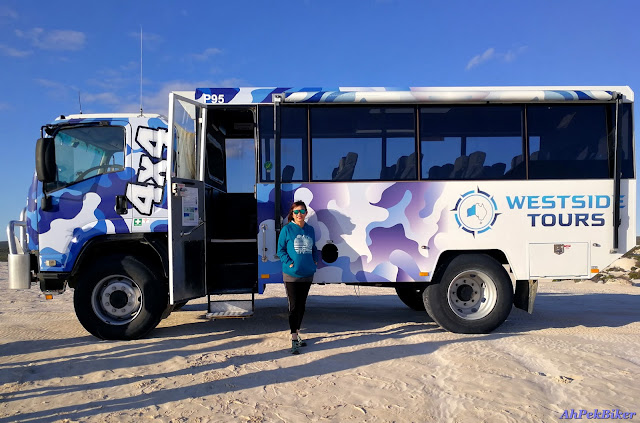 1. Traffic Directions!
Traffic in Australia is right-hand drive, so cycle on the left. Same thing applies when crossing the road, take note of the direction in which traffic is approaching from!
Driving courtesy is very important in the country. So do not hog the road, stay within your lane and put on your indicators when turning or changing lanes, and give way at city-centre junctions to pedestrians and other slower traffic even if there's not pedestrian crossing.

2. Route & Traffic Conditions
It's a non-cycling day a we followed a pre-book coach tour to the Pinnacles and other attractions. Two days prior, we had booked the Adams "Pinnacle Desert Explorer with Lancelin Sand Boarding" tour at AUD169 per pax which included a fish n chips lunch. Due to insufficient response, they upgraded us at no extra charge to their "Pinnacles, Koalas & Sand Boarding 4WD Adventure" (which should have cost AUD215 per pax). We upgraded to a "Lobster Lunch" for an additional AUD25 per pax.

6. Weather
Day temperatures at Carventes averaged 18°C, it was a sunny day with blue skies. Evening temperatures in Perth averaged 12°C.
A useful weather forecast site for the Australia is the AccuWeather. For more detailed weather, including cloud cover and wind speed, use Weatherspark and Ventusky.
7. Communicating with Each Other
When travelling in a group it's important to be able to communicate with each other, especially if one got lost from the rest.
We purchased Hello 1010 simcards online and got the 15-days/6GB prepaid simcards for Australia & New Zealand at MYR59 each. These were delivered within 3-5 working days but MUST ONLY be activated in Australia.
Alternatively, one can purchase the OPTUS pre-paid simcards at the Perth International Arrival Hall. 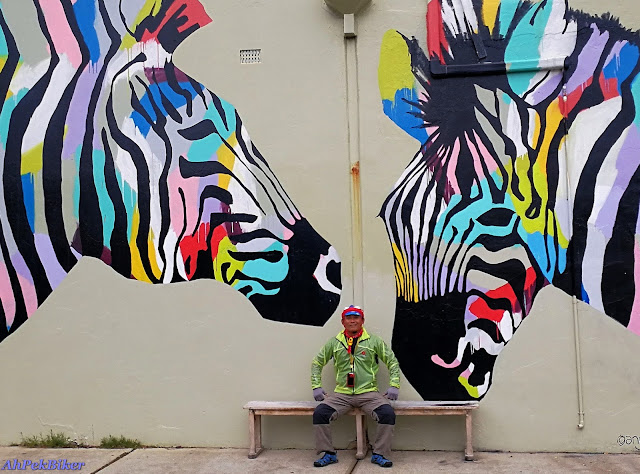 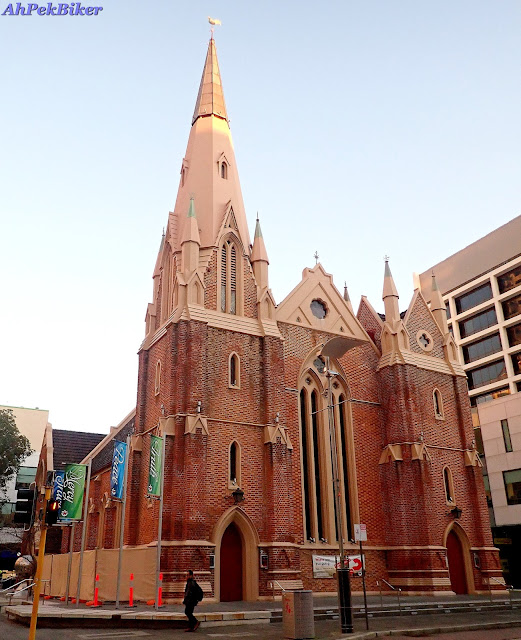 We are following a guided tour to the Pinnaccles and in the morning we took a walk down Hay Street to the pick-up point at Kings Perth Hotel. It was a nice, leisurely walk; and in the morning we had a better view of the building and other things along the road.
The above is the Wesley Uniting Church, first built in 1834 and subsequently rebuilt several times to accommodate larger congregations. The foundation stone for the present building was laid by Governor John Hampton on 25 October 1867, and three years later, the church was opened on Sunday 10 April 1870. 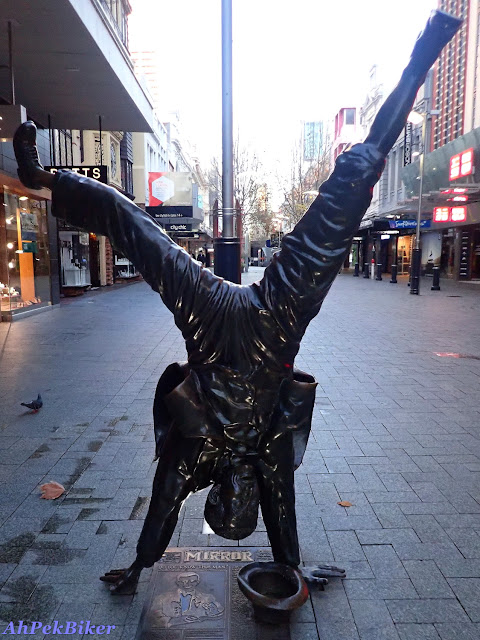 Beyond the church, the road becomes a Hay Street pedestrian mall, at right at the centre is a statue called "Percy Buttons' Aspiration Statue". "Born in 1892 in London, Percy Archibald Button emigrated to Western Australia in 1910, he worked at odd jobs as a farmhand and in Perth and 1917 enlisted in the Australian Imperial Force and was discharged home in October 1918. After which he took to a vagrant life in Perth, sometimes earning a living by selling newspapers and collecting bottles, but soon becoming the city's best-known street entertainer. 'Percy Buttons' attracted bystanders through his clever tumbling, somersaults and the tricks he performed with handcuffs. His battered, upturned hat received many small coins"
(..... click here to view other public art in Perth & other parts of Western Australia) 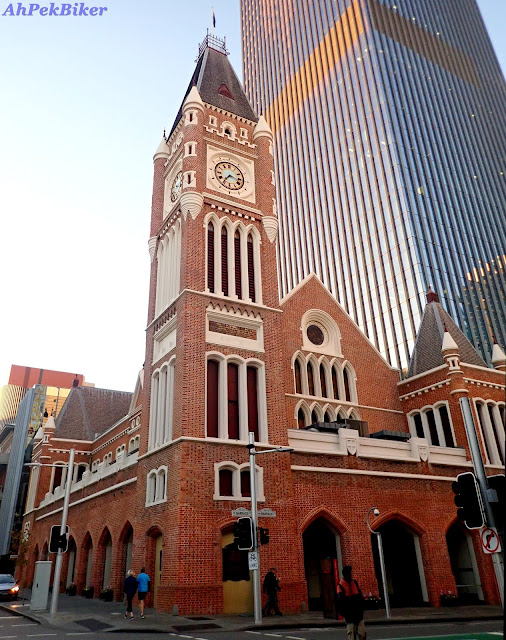 The pedestrian mall stretched up till the junction of Barrack Street and beyond that Hay Street is again opened to vehicular traffic. Just at this junction is the another stately building, the Perth Town Hall. "The hall was built by convicts and free men between 1867 and 1870. Its decorations contain a number of convict motifs, including windows in the shape of the broad arrow (those pattern used in prisoners outfit) and decorations in the shape of a hangman's rope." 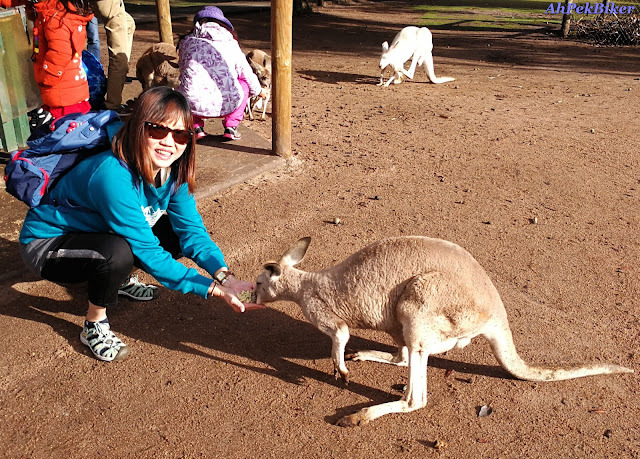 8:00am - The tour bus left Perth and within 45 minutes we arrived at Caversham Wildlife Park. Yes.... the joke was on us - we were here three days ago and were back again! But this time it was just a short visit. Include in this tour were special private sessions to go feed the kangaroos and other animals. This exclusive visit was good, with the limited numbers of us visiting, we had the kangaroos all to ourselves with a better chance to feed them. With less people around, our photo opportunities were better too. 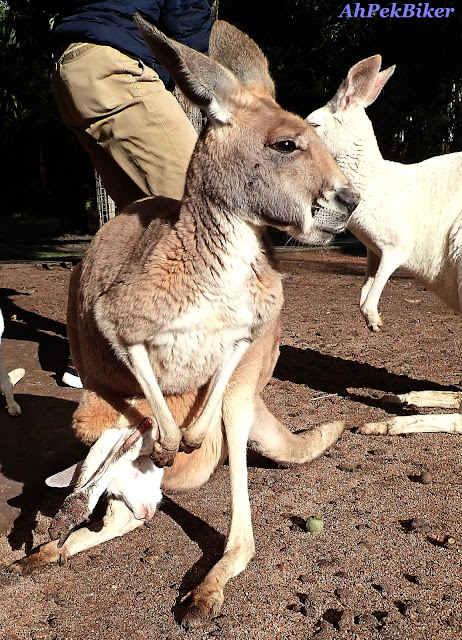 With fewer people around, the kangaroos were less shy, and we could observe close ups of female roos with the joeys (baby kangaroos) in their pouches. What was surprising was that some of the joeys were quite big, and had to be flexible to fit like a gymnast into the mother's pouch (see above photo). 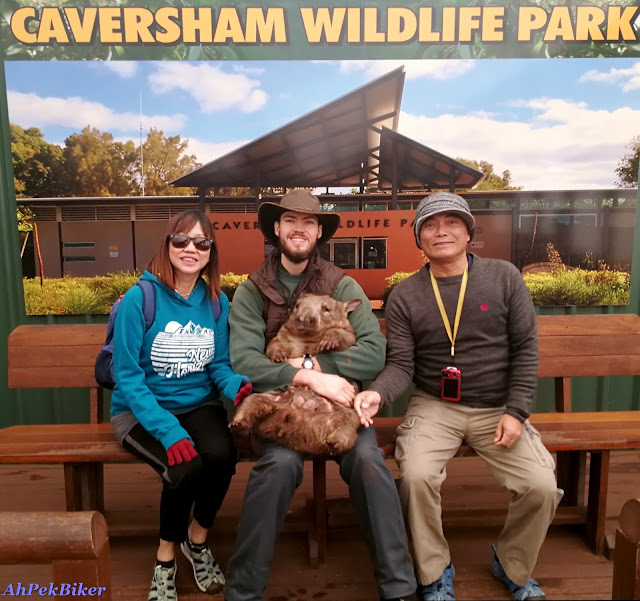 Our smaller group also allowed us to have more time when it came to petting the animals, but for the wombats, there was no difference. They just laid there cooly like Jabba the Hutt! 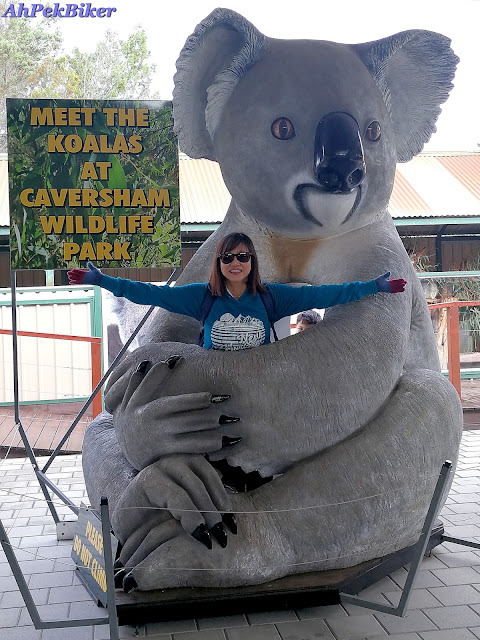 There was also a petting of koalas session, but we could only pet and not hug them... So....
Let's have the koalas hug us instead! 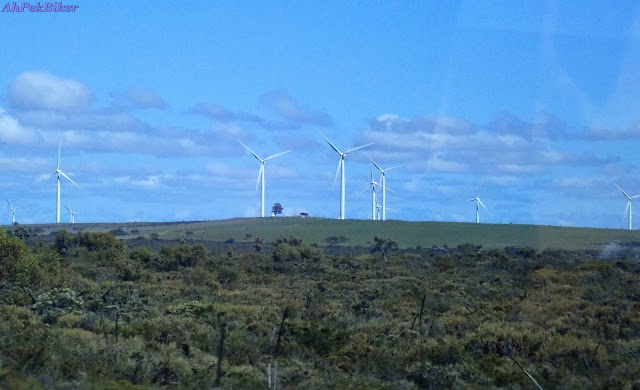 10:00 am - We left the park and headed for Carventes using the inner highway Brand Highway along National Highway 1. One and a half hour later, near Emu Downs, we passed by acres and acres of clear brush land hills. Sitting atop these hills were many tall wind turbines, the astonishing thing was that this wind farm occupied an area double the size of Perth. The Emu Downs Wind Farm consists of 48 Vestas wind turbines (each with 1.65 MW generating capacity and thus giving at total of almost 80MW). 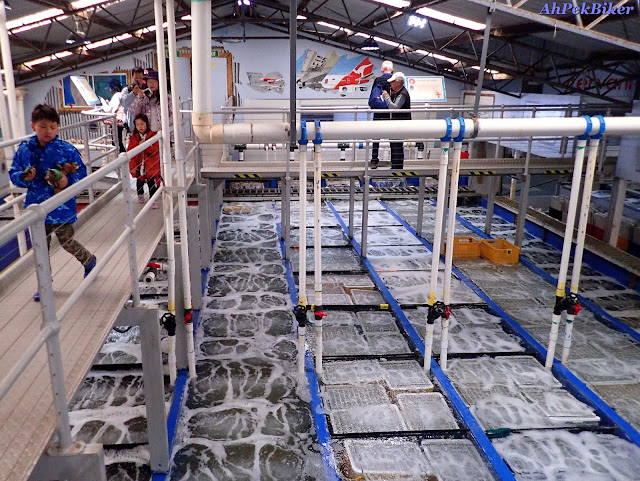 12:15 noon - At the Lobster Shack, even though our stomachs were eager to savour their delicacies, we went on a guided tour of their factory, walking through their "farm" with holding tanks for containing lobsters that were caught from the sea. There were also video presentations on lobster farming from the sea. 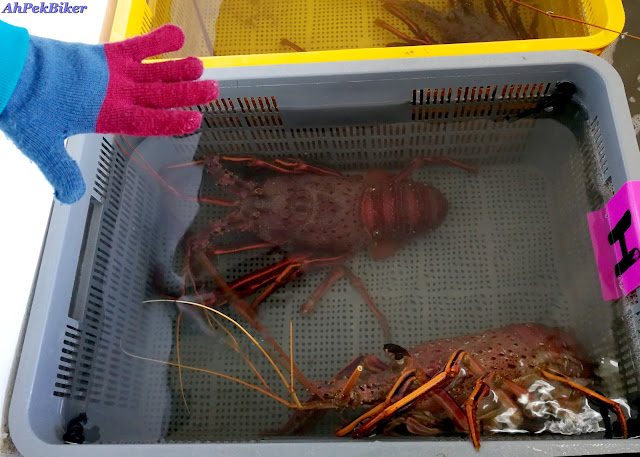 Wow! Some of the lobsters were huge! 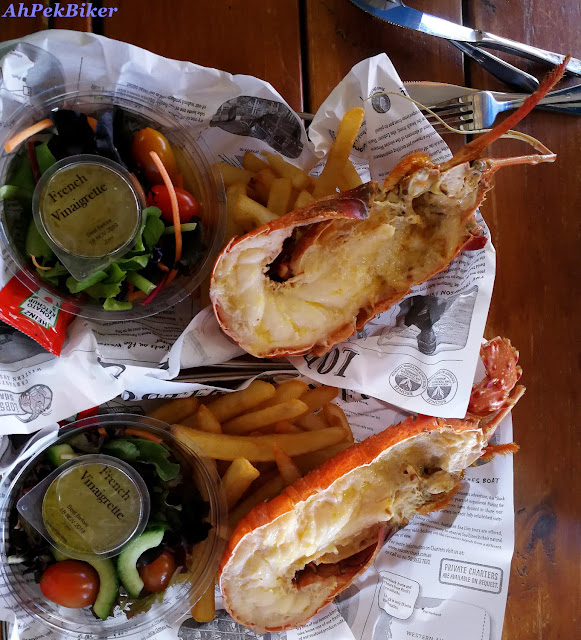 But when our lobsters came, they were a disappointment - each of us were given half a small lobster, they tasted good.... but ..... Hey! What happened to those big fellas we saw at the "farm".

The only consolation was from the car park they was a nice view of the blue sea with bordered by a white sandy beach.

Half and our later, it was a different scenery - instead of white sand, it was an orangish desert-like landscape dotted with lime-stone pillars sticking out from the gournd. This were the Pinnaccles with it's almost alien surrealistic landscape. Some of the tallest pinnacles reached heights of up to 3.5m above the yellow sand base.
The Pinnaccles Desert, located within the Nambung National Park, has been home to Aboriginal tribes for thousands of years. "It was believed that the Yuart tribe only knew a life of peaceful happiness living in this desert, teaching the children of the tribe to have great respect for the animals that shared the ‘land of crooked river’ (Nambung River). Their neighbouring tribe Mulbarrn was seen hunting on their land and as a result the Lords of the Dreaming would punish them. Consequently, each year tribes who traveled to the Yuart‘s land were vanquished. It is believed that each tall limestone replaced each enemy who lay dead on their land." 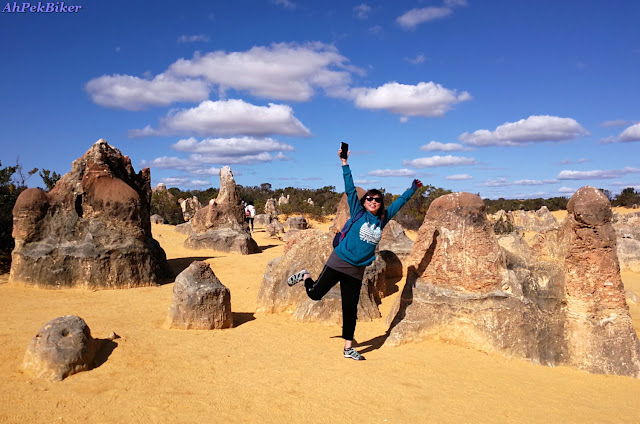 The contrasting colours of land and sky does make a good backdrop for photos. 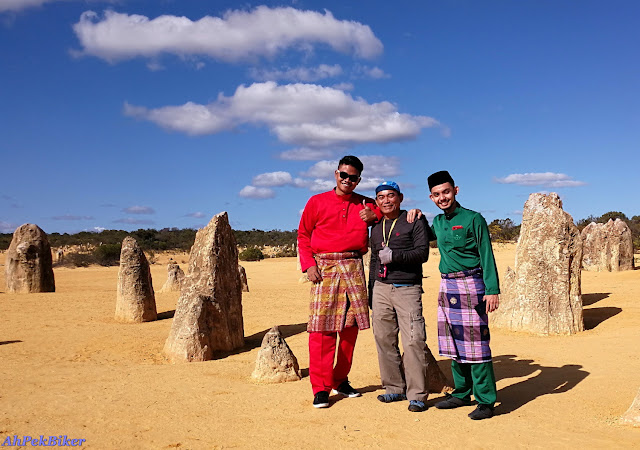 I met a couple of our fellow bus passengers who were from Malaysia. These guys were ingenious in bringing they colourful Baju Melayu, wearing them to bring out colours in their photos ..... don't ask me where they went to change their clothes though 😂. 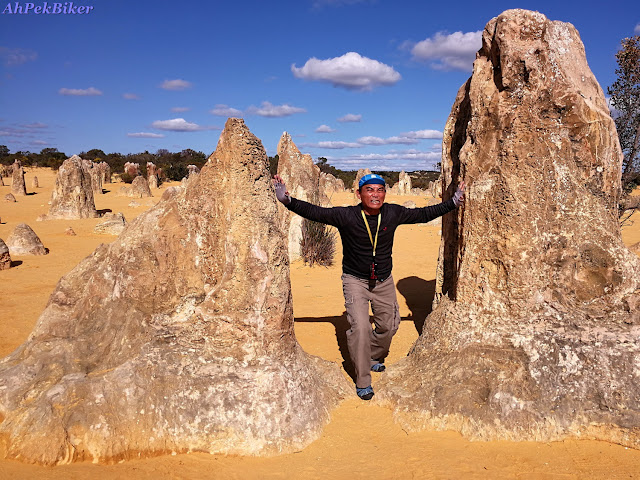 The rock formation gave lots of photo opportunities; here I am posing as Samson pushing apart pillars of the Philistines palace. I though I looked macho until a cheeky friend mentioned that I looked constipated 😣. Dang! Fortunately there was no Delilah around to witness a constipated me! 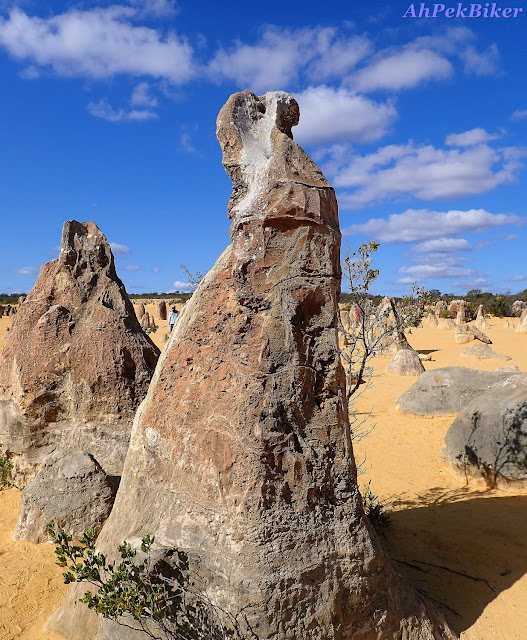 There are many rock formations here, and looking carefully some of them have interesting shapes; this one looked like the head of parrot with a pronounced beak ..... 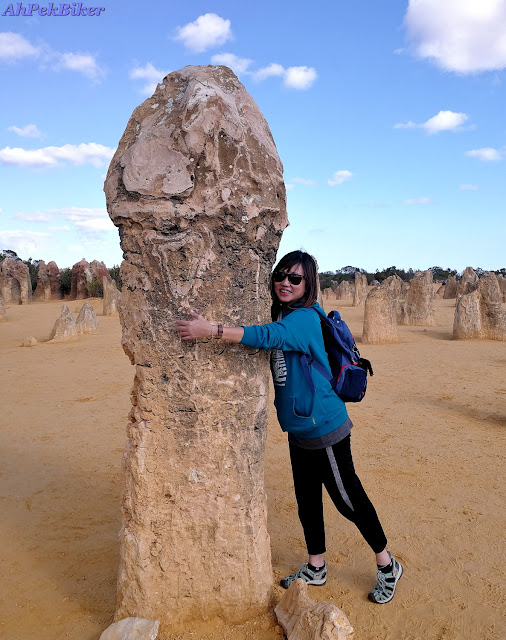 And this one looks like ..... er ..... looked like a rocket ready to be launched, now don't get naughty ideas 🤣.
Alternatively, some come here at night, the night views of the Pinnacles are out of this world too! 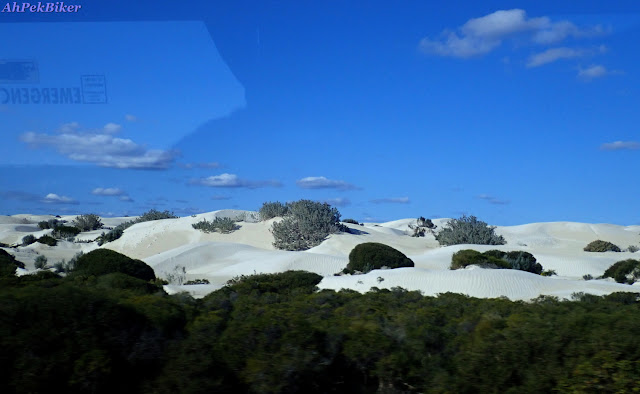 Half and hour later, we neared Lancelin. Peering out from the bus window we could see dunes of white sand stretching to the horizon. It's amazing, so close to each other were varied sceneries of different colours! 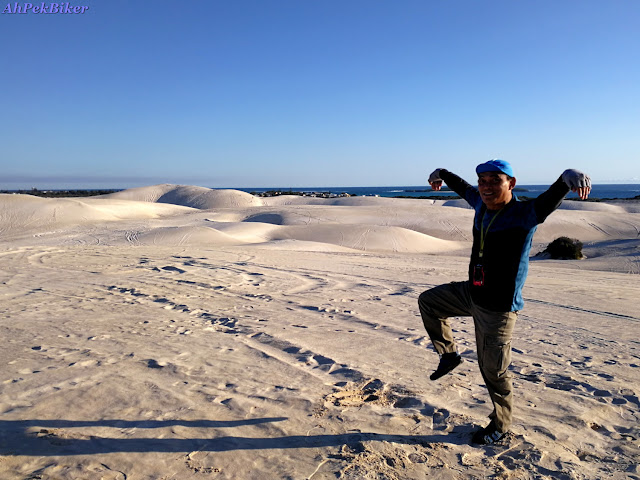 The dunes were right next to the sea, the white colour contr5asting with the deep blue of the sea and the bright blue of the sea. Time for some antics, this time a bit of Crane kungfu stance! It's a throwback to teen days when I was leaning Shaolin kungfu ... seriously! 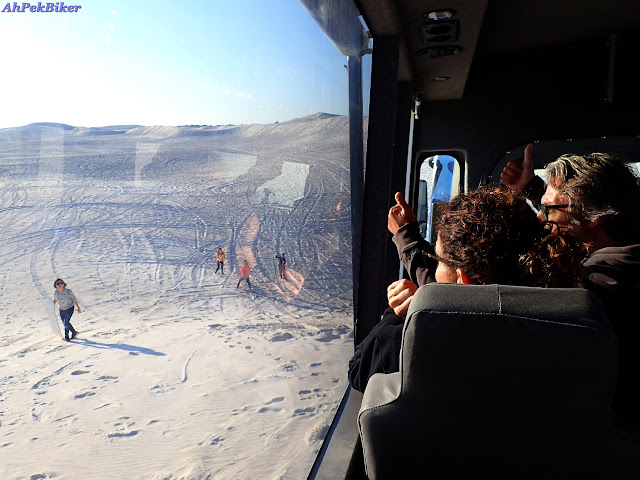 There are a couple of things that should not be missed at Lancelin; the first was a ride on a 4-W drive. The one we were 4-WD trucks converted into buses (see top-most photo). It was a thrilling ride as we went up and down the dunes. The down slope part was especially scary, with steep inclines up to 45°!
Hey! Girls..... better get out of the way..... and down we went .....Wheeeeeeee! 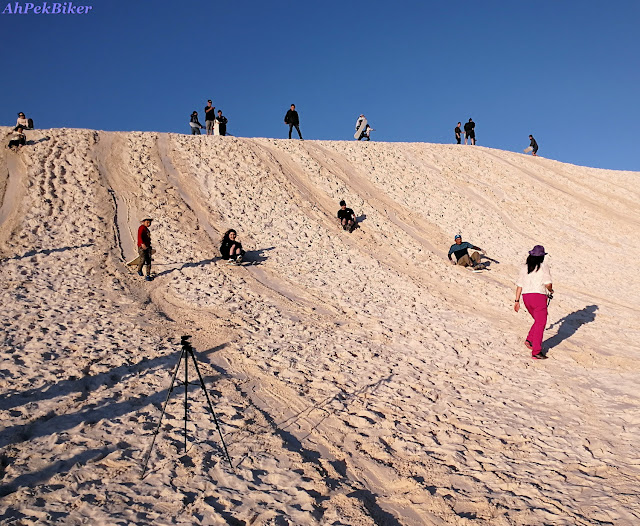 The next thing was sand dune boarding with sleds provided. One have to wax the bottom of the sleds provided, climb up to the top of a steep dune ..... and ..... Wheeeeee again!
It's easier than it looks; that's me at the far right, doing okay until 3/4 way down, I veered and went tumbling the rest of the way. 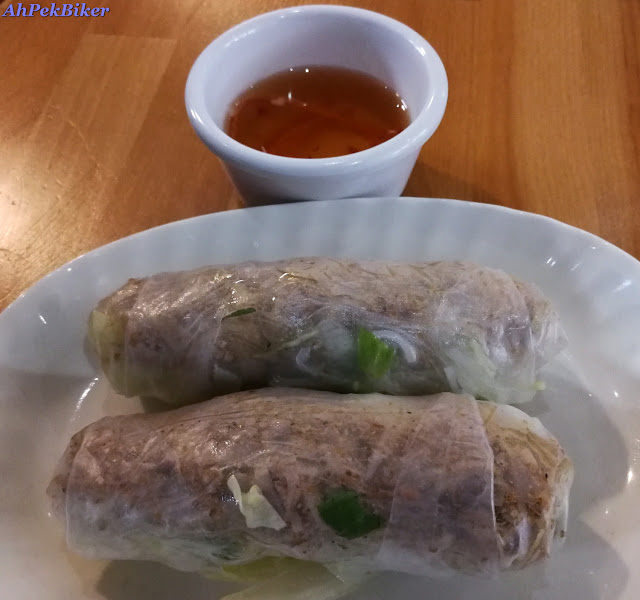 But the past days of enjoying fried food (like the fish n chips, lobster n chips) had taken it's toll on me. Without the countering "cooling" herbal tea, these "heaty" food had caused be to lose my voice. We opted for an Asian dinner at the Saigon Restaurant, having wantan noodles soup with these Vietnamese cold spring rolls (Gỏi cuốn). 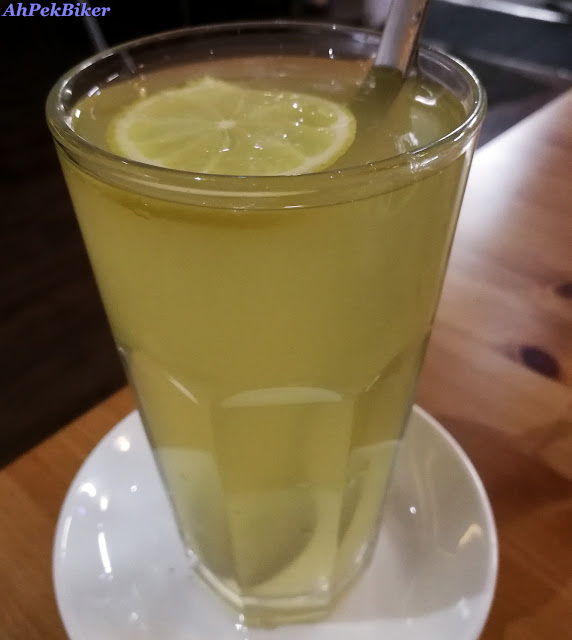 The lady operator on hearing my soft whispering voice, made this honey-lemon juice for me, stating that it would help me regain my voice ..... hopefully.