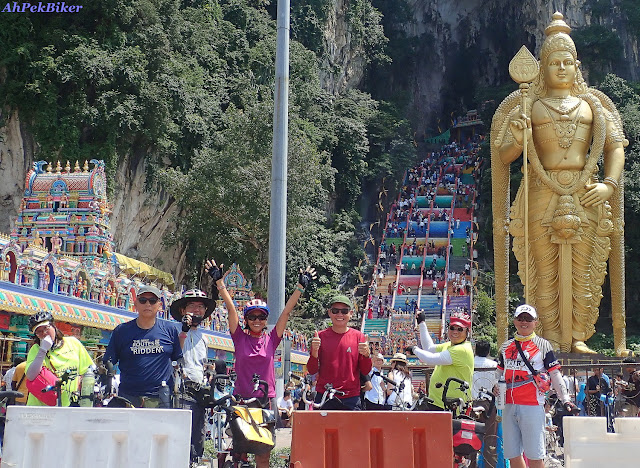 Today's ride was more about the destinations, so I will just run through quickly the route. Surprisingly it is a short and easy way 10 km. to get from Kepong to the city centre. Starting from Kepong Baru it cut through some of the main roads which were surprisingly light in traffic on a Sunday.

From there it through the slightly busier Segambut industrial area passing by several factories including the Tan Chong Motorworks where they had one of their Nissan cars put high on the entrance guard-house roof.
Cutting in from Jalan Segambut Utara into Jalan Ipoh (now called Jalan Sultan Azlan Shah) is quite tricky as the island at the Petron 3 1/2 Miles Jalan Ipoh is very busy. Instead of risking swinging across the bend to the petrol station, we went slightly further ahead and used the pedestrian crossing at leads over from Jalan Murai 1 to Jalan Pipit.

Instead of going straight for KLCC, we took a loop through Kampung Baru to Jalan Sultan Ismail, where we drop by at a couple of shopping complexes to view their Christmas decorations, and then cutting to through Jalan Conlay to use the quieter residential roads there. Here, a surprise awaited us - an old colonial bungalow that housed the Badan Warisan Malaysia (Malaysia Heritage Board), next to it was an interesting old Malay house called the Rumah Penghulu Abu Seman. This is one of the oldest surviving traditional Malay houses. Built in stages between 1910 and the early 1930s, it was owned by the penghulu (local village headman) of Bagan Samak, Kedah. Originally located in Kampung Sungai Kechil, a small village in the northern part of Peninsula Malaysia, it was rescued, relocated and restored (around 1996-1997) by Badan Warisan Malaysia.

Today, it stands as one of the finest remaining examples of Malay vernacular architecture. Located in the heart of Kuala Lumpur with its many high rise buildings, it is surrounded by a traditional herb & heritage garden which has over 50 species of trees & plants of environmental, cultural & historic interest to Malaysians.

At Kampung Baru is a renown stall that sells cendul durian, a wonderful mix of cendul, one of Malaysia's favourite dessert, combined with durian, the King of Fruits. This well preserved Malay village situated right in the heart of the city has a plethora of good food, among them nasi lemak sold at Wanjo. Click on this blog for other culinary offerings at this kampung.
Other renown food along the route includes:

It's a festive time at malls in the city: in front of Lot 10, a Iced Polar Bear stands tall amidst lilac coloured snow Christmas trees.

Over at Pavilion, the entrance were lined with Christmas trees, but inside the mood was even more gay with bright tassels, ribbons and big boxes of Christmas presents hanging down from the tall ceiling.

Stepping down to a lower level, a giant Mickey Mouse in his classic howdy pose greeted us.

Next to it was a HUGE pseudo-Christmas Tree with many tiers, each displaying small statues of Mickey Mouse.

A close up look at the Mickey Mouses, each dressed distinctly in colourful costumes and some having different colour bodies or ears.

Around the tree were larger figurines of Mickey, these about a foot tall each - again they were in different bright colours and uniquely coloured costumes.

Before going on, let's detract a bit. I have just bought on of those Spin foldable helmets from Taiwan. Hopefully, with this colourful helmet I would blend in with the comic characters.

The helmet really folds compactly to about 3 inches wide by 2 inches tall. Although they may not be as strong as standard helmets, their compact fold make them suitable for touring.
I got it from the online https://www.facebook.com/lovevelo/, click on the link to see the full range of their helmets. Price ranges from 990-1290 Thai Bahts depending on the model.

This Comic-Con was actually the 2018 Malaysia Comic Fiesta. It was held over the weekend of 22nd-23rd December at the Kuala Lumpur Convention Hall. But there was no need to enter the hall; just outside along the pathways next to the KLCC Park many participants were mingling around. They took they participation seriously as most of them were dressed to the nines in their favourite comic/manga/anime characters.

This character is Retro of the Dead Leaves anime series.... I think it is as I am not really into anime and manga... although I like the colourful characters outstandingly portrayed by the comic artists.

I am more old school, more into the Marvel and DC-dom universe; so most happy to meet this familiar Flash character.

This scary looking fella is Admiral Perry of the Space Dandy series.....
er, I think it is; I will try to identify some of the characters I met, if I get it wrong I do hope someone will correct me.

Another scary one, a red-robed black masked fella who looked like he just stepped out from on of the many Chinese hells.

I mingled around, taking photos with the participants and at the same time trying to stay in character and immerse myself into their universe.

With a French Au Pair, trying to act young with this jeune fille.

Cozying up to some hilly-billy characters... Hmmm... they remind me of those patchwork dolls.

Fists up with the Sailor Moon heroine.

Ok... I am stumped by this one; perhaps she is one of the Witches of the East.

This one should be one of my favourite, a link to an alternate world. He's Jotaro Kujo, and in FB-verse I am known as Jotaro Zen!

Looking up with scary awe at Lancer of the Fate series.

Chow Sing Chi kungfu pose with Onimaru Kunitsuna; she's really in character, maintaining her serious look without flinching, despite being agitated with my comical stance.

Spidey stance with my favourite cartoon character Spiderman. At my sides are Venom and the Storm.
As Mary Jane Watson would say "Go get them, Tiger!"

With a Transformer character, this time my bike came into play as I showed them how a six-foot Brompton bicycle can transform into a package of two by two feet.

Magical pose with Mera, the better half of Aquaman. She's hanging near to the Simfoni Pool, just in case she needs to go for a dip to freshen up.

Click here for a Relive of our Kepong to KLCC Route.
(For more photos of the day Click Here)


You are at - Jotaro's Blog / AhPek Biker / Cycling Malaysia / Kuala Lumpur / From Kepong To KLCC - The Christmas & Comic-Con Ride
If you like this, view my other blogs at Jotaro's Blog
(comments most welcomed below. if you like this pls share via facebook or twitter)
Posted by Jotaro Zen at 12:05 AM