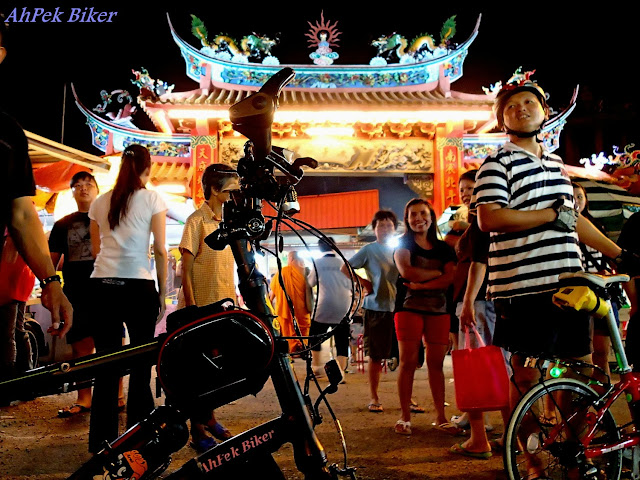 Route Recommendations :
1. The route is relatively flat.
2. Point of interest is the Korean Embassy and the 9-Emperor Gods Temple in Ampang.
3. Highlight of the ride was viewing the temple procession.

The 9-Emperor Gods festival was approaching, and one of the highlights of the festival was the procession to go invite the Emperor Gods from the lake. In Kuala Lumpur, this starts from the 9-Emperor Gods temple in Ampang down to a nearby lake where the gods are invited up a chariot and then the procession returns back to the temple. This procession is carried out a few days before the actual festival day.
This will be an interesting affair to see as it has been ages since I attended such a procession. In fact, it was like historical times to me, as the last time for me was decades ago when I was a small kid. So when Tailim suggested a ride to see this procession I was eager to join. 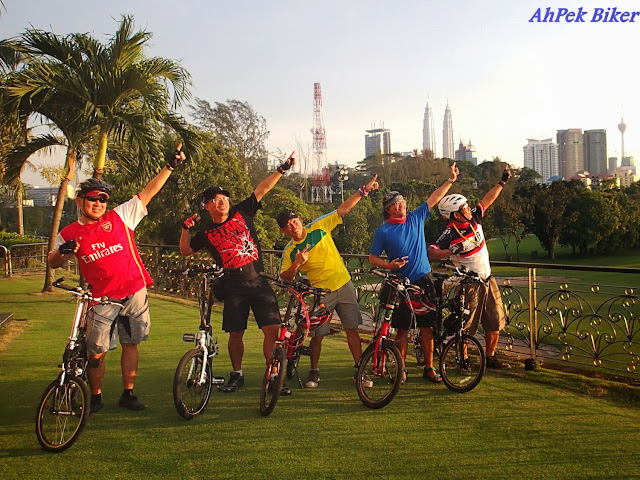 Starting off from the Titiwangsa Golf Club, the five of us did a classic Olympian Bolt-style pose to boost our spirits for the ride. This is a favourite spot for our group photo as the Petronas Twin Towers and the KL Tower can be seen in the background. 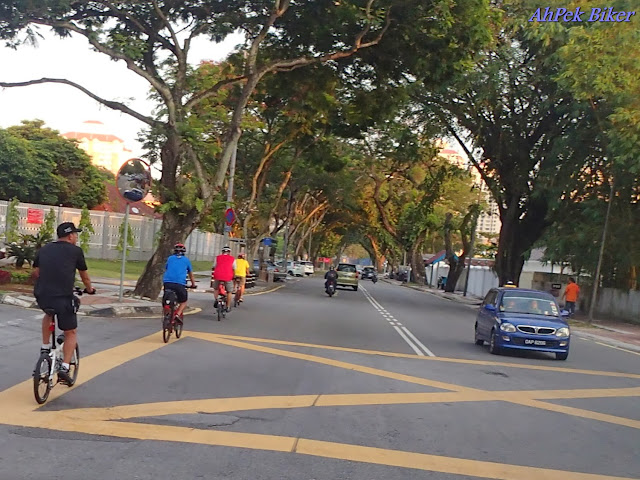 This time round Harry will be assisting Tailim in leading the ride as he is familiar with the early stretches of the ride. From Titiwangsa cutting through some "restricted zones" (of which Harry has permission to go through) we were soon riding along the Jalan Semarak area. 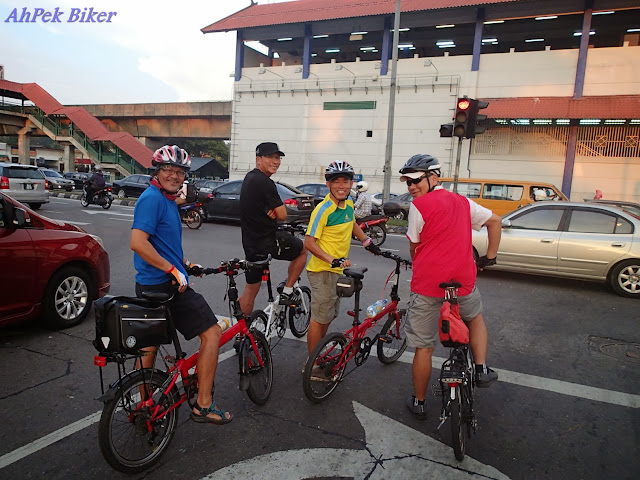 We are avoiding the evening office rush traffic and are using the residential roads, from Semarak we proceeded to the Dato Keramat area. Here we are at the Keramat LRT Station. 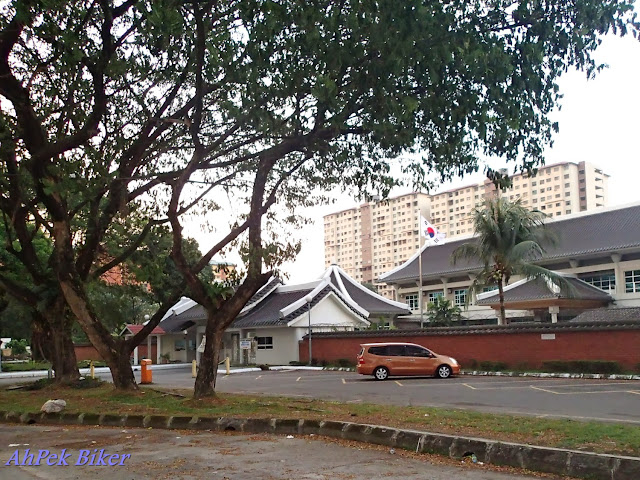 En route, we did a swing pass the Korean Embassy. It's a relatively new building with nice Korean architecture... 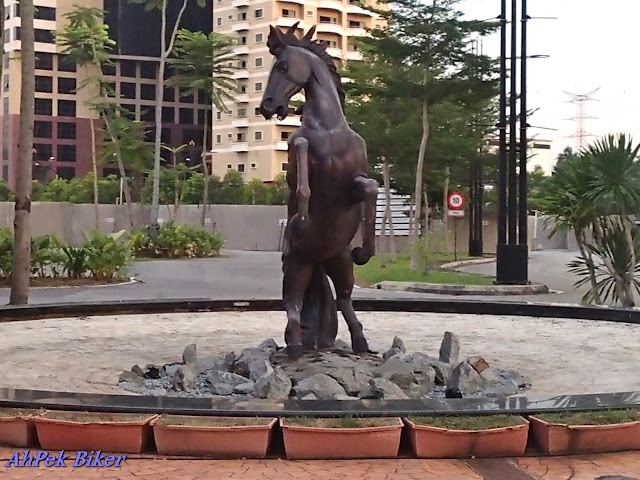 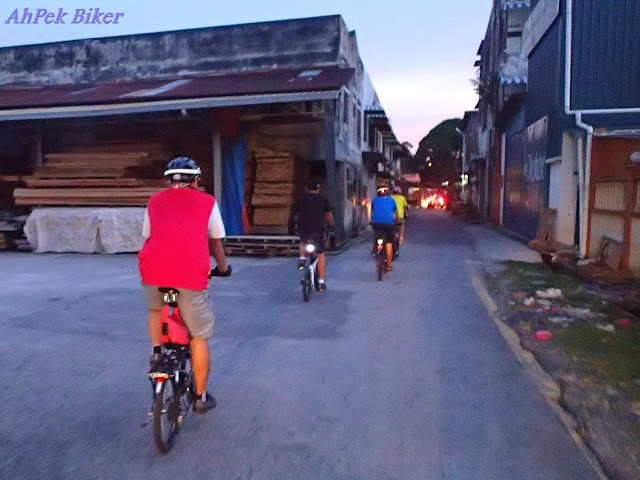 Although we did ride by some interesting side and back alleys, the route itself was quite uneventful. It was the destination, or more the idea of seeing the procession event, that is tugging us on.

Reaching Ampang Old Town, we had dinner at a simple restaurant called Kah Heong Taste (translated it means Added Flavour Taste). The dishes here were good, just like it's name, the food was additionally flavourful!
The delicious food was a good way to pass the time while waiting for the procession to arrive. 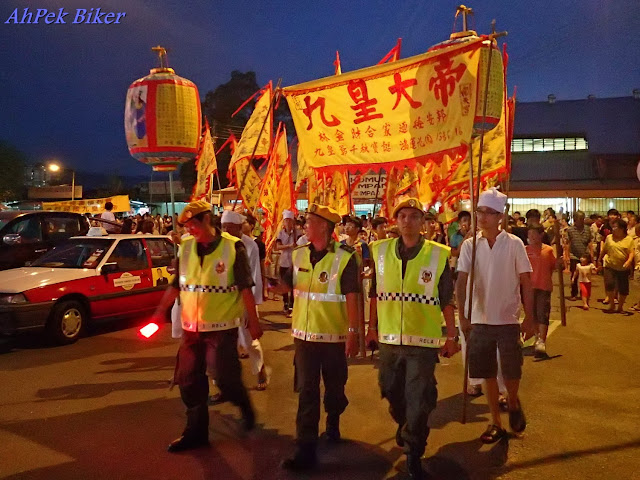 Half way through the dinner the procession arrived! We postponed our half eaten dinner and rushed out to see the procession - Well, one can't time eating and viewing accurately. As it was a very long procession (about 2 km. long), by the time we got back to our dining table the food was finished by the others. But no regrets there as viewing the long and eventful procession itself sated our appetites.
The start of the procession were some pennants and flags carried by devotees with volunteer police clearing a way through the crowd for them. 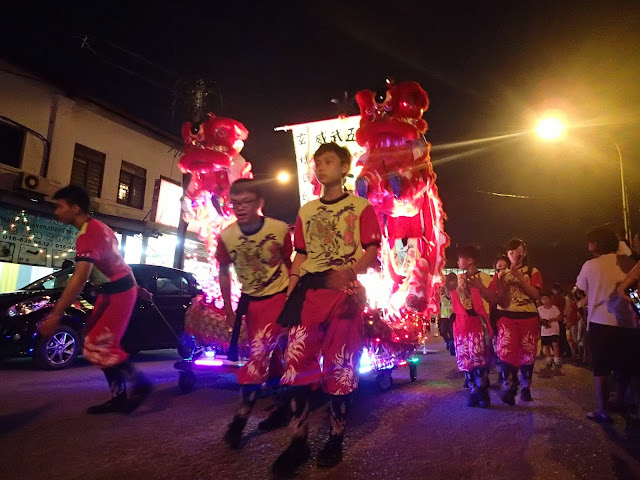 This was followed by brightly lighted floats representing various associations, some were manually pulled along, while others were motorized. 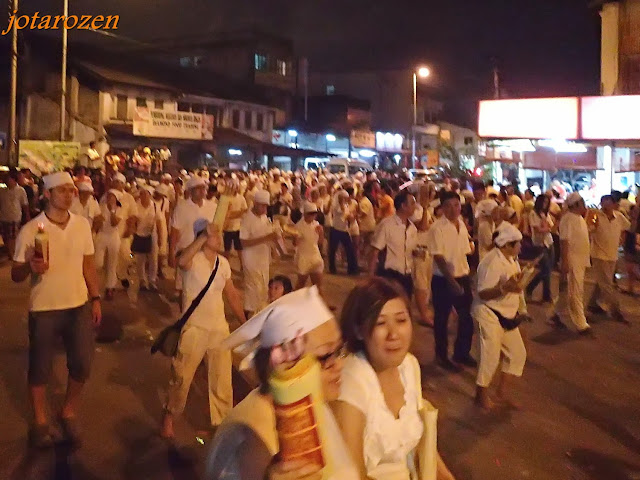 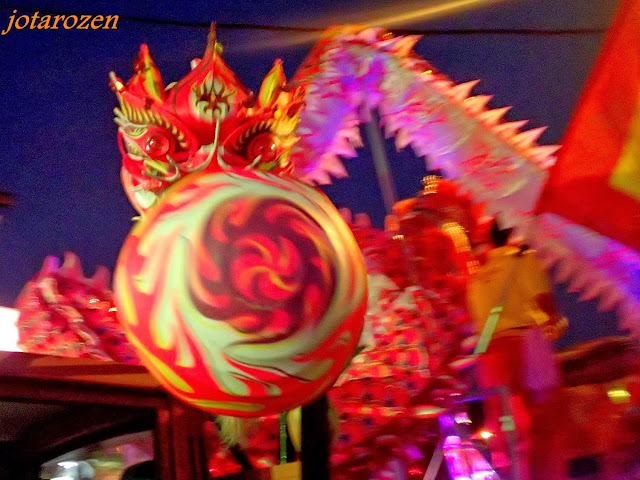 Unlike most processions, there were a few dragon dances, like this red one of a dragon chasing the moon. 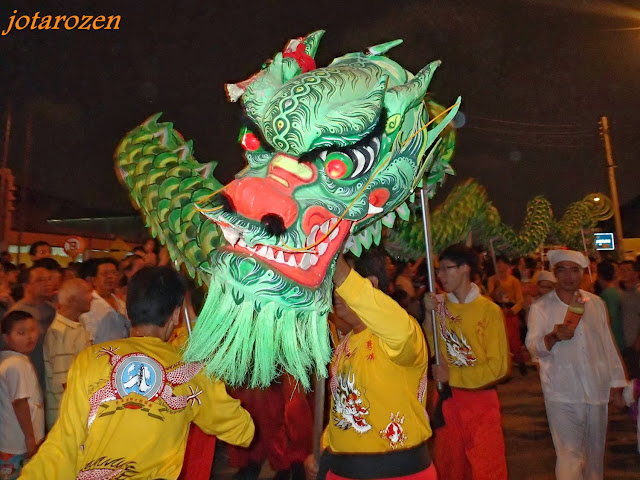 And this green dragon with a striking head. 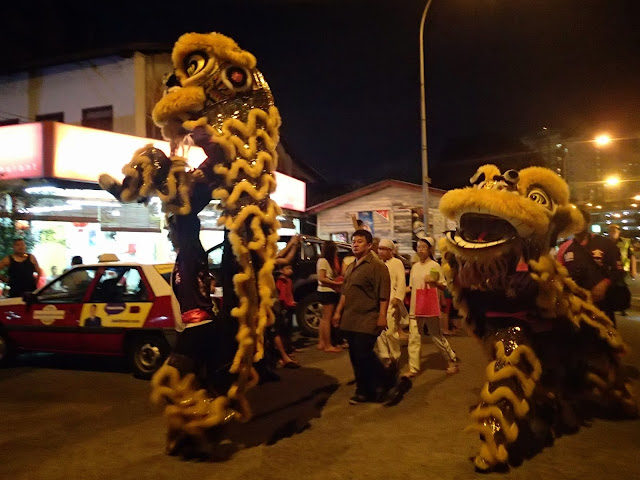 There were even more lion dances, so many that I lost count; and of different colours, green lions... 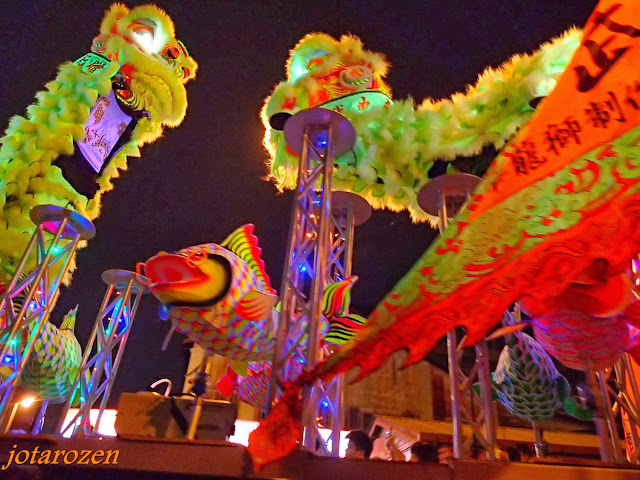 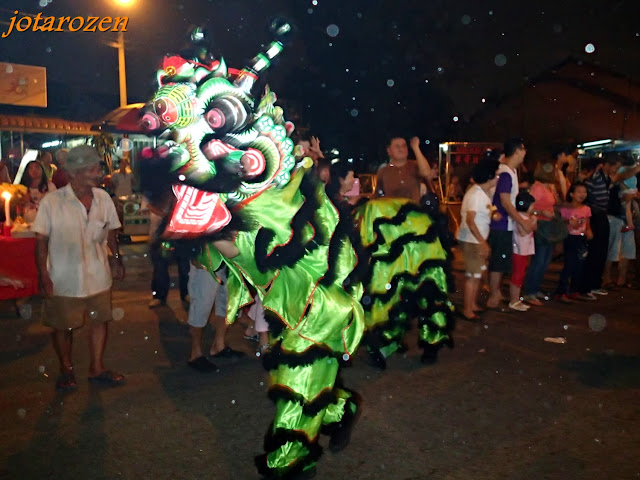 And even the rare Qilin dance. So rare that this is the first time I am seeing one. 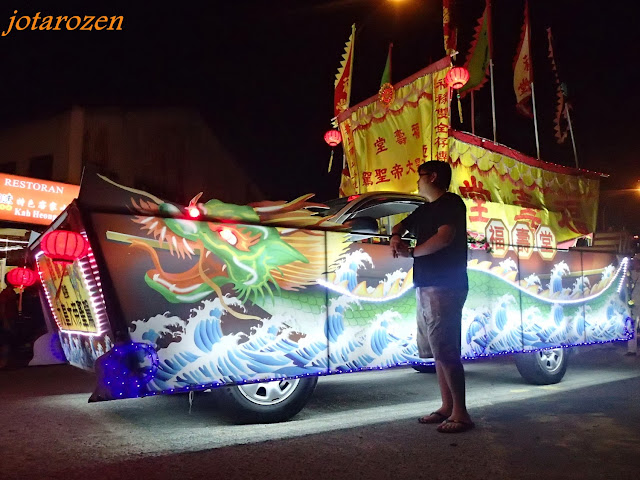 More lighted floats, this one with a green dragon emblazoned at its sides. 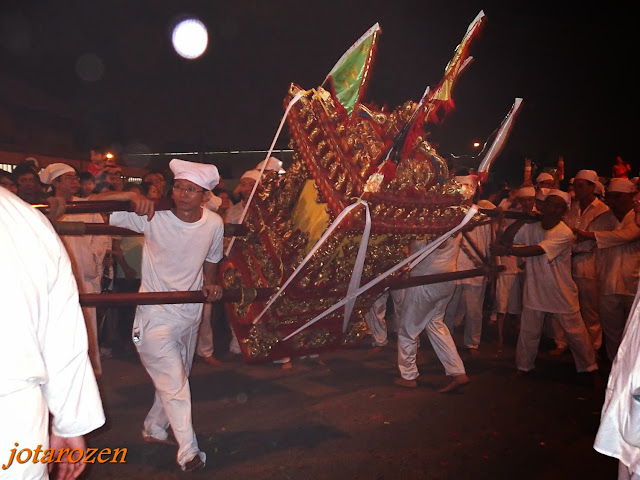 On the return journey, the gods have been invited to onto palanquins. Devotees took turns to carry these palanquins, rocking them from side to side, back to the temple. 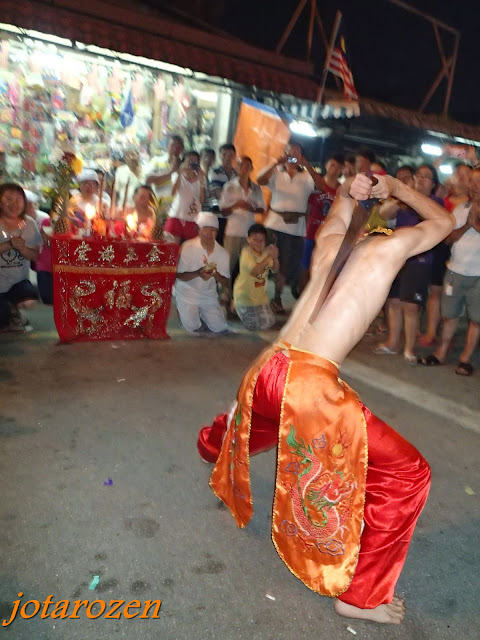 At a make-shift roadside shrine, devotees in a trance did penance for blessing by cutting themselves with swords. 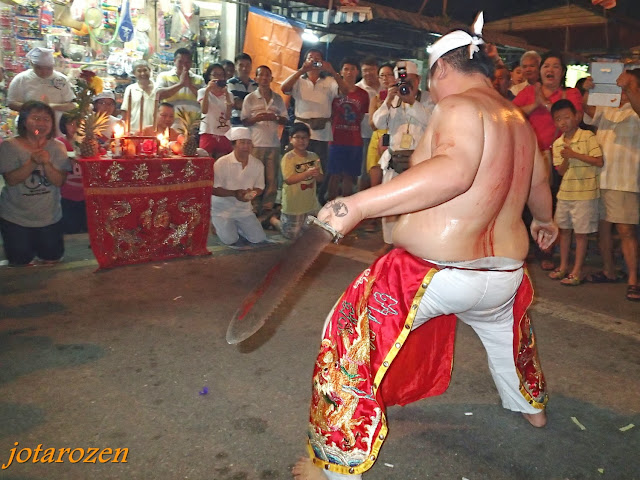 Some went to extremes and really did cut themselves, in their trance they were oblivious to their bleeding (... see more at Nine Empeeror Gods Procession - coming soon). 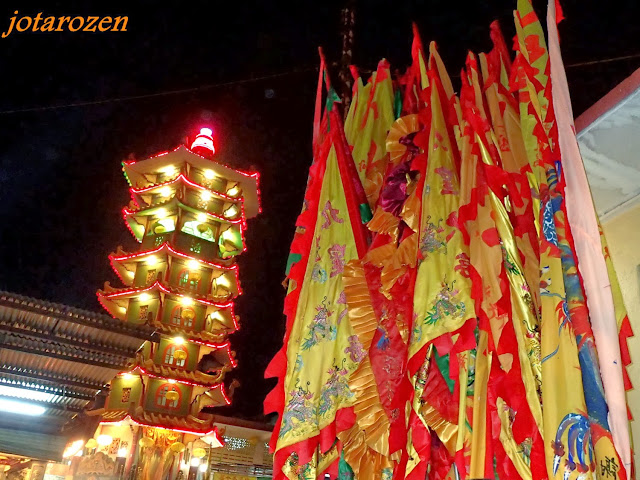 With the completion of the procession, we went into the Nine Emperor Gods Temple itself to look around. It was not the actual day of the festival, but then there were already many devotees attending to rites and prayers. 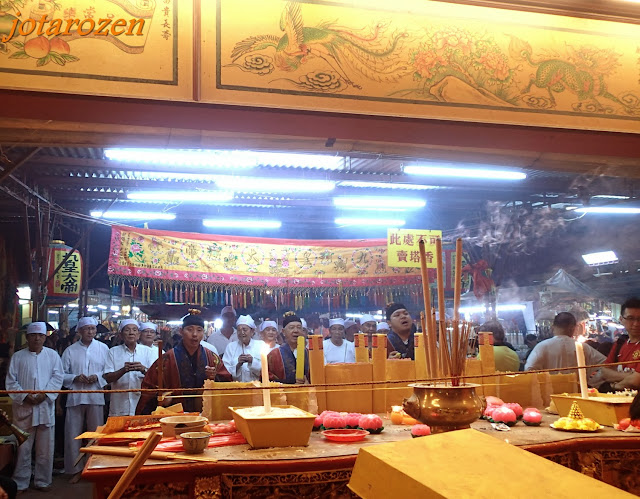 Priests and devotees from the procession continued on to pray at the main altar.... 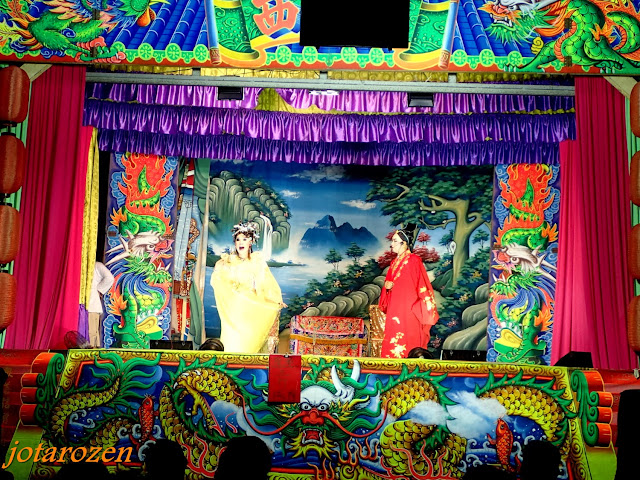 At one corner of the temple grounds was a small stage where a Chinese Opera Show was being performed to entertain devotees (... see more at Nine Emperor Gods Temple Festival blog - coming soon).

We mingled and milled for a while and then left the temple to ride back.

(To see more photos of the procession, click here) 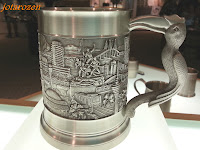 Royal Selangor Pewter - Kuala Lumpur Malaysia
A company with over a hundred years in the business of pewter manufacture,
it is now the largest producer of beautiful pewter pieces, from tankards to jewelry.

You are at - Jotaro's Blog / AhPek Biker / Kuala Lumpur / Cycling Malaysia / 9-Emperor Gods Ride
(comments most welcomed below. if you like this pls share via facebook or twitter)
Posted by Jotaro Zen at 1:22 AM