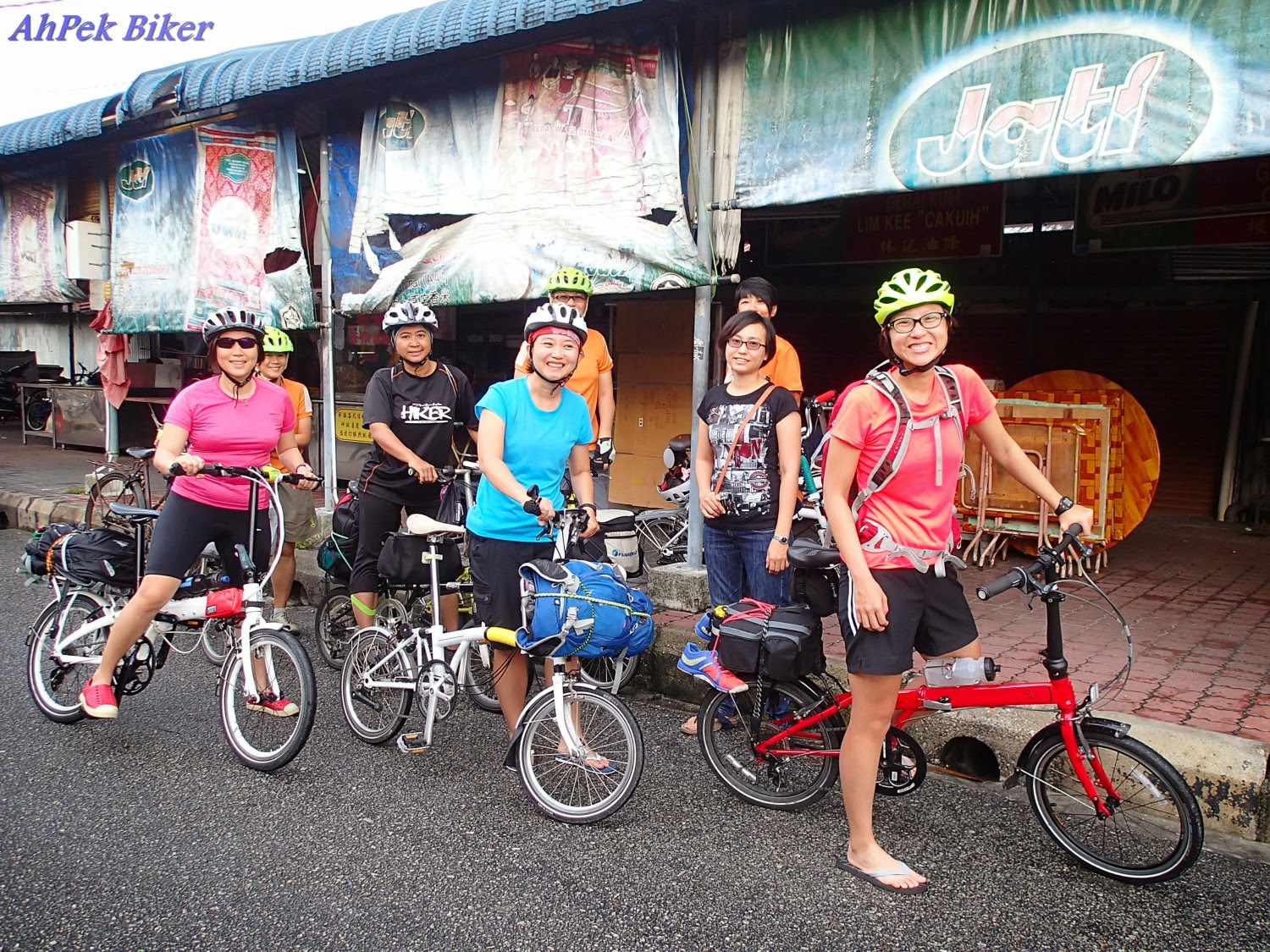 
Cycling Route: This is a quick stint around down-town Teluk Intan to grab some breakfast, view the renown Leaning Clock Tower and do some shopping for biscuits. After cycling around the town; the younger ones will ride to Kampar and take a ETS train back to Kuala Lumpur.
The previous day's riding under the alternate scorching heat and torrential rained had zapped the older ones, so we will just leave it to the young 'uns to continue the riding adventure. Us? How did we get back to Kuala Lumpur... well we had our means... heh! heh! 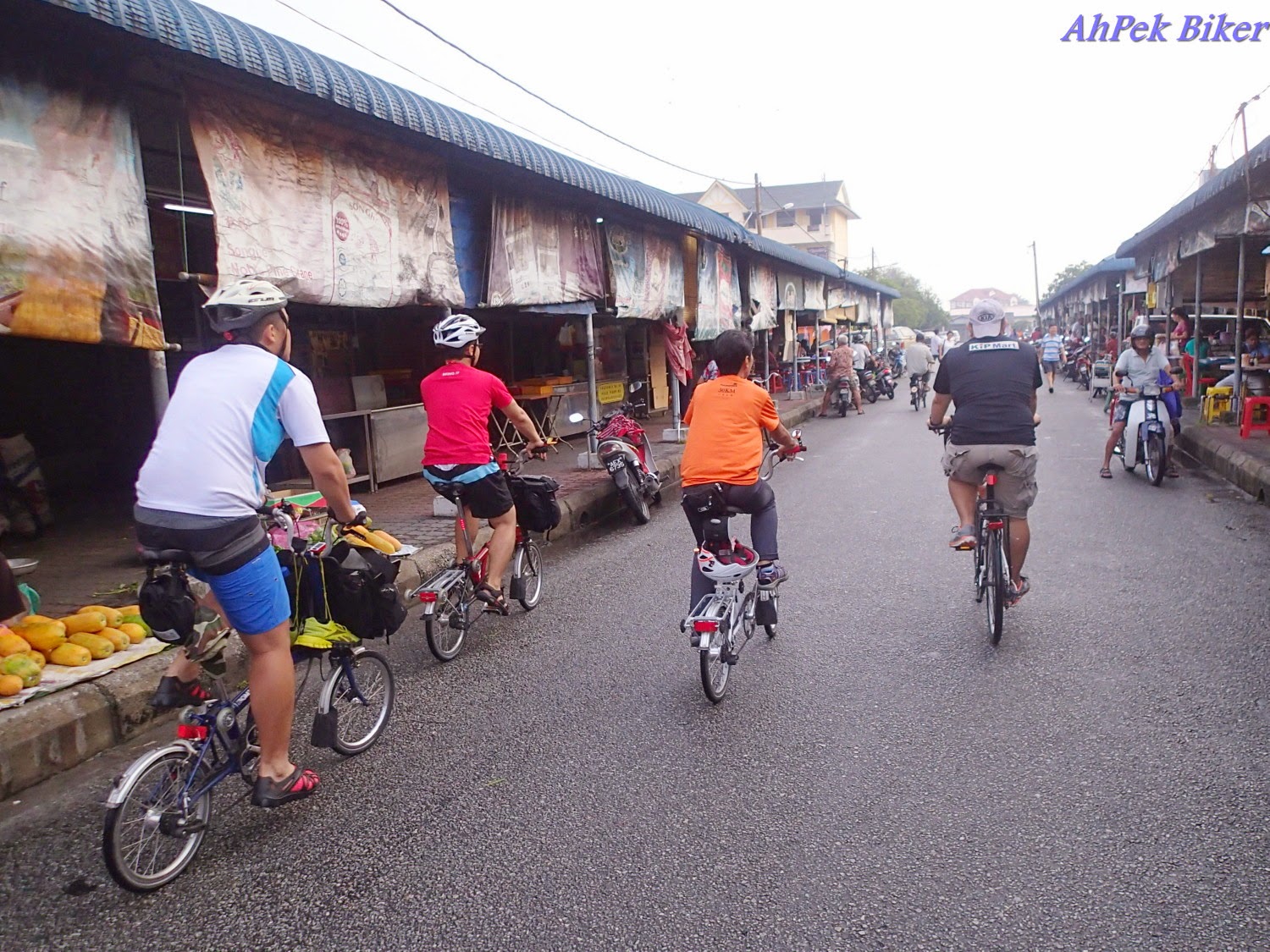 Here we are cycling down Glutton Street in Teluk Intan looking for a suitable stall to eat. The one selling beef noodles that we wanted to try was closed, so we had to settle for "less". 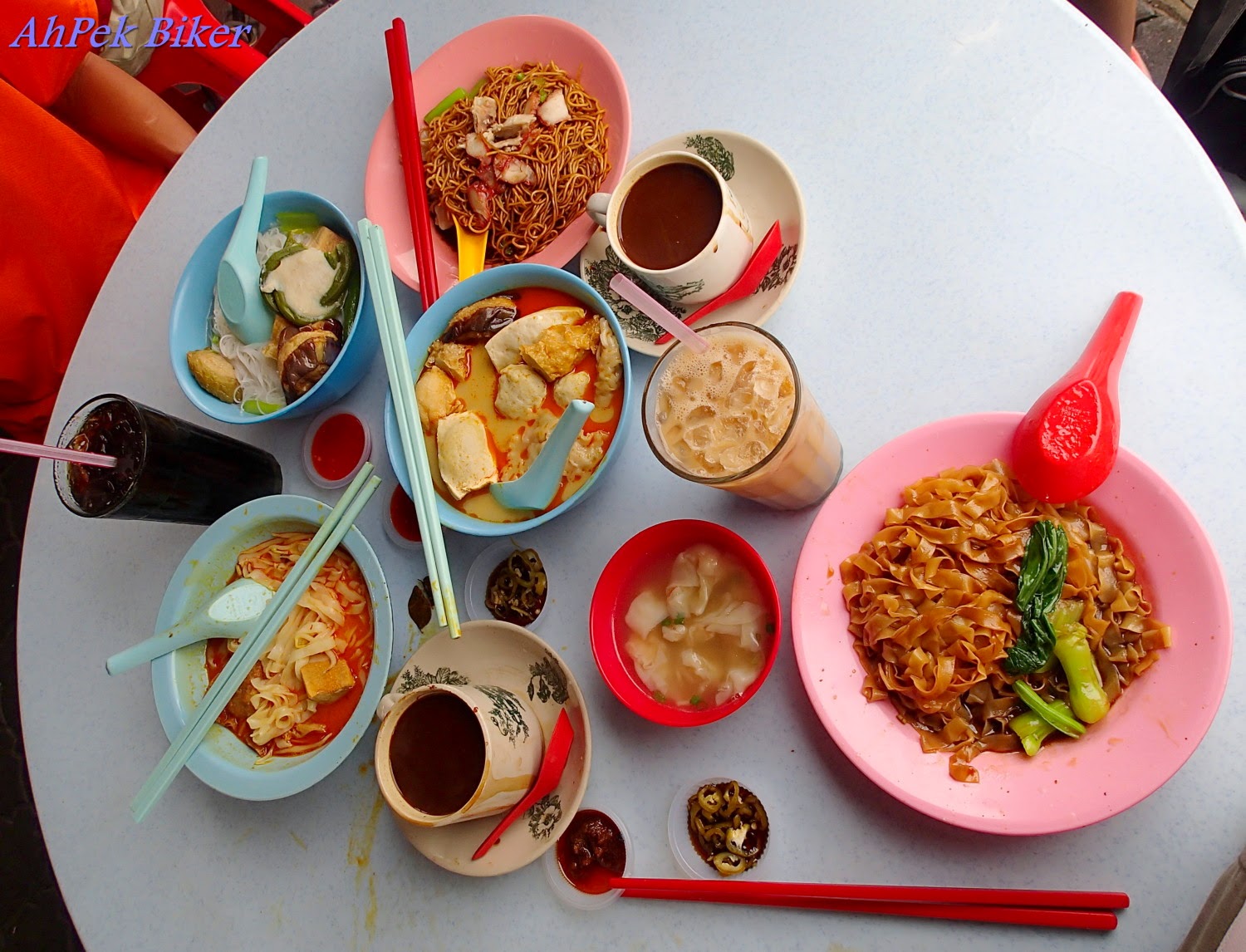 "Less" wasn't that bad, in fact it was pretty good. We ended up having some good dry "kon loh" wantan noodles and some Curry Yong Tau Foo together with fairly good coffee and tea.
The wantan noodles were good, with the noodles of the springy QQ type. Mine was the wide flat noodles with some curry added. The Yong Tau Foo was respectably good with the fish paste really tasting fishy - Hey! Teluk Intan is fairly near the coast so one should not expect less. 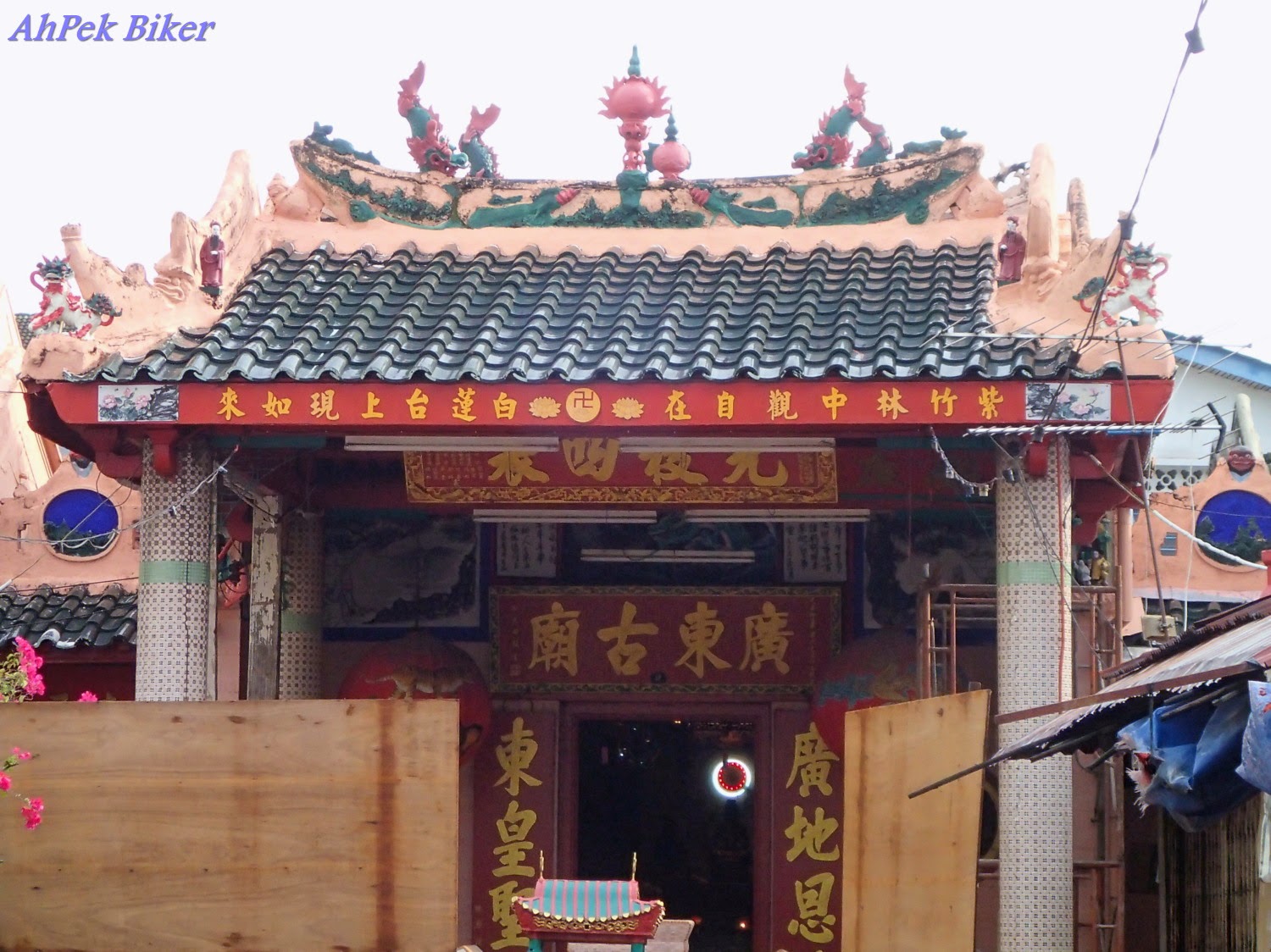 The problem with eating Ala Street is that many street food area don't have toilets around. Nature called so I asked the stall owner whether there is a toilet around. There was none at the glutton street but there was one at a small temple around the corner.
My natural problem turned out to be a bonus, as it gave me a chance to have a quick look at the temple, the Hock Soon Keong Temple. It's a small temple, under renovation and was rather deserted, i.e. no devotees praying there. 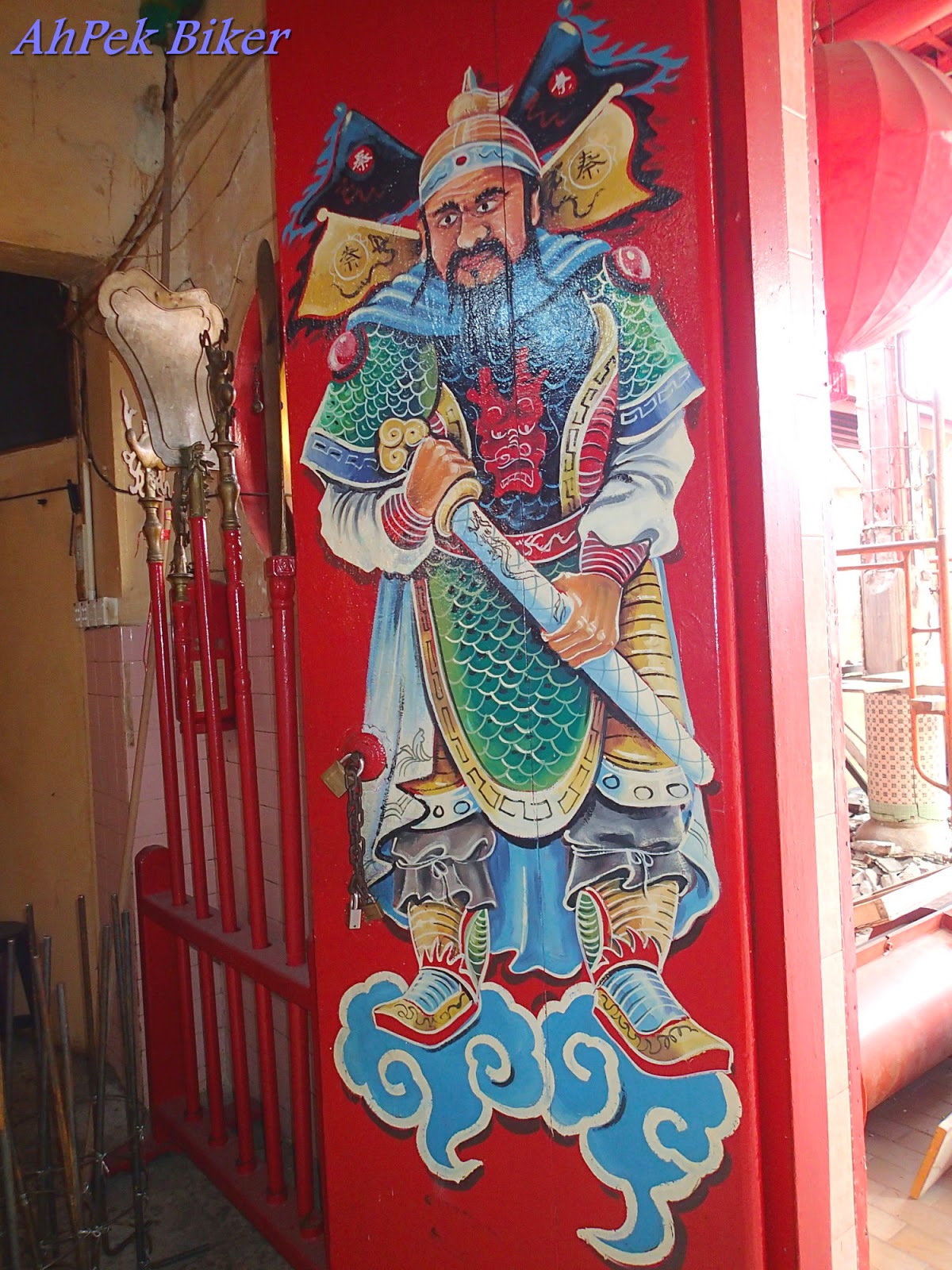 I was a bit concerned about being all alone in the temple and hoped those temple guards painted on the entrance doors will protect me while I answered nature's call. All was good and I left after saying my thanks to the guards. 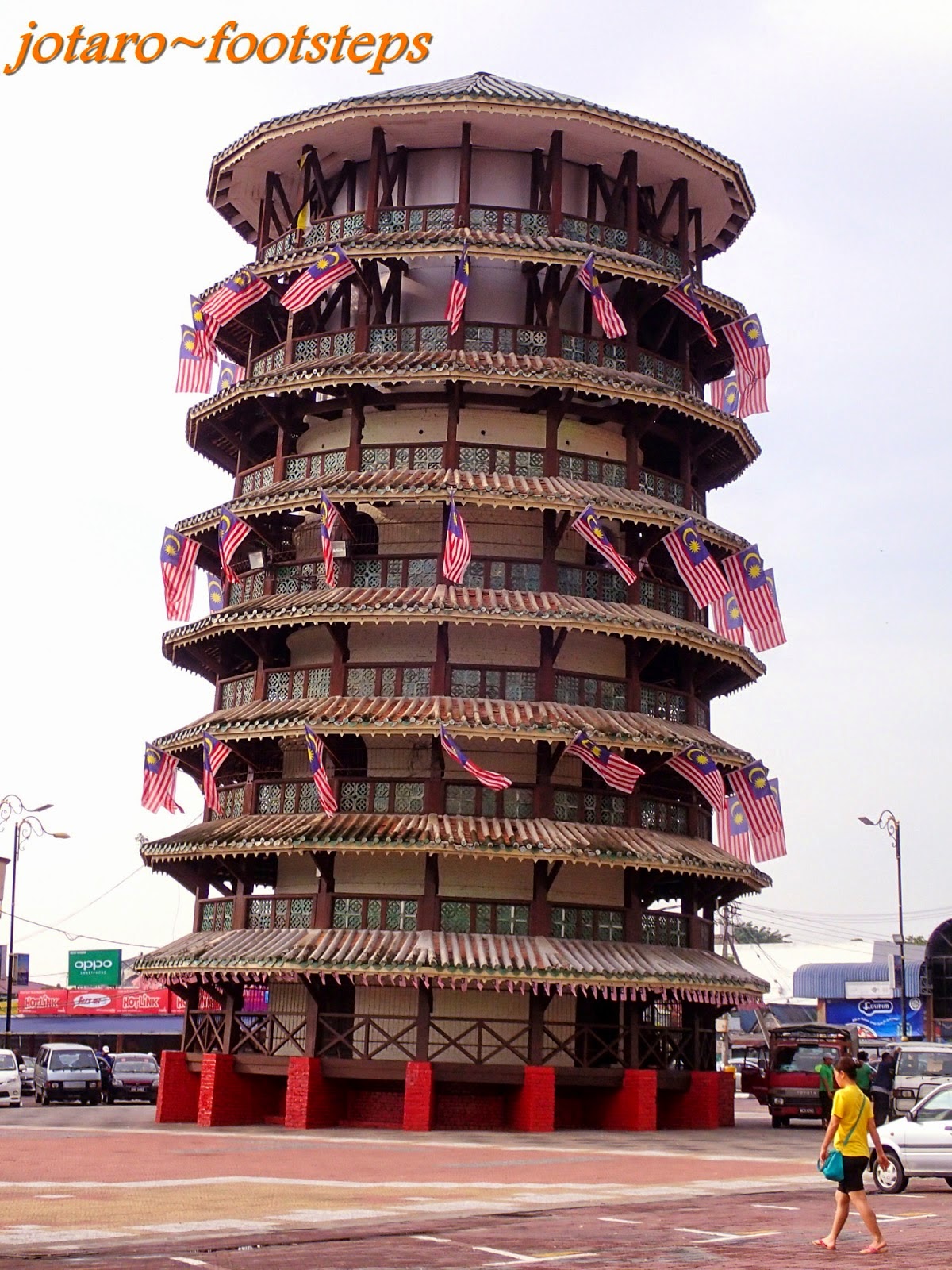 Stomachs sated and bladders eased, it's time to see the town.
First of course will be the famed The Leaning Clock Tower of Teluk Intan. We parked our bicycles and had a good view from outside before going in for a view. The tilt of the tower is most pronounce when viewed from the junction of Jalan Bandar and Jalan Ah Cheong, near the Hong Leong Bank.. 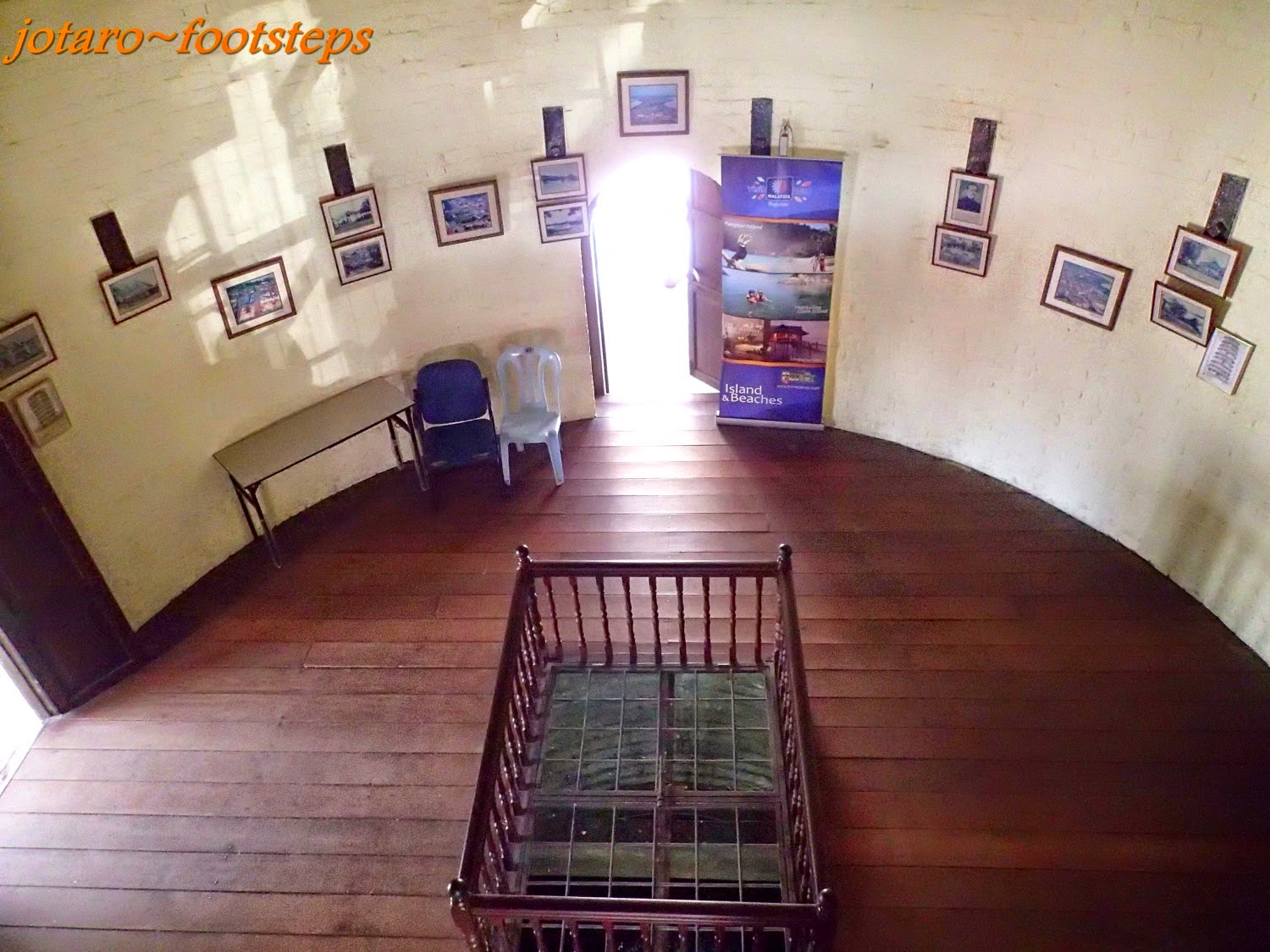 Inside, at the ground level is a museum of sorts with photos and write-ups recounting the history of the tower. The Perak River, back about a century ago, was deep enough for small ships to come up-river to the town. Teluk Intan was a fairly busy inland port back then, and the very visible clock tower acted as beacon for the ships.
At the ground level is also a well which is still filled with water. Back then, water from this well was pumped up to the tanks at the top-most level and the tower was a reservoir until it started tilting. The well is now a wishing well for visitors to throw in coins and make hopeful wishes. 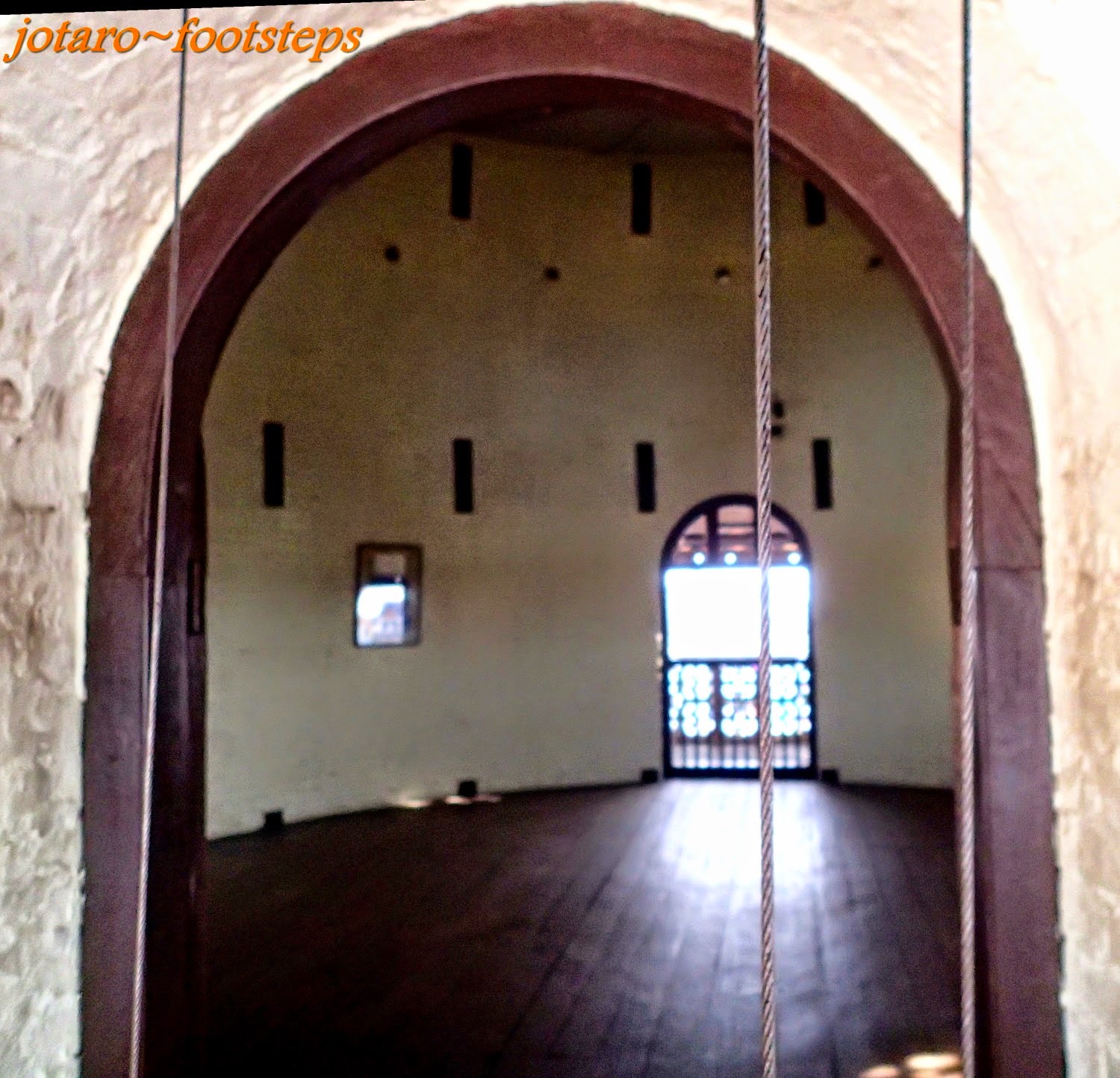 The water tanks are now empty but the tower is still an operating clock tower, its clock working along the principle of a Swiss Cuckoo clock. At mid levels of the tower, the cables holding the weights of the clock shows the pronounced tilt of the structure. From the top there is a good view of the surrounding houses, which I believe has been kept to not more than three-storeys high.
(... read more at Leaning Tower of Teluk Intan blog) 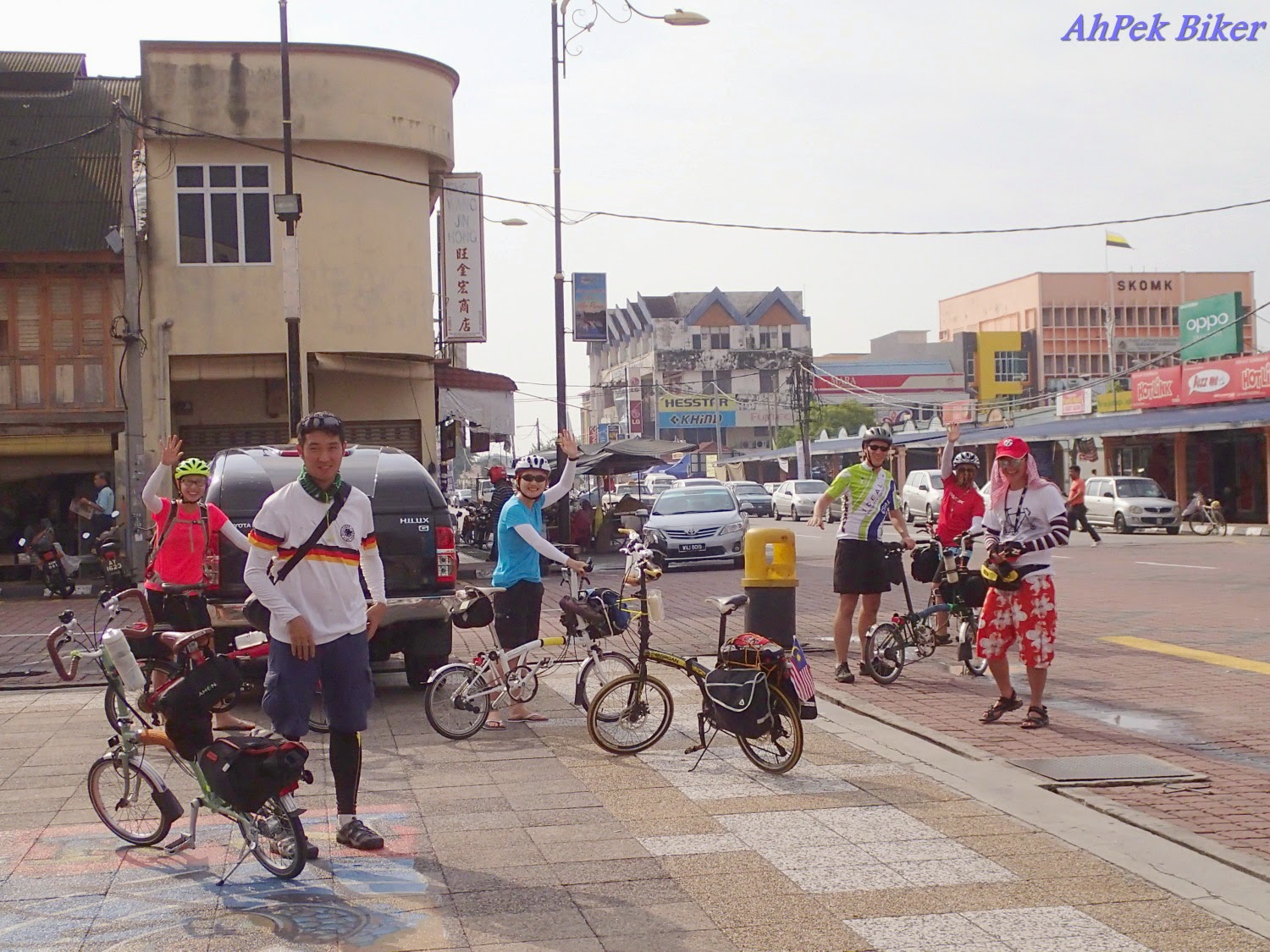 9:30am - It's time to say goodbye to our younger friends; they will be riding via kampong roads to Kampar and from there take the ETS train back to Kuala Lumpur.
Ride Well & Ride Safe, my friends! 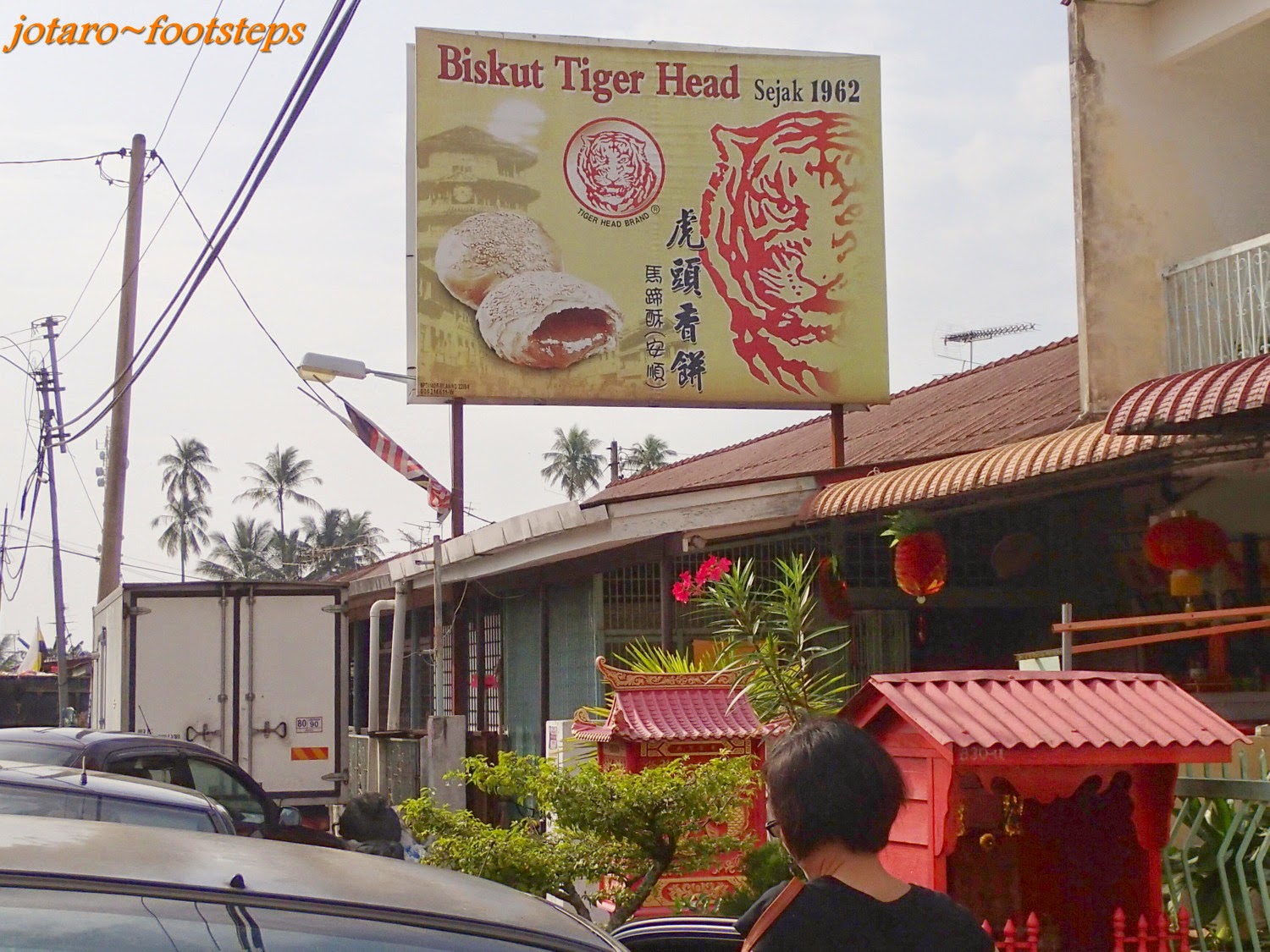 Over the years, I have enjoyed eating the Tiger Head "Biskut Kosong", these are semi-spherical, crispy biscuit with nothing inside; just layers and layers of crispy skin - empty biscuits as the name implies. Without the usual sweet molasses inside, it goes very well with hot black coffee.
I have always bought these biscuits from elsewhere. Knowing that they are manufactured in Teluk Intan, it was time to make a short cycling pilgrimage there. I am that loyal a fan of the brand!
The factory was in fact and timber house at the old quarters of the town, quite near the river; so my "pilgrimage" turned out to be a good ride through the quaint area. 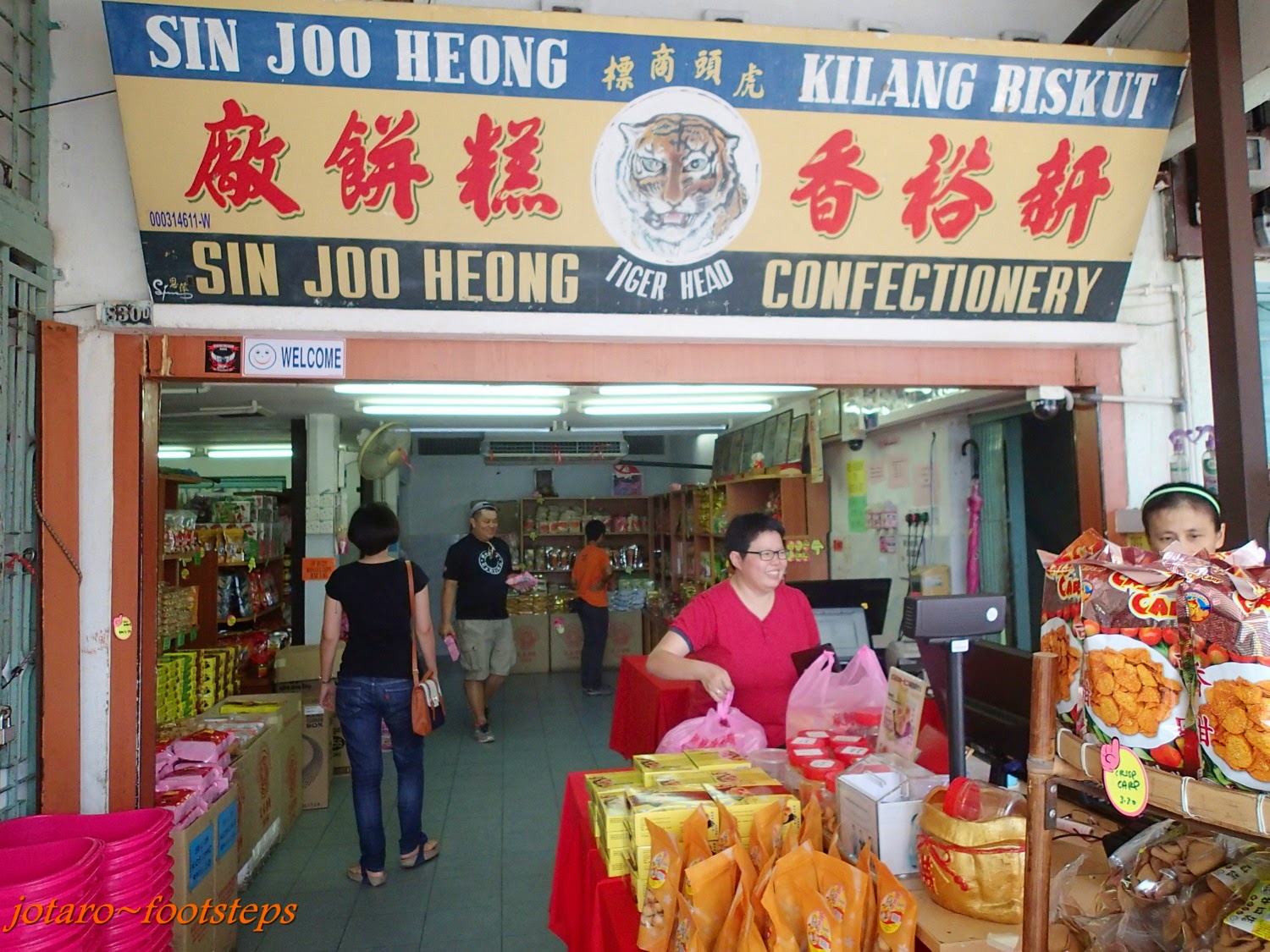 A surprise was in store for me when we arrived at the "factory"; it turned out to be a modern looking sales outlet for the Sin Joo Heong Confectionery. There were shelves after shelves of all sorts of biscuits and similar items; it seems many others also have that quirky taste for empty biscuits. Hah!
To be fair to them, the place also sell a good range of biscuits (including durian flavoured ones) and other sweet stuff which they made themselves. They also sell favourite confectioneries from other manufacturers. 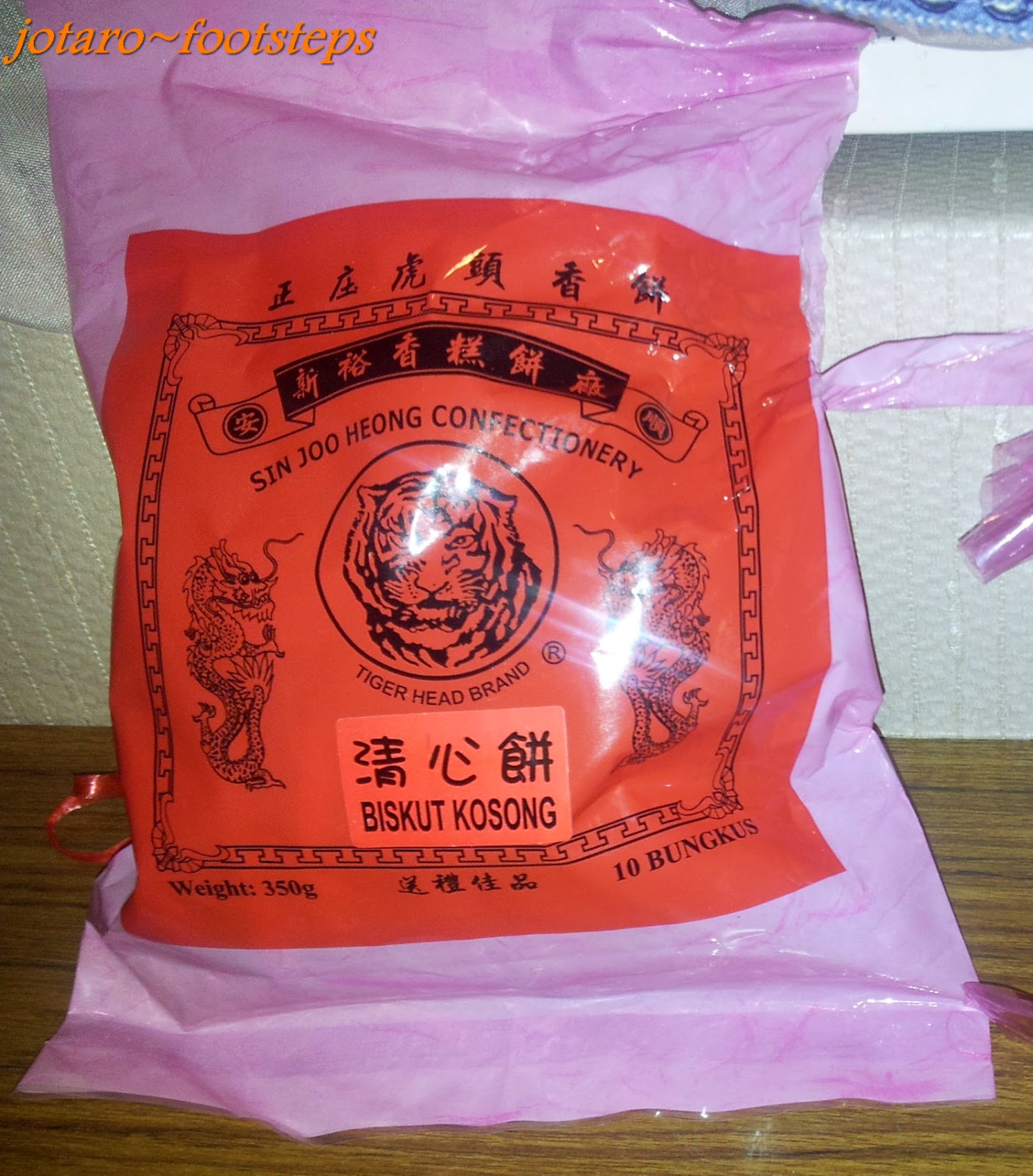 Ok, for those curious people wondering what the hue and cry about the biscuit is about, above is a photo of the biscuit in the conspicuous pink packaging with the iconic red Tiger Head label. Try it, it's good. 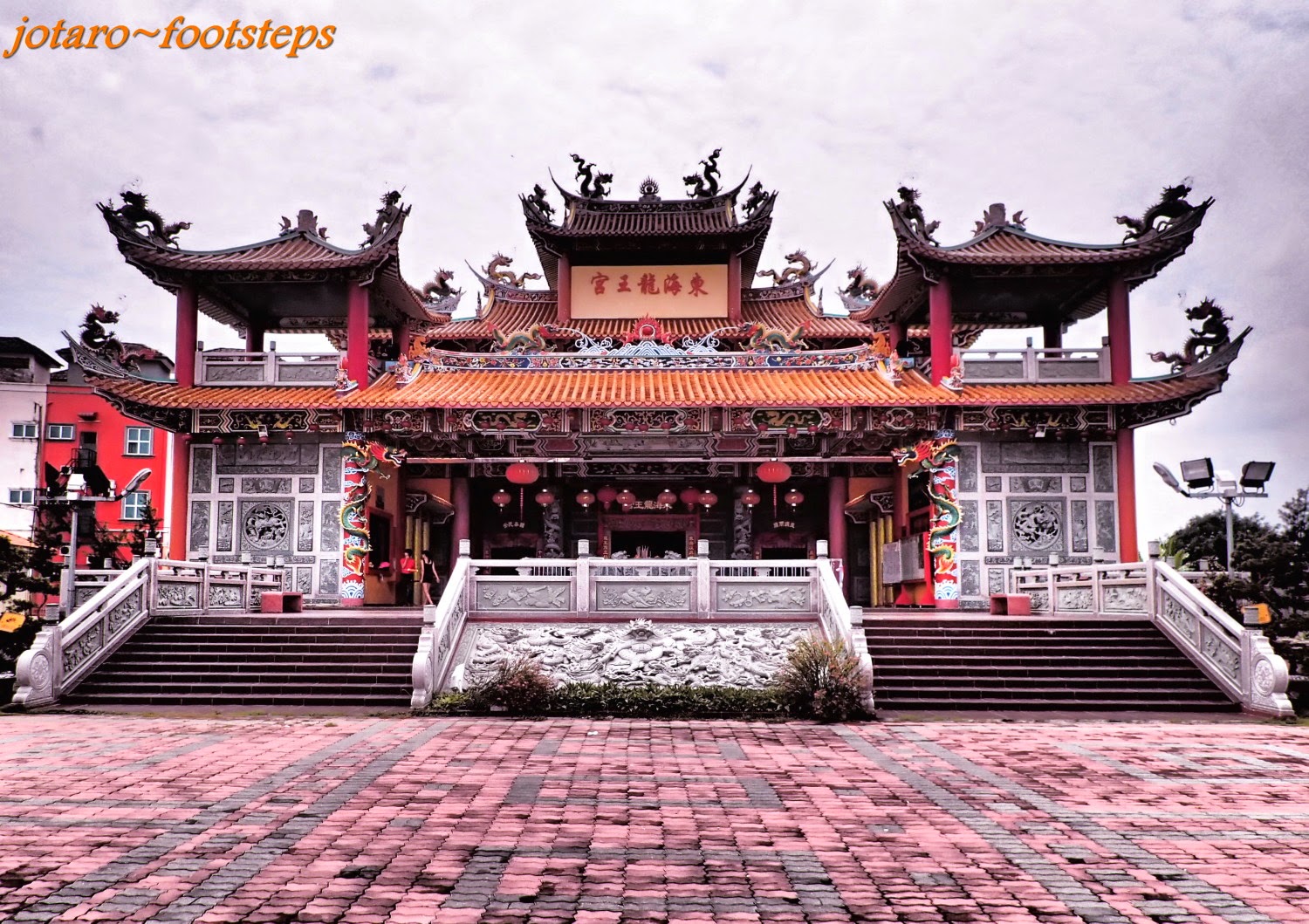 Our tour of the town had to come to a quick end. See, we had the previous night contacted a friend who is on a business trip in Sitiawan. Today, he will be driving back south and has agreed to pick us up and was on the way. We checked out just in the nick of time as he arrived soon after.
But our appetite to see more of Teluk Intan was not sated yet so we dropped in to visit the Dragon King of the East Sea Temple which is just behind our hotel. 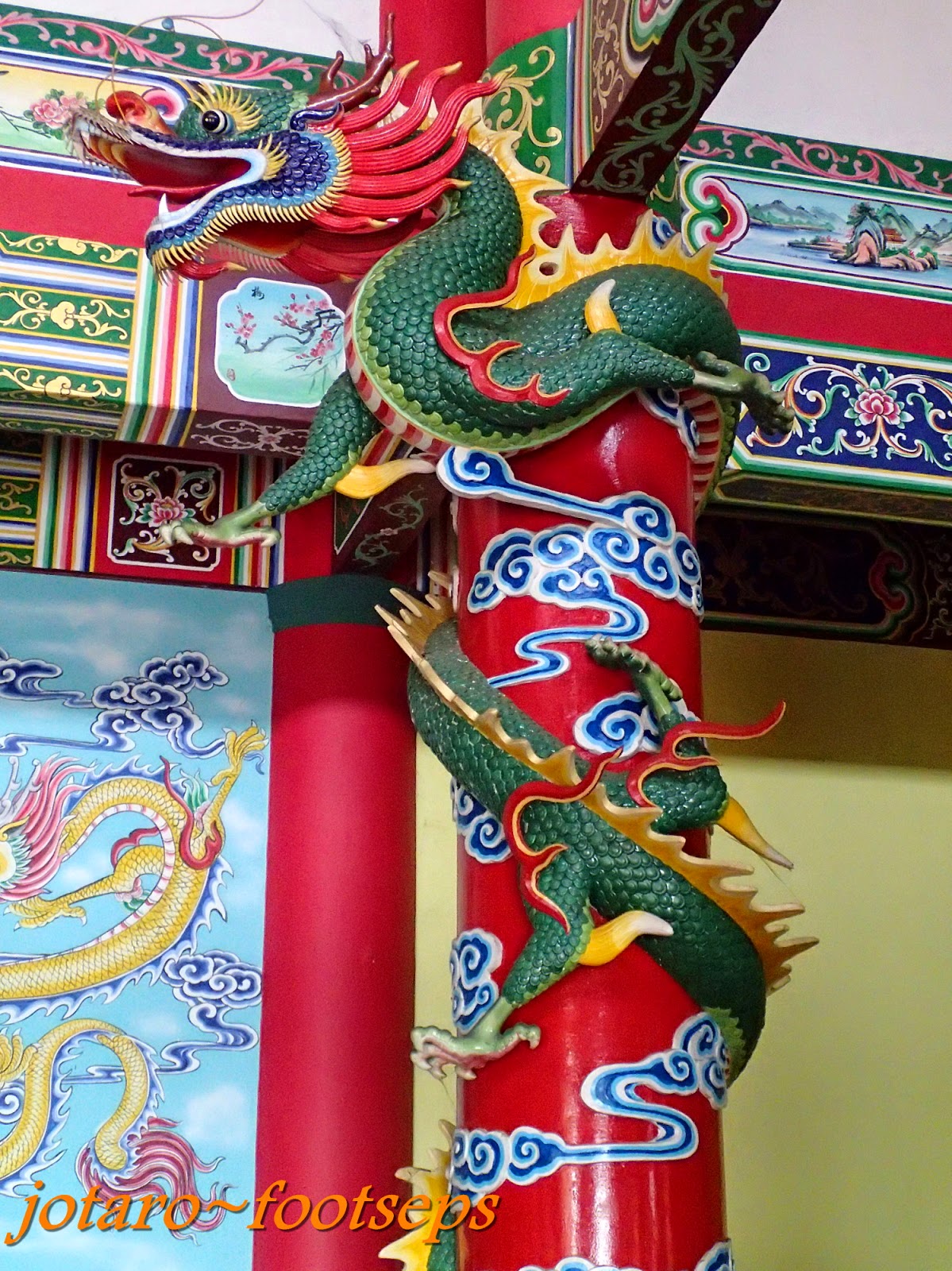 This temple is dedicated to Au Guang, the Dragon King who controls the eastern sea. And as to be expected the place is full of dragons - dragons on the roof, dragons wrapped round columns, dragon paintings, etc. It is a relatively new temple and yet a very beautiful temple, one that should not be missed when in Teluk Intan.
(... see more at Temple of The East Sea Dragon King blog) 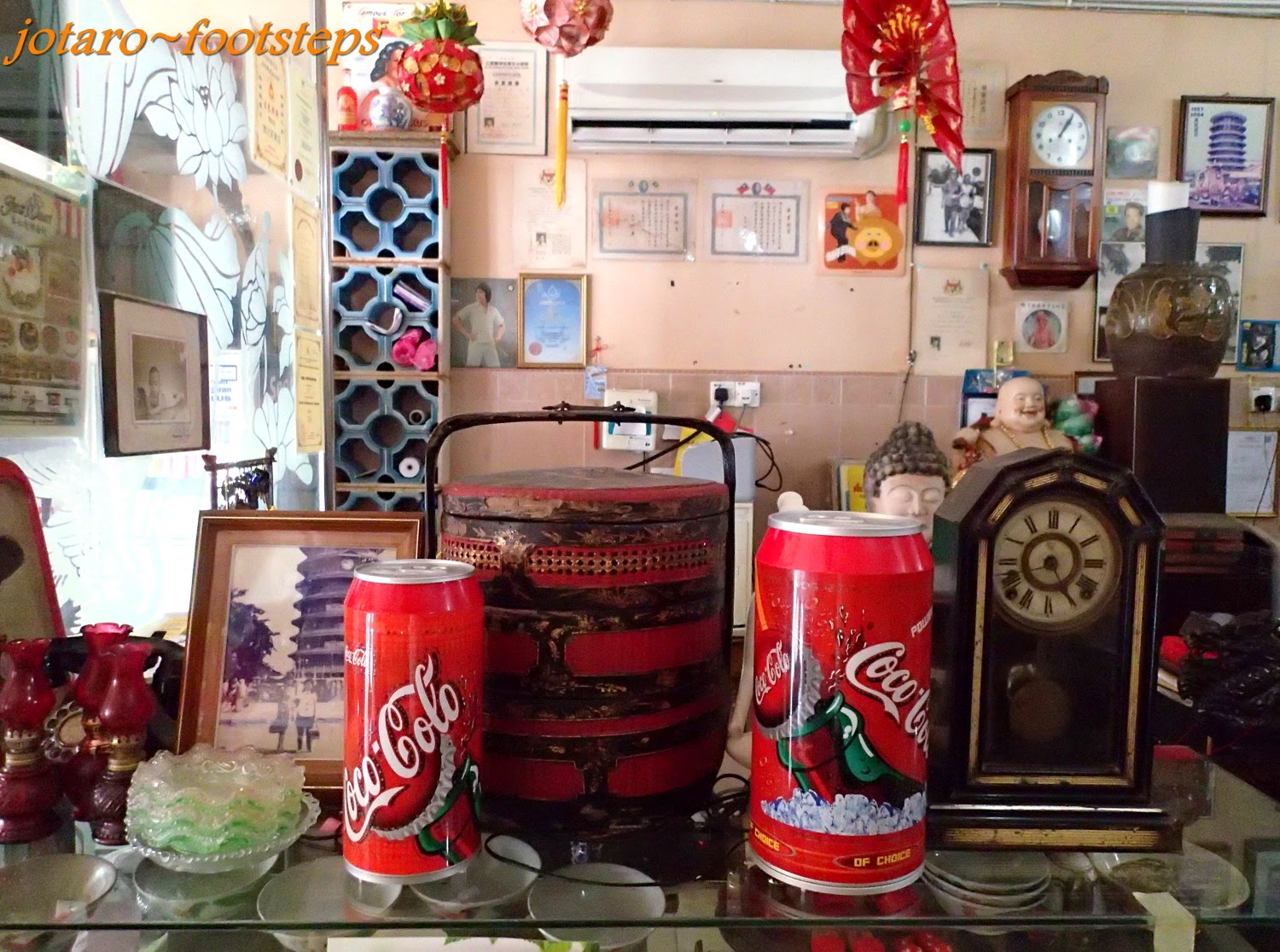 It's bye to the Dragon King and his beautiful temple and it's time for desserts.
We are back in town for that, at a place called Teck Kee Nyonya Restaurant which is another place not to be missed. Other than serving pretty good Nyonya Food, the place is a living antique shop; meaning all the antiquities on display at the shop is up for sale. The shop is stuffed full of antiques from old posters hanging on the walls to old clocks and statues on shelves. 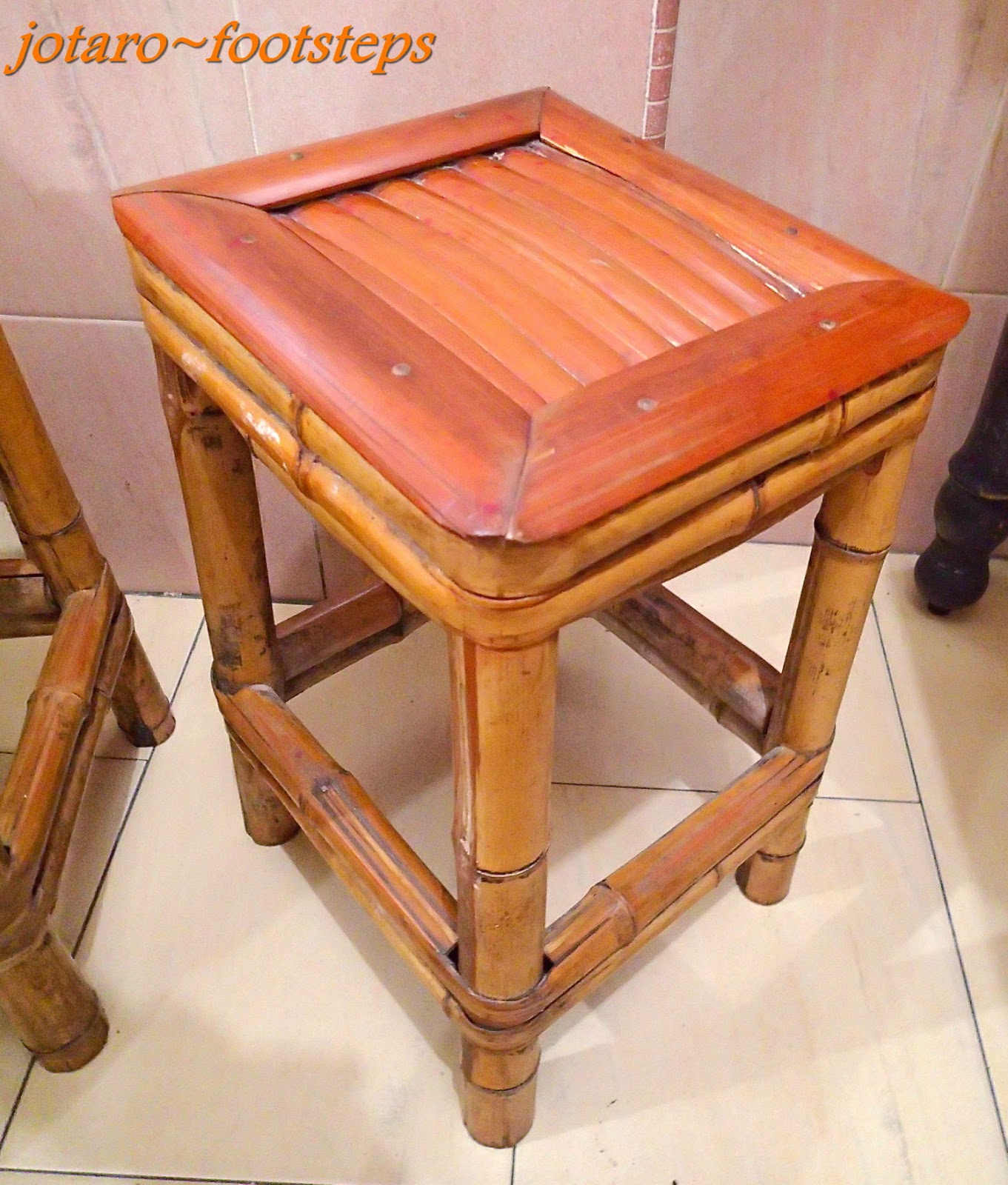 Heck! Even the old bamboo chairs and tables on which we are sitting while eating is up for sale!
(... see more at Teck Kee blog) 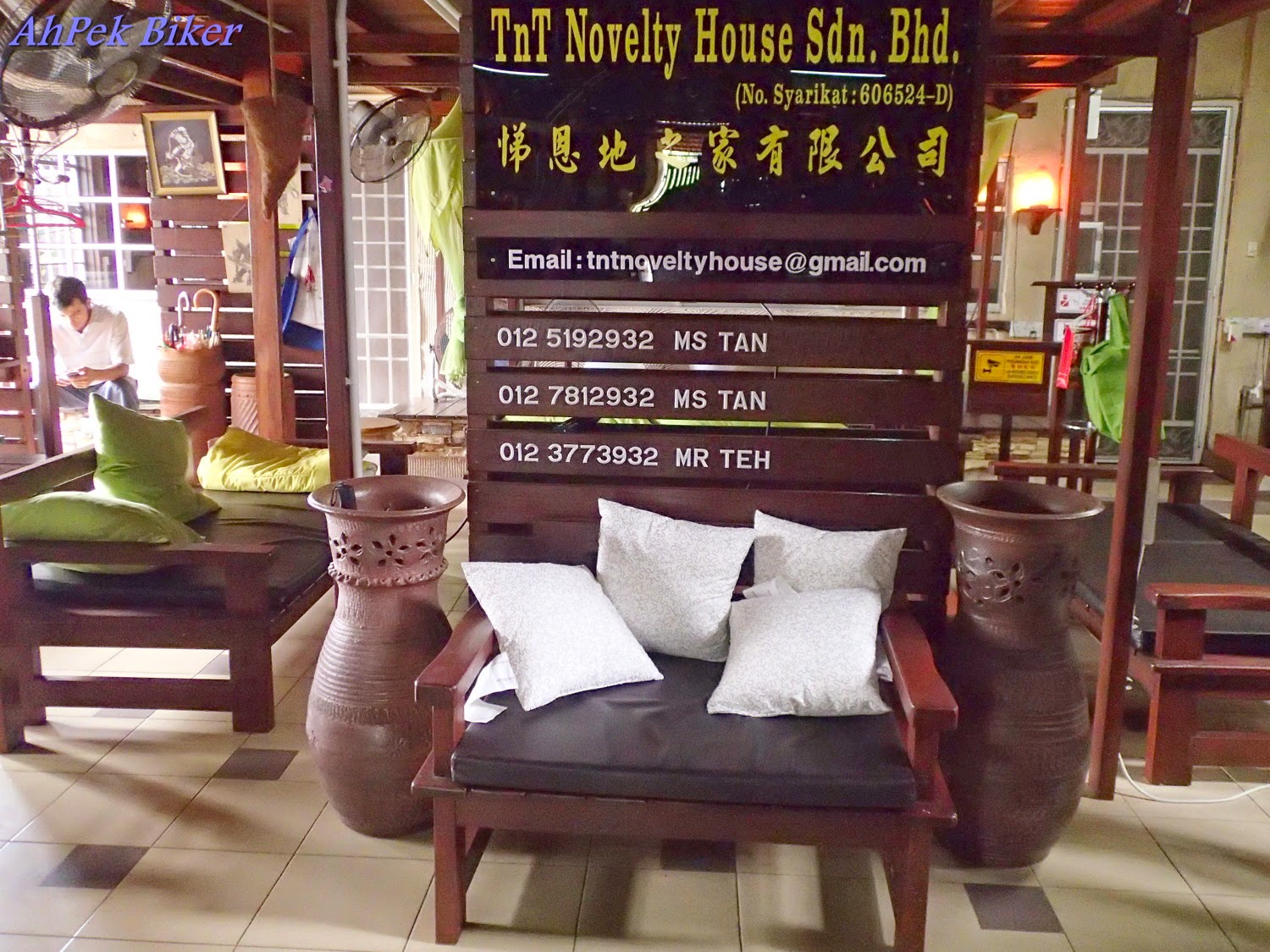 It's time to leave Teluk Intan, but just before that a quick stop at a place just on the outskirts of the town, to check out a home-stay for future overnight trips to the town. This is the TnT Novelty House which have a large, comfortable and homely decorated common living and dining area. We found out that the rooms are very reasonably priced too, much cheaper than a hotel offering similar comforts. The contact numbers and email address in in the photo above. 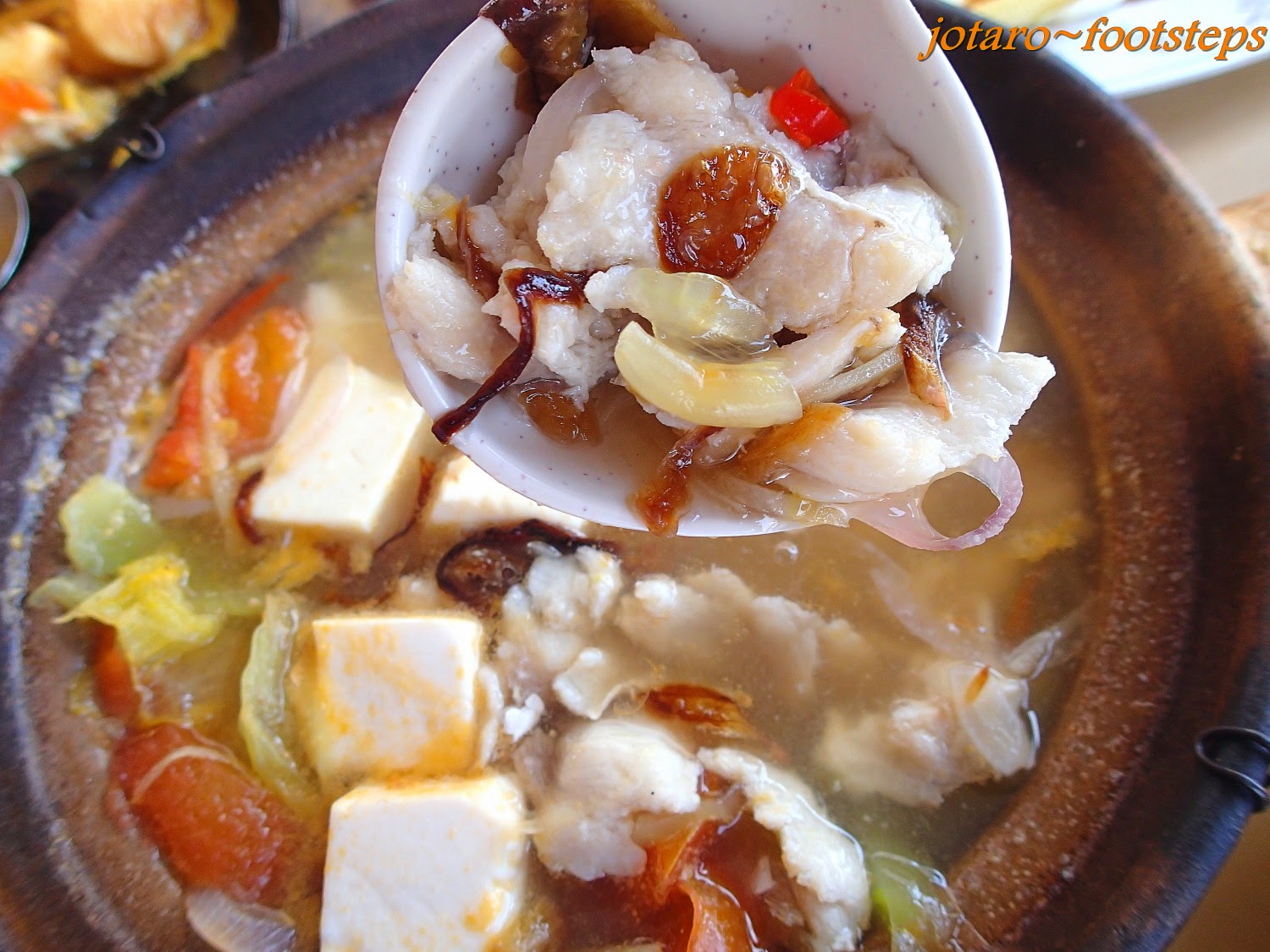 Okay.... finally.... it's time to begin our road trip back. But instead of using the North-South Highway or the federal old trunk road, we will be using the coastal road that will take as pass Sabak Bernam, Sungai Besar, Sekinchan before reaching Kuala Lumpur. Why that road? Well... hmmm..... it has more interesting foodie places for us to have lunch than those boring food courts at the highway R&Rs.
This being a Sunday, we decided to avoid Sekinchan which will definitely be crowded with tourists and instead headed for Sungai Besar to have a seafood lunch at Keong Hing Restuarant where amongst other things we had their signature shark-meat soup (shown above). Shark meat? What can I say, there are man-eating sharks and their are sharks-eating men! Suffice to say the food was very good and very reasonably priced and anytime better than the limited choices along the highway.
(... read more at Keong Hing Seafood Restaurant).
__________________________________________________________ 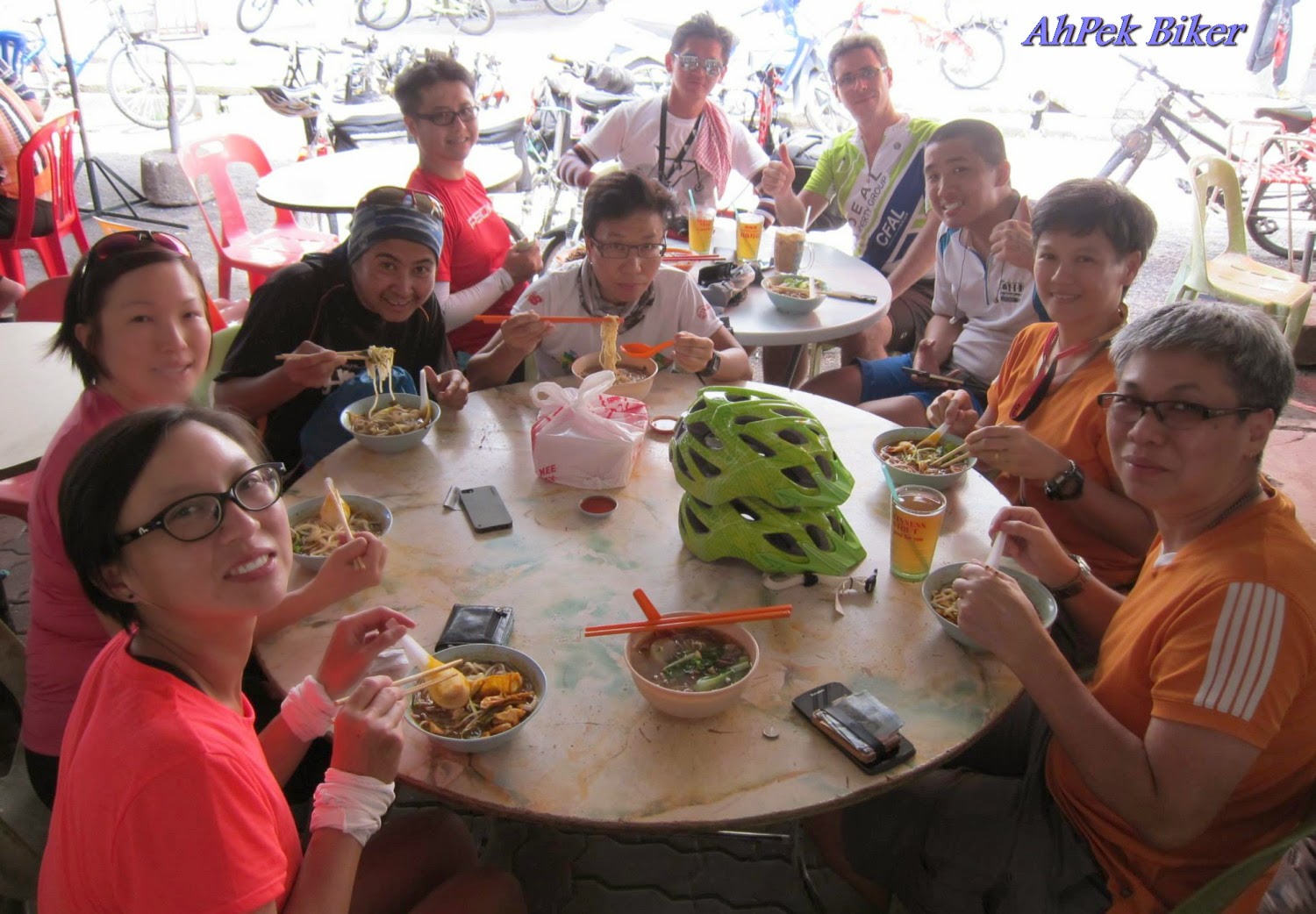 Er.... you must be wondering what happened to our young friends....
Well, after a good letting-off-steam cycling trip, on reaching Kampar they had their own foodie adventure at the 36-stalls food court. At one of the stall they had what is claimed to be the best Assam Laksa in south of Penang! 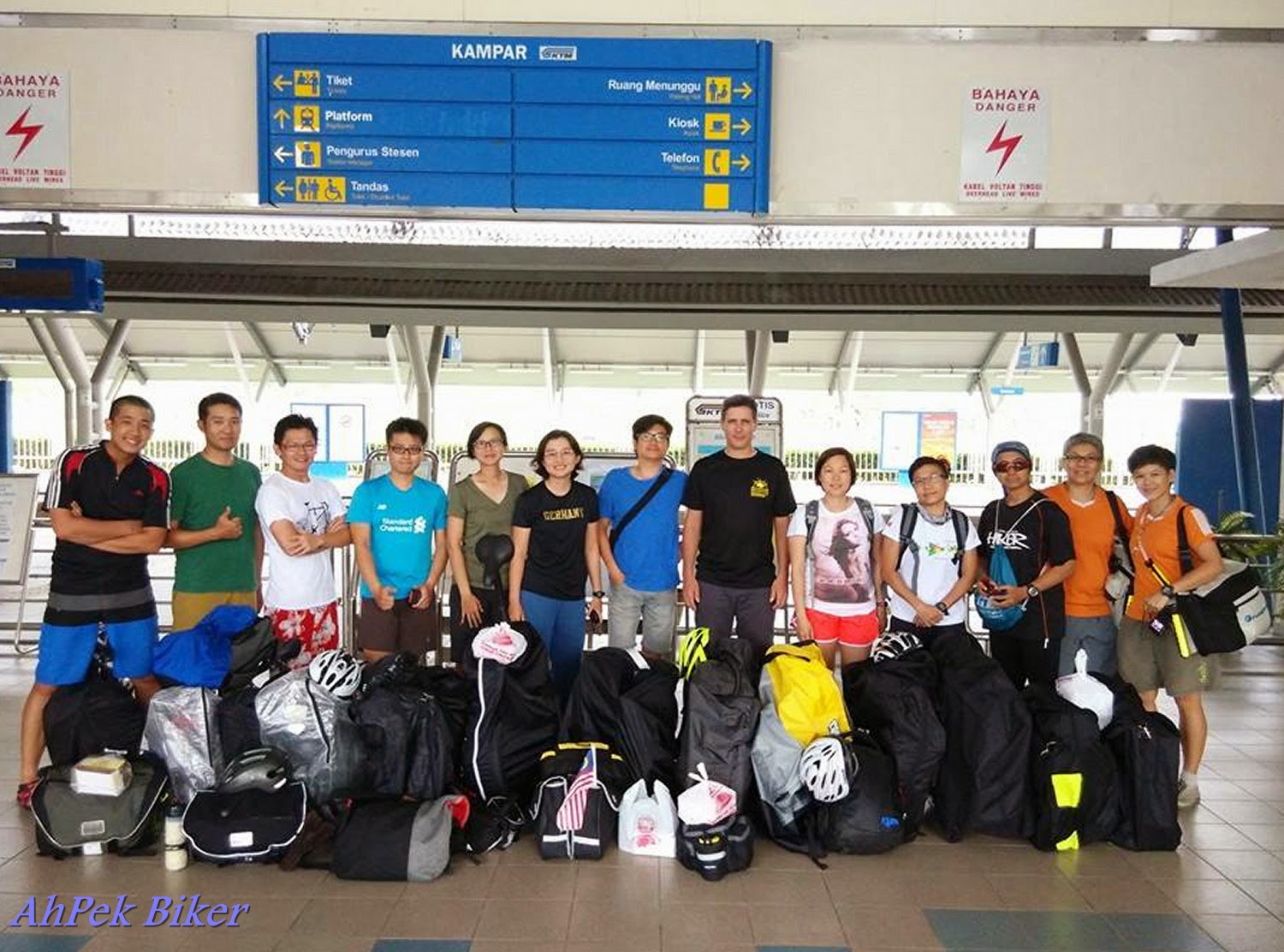 And then a memorial photo at the train station before boarding the ETS train back home.

Overall it was a good trip, one with a challenging ride, good food and somewhere in between cyclo-tours of Ipoh and Teluk Intan.
Thanks Kong for including us into your adventure.