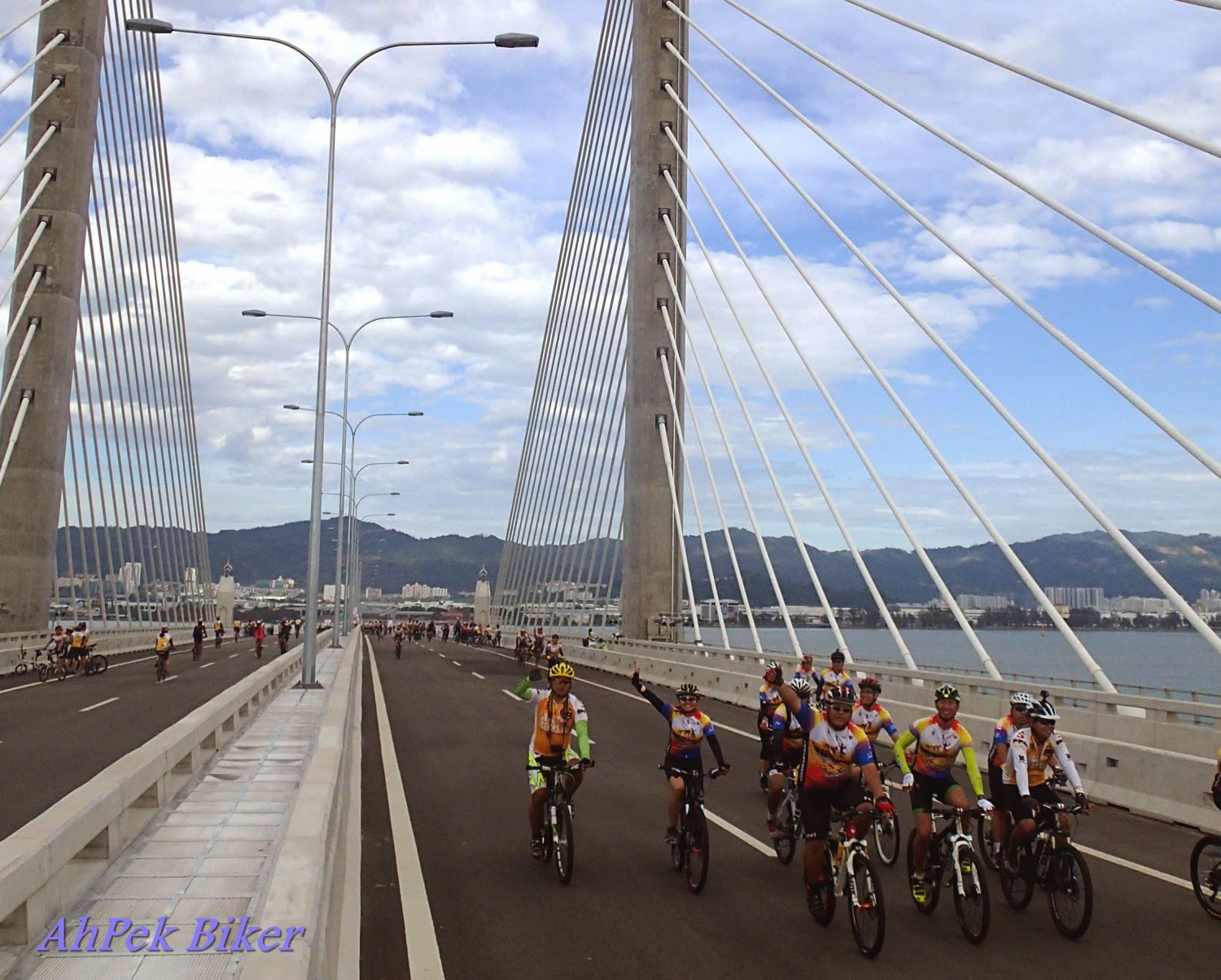 PRELUDE
THIS IS IT!!
This is the event that many of us have anxiously waited for. An event that had been postponed a couple of times whilst waiting for the completion of the 2nd Penang Bridge.
The bridge spans a total of 24 km. from Batu Maung on Penang Island to Batu Kawan on the Peninsular Malaysia mainland, making it the longest bridge in South East Asia. It's official name is the Sultan Abdul Halim Muadzam Shah Bridge. An earlier design included two circular viewing platforms at mid-span where shops would be located. However, probably due to traffic congestion possibilities, this was scrapped. 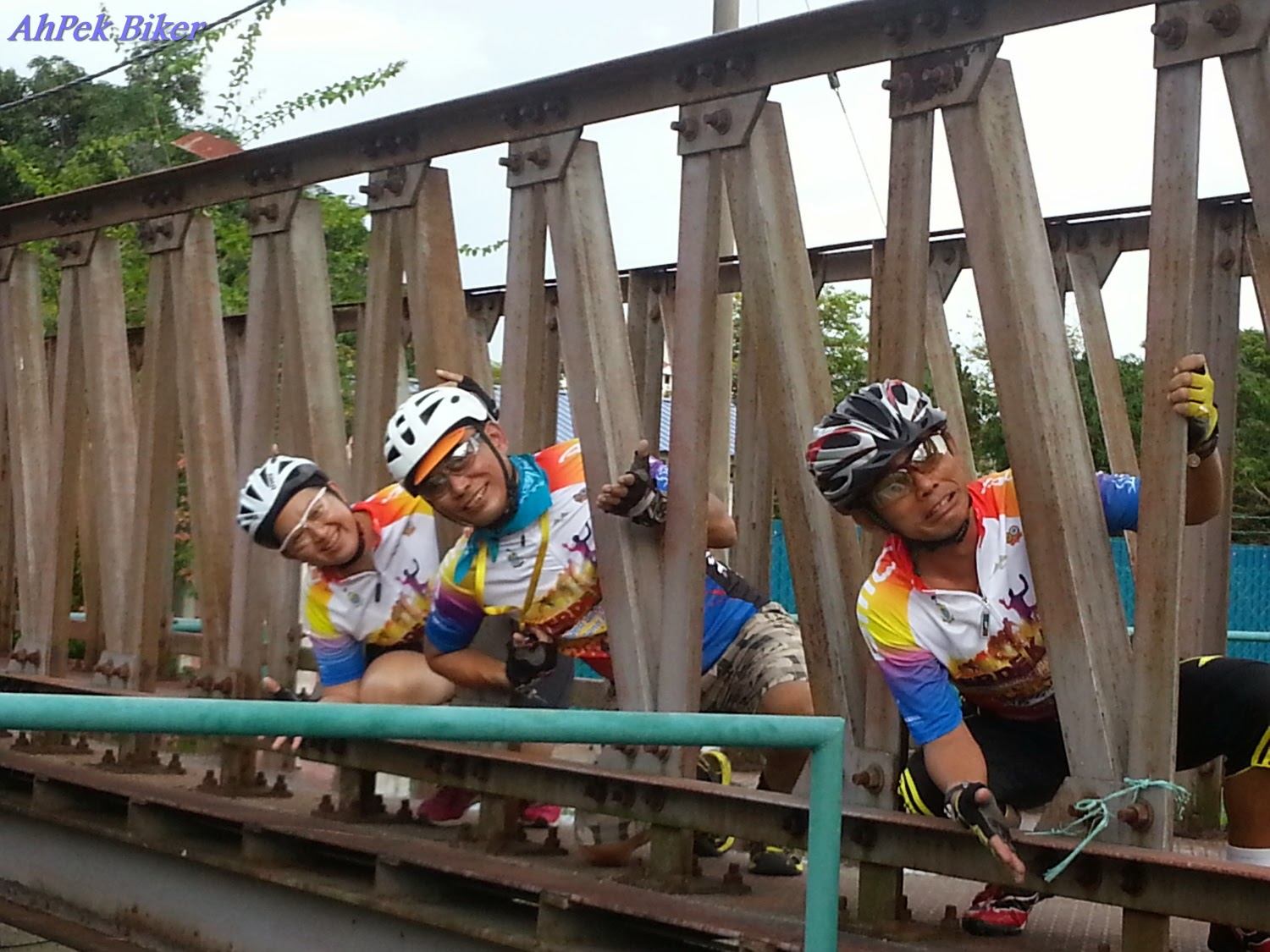 The event, organized by Bicycle Town, was planned to be held in August 2013, hence the "56th Merdeka Ride" name of the ride. This coincided with the 56th year of Malaysia's independence in August 2013. It was postponed to 8th September 2013, but the bridge was not ready yet and it was postponed again. Which was quite fortunate as it clashed with another major cycling event in Penang, the "Cycle For A Lane" (CFAL5) event.
Many of us from Kuala Lumpur went up for CFAL5 and took the opportunity to collect the goodies bag for the bridge ride. The jersey is very colourful and we immediately wore it for a Magic Carpet fun ride; posing at a bridge in Sungai Ara. 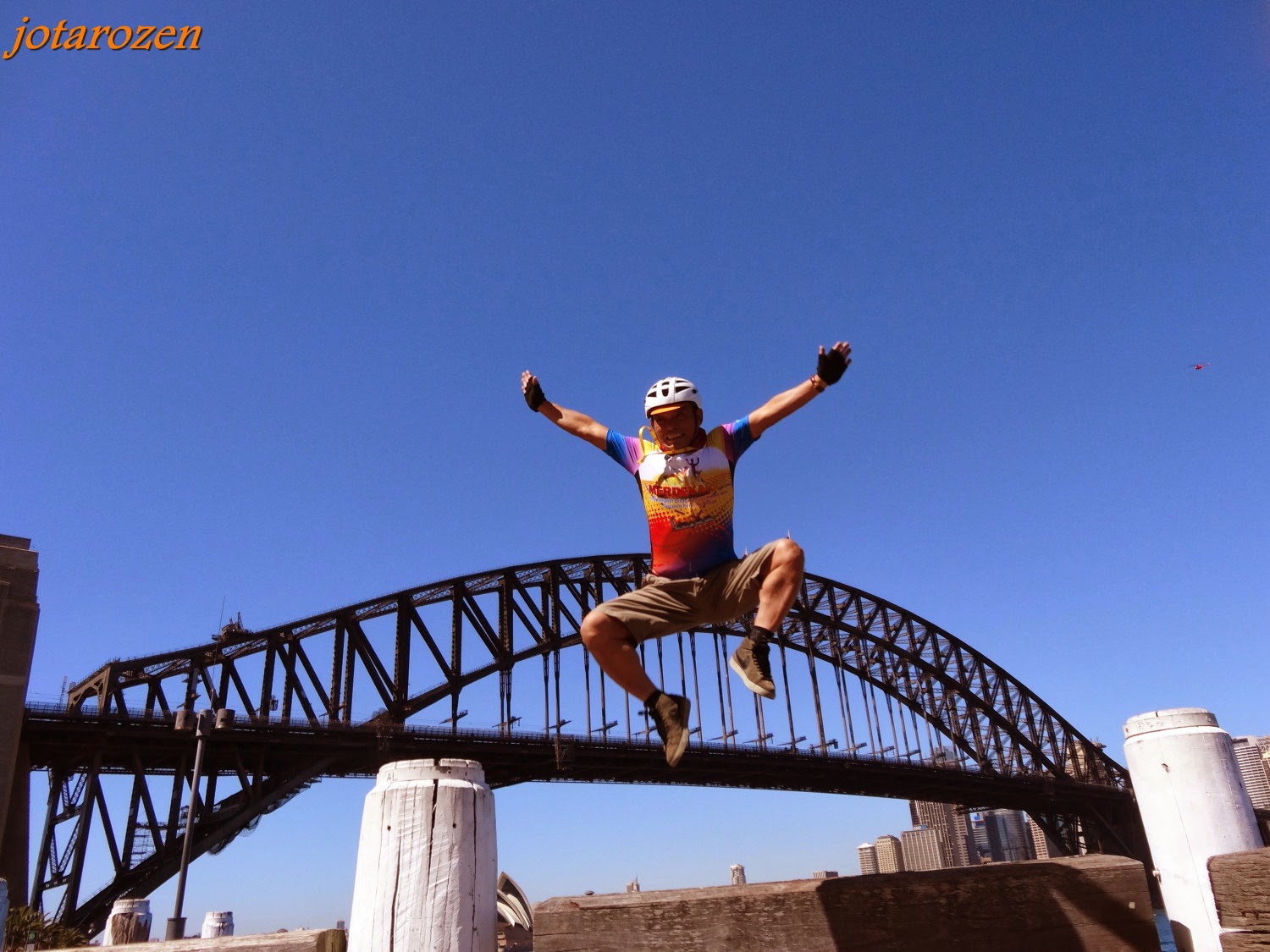 I really like the colourful jersey and wore it while cycling in Sydney, Australia. With Malaysia's name embossed on it, it made me easily identifiable as a Malaysian. Quite a number of people did ask me whether I am from Malaysia. So point of note - will try to wear this jersey overseas more often. *smiles* 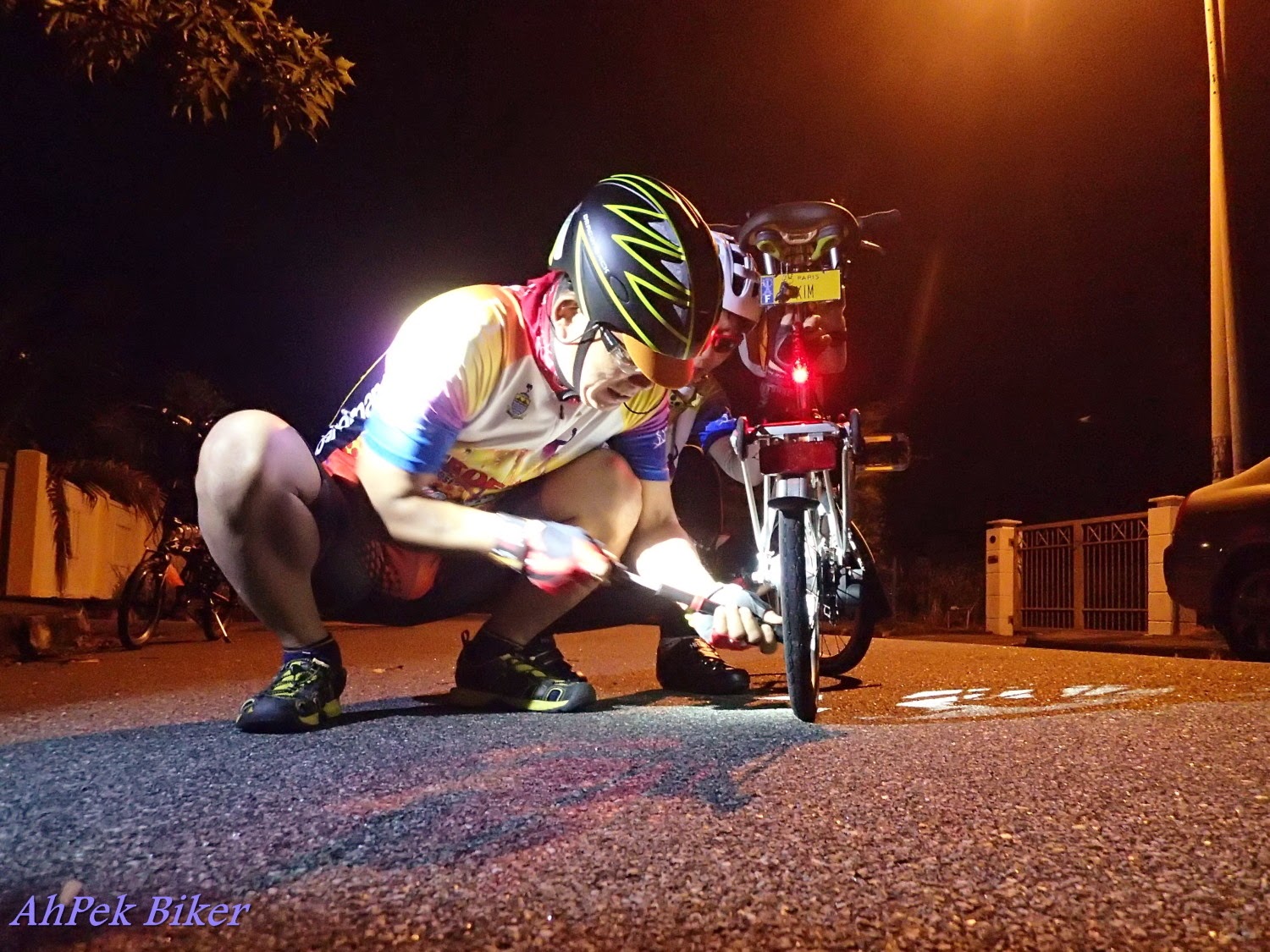 In the early morning, we headed out from our home-stays towards the Batu Kawan Stadium.
Oops! A minor problem, one of our group's bicycle was low on air. No worries, there's always someone to help out.

At the start-point, it was really a mass of cyclist. Close to nine thousand cyclists gathered outside the stadium, waiting impatiently and eagerly to start a historic cycling event. 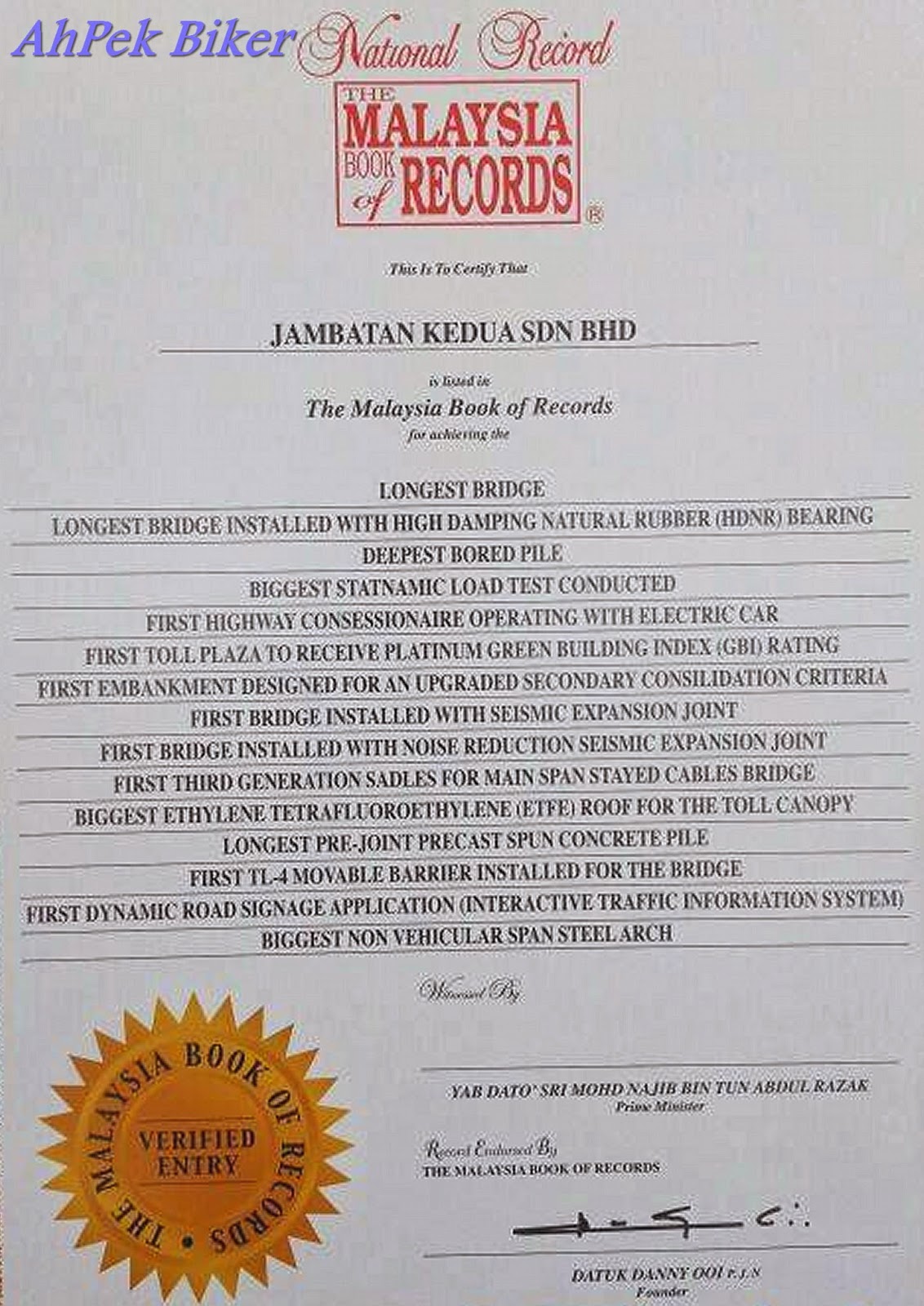 Yes, the bridge has been awarded a certificate by the Malaysian Book of Records for many firsts in technical innovations. And yes, I think they will probably have to issue another certificate for the most number of cyclists attending any one event! 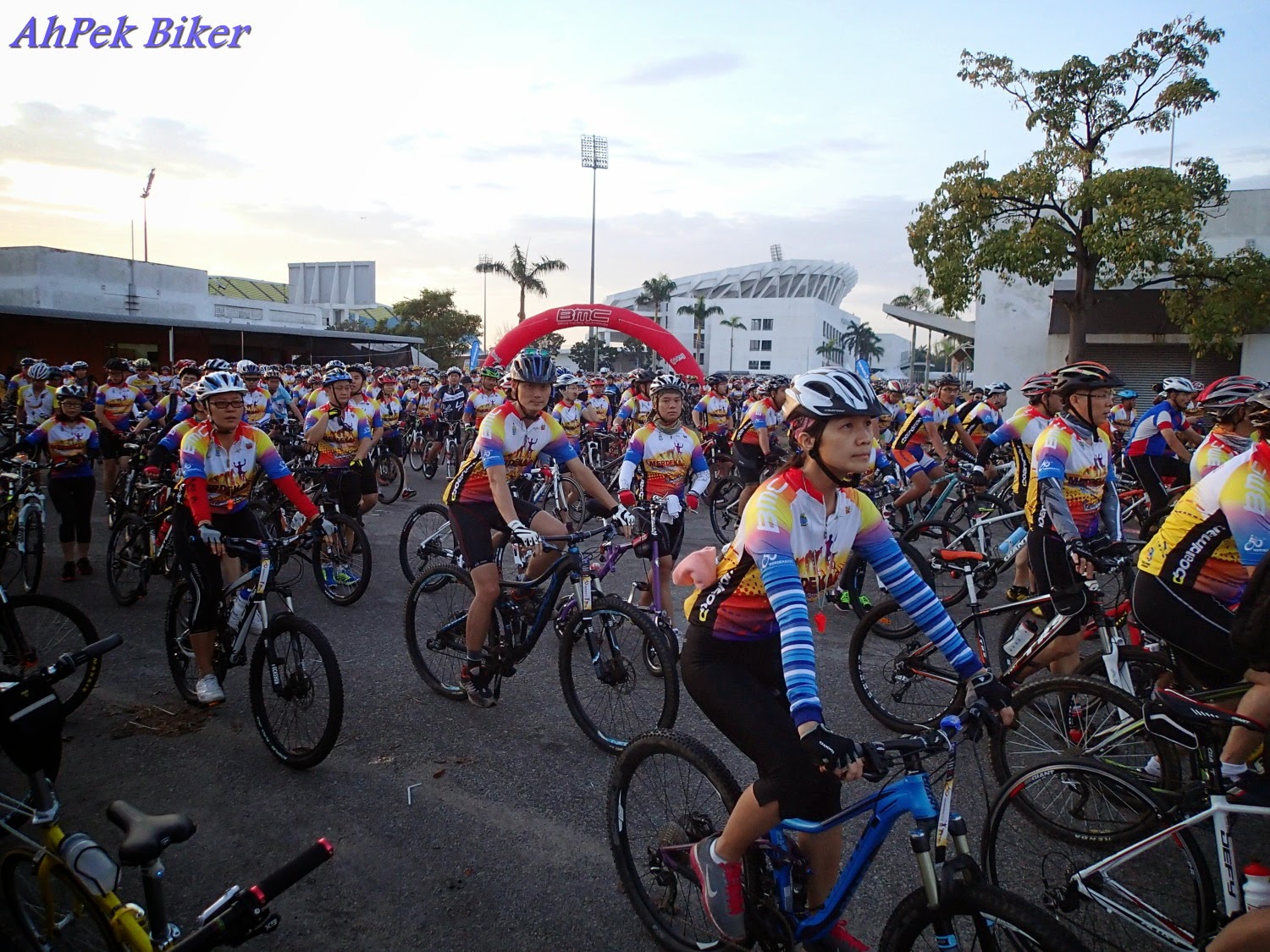 We were impatiently waiting for the start, when we saw a group of cyclists started to cycle off. Is this the start? Uncertain we waited a while, but as more and more cyclists rode off we joined the fray. There were not starting horn or blaring klaxon to kick-off the event for us; it was a quiet start for a major historic cycling event. 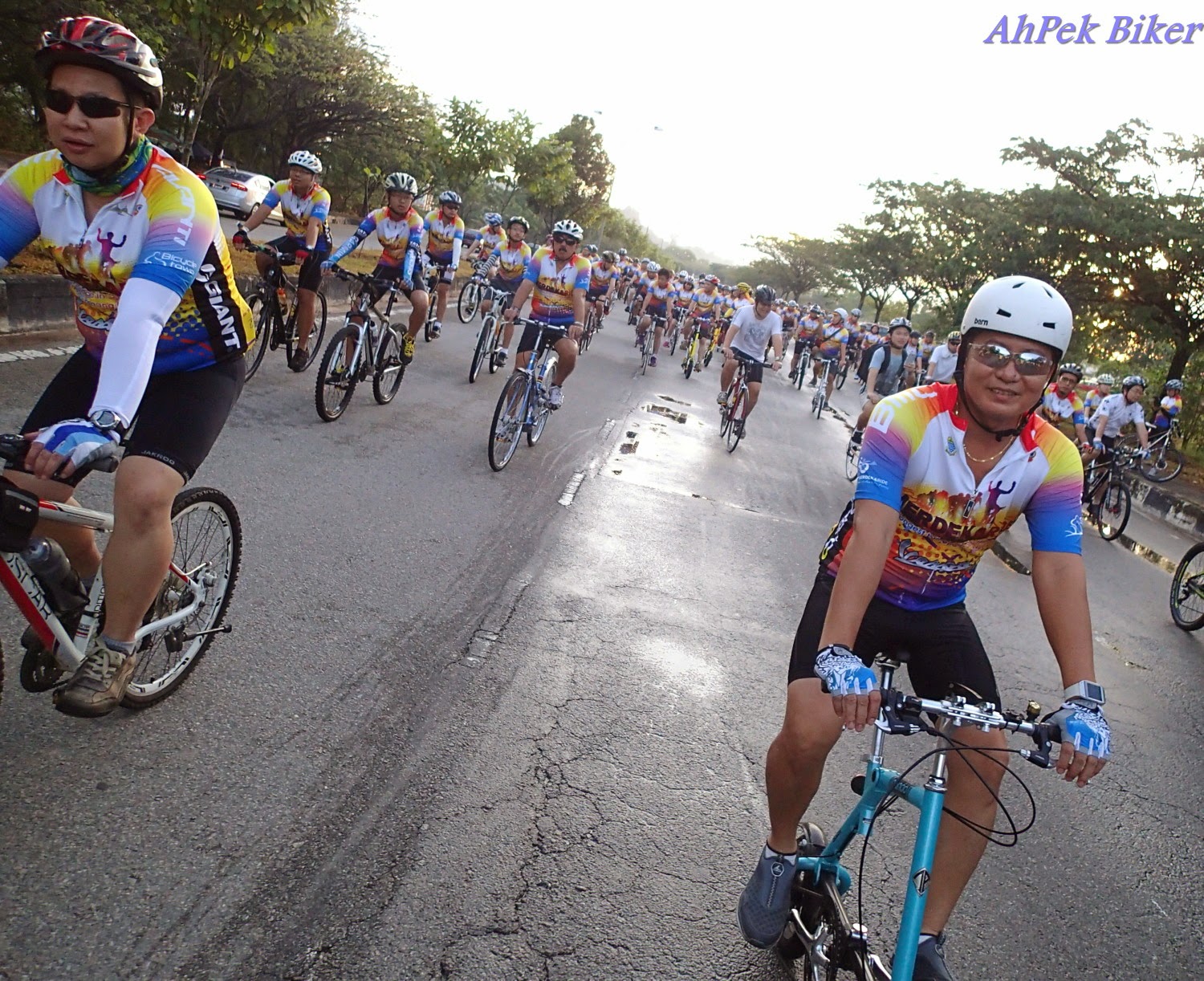 But no complains here. We were just keen to be part of cycling history, and were soon cycling on the Bandar Cassia Highway that leads to the bridge. A previous night rain has made the weather nice and cool for cycling, and the skies clear of haze that had enveloped most of the country for the previous two weeks. Great! 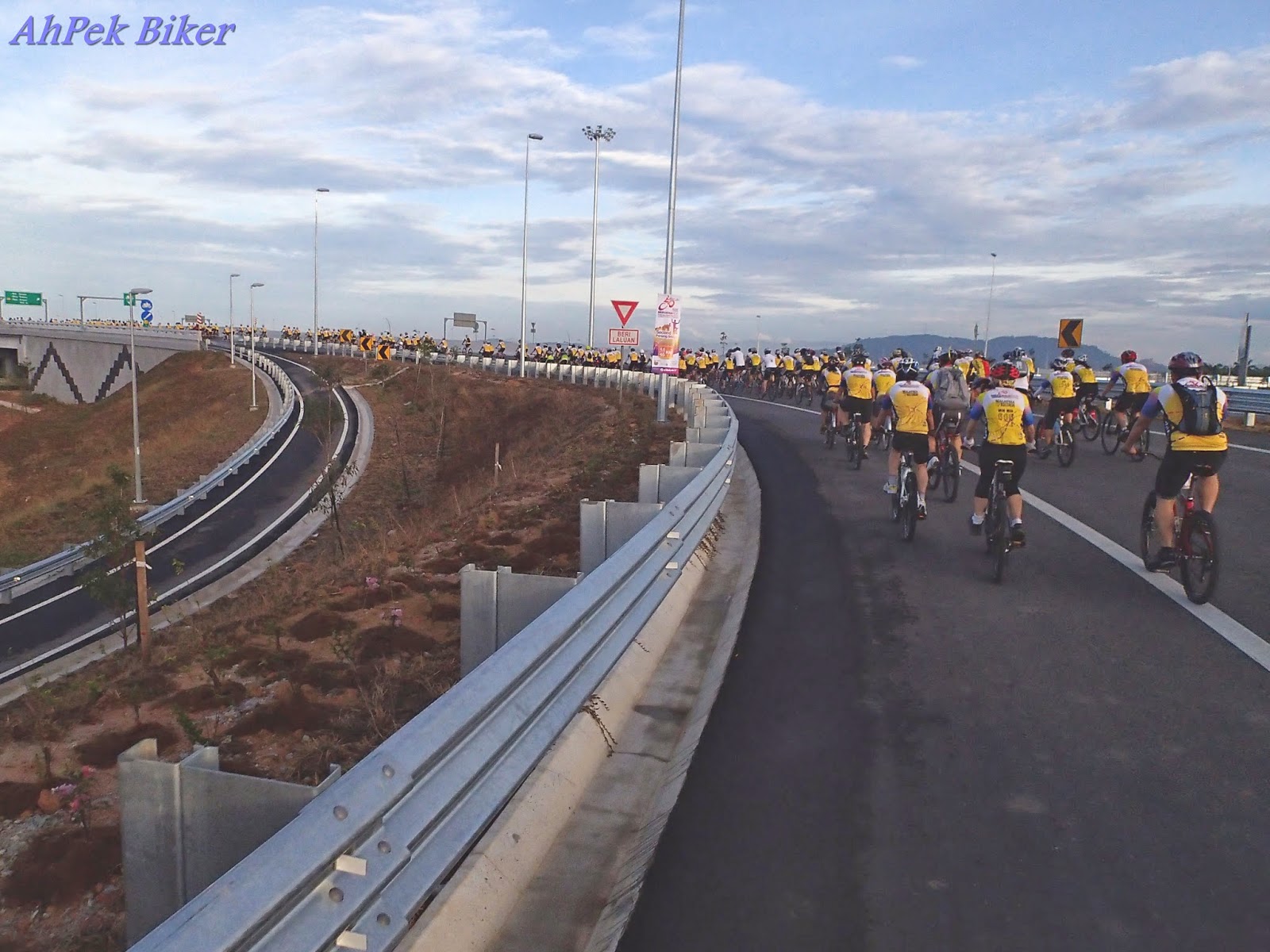 Up an ramp and we are riding on the bridge, well the approach section anyway. The total span of the bridge is twenty four kilometres, seventeen of which is over water. The bridge was officially opened to traffic on 2nd March 2014. But today is a special day, today is Car-Free Day on the 2nd Penang Bridge! 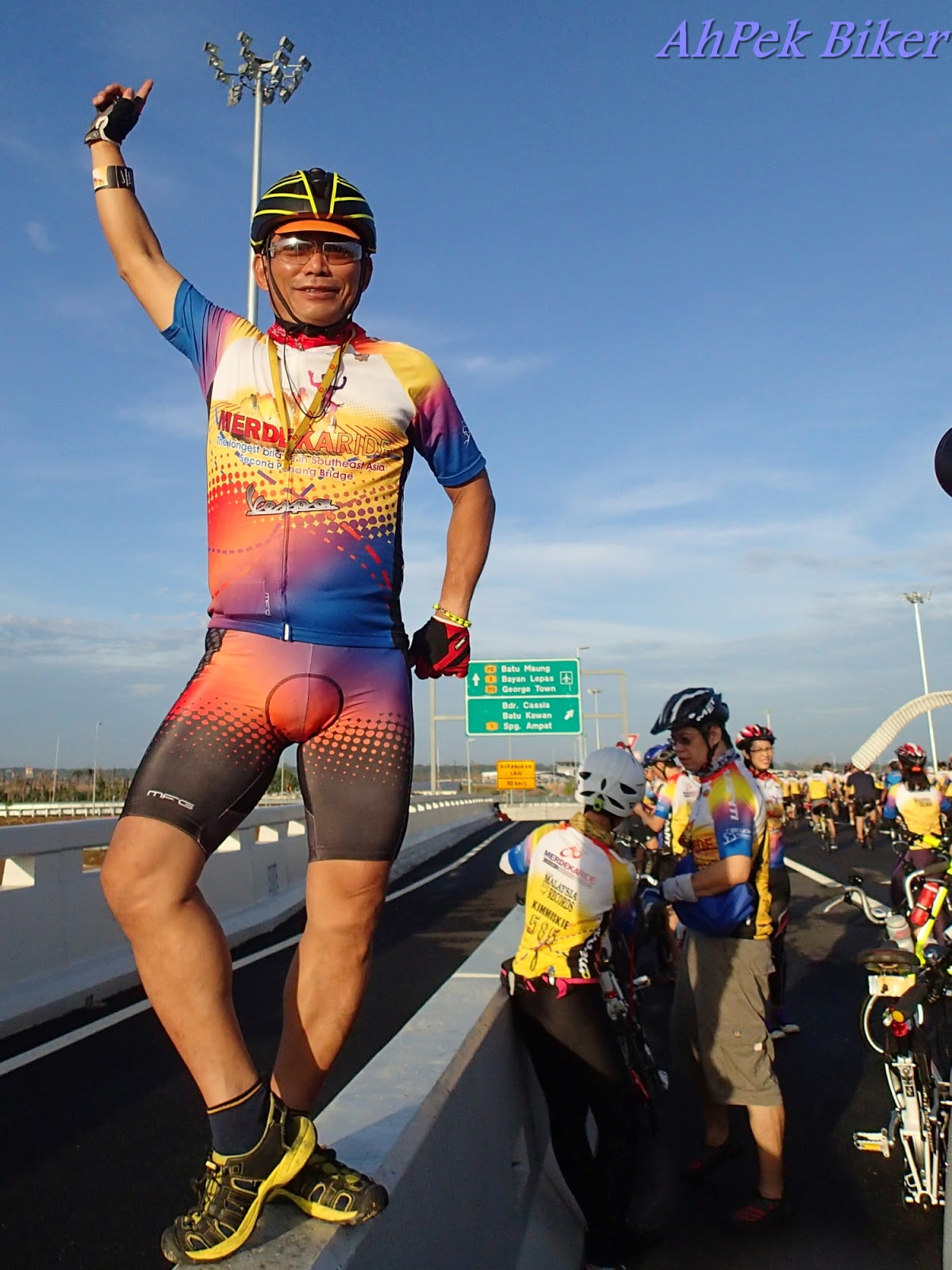 Dancing with joy on the bridge, it's exhilarating! 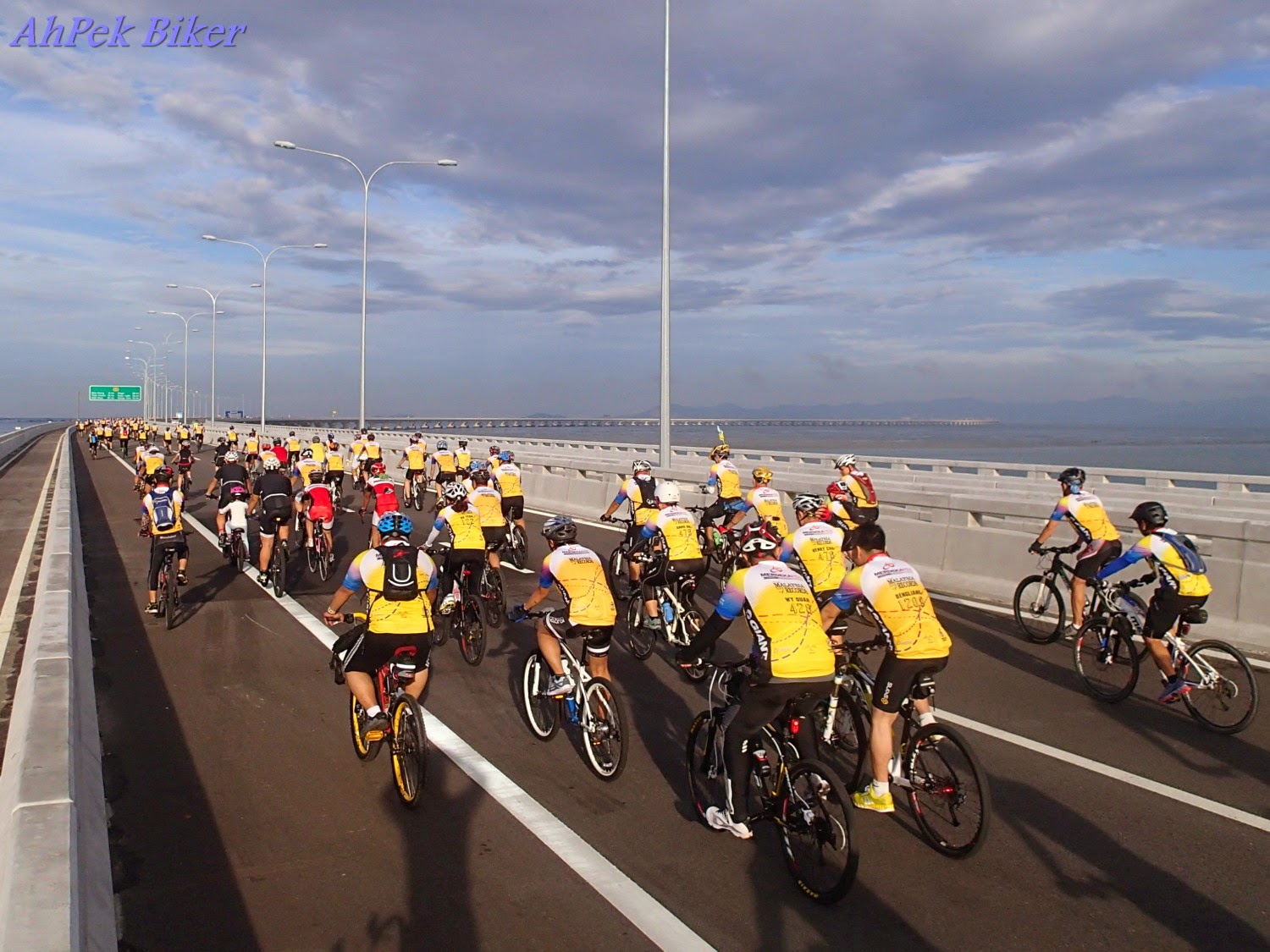 Wooohooooo! We are riding over the sea. Further away the rest of the bridge can be seen curving towards Penang Island which seems so far away. And at 17 kilometres, it IS far away. The bridge uniquely has an S-curve thus making other sections of the bridge visible while on it. 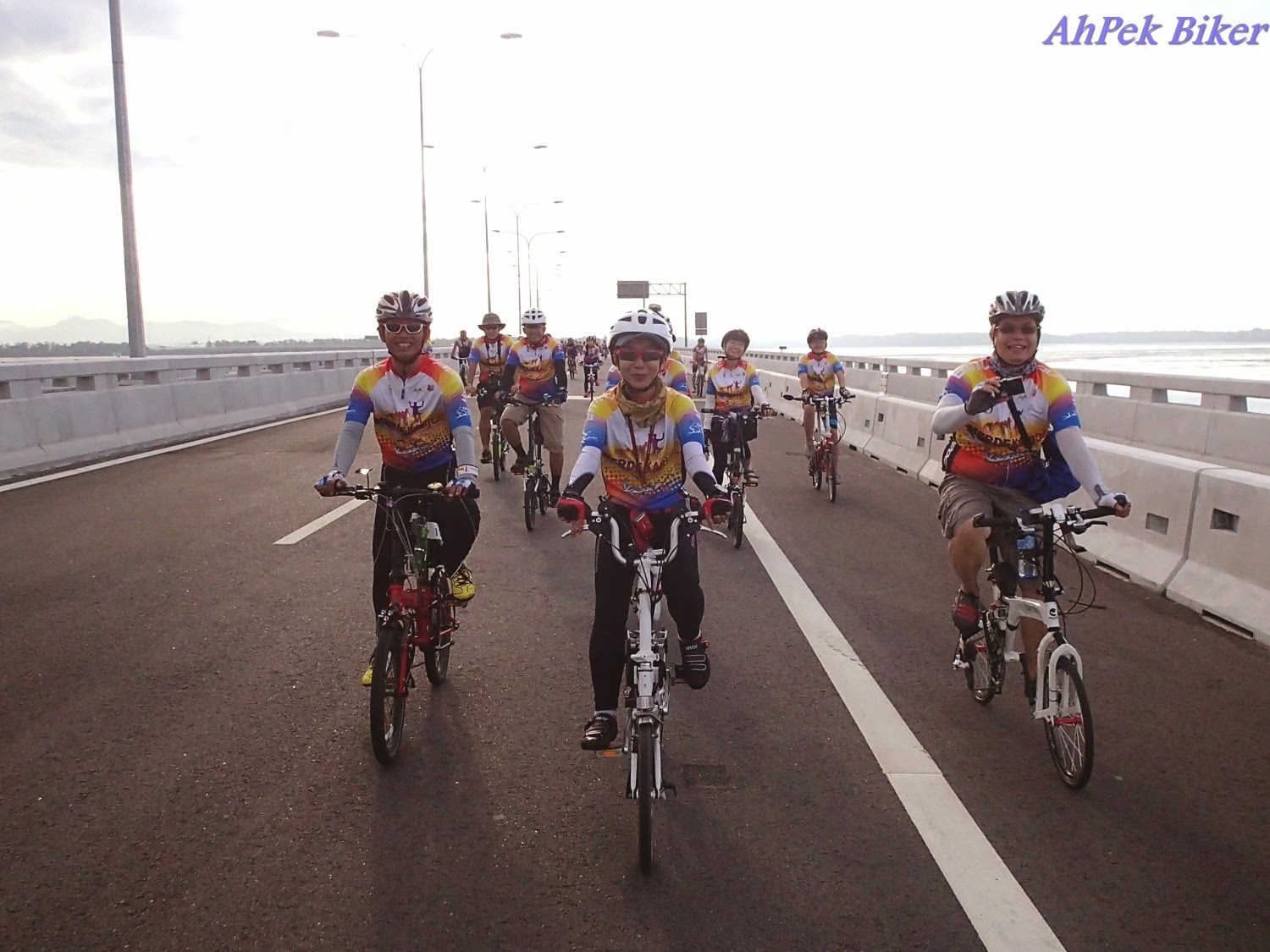 Riding over the sea seems to have a joyful effect on my friends, they were smiling away as they cycled. Most of us were at the rear of the event group, leisurely cycling and taking in the moment. 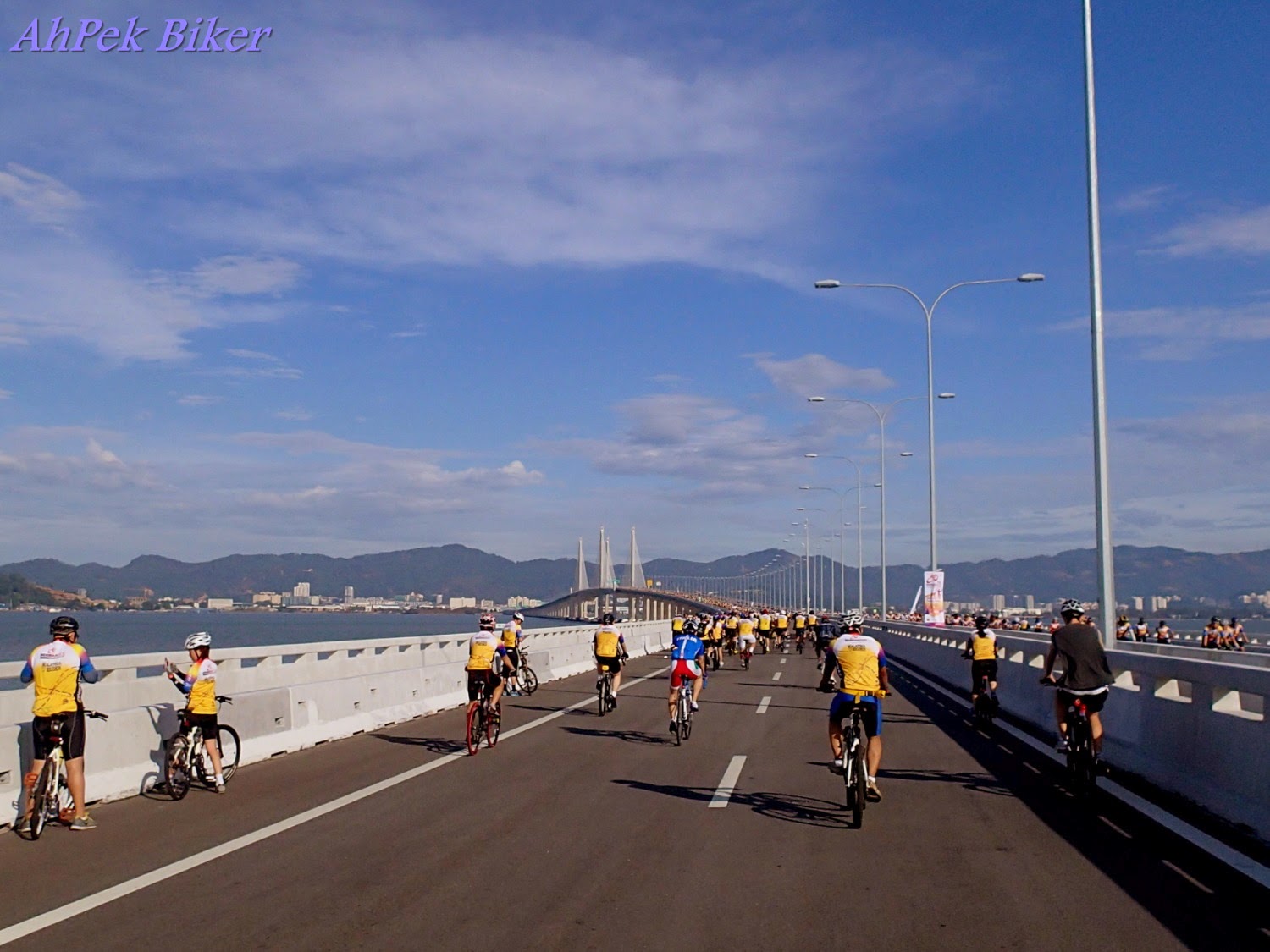 Our leisurely pace slowly turned into excitement as we approached the main span, and Penang Island became more visible. 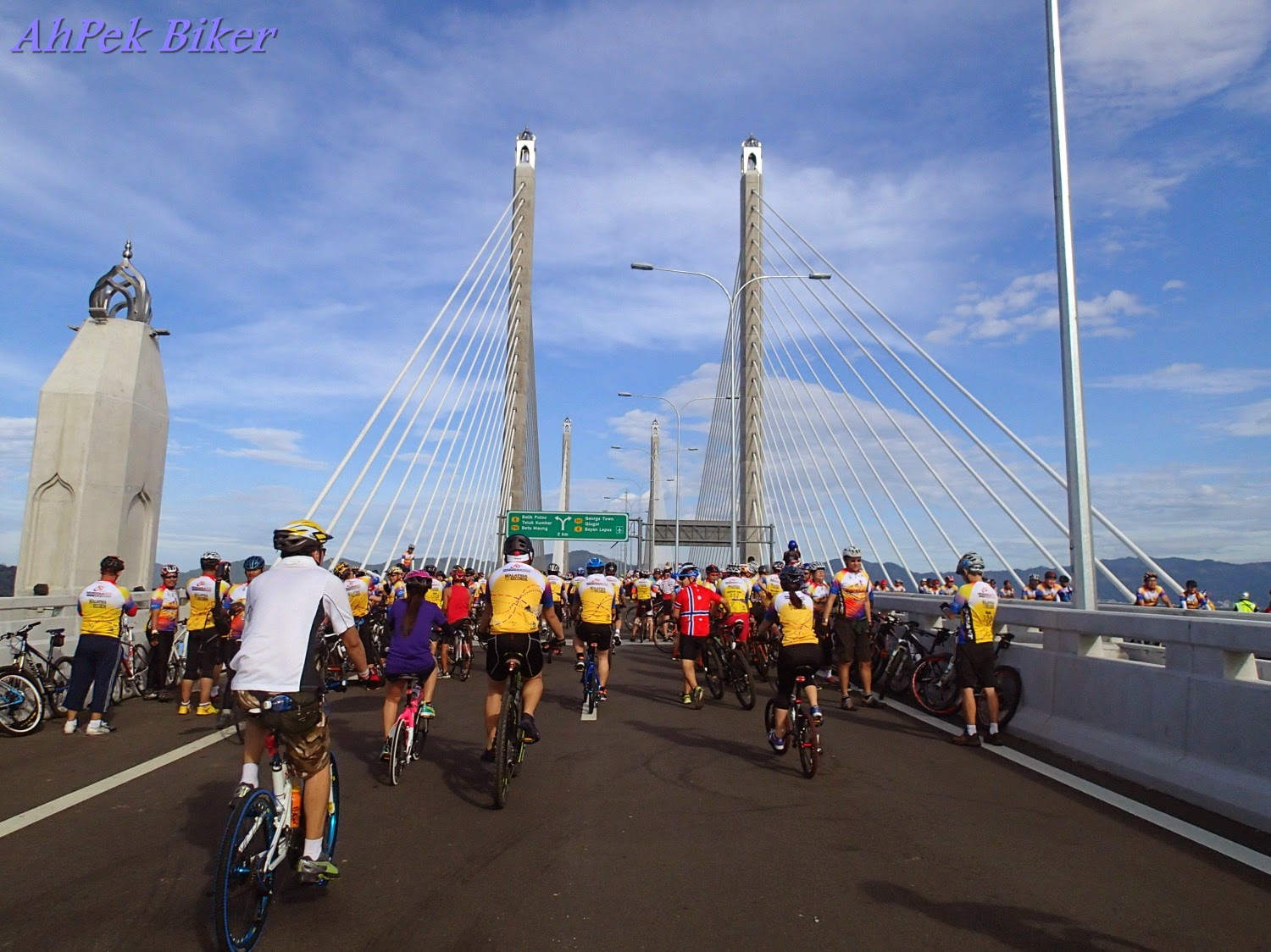 Hurrah! We are onto the main span; it's four masts towering high and the cable stays radiating outwards like beams of the sun. Slightly ahead, past the second towers, we will turn back. 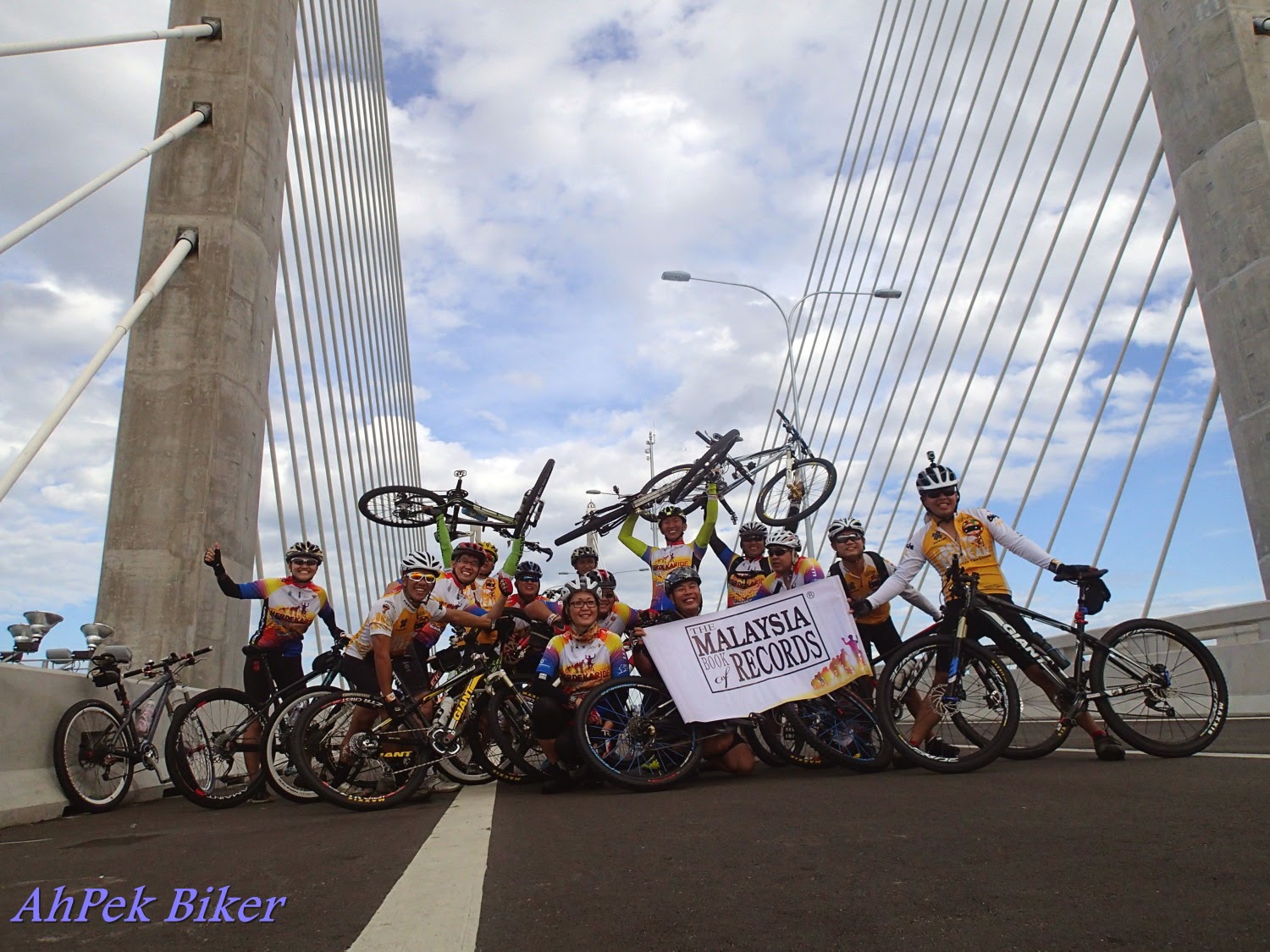 But in the mean time, it was almost like a party here. Almost everybody stopped to take photos with friends for remembrance and being able to say "I was THERE!". Groups lined up for their photos... 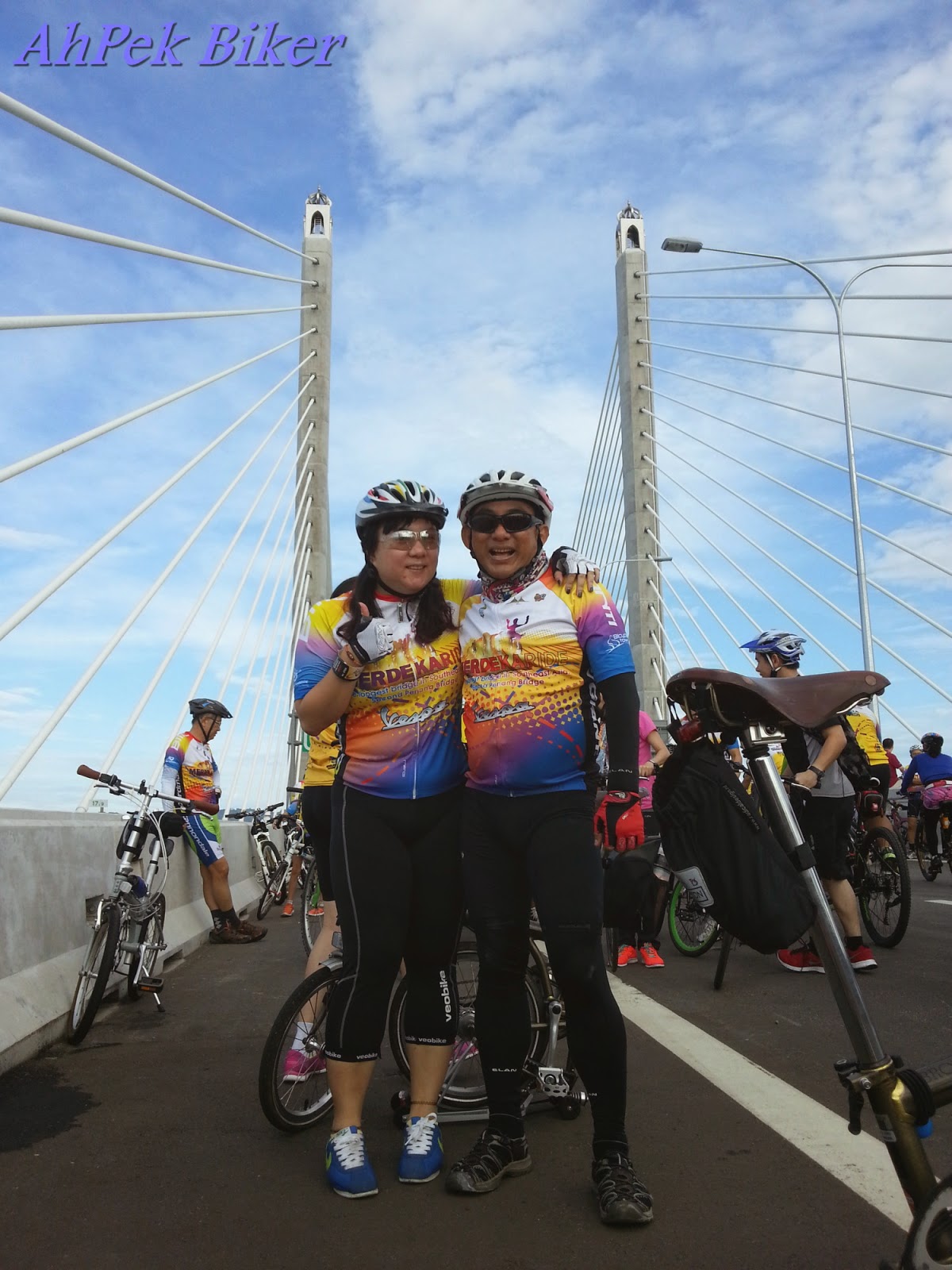 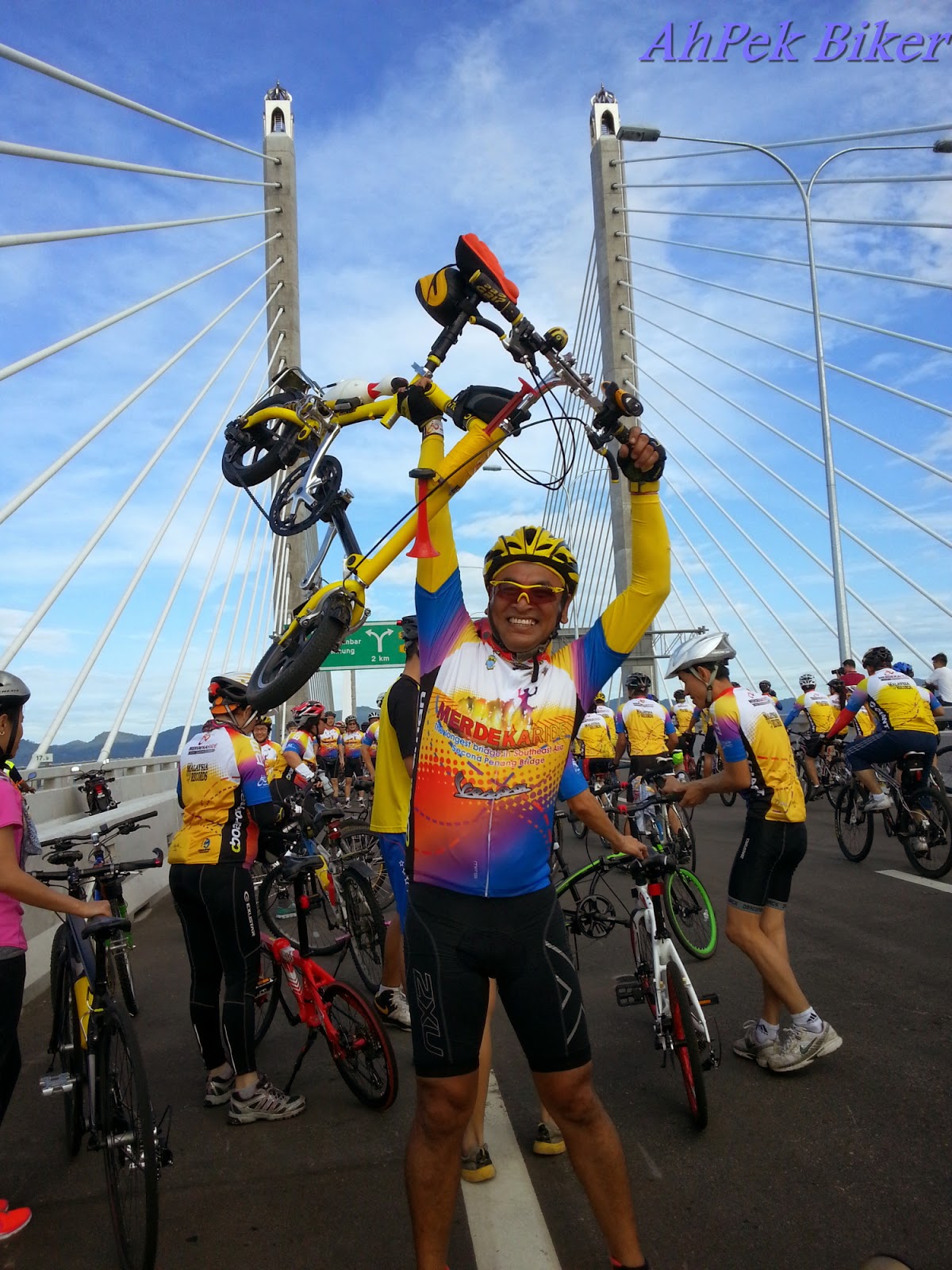 Our bicycles were not forgotten... 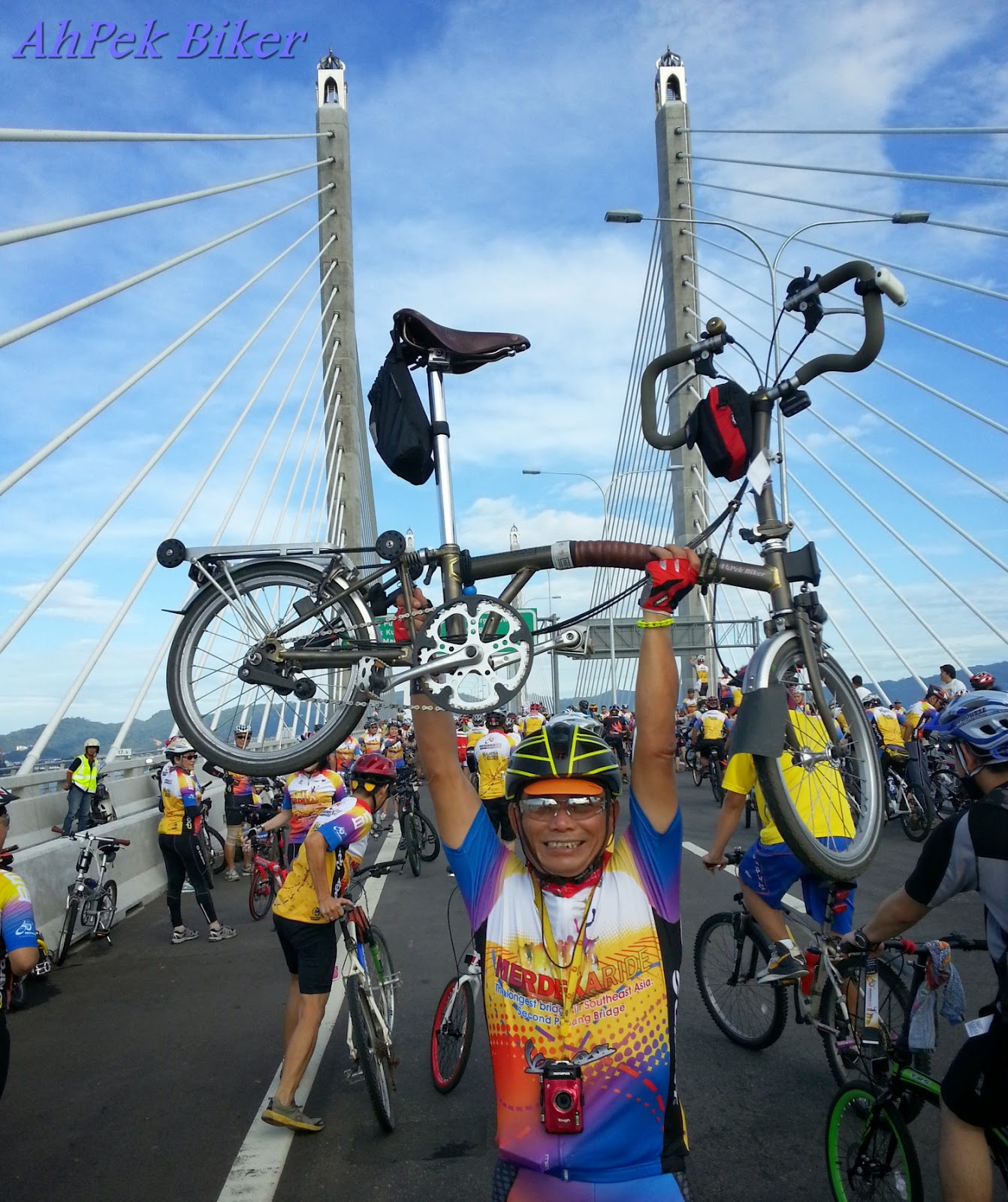 and neither was my Brompton. 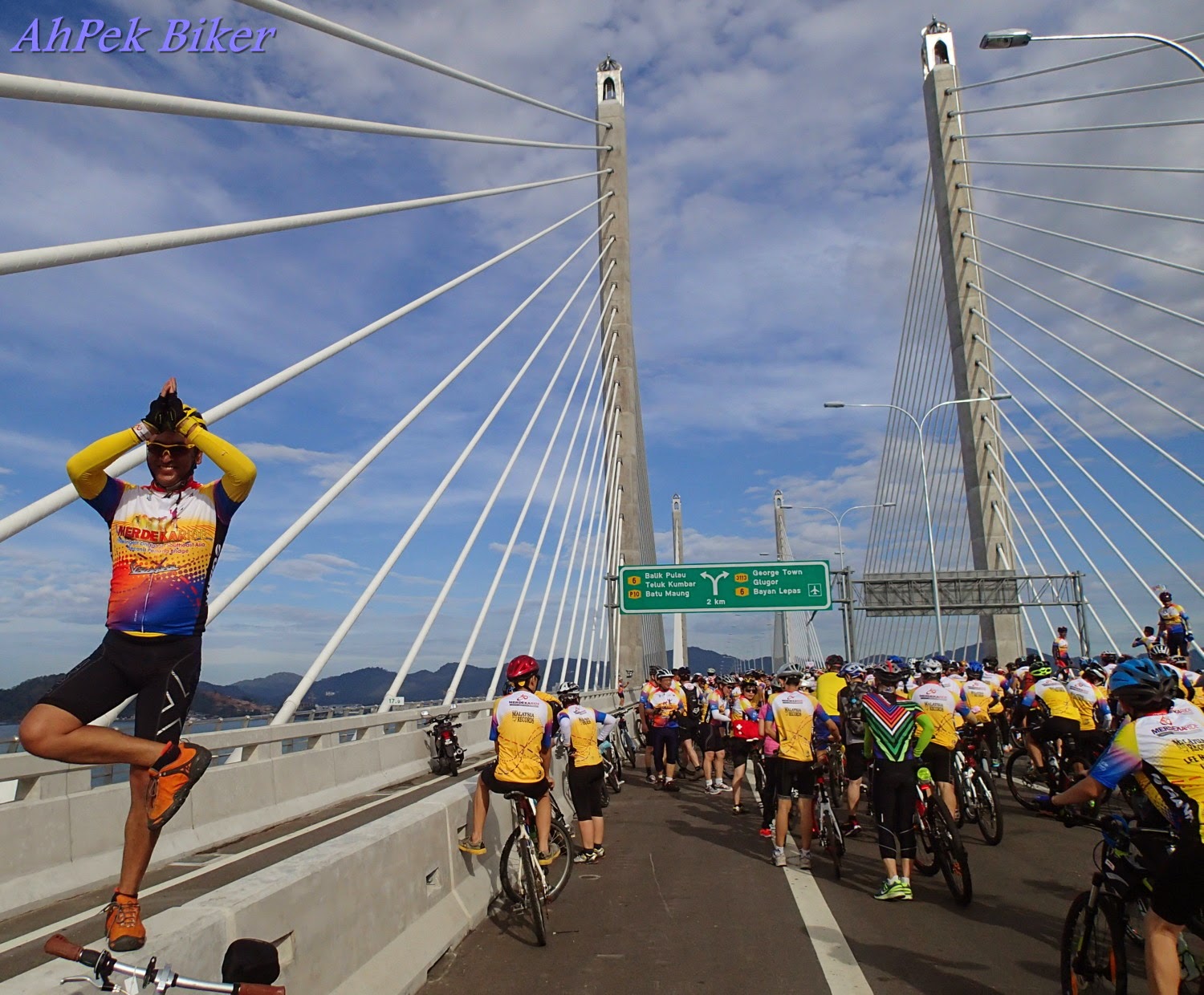 Some dance with joy on the dividers of the bridge. Oops! 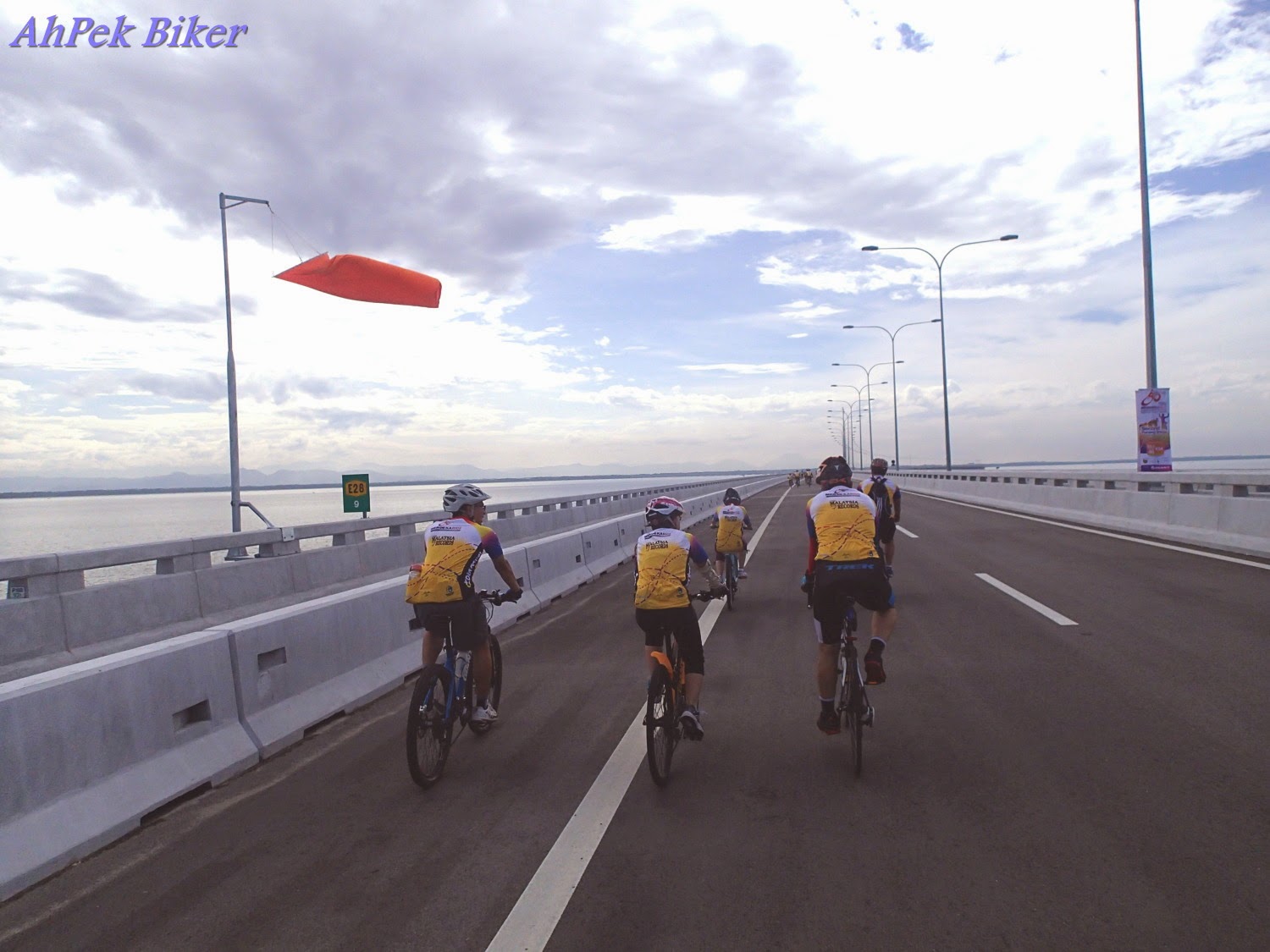 Time to ride back. Being in the sea, strong winds blew across the bridge and taxing us to pedal harder... 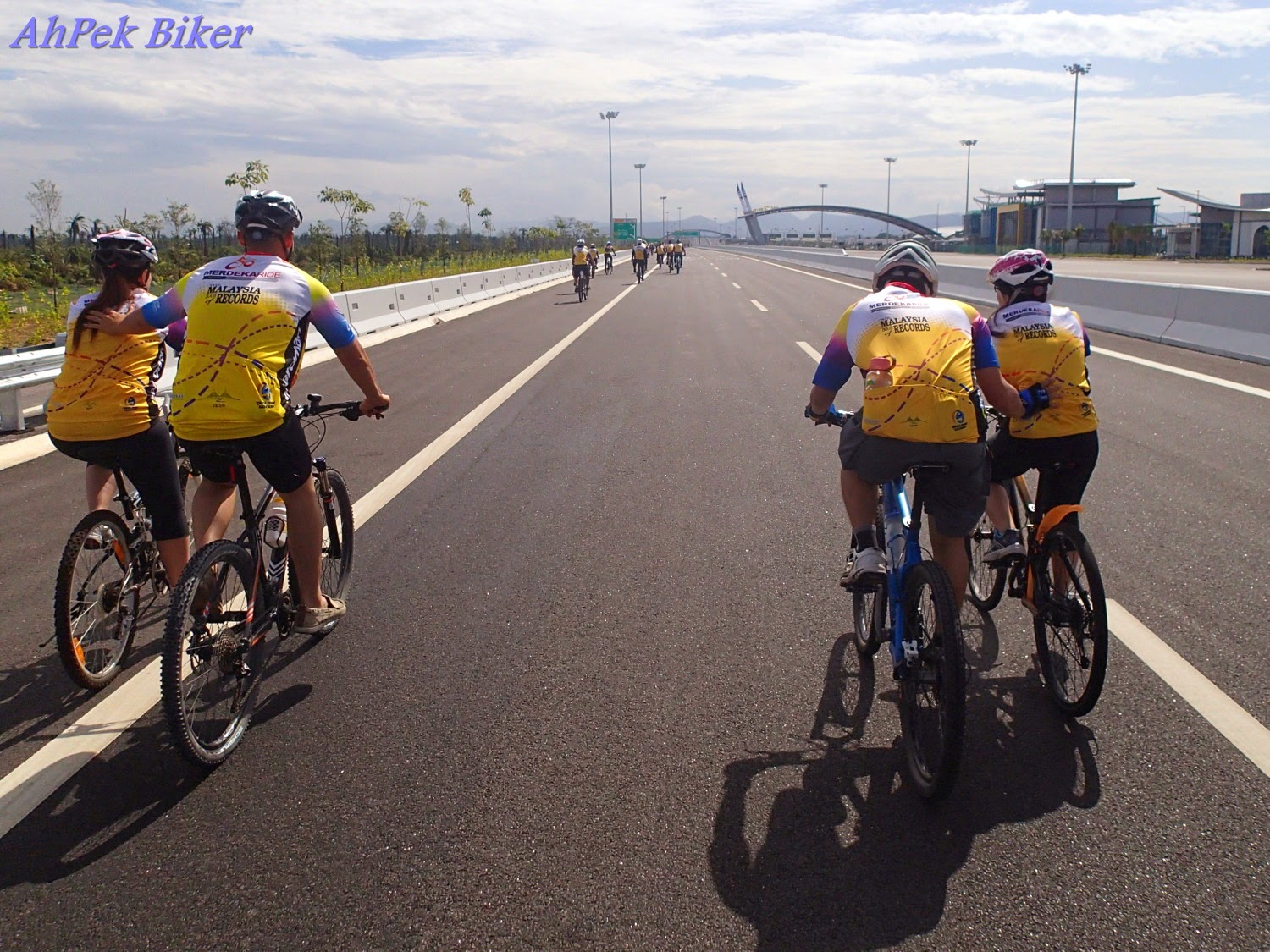 This strong cross-wind coupled with the relatively long distance made the return ride a struggle for some. The lucky few had a helping hand to push them... 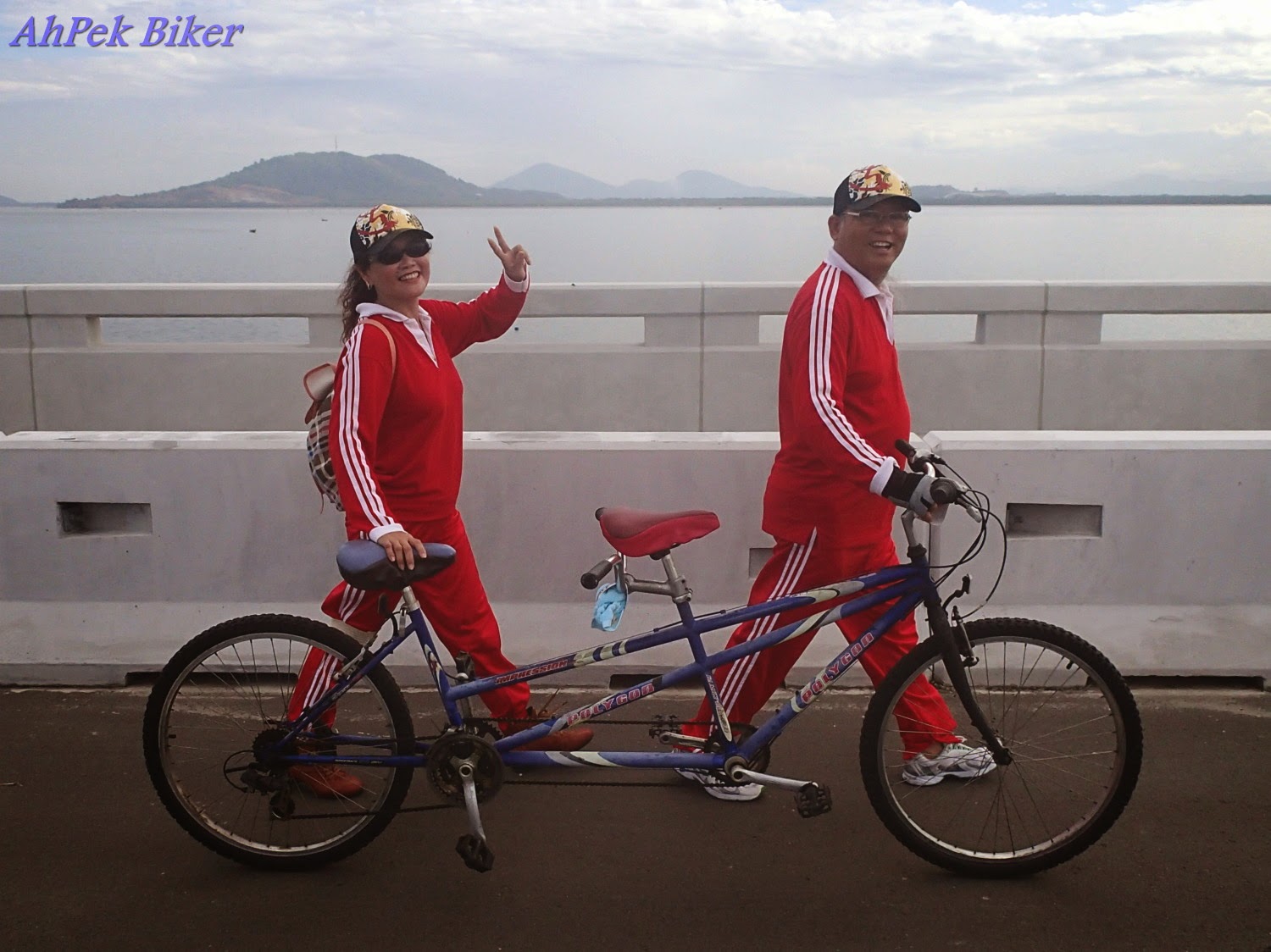 Others just came down to push... 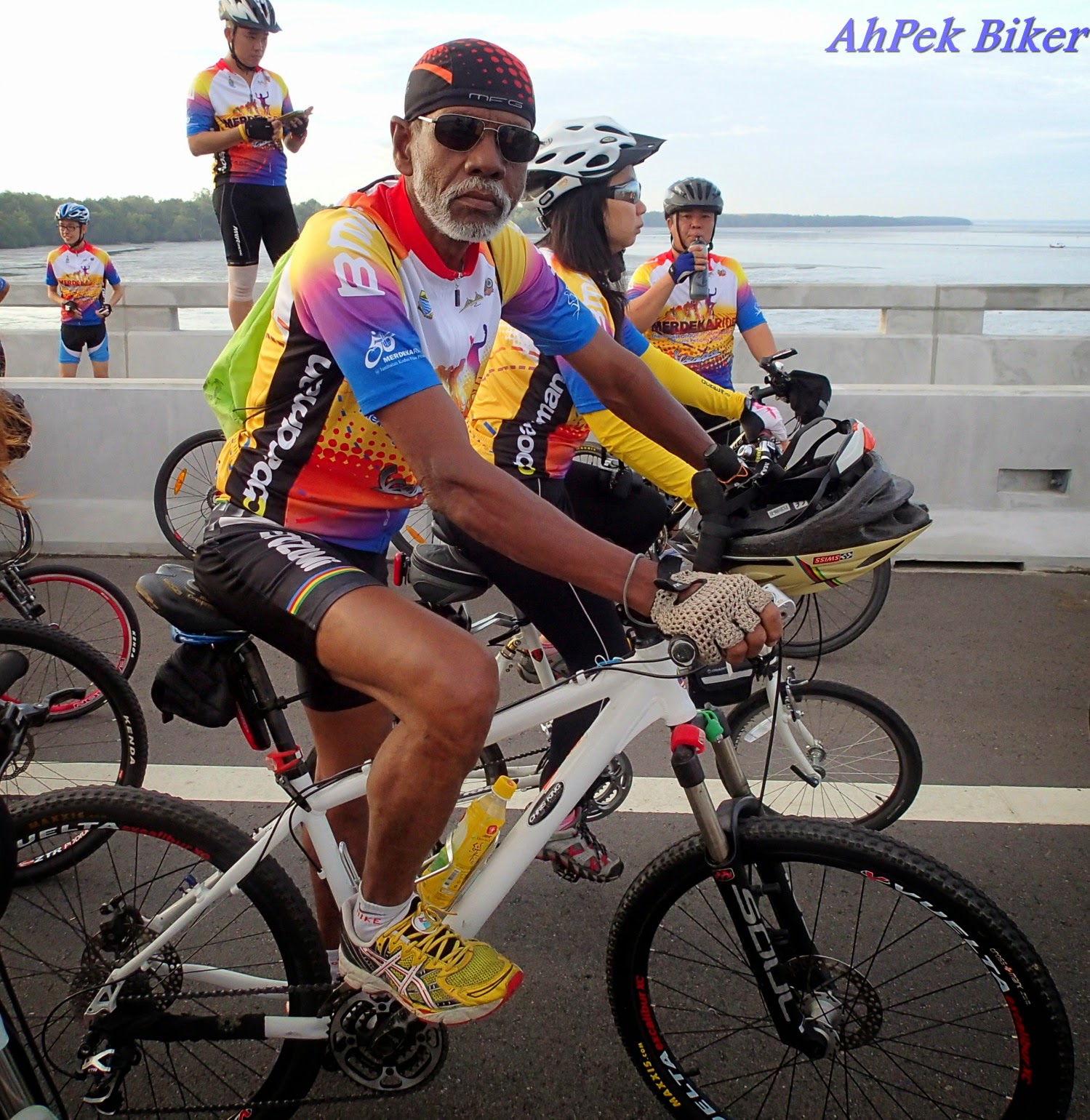 ... some cooly stopped to take a rest 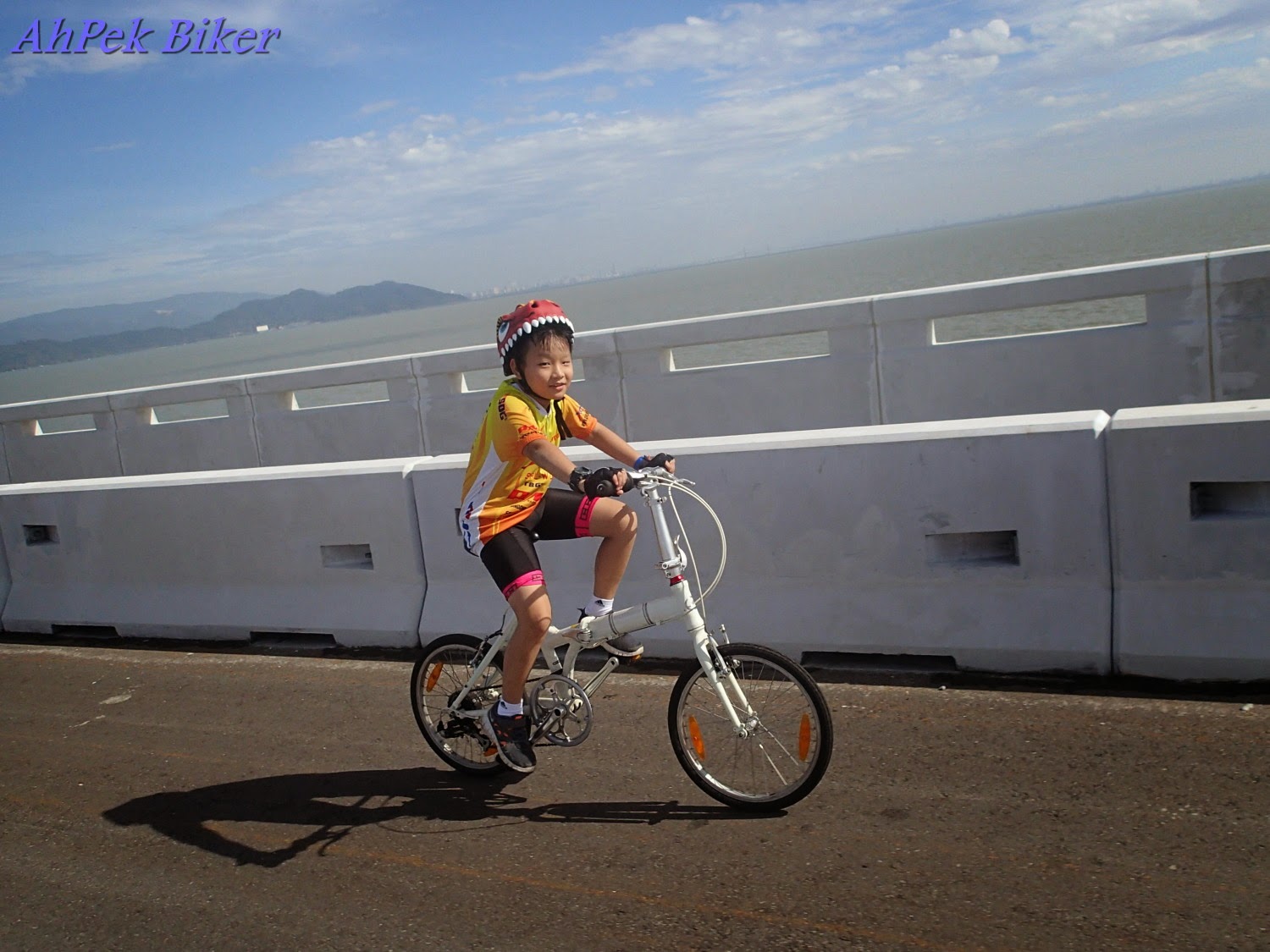 ... and a brave one doggedly pedalled on. 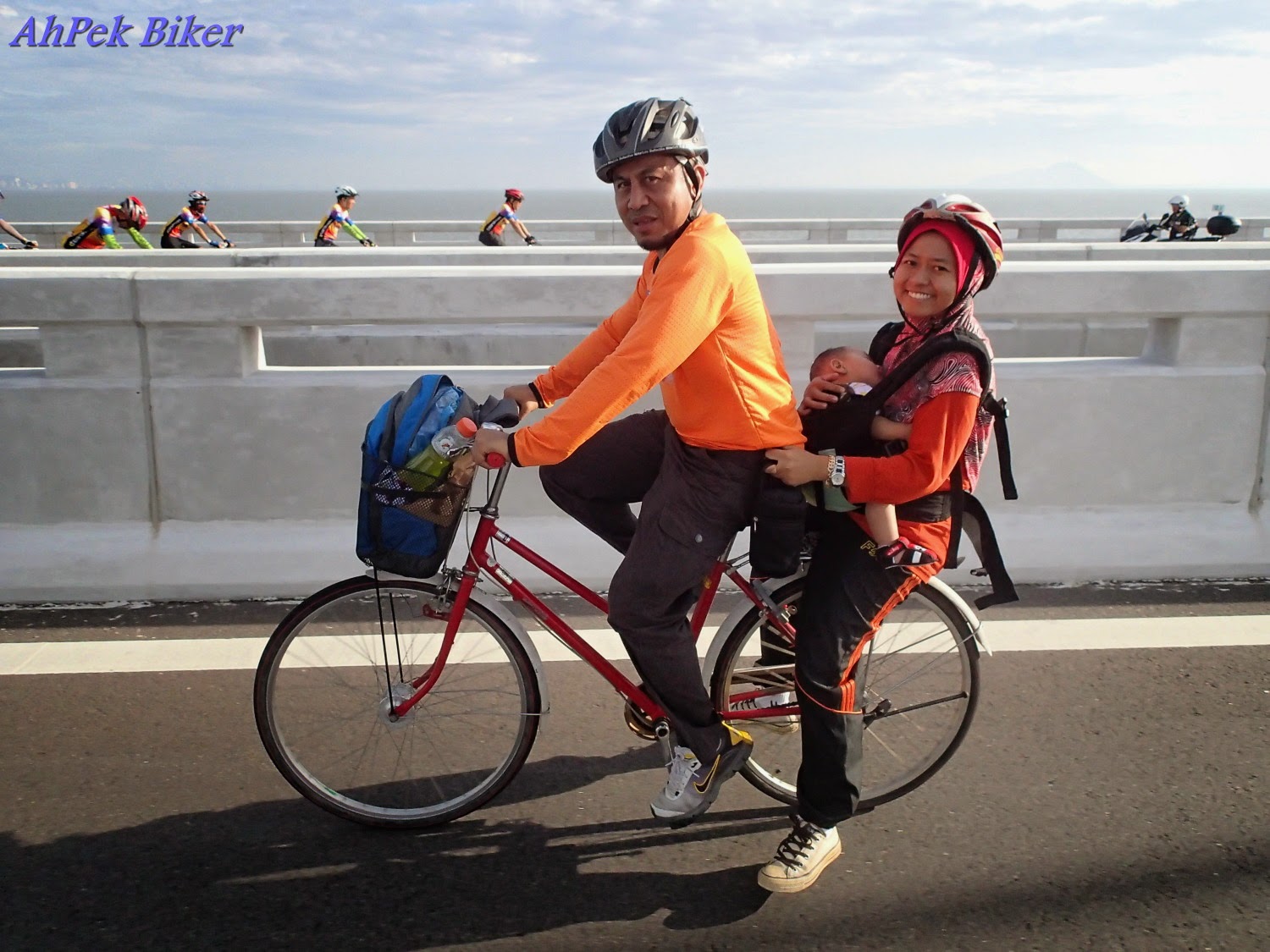 For some, it was a family outing. The young sleeping 'un will one day wake up to realize that he was part of history. 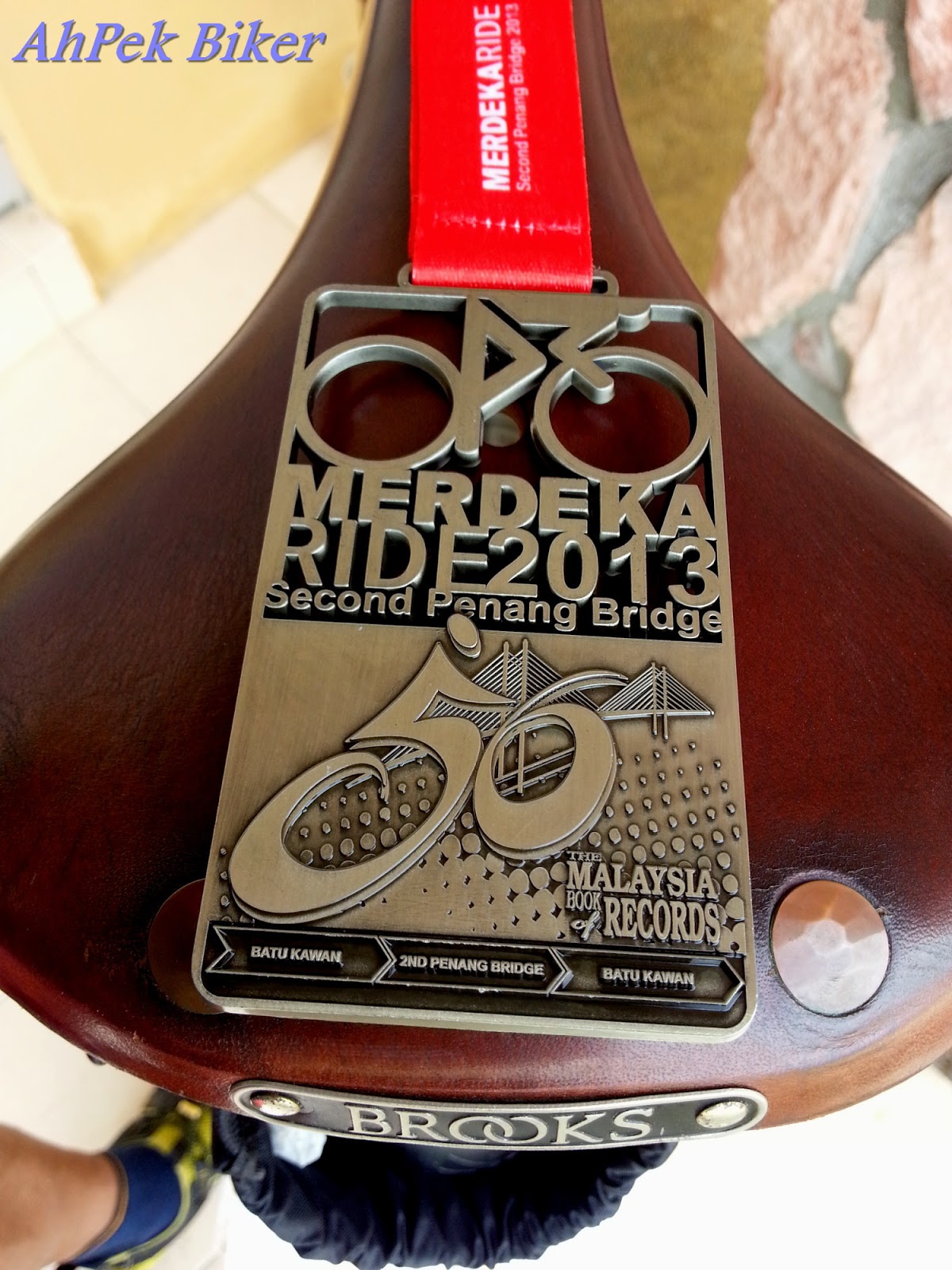 For all our sweat or smiles, this ride will forever etch fond memories.
Many thanks to the organizers.

You are at - Jotaro's Blog / AhPek Biker / Cycling Malaysia / Penang / The 2nd Penang Bridge Merdeka Ride
If you like this, view my other blogs at Jotaro's Blog
(comments most welcomed below. if you like this pls share via facebook or twitter)
Posted by Jotaro Zen at 5:06 AM