Selangor : Beyond Cycling - Riding With The Mapper 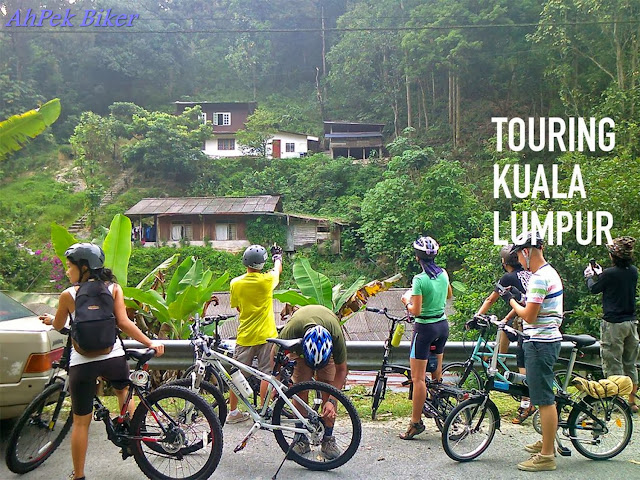 Route Recommendations :
1. The Kg. Sungei Pencala area is always a nice place to ride, it's green and cooling.
2. Except for the stretch at Jalan University and Jalan Gasing, most of the roads used were residential roads. 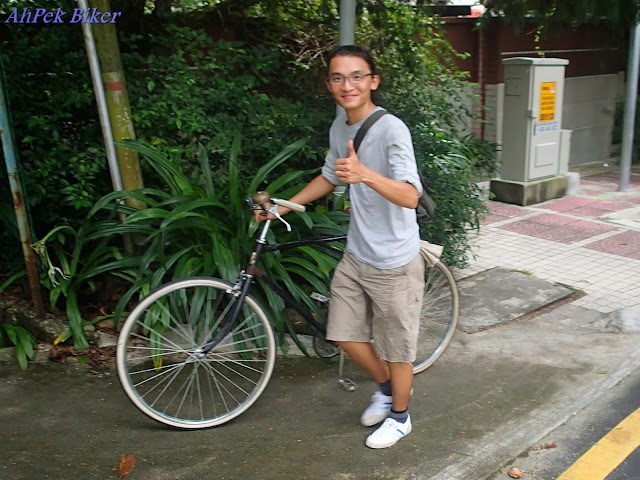 I have always wanted to ride with Machu Pichu of Village Bicycles. He's a conscientious cyclist, who has set out to make cycling have a mark in the country in his own way. That is by garnering for support for cycling and cycling lanes through his various rides to map out safe cycling routes in Kuala Lumpur and it's outskirts (... see the FB Group Cycling Kuala Lumpur, Bicycle Map Project). 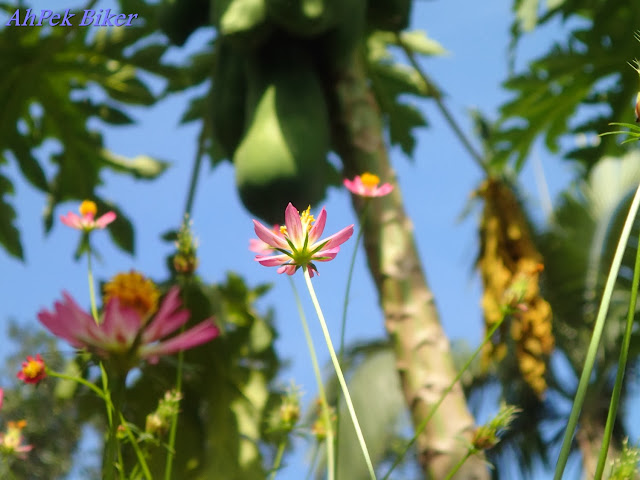 His latest endeavour is what he calls Beyond Cycling. Beyond cycling? What is that?
For some cycling is a means of exercising. Cycling at regular places, going round and round in circles, just for the pure reason of keeping trim and fit. Many of us have done more than this and have practised some form of "Beyond Cycling", i.e. cycling to find places of interest, places to eat, etc. 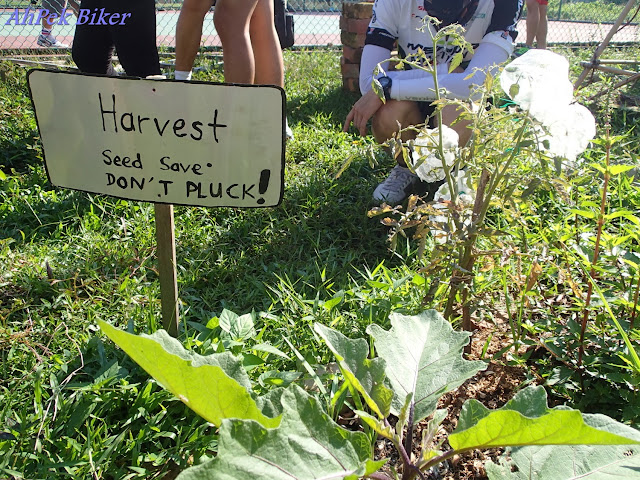 Machu is taking this to the next level, he is advocating a concept that will go beyond our Beyond. He is gathering support for his next project, getting cyclists to be go beyond the fun places, beyond the eating places. He's is trying to get cyclist to be aware of the environment and also be aware of history. In this ride that he will take the cyclists to bio-farms and Old Town Petaling Jaya for a brief history lesson. I have missed out on his mapping rides, I will definitely not miss this one.

THE RIDE
Starting from Taman Rimba Kiara in Taman Tun Dr Ismail we will ride to Kg. Sungei Pencala to study the kampung there. From there we will ride to Old Town, Petaling Jaya to look at the birthplace of Petaling Jaya, where it started in the 50's. En route we will stop at a few bio-farms, to see how they operate. 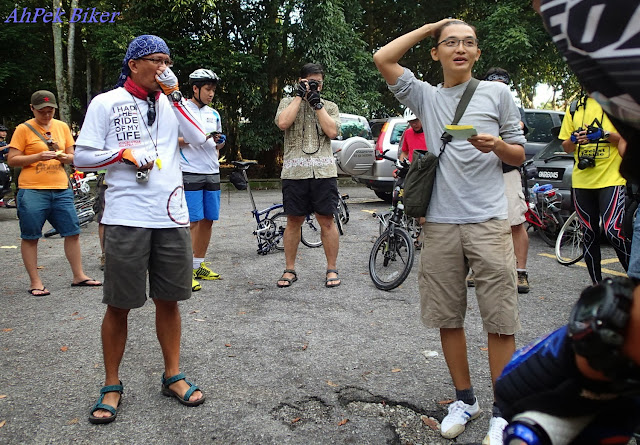 The meet up point was at Taman Rimba Kiara, TTDI. I was most surprised by the turn out, more than fifty cyclists! Looks like many subscribes to Machu's point of view too. Machu briefed all of us on what to expect during the ride, he even passed out leaflets showing the route and the various destinations; with elaborate write-ups of these places. 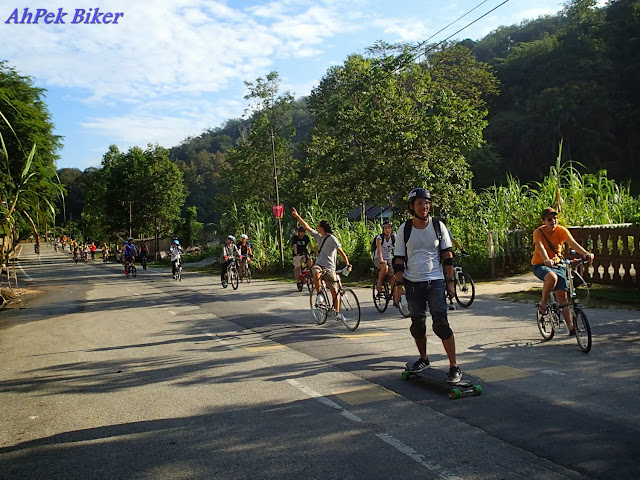 Kicking off and cutting through TTDI, within a short time we were into the adjacent Kg. Sungei Pencala. Riding here is always a pleasure, I should know as I stay in the vicinity and cycle here often. 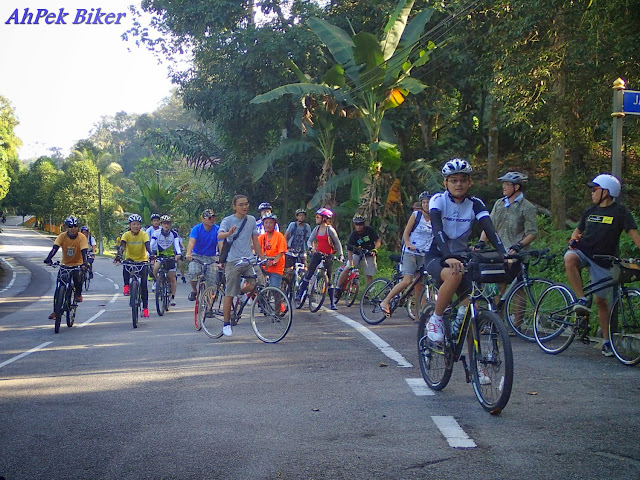 Why? Let's listen to what Machu has to say about this place. Stopping here, for a short briefing, in his words "Kampung Sungai Penchala is an allocation of Malay Reserve Land. Charming and almost pristine, the village life has only changed a bit although being so close to the suburbs/ city. A great model for resilience,..."
How true this is! Sandwiched between two major residential suburbs (TTDI and Desa Park City) the village has shown strong resilience to the influence of modern day's rat race. Here, the roads are quieter and the environment less harsh, with natural foliage growing between houses and at the foothills of Bukit Kiara. 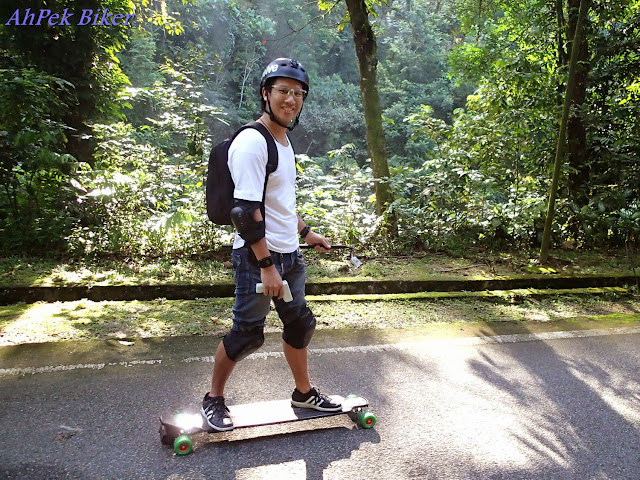 The ride not only attracted cyclists, but this guy too. He came riding in on a motorized skateboard. 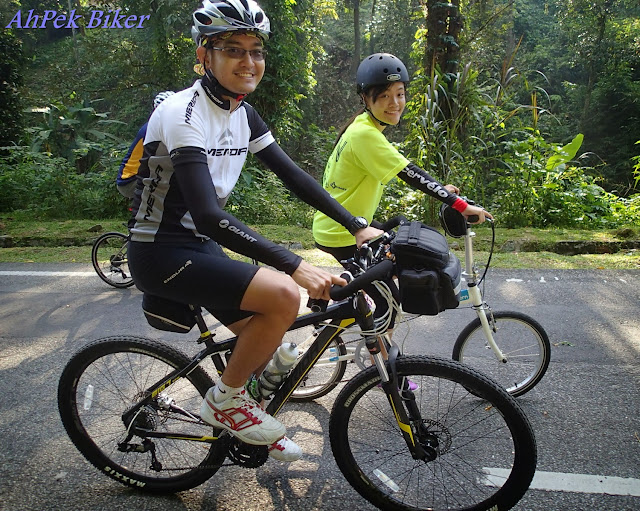 Another surprise rider was Jasmin, she had got to know me through my blogs and had asked for some advice then. When she came to introduce herself, I could not recognise her. Even after that it took me a while to recall. My apologies Jasmin, this old man's memory's going to the dogs!
Everyone seems to enjoy cycling in Kg. Sungei Pencala as the place has a uniqueness of it's own. The moment one enters the kampong the air seems cooler and smells fresher... (i.e. except for that big rubbish bin area just after the entry point from TTDI). 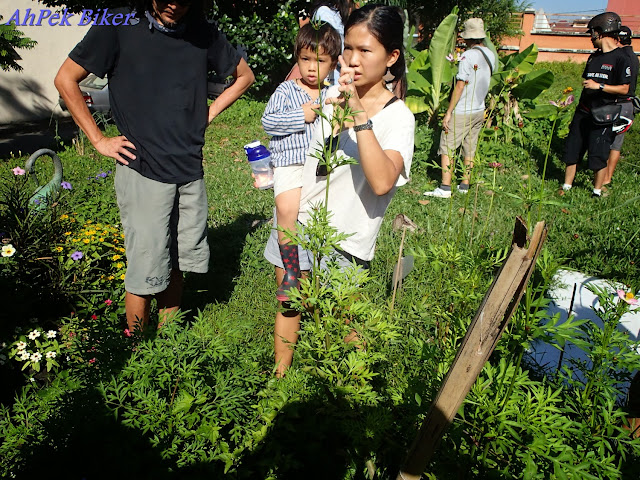 From the rustic setting of the kampong, it was back to TTDI again, to visit the first bio-farm - the TTDI EDIBLE GARDEN. This place is managed by Miriam, and it's amazing how she has done it while taking care of her own house and her young tot. In fact, the young fellow seems to be very at home in the vegetable plot. 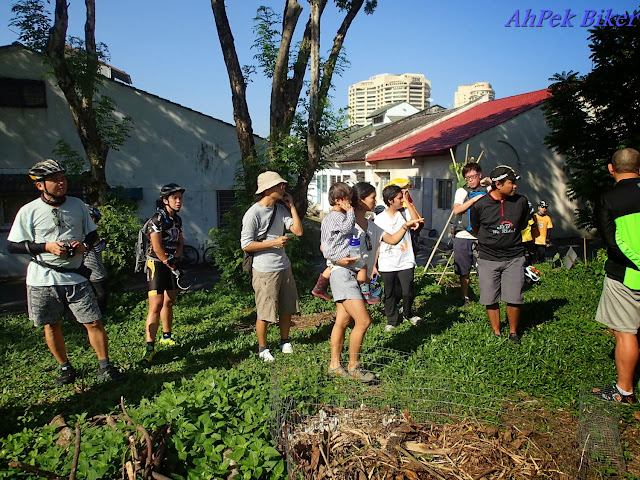 Miriam has turned the vacant council land between her house and the TTDI Community Hall into a small farm; planting it with vegetables, herbs and flowers. Her steely spirit reminds me of Wendy of Wendy's Secret Garden in Sydney (... see Cycling Sydney blog). 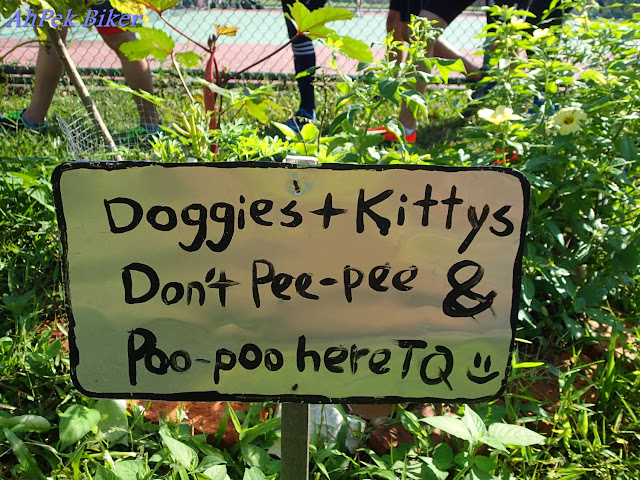 She has also done a pretty good job of balancing between planting on vacant land and motherhood. Signs like the above tells outsiders not to let their pets do their business on the land, but have been written in a way that draw her child's interest. 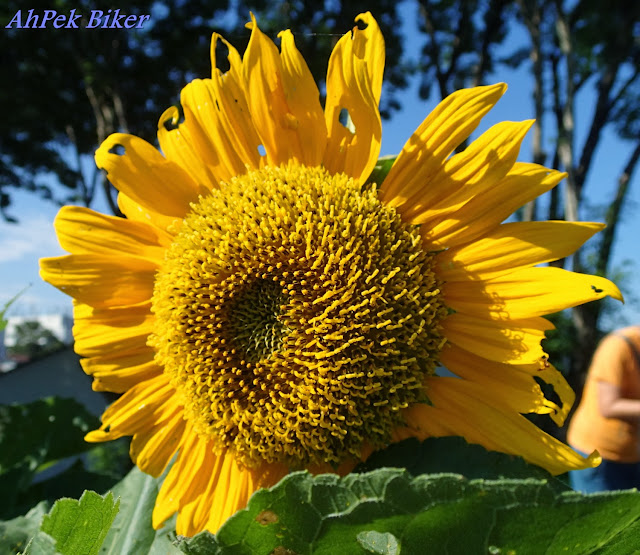 An example of her edible garden planting - a bright sunflower; beautiful to admire while producing seeds for eating and replanting. 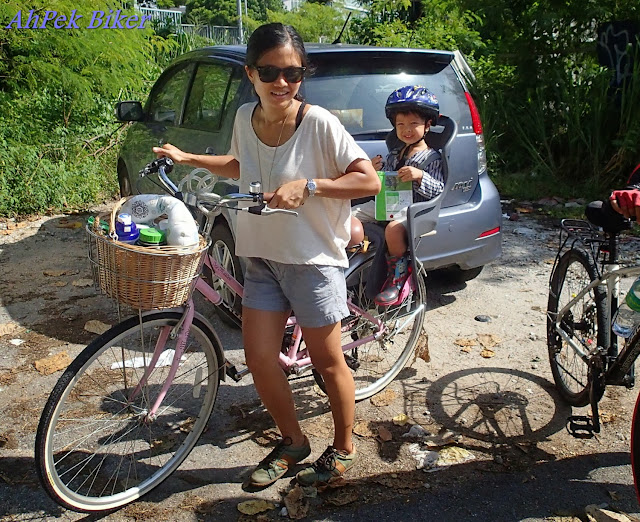 Being an avid cyclist herself, Miriam packed up some necessary things and followed us along with her child in a baby chair attached to her bicycle. Great! It always good to have children following us, it brings out the paternal/maternal care in us - i.e. looking out for Miriam and her son as we cycled on. And the little boy's cheery spirit sure did bring a lot of smiles to us! 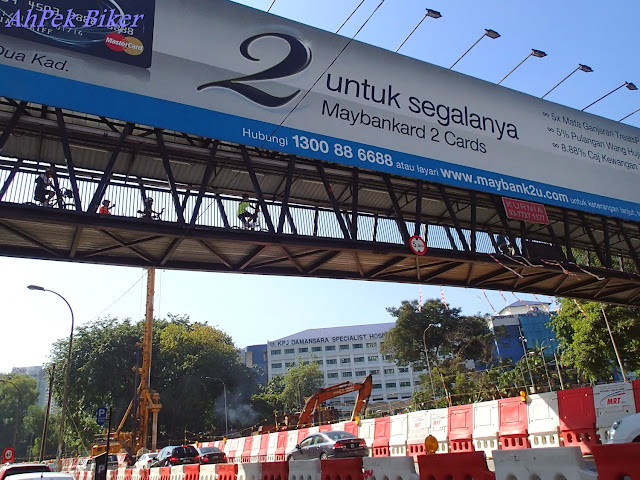 To head for our next destination, we avoided the busy main roads and used a couple of pedestrian bridges to get over them. The above is the TTDI Market bridge that crosses over the Damansara-Puchong Highway to Damansara Kim. 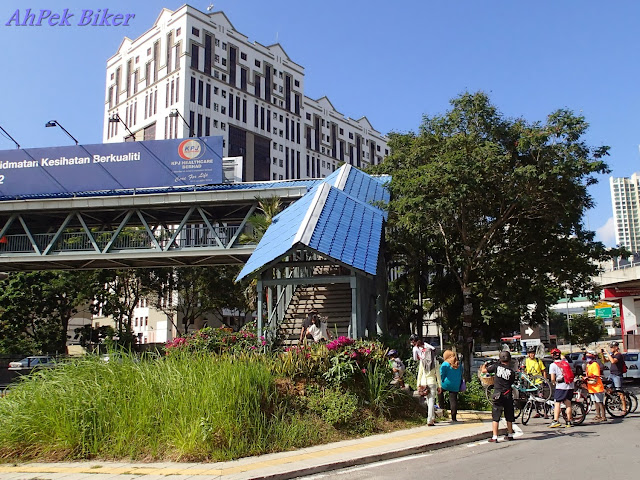 From Damansara Kim, to cross over the busy SPRINT Highway, we used another pedestrian crossing, the one near the Tropicana City Mall. 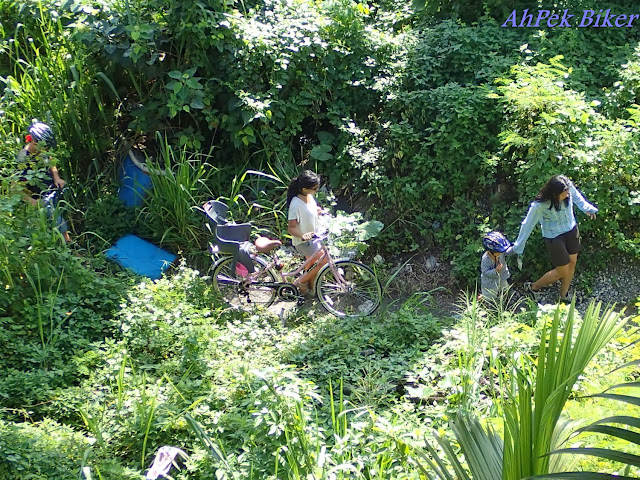 Unfortunately, the paths leading to and from this pedestrian bridge are just that - unpaved paths, mud tracks almost overgrown with foliage. Our close knittedness, became more apparent in such situations. While Miriam handled her bicycle, others led the little boy safely through the path. 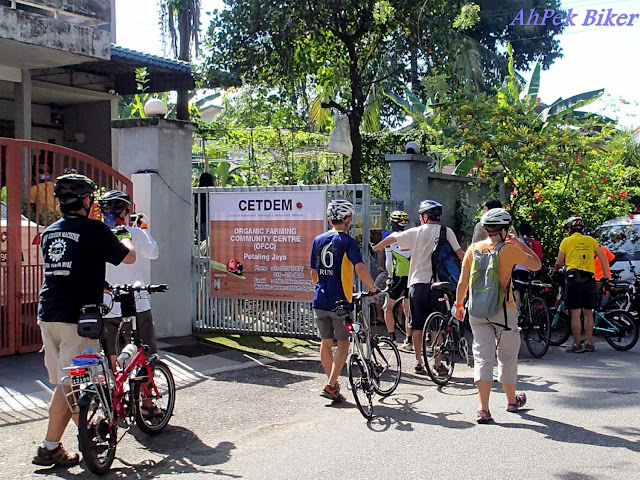 We are at the Organic Farming Community Centre (OFCC) in Section 19, Petaling Jaya. It's a centre supported by the Centre for Environment, Technology & Development, Malaysia (CETDEM). Terms like OFCC and CETDEM were unknown to me and perhaps to most of my cycling compatriots too. But this is an educational ride, and we are picking up new things as we went along. Now we know about these acronyms, and more importantly the concept that they represents. 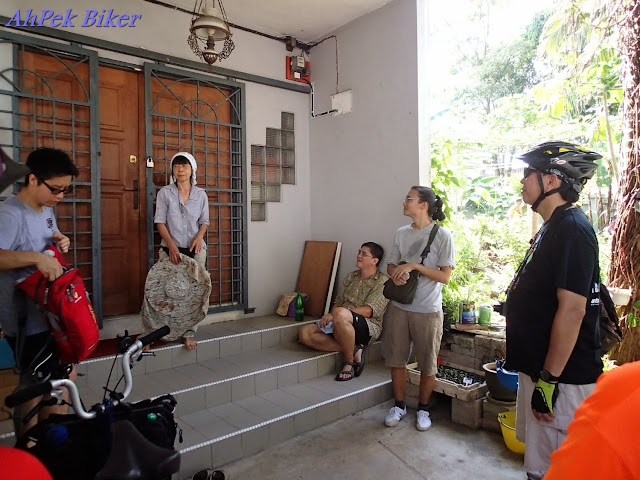 Before showing us her farm, the lady operating the place gave us a short talk on organic farming, her organisation, etc. This bio-farm is situated at the end of a row of terrace houses, an end-lot that has a fair piece of land at it's side. Yes. These organic farms that we are visiting are all located in suburban areas, at locations where they will have the most impact on the neighbouring communities. Perhaps by their examples, they can impart these knowledge to their neighbours. 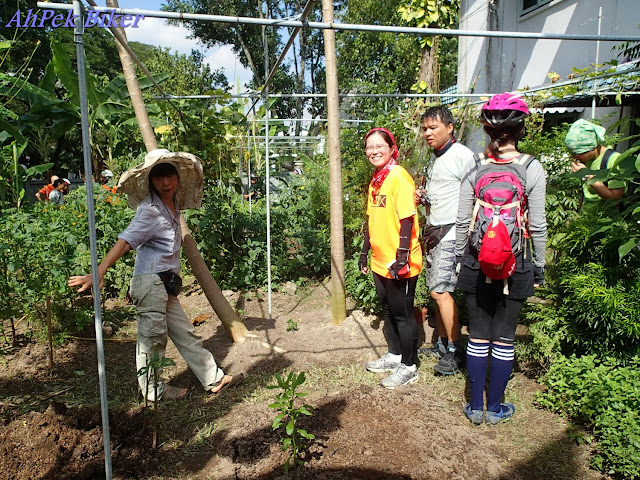 More detailed explanation were given in her little farm - what type of plants, how they do it with organic fertilizers, etc. 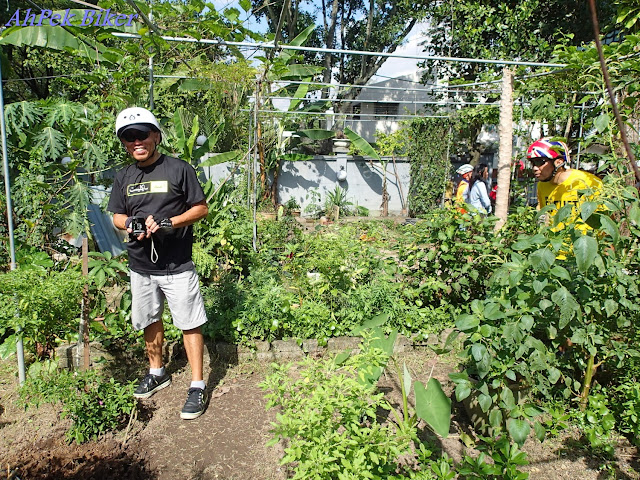 Here too they have carried out a range of planting - vegetables, herbs, flowers... 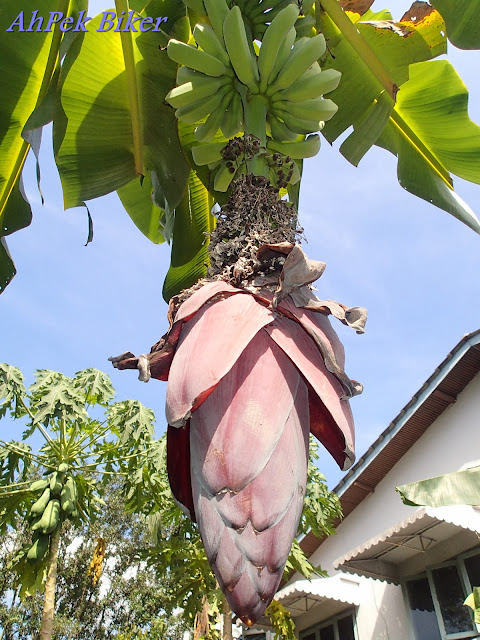 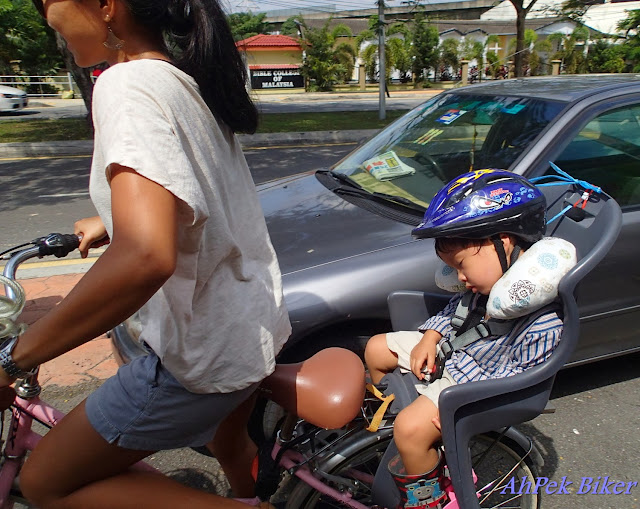 From Section 19, we took a longer ride over to the other side of Petaling Jaya. This was through Section 17, then along busy Jalan University and Jalan Gasing. The longer ride and swaying motion of his mother's cycling lulled the young kiddo to sleep, with his head nodding off and away from his seat. Fortunately, mummy's ingenious and got a rafiah string to tie his helmet to the seat so that he does not keel over.
I was doing sweeper duties, due to the group being large some of us at the rear lost touch with those in front and were cycling on our own. Because of this we missed the talk at the Section 17 and also the one at Old Town Petaling Jaya. 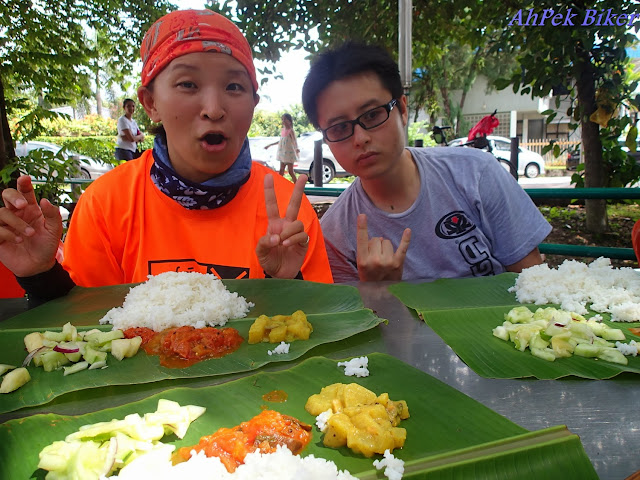 Might as well have lunch while waiting for the others. This was at Raju's Banana Leaf Rice.
When the rest of the gang came back to re-group, some had to go over to a nearby coffee-shop to eat as Raju's just could not accommodate all of us. 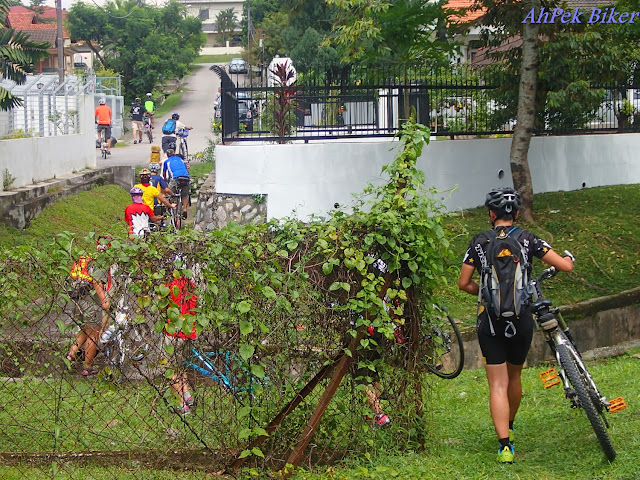 Through a small bridge and riding along side a small drain, we took a shorter route towards our next destination. It is short cuts and safe cycling routes like this that Machu has plotted out in his Kuala Lumpur Cycling Map. 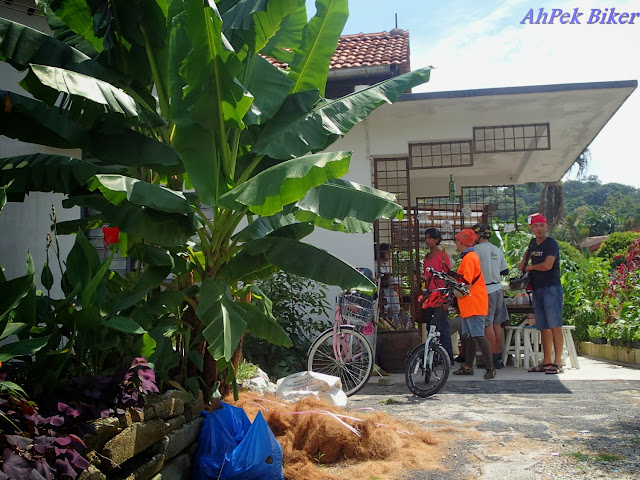 Eat, Shoots & Roots is located at a single-storey semi-detached house in Section 5 Petaling Jaya. A young lady, Shao-Lyn, together with a few friends run this place. 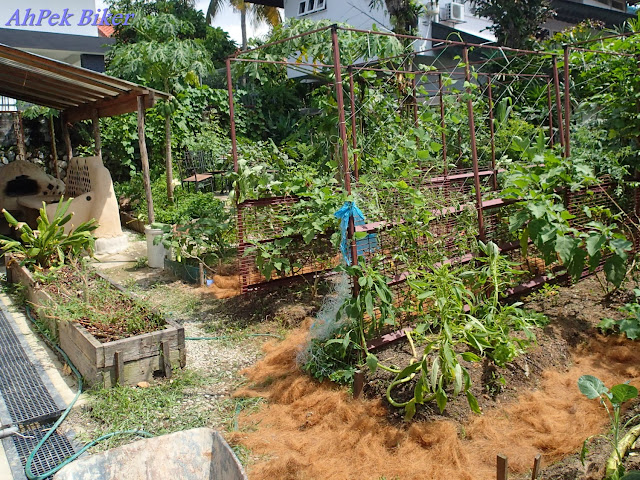 Organic farming is carried out here too. They make their own compost, etc. 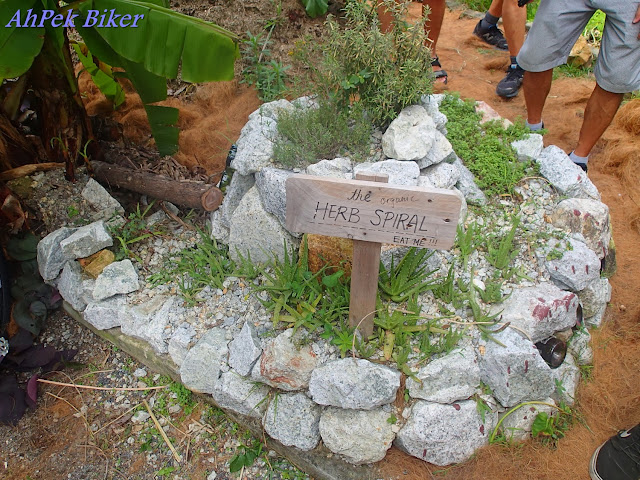 This is the Herb Spiral. When it rains, water flows down the spiral, with more water collecting at the bottom. The herbs at the top need less water than those at the bottom, so the whole system works well. A simple yet natural gadget. 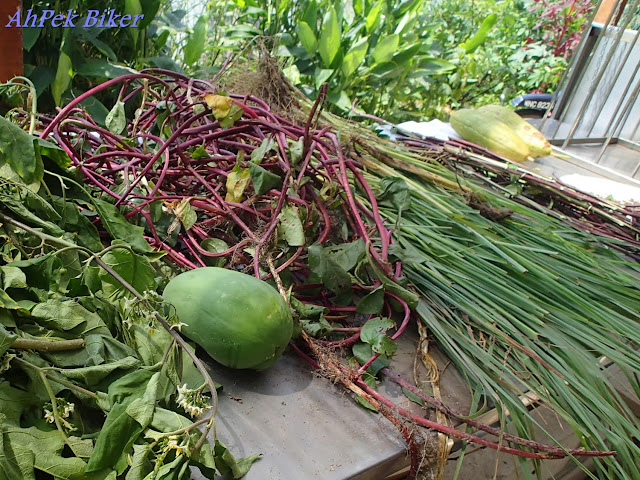 The harvested herbs, vegetables and fruits were laid out on a table. I was most glad to see people coming in to buy these, looks like their reputation is well known around here. 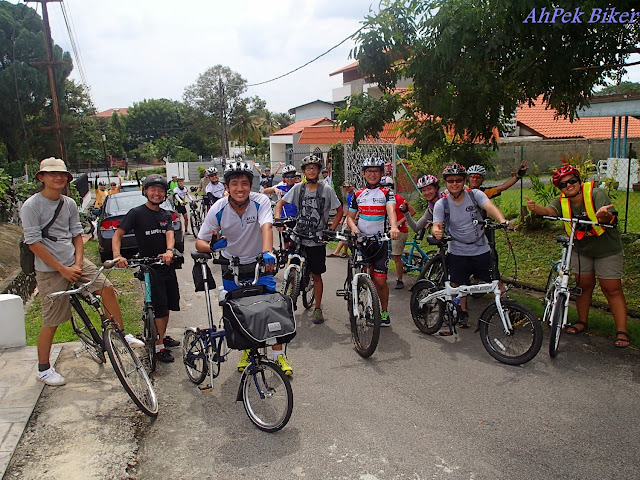 Hey! It's all smiles here! All glad to have cycled and at the same time learnt something new.

You are at - Jotaro's Blog / AhPek Biker / Cycling Malaysia / Kuala Lumpur-Selangor / Beyond Cycling - Riding With The Mapper
(comments most welcomed below. if you like this pls share via facebook or twitter)
Posted by Jotaro Zen at 7:13 PM