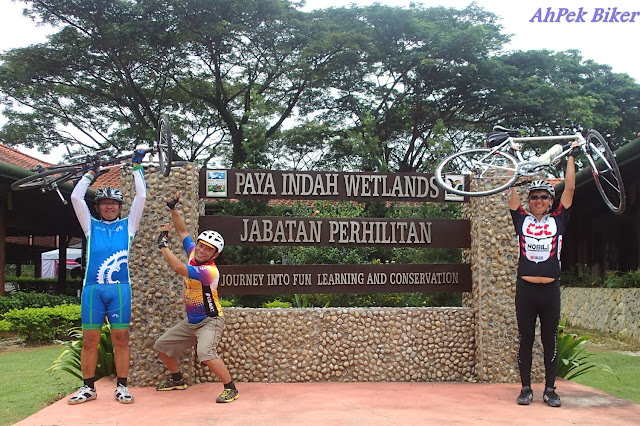 Route Recommendations :
1. Ride route is fairly flat, with slight slopes nearer Paya Indah.
2. Time your ride so as to be able to reach the wetlands in time for the feeding of the hippopotamus and crocodiles.

We were at Dataran Putra in Putrajaya to help a friend in some photo shoot that required cyclists in a promotion brochure. The shoot involved a very, very short ride from Dataran Putra up and down the Core Island Boulevard for a distance of only three kilometres.
At the end of the ride, our legs were hardly stretched and we were itching for more.

That was when Chin suggested that we ride to the Paya Indah Wetlands, a distance to and fro covering forty kilometres. Now, that's more like it! More to our standards. And there will be extras, Chin added. There will be animals to see there too!
In the past, I have rode to beaches to view sunsets, to waterfalls to enjoy a swim, to a fish sanctuary to bond with nature. Riding to a zoo to see animals, now that will be a first!
But the Paya Indah Wetlands is more than a zoo, it turned out to be more interesting! Read on to find out ..... 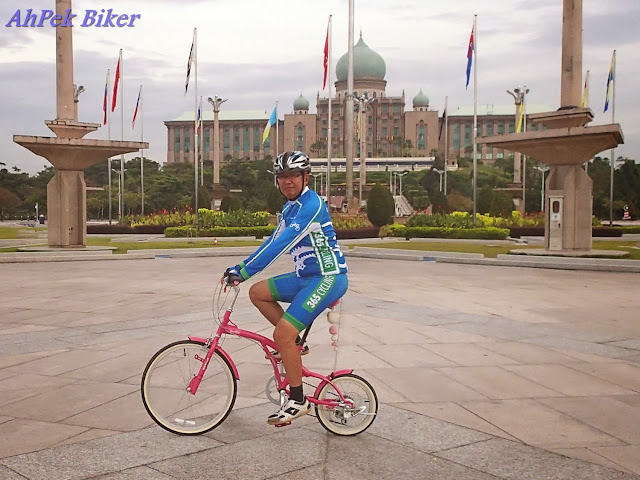 Oh... By the way, one of the photo-shoot participant was riding this cute Garion Rainbow Classics bicycle. It was an odd looking bike with a 26" front wheel and 16" rear wheel, which kind of reminds us of a Penny-Farthing. Chin here was giving it a trial ride, his comment - steering is tight, need some use to get the balance well.
Well... fun time  is over; time to stretch our legs...
TIME TO REALLY RIDE!!!

Ride Route : Putrajaya>Dengkil>Paya Indah Wetlands>Dengkil>Putrajaya.
Our route will take us from Dataran Putra pass the Putrajaya International Convention Centre through Dengkil and then onwards to the Wetlands. 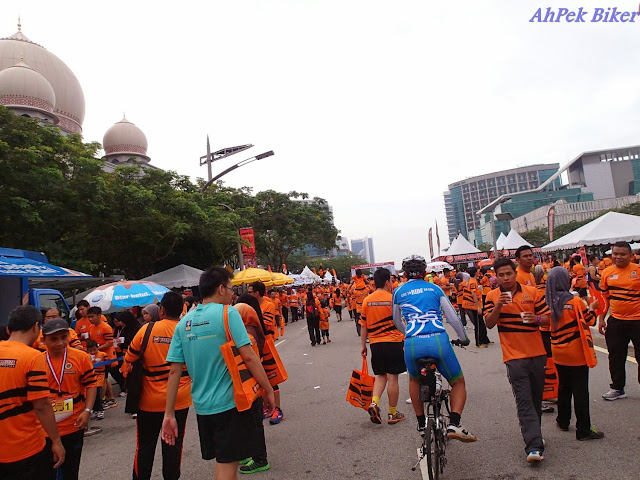 Chin was familiar with the route and will be leading Jason & me. Heading off from Dataran Putra, we rode through the central Boulevard of the Core Island. This particular Sunday, there was much going on in Putrajaya, and passing the Palace of Justice we had to ride with care to avoid many people who had just finished a running event. 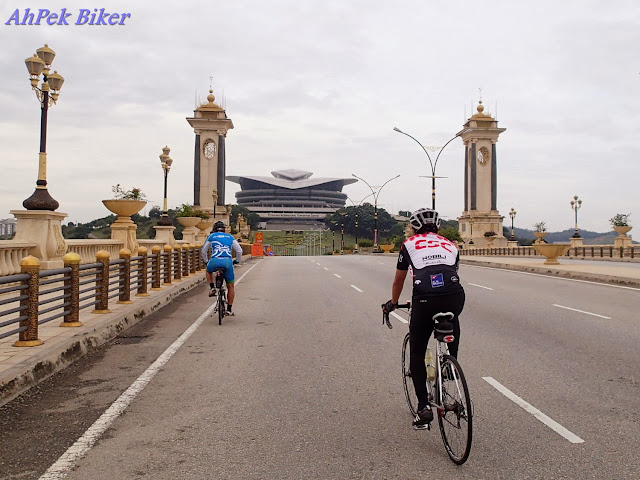 At the far end of the Boulevard, we rode on the Seri Gemilang Bridge. Ahead is the Putrajaya International Convention Centre where we will be making a right turn. Beyond that point it will be unknown cycling territory for me. To meta-phrase James Kirk of Star Trek - "Going to where no AhPek has gone before". 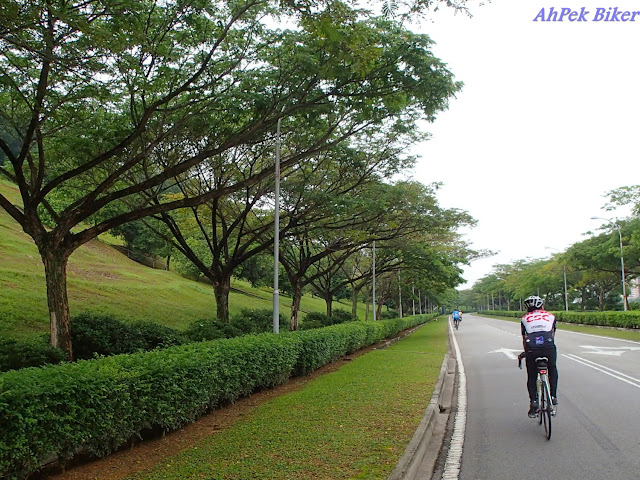 We are now in Precint 20 of Putrajaya, surprisingly this is a nice place to ride. The roads are shady and, being an outlying area of Putrajaya, almost devoid of traffic. This will be a peaceful ride or so we thought ... until... 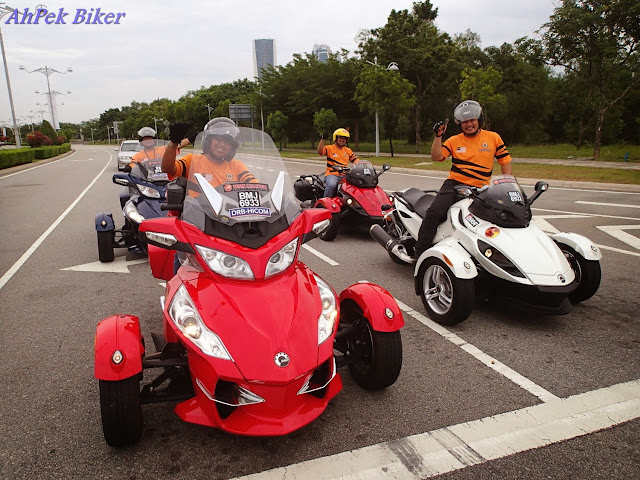 Suddenly.... Vvvrooommm, vrooommmm! A loud noise came approaching us from the rear. A group of tri-motorbikes had the same idea as us, ride on these smooth roads!
These Can-Am Spyder RS-S mean looking machines that they are riding look sleek and sporty. Tempting, shall I upgrade from my bicycle to these? 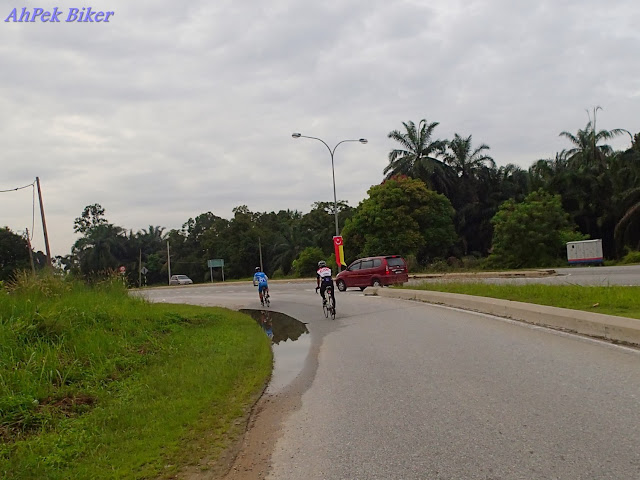 Not to far ahead, the road veered left and joined up with the Dengkil trunk road. Okay, we are back to heavy traffic zone, better ride with more care. We are riding quite briskly, hoping to reach the wetlands by 10am, that's the time they feed the hippopotamuses. 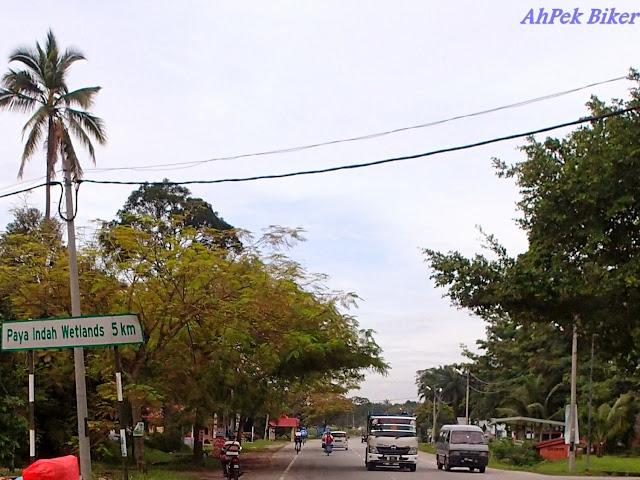 At Dengkil, just opposite the police station, we made a right turn into Jalan Banting. The traffic here is quite heavy, fortunately there is an emergency lane for us to cycle on. Part of this road has some gentle slopes, good for us - we can sweat it out more. 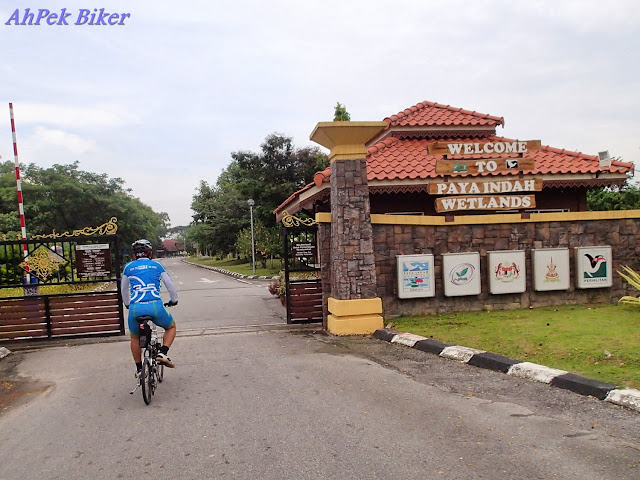 10:15am - We are at the Paya Indah Wetlands! In a rush to try to catch the feeding of the hippos, Chin gave a shout to the guard that we will return to register later. Visitors are required to register at the guard-house or the reception building. 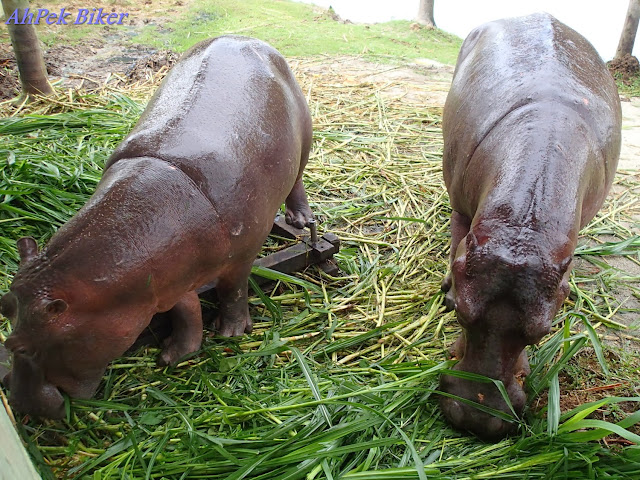 Fortunately for us, feeding time had just started. Here's Baby Hippo and Mama Hippo feeding on some elephant grass to build up their appetite. 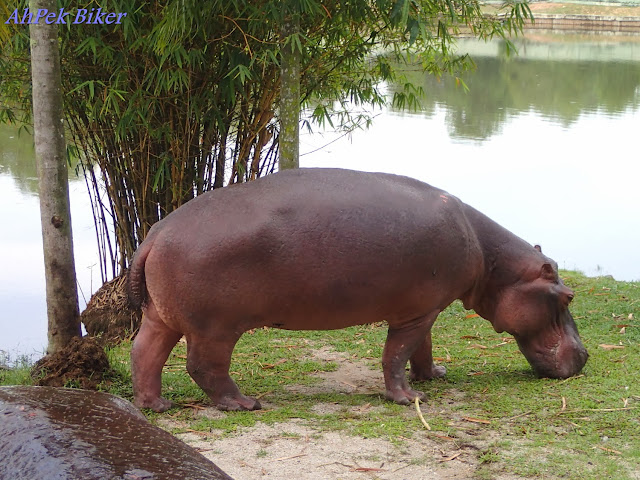 Papa Hippo was a bit stand-offish, staying some distance away unbothered by the public's attention. 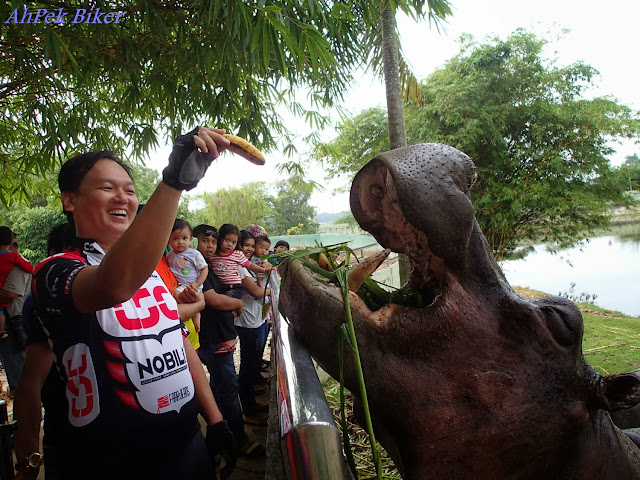 The good thing about this wetlands is that the public is allowed to participate in the feeding of the animals. Here's Jason feeding a banana to Mama Hippo, keeping his hands clear off the hippo's mouth. 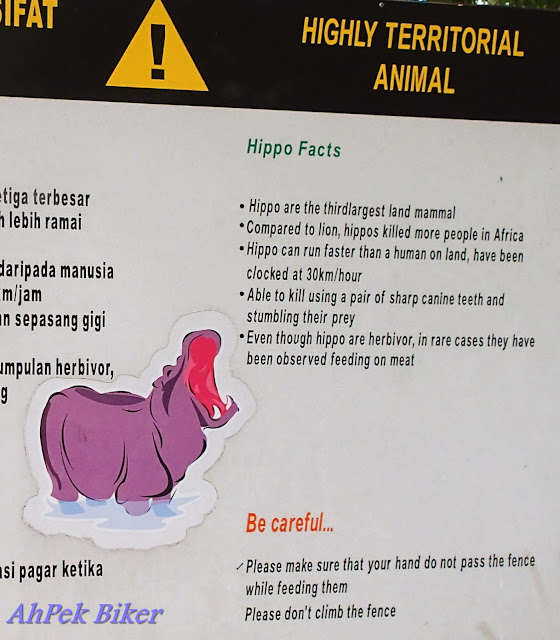 And he has reasons to be careful; a sign nearby warns of that hippos although looking docile can be quite territorially fierce. Better to be safe than sorry. 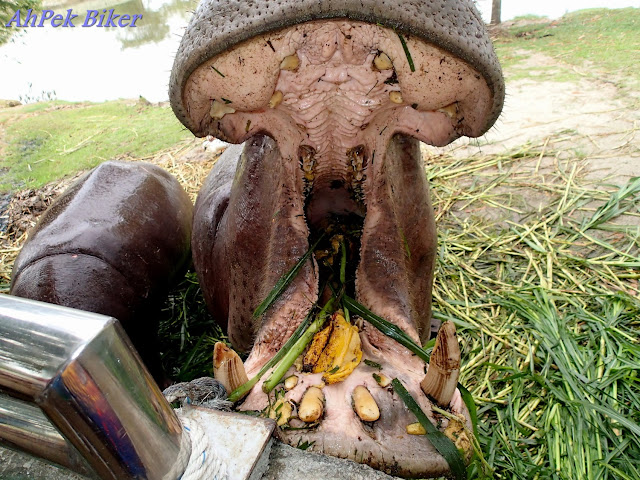 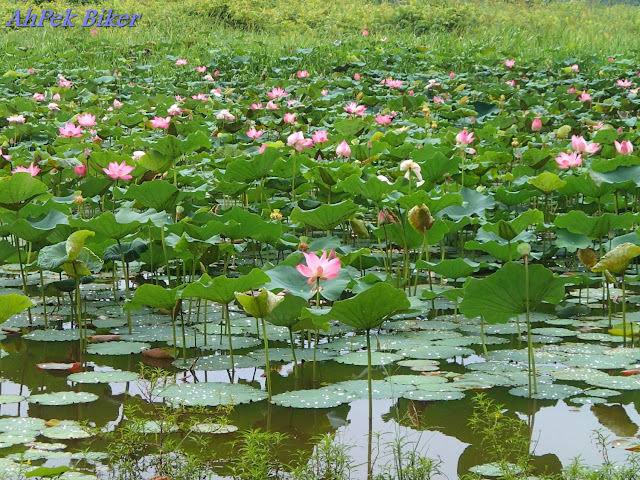 The next feeding is at eleven; with time to spare, it's time to walk around and admire the wetlands park.... lotus pond full of pink blooms! 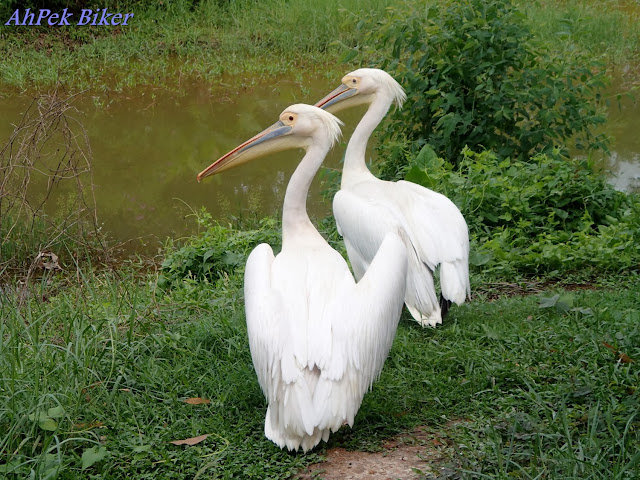 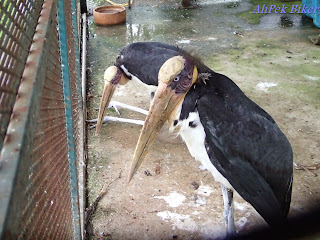 Sober looking African storks... they look so serious, like undertakers. 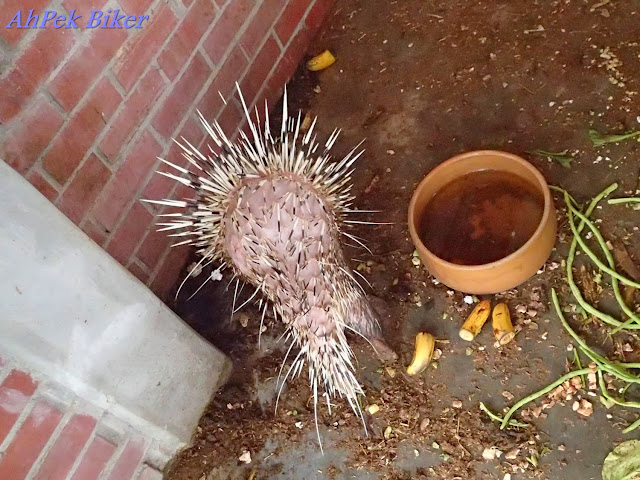 A porcupine baring its spikes, is it getting ready to shoot or just showing off... whatever the case is I better step further away.


Don't get the wrong idea, these porcupines can be friendly. They are even let out for visitors to feed them. This one is seen nuzzling like a puppy. 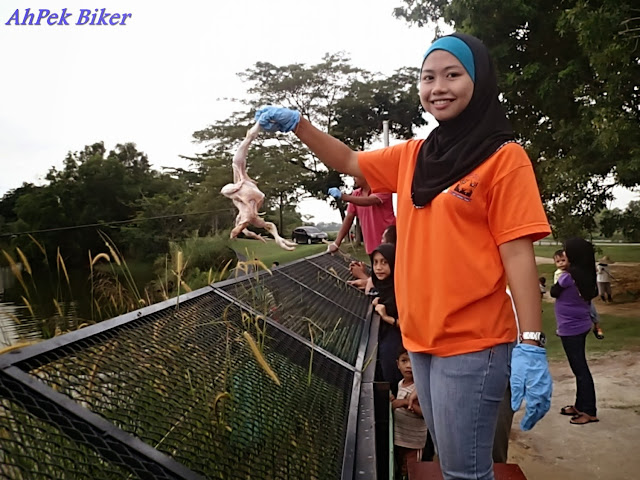 11:00am - IT'S CROCODILE FEEDING TIME!
Understandably,this time the public are not allowed to feed the crocodiles, a couple of the park's staff will be doing the feeding. 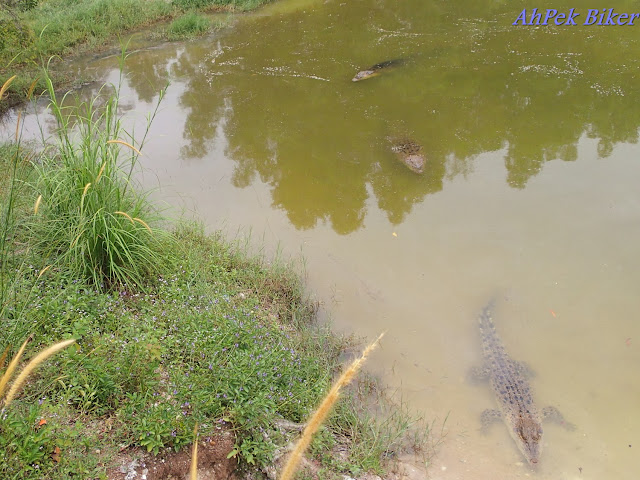 With a shrill blow of a whistle, the crocodile came swimming close to the feeding ground. There were about thirty of them, except for their snouts most of them were hardly visible from afar.

The chicken was rolled down a cable hook, and sometimes a more active crocodile will jump up to snatch the chicken in its jaws. This is really a sight to behold, the crocodile in mid-air, jaws wide and snapping onto the chicken.

From the top of a nearby viewing tower, I gazed afar. Yes, Paya Indah is indeed a wetlands - there are several lakes here. I gather that it has always been naturally a place for birds to gather, and once or twice a year some migratory birds can be seen as they fly from north to south and vice-versa to escape the cold winter. 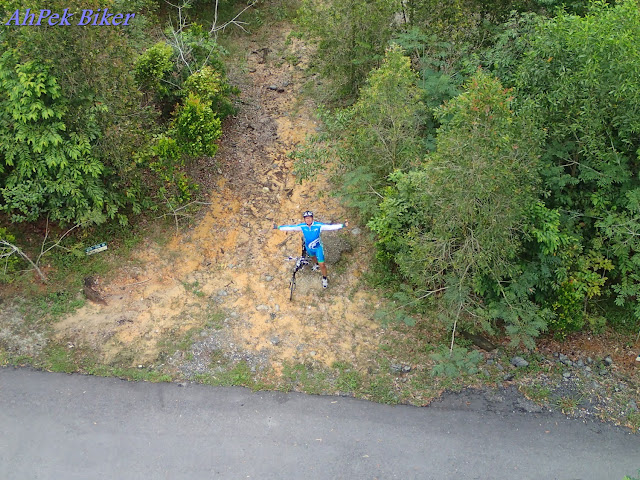 Looking down, I can see Chin, looking like a tiny pixie! 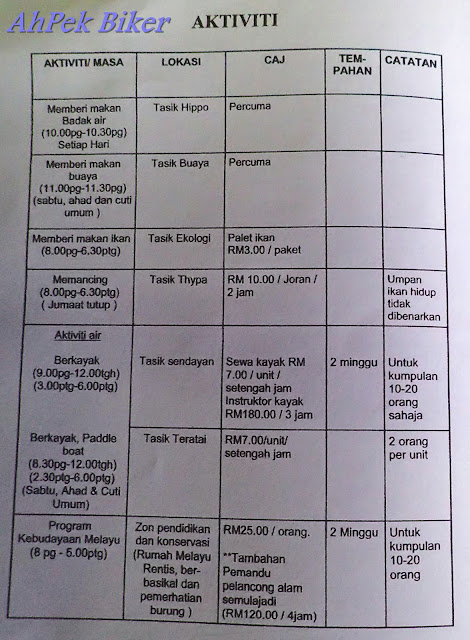 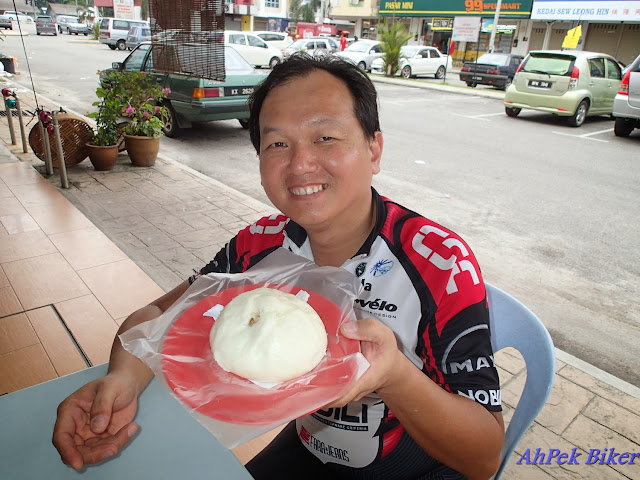 Our interesting visit to the wetlands over, we rode back the same way that we came but stopped at Dengkil for eats! This was some very good "Pao" (steamed buns) at Restoran Dengkil Kah Heong Pao. 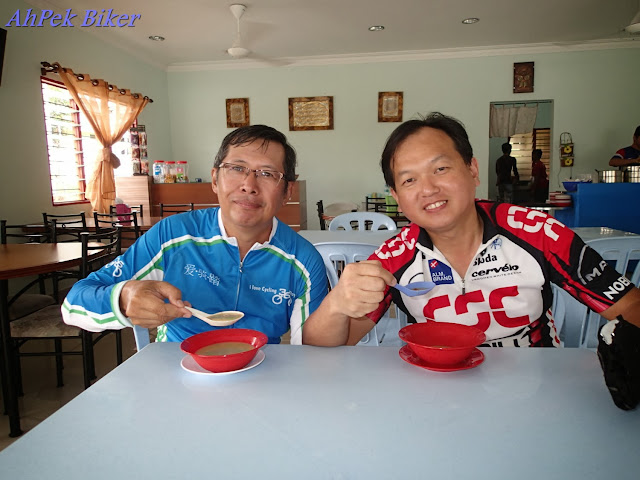 Still yearning for more eats, we rode further along and had this refreshing cendol at Cendol Durian Borhan. This is a branch of the Kuala Selangor cendol stall which I had during a bike-paking trip to Sekinchan (... see blog). 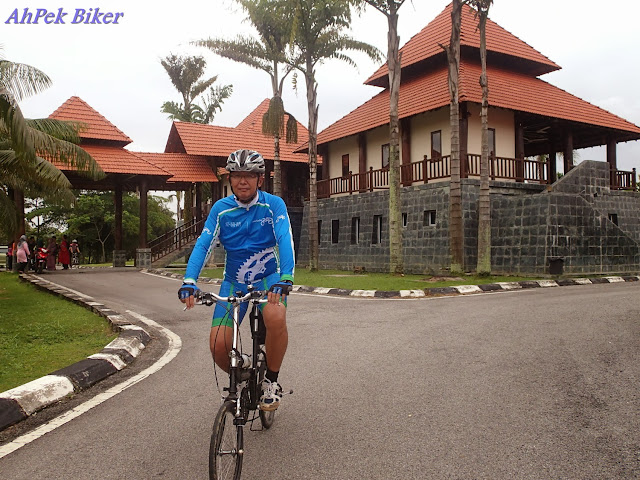 This was an eye-opener trip for me, a trip to a place that I have heard of but never knew could be so interesting. I am glad that Chin persuaded us to ride all the way to the Paya Indah Wetlands.
Thank you, Cikgu!

You are at - Jotaro's Blog / AhPek Biker / Cycling Malaysia / Putrajaya-Selangor / Paya Indah - The Wetlands Ride
(comments most welcomed below. if you like this pls share via facebook or twitter)
Posted by Jotaro Zen at 8:19 AM