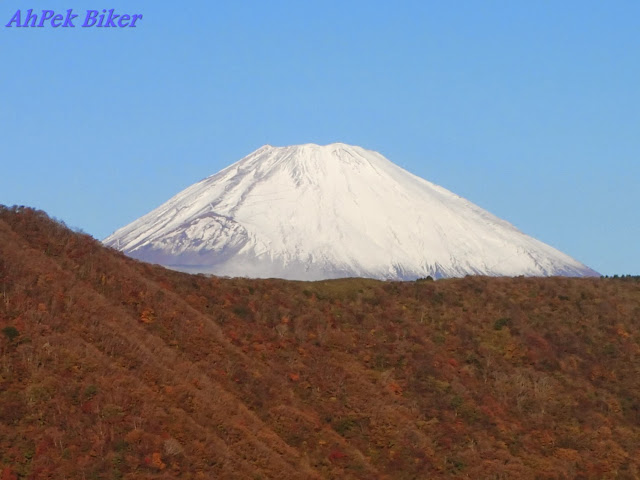 Our day started early as we were eager to explore Hakone. There were many interesting places to visit and we did not have much time to see all of them, so we opted for a cruise and then cable car rides up to the sulfur hot springs. 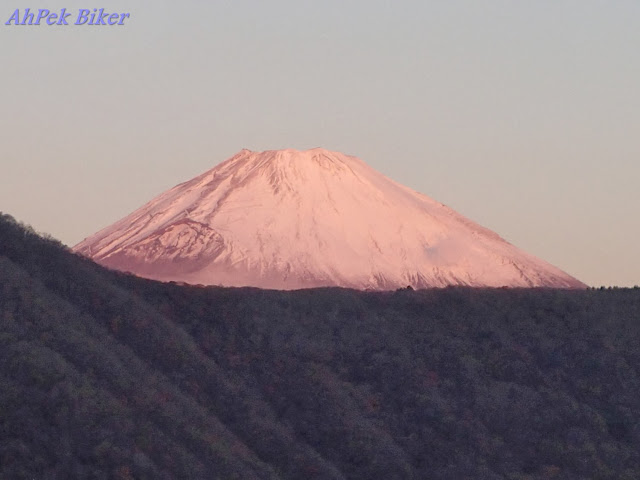 Hoping to catch the sunrise at Mount Fuji. I woke up at 5:30 in the morning, earlier than the rest of my buddies. From the balcony of the restaurant, I waited patiently and was rewarded as the dawn came. Mount Fuji glimmered with a pinkish sheen, surrealistic as it reflected dawn's early light.
It was freezing cold out in the balcony, I could only take about a couple of minutes out in the open; then went in to warm up before going out again. 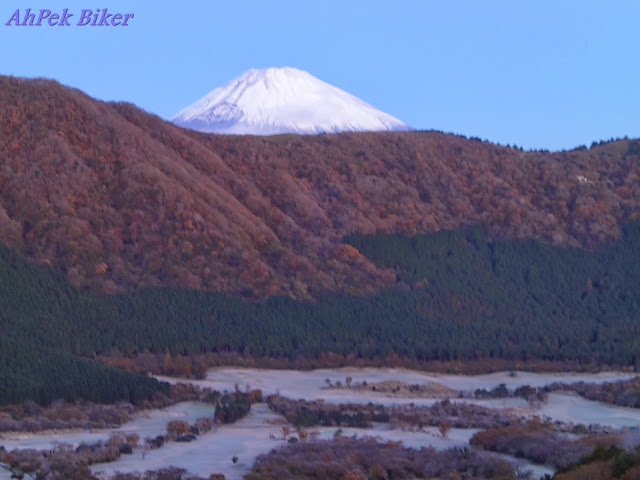 As it got brighter Mount Fuji shone gloriously white, and the valleys below became visible too. Looking down, I thought that I saw snow there. But, Hey! it's only early autumn - it's too early for snow. I then realized that these are the famed silver grass (Susuki -sogen) of Hakone! 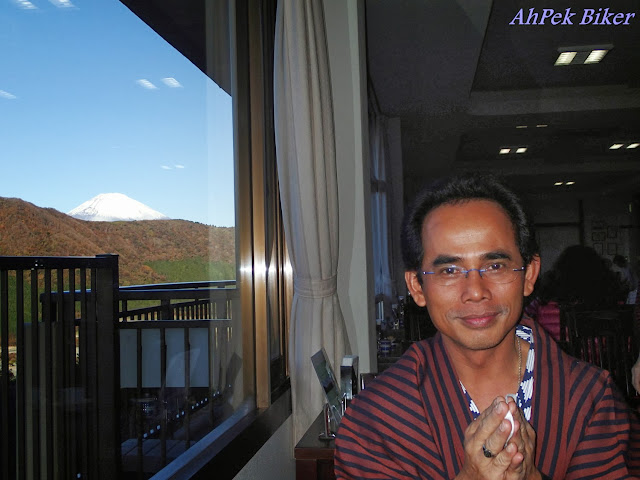 By the time I returned to the room, the rest of the guys were up, all excited by the view of Fujisan (as it is called in Japanese). Nash here is not praying but rubbing his hands to keep warm. 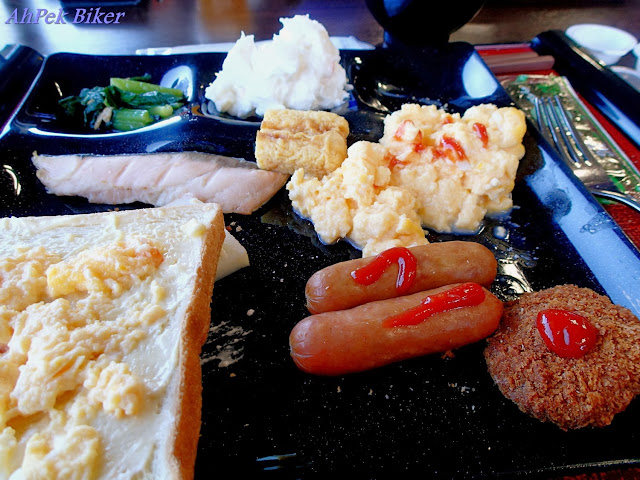 Breakfast was buffet style with a spread of Western and Japanese fare. Was it really appetizing or did the cold get to us for we at more than what we usually did. It mus have been a mixed of both.

Wanting to take the Lake Ashinoko cruise, we rode down to the short distance down to the Togendai pier. It was only a short ride, probably about 2 km. Frankly, that was about the only cycling we did - to and fro the pier. Even with multi-layers of clothing, it was just to cold to cycle; perhaps we from the tropics cannot take this chill that well,as we saw a few locals cycling around exercising.
At the pier, they did not let us park our bicycles, there was no bicycle park provided - we rode upwards to some car-park and parked at an unobtrusive corner. 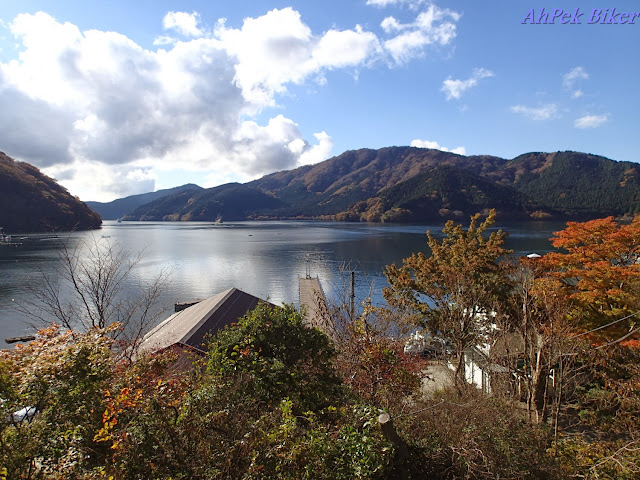 From here, there is a scenic view of a large part of Lake Ashi. Great! This will be a beautiful adventure. 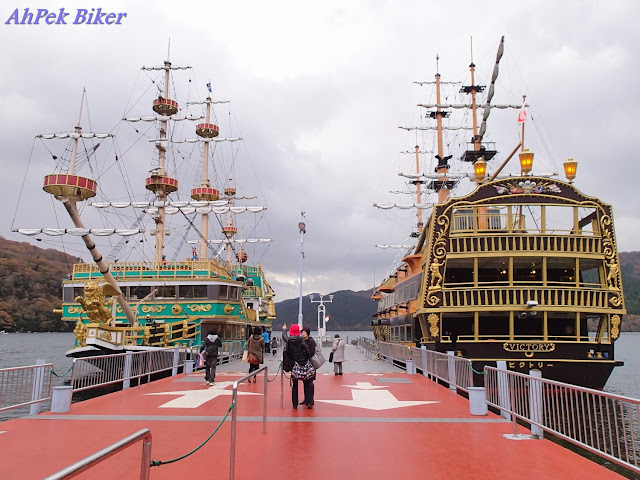 When we reached the docks were we in for a surprise. The cruise ships were full scale replicas of Western medieval warships. There are three of these ships plying the lake - seen here is the blue Vasa and the black-yellow Victory. The third ship is the red-white Royal II.
The Vasa is modeled after the 17th century Swedish warship, the HMS Victory after the 18th century British warship. While the Royal II modeled after the Royal Louis, the 18th century flagship of the French Navy.

We will be taking the Royal II from Togendai to Hakonemachi-ko on the other side of the lake. For those interested in bringing their bikes onto the ship, the cost is 400Y per bicycle each way. 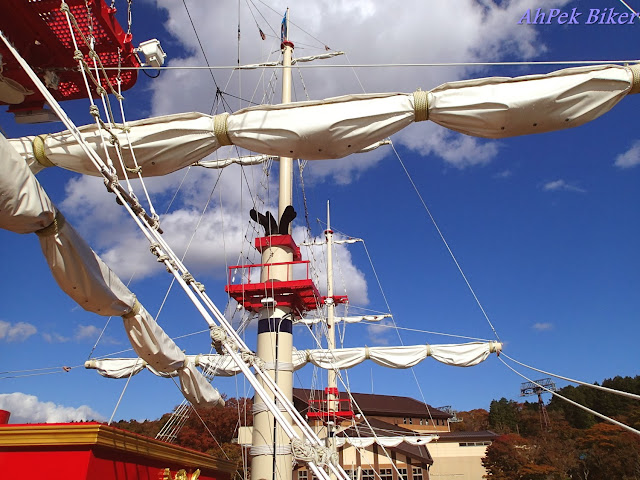 Externally, the ships have been crafted down to the smallest details, internally they have been furnished with comfortable seats, proper stairs, etc. to cater to the comfort of the tourists. So no bunks, hold or brigs (for the naughty tourist) here, and  no rancid smell of gun-powder too. The sails remain unfurled throughout the journey, after all they are not needed as the ships are powered by diesel engines. 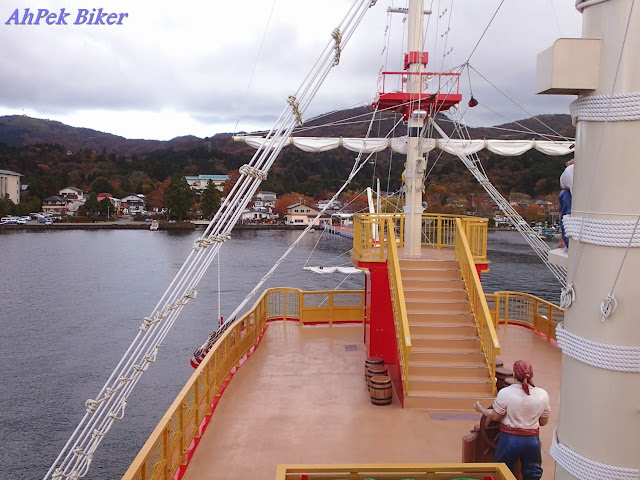 No matter that this is a replica, we were cyclist no more. Standing on the bridge we were sailors of old giving instructions to the pilot, "Avante! Forward....." and we set sail.

Along the way we passed by: 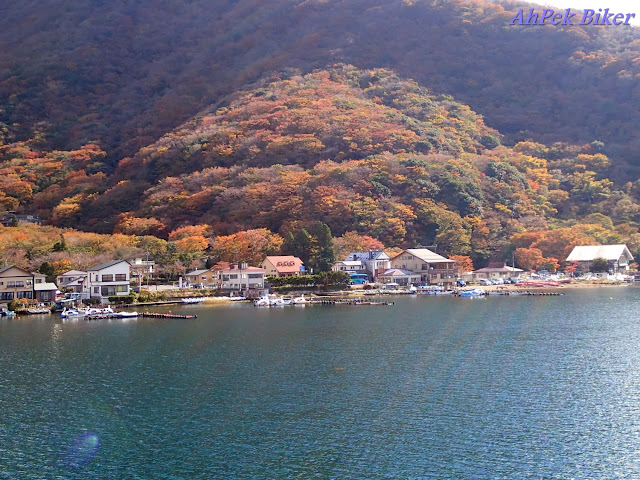 Local houses and clubs with their own private piers. 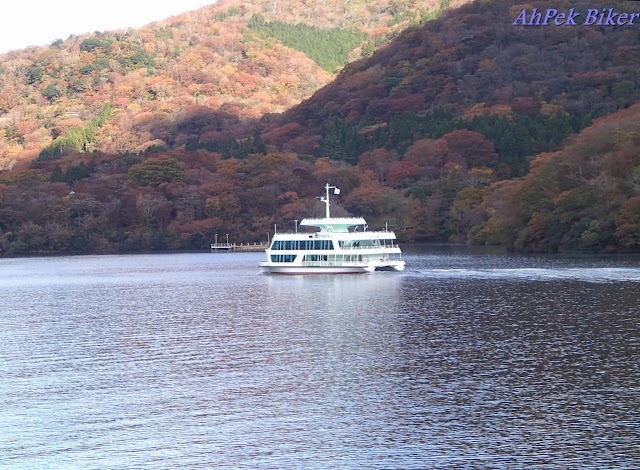 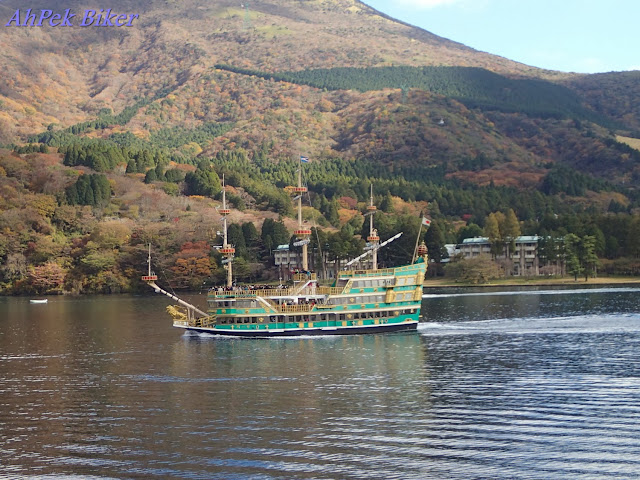 Ahoy! The Vasa, a friendly ship, the canon hatches not opened. The ships follow international sailing rules; passing each other on the port (left) side - I am getting to be an old salt, aren't I? 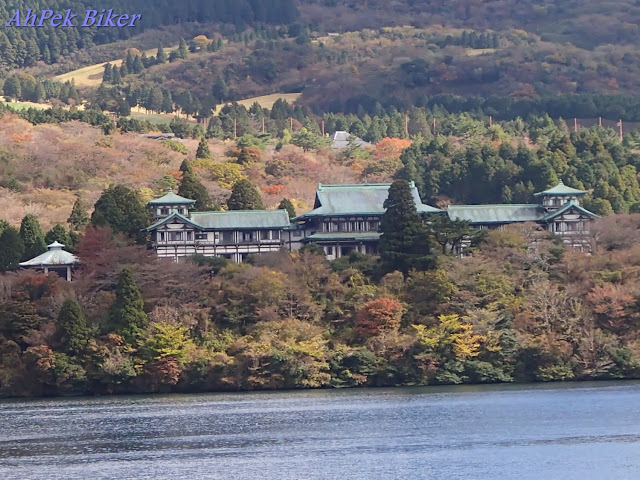 A hillside temple, to go pray after naval battles at the lake? 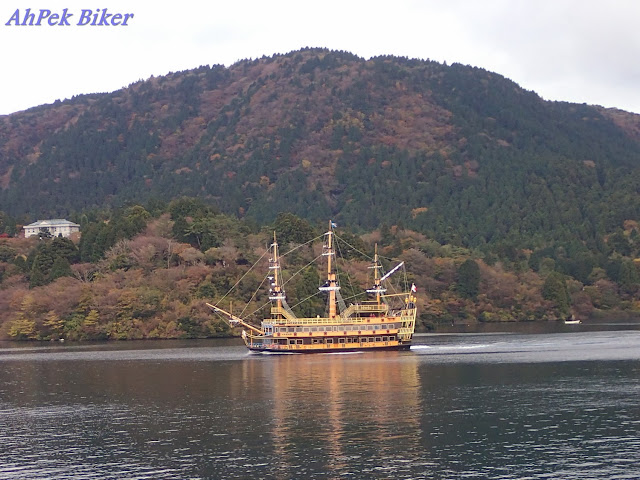 Ahoy! The HMS Victory, it's cannons showing on the broadside. Fortunately the British and the French are allies. Salute! 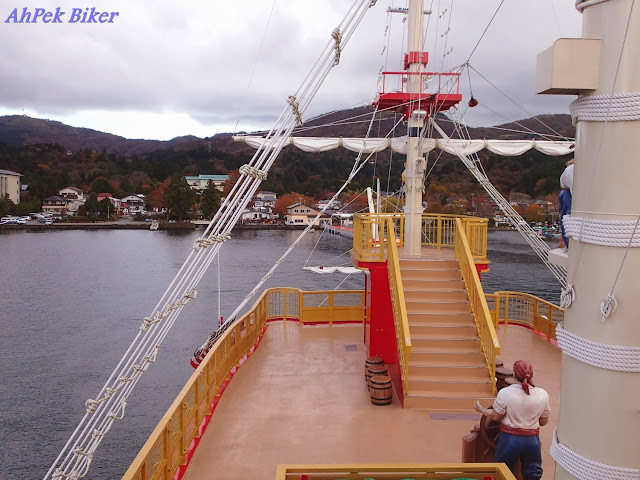 Land Ahoy! We are making landfall at Hakonemachi-ko, a small hamlet on the other side of the lake. 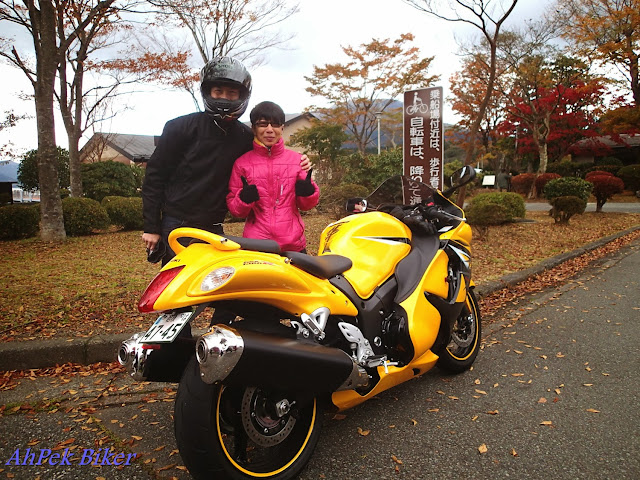 Among the autumn trees, we met this fellow with his super-bike. Kim was quite taken by the handsome motorcyclist, while the rest of us by his macho bike. Shall we upgrade to this? Tempting..... 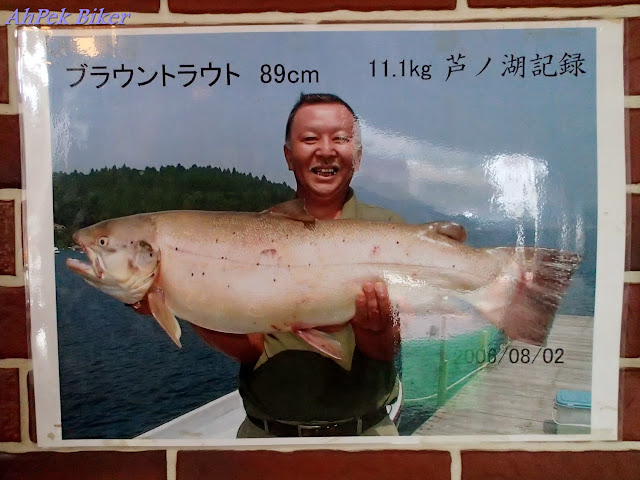 Feeling cold,we dropped into this cafe for some warm coffee. This must be a place where the Lake Ashi fishing enthusiasts hang out, for on the wall were preserved catches including this photo of a man with his record catch. Wow! What a whopper! 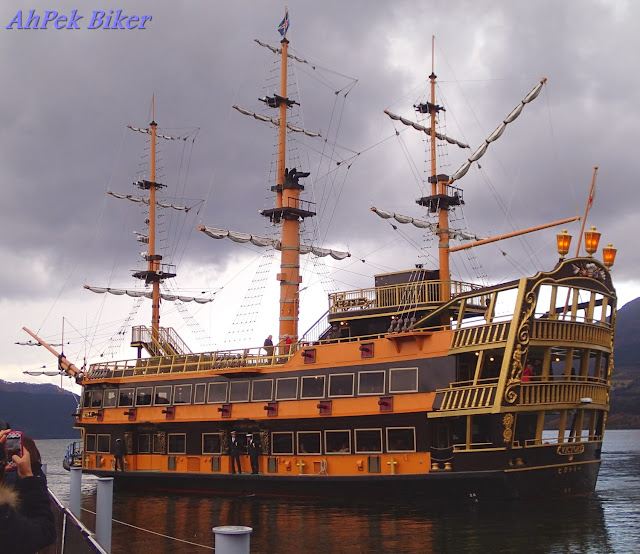 It's time to take the return trip back to Togendai, this time round we are taking the HMS Victory. This is the newest fleet of the Lake Ashinoko fleet, fitted with stronger engines and also a lift. 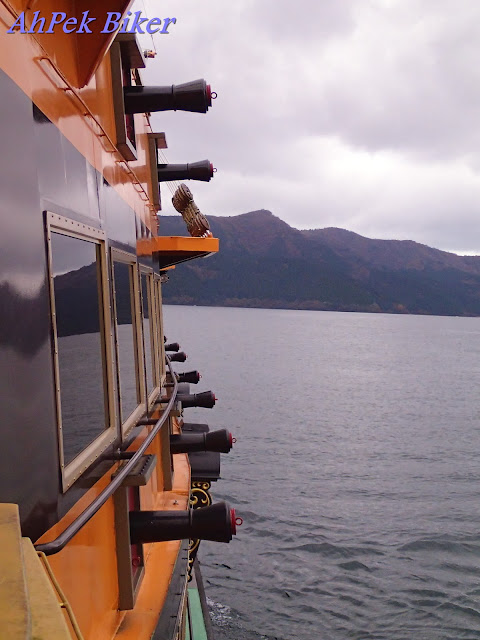 Very realistically, the replica has the full complement of cannons. These are only the front ends and are stoppered.
It began to rain or so we thought. Actually it was sleet, it WAS that cold. A first for this tropical country bumpkin too. 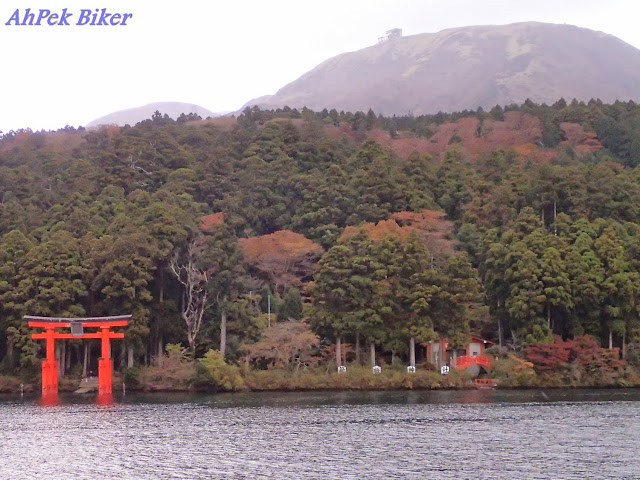 Setting sail, we passed by this orange torii gate rising from the waters of the lake. I love these toriis, they seem to complement the scenery and make the place look more Japanese. 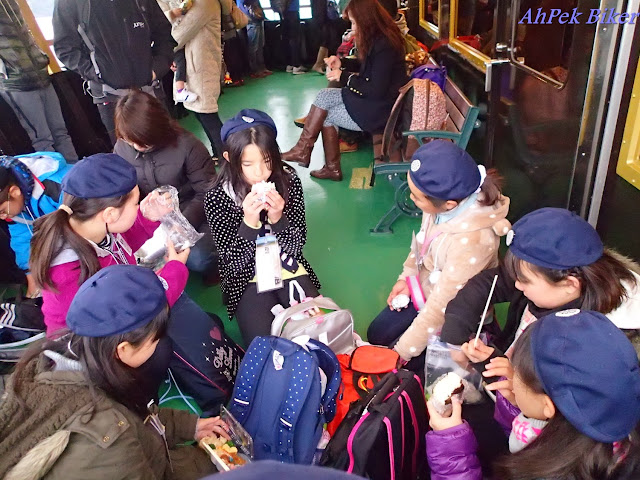 On board, girls from a school trip knelt in a corner and quietly ate their pre-packed lunch. They are so disciplined, talking in hush tones and silently put their things away afterwards without dirtying the place. 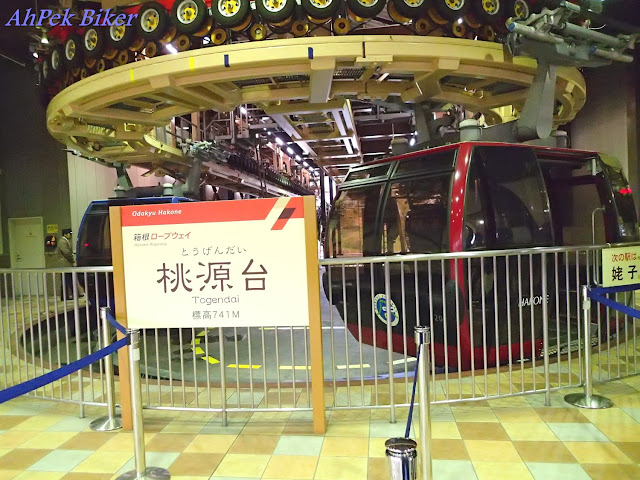 From the first level of the Togendai terminal we took the Hakone Ropeway, it's a suspended cable-car system that will take us to the top, a sign shows that it is another 741 metres up. 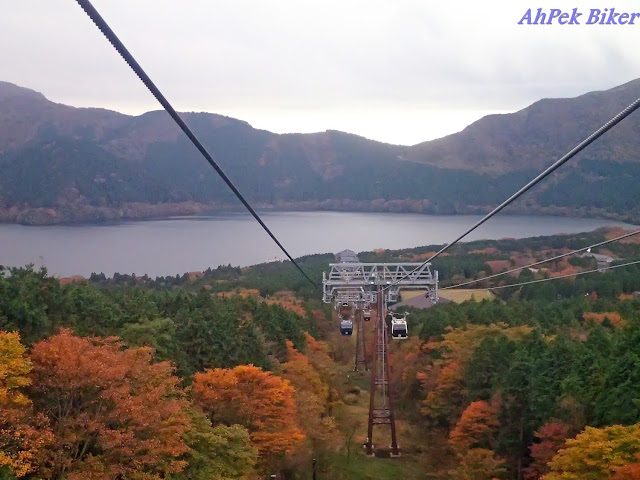 As we ascended, the autumn trees formed a scenic corridor and Lake Ashinoko came into view. 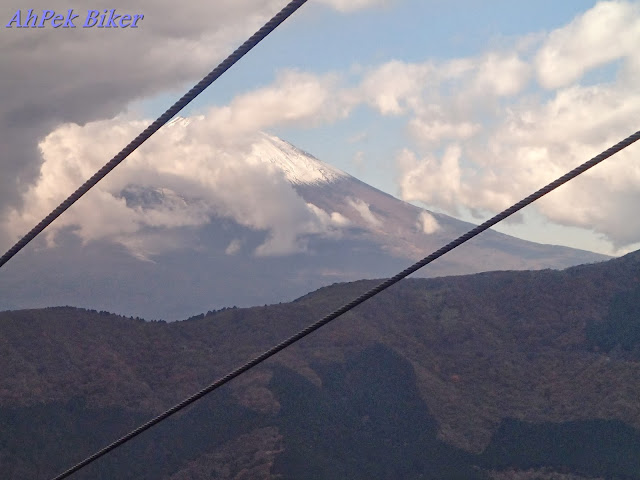 We bypassed the Ubako Station that is about halfway up. It is more of a turning point for the cable car, unless one has something to see or do there, there is no need to get down, the cable-car will continue onwards to Owakudani at the top.
Higher up we were full on anticipation - the Ropeway gives one of the best views of Mount Fuji. Unfortunately the sky today was full of clouds and we did not get to see a splendid view of the mountain. 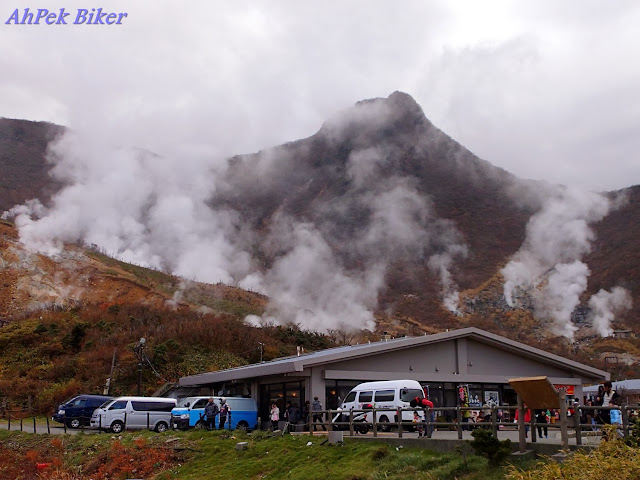 Up at Owakudani, the sulfur mines and hot springs discharged fumes making us feel like we are in another world; no wonder Owakudani is also called Jigokudani ("the Valley of Hell") by the locals. This area was formed when Mount Hakone erupted about 3,000 years ago and the water from these springs are tapped to the ryokans (like the one we were staying in) further down hill. 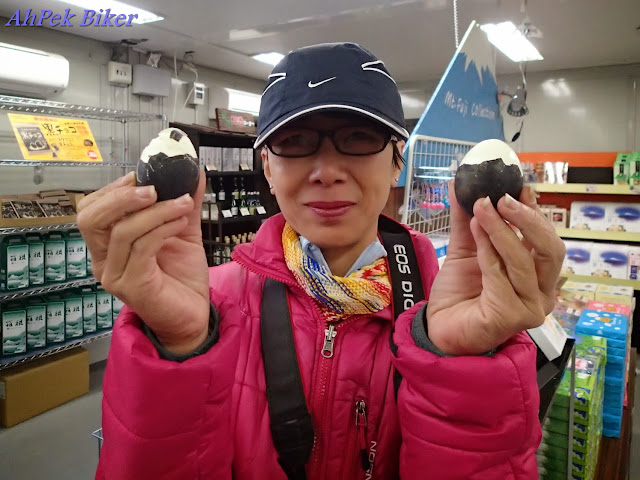 We popped into the large convenient store, here they were selling the famous black eggs of Owakudani. Apparently eating one of this eggs will lengthen a persons life by seven years. These eggs are sold by bags of five minimum. Wow! That will be 35 years to a persons life, better come here more often then. Jokes aside, the eggs are cooked in those sulphur hot springs and somehow they turn black. Taste wise, they tasted no different from those we get from our local coffee shops; they was no extra flavour or no sulfuric smell. Just eat them for the years then. 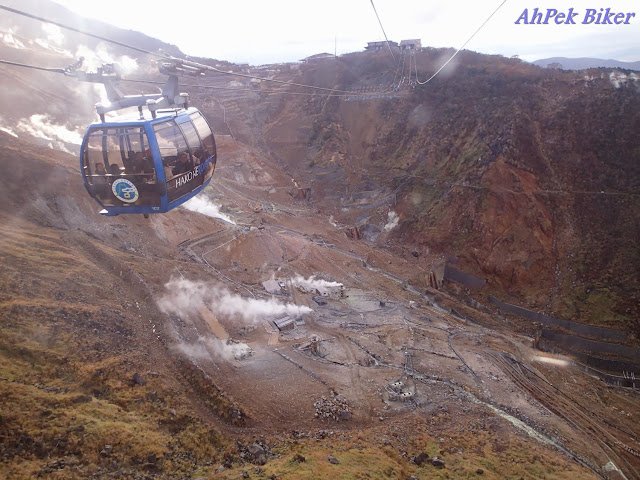 Out of curiosity we took the cable car down to Sounzan, nothing to view on the way down except for more sulphur mines. From afar Sounzan did not look that appealing, just a few houses, etc., so when we reached the bottom we took the next cable car up to the top and from there down back to Togendai. 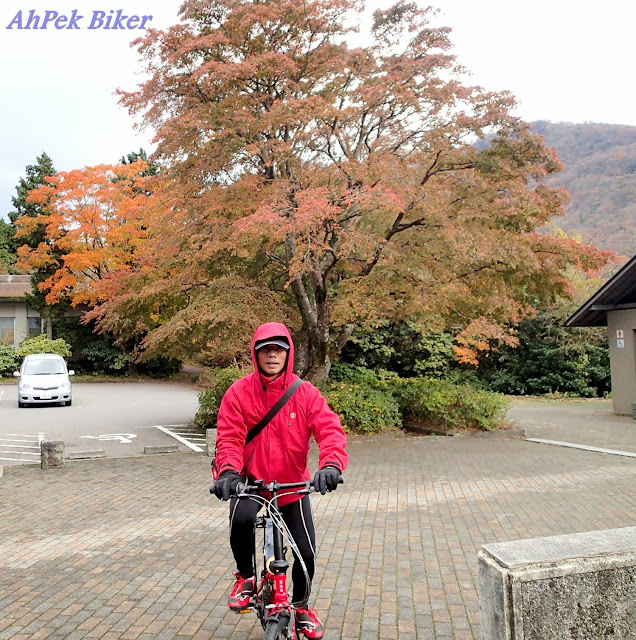 We had planned to do a bit more cycling at the cycling lanes running from Togendai and part way round the lake - the cold weather was really a deterrent, so our cycling was limited to cycling back to Fujimien Lodge to meet with the rest of the gang. We packed our bags and left Hakone from the nearest bus-stop.


The route back was almost the same as the route coming up the previous day, save for one difference - the bus took us direct to Odawara, saving us one train trip from Hakone-yumoto. 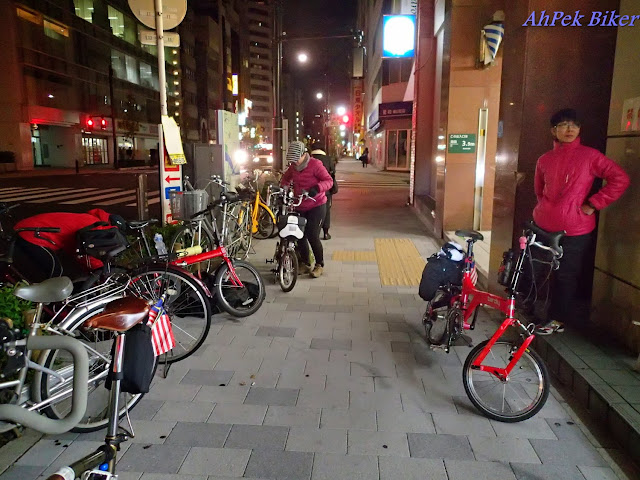 Changing trains at Shinjuku, we alighted at the Bakuroyokoyama Station, took the lift up to exit at Kiyosu-bashi Dori. It was already 9:10pm, so we quickly un-bagged our bikes and cycled back to K's House - we have to reach there before 10:00pm to re-check in and also to collect our left luggage.
After that time the staff would have left and we would probably have to sleep at a a temple or somewhere. Fortunately we managed it with fifteen minutes to spare, and we did not have to sleep on a cold pavement hugging our bikes 😂.

It had been a nice trip to Hakone, cold but wonderful.