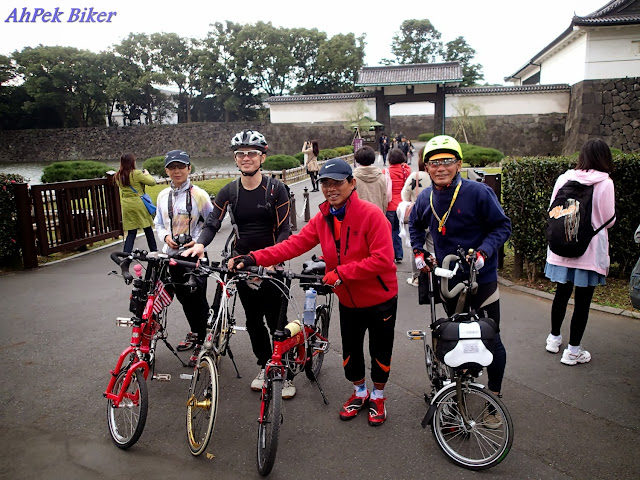 Today was a free and easy day for us; no firm plans or destinations to visit. Andrew, Hui Min and Siew Yung had their own plans. So the rest of us were figuring out where we should go; on the notice board of K's House was information on the perimeter roads around Tokyo's Imperial Palace being closed to traffic and opened to cyclists from 10:00 am to 3:00 pm. This was a go for us, and a lovely surprised awaited me there. 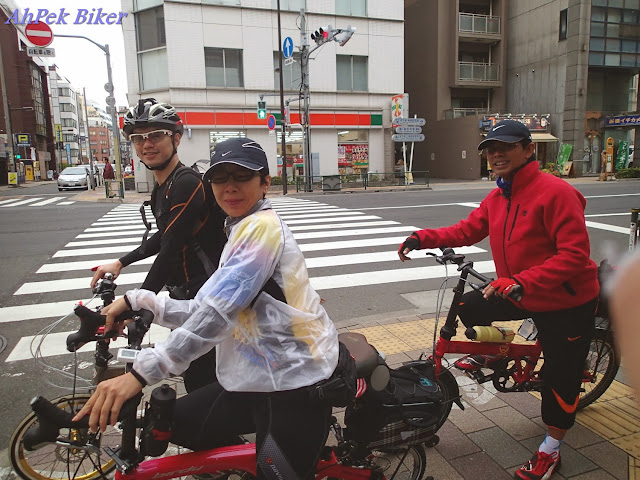 As we did not have the use of a GPS unit, the previous night, we studied the Tokyo road maps provided by K's House and plotted our route to the Imperial Palace. We appointed WinSin as the pro-tem ride leader for the day; he being able to read Chinese, and Japanese Kanji was fairly close to Mandarin characters.
The route seems simple enough: ride along Kasugi Dori until we hit Chou Dori and turn left and head for Nihonbashi. At the Nihombashi Station turn right and ride pass the Tokyo Station and right ahead should be the Imperial Palace. Sound easy doesn't it, just three turns; but things don't look as simple on the ground as they do on the maps.
On this morning we bravely headed out and hoped for the best. 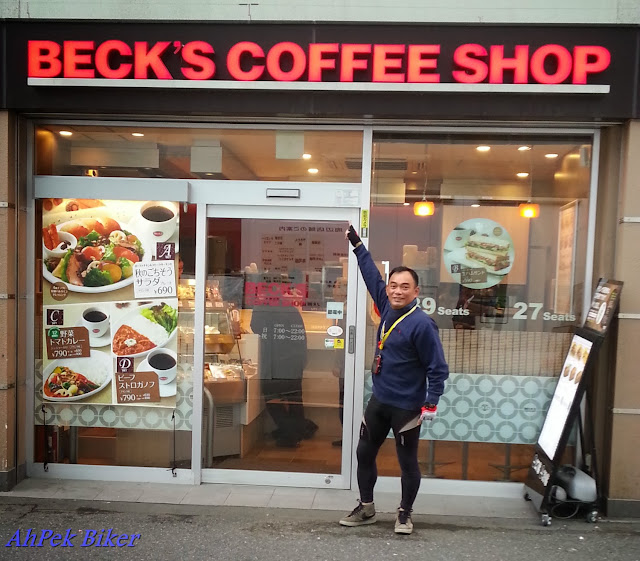 But first breakfast at nearby Okachimachi. Wanting a change from Japanese food, we stopped at Becks Coffee Shop for breakfast. 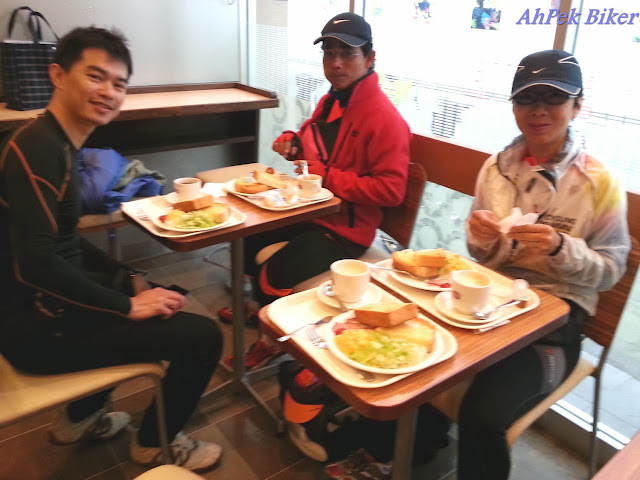 It was a welcomed change after a few days of ramen, the three of us had bacon and eggs breakfast. Nash had fish sandwich with eggs. Together with these, we had really good coffee.

Continuing our foray, we stopped frequently to double check our location, and we also looked out for recognisable landmarks that will help in our return journey: 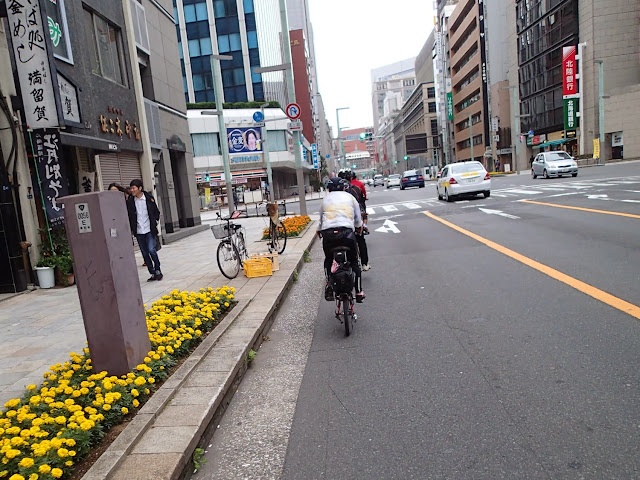 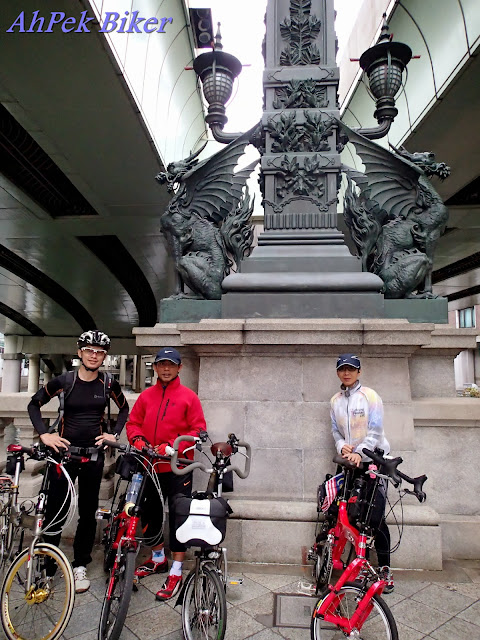 ... and this bridge near the Akihabara Station with dragons that looked more western than oriental. Yes, these dragons will be easily recalled.
Just round the corner from this is the Manseibashi Police Station where Nash went to ask for directions. Unable to speak much Japanese, while the policemen were not well versed in English, it was like a chicken trying to talk to ducks.
The policemen went "Hai! Hai!" many times while nodding their heads, and we did hoped that they were saying, "Yes, you all got the right directions." 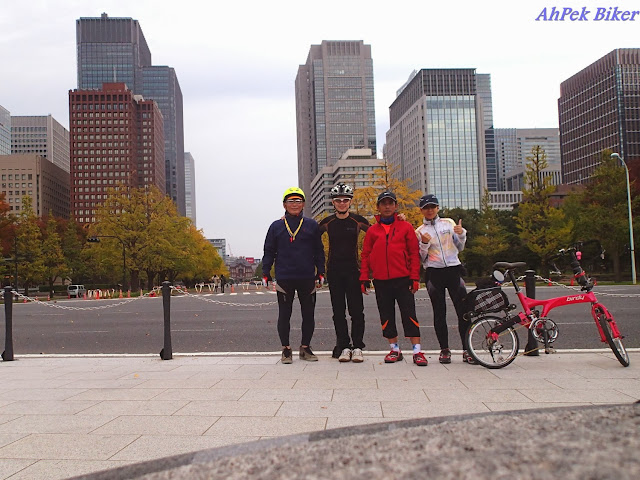 Aptly directed, we soon reached the Imperial Palace. The boulevard leading to the palace was very wide and lined with beautiful yellow-leaved trees. 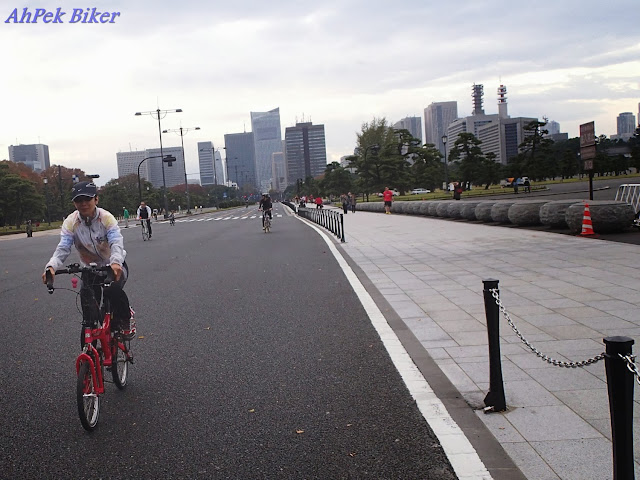 It was freedom for cyclists on this day; the wide roads around the Imperial Palace have been closed to all other traffic except cyclists and pedestrians. The roads are closed every Sunday from 10:00 am to 3:00pm. Those who do not have bicycles can even rent one for free (... see Lonely Planet news). 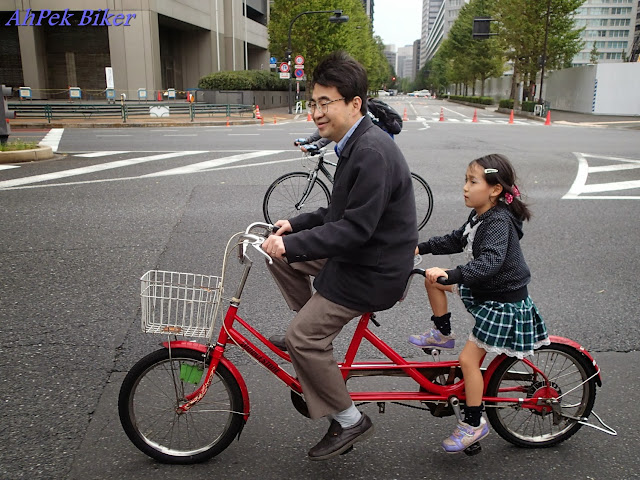 Many resident foreigners, tourists, serious bikers (like us?) and locals (like this father and daughter riding a tandem) take advantage of this to enjoy a leisurely or even a fast paced ride. Other cities should follow this example as it encourages exercising, allows interaction between people (locals and foreigners) and reduces pollution around the target area. 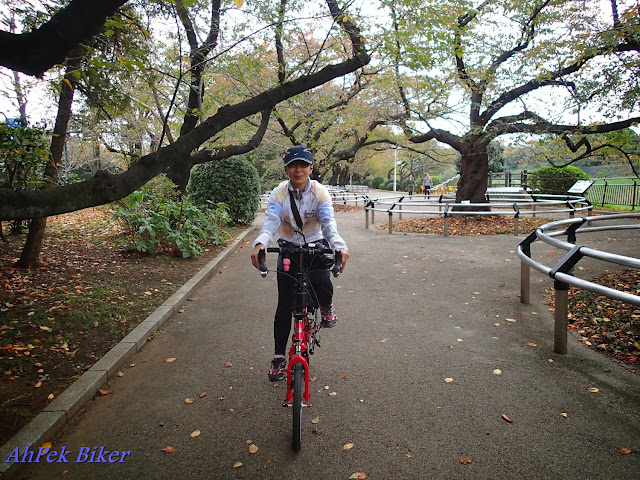 One can either cycle on the main road or along the walk paths. Being here to enjoy the scenery of the place, we skipped the adrenaline pumping fast road ride and opted for the casual ride along the shady paths - some of these lead to small parks dotting the route. 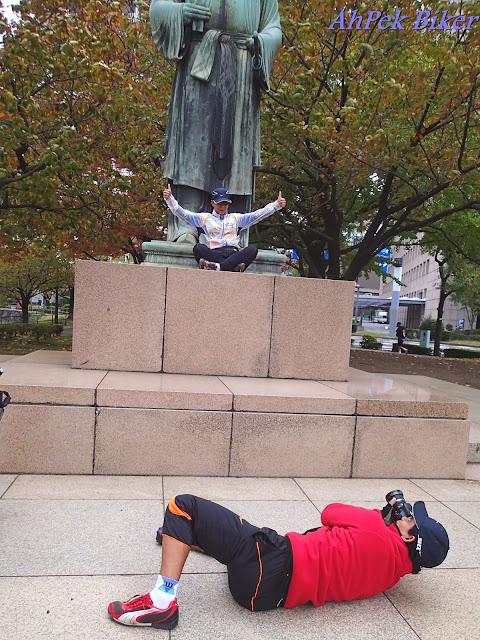 At one of these little parks, Nash went to great lengths to capture Kim in a photo with a Japanese medieval statue. 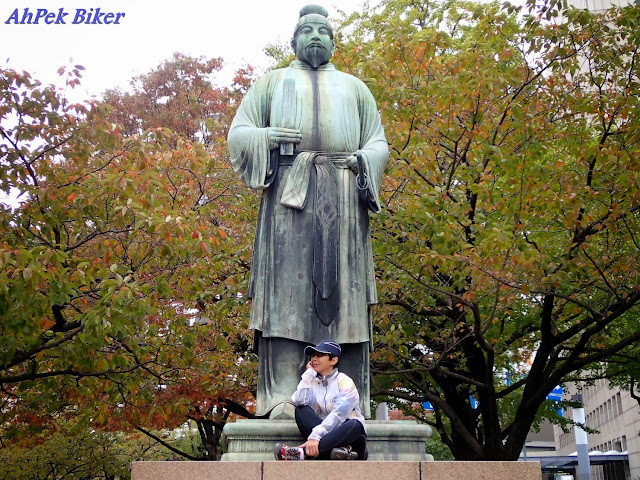 Some of the nice scenery along the Imperial Palace route: 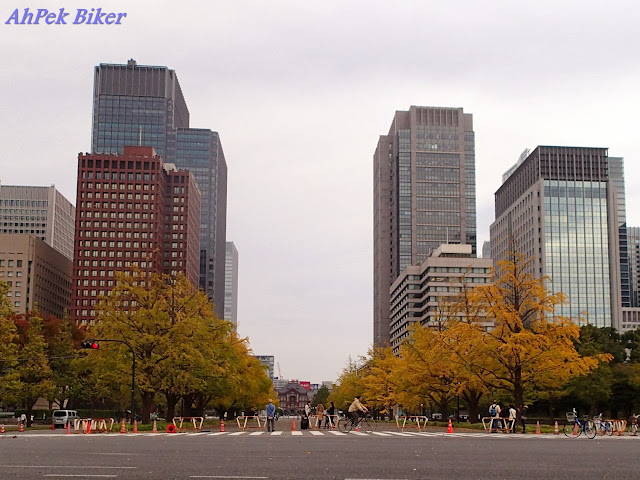 The tree lined boulevard leading from the Tokyo Station to the Imperial Palace. 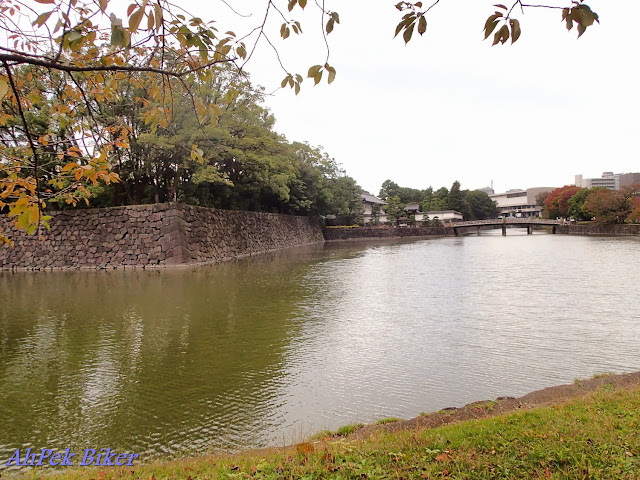 The canal moat surrounding the palace. 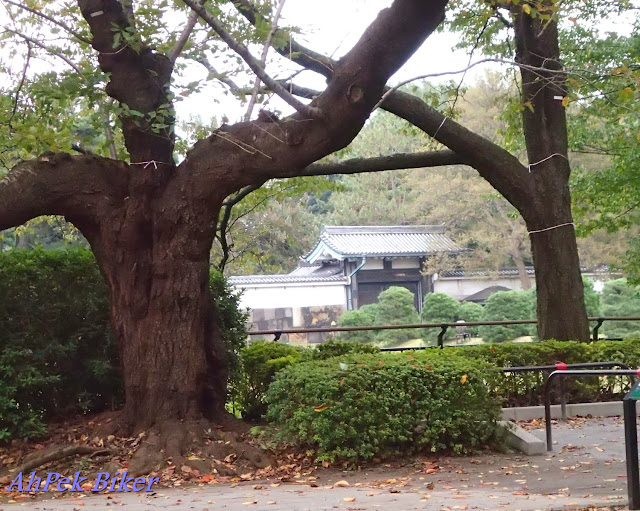 A peep at one of the palace gates. 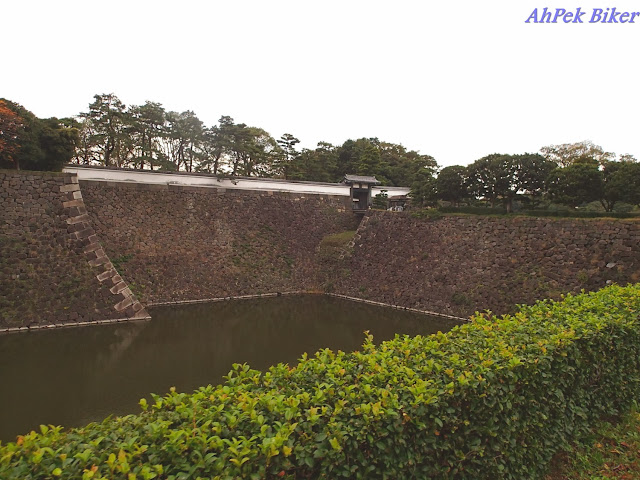 Rampart walls of the palace. 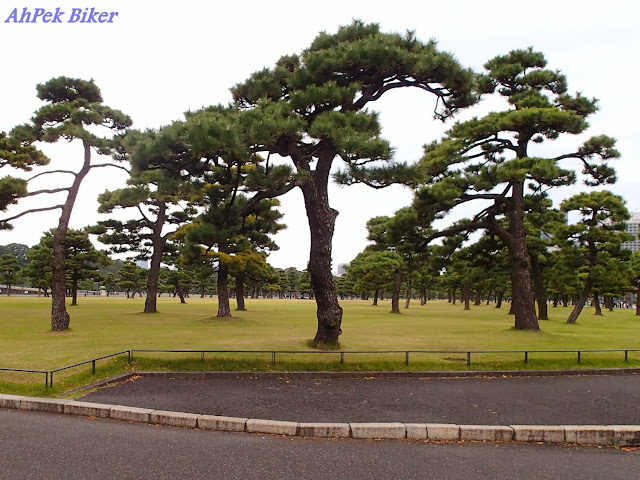 And few of the people we met: 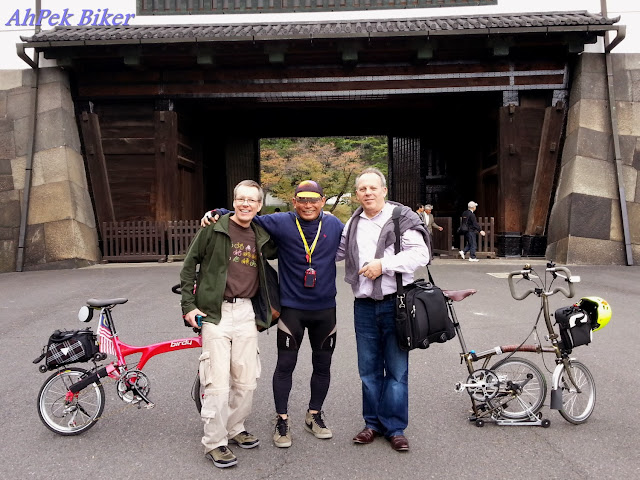 Stopping for a short walk around tour of parts of the palace, we met a couple of Englishmen, Derrick & Andrew, on business-cum-holiday in Tokyo.  They, were quite drawn to our cycling here especially Derrick who rides a Brompton himself back home. 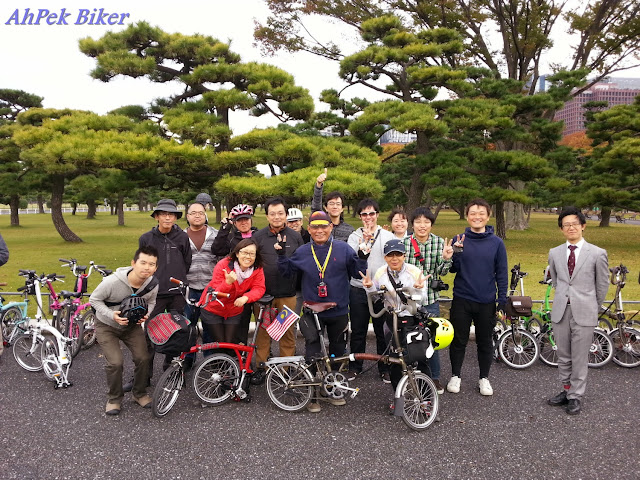 The Brompton In Palace group. They ride here once a month. 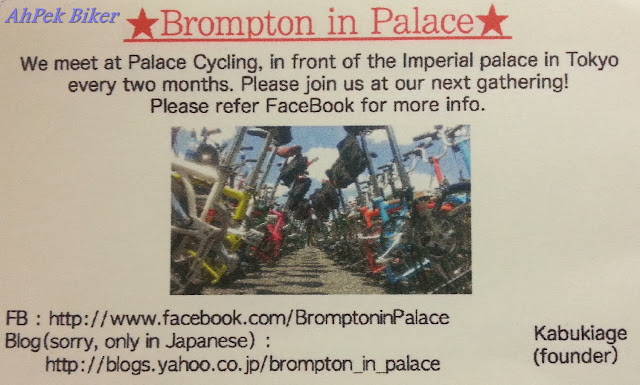 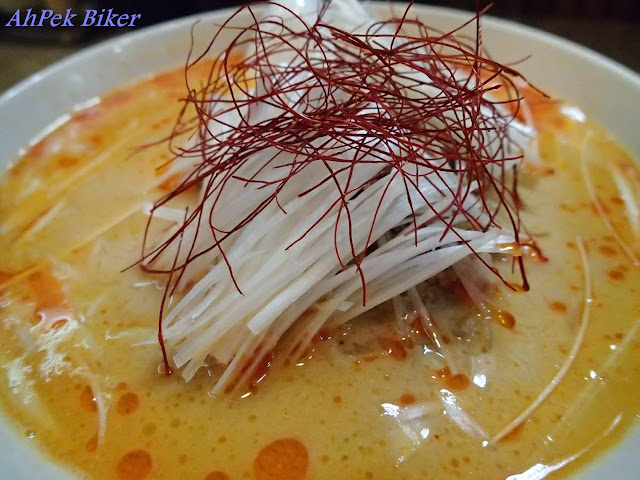 Leaving the palace, we stopped by at a foodie shop for a late lunch (one in a row below the railway tracks leading away from the Tokyo Station) and had this curry ramen with suspicious looking red hairy things on top. 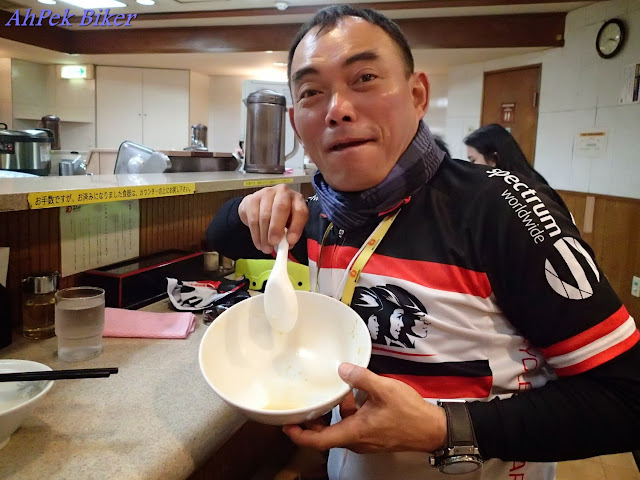 With a bit of trepidation, I slowly tested the ramen; finding out that it tasted good, I wolfed the whole thing down - noodles, hairy stuff and soup until it was completely dry (yeah... I do that often with good eats!). A friend later pointed out to me that those red hairy things were strips of deep fried chilli. Thank goodness. 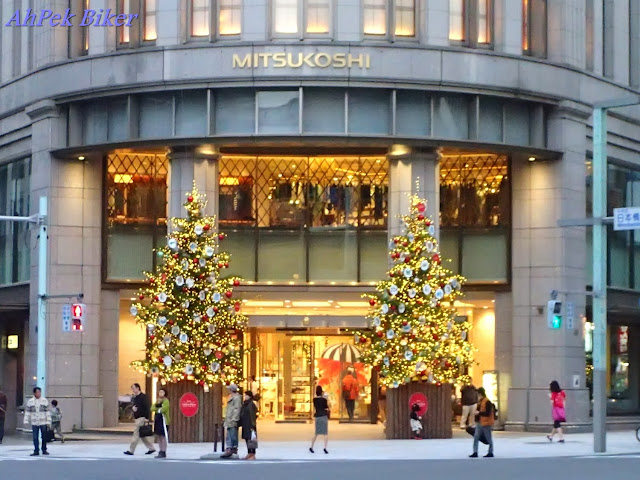 Our journey towards our next destination, Ameyoko, the recognisable landmarks served us well and our journey went withouth a hitch. En route I saw that Christmas trees and lights were already being put up, seem like Christmas comes early to Japan. 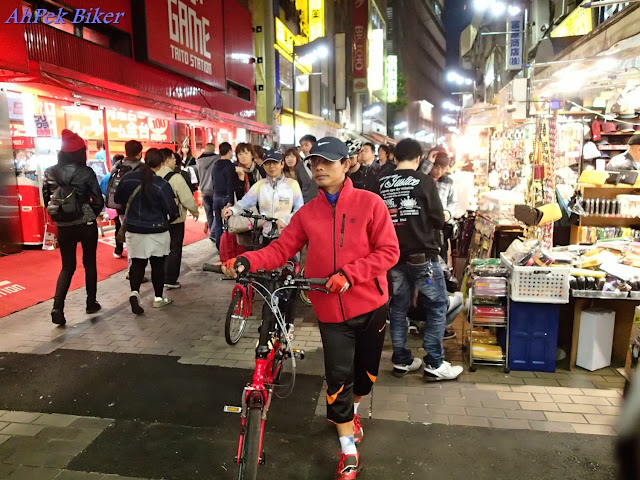 During the evening (actually it was only approaching 5pm), the Ameyoko Market Street was full of people and we had to push our bicycles through the area. 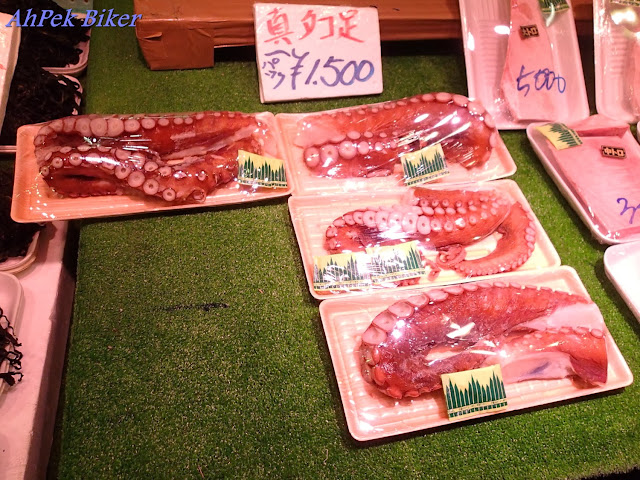 At one end of the street is the wet market section selling very Japanese foodstuff like these octopus tentacles. 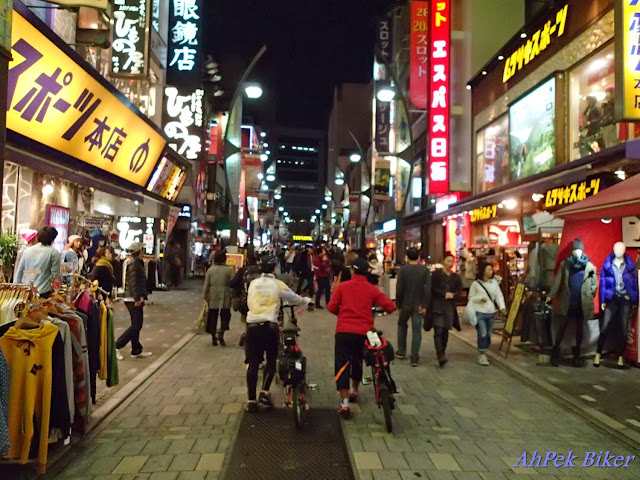 On the other end are shops selling apparels, shoes, hand-bags, etc. 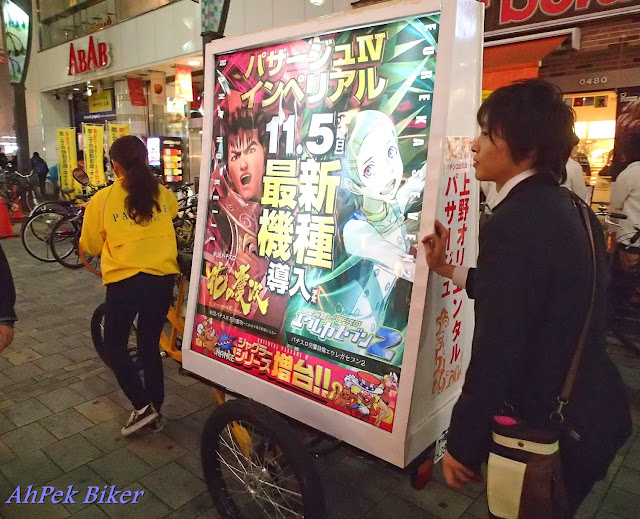 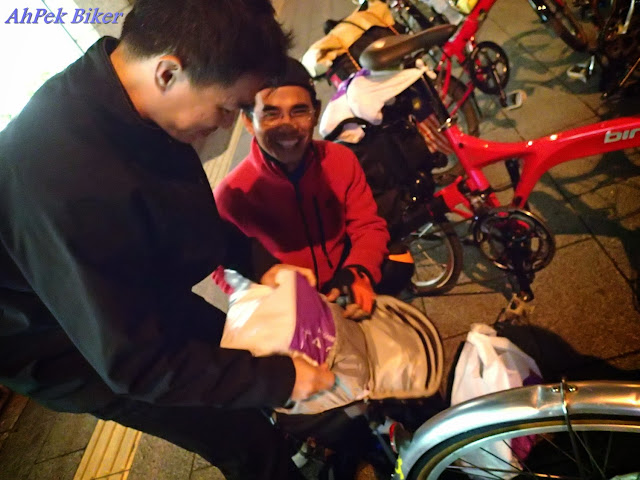 On the way back we stopped at this cookies shop (at the junction of Kasuga Dori & Showa Dori) where Winson went in to the a great deal of shopping for Japanese cookies, tit-bits, etc to take back home. He was in there for an hour and came out with two big bags.
It's going to be a good Christmas for his friends and relatives: Ho! Ho! Ho! Here comes Santa Winsin with two big bags of goodies. 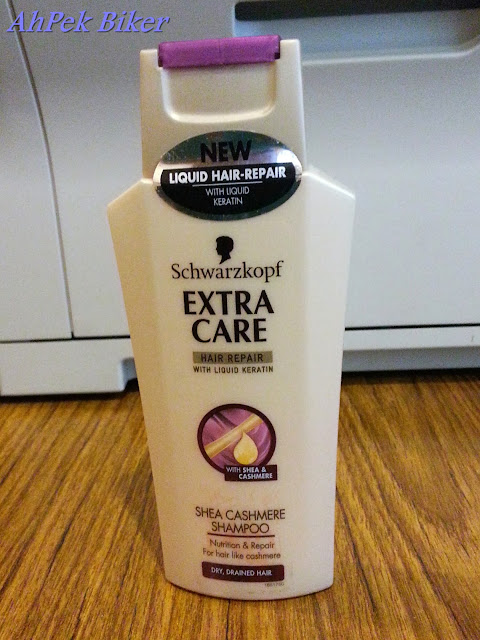 See this bottle. Guess what it is.
Yes. You got it right, it's hair shampoo.
But poor old me just saw the words "EXTRA CARE". My eyes did not connect to my brain well enough and thought it was body lotion. I got a friend to apply it to my dry back, rubbing it on the friend noticed it becoming foamy, had a look at the bottle and exclaimed, "Hey! This is shampoo lah, not body lotion!"
AND to think that I had applied this on myself the previous evening; no wonder I was feeling itchy through out the night.