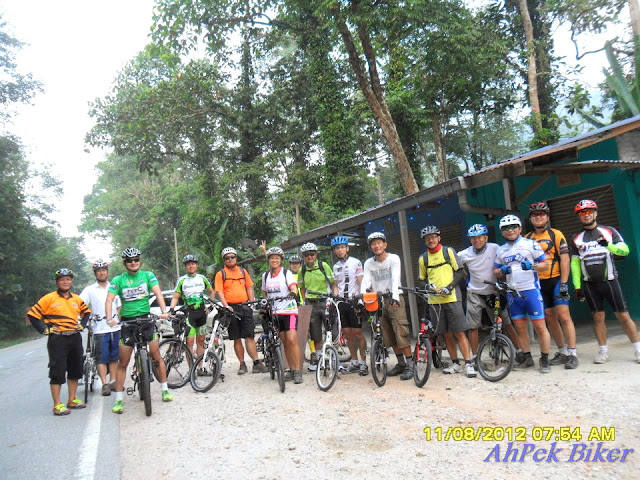 Prelude
I was excited. About five days prior, Rivern, the group leader of My Cyclist Friends had put out a riding event on the group posting. I had ridden with them once before (see Kuala Lumpur : Setiawangsa Ride) and found riding with them enjoyable as they were a friendly and caring group. The ride planned was a route starting from near the Orang Asli Hospital to Genting Sempah and back, roughly about 30km in total. But I was a bit apprehensive on joining this ride.


The reason behind my trepidation is that the ride will be in the hills, riding up slopes - climbing a total of 600m in elevation. So far, I have ridden some steep slopes, that is at the weekly Damansara Heights ride organised by Folding Bike Malaysia. But that was at sub-urban roads, lasted just about an hour and the steep stretches were short. This one will be a continuous climb of over 15km on the way up. Will it be too much for me, and old man who have taken up biking for just over a month? 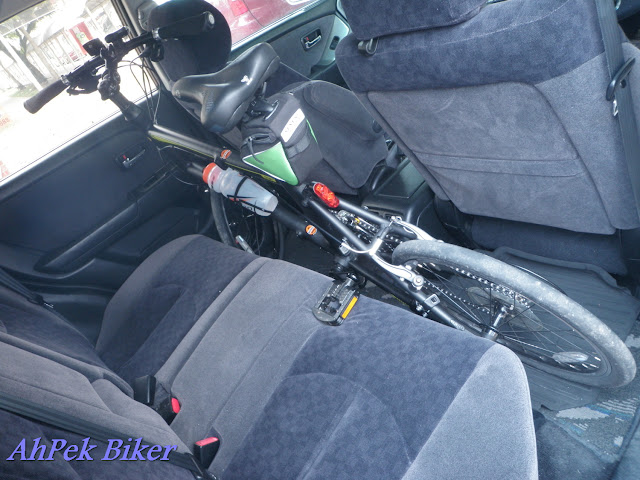 Because of this, I didn't register straight away for this ride. But over a few days, I built up my courage. They were other riders who are older than me - if they can make, I should be able to make it. And my close friend Sin of hApPy HaPpY, somebody my age will be there too. So will Rivern and Kook Keong. There will be camaraderie for encouragement. So I signed in & loaded my bike & gear into my car the night before.

The Ride
The ride is on an early Saturday morning, so I decided to take a drive along the LDP (Leburaya Damansara-Puchong and the Middle Ring Road Two (MR2) to the meeting point. These highways are normally quite jammed up with traffic, but at this earlier hour, traffic is lighter. 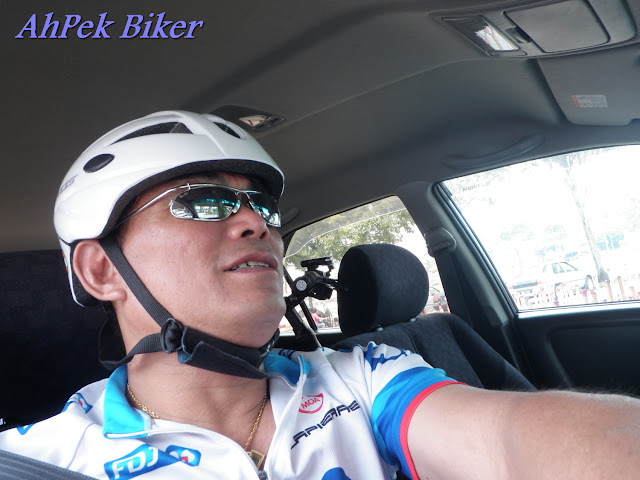 The morning of the ride I woke up with eagerness, my fears of a few days ago were gone, and I was now looking forward to the ride, to meeting new friends and to pushing myself to the next level. Worried of being late, I don my helmet and gloves while driving over to the meeting point. I must have looked odd to other drivers. 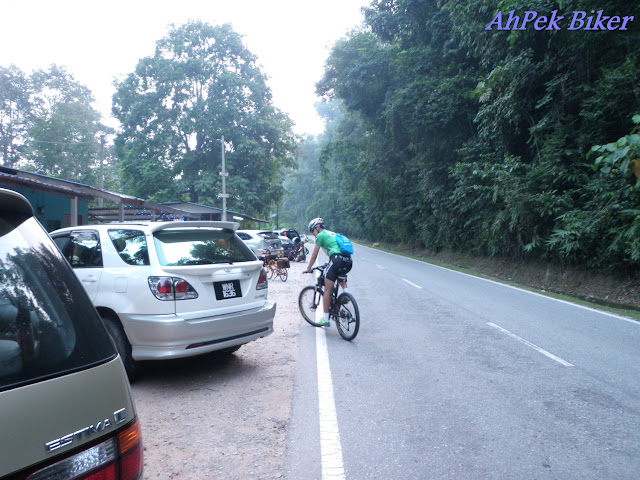 The meeting point was about 100m from the Gombak Orang Asli center. Sin had earlier given me the GPS coordinates. And I arrived slightly early, thanks to Sin's coordinates, which was very accurate. The many park cars at the road shoulder with unloaded bikes helped too. In the morning light mist, bikes were unloaded and unfolded. The temperature was a cool 23 degrees, very conducive for riding. 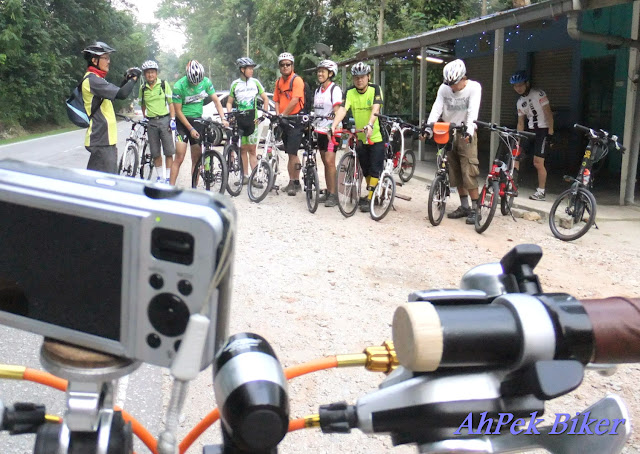 We lined up for a memorable photo before setting out. All in there were fourteen of us. Half of whom I have never met before. New ride, new friends - that's what I like about biking. Some of them, I was already friends with on Facebook but am only seeing physically for the first time. Nothing like a face to face meeting. 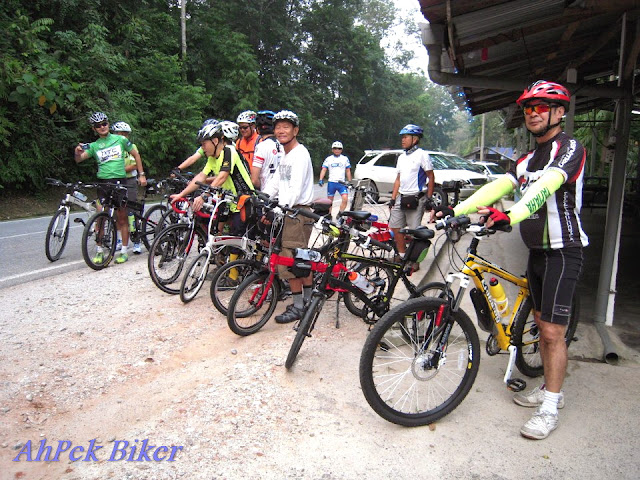 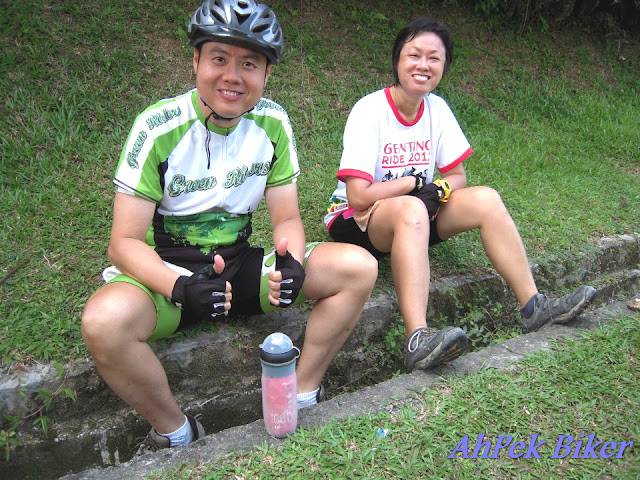 We were joined by husband-wife team, Yong Sin Ng and Lim Hui Min. Cycling is great for couples bonding. 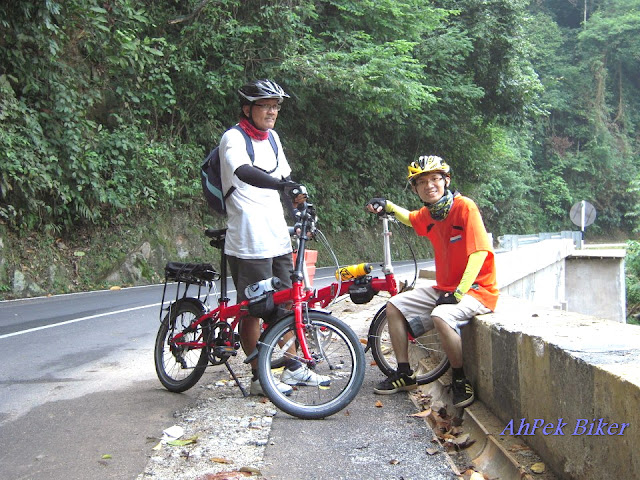 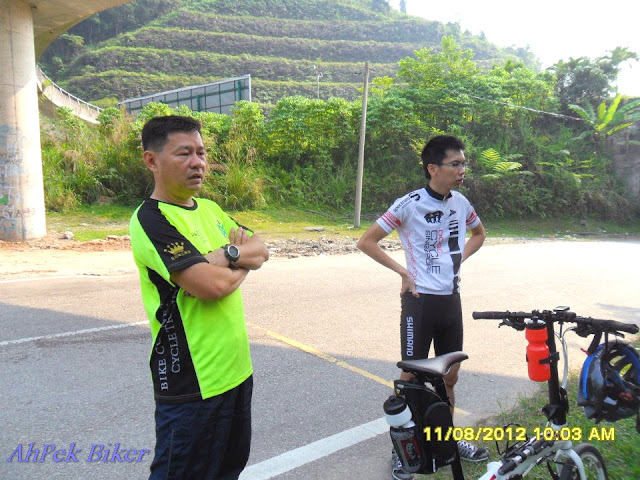 And brothers bonding - David and Will Ong. 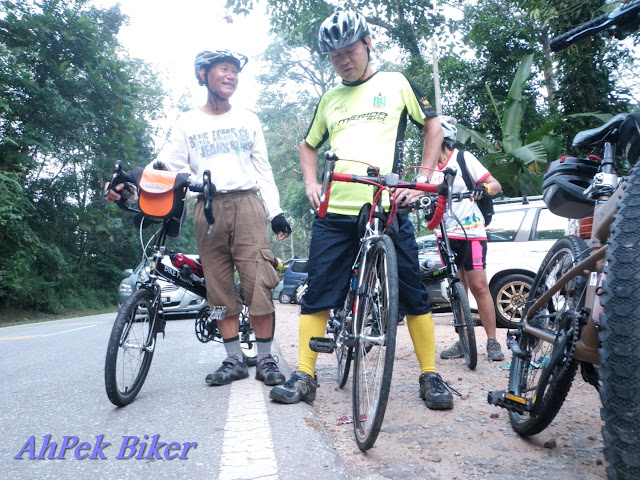 And we kicked off from the Batu 12, Gombak Check Point. 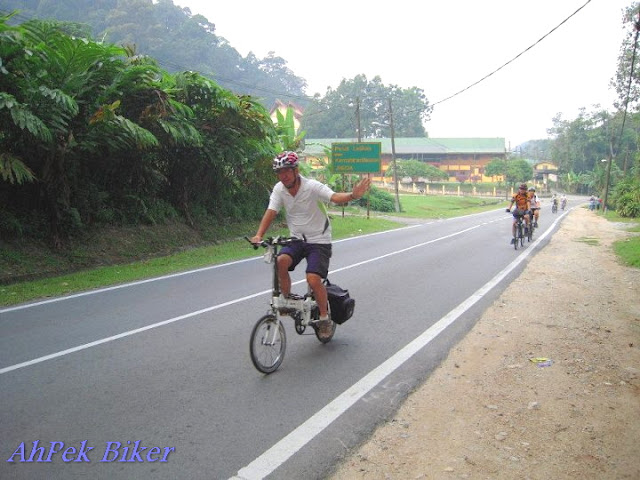 The start was a gentle slope, just to warm us up.


Rivern had mentioned that 80% of the route will be with canopy cover, and the morning temperature cooling. I must agree with him, the cover helped shade us in our effort up the steep slopes. And the cooling temperature of not more than 24 degrees made for a comfortable ride at most of the gentler roads. 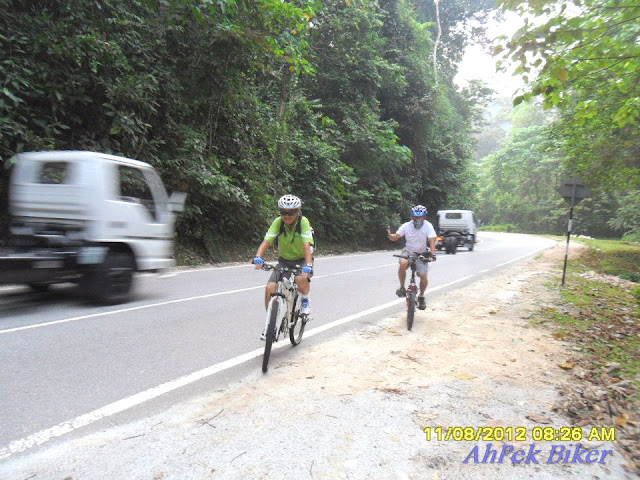 The traffic was surprisingly light, with the occasional vehicle passing by once in a while. But because of the sharp corners, we took care in listening out for them. This route is also a favorite among cyclists, and we met many other riders on the way up & down. 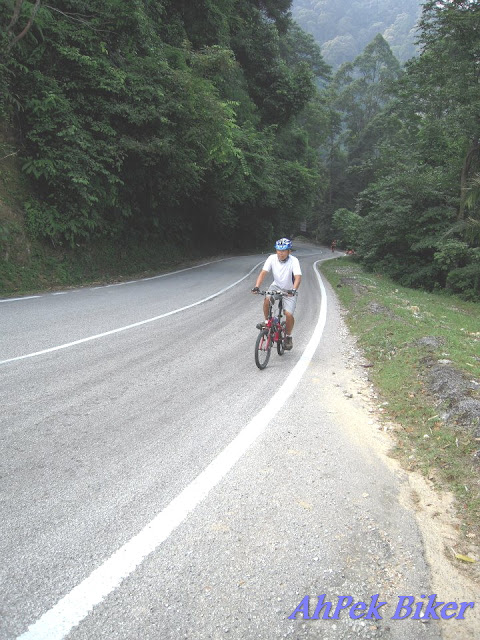 But soon the slopes were not so gentle any more. The fitter and more experience riders were soon far ahead, and we couldn't spot them anymore. Newbies like me and a couple more were lagging behind. 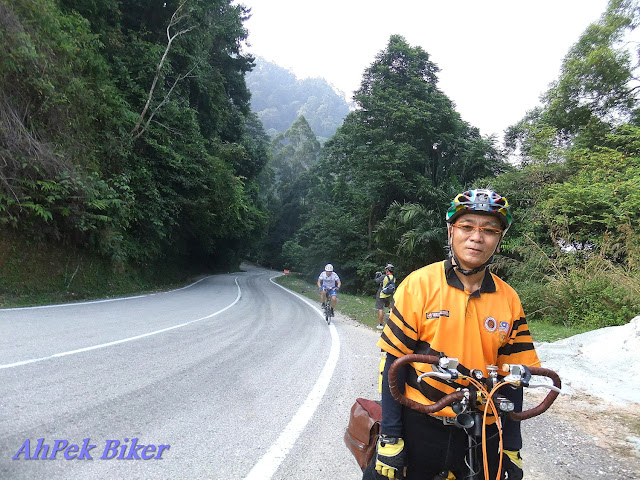 As the gradient got even more steeper, I had to take it a my own slower pace. Rivern and Kookkeong could sense my difficulty and stopped to wait for me. 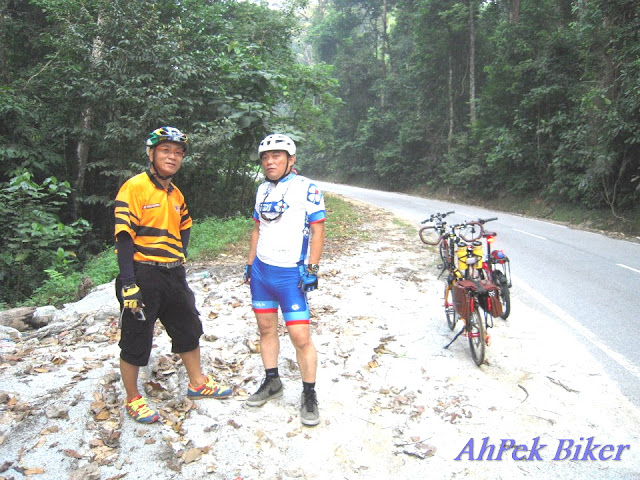 I stopped too. It was a good short stop for me -  for a breather and a drink also. 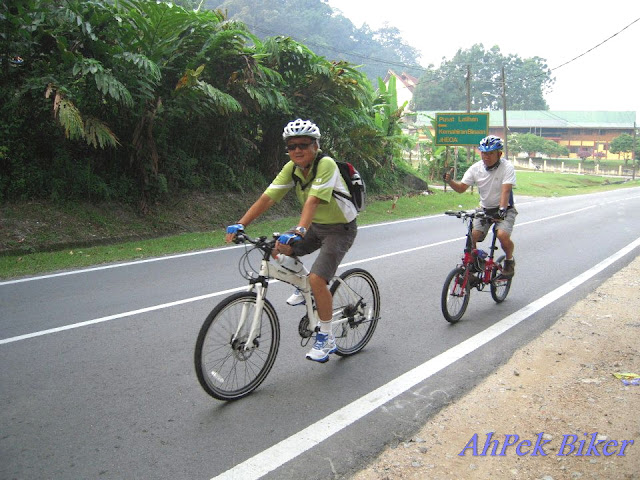 Sin was slightly further behind, accompanying another newbie friend. That's what riding comradeship is about - we take care of each other.


After that short rest, Rivern was riding next to me, chatting and joking. And this soon put my mind at ease, and we were riding more casually - being able to enjoy the scenery and making friends with Mother Nature. 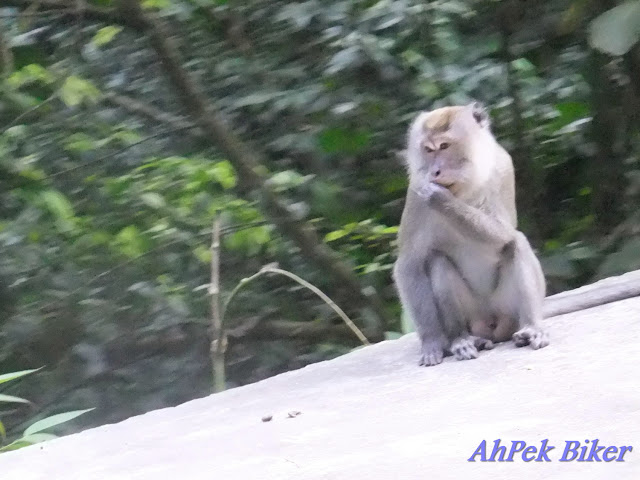 And also making new friends with the residents. 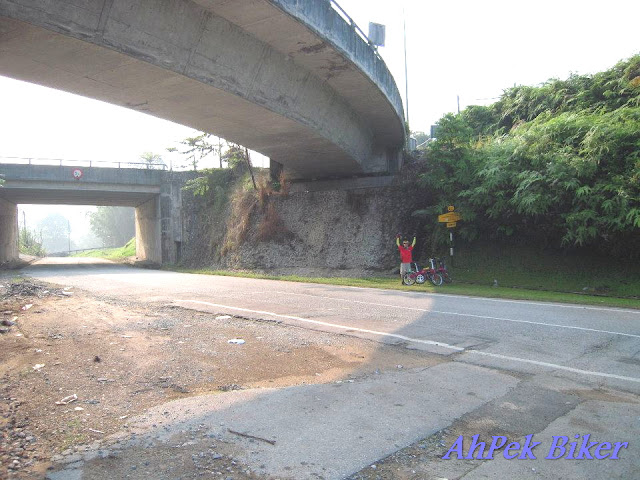 The last 5km of the ride was even steeper, and I struggled on. Sin was shouting out encouragement, "Almost there! Almost there!". Which was true enough, as we soon spotted the fly-overs at Genting Sempah (Last Checkpoint) 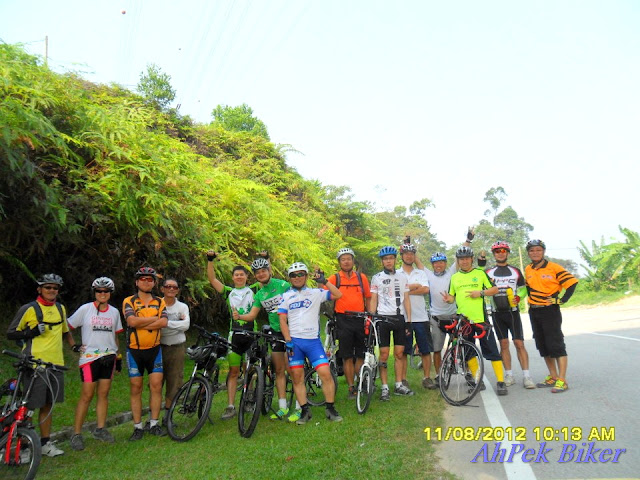 The rest of the group were already there waiting. With us coming in, the group was completed, and we lined up to take another photo. 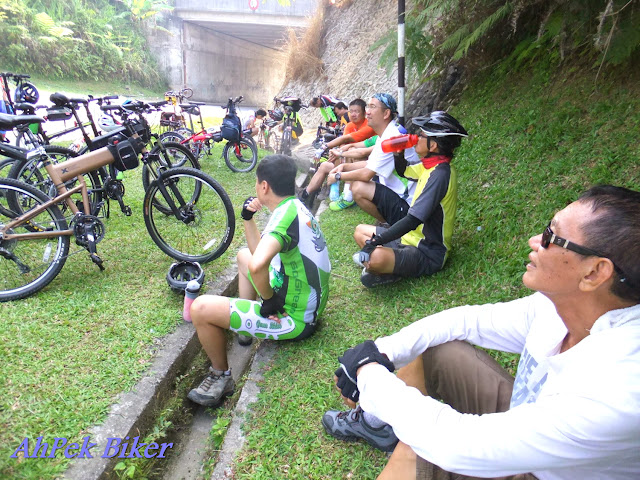 We had a good and well-earned rest, chatting, joking and trading biking stories. 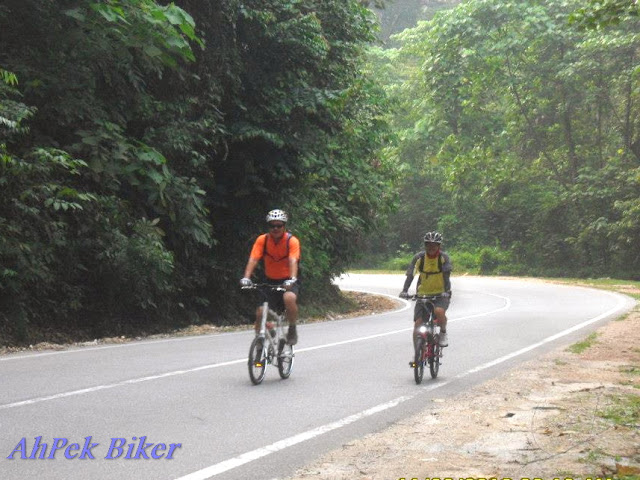 Soon we were riding down and back, easily rolling down the slope. I wanted to try out the speed of my bike, and said a courteous bye to Kookkeong, who was riding with me, and went speeding off. My Dahon Dash P18 performed well down slope, I could even pedal to gain more speed. But at the sharp bends  I slowed down for safety.


Our riding route is a trunk road running adjacent and parallel to the Karak Highway . This highway connects to the East Coast Expressway that leads to Kuantan, Pahang. But the road was often much higher than the Highway. At times up to 500ft. above it. The above shot by Sin illustrates this. 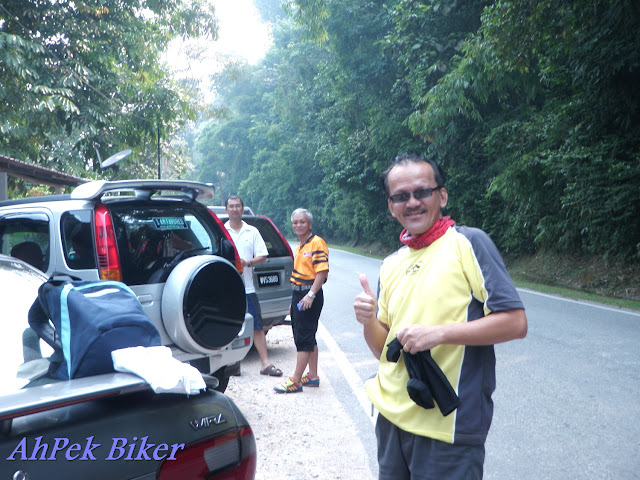 The ride down was fast, and soon we were all back at our start point, happy and smiling at our latest achievement. 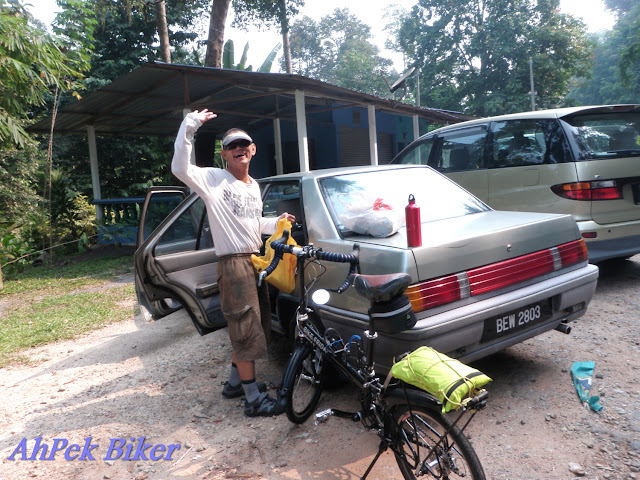 We started packing our bikes back into our cars. Some of us waved goodbye whilst the rest proceeded to lunch. 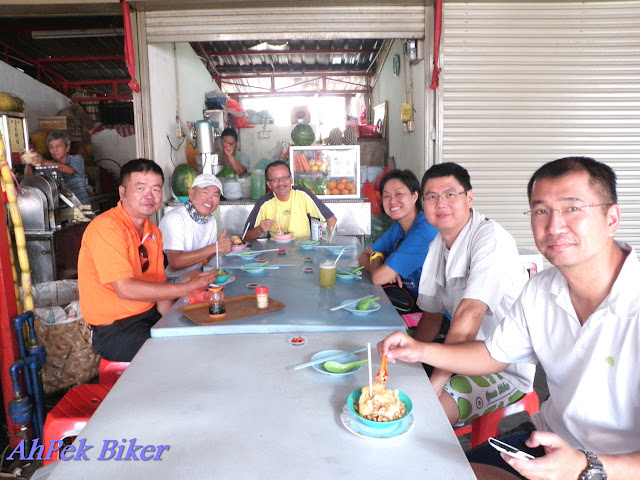 Lunch was at the Air Panas Market hawker center, a simple place with relatively cheap food. 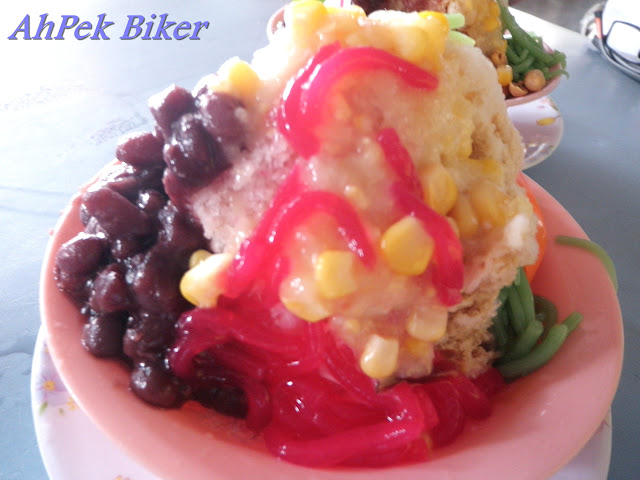 For refreshments, we had sugar-cane water, ice-kacang, etc. to quench our thirst. I went for this ice-kacang without the kacang. Haha!


The regular cooked-dishes stall was close, so we ordered several noodles from another stall to satisfy our hunger. Starting with this Fried Fresh-water Prawns noodles.


and then this Fried Bitter Gourd flat rice noodles.


and finally this Fried Duck noodles.


With this concludes or ride, one that has been interesting and well planned by My Cyclist Friends.
Till the next ride..... Adieu!

UPDATE OCTOBER 2014:
Traffic along this stretch is getting heavier. It is advisable to ride here during Sundays when the traffic is not so heavy.
(... see an updated ride of the Genting Sempah Route which I did in 2016, one with surprising twists).

Acknowledgements - Some of the photos are courtesy of Rivern, Kookkeong & Sin
You are at - Jotaro's Blog / AhPek Biker / Cycling Malaysia / Selangor / Gombak to Genting Sempah Ride
If you like this, view my other blogs at Jotaro's Blog
(comments most welcomed below. if you like this pls share via facebook or twitter)
Posted by Jotaro Zen at 11:39 PM