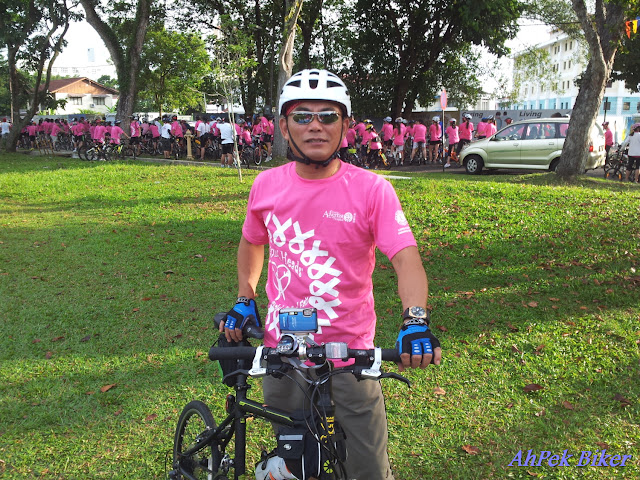 PRELUDE
During my ride with the Mini Velo group two days prior (see Penang Ride : 2012/08/24),  Alvin had mentioned to me that they would be having a Charity Ride in conjunction with the Penang Adventist Hospital ’88 Shining Heads’ Charity Go Bald and Food Fair event, and I would be most welcomed to join them. 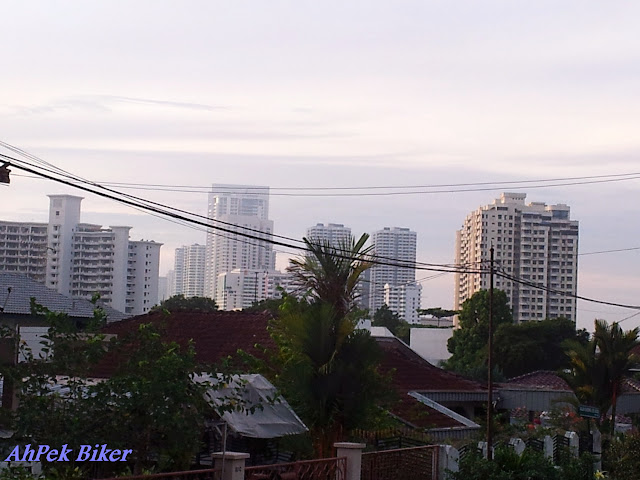 I was a bit hesitant to commit myself as I had a planned ride from  Tanjong Tokong to Balik Pulau the day before and was worried that I would be too zonked out to attend this charity ride. But due to some unforeseen circumstances, that ride was canceled and I was left with a lot of pent up energy. So on that early Sunday morning I pedaled down to the Scott Road field to meet my new found friends and join them in the effort for charity. 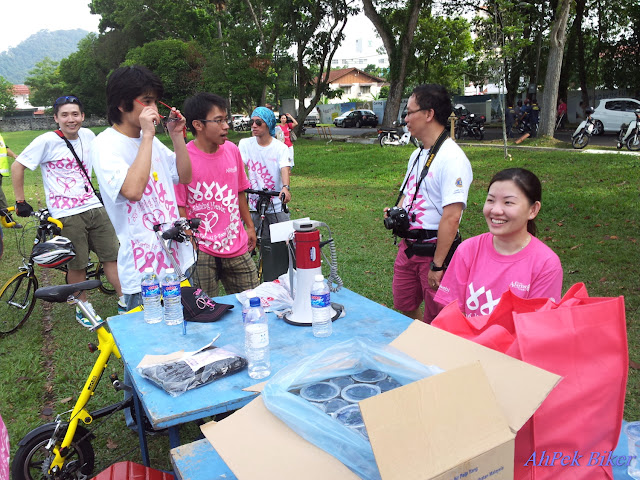 I reached the Scott Road field and promptly registered myself, but in my haste, I had forgotten to bring my wallet and a kind Alvin allowed me to pay later. I was given a nice bright pink, souvenir T-shirt which I quickly and proudly donned. 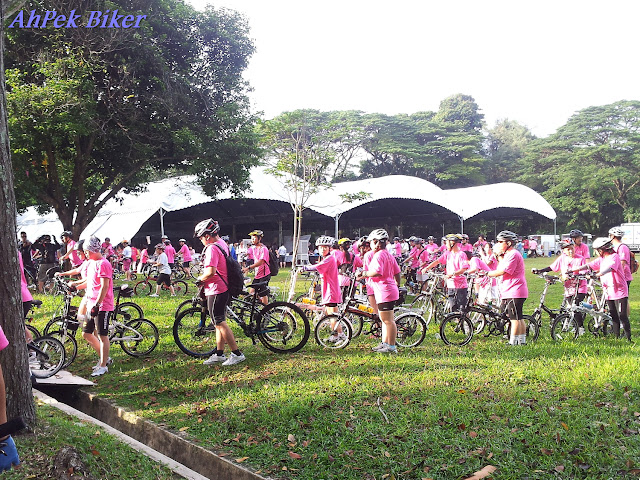 The bikers were briefed on the safety aspects of the ride and advised not to overtake the leaders and to stay within the group. A couple of police outriders would be clearing traffic ahead of the cyclists and RELA members were also at hand to streamline the ride. The organizers themselves would have marshals along the way to help out. With that the bikers pushed their bikes to Scott Road to line up for the start. 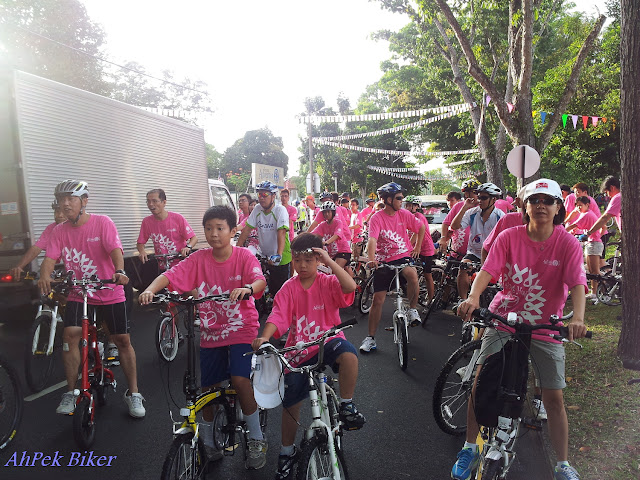 And here we are bikers, male & female, old & young, from near & far - all with different bikes big & small, all united in support of charity - eager to start off, to show that we all care. 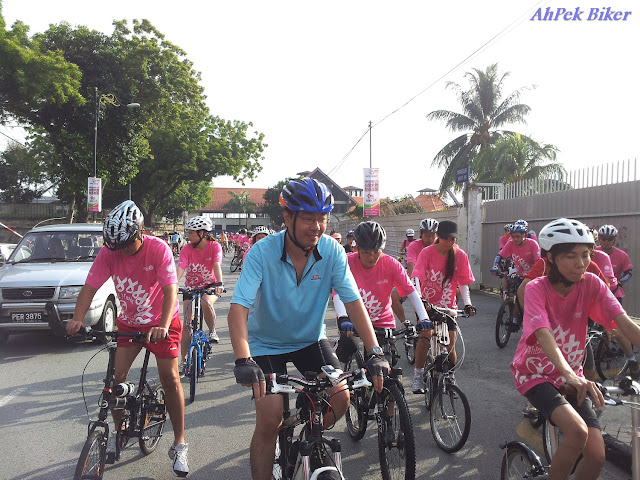 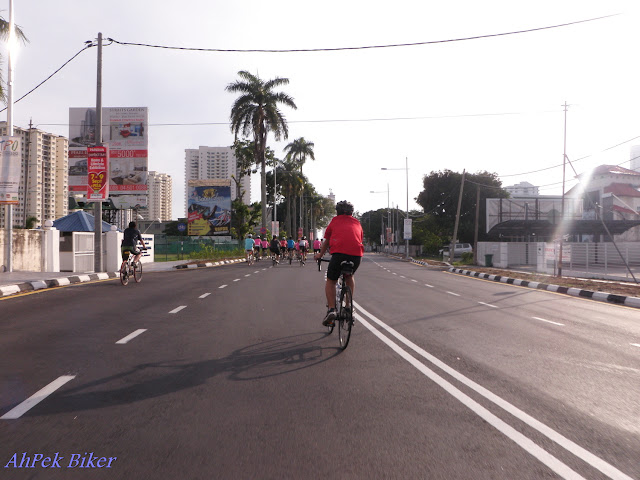 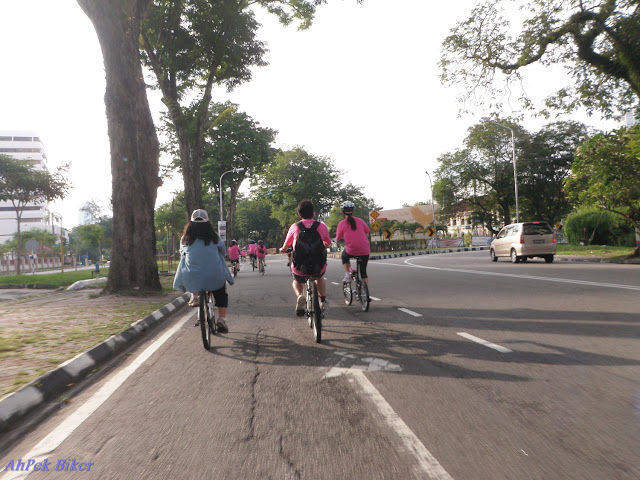 We rode from the suburban area down to the Heritage Zone and to the busy Central Business District of  Komtar. 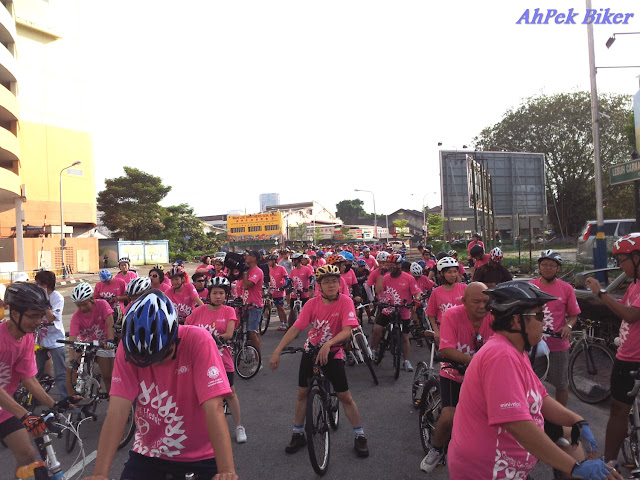 At Lebuh McNair, adjacent to the 1st Avenure Mall, we stopped for a regrouping and a rest before continuing on. 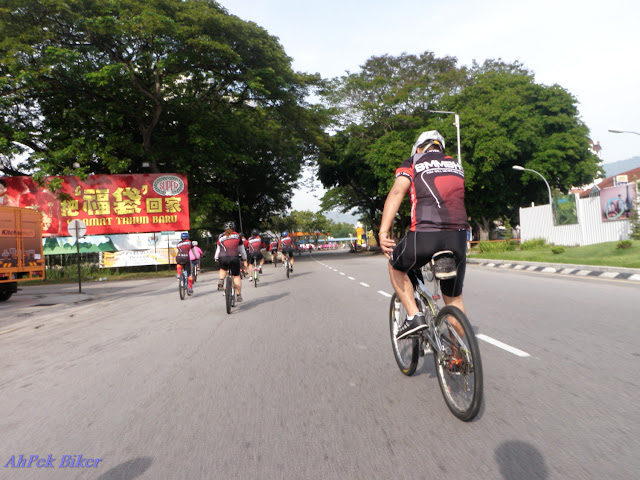 These are the strong mountain bikers from Bukit Merajam, there were even a couple of tough ladies among them. 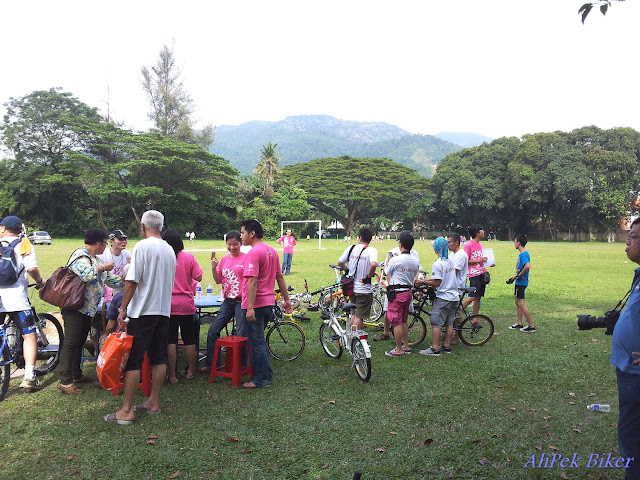 This was a short leisure ride, and soon we were back at the soothing greenery of the Scott Road field. 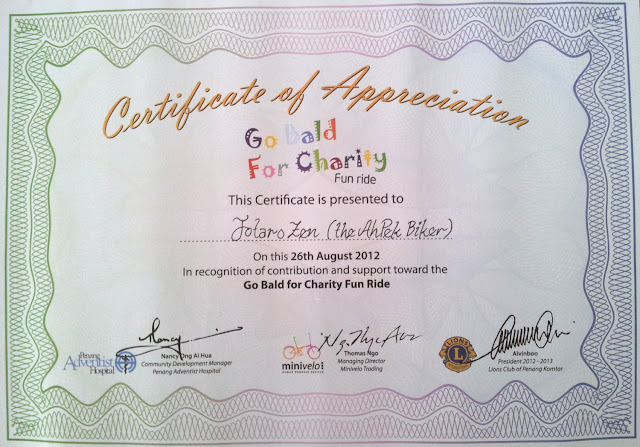 We were even given a Certificate of Appreciation as acknowledgement of our support. 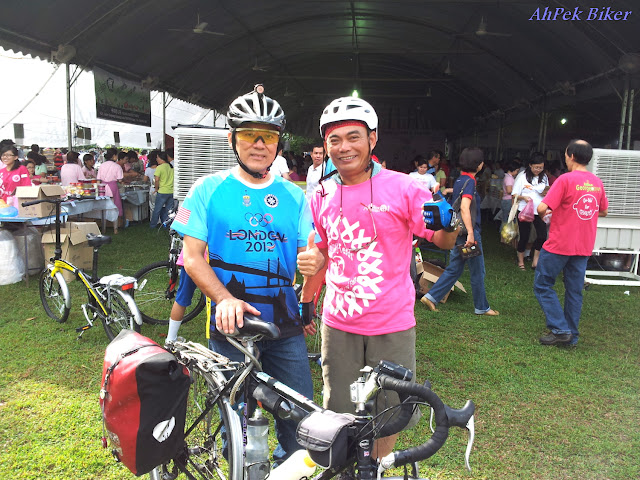 While cooling off, I hung around and socialized with the people attending the event. Here I am with Penang State Assemblyman YB Teh Che Yu, an avid supporter of cycling. He cycles everywhere - to work, to market, etc. 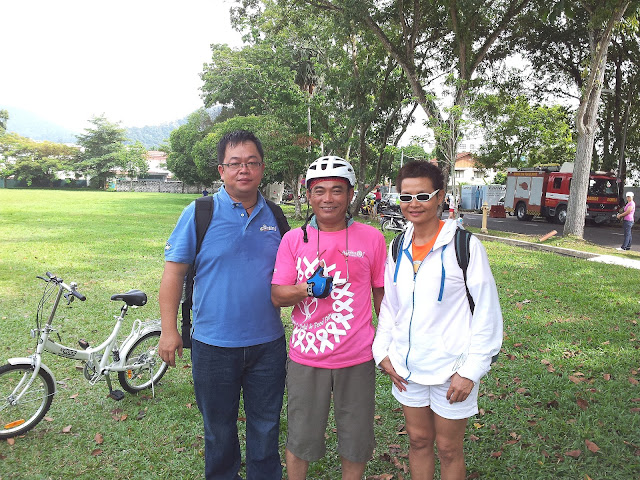 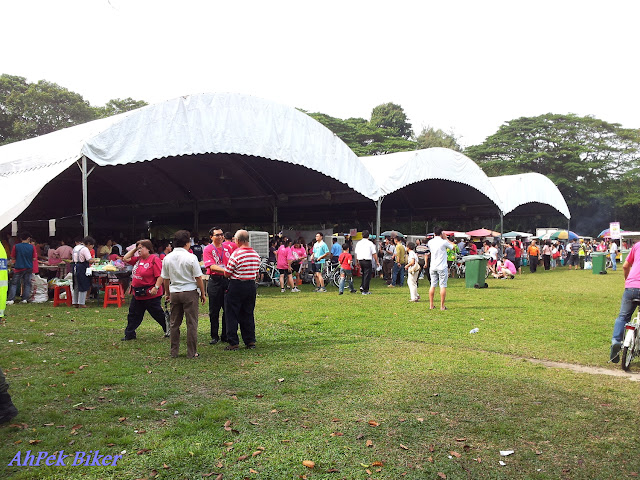 Now that the ride is over, the charity stalls beckons. Time to generously buy some vouchers and do our bit too. 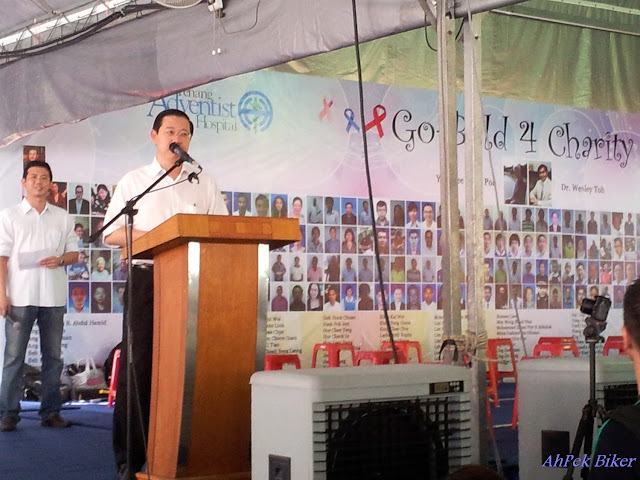 When I entered the giant tents, the Chief Minister was just about to give his speech. His eloquent speech captivated the audience. 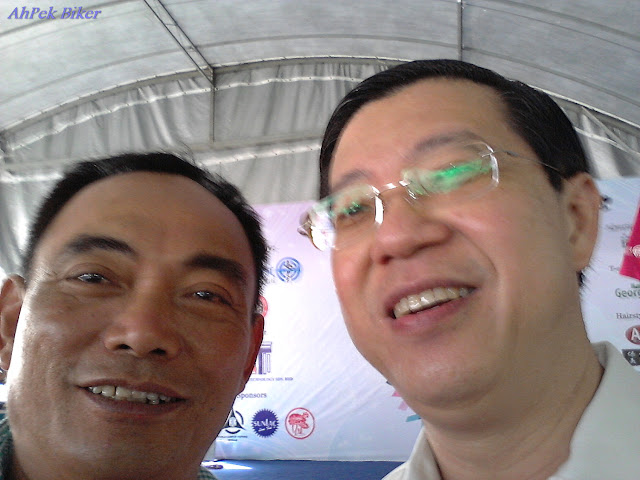 After his speech, I requested for a picture to be taken with him. He is a humble person and sportingly posed with me. This is one picture that I will treasure, after all it's not everyday that the AhPek gets to pose with an "orang besar". 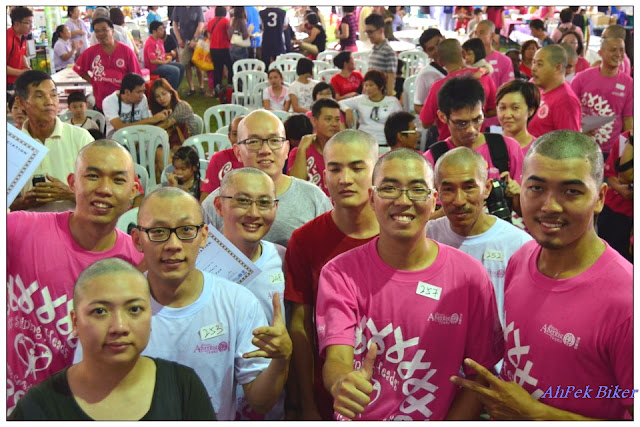 After his speech, the brave volunteers had their heads cut/shaved bald hence the term "Shining Heads". Of course they have got fair contributions to charity for their "sacrifice". 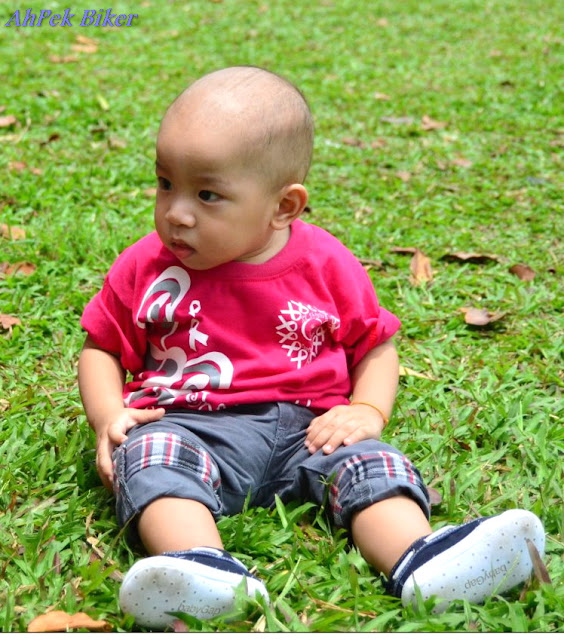 Even a young toddler did his part, wearing the same T-shirt and having his head shiny too. In future, when he is older, he will probably look back in posterity and be proud that he has contributed also. 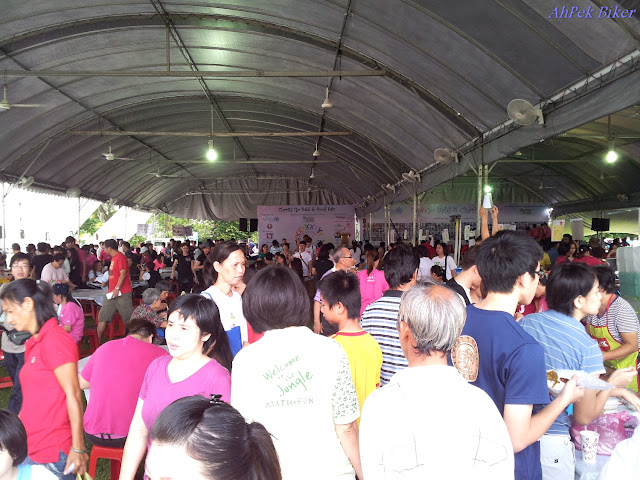 The crowd in attendance would have made any Penangite proud; showing the rest that contrary to belief, Penangites have good hearts and are not stingy when it comes to giving to charity. 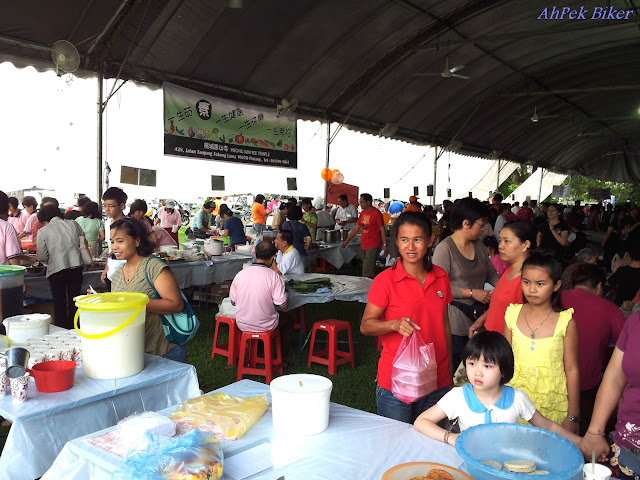 There were a food number of food stalls lining the perimeter of the huge tents, offering may different and delicious food to savor. With that many stalls, I will be running out of coupons soon - time to top up and buy more! 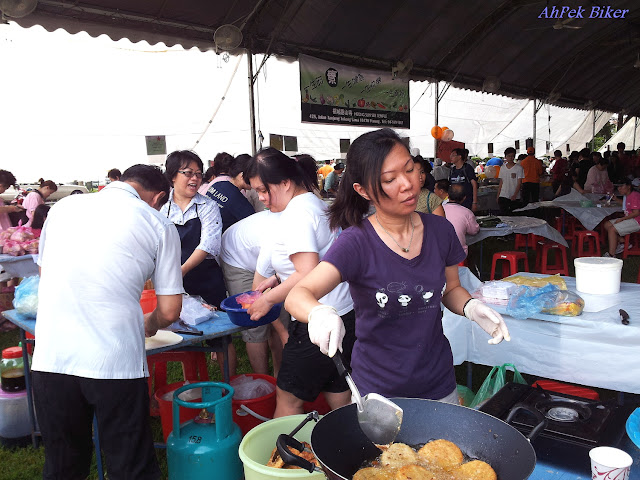 This lady volunteer has a unique quick way of mass-producing burgers; she deep fries the beef patties. You won't see a long queue here as they will be served pretty fast!


My many thanks and appreciation to Ngo Thye Aun, Alvin Boo, Jaron Oon and the rest of the organizers of this ride for giving me this opportunity to do my part. 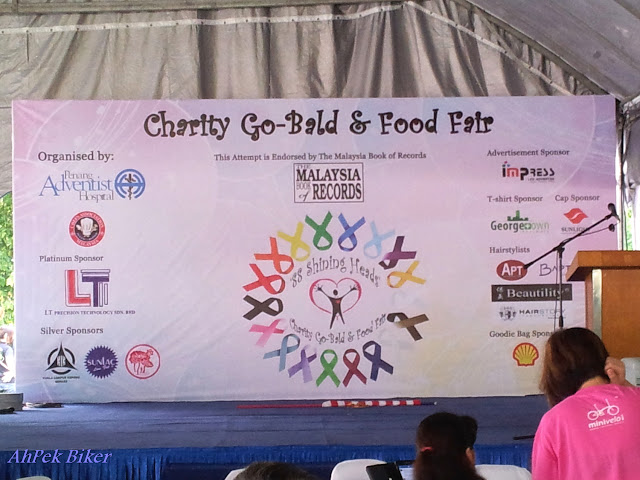 Some of the photos here are courtesy from Jaron Oon. Thanks buddy!

You are at - Jotaro's Blog / AhPek Biker / Cycling Malaysia / Penang / Ride 26th August 2012
If you like this, view my other blogs at Jotaro's Blog
(comments most welcomed below. if you like this pls share via facebook or twitter)
Posted by Jotaro Zen at 10:23 AM