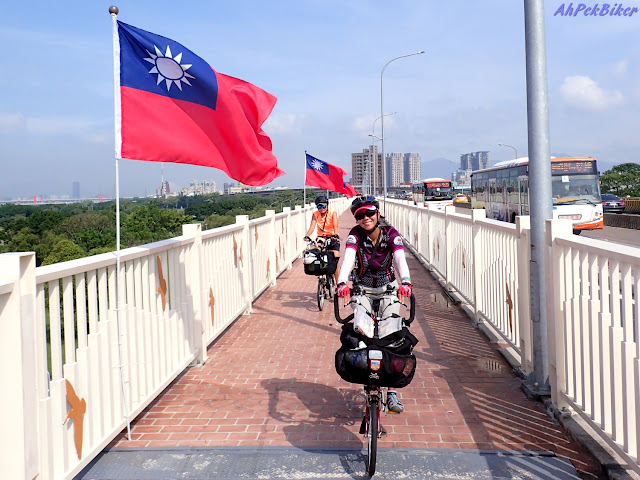 Taiwan (台湾) has always intrigued me. An island state, with colorful aboriginal people comes to my mind. But it is more than that; it's a country with bustling metropolises, beautiful countrysides, scenic shores and more!
So I was mighty glad to be part of a small group of cyclists who went on a bike-packing tour there. Sin was our ride leader, planning the routes and researching the destinations. Anne was co-planner and researcher too, while Fenn was our treasurer keeping our joint pool of funds well. Heong added color to the team with a gay laughter. With his keen eyes for good shots, Robert was the photographer and I was sort of archivist and part navigator. Overall we had good fun there, found the locals to be very helpful and the island full of diversity in scenery and a varied ride quality.
Taiwan is also another milestone in my cycling career, another feather to my cap as it is the 20th country in the world that I have cycled in. For a list of countries that I had rode in click here to go to the AhPek Biker main page. Much further below are related blogs and tips on cycling in Taiwan.

RIDE BLOGS
Below are the blogs of our cycling tour, click on the respective photos to read. It was an eye-opening tour for me so come see our rides:

Here's, some general tips on cycling in Taiwan (台湾), more detailed tips will be included in the day to day blogs:

1. Traffic Directions!
Traffic in Taiwan (台湾) is left-hand drive, so cycle on the right. Same thing applies when crossing the road, take note of the direction in which traffic is approaching from!

2. Route & Traffic Conditions
Taiwan (台湾) has very well developed cycling routes that run in the cities, town, villages, and country side. Most of the route is on Taiwan's National Cycling Route 1 and its branches (Route 1-19, 1-20, etc.). Most of these are shared lanes with motorcycles, while some are on general roads marked with cycling icons. There are several sections of beautiful fully dedicated cycling paths. We took a anti-clockwise route so as to be on the sea-ward side to view the scenic coast.
In the cities and towns, note that at traffic lights intersections there are marked up boxes up front for motor-cyclists and cyclists to wait for the light to turn green (usually there is a count-down). It's a good system and cyclists then don't have to be squeezed dangerously in between cars/trucks at the lights.
Click here to download a PDF guide on Cycling Around Taiwan.

3. Weather
It was autumn and weather for amicably cool, ranging from 25°C to 27°C on the average for the days, although on some days it did hit a high of 29°C and low of 23°C.  At night it ranged from 18°C to 20°C on the average. It starts to get dark after 5:00pm so, other than town/city cycling, plan your cycling to end before that.
Wind speed does get pretty high, especially on the east coast (on anti-clockwise it would mean strong headwinds and for the luck clockwise cyclist, it's a good, helping tailwind. Wind speed averages 12 km/h but at the eastern coast it can reach up to 50 km/h. Strongest winds were experienced on the south-eastern coast with speed lashing down up to 70 km/h.
We fortunate that, other than two days each of light rain at our start and end in Taipei, it was beautifully sunny.
Useful weather forecast sites for the Taiwan are the Taiwan Central Weather Bureau and AccuWeather. For more detailed weather, including cloud cover and wind speed, use Weatherspark and Ventusky.

4. Travelling By Trains And Bringing Bikes Onto Trains In Taiwan
Folding bicycle are allowed onto most trains (express, local and metro trains) but must be bagged before entering the platform, and only unbagged after leaving the platform. Unbagged folding bikes (and full-sized bikes) will usually face a charge equivalent to 50% of the fare. Do note that at smaller stations there are not lifts or escalators for getting to the platforms, so do expect some carrying across bridges or underpasses. A few stations do provide bike-way for pushing across the tracks, do look for signages indicating these; but use of them is subject to the station master's discretion on safety.
For more details on charges on bringing bikes onto the different trains (local or express trains) click here for the Taiwan Railway Administration Guide On Carriage of Bicycles.
Click here for a link to the Taiwan Railways Administration (TRA) website for booking train routes and fares; and also to see which railway line totally does not allow bicycles on board.
Click here for guidelines on bring folding bikes onto the Taipei Metro.
Train services are quite regular between larger towns, but at smaller towns services may not be that regular (perhaps like every two or three hours). Do check at the respective stations for the train schedules or at this TRA booking site link.
For the respective train route fares, refer to the respective daily blogs.

6. Bringing Bikes Onto Buses
We found that our folded bikes could be brought onto the intercity buses, but should be bagged and put into the passenger hold. We did not take local buses as we were uncertain whether bagged bikes were allowed on board. Click here to see a forum discussion on bringing bikes onto buses.

7. Bringing Bikes Onto Planes
We flew Air Asia (AA) from Kuala Lumpur to Taipei. AA charges for sports equipment I booked 20kg for the outgoing flight and 25kg for the return so that my cycling gear (jerseys, zippable pants, etc) with shopping purchases could be put into a spare second Dimpa Bag. My Brompton bicycle was packed into a first Dimpa. AA allows cabin luggage of two pieces (a normal cabin sized bag with another smaller bag); both must not weigh more than a total of 7kg. AA is very strict on this policy and will charge for any weight beyond this.
A tip, simple but important. Ensure that you DO NOT carry your tool kits or any long/sharp metal objects in your hand luggage. Put your tool kit into your checked-in bike bags. I often seen friends forgetting about this, only to have their tools confiscated at the security checkpoints.
Alternatively, look for early bargain deals from MAS (Malaysian Airlines System) which allows 30kg of luggage inclusive of bicycles without additional charges. Seating is more comfortable with free food/drinks and on-board electronic entertainment. Couple these perks in and MAS fare could end up cheaper than AA's total fare.

8. Communicating with Each Other
When travelling in a group it's important to be able to communicate with each other, especially if one got lost from the rest.
At Taipei Taoyuan Airport Terminal One, just after exiting the into the arrival hall, there are several booths on the left selling pre-paid phone SIM cards. We got pre-paid 4G prepaid SIM cards from Chung Hwa as they had good coverage even in remote areas. These cost NTD1,000 for a 30-day plan that includes unlimited data and NTD$430 credit for texts or calls. These can also be booked on line.
Those without sim card could try using free Wifi that are sometimes available at the airport, some bigger train stations or hotels; do note that these free wifi may not be secure and registration could be required.

9. Communicating with Locals
Most Taiwanese (台湾人) speaks Mandarin (官话) and Hokkien (福建話), and very few speak English. So it would be good to have a person in the team who can converse in Mandarin or Hokkien.
When communicating with locals is a problem, this could be partly overcome by using translation apps like Google Translate. Do install this app into your phone and before you leave on your tour do some basic translation as it will be saved onto a list of recent translations.
Look out for the tourist information booths at airports, railway stations or bus stations, the guides manning the booths speak good English and do give good tips on where to visit, directions, train and bus schedules.

10. Accommodations
Reasonably priced accommodations can be found at motels with pricing ranging from NTD1,000 to NTD1,200 for a room for two. At some places where accommodations were pricier we stayed in a room for four or six pax. Some were B&Bs where breakfast was inclusive. Do note that accommodations in Taipei cost more.
For most of the places we did not pre-book rooms. Online prebooking was made for Taipei, Sun Moon Lake and Taroko Gorge. For hotels/motels, search the web for accommodations searching sites like Agoda.com, Booking.com or Hotels.com. HotelsCombined. com which provides comparative rates. Most of these sites allow bookings to be cancelled three days before the staying dates; but do not that some accommodations themselves do not allow this feature. For details of our accommodations, refer to the day to day blogs.
Most of the accommodations allowed us to bring our bagged foldies into the room. Others let us use the store rooms at the ground floor, as a precaution we lock our bikes when put into these store rooms.

11. Food
Taiwan has a wide range of delicious food sold at many eateries ranging from small road-side stalls to large restaurants. Often it is at the smaller towns and villages that we find good and unique local food. An odd thing though, at the cities and larger towns food stalls do not sell drinks, one would have to go to another shop or a convenience store to get them.
Many night markets have sections with stalls that offer a wide variety of good food. But most stalls don't have seating for eating; and those that do have don't allow other food to be eaten at their tables. The night markets at the cities and larger towns can get rather crowded, and walking through them is a difficult squeeze. This coupled with the seating problem made us avoid eating at the night markets.
Often we of us also purchased sandwiches/pastry as emergency rations from 24-hr convenience stores (like Family Mart and 7-11) just in case we could not find any food along the way.

12. Navigation
Unless he or she is very familiar with the locals routes, the tour leader should carry a GPS units. It will also be good if another member of the team carry another GPS unit should the leader's one go faulty. Sin together with Robert brought these along and had pre-loaded the Taiwan Maps together with GPS coordinates of our destinations.
Alternatively, download the MAPS.ME app together with the relevant country maps. This app can be used offline.
Google Maps can also be used in Walking Mode for navigation but there is a lag when starting off, so one would have to cycle a bit to get the orientation right. Google Maps is also useful as it shows various places of interests that were not shown on our GPS units.

13. Service Your Bicycles & Carry Tools and Spares
Before leaving on your tour, it will be good to service your bike and bring along some spares like tubes, puncture patches, brake pads and the relevant tools.