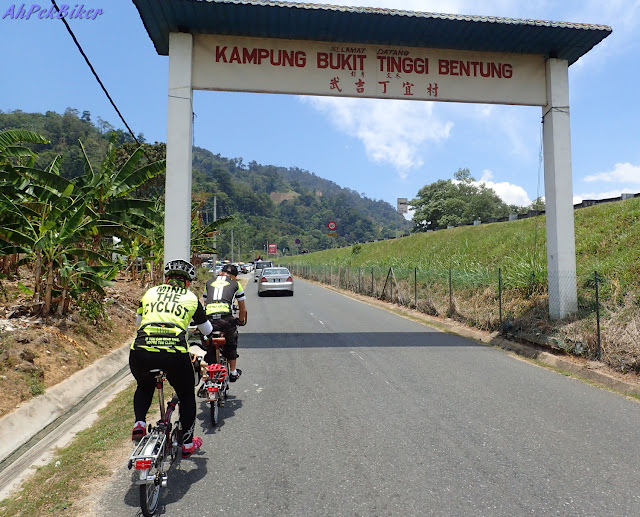 Route Recommendations :
1. The road from Gombak to Genting Sempah is quite shady and cooling. Start riding early in the morning (around 7:00am) to avoid the heat on the return journey. We started from Setiawangsa and by the time we hit Gombak it was mid-morning and getting hot. Our return was in the afternoon and it was even hotter still as Malaysia was then facing the El Niño Effect which brought a hotter hot season.
2. From Setiawangsa to Gombak the roads are quite flat, with only some moderate slopes at the Setiawangsa and Wangsa Maju locality. But after Gombak's Hospital Orang Asli (HOA) there is a continuous climb for fifteen km. till Genting Sempah and slightly beyond. After that it slopes down to Bukit Tinggi village. Of course the return route is the reverse, a bit of climb and then whooshing down slope after that.
3. The Gombak to Genting Sempah road (called Jalan Gombak or Federal Route 68) can be quite busy during the weekdays, so it's better to cycle here during on a Sunday.
4. Points of Interest:
- Generally there is no particular points of interest, the route itself is of interest as it wends through secondary jungle. At a couple of spots along the way there are good view points overlooking the Karak Highway.
- At Bukit Tinggi village (GPS: 3.34955, 101.82138) there are many stall selling fruits and the renown Bentong Ginger. If buying, bargain for the best price as many stalls charge touristy pricing.
5. Food
- Breakfast was at a Nasi Melayu shop along Jalan Gombak (GPS: 3.26594, 101.72694).
- Lunch was very good wantan noodles & roast duck at Restaurant Zheng Ji (GPS: 3.35461, 101.82768) in Bukit Tinggi town.
- Pretty decent coffee at a coffeeshop at Bukit Tinggi village (GPS: 3.34955, 101.82138).

How time flies! And it's flies even faster when one is having much fun in life!
More than four years have passed since I rode to Genting Sempah. Back then I was a green-horn, a newbie to cycling; and taking on the slopes up to Genting Sempah was a challenging milestone. Fortunately, Rivern and Kookkeong accompanied me on the ride up, chit-chatting with me almost all the way. And the rigours of the slope seemed to lighten and vanished as we talked; before I realised it we were at Genting Sempah. 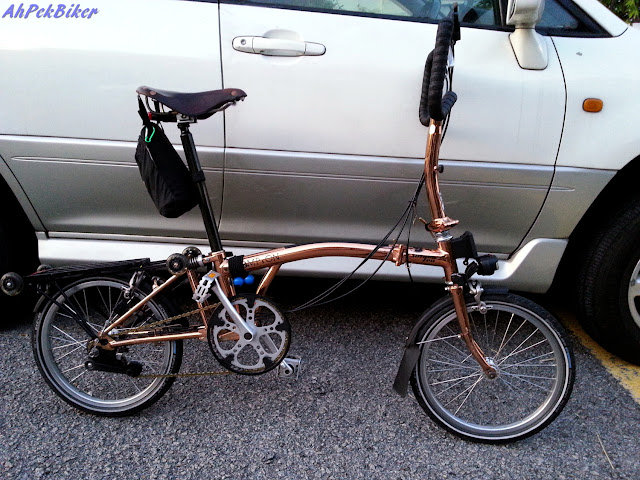 I frequently send my Brompton to Felix for some servicing (he's quite good at that actually), and often when I go collect my bike a few days later, we will go for a good spin. What better way to test the bike after the servicing than a good ride?
This time round, he casually mentioned riding to Genting Sempah. "Why not?" I replied, "it's been a while since I rode there." But as usual, surprises always come to this AhPek. Normally, a ride to Genting Sempah would start at Gombak, near the HOA (Hospital Orang Asli); so that morning I collected my bike from Felix's place in Setiawangsa and was about to load it up into my car for the drive over to HOA.
That's when surprise numero uno came in.... "Hold on to your horses, AhPek", Felix casually mentioned (he always talks in a soft, calm casual manner), " we are starting from here!"
Gulped.... HOA is 20km away, meaning a 40km additional to the usual 30km Genting Sempah loop. Okay, okay.... 70km is not that bad and the serious climb is only for 15km.

SO LET'S GO!!
(Hahahah! But there would be more surprises to come.)


Cycling Route - Setiawangsa>Wardieburn>Gombak>Genting Sempah>Bukit Tinggi & back.
The route starts off passing through the residential suburbs of Setiawangsa and Wangsa Maju; and continues through rural kampogs and secondary jungle from Jalan Gombak. After the Hospital Orang Asli (HOA) the road is a continuous until Genting Sempah before sloping down to Bukit Tinggi.

The elevation graph shows a climb of close to 600 metres from the start up till Genting Sempah. Then it was dowards to Bukit Tinggi before a return climb with an elevation of about 300 metres back to Genting Sempah before rolling down almost all the way back. 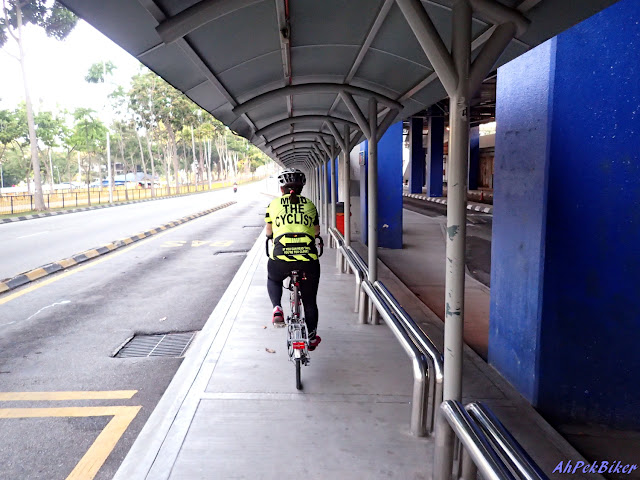 7:30am - We rolled off from Setiawangsa riding down the pavements along the Setiawangsa LRT Station. It's a Sunday and the station was surprisingly quiet, no hustle and bustle unlike the busy weekdays.
From here we cut through Wangsa Melawati and Wangsa Maju along some mini dragonbacks to reach the main thoroughfare Jalan Genting Klang; it was still a relatively cool morning and I had thought Felix would be stopping over here for breakfast at our usual makan joints, but know we just sailed along. 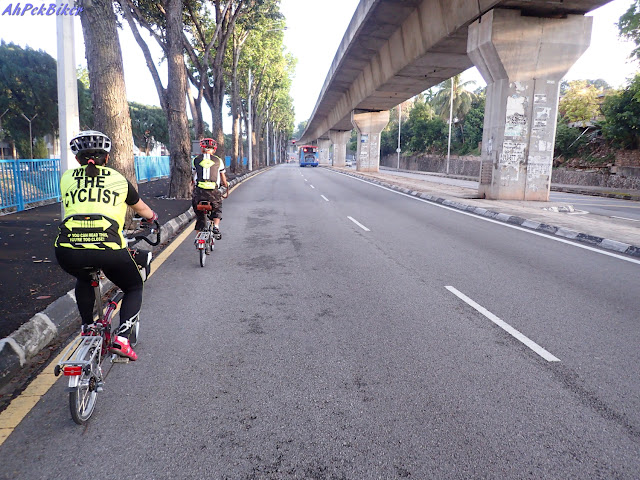 Across from Jalan Genting Klang we rode passed Kolej Tengku Abdul Rahman riding below the elevated tracks of the light rail transit. Further on the scene changed from modern housing to that of kampong village housing. 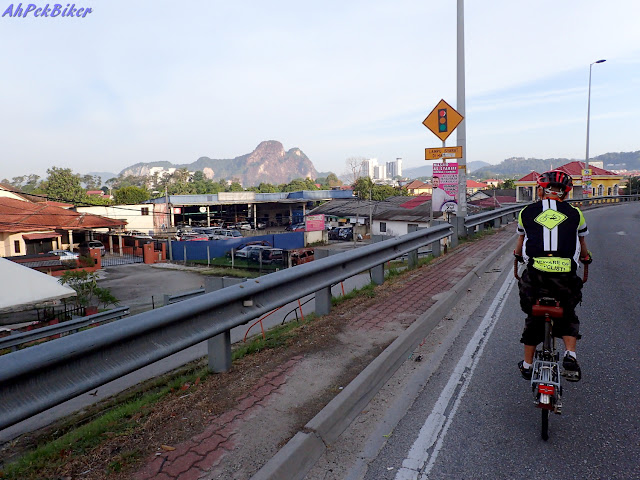 Far ahead, we can see the white limestone cliffs of Batu Caves. But we would not be heading there and veered right towards Jalan Gombak which was somewhat busier than the residential roads. Somewhere along that road we finally made our first stop, one for breakfast of Nasi Melayu and Roti Canai at one of the road-side lean-to shops. 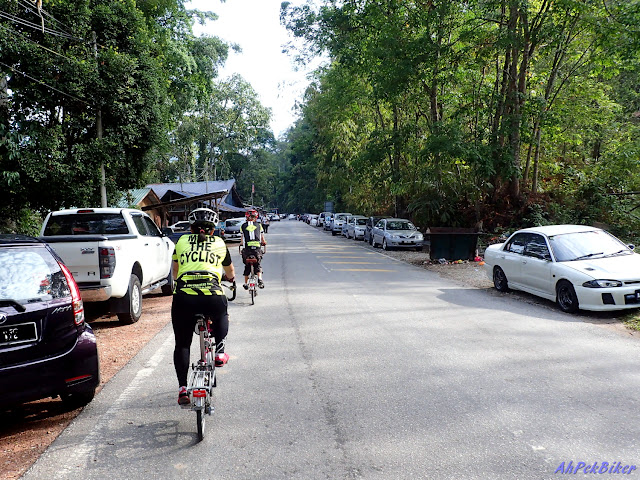 9:30 am - We are at the Hospital Orang Asli, the usual kick-off point for cyclist riding to Genting Sempah. We see many cars parked at the road shoulders, but their owners were not around, as most would start from this point at around 7:30am at the latest when it is very much cooler. AND here we were two hours behind the usual, and the morning was starting to get warm! 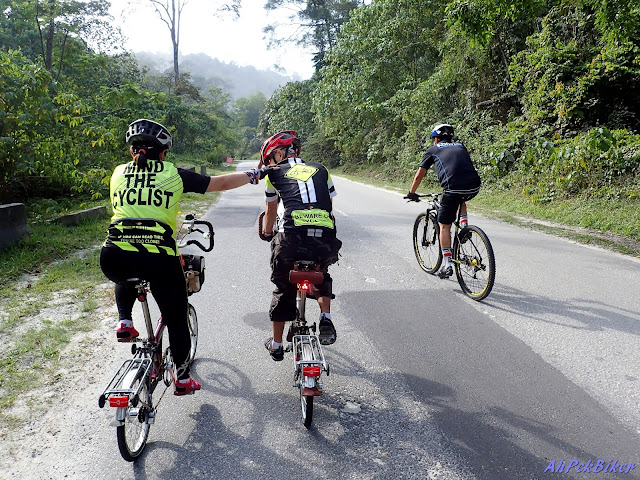 It was from this point that the real fun begins as the road slopes continuously onwards for the next fifteen kilometres. It was not a very steep slope, but the unstopping climb tax many and a helping hand was most welcomed to warm up for a more vigourous ride ahead. 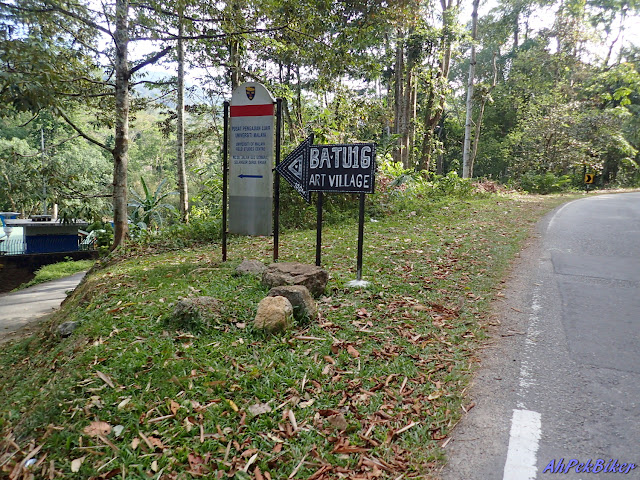 The place had not changed much, but I was surprised to see an Art Village here at Batu 16 (16th Mile). I love art (.... see my art blogs) but we were on the roll and did not stop for any aesthetic appreciation. 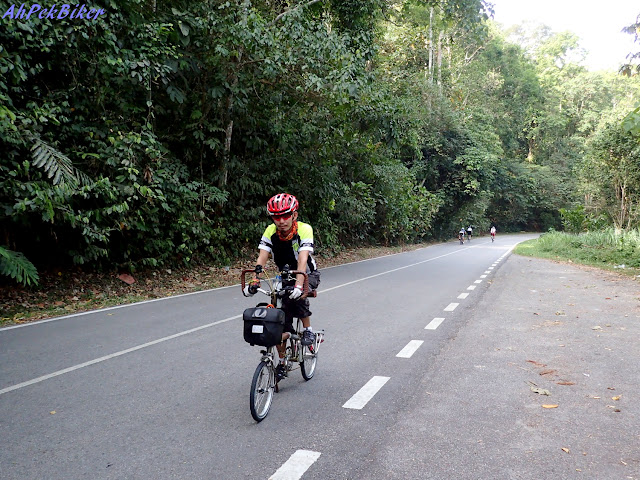 Warmed up, Felix was in top-form taking on the slopes easily ... 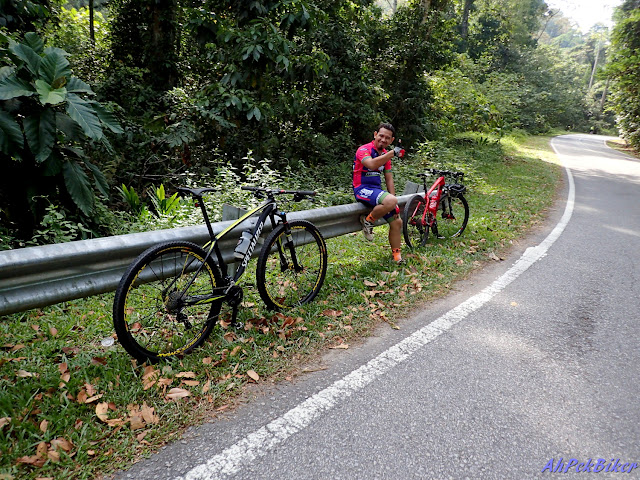 But others did not fare that well and we saw several riders stopping for rest; they were new to this route and under-estimated the difficulty of it. A bit of rest and they will feel good to continue on, after all it's a beautiful place surrounded by much greenery of secondary jungle. 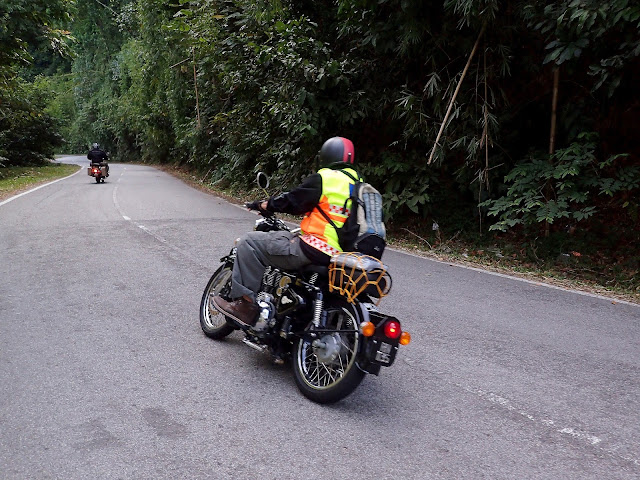 Cyclists were not the only ones who like this place, many motorcyclist with their big and super bikes love to ride here too - the sharp bends along the winding road gets the adrenaline pumping! 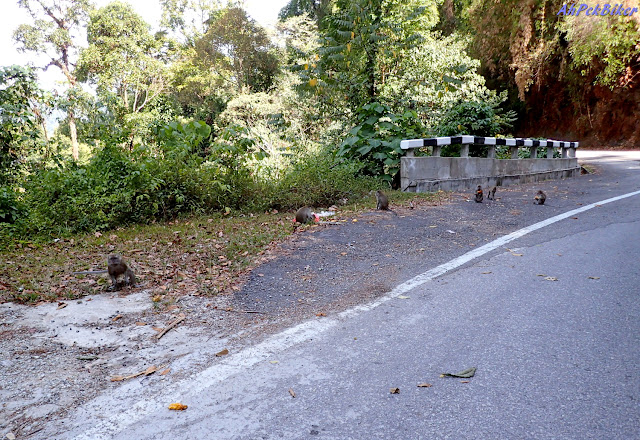 Don't be surprised to see many monkeys along the way, they are usually tame but do get aggresive at times so it's best to steer clear of them. 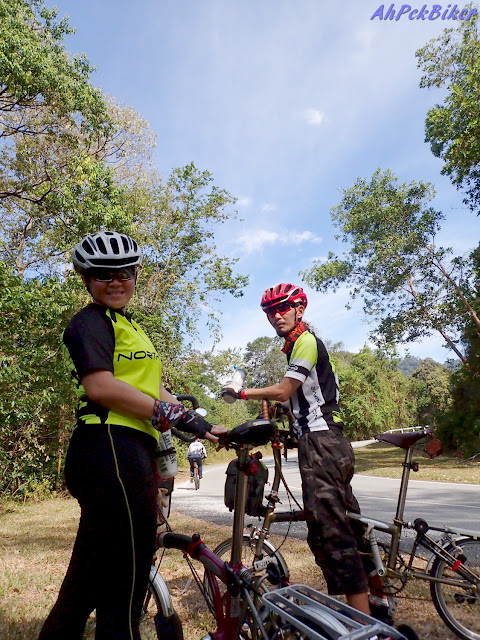 Finally, half-way up the climb, a short stop for a breather and to enjoy the scenery. 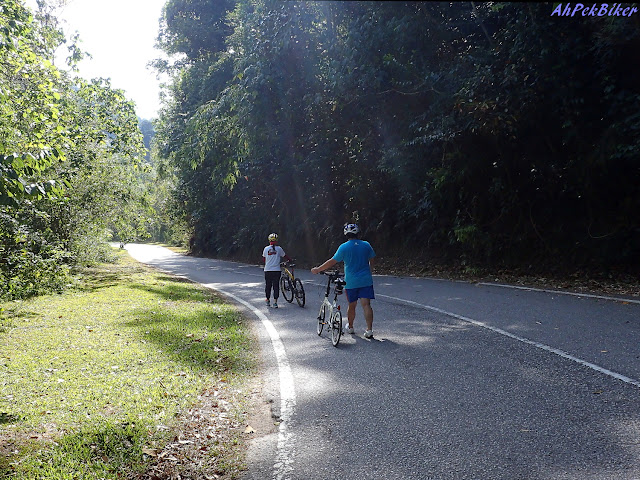 Rejunevated, we pressed onwards. Ahead some had come down to push, it was getting hotter and the heat had zapped them (probably like us they had started out late). In fact, we were not surprised to see many cyclists heading downslope, already on the return leg.
Out of the blues, I heard a shout "Hi AhPek!" from one of the riders coasting downhill ..... Heh! Heh! Seems like my reputation precedes me.... and with a quick wave I shouted a greeting back. 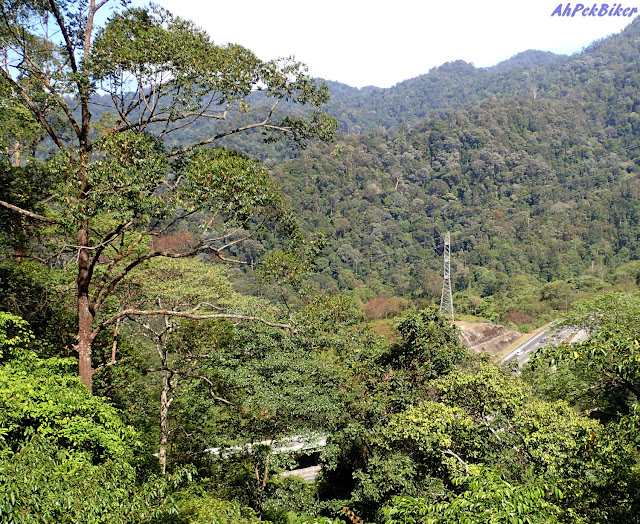 This old Gombak Road at times run quite high, at some stretches one can look down onto the Karak Highway. 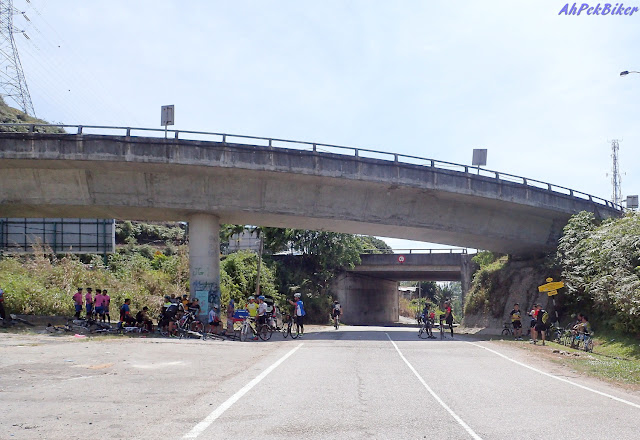 11:00am - We reached Genting Sempah. This is not the driving R&R, it's a point below the fly-over leading to the R&R. This is a watershed point for cyclists doing this route, the point where most will turn around after a brief rest and head back to the HOA.
Interestingly, this point also mark the border between Selangor and Pahang; beyond it will be Pahang. 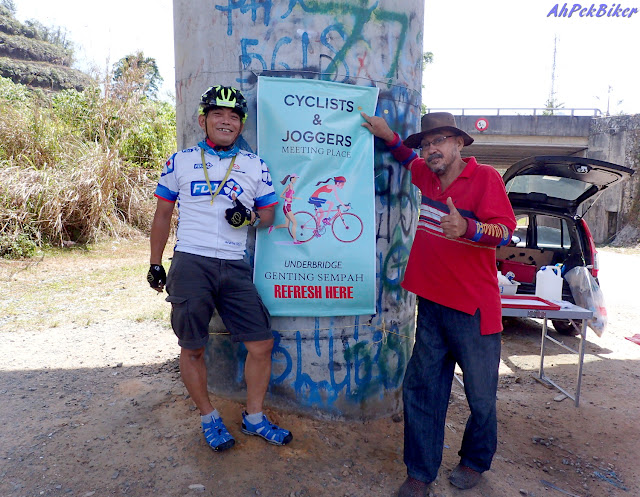 This guy has taken advantage of the location, setting up a small stall selling drinks and snacks to the cyclists. He has even put up posters to promote himself, calling the place "Underbridge Genting Sempah". Catchy name yah? 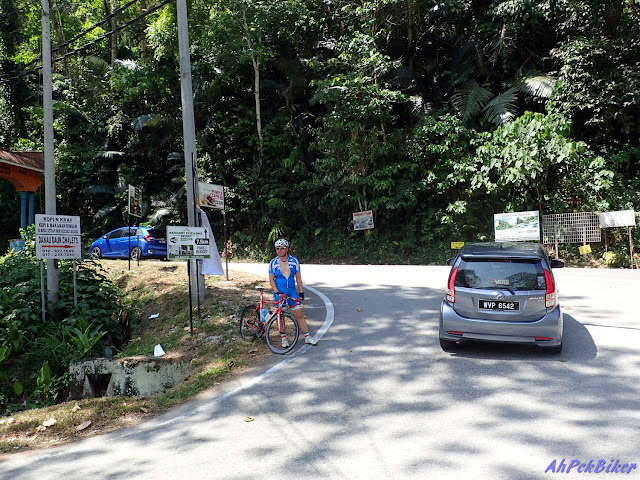 This was when Felix popped up with Surprise #2. "Let's head onwards to Bukit Tinggi!"
Bukit Tinggi is not far away, just another ten kilometres and it's rolling downhill.
BUT THEN.... the climb back in this hot weather 😨😨😨😰😰😰! 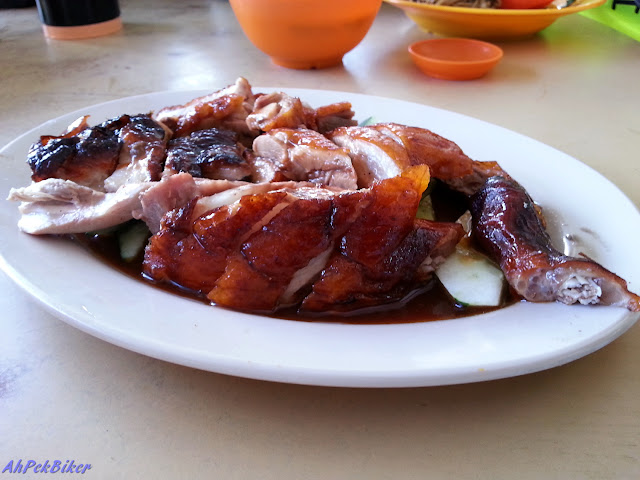 Nevermind, just take it in stride and there's a reward  there - very good roast duck and wantan mee at a shop called Restaurant Zheng Ji.
The duck was very good, tender meat with crispy skin. And the wantans here was super big, filled with lots of meat. 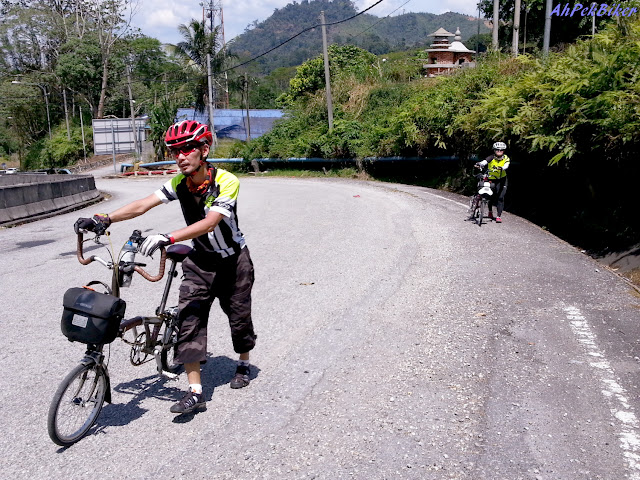 Now for the return leg. The ten kilometres slope back up to Genting Sempah (GS) was managable, that was until we hit the place called Hamburger Hill (so named as it's a short flyover loop next to the GS R&R where there is a McD burger outlet) which was rather steep. That coupled with the hot temperatures hitting closed to 40° really zapped us, and we did have to do some pushing here. 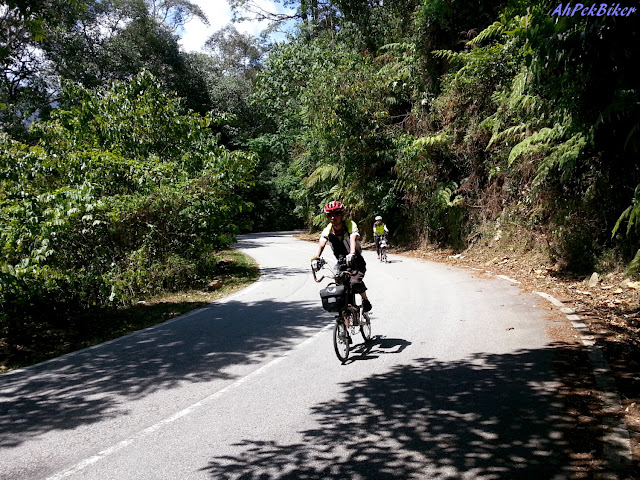 And after that it was coasting down the slopes back to the HOA and then some pedalling onwards back to Setiawangsa.
All in we had done over ninety kilometres, one which is normally okay but with the hot temperatures we were worn down. A cold shower would be good now 😅.

You are at - Jotaro's Blog / AhPek Biker / Cycling Malaysia / Kuala Lumpur-Selangor-Pahang / Cycling Genting Sempah & More!!
(comments most welcomed below. if you like this pls share via facebook or twitter)
Posted by Jotaro Zen at 9:53 PM