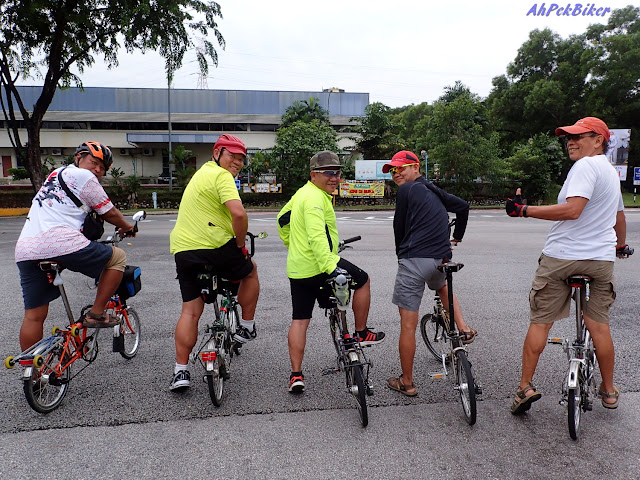 Route Recommendations :
1. The route, which is relatively flat, takes us through rural kampongs and some industrial area. The roads at the kampongs are quite well shaded. At the industrial area there are some shade but not much, so do cover up. We were quite fortunate, although this was during the hot season, a previous night rain and overcast skies made our ride cooler - much cooler as even near noon the temperature was just at 28°C. Just perfect for cycling!
2. Traffic at the kampong roads were light. At the industrial area there were hardly any traffic as it was a Sunday. We did meet heavy traffic at junctions crossing the main roads.
3. Points of Interest:
Generally there is no particular points of interest, the route itself is of interest as it cuts through quiet kampongs and skirts the Klang River at the southern end.
4. Food
- Breakfast was at a Shriyasz Curry House (GPS: 2.99242, 101.57416) in Putra Heights. They serve quite interesting roti canai and tosai variations.
- Brunch was at Restoran Wai Kwan (GPS: 3.05381, 101.59098) in USJ 6. There are a number of hawker stalls here, including a stall that sell chee cheong fun including Ipoh chee cheong fun & Teluk Anson chee cheong fun varieties. Another stall sell very good pau.

Who would have thought that the highly developed and busy areas of USJ Subang Jaya would be ideal to cycle along. In fact, I did not have good memories of cycling there as I was involved in a nasty accident there when my bike's tires went into a grating set in a wrong direction. Whoooomp.... I went flying and landed face first (.... see blog). Fortunately, my injuries were not serious and the following day I could attend the Vermeeer Charity Ride (the beauty queens who rode with us was the puller 😆).
Okay, I digress, let's get back to the ride. My impression of this locality changed when our buddy Jason took us on a ride around this area: one that hardly touched the developed parts, and one which took us on the quiter rural roads through calm villages!
Let's see how nice this place turned out to be.


Cycling Route - Wawasan Station USJ 19>Putra Heights>Bukit Lanchong>Alam Megah>Kg. Baru HICOM>Subang Hi-Tech Park>USJ 6>Wawasan Station USJ 19.
The route skirts and avoid the busy roads of the developed area and goes through rustic kampong roads. It passes by some industrial area too, it was a Sunday, so there were hardly any traffic there. 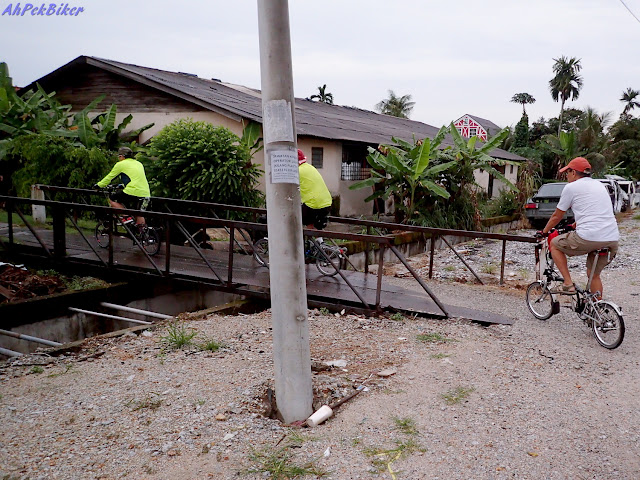 7:40am - Although we started from the built up area of USJ, with a short moment we were riding down a road along SS13 (SS - stands for Subang Sungai Way locality). The road separates newer residential area of USJ Subang Jaya (which was on the right) and the industrial area of Sungai Way on the other side.
My friends have recce'd this area well previously, and ten minutes onwards, we left the industrial ara and too a metal bridge to cross over to Kampong Kenangan. We would be passing many such villages, so many that I can't rightfull recall all their names; so this is going to be an interesting route! 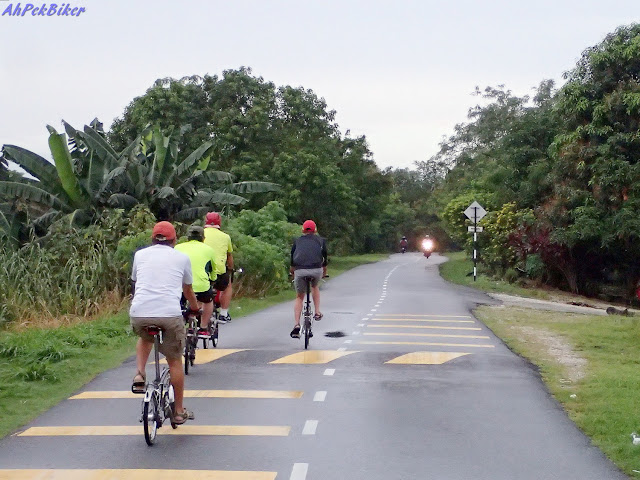 We rode pass several village houses of Kampong Kenangan, with me being awed that just a stone throw away from those busy high density residential area are pockets of calm, quiet rural life. AND ahead it got more interesting.... ahead was a quiet, long road that seem to run through an unpopulated area. The dense flora had hidden everything away. On the right were kampong houses and on the left, the Klang River. Our route would make a U-shaped loop that skirts the river, but unfortunately we did not get to see the river... perhaps the next round we would explore some more. 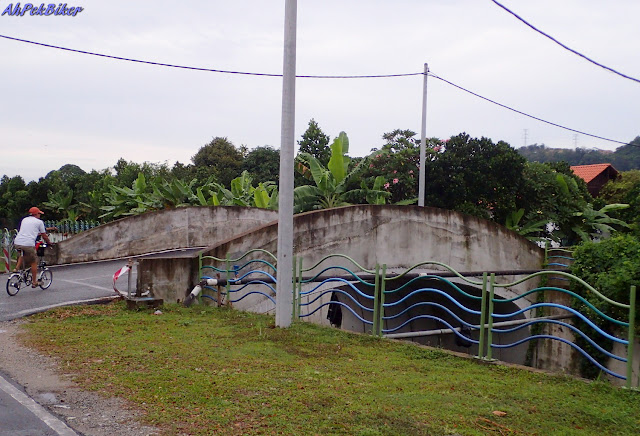 In front we took a left across a bridge spanning one of many irrigation canals of this area.... 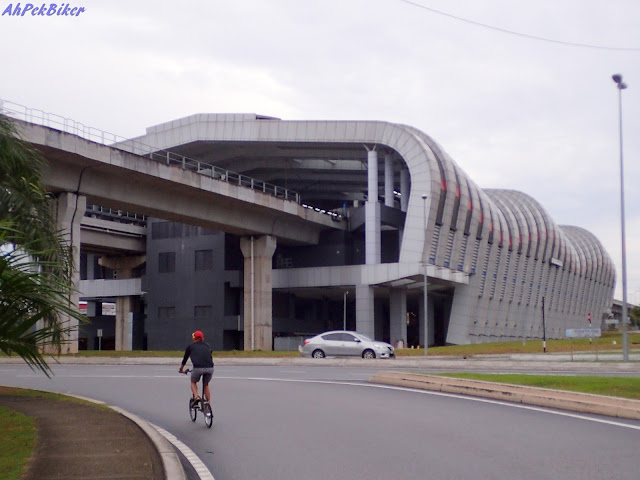 ... and Waaaala! We leave the kampong scene and are back at a built-up area, passing by the huge Putera Heights MRT Station which loomed overhead and seemed to dwarf Jason who was riding ahead. We are taking a short detour into Putra Heights for breakfast. 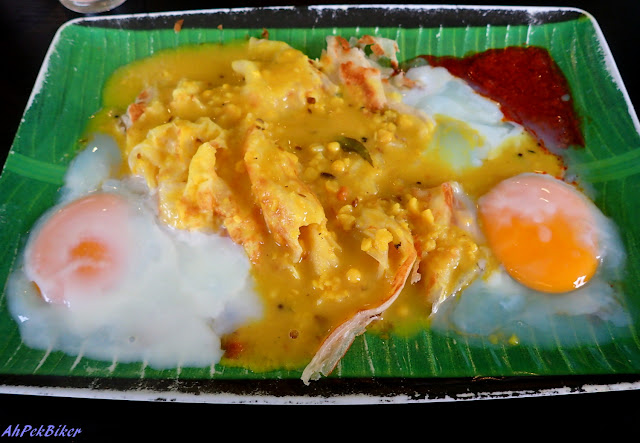 Shriyasz Curry House like many newer mamak outlets trying to meet the challenges of today's younger gastronomic palate, have come out with some innovative creations on their menu; creations which reminded me of the Roti Doll I had in Alor Star.
I had this Roti Float which consitted of a shredded plain roti canai floating on some dhal curry and on each sides were two perfectly done half-boiled eggs. It was very good with the soft roti layers soaking up the lightly spiced dhal. The combo simplified my meal - I usually order half-boiled eggs separately from the roti; here my meal is an easy two-in-one..... Slurp 😋😋😋! 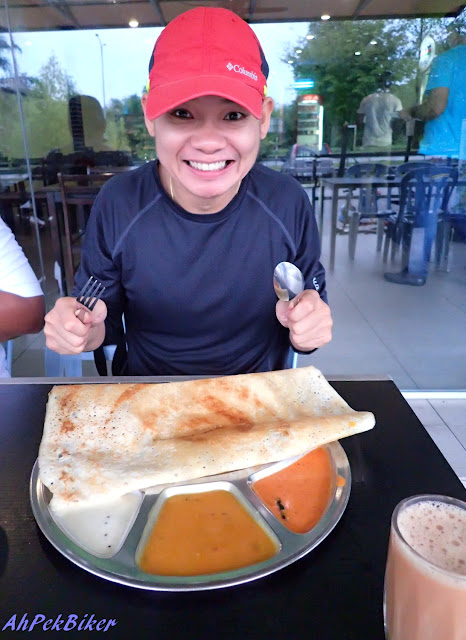 Jason went for another innovative dish - Ghee Tosai!
This is one dish good for the health concious as ghee is a much healthier alternative to butter or margarine.
By the way, on the left corner is my cup of Ginger Milk Tea (Teh Halia); Shriyasz Curry House has one of the best, with the tea being thick and the ginger flavour strong but not overpowering. 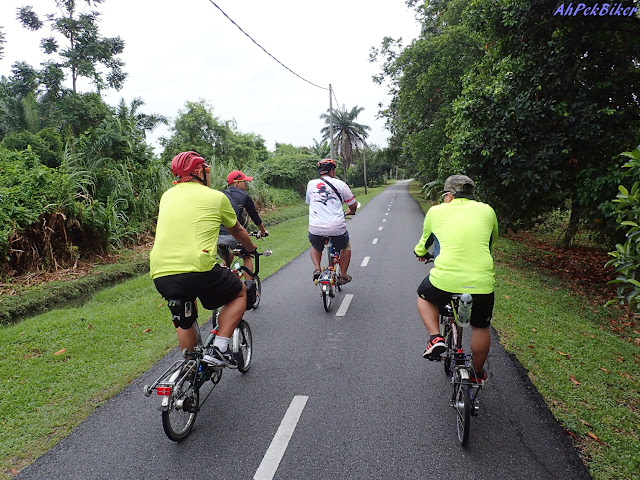 Tummies filled and with a short ride we were back on that rustic road that runs parallel to the Klang River. It is interesting how a river can divide different communities; on this side things were all rural and quiet. On the other side was the busy township of Kota Kemuning.
My buddies had earlier tried to find a pedestrian bridge that would be a short-cut way into Kota Kemuning, but there was none. To get over there, one would have to ride out to the Kesas Highway and use the motorcycle lanes there. I think the locals probably want it this way, otherwise the place will lose it's rustic charm. 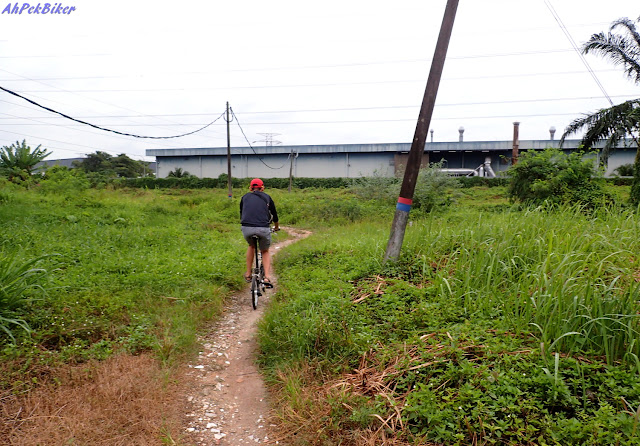 A bit of off-road adventure here, along a narrow earth path that would lead us out from Bukit Lanchong. We could see some factories nearby, these are the ones at the rear section of Taman Alam Megah. But we won't be heading there... 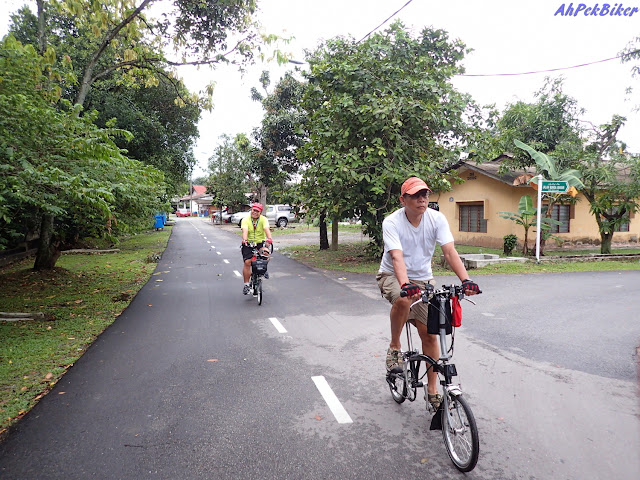 ... but instead cut across to another quite kampong called Lancong Jaya. These days the kampong houses are mostly built in concrete and bricks, but there are still a few wooden houses around. 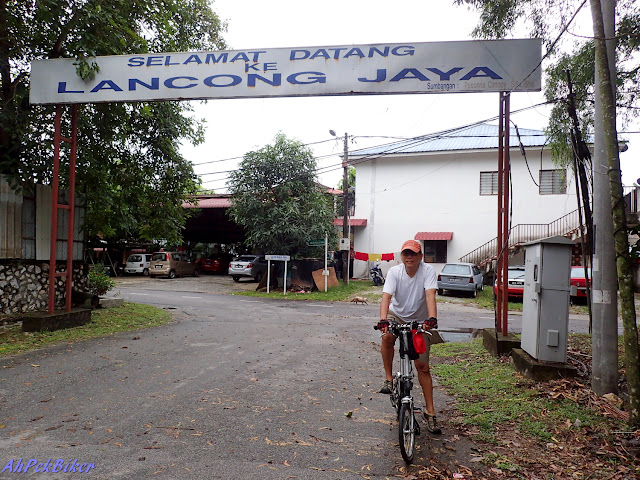 Yup... we are at Lancong Jaya. At the back is one of the wooden houses right next to a huge brick house. I do hope that more of the timber houses will be conserved so that this village will still retain it's old world charm. 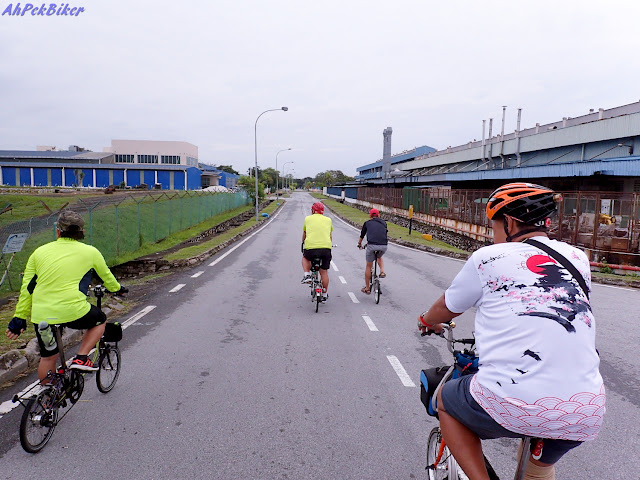 We rode pass the fringe of Taman Alam Megah and the were into an industrial area, the Shah Alam Premier Industrial Park. It was a Sunday and most of the factories were quiet and the roads almost devoid of traffic. Yippeeeee! 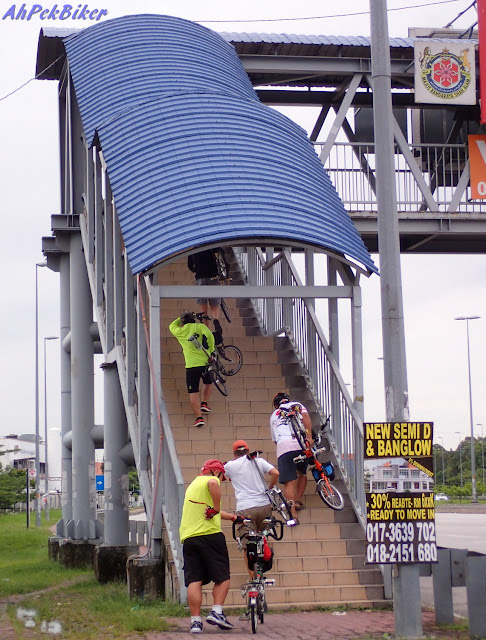 We hit the Shah Alam Expressway (which forms part of the South Klang Valley Expressway).... now how are we going to get across this very busy highway. Use a pedestrian bridge!
Here we are carrying our Brompton bicycles up, across and then down the other side... safely. 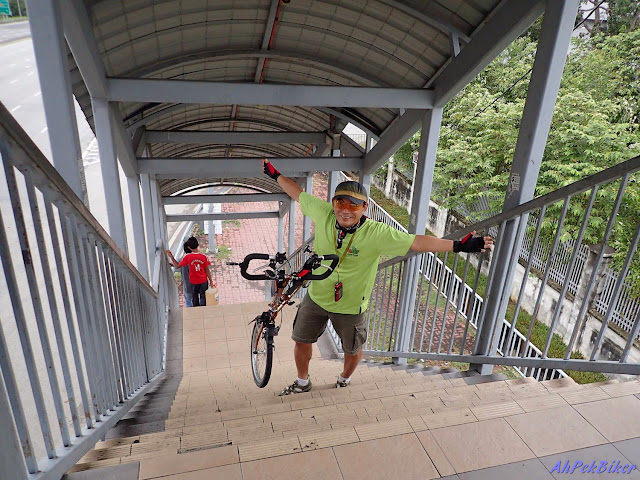 A tip here on easy carrying of the Brompton bicycles - hook the seat over your shoulder, at the soft muscle part midway between the neck and the upper arm (not on the collar bone!). Carried this way, the bike perfectly balances on the shoulder.....
See "No Hands! 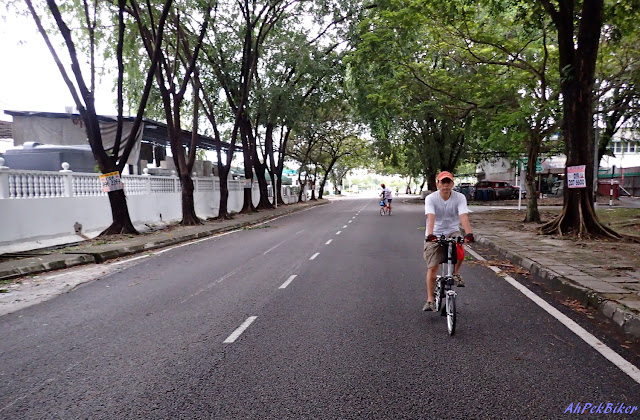 The bridge took us over to the HICOM Industrial Park .... again a quiet and nice place to ride on with some stretches nicely shaded. 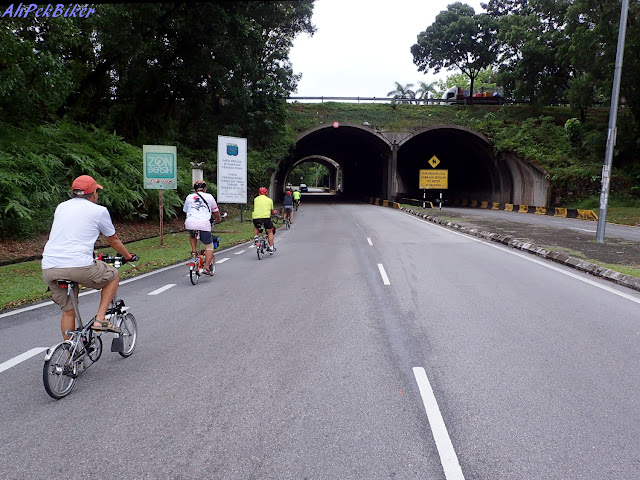 Another interesting feature along the way, double round tunnels running below Elite Highway. These tunnels will take us back to the Subang locality. Over on the other side is the Subang Hi-Tech Industrial Park.
Our ride was one that was casual and easy along a safe, quiet route. Only on incident marred this - at the junction of Persiaran Tujuan and Persiaran Perpaduan (in USJ), some selfish drivers sped up from behind and honked at us, refusing to give way even though we gave clear hand signals. 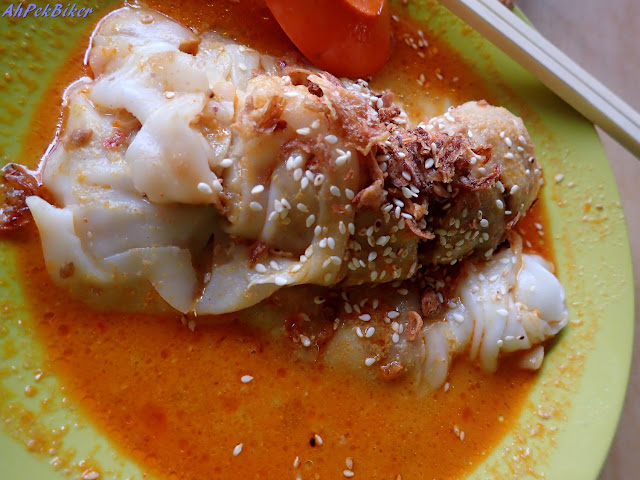 Time for eats again, time for brunch at Restoran Wai Kwan. This is a coffee-shop with many hawker stalls; we opted for something light, Chee Cheong Fun (CCF). A stall here also sells a variety of CCF including Ipoh-style CCF. I had this Teluk Anson CCF but drenched in curry; guess I still miss the Roti Float from earlier on. 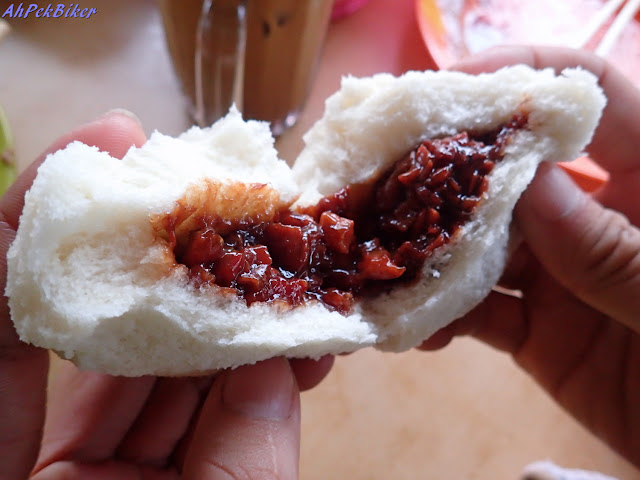 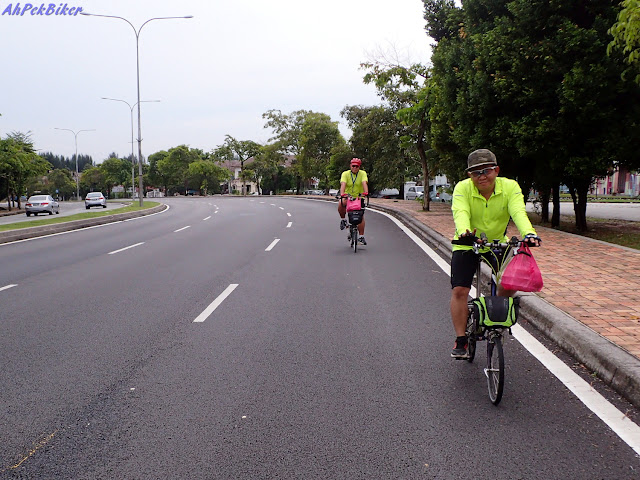 The pau were so good we pack take-away to take back for loved ones back home (have to score Brownie Points, yah?). 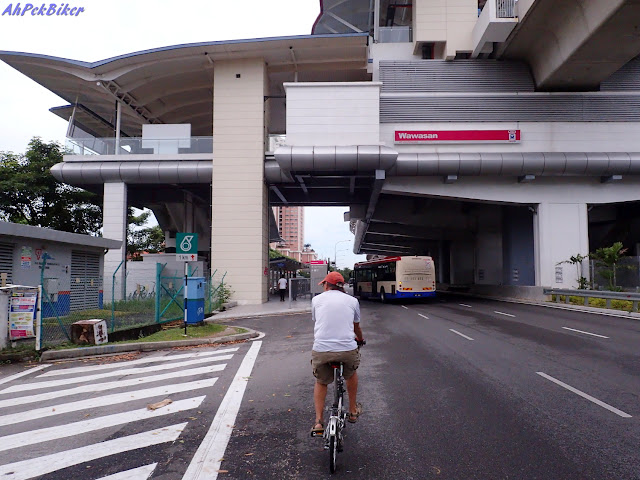 11:35 am - We are back at the Wawasan Station, our cars were parked at a car-park just slightly in front.
Many thanks to Jason for a nice morning ride, and to our other buddies for your very good company.

You are at - Jotaro's Blog / AhPek Biker / Cycling Malaysia / Selangor / USJ19 Wawasan To Bukit Lanchong Rural Loop
(comments most welcomed below. if you like this pls share via facebook or twitter)
Posted by Jotaro Zen at 1:26 AM