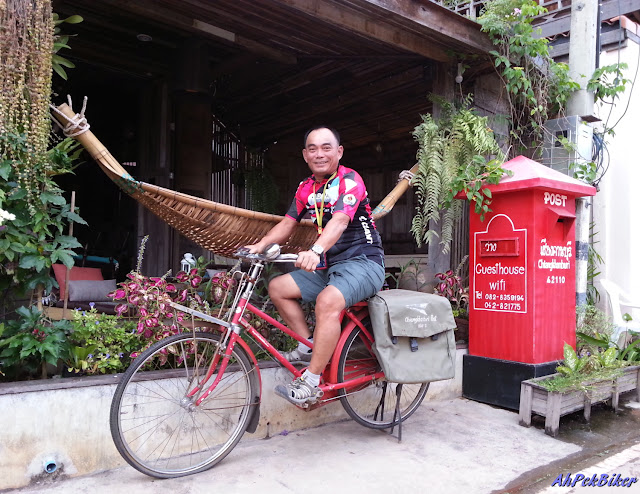 1. Traffic Directions & Ride Conditions
- Thailand is right-hand drive so ride on the left side of the road. The highway from Loei to Chiang Khan has dragon-backs with heavy traffic but there are emergency lanes to cycle on. To avoid this we took a truck until a point about 20km away and started cycling along rural roads which had much lighter traffic. Approaching Chiang Khan town were some dedicated cycling lanes.
- The route was relatively flat with temperature averaging 23ºC.

8. Weather
November and December are good months to ride in Isan and Laos as the weather is quite cooling and the possibility of rain is low. Early morning temperatures is between 18 to 20°C, mid morning between around 22 °C and afternoons 26-28°C. 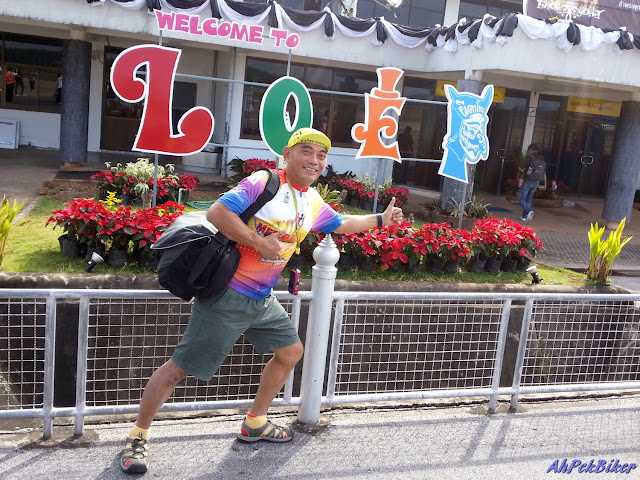 The previous day we had taken a Nok Air flight from Bangkok to Loei and had cycled around the town while waiting for other friends to arrive. We stayed a night in Loei. 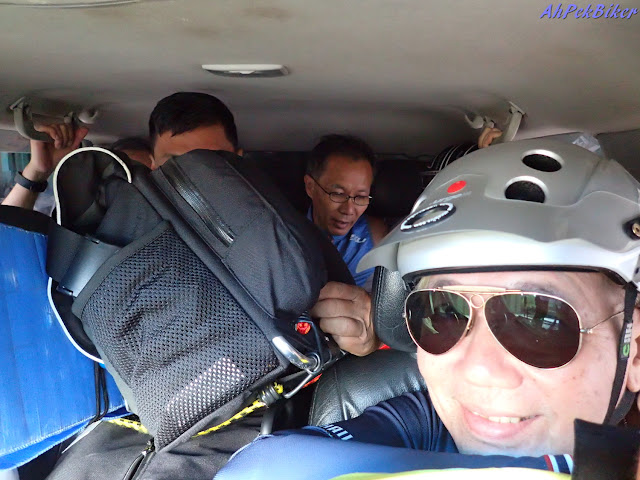 Today we head for Chiang Khan, but it was not cycling all the way. Huat who had cycled the route before advised skipping cycling on the stretch of Highway Route #201 which was a monotonous route. We rented a pick-up truck but when it came it had a limited covered rear but somehow we managed to fit our bikes in but not all our luggage. The six of us together with some luggage squeezed into the cab, with four at the rear seats and two at the front (together with the driver). Packed like sardines Yah! 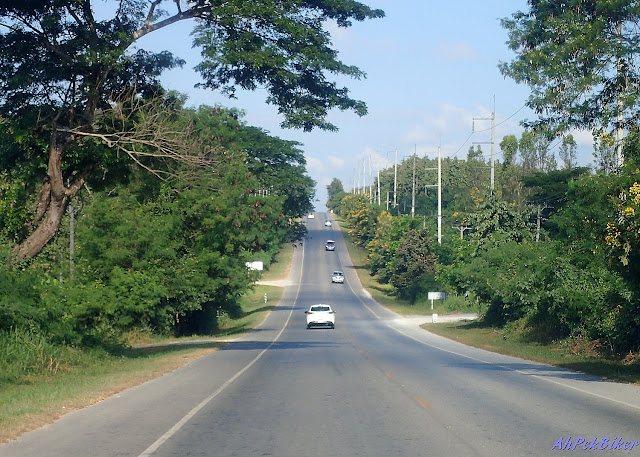 Driving along the highway and seeing the straight stretches with monotonous undulating dragon-back, we could understand Huat's decision to skip cycling on this stretch. 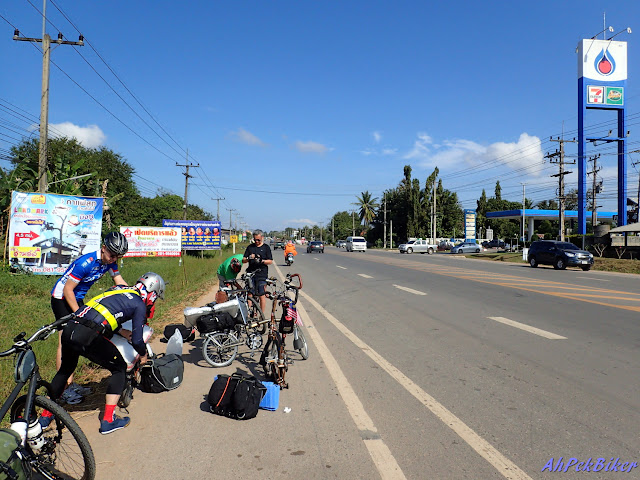 The truck dropped us off at the roadside near the e where we unfolded our quickly bikes and were ready to start cycling. On the opposite side was a large R&R. Our cycling route will start from that side. 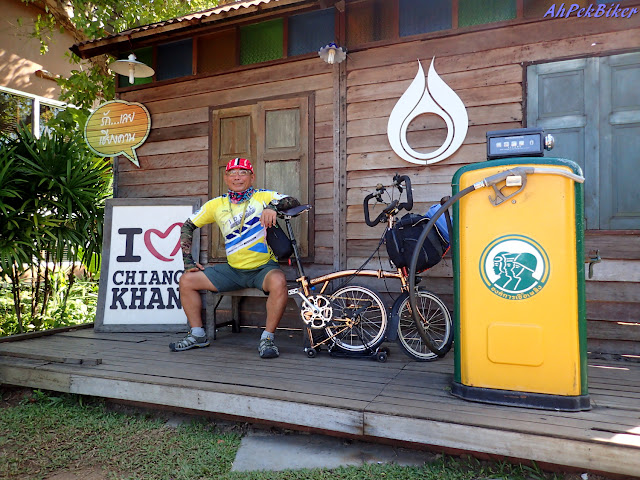 But first let's look cool at the R&R. This was a nice place to stop, it's fairly large with good toilet facilities and a big 7-11 shop.


We headed down Route 201 and made a left turn just opposite the Sam Duang Restaurant (ร้านอาหารสามดวง). Going down this road for about two kilometre we hit a junction and made a right turn. Hey! Aren't we suppose to turn left? But Huat had some plans.... we are going strawberry hunting down this road. Unfortunately, most of the strawberry farms here were closed... meaning no strawberries as probably this is not the right season yet 😞.
Nevertheless it was great to ride on these rustic roads and see the rural life here. And this road could possibly be part of a safe cycling route from Loei. 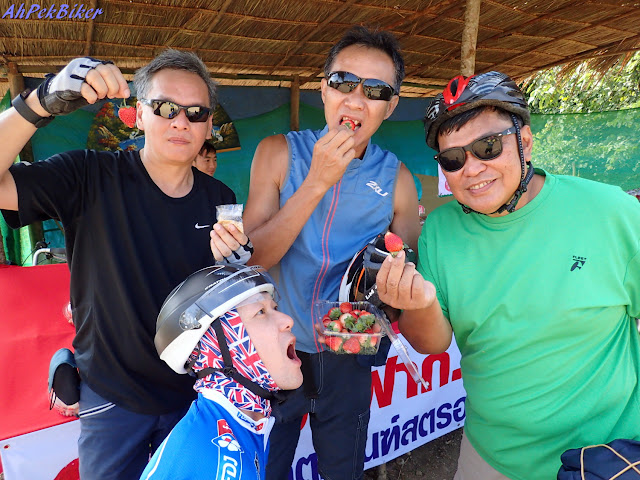 After a kilometre down and no strawberries, we made a U-turn. Hitting Route 211, we made a right and were pleasantly surprised to find a strawberry farm with a shop up front that was opened. 😋 Yahoo!
Here we are enjoying our strawberries like it was the first time eating them. The strawberries are eaten with a touch of plum salt (see the packet Huat is holding). Other than fresh strawberries this place also sell strawberry juice, jam, etc. 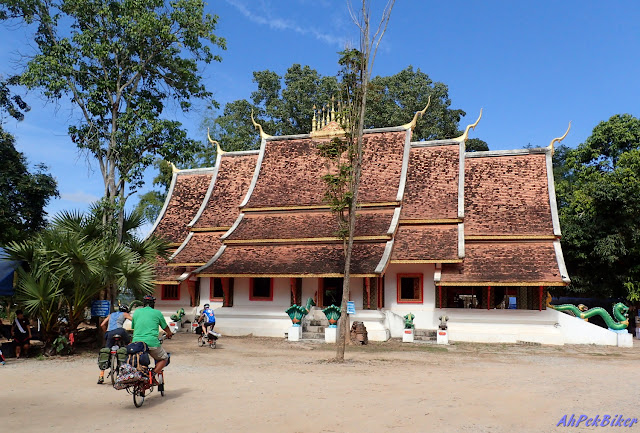 Our next stop along this road was the Wat Tha Khaek. This is an ancient temple and is one of the most revered Buddhist temples in this area. Located some two kilometers from Chiang Khan, the highlights are three sandstone Buddha images that are estimated to age over 300 hundred years old. Here the temples have some Laotian influence, i.e. the assemble of decoration at the centre of the roof ridge; we were to learn the meaning of this later on when we were in Laos. 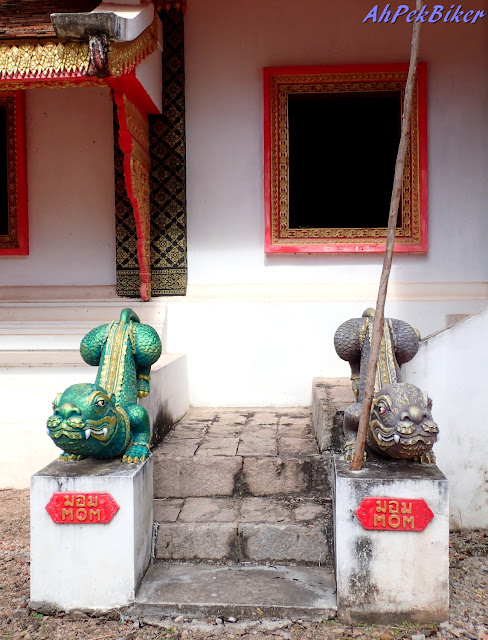 It was a nice temple with nice decorative red colour doors and window. I was most intrigued by these two statues of some lizard; seldom see these in Thai temples, I wonder what they represent.


It was a nice temple, but of more personal significance to us was that this place was where we had our first view of the Mekong River during our tour. On the opposite banks is Laos! So near yet so far. 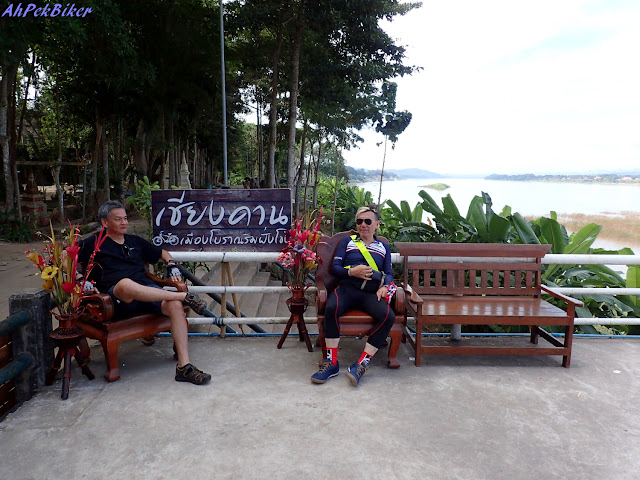 Along this stretch we made several stops, each with it's own ambience. The temple stop was enlightening; then further down was a cafe with a great riverside view. Here it was a relaxed and quiet atmosphere, just sitting and sipping coffee while soaking in the vibes of the place. 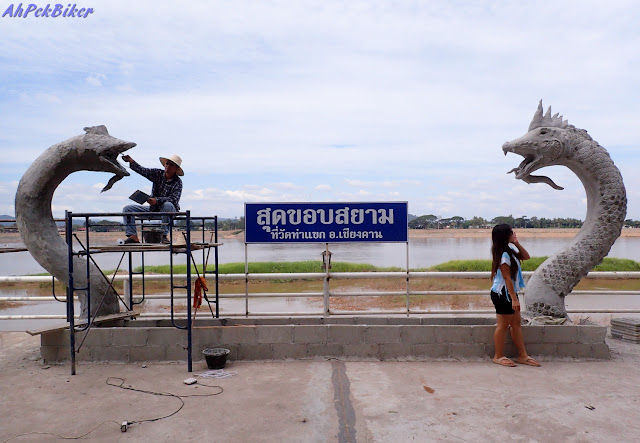 At this platform a couple of Naga statues were being constructed... guess this place won't be so quiet anymore in the near future. 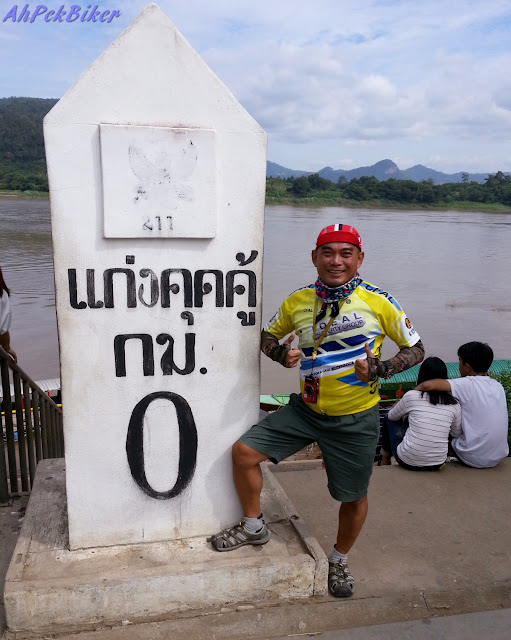 Our third stop was at Kaeng Khut Khu, a not so quiet and rather busy, touristy R&R. There is a huge milestone here with the number Zero. This represents milestone Zero of Route 211. The actual location of milestone Zero is along Route 211 further away from the river (which we will get to see the next day); nevertheless this one makes for a great photo opportunity. 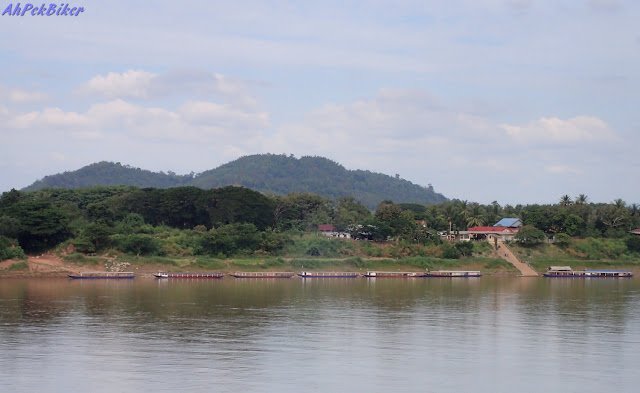 Here too we get to see a better view of the Laos side; there is a jetty with passenger long boats there and I think these are for passengers crossing from here to there. 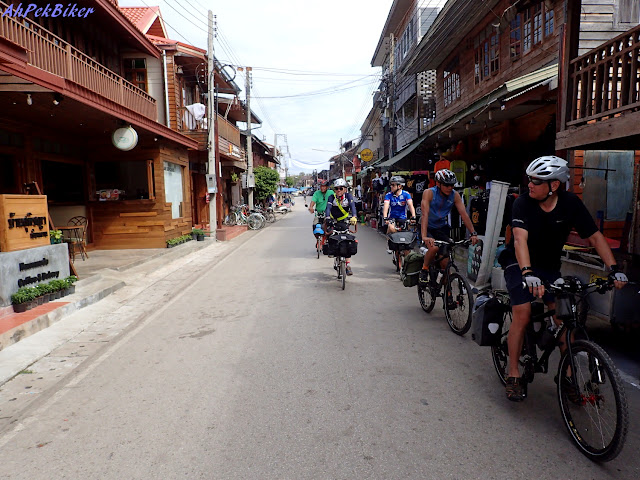 1:00pm - We reach Chiang Khan's main street (Chai Khong Road) and are taken in by the rows of timber houses here. The roads here are almost devoid of motorised traffic and narrow... 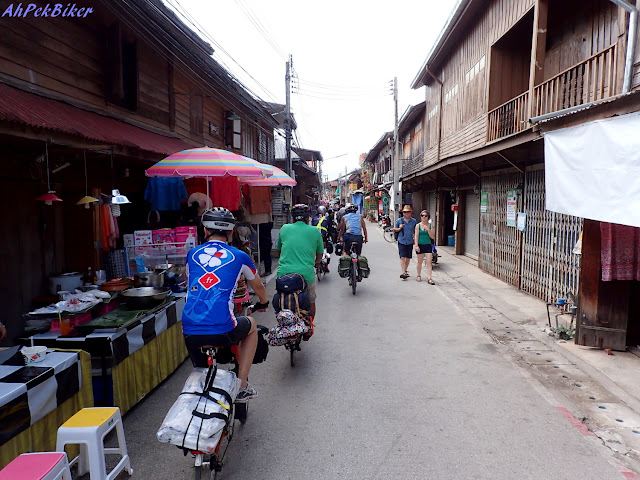 ... as we got further in, the road got narrower and even more quaint. 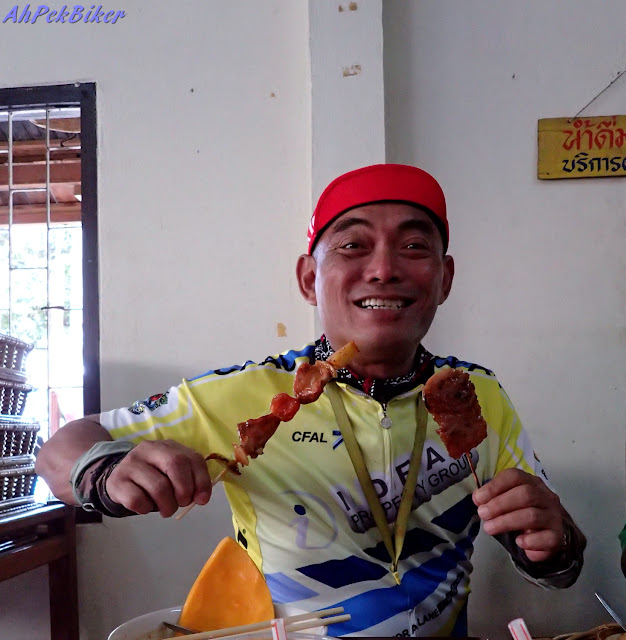 A stop for lunch at a shop next to Wat?. They serve very good noodle soup and pork broth, in fact their noodles are so special that they do sell packed dried versions of it.
Other than the noodles we also got take-away Mu Ping & Ki-ping from a stall in front of the temple, these were very good and cheap at THB10 per stick. 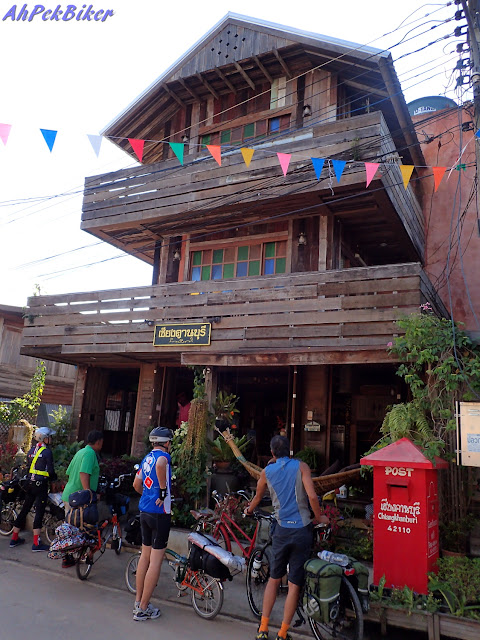 This was our stay for the night, the Chiangkhanburi Hotel, a quaint timber one with large padlocks for its timber bedroom doors. The ground floor was very cosy with old decorative items and a snug rattan hammock to swing from.

IT'S TIME TO EXPLORE CHIANG KHAN AND TAKE IN ITS CHARM! 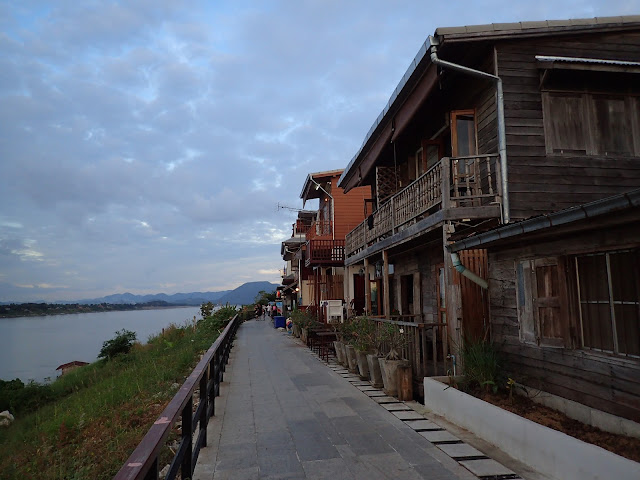 Chiang Khan has a great riverside walkway that runs parallel to Chai Khong Road, and it's all for pedestrians and bicycles only! No pollution by motorised vehicles. Endearing timber houses face the Mekong, most of these are home-stays, while some are, restaurants, cafes and drinking holes. In the setting sun, they look even more warm and charming. 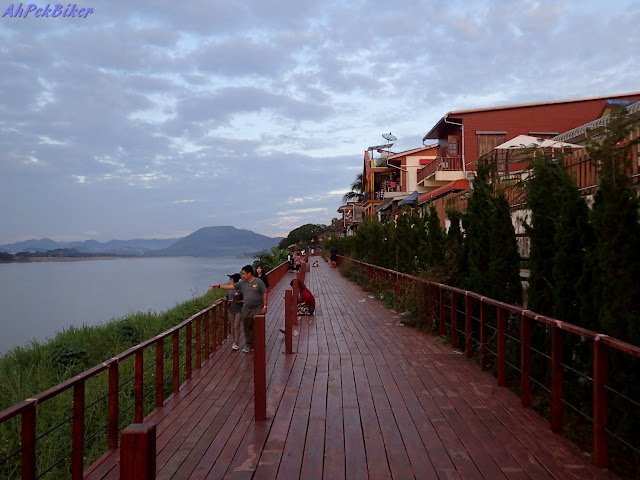 At a lower level are even cosier boardwalks... 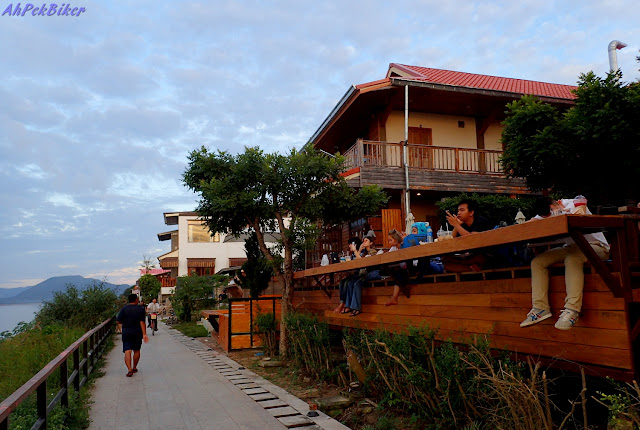 An enterprising cafe had even put a counter for guests to sit at while facing the river and take in the ... 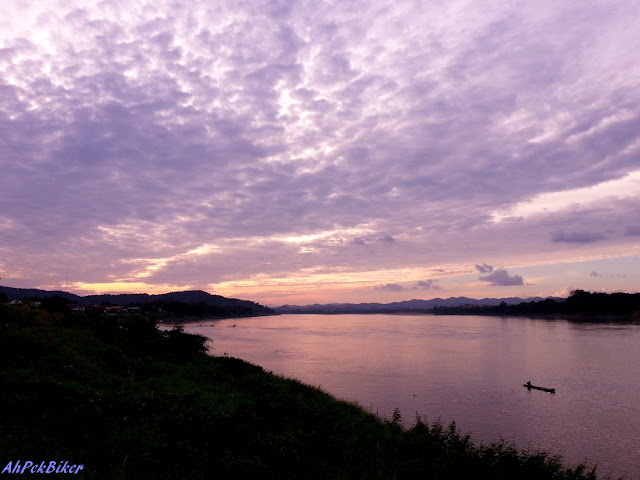 ... the glorious sunset, one that is calm with fishing boats spotting the river every once in a while ... 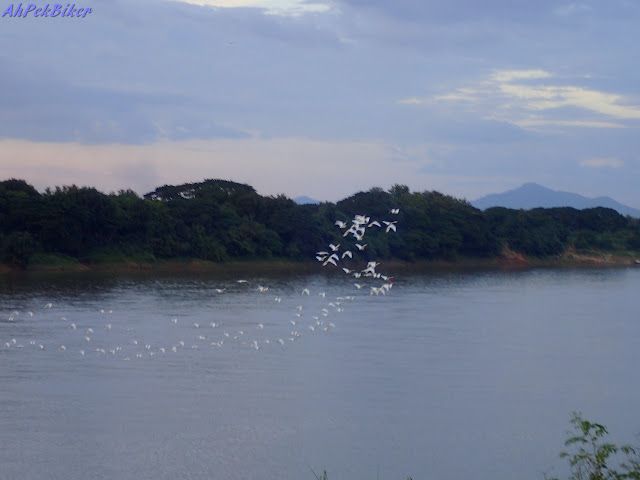 ... and a flurry of activity as white birds scoop down to the river and the soar skywards again! 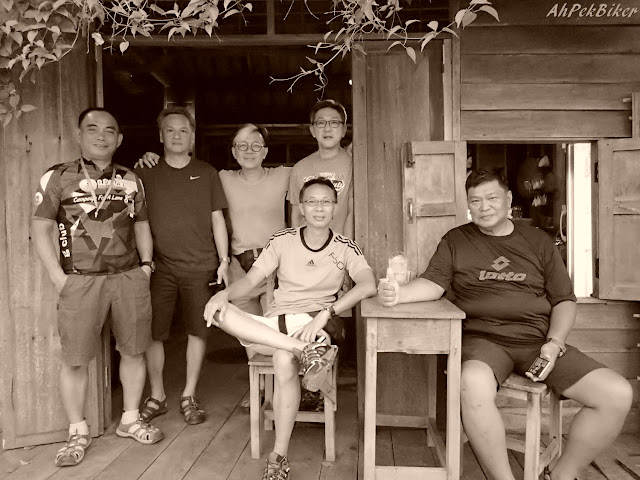 Reluctantly we pull ourselves away from the river scenes; at a far end we took this photo at one of the timber houses. Rendered in black and white, it made us fit into the place so well, like old-timers longing for old times. 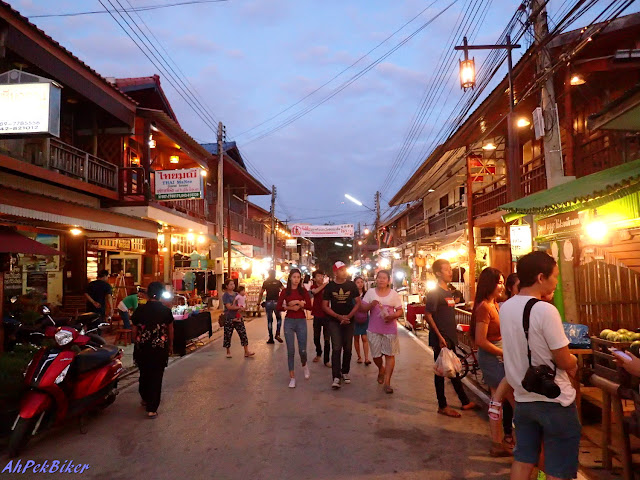 5:30pm - The sun was setting and main street began to turn into a flurry of activity as stalls started opening with their bright incandescent lights adding to the old-world charm of Chiang Khan. Quiet shops became more busy, and many stalls lined the roadside. This is the daily night market, it's a street market that stretches almost the full length of Chai Khong Road. There were all kind of shops and stalls, some selling handicrafts of the local cottage industry, and even more were selling interesting and exotic local food. 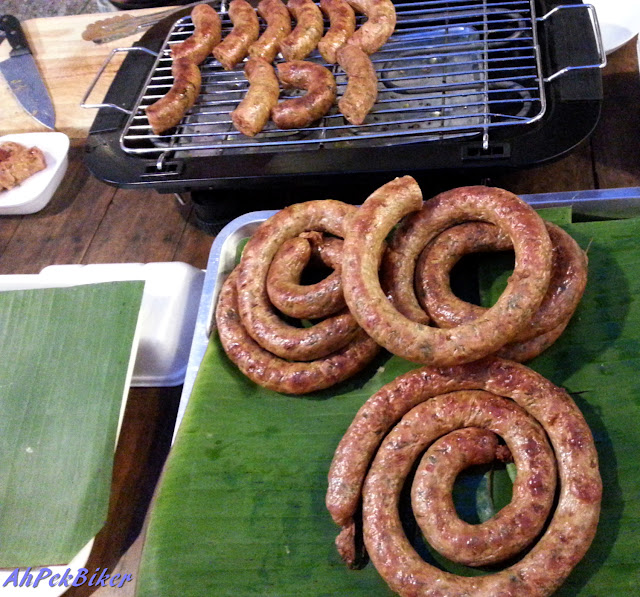 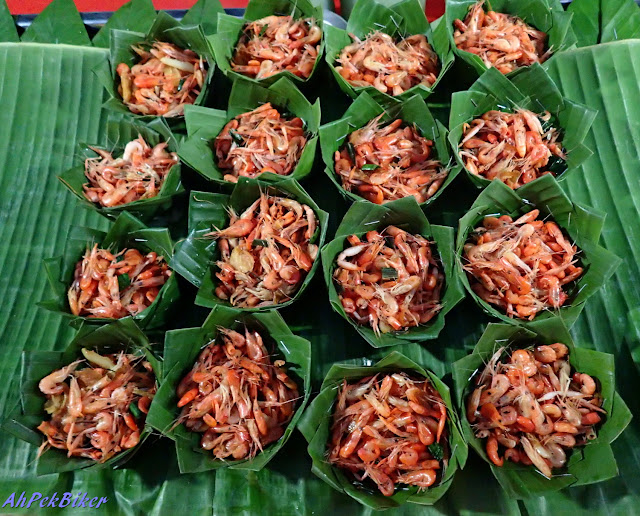 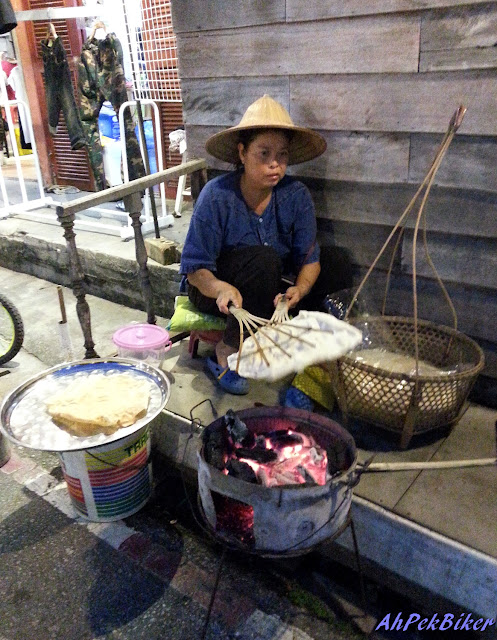 A local lady, tucked into a snug corner at one of the even narrower side streets, preparing a local treat over a charcoal fire. It's some kind of pancake-waffle, crunchy and with a bit of prawnish taste. 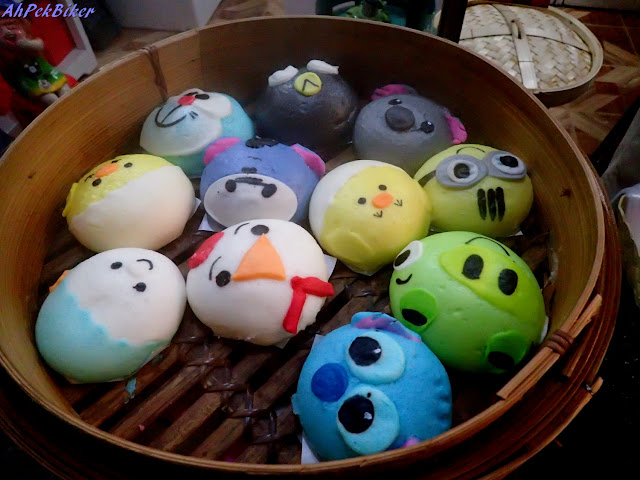 And for the younger ones (including AhPeks who are young at heart - like jolly ol' me!) steamed Bao dumplings made in the shape of colourful Pokemon and other cartoon characters. 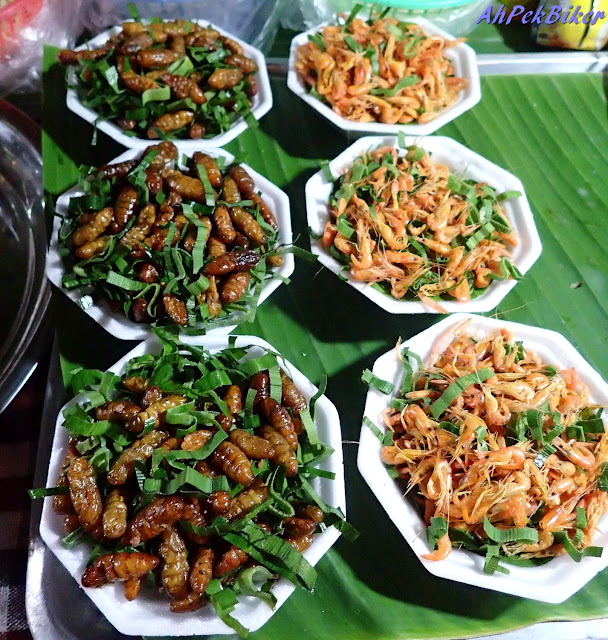 For the more daring - deep fried grubs... before you say Yikes! try some; I did and found them to have a crunchy surface and juicy inside. 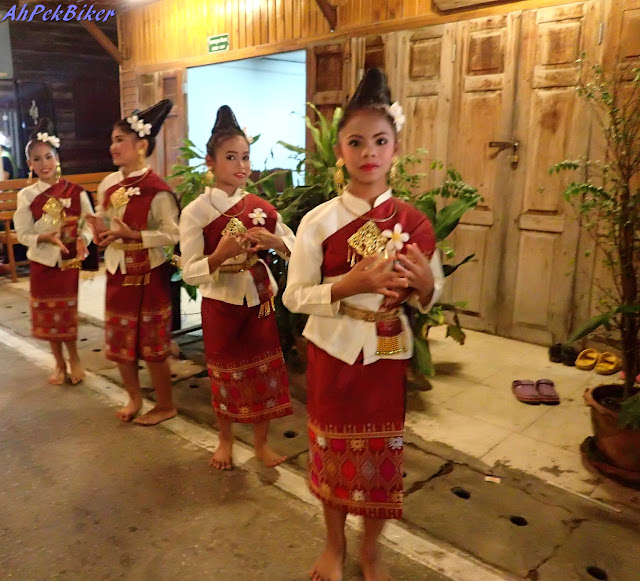 Every now & then there were also cultural performances on the street itself; these were dances performed by young boys and girls dressed in pretty Thai costumes.

KHOP KHUN KHAP CHIANG KHAN!
You will remain one of my favourite places in the world!