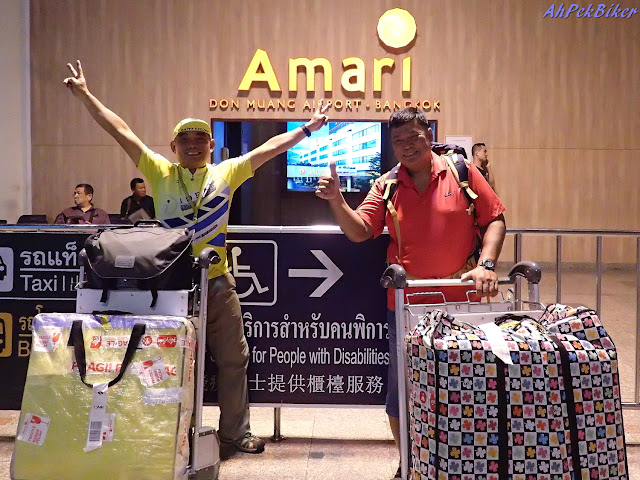 1. Traffic Directions!
Thailand is right-hand drive so ride on the left side of the road. Bangkok's main roads have heavy fast moving traffic, so do cycle with care.

2. Bringing Bikes Onto Planes
Air Asia: their is a need to purchase sports equipment baggage to check in bicycles into the plan. Although our bicycles were lighter, we booked higher weight-age of 25kg per pax to allow for packing weight and also for stuffing in additional stuff bought at destinations (we were after all tourists too). Please note that bicycles (foldies or full-sized ones) have to be properly packed. Click here for a listing of their charges, prices may vary depending on origin and destination, local flights or international flights.

3. Communicating with Locals
For the uninitiated cycling in foreign lands can be a daunting experience, especially when one can only speak a smattering of the local language or if there is no common language to speak to each other (like English). Most Thai can hardly speak English, and learning some basic phrases will be helpful.
This could be partly overcome by using translation apps like Google Translate. Do install this app into your phone and before you leave on your tour do some basic translation as it will be saved onto a list of recent translations.
And do install memory-resident translation apps into your mobile phone.
In Thailand, doctors and pharmacists speak relatively good English. Seek out clinics or pharmacies for help when necessary. A friend who regular tours the country even carried flash cards of crucial personal and medical details printed in Thai, basic daily terms, etc.

4. Staying in Connected
When travelling in a group it's important to be able to communicate with each other, especially if one got lost or just to share photos and moments.
We arrived at the Don Muang International Airport and bought pre-paid SIM cards from a TrueMove Mobile stall located at the arrival hall. High speed 4G packages with 1.5GB data for can be obtained for THB350; beyond usage of 1.5GB it still works but at a slower speed. Click here to view other TrueMove pre-paid sim packages. If not familiar, get a staff to set up your phone for their system for it to work properly.

6. Currency Exhcange
For better exchange rates, get your Thai Bahts before leaving before leaving Malaysia. Also at certain towns, it may not be possible to change the Malaysian Ringgit to Thai Bahts.

7. Accomodations
Our accommodations for two nights at Bangkok was at the V.Resotel Hotel (GPS: 13.8718, 100.4808) in Nonthaburi, a twin-sharing room for THB1,900 per night. Wifi is include but the speed was not as fast as our phone 4G data.

9. Weather
November and December are good months to ride in Isan and Laos as the weather is quite cooling and the possibility of rain is low. Early morning temperatures is between , mid morning between around 22 °C and afternoons 26-28°C.

10. Navigation
Where data signal is available and strong, one can use Google Maps to navigate around. If the cycling options may not be available, just use the walking options.
In cases where data signal is weak or unavailable (like in remote rural areas), install MAP.ME into your phone. It's an off-line map app.
Alternatively, use a dedicated GPS unit like those from Garmin. However ensure that one install the Thailand and Laos maps into the unit. 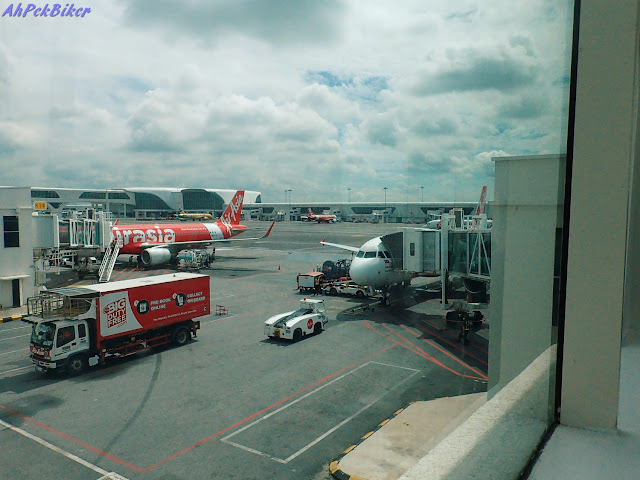 Chew and me will be flying to Thailand to rendezvous with some friends there for a cycling tour of Isan Thailand. It will be Chew's first overseas cycling tour trip.
The sky seems moody as we arrived at KLIA2 for our 11:45am flight to Bangkok. But the dark clouds did not dampen Chew's spirit, he was looking forward to some good, learning experiences in bike-packing by air. We checked in and had to take our bagged bikes (both Bromptons) to the over-sized luggage to check them in.
Let's hope the weather in Thailand will be better and that their will be no rain to hinder our cycling tour - *keeping fingers crossed". 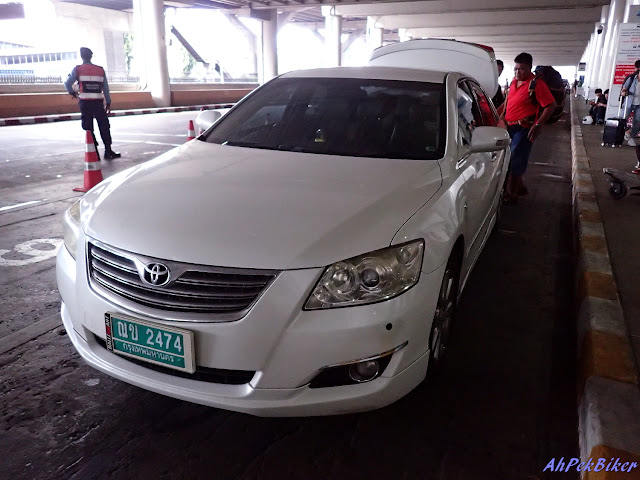 12:50pm (Thai time, which is one hour after Malaysian time) - After a two-hour flight we landed at Don Maung International Airport; first thing to do after clearing immigration and customs was to get pre-paid Thai Sim cards to stay connected with friends and loved ones. Just after exiting, there is a TrueMove Mobile stall, from there we got our Sim cards. There were several offers on and we took one that provided 3.5GB data for a month.
Next to the mobile stall was a tourist agency stall, and a man canvassed us to take their taxi to head for hotel at Nonthaburi stating that their taxi at THB700 where cheaper than those offered by the regular taxi stalls. Believing him, we took theirs only to find out later that regular taxis charges around THB250. But I think he was not lying (Thais are honest people), he was telling a half-truth, the taxi they provide - a Toyota Camry - would probably be termed a limousine taxi and they had a porter carry our luggage to the car. Well what is done is done, might as well enjoy the upgraded service.
TIP: I had forgotten about Huat's advice of getting taxi at Level 3 (the Departure Hall), seem taxis who have sent passengers to the airport will pick up arriving passengers at a much cheaper price. 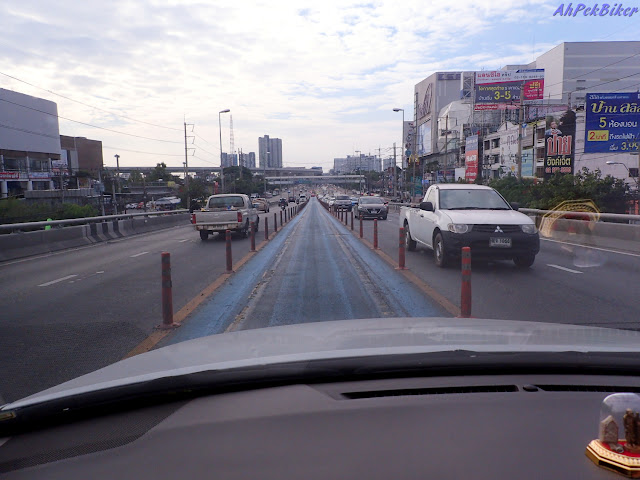 Our "limo-taxi" sped off, but did not seem to take the shorter direct route and instead took a longer loop. It also went along a blue lane at the centre of highways. At first I had thought that these blue lanes were dedicated lanes for public transport, but no they are actually contra-lanes with traffic flowing in a direction that will ease traffic flow depending on the time of the day. 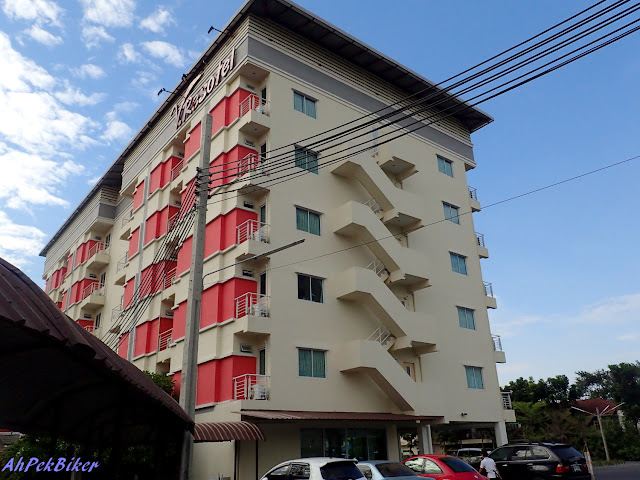 3:40pm - Arrived at our hotel, the V.Resotel Hotel located at Nonthaburi. We shared a room for two nights at a price of THB1,900 per night.

Cycling Route - V.Resotel>Central Plaza Rattanathibet>Maha Chesadabodindranusorn Bridge>V.Resotel.
Distance: 10.9km          |         Level: Easy
This was a simple, casual ride and actually our first time cycling in Bangkok! It takes us on a short loop around the Nonthaburi district with a visit to the Central Plaza Rattanathibet and the Maha Chesadabodindranusorn Bridge.

I was in a bit of dilemma. Chew was quite reluctant to unpack his bike, thinking that it would be a hassle to pack and unpack just for an afternoon's ride. And he had even requested me to loan a bike from Jenvit of British Cycle Square. It was a bit of trouble, but Jenvit had agreed to lend a bike. But to me the question was "Why bring a bike along and not use it?"

But after checking in, he changed his mind and unpacked his bike.... I believe he had no regrets doing it... after all we are on a bike-packing trip! 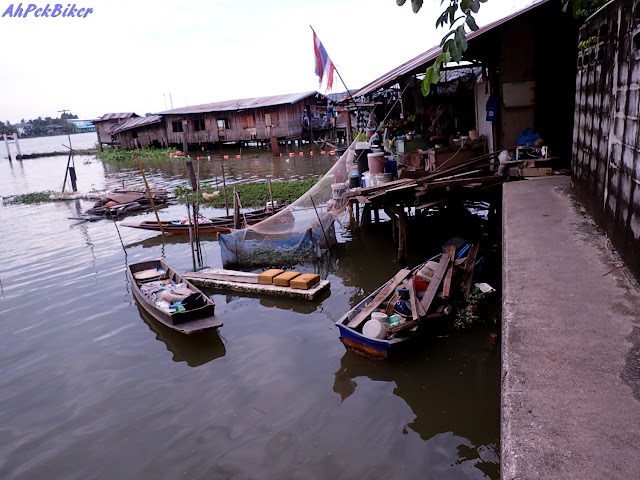 We started of our ride trying to get to the Chao Phraya riverside.... unsuccesfully...
At the far end of Rattanathibet Road, we could see houses on stilts with sampans floating nearby; there was a ledge about 700mm wide beside the wall of the Nonthaburi Maintenance Engineer Office. I pushed my bike along this ledge to recce while Chew waited... it was a dead end leading to on of the stilt-houses and no further. 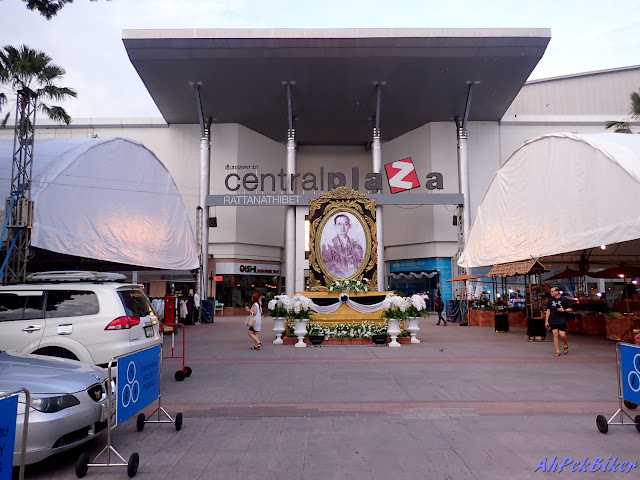 So we made a U-turn and headed the other direction. Traffic was heavy and we tried to ride on the kerbs but often it was blocked by parked cars, motor-cycles or other obstructions. On reaching Central Plaza Rattanathibet, a couple of temporary huge shades in front of the shopping mall attracted us. There was a bazaar ongoing, one was having clothing promotion so we naturally gravitated to the one on the left; one which was promoting food..... Oh Yeah! Just our kind of place! 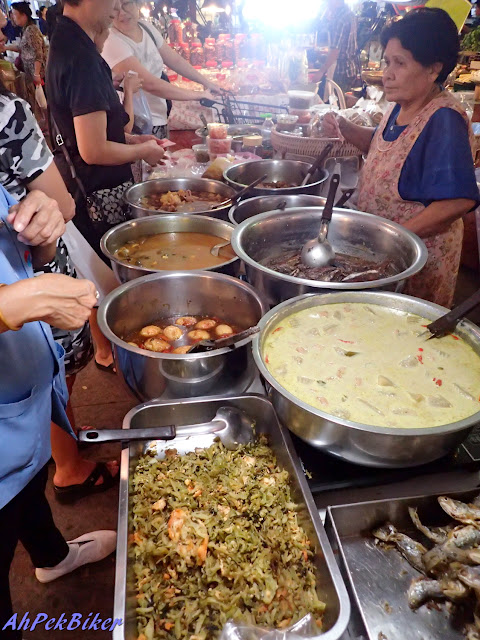 There were easily 30 stalls selling all kinds of Thai food; some ready to eat, others for take-away.

We had the following: 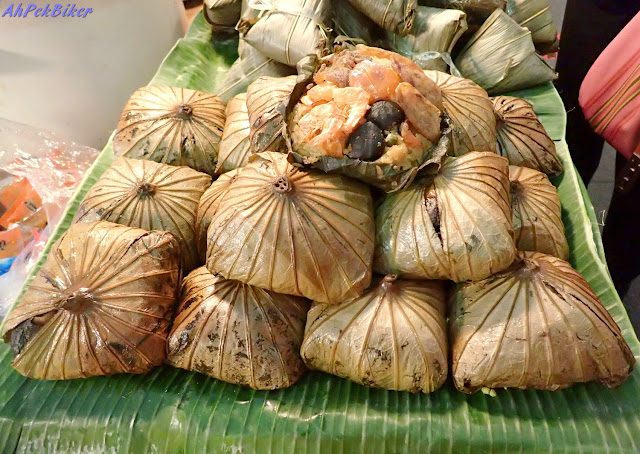 Lotus leaf wrapped dumpling rice - found this to be a bit try and not that tasty. 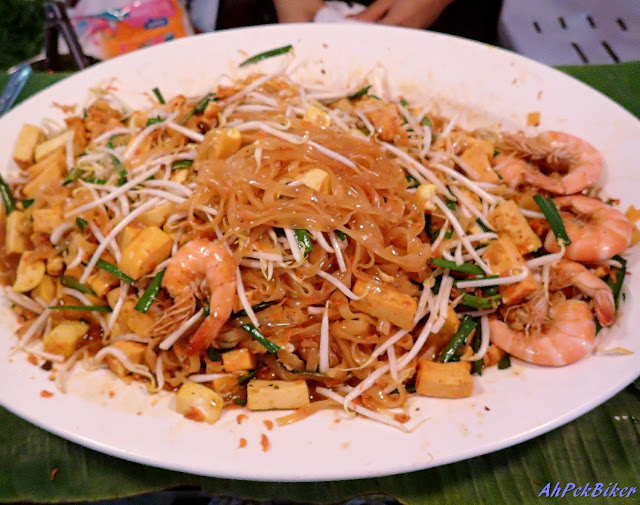 The ever favourite Pad Thai; this was quite okay. 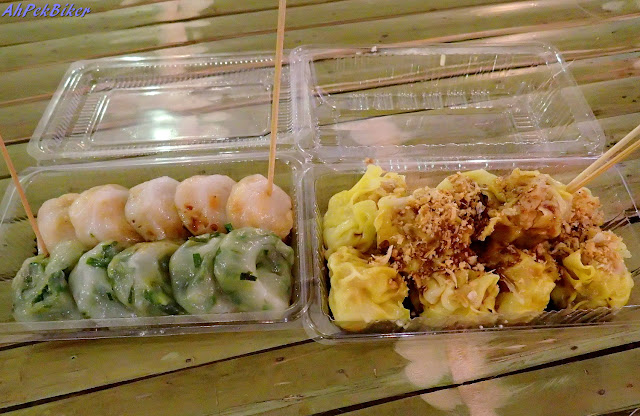 Steamed dumplings - on the left were turnip and leek dumplings, right were siew mai. These hardly had any taste, with the siew mai filling having more flour than meat. 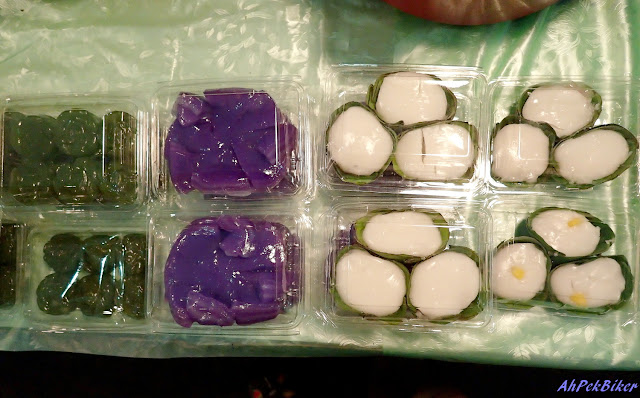 My favourites, Thai desserts with the renown Tab Thib Grot, wrapped in pandan leaves, on the right. These were all nice ..... 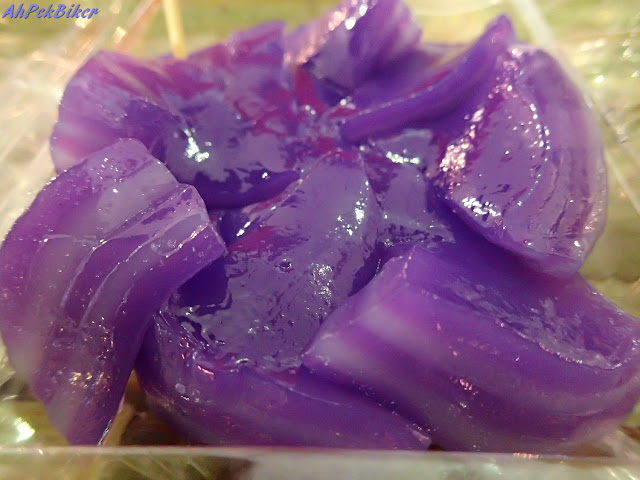 ... I particularly enjoyed the chewy biteyness of the purplish, layered cake which was not overly sweet. I think it's made from mung beans, hence its biteyness.
Overall, other than the desserts, the food were not that fantastic. I guess, these stalls at the bazaar were not the best of Thai 😵. 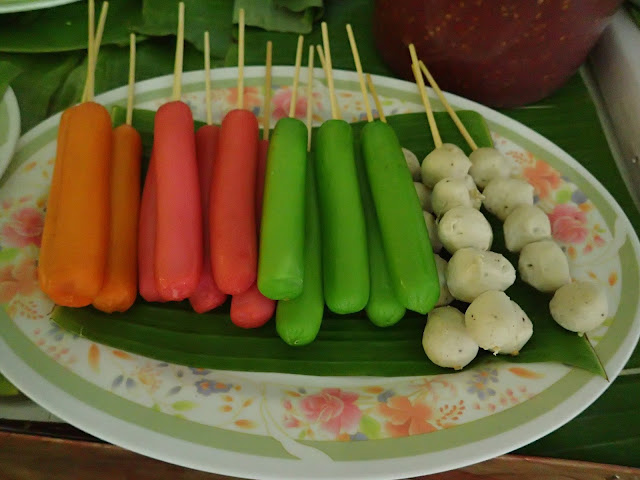 Thailand is colourful, but I refrained from eating these too colourful sausages. 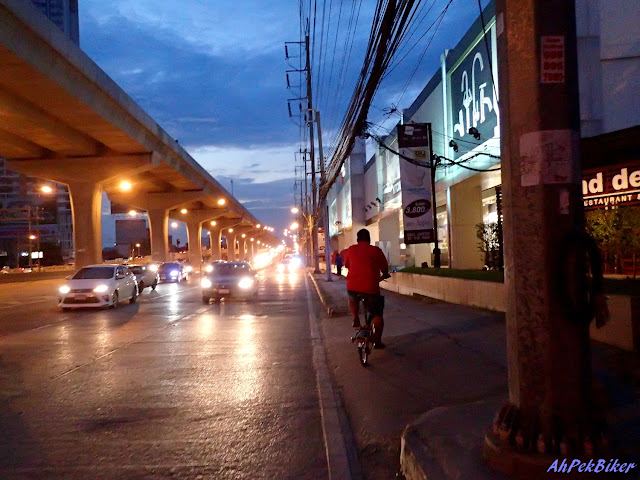 7:00pm - As we headed back, dusk had set in with a dim blue sky hanging over the glaring car head-lights and the yellow lights under the elevated highway. Oddly it mad a surreal photo, with Chew riding on the pavement against the traffic flow. 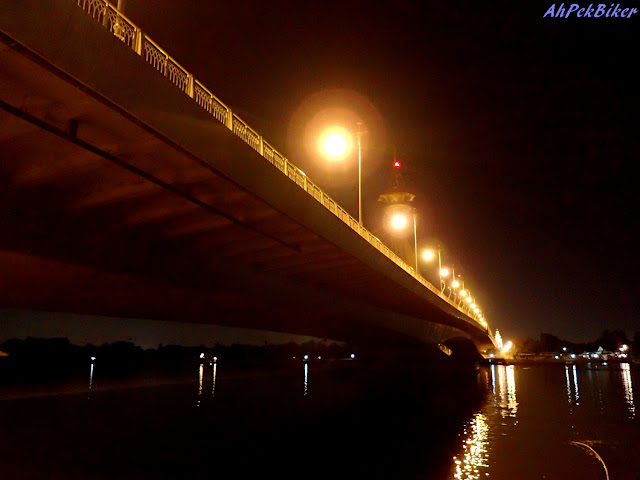 A staff at the hotel had recommended that we visited the Maha Chesadabodindranusorn Bridge. So on the way back we took a detour down Sanambin Nam, even at night the view of the bridge spanning across the Chao Phraya River was impressive. But how do we get to the top? Using the highway with it's complicated, curling approach ramps would be madness; the fast on-rushing traffic was just to dangerous! 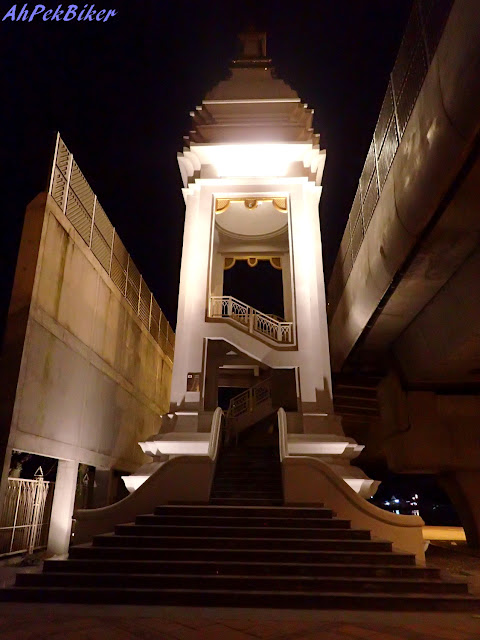 Fortunately, at four corners of the bridge were these stunning-looking staircase towers. We climbed up one, crossed over to the other side of the river. Then we climbed down another crossed under the bridge to climbed up again; crossed the bridge again and climbed down the fourth. 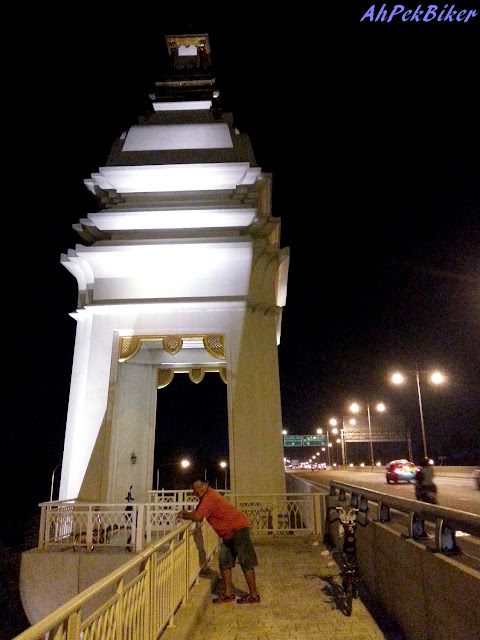 On top, the lighting played a nice shadow effect on these Thai-style towers ..... 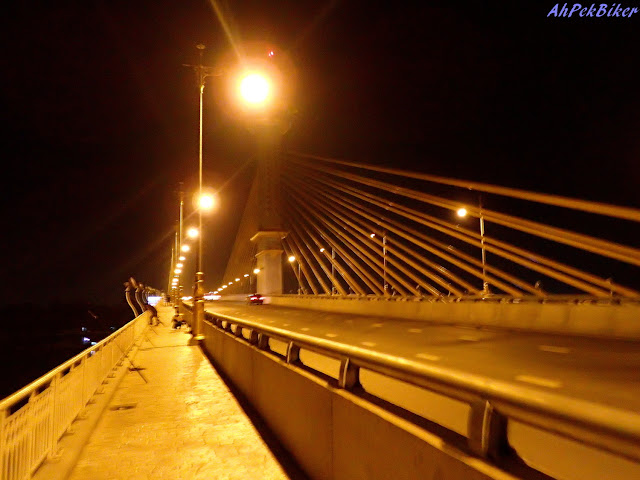 On both sides were pedestrian walkways that we could cycle along while admiring the giant cables of this cable-stayed bridge. There's a concrete divider that makes riding here safe. 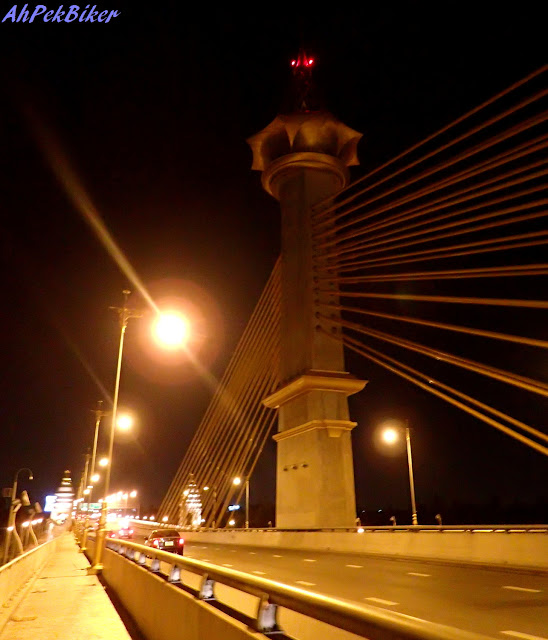 Near mid-span, the tall towers loomed above the road. We could just see the top that looked like lotus flowers 💓. 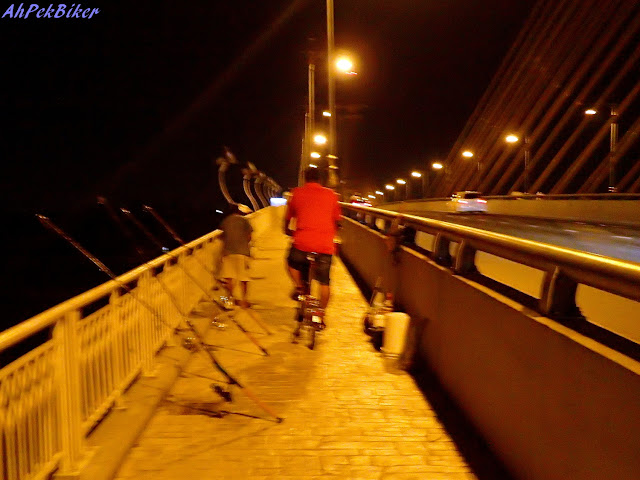 Here too, on the down-river side, were a few fishing enthusiasts casting their lines hoping for a good catch! 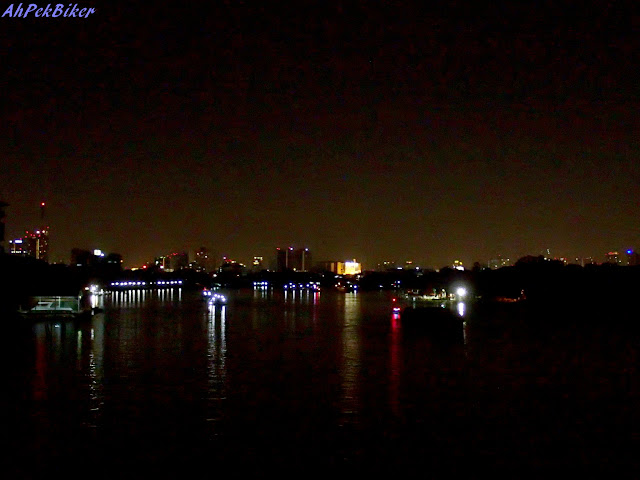 And a nice panoramic night view of Bangkok. 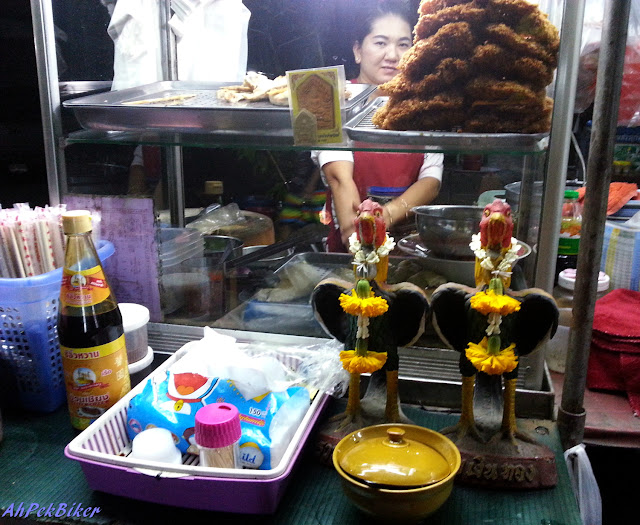 En-route back, we saw these road-side stall (in front of the Pizza Company outlet at Sanambin Nam. Looks good! Time to stop for supper!
There were a couple of stalls, one with chicken statues at the front and the other with cow statues, which made it easier to guess what they were selling - i.e. chicken & beef soup noodles - not much translation required! 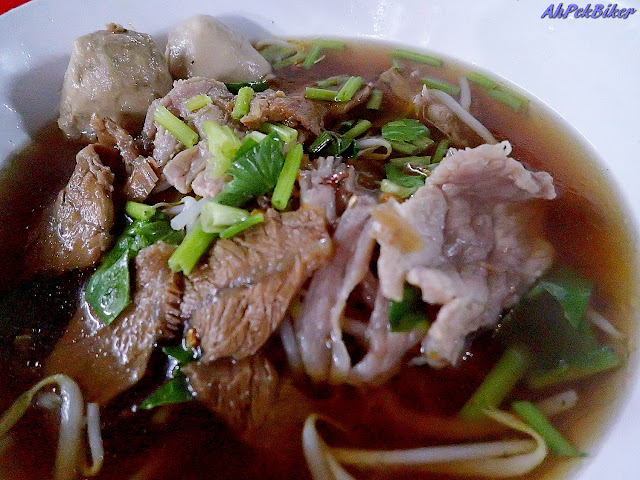 I had a bowl of chicken soup noodle while Chew went for the beef noodles with an extra order of beef soup (without noodles) to share. The beef soup were so good we ordered a second round. It was a good meal, one much better than those from the Central Plaza bazaar; shows that street food is better than those sold at the malls !YummY! 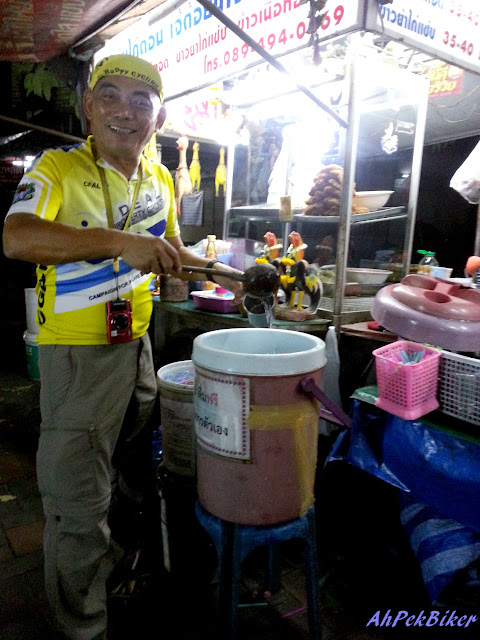 Most Thai stalls serve ice-cold water with no extra charge. This stall had a one with a cute coconut shell scoop!